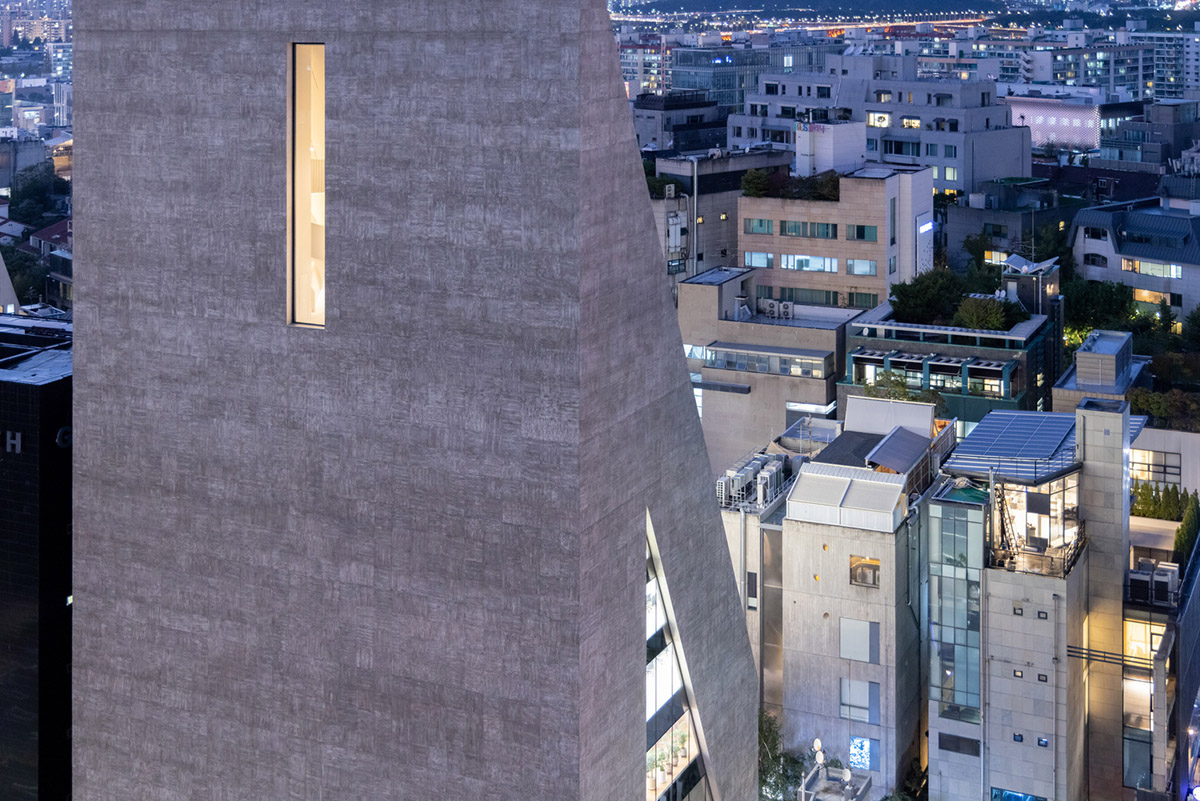 Located in the heart of Cheongdam Dong, one of the busiest commercial and luxury fashion epicenters in Seoul, the building opened to the public on 30 September, 2021.

Named ST International HQ and SongEun Art Space, it is the first project of the studio completed in South Korea.

Distinguished with its triangular concrete shape, the building aims to become "a cultural anchor" inviting the public in, expressing difference and openness despite, or rather because of, its hermetic street side. 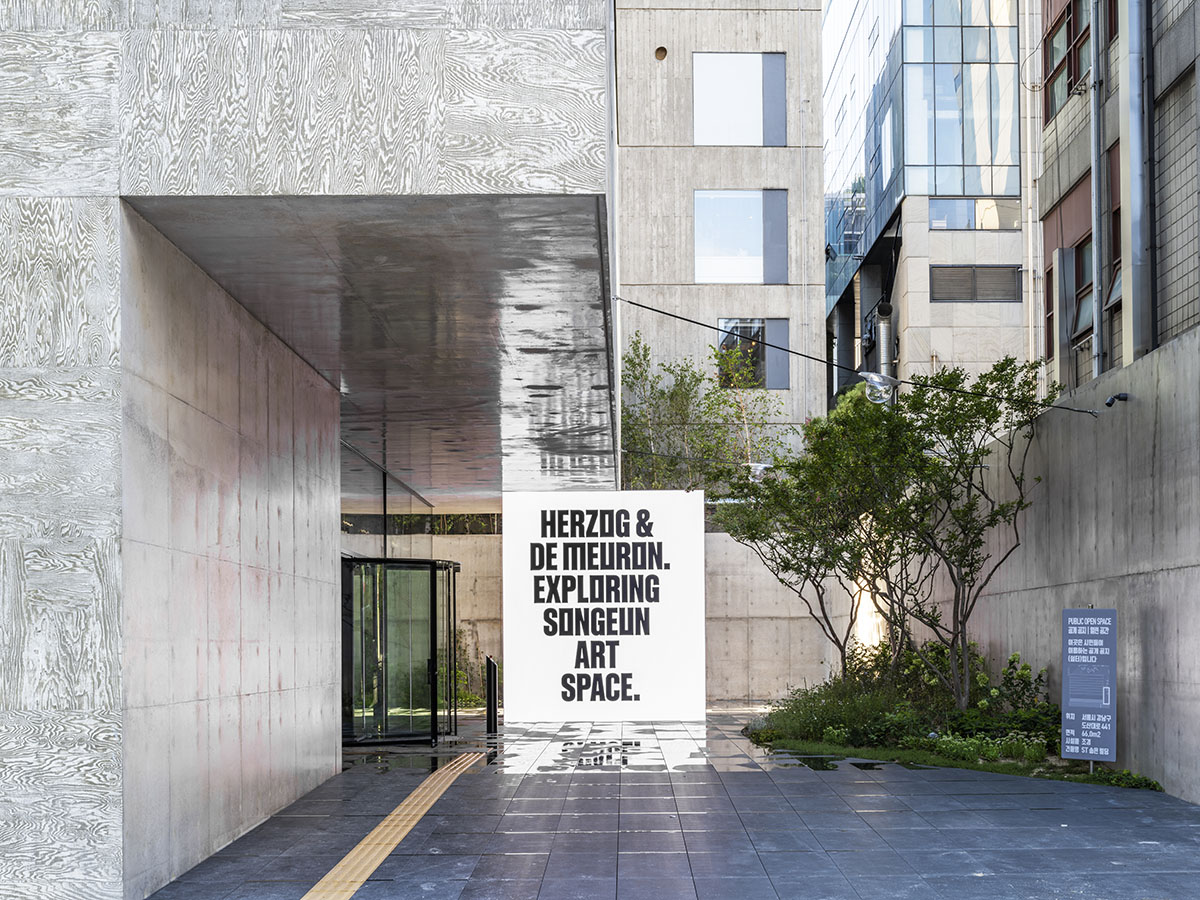 The 8,167-square-metre building consists of an experimental and unexpected mix of art spaces, offices, and public areas distributed above and below ground. Creating a new urban complex, the building invites the public to engage with contemporary art.

The building contains art studios and exhibition areas for the SONGEUN Art and Cultural Foundation, a non-profit organization established in 1989 – together with headquarter offices for ST International. 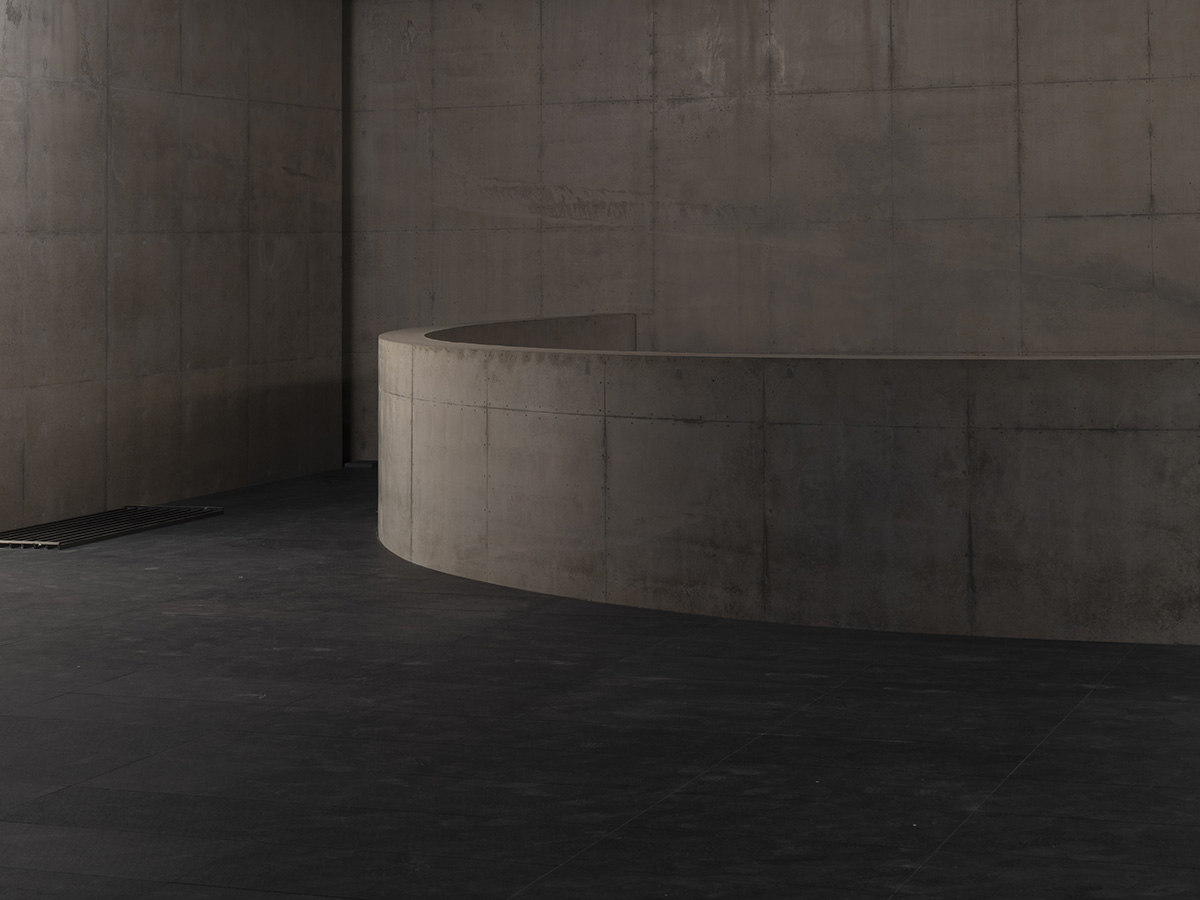 The main exhibition, titled Herzog & de Meuron. Exploring SongEun Art Space, showcases the works of Herzog & de Meuron and international artists with whom the architects have had longstanding collaborations, alongside Korean artists and designers who have worked with SONGEUN Art and Cultural Foundation in the past.

Herzog & de Meuron. Exploring SongEun Art Space will be on view until November 20, 2021.

The second part of the exhibition will celebrate the 21st edition of the SONGEUN ArtAward, which is expected to open in December 2021 and will be showcased until February 12, 2022. 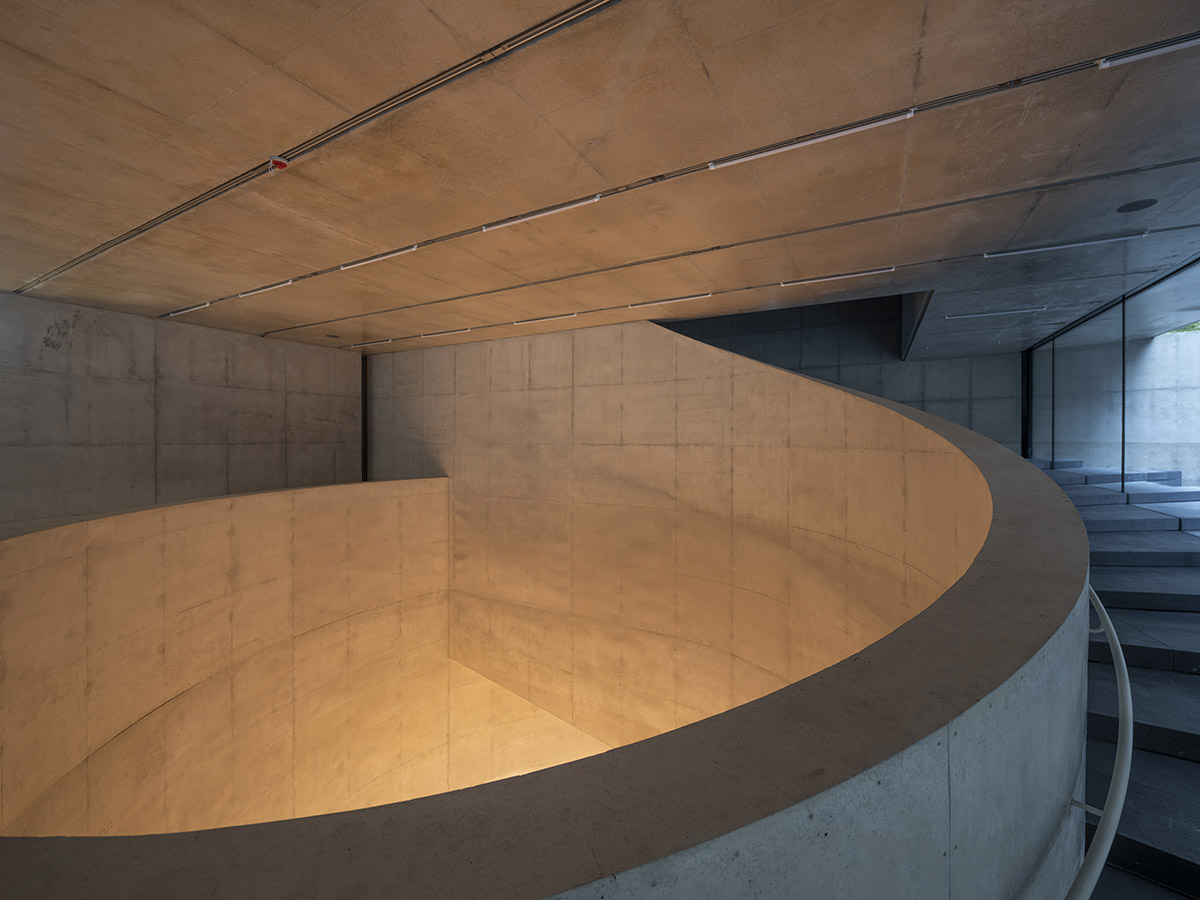 Herzog & de Meuron was commissioned to design the new SONGEUN Art Space in 2016, the ambition for the project was clearly set: to create a cultural anchor that invites the public and broadens the exposure of Korean artists to the international contemporary art scene.

By offering non-commercial art spaces within one of the most commercial areas of Seoul, the project aims to strengthen SONGEUN's presence and significantly contribute to the city’s cultural topography and diversity. 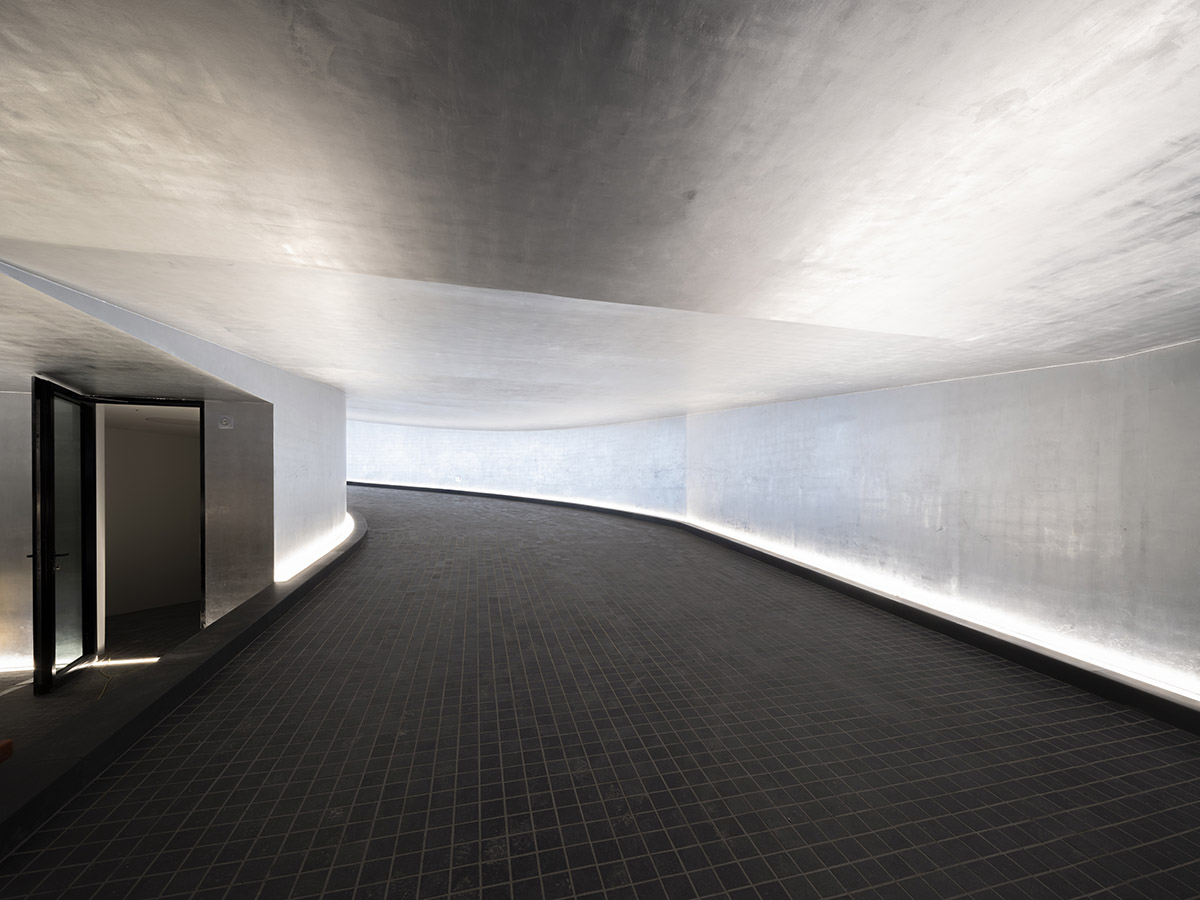 For the project, Herzog & de Meuron is inspired by distinct elements of local context, cultures, and environments. Creating a sharp triangular volume, the volume stems from the envelope specified for the site, while respecting the permitted volume and maximizing the allotted floor area.

Featuring a precise geometry, the building rises up among low-rise buildings where the zoning allows for higher density towards the main street.

The project is catalyzed by the area’s rapid transformation and densification, a myriad of volumetric strategies responding to various plot regulations sit along the street front.

By offering a tall front facade, this façade looks at the main street and hosts the building’s core, while a low back facade faces the garden where a more intimate scale defines the surrounding neighborhood. 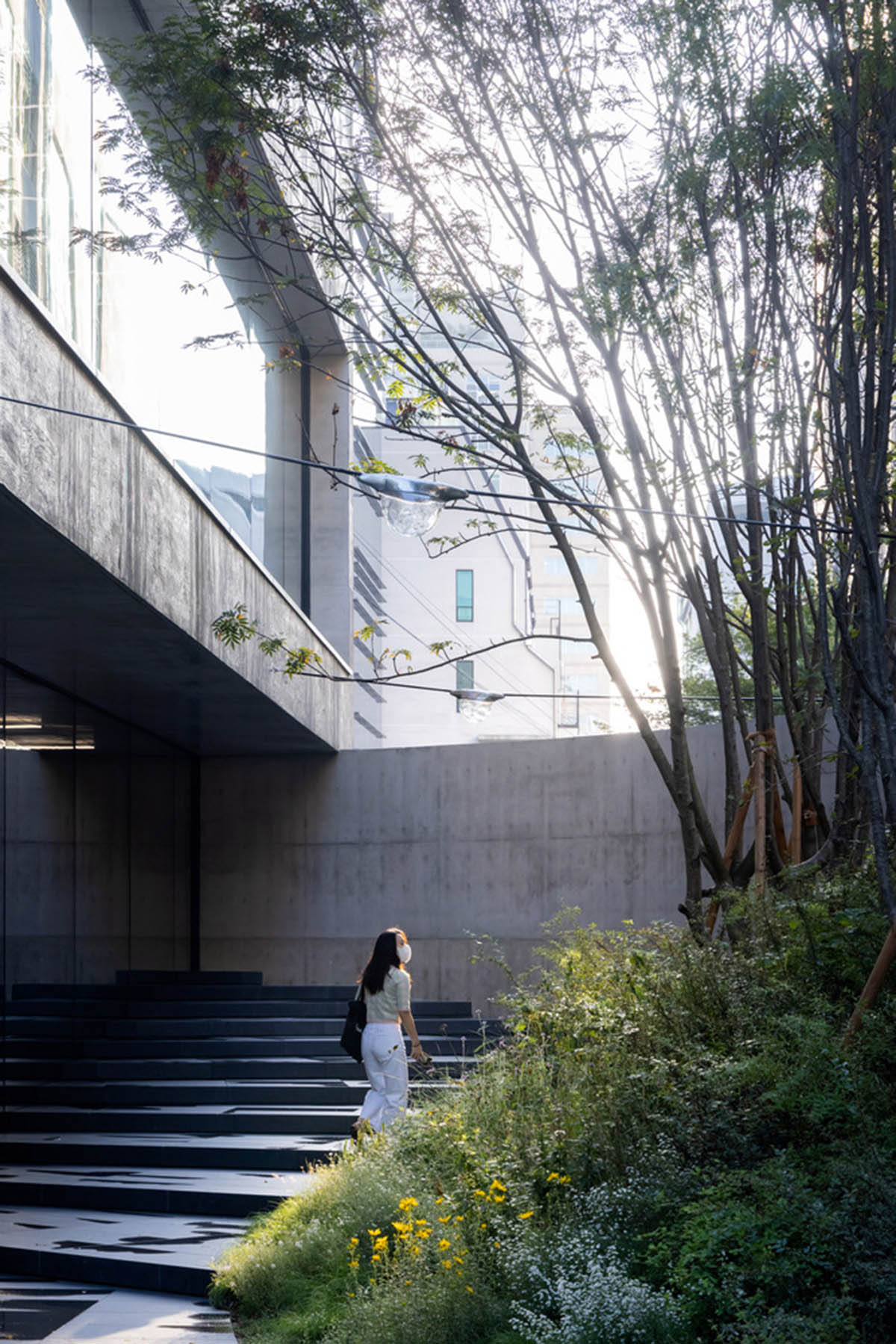 Having 11 stories aboveground and 5 floors underground, the completed building comprises over 8,167 square meters.

Described as "a cultural anchor open to the city", according to the studio, "the building expresses difference and openness despite, or rather because of, its hermetic street side." 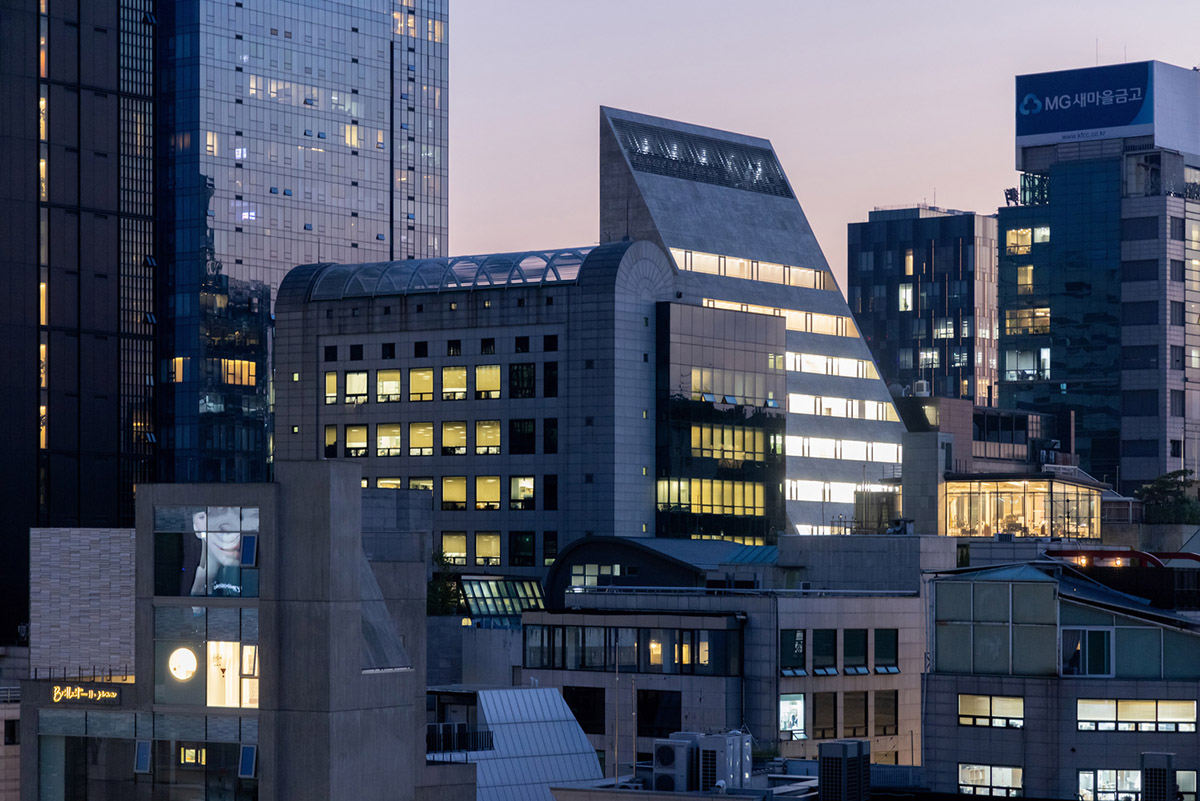 "A cut out of the base invites visitors from the street to the main lobby and the intimate garden, open to the public at all times. At the entrance, a column wrapped in a seamless LED screen acts as an attractive lantern announcing current shows and a further place to present artistic content."

On the west side of the building, the design of car ramp is treated as a sculptural volume. The curve of the descending ramp carves an opening in the ceiling of the underground exhibition space, connecting this sunken gallery to the activity, sound, and light at street-level. 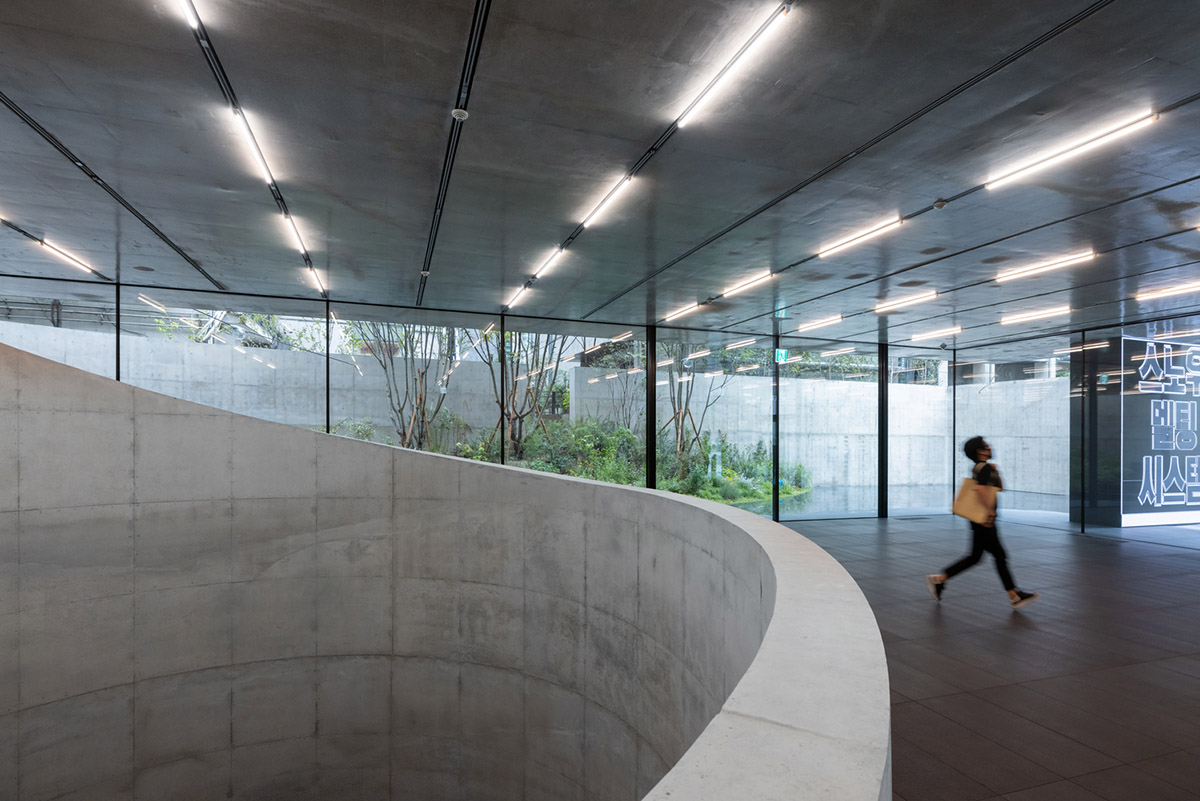 With its concrete walls, this cave-like space contrasts with the reflective finishes of silver leaf lining the ramp’s interior and parking space beneath.

The ramp spirals around a triple-height void and defines the geometry of the grand staircase which acts as both a threshold and auditorium space for screenings and lectures, leading to the second-floor galleries. An experimental and unexpected mix of art spaces, offices, and public areas unfolds above and below ground, creating a new urban complex that invites the public to engage with contemporary art in Seoul. 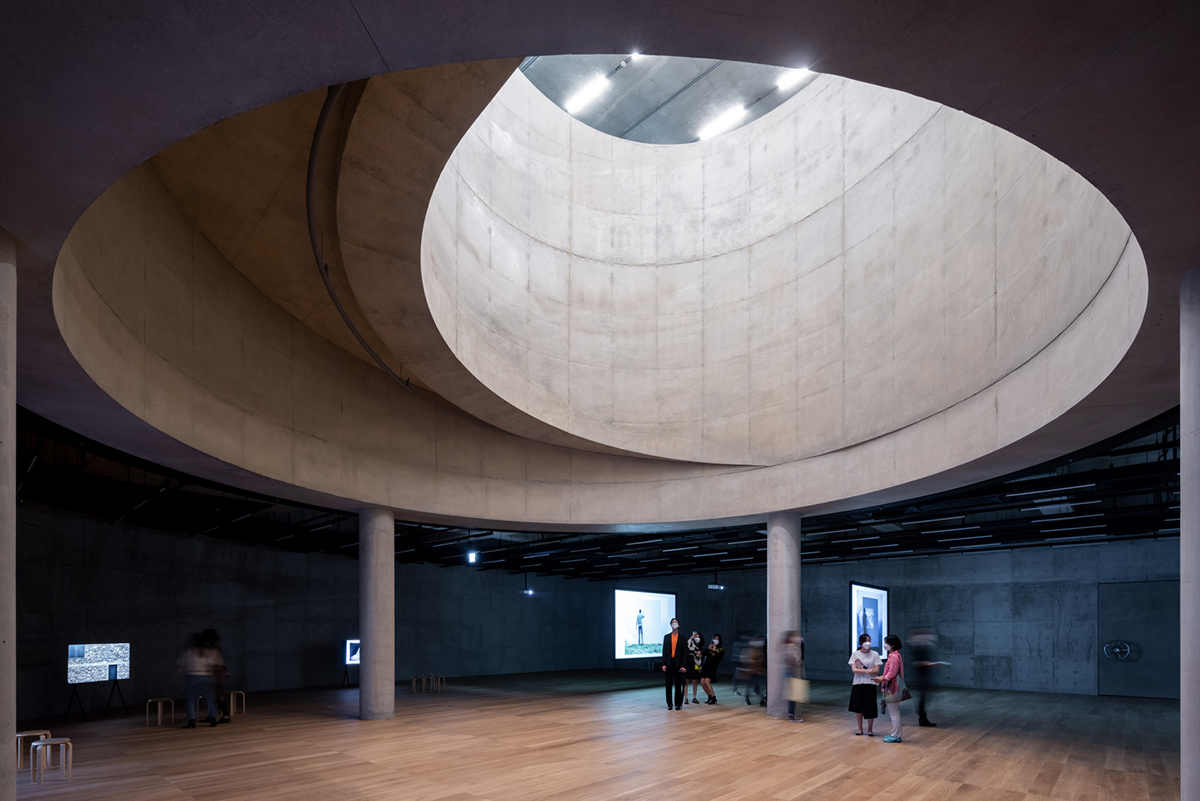 Enhancing the facade’s continuous surface, the building is cut by only a few defining apertures. Two tall vertical windows puncture the south facade and create framed views of the city.

A triangular opening spans between levels 3 to 8 on the east, while the rear is almost completely glazed behind a layer of balconies that bring light and air into the offices. 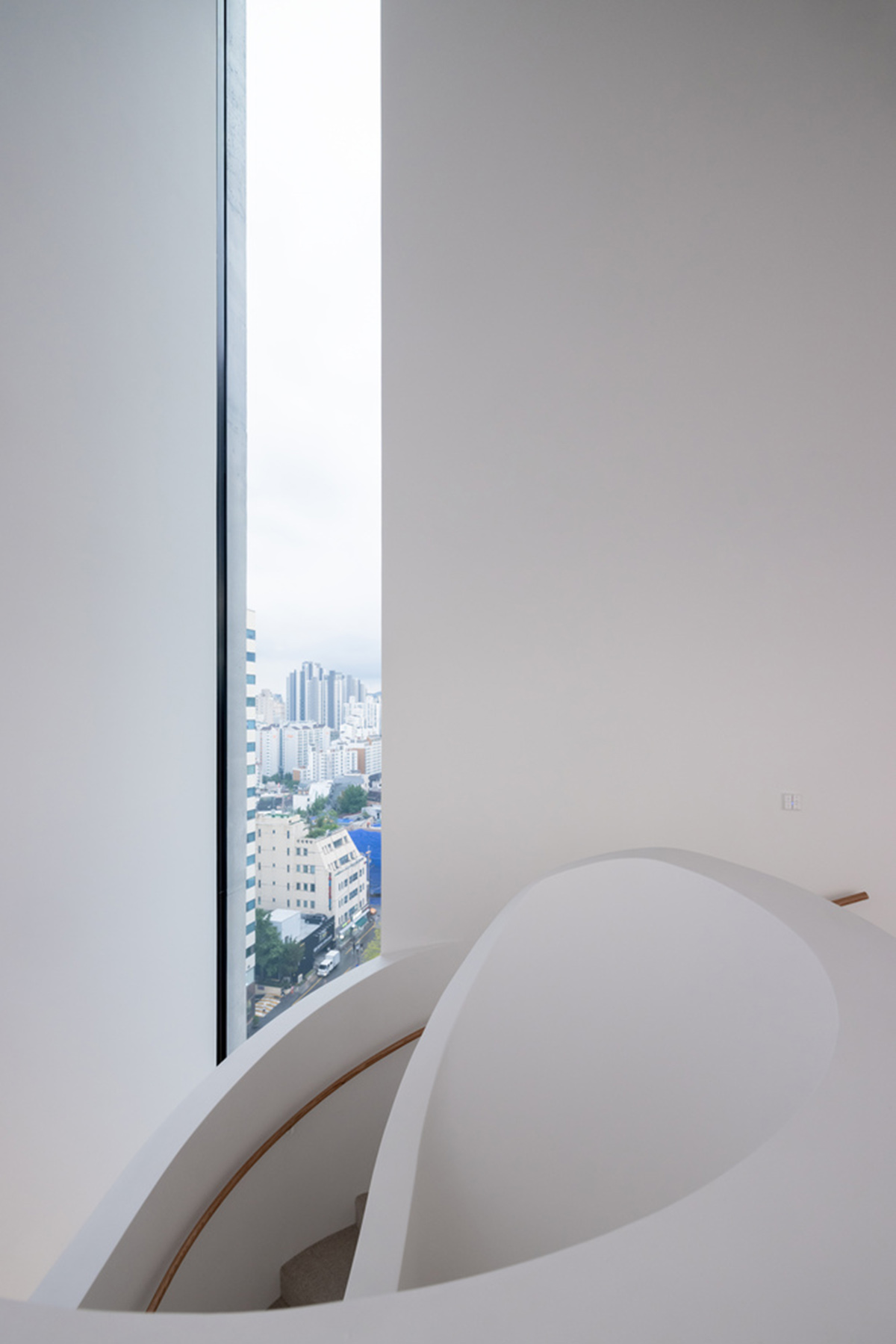 The concrete mass not only carries the entire structure but also defines all space and ornamental surfaces. Using larch plywood boards rotated in a 1-by-1 meter grid, the concrete facade is imprinted with wood grain patterns and expresses the meaning behind the name SONGEUN: “Hidden Pine Tree”.

This unique texture invites the eye and hand to explore its different qualities, bringing the building’s urban presence down to a tactile human scale. 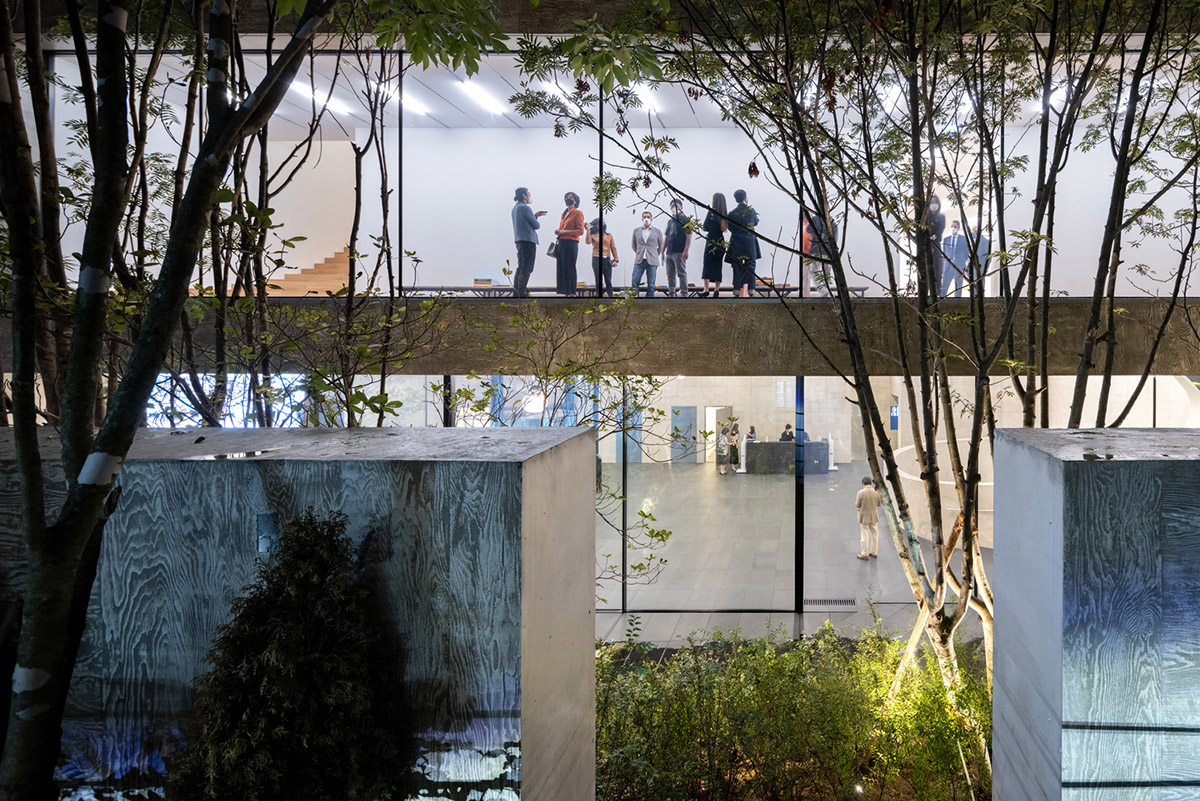 The new space will continue the mission of the Foundation to support young talented artists in pursuit of becoming a hub of culture, creativity and inspiration, connecting the public with art through prolific exhibitions and programs. 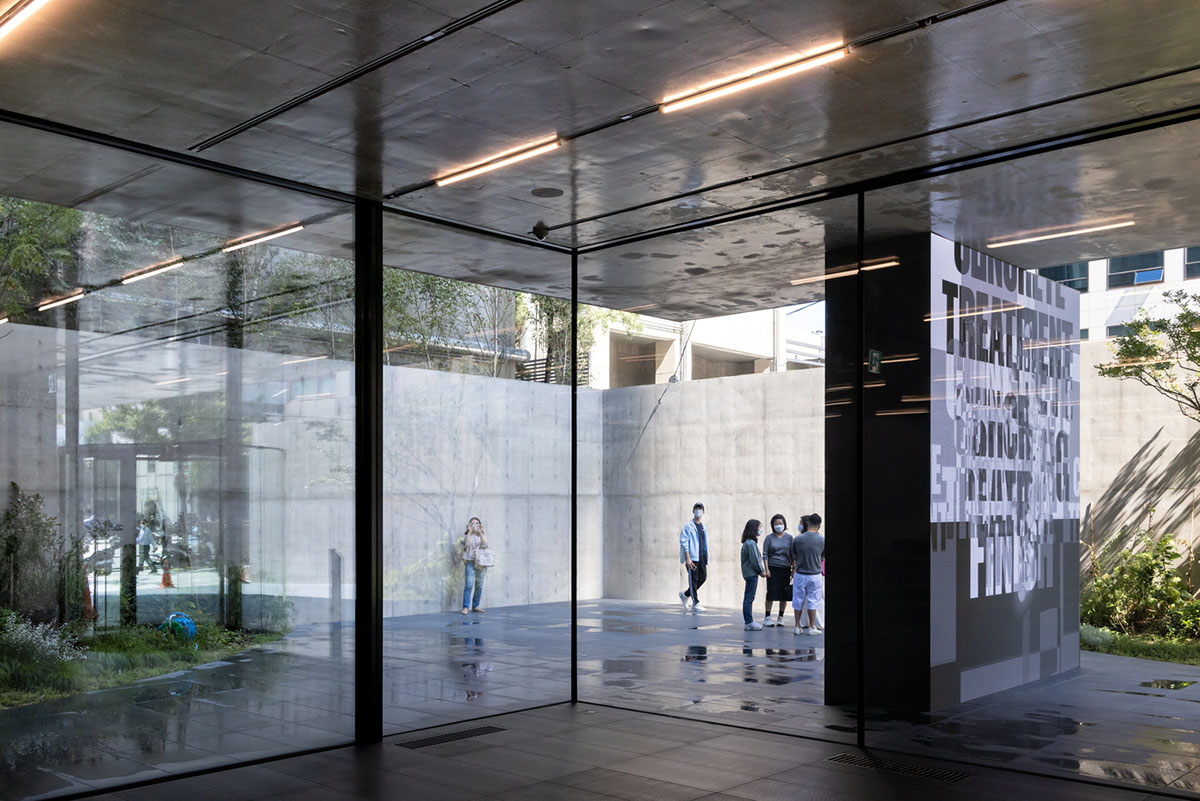 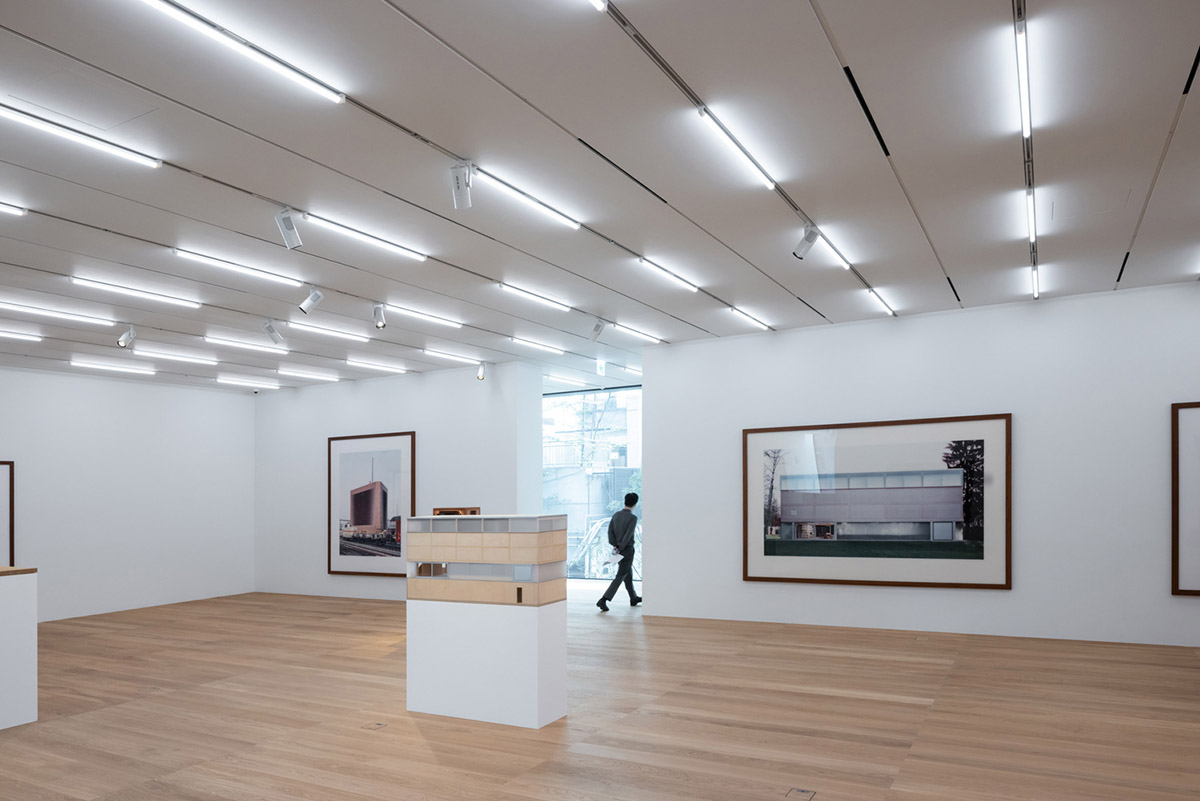 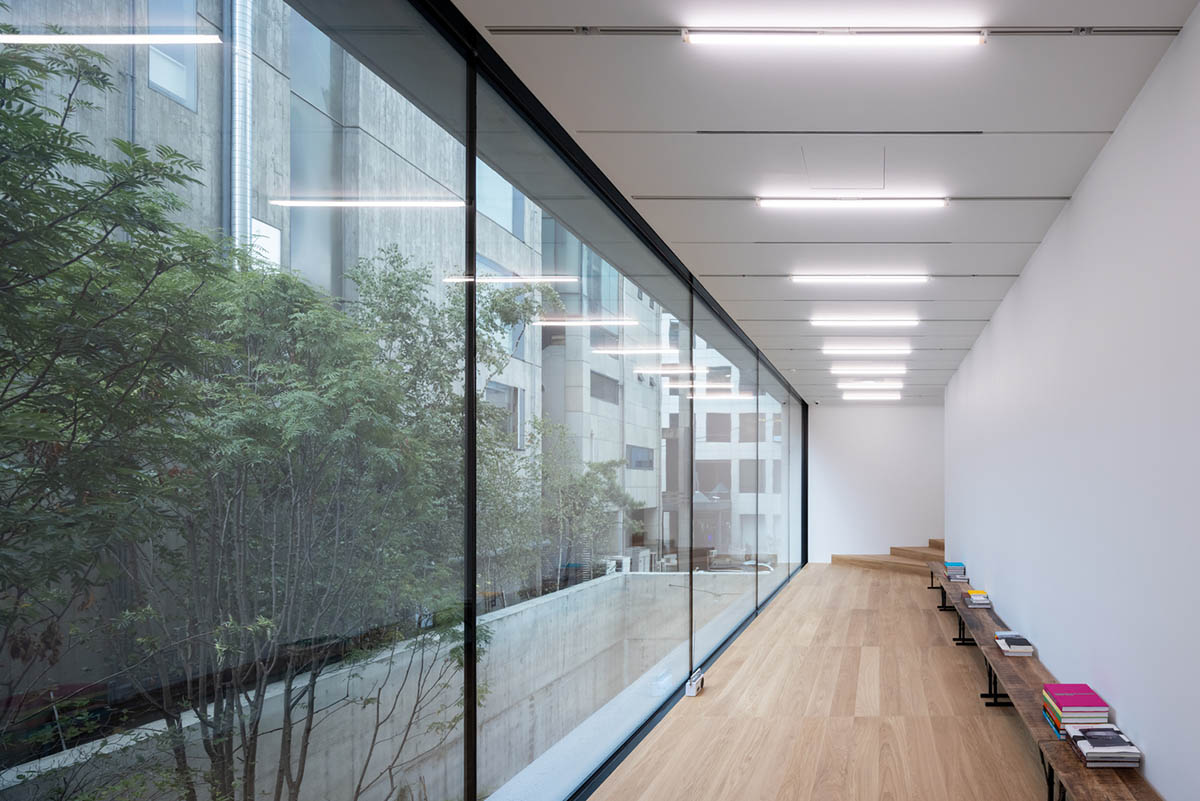 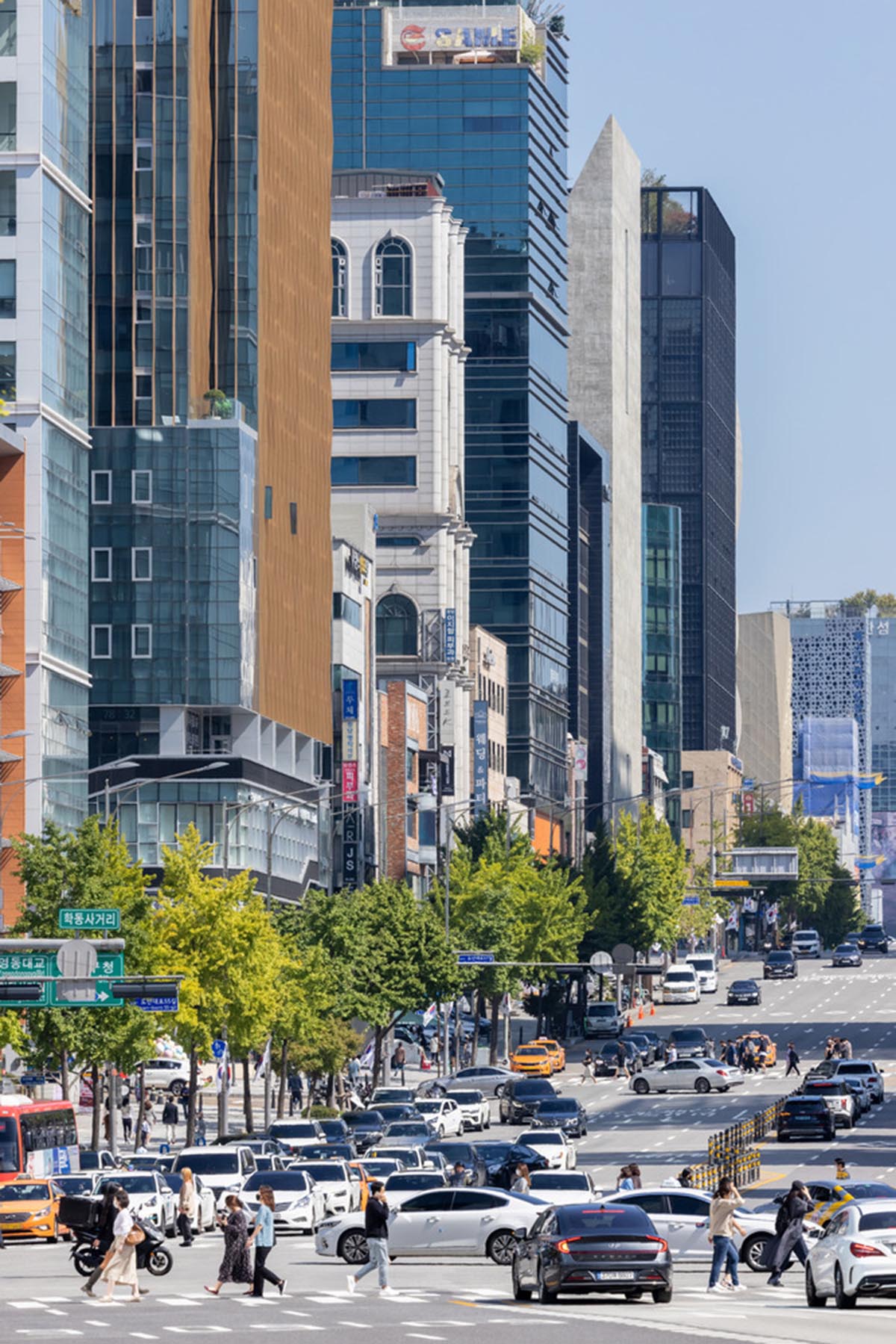 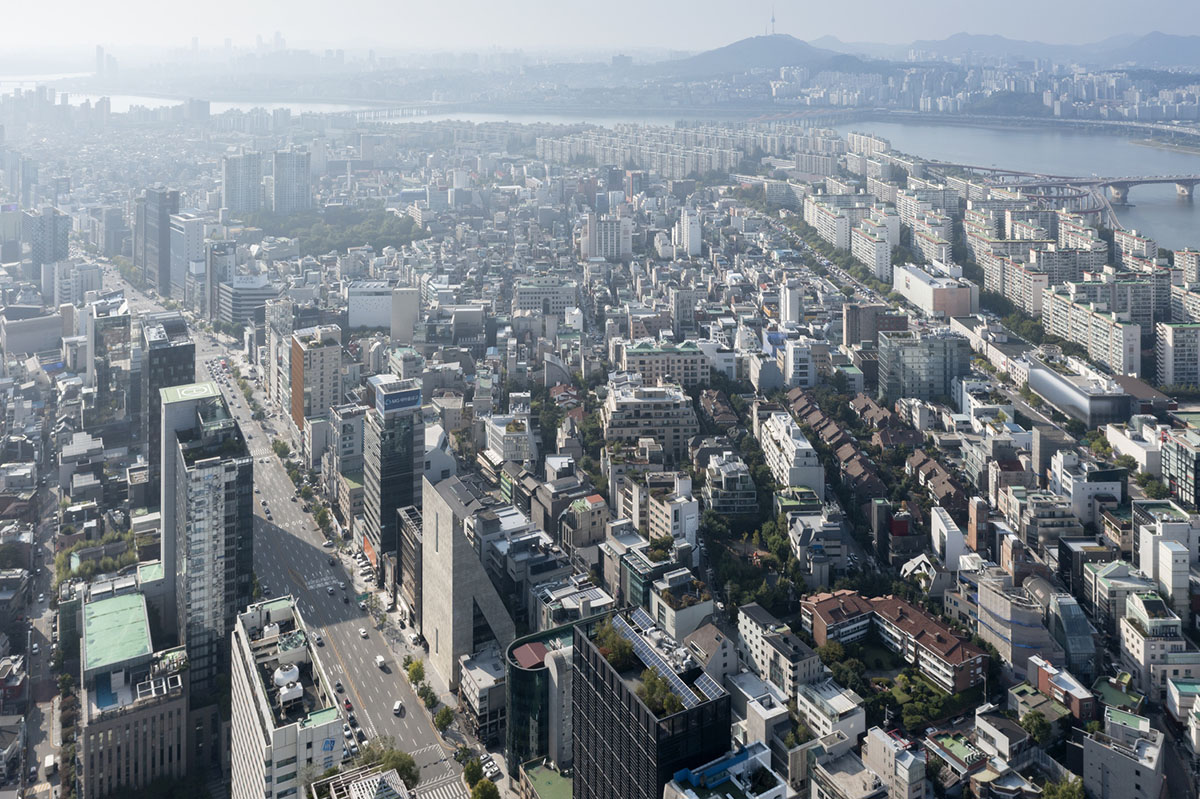 Recently, Herzog & de Meuron completed a new extension for the MKM Museum Küppersmühle in Duisburg, Germany. The studio began construction on the transformation of power plant in San Francisco.