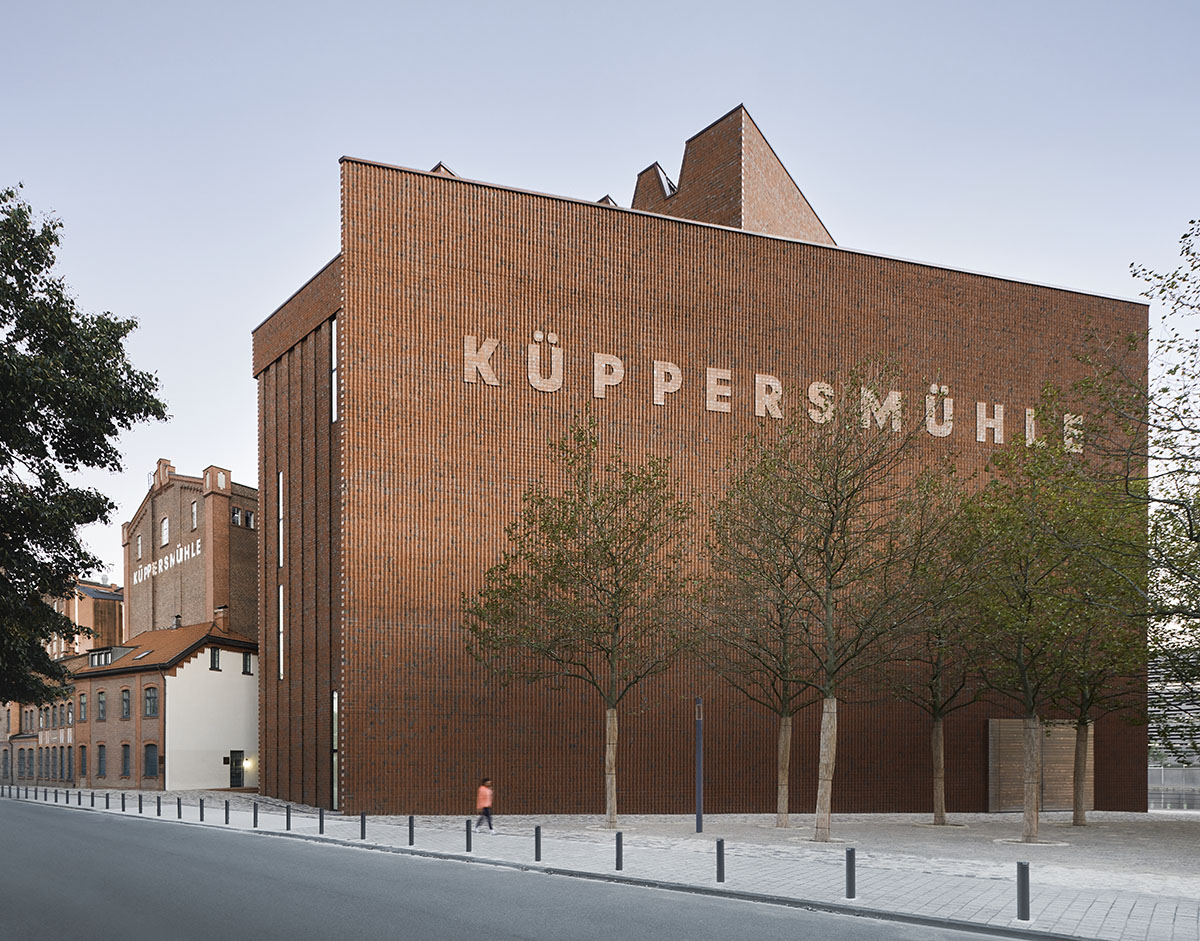 The new museum will open its doors to visitors once again on September 25, 2021 after a four-year construction work on Germany's Ruhr region.

The 5,000-square-metre museum will present works from the Ströher Collection across an additional 2,500 square meters area, with its striking red brick façade and white cubes inside, the MKM will become a central venue for German and European post-war art.

On display are some 300 works, spanning the immediate post-war period to the present day. The new extension comprises three structures of varying height form a new main edifice, which rounds off the row of buildings flanking the harbour basin. 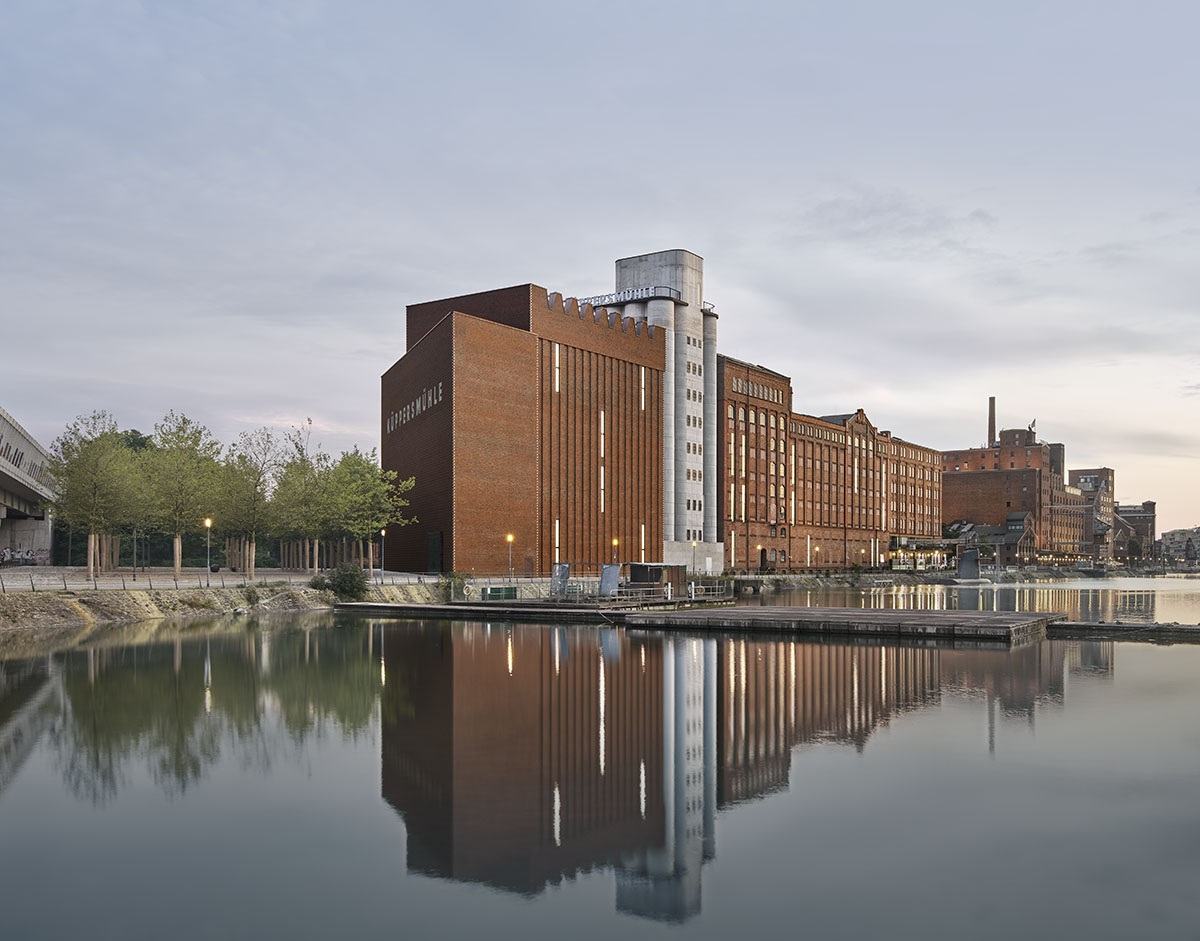 With its striking red brick façade, the new extension culminates in a square with 35 newly-planted sycamore trees.

Commissioned by MKM Stiftung, the project has been enabled by the privately run MKM foundation, initiated by the collectors Sylvia and Ulrich Ströher, who have also collaborated instrumentally in the planning and hanging of the exhibition rooms. 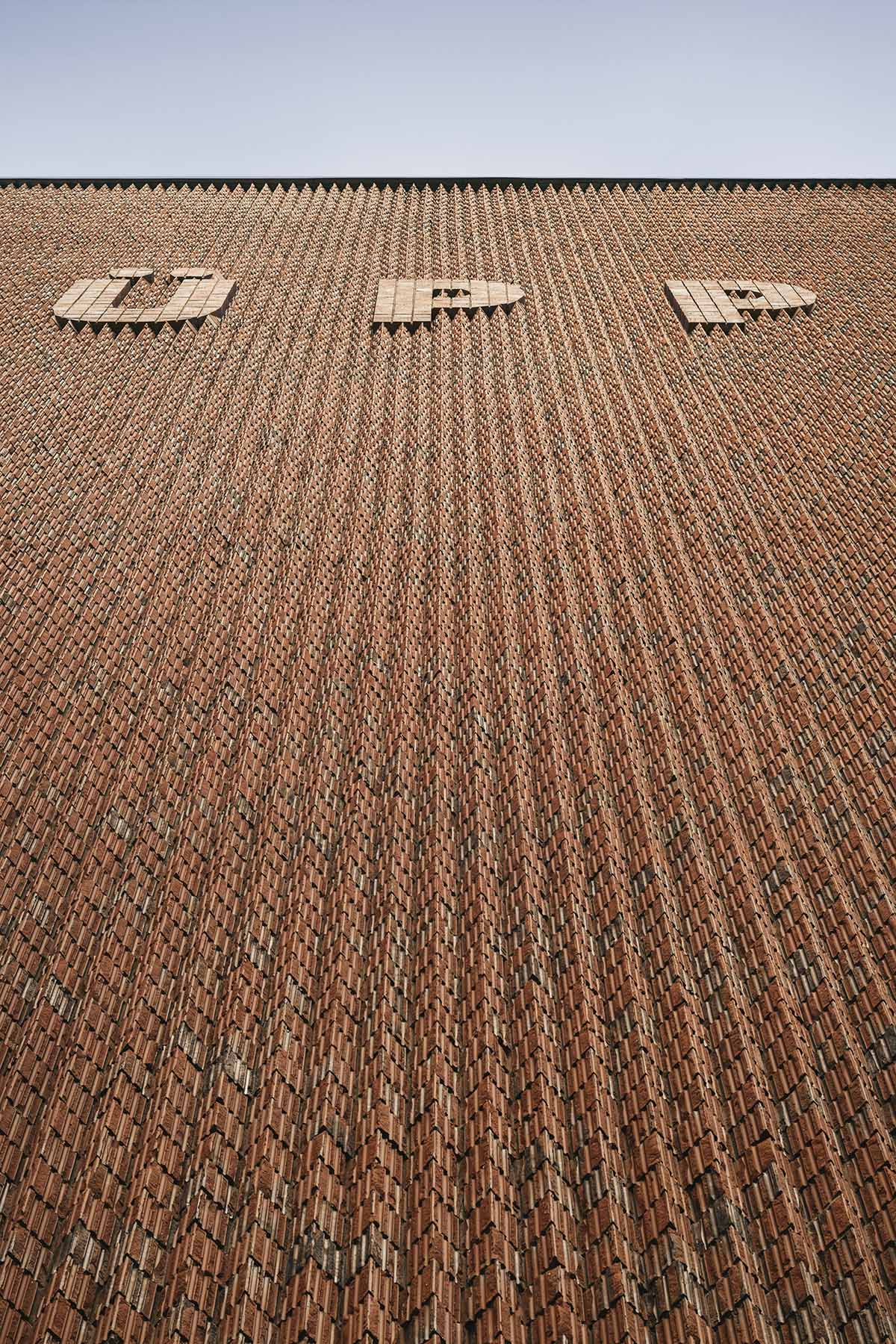 The Museum Küppersmühle (MKM), a project by Herzog & de Meuron dating from 1999, was the first milestone in the transformation of the Inner Harbour into an attractive focus of urban life. As a museum, the former mill, with its historic brick elevations, became the centre of a new, high-grade, multi-use inner-city location.

Since 1999 the Küppersmühle has housed an art museum, run by the Stiftung für Kunst und Kultur e.V. (a registered cultural association in Bonn), that contains one of the finest collections of German art from the 1950s to the present. 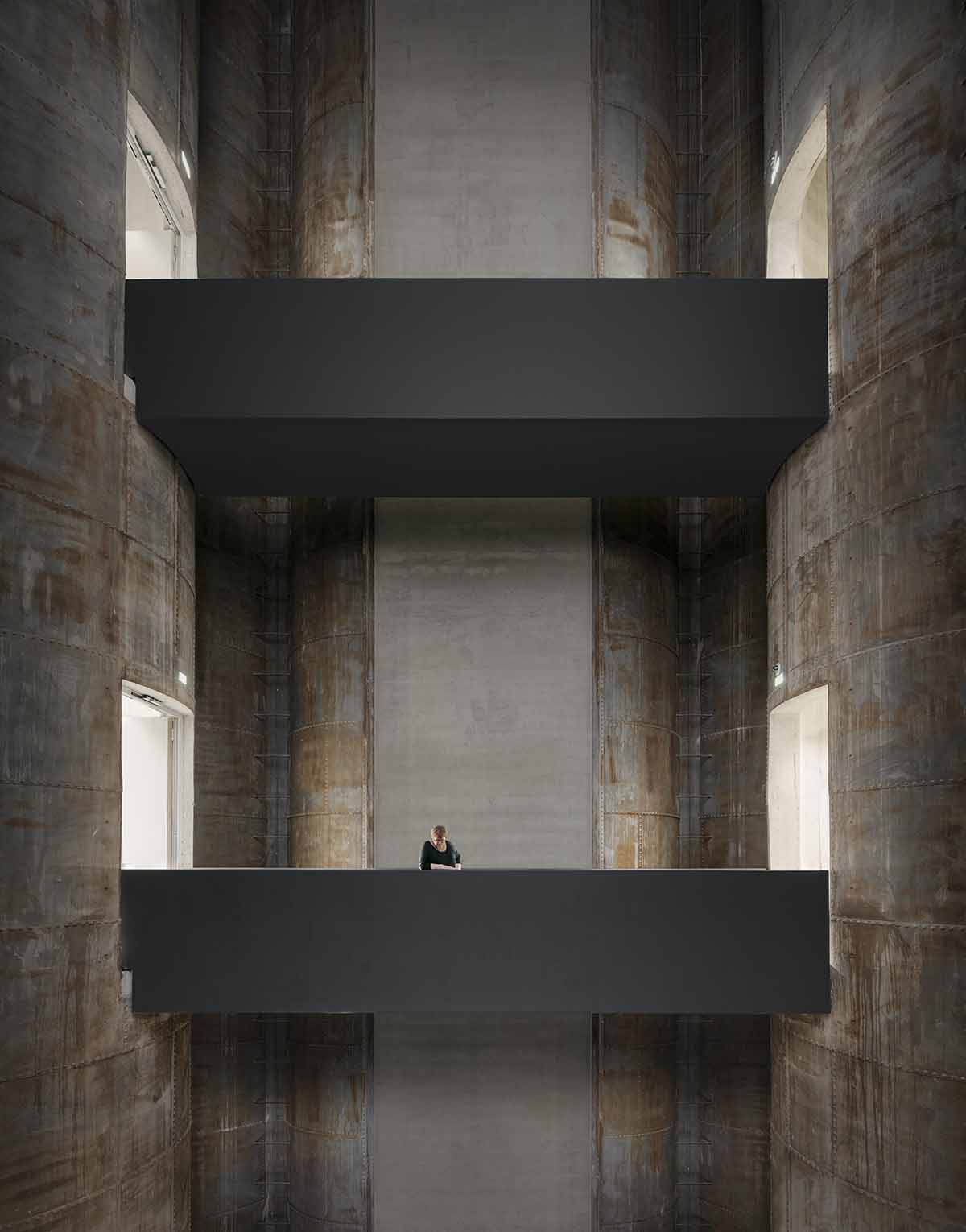 An extension to accommodate the collection was to be erected in 2008 on top of the silo towers. Faulty work by the steel-working company involved, and the company’s subsequent insolvency, meant that the steel-frame construction could not be installed.

Construction work ceased and the project was abandoned owing to financing problems encountered by the client, the real estate company GEBAG. The building complex became the property of the Ströhers. In 2013, the extension project was activated with the Ströher family as clients.

The five-storey museum features a sequence of 36 brightly-lit and clearly-structured collection rooms that provide a spacious setting for the exhibited art works. 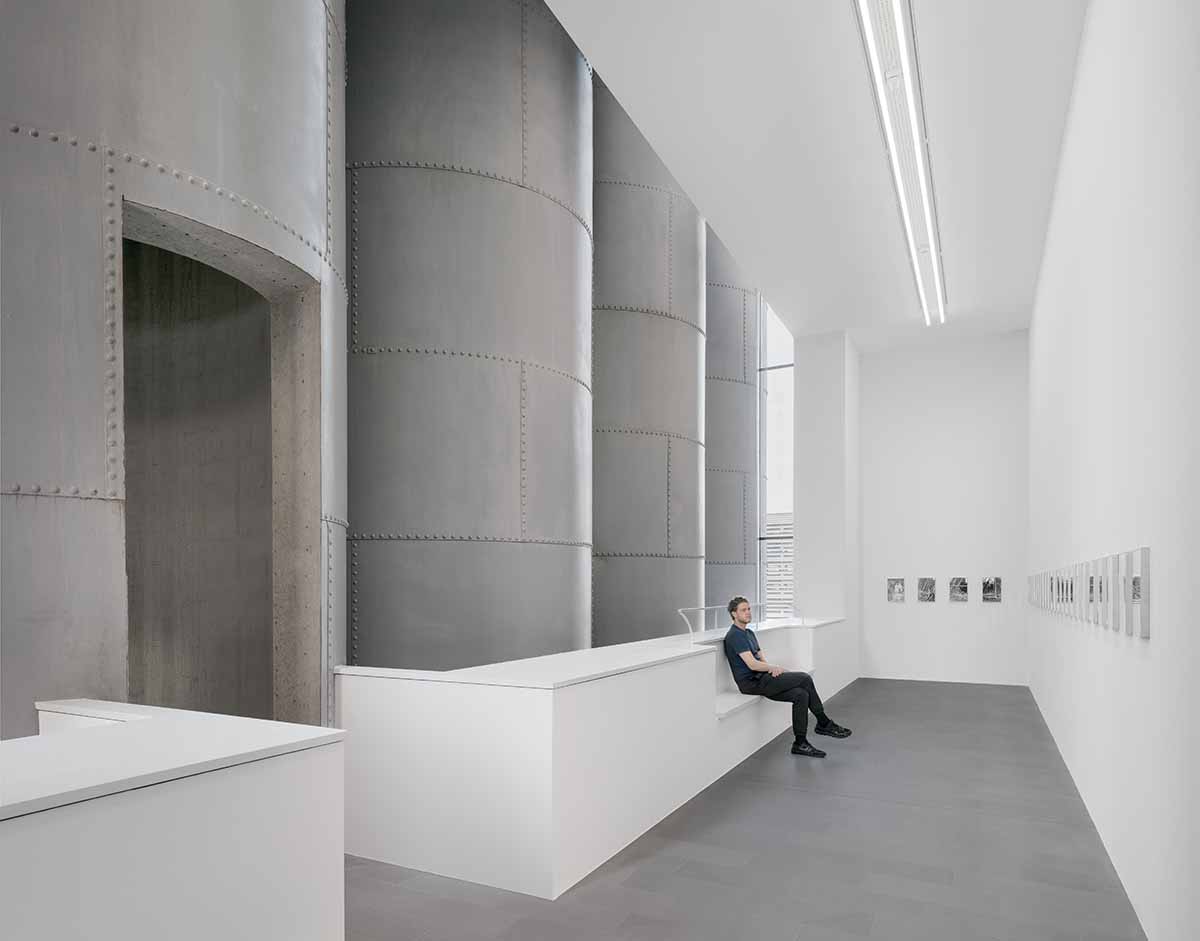 As part of the extension construction, Herzog & de Meuron renovated the historic silos and integrated them into the new structure, from which bridges on the first and second upper-levels connect the new and existing galleries.

The team preserved the silos as an industrial monument, both in terms of appearance and original material. A viewing platform on top of the silos is accessible to the public, depending on the time of year and weather, and offers sweeping views of the Ruhr region. 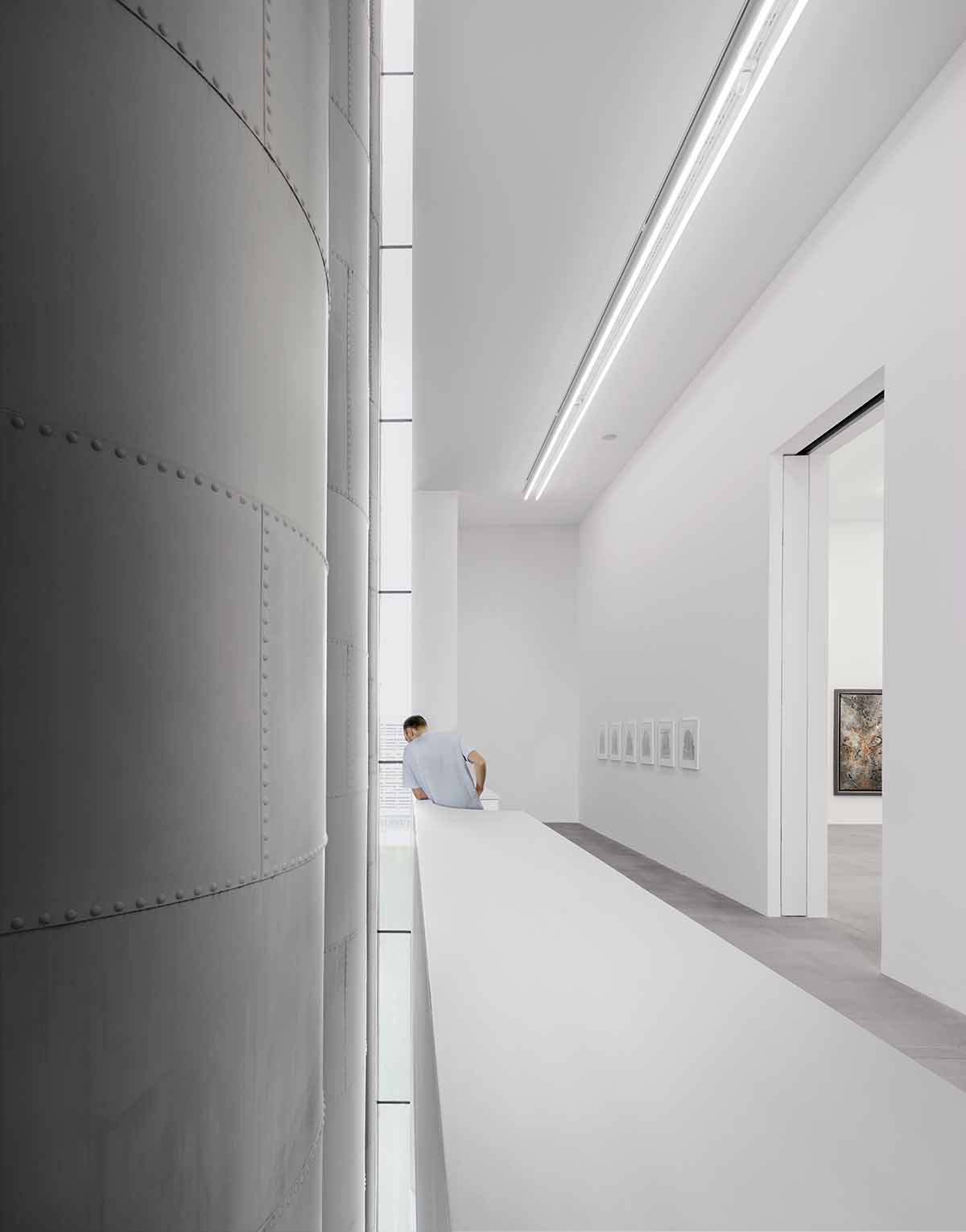 "Consequently, the new structure completes the existing museum and harbour basin in a visually appropriate way, and forms a suitable conclusion to the row of buildings along the harbour basin."

"The new project constitutes an integrating and complementary architecture," the firm added.

The focus in the new building will lie on the Informel and abstract works of German artists, augmented by several positions of European post-war art. 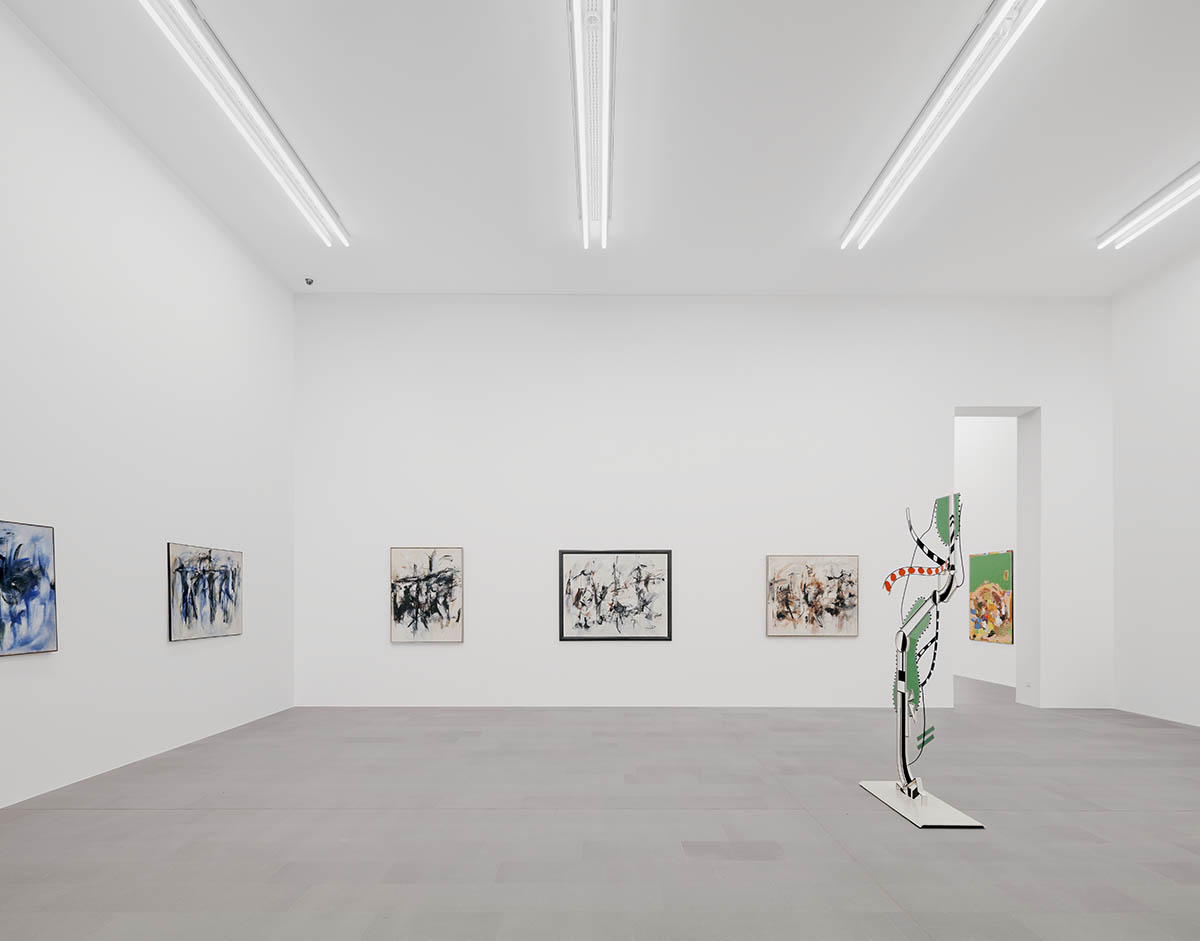 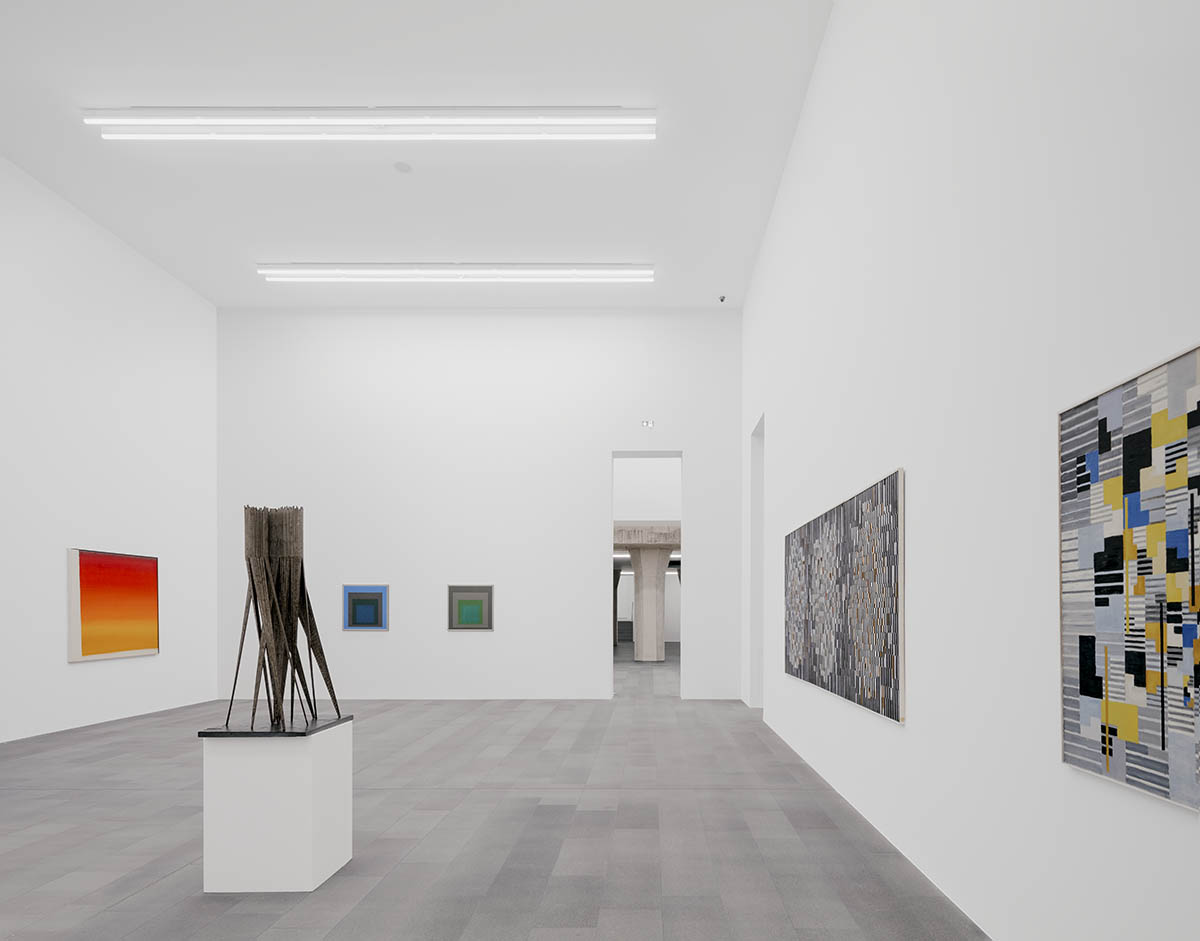 After a careful feasibility study undertaken by Herzog & de Meuron, the team explored the potential of the site under current conditions.

As the firm explains, "the original idea of an illuminated cube balanced on the silo towers and visible from afar has been jettisoned. Instead, we propose to erect a building whose dimensions and materials accord with the sequence of historic brick structures lining the dockside."

"The new structure thus completes the existing museum complex in a visually appropriate way and forms a suitable conclusion to the row of buildings along the dock. At first glance it might seem as though the new building had always been there."

The new structure, comprised of three parts, has a height of approximately 33.5, 30.5 and 27.5 metres respectively. In terms of mass, height and materials, the design takes cue from the existing buildings, continuing them and rounding them off to form a harmonious whole. 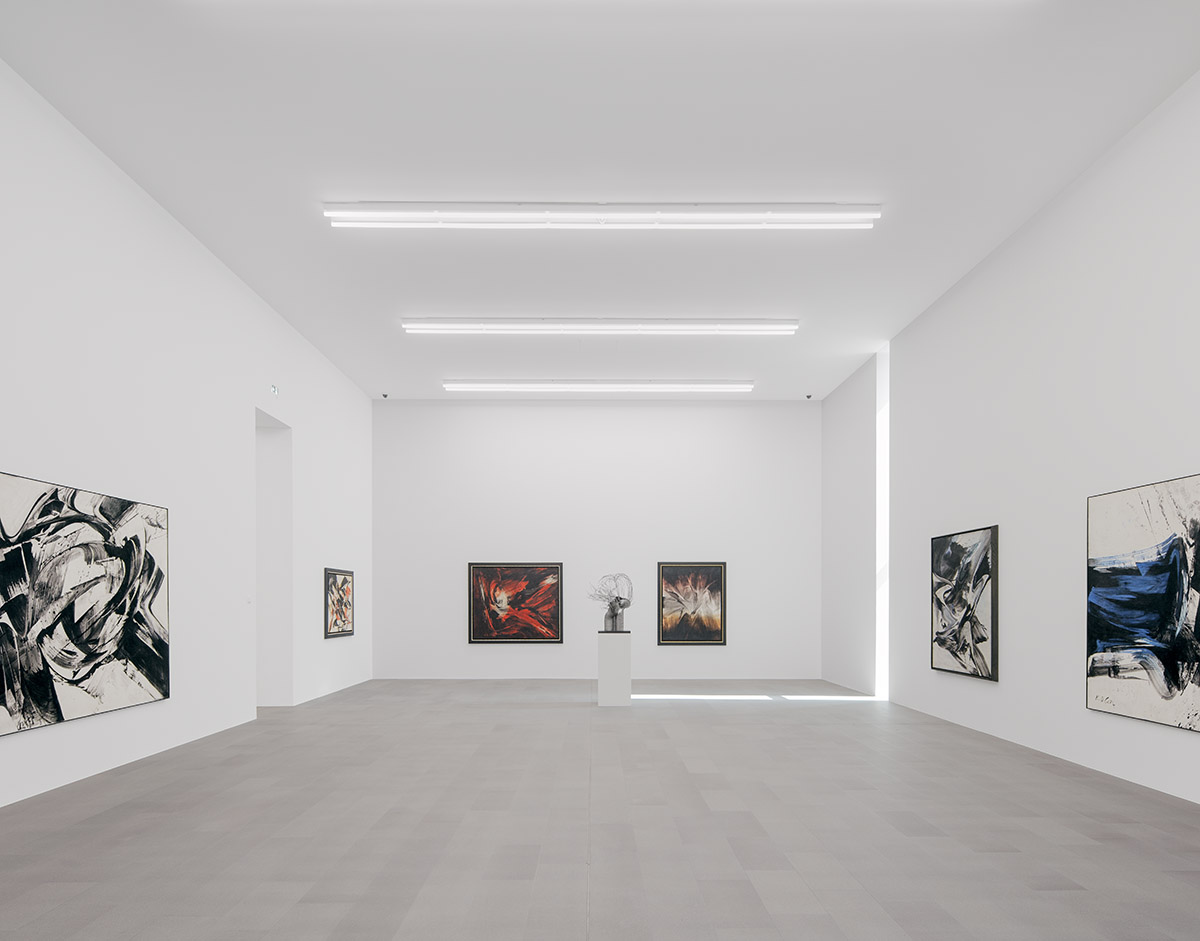 "Massing was crucially influenced by a ban on building within forty metres of the autobahn," according to the studio.

"Optimum use is made of the available area. The arrangement of the exhibition structures – the tallest of the three parts and the smaller one adjoining it – echoes the course of the building-free zone, while one elevation of the third part runs along its boundary."

The extension is directly linked to the existing exhibition spaces with bridges through the silos at the first and second upper levels, facilitating uninterrupted visitor access throughout the museum. 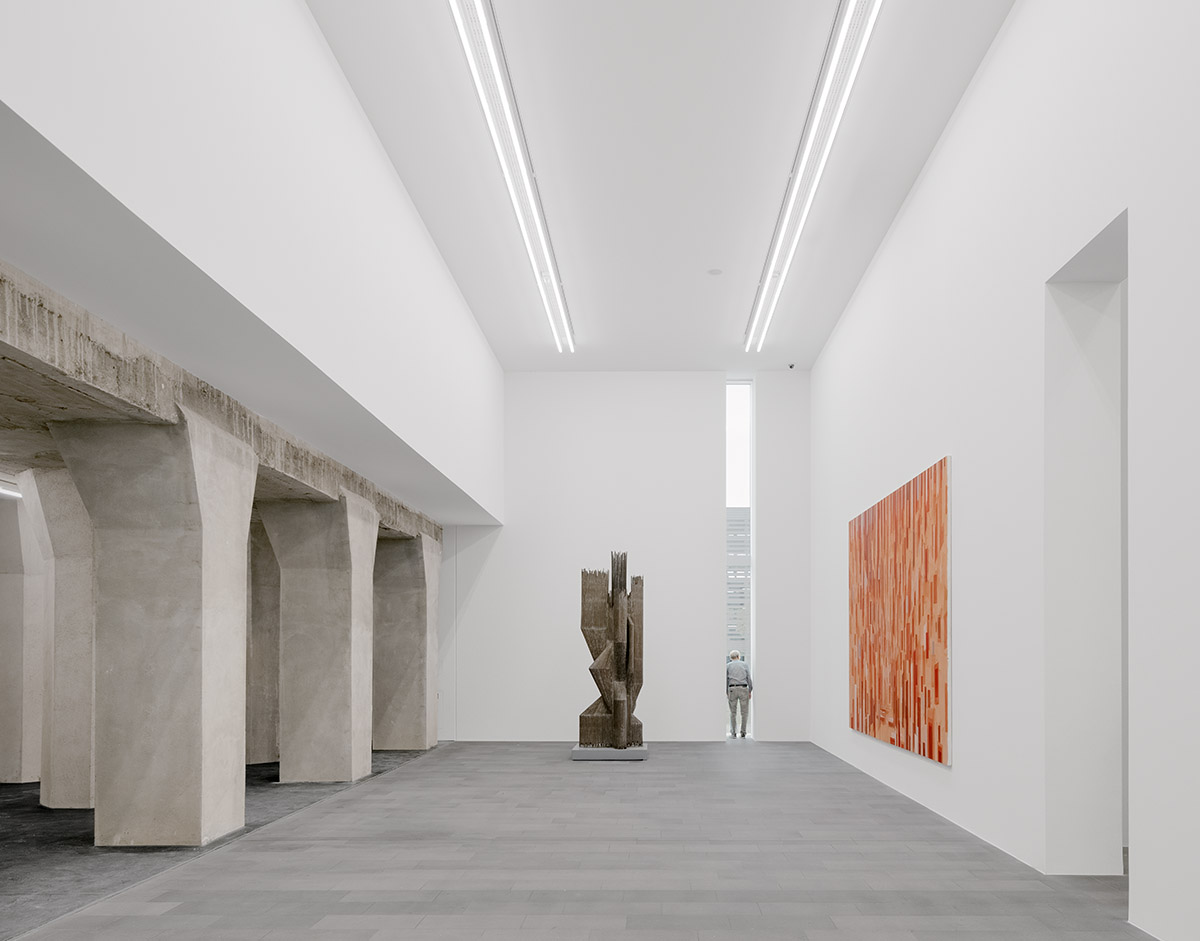 Similarly, the height of the new exhibition areas takes its cue from the existing galleries.

As the studio adds, "the silos will not only be converted into elements connecting the old with the new; they will also house distinctive exhibition spaces. Their original materials are to be retained, however, because the silos are an indispensable ‘sculptural’ component of the Küppersmühle as an industrial monument."

"Long reduced to this historical and aesthetic aspect, they acquire a new function through refurbishment as access links and display areas."

Six inner silos had already been removed. Now, with the ground- floor ceiling opened up and the insertion of the bridges, the entire space is visible to visitors. In addition, the silos can be seen from some of the exhibition areas. 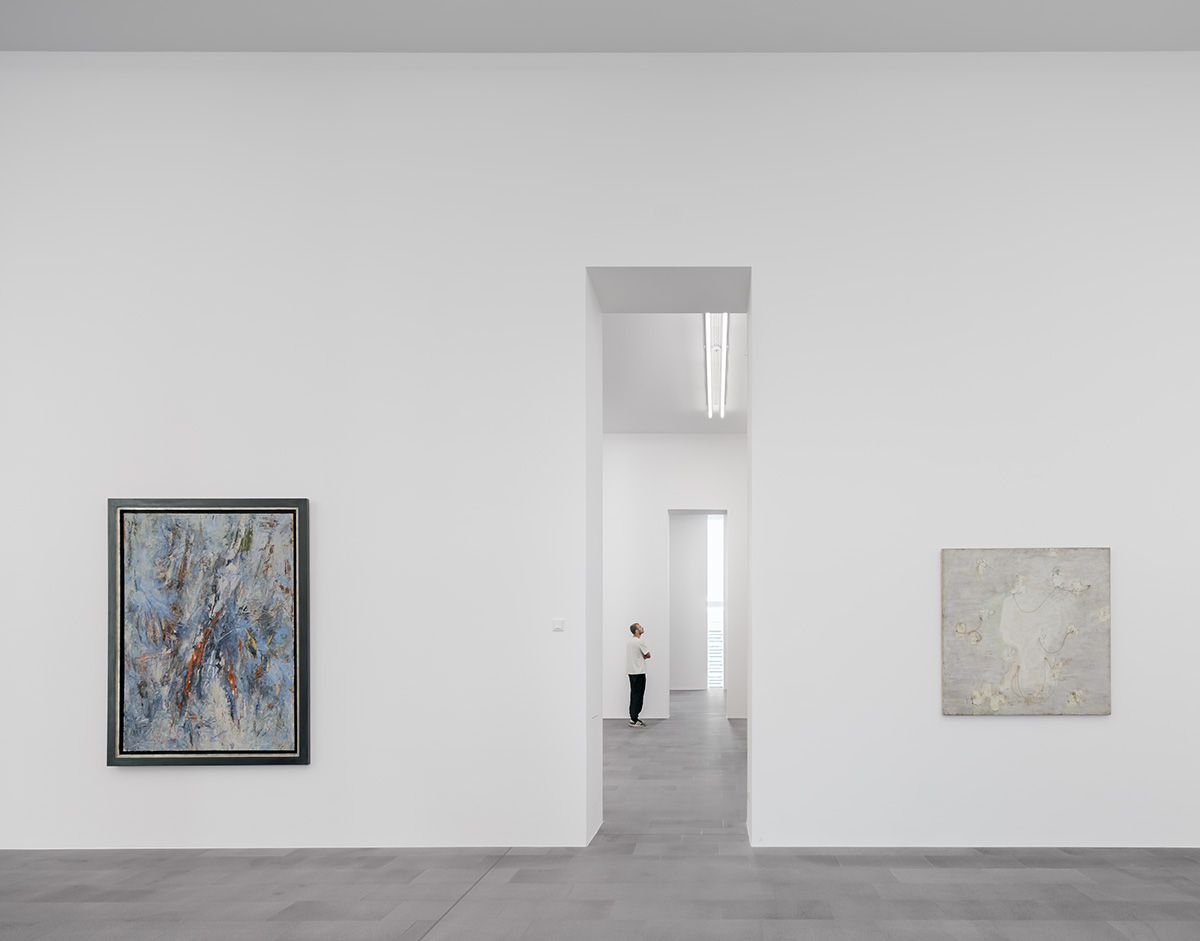 From the inside, the spectacular winding staircase — fashioned from terracotta-coloured concrete — resembles a gigantic sculpture.

As the firm explains, "a staircase permits continuous visitor circulation and the arrangement of all the exhibits in a consecutive sequence. In conception and spatial context the staircase is related to that featured in the museum project of 1999." 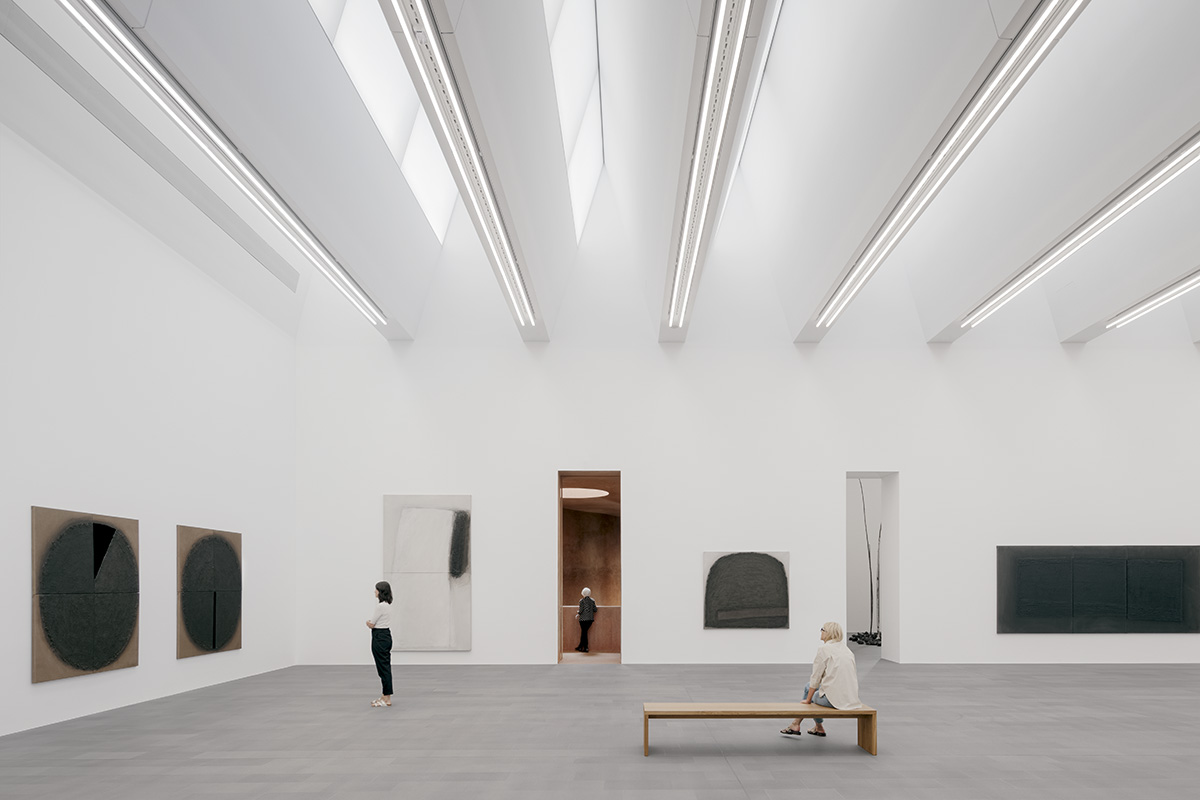 The new exhibition areas echo the overall additive character of the Küppersmühle as a typical industrial facility of the 19th and 20th centuries.

In their architecture and interior design, the galleries echo the existing exhibition spaces. The uppermost display area, which is not directly accessible from the existing building, consists of a visible shed construction with top-lighting. All exhibition levels have a spatial arrangement facilitating flexible multiple use. 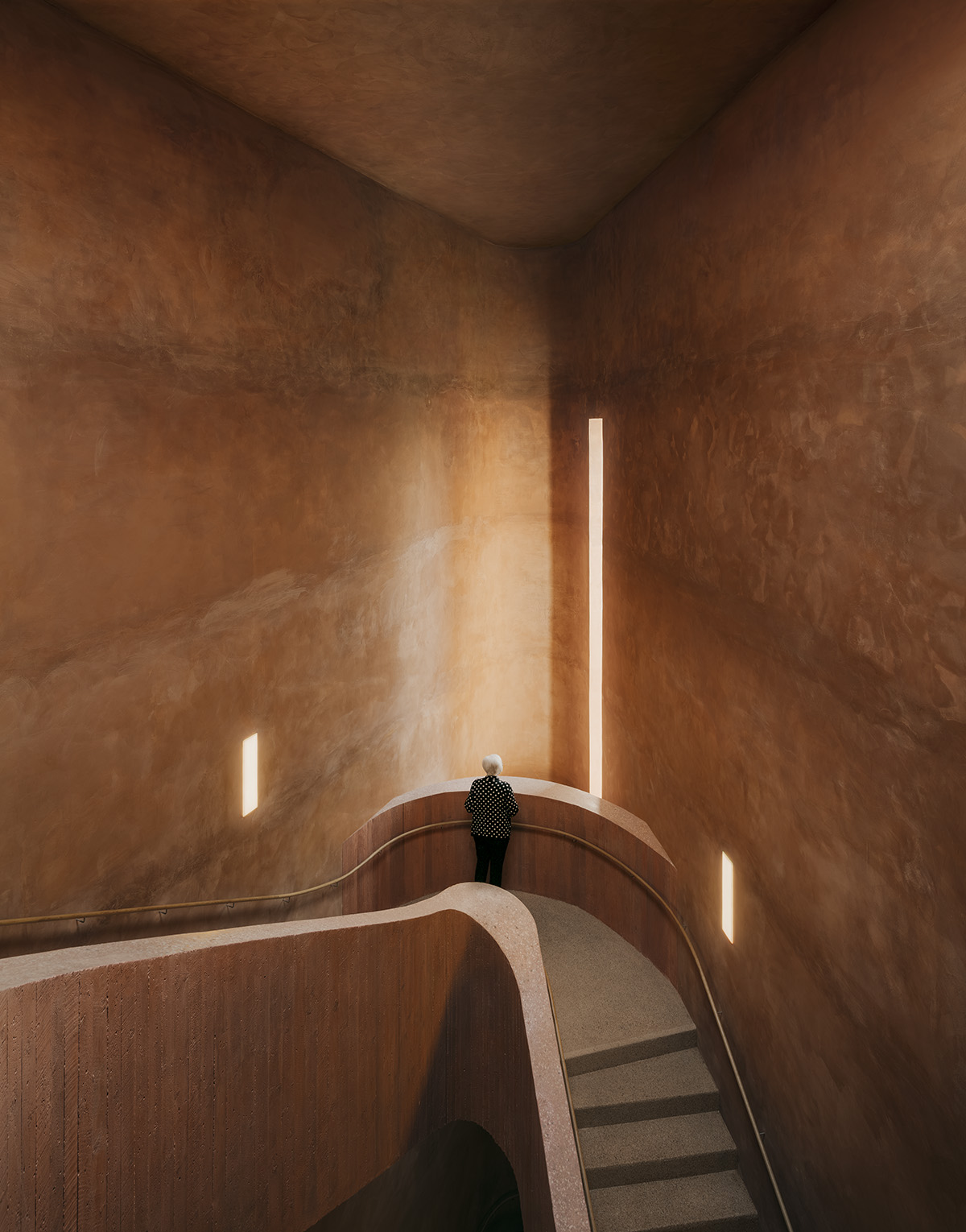 The silos are to be fitted out with a superstructure, as they were originally, in the 1930s. Featuring a viewing platform accessible from the dockside promenade, the superstructure will grant the silos yet another new function. 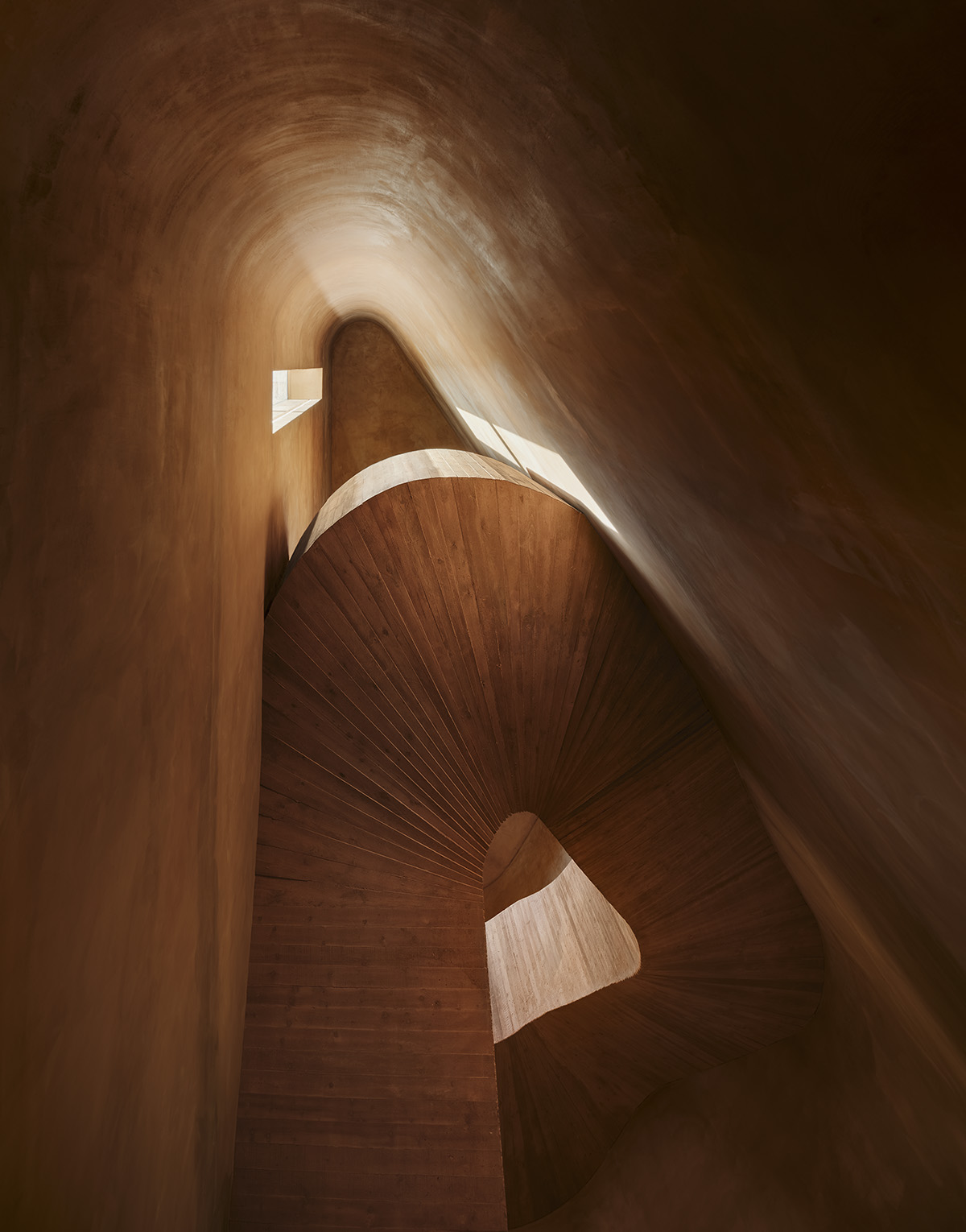 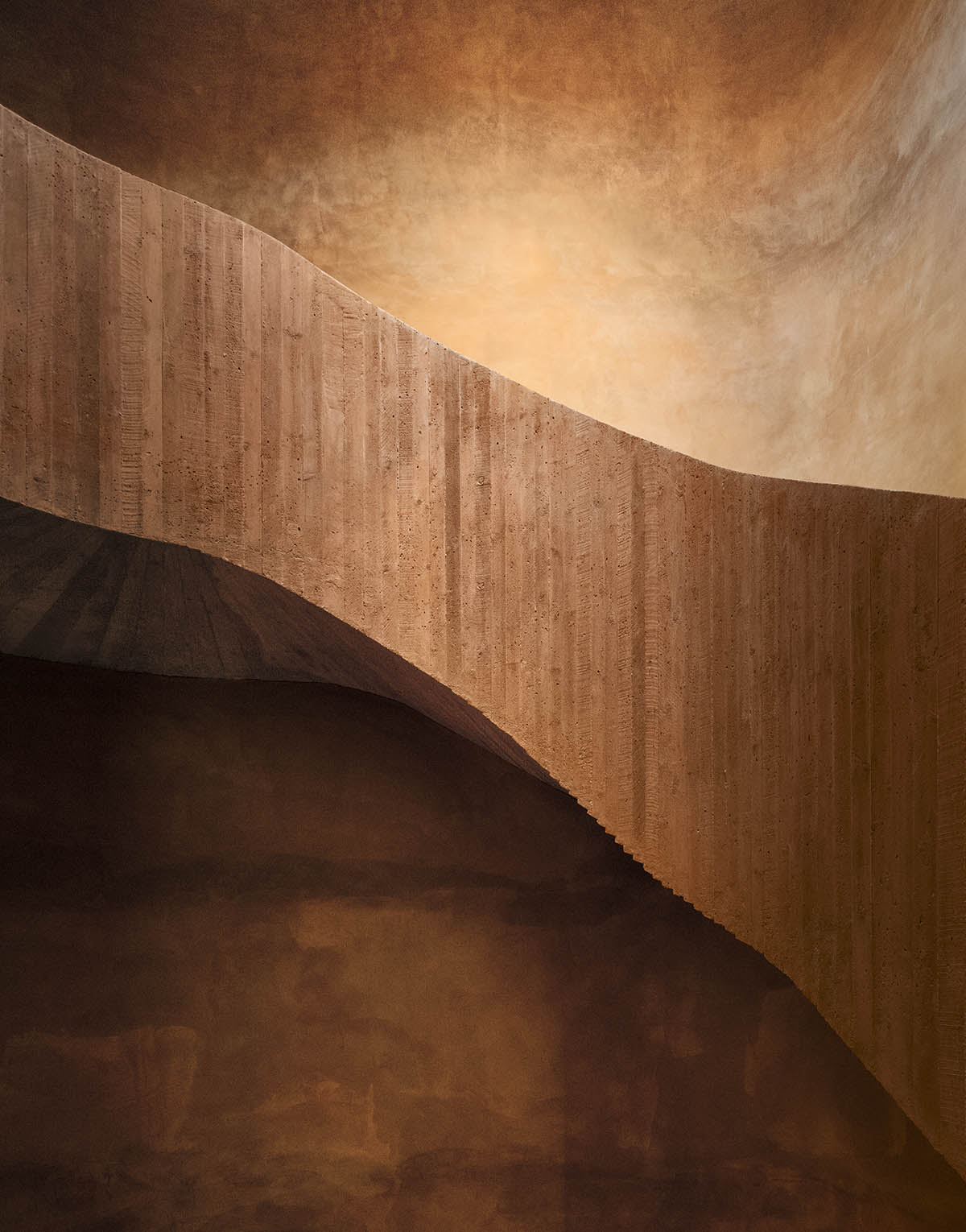 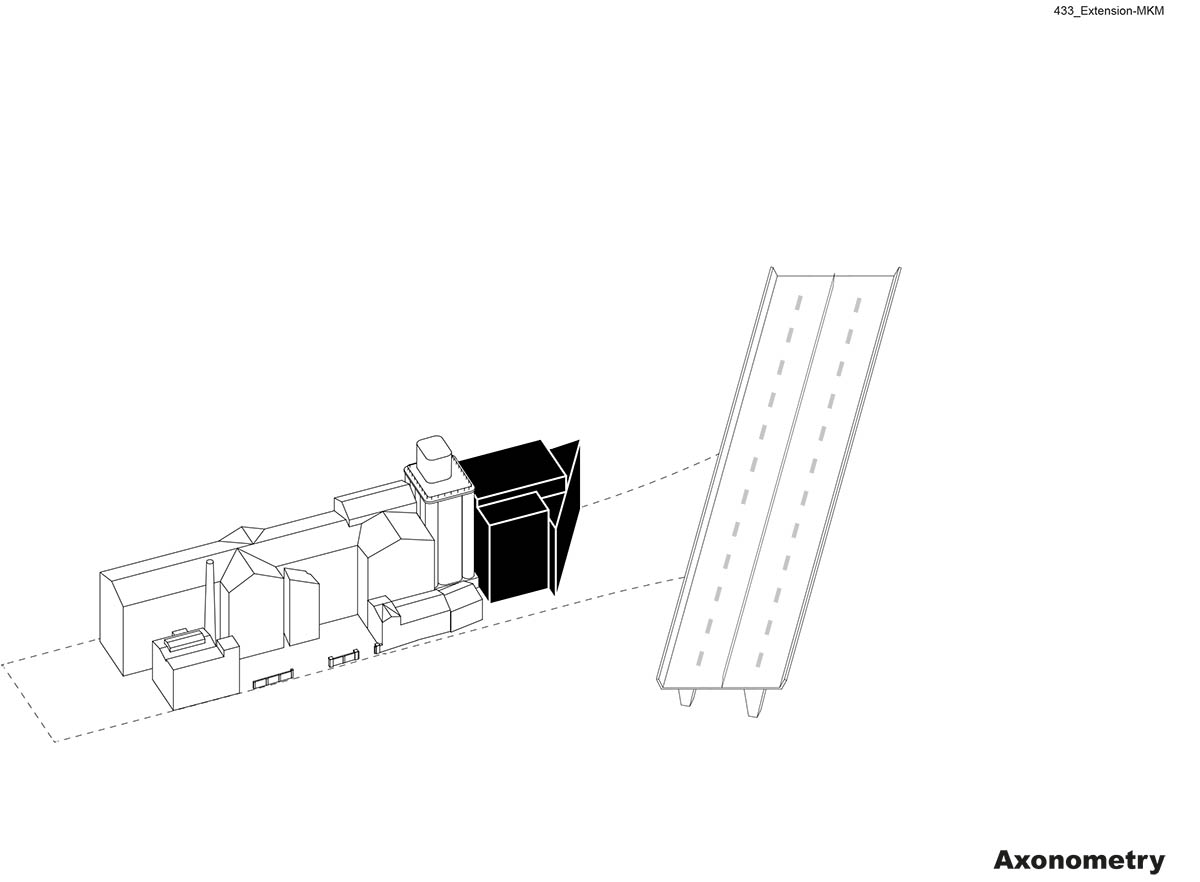 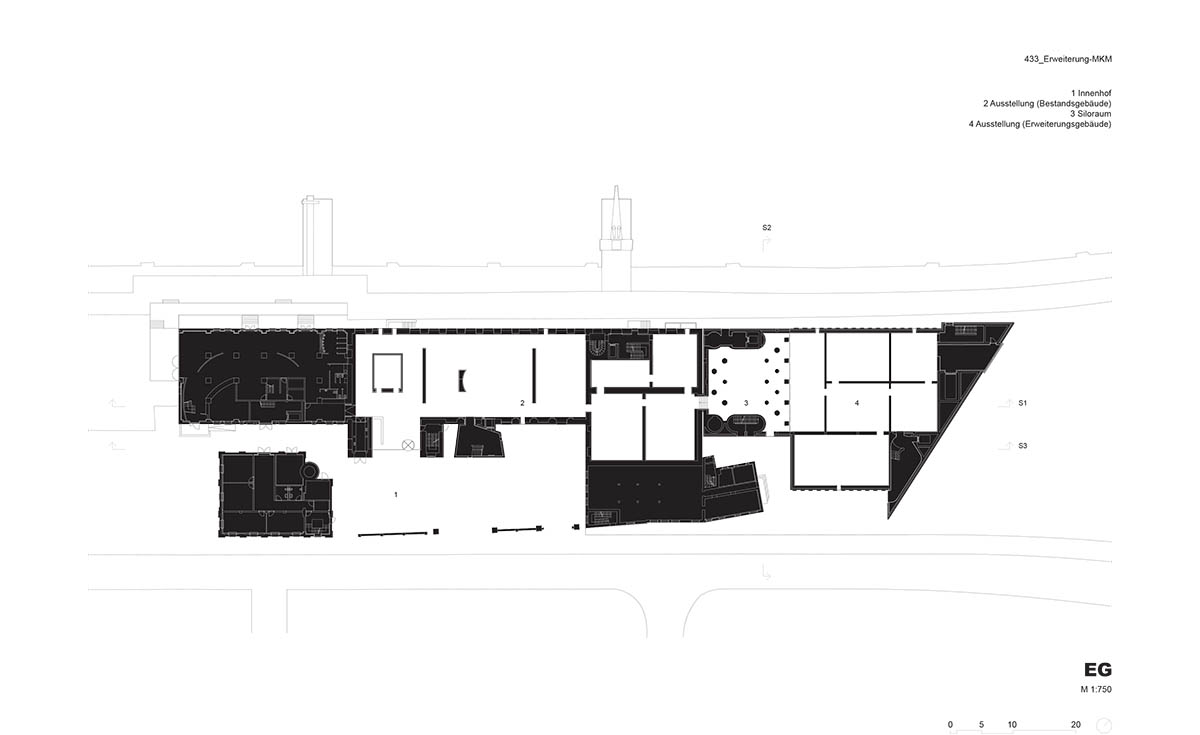 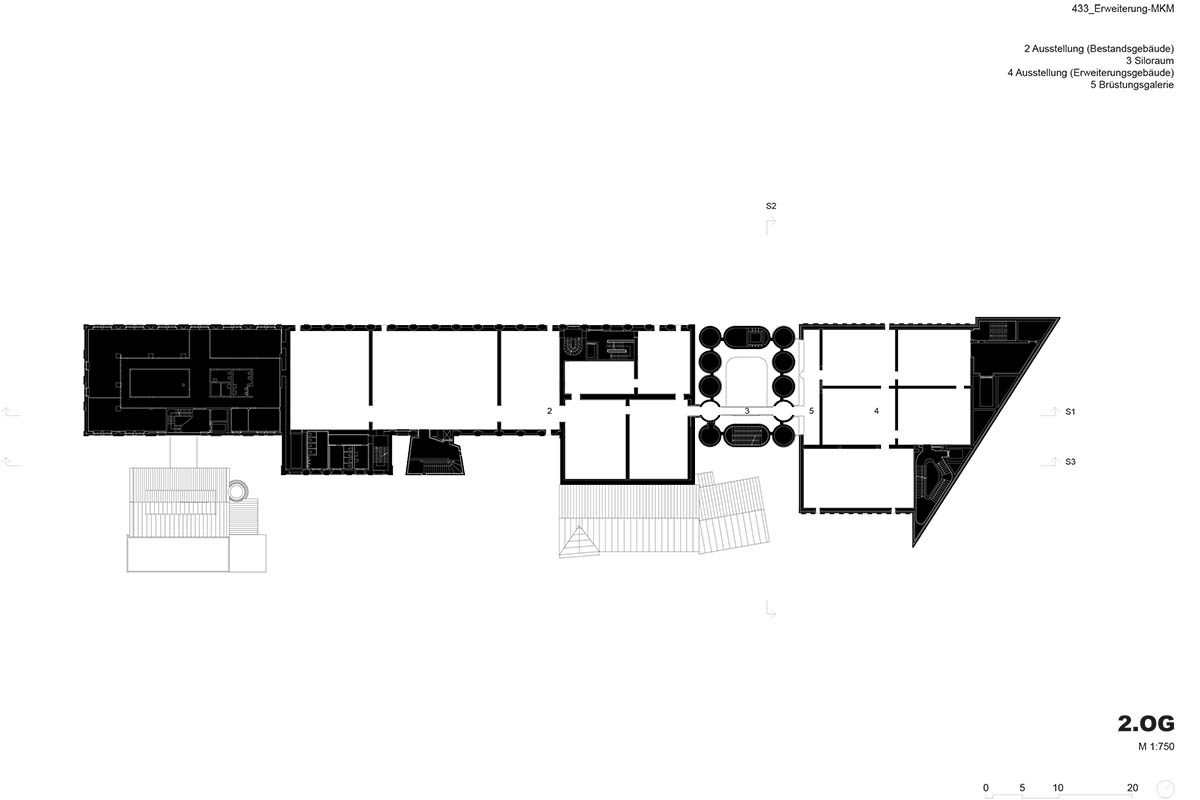 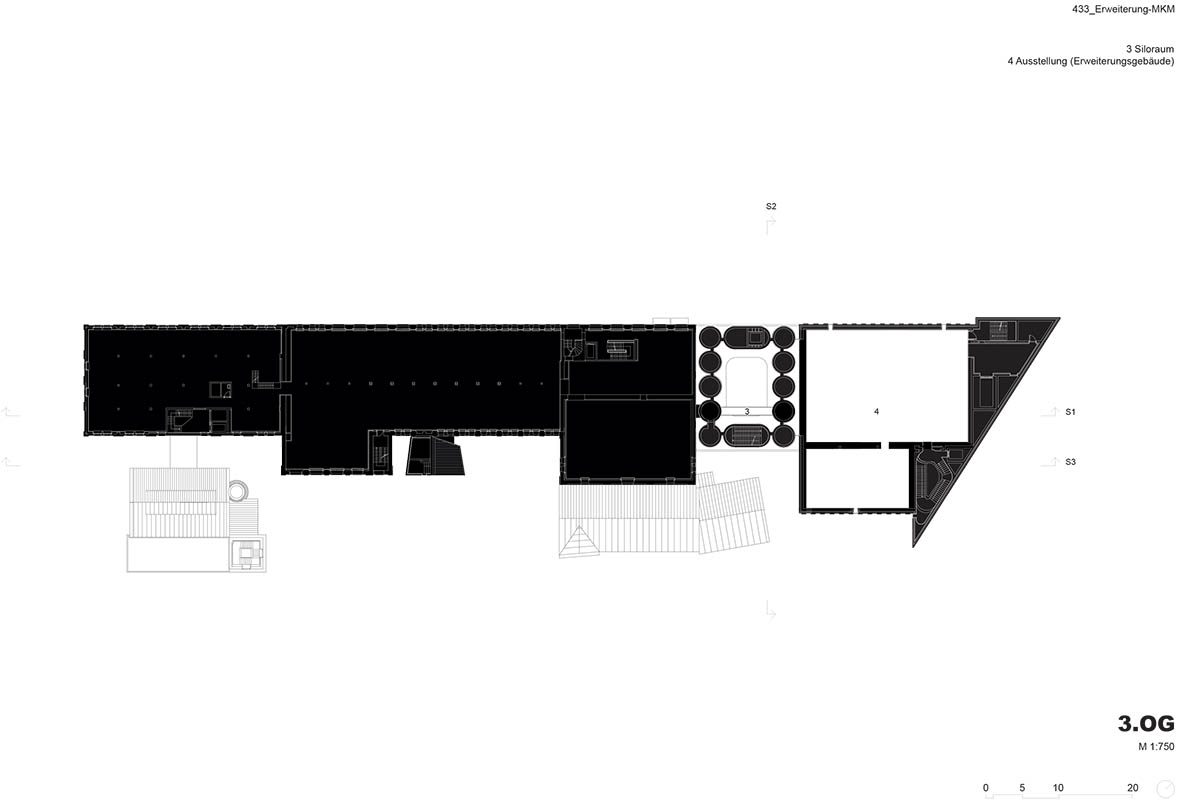 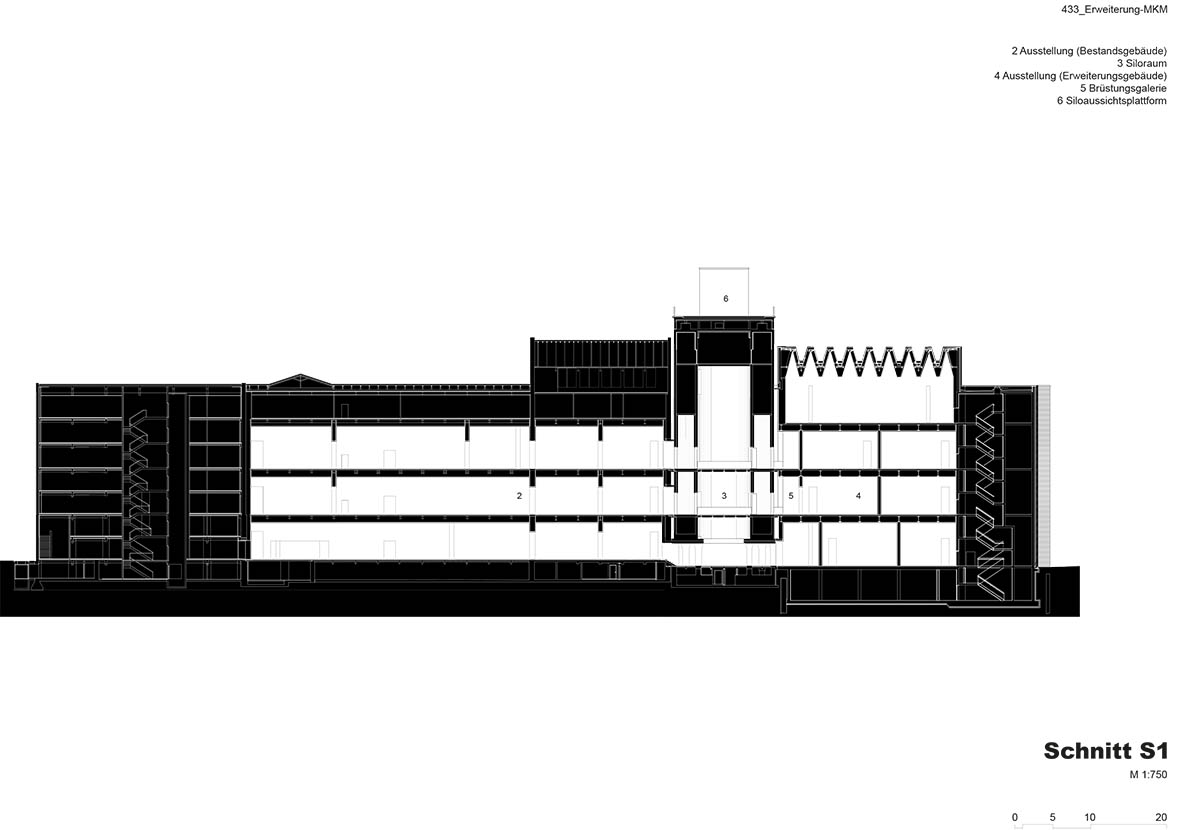 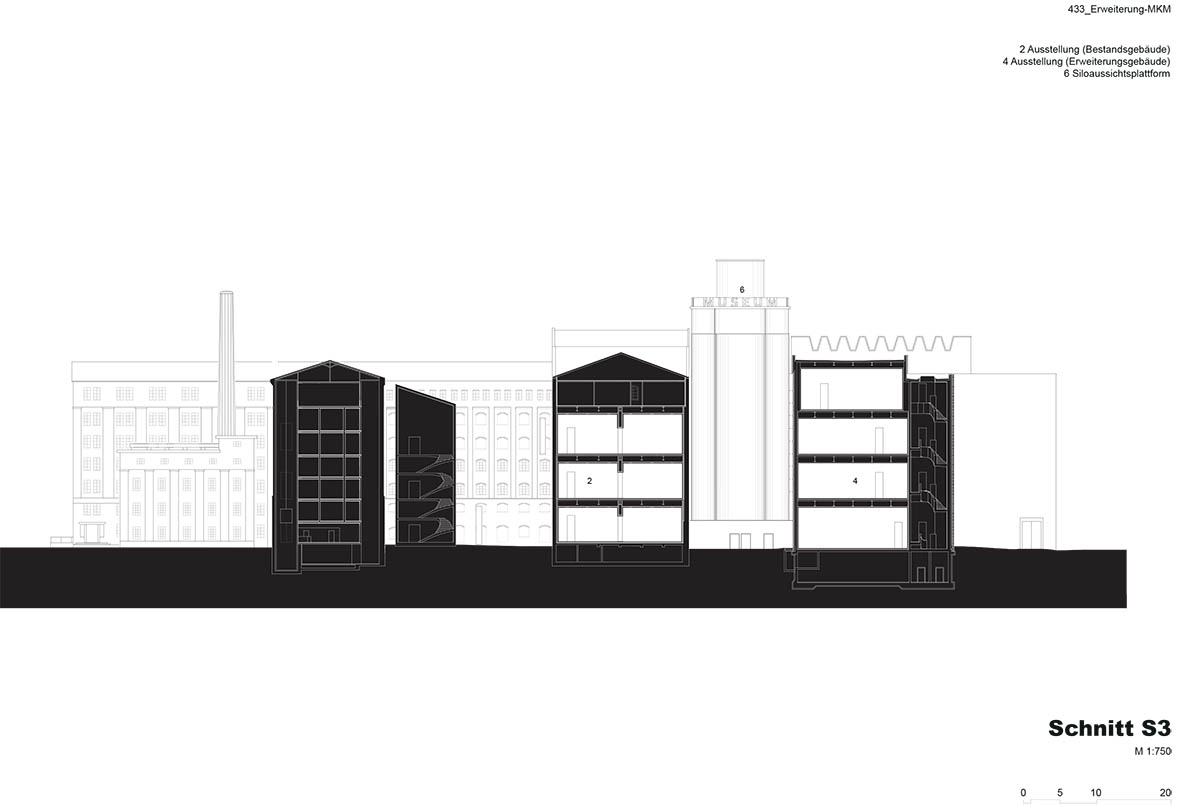 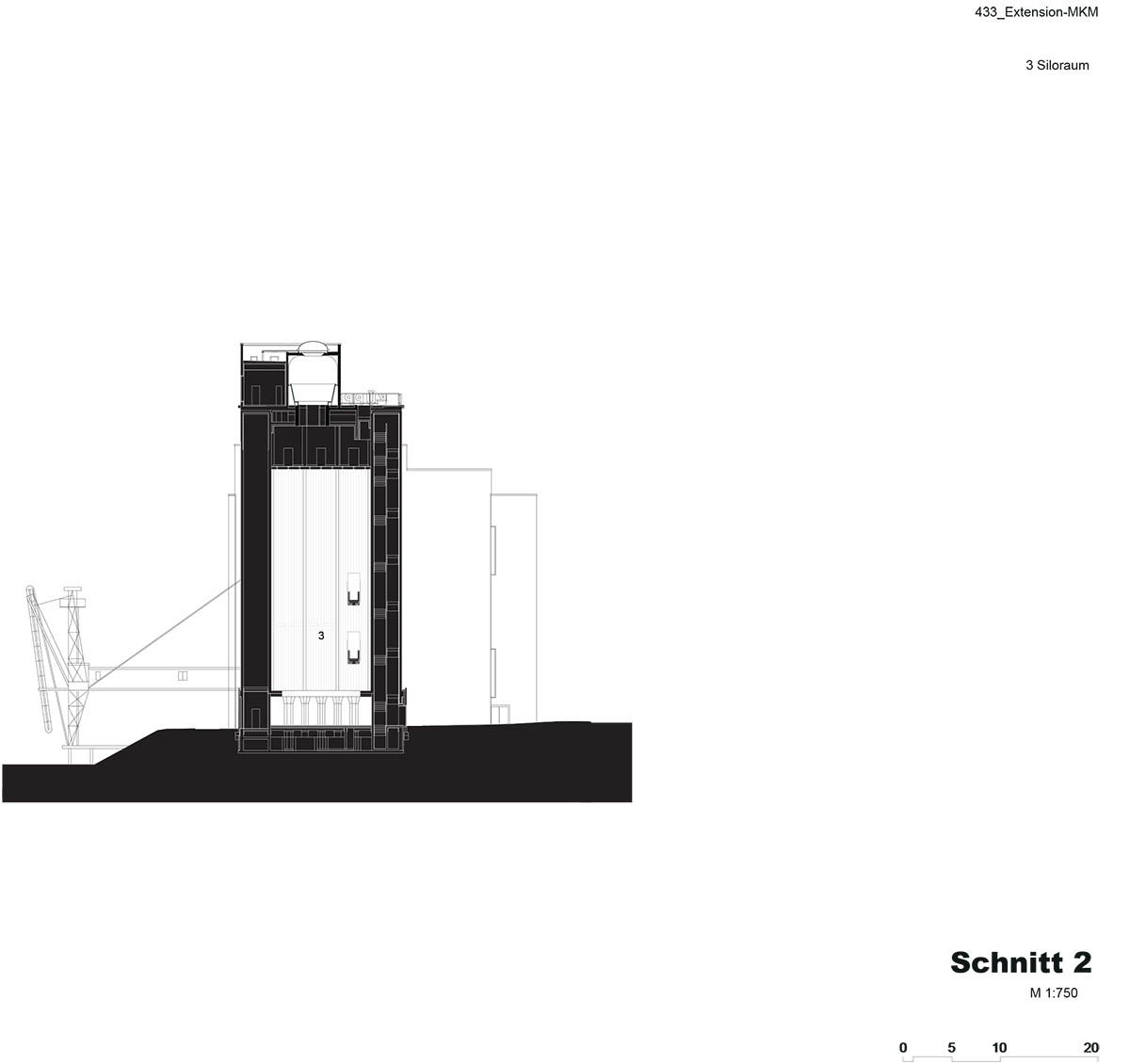 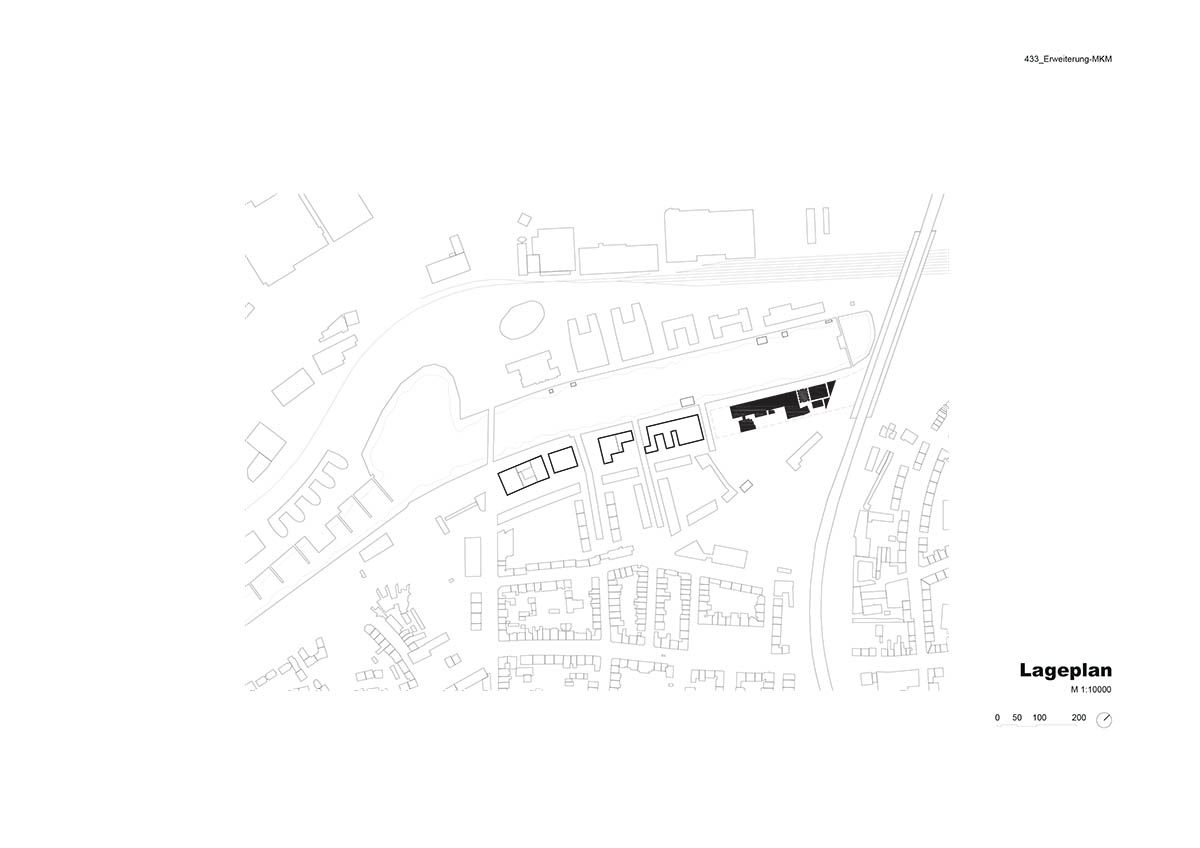