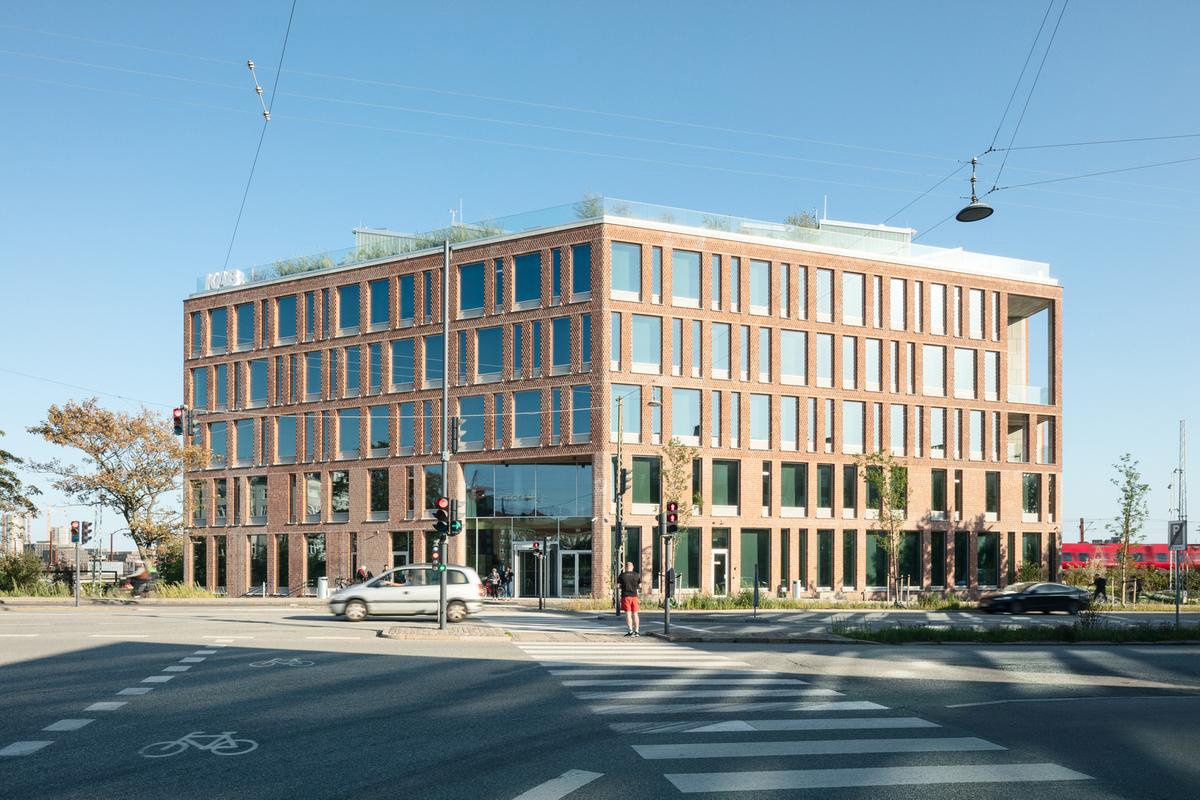 Located on the axis of two major streets in Copenhagen, between one of the city’s oldest neighborhoods and one of its newest, the building bridges Danish office culture with home life.

"With KAB, the challenge was to create something simple out of something complex" said Signe Kongebro, Global Design Director and Partner at Henning Larsen. 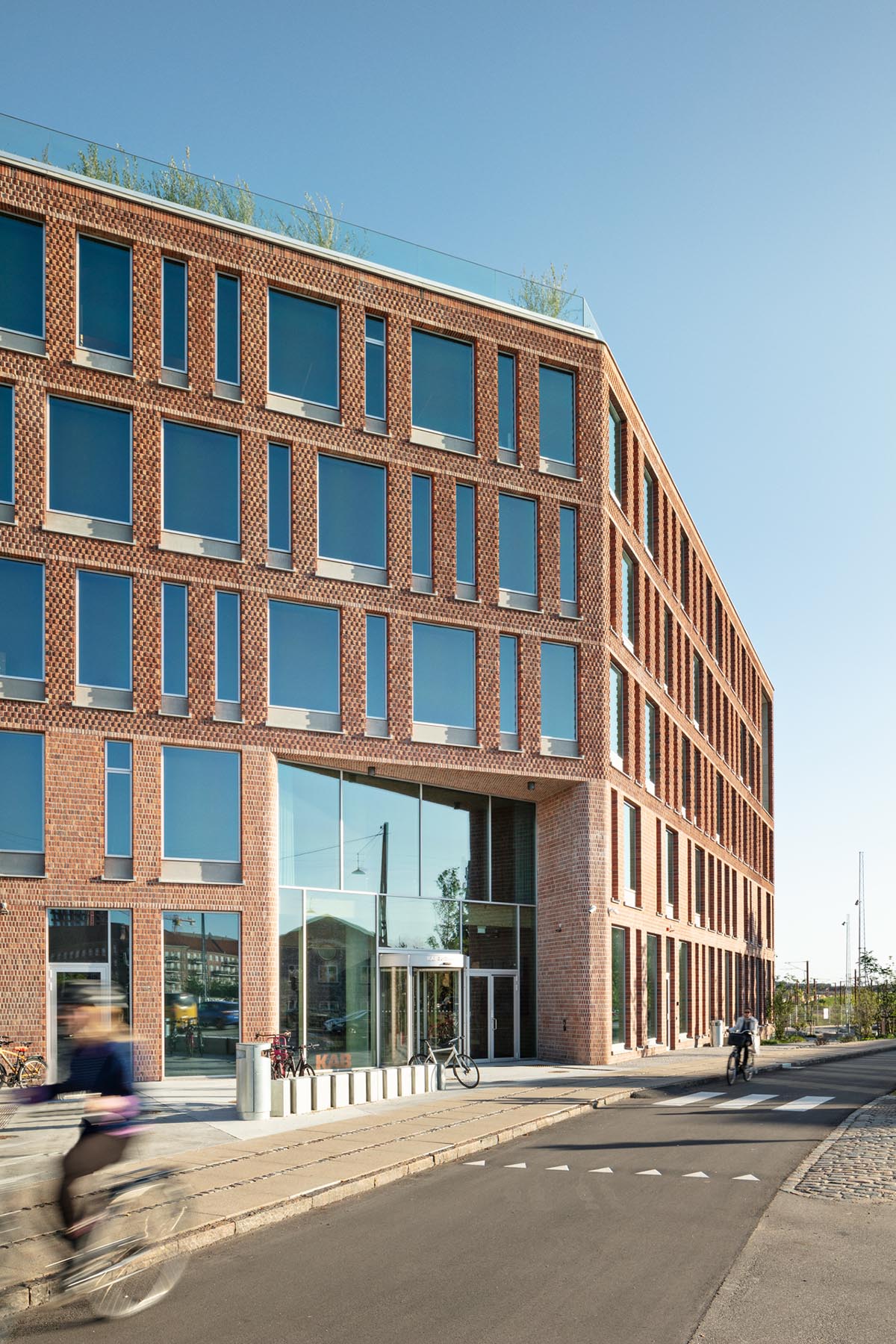 Like many cities across the world, Copenhagen is facing a housing crisis. Unlike many cities, however, where a complex web of speculative development and financial interests have shifted the view of housing from a place for living to an opportunity for investment, in Copenhagen the problem is simple: there are not enough places to live.

When KAB, was founded in 1920, Copenhagen faced much the same problem it does today. As people flooded to the capital from the countryside, housing simply couldn’t keep pace. Housing associations like KAB were established to develop, build, rent and administrate properties – and to make sure that prices remained fair. Today, KAB manages nearly 64,000 units across Greater Copenhagen, housing approximately 120,000 residents (10% of the city’s population) with a quarter million more registered on waiting lists. 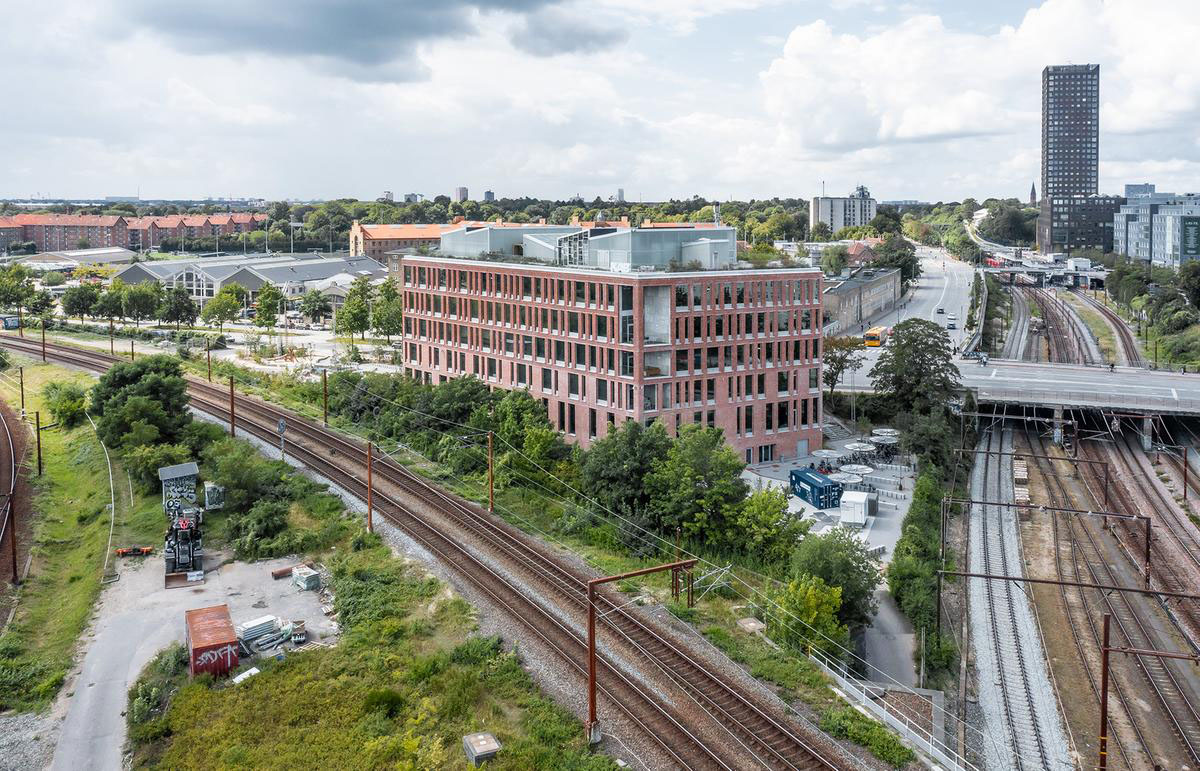 Henning Larsen's architectural approach to KAB is a deceptively literal one, the team takes cues from traditional elements of the home – the living room, the stairs, the garden, the kitchen – and apply them to the workplace.

Things begin traditionally office-like: The ground level is open and airy, the large reception desk flanked by a plant-filled seating area behind which the office canteen nestles. It is once you make your way up the stairs that the feeling changes. 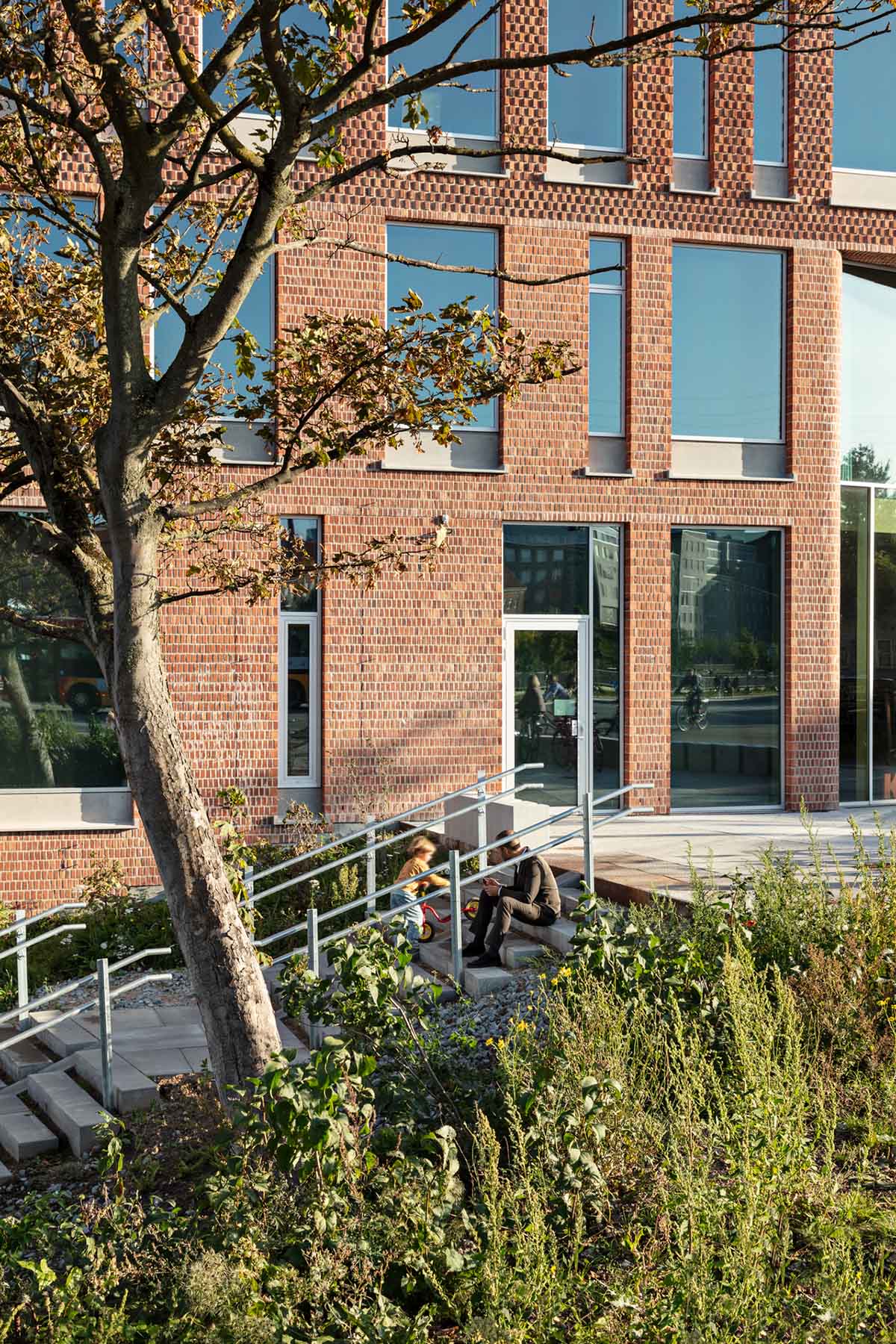 Within the atrium, nearly everything is clad in wood, giving the space a soft, ‘hyggelig’ feeling and adding scent and texture not often associated with the workplace. The slender stairs cut back and forth across the middle of the atrium, alighting on large community kitchens on each floor.

"The stairs are a play on the classic stairwell of residential buildings, which is typically the place you meet your neighbor," explained Troels Dam Madsen, Associate Design Director at Henning Larsen.

"In the KAB House, we added layers of visibility, texture, and beauty to what is usually a very practical space." 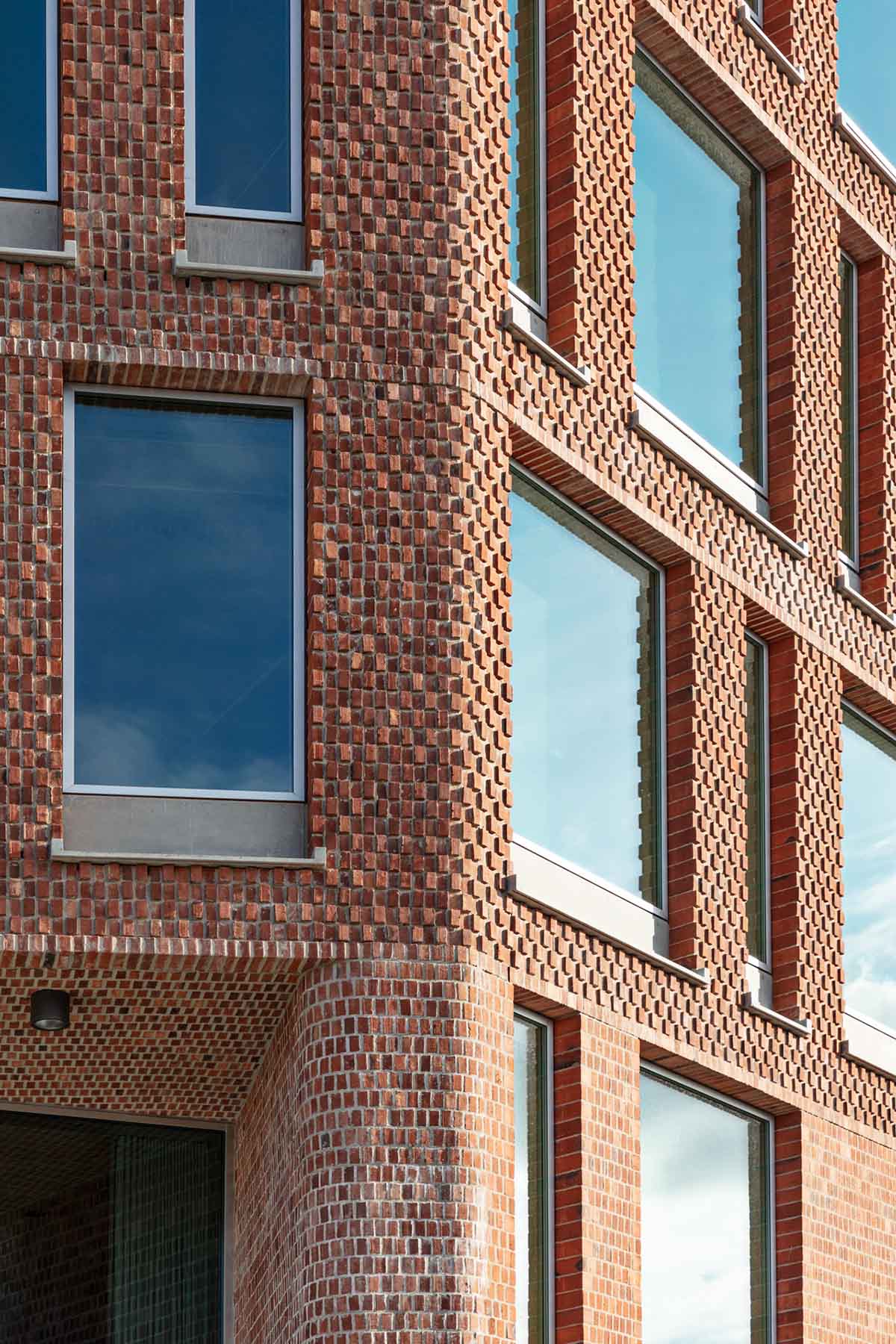 The western edge of the atrium is a wall of windows, behind which the main meeting rooms – outfitted to resemble rooms in a house – and office are located.

This move marks the border between the private workplaces for KAB and the space that is accessible to the public, while also suggesting something a little more subtle. When you peek into the windows of the meeting rooms from the stairs, you are observing a household at work. 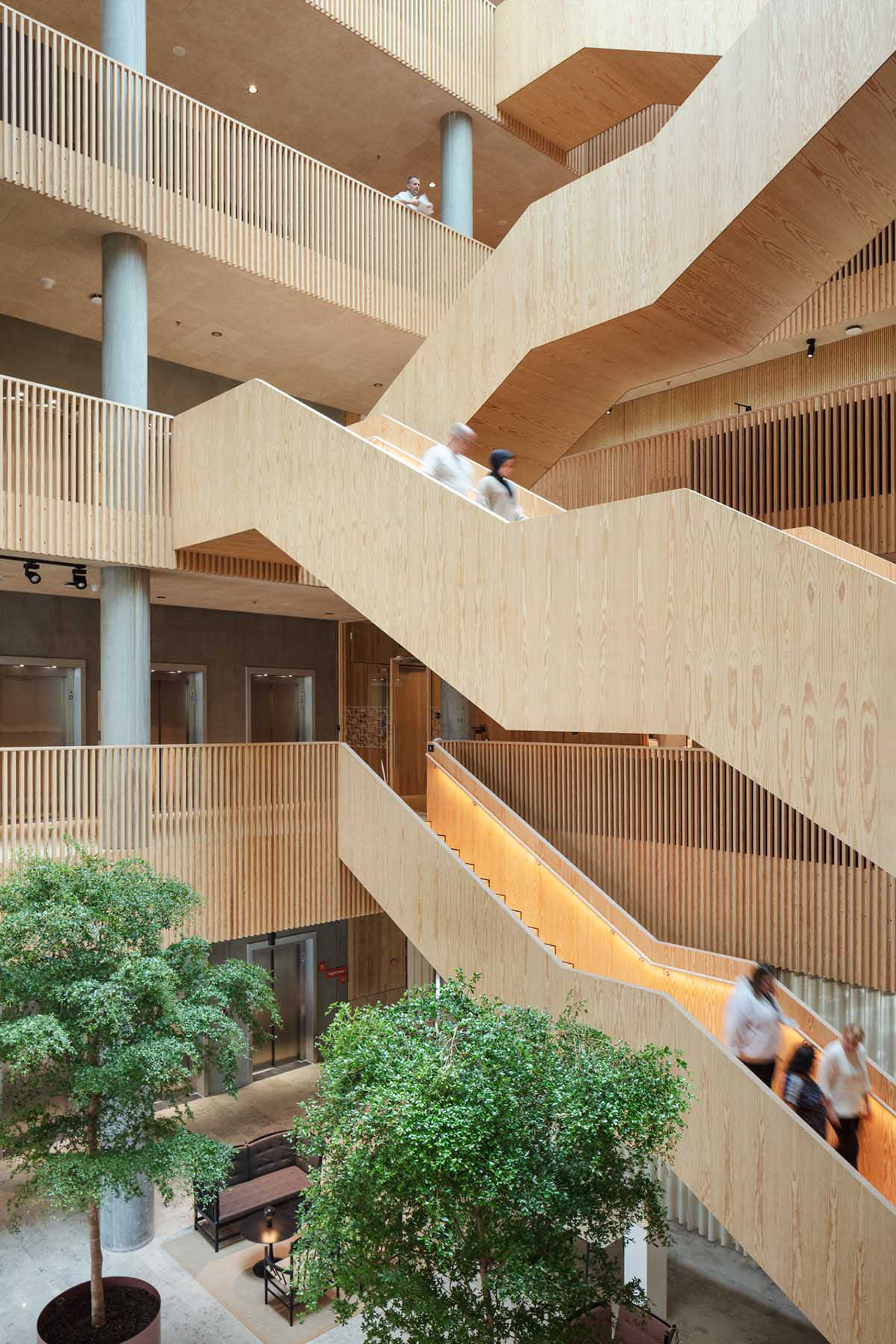 For all the cues inside, the KAB House could hardly be mistaken for a home on the outside. Located in a ‘leftover’ space that is not quite in but rather between several neighborhoods and perched on a multi-layered intersection that sees traffic from cars, buses, bikes, and trains, KAB is located squarely in the center in Copenhagen’s sites for future growth. 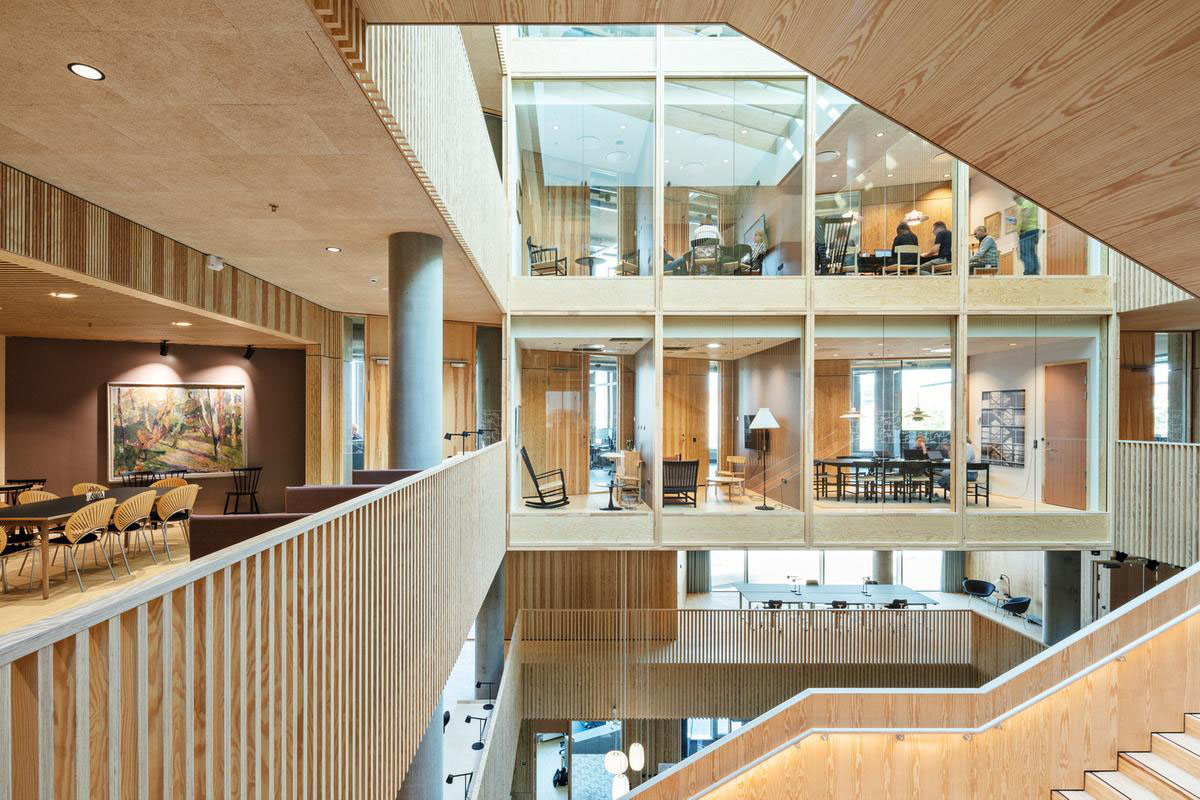 In response to this medial situation, this house is designed with no front or back, its pentagonal shape opening onto the city on all sides and framing views on to Vesterbro, Sydhavn, Carlsberg, and Valby.

By implementing a sturdy, red-brick exterior, the façade evokes the materiality and pragmatism of the properties it has overseen since the 1930s, with some flair in the bricklaying that is unmistakably contemporary. Henning Larsen has worked with Danish landscape studio SLA on the project. SLA's parkland around the KAB House invites neighbors and passers-by to stop in green surroundings.

At the top of the KAB House there is a green roof garden where visitors and employees can take a break and enjoy views of the railway body and Copenhagen towards all corners of the world. 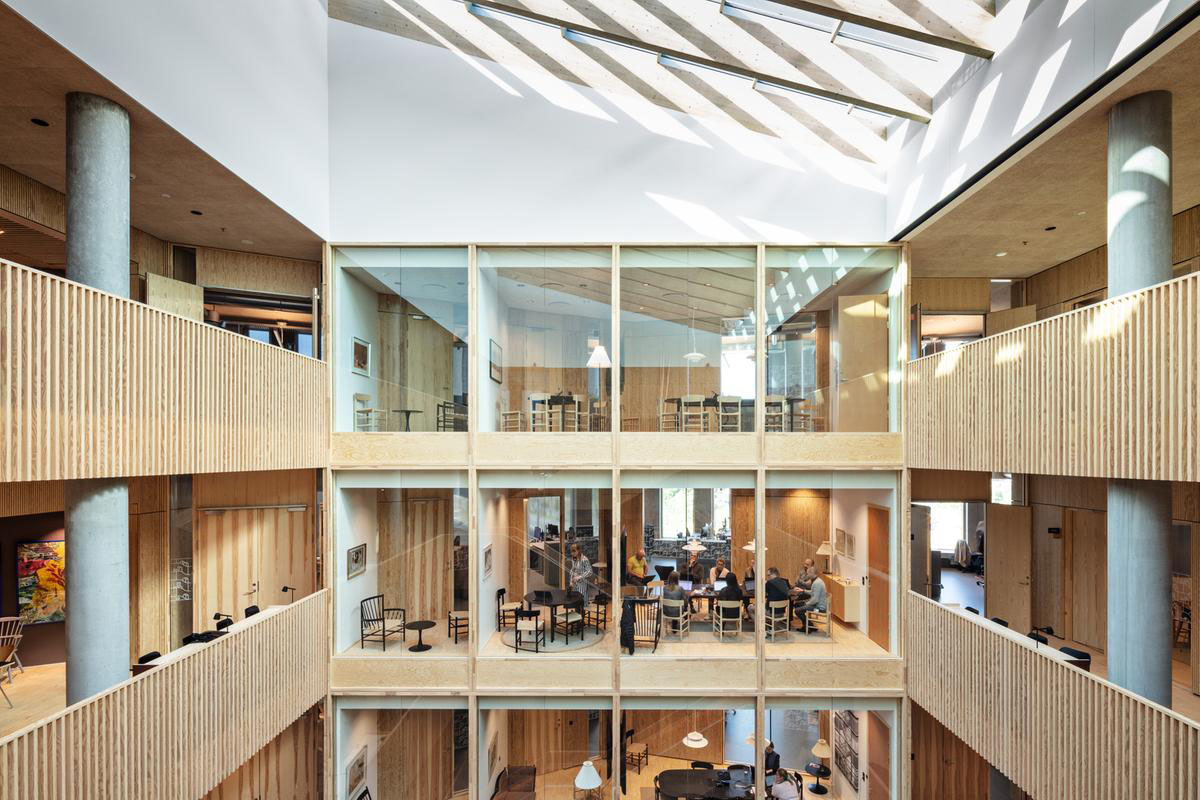 "With the KAB House, we have designed an urban nature that gives employees, visitors and neighbors in Vesterbro a green and inviting rest break. The landscape draws character from the creative environments of the local area and continues the raw surroundings of the existing railway terrain by creating a robust and identity-creating nature design – from street level to roof garden. In this way, the nature design binds both the KAB House together with the local area, while acting as a 'buffer' against the noise and particle pollution of the track terrain" said Mette Skjold, partner at SLA. 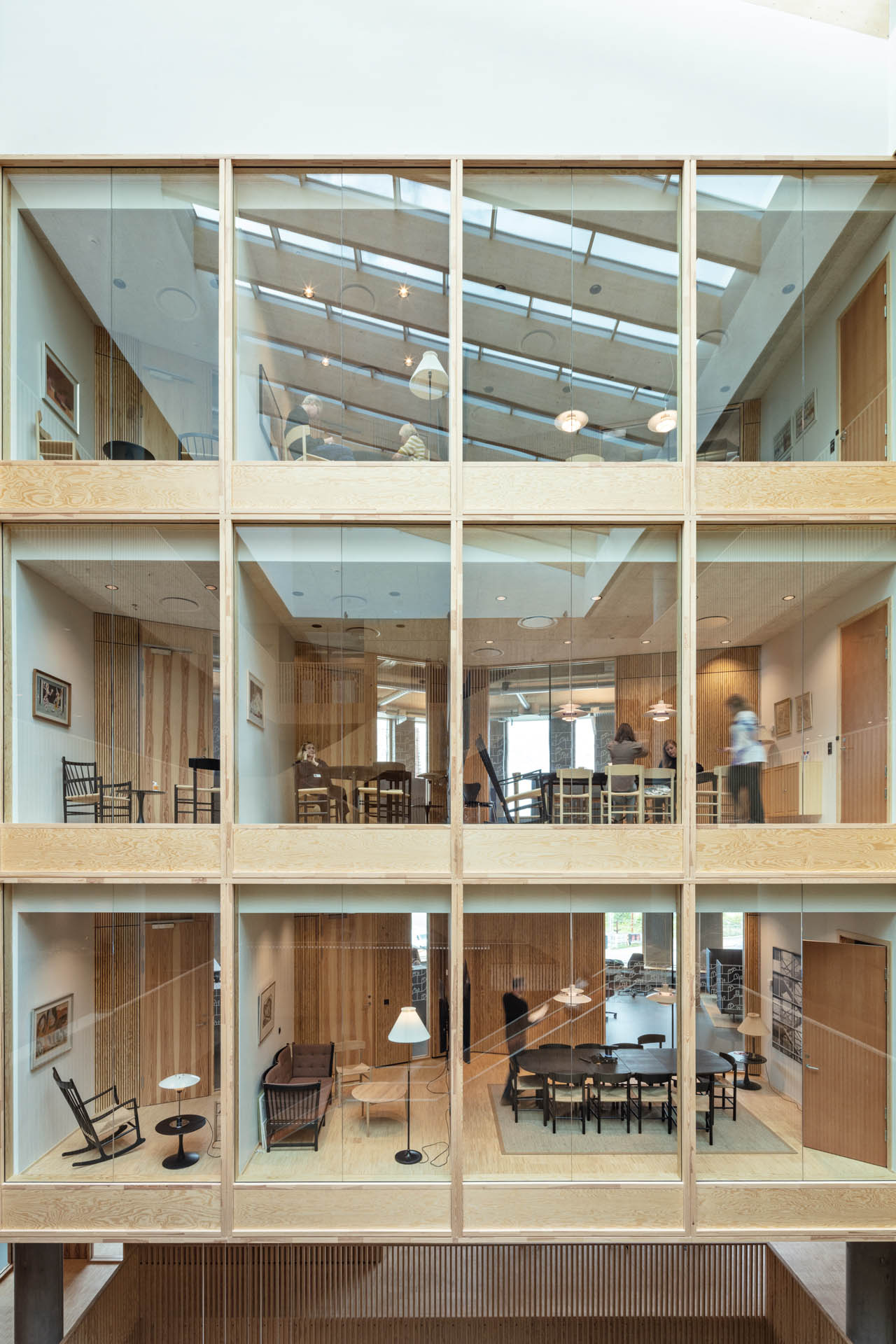 The building is a gathering place for 44 housing organizations, approx. 120,000 residents and provides the framework for KAB's 400 employees' daily work. KAB moved in in June 2021. 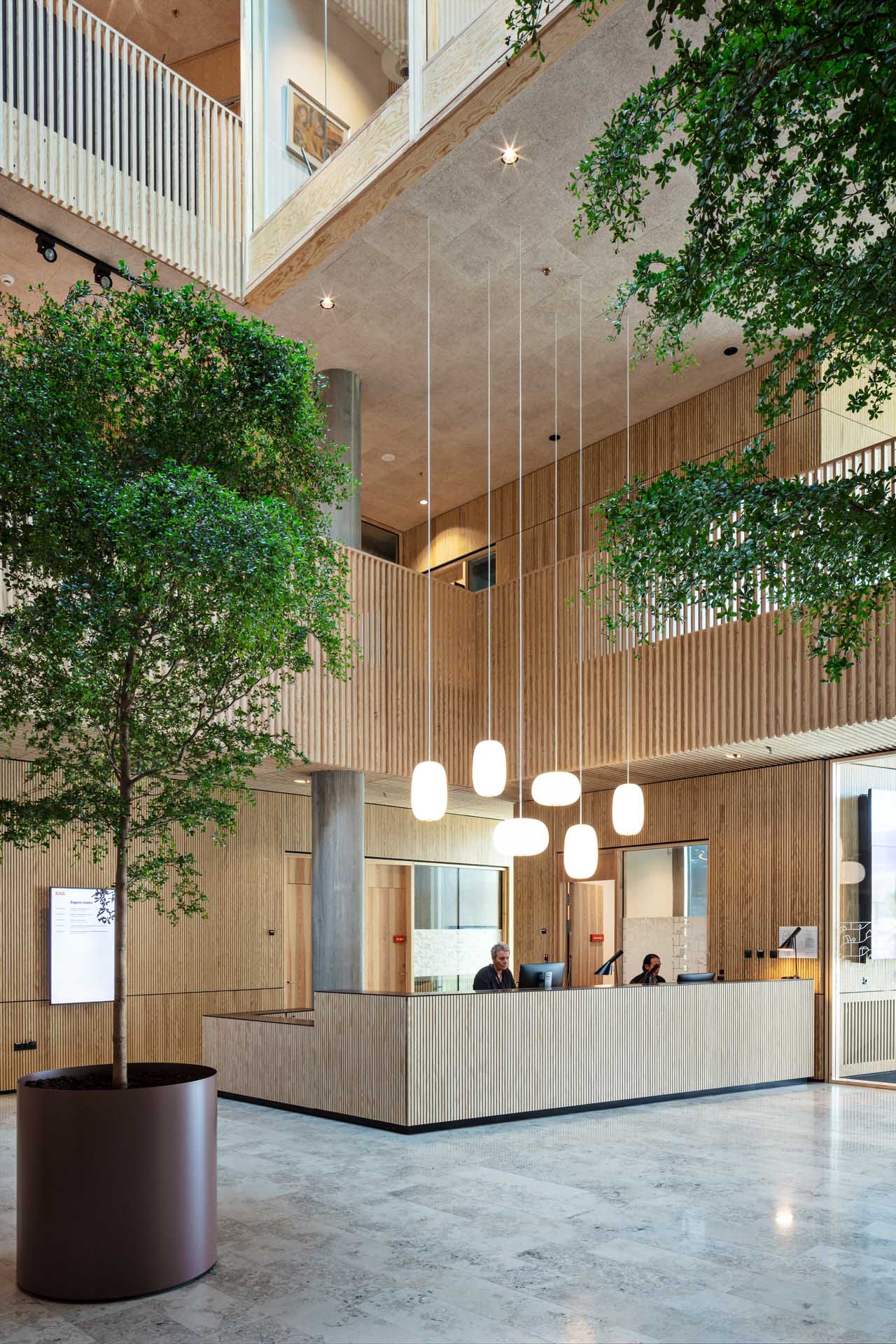 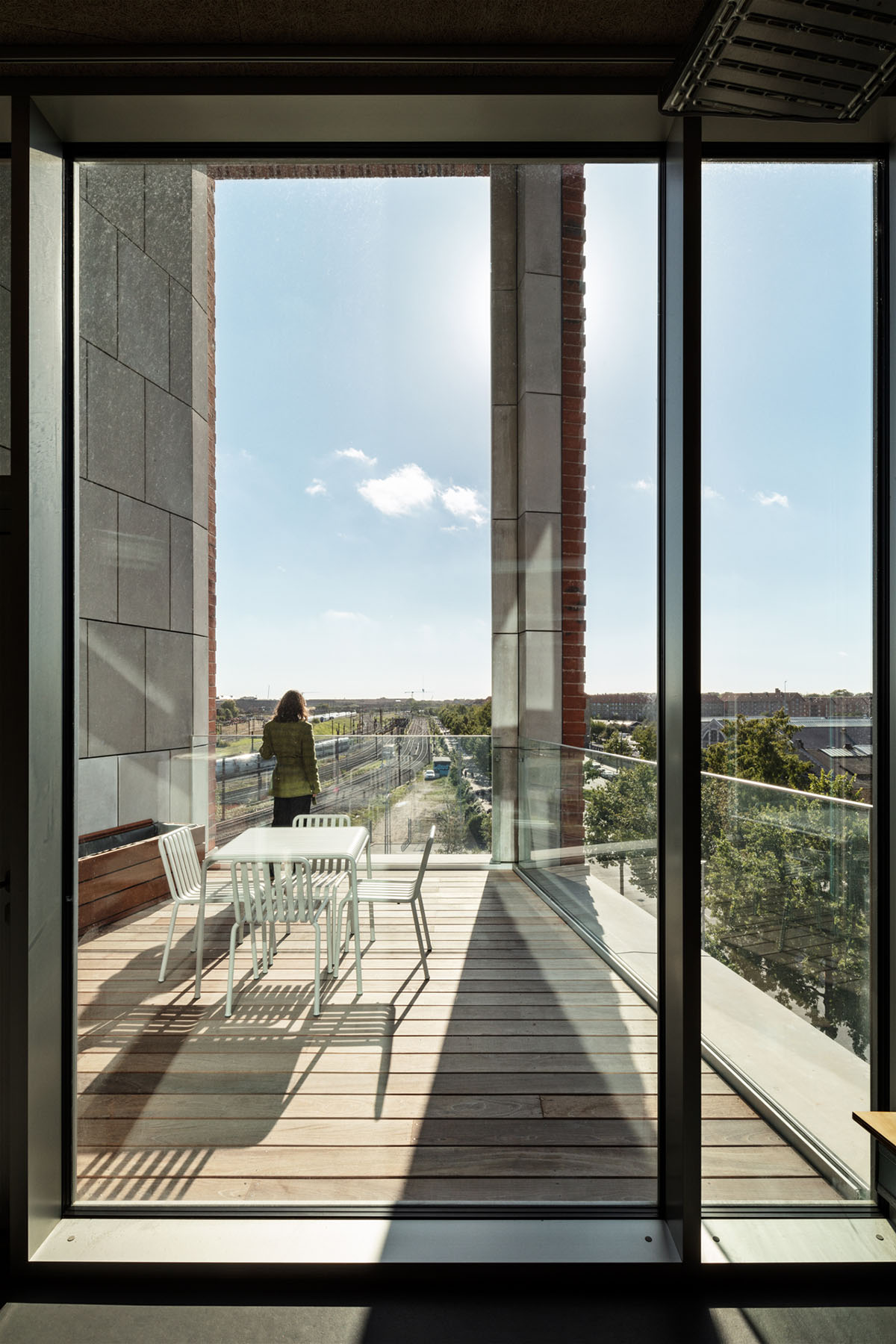