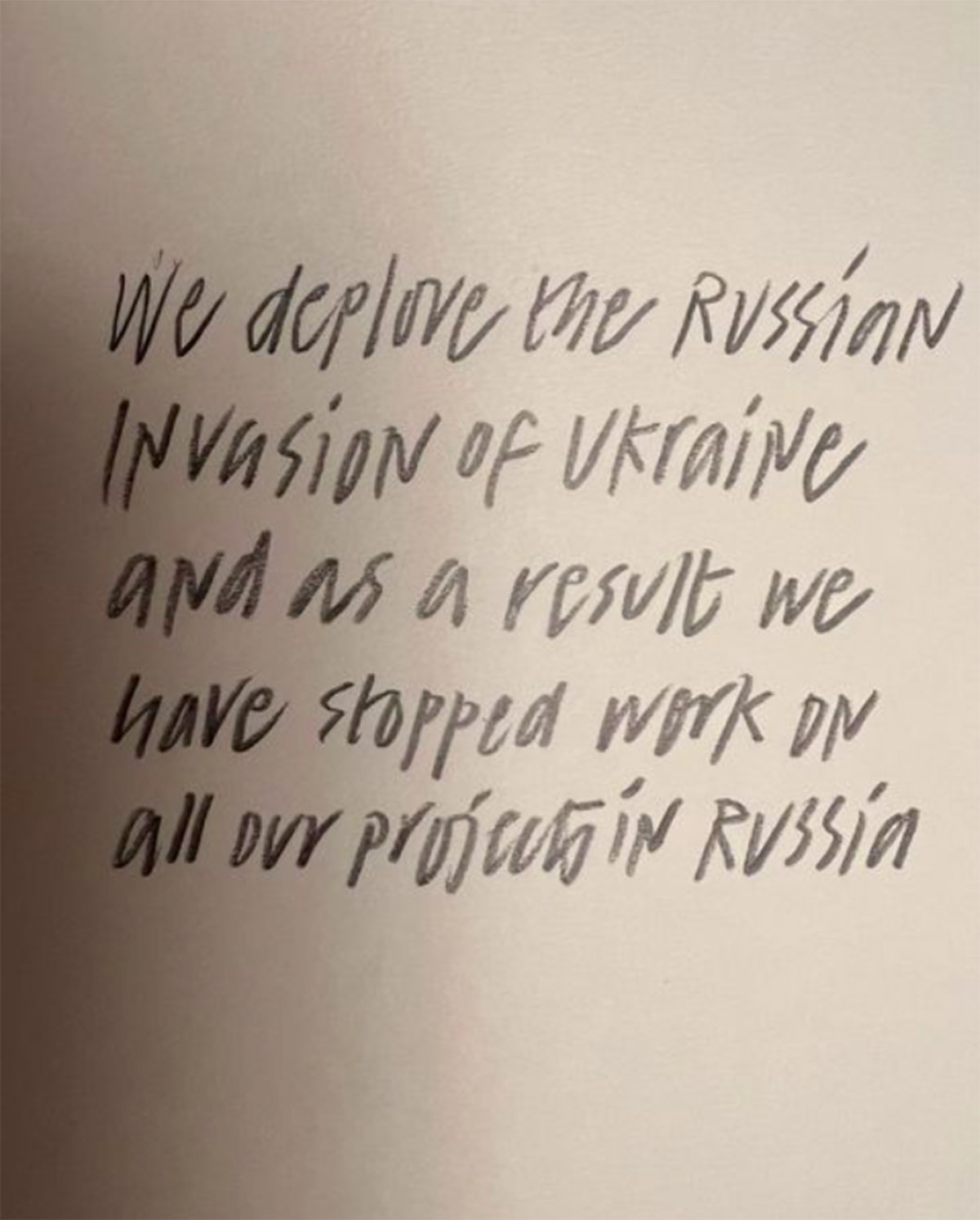 Foster + Partners and UNStudio are the latest architecture practices to suspend their projects in Russia, following the country's invasion of Ukraine on 24 February.

"We deplore the Russian invasion of Ukraine"

The firm's fonder Norman Foster declared on his Instagram account (with his hand letter, the picture above) and said: "We deplore the Russian invasion of Ukraine and as a result, we have stopped work on all our projects in Russia."

Foster + Partners, the largest architecture firm of the UK, designed two projects in the country; the Russia Tower in 2006 and RCC Headquarters in 2021.

Meanwhile, UNStudio released a statement on its website and said: "We support those across Russia and beyond who are affected by the Russian government’s decisions."

"We are currently suspending our projects in Russia and are doing this with the understanding of our clients."

"We condemn these inhumane actions"

"UNStudio is deeply saddened by the Russian government’s violent invasion of Ukraine, and we strongly condemn these inhumane actions," said the firm.

"We stand with the people of Ukraine - especially our colleagues who are directly and indirectly impacted by this turmoil."

K31 Courtyard, a community-focused residential complex in Moscow, SoCo masterplan on the Russian Black Sea coast and a new office campus in St. Petersburg were among the ongoing projects of UNStudio.

"BIG joins the international community in solidarity with the Ukrainian people"

Bjarke Ingels Group (BIG) related a statement on its website and said: "BIG joins the international community in solidarity with the Ukrainian people, our Ukrainian and Russian colleagues, friends, and families in the region."

"BIG is not engaged in any projects in Russia or for the Russian government anywhere and our support for Ukraine’s sovereignty, democracy, human rights, and territorial integrity is unwavering," the firm added.

"We further condemn the inequities that emerge from war including racial prejudices at border crossings, loss of homes of many innocent people and most importantly, the loss of life. We implore the Government of Russia to bring an immediate cessation of this war."

"Standing with 3.5 million architects from 115 countries, the UIA expresses solidarity with all those suffering from the conflict. The continuing loss of life in Ukraine must stop."

"The  architectural community is fighting for a cleaner and better planet. We are distressed that the war is doing the opposite. We must stay focused on endowing a better world to future generations."

"We stand firm in supporting Ukrainians and their country. War is not the way to solve problems. The International Union of Architects is for peace, collaboration and unity in the world," the statement concluded.