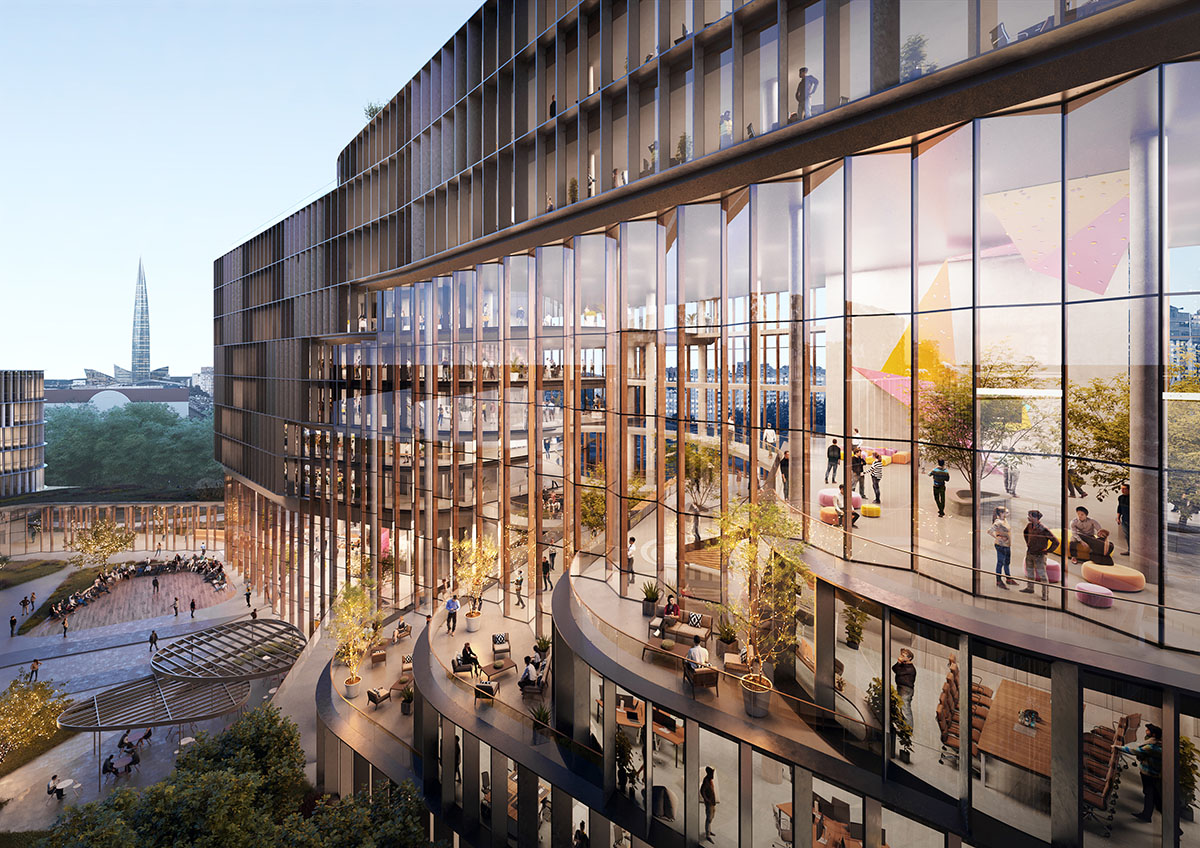 The company has 9 offices already located in Europe, the U.S. and Russia, and UNStudio-designed new building will help the St. Petersburg office attract unique talent by expressing its distinct identity to its workforce.

UNStudio's design, focusing on "comfort and wellbeing" of every person, the new campus "is intended to be a place of true connectivity and openness, which fully engages people and enhances their everyday lives."

The new campus is described as "a green campus designed for total interaction". 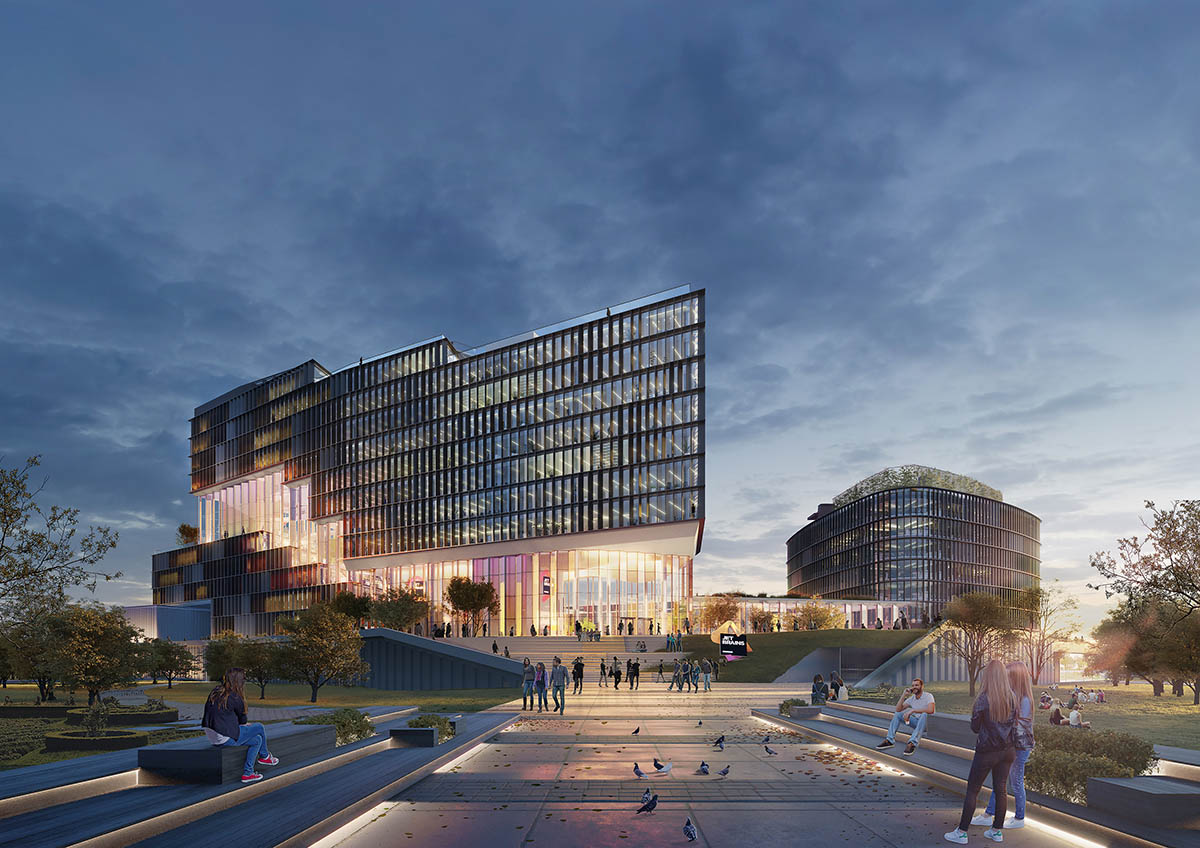 The new campus will provide efficient and flexible workspace for the organisation, as UNStudio team explained, it is aimed to "create a sense of belonging to its occupants - not just to the industry, but also to the community and the city of St. Petersburg."

"JetBrains is a highly innovative company. They are ambitious, possess a deep understanding of their workforce and have a very contemporary approach to the future of work," said Ben van Berkel, founder and principal of UNStudio.

"This meant that we were able to bring everything that we have learned from designing contemporary work spaces to this design and could create a warm, green, transparent, open and inviting office that stimulates total interaction," added Van Berkel. 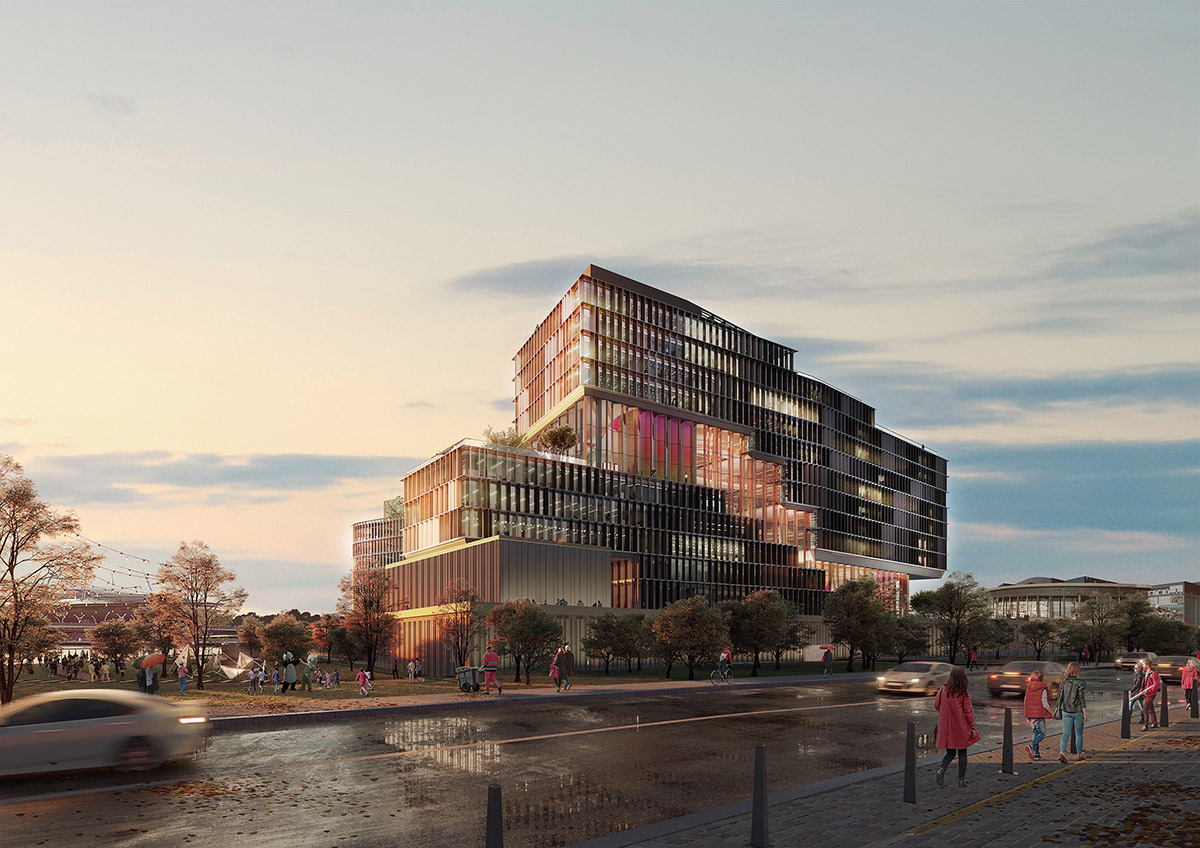 "Over the years, UNStudio has built up an extensive portfolio of office buildings and workspace designs," said the studio.

"This has provided us with a deep understanding of what is required of the optimal work environment and the positive impact such spaces can have on the health, wellbeing, creativity - and therefore productivity - of those using them."

"Within the design of such spaces, both physical vitality and psychological wellbeing are understood to be synonymous, while the creation of community is considered fundamental to the encouragement of communication, interaction, knowledge exchange and creativity," added UNStudio. 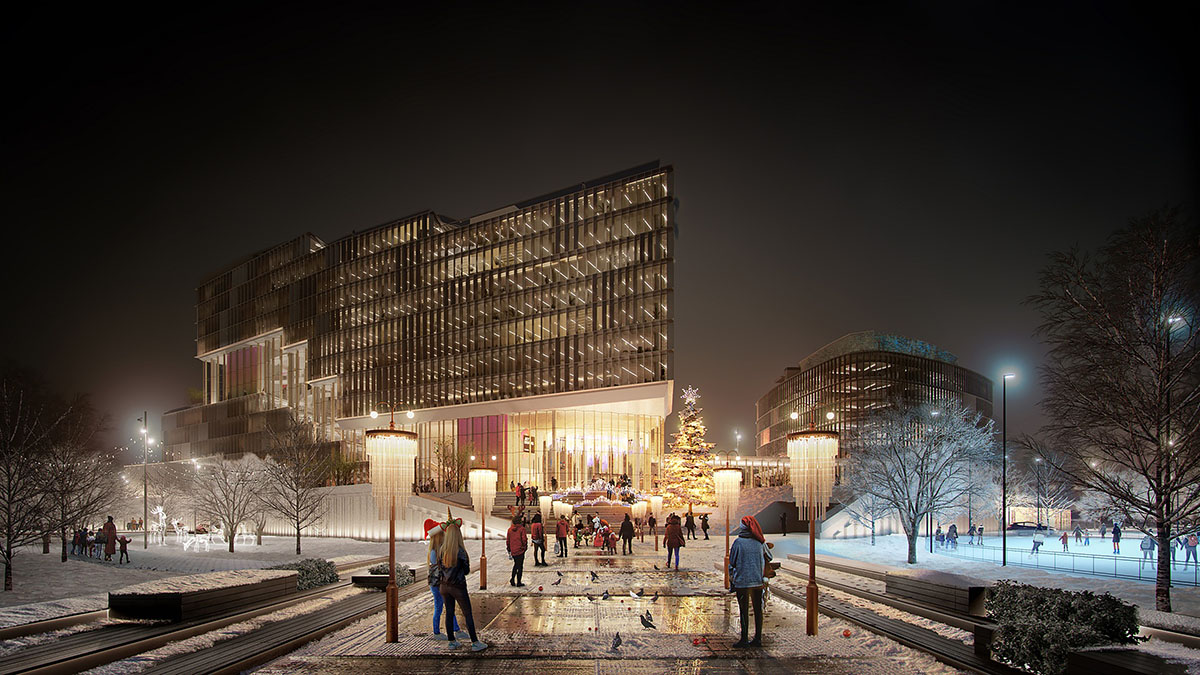 The new campus focuses on the comfort and wellbeing of every person who works there and of those who simply pass through. As UNStudio highlighted, the architects closely worked with JetBrains team to design the campus in full detail, to understand the company's approach to work culture, which led to custom made healthy work stations for all 1,000 newly housed employees.

The architects placed a large, vertically stepped, indoor atrium at the center of design. This generous open space is aimed to connect to an outdoor courtyard and outdoor terraces. The atrium is designed to form the core of the new JetBrains community, this core atrium will create the conditions for physical, mental, social and environmental health - elaborated with spiral staircases.

"This ample open space contrast to the office floors, which are based on team and individual focus, rather than an open-plan approach," the UNStudio team highlighted. 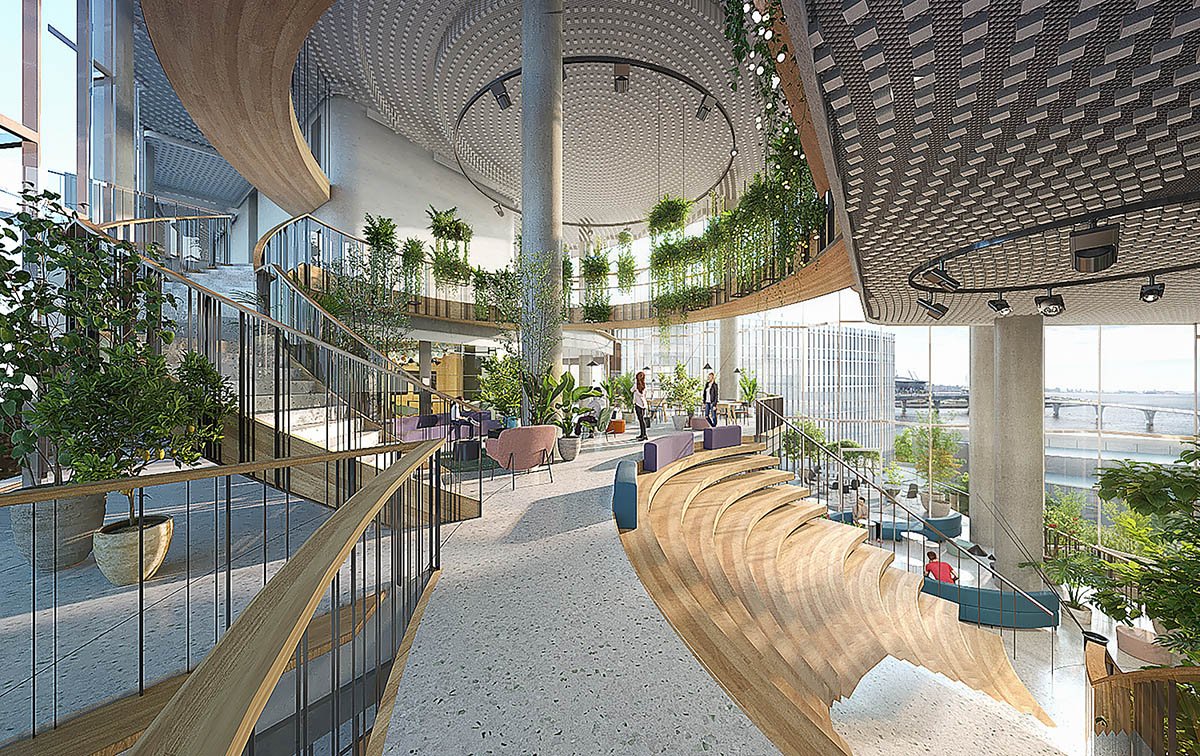 Central meeting rooms, breakout spaces, auditoriums and the central restaurant are all organised along the stepped atrium. Bridges span the large open areas, while carefully designed and intertwined biophilia forms the natural backdrop for all activities.

"We pay a great deal of attention to how people move through buildings. Office spaces are designed in such a way that they do not create simple linear corridors leading to dead ends, instead each corridor has a route that introduces a kind of landscape into the building," added Ben van Berkel.

"The possibility is created to take endless walks through the building, where there is a great deal of transparency, also towards the surrounding landscape." 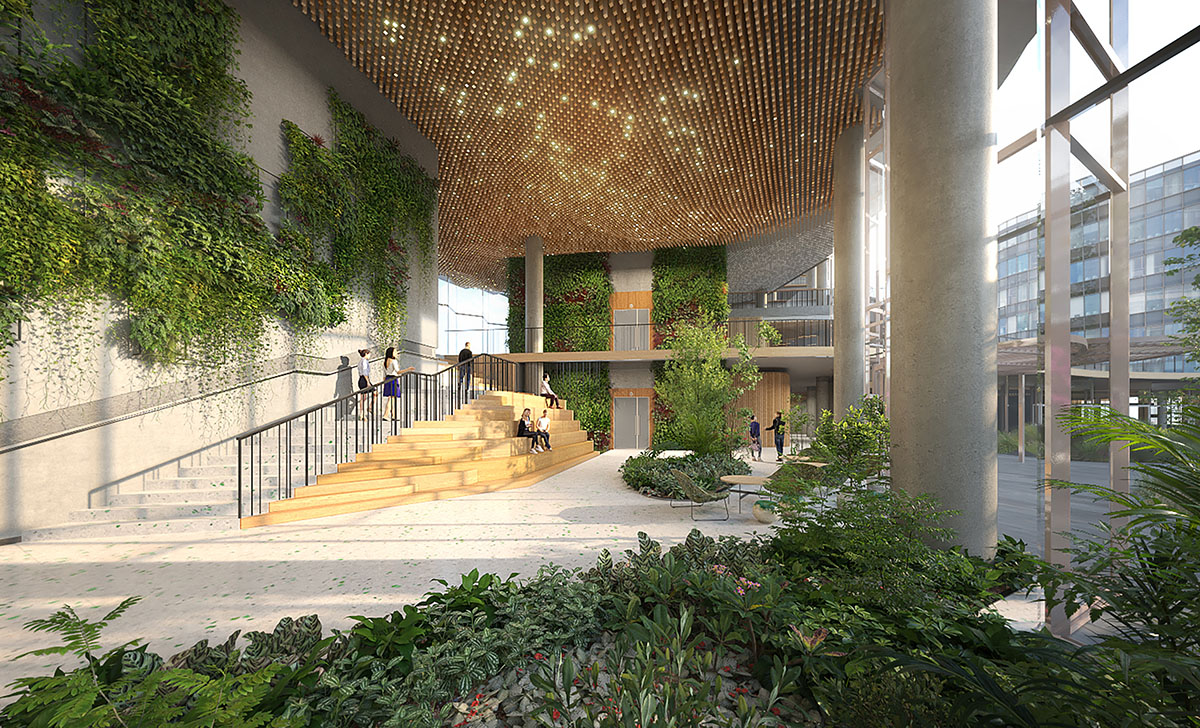 The imposing lobby, acting as a vestibule, creates the first views towards the atrium, while providing cloakroom facilities, showers and exercise spaces.

The courtyard on the podium level provides an intimate outdoor overflow space that is embraced by an active gallery connected to the existing office buildings. 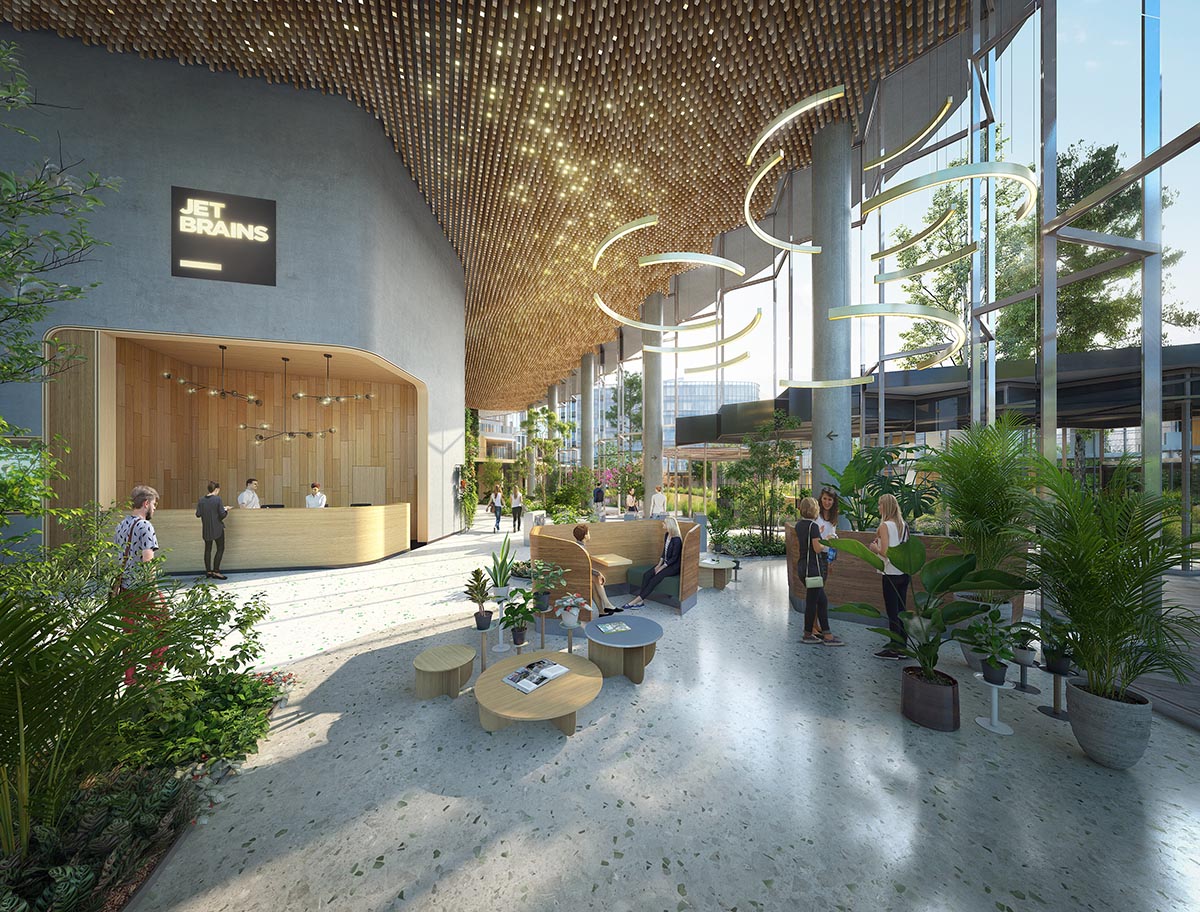 In UNStudio’s proposal the galleries are used as an orangery/winter garden for outdoor plants, which can then be placed outdoors in the summer months.

The facade design of the building, the design embraces a sustainable approach, thanks to its special façade configuration and materials, it will block heat gain while providing daylight. 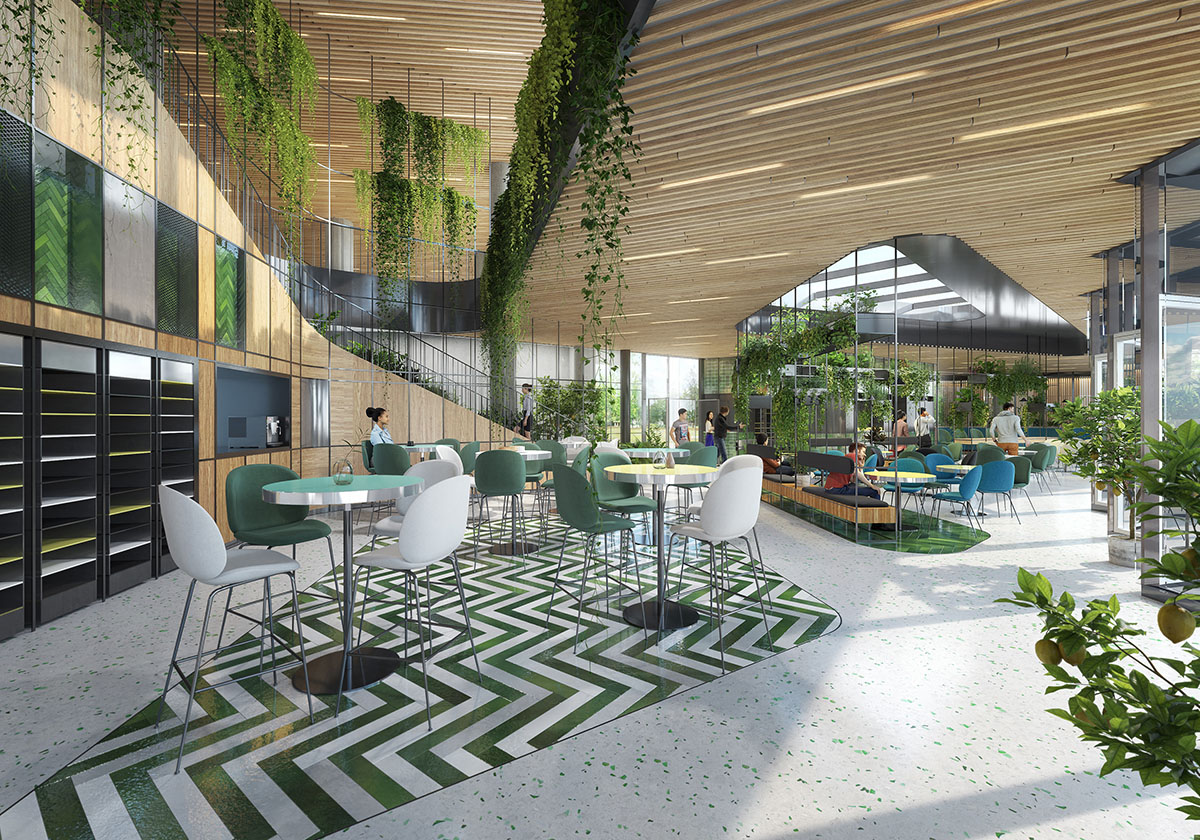 In addition to a soft acoustic shading device on the inside of the glazed skin, cantilevers shade the facade. The lower and upper volumes use a rational grid facade, composed of unitised elements.

Protruding glazed ceramic elements provide shading, reflect light, and create a tactility and reflection that will play with the constantly changing light of the skies over St. Petersburg and the Gulf. 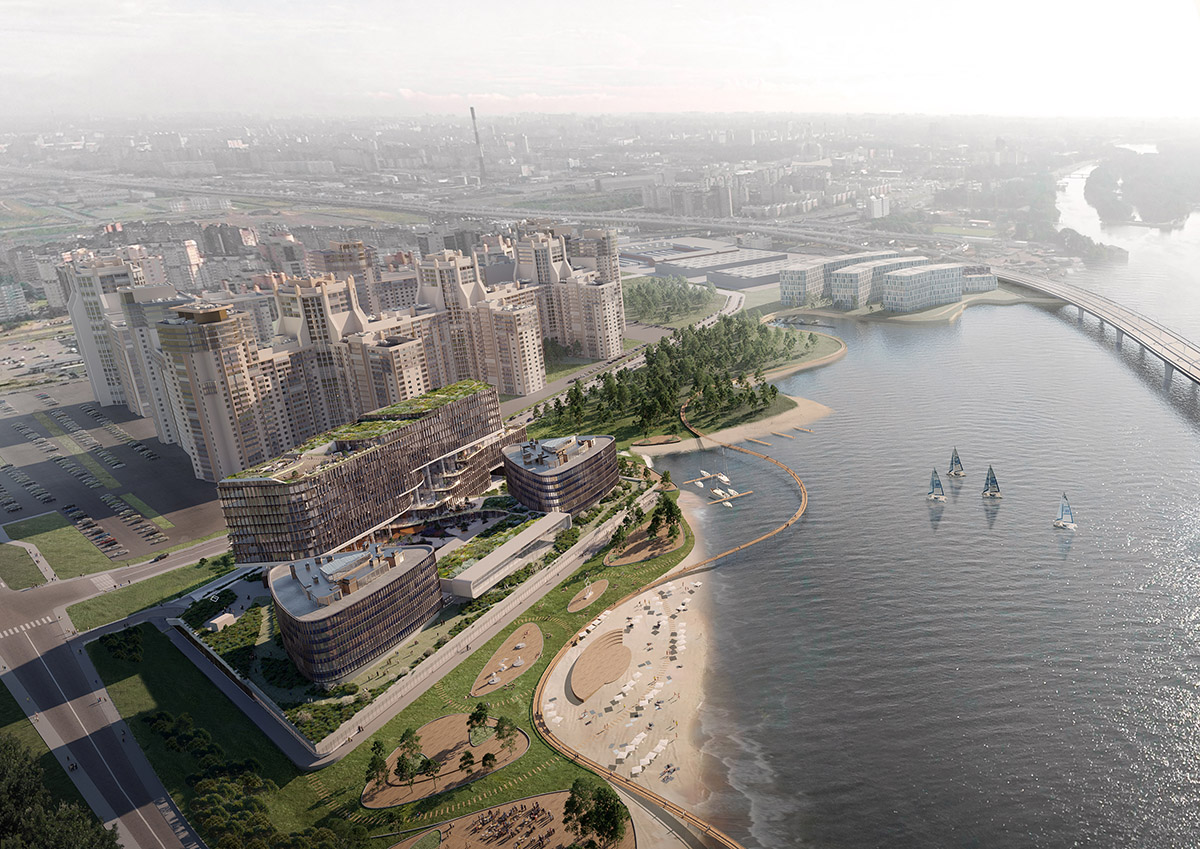 UNStudio received this commission to design the JetBrains office after winning and international competition at the end of 2019.

Its design proposal was selected as the winner, as it represented the consummate business card for the company, sustaining its precious workforce, and acting as an ambassador for new talent. 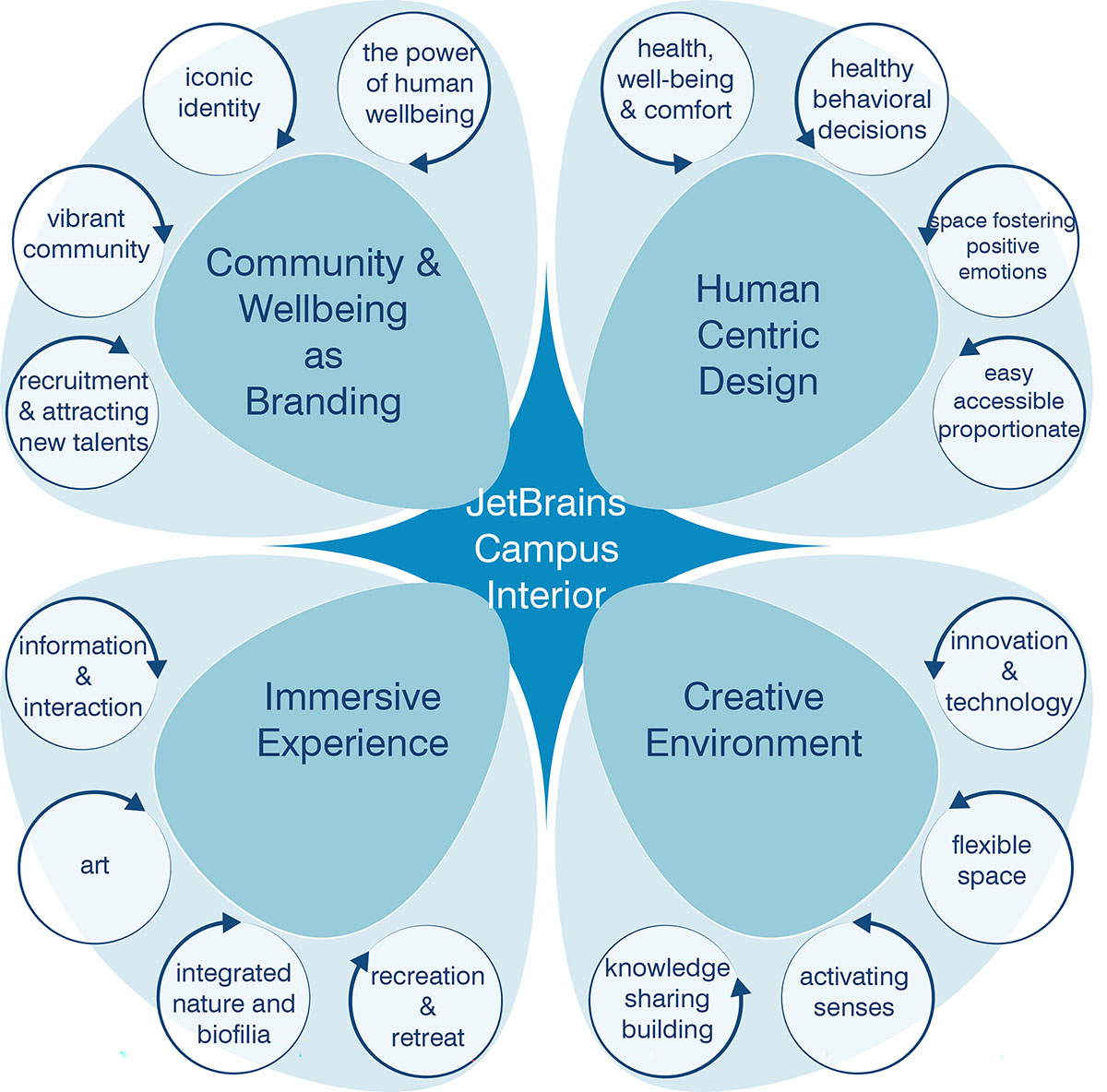 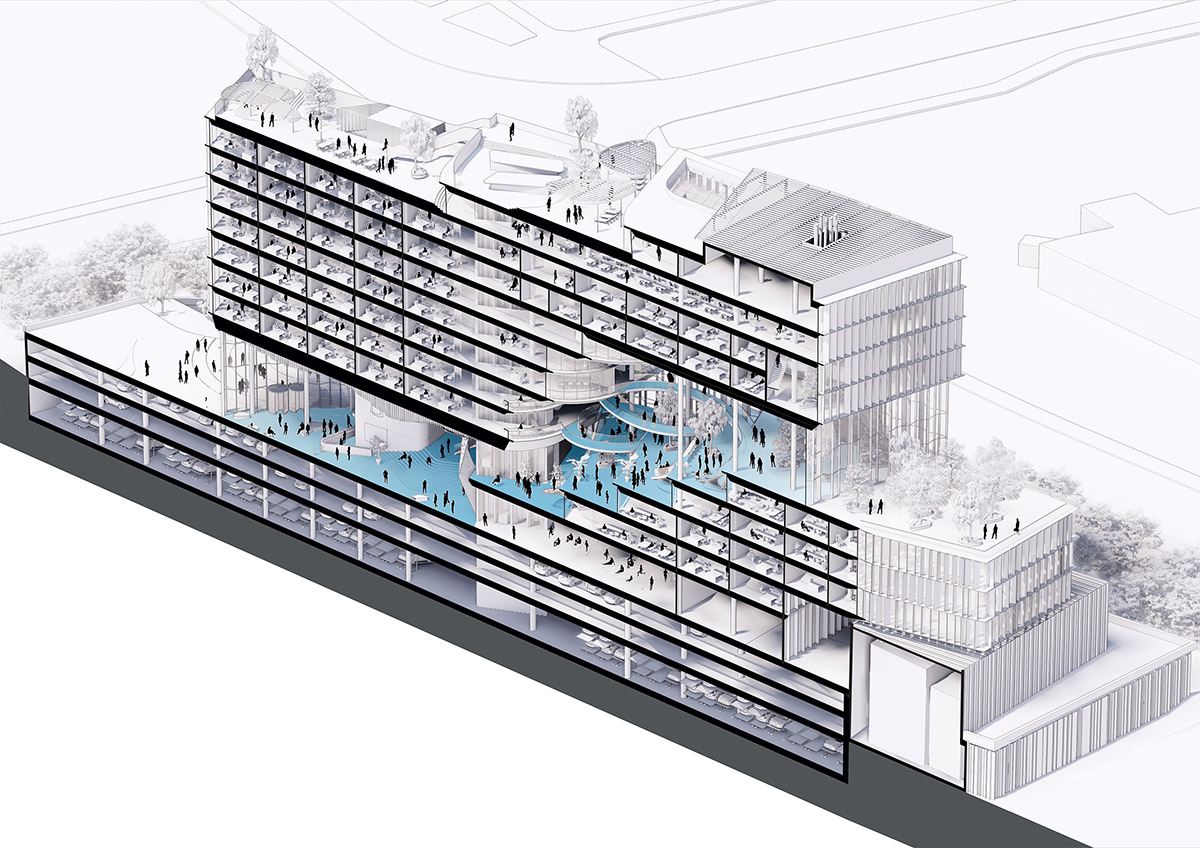 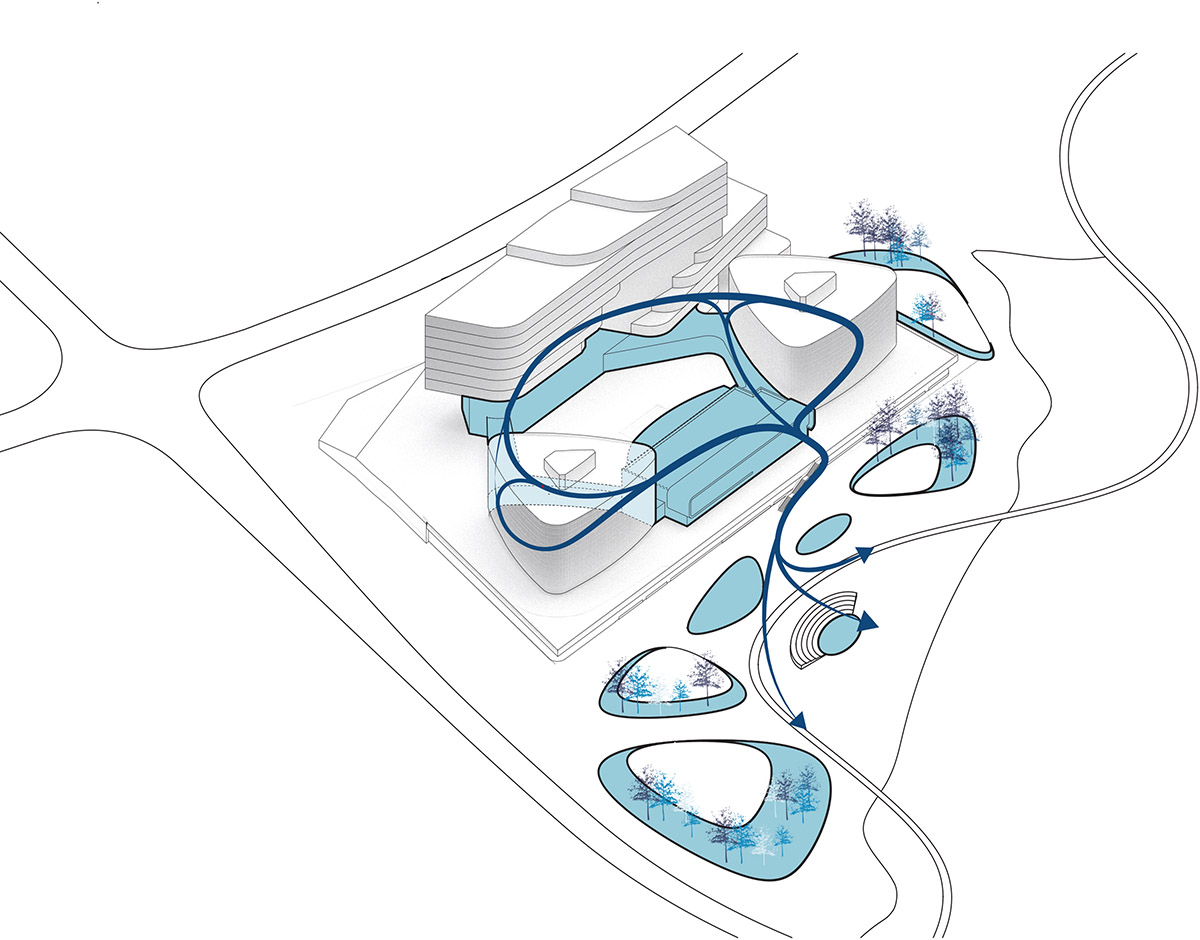 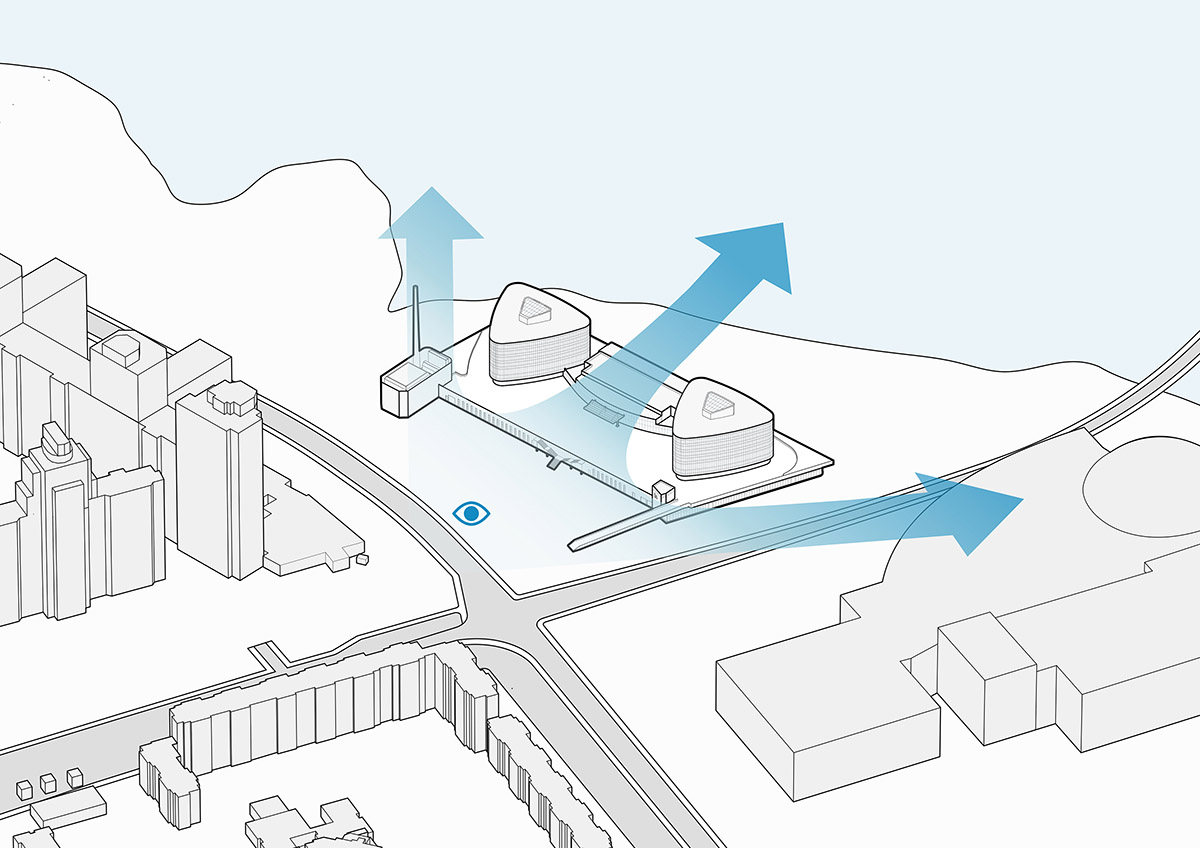 The project is in detailed design phase and the construction will start this year.