Danish architect Dorte Mandrup has completed the curvaceous Ilulissat Icefjord Centre on a rugged terrain in the UNESCO-protected area on the west coast of Greenland.

Named Ilulissat Icefjord Centre, the structure was designed as a new gathering place for local residents, businesses, climate researchers, climate debaters and global tourists, meeting in a dynamic learning and exhibition space in the harsh yet beautiful Arctic landscape surrounded by snow and ice.

Mandrup first revealed the proposal in 2016 after she won the international competition to design the Icefjord Centre in Ilulissat in summer 2016, and the visitor center has been completed and photographed by architectural photographer Adam Mørk. 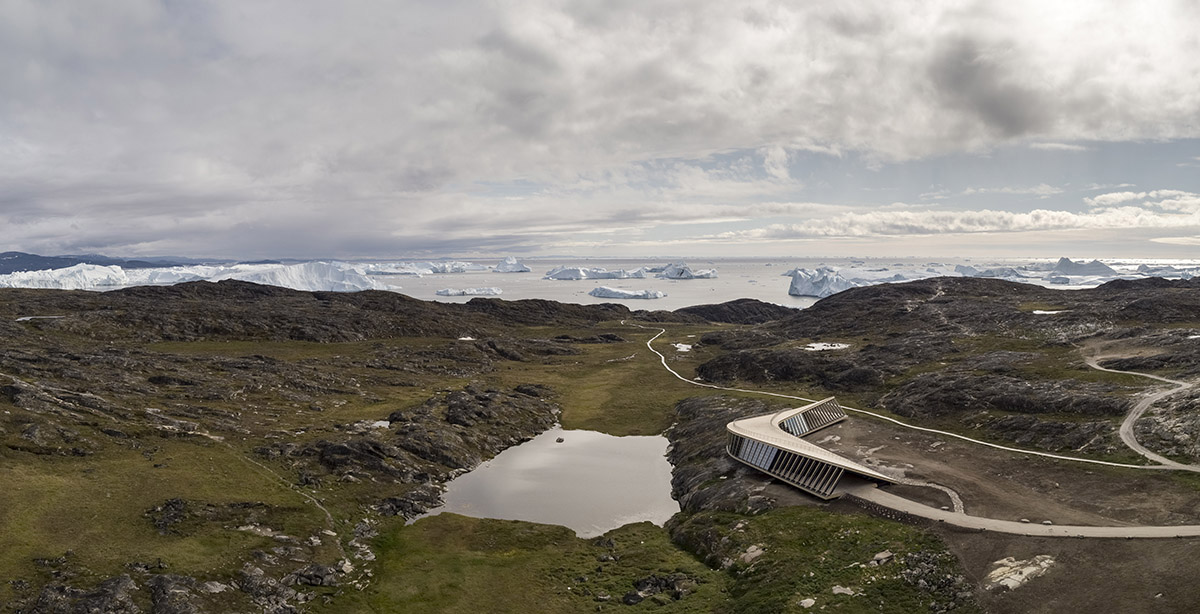 The building is overlooking the Kangia Icefjord on the west coast of Greenland, 250 km north of the Arctic Circle, and Mandrup's project is blended effortlessly into the landscape and offers a unique vantage point from which to experience the astonishing Icefjord and understand the dramatic consequences of climate change on this remarkable landscape. 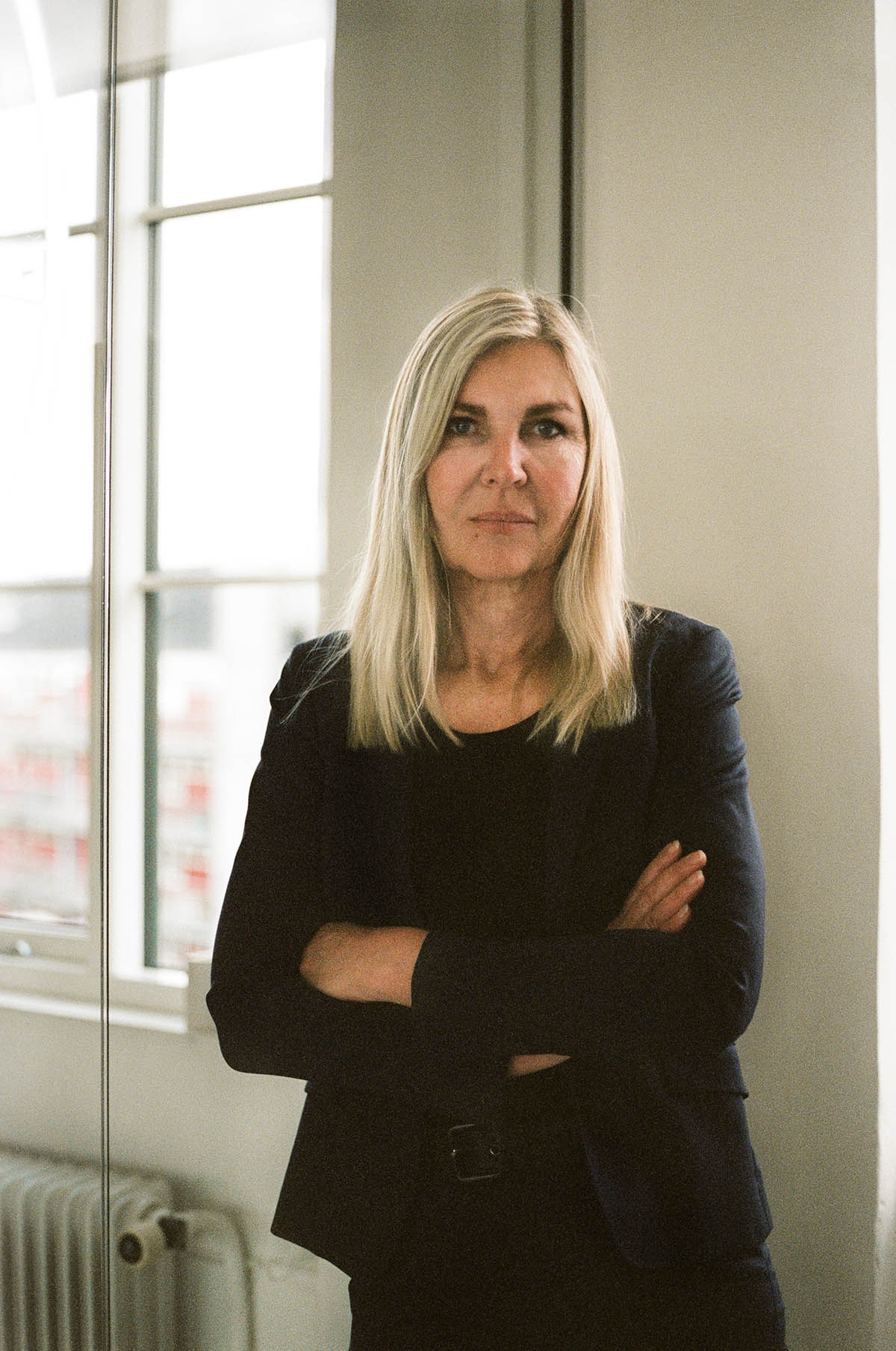 Founder and creative director Dorte Mandrup described the project as "a snowy owl’s flight through the landscape". The visitor centre has an aerodynamic and light structure that appears to levitate over the magnificent, rugged terrain - it looks like an outstretched wing gently touching the bedrock.

Due to its curved shape, the structure frames the views towards the fjord while preventing snow build-up and creating a shelter from the snow and freezing winds. 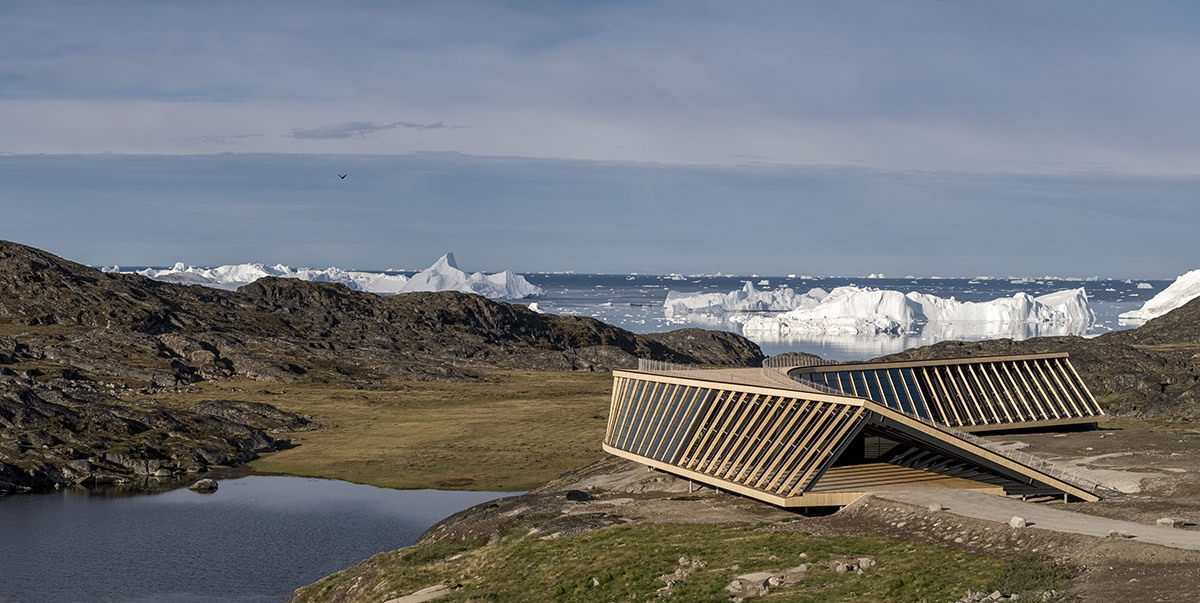 "The Icefjord Centre offers a refuge in the dramatic landscape and aims to become a natural gathering point from which you can experience the infinite, non-human scale of the Arctic wilderness, the transition between darkness and light, the midnight sun, and the Northern lights dancing across the sky," said Dorte Mandrup.

The building was designed as a year-round visitor centre and meeting place for local residents, companies, politicians, climate researchers and tourists.

The centre will also house exhibitions, a film theatre, a café and shop as well as research and educational facilities. 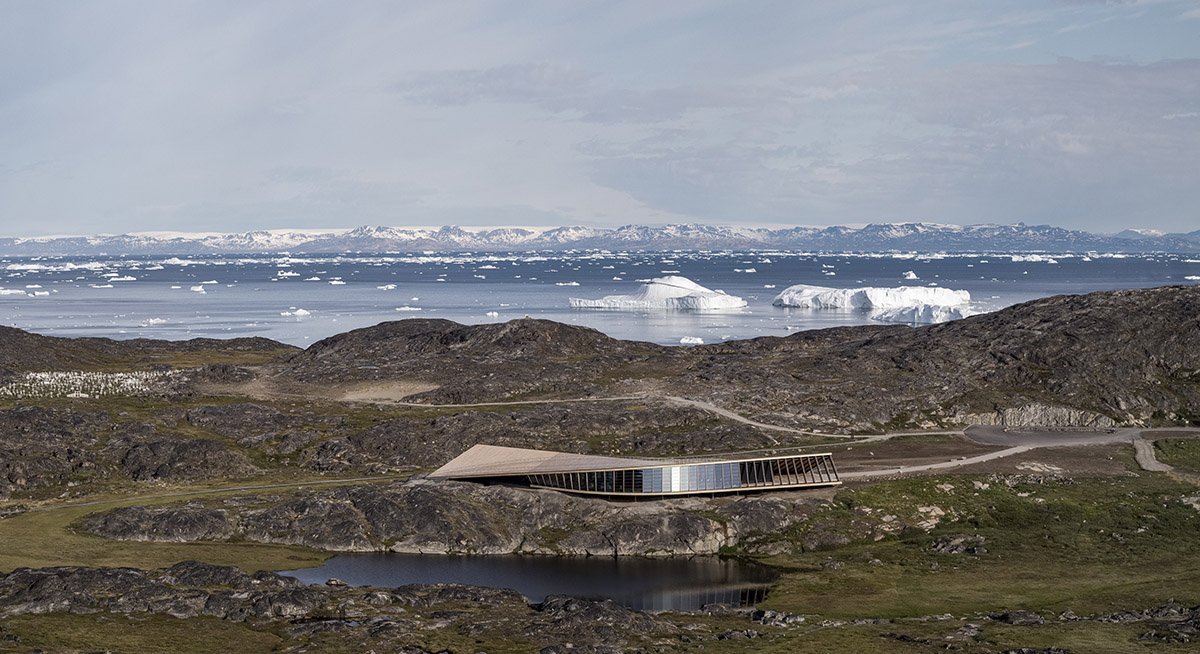 As the firm highlights, "it tells the story of ice, of humankind and evolution on both a local and global scale and relates to the history of time – sitting lightly on the Greenlandic bedrock – which is the oldest in the world."

The roof acts as a natural extension of the area’s hiking routes, leading visitors onto one of the best look-out spots to see the massive icebergs in the fjord and the surrounding landscape. 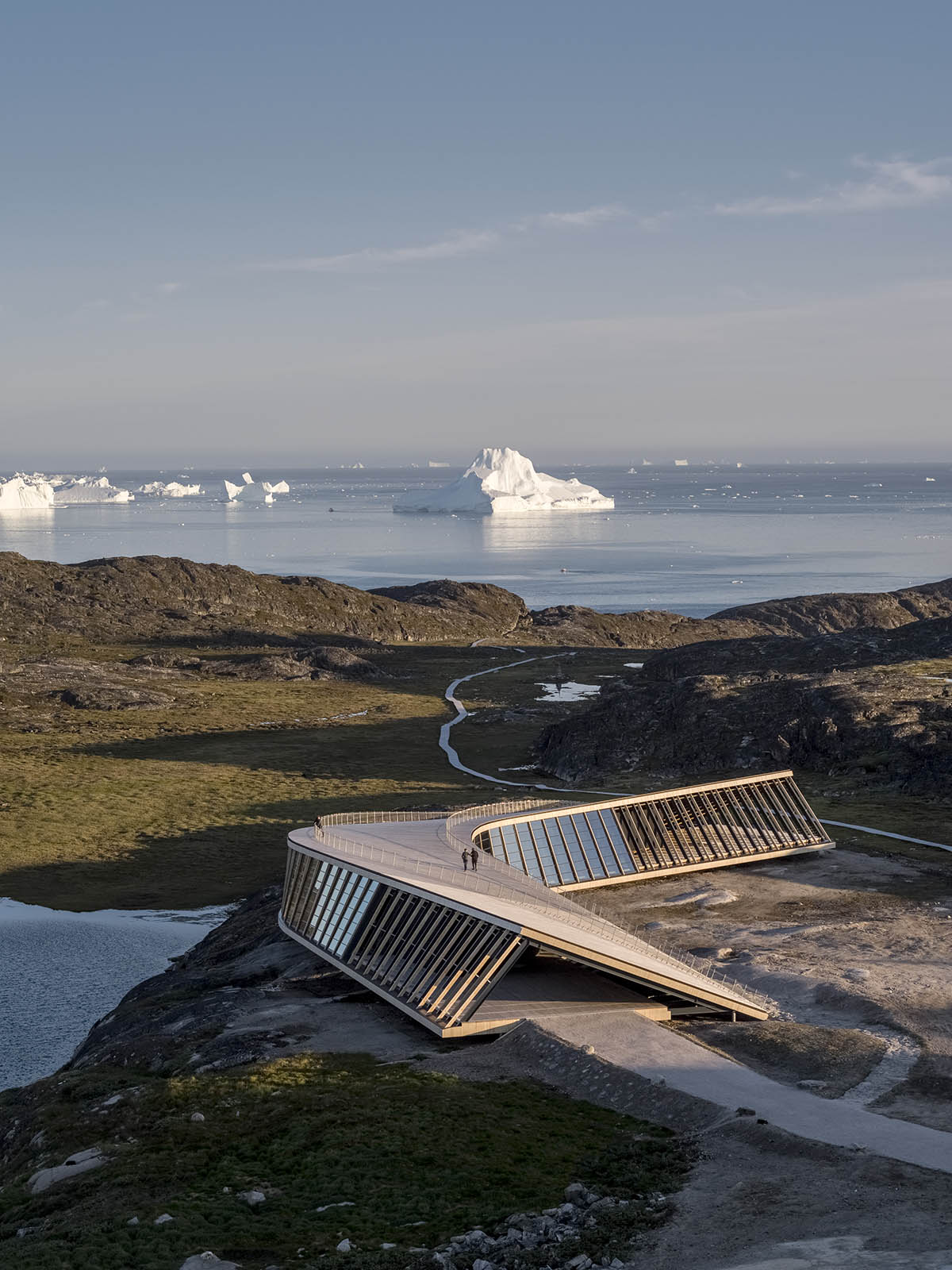 Conceived as "a public space" –a kind of gateway between the town of Ilulissat and the wilderness beyond", the structure is open to the public and free to access. At each end of the building there are also covered spaces, creating shelter, and gathering places.

When the first glimmer of light hits the horizon in January after six weeks of darkness, the community gathers in this area to celebrate the sun coming up for 40 minutes before leaving again. The hope is that the roof will become the place for this important gathering.

"The lightness of the structure makes the impact on the ancient bedrock and its fragile flora and fauna minimal," said Dorte Mandrup.

"Inside the centre, visitors can learn more about the nature and culture unfolding before their eyes." 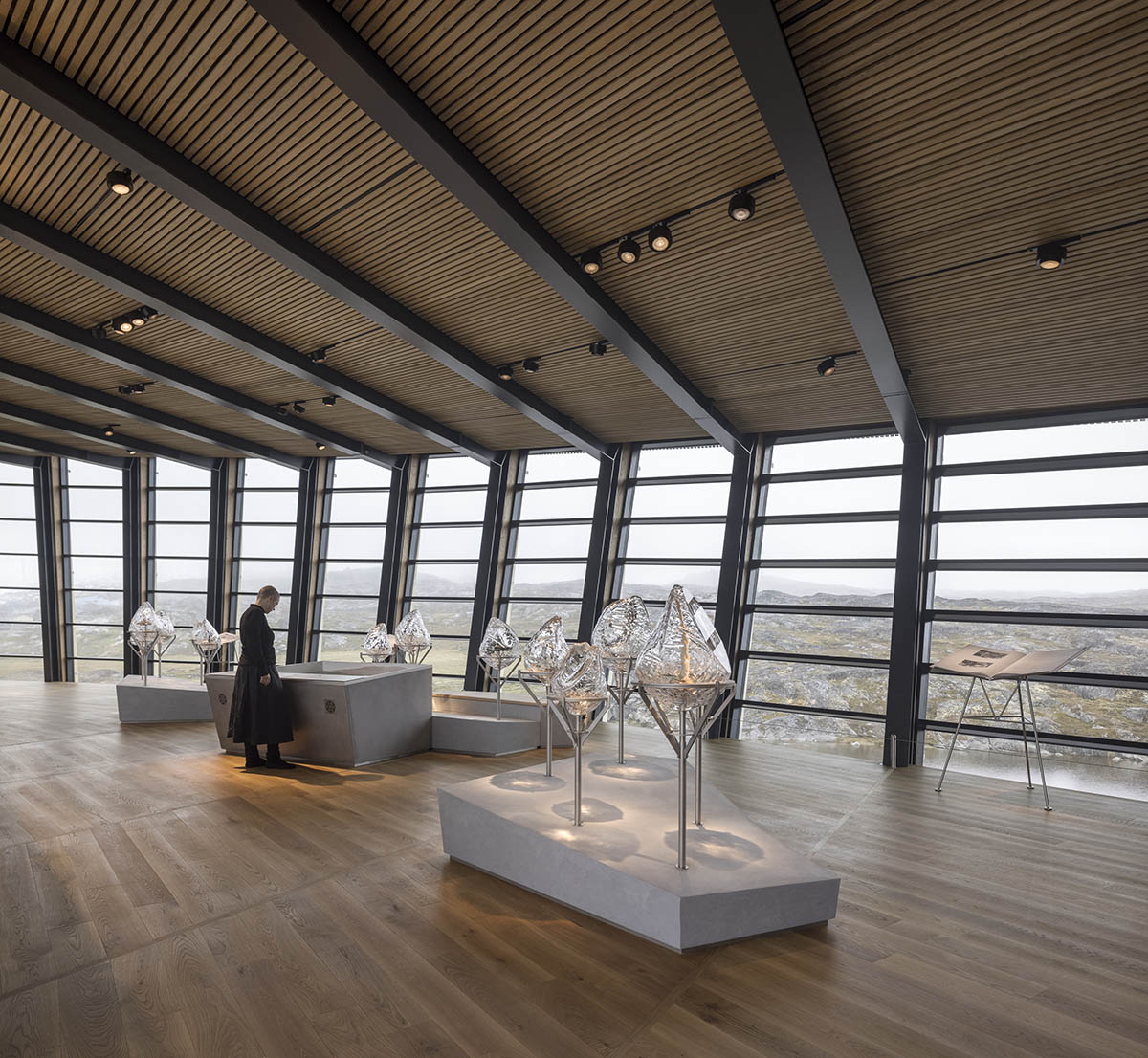 Visitors can experience the journey of ice from the birth of the ice crystal in Greenland's cold cloud layer, to when it becomes part of the inland ice and finally moves towards the glacier and breaks off in icebergs.

Also, how different Inuit cultures lived under these harsh conditions and how climate change manifests itself in the Arctic landscape.

The center features an exhibition, designed by JAC Studios, consisting of a landscape of ice flakes where archeological objects and films are exhibited in ice prisms of glass that visitors can move between.

The ice prisms are created from ice blocks collected in the Kangia Ice Fjord, 3D scanned, and mouth blown in glass. Central to the exhibition are authentic ice core drillings taken from the ice sheet, they tell the story about our culture and climate from 124.000 years BC to the present.

The Icefjord Centre is funded by a partnership between the Danish philanthropical foundation Realdania, Avannaata Kommunia and Naalakkersuisut - the government of Greenland.

Dorte Mandrup recently won a competition to design New Exilmuseum in Berlin. Mandrup is also designing a world class attraction landmark for The Whale in Norway.