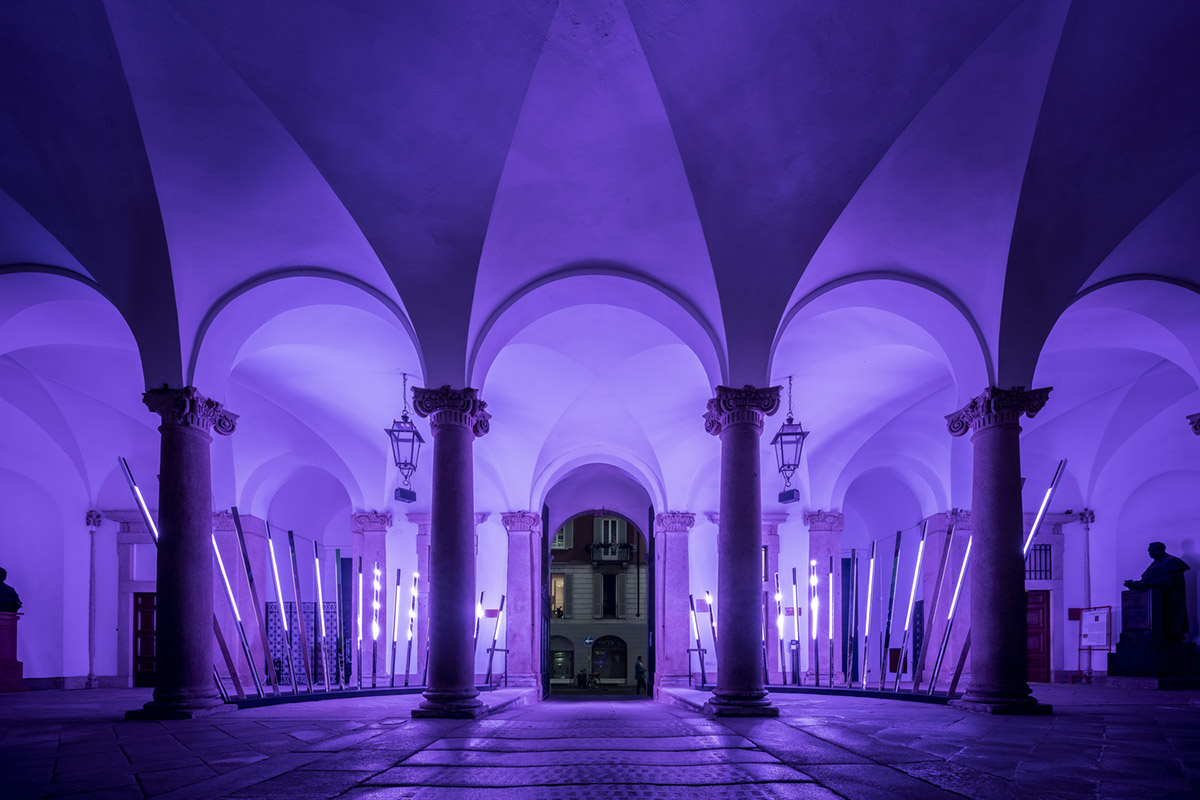 Bolzano and Berlin-based architecture studio noa* network of architecture has installed the Transsensorial Gateway made of 34 light beams that form the crown of lights at this year's Milan Design Week, Italy.

Situated in Università degli Studi di Milano, the installation is placed on either side of the entrance and is made of stainless steel and coated with mirror, amplifying the presence of the people encompassing the space around them. Named Transsensorial Gateway, the design proposes a kind of light and sound landscape, which welcomes visitors as they enter the exhibition.

"Architecture and people are closely intertwined and through the creation of a space, the connection between the individuals within a space is encouraged," said noa* network of architecture.

"This was the starting point for the installation," the studio added. 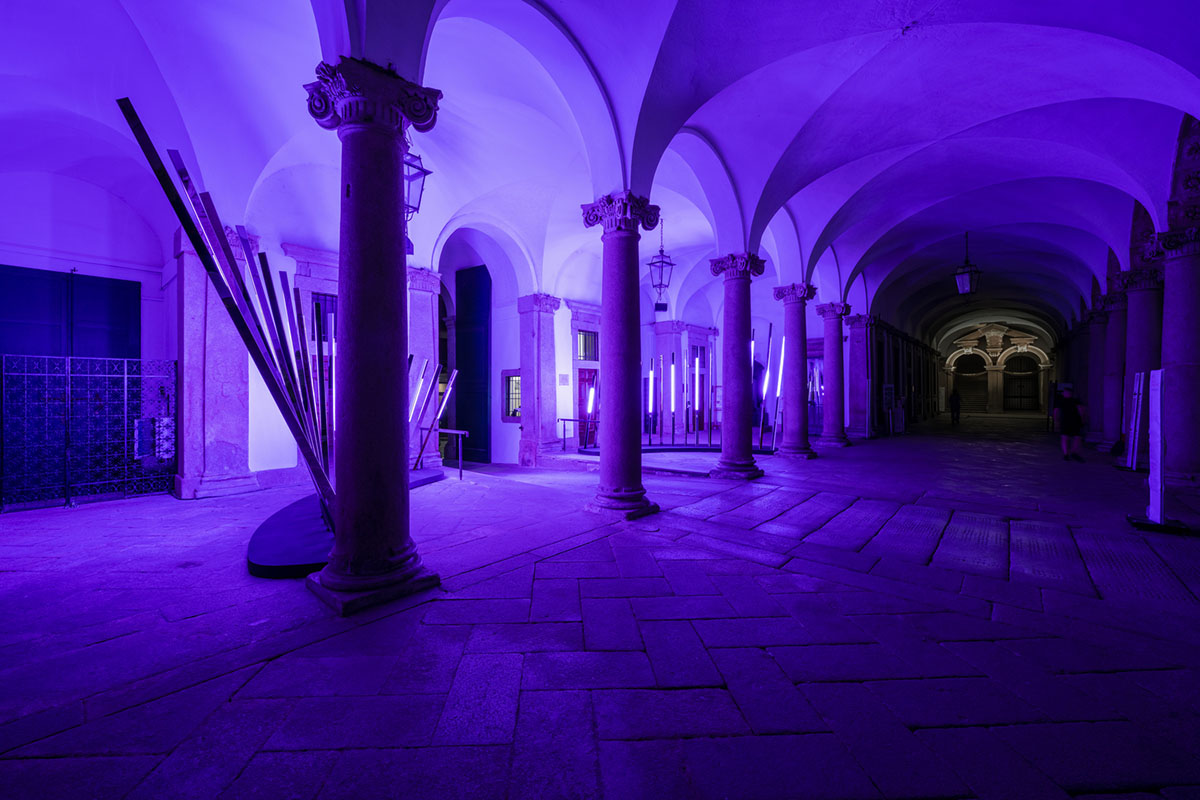 The architects place a crown of structural light-beams on either side of the doorway and opens up to catch visitors' attention, each beam has different heights, visually amplifying the sequence of the 17th-century portico that serves as the setting for the installation.

Designed as a sculptural work that combines various elements, the installation included light, sound and movement, in direct dialogue with people and with the space.

"The light reacts to the presence of visitors and at the same time interprets the way they relate to each other." 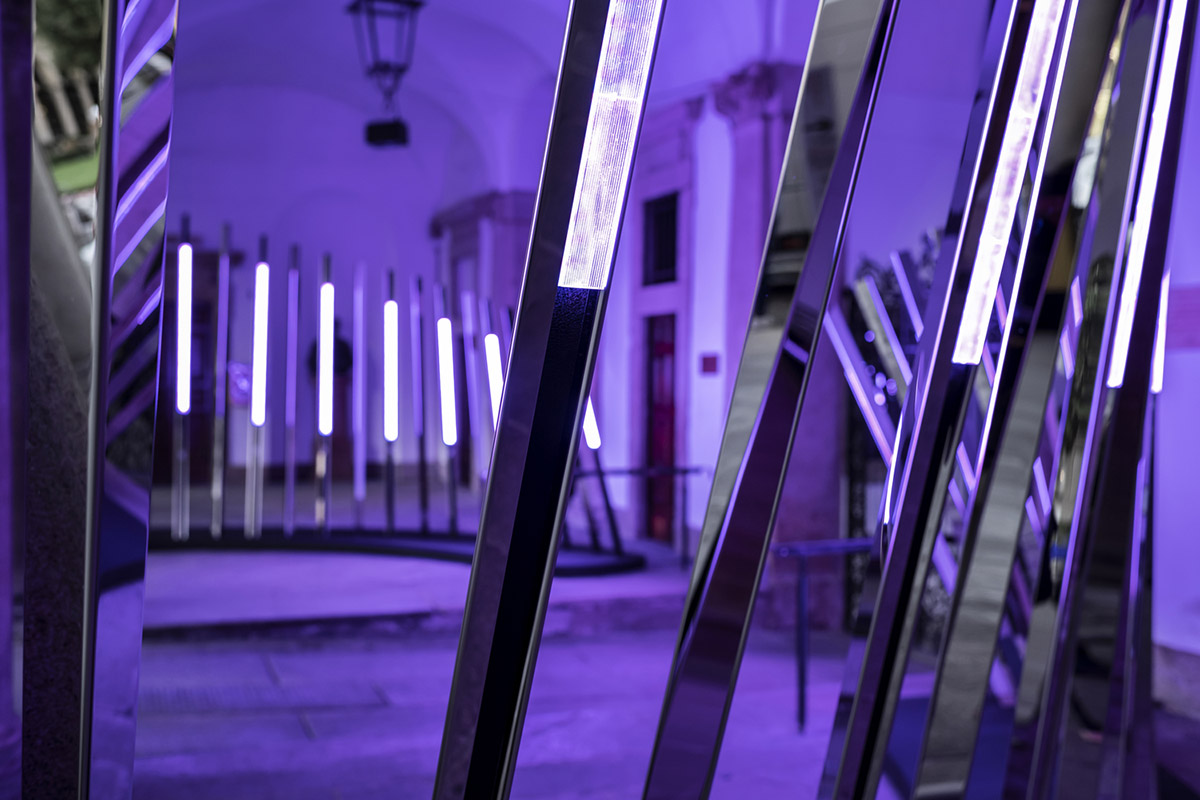 By creating a ‘transsensorial’ mechanism, a light and musical score is added that is not only closely related to mass and volume, and thus to the number of visitors, but also becomes the driving force behind the installation. 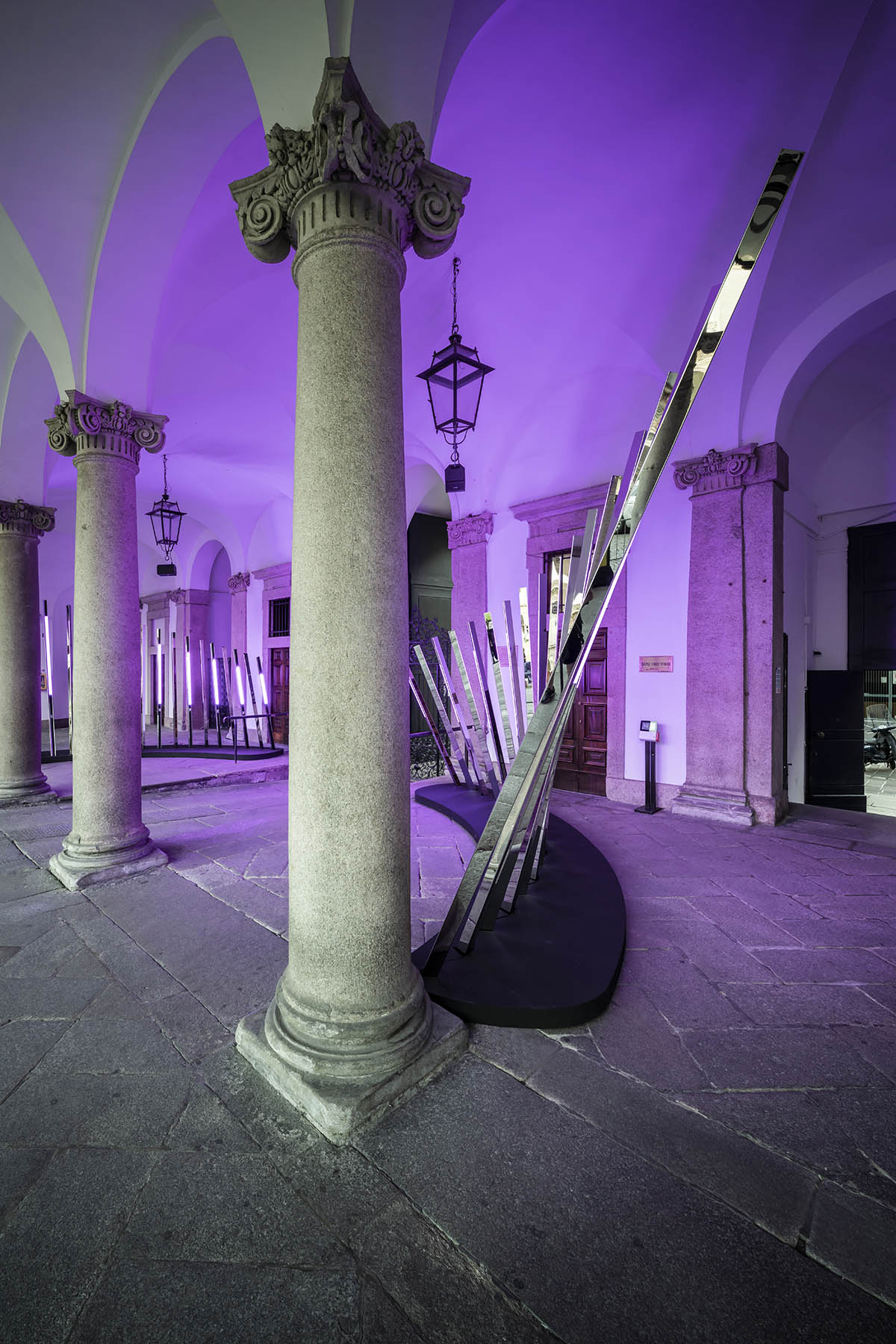 As noa* explains, the installation creates an original and unique choreography of light and sound, which further enriches the visitors’ emotional journey.

The architects designed each element varying in height from 2.50 m to 4.00 meters and has a triangular cross-section of 7x7 cm2. The technical skill and know-how of the South Tyrolean company EWO has made it possible to translate the concept of interactivity into a functioning system of light and technology.

The steal light-beams are illuminated by LED units which are installed vertically and equipped with an innovative anti-glare technology called ewoLightTile. 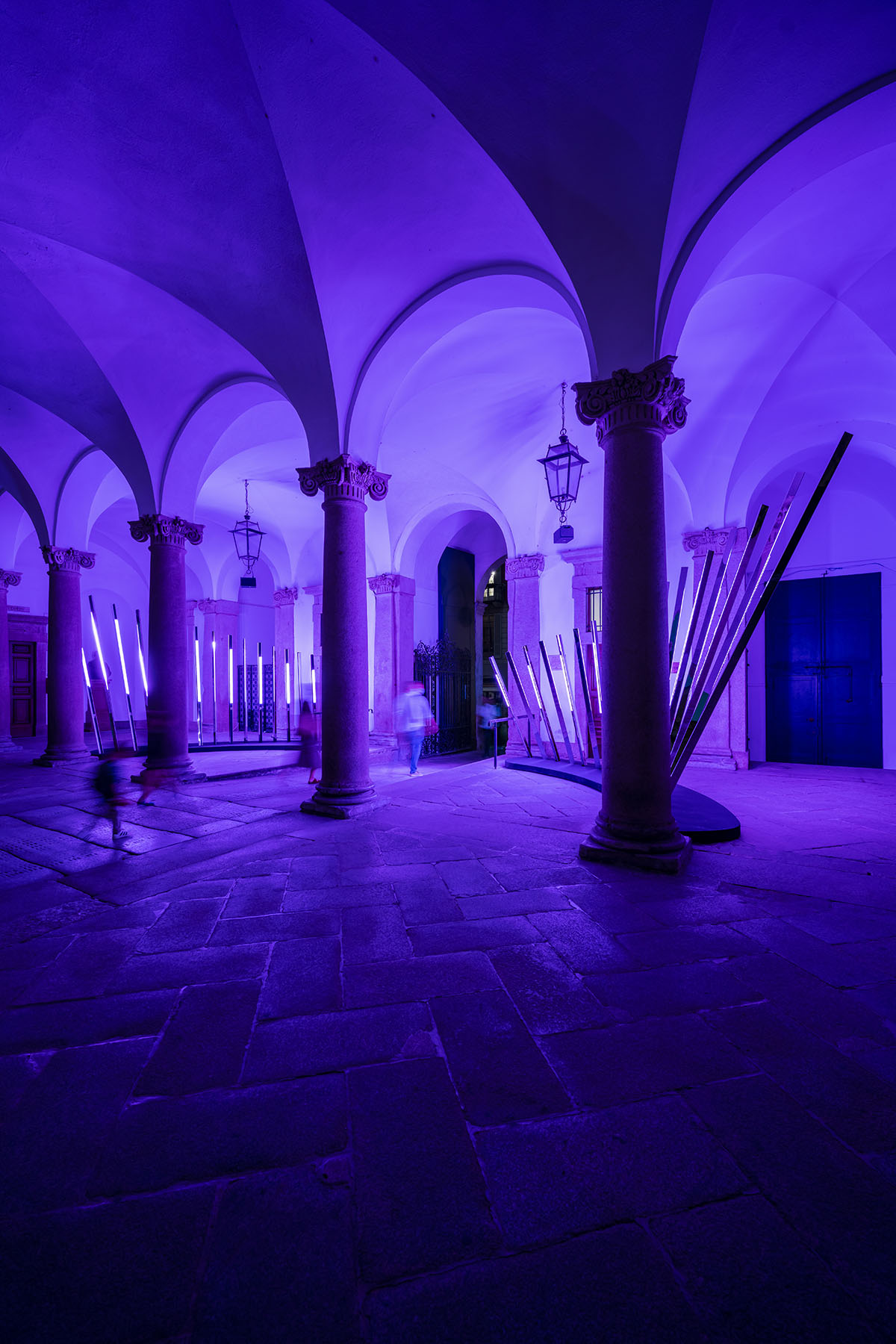 The sound was created by Ebner Film + Music and was designed especially for this installation and programmed to react to the diversity of situations detected by the sensors. 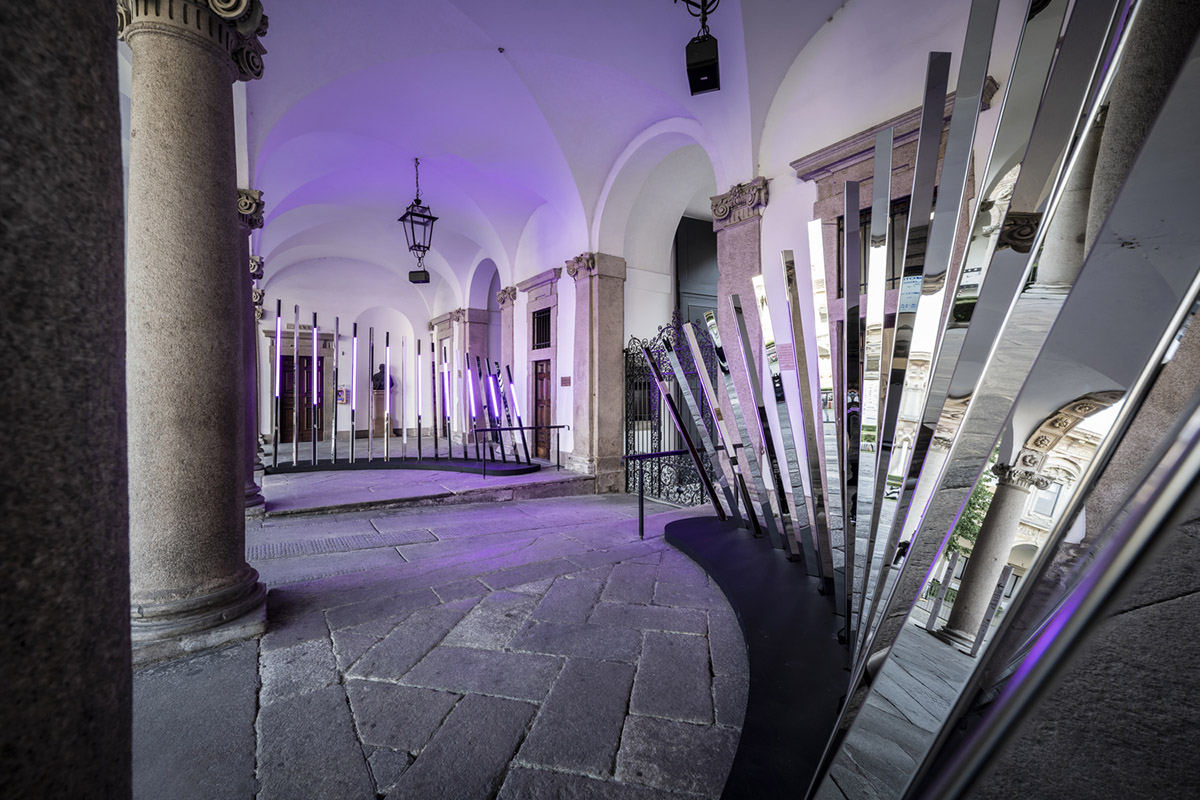 The installation is regulated by loudspeakers placed in the exhibition area of the installation, while the sensors that control light and sound according to the interactions between people are distributed along the 34 beams. 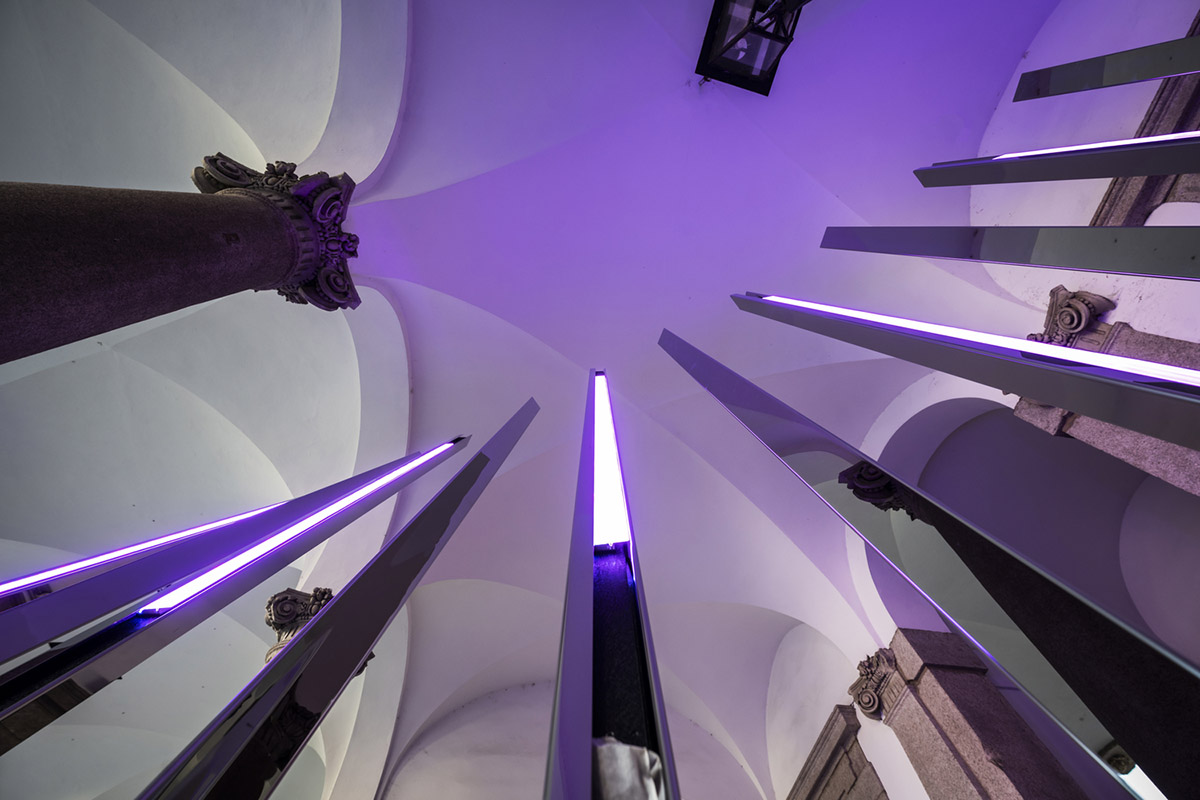 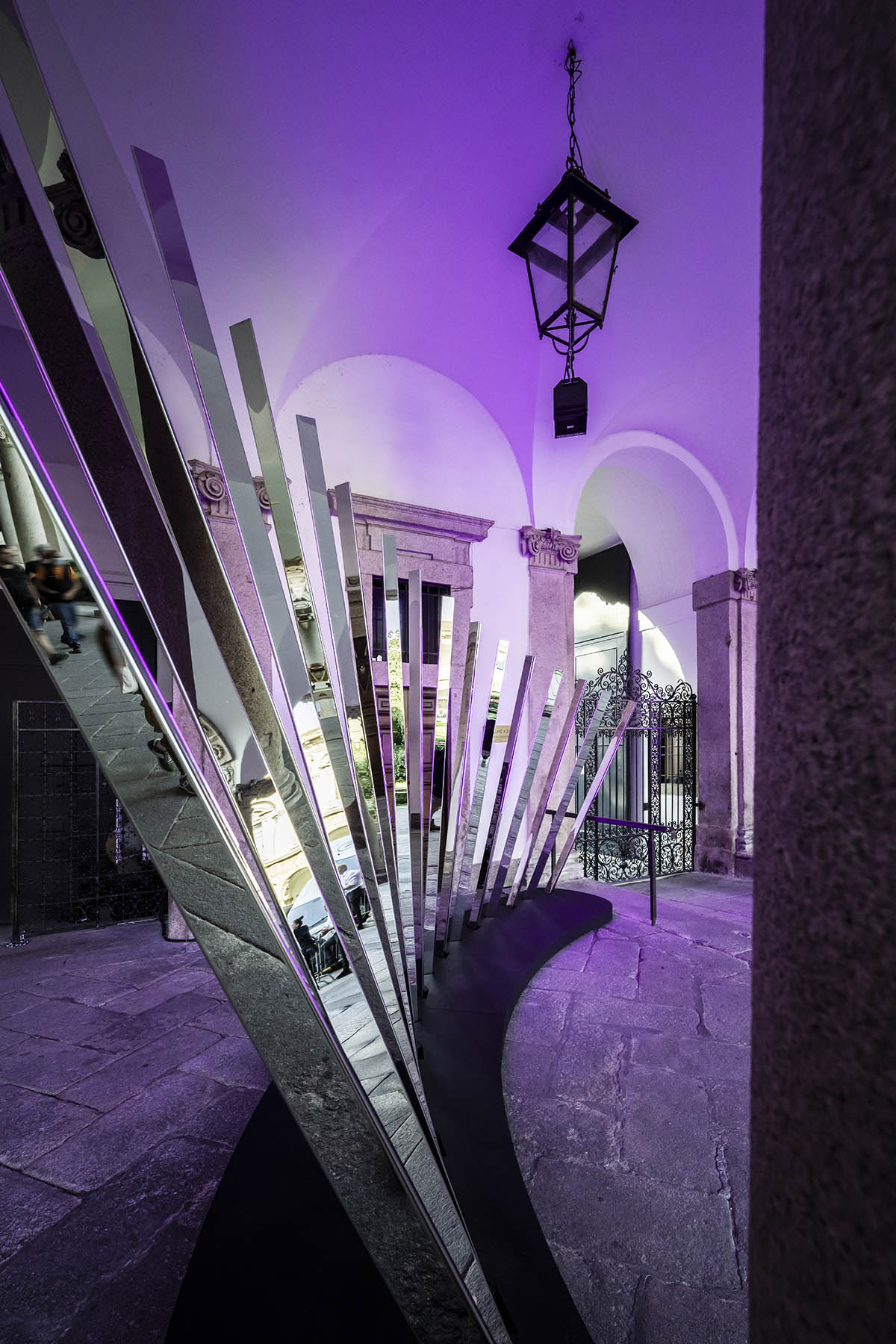 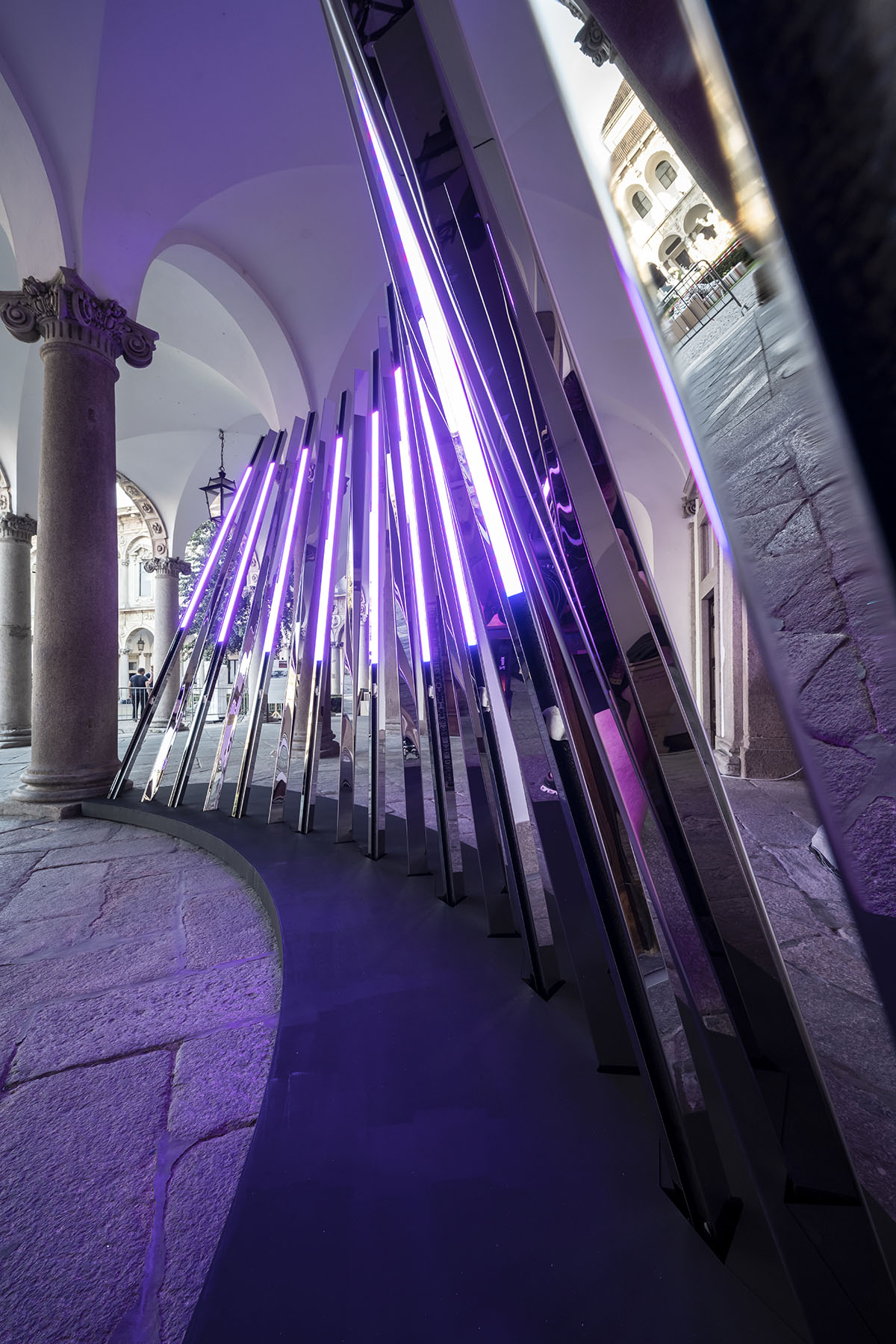 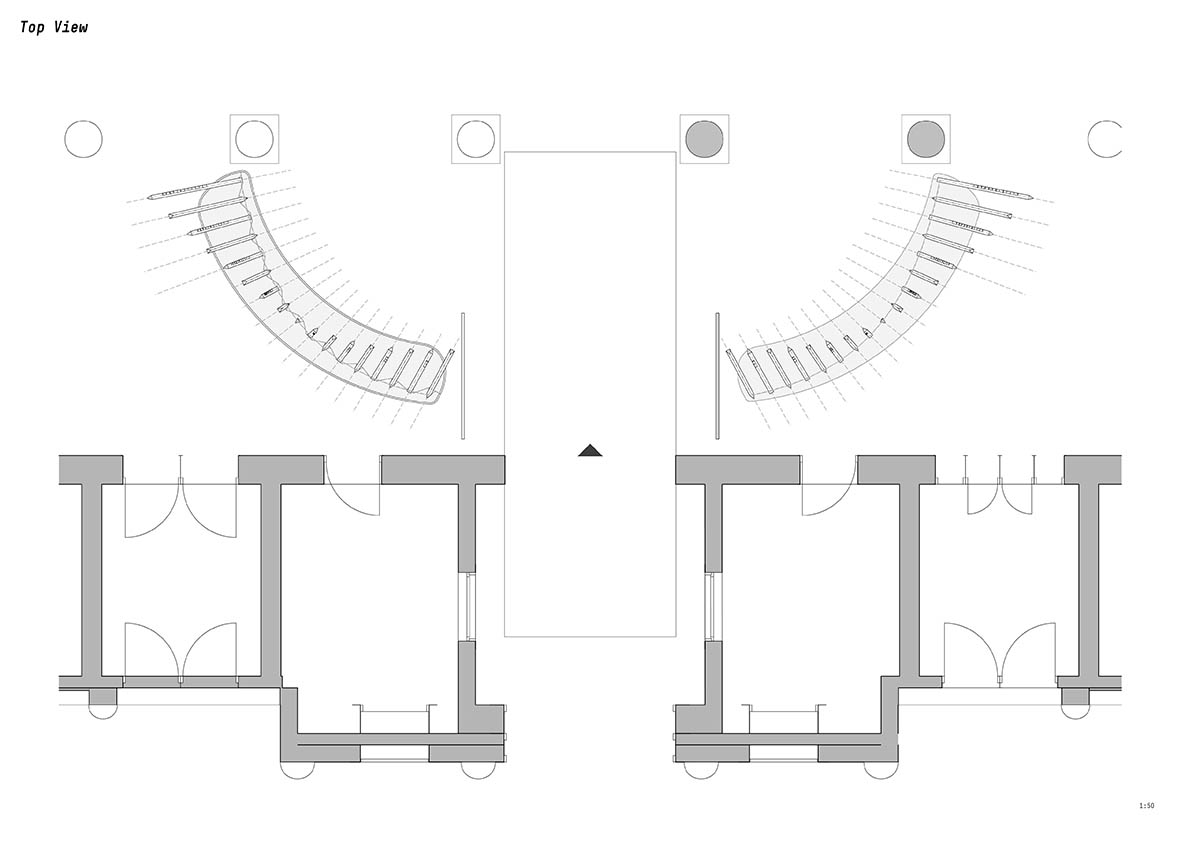 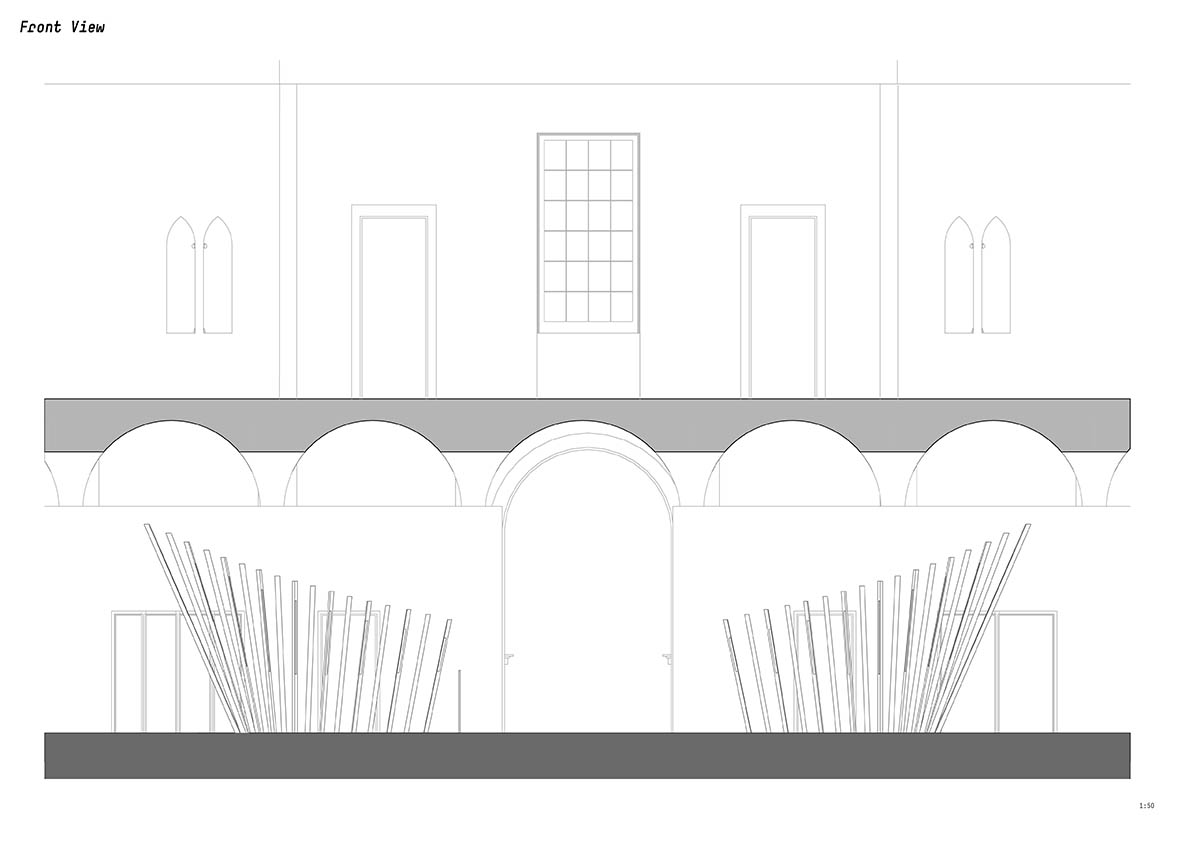 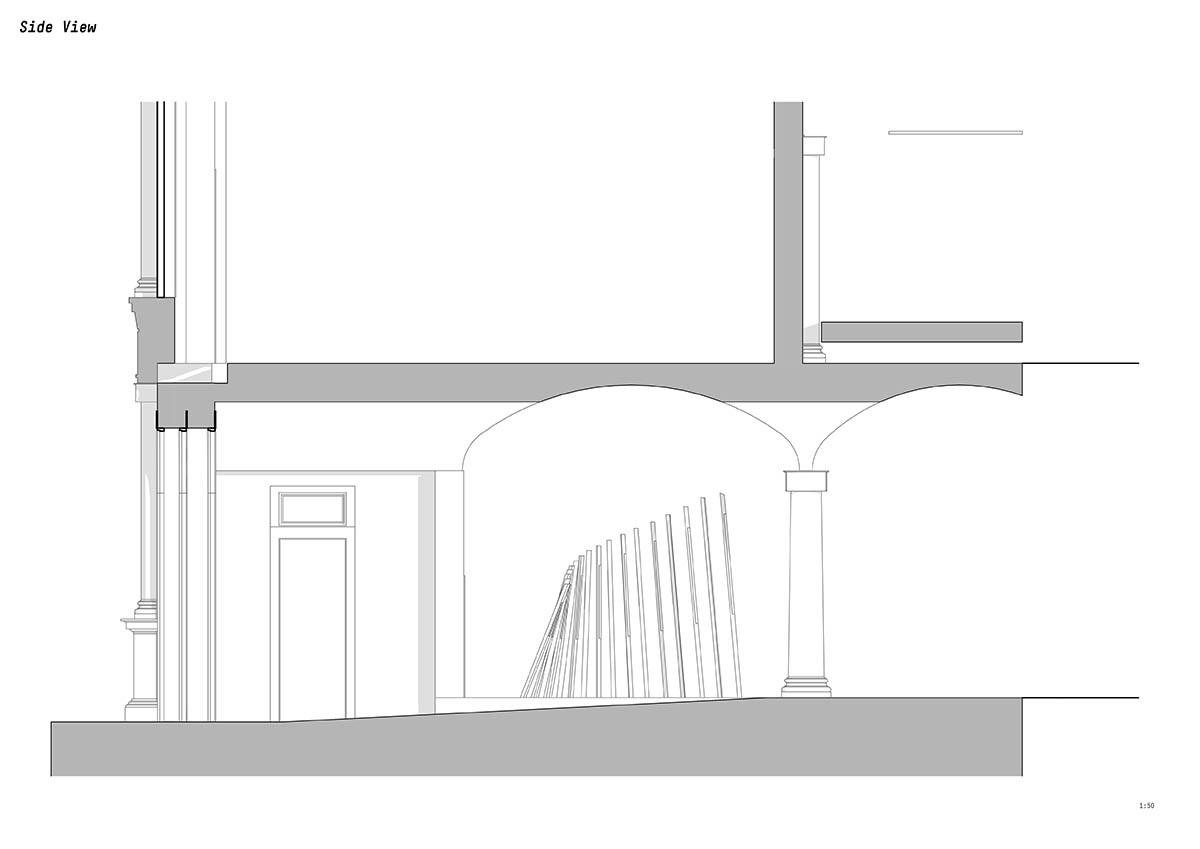 noa* recently transformed a 17th-century monastery into a hotel and spa in Arco, Alto Garda, Italy.