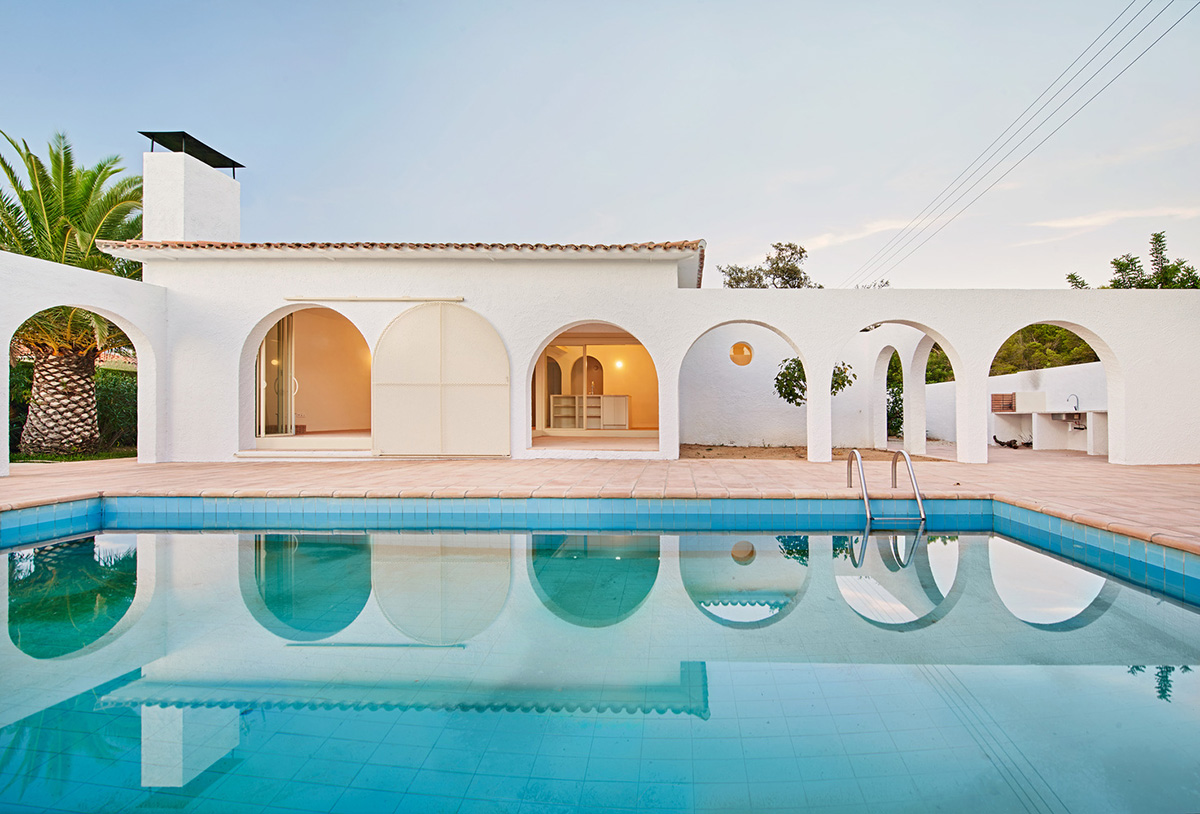 Designed as a holiday home in Mont-roig del Camp, Spain, the house is owned by three sisters to use the property as a summer house which was originally built in the 1960s on the Mediterranean coast of Spain. 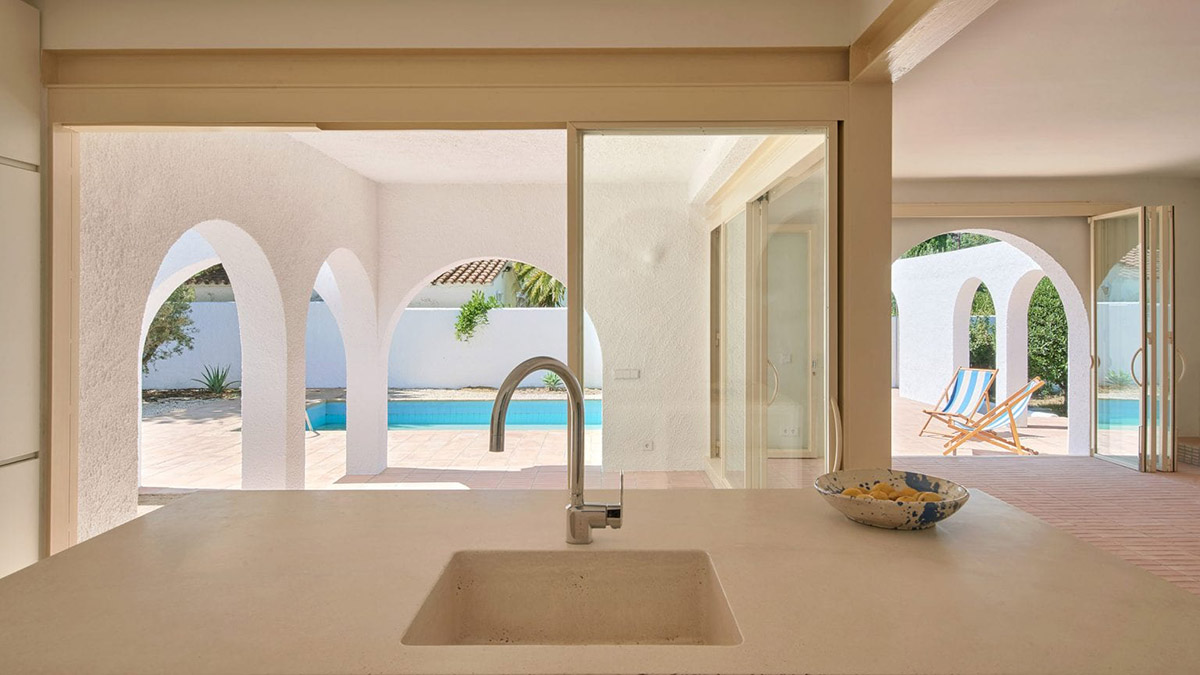 This renovated holiday house aims to blend boundaries between inside and outside, acting openly diverse, as wide and sunny as intimate and shady.

By offering coves, topographies, loggias, and gardens, the house is perceived in a spatial continuum that intends to provide a landscape of vitality and delight. 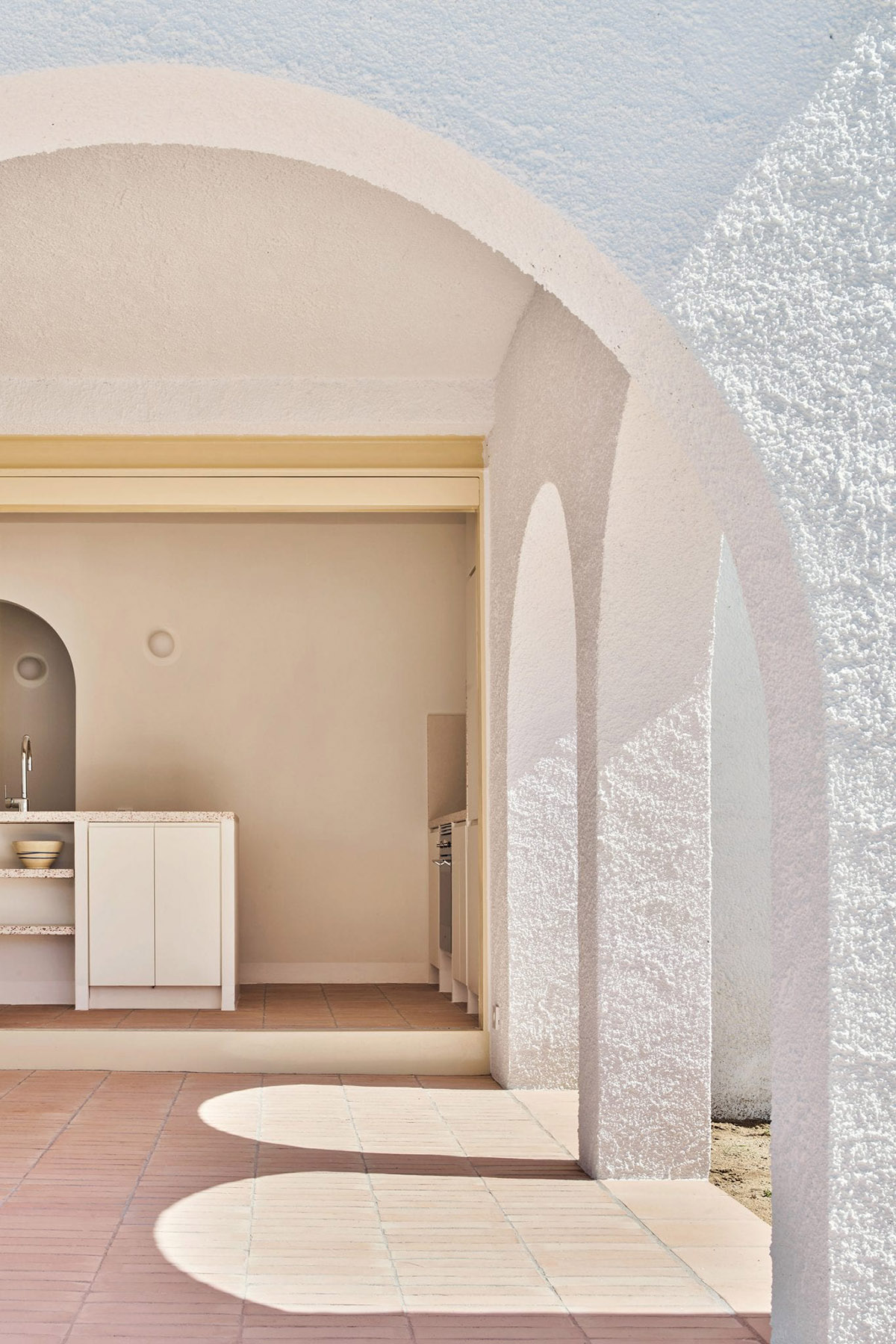 Soft color palette dominates both inside and outside and create continuous flow in between spaces. The team wanted to create a holiday home that is gregarious and playful.

"The preexistence of a walled enclosure in the garden—which distinguished two areas of the surrounding patios, while connecting them by means of four arches—is echoed throughout the site," said the architects. 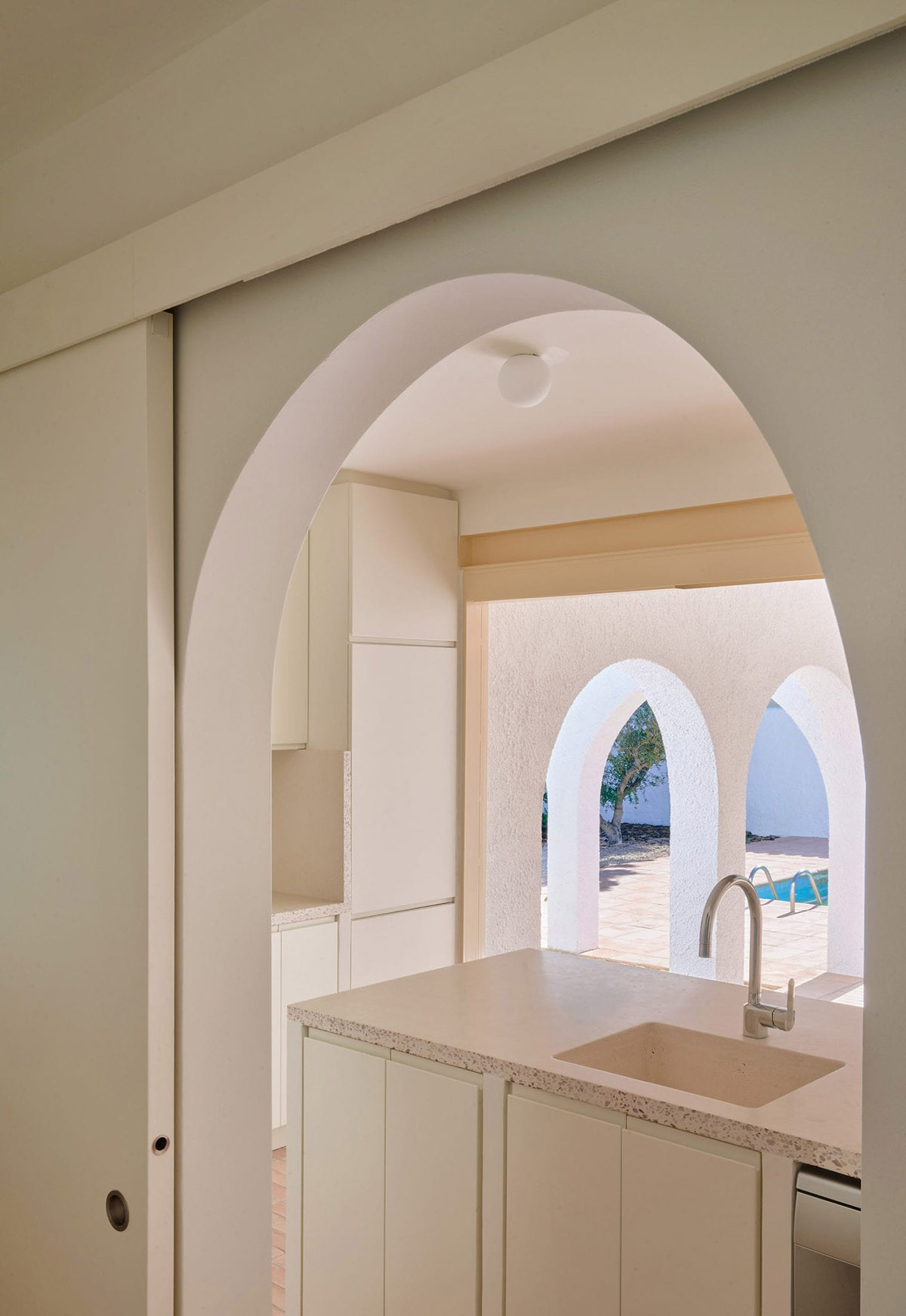 Maintaining the existing character of the house, the studio devised a gregarious and playful matrix of exterior and interior rooms - all these space have different dimensions, character, light, and temperature and all of them interconnected by both old and new arches.

As the architects highlight, the former house was based on closed spatiality with segregated and predetermined uses, based on traditional domestic privacy. 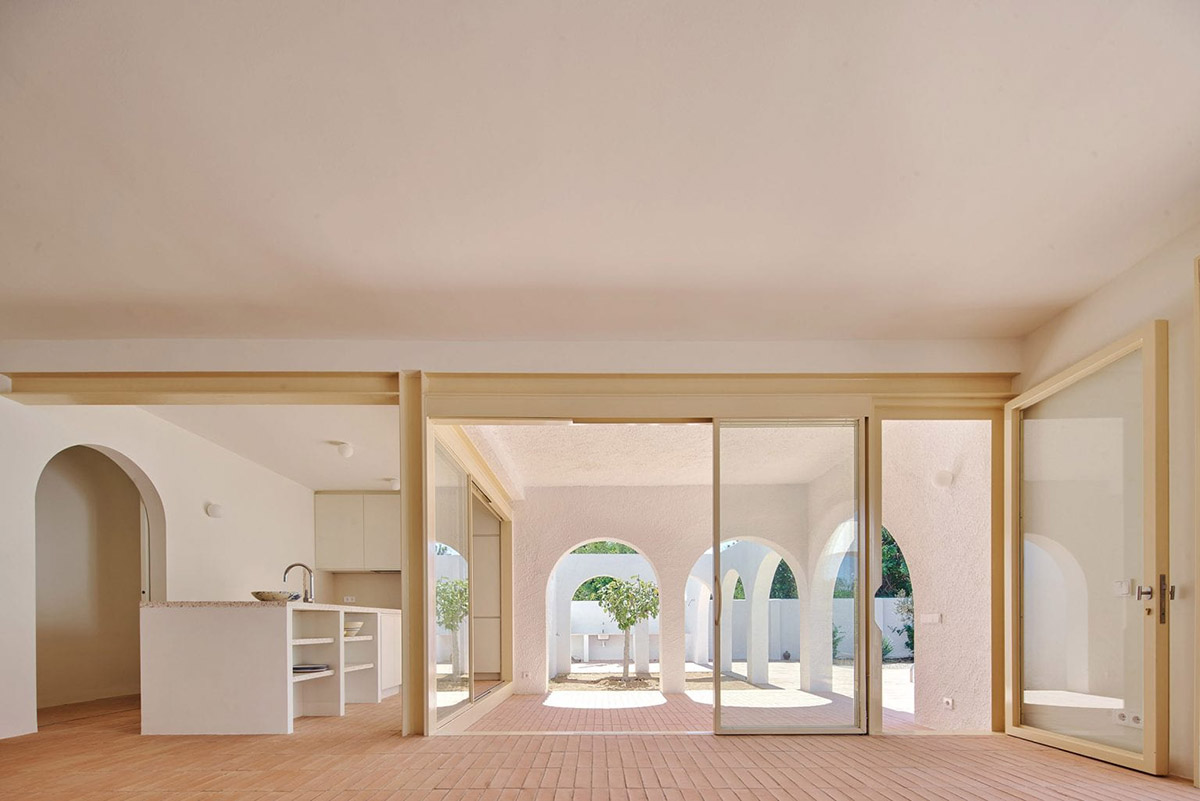 By considering the traditional layout of the house, the new home is opened more towards outside and the team used a steel structure with window frames— a large chamber that includes living, dining, kitchen, and loggia areas.

The pre-existing long corridor of the house has been blurred, but it has been widely connected with the living area, the corridor has, in both ends, generous pivoting doors, providing spatial continuity with large versatile rooms of indeterminate function. 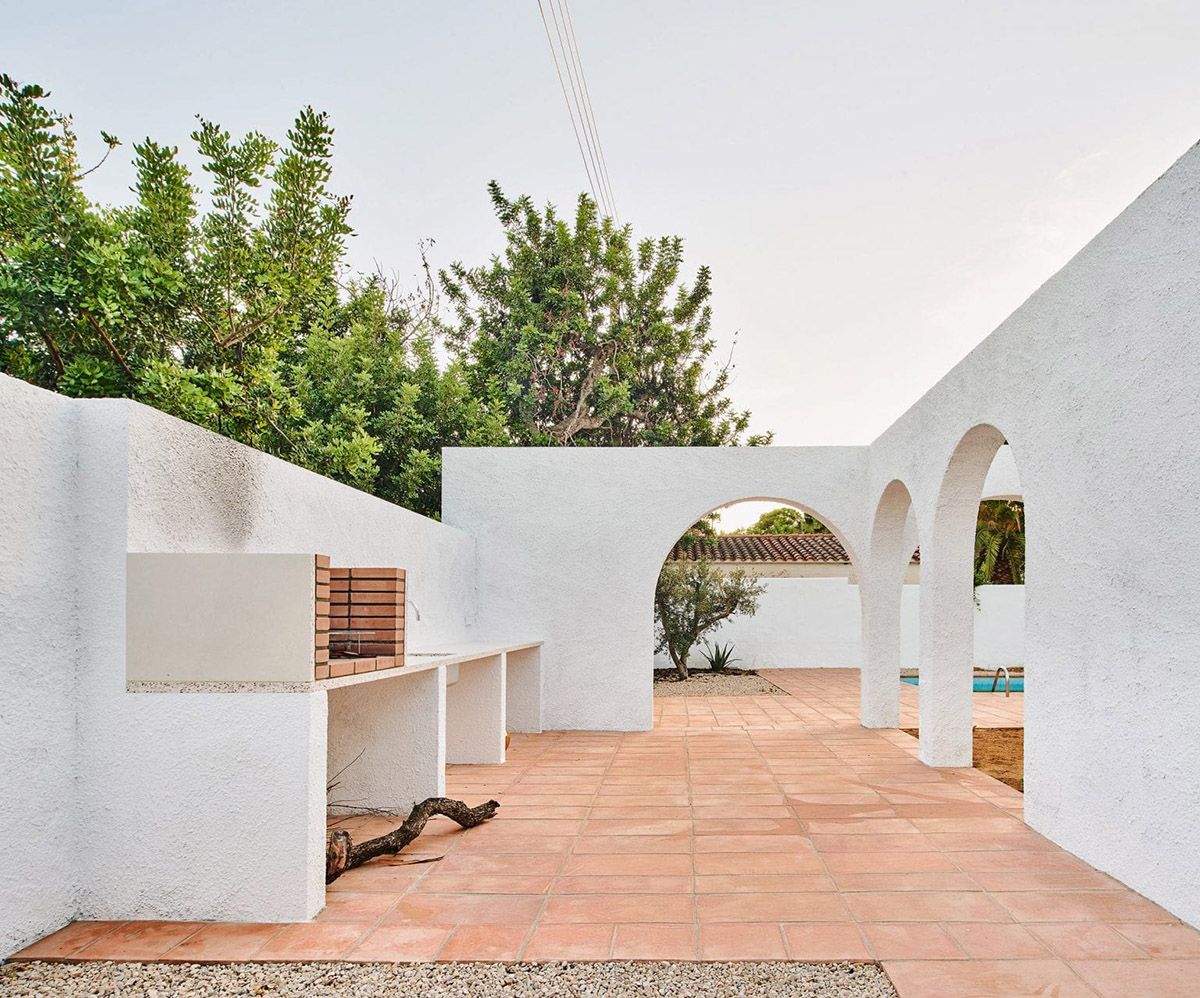 The architects created a good combination of materials: with the existing structure and steel thresholds. This combination is melted well together and creates a soft, sand-stone appearance. 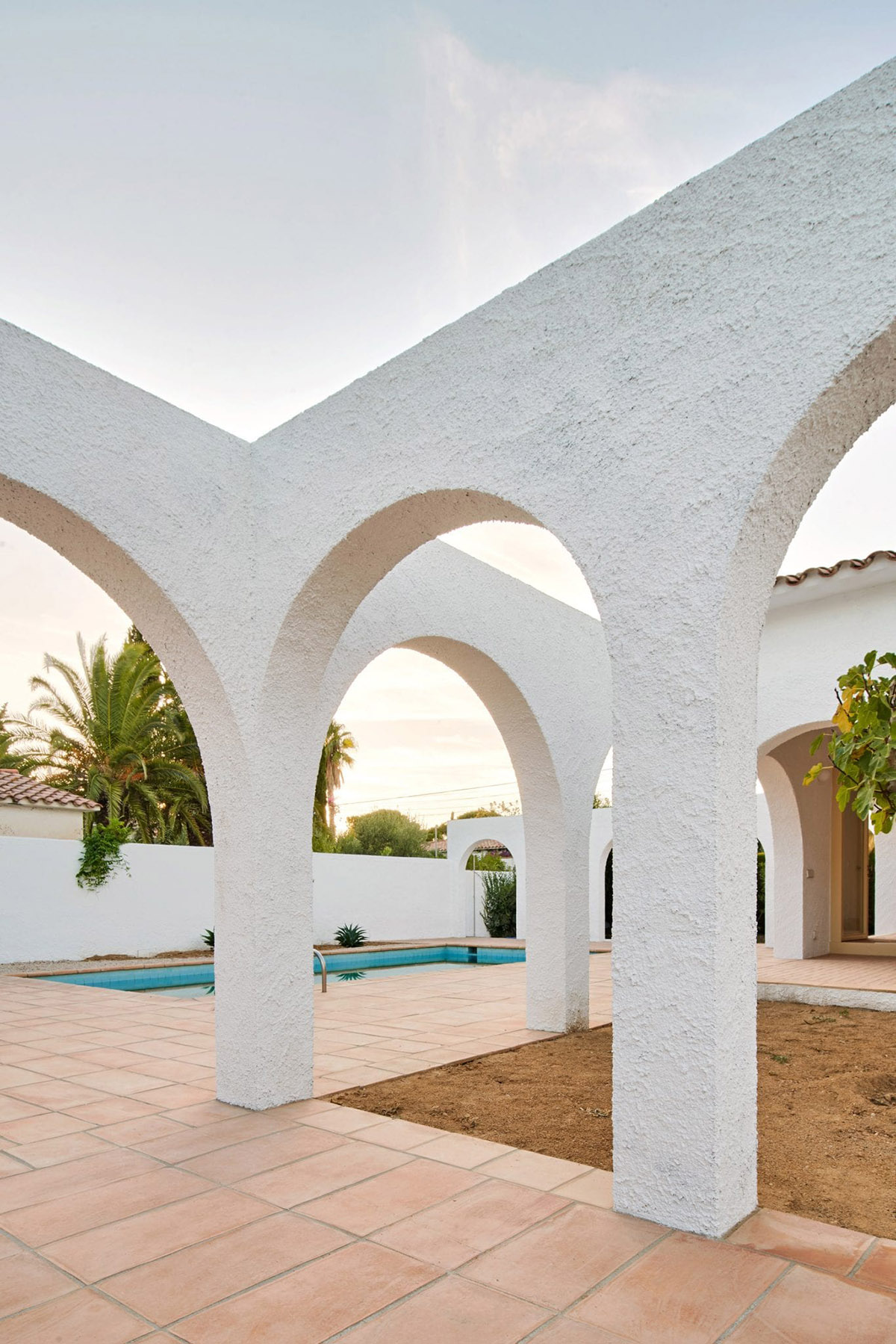 The façade openings are superimposed with different steel layers, meditating on the relationship between interior and exterior.

On the outside, a perforated sheet forms a sliding gate that makes it possible to sleep with the window open. Inside, rectangular folding window frames allow full exterior opening. The architects use different levels of mud topographies

"The manifold continuity of the whole has been emphasized by a beautiful hand-crafted tapestry of Valencian terracotta tiles," said the architects.

"This pavement unifies garden and house, interior and exterior on the same topography; while it suggests difference and hierarchy through its pattern, acknowledging rooms and edges; building walkways, shelves, benches, and wall claddings." 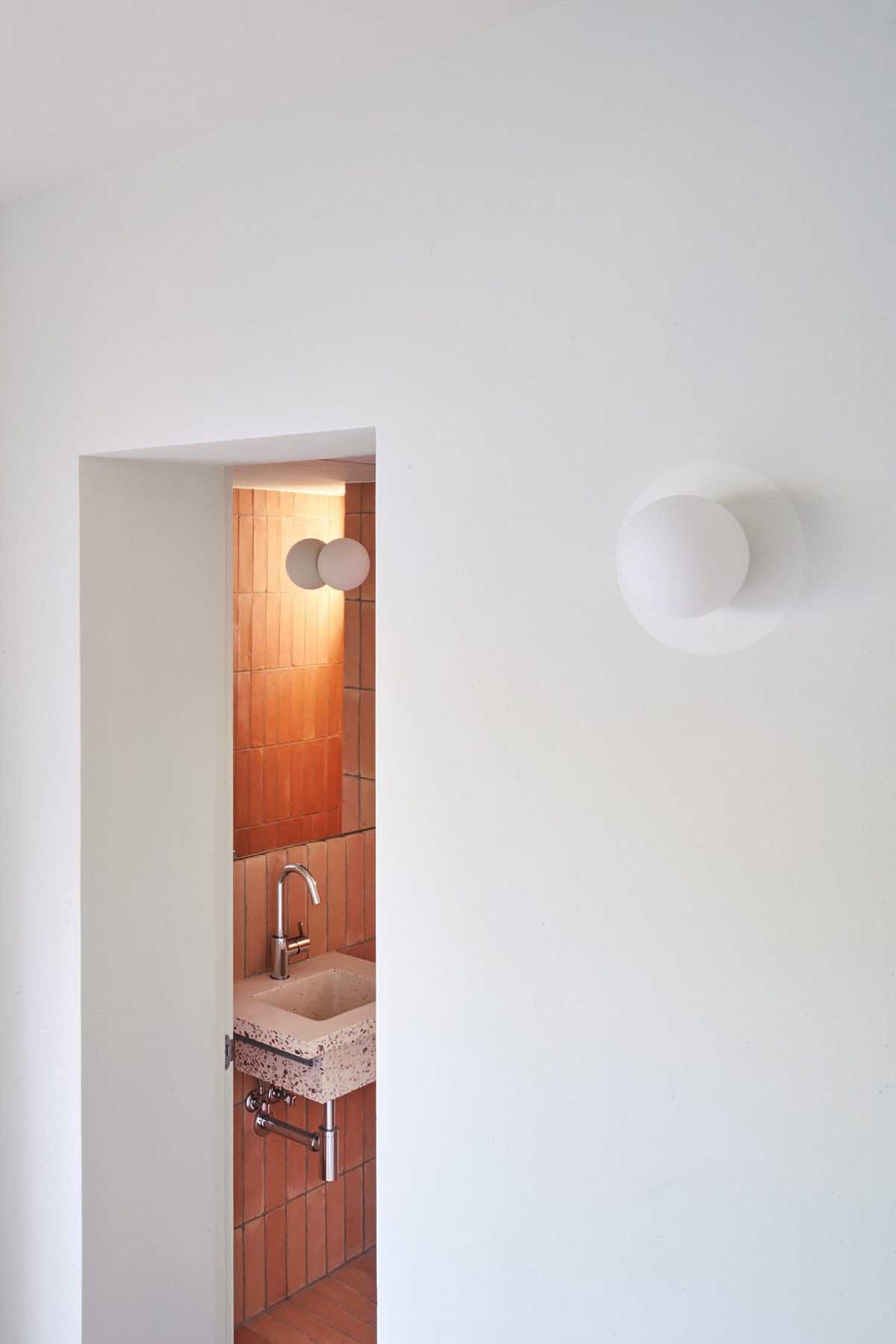 This summer house, without air conditioning, never gets too hot, as the team explain. Built by using ordinary construction methods, the existing pitched roof sits on top of a dense matrix of walls which provide a ventilated cavity while increasing greatly thermal inertia.

The thermal comfort of the home is improved with additional cross ventilation and sun protection.

In the garden, the architects reduced hard surfaces to increase greenery, aiming to improve atmospheric humidity and perceived ambient comfort. 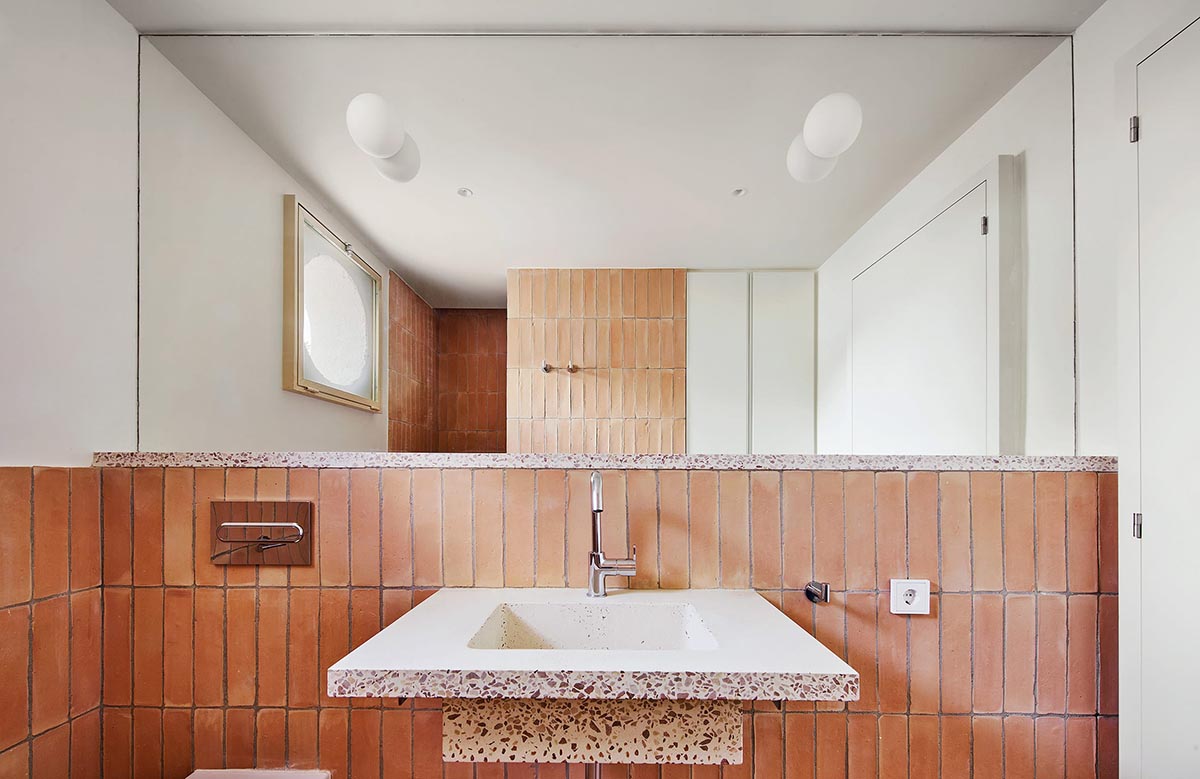 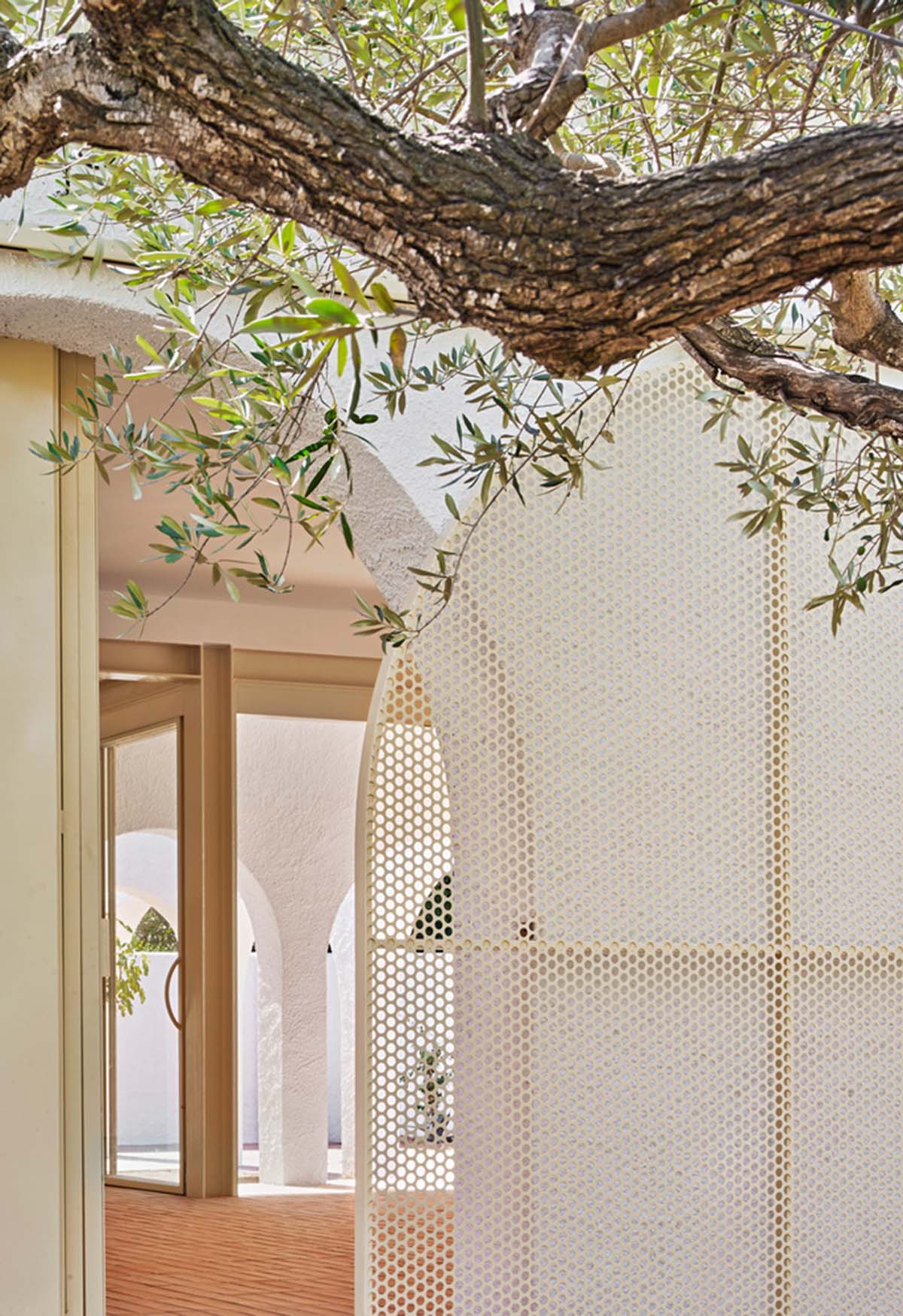 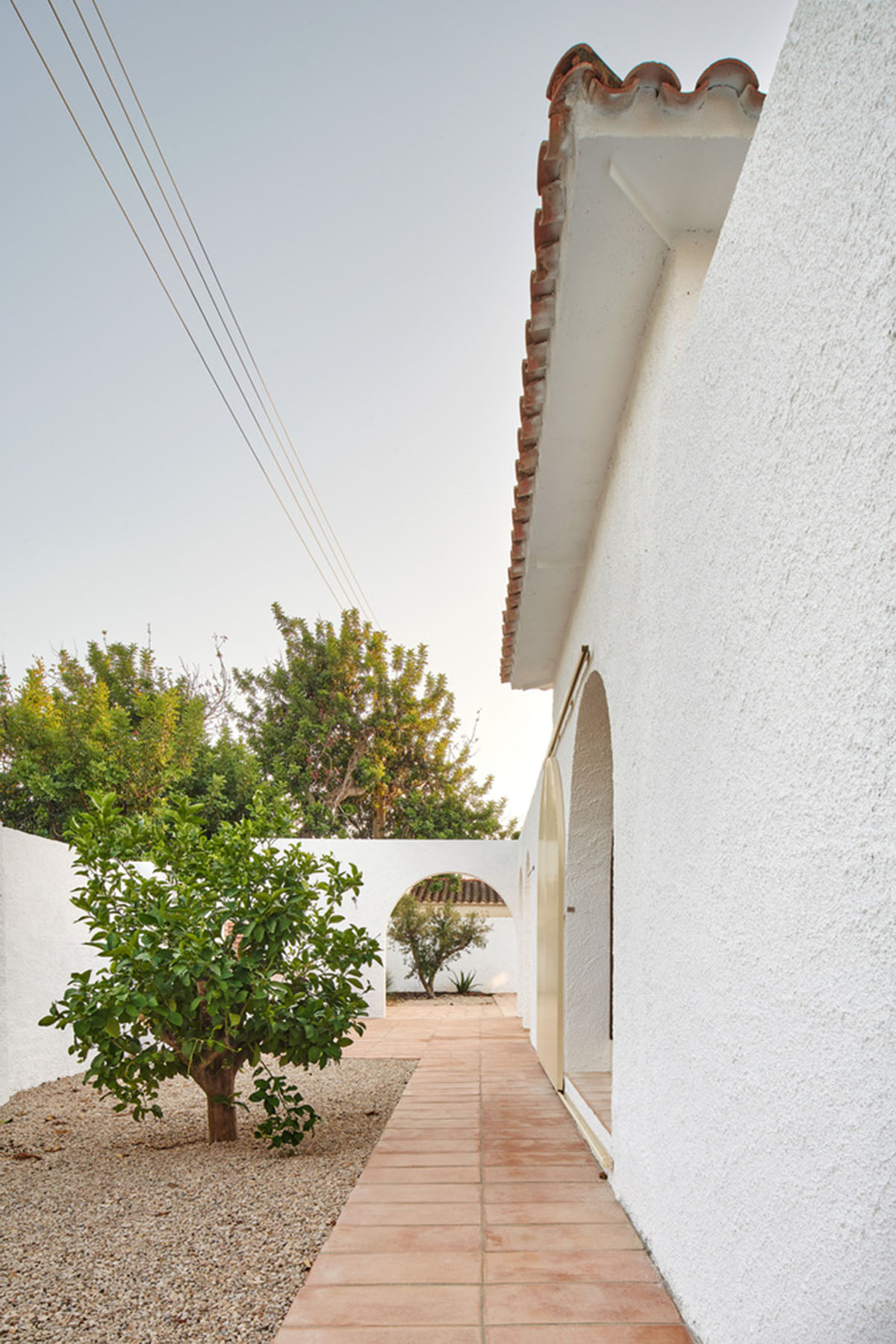 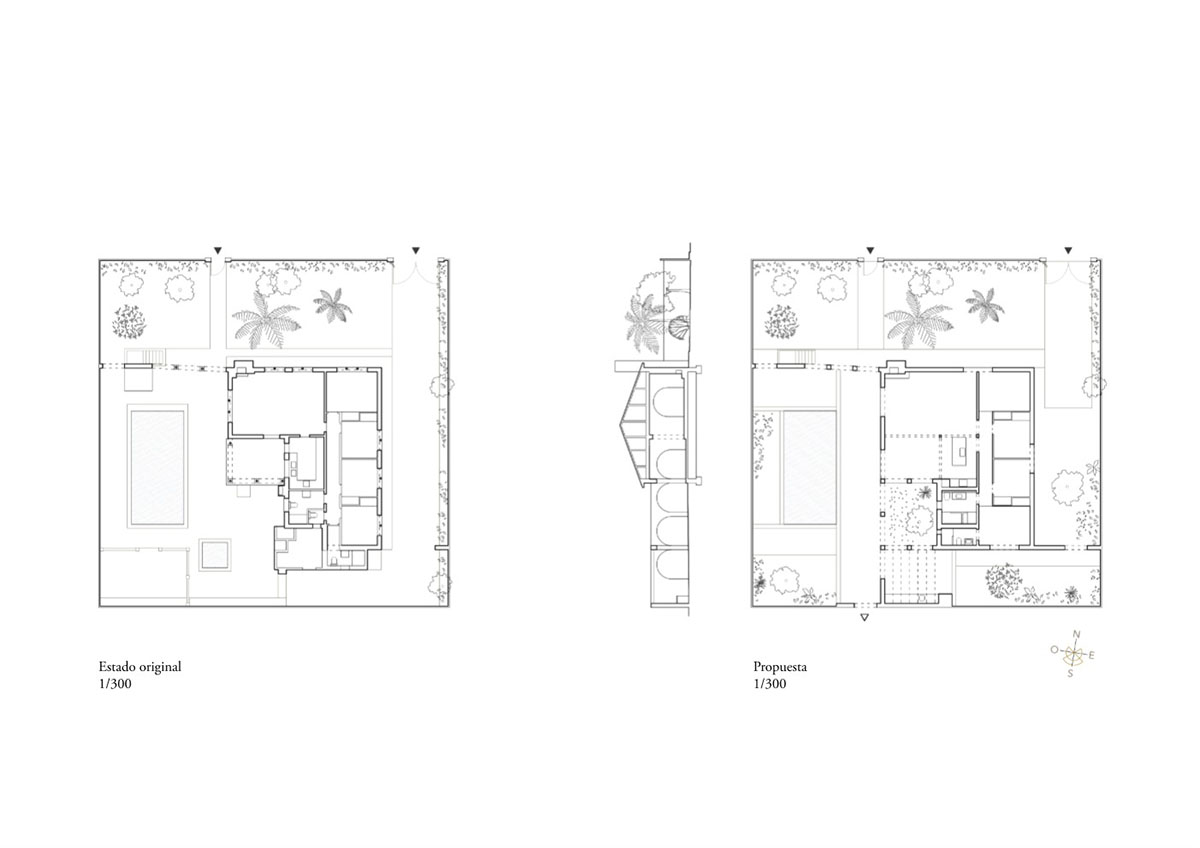 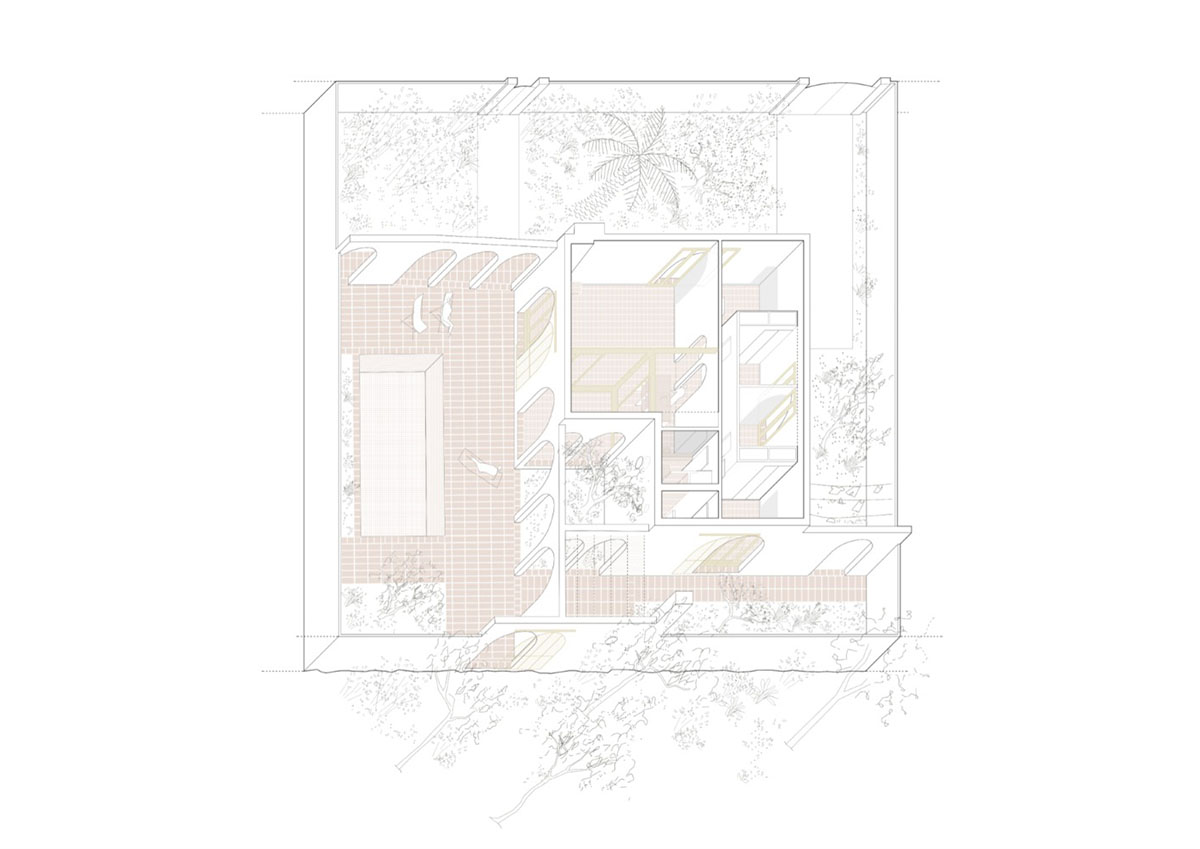