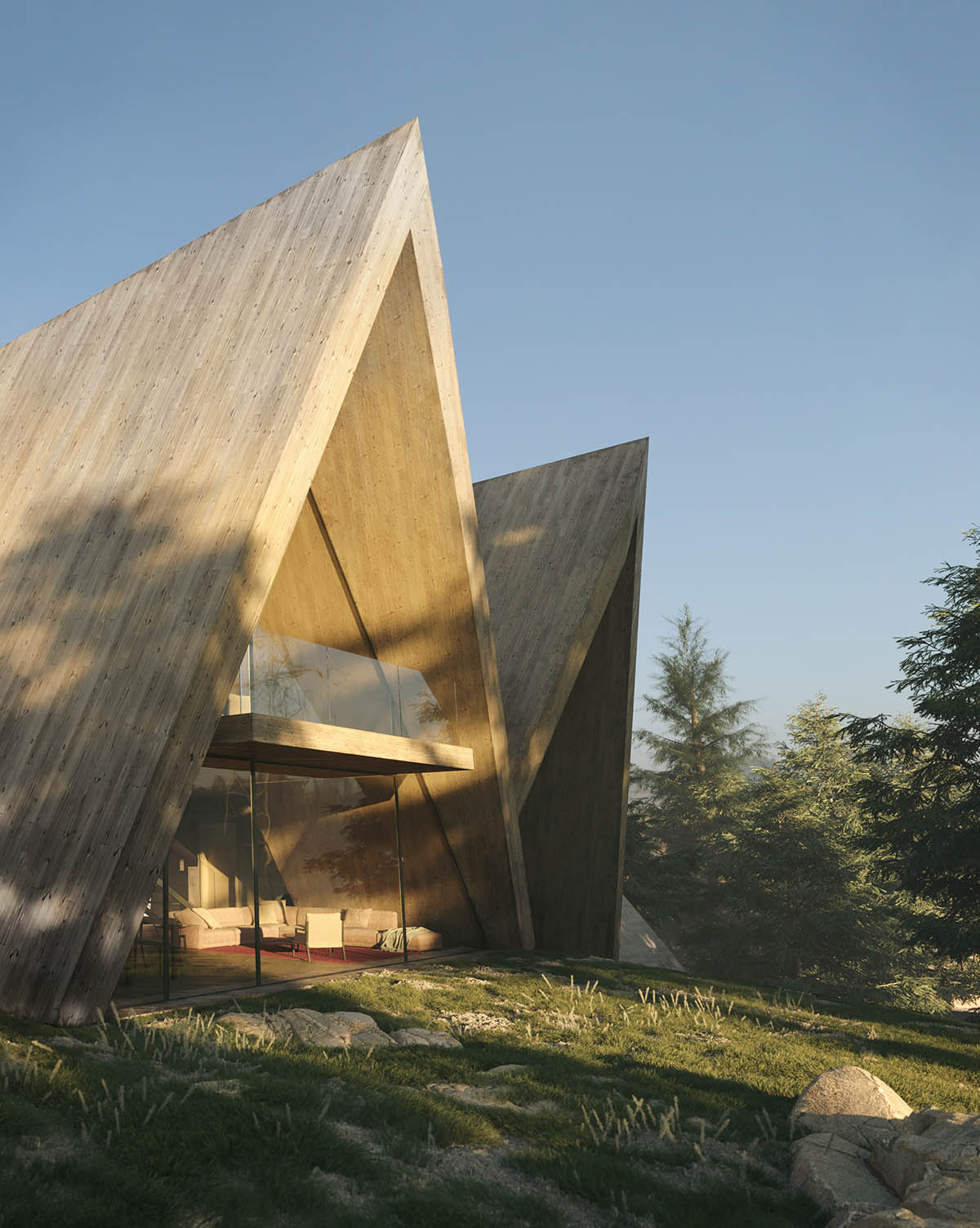 Called Colorado Villa, the 600-square-metre holiday home is located in the heart of the Rocky Mountains, amidst one of Colorado's most unspoilt landscapes.

The villa is proposed for a private client client couple for their children and grandchildren, connecting them with nature and meet their demands in a playful organization. 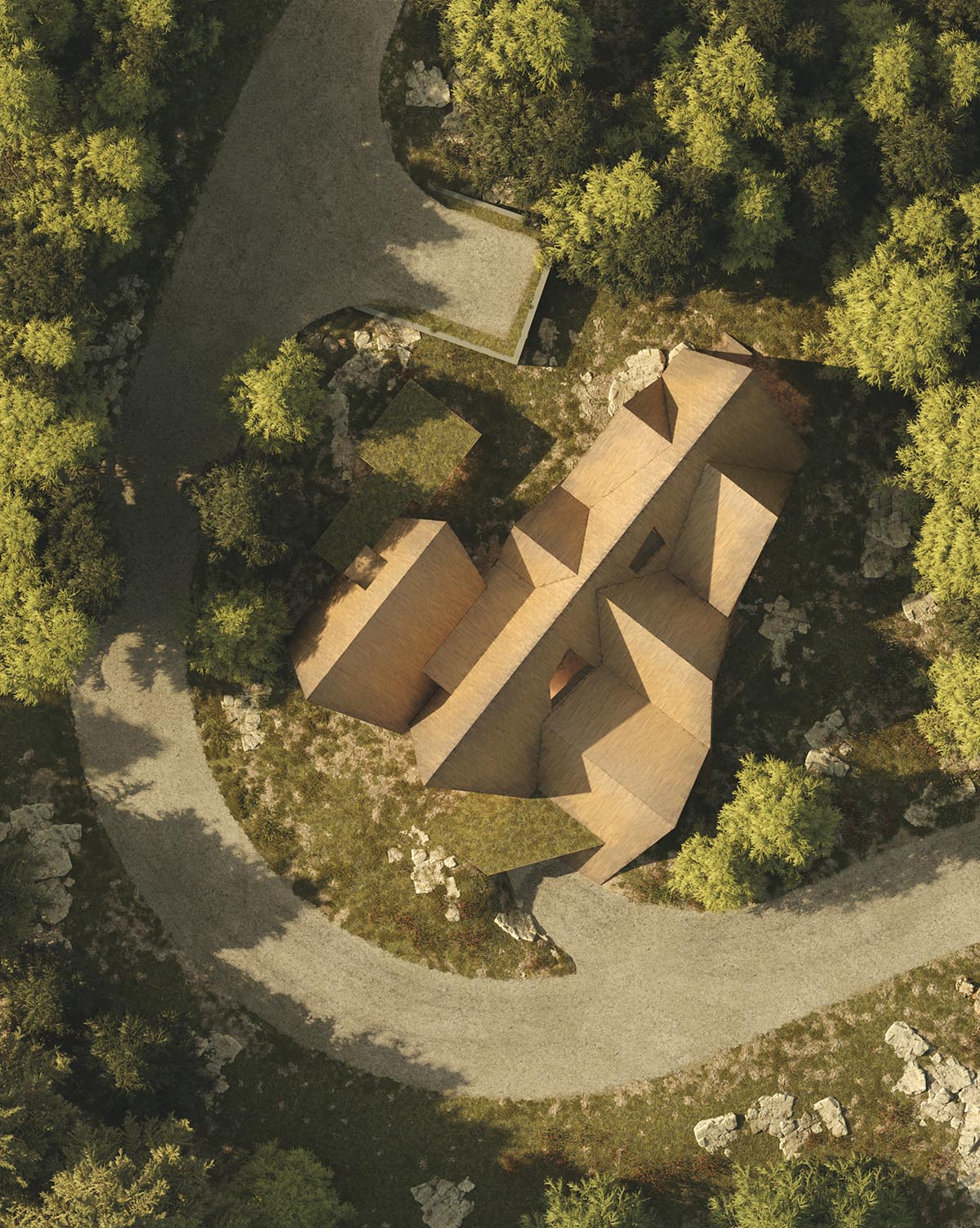 The site is surrounded by the snow-capped peaks of the Rocky Mountains and extensive pine forests, and according to the studio, it is common to come across the archetypal American holiday home, the so-called 'A-Frame'.

"This typology, which has become a symbol of weekend getaways from the city, features steeply pitched roofs that replace the walls entirely and provide ideal weather protection in snowy regions," said noa*.

The studio takes a personal interpretation of the distinctive clean geometry of the A-frame and creates a cosy refuge where one can come together as a family and reconnect with nature. 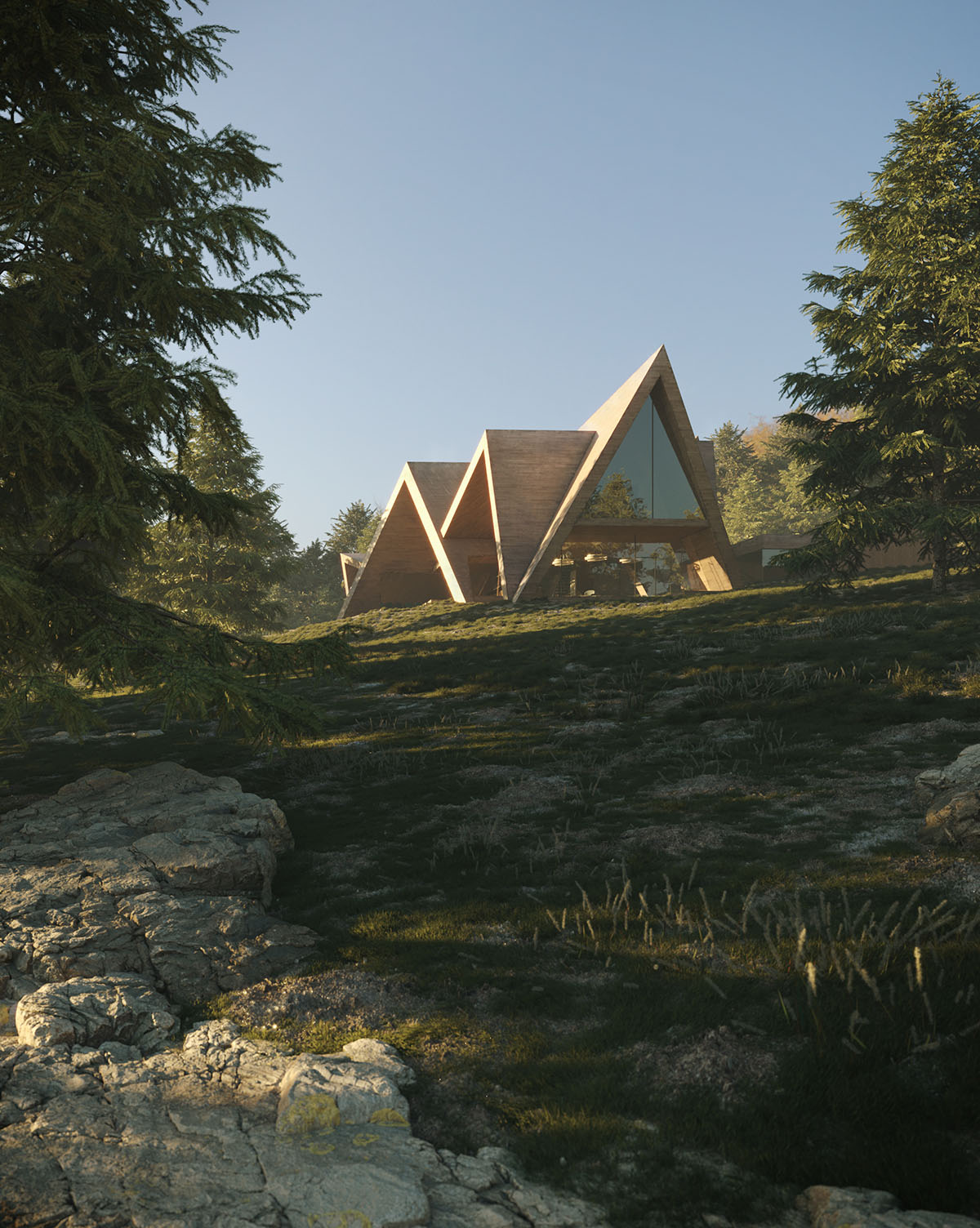 The team interconnected A-frame volumes to create a singular visual geometry that the house's functional programme can be used for the needs of three different generations.

The interior layout combines common areas with independent privacy zones for each of the families.

In a perfect convergence between the client's needs and architecture, the team of designers decided to adopt the typology of the triangular house in a more complex interplay of volumes, creating a multifaceted spatiality with an increasing level of privacy on the higher floors

"We have implemented the clear geometry and outward openness typical of the A-frame, but at the same time, we have accommodated smaller, unexpected, but still very comfortable spaces within the larger volume," said Andreas Profanter, noa* partner and project leader.

"It's a space concept similar to a matryoshka system," Profanter added. 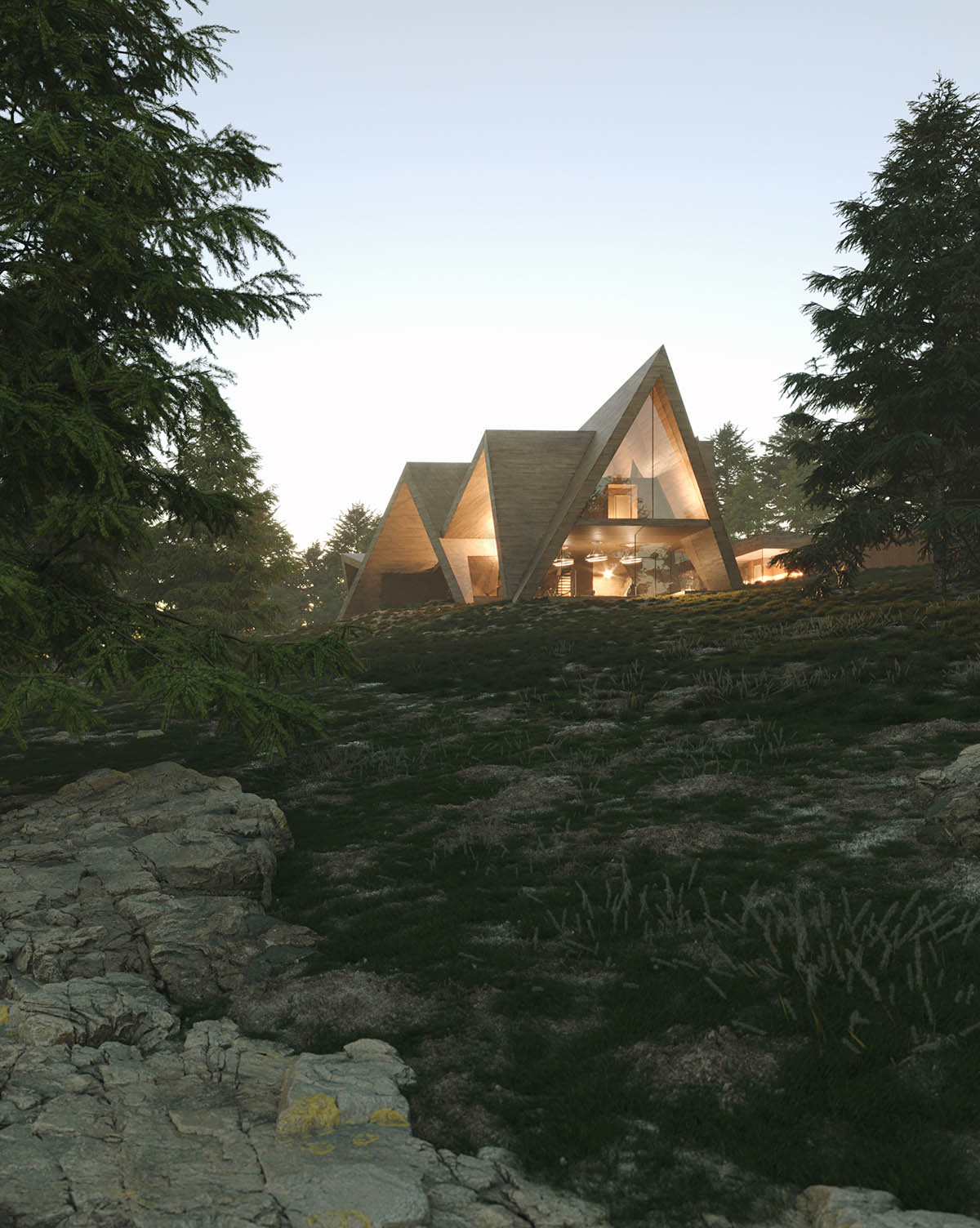 The result is a 30-metre-long triangular prism intersected at several points by volumes of the same geometry. The architecture, which in its articulated structure is perceived as a body.

The entrance door on the east side of the house leads to a first stairwell. From here, one can access three areas: the basement with parking spaces and cellar rooms, the client couple's private villa, and the family villa with a large communal living area.

The ground floor of the private villa accommodates a living room, a freestanding stairway, a kitchen with a cooking island and two offices overlooking the inner courtyard, where the barbecue area is set.

The heart of the family villa is the large fireplace on the ground floor, which serves as a focal point between the spacious kitchen to the east and the generous living room to the west.

The representative dining room with double room height adjoins the kitchen to the north. The relationship with the surrounding landscape is constantly being pursued: large glass façades on all house fronts provide ever-changing perspectives. The boundaries between outside and inside are blurred throughout the building, as in the living area, where part of the rock is integrated into the space.

On the upper floor of the villa, there are five bedrooms aligned with the roof's ridges. The rooms have an open plan design, and the conventional division of space into sleeping area and bathroom has been fluidly reimagined, with freestanding washbasins and bathtubs. 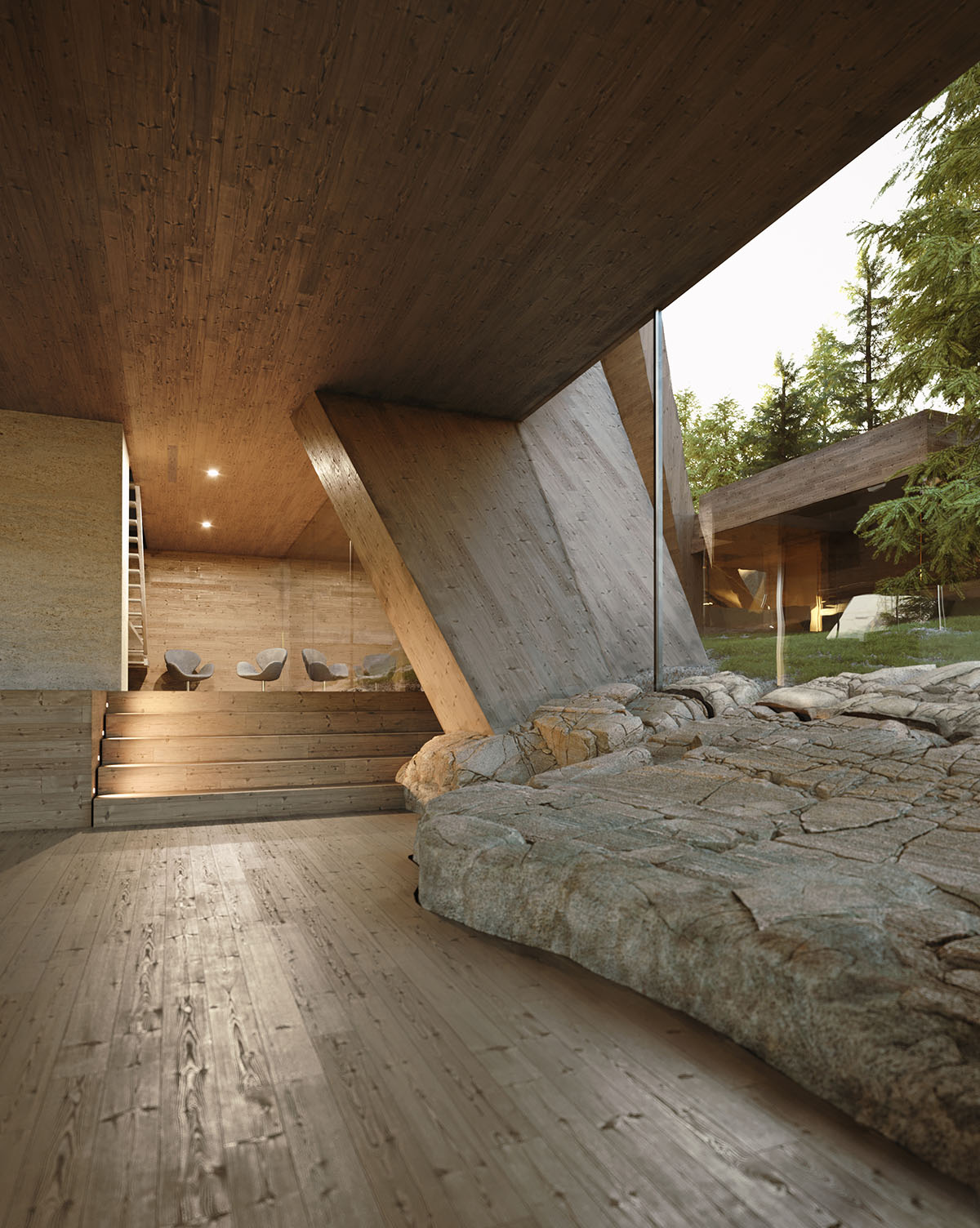 To allow the little ones to carve out a space for themselves, play areas have been created on the attic floor. These are directly accessible from the parents’ rooms.

"In agreement with the clients, we designed each room with maximum autonomy and comfort. Fluid spaces, double heights, and a few surprise elements. Like, for example, the children's playrooms, that can be reached via stairs hidden in the parents' rooms", concluded architect Andrea Dal Negro, who was part of the villa’s design team.

Once again, the architecture and interiors of the South Tyrolean design studio convey the expressive power and refined relationship with nature common to all noa* projects.

It is a project where intimacy and togetherness meet and where one can find itself in a unique symbiosis with the surrounding landscape. 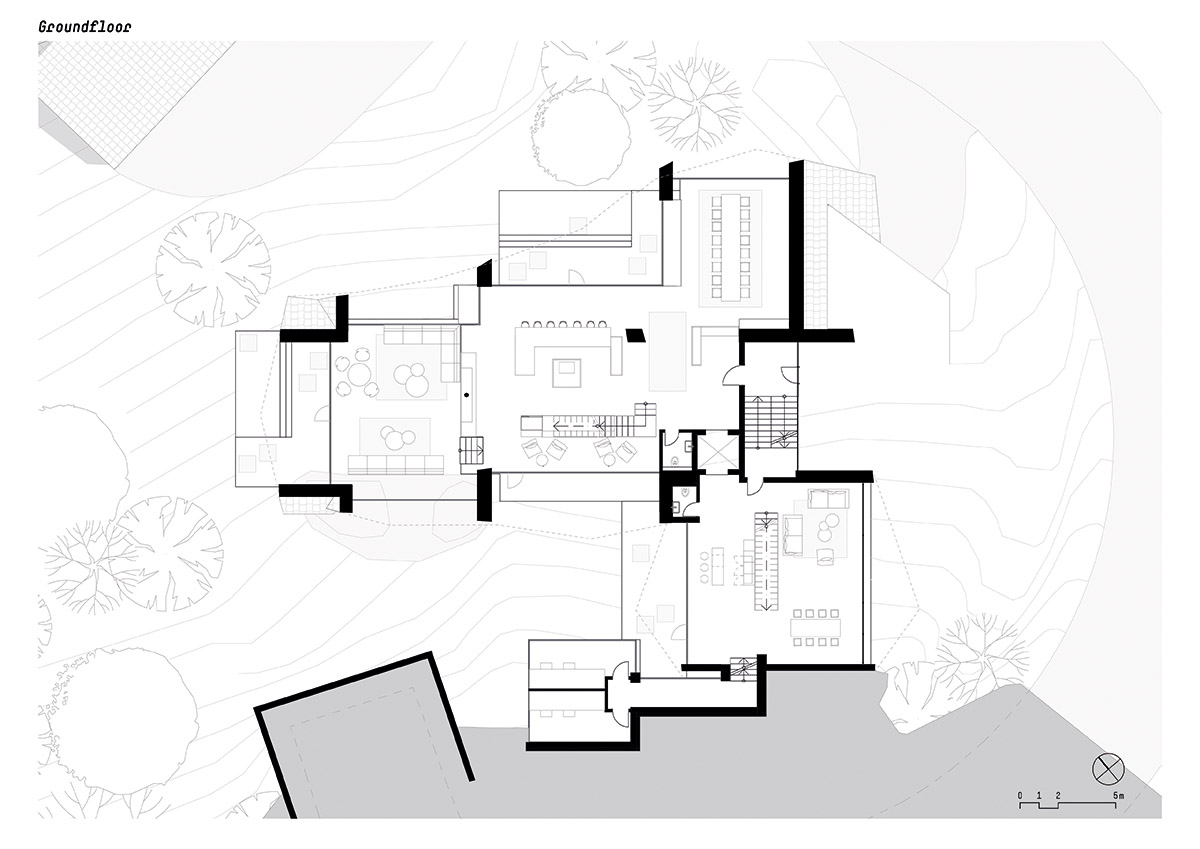 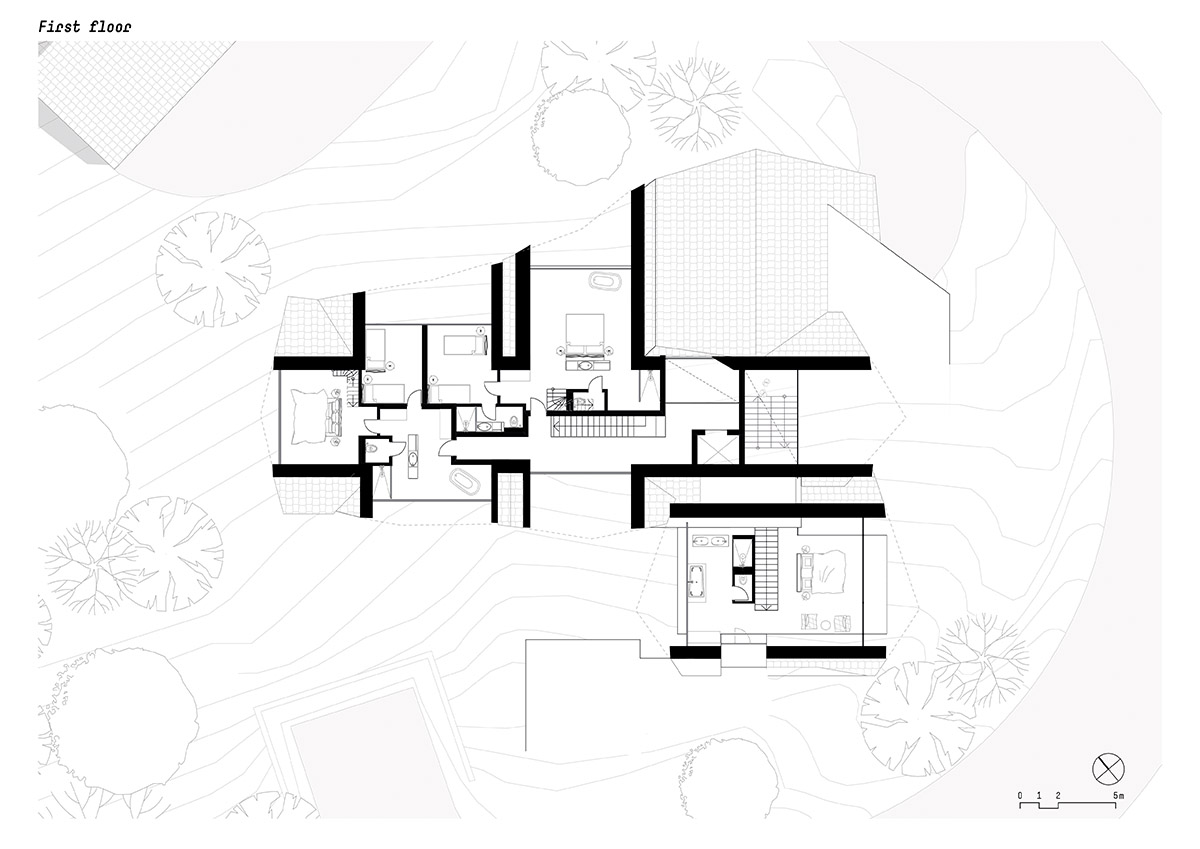 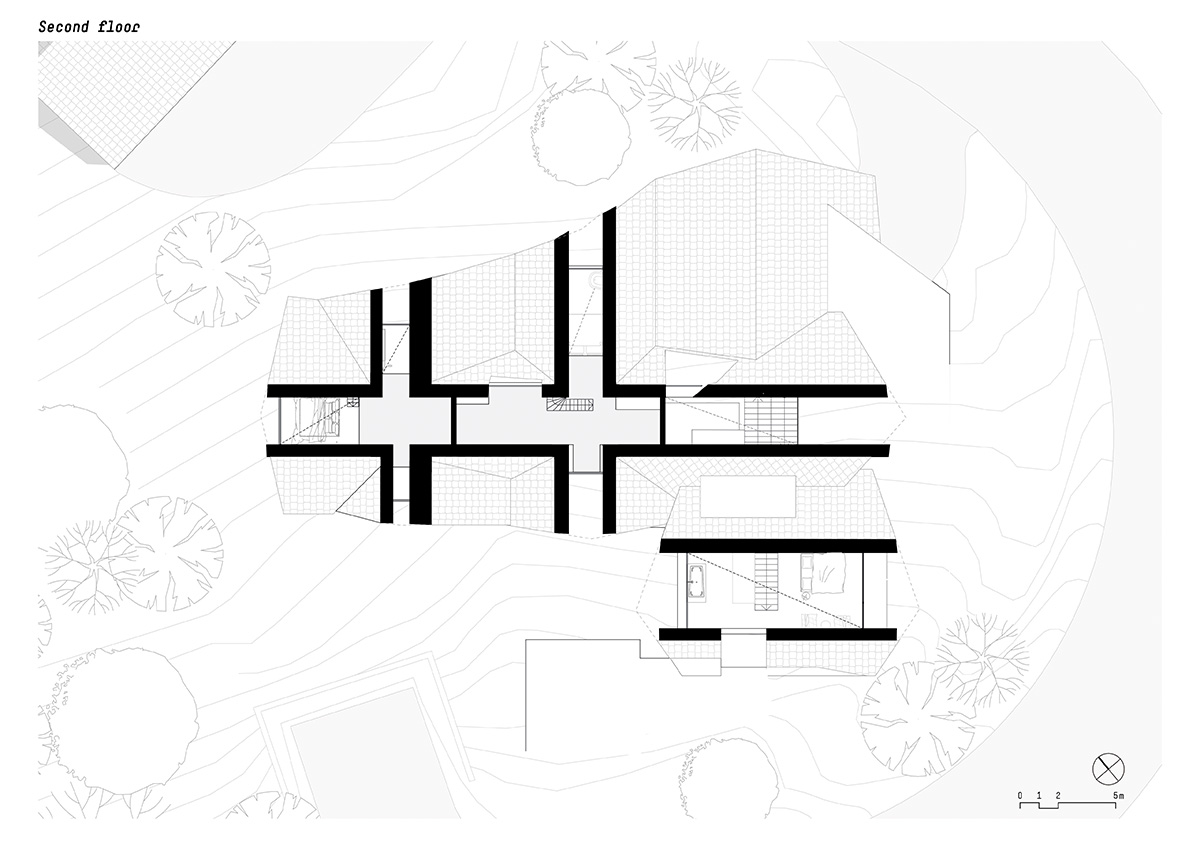 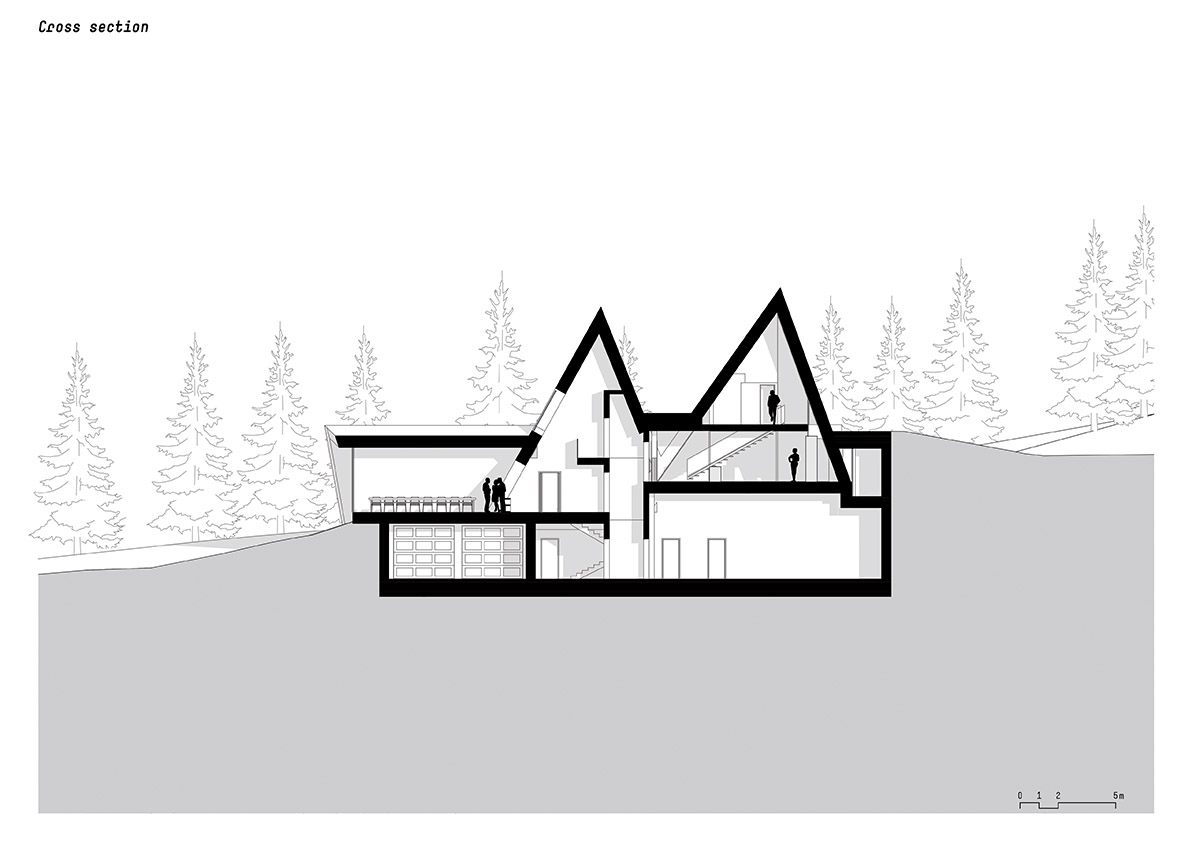 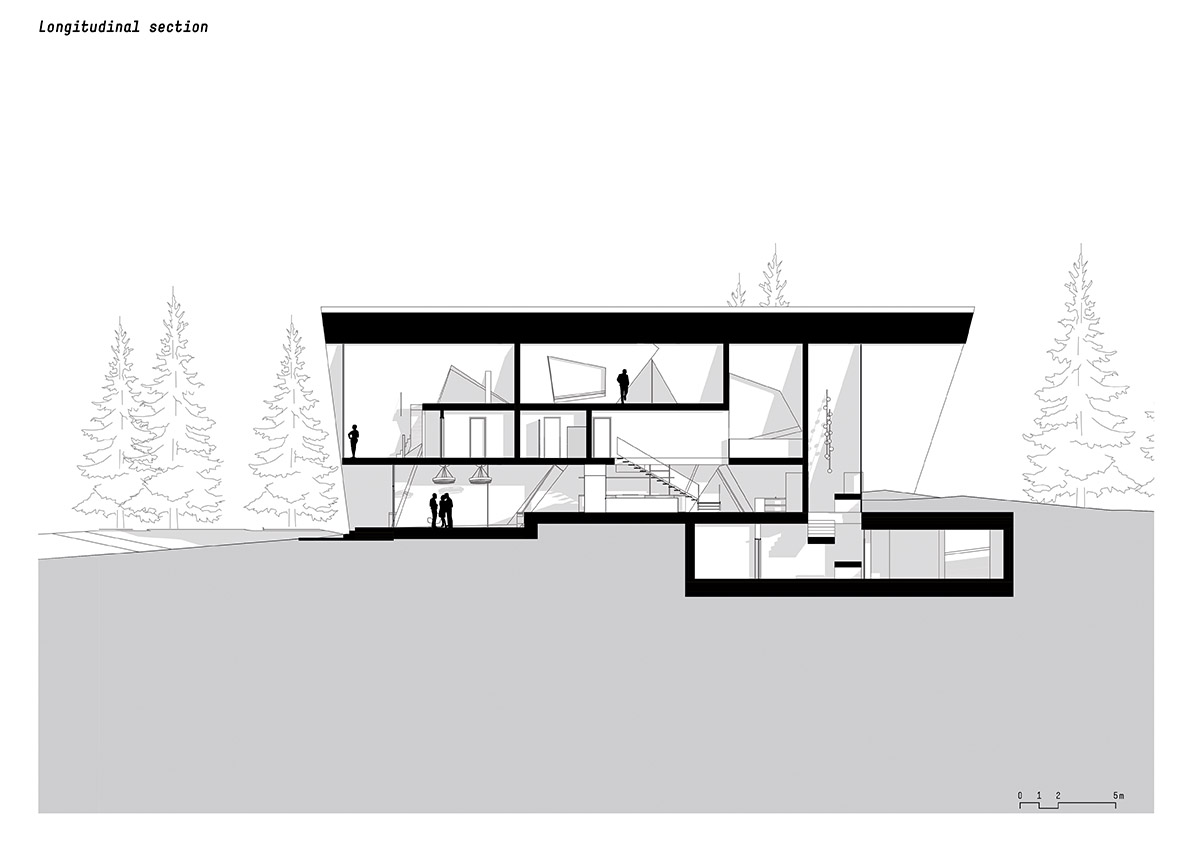 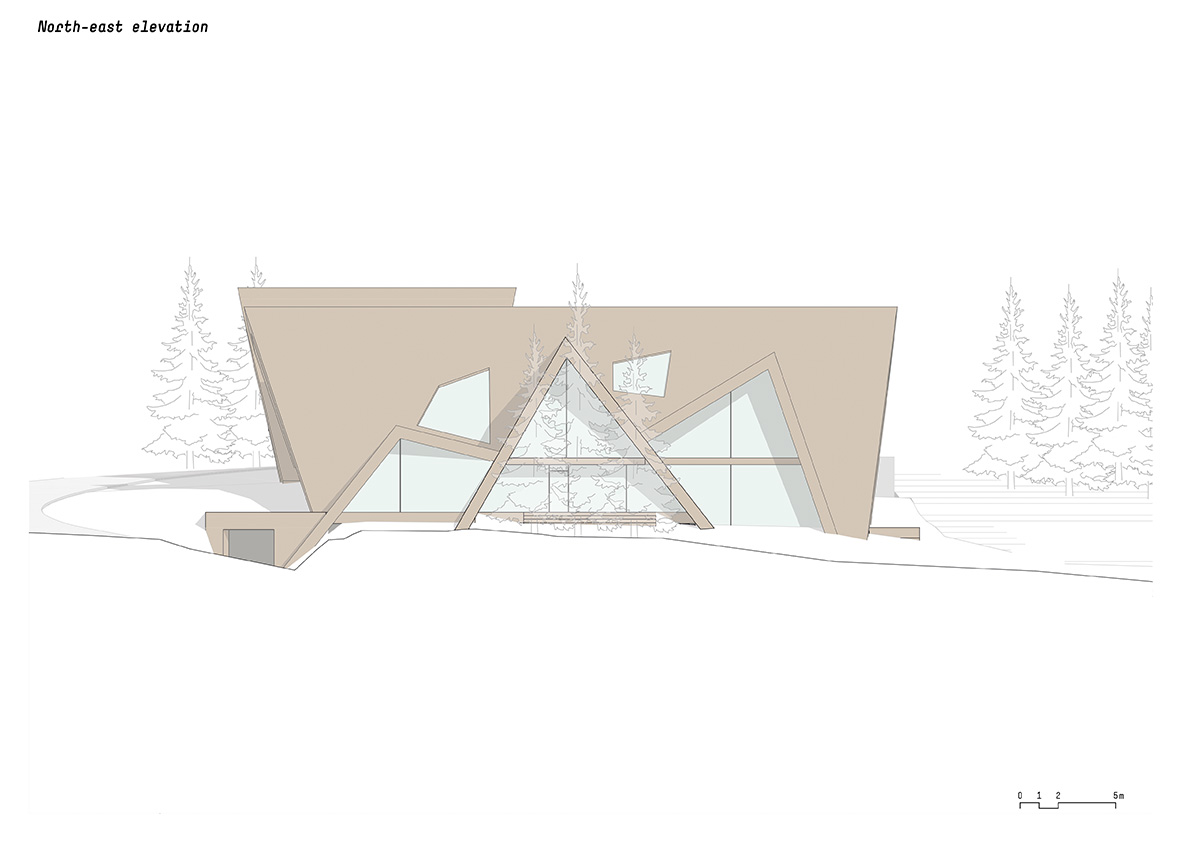 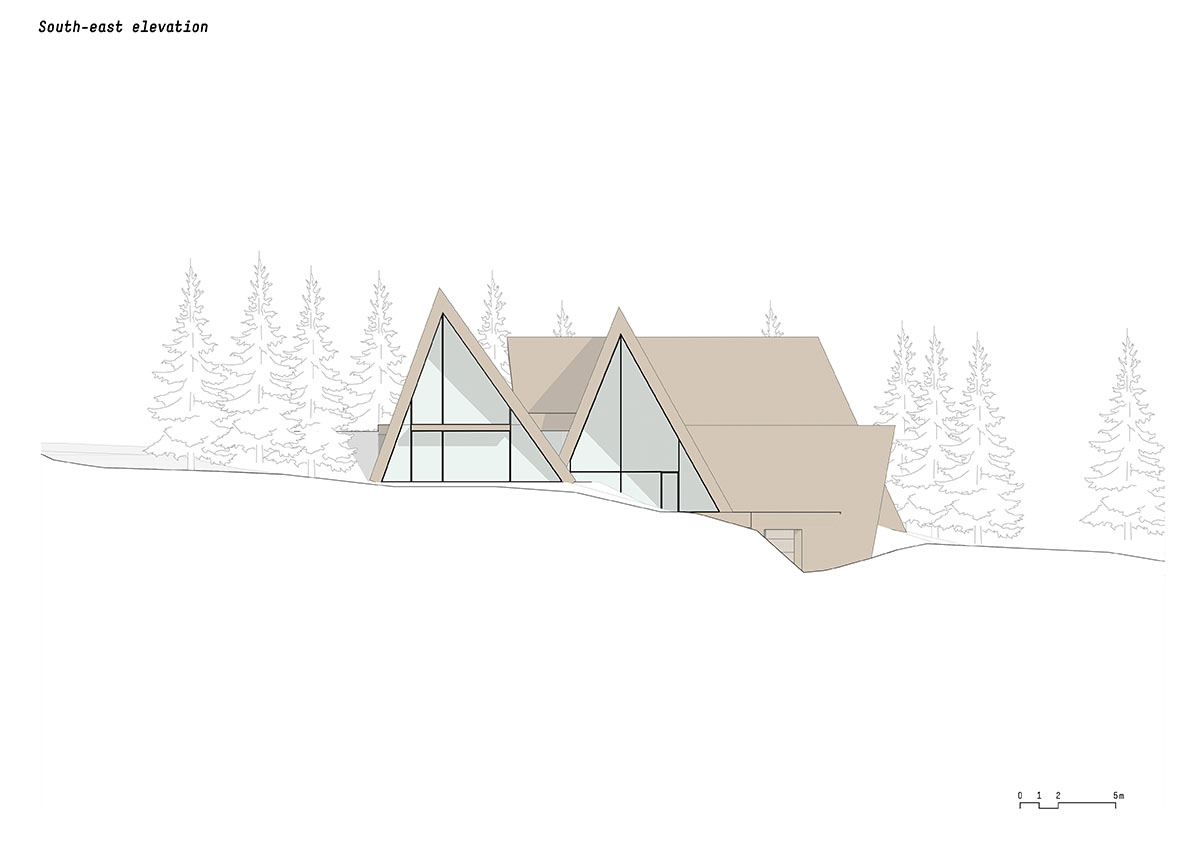 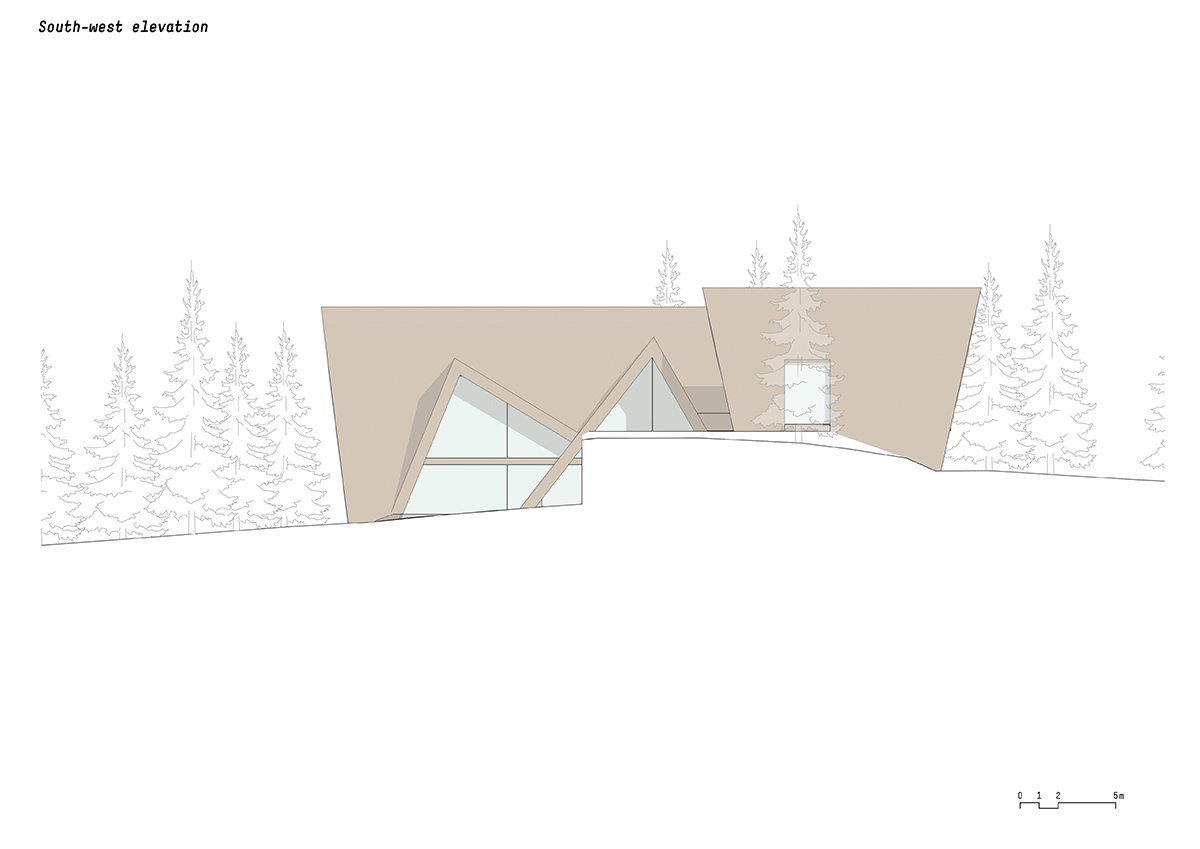 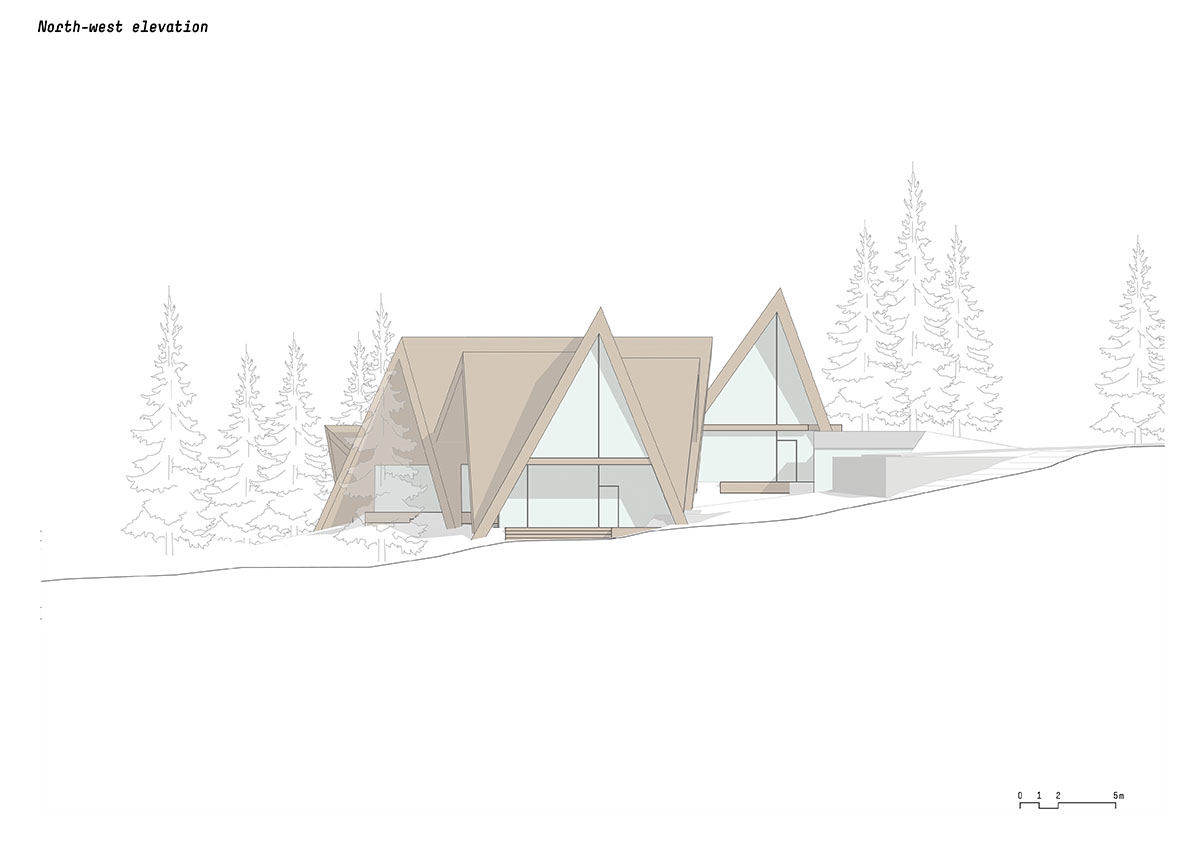 noa* recently completed the transformation of a 19th-century workshop house into a bohemian-style bistro with deep alcoves in Bolzano, Italy.

The studio also converted a 18th century hotel building into an apartment in Paris.

All drawings © noa* network of architecture.