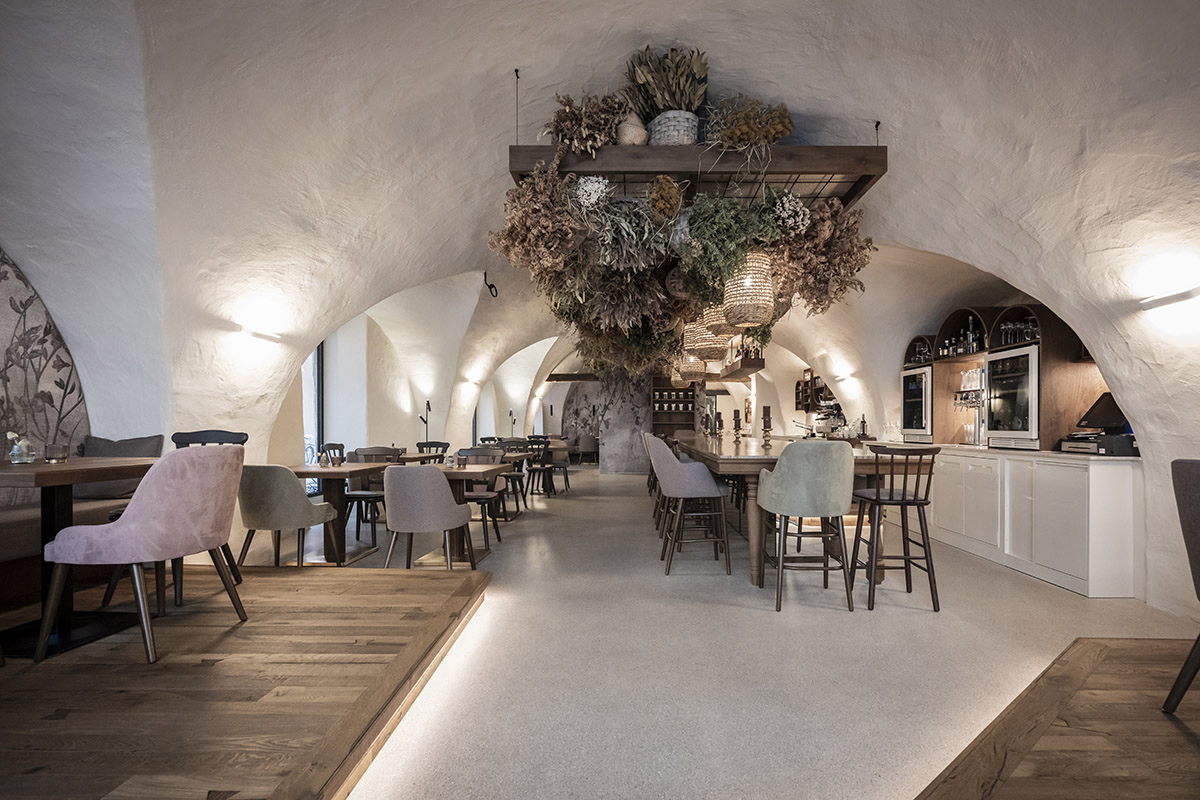 Bolzano and Berlin-based architecture studio noa* network of architecture has transformed a 19th-century workshop house into a bohemian-style bistro with deep alcoves in Bolzano, Italy.

The 188-square-metre project, named Bogen, was converted from an ancient barrel-vaulted workshop that is hidden under the dust of history along one of the oldest trade streets of Bolzano.

With this renovation, noa* has revitalized the space by transforming it into a welcoming bistro poised between historical heritage and contemporary finesse. 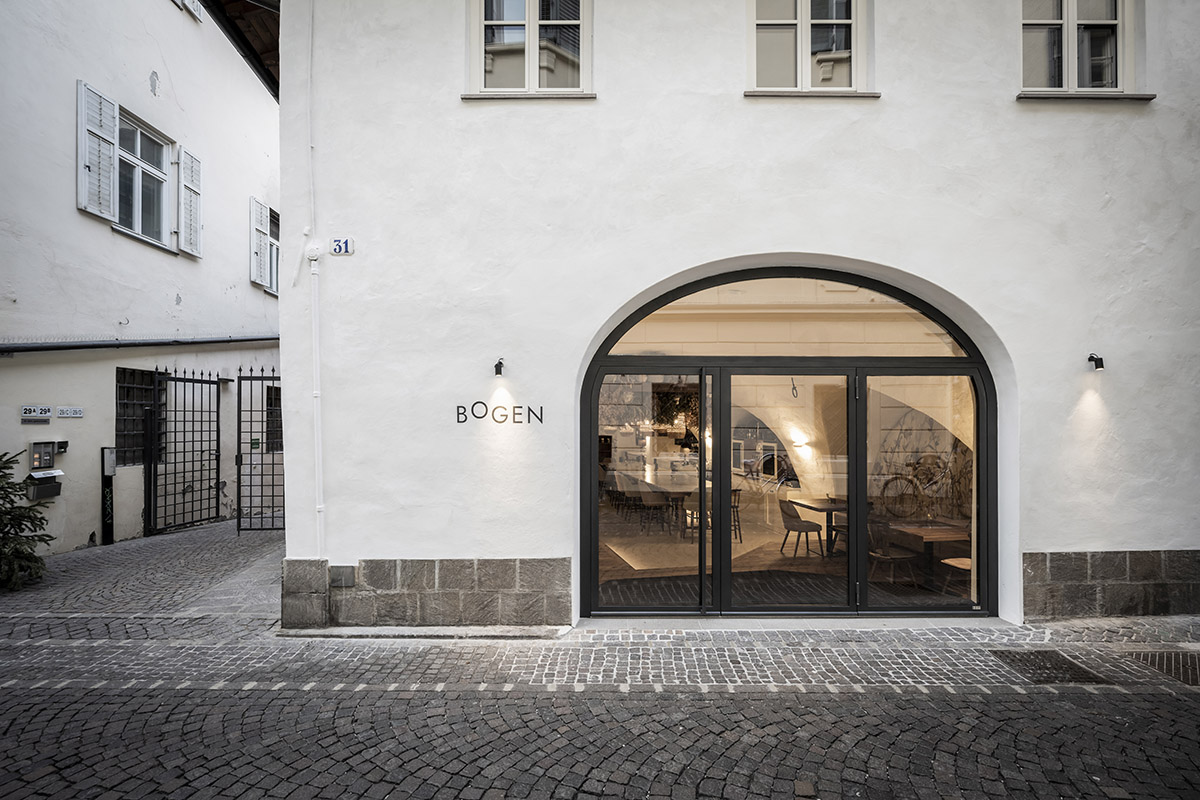 Renovated for the Mayr family, the studio redesigned the space which is located on the ground floor where shoemakers, carpenters, carters, wood and fruit merchants worked in the 19th century.

The house was later used as the first restaurant on the street was established. 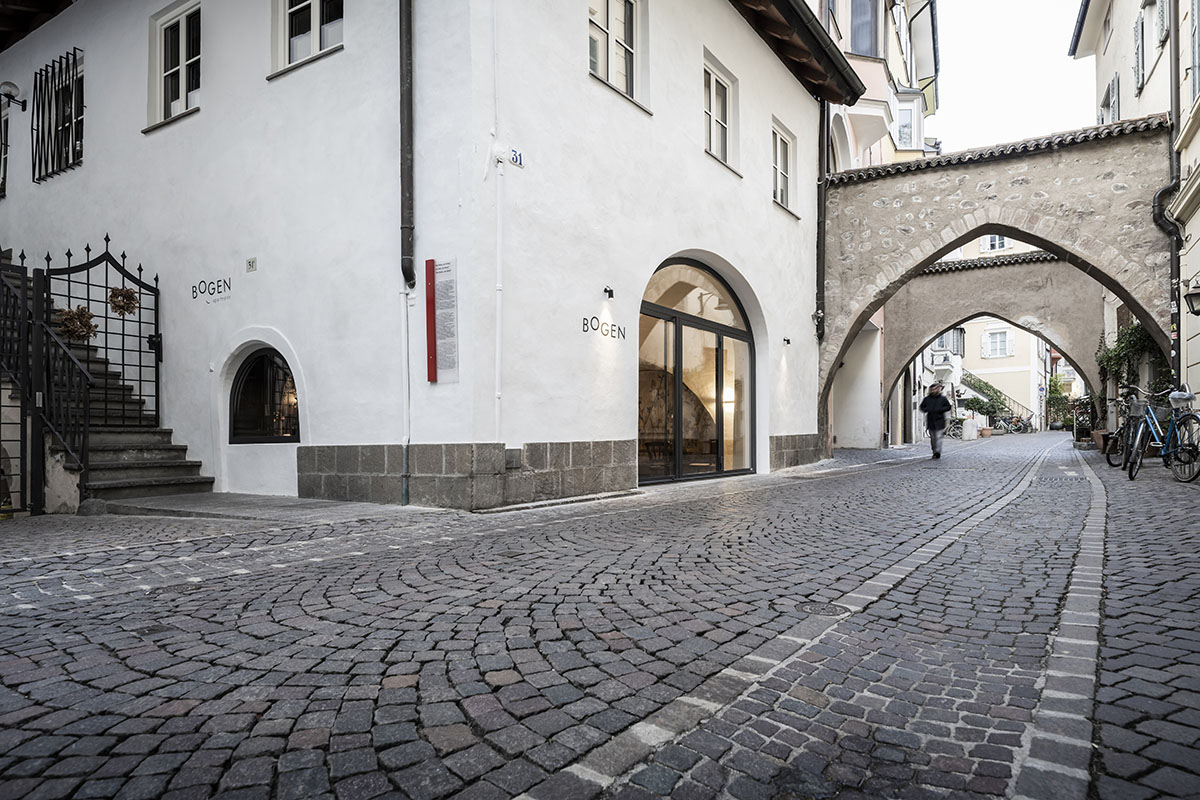 The Mayr family are the current owners of the building, who entrusted noa* to restore and design interiors for a new destination: the Bogen bistro. 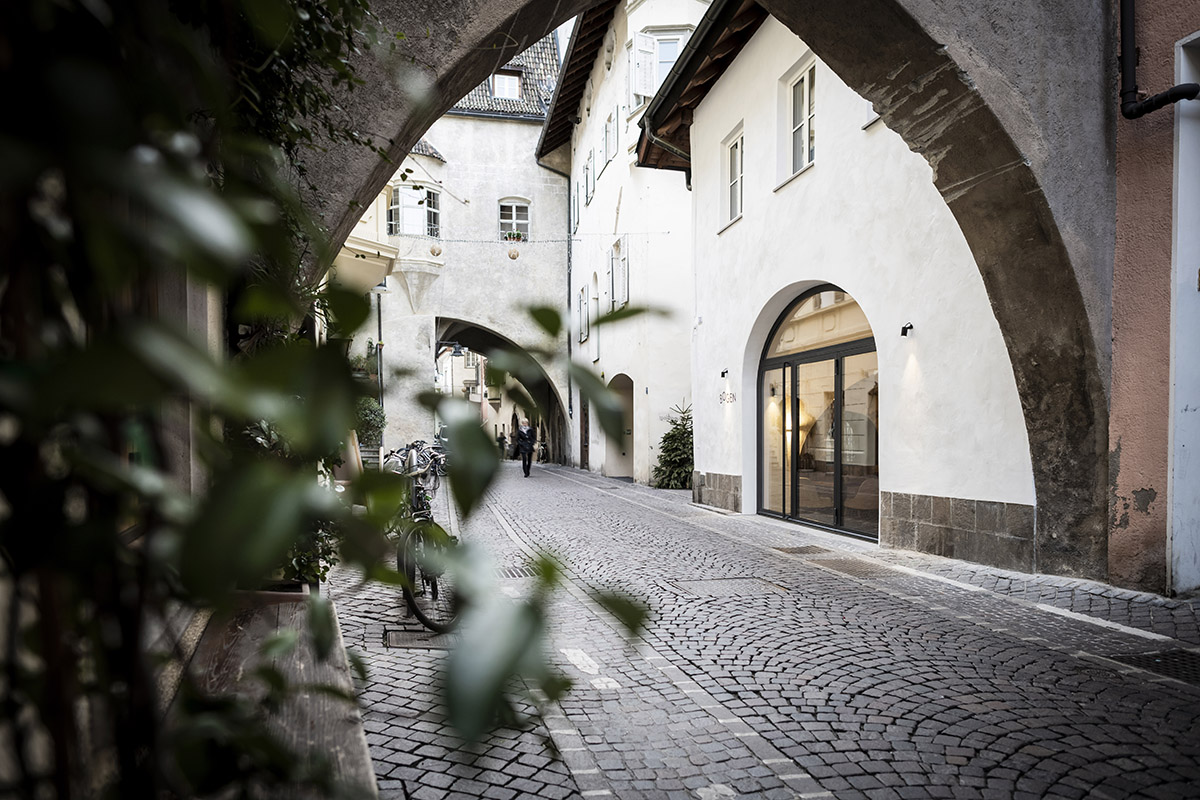 The interiorsare derived from the structural vaults of the former house and their identity is reflect into the new space where visitors can enjoy their food and drink under the deep alcoves.

According to the architects, the space should reflect a bohemian style. 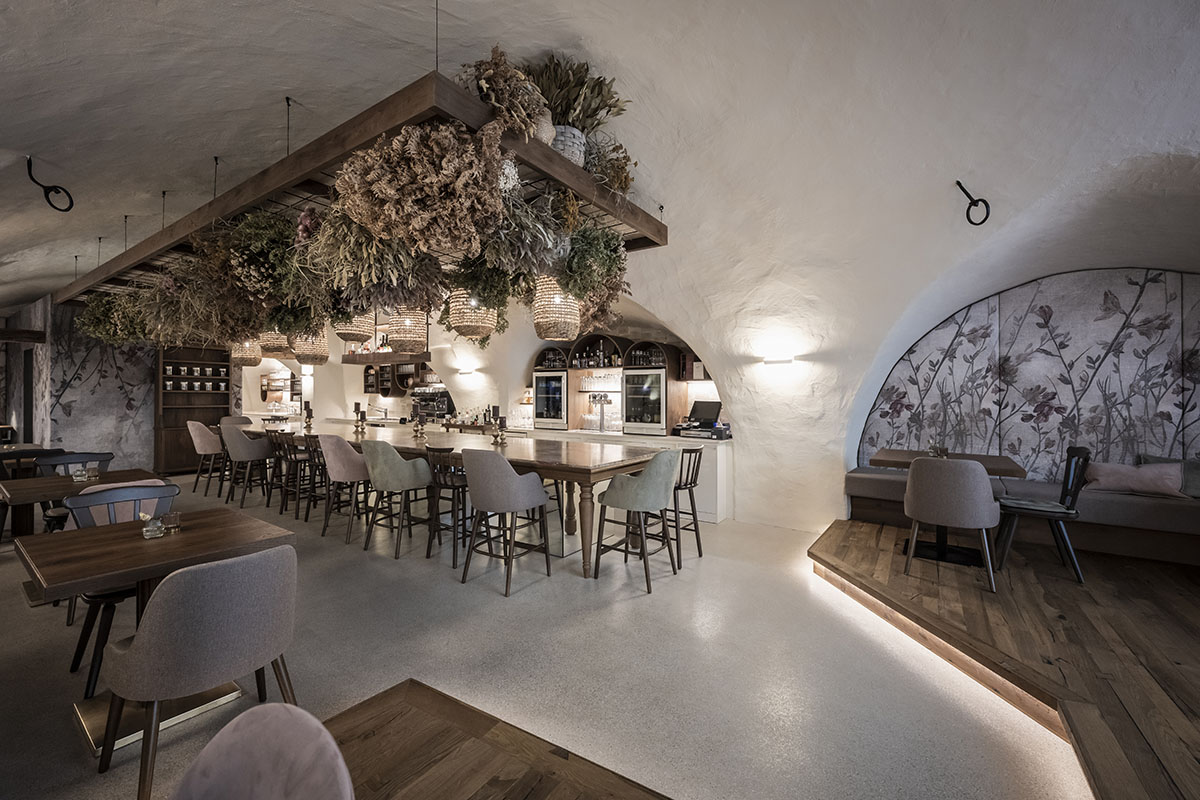 "The house has a fascinating past that goes back centuries and overflows with life and variety," said Stefan Rier, noa* founder and lead architect of the project.

"It has been in the hands of the Teutonic Order, a goldsmith named Hanns in the 15th century, the town secretary Ennthofer in the 16th century, and a long line of families thereafter. With our intervention, we wanted Bolzano's mercantile history to emerge clearly from these walls," Rier added. 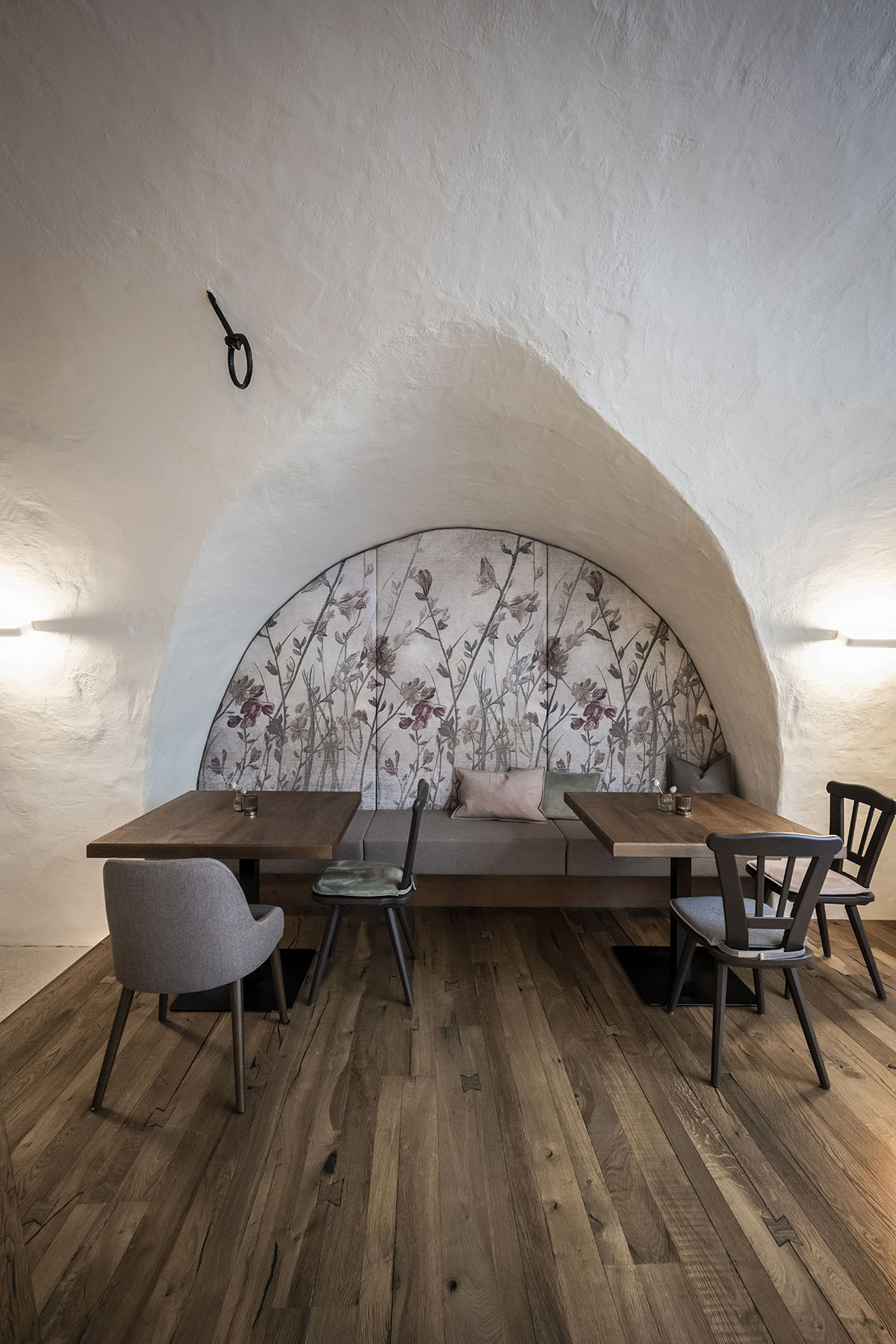 Bolzano's mercantile past echoes through the arcades of Via Portici, the city's main axis, which has been a trading hub for Italian- and German-speaking merchants since the 13th century.

The goods that would later reach the whole of Europe were stored in its warehouses. Like Via Portici, also the northern parallel street, Via Dr. Streiter, has preserved much of its original appearance: today, it still passes through three medieval stone arches. 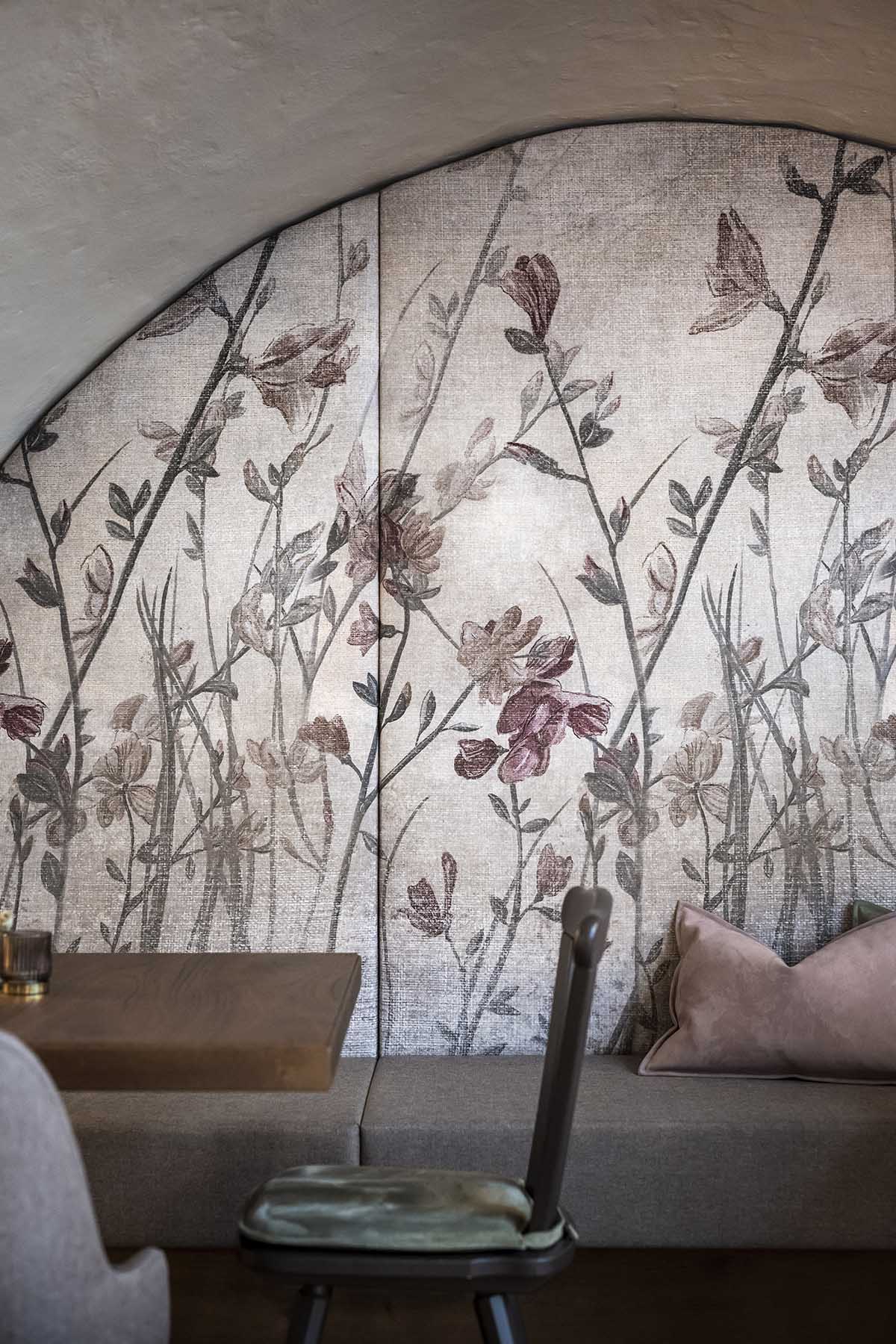 It was mentioned for the first time in a document from 1498 and overlaps the old northern moat of the first town centre. About halfway down the street is a house that is hard to miss: with only two storeys, it is one of the lowest in the neighbourhood.

An external staircase with an open corridor and round-arched portals provide access to the east side of the building, breaking up the compact street front. This house has been the backdrop for noa*'s latest interior design project. 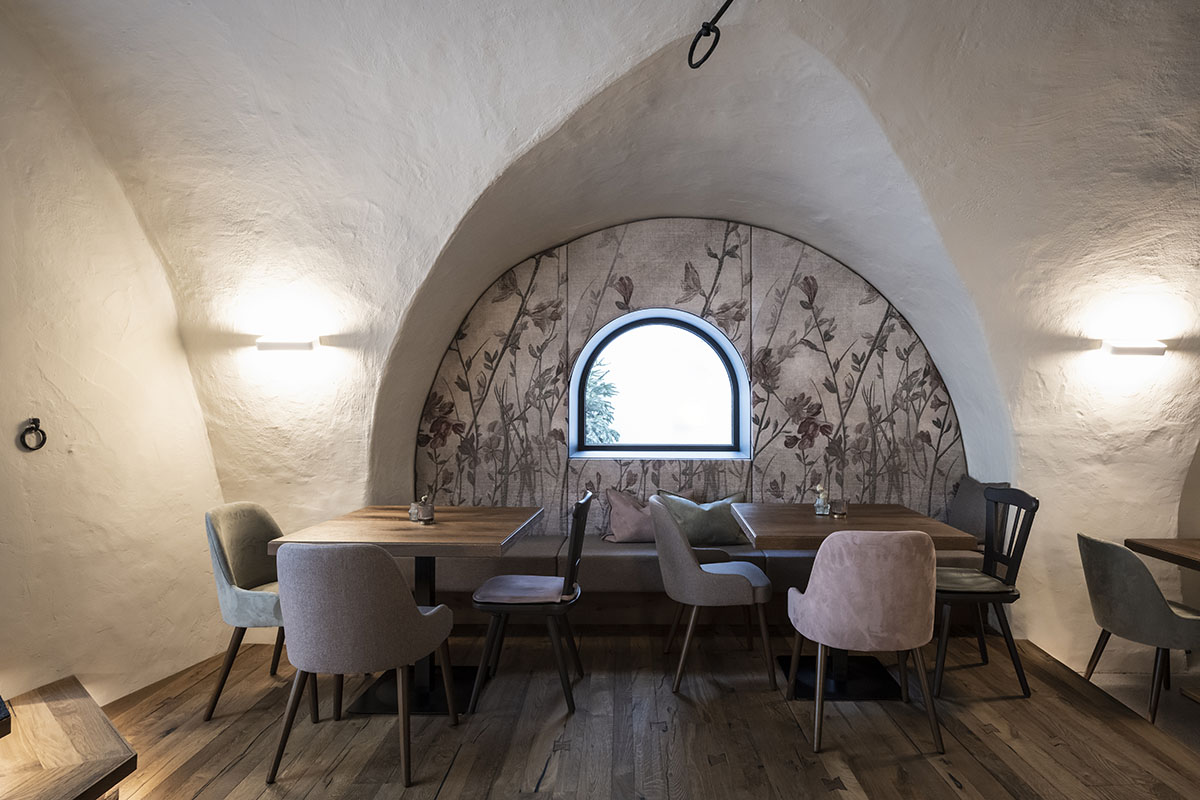 noa* network of architecture analyzed the strong relationship between the history and the building. This was a crucial point in the beginning of the project: both because the house is under monumental protection and because the design team wanted to emphasise to the fullest the original architecture of the arches, to which the bistro itself pays homage with the name "Bogen", German for "arch".

On the exterior façade, noa*'s intervention consists of a careful replastering in smoky white and an enlargement of the entrance arch.

The team uses a new tripartite black metal window that follows the segmental arch and allows good natural lighting while providing an essential and timeless design. 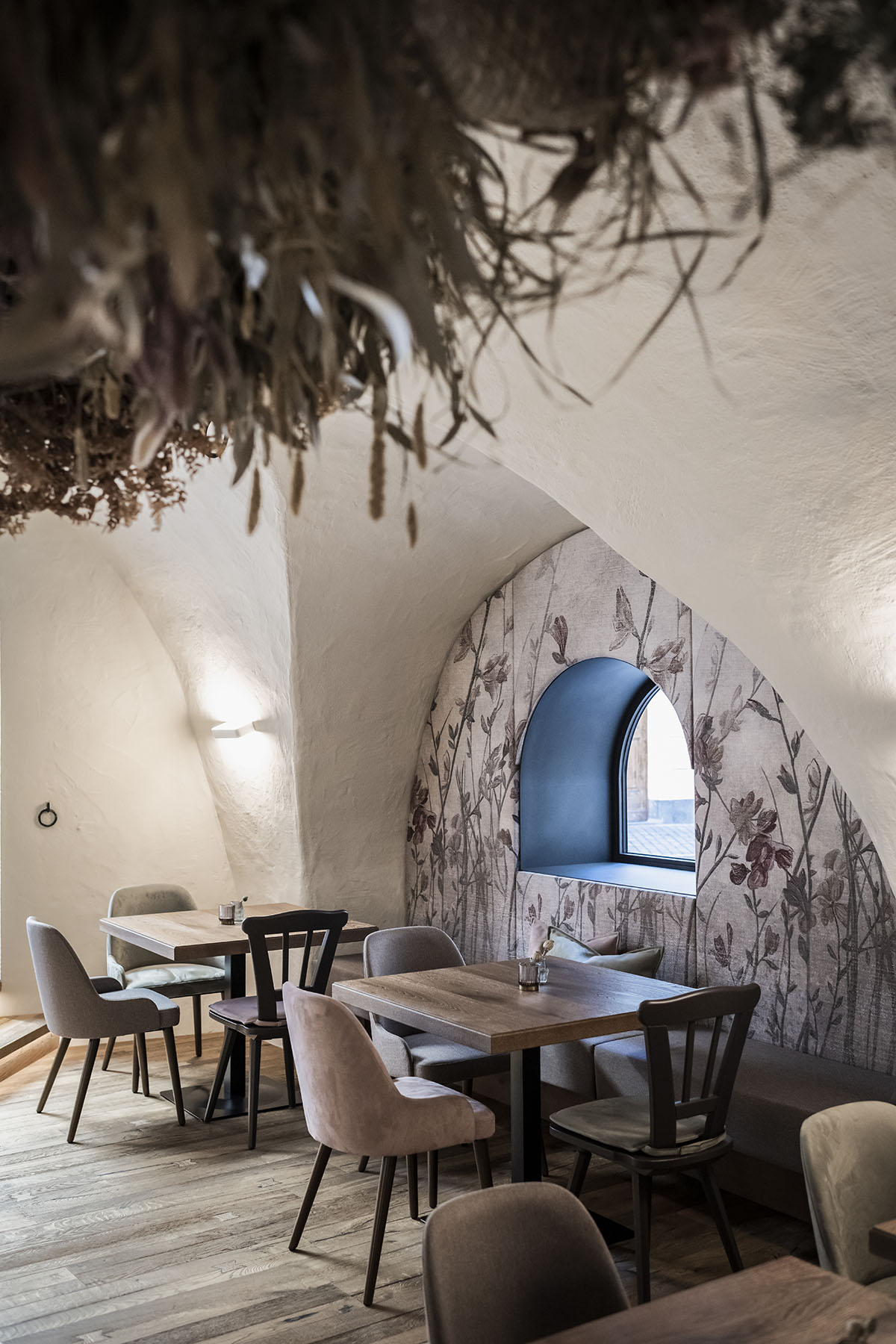 "During our research into the former called Via dei Carrettai, we found a painting by Richard Wolff depicting life at the turn of the 18th and 19th centuries. In the foreground of this fascinating snapshot, we were surprised to see the entrance arch to what is now Bistro Bogen", said Stefan Rier.

For the interior, as noa* stated, emphasizing the four arches formed the initial idea of the project, which on both sides rhythmically mark the almost 19-metre depth of the room. 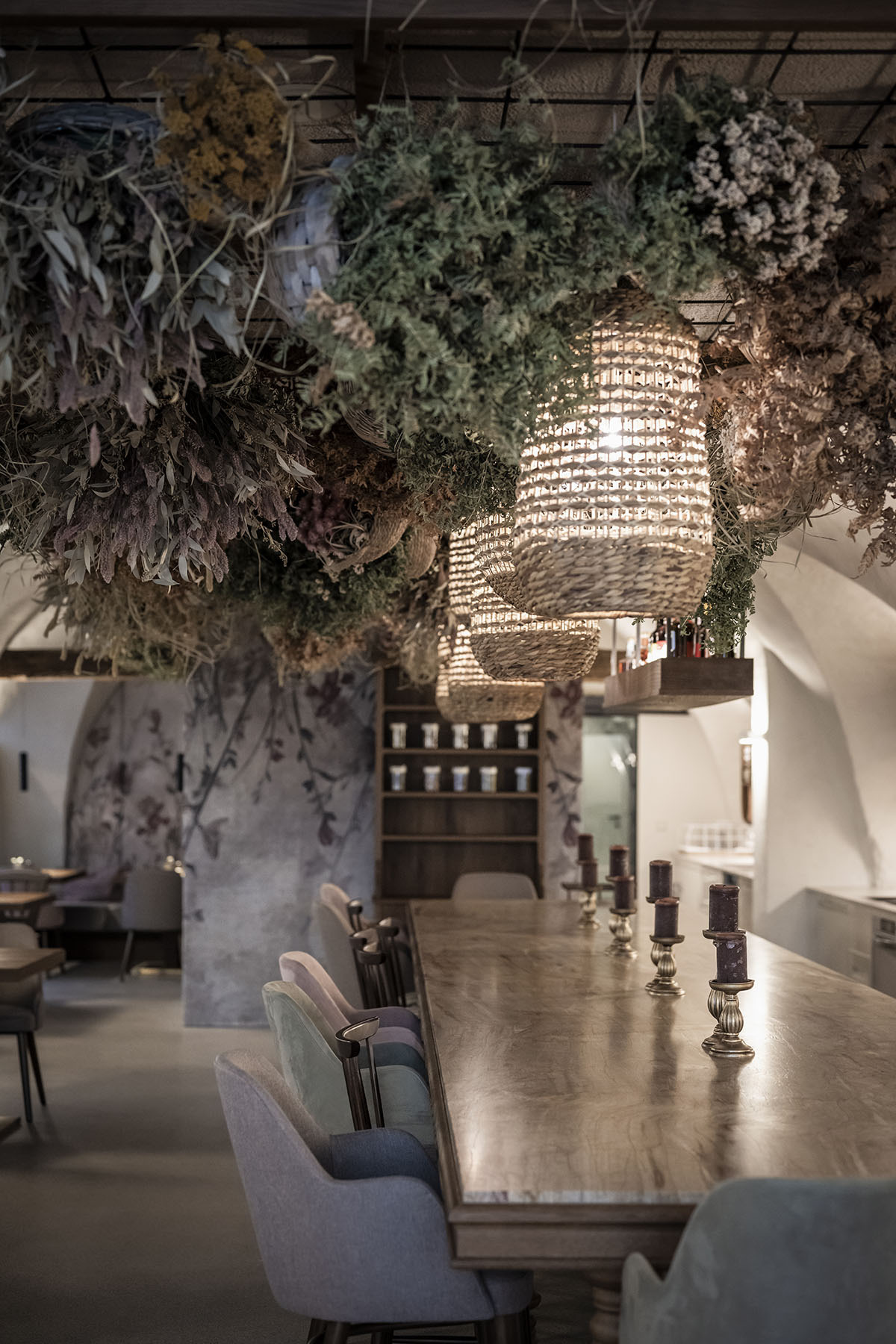 To do so, noa* worked on both the horizontal and vertical dimensions. In the first case, the existing internal height difference was resolved with an oak platform at the entrance, while a grey-beige polished screed was chosen for the floor.

In this way, there is no strong colour contrast with the walls, and the harmony of the shades enhances the whole space. On the other hand, noa* has designed the lighting so that the spotlights gently emphasise the curves of the arches. Except for the two tables at the end of the room, there are no pendant lights; floor lamps provide additional lighting. 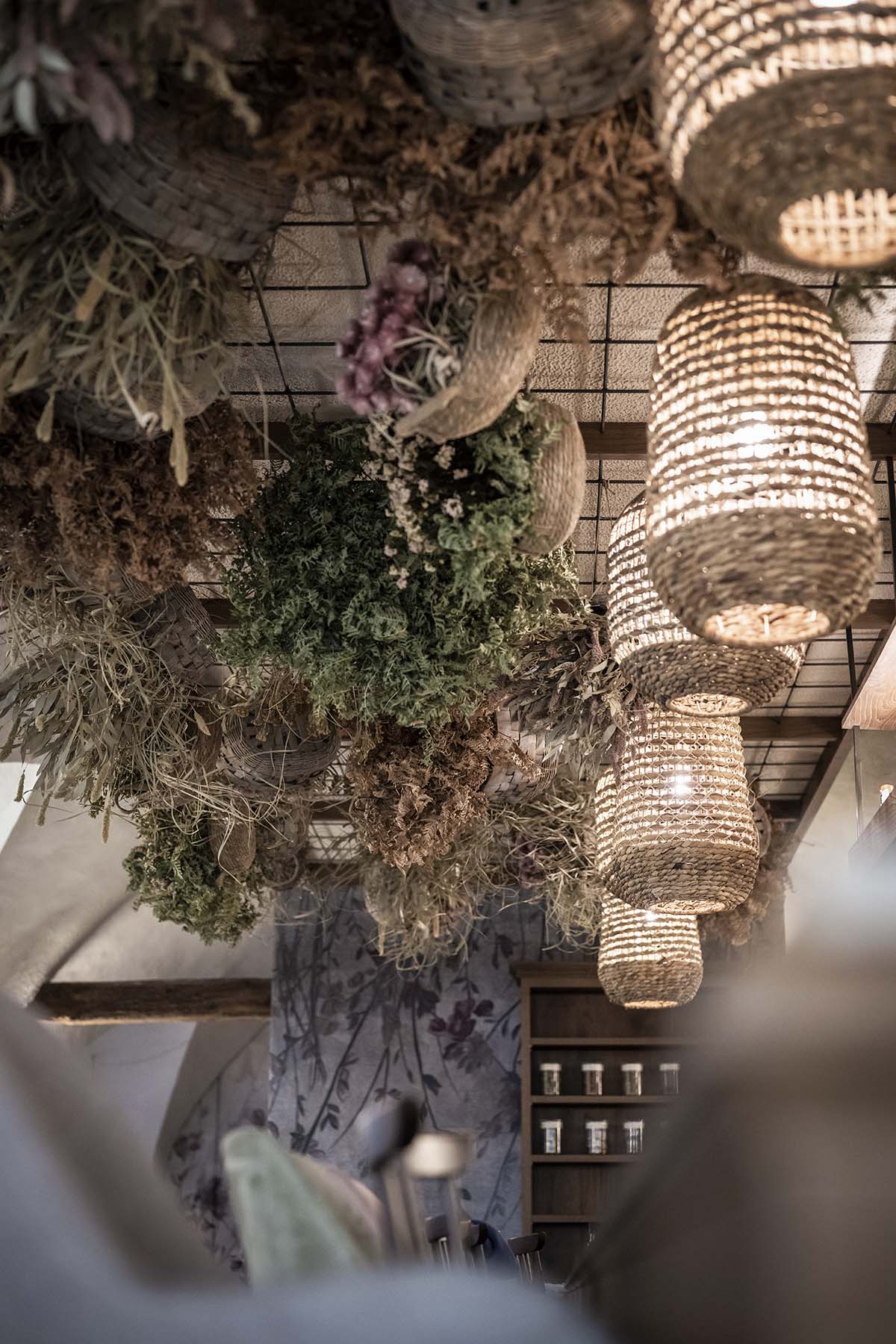 According to the studio, the first meetings of project focused on the ambience of the bistro, the clients' desire wanted have a romantic, bohemian-style atmosphere emerged.

In addition, to support this feeling, the owner of the house, Roswitha Mayr, wanted to give the space a personal touch with her handcraft and artistic talents in the form of floral compositions. 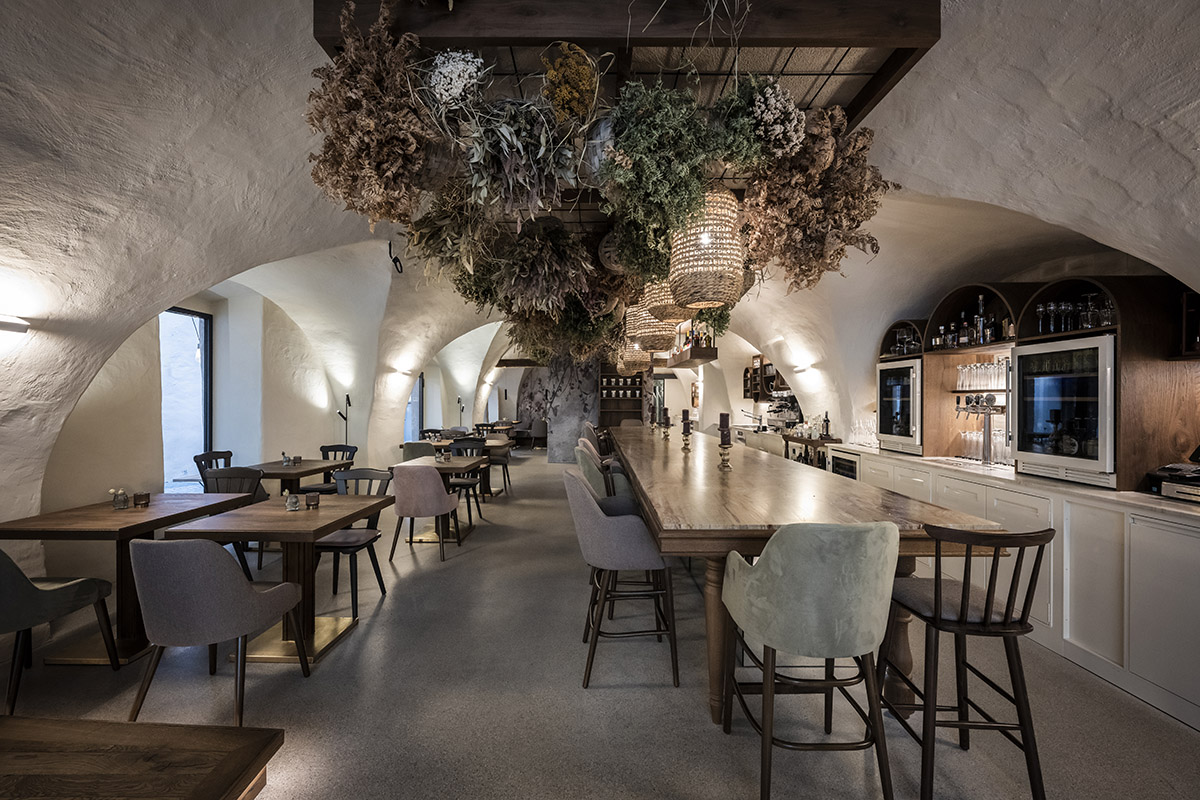 Based on these conversations, noa * took up these ideas and structured the design around a pivotal element: the studio created a welcoming 7-metre long counter placed under a ceiling of flower baskets.

"The upturned baskets filled with dried flowers are a suggestive image that symbolises the transience but at the same time the beauty of life", Marzani added.

The long table as a convivial and informal solution in gastronomic ambience is a recurrent motif for noa*; in this case, the counter is also a worktop on the right side, without any stools and housing technical compartments. 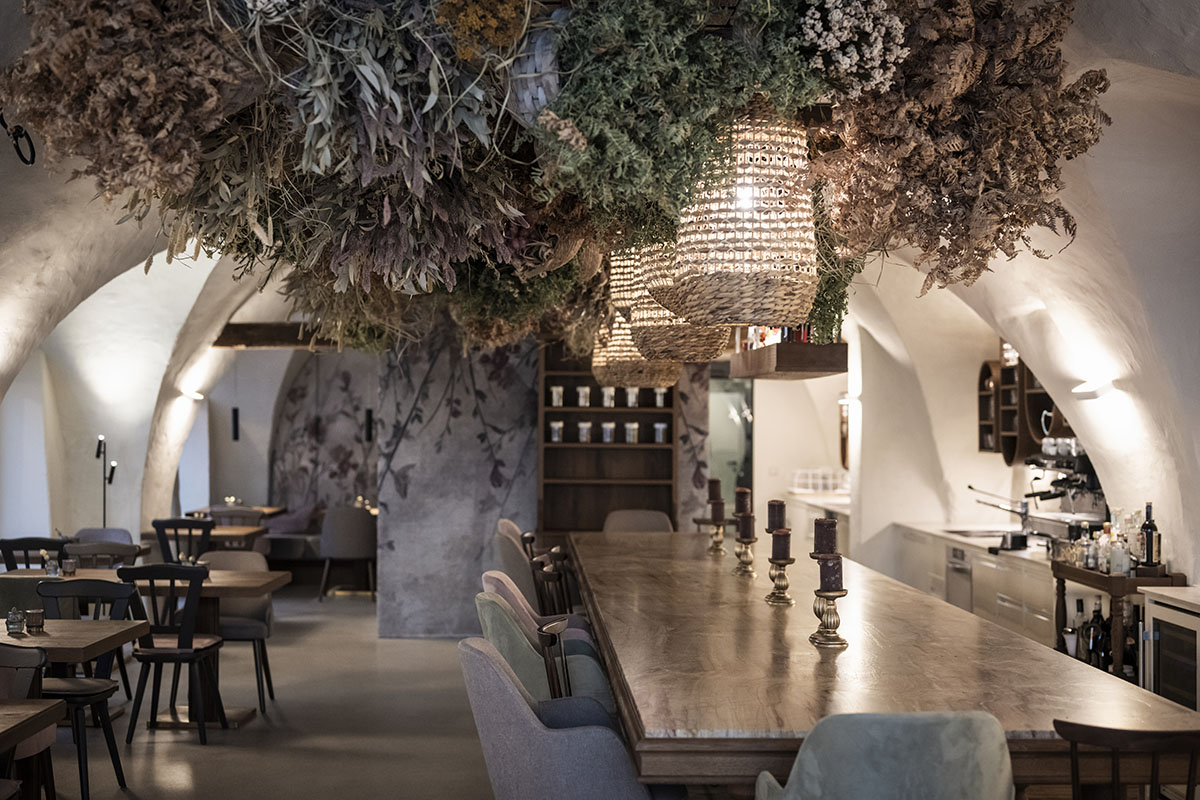 Other interesting details make this piece of furniture unique: the six legs are one different from the other and suggest an improvised table that a family might have made for itself.

A mirror covers the central base and makes it disappear into the room. The top is a slab of Nacarado stone, chosen for its distinct veining and warm colour. 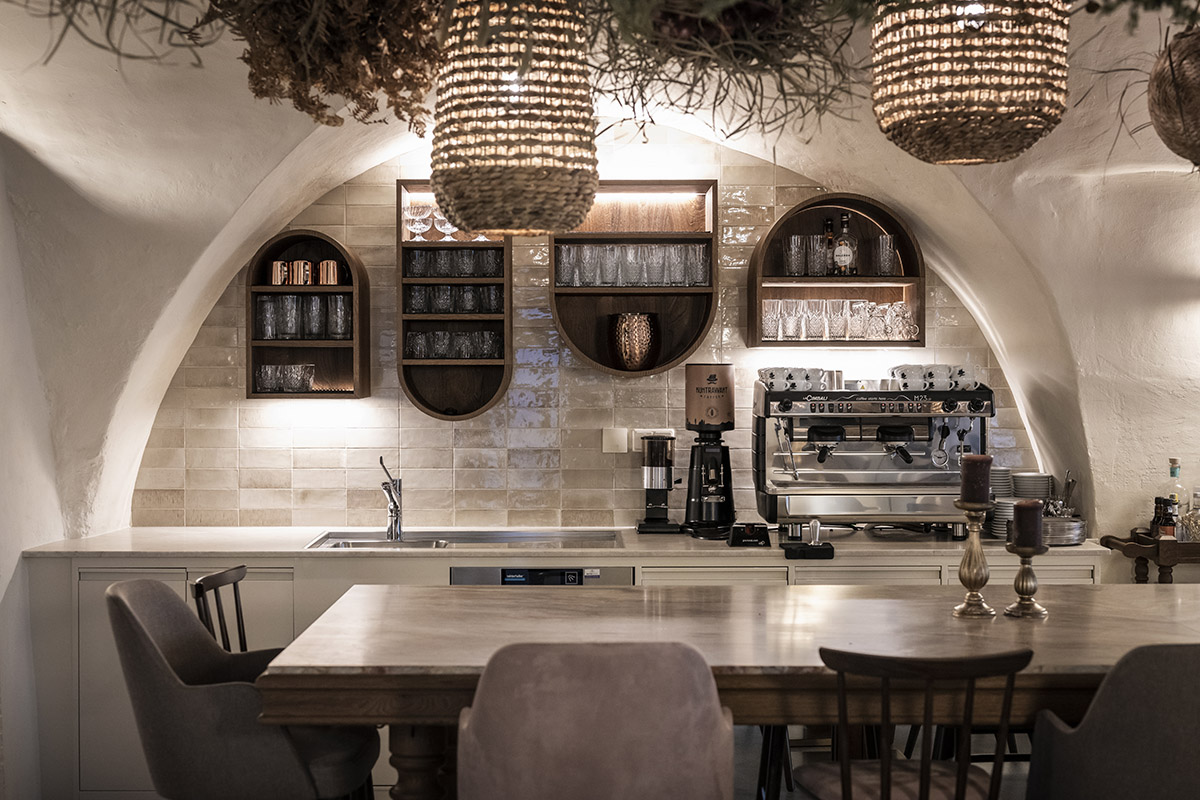 Above the table, Roswitha's personal creation is the large floral composition that seems to pour from the ceiling. The hanging rattan lamps, which also recall the basket motif, find their place among the flowers. 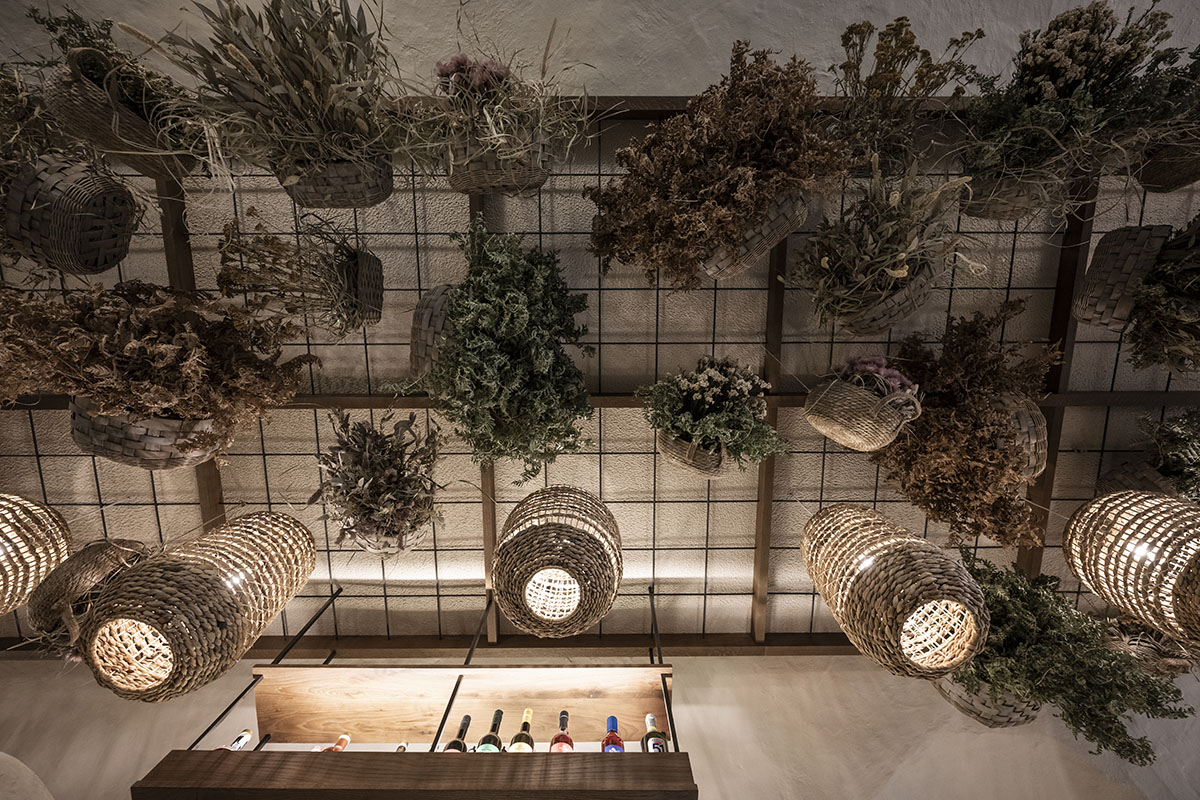 Cozy alcoves are at the heart of the bistro

The interiors are organized according to groups or individual customers. While tables for 2 or 3 people are lined up around the deep alcoves and overlooking the alley, the large table reserved for the group immediately catches the eye in the middle of the space.

The architects bring out the feeling of privacy even more in the first pair of arches, with recessed seating and walls covered with elegant floral-print fabric. 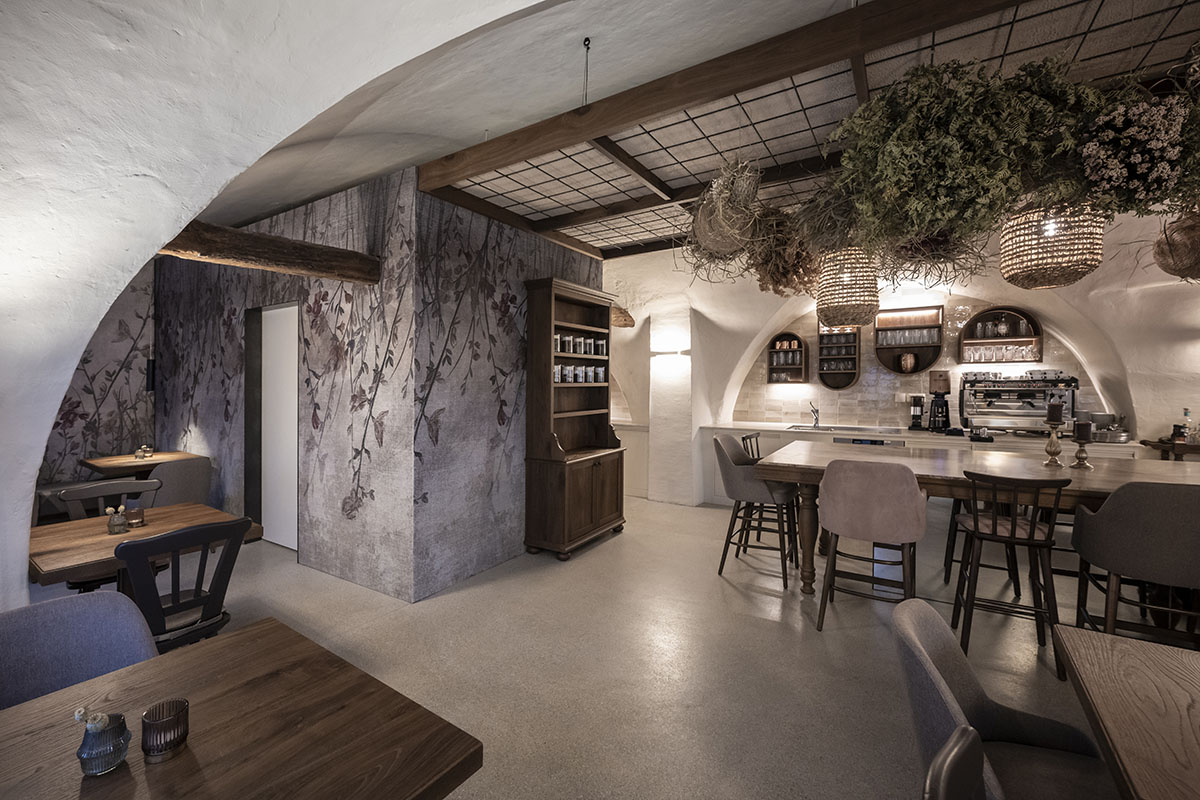 The niche closing off the room is also designed in the same way. noa* aims to establish a continuous dialogue between the past and the present and chooses to replace the new chairs made of wood and fabric with new lacquered vintage chairs.

"We took care of every detail in this project and managed to create a consistent design with a strong contemporary character within a centuries-old structure. A step into Bolzano's present and past at the same time," Silvia Marzani continued. 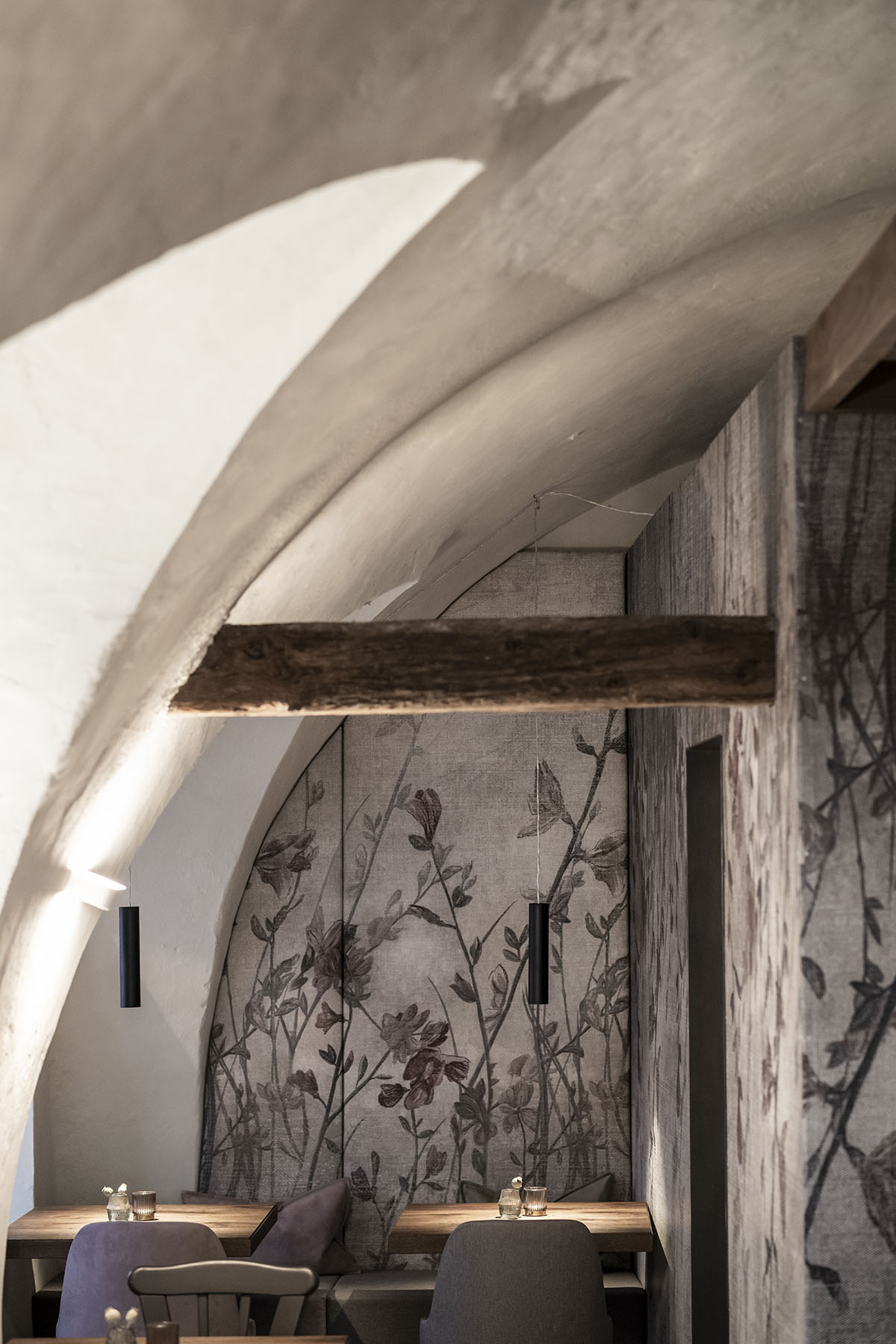 The studio designs two service areas: the kitchen, which has been completely renovated and is located at the end of the room, and the toilets.

These have been accommodated in a box, clad with perforated metal panels, on which the same floral motif of the arches has been printed. 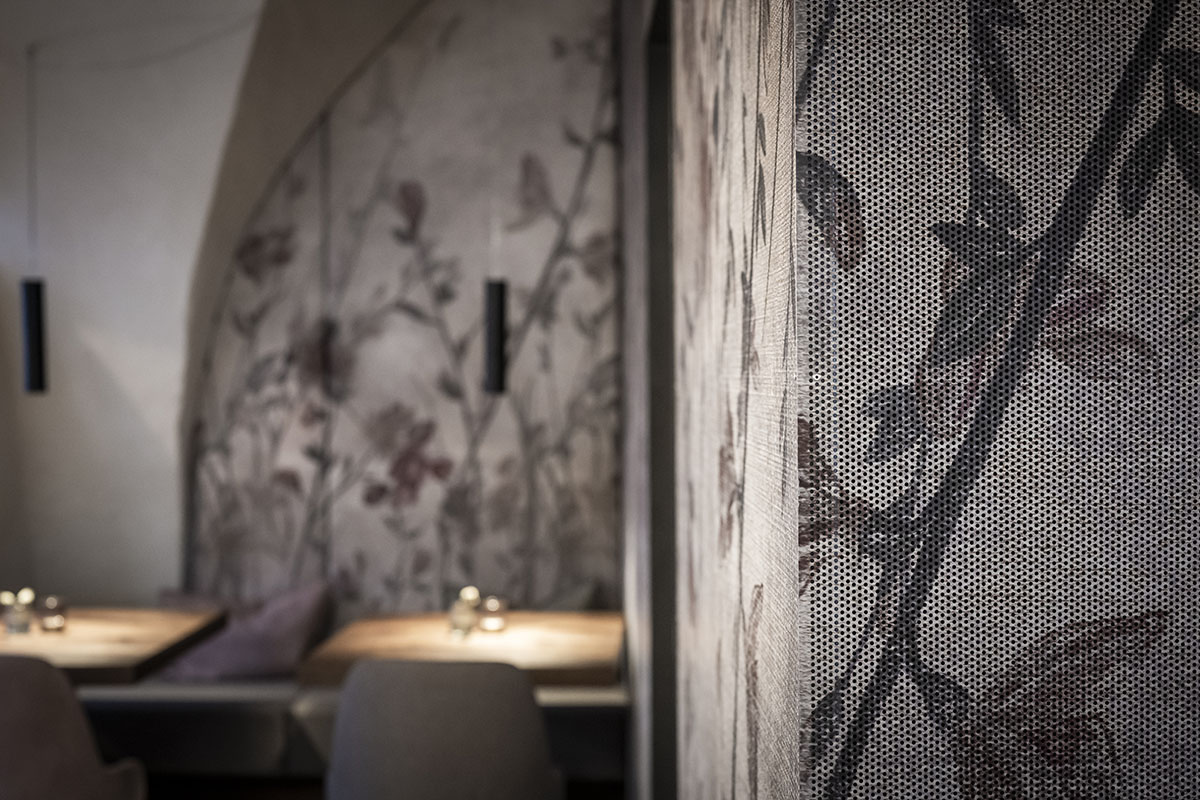 In this way, noa* combines the technical requirements of acoustics with the venue’s aesthetics: the insulation panels are not visible under the perforated metal surface. 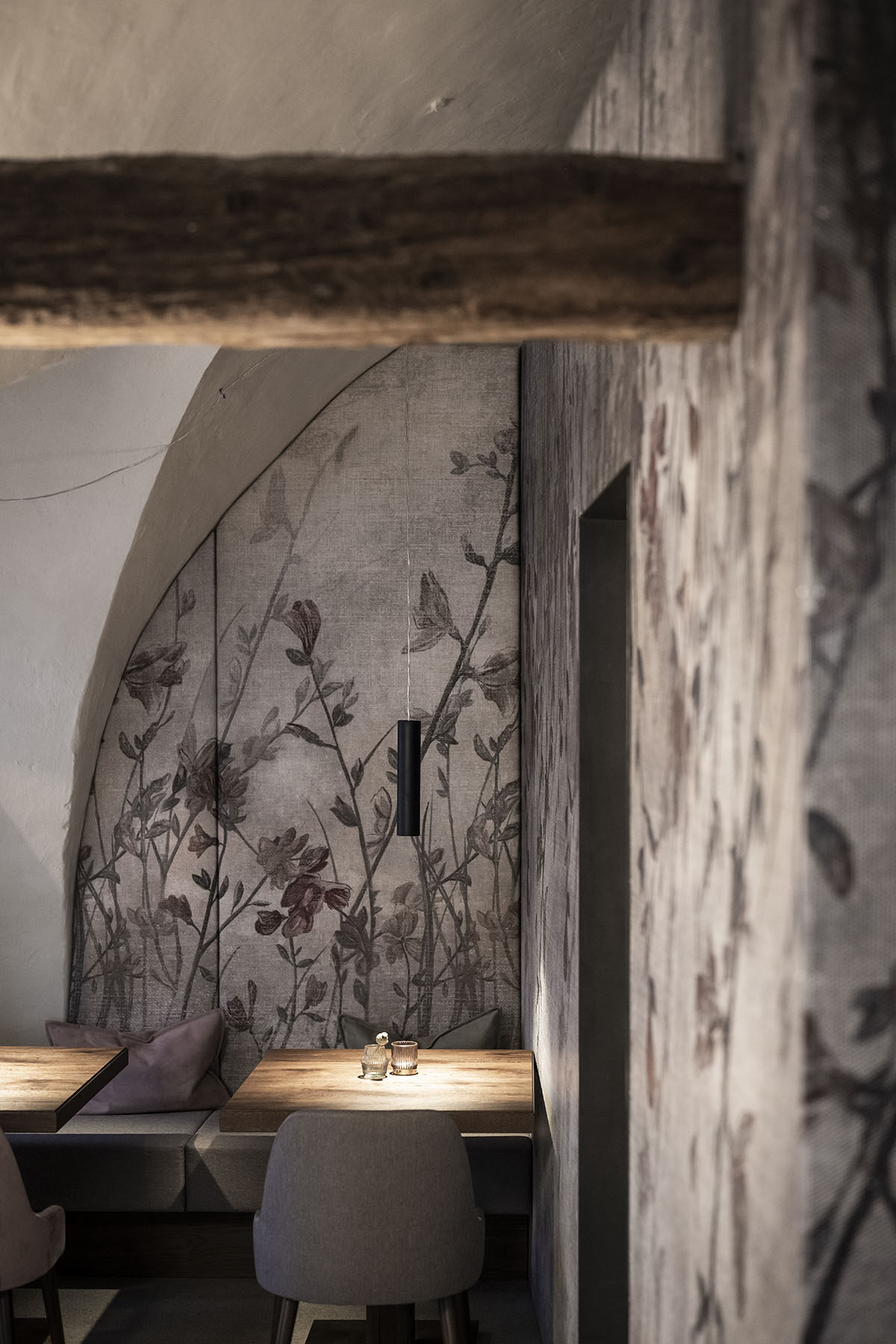 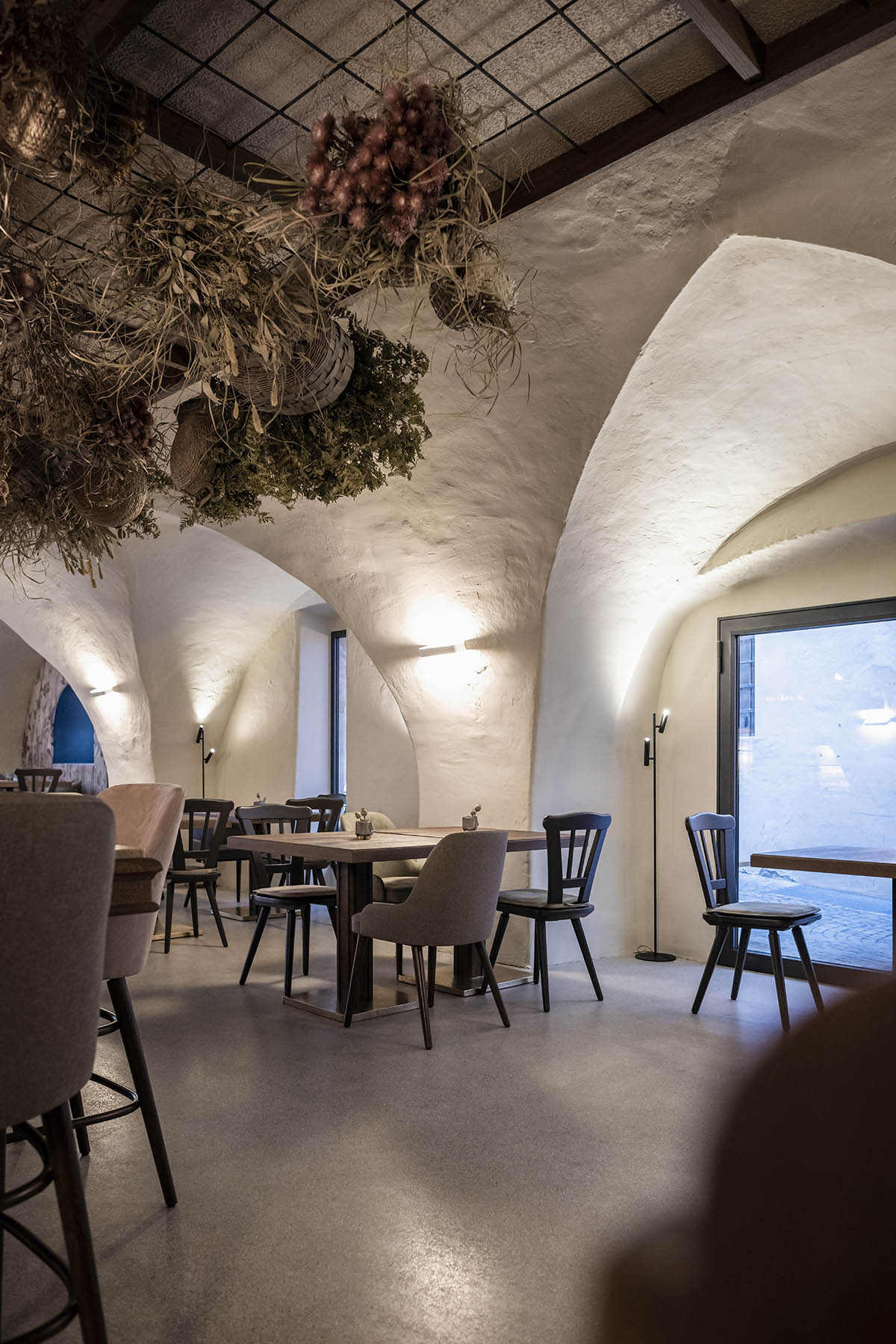 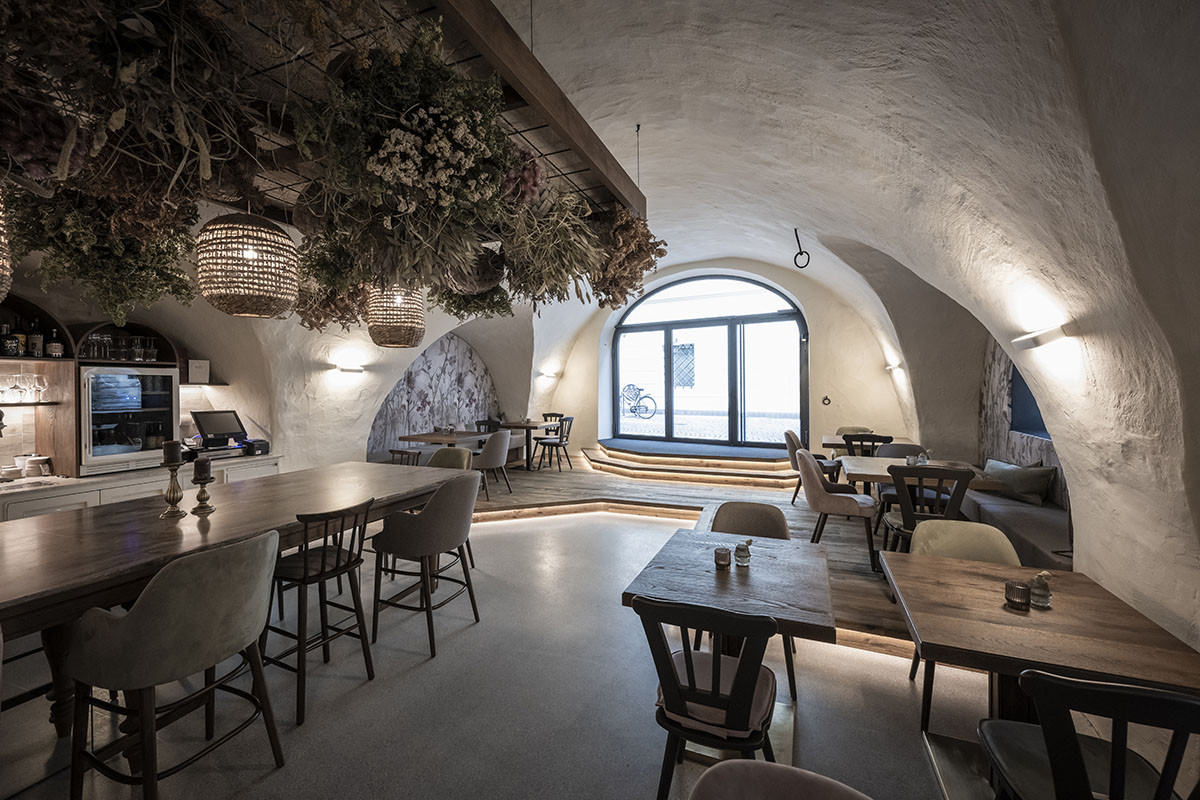 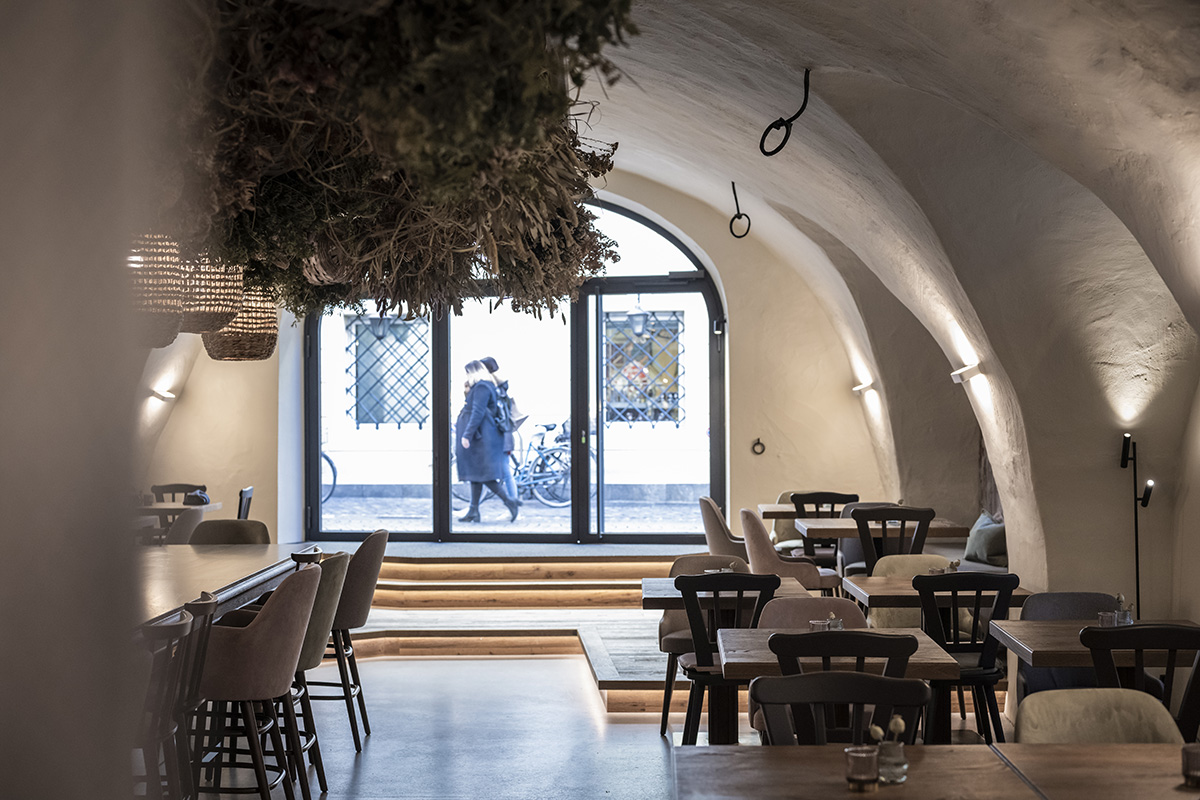 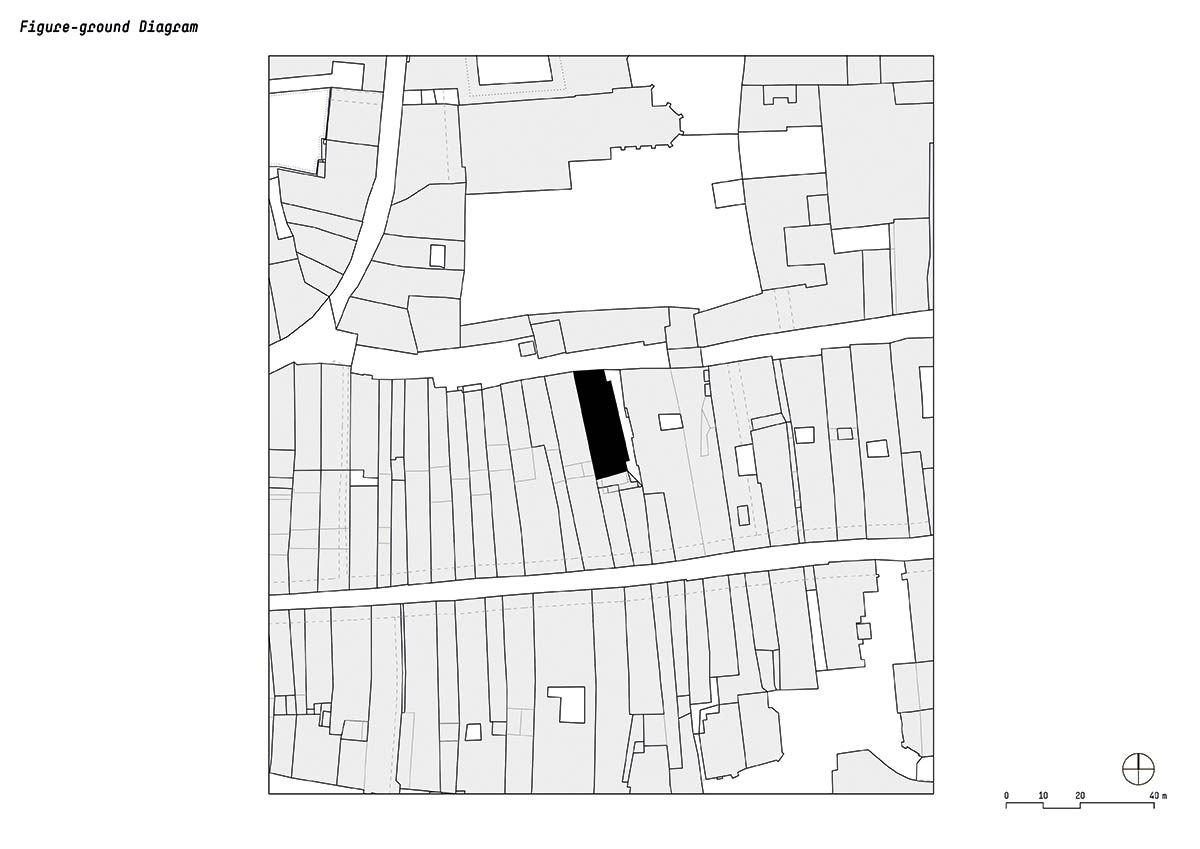 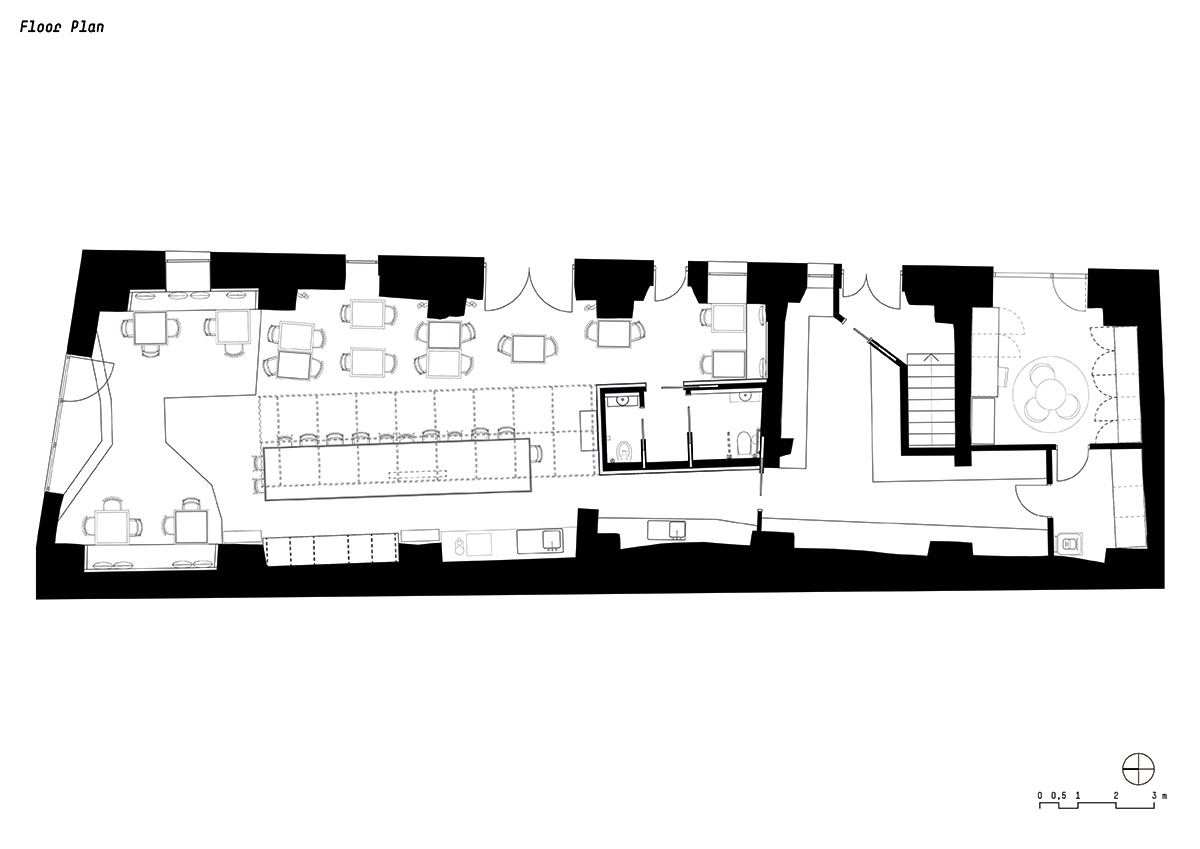 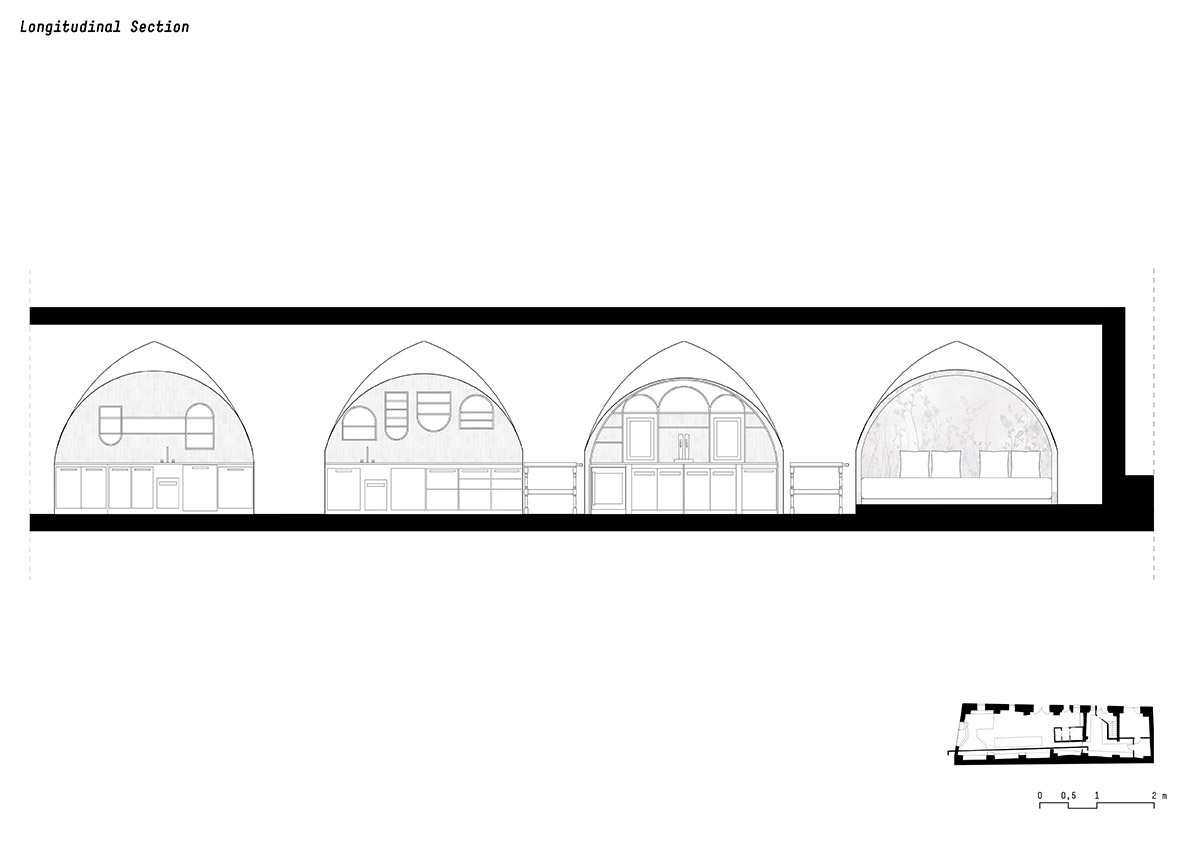 noa* network of architecture recently converted a 18th century hotel building in Paris into an apartment. The studio also transformed a 17th-century monastery into a hotel and spa in Arco, Alto Garda, Italy.

noa* is an architecture firm led by founders Lukas Rungger and Stefan Rier and based in Bolzano, Italy and Berlin, Germany. The studio explores and examines interdisciplinary methods of design, continuously evolving depending on both nature and requirements of each project.