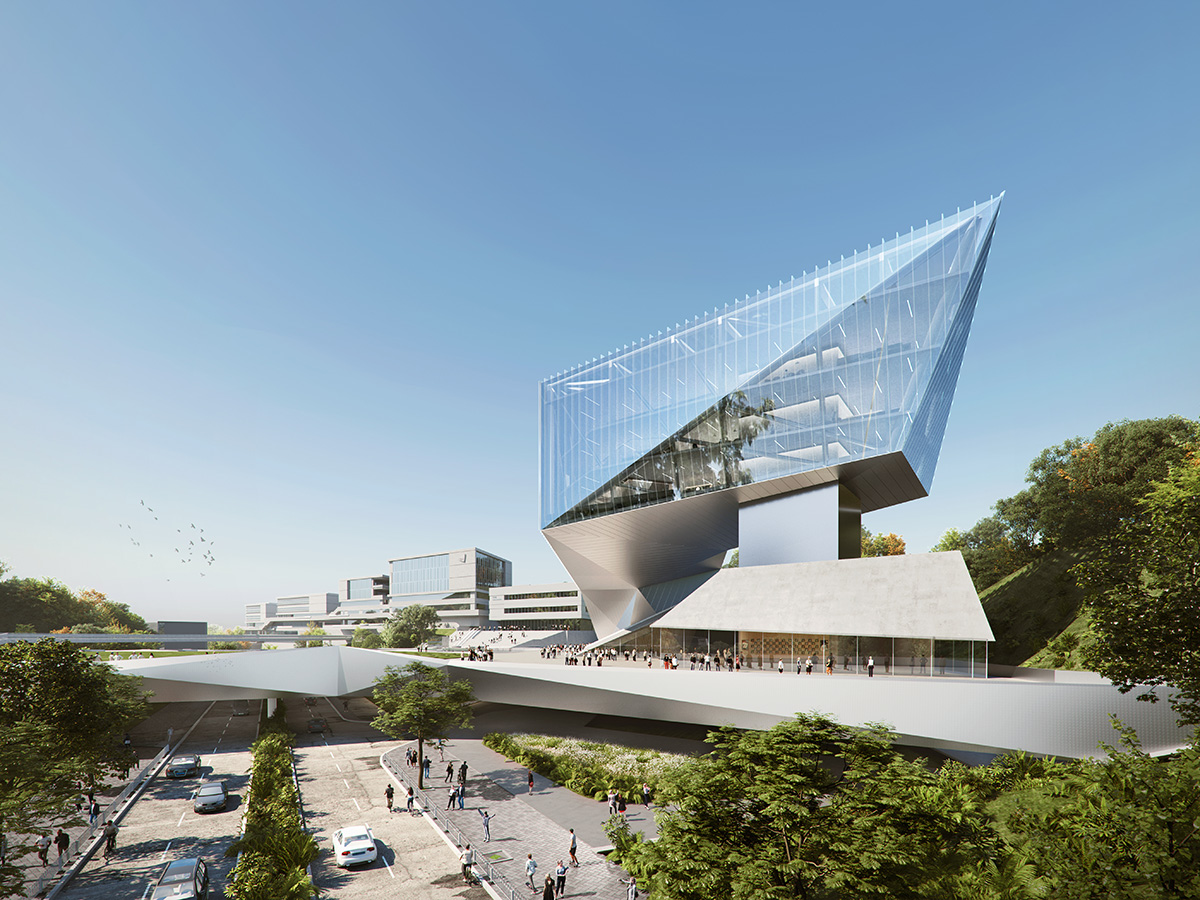 Called City University Hong Kong Dongguan Campus (CityU Dongguan), the 300,000-square-metre campus, which will be home to the Faculty of Science, Engineering, Business, and Medicine, has topped out and is scheduled to open in 2023. 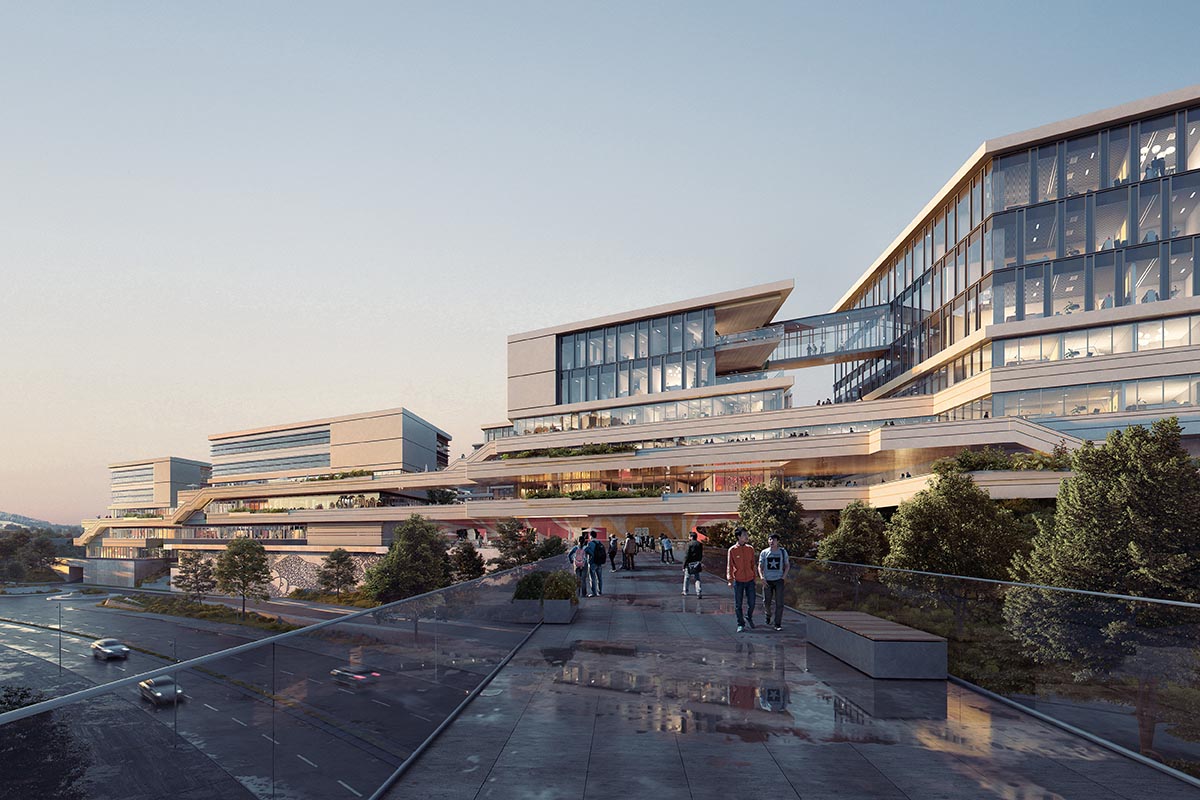 CityU aims to unify the high-end research facilities of Hong Kong and the manufacturing power of Shenzhen to create a new science and development region in the country.

Due to the close location of the campus to the China Spallation Neutron Source (CSNS), one of the largest scientific research projects in China, and the Songshan Lake Materials Laboratory, the new campus is intended to allow to merge topics ranging from neutron scattering to wearable technology.

The new campus is organized along a diagonal grid and divided in half by a road running from the north to the south. Harnessing the momentum of this strong central axis, HENN’s design boomerangs across the site and bridges the road with an elevated platform known as the Academic Spine. 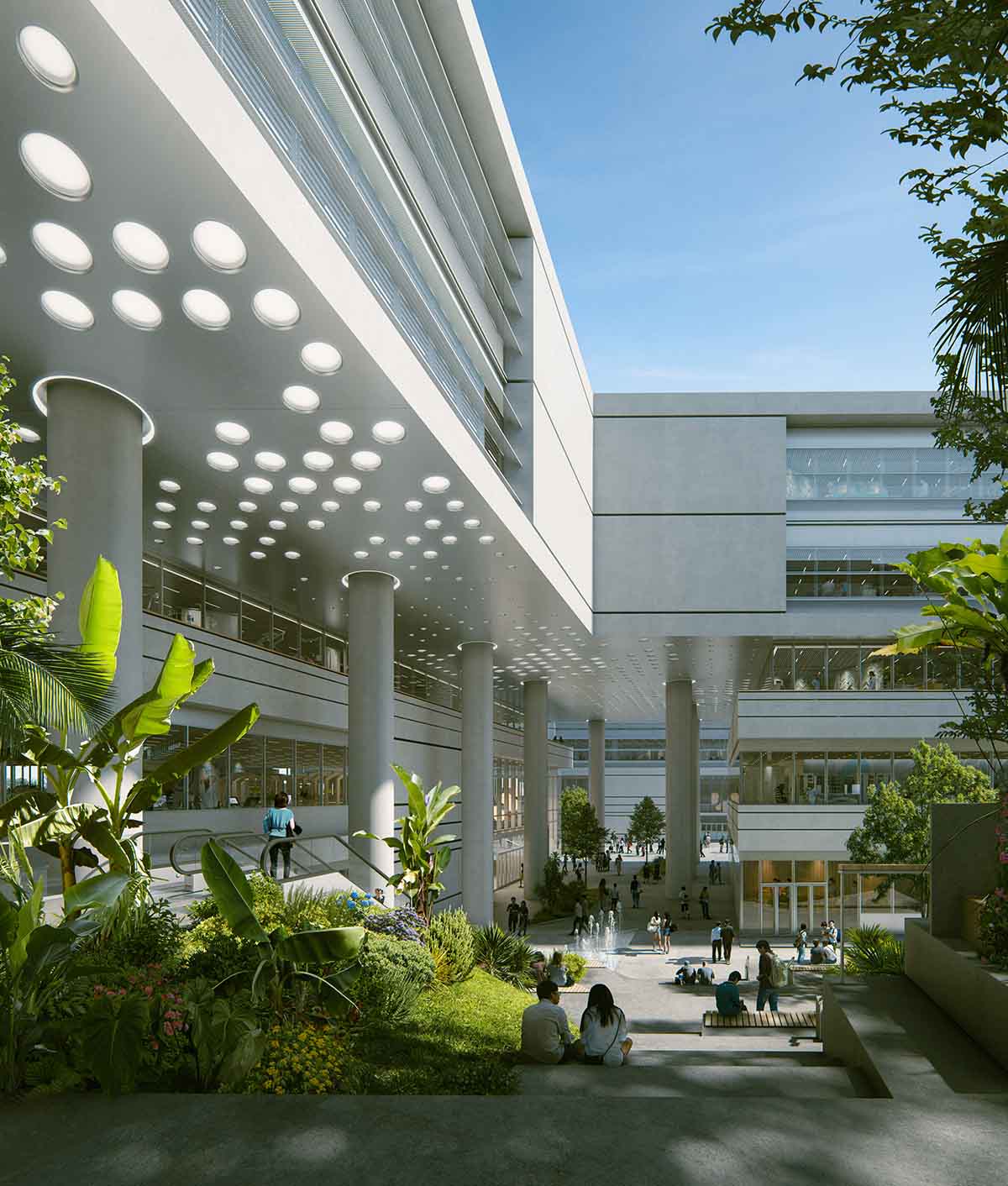 The spine organizes the campus physically and conceptually: as the main circulation route through campus, the elevated platform navigates the site’s mountainous topography and creates connections between the University’s academic and research programs.

Four faculties, sports facilities and administrative buildings on West Campus with the laboratories, classrooms, dining hall, and media center on East Campus are connected to the main spine.

At the heart of the campus, the Spines widens into a large plaza containing the Central Library. Residential towers define the edges of the campus, offering centrally-located accommodation for students and a direct connection to the surrounding landscape. 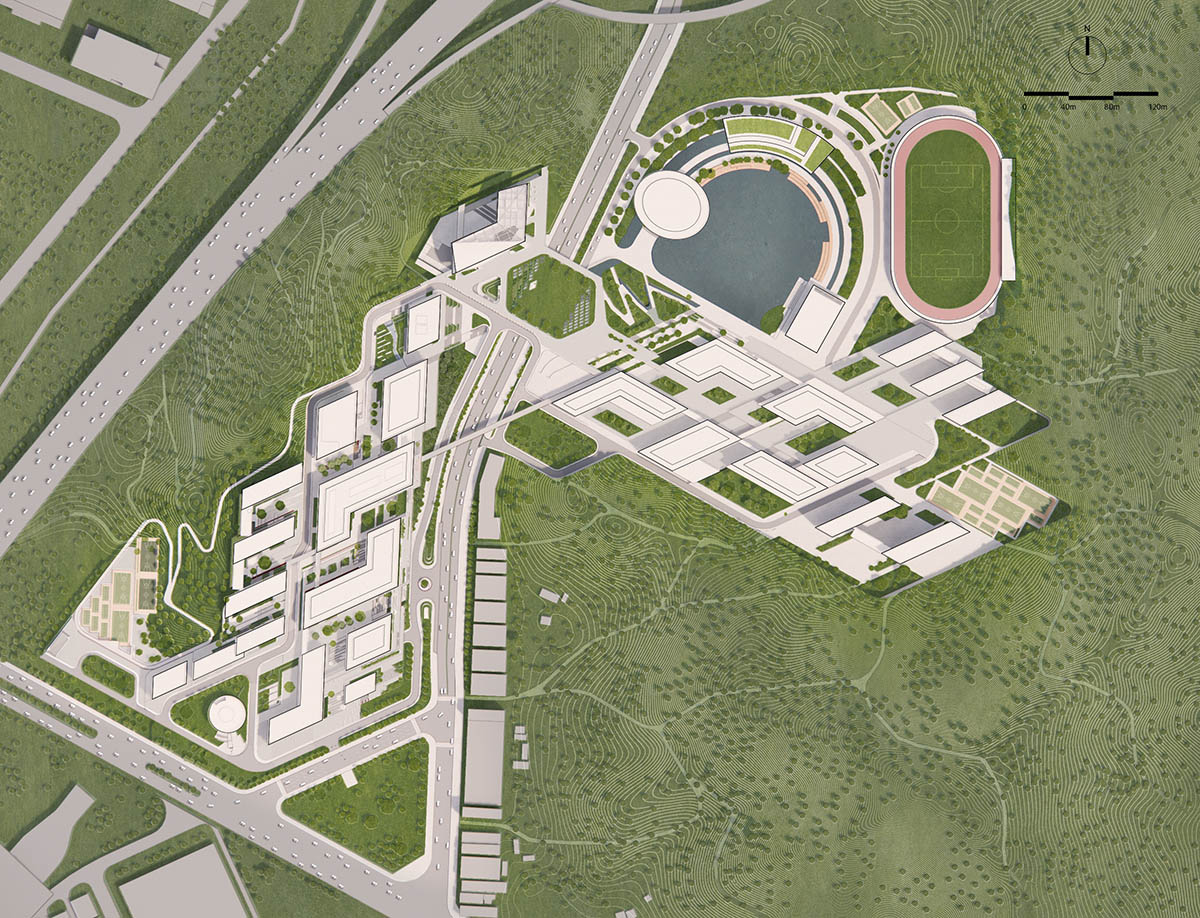 The 300,000-square-metre campus is organized along a diagonal grid and bisected by a north-south road

The project will be completed in two phases: The Central Library, a strikingly angular design with a 50 meter cantilever, will be part of the first construction phase and serve as a symbol of the University and a new landmark for the city of Dongguan.

Construction of labs, classrooms and amenities will be evenly distributed across the two phases to allow for greater flexibility. 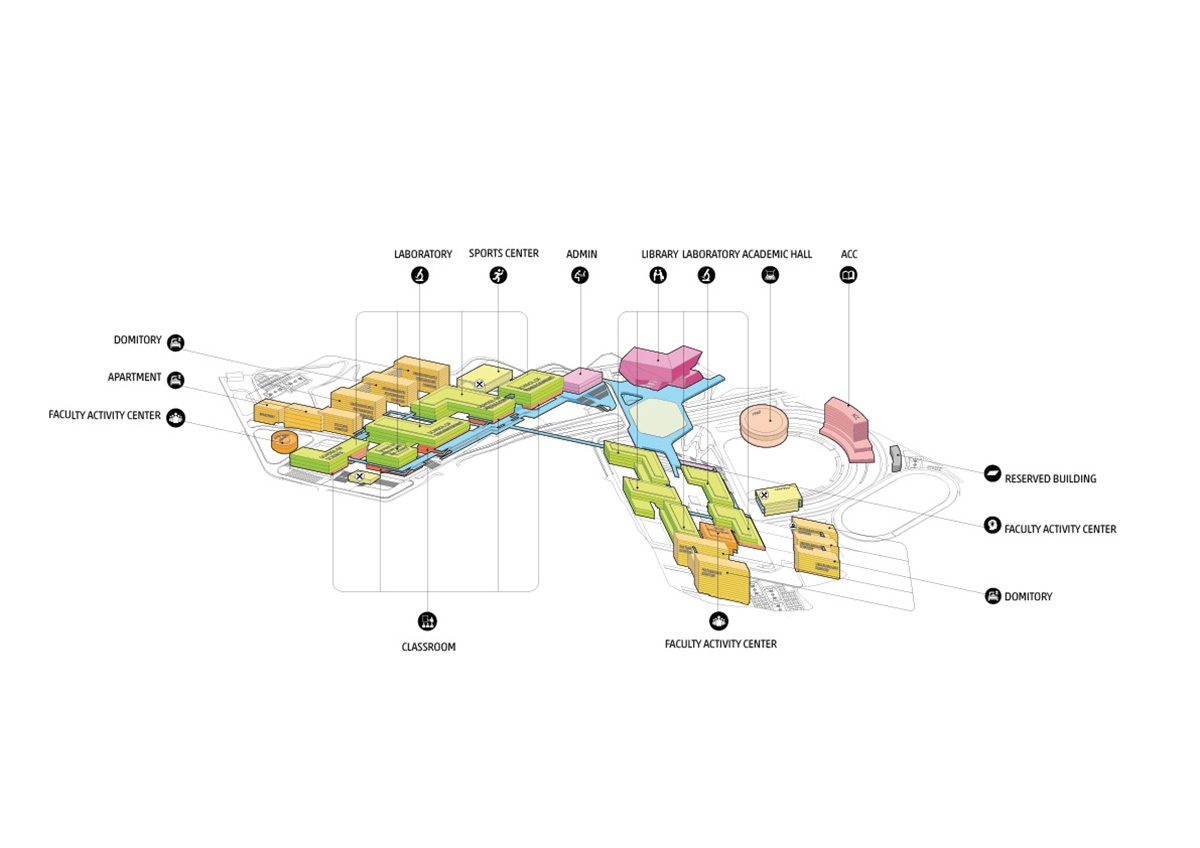 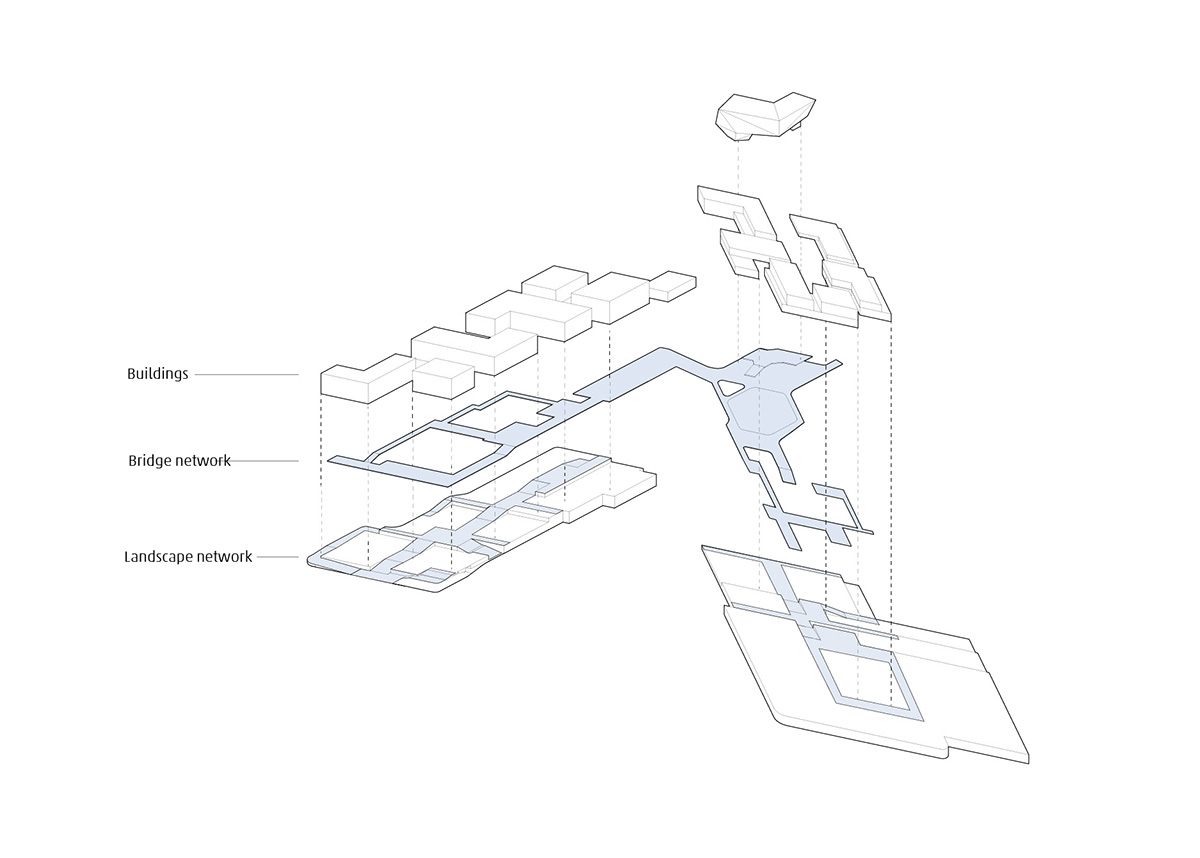 Phase one of the project will be completed in 2023, while phase two is scheduled for completion in 2025.

When complete, CityU is the latest project added to HENN’s growing portfolio of universities and research facilities in China.

Westlake University in Hangzhou and the IHM Innovation Center in Guangzhou both opened this year. HENN's Aviation University is currently under construction in Hangzhou.

All renderings & drawings courtesy of HENN.