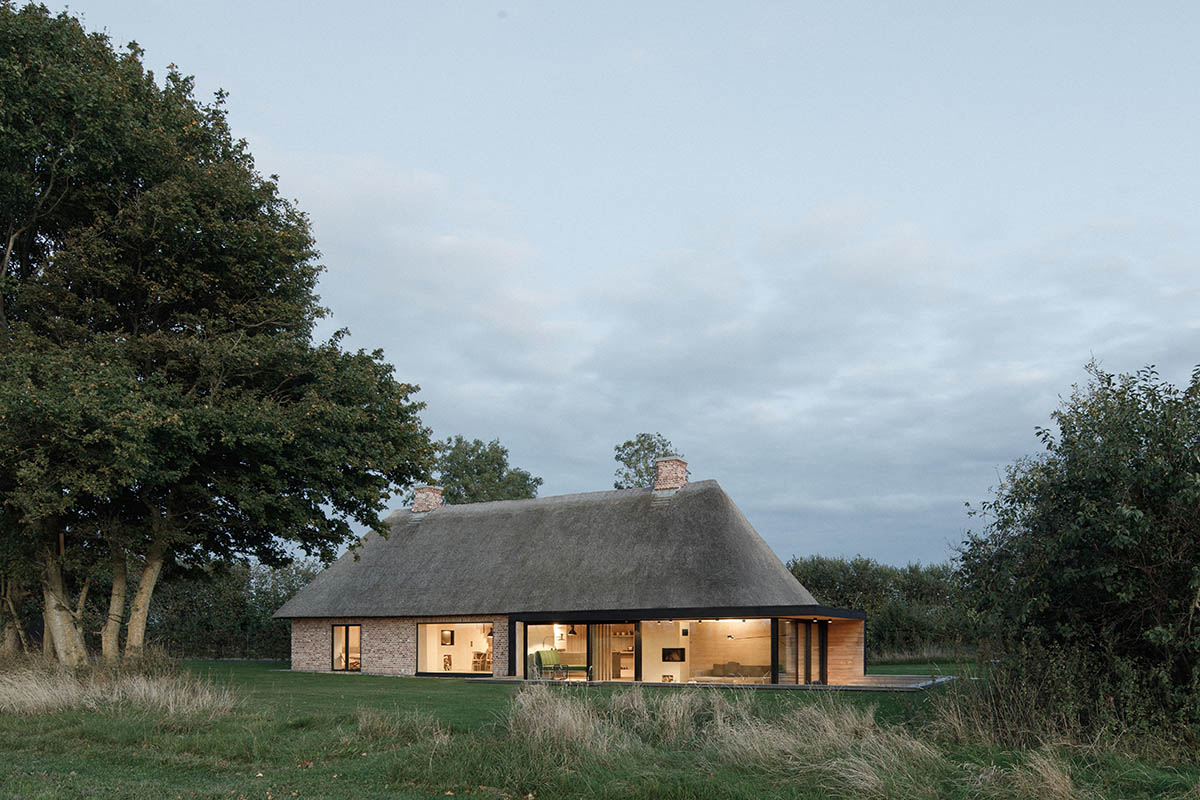 Named Nieby Crofters Cottage, the thatch roofed, brick cottage was originally built by tenant farmers - also known as crofters - from a nearby estate in the late 1800’s. 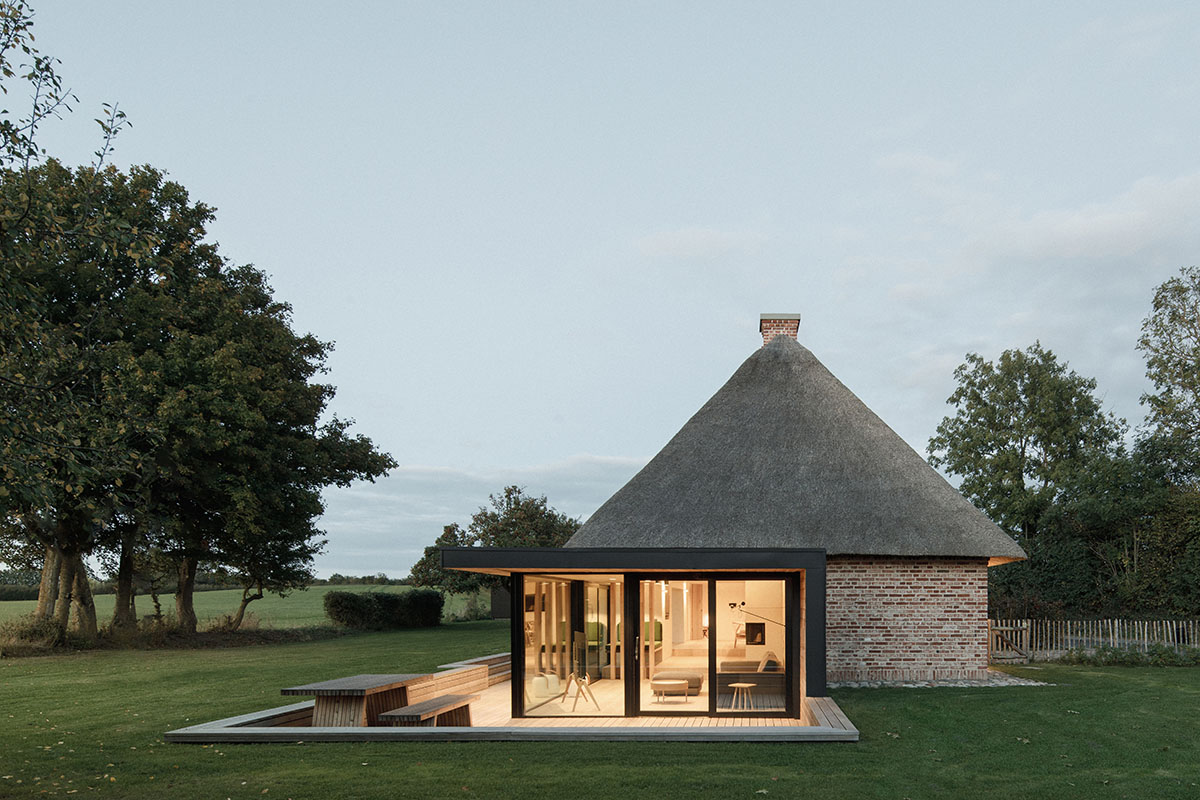 The old cottage was in a dilapidated condition when the current owners purchased the cottage after it had been abandoned for over a decade. According to the architects, the dream of the owners was to live in a contemporary country retreat.

The current owners, who are living in Hamburg, commissioned the architects Jan Henrik Jansen and Marshall Blecher to renovate and modernize this cottage to create a contemporary retreat and make a livable space. 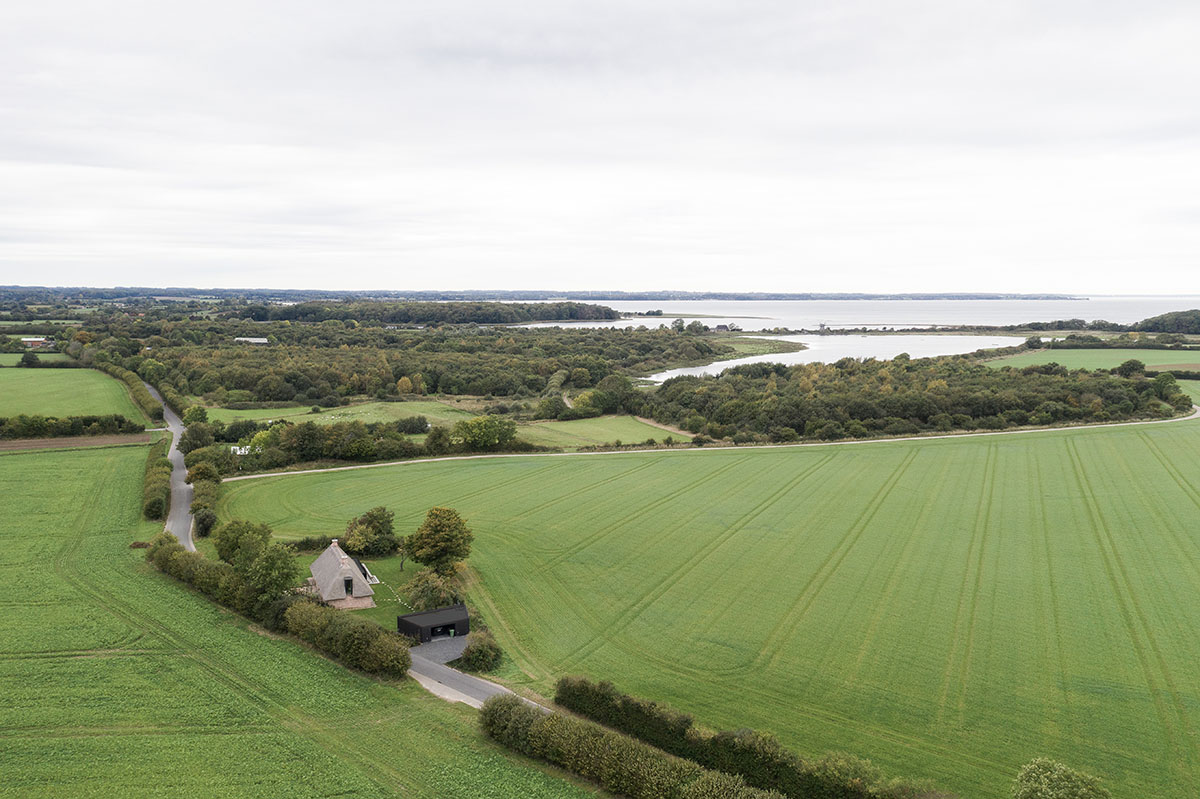 Located on a small triangular plot of land surrounded by barley fields and faces toward the Geltinger Birk nature reserve where wild horses and deer still live amongst the marshlands, the architects saved the house from its dilapidated appearance and renovated almost all parts of the house.

"The house had such low ceilings that they were unable to stand in most of the rooms," said the architects. 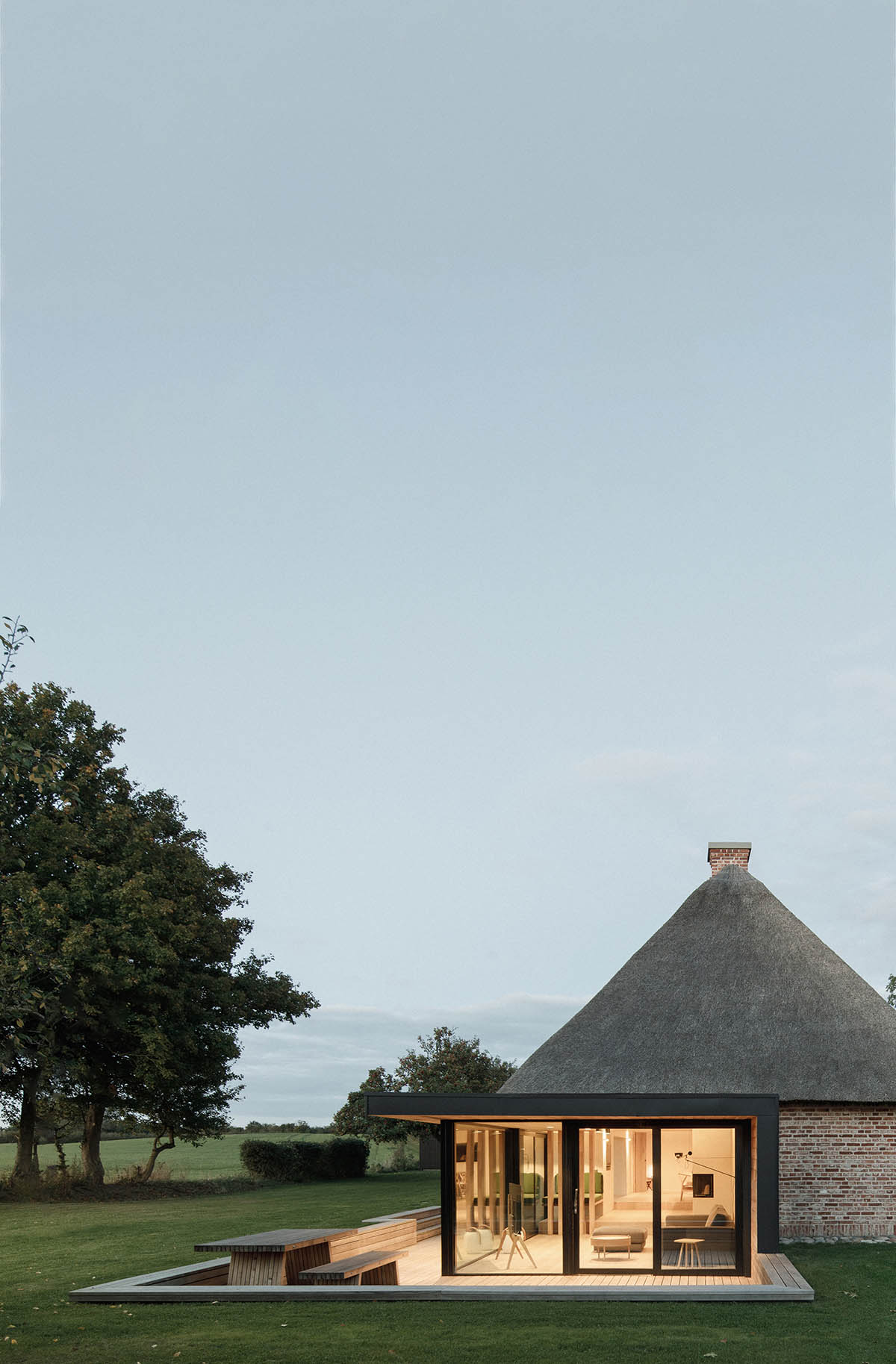 During design and construction process, the architects gave much attention to maintain the historical appearance of the cottage in an area where many similar buildings have been renovated beyond recognition.

At the back of the house, there was a pigsty with multiple sheds and the roofs had partially collapsed. The architects replaced a former pigsty with a glazed extension with a sunken timber terrace. The new glazed extension becomes a visible part of the new living-dining room, adding a cinematographic effect to the house. 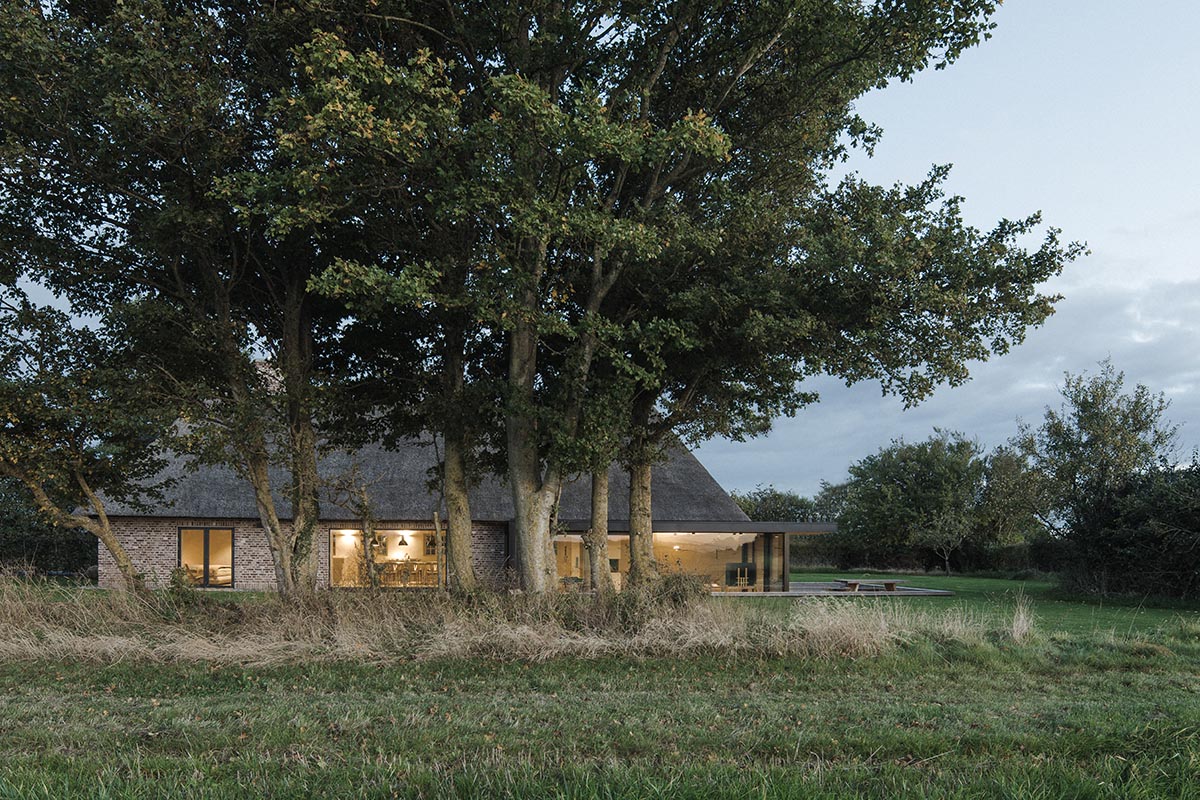 The facade of the house facing the street was preserved and restored by adding only a minimal, black steel dormer window belying the more substantial alterations which open onto the private rear yard.

Described as "a subtle black framed addition", the addition contains an oak lined living space that is tucked under the thatched roof.

The new addition opens onto a sunken timber terrace while large picture windows that are cut into the historic brick volume in areas which had been damaged from the previous additions. 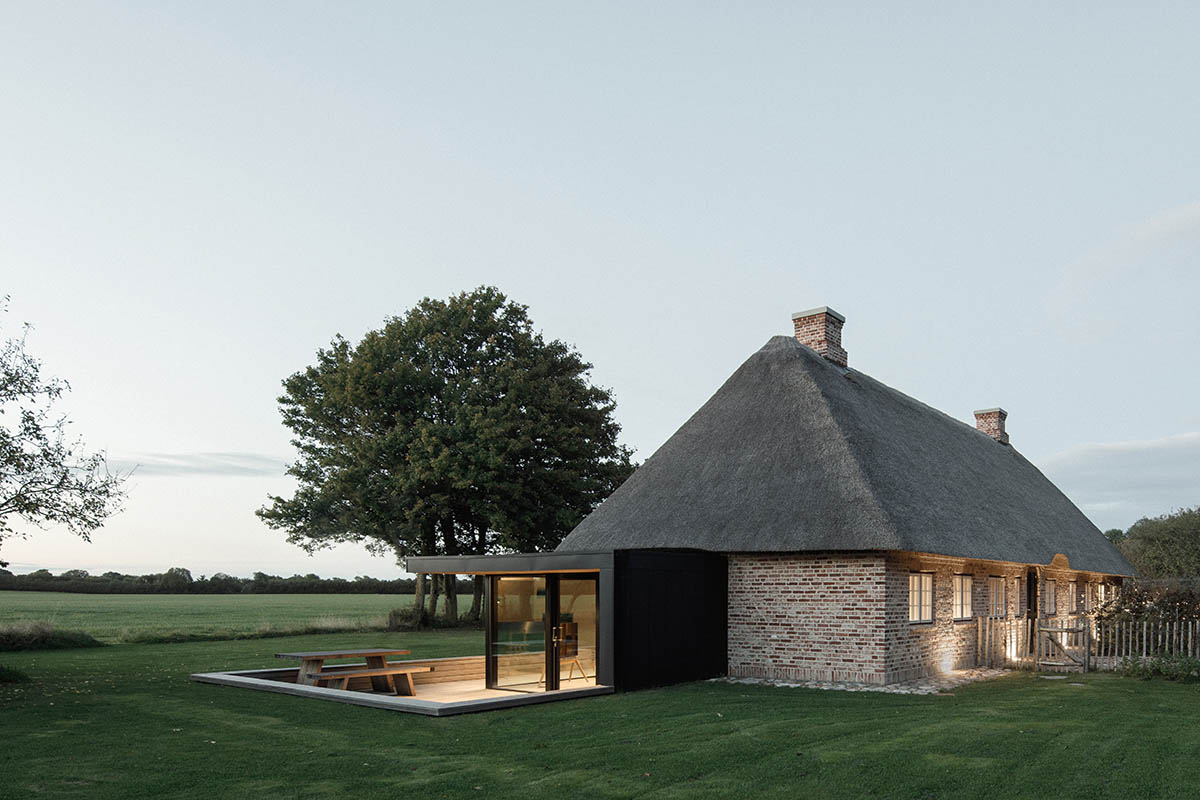 The architects opened up the centre of the house, which once comprised a maze of 14 small rooms was opened up. In the current condition, the interiors create a one large and airy kitchen and dining space with a high, chapel like ceiling.

A 6-metre-long concrete plinth standing at the centre of the room which doubles as an island bench and dining table, had to be lowered into the house by a crane while the roof was being reconstructed. 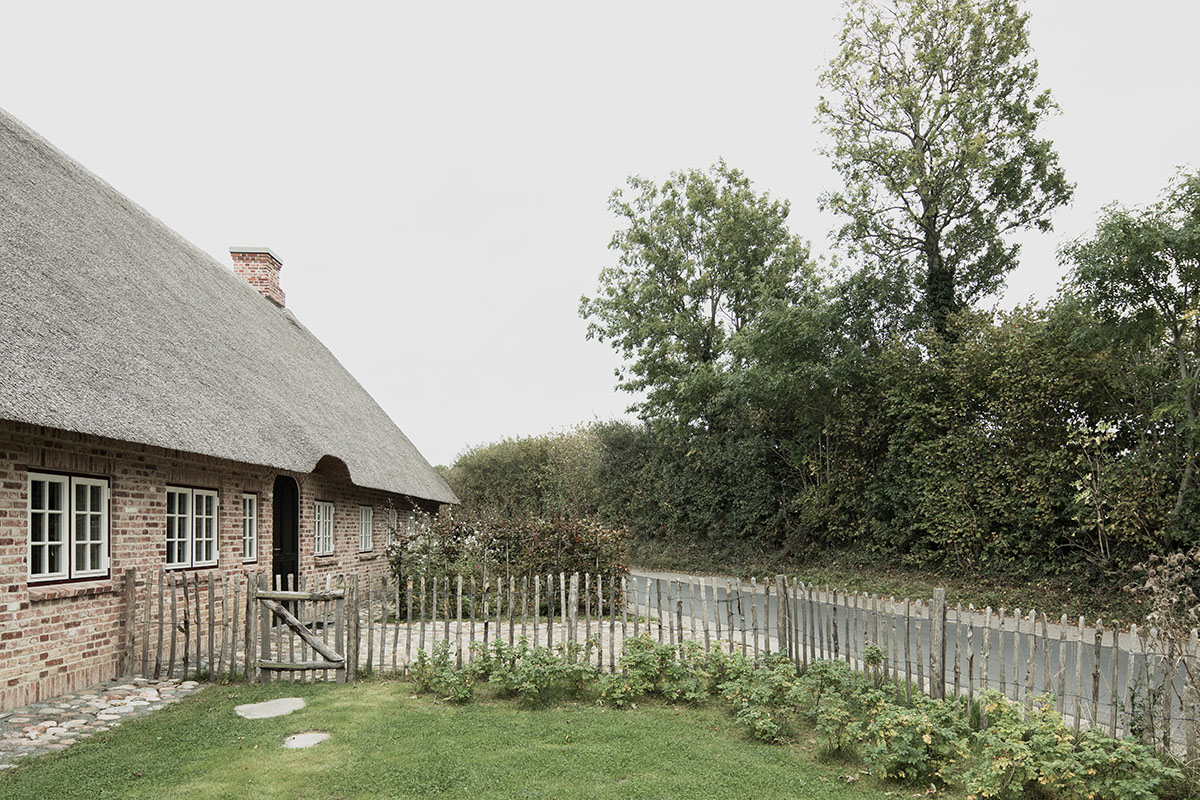 In the outer skin in which tells more about the past of the cottage, the walls of the house are finished with a textured, chamois plaster while joinery, doors and furniture are custom made from German oak to match the floorboards. 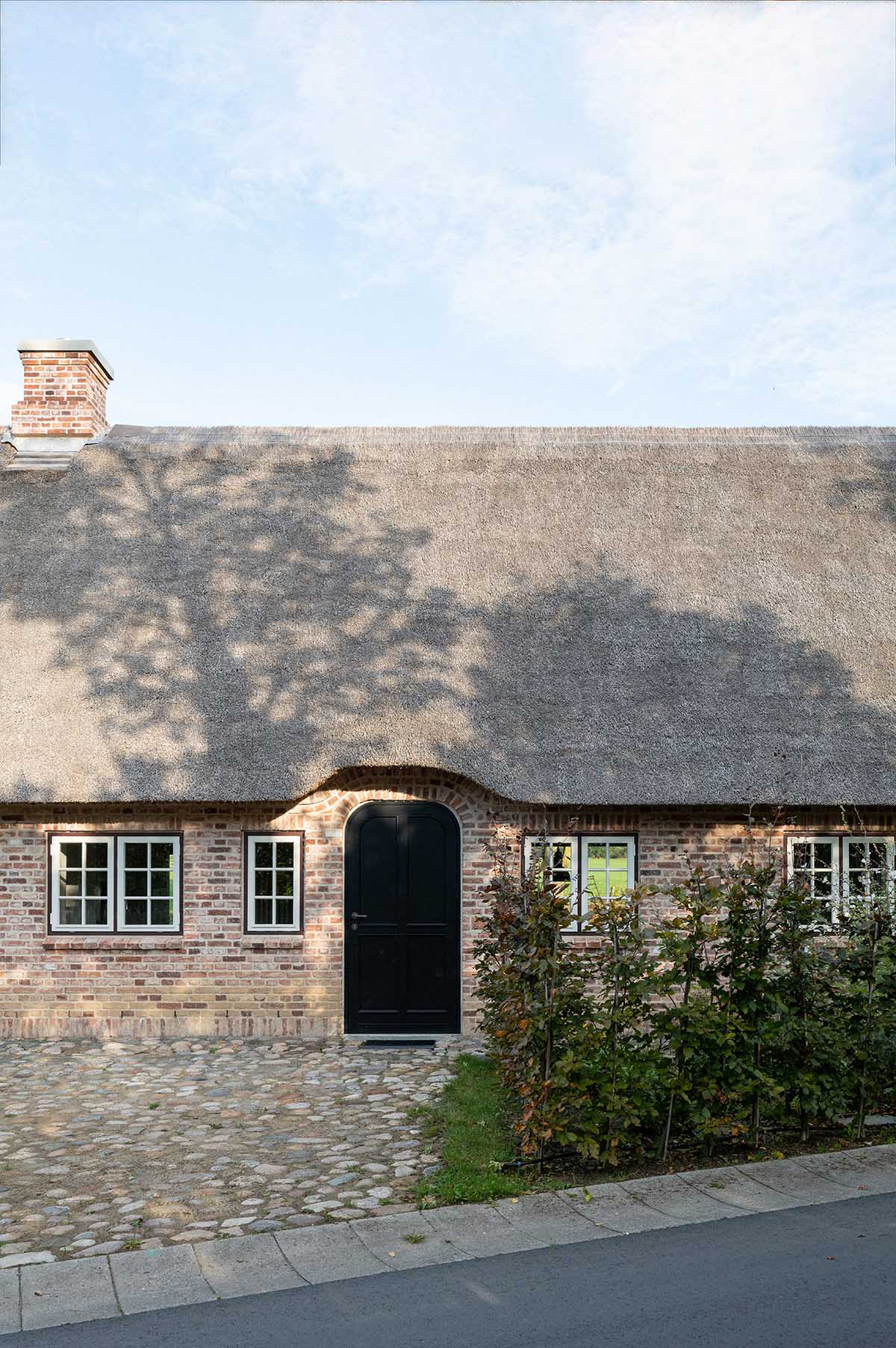 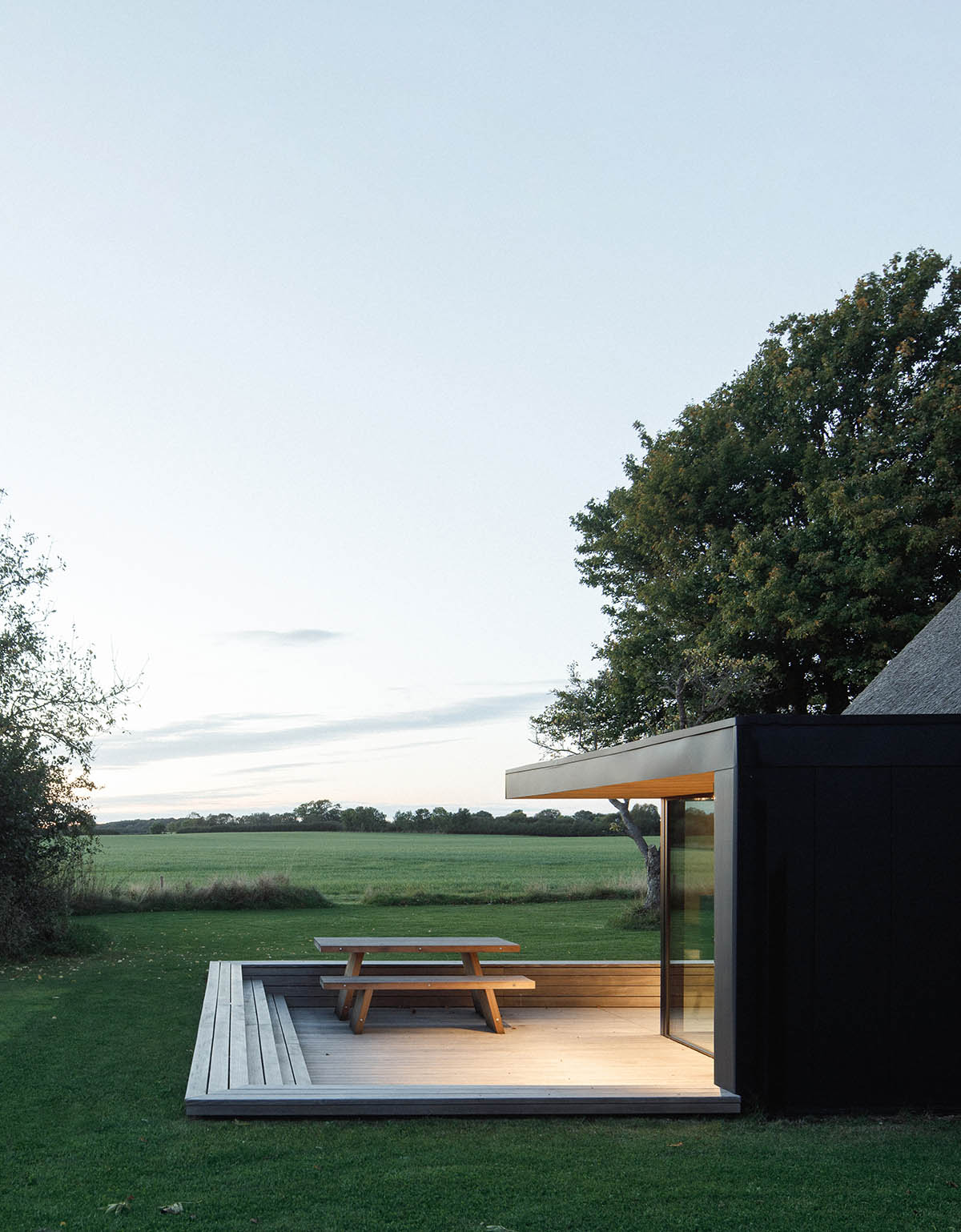 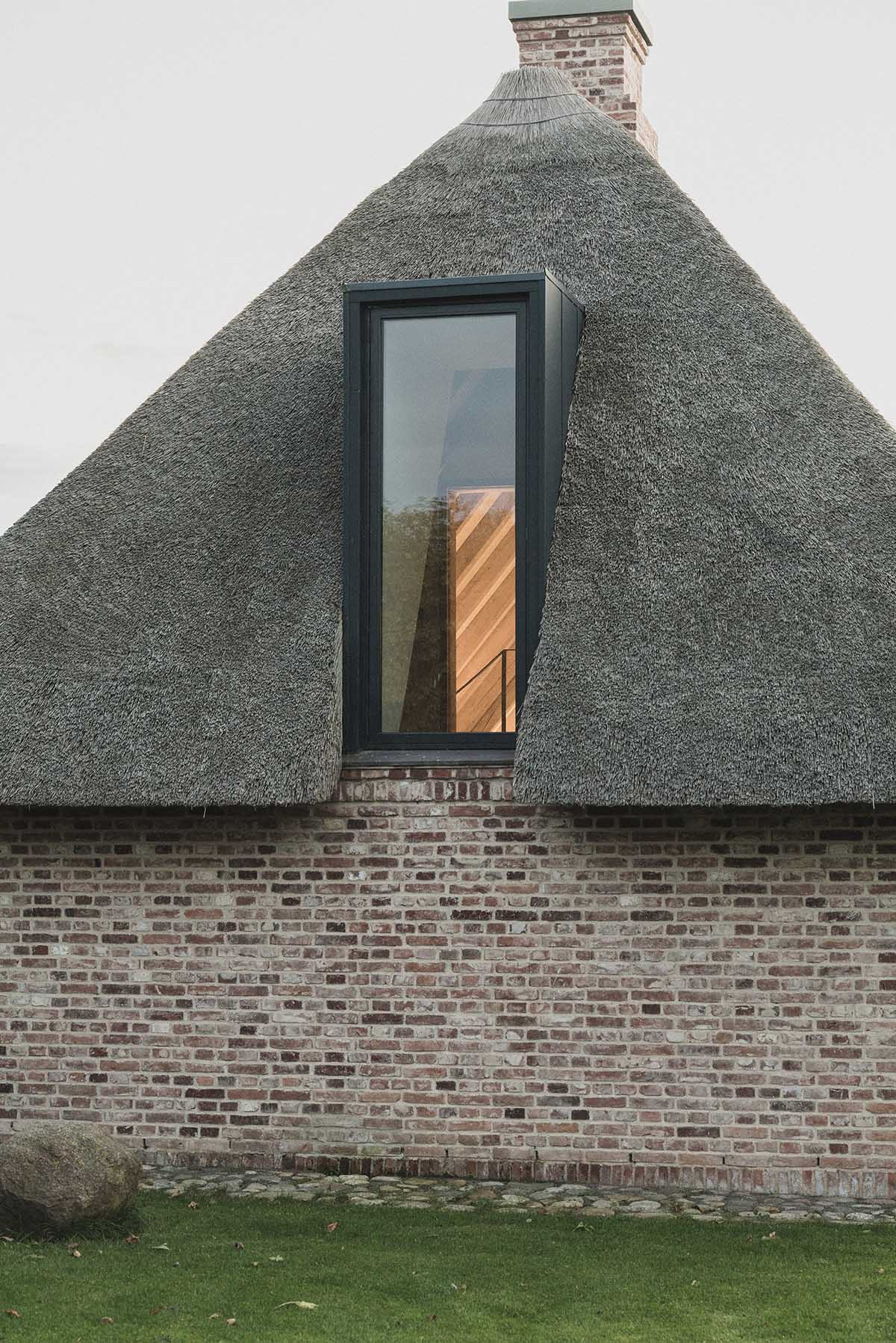 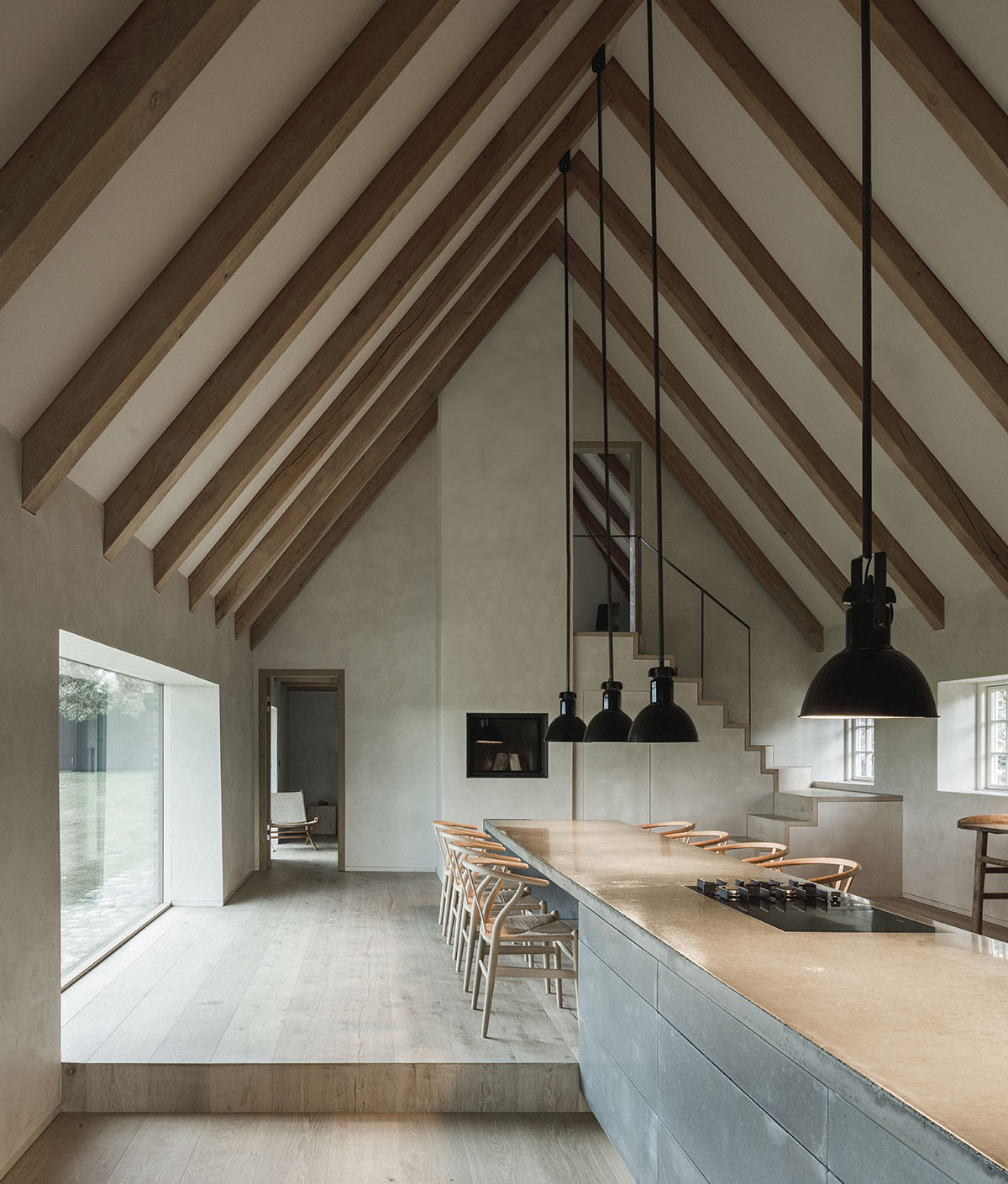 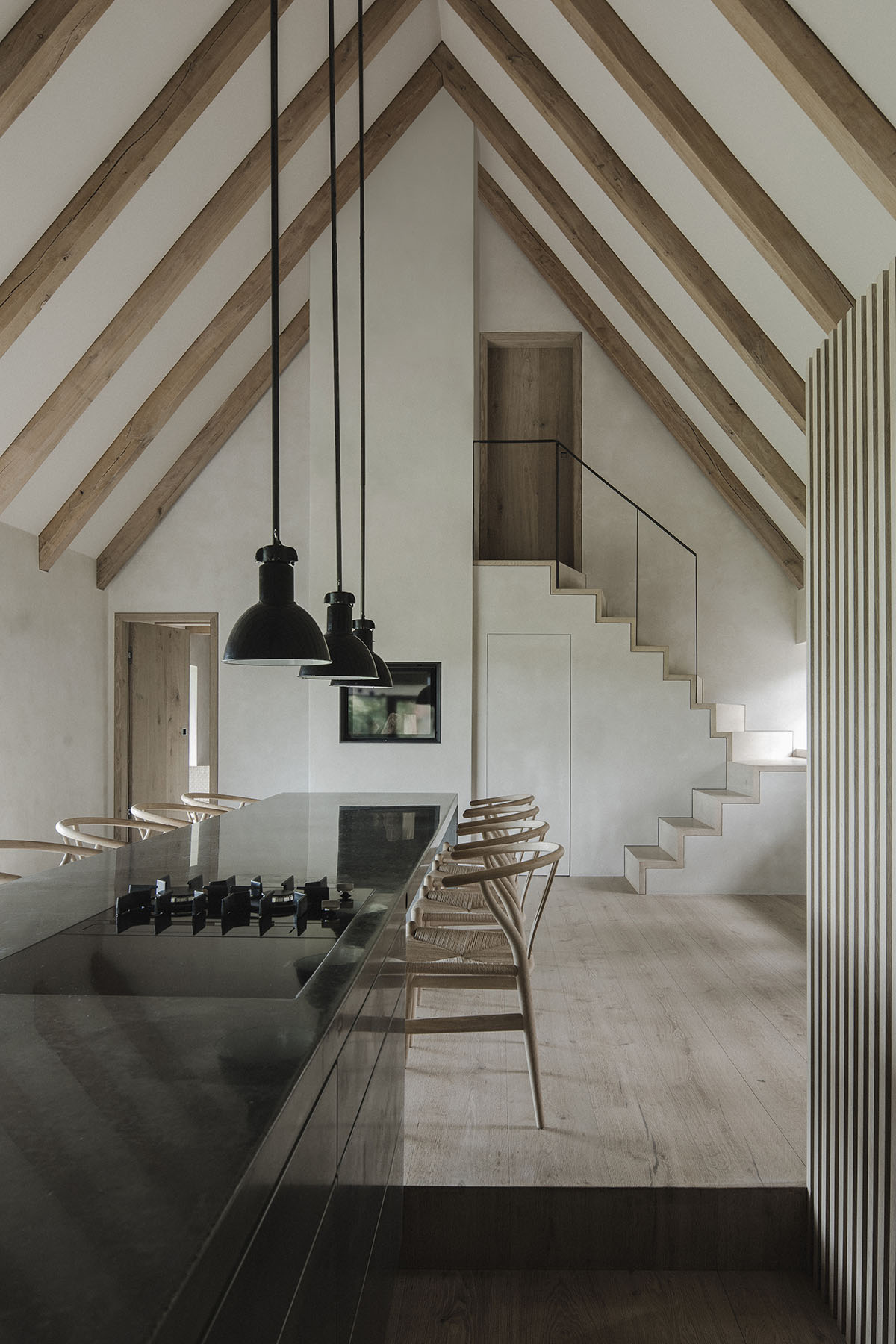 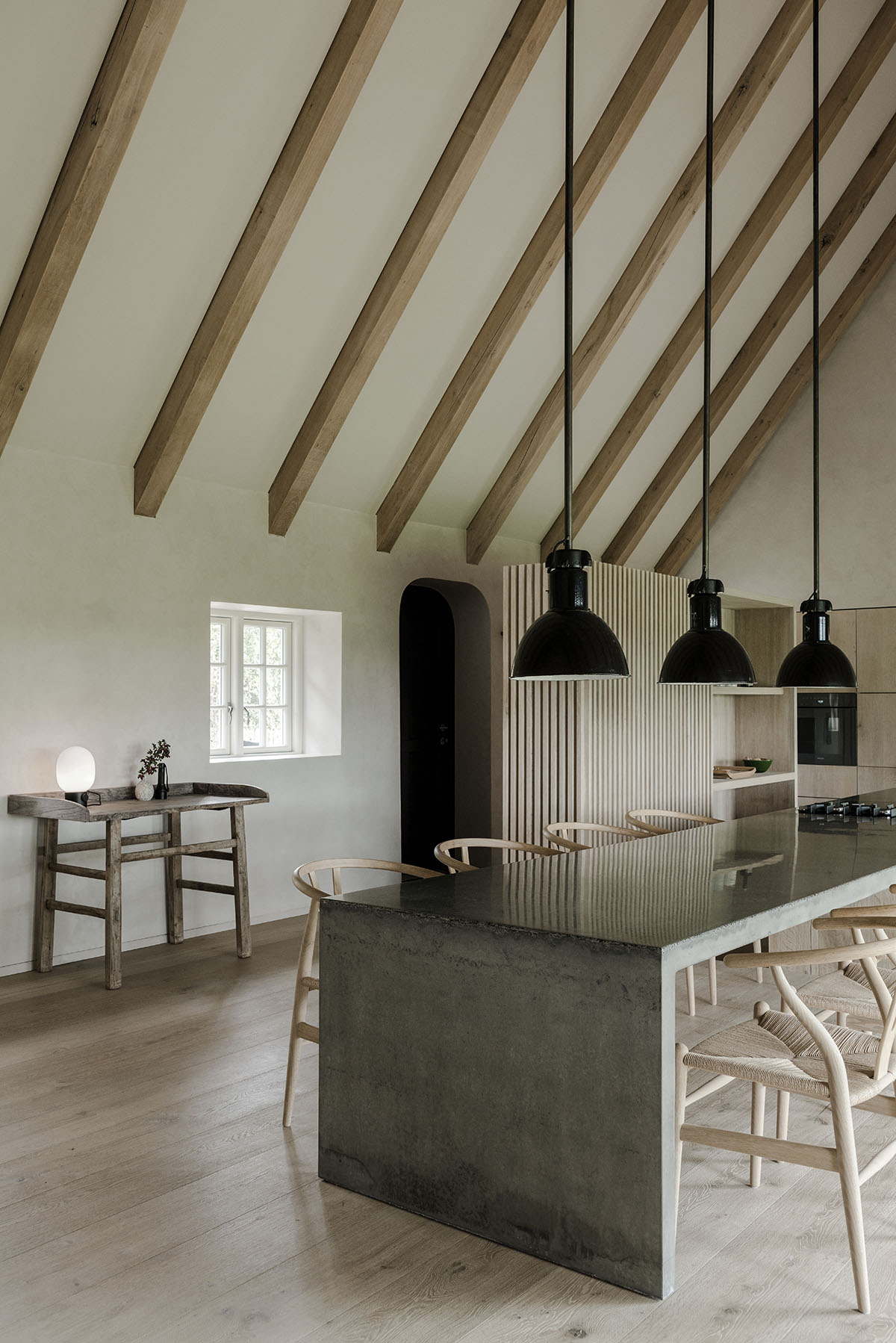 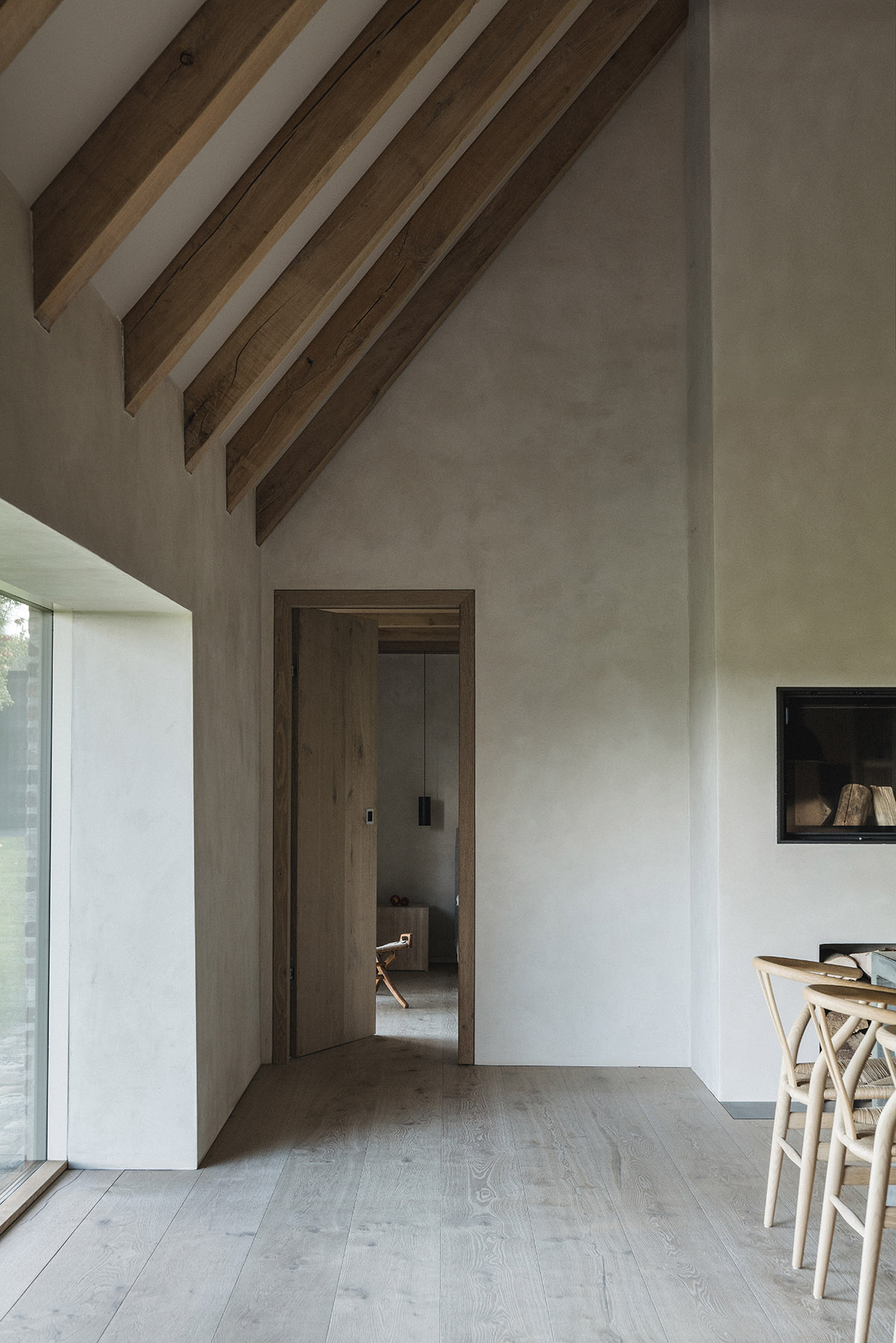 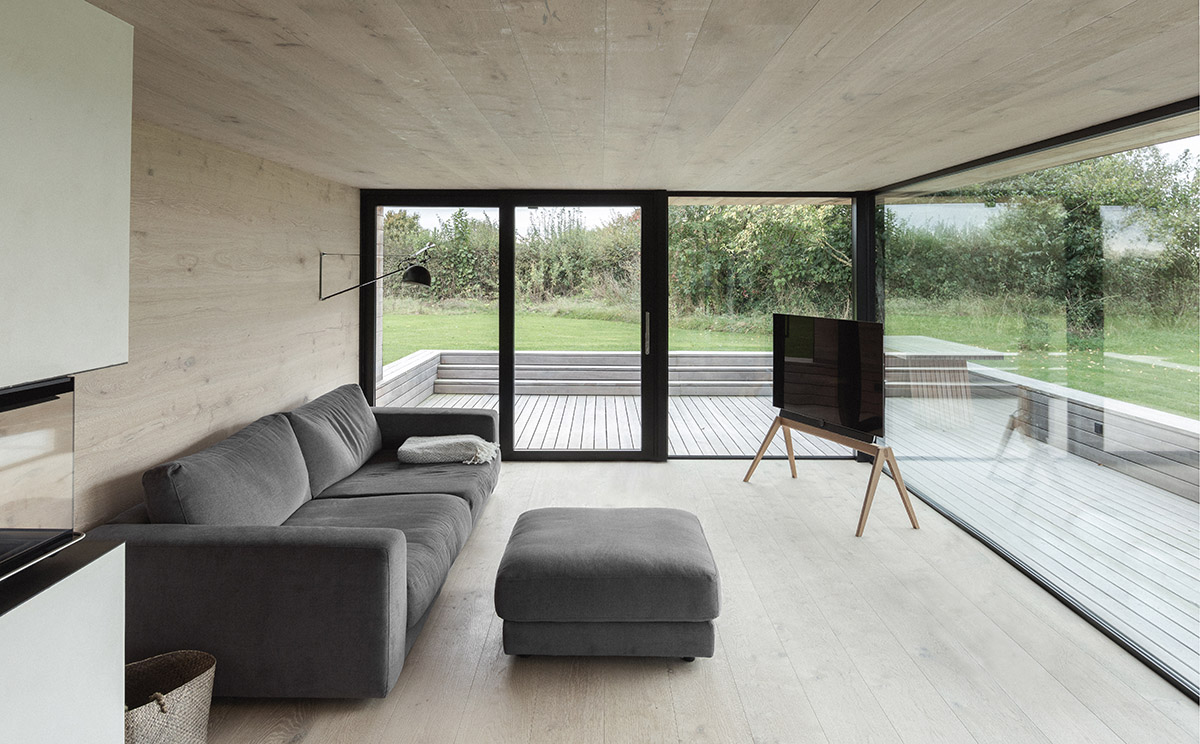 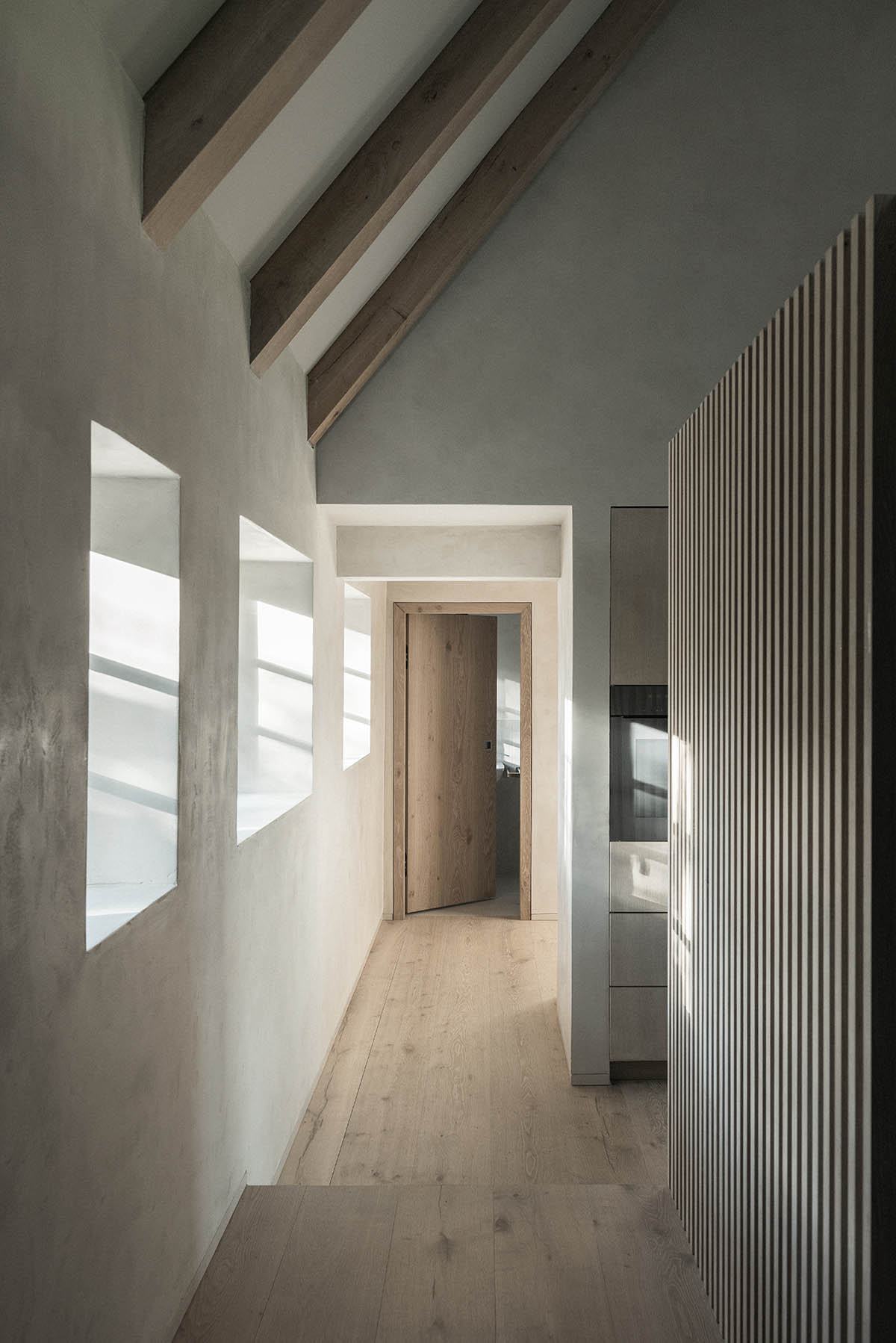 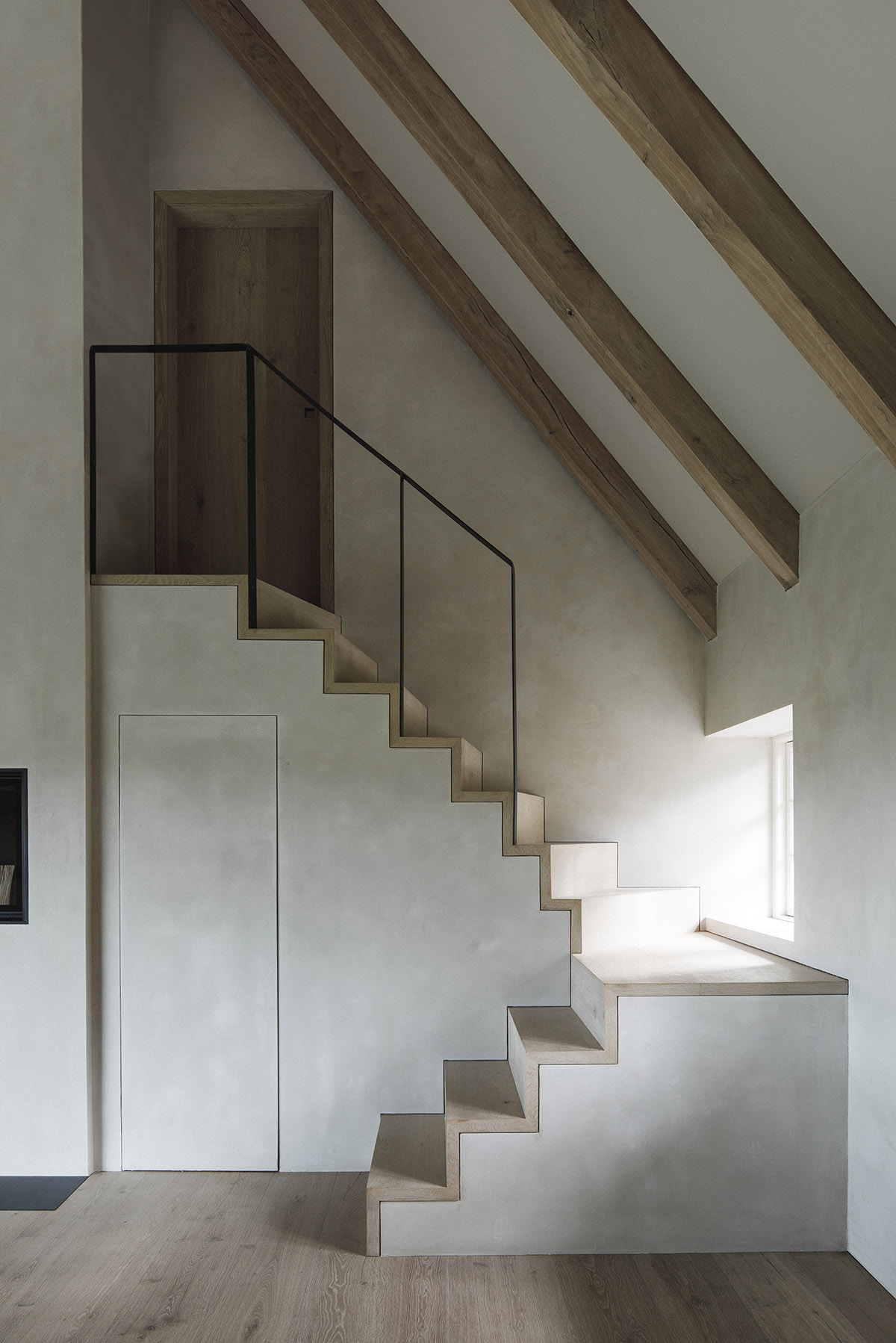 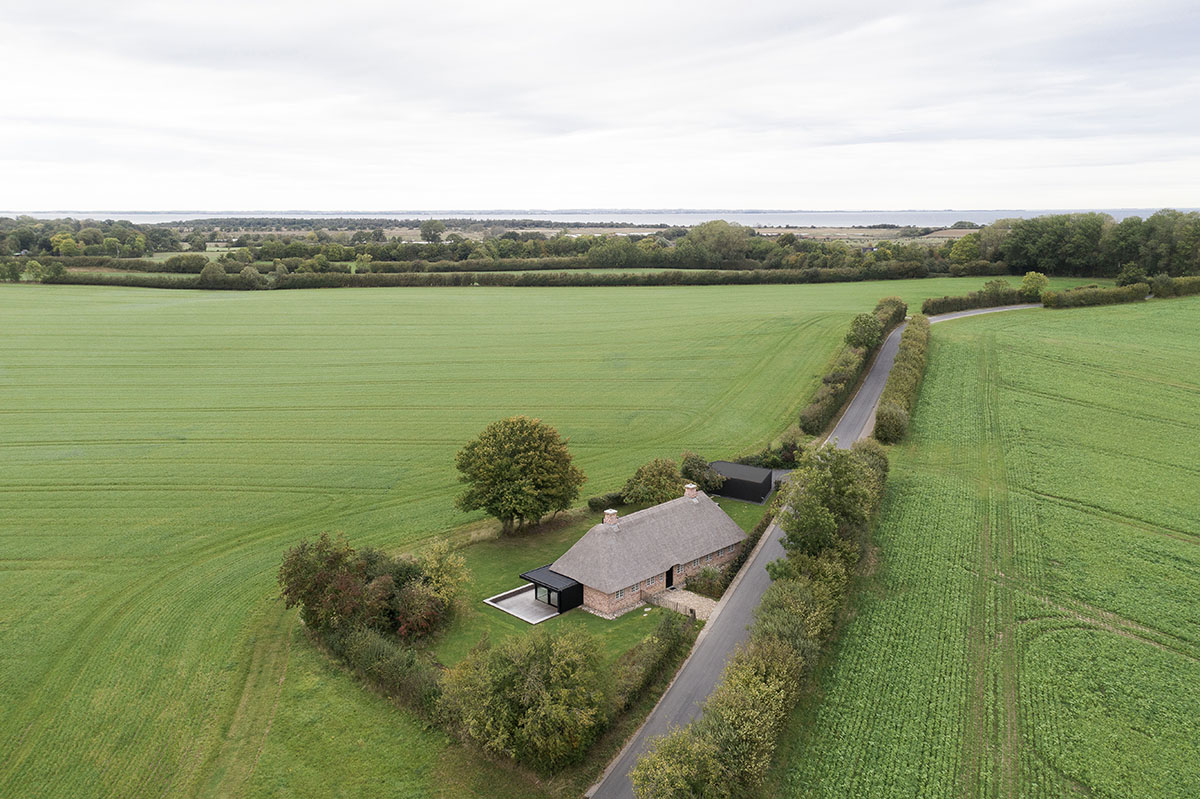 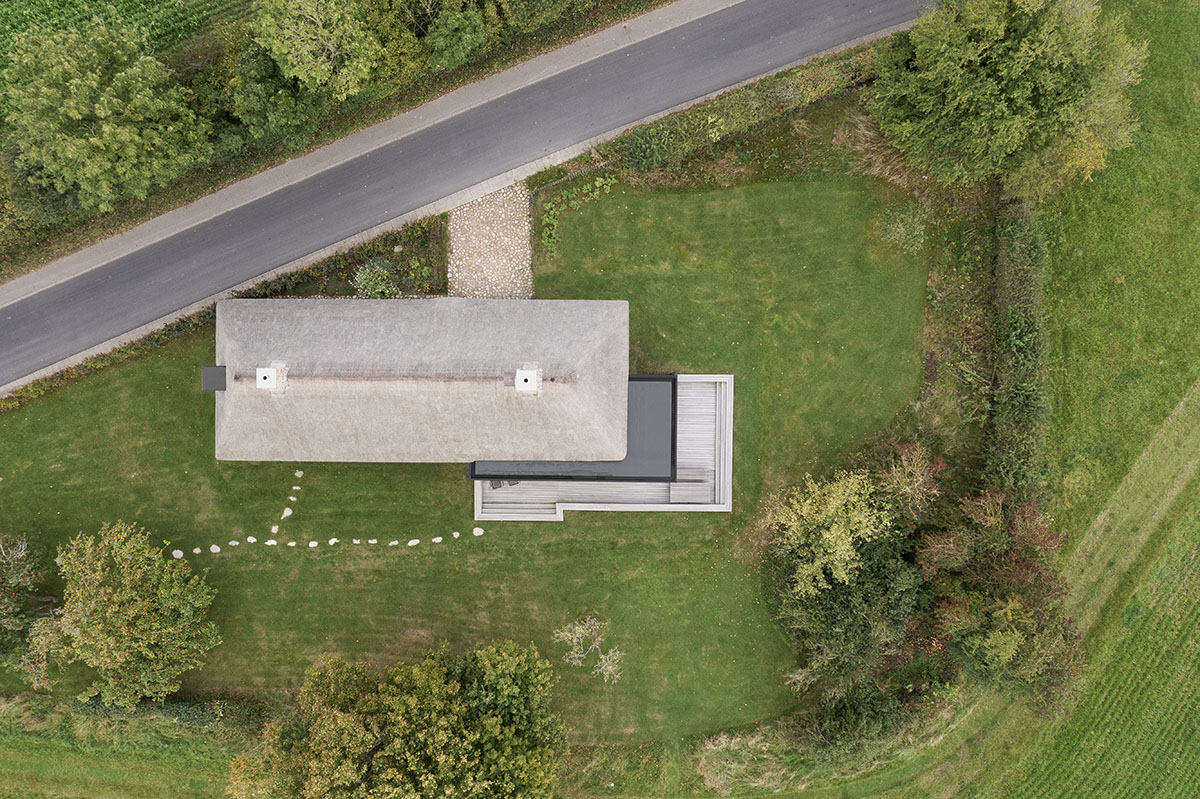 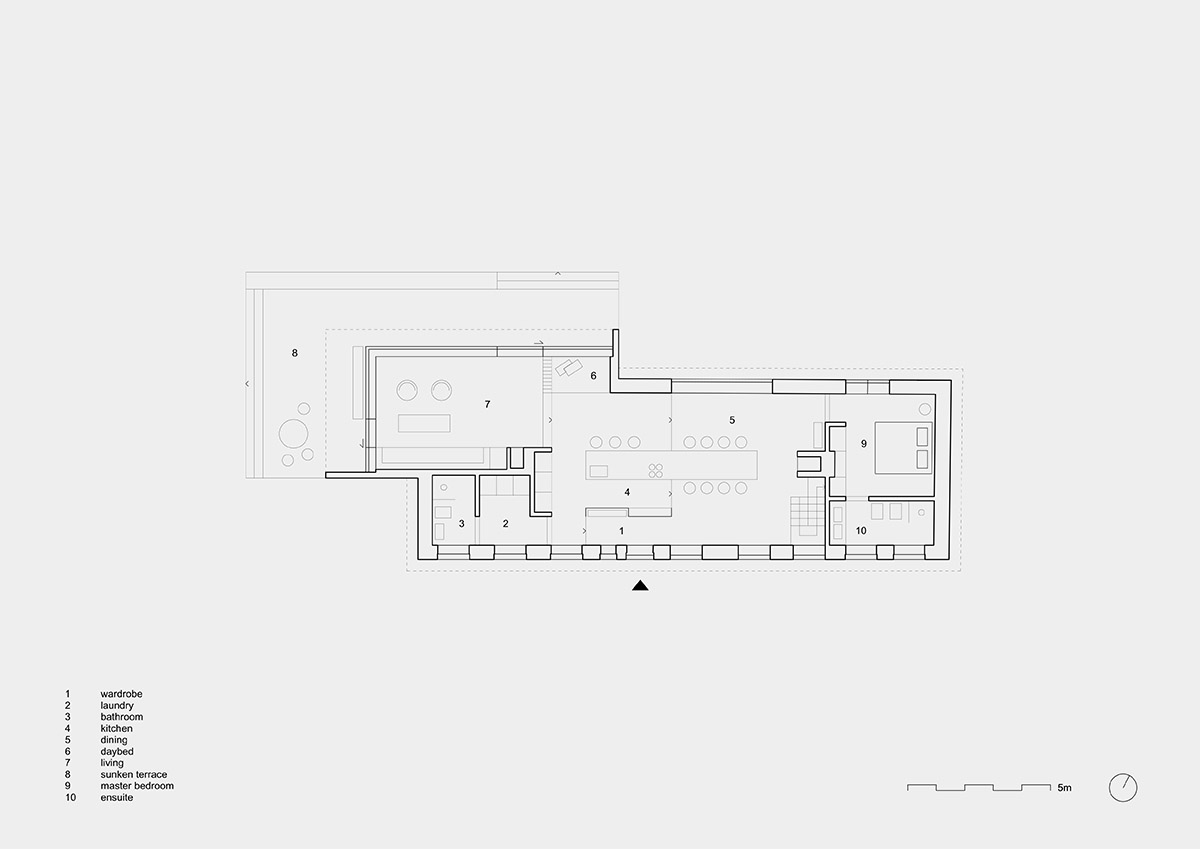 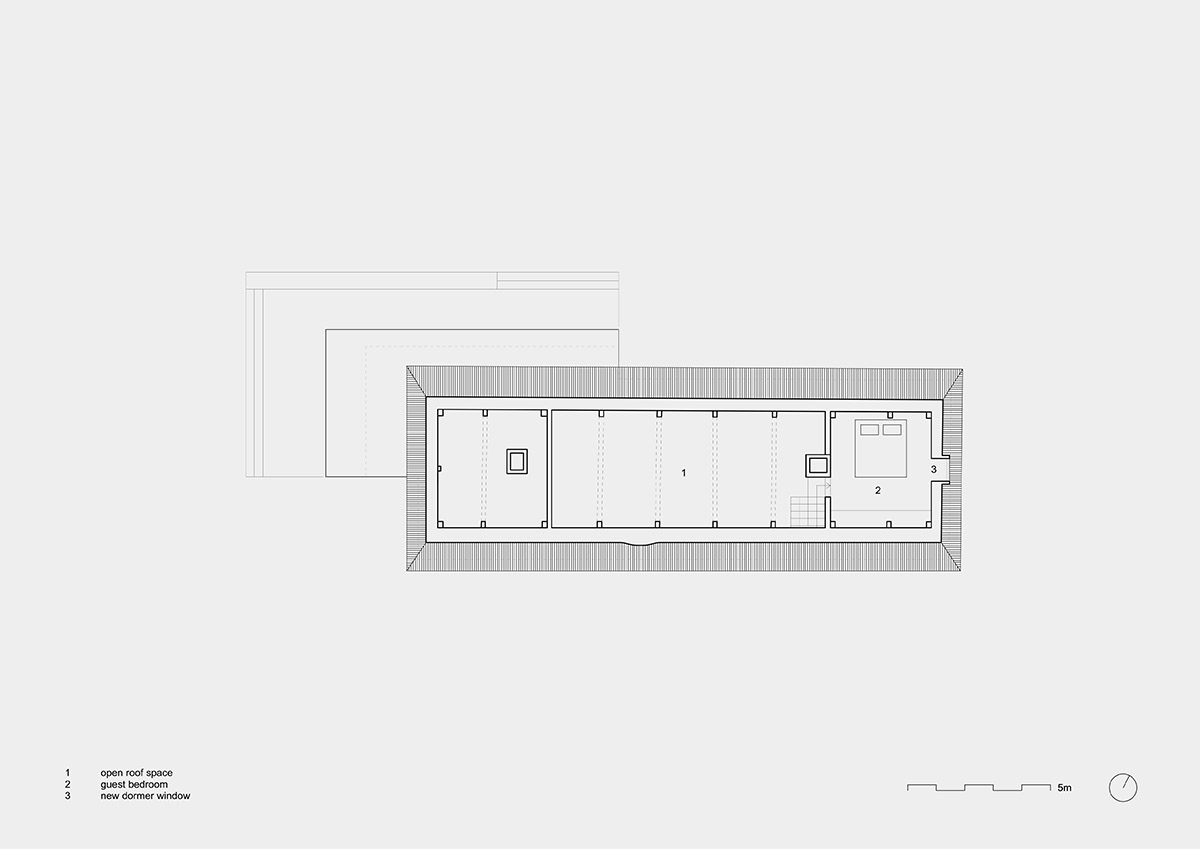 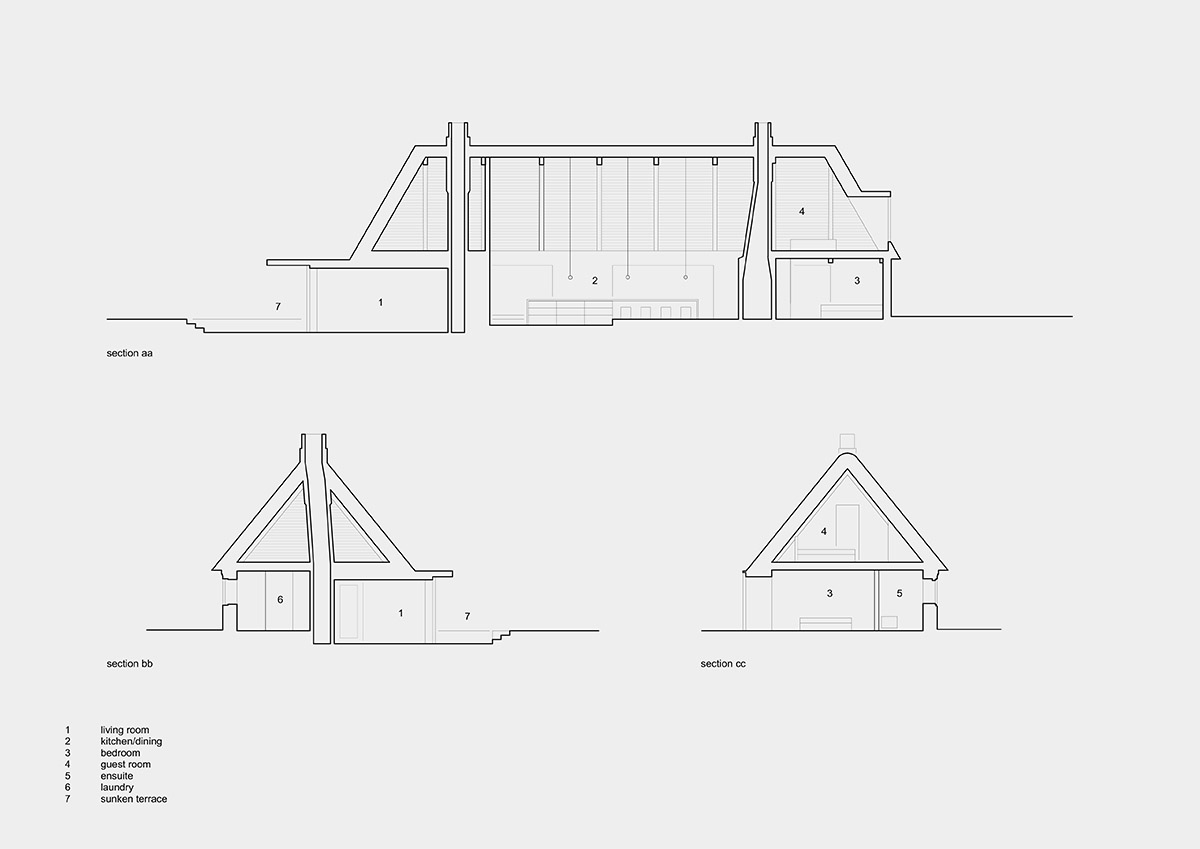 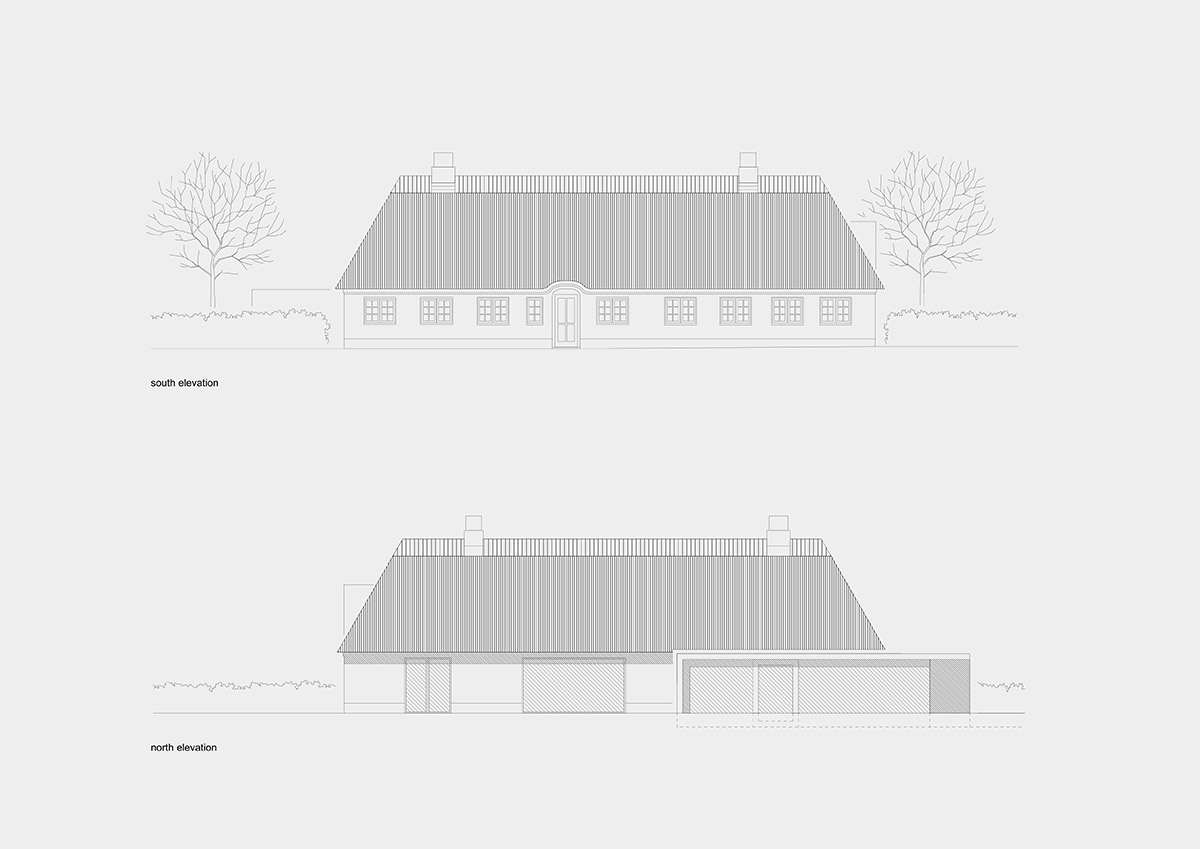 According to Jansen and Belcher, the renovation of the house meets German sustainability standards; it is highly insulated, features under floor heating and custom triple glazed windows.

The owners of the cottage now use the cottage as a weekend retreat, but in future they plan to spend their retirement years in this house.