Ukraine's modern heritage is being exposed to "the barbaric destruction", says Docomomo 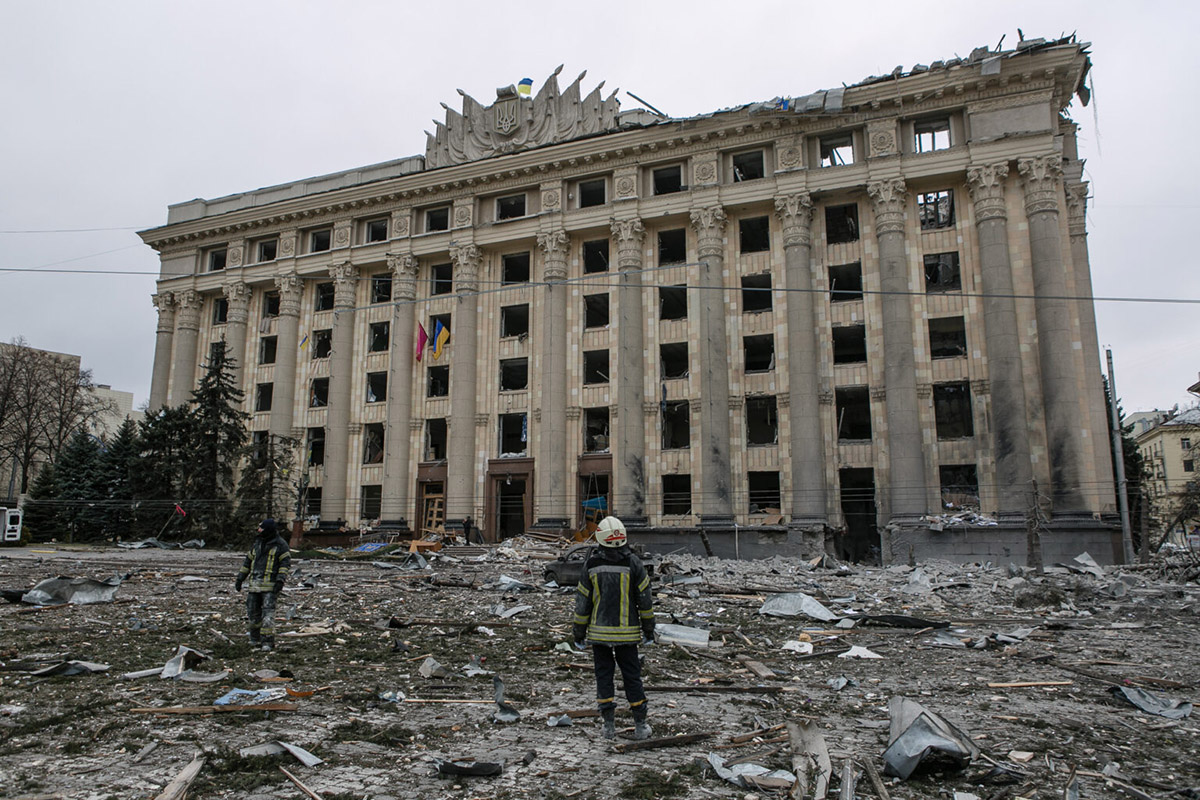 On the 34th day of Russia's invasion of Ukraine, the war continues to result with losses as a result of attacks of Russian army and the destruction of modern architectural structures one by one.

At the behest of Russian President Vladimir Vladimirovich Putin, the war began on February 24, 2022 and so far 1,119 civilians have been killed and 1,790 injured, according to a report by Reuters. In addition, more than 3.5 million people have fled from Ukraine to neighboring European countries.

The United Nations expects that these numbers can reach to 4 million refugees in the coming days and weeks, and this is considered to be "an incredibly fast and largest exodus of people since the Balkan wars," according to the UN refugee chief Filippo Grandi.

A website post written by an anonymous person and shared by the non-profit conservation group Docomomo from the city of Kharkiv of Ukraine, underlined that the destruction has reached "a barbaric destruction of architectural heritage" beyond being "only a humanitarian catastrophe, and a war crime."

“My hometown Kharkiv, which for many years has been the subject of my scientific research, excursions and educational projects, is surrounded by the Russian army and every day is under inhuman and massive strikes by weapons prohibited by all conventions such as explosive bombs and cluster bombs," stated the Docomomo article.

"Russia is precisely destroying civilian infrastructure and objects, residential areas, shelling crowded places, not allowing the Red Cross or food provision to the city. This is a genocide of a city of 2 million people, an intellectual, industrial and cultural center of Ukraine. Kharkiv was called the capital of Ukrainian constructivism."

"It is here the best objects of interwar modernism. For example, the famous Derzhprom (or Gosprom). But, in addition to this, the city has many heritage objects of local and national significance from other historical periods."

"For example, yesterday a monument of neoclassicism, the Assumption Cathedral, and the object of 1914 – the Palace of Labor (former House of the Rossiya Insurance Company), were vastly bombed." 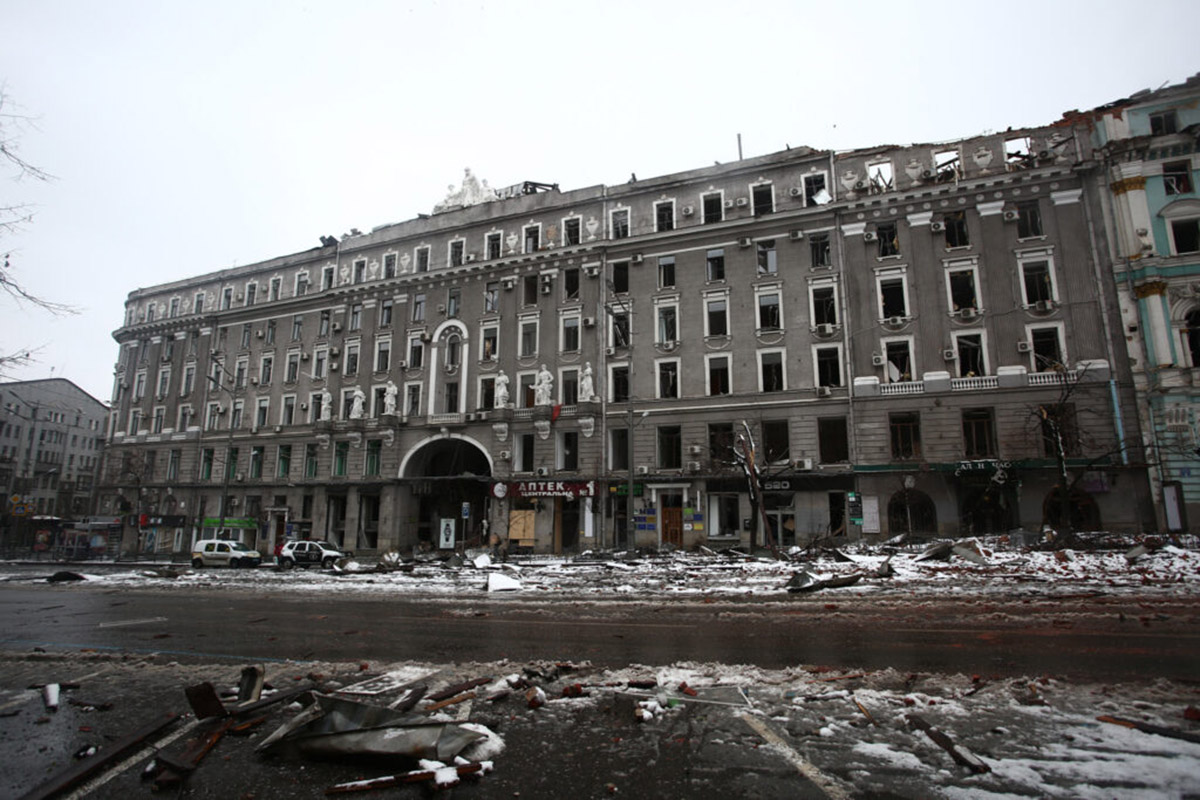 Image: The Palace of Labor in Kharkiv. Creator: admire_photo via Docomomo Ukraine

"At the moment, at least 30 listed heritage sites have been destroyed or seriously damaged. Others remain at risk as Russia does not stop strikes, even during  negotiation procedures."

"This is not only a humanitarian catastrophe, not only a war crime, but also the barbaric destruction of architectural heritage of Ukrainian cities, our memory and culture," stated a member of Docomomo.

Important monuments, museums, landmark buildings and cultural sites, such as the Kuindzhi Art Museum in Mariupol, a Gothic revival library in Chernihiv, the Babyn Yar Holocaust memorial complex in Kyiv, the Soviet-era Slovo (Word) apartment block in Kharkiv and the local history museum of Ivankiv have already been destroyed because of the war, The Art Newspaper reported.

The United Nations Educational, Scientific and Cultural Organization (UNESCO) has published a statement on 25 March and said that "UNESCO is gravely concerned with the damages incurred by the city of Kharkiv, UNESCO Creative City for Music, and the historic centre of Chernihiv, on Ukraine’s World Heritage Tentative List."

When the attacks began on 24 February, UNESCO released a statement on 3 March and "demanded the immediate cessation of attacks on civilian facilities, such as schools, universities, memorial sites, cultural and communication infrastructures, and deplores civilian casualties, including students, teachers, artists, scientists and journalists."

"These include women and children, girls especially, disproportionately impacted by the conflict and displacement."

The organization added that "In the field of culture, UNESCO underlines the obligations of international humanitarian law, notably the 1954 Hague Convention for the Protection of Cultural Property in the Event of Armed Conflict and its two (1954 and 1999) Protocols, to refrain from inflicting damage to cultural property, and condemns all attacks and damage to cultural heritage in all its forms in Ukraine. UNESCO calls also for the full implementation of UN Security Council Resolution 2347."

"UNESCO deeply regrets reports of damage to the works of the celebrated Ukrainian artist, Maria Primachenko, with whose anniversary UNESCO was associated in 2009," UNESCO continued.

"UNESCO in close coordination with the Ukrainian authorities"

"In order to prevent attacks, UNESCO, in close coordination with the Ukrainian authorities, is working to mark as quickly as possible key historic monuments and sites across Ukraine with the distinctive emblem of the 1954 Hague Convention, an internationally recognised signal for the protection of cultural heritage in the event of armed conflict," stated UNESCO.

"In addition, UNESCO has approached the Ukrainian authorities with a view to organising a meeting with museum directors across the country to help them respond to urgent needs for safeguarding museum collections and cultural property. In cooperation with UNITAR/UNOSAT, UNESCO will be monitoring the damages incurred by cultural sites through satellite imagery analysis."

Recently, a group of volunteers from Western Ukraine have created an interactive website showing the demolished buildings and cities in Ukraine, including the names of cities and pictures and the dates they were demolished.

Ukrainian architects and designers have raised their voices and shared their insights with World Architecture Community.