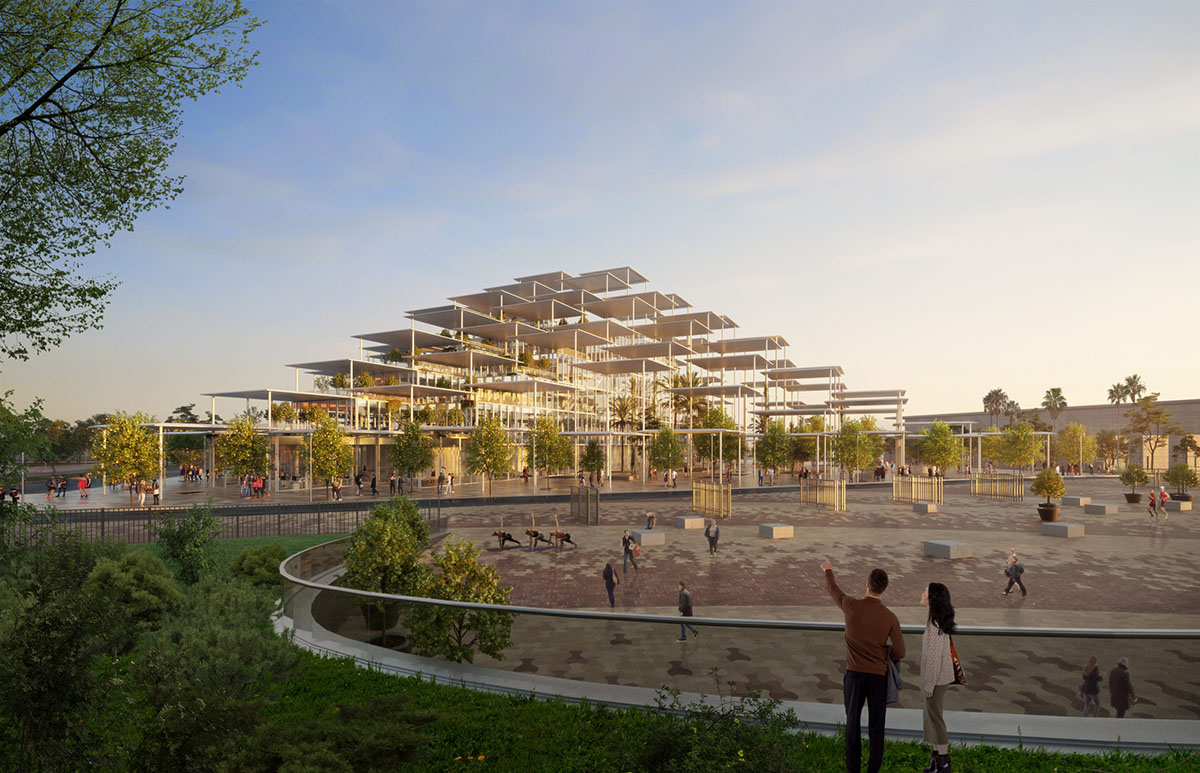 Designed for the European Commission, the new research center is located at the former Sevilla Expo ́92 site in Isla de la Cartuja and aims to achieve the city of Sevilla’s goal to become a global benchmark for sustainability by 2025 and the local vision of the eCitySevilla project - which intends to decarbonize and transition Isla de la Cartuja to 100 per cent renewable energy sources.

BIG's new design scheme also aims to achieve the vision of the New Bauhaus initiative with its sustainability principles. BIG's founder Bjarke Ingels is among the "distinguished thinkers and practitioners" for the New European Bauhaus' high-level roundtable. 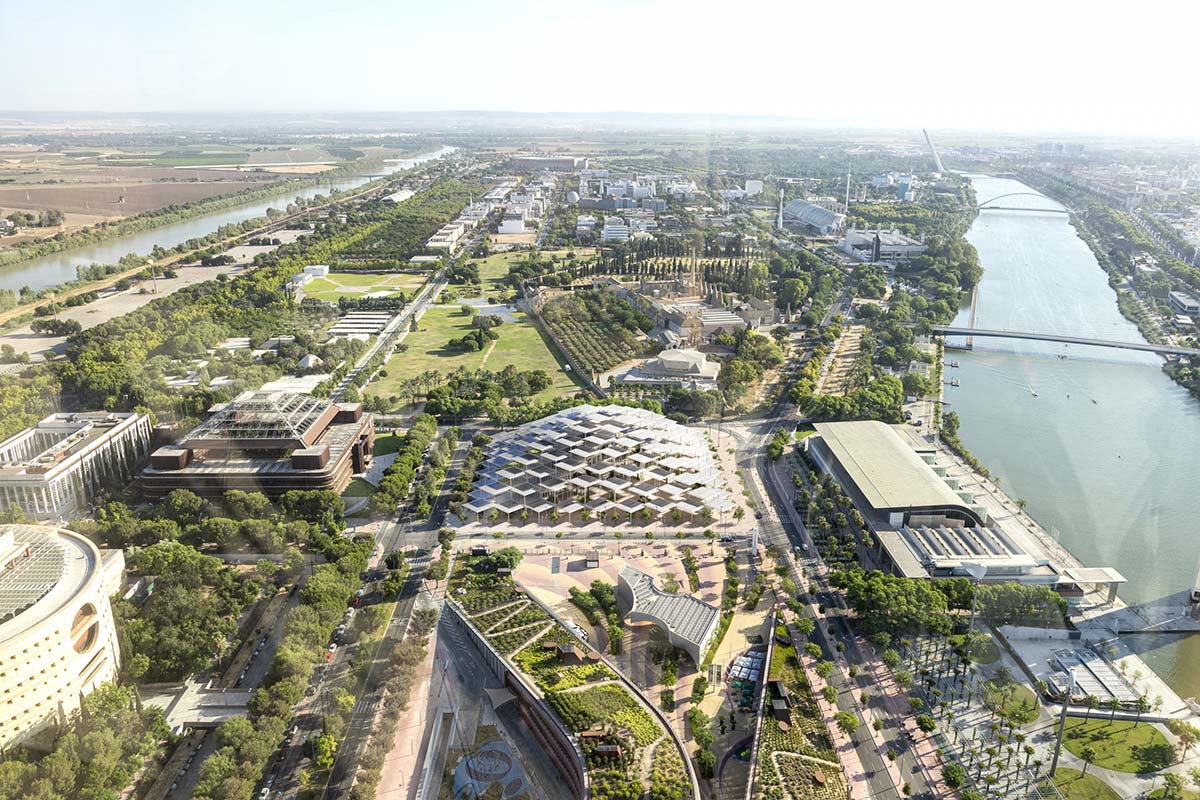 Solar Cupola will incorporate 12 research units and support public and private outdoor spaces. The international design competition kicked off in 2021 and 66 offices competed for the project.

JRC Sevilla is expected to break ground in 2024. 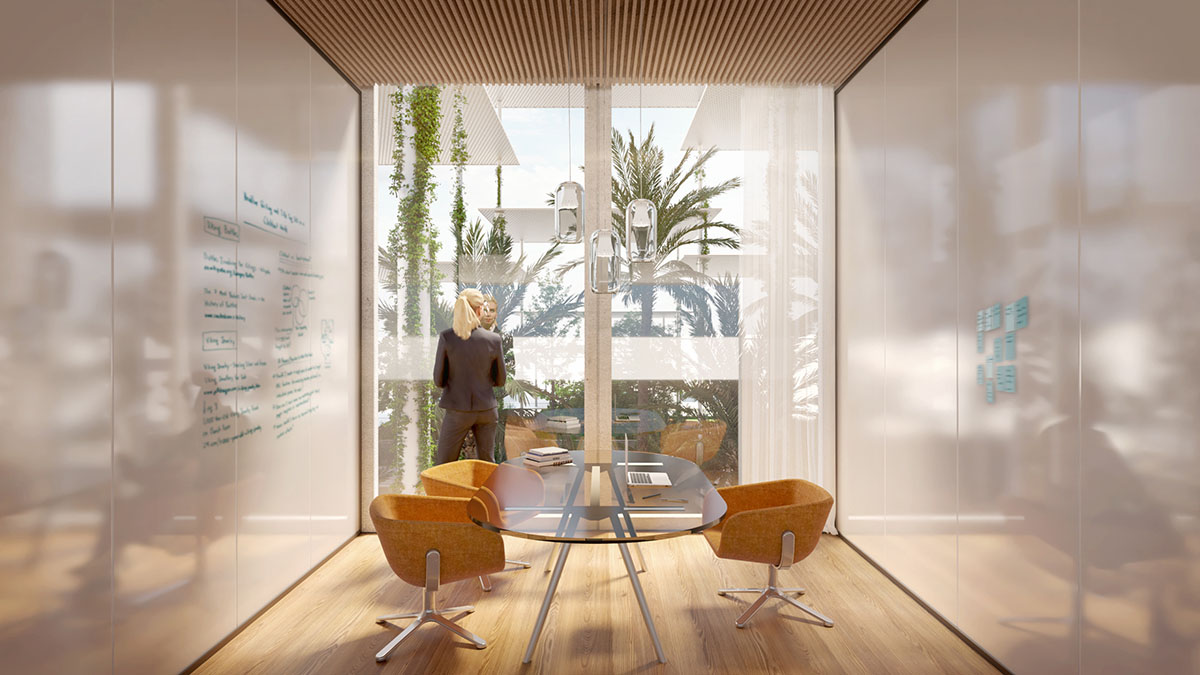 "We are extremely excited to announce this incredible design for the new JRC site in Seville as we launch the New European Bauhaus Lab," said Stephen Quest, JRC Director General.

"The “NEB Lab” aims to create enabling conditions for the green transition and drive tangible transformation on the ground. The new building for the JRC Seville site is the ideal opportunity for us to “walk the talk”."

"The future building will be one of the first examples of architecture entirely inspired by the values of the New European Bauhaus, while achieving maximum energy efficiency and life cycle sustainability, an issue of outmost importance today," added Quest. 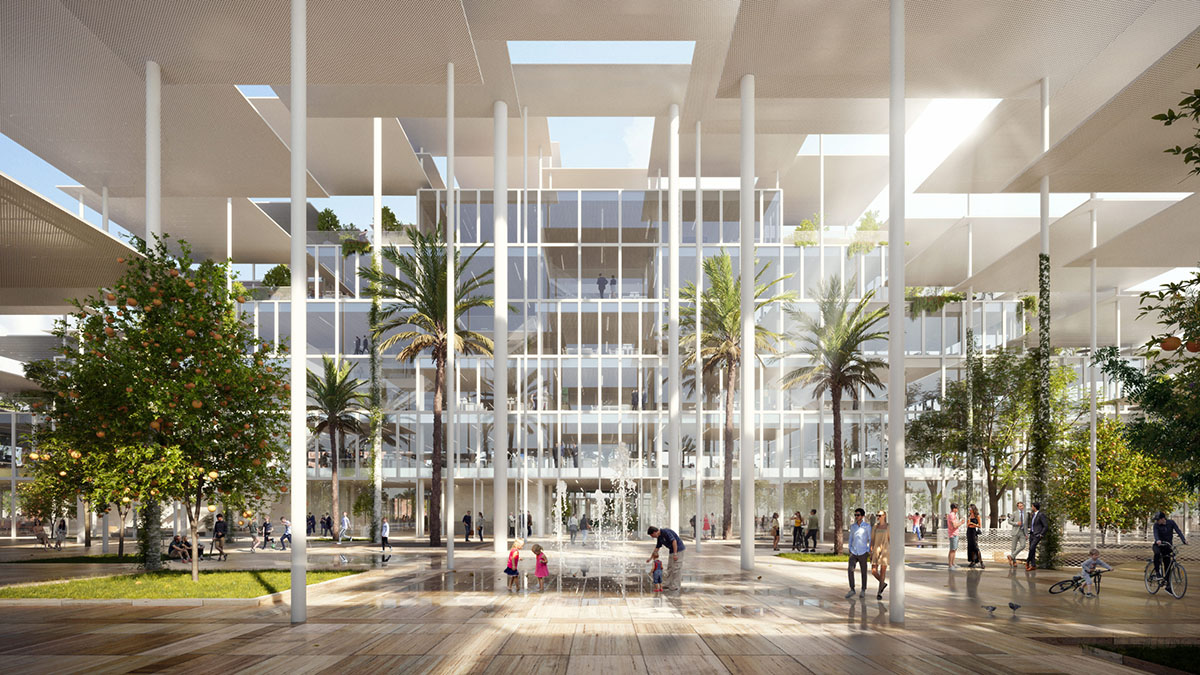 BIG is inspired by the shaded plazas and streets of Seville and covers the entire project site with "a cloud of solar canopies" sheltering the plaza, garden, and research building underneath, referencing to the typical pergolas of Seville.

As BIG emphasized, the canopies are made up of square lightweight PV sheets and supported by a forest of thin columns.

Creating a distinctive roofscape, the roofscape cascades down from the center of the site to a human scale height at its periphery forming a variety of public spaces underneath it.

"With our design for the Joint Research Centre in Seville, more than anything, we have attempted to allow the sustainable performance of the building to drive an architectural aesthetic that not only makes the building perform better but also makes it more inhabitable and more beautiful - a new Andalusian environmental vernacular," said Bjarke Ingels.

"Having started my studies as an architect in Andalusia and later returning to ETSAB in Barcelona, to now having a 50-person BIG office in Barcelona, this project feels like coming full circle," Ingels added. 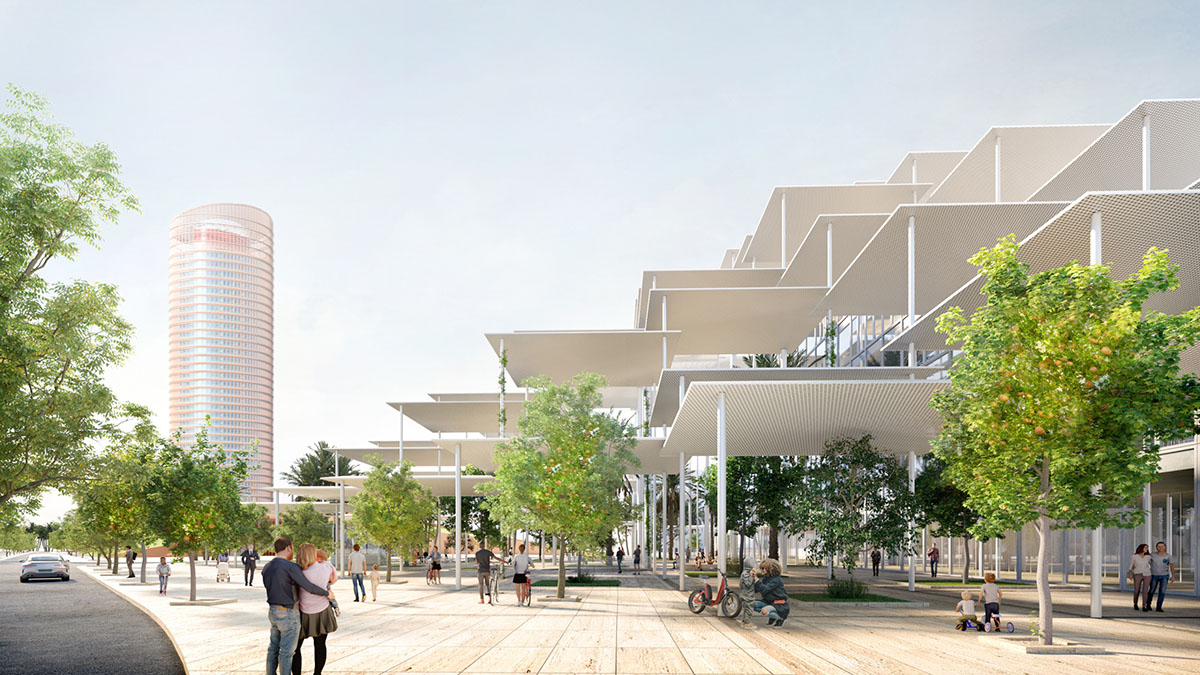 Underneath, the new Joint Research Centre building is placed diagonally across the site to connect the JRC directly to the "Jardin Americano" river-front and the Torre Sevilla market in a seamless continuous public space that is both plaza and promenade.

According to BIG, placing the building diagonally also creates a new public square on one side of the building and a private garden for the JRC community on the other. People can feel the permeability and form of the canopies when walking around under the canopies.

The floorplates of the research centre step back as the building ascends, creating a series of terraces, shaded outdoor spaces for breakouts, relaxation, and informal meetings with views of the city. 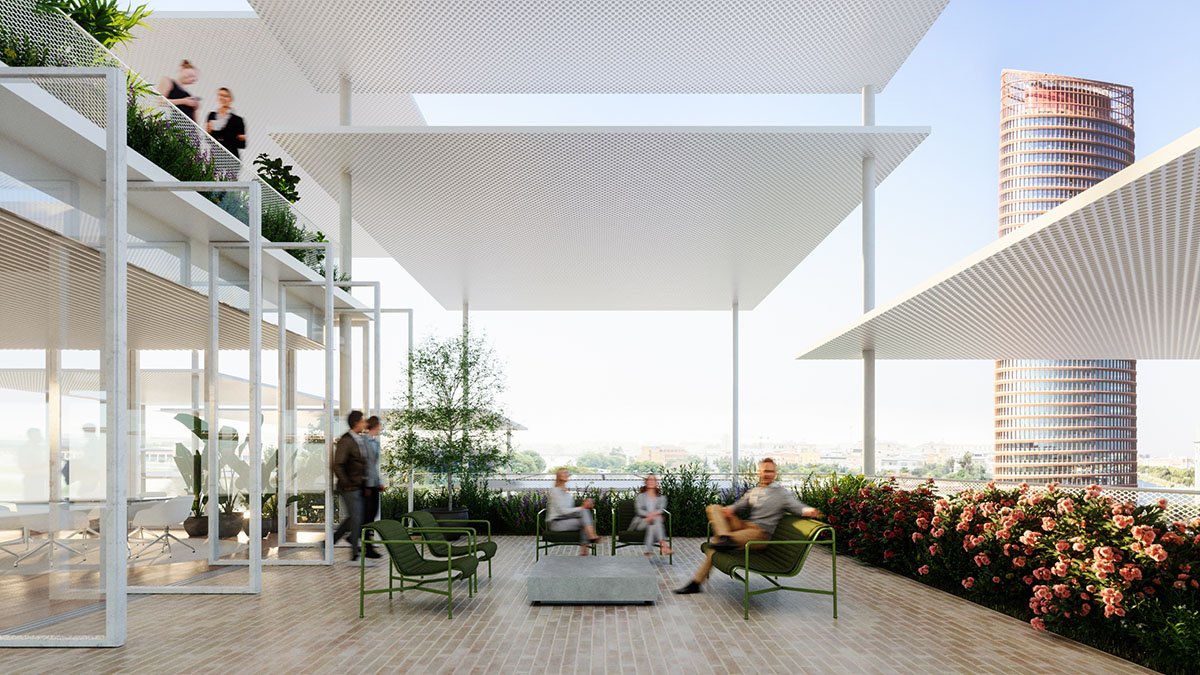 "When we visited the site in Seville last year and carefully reviewed JRC’s ambitious goals, we realized the potential to not only meet but exceed the requirements of the new JRC by creating a new breed of building – one that could become a beacon for sustainability, the future of public space and work environment - a single system tailored to Seville’s social and physical vernacular," said Joao Albuquerque, Partner, BIG Barcelona. 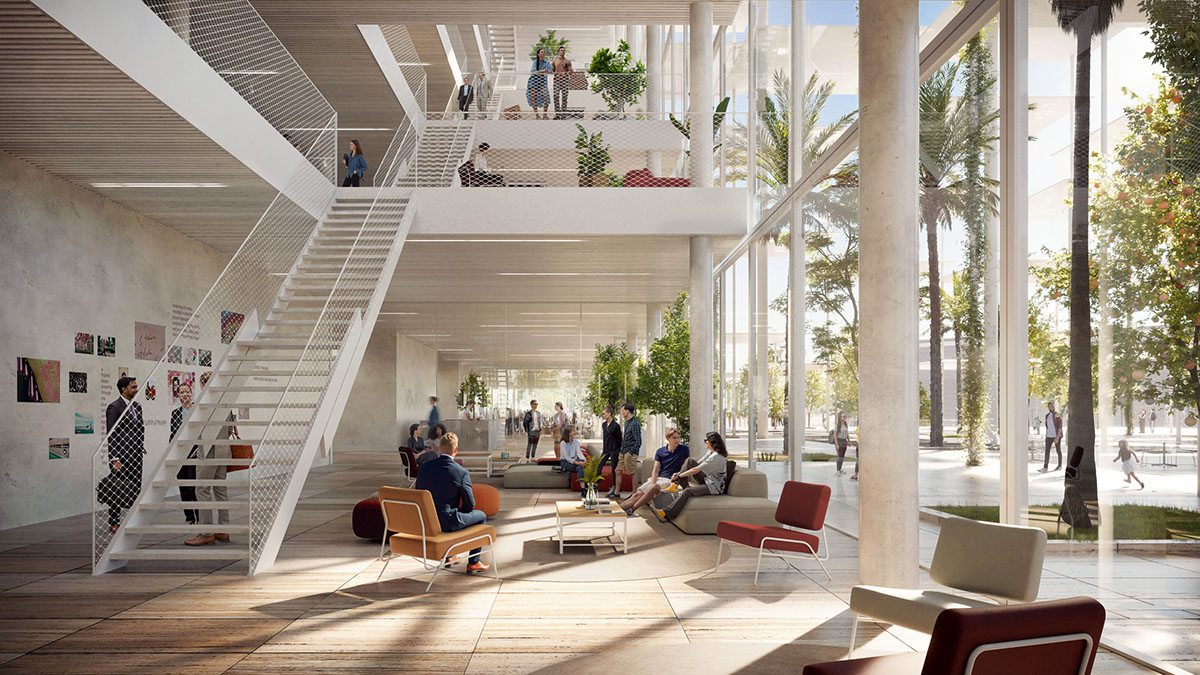 Inside, the functions of the new center are combined with public program and amenities, including dining, a conference center and social spaces on the ground floor.

The offices and research units occupy the upper floors due to privacy and security.

While the collaborative workplaces face the plaza, the deep-focus workspaces overlook the garden. BIG stated that "the proposed layout is designed to be entirely flexible and adaptable according to any future needs of the JRC." 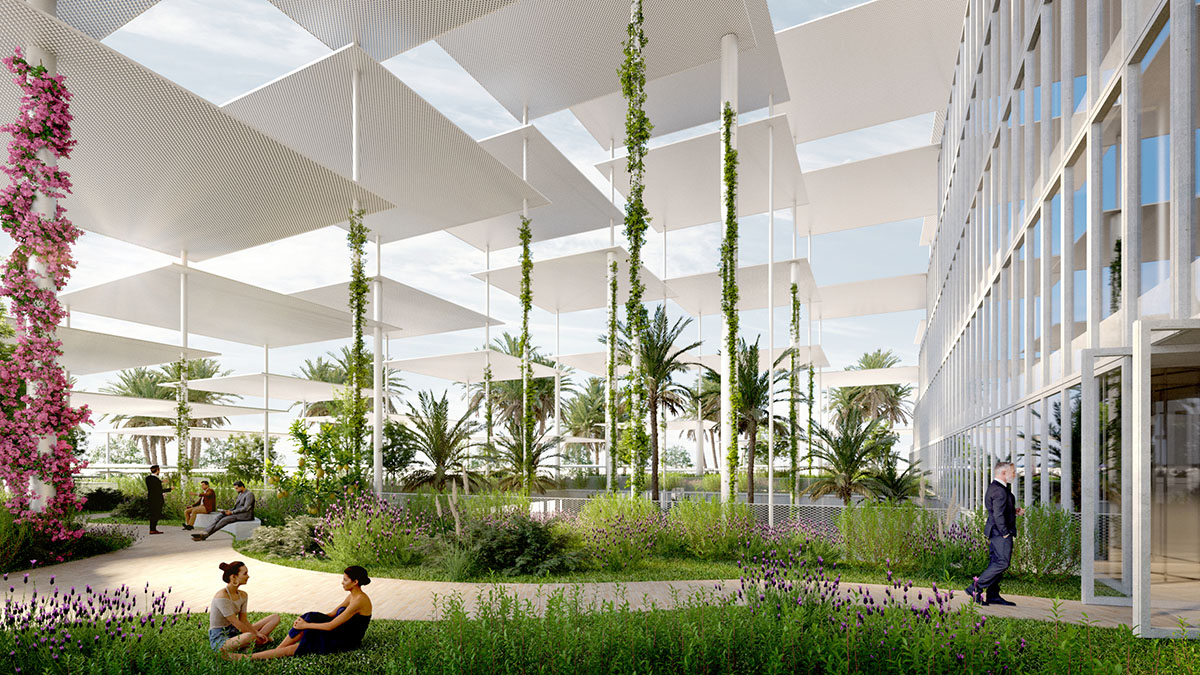 Following the building geometry and modularity two diagonal voids connect all levels of the building, encouraging physical movement as well as social interaction and informal meetings.

JRC staff and visitors will be more likely to take the stairs, increasing the chance of meetings and encounters between colleagues. 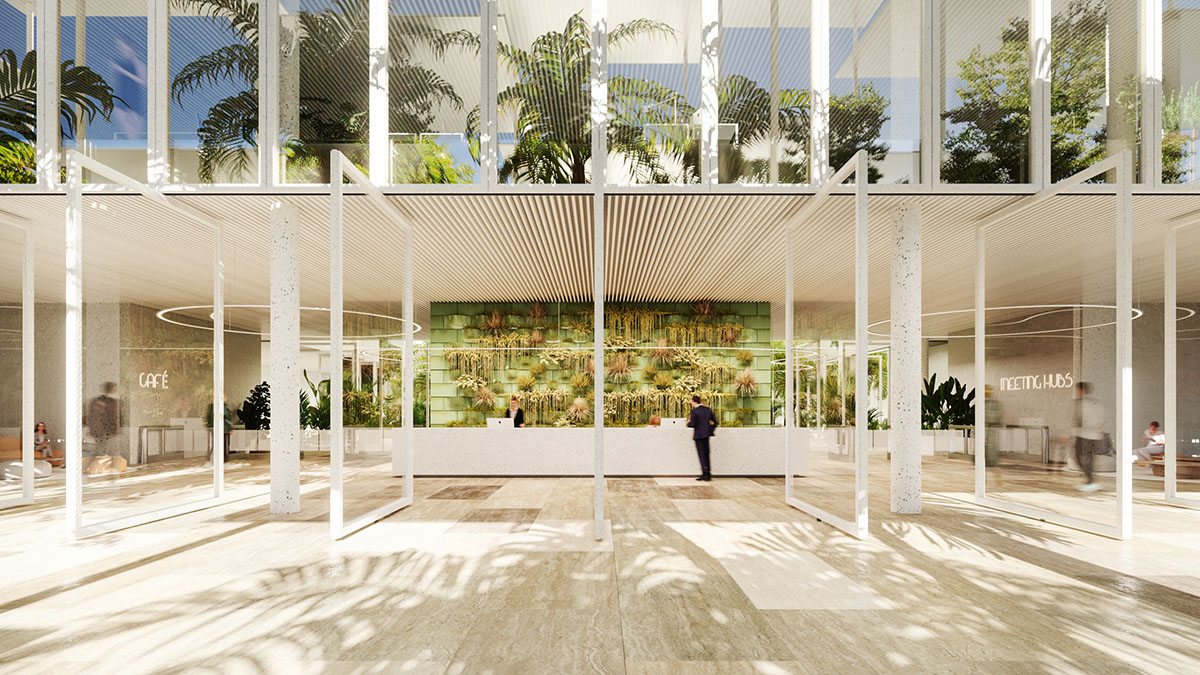 Passive design is ensured through the shallow floor plate of the building and continuous shading under the pergola cloud, while at the same time natural cross ventilation and ideal light quality are maintained by the form of the design. 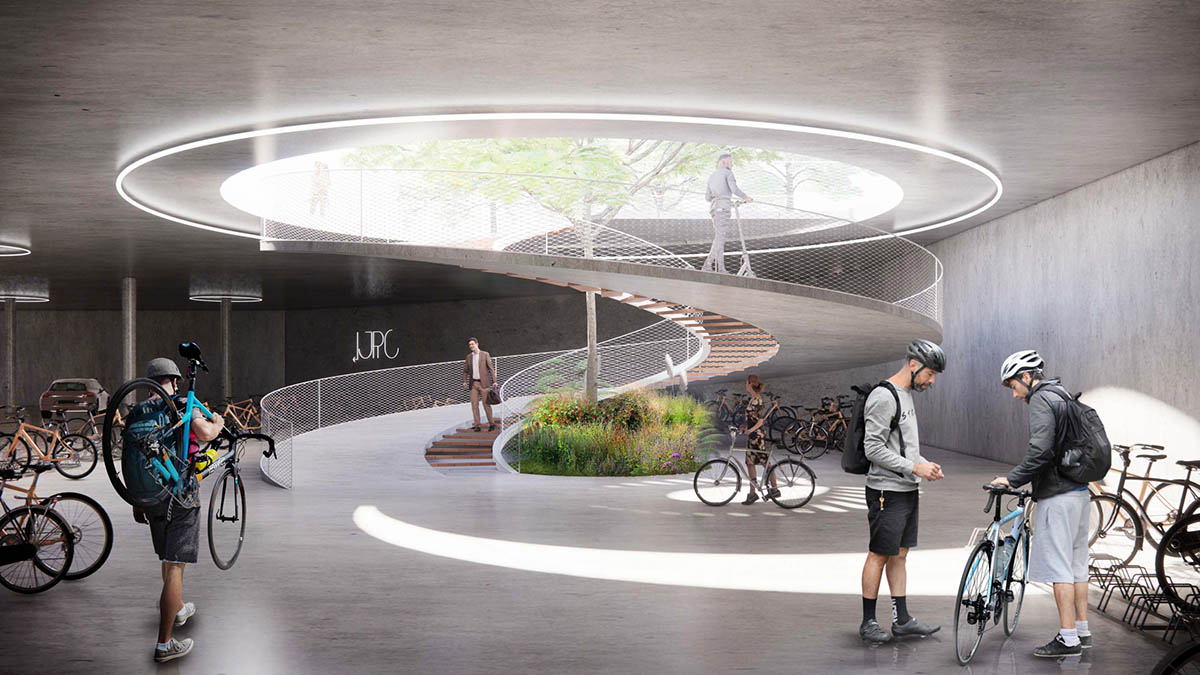 BIG added that the design is set to be built by using locally sourced materials, such as limestone, wood, and ceramic tiling.

The building structure is aimed to be low-carbon concrete, reducing up to 30 per cent of typical CO2 emissions, while the pergola cloud is made from recycled steel.

Other elements, such as gardens, greenery from the region, and water elements in the outdoor environment, seek to reduce/eliminate the heat island effect and create a comfortable microclimate. 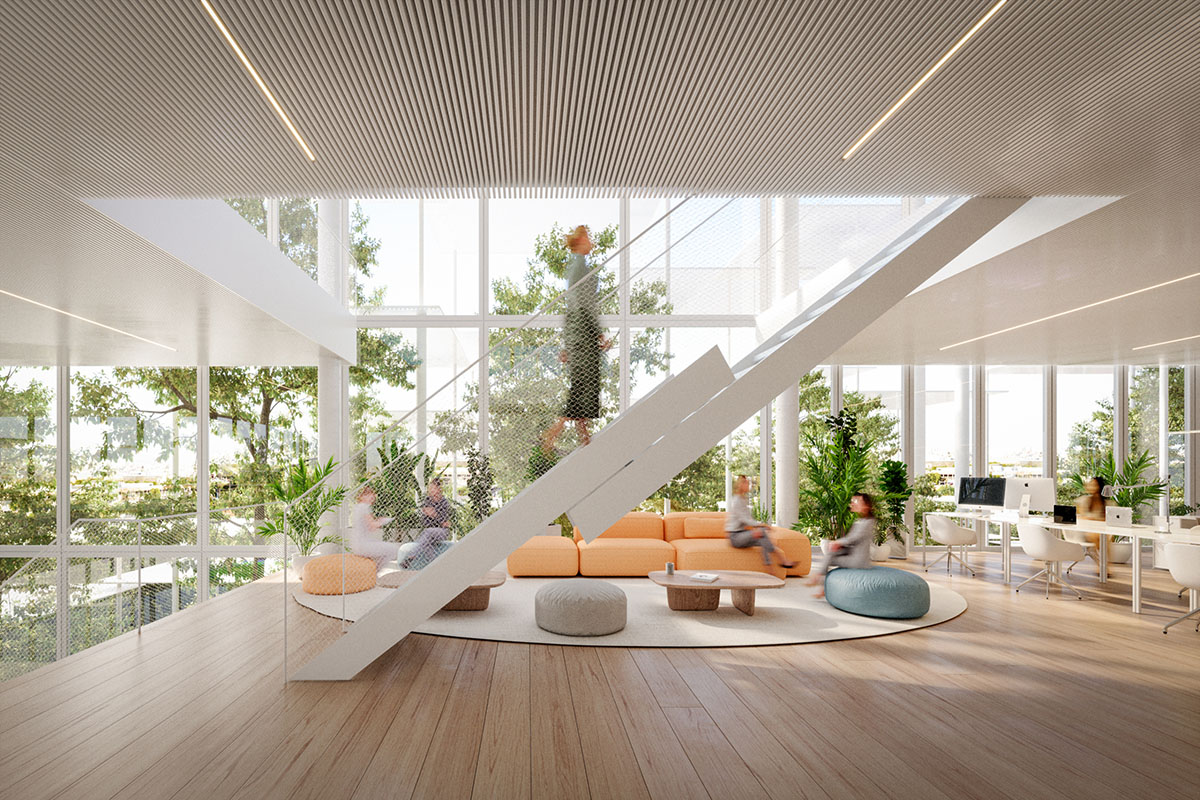 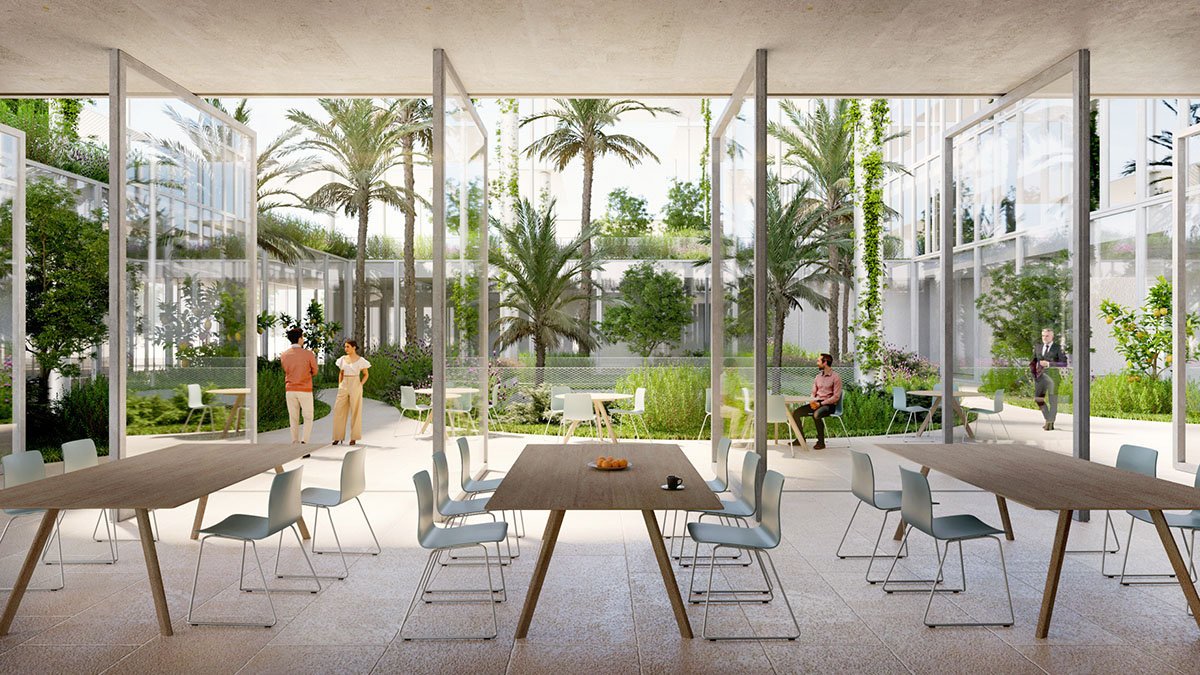 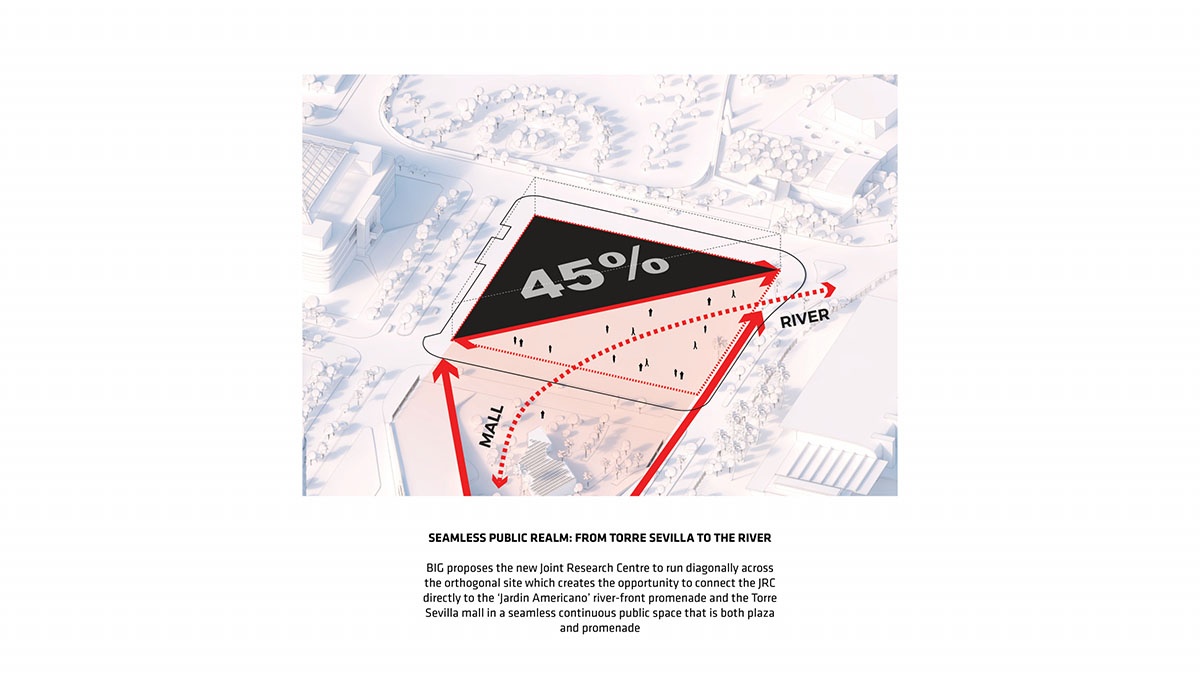 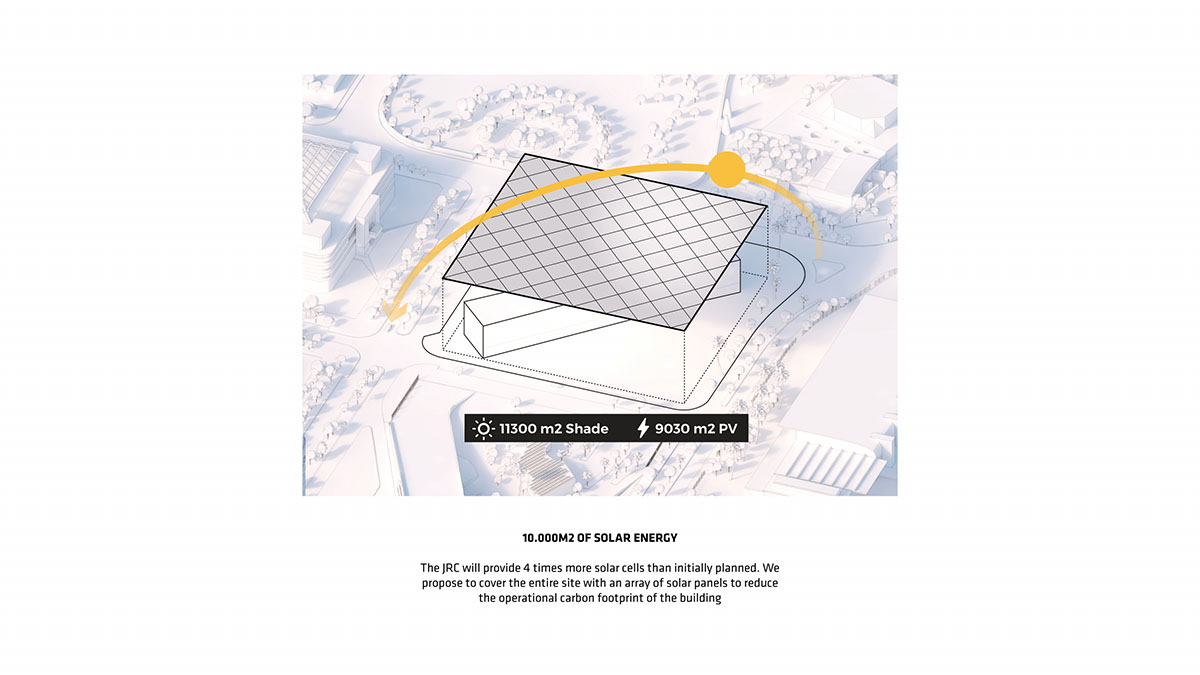 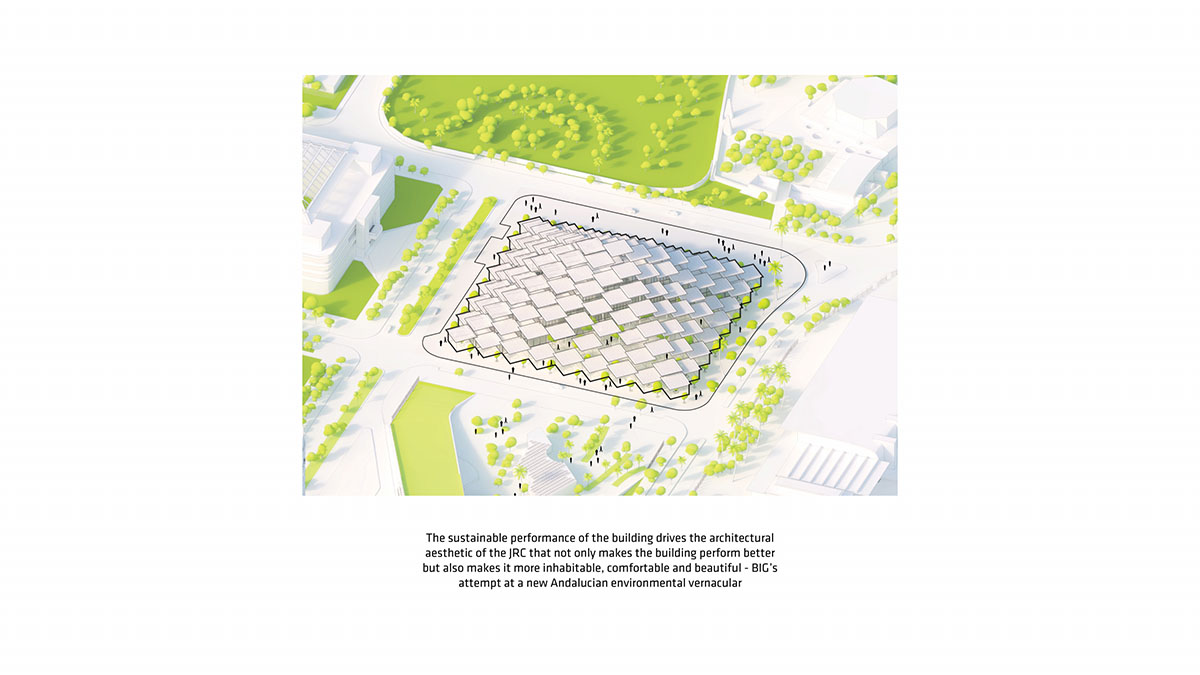 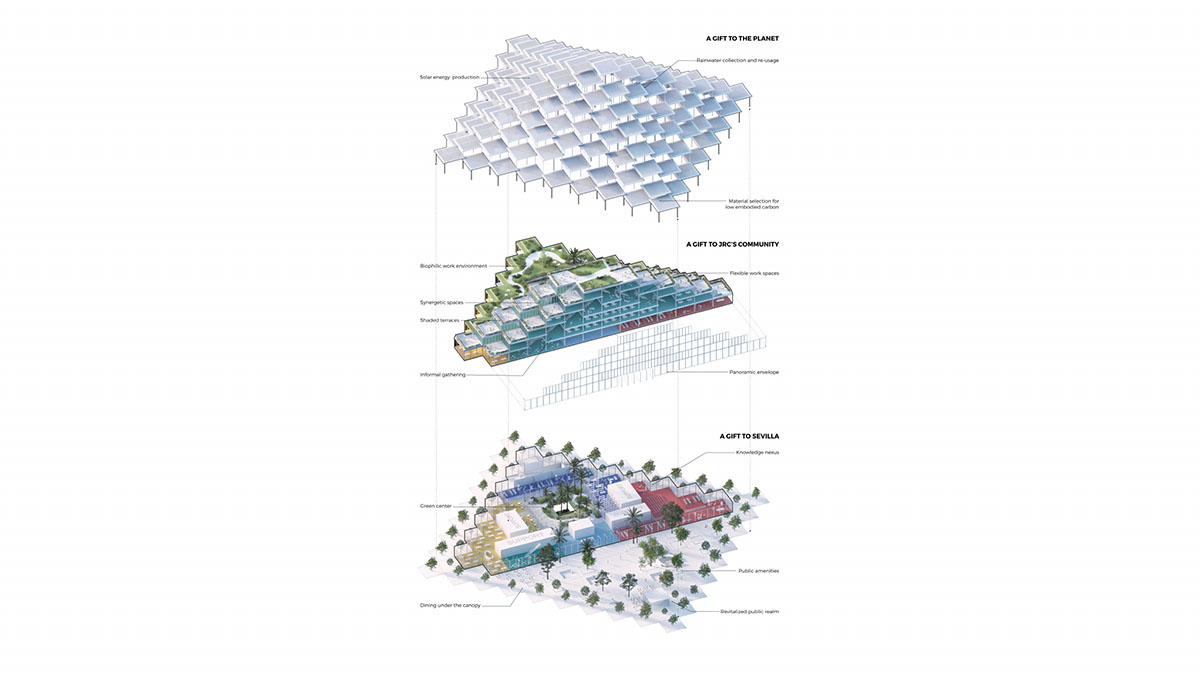 BIG recently released design for a Neuroscience and Psychiatrics Center in Denmark. BIG is designing a hotel room enclosed by 350 birdhouses in Sweden.

All images © BIG unless otherwise stated.