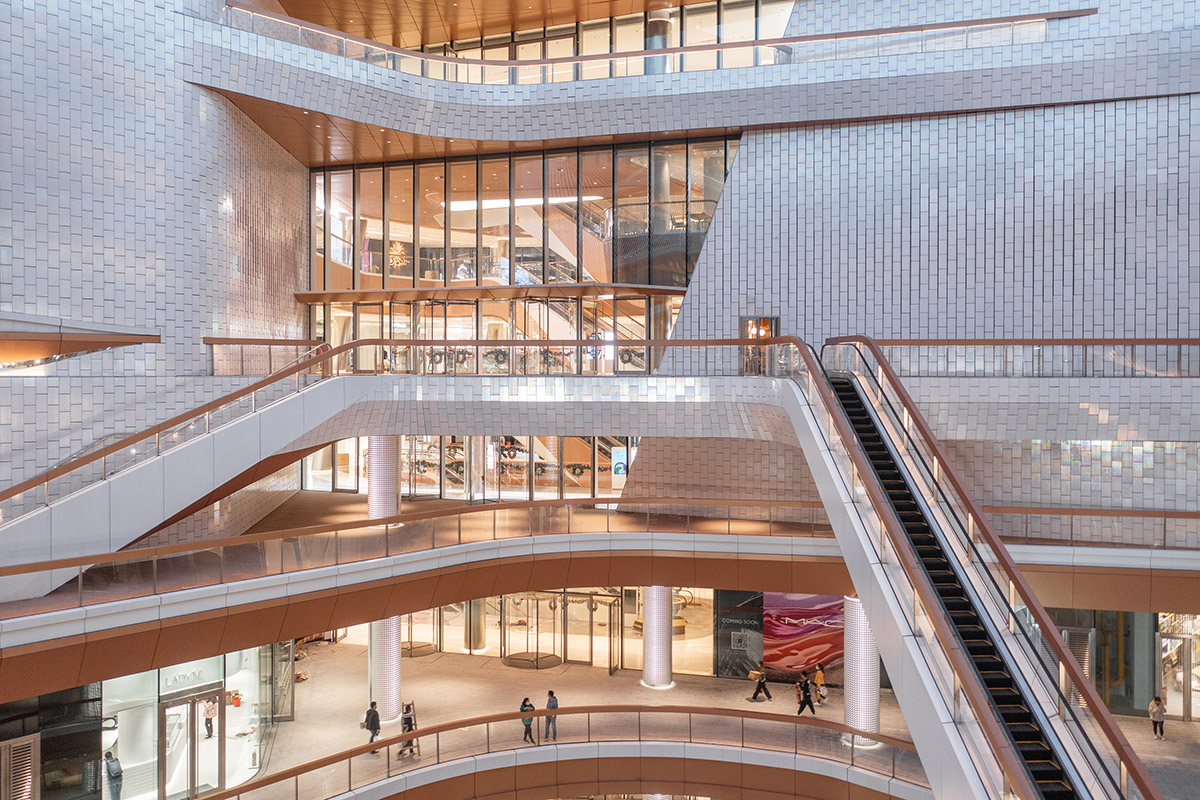 UNStudio and Nihon Sekkei have completed the Shanghai Jiuguang Center, by incorporating "human-centric design and an advanced commercial ecosystem" in Shanghai, China.

Described as "the largest retail complex in north Shanghai", the new shopping mall is conceived as a "customer-friendly destination" since it challenges to traditional closed shopping mall designs, according to the team.

While Nihon Sekkei designs the outer shell of the retail center, UNStudio was tasked with fleshing out the mall as a placemaking destination for customers and the larger community. This included the design of the inner courtyard and its facades, the full interior of the mall and a public rooftop terrace. 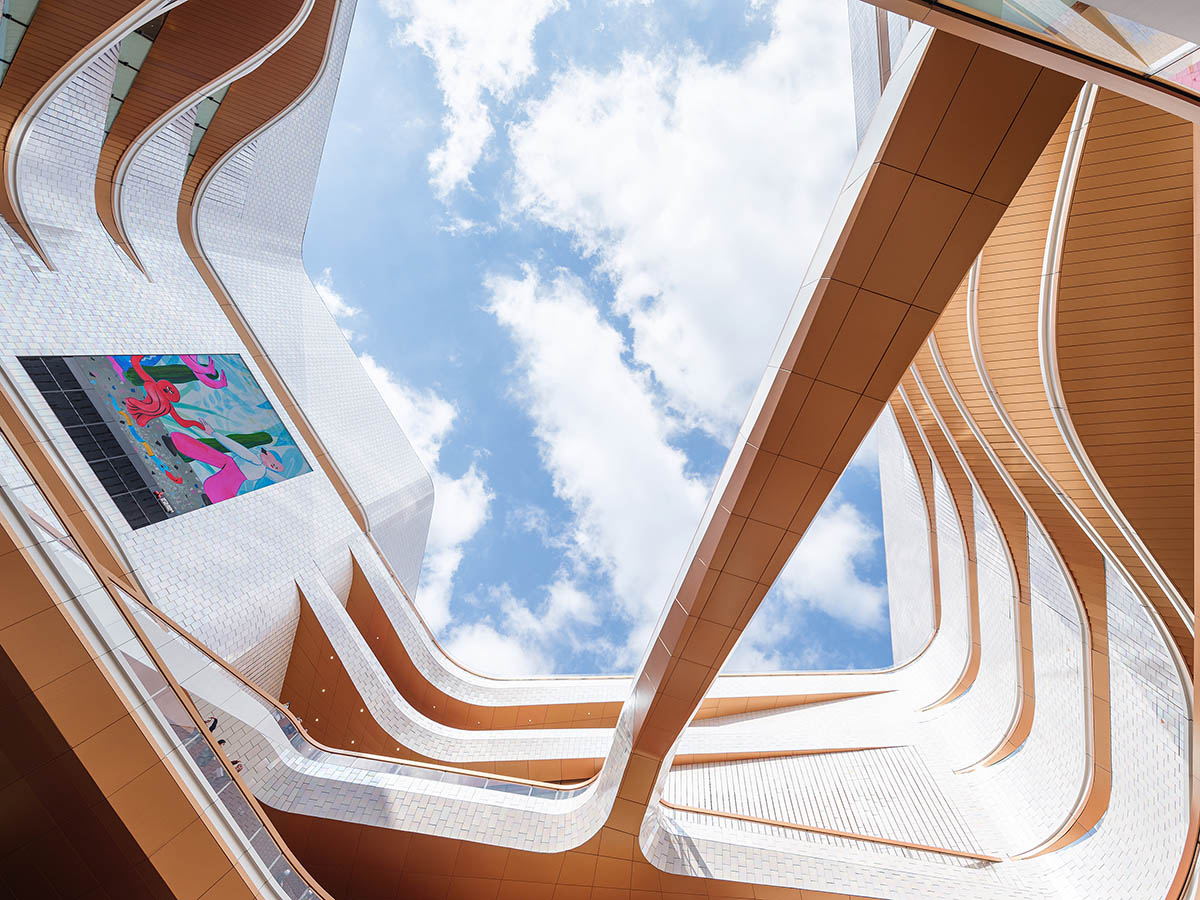 "Shopping malls are the public spaces of Chinese cities. These retail complexes are not simply places to shop, they are all-in-one destinations for outings and social gatherings," said Ben van Berkel, the founder of UNStudio and UNSense.

"They are also places where culture and commerce merge and where architecture can express this expansive condition," Van Berkel added. 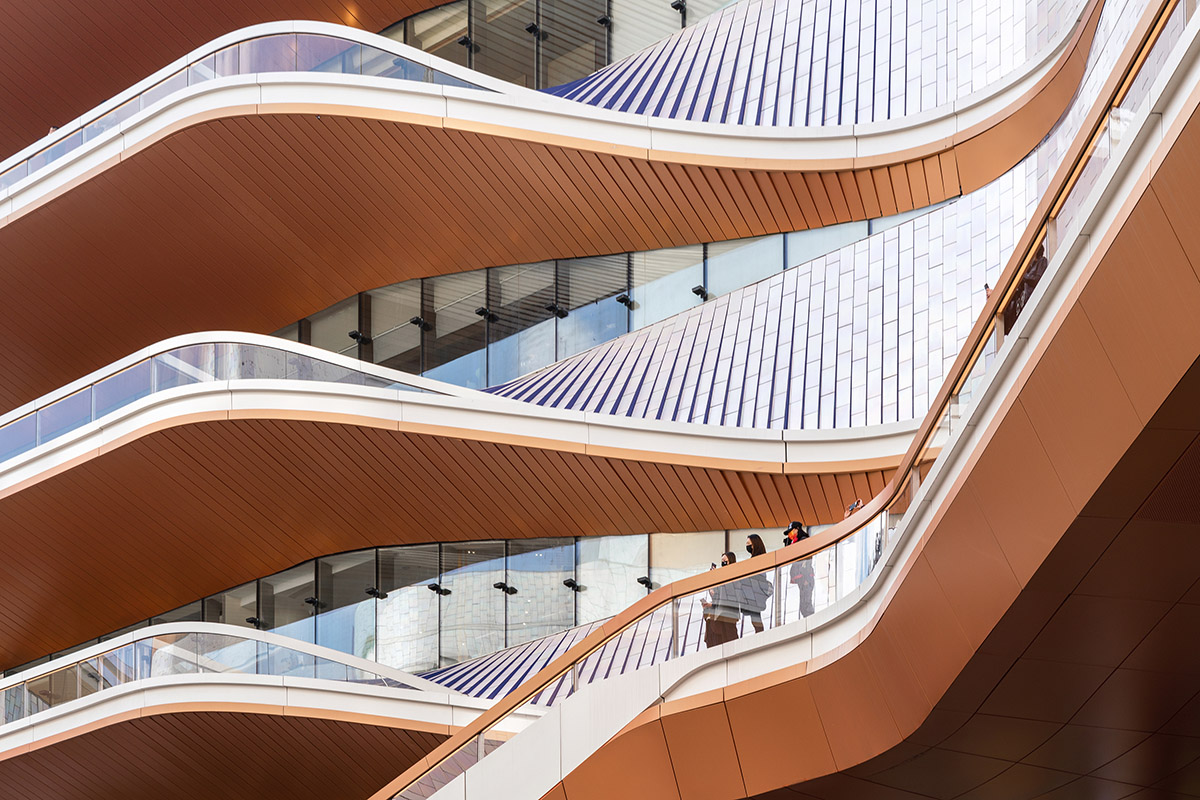 The retail center is composed of stack of volumes in which each of them is divided three main zones: speedy, slow and relief zone - highlighting three moments of people's movement.

While the structure creates its own corners for attraction points, a circulating and flowing floors function as main boulevards. These looping boulevards are circulating around a central courtyard. 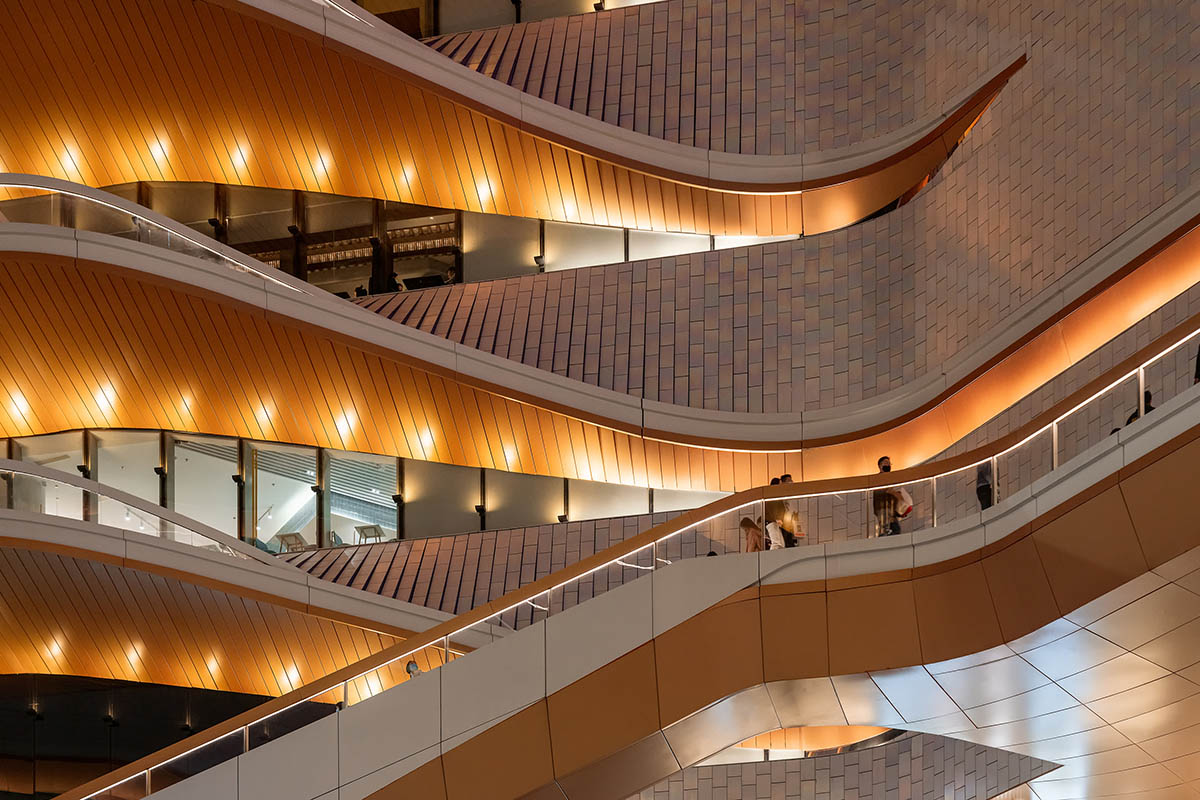 User experience becomes the key component of the complex. UNStudio looked at the numerous ways users could engage with the various spaces and created curated shopping experiences for different users informed the design of the building.

As the architects highlight, this created a synergy between the architectural and interior design, the building scale and the human scale, the geometry and materials and the inside-outside relationship. 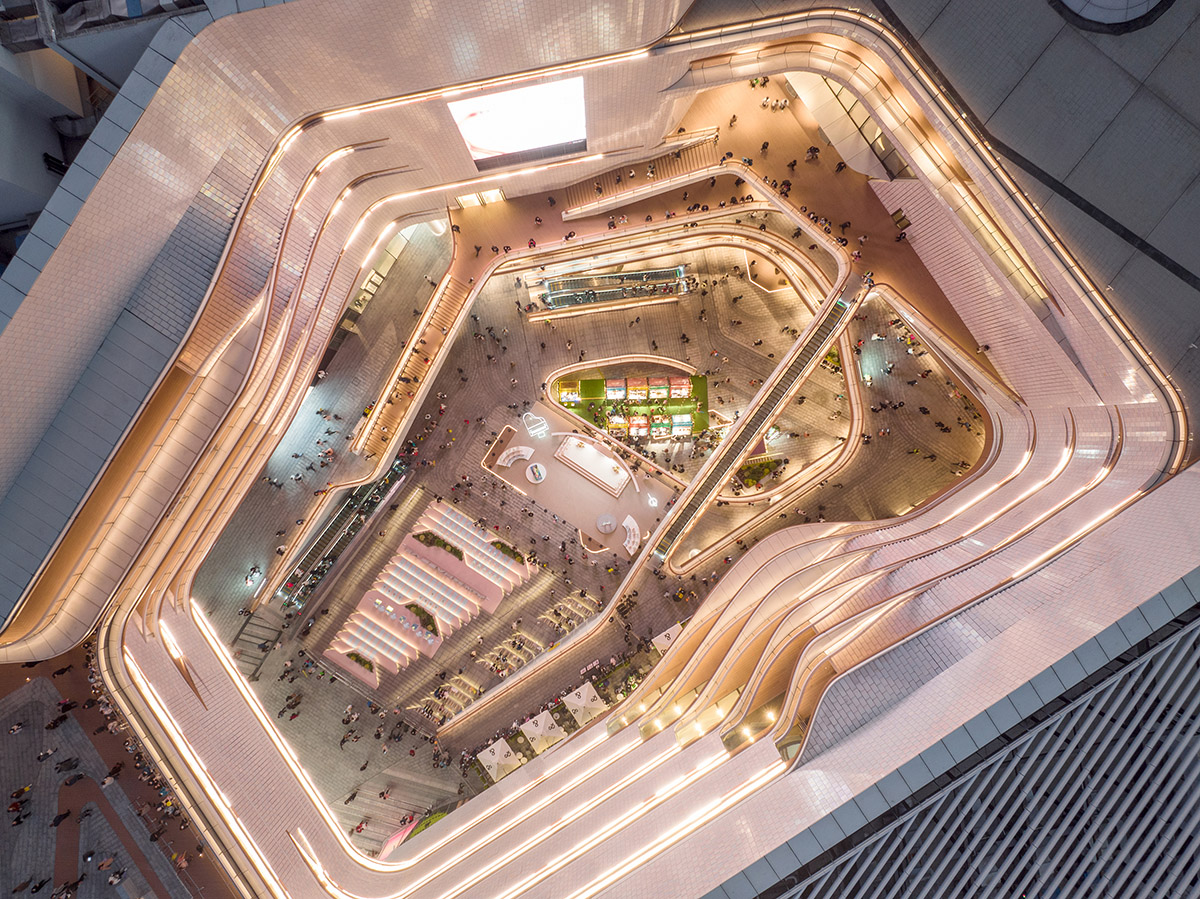 The design is shaped around a central courtyard and landscape area that sits at the heart of the mall. This courtyard not only serves as an event space for the mall itself, but also provides a destination for the wider community.

An integral element of the central courtyard is the sunken area with integrated seating, planting and lighting that is also designed to be used for events. As such the courtyard becomes a destination both during the day and in the evenings. 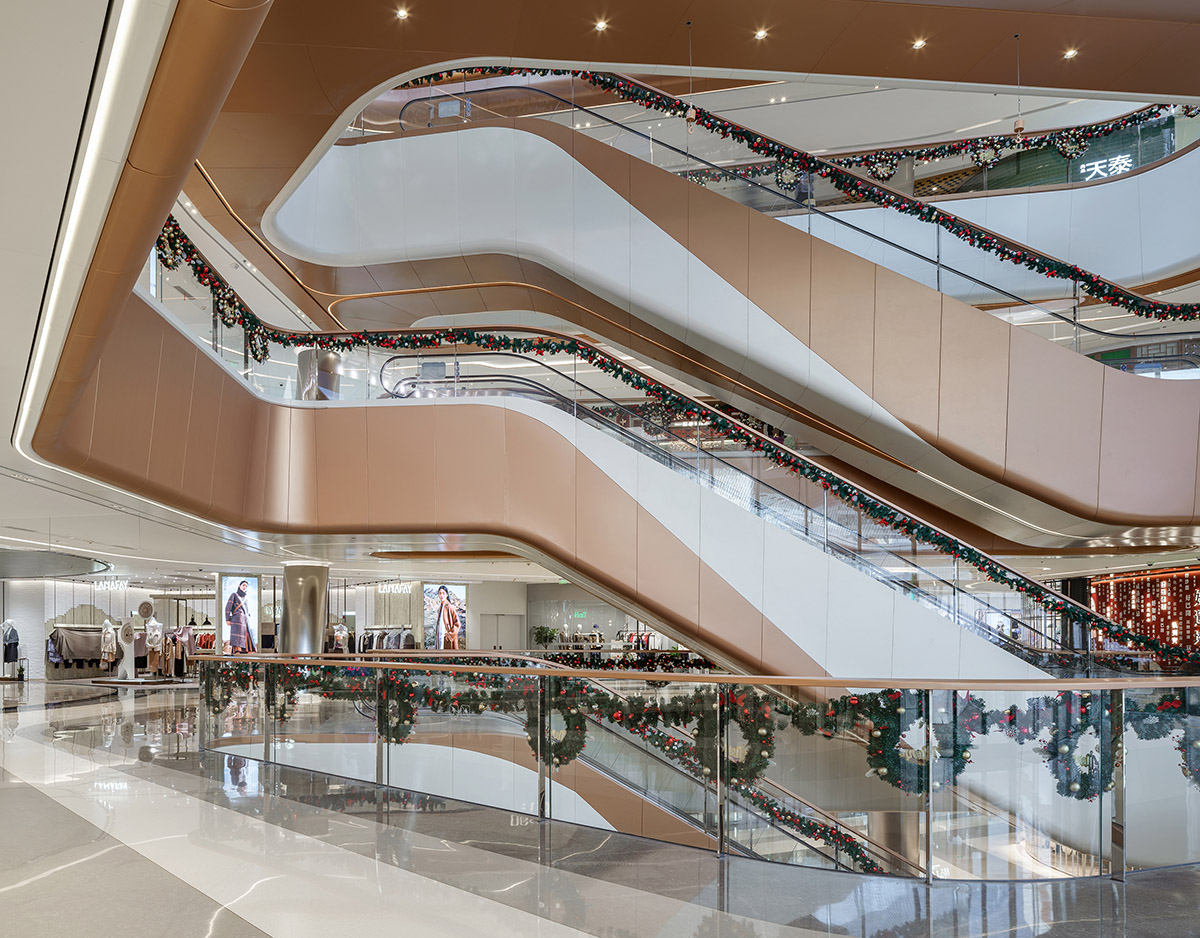 The courtyard landscape links the basement levels and the upper levels by way of a generous staircase and escalators. In addition to providing direct access on ground floor, the articulation and horizontal window bands in the facades surrounding the courtyard create a strong visual connection between the external space and the interior public areas on all the levels. 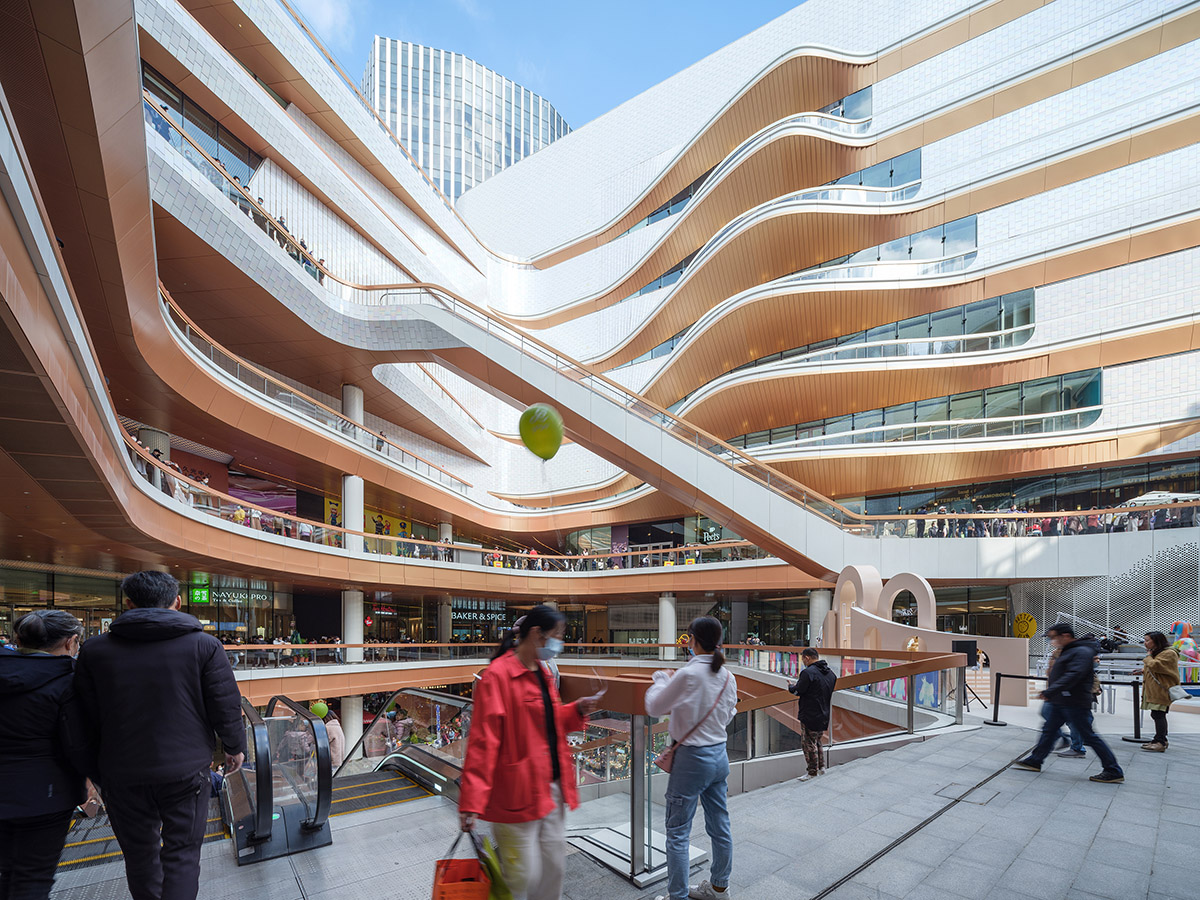 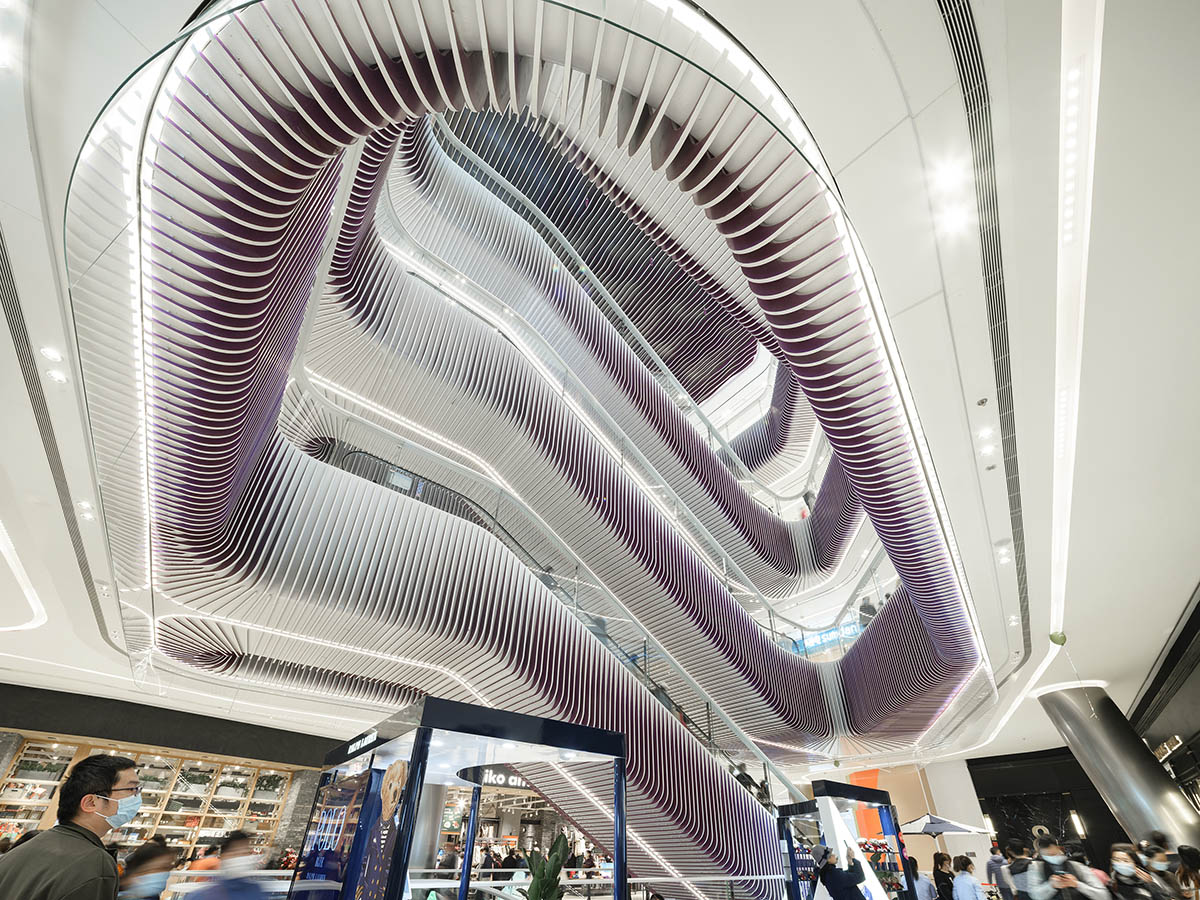 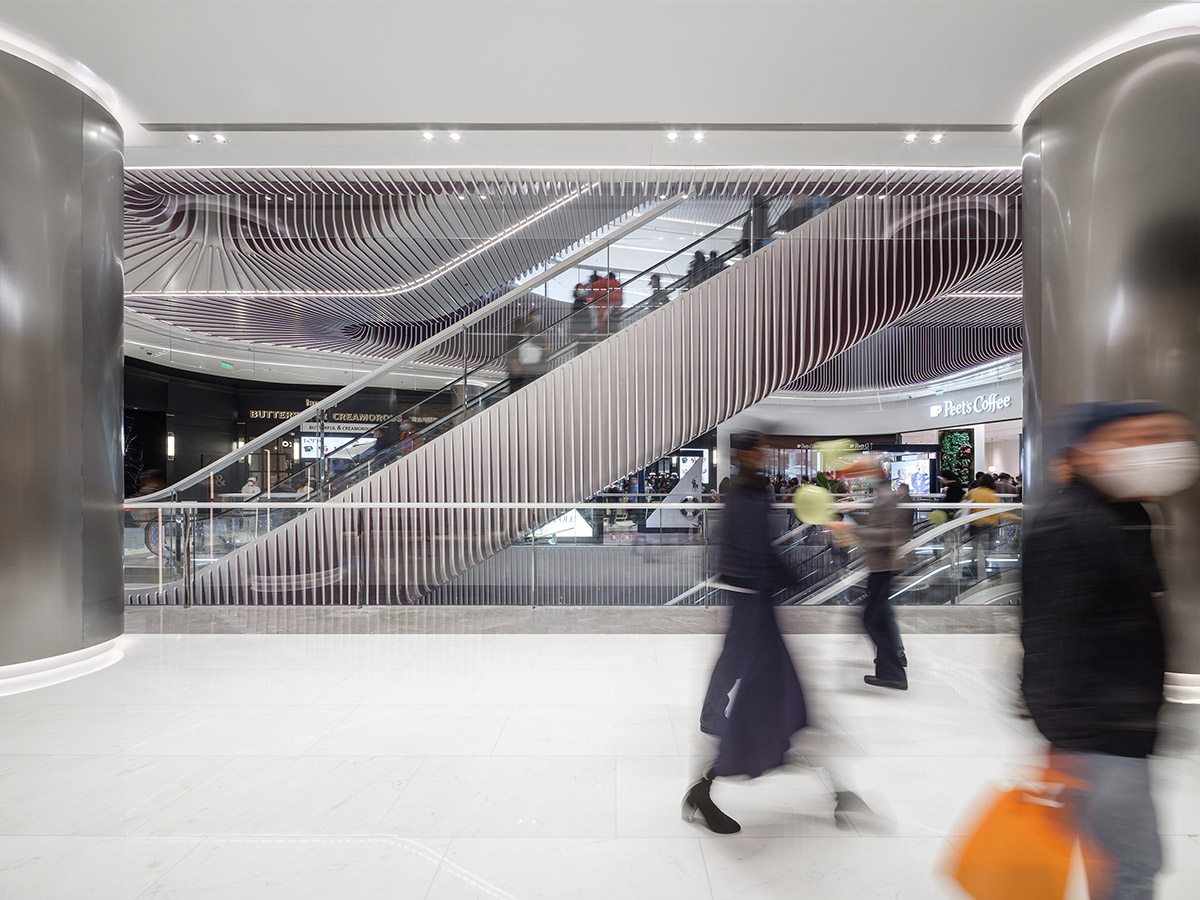 The face of the mall

The courtyard facade was conceived as a pearl set within its shell, referring to the tessellated enclosure of the exterior facade, which opens up to a fluid experience and a mother-of-pearl effect as you enter the central courtyard.

The various balconies that are connected to the void spaces blur the relationship between interior and exterior, while the pearlescent material finish of the ceramic tiles emphasises the daylight falling on different areas of the facade and creating dynamic reflections throughout the day.

The surrounding façade also expresses the interior design and identity, with the balcony detail also featuring colour that is matched with the colours predominantly used to accentuate three interior voids. 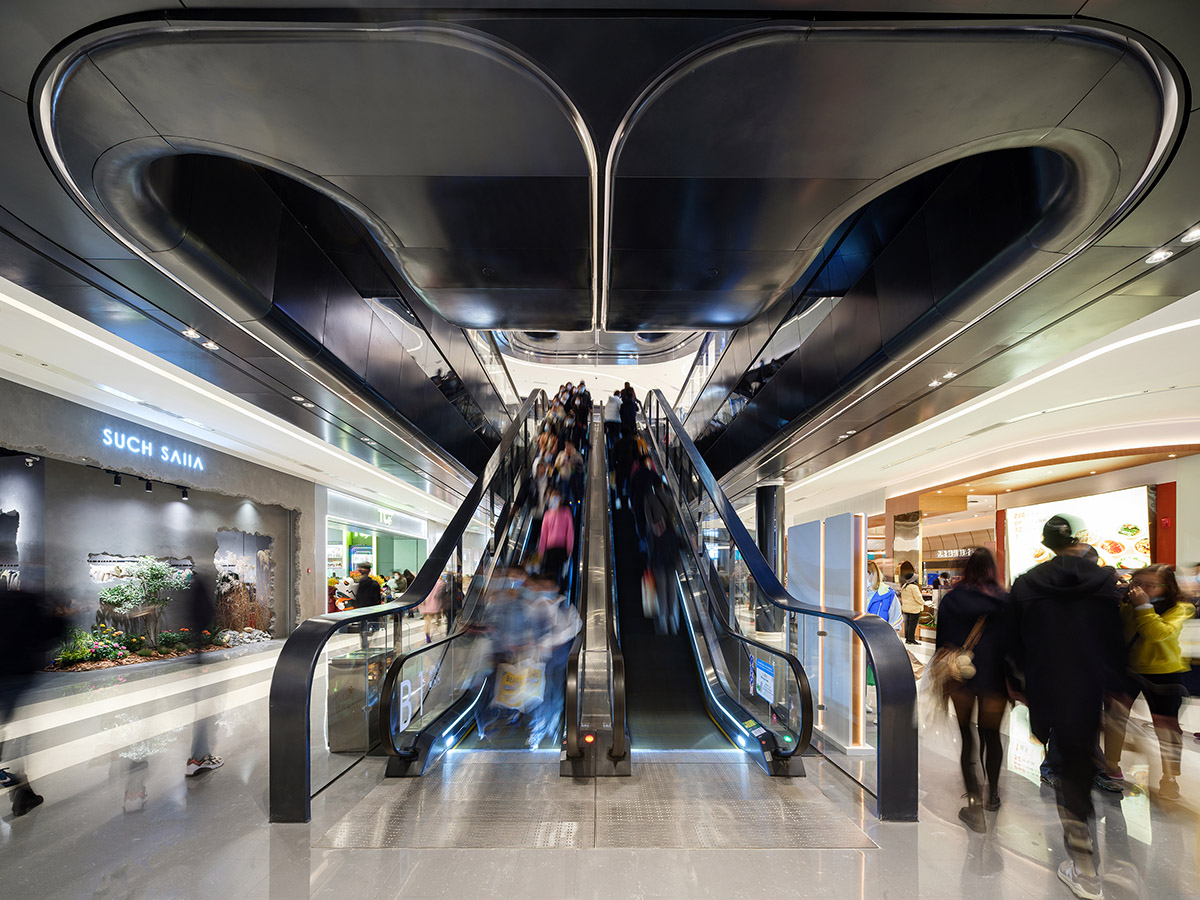 The strong relationship between the exterior and interior continues in the organisation of three internal voids which are located on the perimeter of the courtyard. Long bands of windows along the courtyard enable glimpses to the interior spaces, while light enters the void spaces through the facade, creating vertical spaces flooded with daylight.

Each void has its own distinct identity and materialisation, based on three different themes that vertically link the shopping experience and help to orientate users within the expansive retail areas. 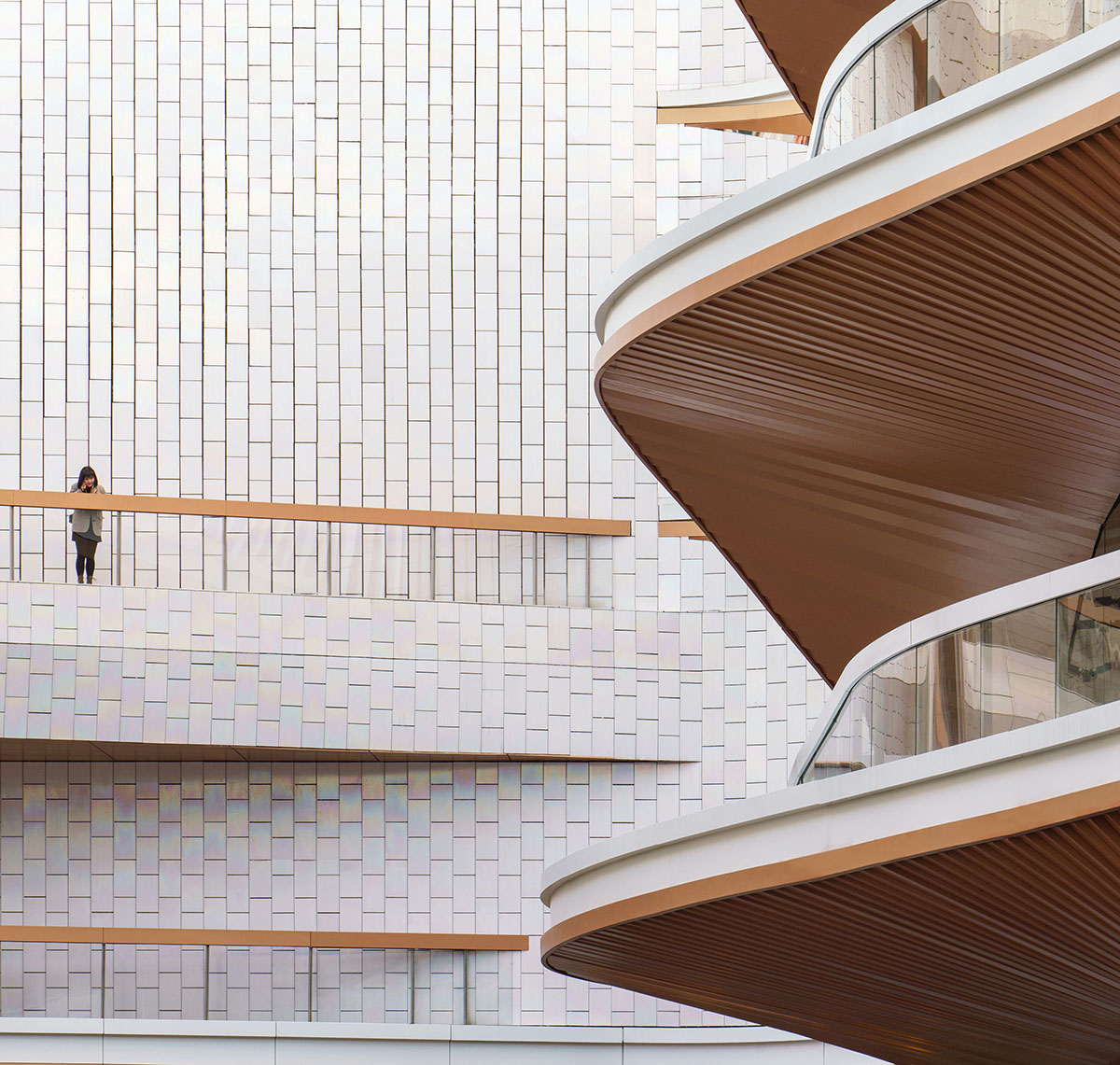 The ‘urban playground’ themed void, with its bright a colorful material scheme, expresses the bustle of the city outside. For the second void, with the theme ‘urban oasis’, the materialisation sets out to re-connect with nature, using warm colour tones and brass articulations throughout. The third void, which is themed as an ‘urban catwalk’, describes a nighttime atmosphere that is reflected in the dark, glossy materials used.

The three voids anchor the public circulation areas and create a vertical space across the different retail levels. They further supply the circulation spaces with daylight, while providing glimpses to the courtyard outside. 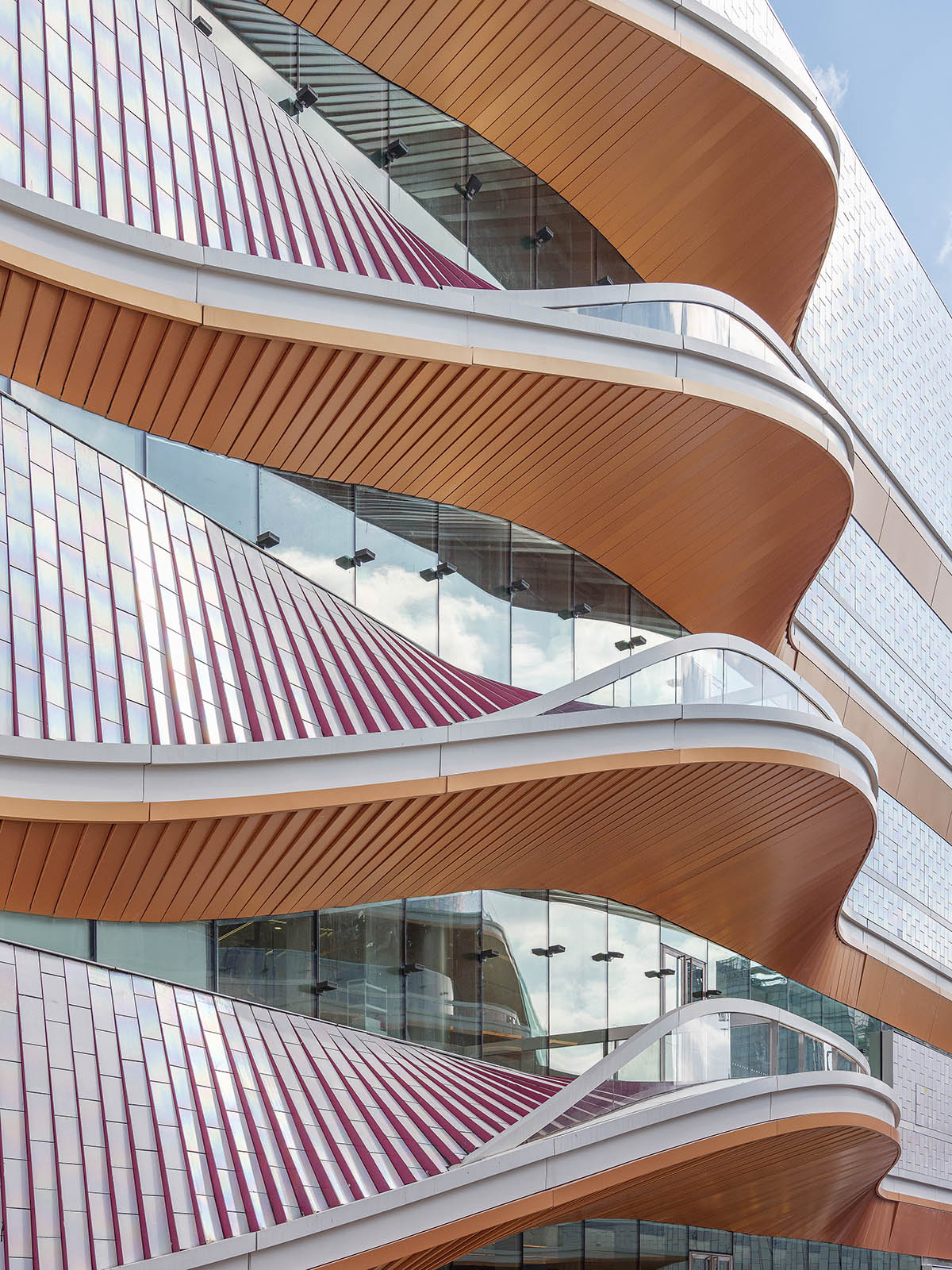 The main vertical circulation is located alongside these voids, while the voids themselves are connected on each floor by a retail boulevard: a continuous route that provides access to all shops. On every floor this internal boulevard is curated into three zones with a series of attraction points.

The ceiling design integrates a pattern that acts as a wayfinding element, pointing to common areas such as restrooms, elevators and the escalators located next to the voids.

The retail boulevard, along with the three themed voids, form an interior public space that creates a constant flow of people, which adds to the overall orientation and curated experience of the building. 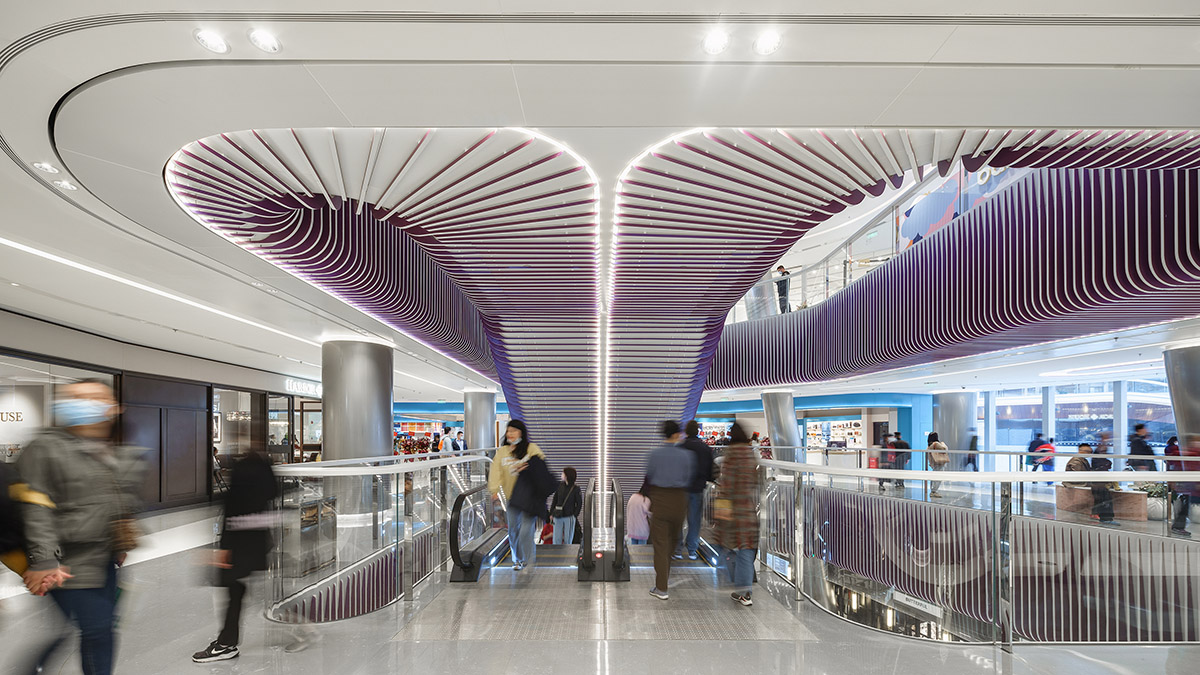 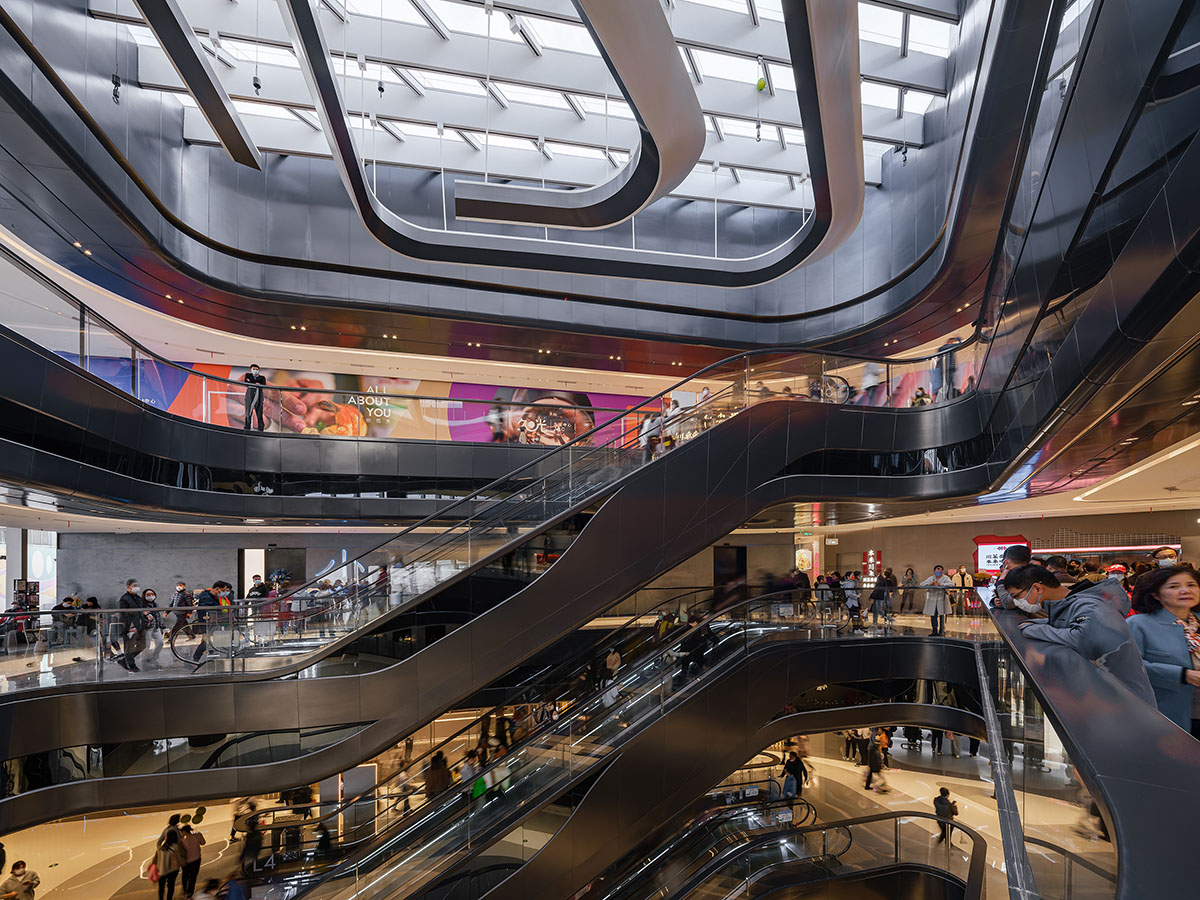 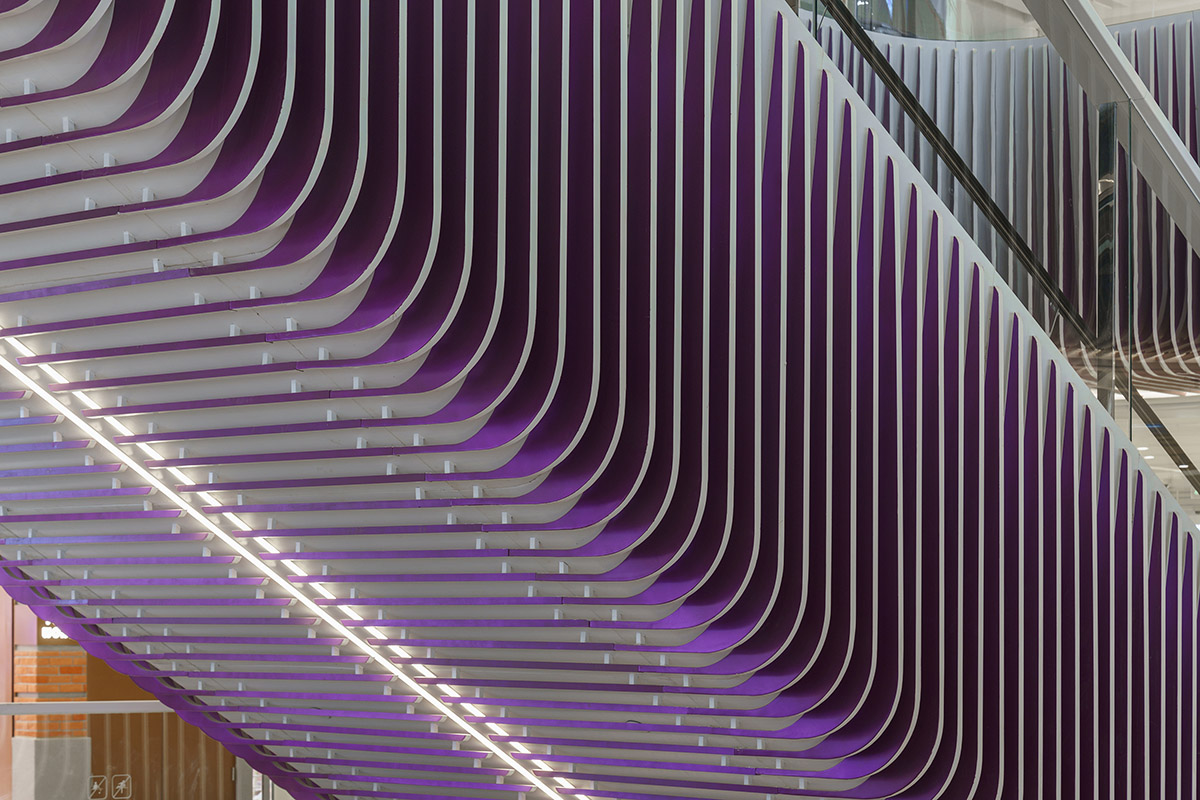 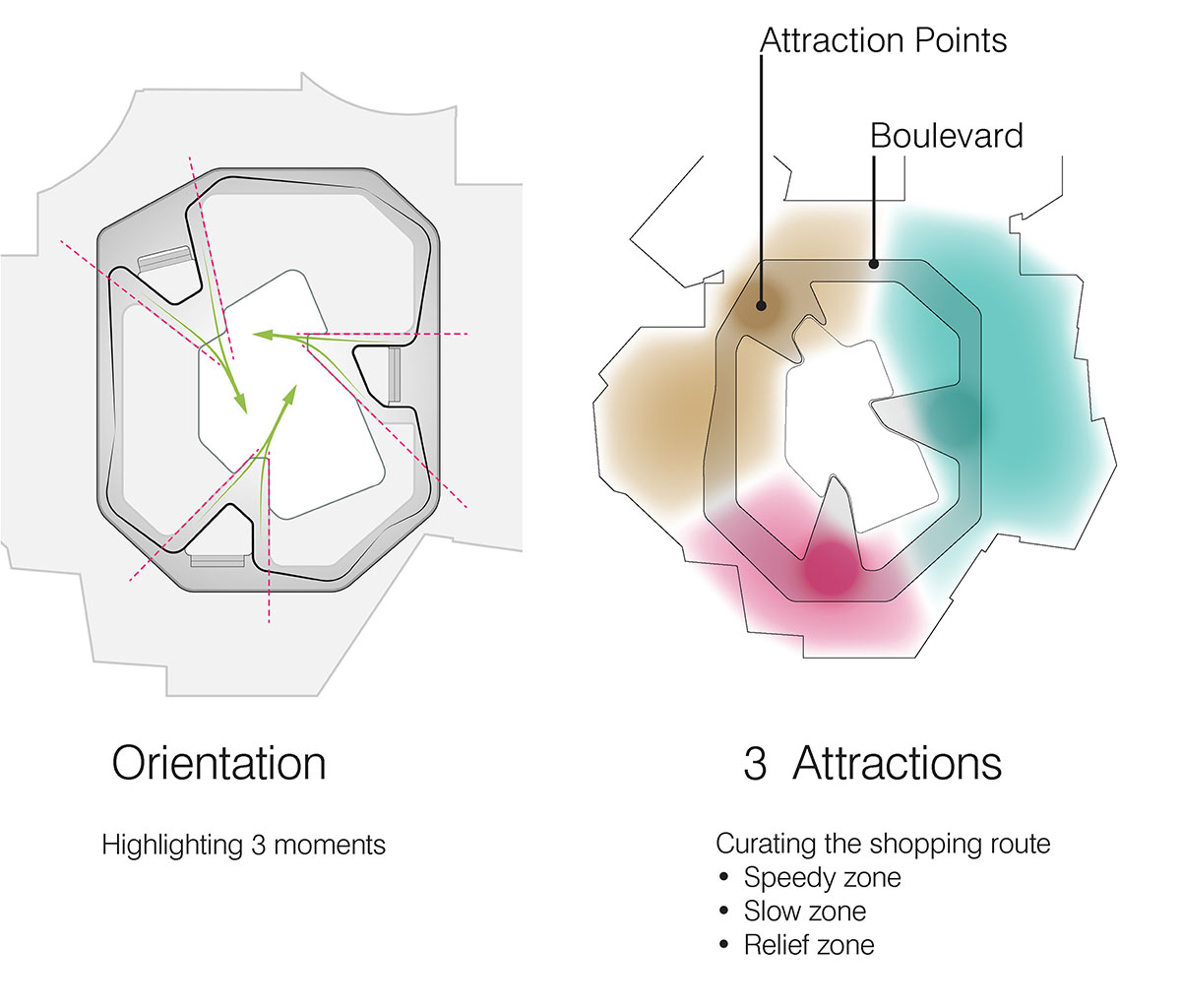 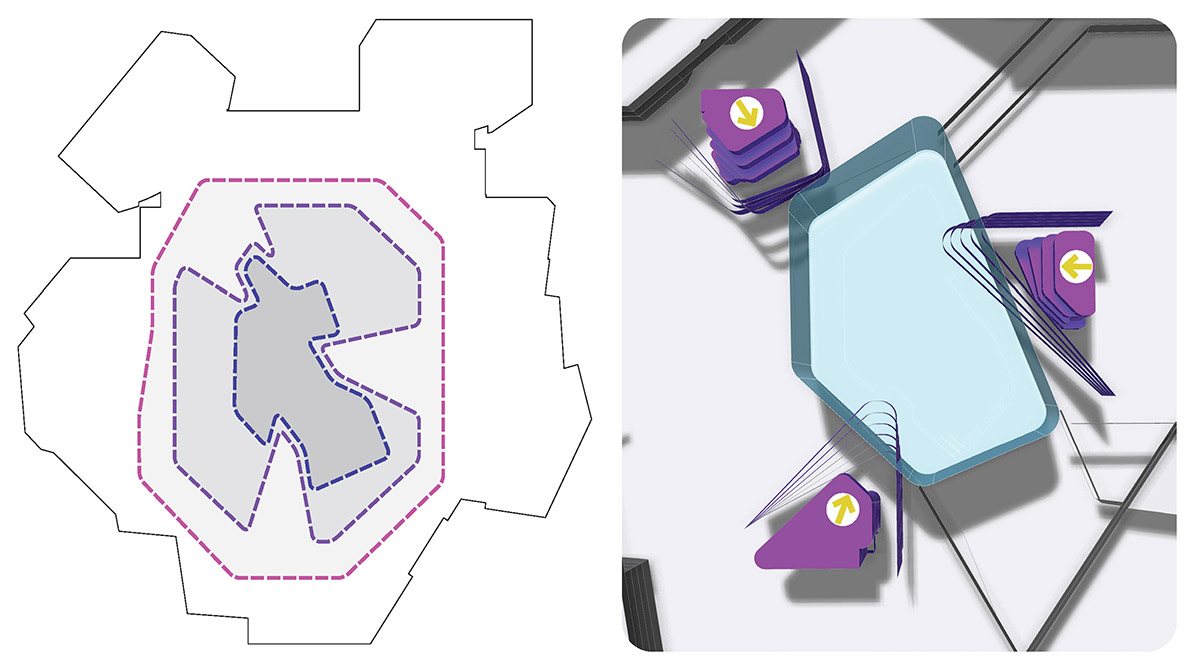 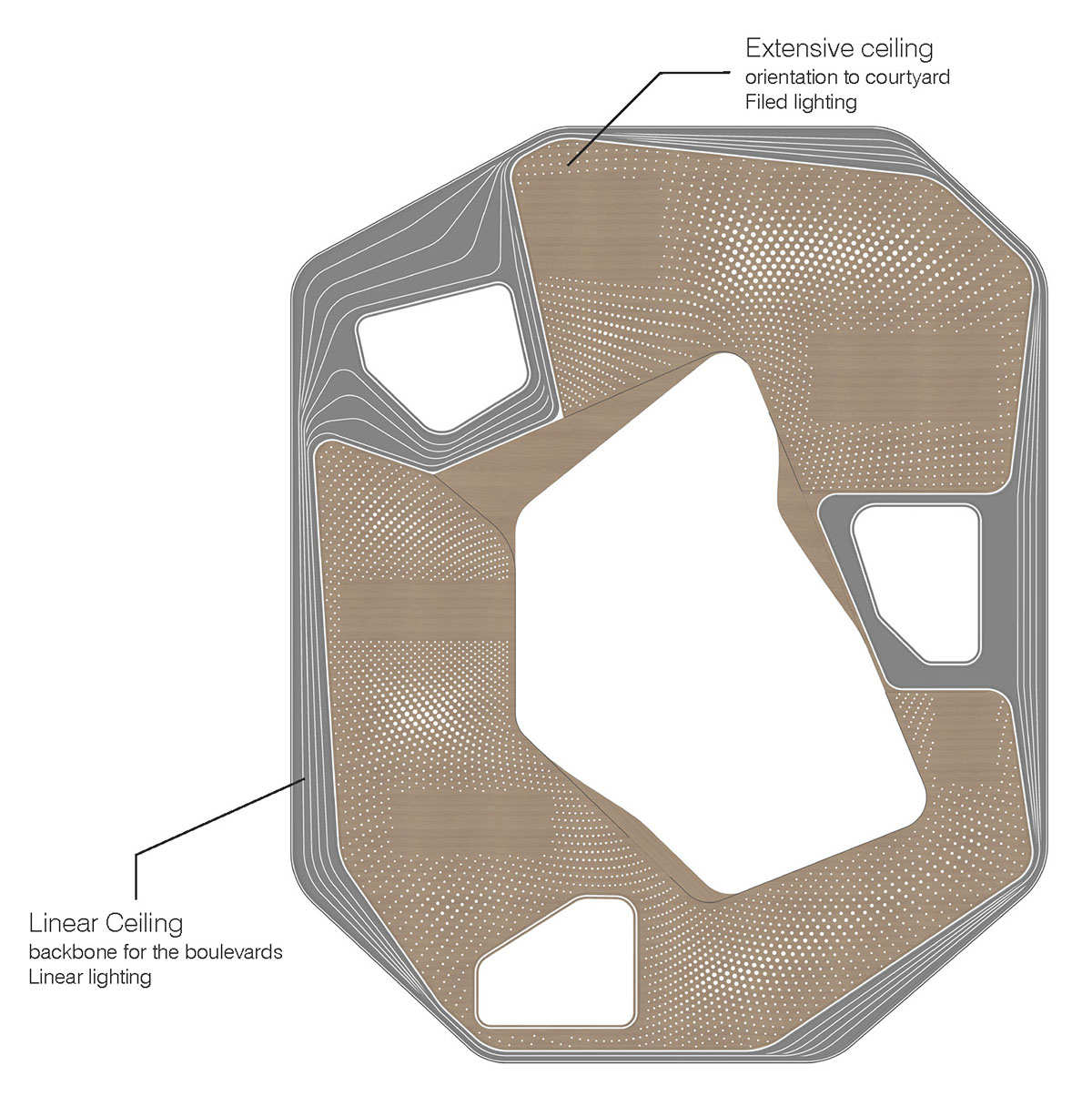 UNStudio is currently working on a community-focused residential complex in Moscow. The firm also released plans for a new tech-assisted masterplan for a 10-minute city in Seoul.