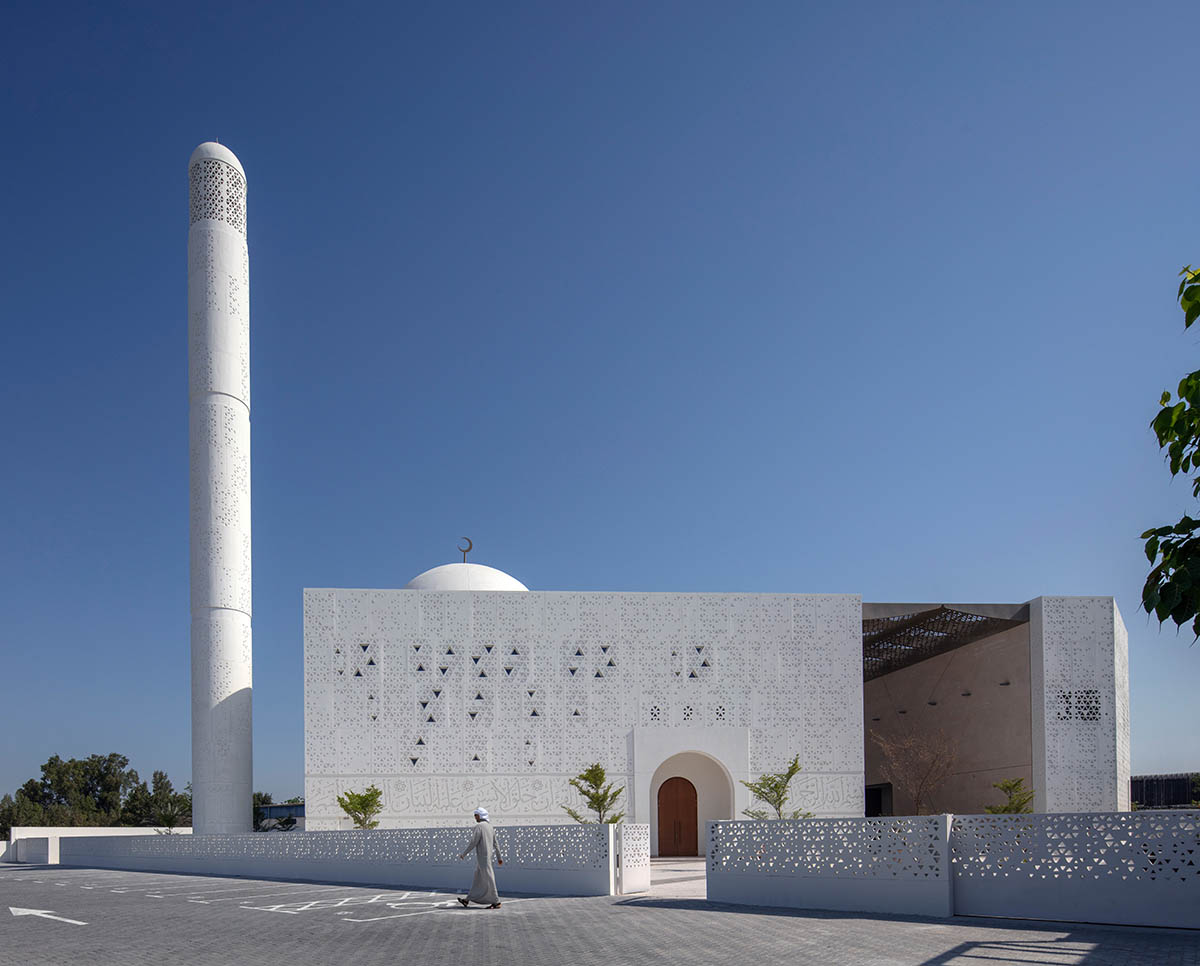 Dubai-based architecture practice Dabbagh Architects has built a mosque featuring a perforated façade to create a more controlled light so that the light can be the protagonist of design to evoke "a sense of calm."

Named Mosque of the Late Abdulkhaliq Gargash, the 1,680-square-metre building is envisioned as a contemporary place of worship that is distinctive with its use of form, materiality, and controlled natural light.

Led by Principal Architect and Founder, Sumaya Dabbagh, the mosque is one of the first in the UAE to be designed by a female architect. The new mosque is located in Um Suqeim Road, Al Quoz, Dubai, United Arab Emirates. 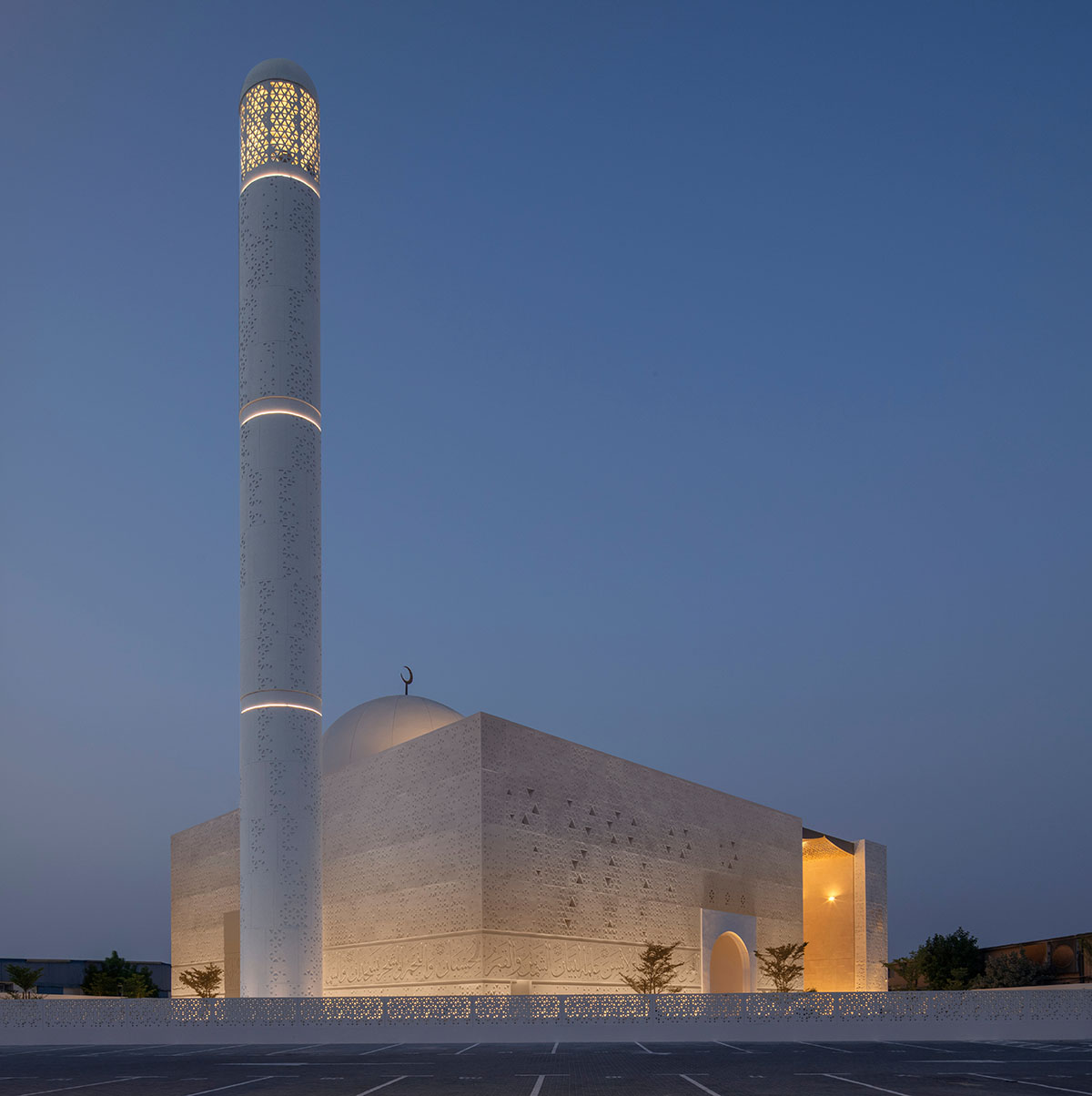 Thanks to the building's porous skin, the building plays with light in a much more controlled manner to evoke a sense of calm, spiritual connection, and to transition the worshiper from the outer material world to an inner sense of being.

Sumaya is one of only a few Saudi female architects of her generation, and among a handful of women architects leading their own practice in the Gulf region.

With a reputation for crafting culturally relevant buildings in dialogue with their surroundings, she places an emphasis on the intangible in architecture; seeking to create meaning and a sense of the poetic in order to form a connection with each building’s user.

Previous projects include Mleiha Archaeological Centre in 2016, a curved sandstone structure that rises from the desert in the small town of Mleiha, a UNESCO World Heritage Site. The project was awarded an Architecture MasterPrize in 2020, amongst other award wins, as well as being nominated for the Aga Khan Awards in 2018. As a gift to the community, and in honour of the late patriarch of the family, Mohamed Abdulkhaliq Gargash, the Gargash family’s brief was to create a minimal contemporary mosque, a calm and spiritual space for prayer, for the community of the Al Quoz, the industrial heart of Dubai. Committed to supporting local industries, and in keeping with the practice’s sustainable approach to design, Dabbagh Architects sourced materials from the mosque’s locality: stone from Oman; concrete, aluminium, cladding, joinery, and ceramics from the UAE.

At the heart of the design approach is the enhancement of the act of worship, and a transitional journey throughout the building so that the worshiper is ready for prayer and feels a sense of intimacy with the sacred.

"Creating a space of worship was a very particular design challenge. Prayer is a devotional act. It requires the worshiper to be totally present. With all of the distractions in our modern, busy lives, it can be challenging to quiet the mind and find an inner calm to allow for full immersion into prayer," said Sumaya Dabbagh.

"Through the design, a series of spaces are created that allow the worshiper to transition from the busy outer world and prepare for an inner experience." Light as a tool to create a connection with the divine

Natural light is used as a tool to enhance a feeling of spirituality, the connection between the earthly and the divine, and to mark the worshiper’s journey through the building. Scale also plays a role in creating this sense of sacredness.

Starting at the mosque’s outdoor entrance, perforated shading creates a threshold of perforated light that leads the worshiper to the ablution area, where physical cleansing invites the clearing of the mind and preparation for prayer. The route continues through to a lobby space, where further shedding of the material world takes place through the act of removing one’s shoes.

Once inside the prayer hall, the visitor further transitions to a contained space where reading from the Quran may take place before prayer. All the while, the quality of light from one space to another changes to enhance the preparation process so that when the worshiper finally enters the main hall, they are ready for prayer. 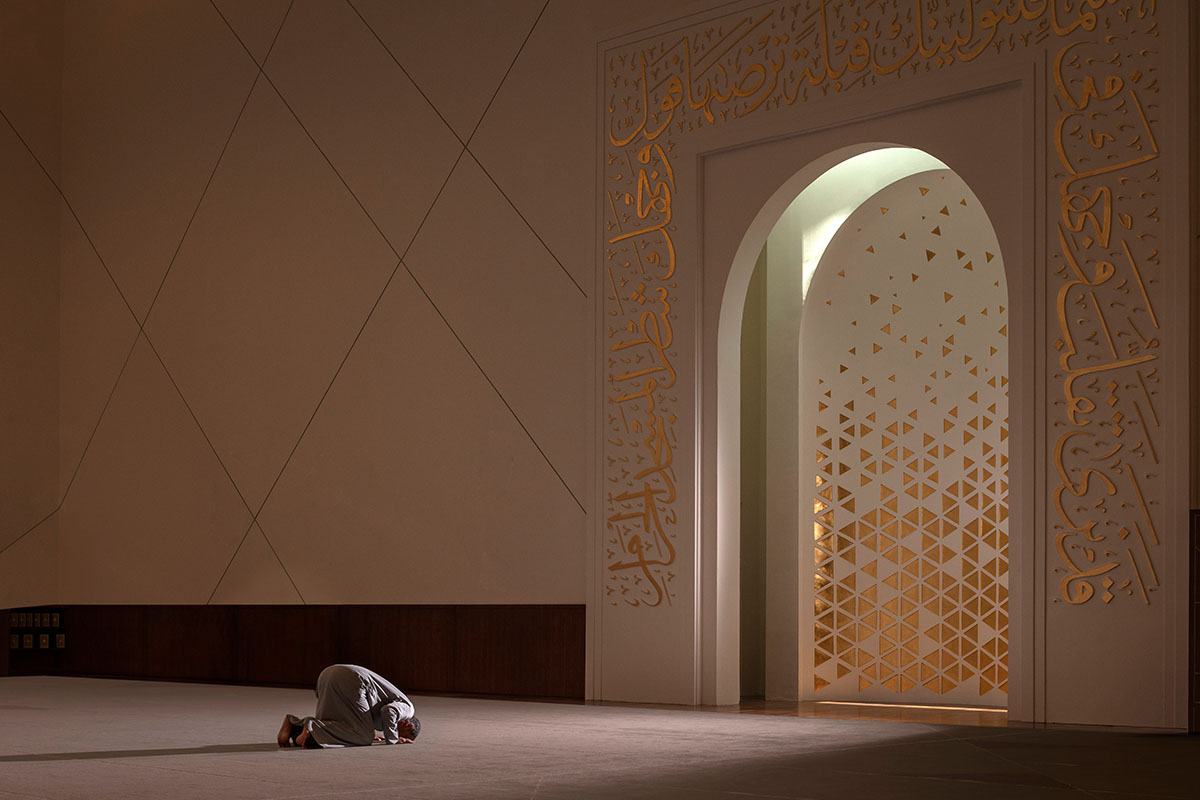 "Muslim prayer is performed throughout the day at prescribed timings: at dawn, midday, afternoon, sunset, and at night. This discipline creates a human connection with the natural day and night rhythm. The experience created through the design of the mosque seeks to enhance this connection through a controlled introduction of natural lighting," explained Sumaya.

This is done in three ways: vertically, via the perforated dome, enhancing the spiritual connection to the heavens, the shafts of light from the narrow openings on the sides further create a sense of illumination from the divine; indirectly, behind the Mihrab, to highlight the point of focus in the prayer hall facing the direction of prayer; and, through a play of light from a series of small openings in the façade that follow the same decorative patterns of the interior. 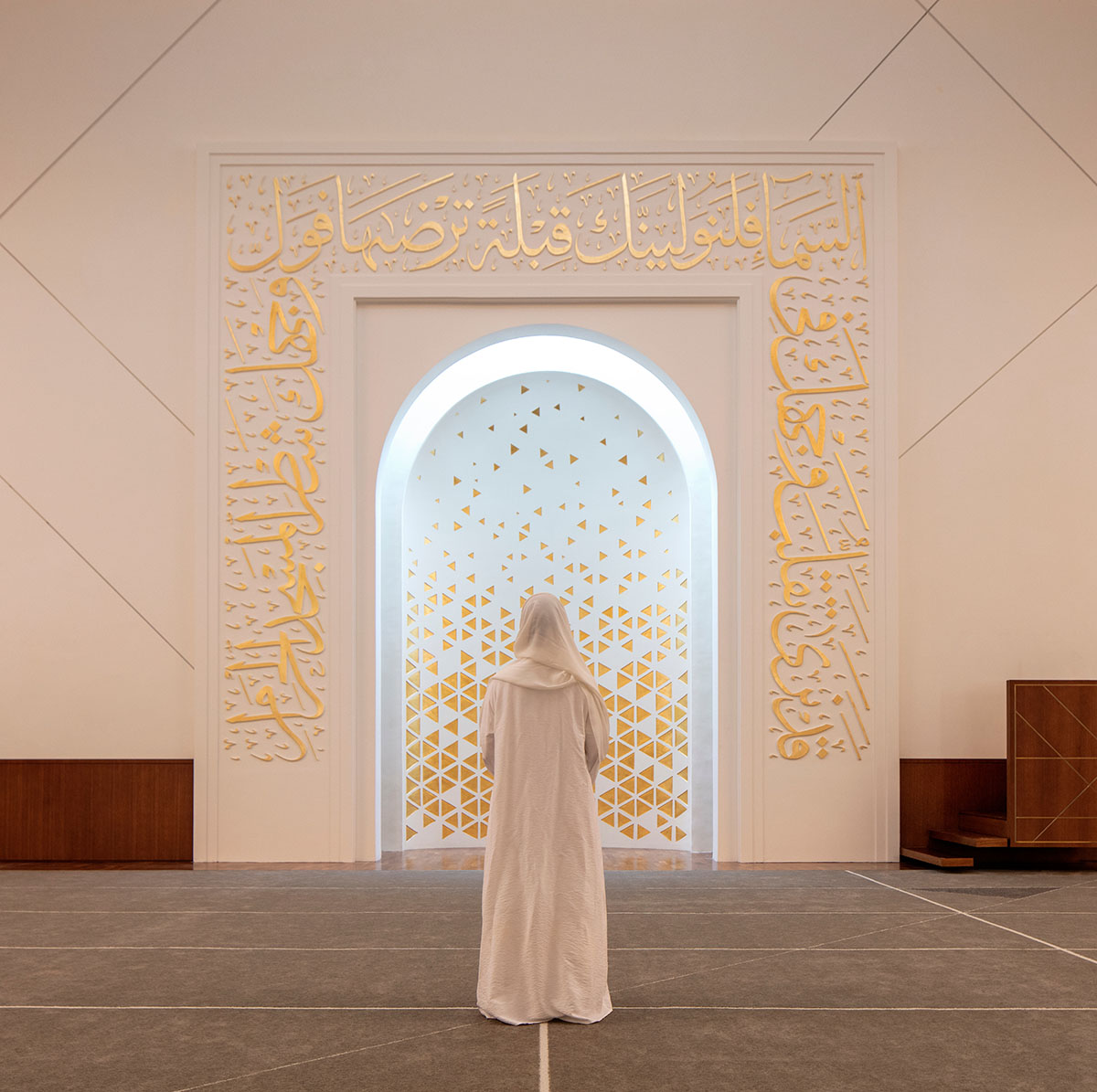 By simplifying the traditional typology of the Islamic form, and stripping it away to its essence, Dabbagh Architects sought to avoid multiple blocks.

In the process of design development, the main building volume was separated into two: firstly, the prayer block containing the male and female prayer areas, and secondly, the service block where the ablution facilities and residence for the Imam (the leader of prayer) and Moazen (caller of prayer) are found.

As a result of this division, a courtyard is formed, with has a sculptural canopy reaching out to reconnect the two volumes together. With its two arms almost touching, the canopy gives a sense of separation of the functional and the more scared: the practicality of the ablution ritual and the spirituality of prayer. In further contrast to traditional mosque architecture, the minaret is designed as a separate volume. 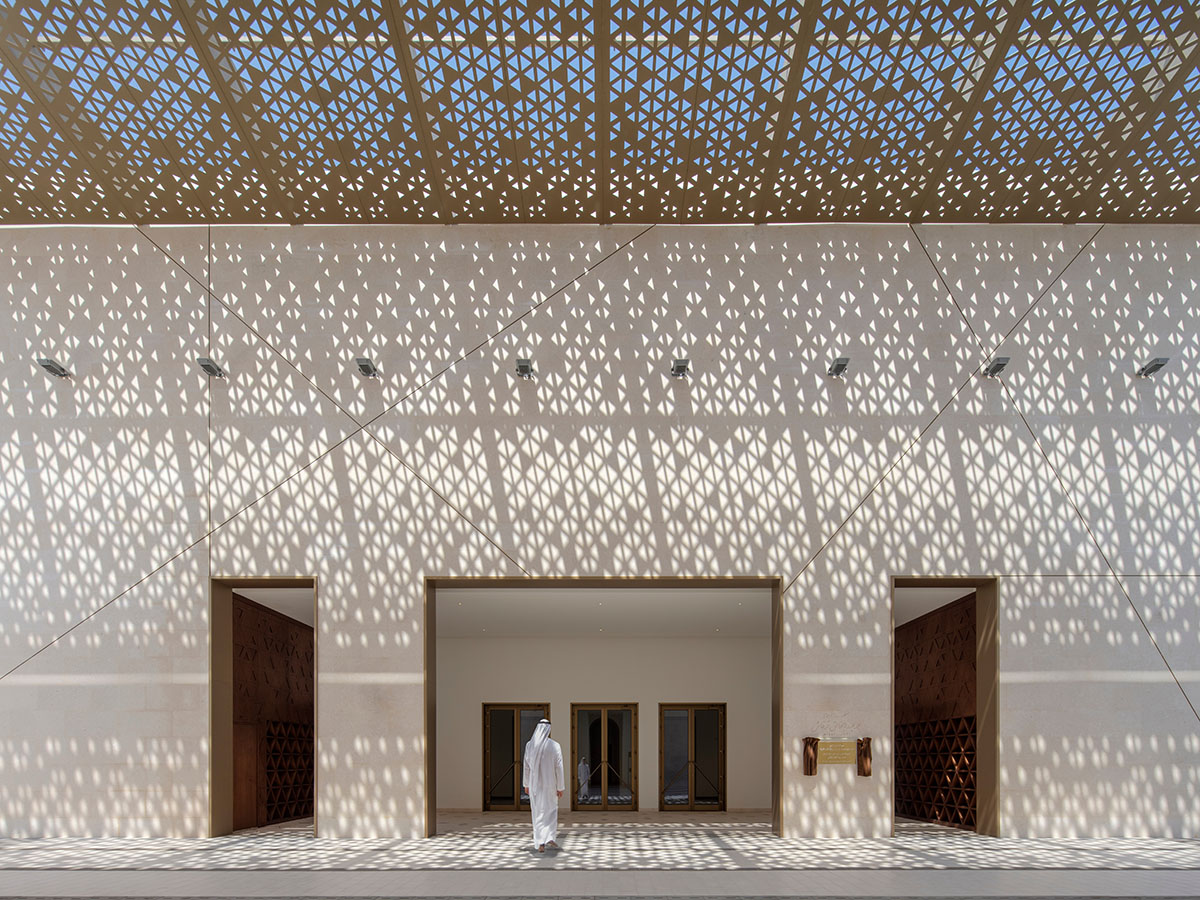 The use of pattern and materiality in this project enhances the user’s experience as they journey from the outside into the courtyard and enter the building.

Throughout the building, a triangular pattern gives reference to traditional Islamic geometry, but reinterpreted in a deconstructed contemporary language. 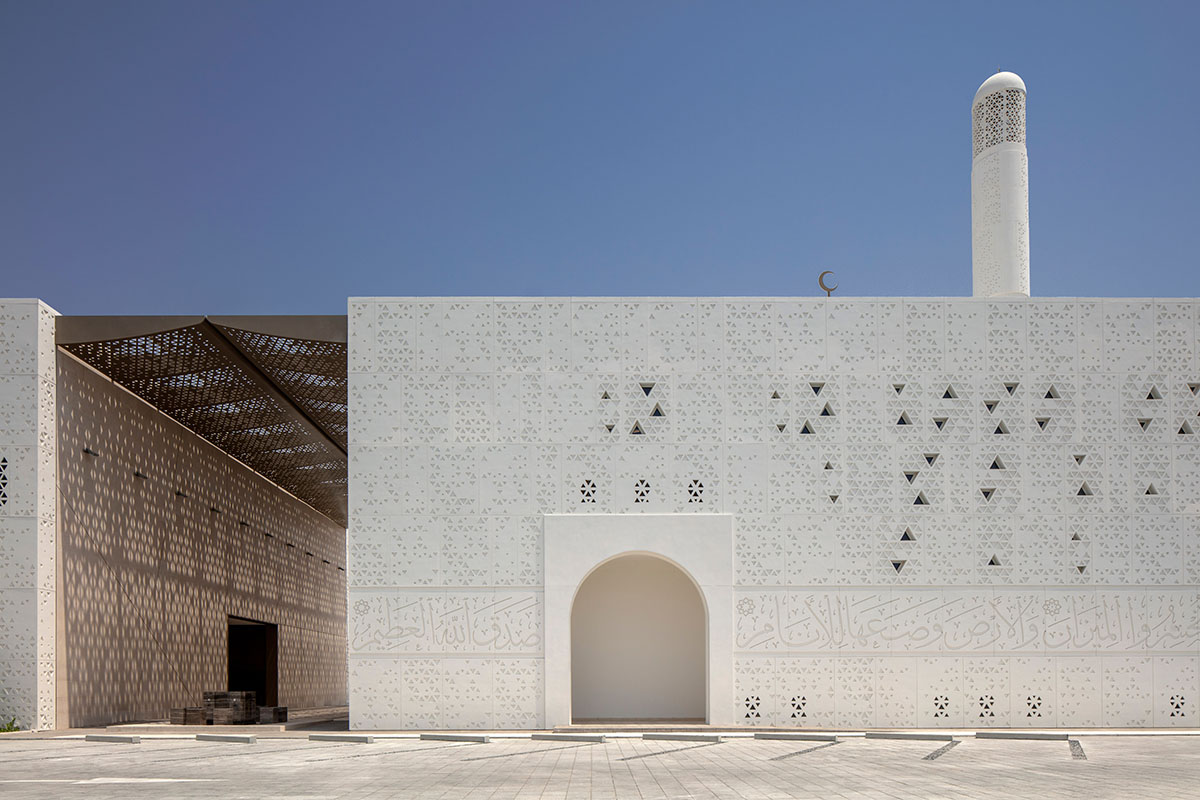 The exterior paneling uses this triangulated pattern in recessed and perforated elements, which gives the building’s skin a dynamic appearance. Internally, these perforations scatter natural light into the areas of worship with great control and care to illuminate the key spaces, and to create a calm atmosphere and sense of connection to the divine, as well as helping to cool the mosque’s interior.

The double skin dome also allows natural light to enter, filtering it through the internal decorative skin, which incorporates the same triangulated pattern as the rest of the building. This filtered light creates a soft, naturally-lit prayer space tailored to the introspective mind during prayer. The reinterpreted Islamic patterns and triangulated geometry harmonize throughout the interior as lines intersecting across walls, carpets, and light fittings. Calligraphy plays an important part in the overall design. A Surah (verse from the Quran) wraps around the prayer hall externally to create a metaphoric protective band, signaling the spiritual nature of the space upon arrival and instilling a sacred energy throughout the building. The verse, “The Most Merciful”, is composed entirely in saj’, the rhyming, accent-based prose characteristic of early Arabic poetry, and references the sun, the moon, the stars and heavens and many other creations.

"At the end of each project, my hope is that the building will evoke the feelings and emotions that were envisioned at the outset. There is a defining, magical moment when the building is born and claims a life of its own. For this, my first mosque, that moment was particularly moving. I feel truly blessed to have had the opportunity to create a sacred space that brings people together for worship" said Sumaya. 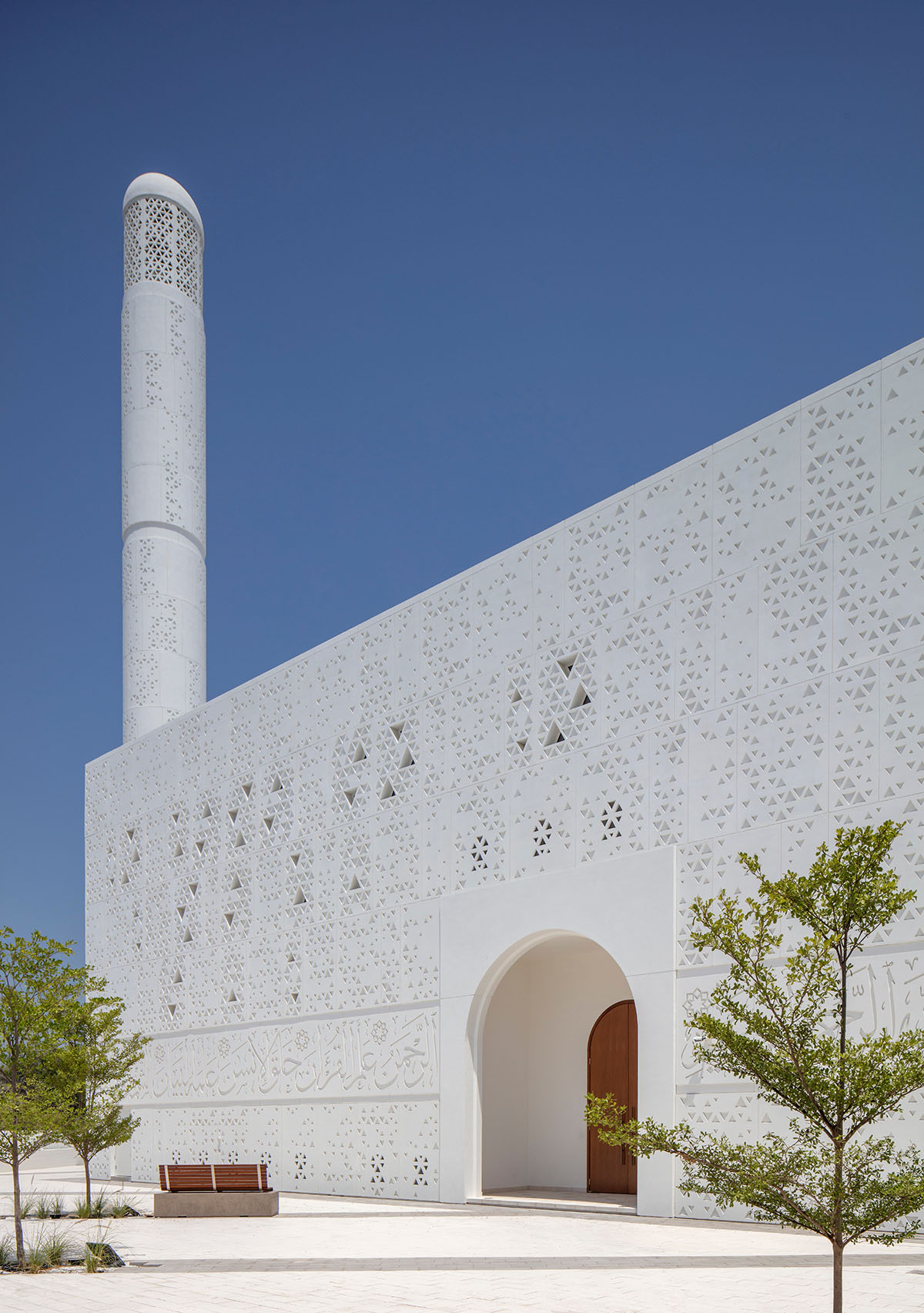