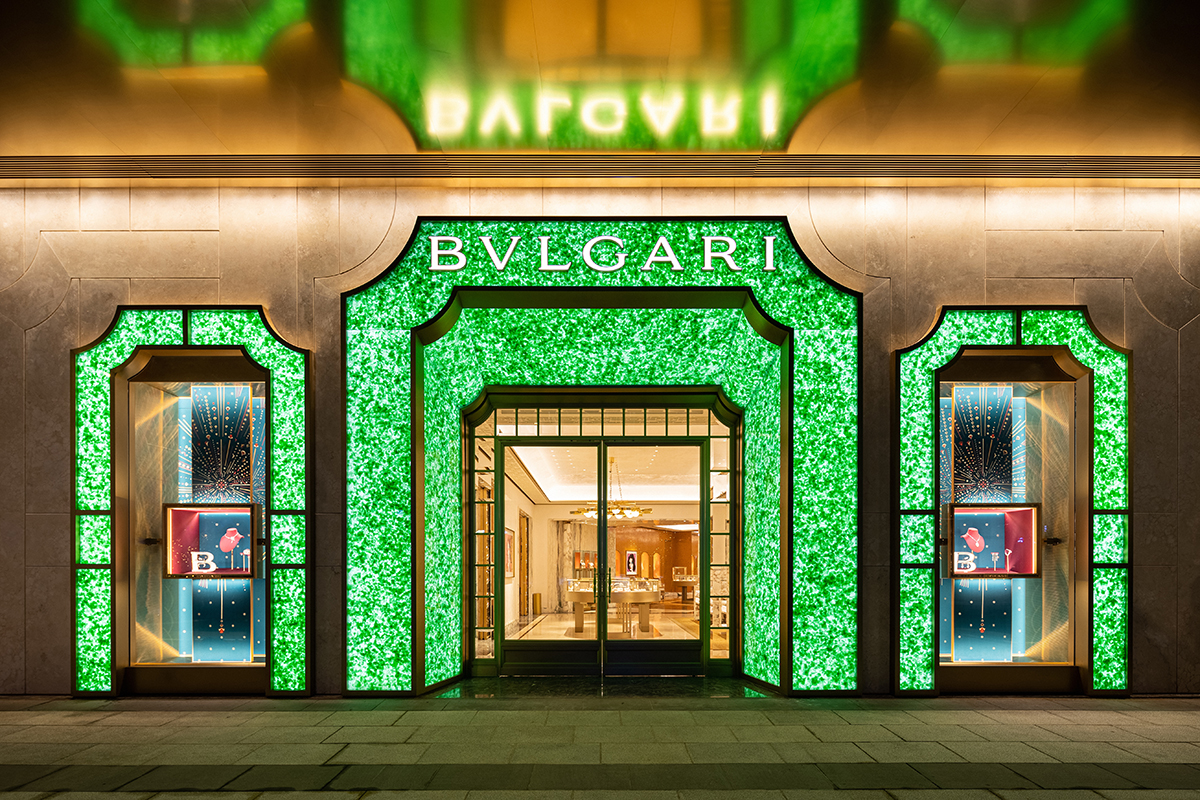 MVRDV has created a green, jade-like façade for its new Bulgari flagship store in Shanghai, China.

Called Bulgari Shanghai, the 274-square-metre store is located in the Shanghai Plaza 66, one of the largest and most popular shopping malls in Shanghai which is now the home of a new Bulgari flagship store at Shanghai’s Nanjing Road.

MVRDV is inspired by a medley of influences, from the original Bulgari store in Rome to Shanghai’s unique Art Deco architecture to create this luminous façade that pays homage to the heritage of both Bulgari and Shanghai. 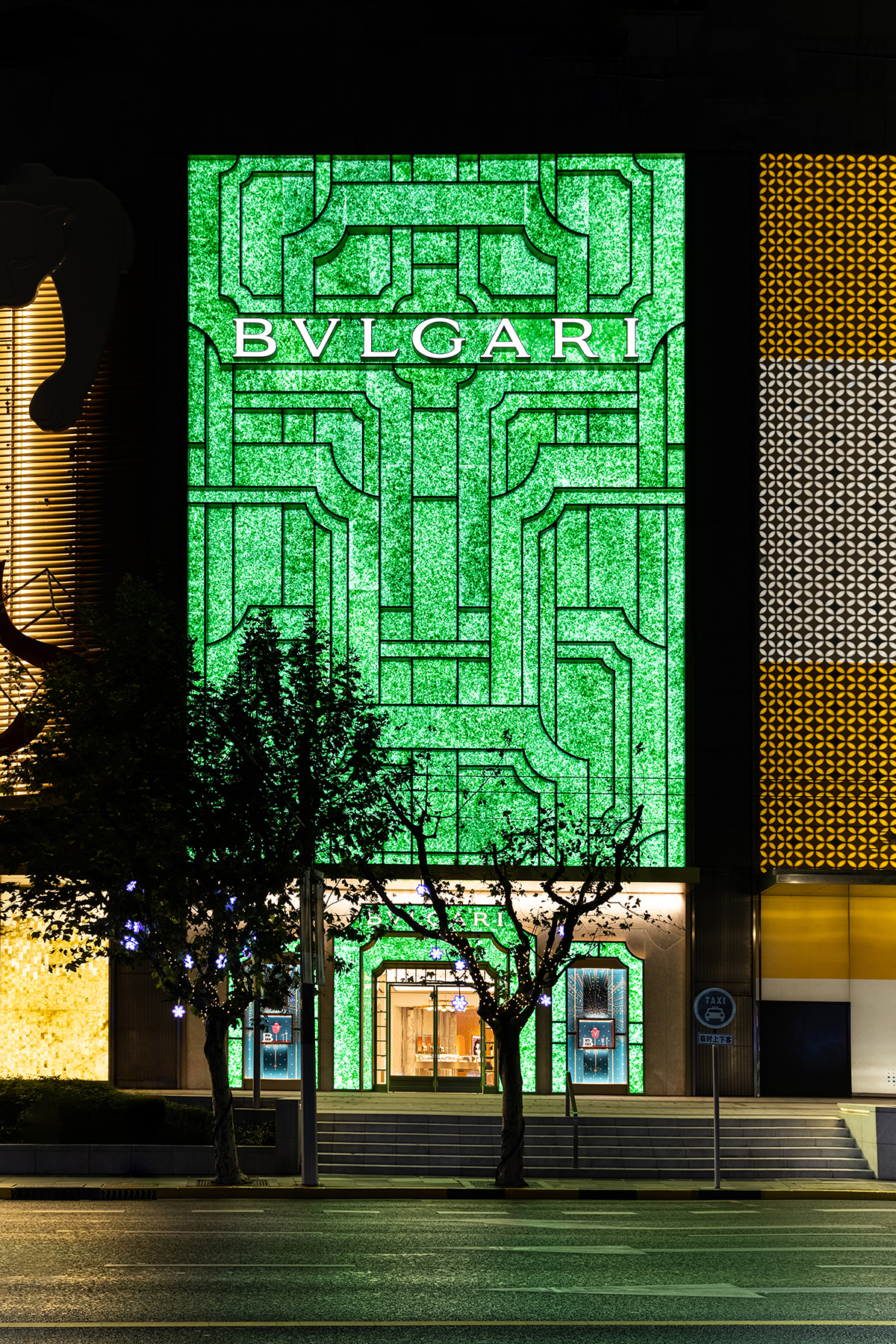 Based on the circular design principles of the firm, the façade is made of brass and recycled champagne, beer, and other glass bottles by using a visual motif.

This motif is inspired by the portals and cornices of Bulgari’s first original boutique on Rome’s Via dei Condotti - adopting the recognisable visual identity that now distinguishes their stores worldwide.

Bulgari Shanghai is completed as the third flagship store façade in MVRDV’s ongoing partnership with the luxury Italian jewellery brand. Previously, in 2018 Bulgari Kuala Lumpur opened with a marble-inspired façade illuminated by veins of gold light. For this effect, glass-reinforced concrete was cut according to the cornice pattern, filled with resin, and illuminated by amber LED Lights.

In 2020, MVRDV completed Bulgari Bangkok, where the cornice pattern was created in brass and combined with different types of glass to give a striking jewel-like effect. Subtle lighting in each window highlights the store’s products in Bulgari’s signature saffron colour. 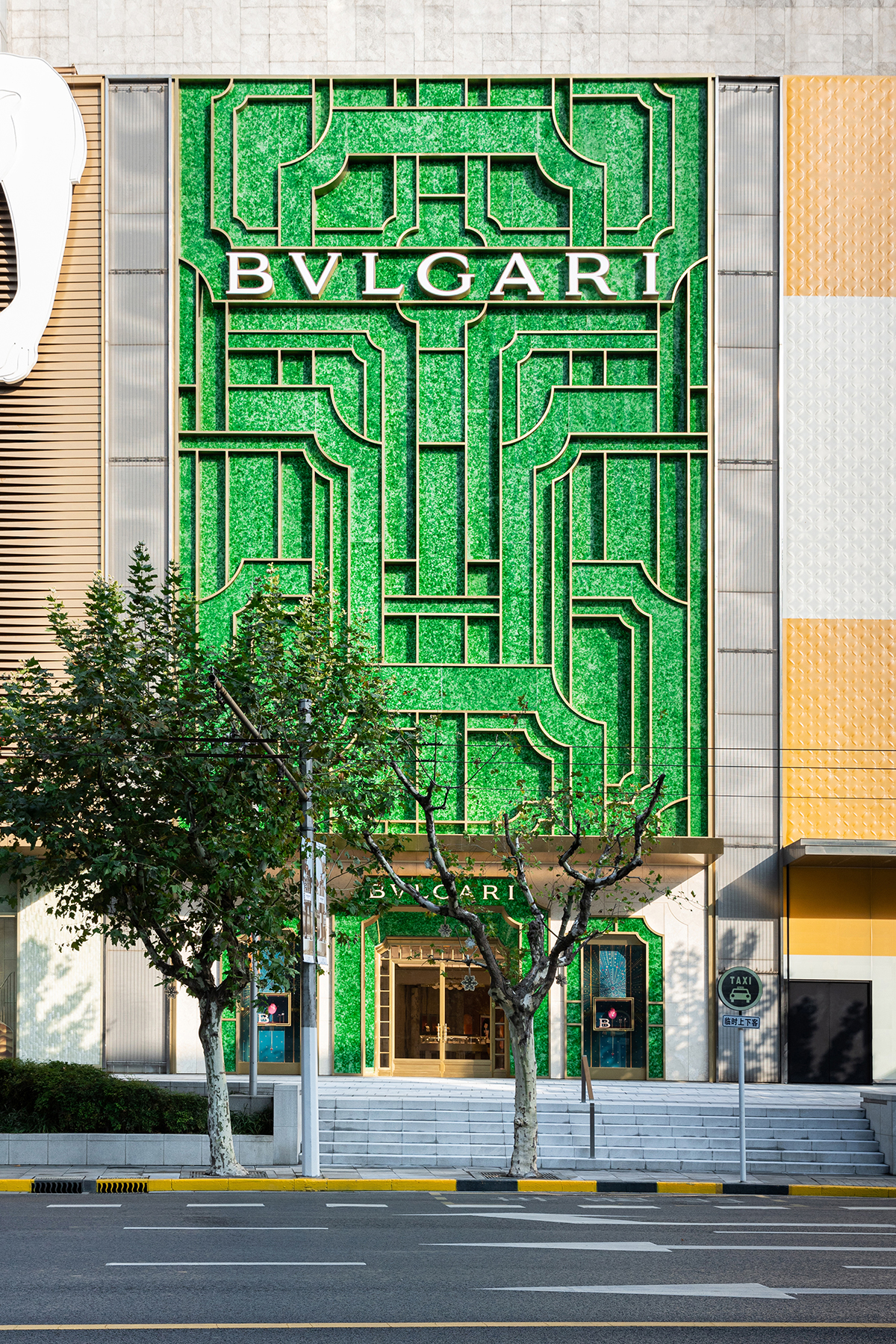 Emerging as an innovative and sustainable design, MVRDV combines the identity of the brand and contextual references in a new design by using unique textural quality of the glass.

"In a twist on the previous designs, this motif is not used to form windows in the façade. Instead, the Shanghai façade is mostly windowless, and the cornice motif is employed in layered panels that form an Art-Deco-inspired pattern," said MVRDV.

"Art Deco is a theme that Shanghai and Bulgari have in common: the Chinese city’s status as a key port connecting East and West in the early 20th century gave it a rich tradition in this architectural style, while Bulgari’s Déco collection characterised its jewellery in the same period."

"To close this circle of inspiration, the façade takes on the materiality of fine jewellery with panels that resemble China’s most precious stone, Jade," added the firm. 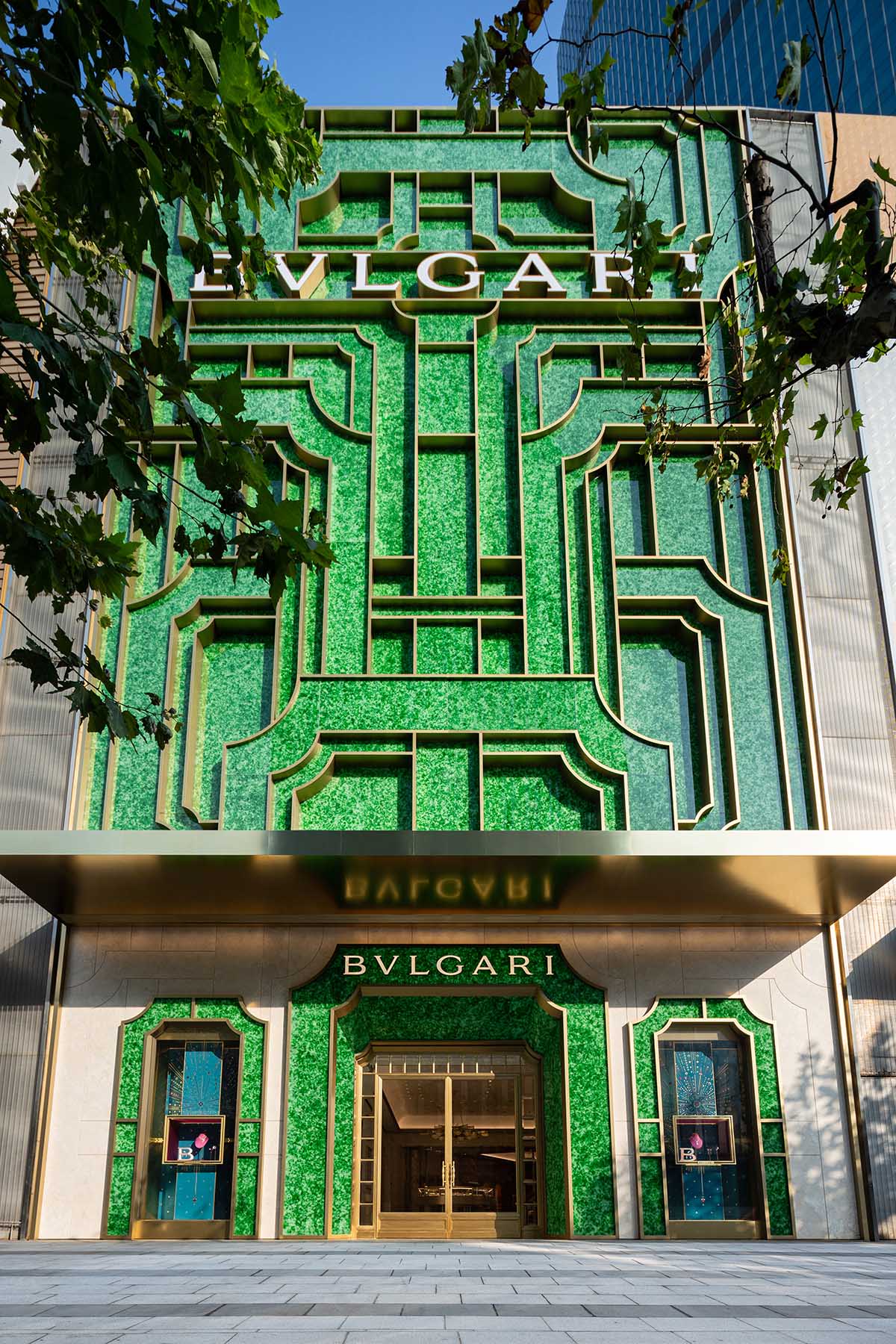 MVRDV's complex design, with layer upon layer of cross-cultural references includes Art Deco architecture with a jewellery-like quality, combining the best of Eastern and Western culture. The gold-coloured brass trim gives the façade an appearance like jade jewellery.

In the making process, the panels are made of compressed green glass, a unique material effect that creates a translucent finish. At night, a backlight behind the panels gives the façade a striking glow, highlighting the unique textural quality of the glass.

The glass used on the façade is completely recycled and was produced at the Magna factory in Teutschenthal, Germany, which specialises in glass treatment.

According to MVRDV, the project demonstrates the potential of sustainable recycled materials, even in luxury contexts, and takes one step towards MVRDV and Bulgari’s goal of store designs that are built using 100 per cent circular economy materials. 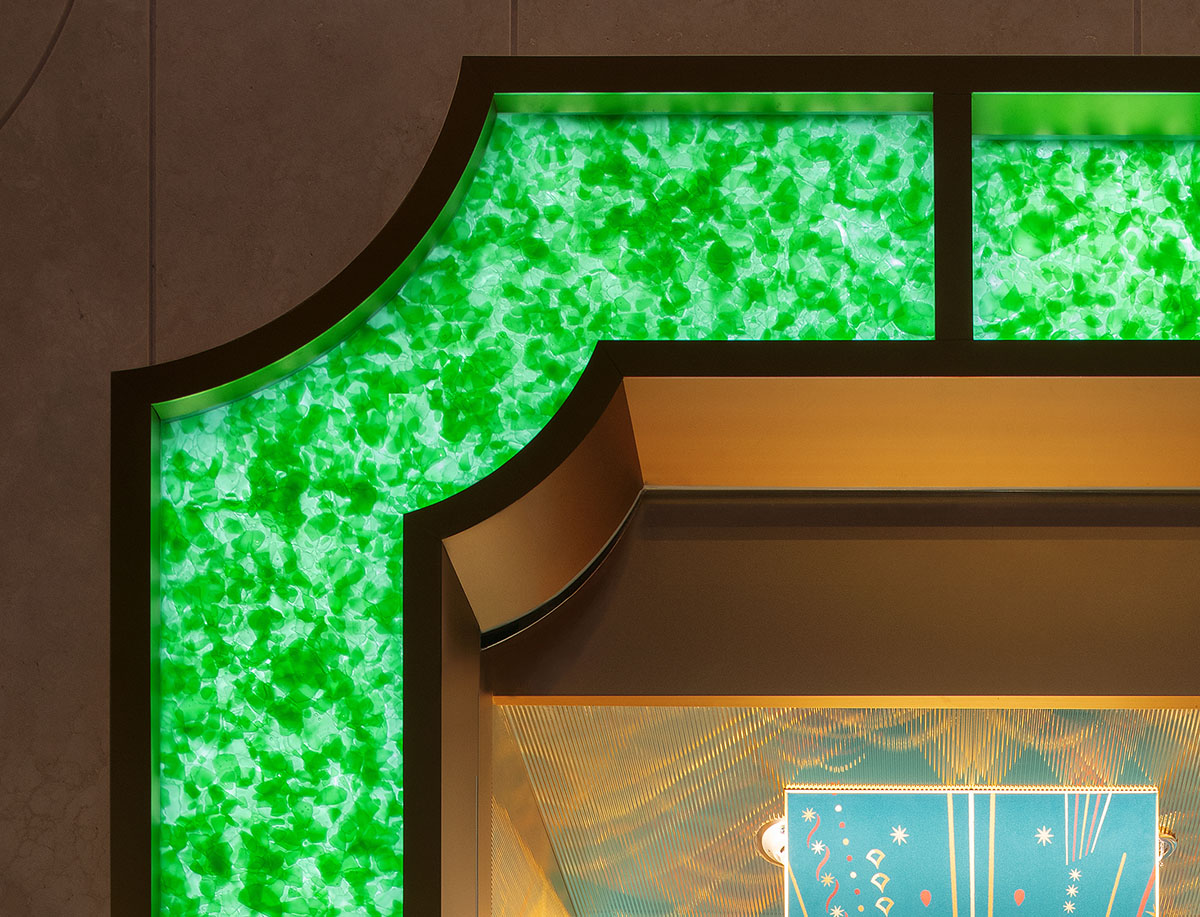 Meanwhile the backlight is engineered to minimise the façade’s energy footprint, using less than half the energy of a typical comparable installation.

"It’s a passion we share with them, albeit in different design disciplines. The Shanghai store encapsulates the value of these experiments: given the right treatment and detailing, leftover champagne and beer bottles, which would otherwise be thrown away, become a jewel for the city."

Watch MVRDV's video showing the design process of the Bulgari store in more detail below.

MVRDV recently completed the transformation of a former factory in Shenzhen into a creative hub. The firm revealed design for blue-colored letter-shaped apartment building in Mannheim.