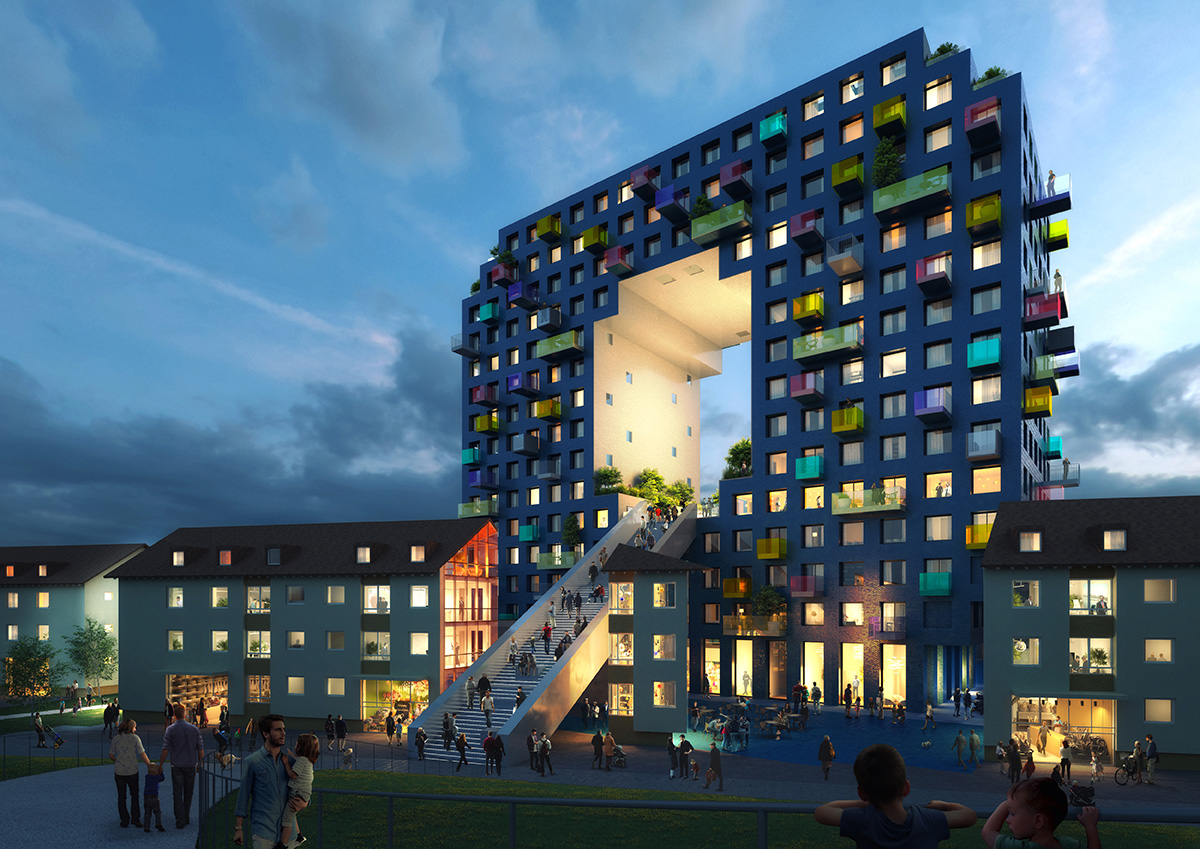 Called The O, the 15-storey building will form one of the standout elements of Mannheim’s Franklin Mitte neighbourhood, Germany.

Comprising 120 apartments consisting of ground-level commercial units and a bar and terrace, the apartment presents a playful shape with its pixelated blue brick façade. The building also functions as a local landmark, and a key contributor to the character of the neighbourhood at large.

At the centre of the ‘O’, there will be a 4th-floor public terrace accessed by a public stairway inviting visitors to the building. 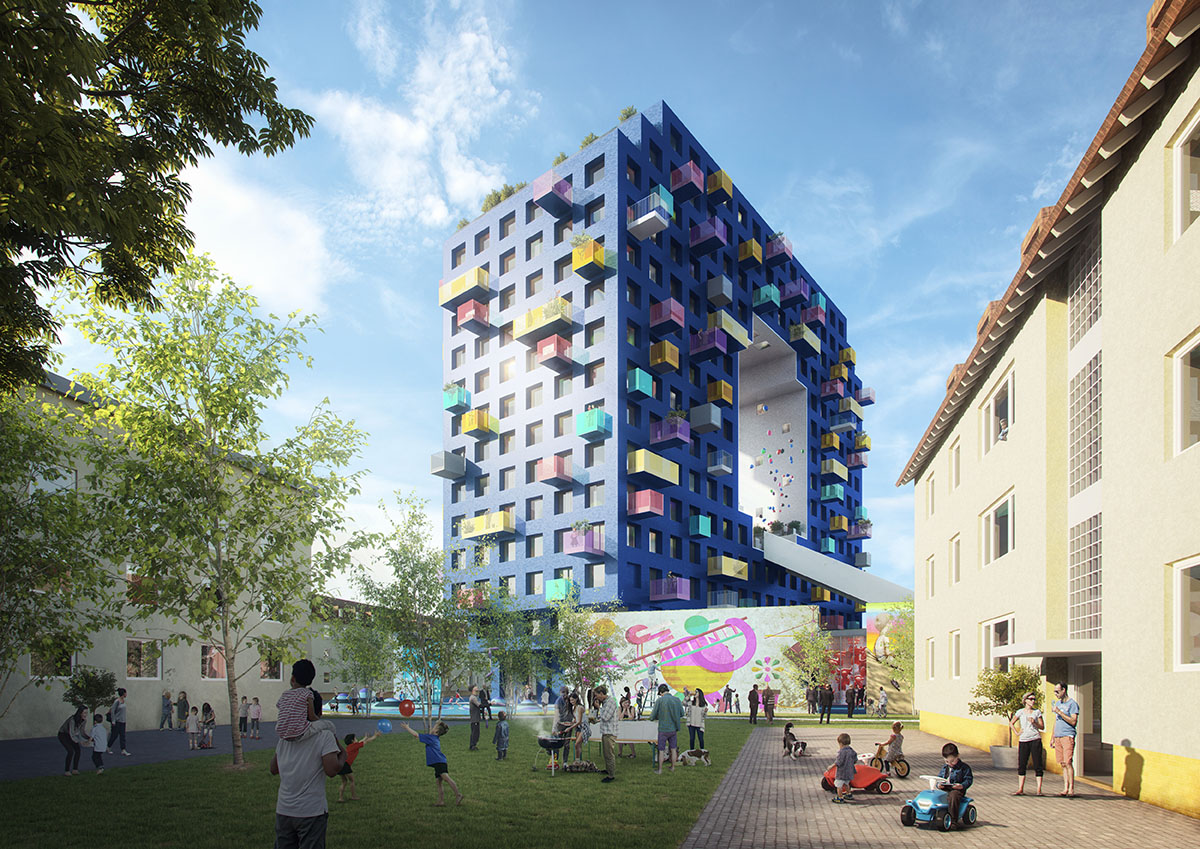 Franklin Mitte is one of a number of neighbourhoods being realised in the sustainable transformation of the former Benjamin Franklin US military barracks.

The masterplan for Franklin Mitte, which was revealed in 2017, combines a mixture of different building types and uses on a 41-hectare site, incorporates a number of elements from MVRDV’s masterplan proposal for the same site.

These include the "Europa Axis" that cuts a straight path through the neighbourhood, the walkable "Green Hill" that provides a viewpoint at the heart of the neighbourhood while housing a supermarket, doctor’s clinic, and pharmacy, and four high-rise buildings in the shape of capital letters that spell the word “HOME”. 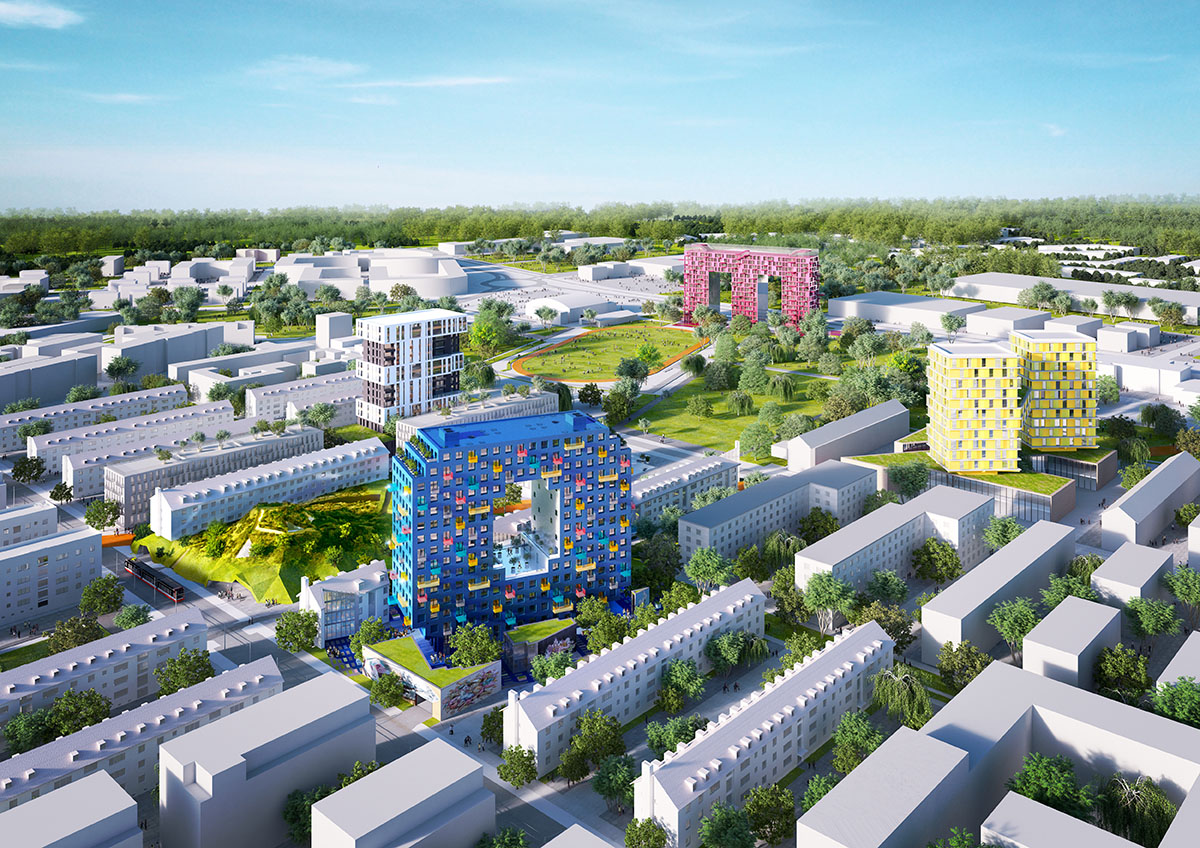 The ‘O’ in HOME will be next to the Green Hill, with the development comprising the high-rise itself and a number of adjacent low-rise buildings.

It will be one of the tallest buildings in the neighbourhood, the ‘O’ apartment is derived from its surroundings, and as MVRDV states, its strong presence is highlighted by its blue brick façade and the balconies that dot its exterior with brightly coloured glass balustrades.

With these balconies, almost all apartments in the project are given direct access to outdoor space. 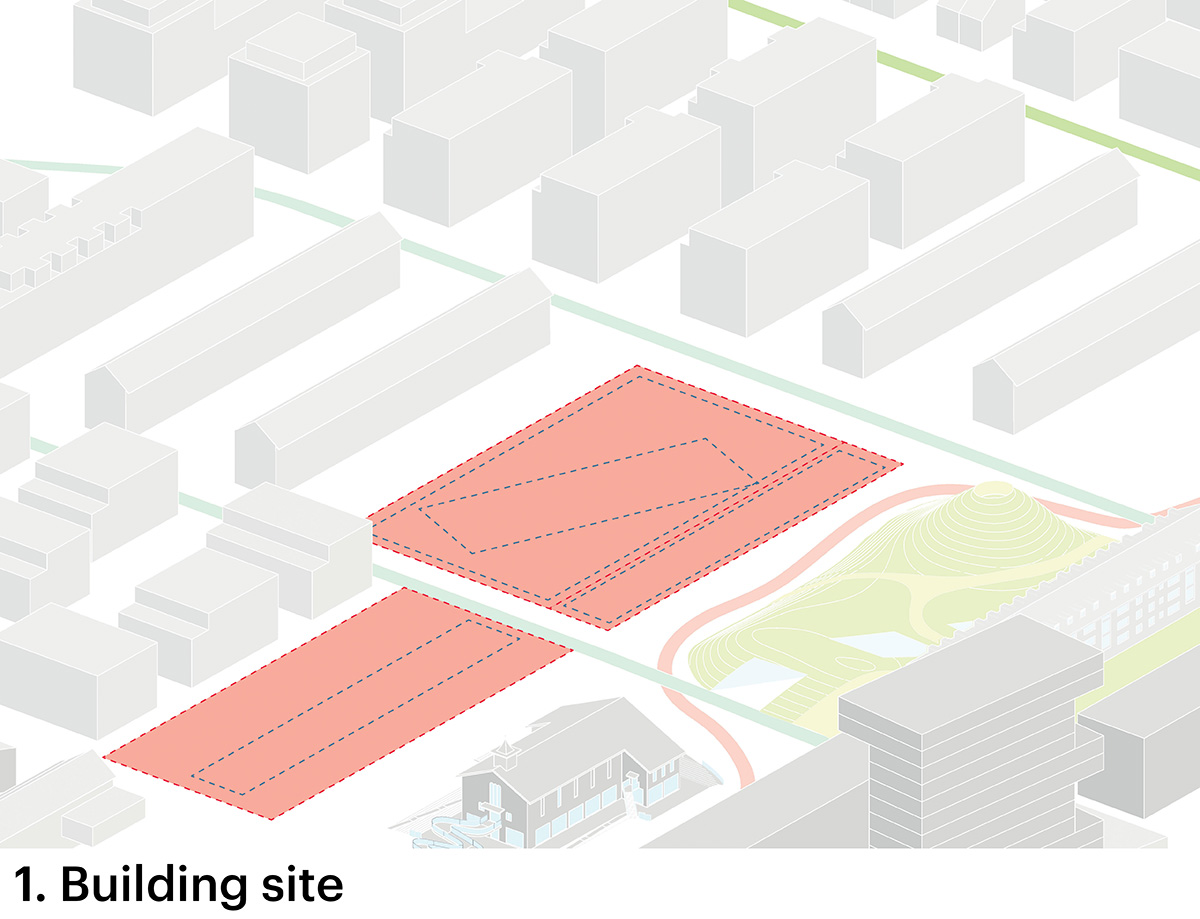 At the centre of the ‘O’ there will be a public terrace that can be accessed by a public stairway, this terrace will function as a “living room” for the area, offering views over the neighbourhood and providing a grand entrance route to the bar located inside the building’s 4th floor.

MVRDV emphasized that "together with the Green Hill, this podium will soon become an ideal event location with viewers able to watch a show taking place on top of the hill."

"By itself, the ‘O’ is an exciting and friendly building at the heart of Franklin Mitte, with terraces and plazas that embrace the liveliness that is coming to this area," said MVRDV founding partner Winy Maas.

"But it is even more exciting in how it becomes a part of the city. Working with the H, M, and E buildings, it will give Franklin Mitte a strong, unique identity: Welcome!." 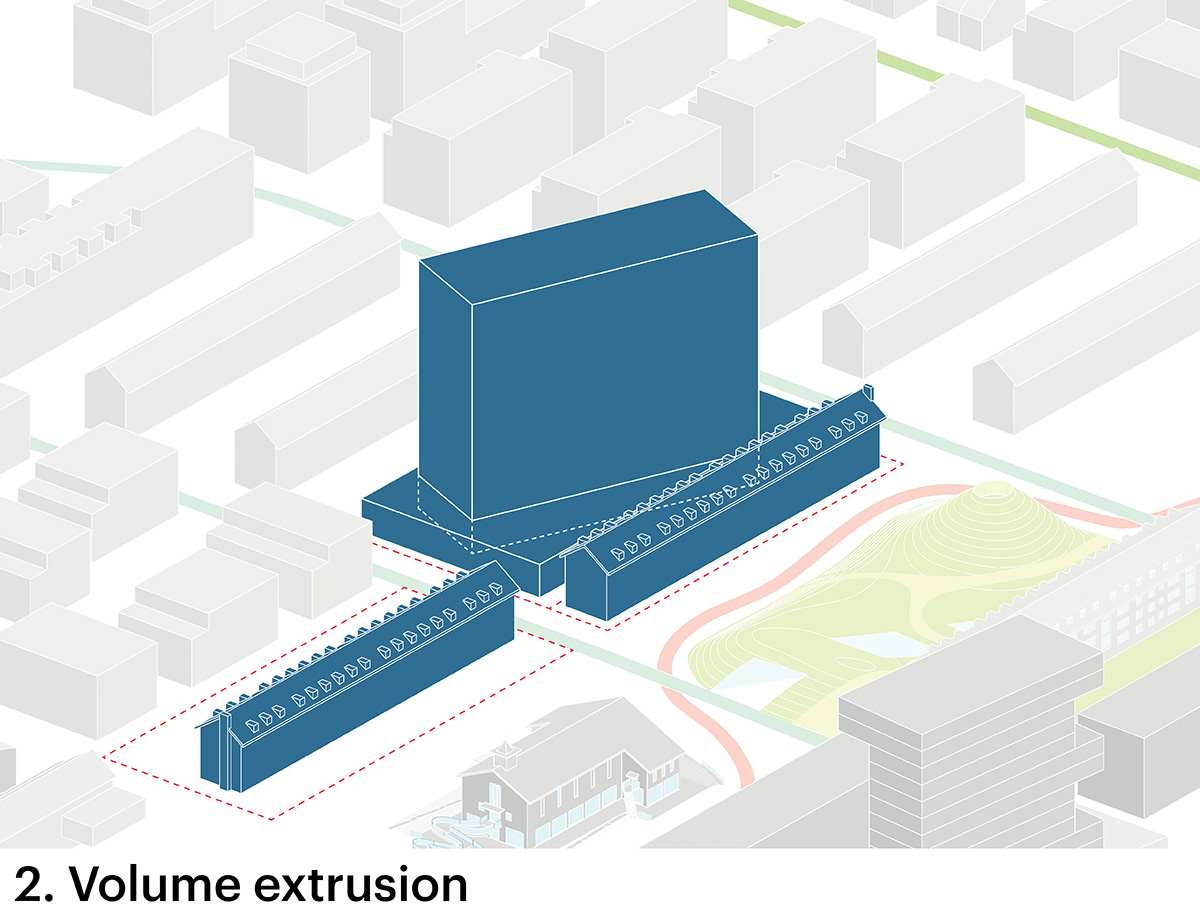 At ground level, the apartment is surrounded on all four sides by plazas, as required by Germany’s clearance area legislation. "In a playful – yet educational – response to these rules, MVRDV’s design for the plazas applies them as literally as possible, creating a projection of the building’s elevations on each side," added MVRDV.

Giving the ‘O’ shape and with a gridded façade, the building will be visible in the layout of the plazas, according to the firm, it will encourage residents and visitors to contemplate the laws that give form to the city around them. 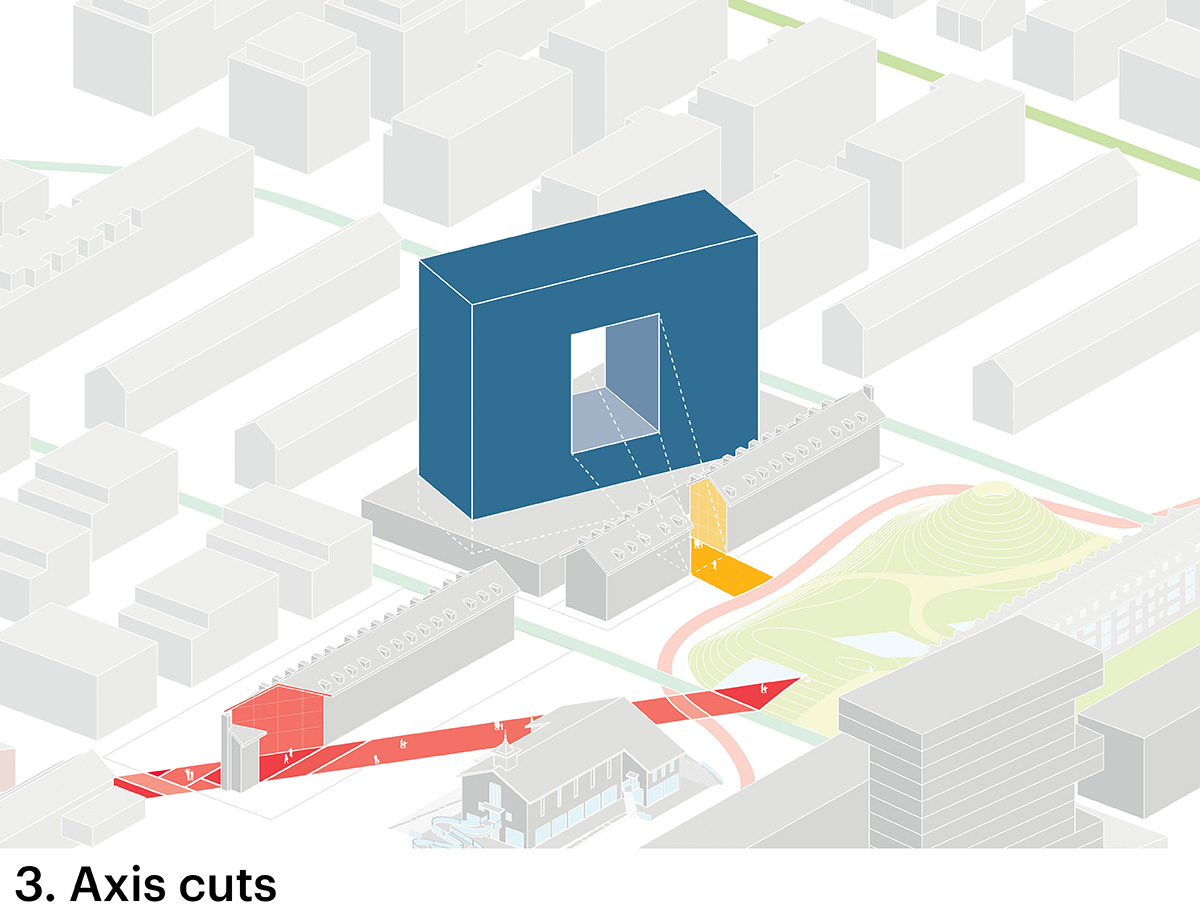 Next to the ‘O’, there are low-rise buildings based upon the long, four-storey residential buildings on the site that were part of the military barracks and have since been demolished. MVRDV’s design will rebuild these blocks, and “cut into” their familiar forms according to the logic of the plan.

"One block is cut into three parts by the staircase accessing the 4th-floor terrace and the clearance area regulations, while the second block, standing at a slight distance, is cut into two pieces by the masterplan’s Europa Axis," the firm added.

"Where the buildings have been ‘cut’, the stucco façades give way to glass walls. The intersections thus reveal the buildings’ interior spaces, used by public functions such as a library and commercial functions." 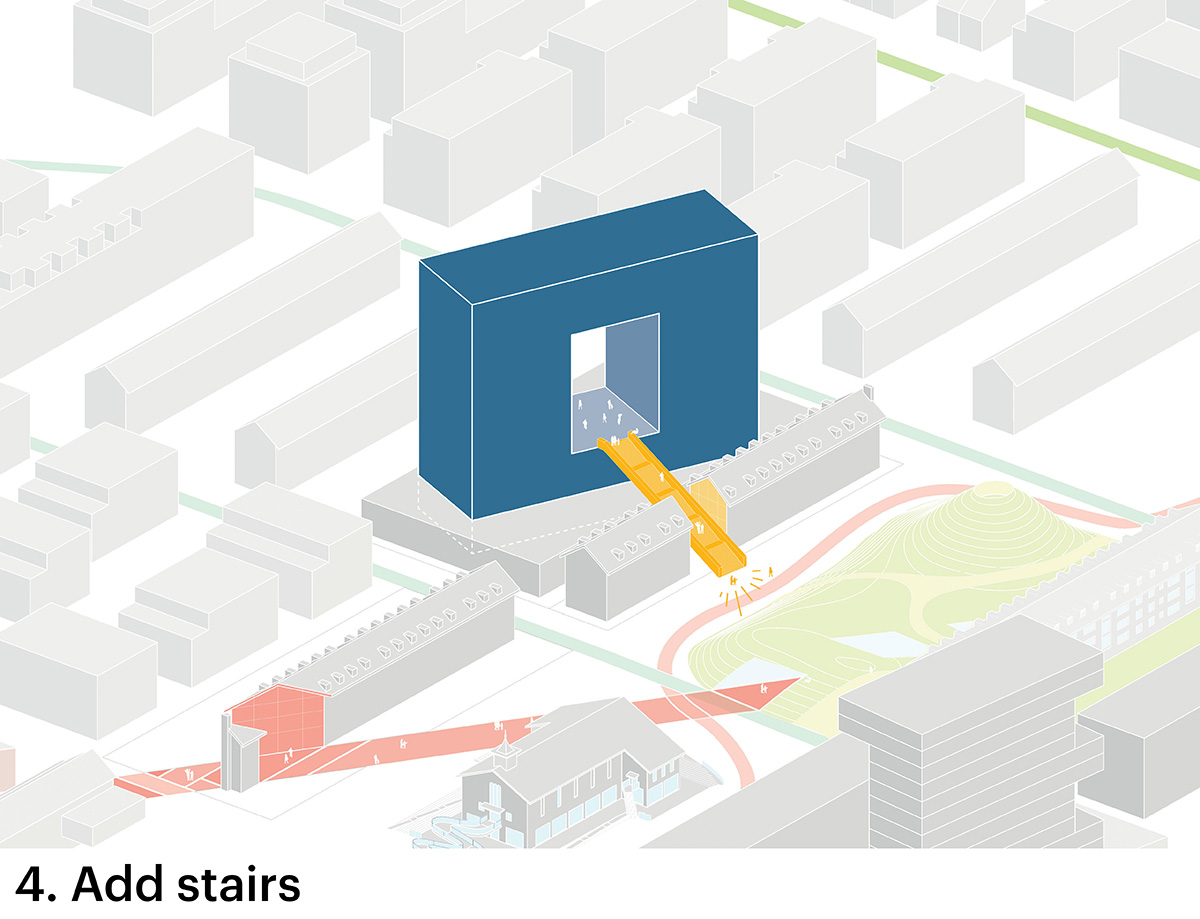 Thanks to their balcony access, all apartments in the ‘O’ Highpoint are provided with ample natural ventilation, while the windows are set deep within the façade to reduce excess solar heating.

Alongside the second barracks block, a “forest plaza” contrasts the urban nature of the plazas around the high-rise, adding an oasis for biodiversity to the neighbourhood. 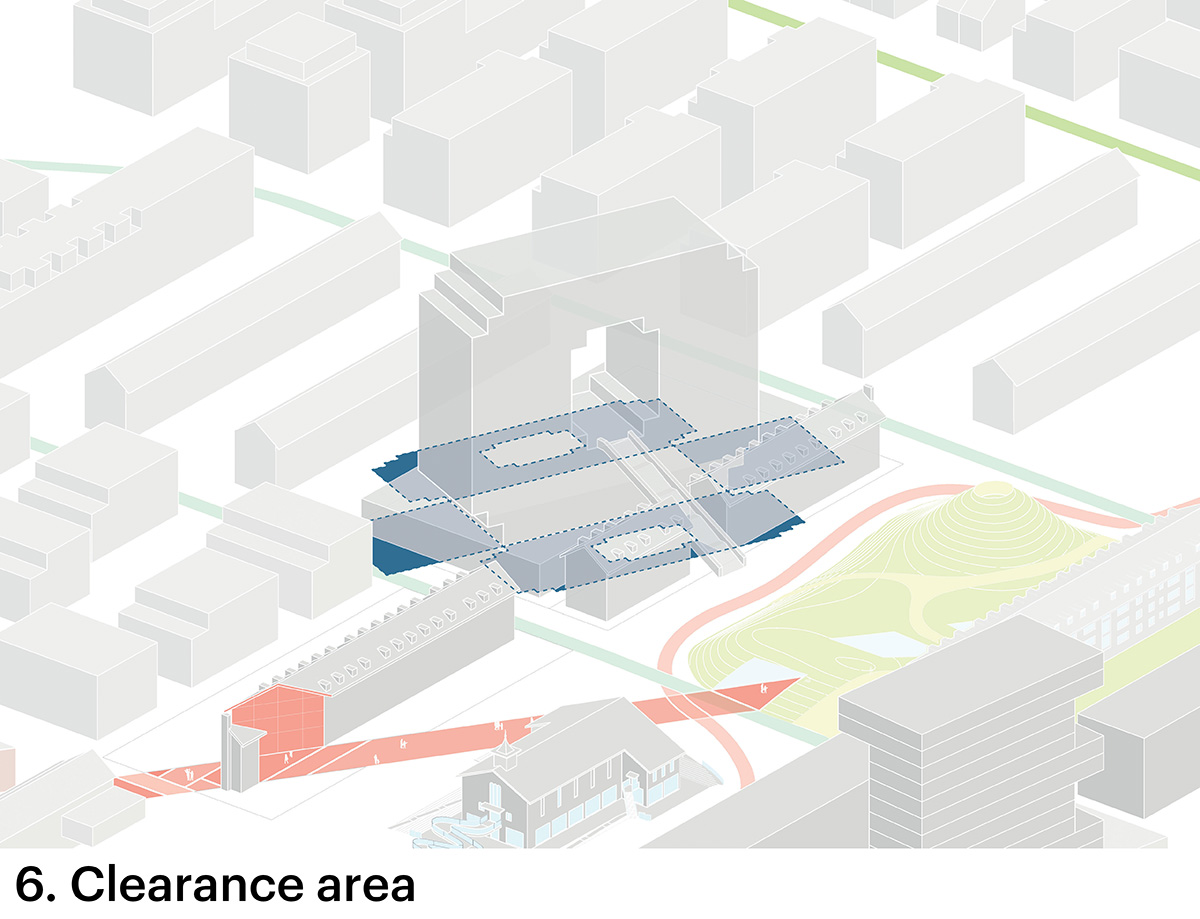 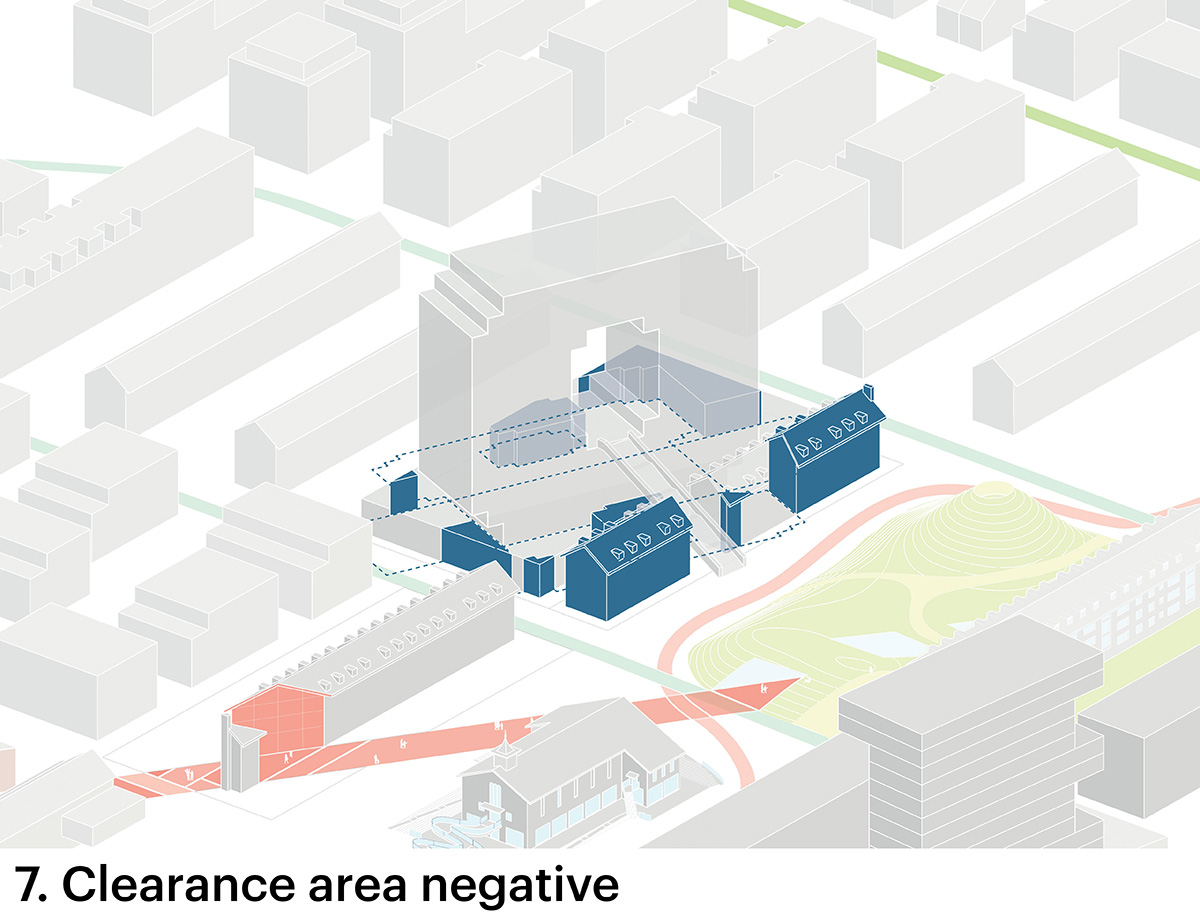 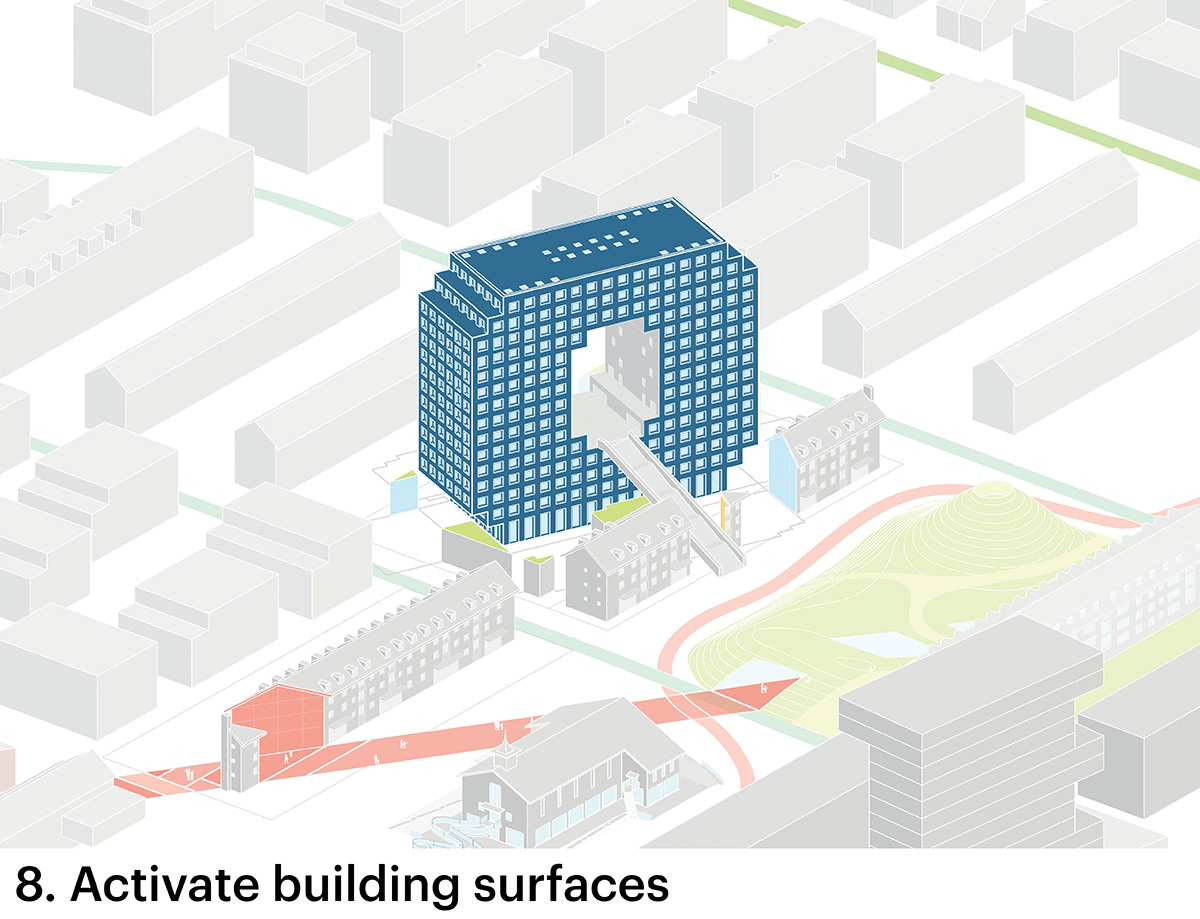 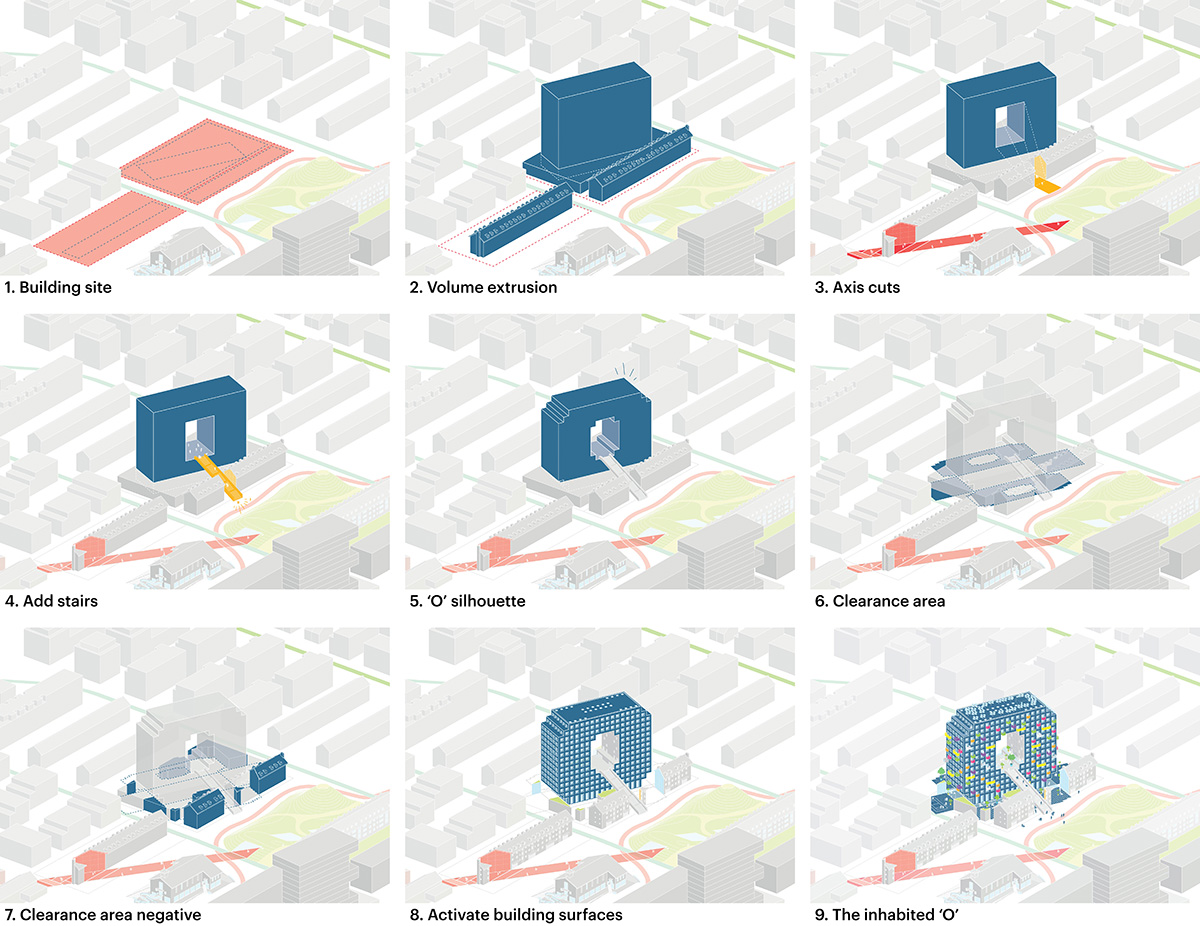