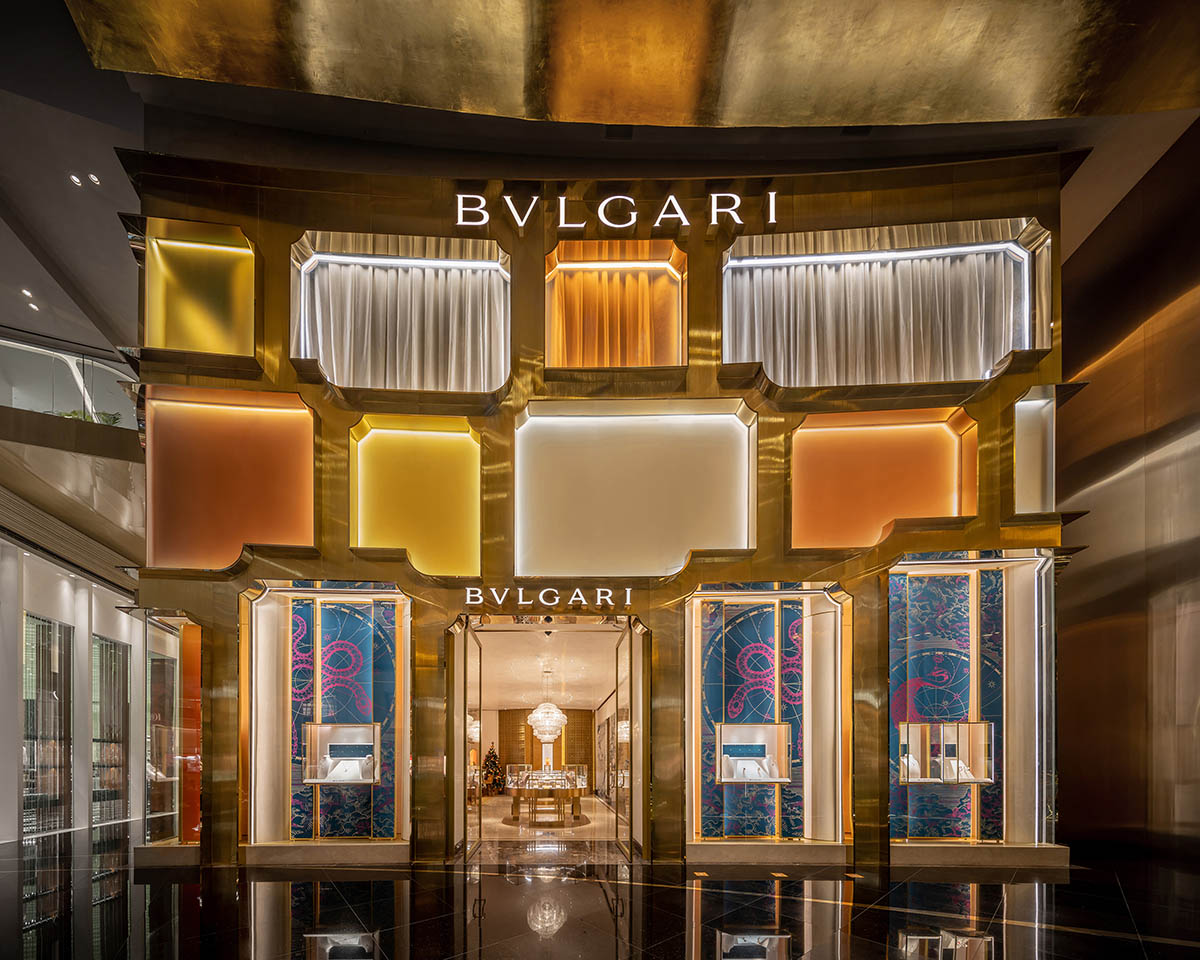 MVRDV has completed a new flagship store for the Italian luxury brand Bvlgari with a golden and patterned façade in Bangkok, Thailand.

The new store, named Bvlgari Bangkok, is located in the IconSiam department store – one of the largest malls in Asia, the new project is the second store in a series of façades designed by MVRDV for the luxury brand, following a store in Kuala Lumpur that opened in 2018.

MVRDV said that "The Bangkok store opened last year with a spectacular party and, now that corona measures in Thailand have been relaxed, visitors can shop again to their heart's content."

Inspired by the timeless beauty of Roman art, the façade is made of high-quality materials such as natural stone, tinted glass, copper, and gold as a basis. 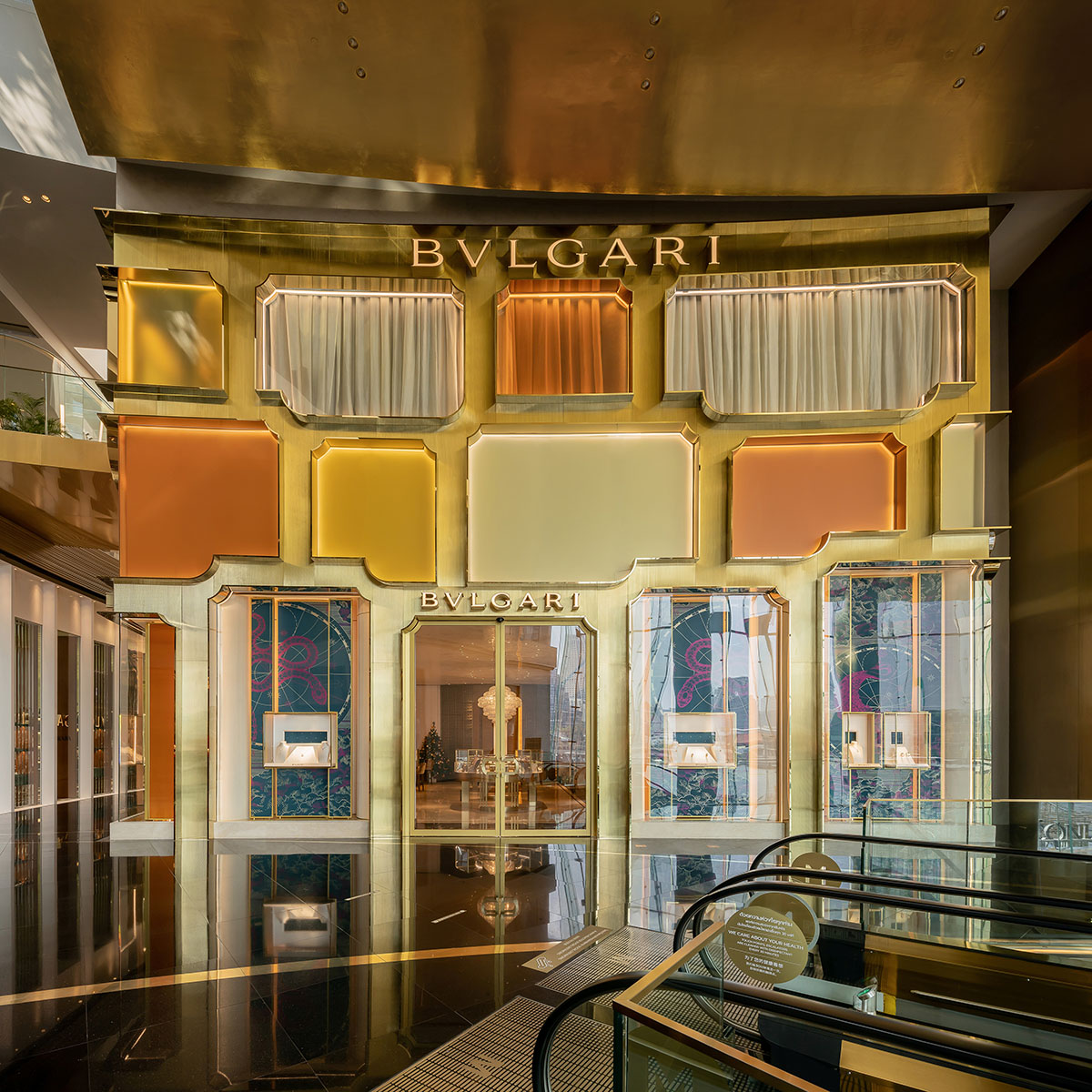 The store's windows feature varying colours and degrees of transparency, tailored to the functions behind them.

MVRDV was tasked with rethinking the façade designs for new Bvlgari stores, adding a contemporary touch to their classic image.

"The Italian brand has stood for glamour and creativity for more than a century, inspired by the timeless beauty of Roman art," said MVRDV.

Taking this heritage as a starting point, MVRDV’s designs took inspiration from the portals and distinctive cornices on Bvlgari’s very first store in Rome, located on Via dei Condotti since 1905. 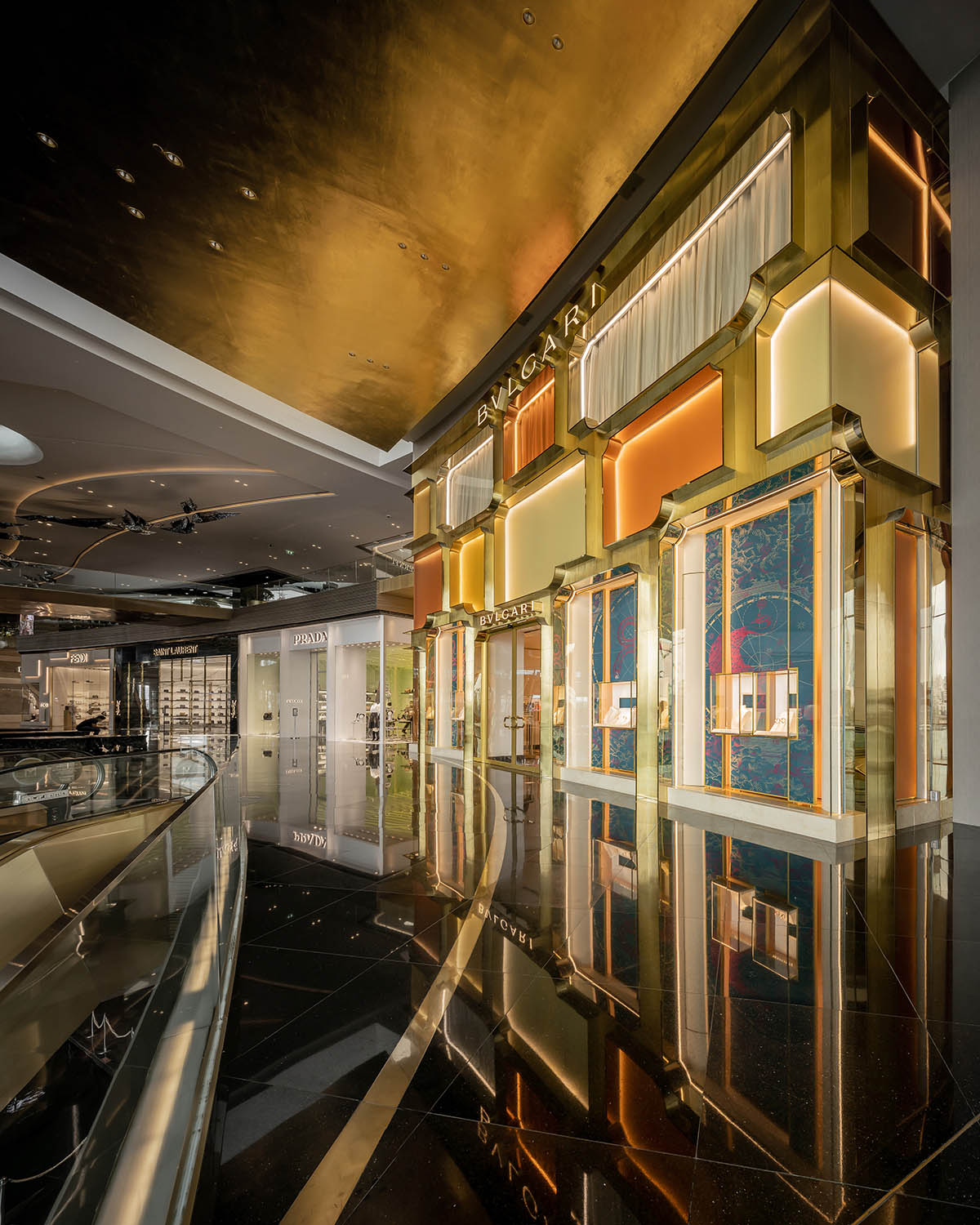 MVRDV has developed a special motif in the form of a cornice which is used a common feature by MVRDV seen across the Bvlgari façades, this motif is deployed in a variety of combinations that allowed MVRDV to experiment with asymmetric patterns and innovative materials. 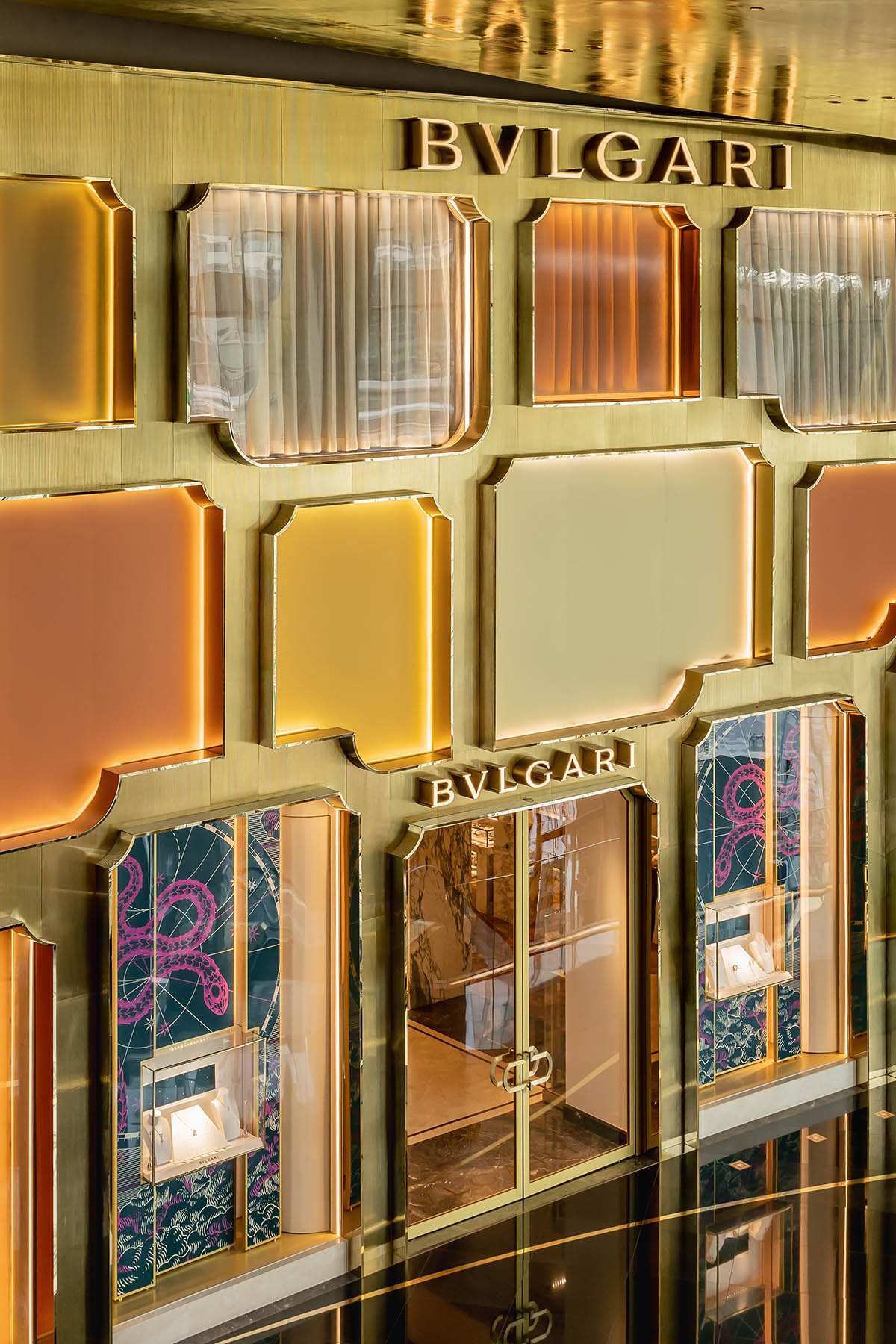 The firm completes this cornice pattern façade in brass combined with different types of glass, giving a golden effect and creating a striking impression for visitors ascending the mall’s escalators, which end directly in front of the Bvlgari store.

"With this design, we bring a Roman zest for life to Bangkok," said MVRDV founding partner Jacob van Rijs.

"We are working on several Bvlgari stores simultaneously, always making sure that we use high-quality materials such as natural stone, tinted glass, copper, and gold as a basis." 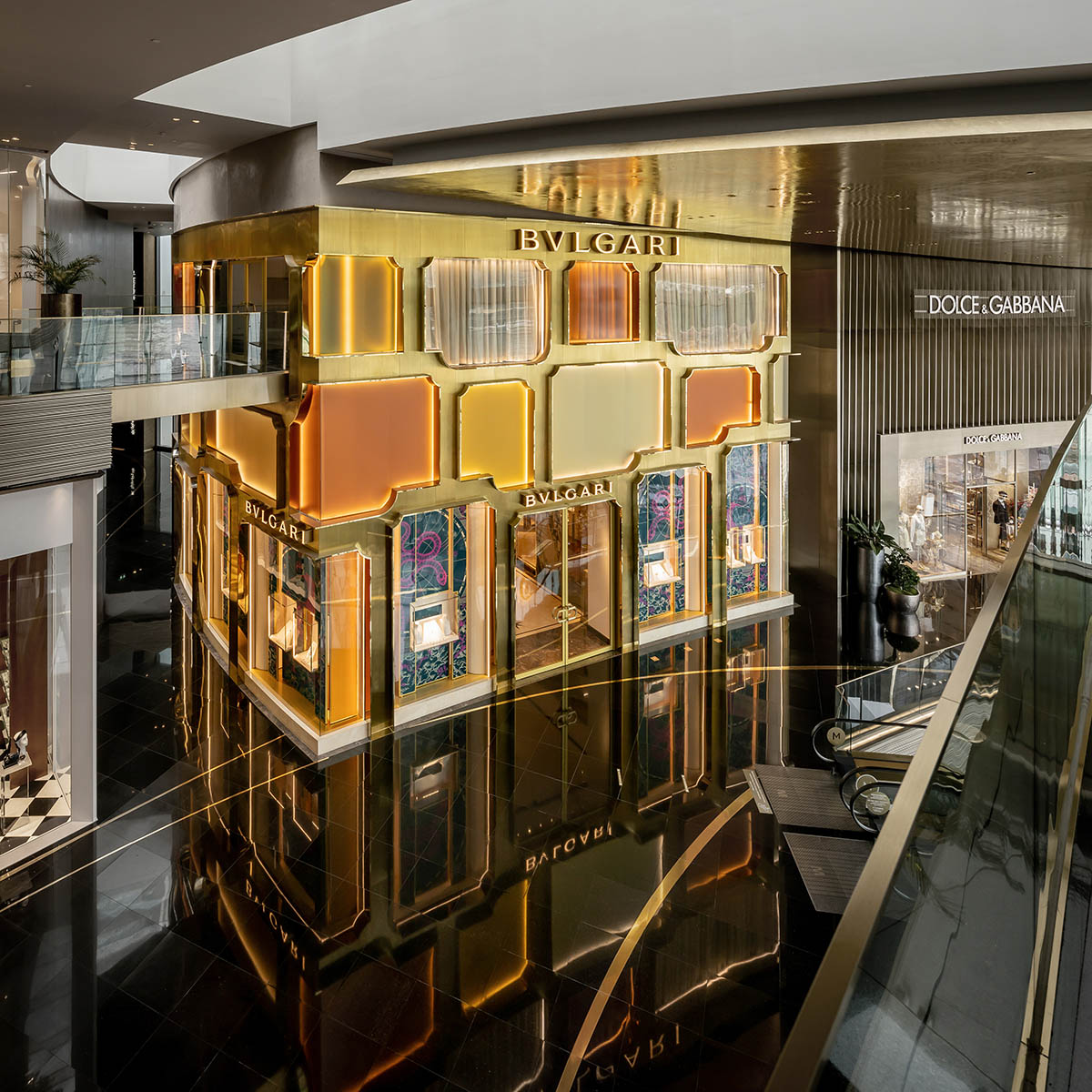 "Though all the designs will be unique to their location, each will have a distinct Bvlgari signature," added Jacob van Rijs.

"The windows have varying colours and degrees of transparency, tailored to the functions behind them: at the ground floor, transparent glass creates shop windows, while on the two levels above opaque windows are strategically placed to allow visitors to the top-floor VIP lounge their privacy," continued the firm. 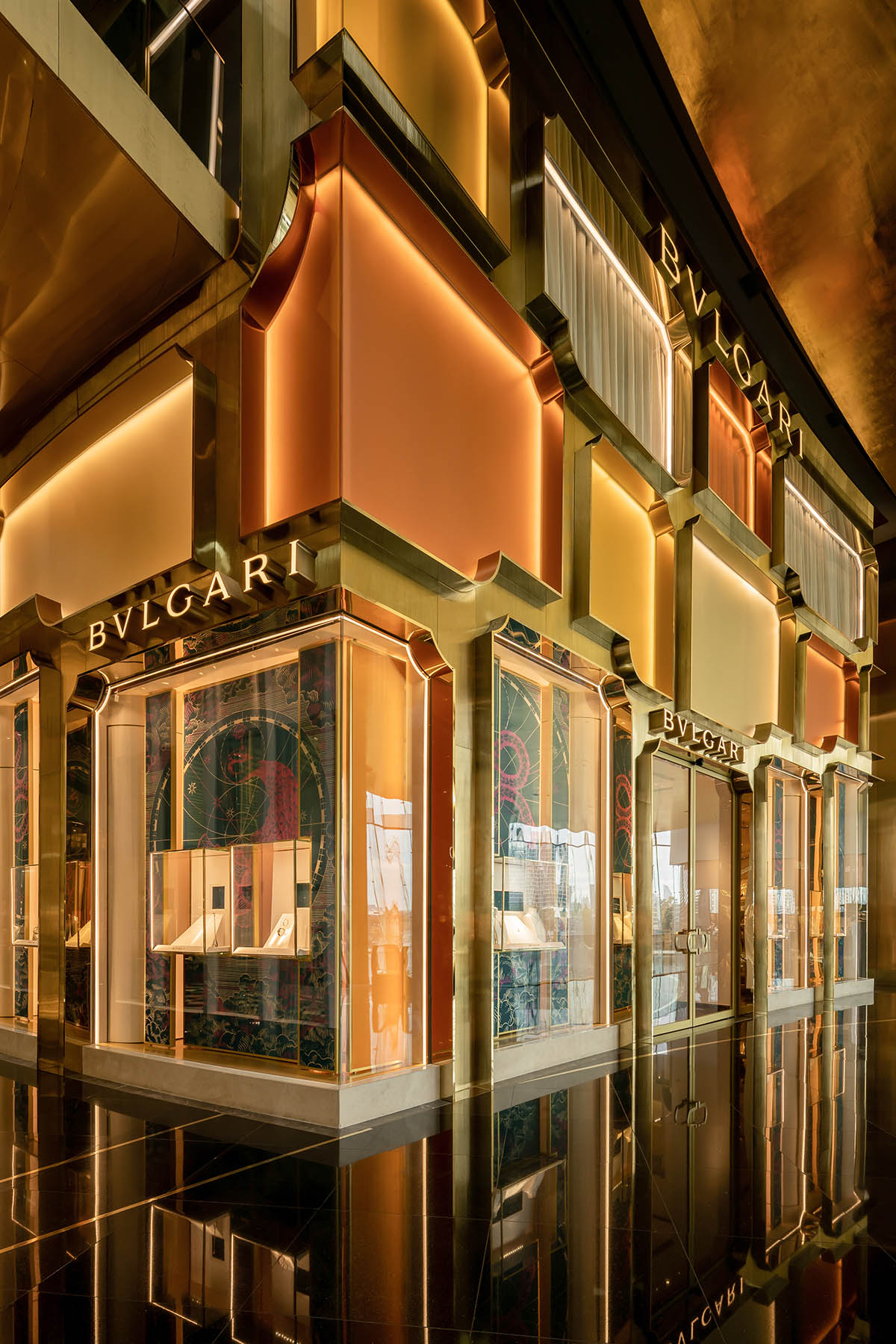 Bvlgari’s signature saffron colour is marked by subtle lightings is each window, to highlight the store’s products and the backgrounds. 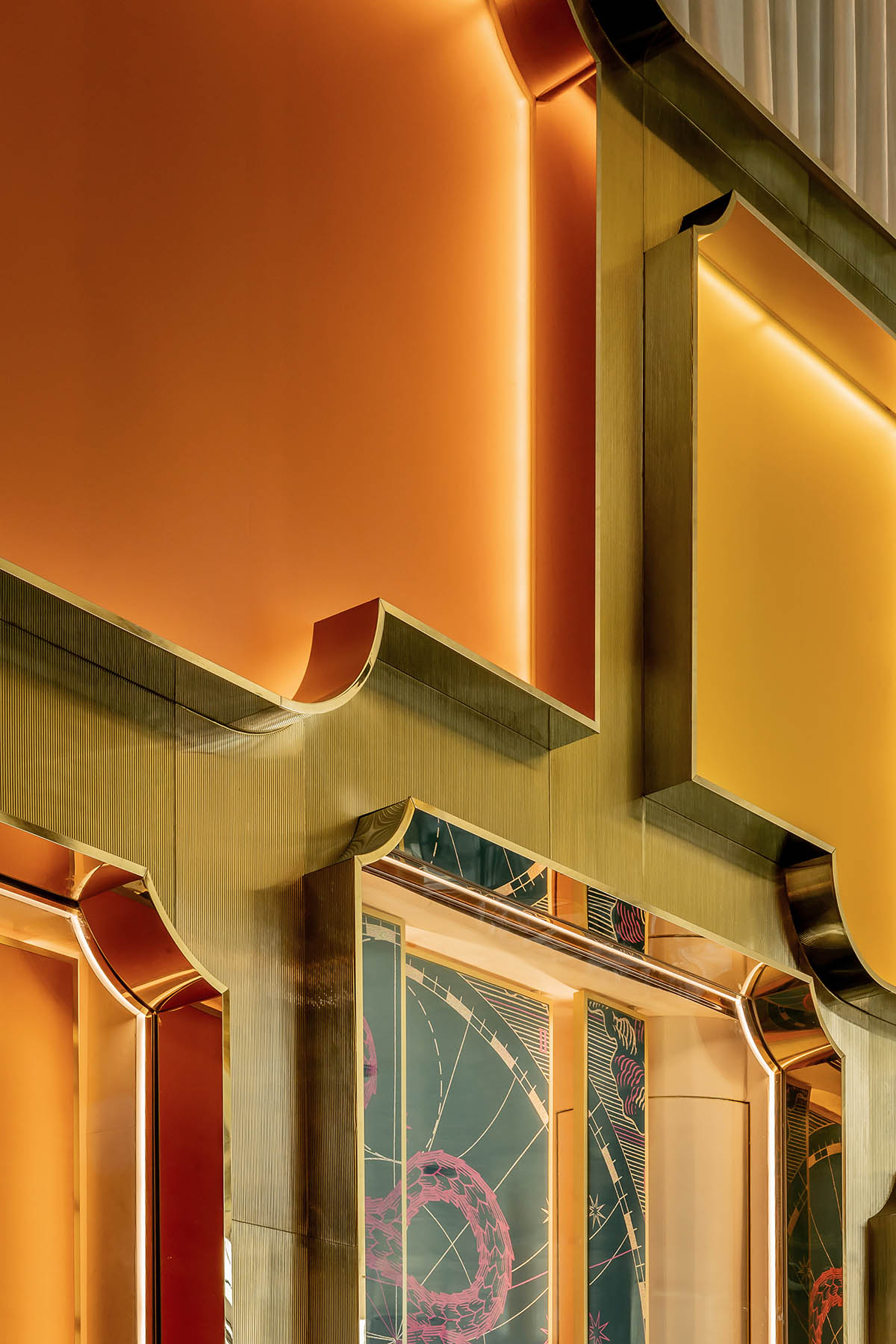 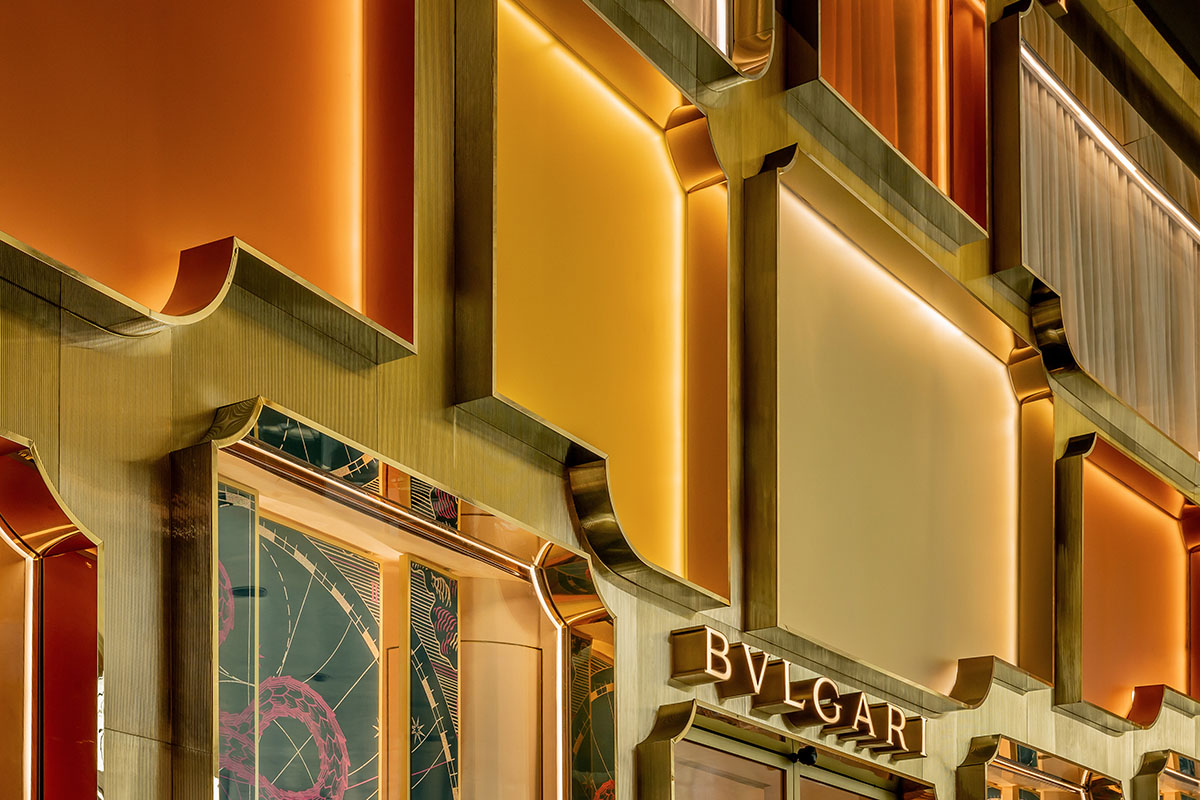 "This material gives the appearance of marble, with the veins lighting up at night to provide a radically different look," added MVRDV.

Earlier in the same year, during the Salone del Mobile, MVRDV presented an installation for Bvlgari which translated the well-known ‘Serpenti’ scale motif into a vaulted mirrored room. 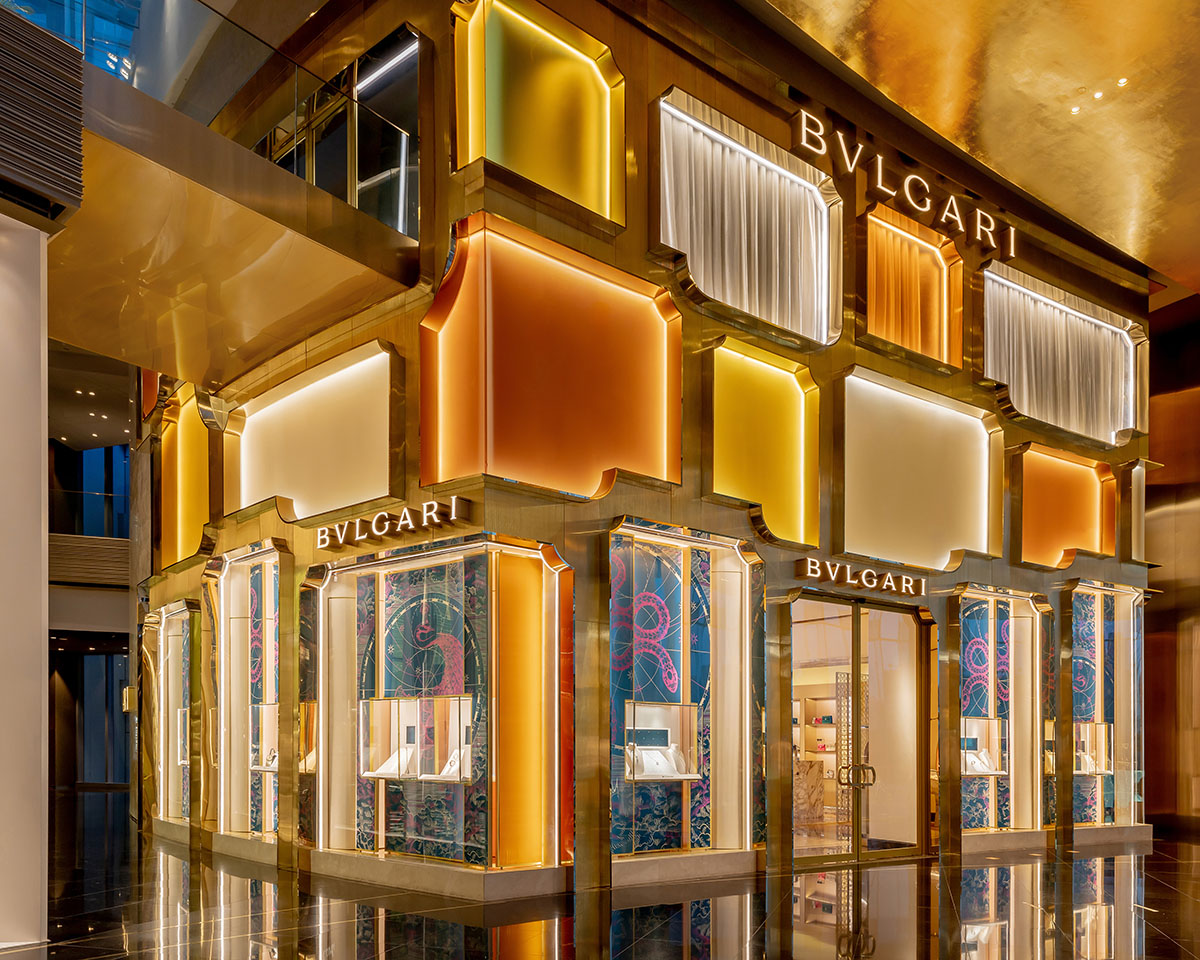 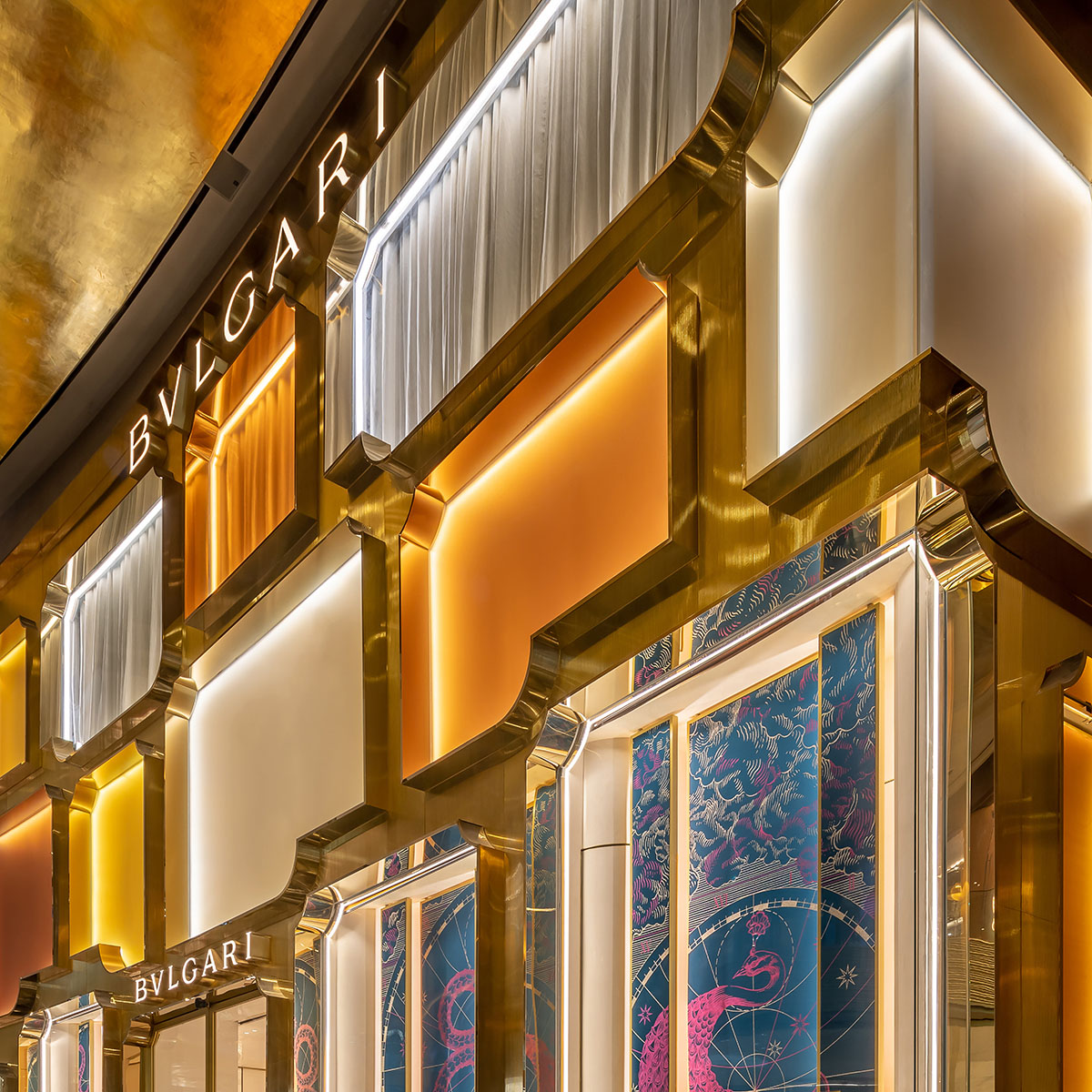 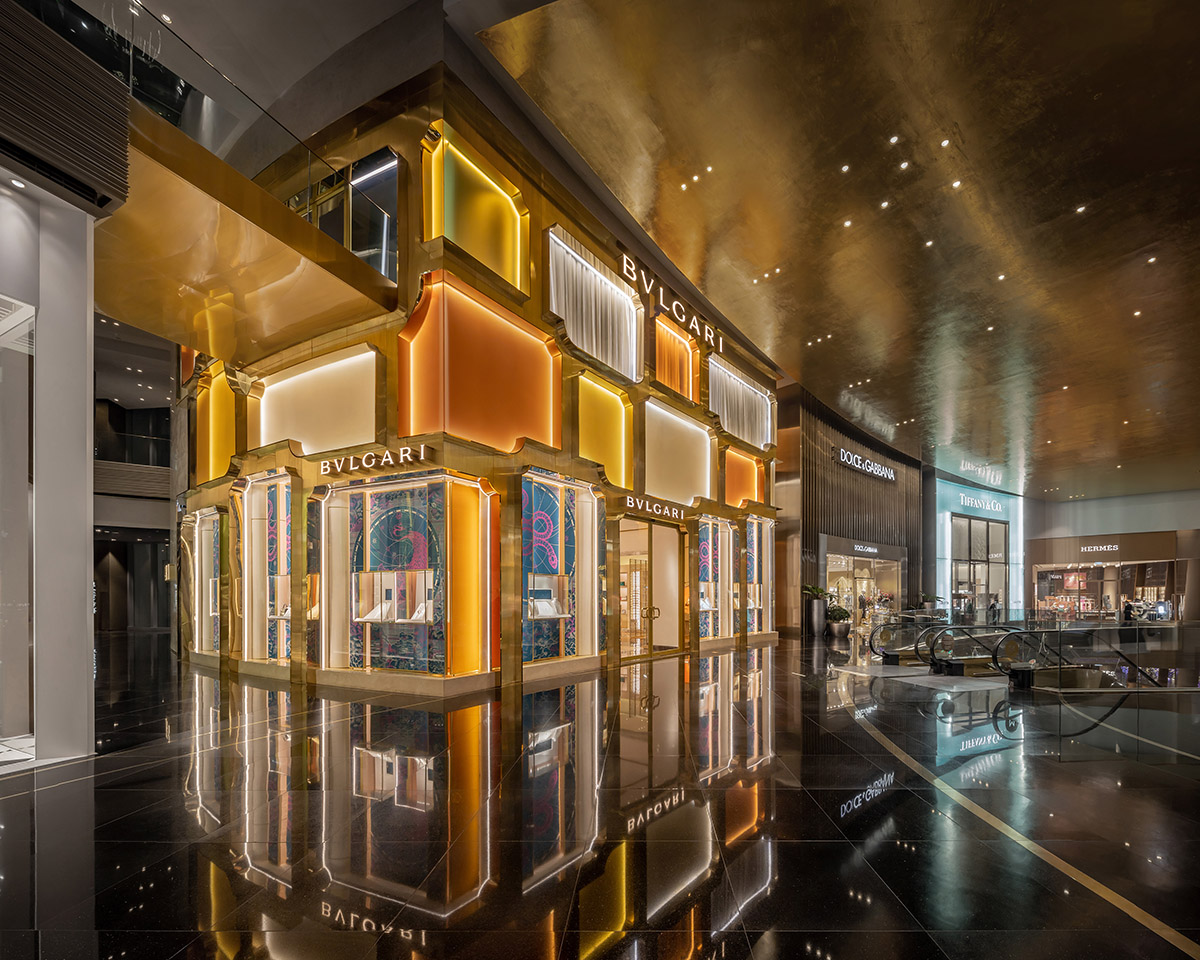 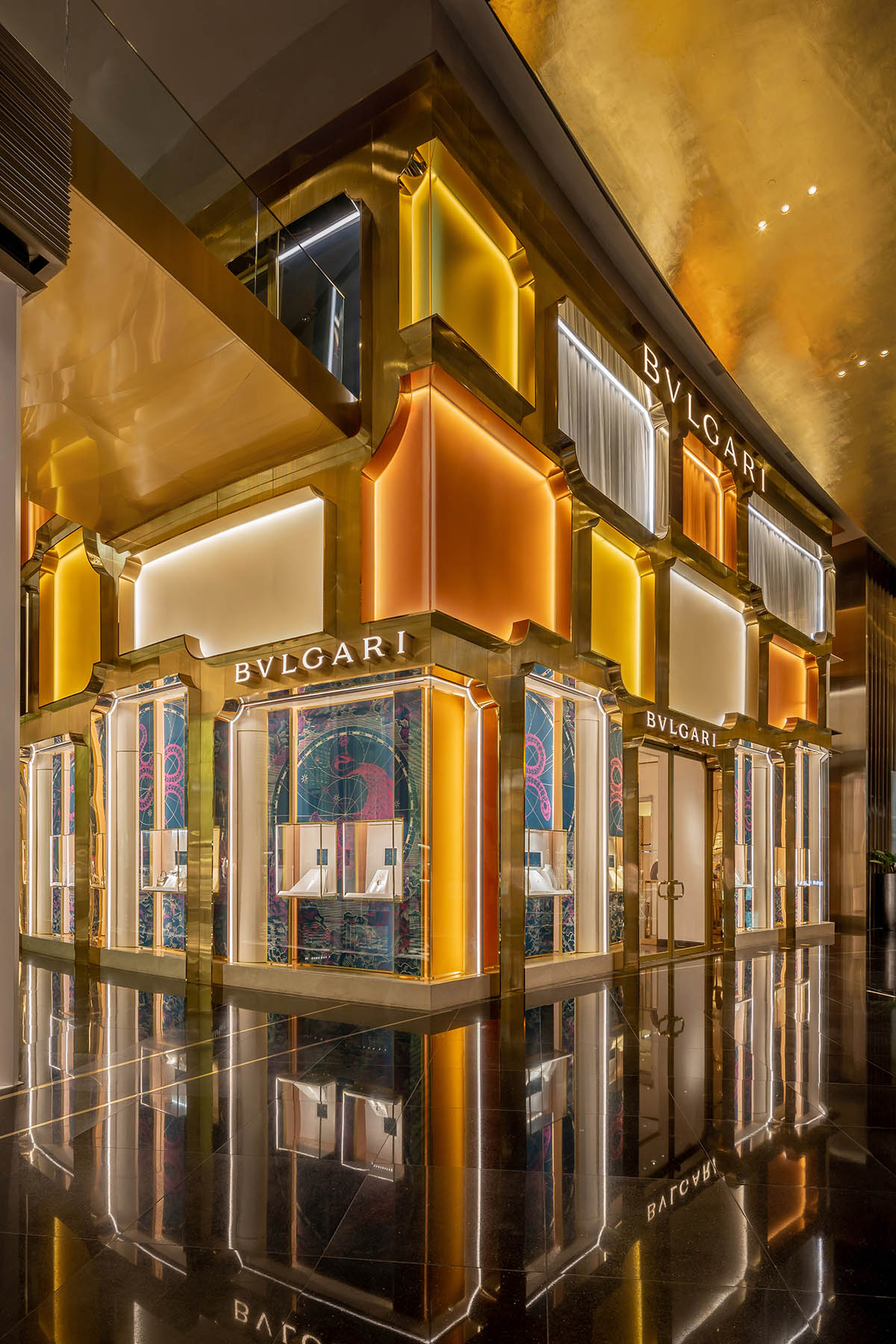 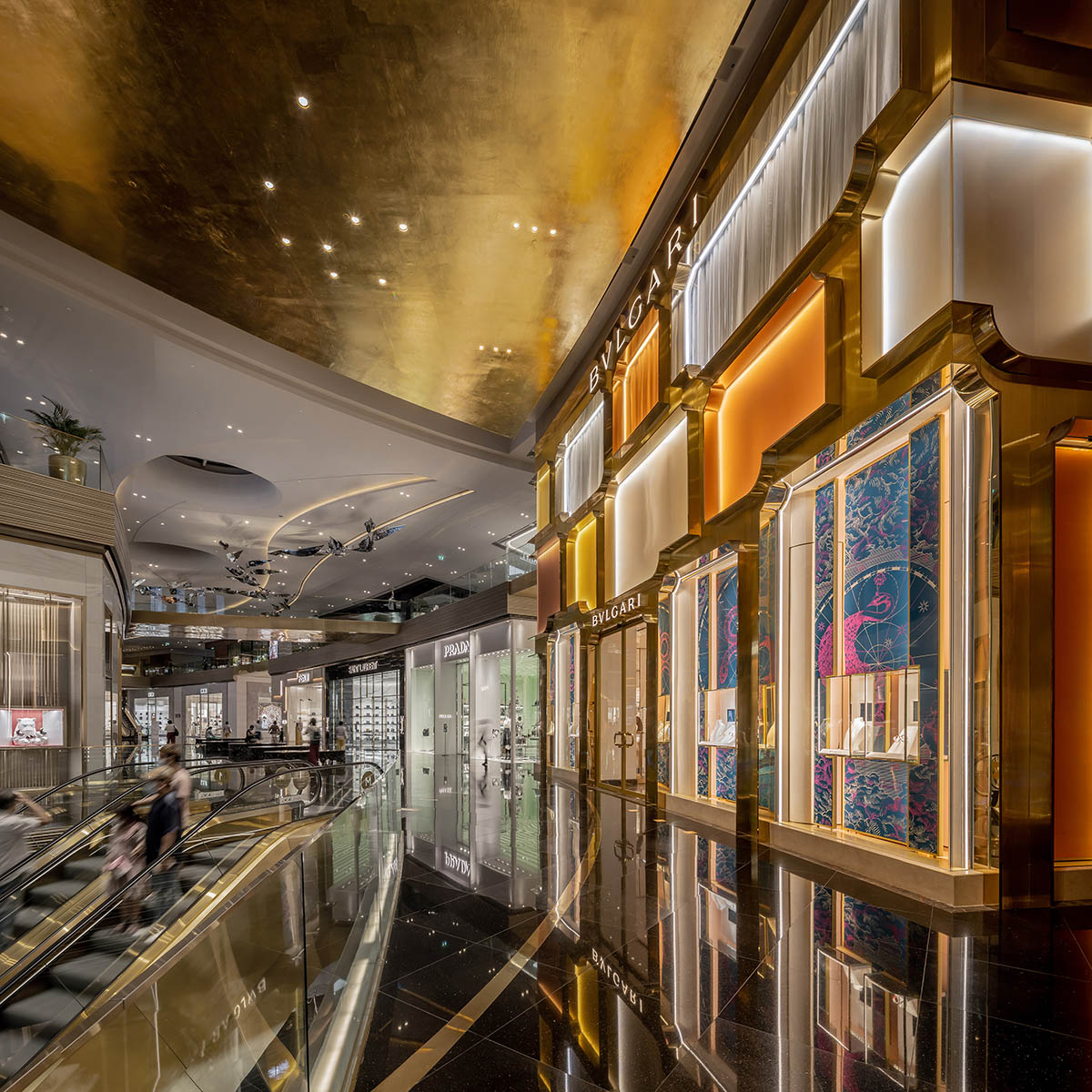 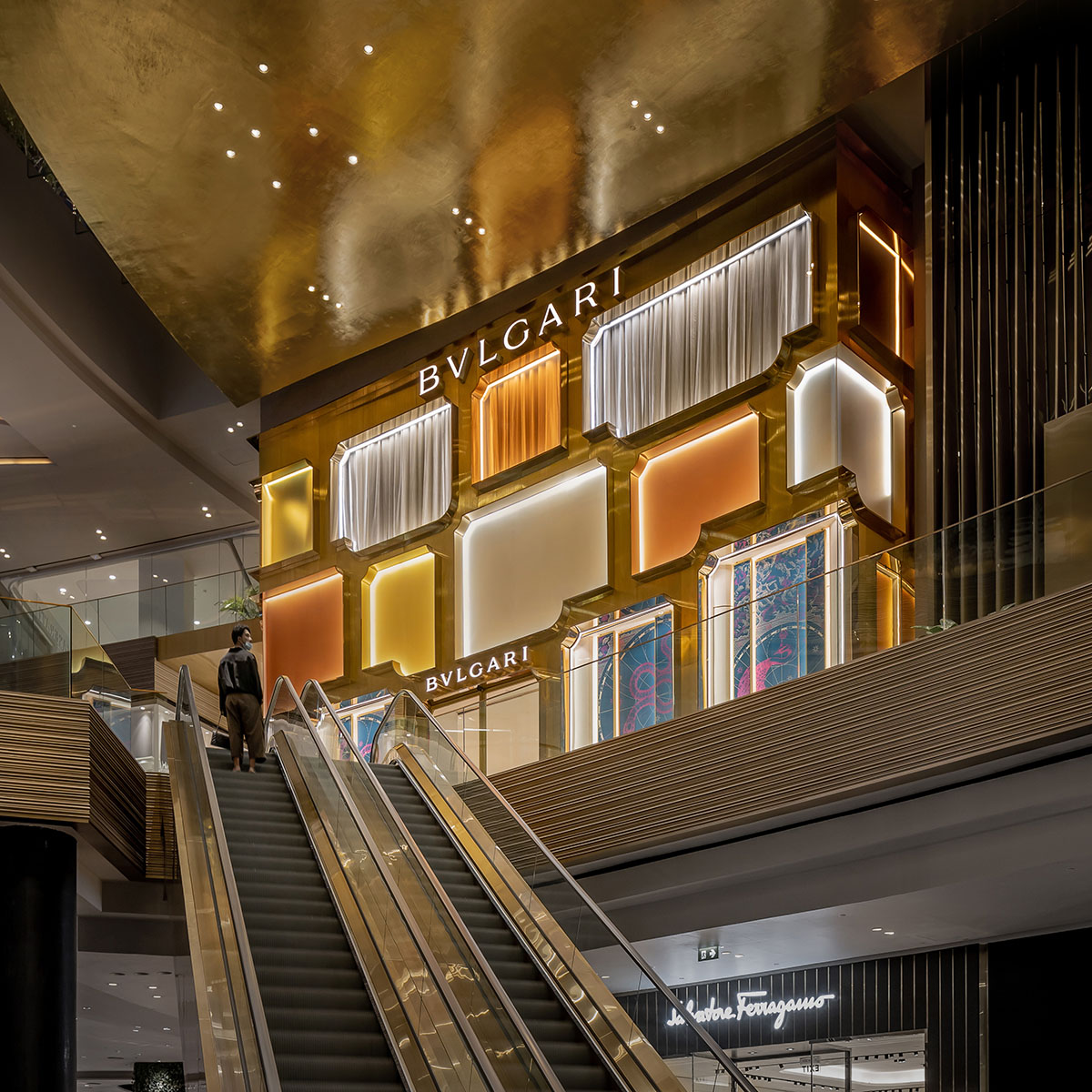 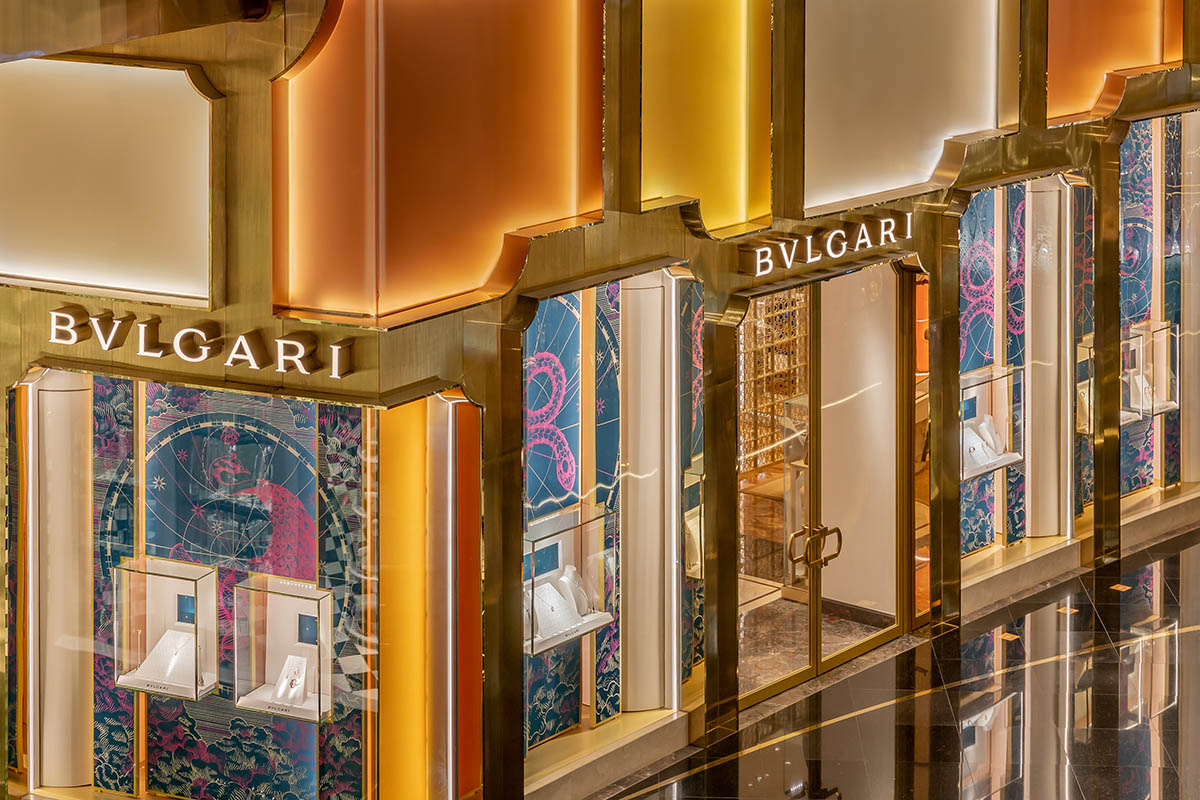 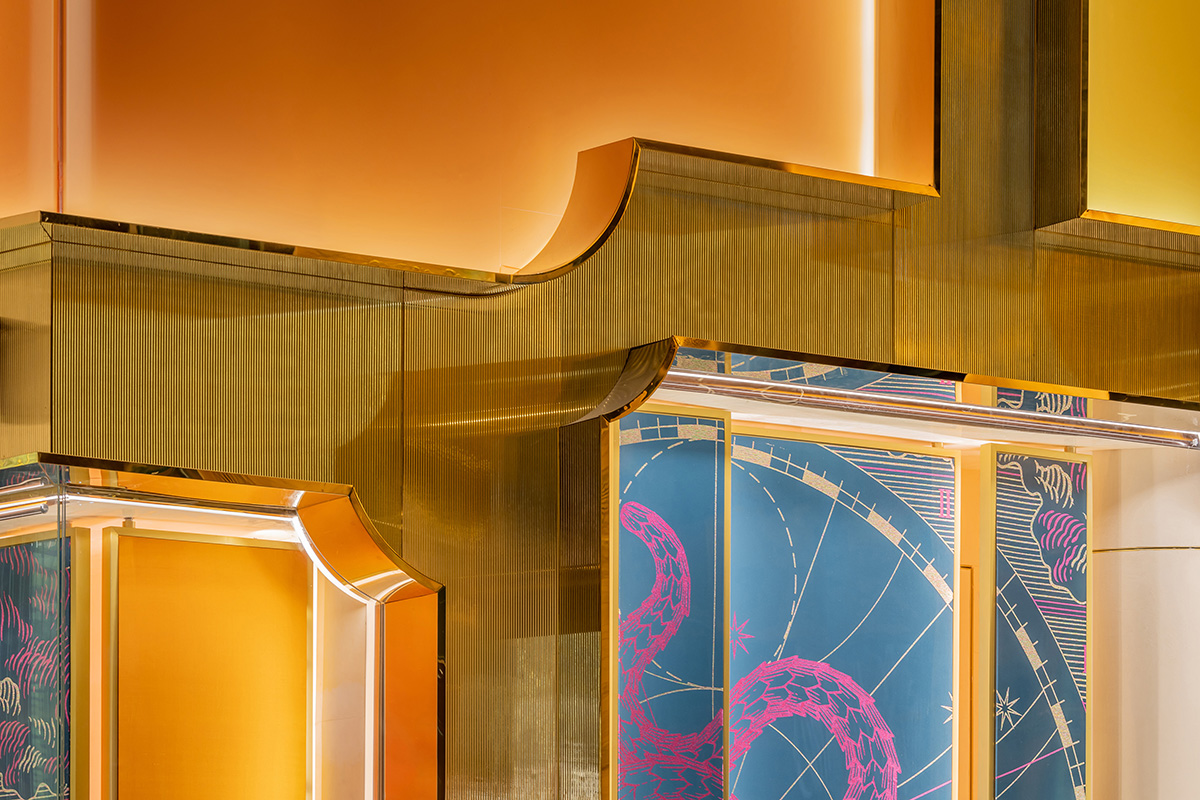