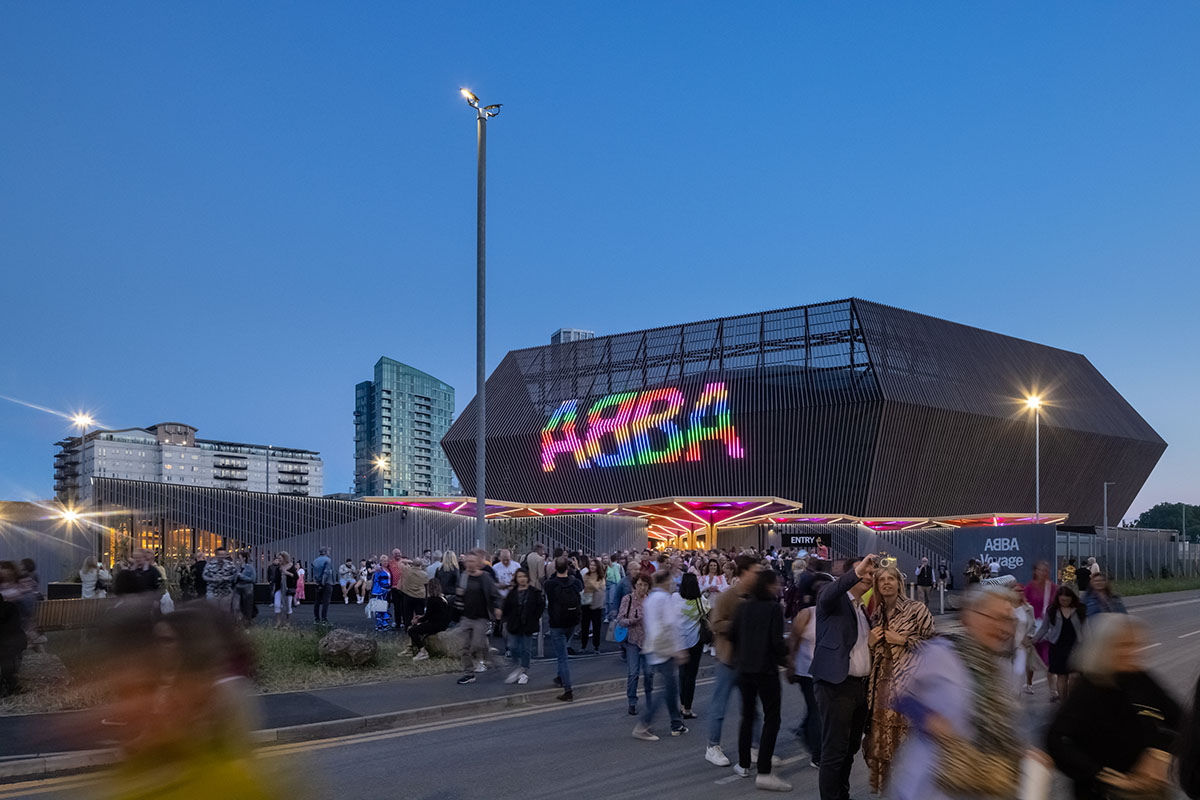 London and Hong Kong-based studio Stufish has completed a brand new performance venue in East London, United Kingdom, which is the world's largest demountable temporary venue", according to the studio.

Called ABBA Arena, the 3000-capacity arena was designed as the home for ABBA’s virtual concert "ABBA VOYAGE", which opened 26 May 2022.

The building is set to become a new cultural destination to the city, situated close to Pudding Mill Lane DLR station. 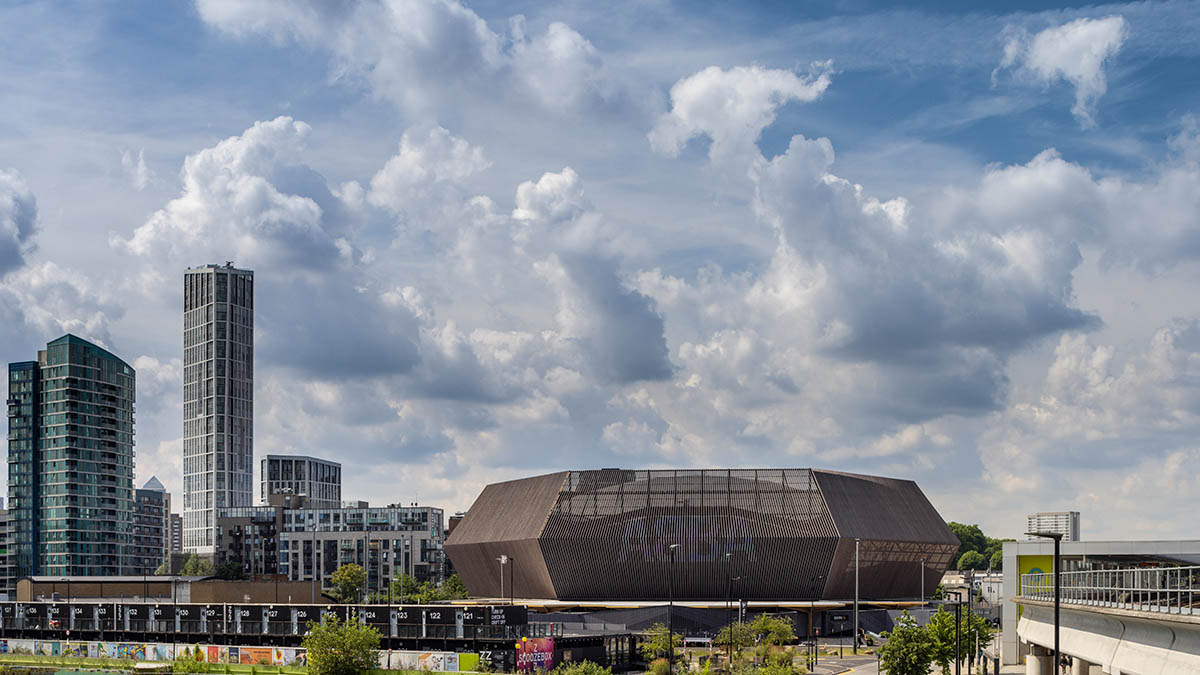 The architects chose steel and timber to create a mysterious, intriguing building that demands attention, whilst creating a welcoming atmosphere for visitors to enjoy their experience.

Designed to be seen from the inside to outside, the 25.5-metre-tall hexagonal arena was conceived in response to the requirements of the show, the staging and the desired seating geometry.

Described as "the largest of its kind", the performance venue has been designed as a demountable temporary structure. After its five-year tenure in East London, it will be able to be relocated to another site.

"The ABBA Arena, a portable venue, will set the standard for future shows where the physical and the digital fuse to create a new genre of experience in the Physical world," said Ray Winkler, CEO of STUFISH Entertainment Architects. 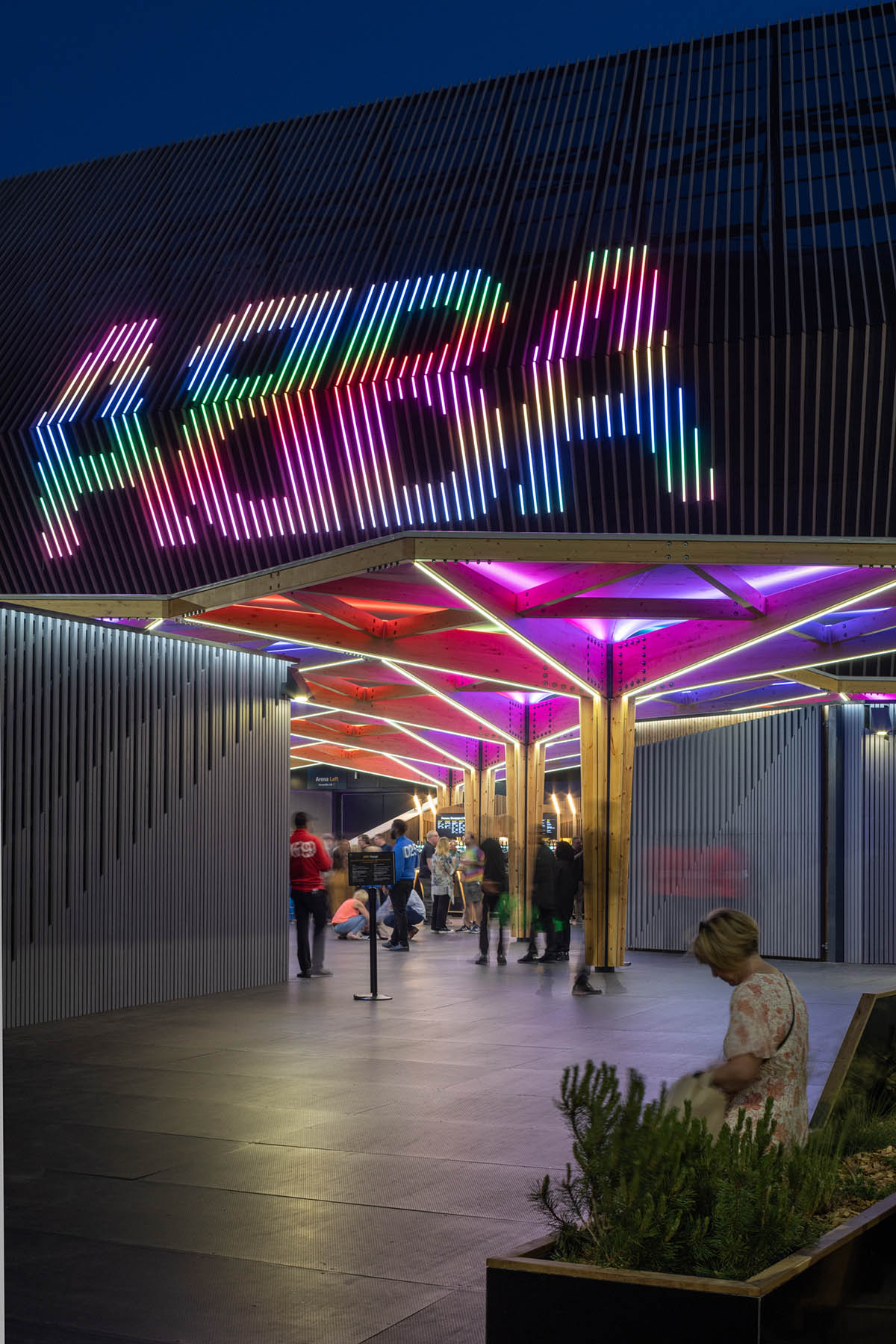 At the heart of the arena, there is a 1650-seat auditorium housing high-tech capabilities and offering a unique immersive entertainment experience. The auditorium is able to accommodate up to 1350 people for a standing audience.

The structure of the temporary venue that sits on concrete pads, is designed to create an internal clear span of 70 meters to allow for a large 360-degree immersive production.

The internal space, built by ES Global - who is specialist in the design of dynamic stages, temporary structures, was optimised to be as light as possible to minimise the load on foundations.

"The design of the roof is a direct response to the large structural span of the auditorium and a desire to compliment the venue’s mysterious appearance," said Stufish.

"An engineering feat, the arena is unified beneath a semi-axisymmetric steel dome weighing in at 744 tonnes, which during construction was built on the ground and then lifted 25.5m into the air by 18 strand jacks to its final position." 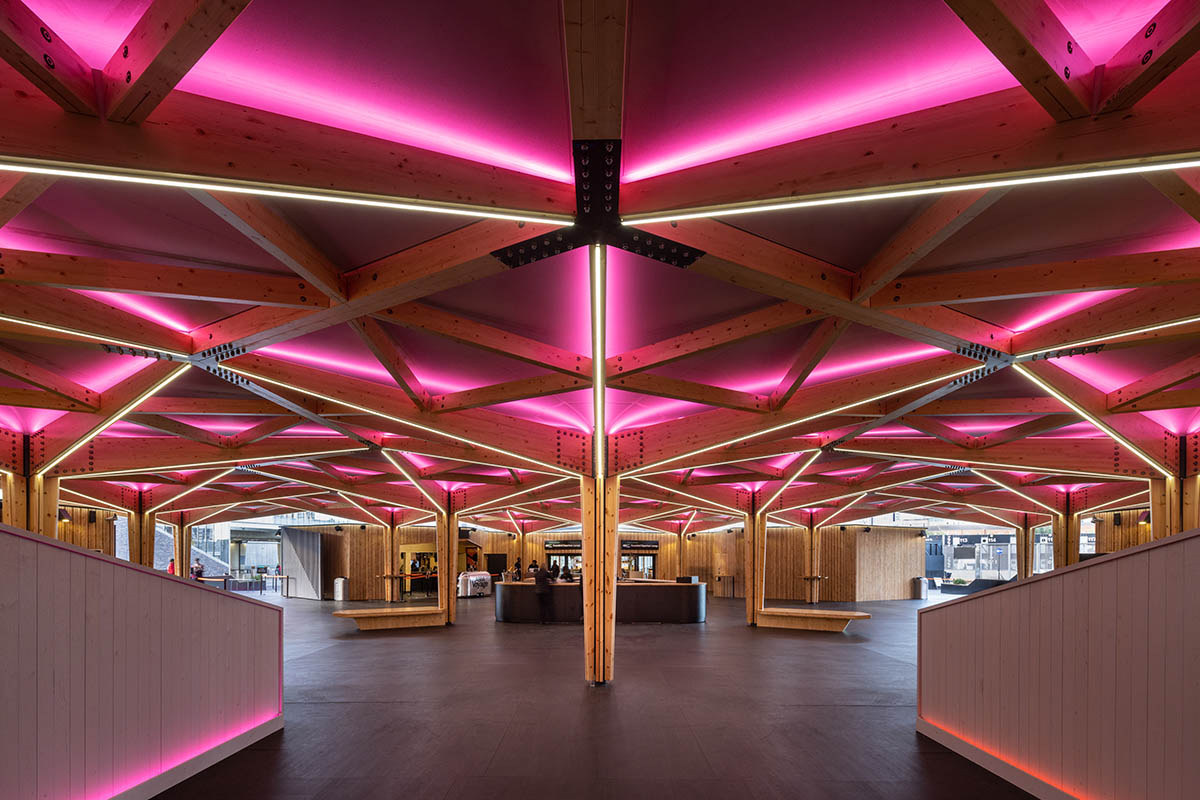 Stufish Entertainment Architects designed the roof and wall cladding to meet the acoustic performance of the venue and to limit the effects of noise on surrounding residential areas.

To contrast with the spectacle of the high tech show inside, the external structure that braces the steel dome roof and auditorium, is clad with a porous screen of sustainable timber battens. The large ABBA logo is integrated onto two facades with LED light strips following the timber.

Outside the auditorium an extended concourse area is used to serve visitors as they arrive, sheltered from the elements by a large timber canopy built by Stage One.

Like the superstructure itself, the canopy is a modular system that can be removed in sections and can be reconfigured to meet the needs of a new site once it has relocated. Timber modules follow the hexagonal shape of the venue to accommodate food and beverage options, retail, toilets, and a guest lounge.

"This unique project provided the perfect blend of architecture and entertainment, allowing us to create an amazing immersive experience for the audience, that has never been seen before," said Alicia Tkacz, Partner at Stufish Entertainment Architects.

Stufish added that "After undergoing rapid change under the LLDC Legacy Communities Scheme, Pudding Mill Lane was identified as the suitable location for the revolutionary new venue, due to its closeness to nearby cultural hubs, Olympic Park and neighbouring Hackney and Stratford."

"Prior to construction the site was vacant and occasionally used for temporary event parking."

"As part of its sustainable environmental agenda, its proximity to public transport links made Pudding Mill a desirable choice and once opened, Crossrail will allow even more options for visitors to reach the venue by public transport."

"The transport assessment indicates that 83% of visitors will travel to the arena using public transport," the firm added. 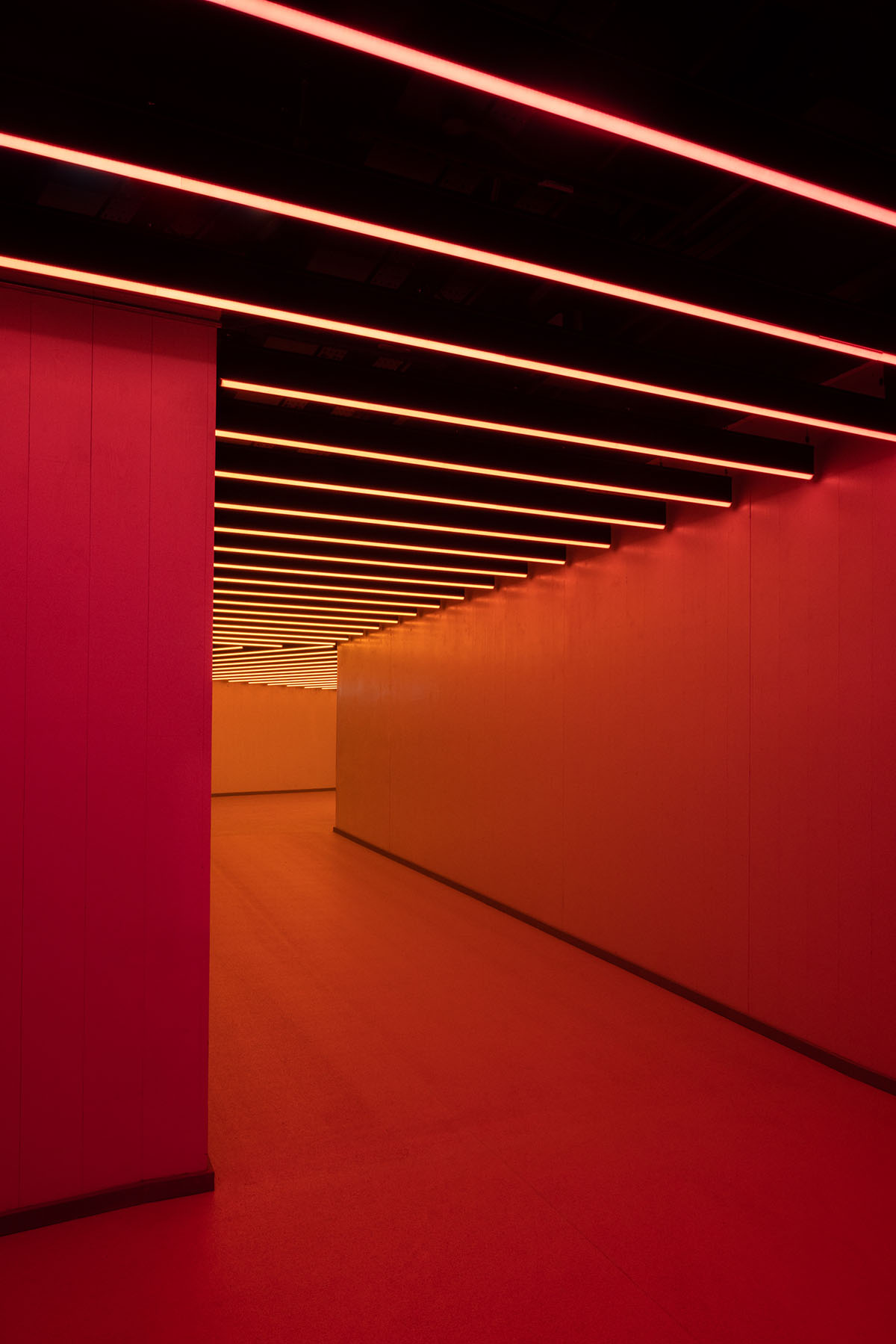 Stufish Entertainment Architects was founded by the late Mark Fisher and the firm has become world leaders in permanent and semi-permanent architecture.

In 2019, Stufish completed a new theatre, a bespoke Circus Show Theatre, in Zhuhai, China. The firm unveiled a new concept for a socially-distanced Vertical Theatre that represents a "new era of performance venues".