Interdisciplinary Tokyo-based art collective teamLab has revealed its design for a multi-sensory art space to be a new "home for infinite curiosity" on Abu Dhabi’s Saadiyat Island, United Arab Emirates.

Featuring smooth surfaces and flowing lines, the new art space is slated to be completed in 2024.

According to a press statement by teamLab, the new art space is set to "be an immersive, inspirational space where the intersection of art and technology will ignite curiosity, imagination and creativity in all who visit."

The building will present unparalleled unique installations that will be unique to Abu Dhabi, created through an extensive experimentation process. 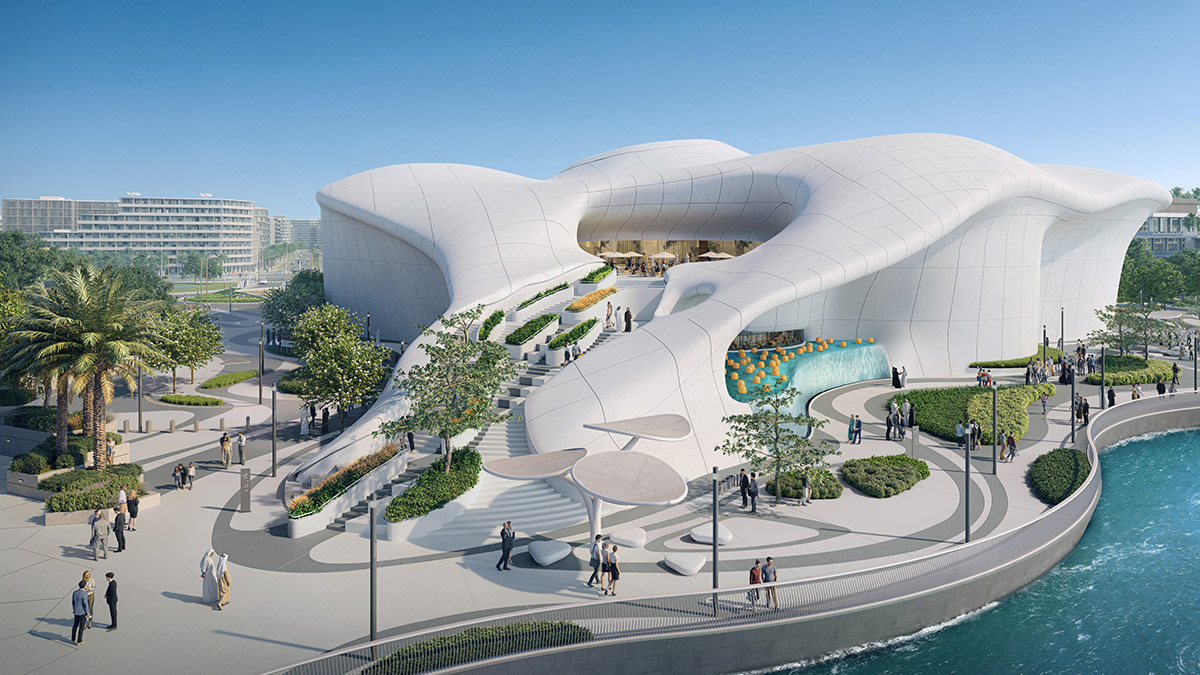 The Department of Culture and Tourism – Abu Dhabi (DCT Abu Dhabi) has also partnered with Miral, the emirate’s leading creator of destinations and experiences, to develop the concept, architecture and facilities, alongside teamLab.

The building is designed as a large cavernous structure in which a grand, open staircase invites visitors to enter in. Multiple large halls on the surfaces of the building create different façade configurations as the building flows.

"Visitors will be invited to open their minds and embark on a journey through teamLab’s new concept of Environmental Phenomena, which offers a new perspective on the world around us," stated the press release by teamLab.

"The featured artworks are created and shaped by the environment which produces the various phenomena."

teamLab worked with Abu Dhabi-based practice MZ Architects to create a unique architecture and to be able to play an important role in providing the artworks with an environment to evolve freely and organically, as if they were life-forms themselves.

The team stated that "the experience will be unique to each visitor, changing with each visit, as they discover a place in which to endlessly explore and transcend the limits of their imagination."

"It is a great honour for us to be able to open teamLab Phenomena Abu Dhabi in the Saadiyat Cultural District of Abu Dhabi, a world-leading, future-focused city," said Toshiyuki Inoko, Founder of teamLab.

"At teamLab Phenomena, visitors will be immersed into a world that organically changes and evolves through the participation and actions of the people in it, and it is precisely this physical experience that can expand our senses of value. The future is built upon the grand sum of people’s creations."

"Curiosity drives people towards a deeper understanding of the world and leads to creativity. We believe that imagination decides the direction of this creativity. Our hope is for teamLab Phenomena Abu Dhabi to create opportunities for curiosity and imagination to be born," Inoko added. 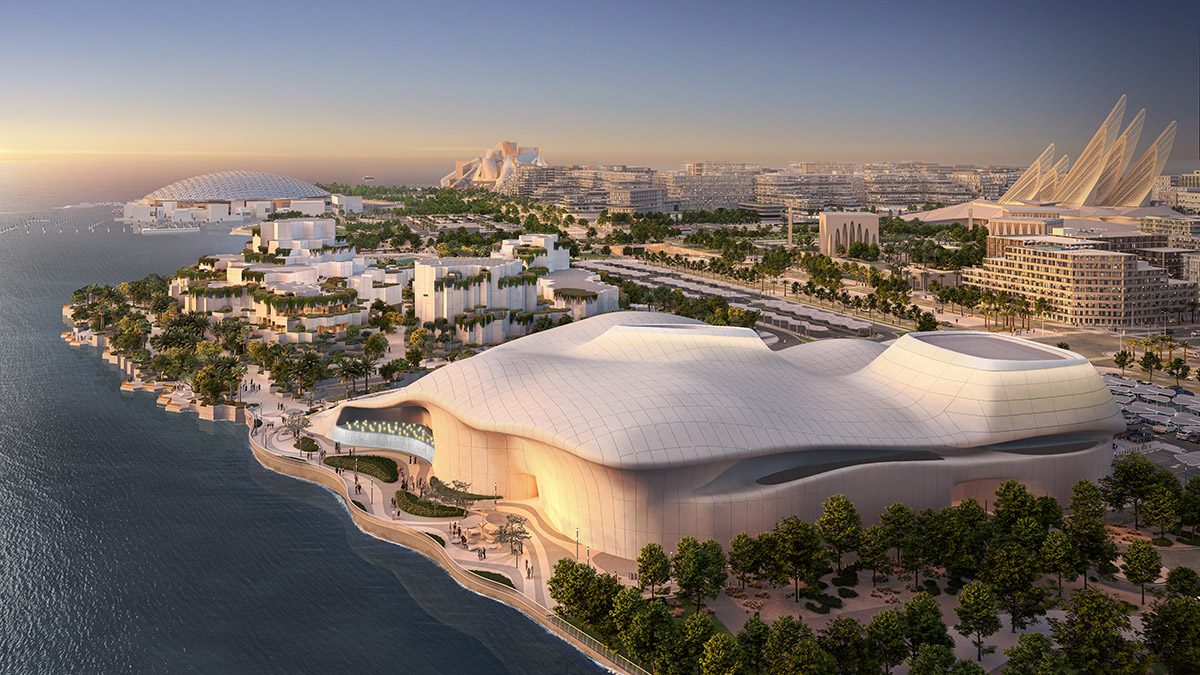 Commenting on the philosophy behind the project, Inoko continued: “teamLab Phenomena Abu Dhabi is based on teamLab’s new concept in which the existence of the artworks are created by the phenomena produced by their environment."

"The artworks in teamLab Phenomena Abu Dhabi do not exist independently but are created by the environment which produces the various phenomena, stabilising their structure."

"Objects like stones and man-made creations maintain a stable structure on their own. Unlike these, the existence of the artworks in teamLab Phenomena Abu Dhabi are dependent on their environment. The environment produces phenomena and stabilizes their structure - these stabilized phenomena are what create the existence of the artworks," Inoko continued.

"Environmental phenomena are released from the material substances that have been responsible for maintaining structures of existence. Elements like air, water, and light that permeate our daily lives are transformed by their environment into unique phenomena that become works of art."

"A stone can continue to exist in a closed box, sealed off from the outside world, but life cannot sustain its existence in such a box because it is created by its environment. Life is a miraculous phenomenon that emerges from a flow in a continuous world," Inoko added. 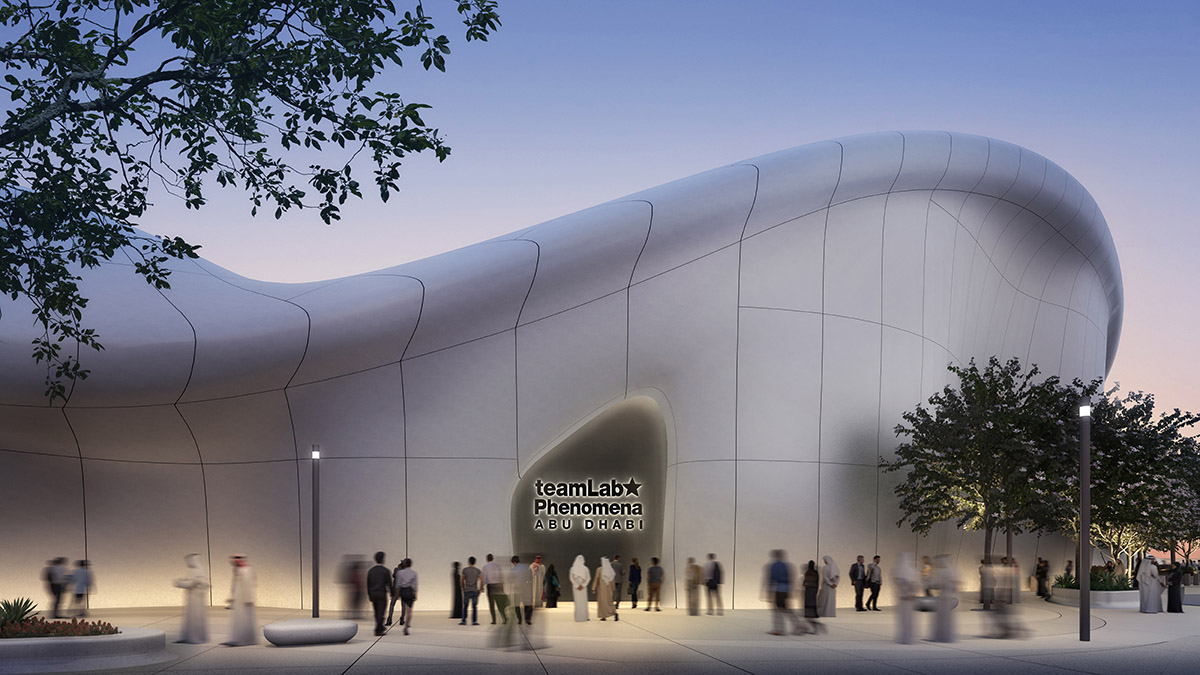 "Curiosity and imagination are at the core of who we are as human beings, sparking all our discoveries, inventions and innovations through the millennia. Sitting at the intersection of art, technology, nature and high-tech fantasy, teamLab Phenomena Abu Dhabi will offer a world of boundless wonder and creativity to all who visit, encouraging the new perspectives that are so essential to a thriving future," said Mohamed Khalifa Al Mubarak, Chairman of DCT Abu Dhabi.

"Adding yet another outstanding experience to our world-leading cultural destination, the teamLab Phenomena experience will be unique to Abu Dhabi, reinforcing the emirate’s position as a destination of distinction."

"Providing a journey which will trigger the senses, nurture curiosity, spark imagination, and awaken a thirst for knowledge, teamLab Phenomena Abu Dhabi fully supports our commitment to inspire a new generation of innovators and creators in the emirate and beyond," Mohamed Khalifa Al Mubarak added.

The Saadiyat Cultural District is an ambitious undertaking that, will be one of the world’s pre-eminent cultural destinations. Through its museums, cultural centres, and educational institutions, the District will boast one of the highest concentrations of cultural experience in the world.

The Saadiyat Cultural District will soon also include Foster+Partners-designed Zayed National Museum, the national museum of the UAE, Guggenheim Abu Dhabi by Frank Gehry, focusing on global Modern and Contemporary art, and the Abrahamic Family House by Adjaye Associates, which will comprise three religious spaces in one complex – a mosque, a synagogue and a church – to inspire and nurture acceptance and peaceful coexistence among people of all faiths.

All renderings courtesy of teamLab.