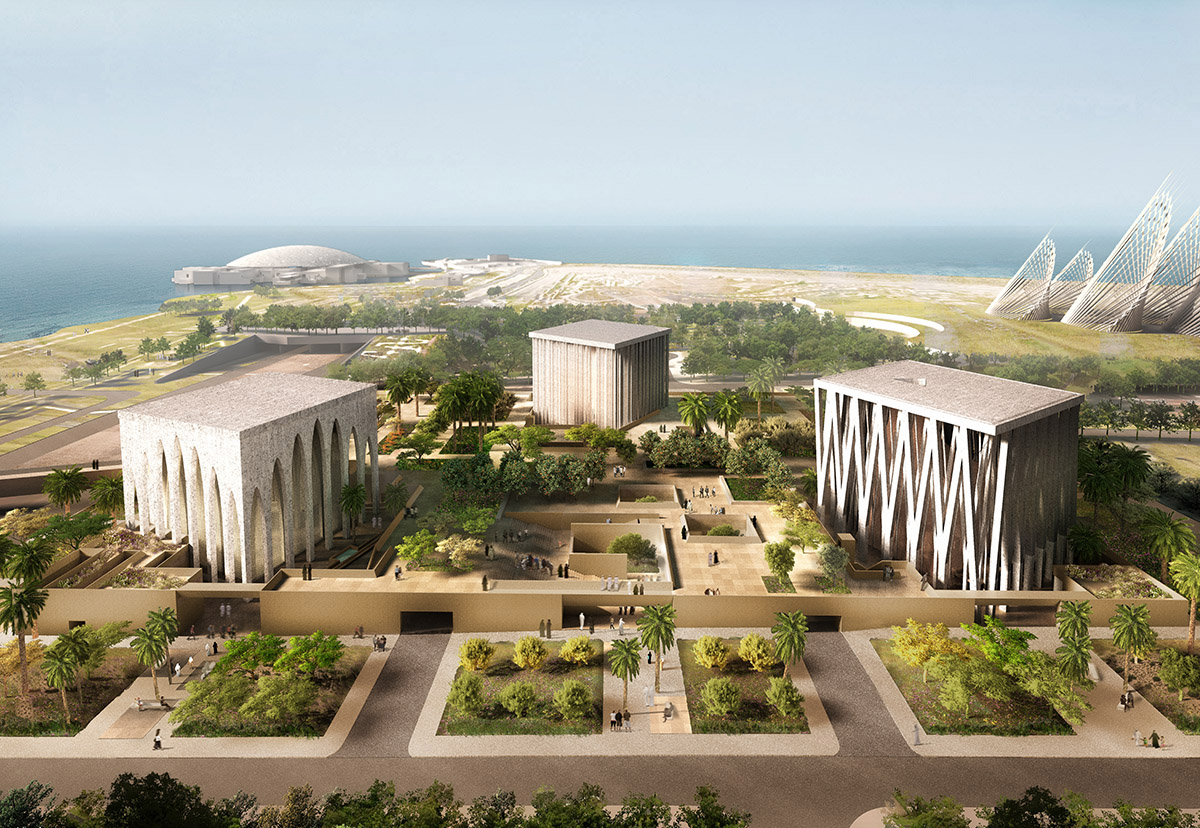 David Adjaye's firm Adjaye Associates has won a competition for a new landmark project on Saadiyat Island in Abu Dhabi, the capital and the second most populous city of the United Arab Emirates.

Adjaye designs new ensemble for the Abrahamic Family House, which will be a collection of three religious spaces, a mosque, a synagogue and a church sitting upon a secular visitor pavilion. 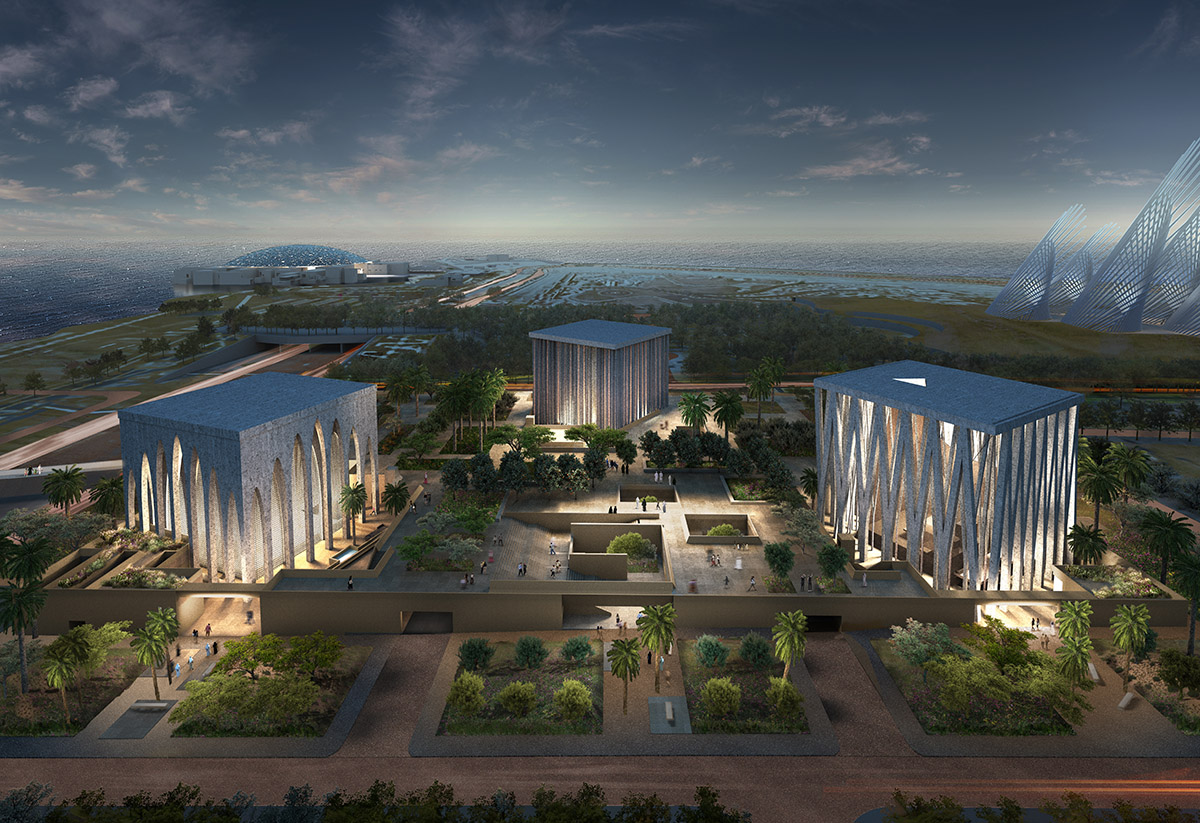 The landmark project hopes to embody the relationship between the three Abrahamic faiths whilst providing a platform for dialogue, understanding, and coexistence between their religions. The founding Higher Committee members include Christian, Islamic and Jewish faith leaders with new members to be invited to join in the coming months. 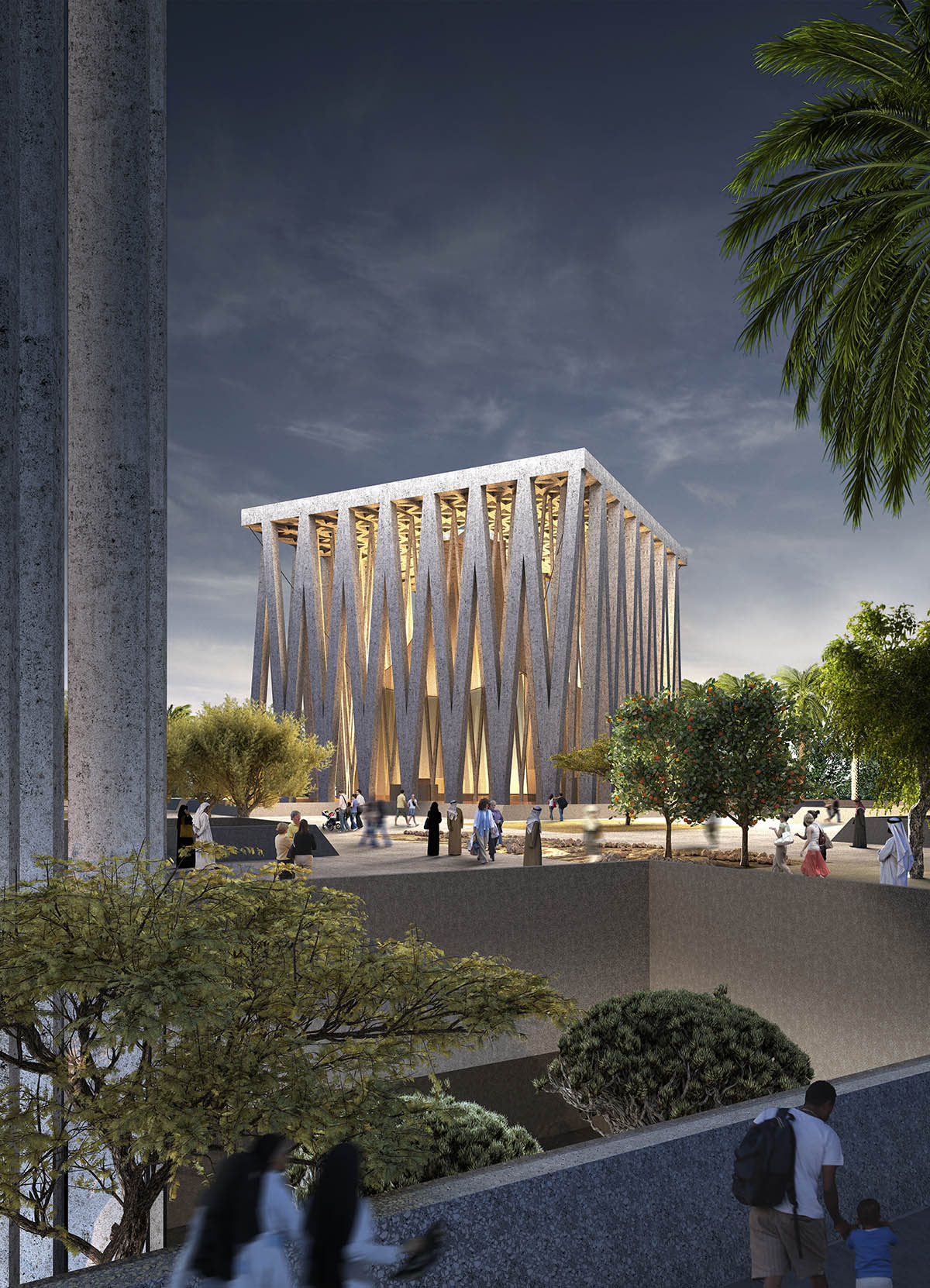 Adjaye's proposal was first unveiled at an event held at the New York Public Library on 20th September. The Abrahamic Family House will serve as a community for inter-religious dialogue and exchange, nurturing the values of peaceful co-existence and acceptance among different beliefs, nationalities and cultures.

Within each of the houses of worship, visitors will have the opportunity to observe religious services, listen to holy scripture and experience sacred rituals. The fourth space - not affiliated with any specific religion - will serve as a center for all people of goodwill to come together as one. The community will also offer educational and event- based programming. 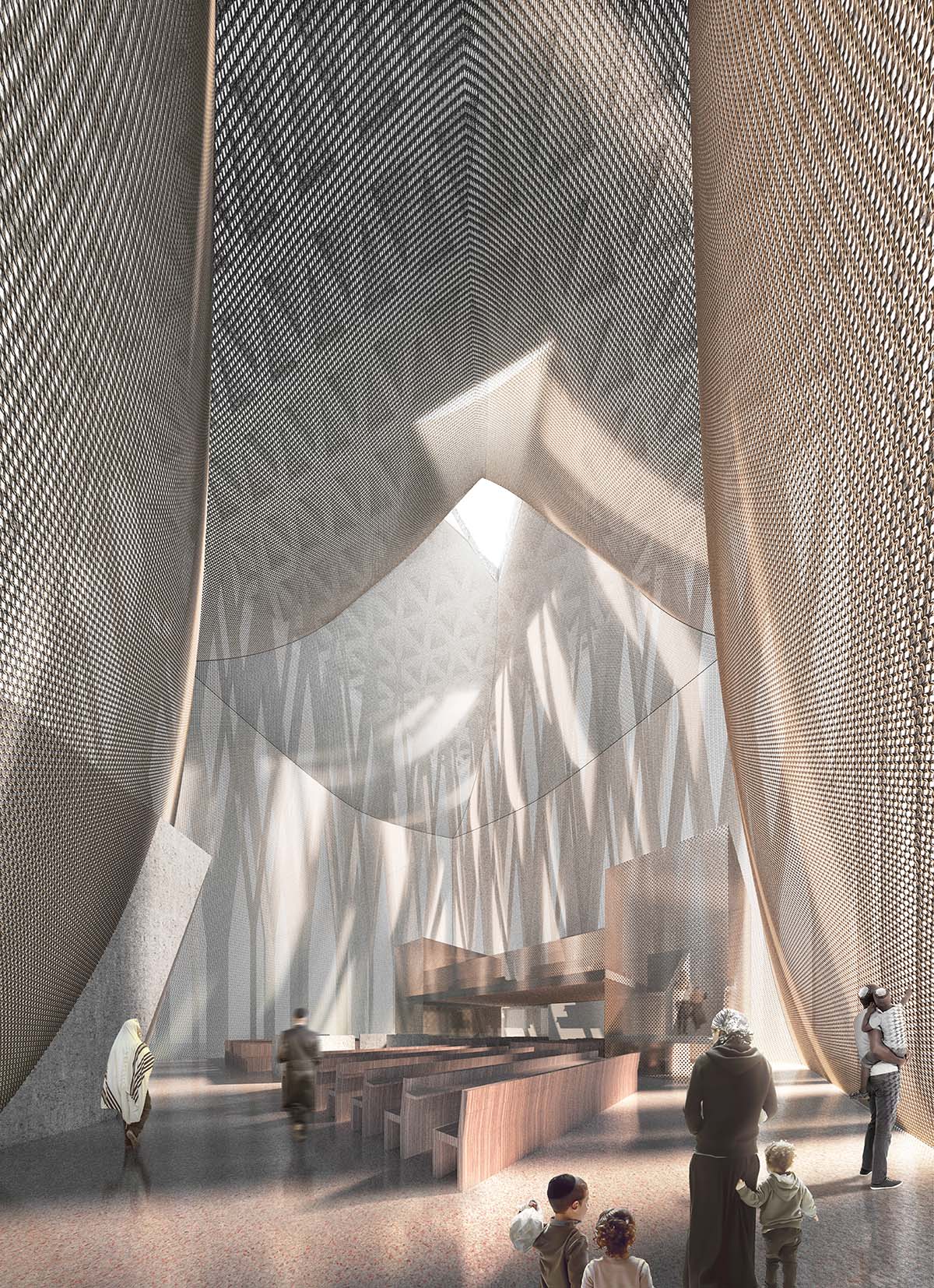 "My experience and learning with this project brought a clarity, I’ve always seen these three religions as very different – it’s what we’re led to believe, but then you discover these incredible connections and overlaps that sit with these distinct differences," said Sir David Adjaye, Founder and Principal of Adjaye Associates.

"The evolution which then developed the narrative was to discover what was adjacent, surprisingly close even." 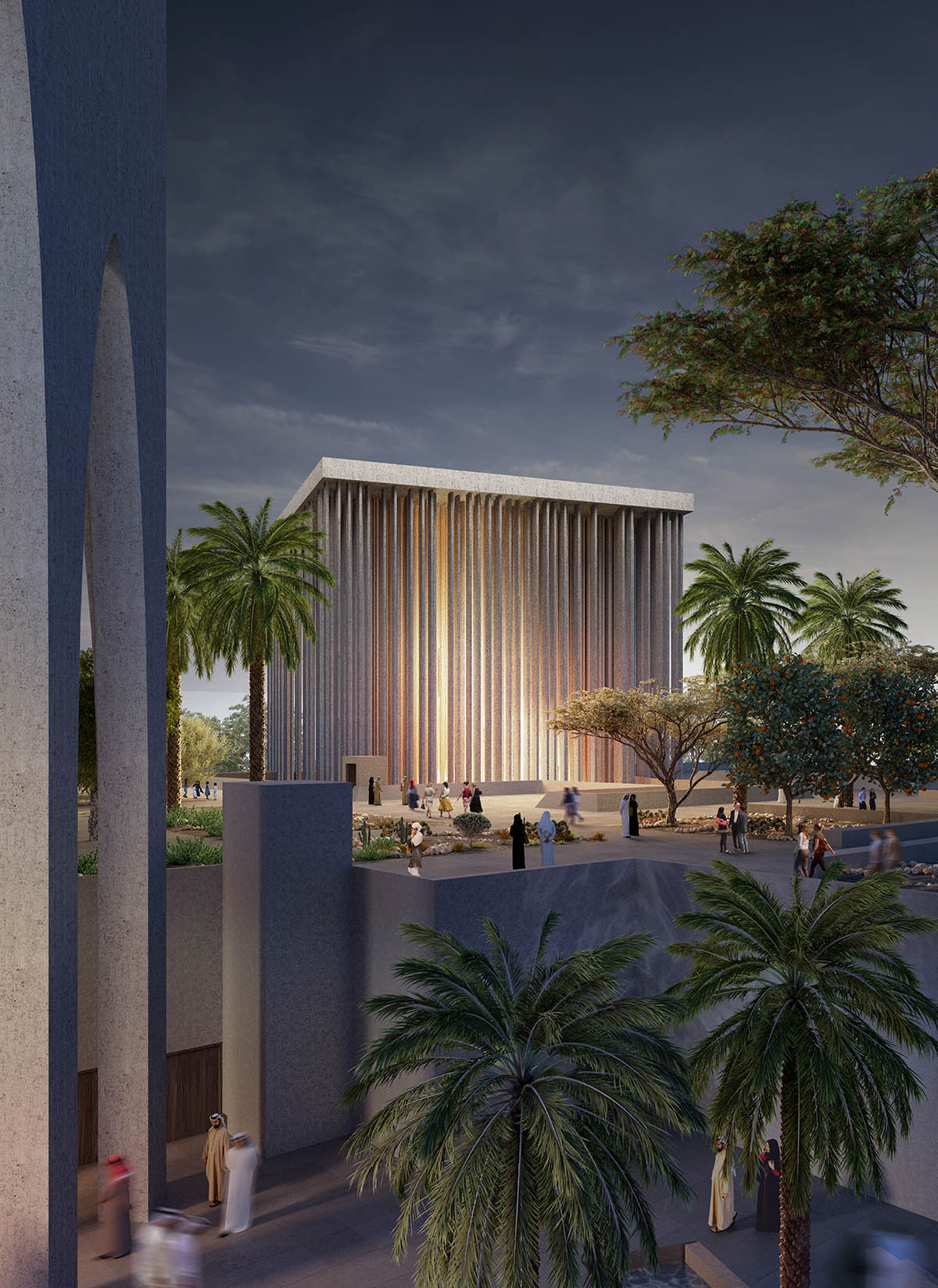 "The Form is translated from the three faiths, we use the lens to define what is similar as opposed to what is different and we use the power of that revelation to make the form," Adjaye added.

"We were led towards these powerful plutonic forms with a clear geometry, three cubes sitting on a plinth – though not aligned, they each have different orientations." 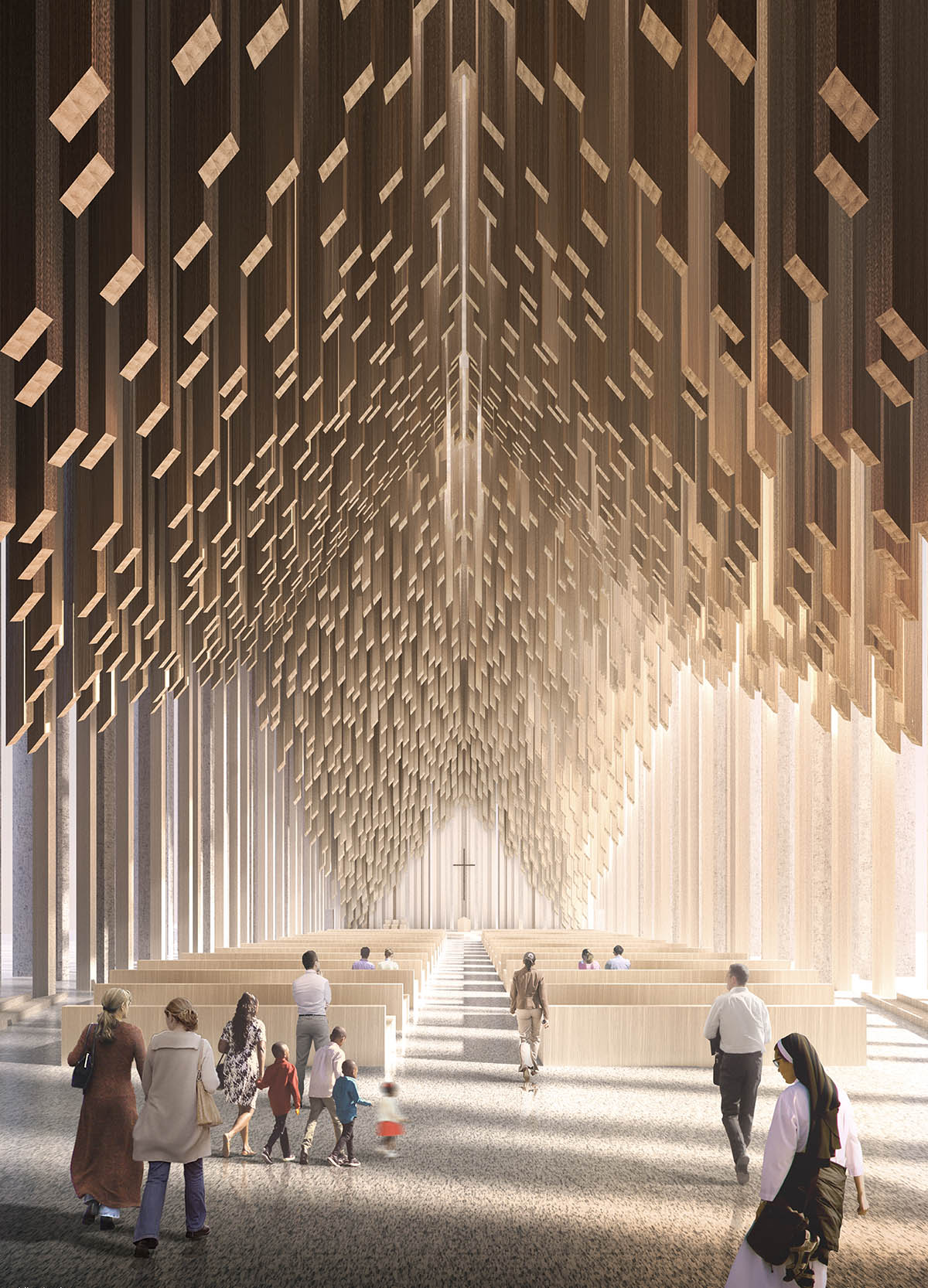 "The story then starts to become apparent through the power of the silhouette, unified with commonality and the articulation of the three forms. These structures represent a safe space, each volume illustrated with colonnades, screens and vaults to represent the sacred nature."

"Our discovery continued with the common ground, the public space in-between, where the difference connects. I saw the garden as a powerful metaphor, this safe space where community, connection and civility combine – this space exists between the three chambers, the three faiths. The podium allows you to interact with each space, there’s no preventative threshold, and this way you dissolve the perceptions of not being included and encourage the celebration of this collective history & collective identity," Adjaje continued.

Sir David Adjaye, Founder and Principal of Adjaye Associates also commented on the competition and he said: "I am humbled and honored that our design has been selected." "I believe architecture should work to enshrine the kind of world we want to live in, a world of tolerance, openness, and constant advancement. Architecture and landscape design can interpret the fabric and principles of a place, to advance the conversation, reassess current assumptions about the world, and discover more meaningfully what a place can give back."

"As an architect I want to create a building that starts to dissolve the notion of hierarchical difference – it should represent universality and totality – something higher, that enhances the richness of human life. We hope we have set out a plan for a beautiful and thought- provoking space that celebrates the three faiths and stimulates dialogue and understanding at a critical time for the world."

"Built in the UAE’s capital, the space will be open to the world, and our hope is that through these buildings people of all faiths and from across society can learn and engage in a mission of peaceful coexistence for generations to come," he concluded. 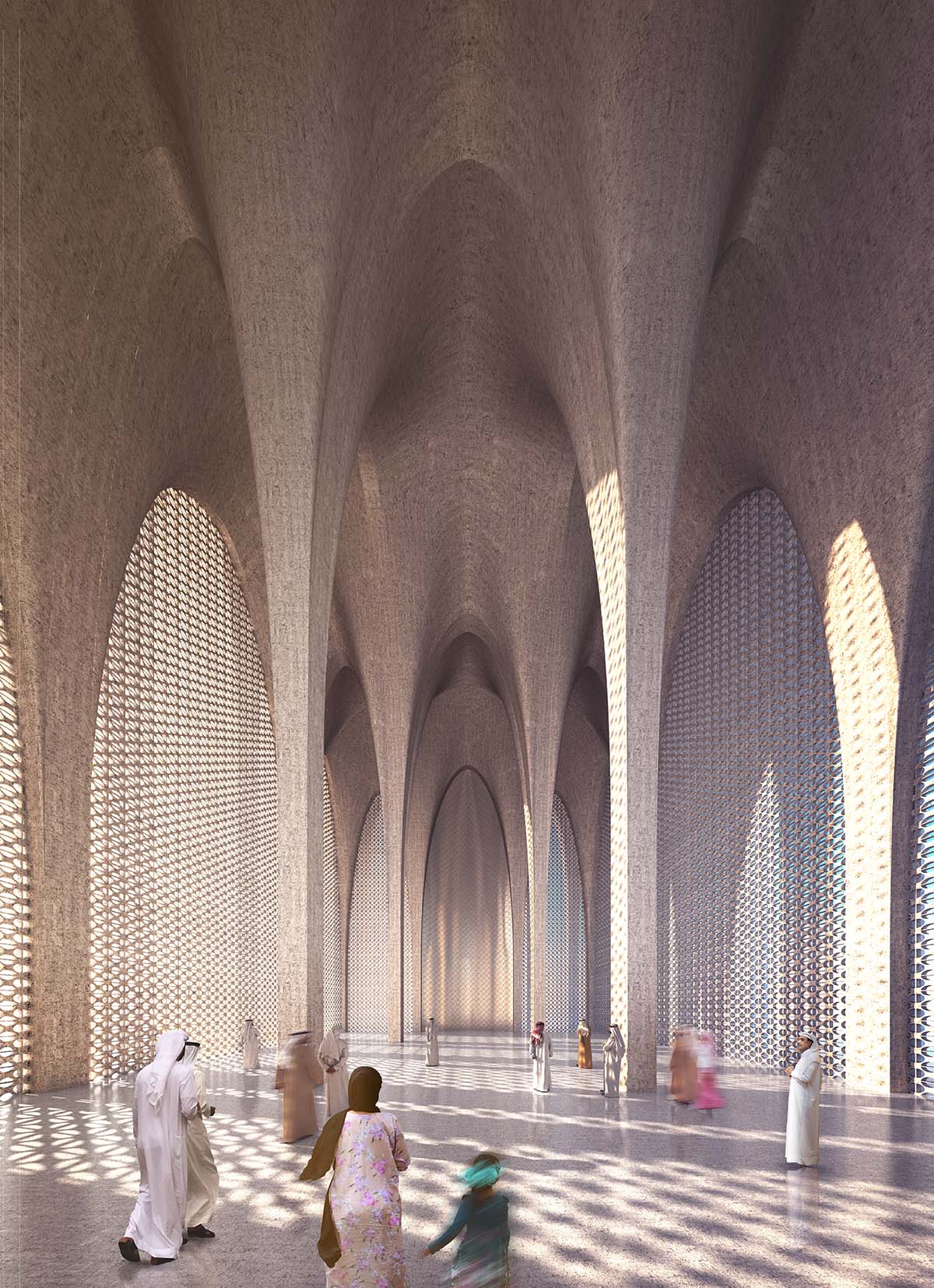 The interior of the buildings presents a different kind of spiritual atmosphere in which its outer skin and porous form are reflected through light. In the Synagogue, the visitors will welcome with high ceiling and wooden seating places that are scattered randomly. They will be able to feel the ceiling of structure from inside with crossed supporting concrete elements. 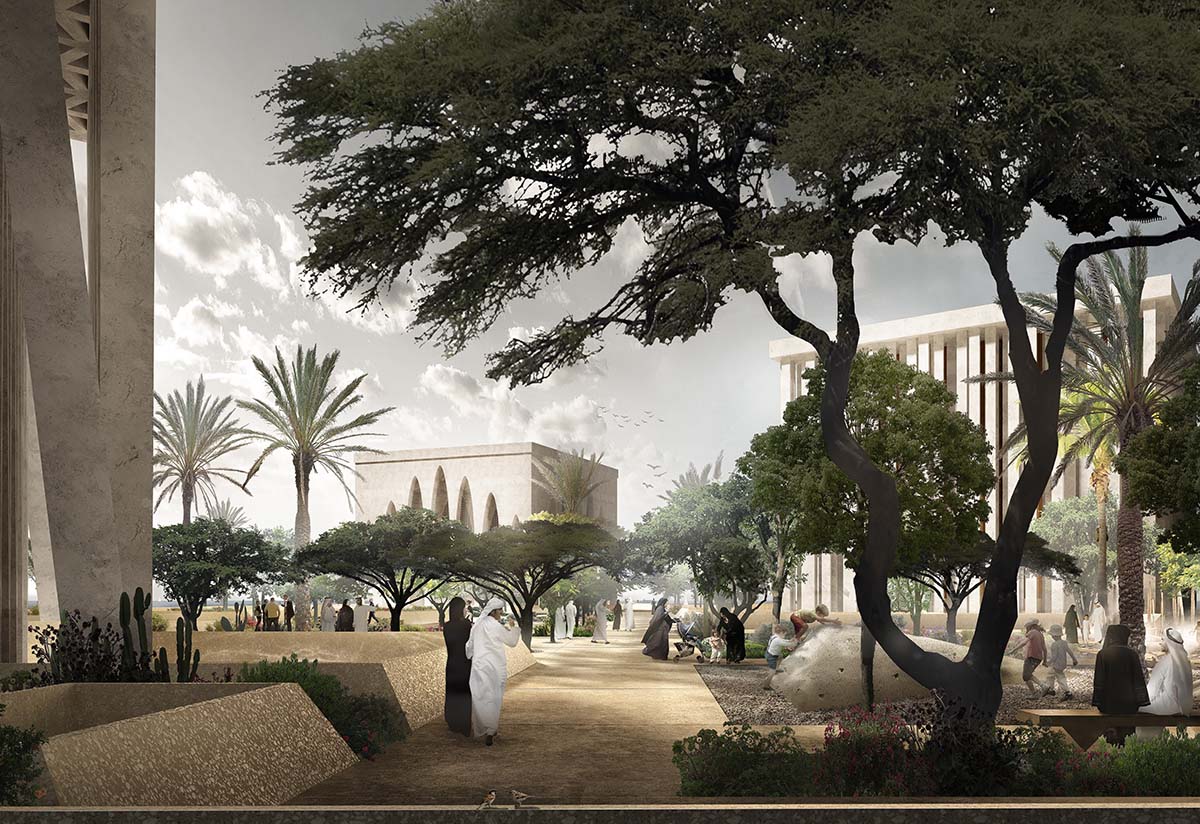 The interior of the Church features thousands of wooden pieces that are suspended from the ceiling. The form of the ceiling presents unprecedented atmosphere that contributes another spiritual ascent.

"The contemporary design was chosen after a rigorous process that included architects of diverse backgrounds and faiths from around the globe," said The Higher Committee commented on the competition result. 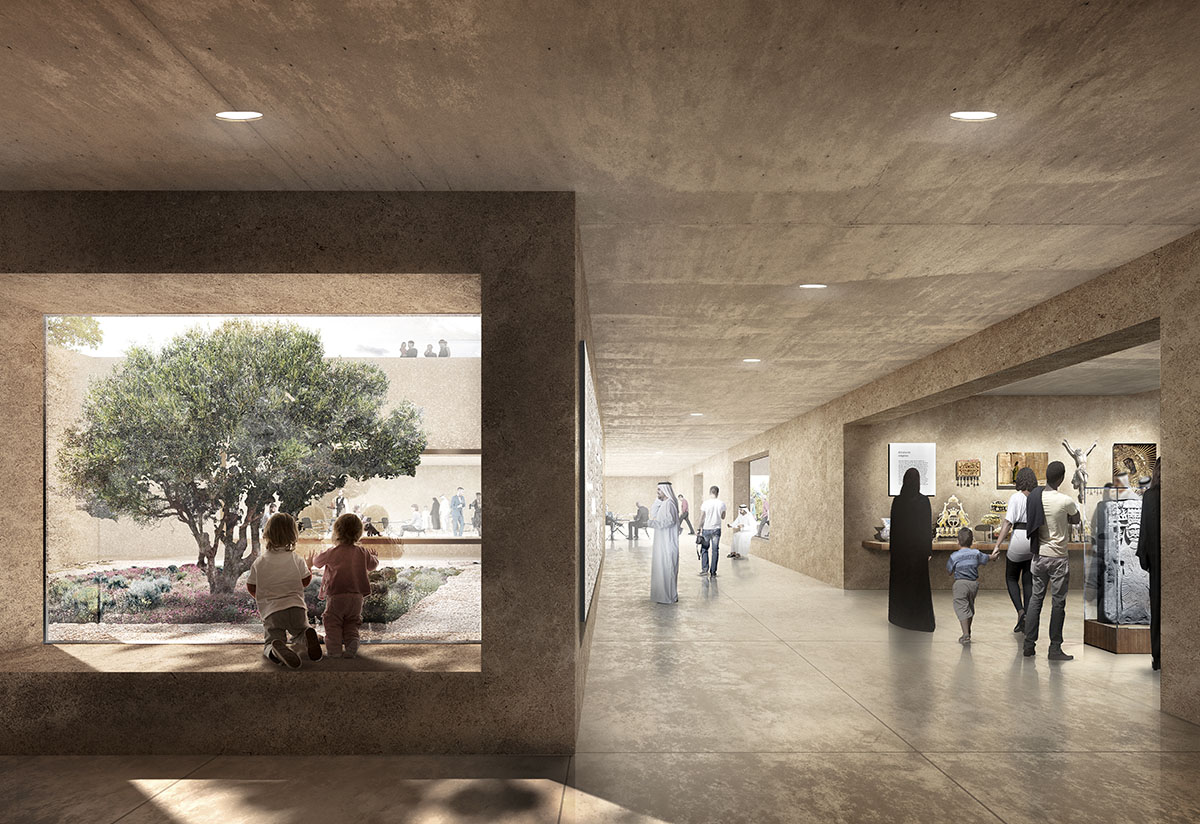 "Adjaye Associates design is particularly striking, incorporating separate worship spaces for each religion as well as a shared space for collaboration and informal gathering," said The Higher Committee commented on the competition result."

"As a modern design concept it also reflects the goal of creating an enduring space for future generations." 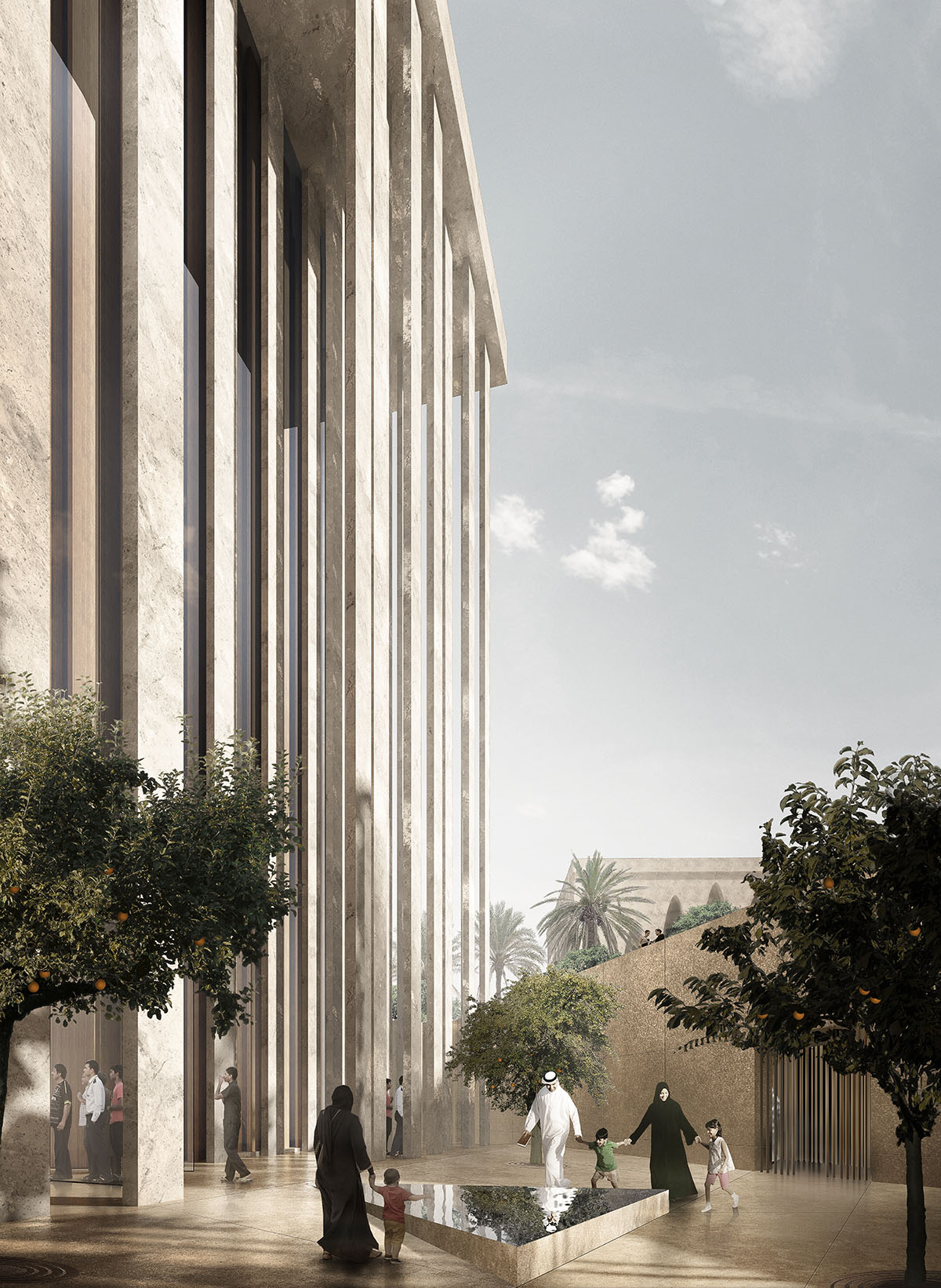 His Highness Sheikh Mohamed bin Zayed, Crown Prince of Abu Dhabi and Deputy Supreme Commander of the UAE Armed Forces, who hosted Pope Francis in Abu Dhabi earlier this year, welcomed the progress made in realizing the ambitions for peaceful coexistence expressed in the Human Fraternity document. He also commented that the UAE was pleased to support initiatives like this that foster tolerance, co-operation and coexistence. 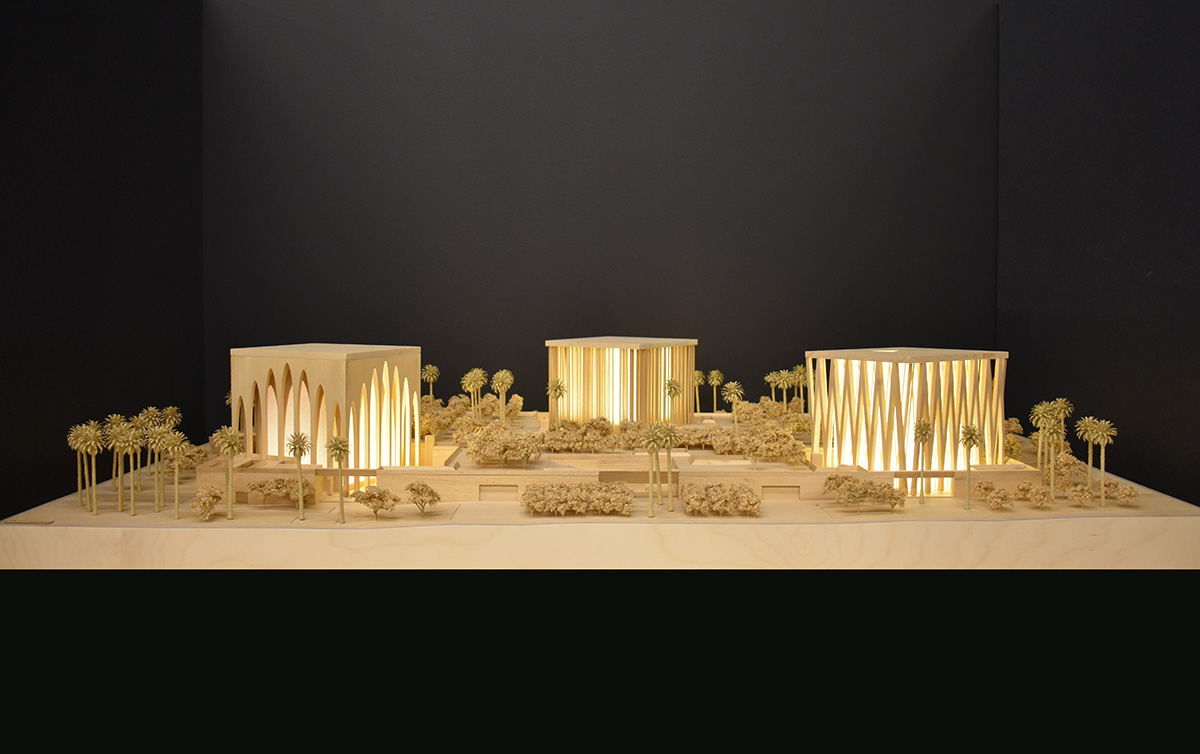 The practice’s largest commission to date, the Smithsonian National Museum of African American History and Culture, opened in 2016 on the National Mall in Washington D.C.