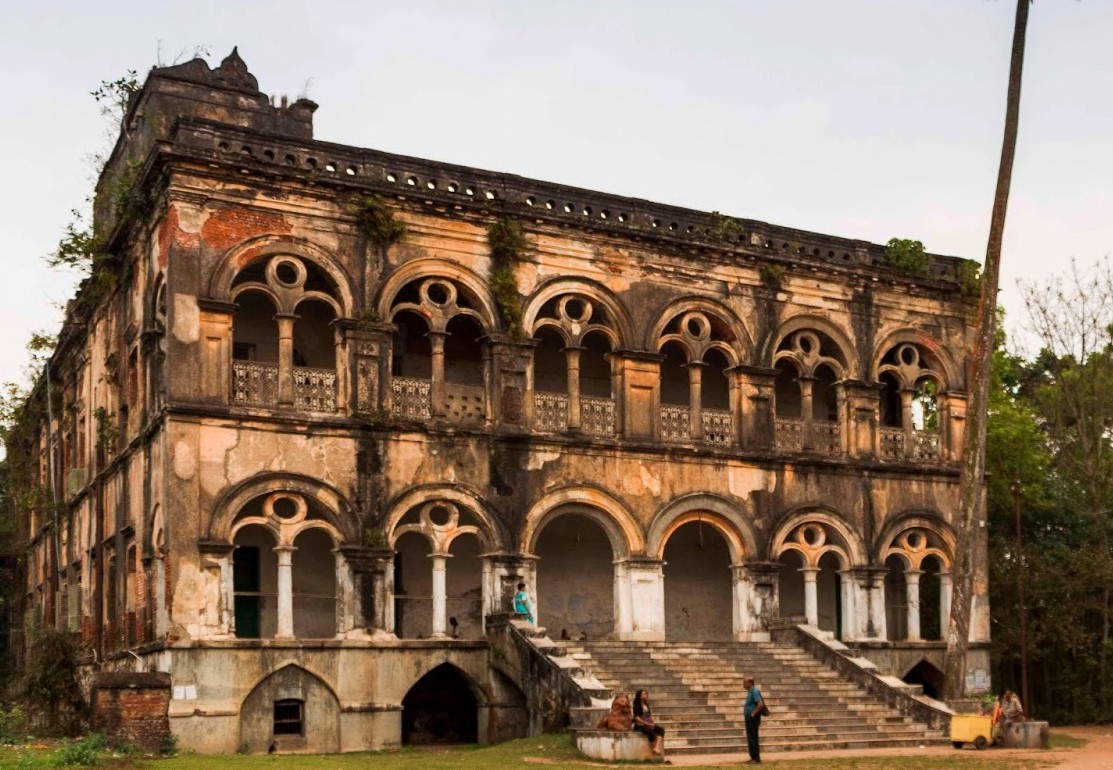 Our history creates a great impact on shaping our future. The ancient technologies adopted by our very own ancestors is extremely iconic. During the early times, there was an ecological balance maintained amongst the human and natural environment. They believed in amalgamating the nature with the building to create a picturesque scenario so did not harm the natural beauty of the environment. India at present boasts about 3650 approximately renowned ancient heritage structures and sites of national importance. Highlighted here is a regional study of the ancient construction techniques of Bengal and its undiscovered historical beauty.

India has been recognized worldwide for its variant culture and its contribution to the same. If each and every heritage structure are taken in account, a common factor that seems to be distinctive is its construction technique and structural stability which ensures its existence even till date in spite of witnessing calamities, manmade disasters and negligence. This promotes and renders to the rich cultural heritage of our country. Divided into its various architectural types and styles, each and every structure has its own individuality and speciality. Not sure if it is the contribution of the English or our very own Aryan ancestors in the field of architecture, these places do come up with innumerable unique techniques which are still being discovered. While some structures are under the protection of World Heritage Commission, Archaeological Survey of India or State Heritage Commission, there is also a shocking existence of more than 1 lakh structures, precincts and sites which are still unidentified and unprotected. Highlighting a particular region and its architectural style which was known for its simplicity and grandeur using locally available material.

One of the greatest discovery of humankind, which was previously unidentified in the land of West Bengal, India is Moyna Garh in Purba Medinipur district. The entire fort is encircled with two concentric wide moats with huge mounds stretching up to 13 acres. The only way to reach the fort is by boat. The first moat is at a distance of 200 metres from the second. Engrossed in lush concentric greenery, the fort creates a picturesque environment. With time and development, there is an existence of a single moat now. Presently, Moyna Garh belongs to West Bengal Heritage Commission. 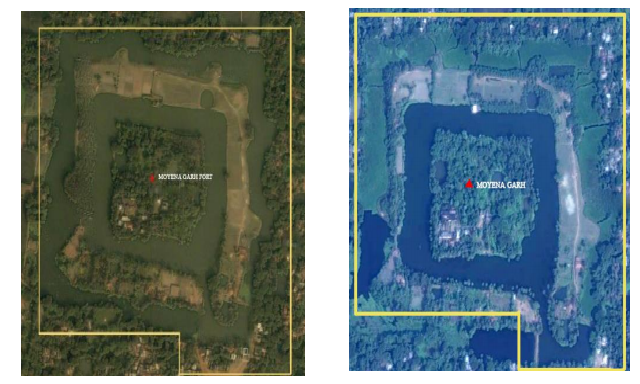 Satellite Image Of Moyena Garh Palace In 2014 And 2015, West Bengal

Another finest example that can be mentioned is the Mahisadal Rajbari which is also in Purba Medinipur district built by the Garg family in the 18th Century. The unique fort stands alone as one of the greatest examples of the building construction techniques amalgamating both European and Bengal architectural styles and methods of construction. The gigantic Nava-Ratna temple of 35 feet height, within the vicinity, is a marvellous construction technique. 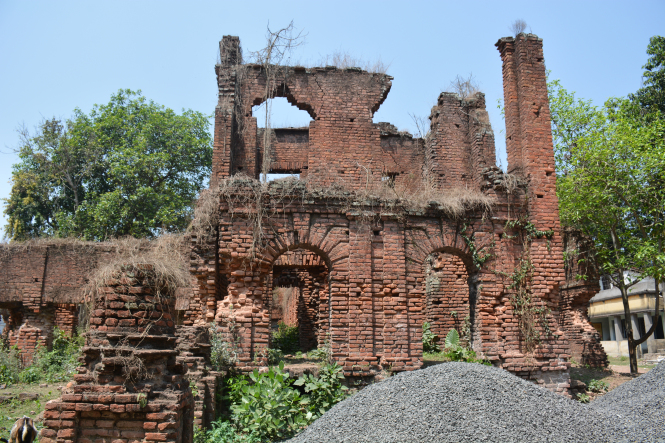 Setting an example amongst the other well-recognized structures, the historical precincts has also fulfilled the need of utilizing innovative techniques during the early times. For example, a natural security scape is seen to be developed encircling the huge moat of Moyena Garh for the protection of the structures.  It is believed that they developed bamboo plantation profusely all around the moat and infested crocodiles in the water in order to protect the island from the enemy attacks. The dense forest also included other wild animals and ready canons in every corner. This widely highlights the strong sense of security developed naturally within the area. There was a strong ecological field developed around the boundary. The location was self-sufficient and ensured sustainable resources.

All the forts during the earlier centuries had an essence of European architectural style. The huge load-bearing structures were supported with a series of arches which helped in distributing the load evenly thereby maintaining rhythm and harmony. The buildings had a courtyard planning technique involved which intensifies natural ventilation. The construction technique was simple yet outstanding. The ultimate calculation of load-bearing wall made of brick construction was one of the most innovative methods adopted by the people. The brick arches acted as a load-bearing medium on which the load of the upper storey was given. It also acted as brick lintel on which the load acted upon. The Series Of Arches And The Courtyard Inside Tamluk Palace, West Bengal

The common material used for the building construction were burnt clay bricks and lime mortar. The bricks were of a smaller size with a height of 2 inches, made in the temporary kiln constructed within the site. The pillars were also made with brick giving it its own shape, usually circular. The roof on the interior of the temple was domical yet seems flat from outside. This method was adopted in order to make the structure heat resistant. The intelligent utilization of round arches and multi-foiled arches are seen which helps in transmitting the heavy load without damaging the structure beneath it thereby enhancing cost reduction.

Dakshineshwar Kali temple in Kolkata, was founded by Rani Rasmoni in 1855. The structure reflects typical Bengal architectural form with ‘Nava-Ratna’ style or nine spires evenly distributed on each corner and the centre of the upper-storey. The construction of this spires was done with materials like brick and lime mortar. The interior of the temple has a vaulted roof. The three-storeyed temple stands on a high platform with a flight of stairs. The beautiful multi-foiled arched entrance enhances the aesthetic look of the structure whereas functionally ensuring stability to carry the heavy loaded spires from the top. Arches are considered to carry heavy loads and also reduce the cost of construction. The flat roofs of any religious temple always had domical roofing in the interior. It was believed that this method of construction reduces heat inside the building. The gap between the flat rood and the dome generally had a mud and rice husk filling to prevent it from heat transfer inside it. 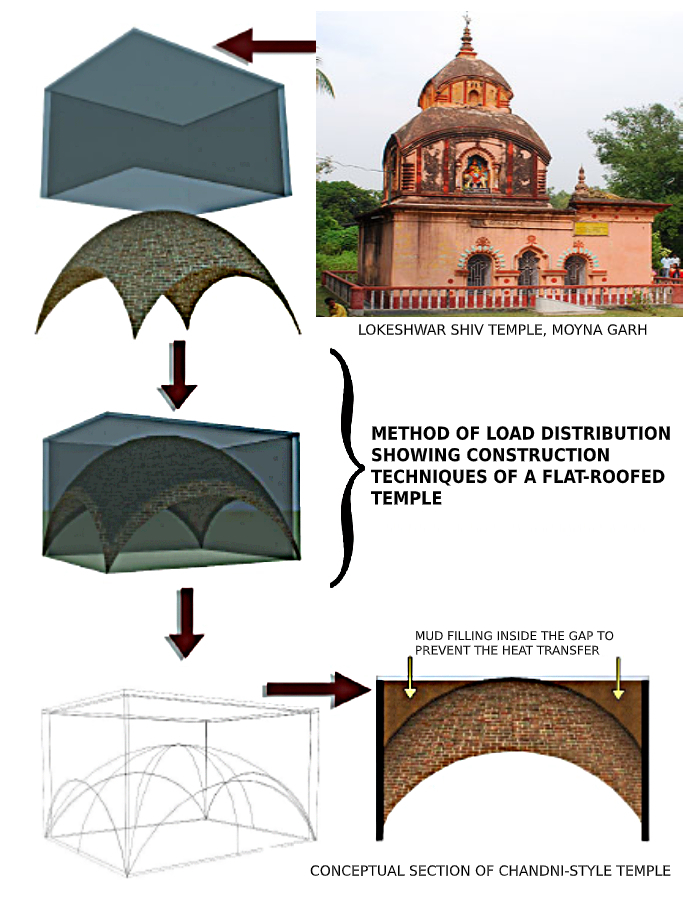 The columns were also made up of brick. This helped in less usage of cement concrete and also helped in building the strength of the structure. 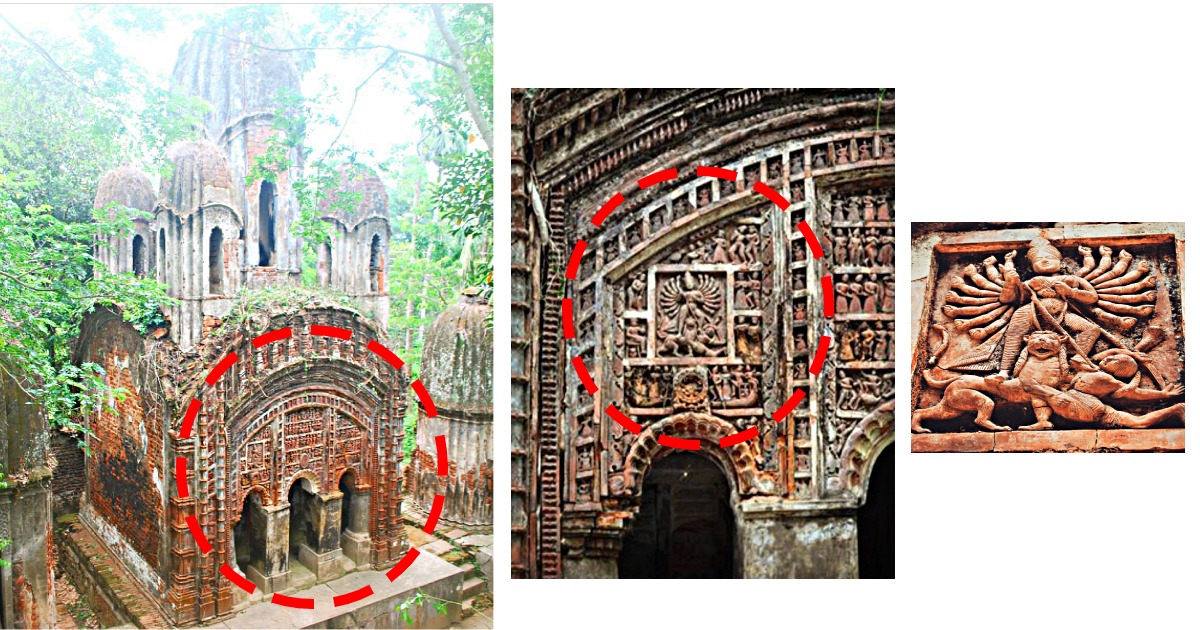 Ultimate and fine detailing on the outer façade was made of Terra-cotta tiles curved in various motifs and figures. It was the most inexpensive and common method of decoration used during earlier times. Curved into various shapes or human forms, these tiles highlighted its various mythological characters or scenes. In residential buildings, pilasters with beautiful flower motifs served as a unique method of ornamentation. The creation of grandness and detailed decorations made the outer façade look more attractive. How enriched and extravagant outlook can be created by using low-cost decoration techniques is to be learnt from history. Neither of the structures involved heavy construction techniques yet stood outstanding.

The inferences drawn from these examples and structures reflect the various marvellous methods of building construction techniques adopted by the people of the early 18th Century. Innumerable other methods like the usage of Domes and other Gothic architectural forms were also seen. The low-cost vernacular houses maintained a very minimum usage of resources. Mud and rice-husk mainly acted as a common ingredient. These houses were made up of either raw clay mixed with rice husk or clay blocks later plastered with mud or lime mortar. These houses generally reached up to three-storeys high with a sloping roof supported by a wooden truss.

As well said by Mark Twain, “History doesn’t repeat itself, but it does rhyme.” We can easily link our past ideologies into the present context by adopting their technologies. Every location serves as an eminent part. These few examples of historical buildings have given us the slightest ideas about how we can uplift the past and implement them in modern technologies. The essence that has been lost can be incorporated in the future. There is no point harming the agenda they have set for us. There must be a unique feature of the construction techniques our ancestors had adopted. Every structure has witnessed calamities and human negligence and still stands still. Barely 35% of the total unidentified structures seems abandoned or ruined totally. Otherwise, when restored and taken care of, they boast itself and stands iconic.

Ath-Chala: Typical Bengal architectural style. Single square or rectangular chamber having four sloping roofs and a duplicate miniature version of same structure roofs (curvilinear or straight) on top of it.

Chandni: Flat-roofed temple, square or rectangular smaller in size with not more than three entrances.

Nava-Ratna: Typical Bengal architectural style. Additional nine spires evenly distributed in the centre and four corners of the roof in a religious structure.

All images Courtesy of Arindam Bhowmik and Rupsha Chakraborty.