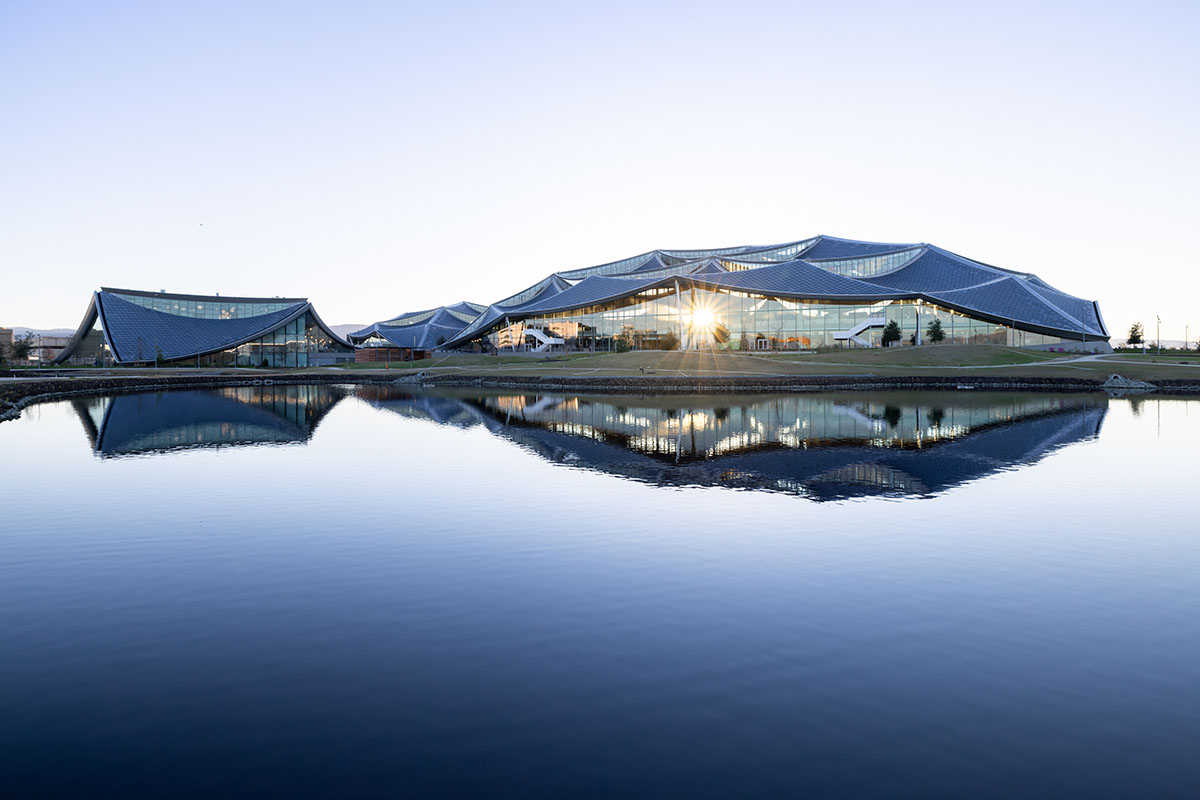 Google's Bay View campus was officially opened on 17 May in Silicon Valley. 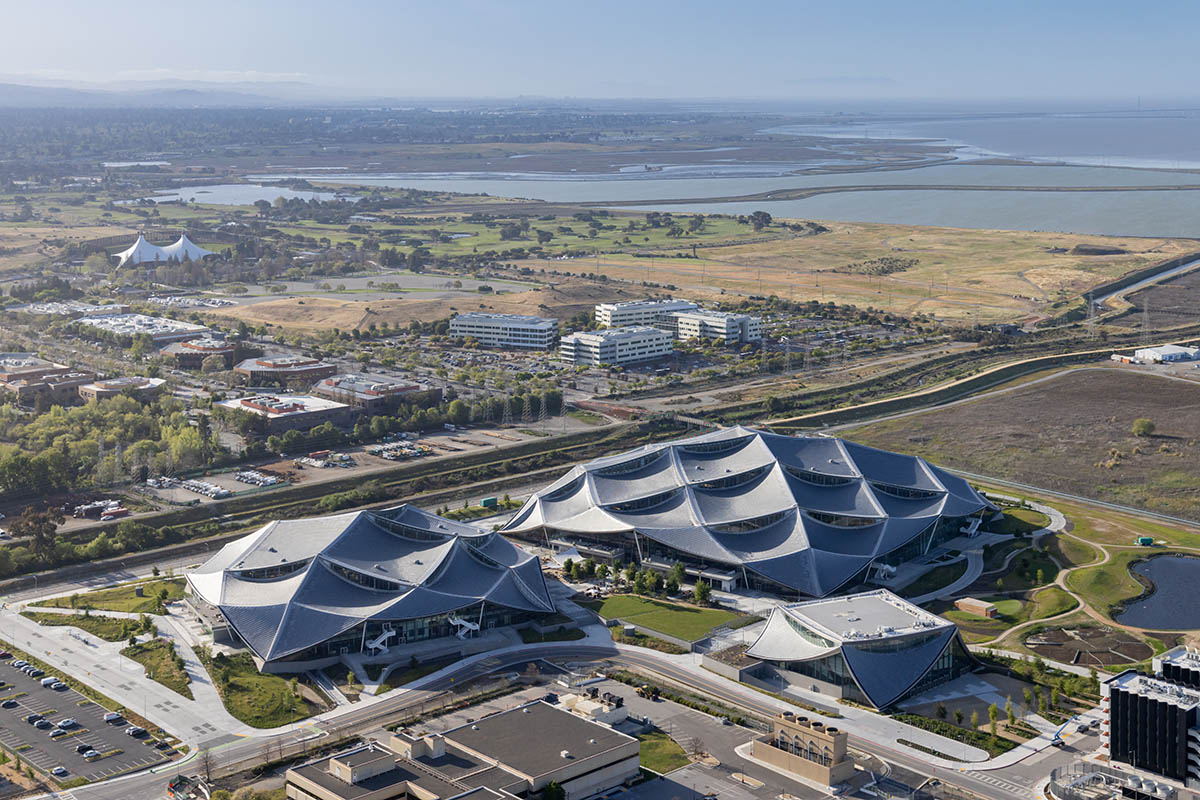 Designed to make "an environmental statement through its emphasis on sustainability", the buildings feature flowing, tent-like roofs made of dragonscale solar canopies.

Described as "a first-of-its-kind" for its dragonscale” solar skin, the roofs are equipped with 50,000 silver solar panels. Thanks to concave shaped of the panels, the buildings will be able to generate 7 megawatts of energy - which will meet roughly 40 per cent of the buildings' energy needs, according to Google. 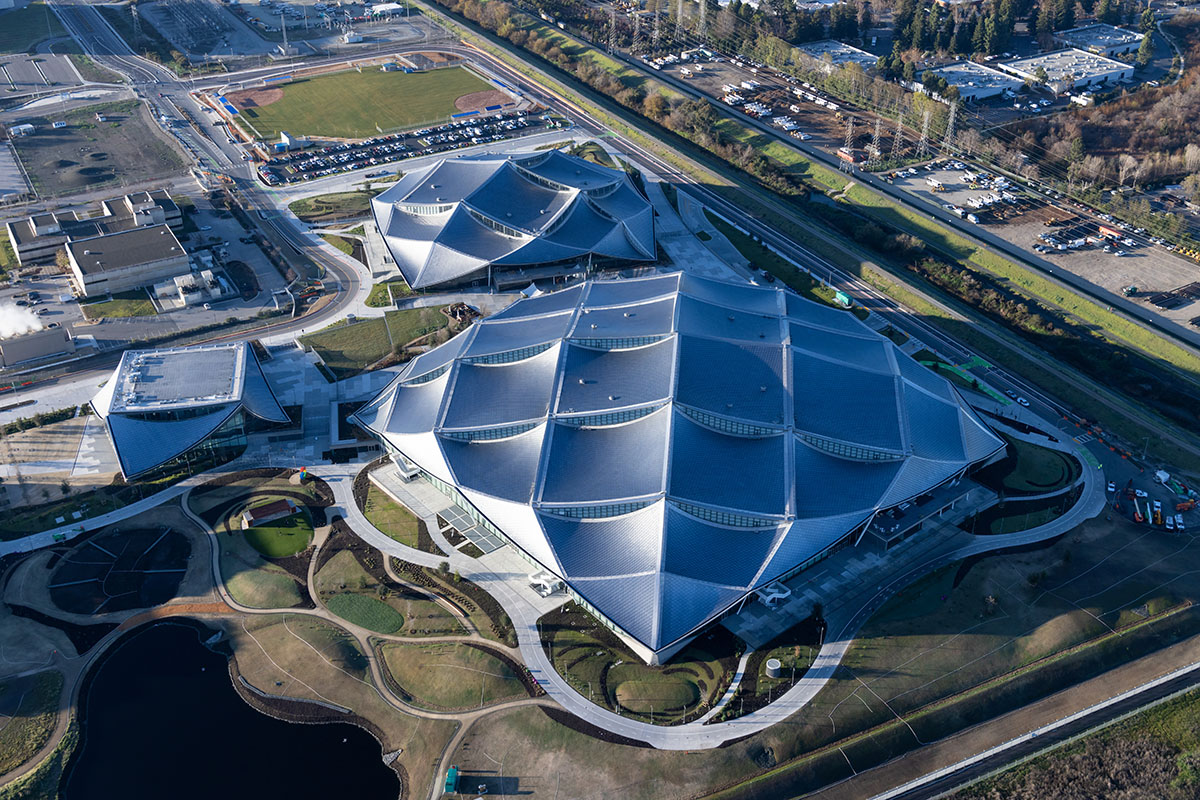 Focusing on Google's vision on human-centric design with sustainable innovations for the future of Google’s workplace, BIG and Heatherwick Studio designed lightweight canopy structures that can be optimized according to interior daylight, views, collaboration, experiences and activities.

The construction of the new Google campus is envisioned as scalable and offered replicable and adaptable solutions for the future demands of Google employees. 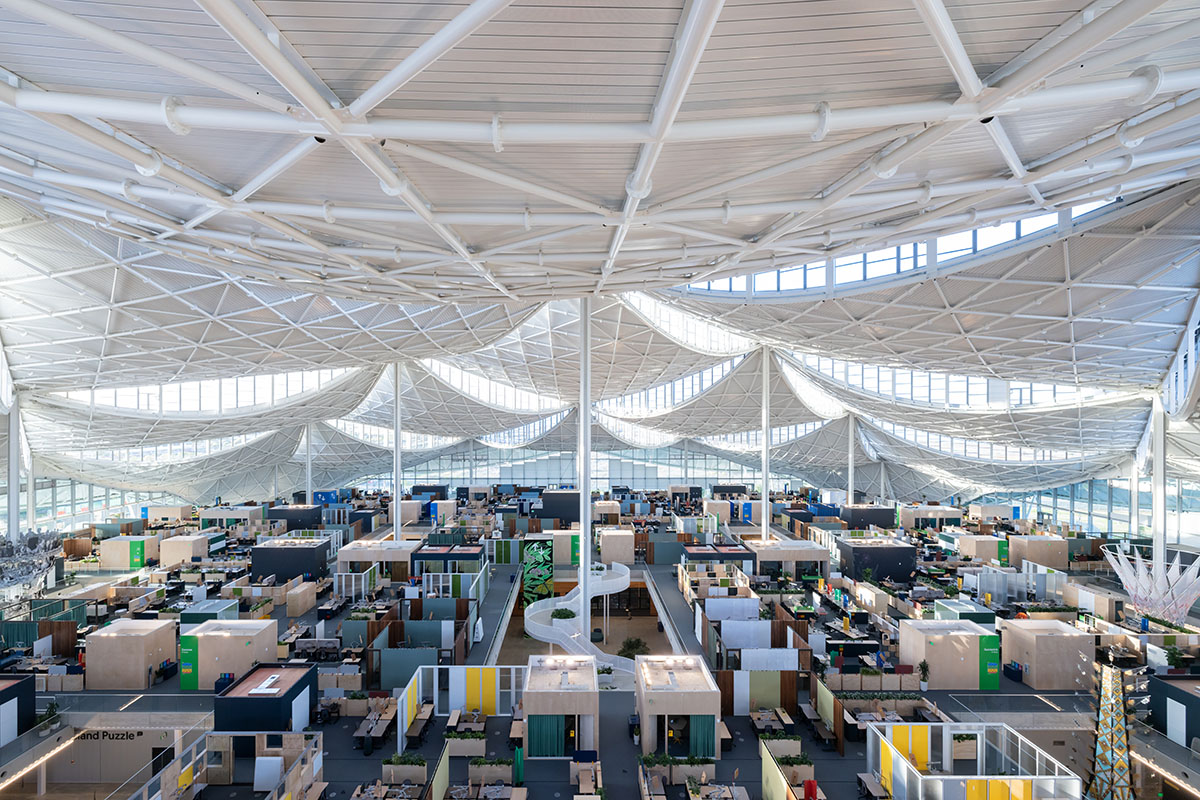 "Our design of the new Bay View campus is the result of an incredibly collaborative design process. Working with a client as data driven as Google has led to an architecture where every single decision is informed by hard information and empirical analysis," said Bjarke Ingels, Founder and Creative Director, Bjarke Ingels Group.

"The result is a campus where the striking dragonscale solar canopies harvest every photon that hits the buildings; the energy piles store and extract heating and cooling from the ground, and even the naturally beautiful floras are in fact hardworking rootzone gardens that filter and clean the water from the buildings."

"All in all, a campus where front of house and back of house, technology and architecture, and form and function have been fused into a new and striking hybrid," Ingels added. 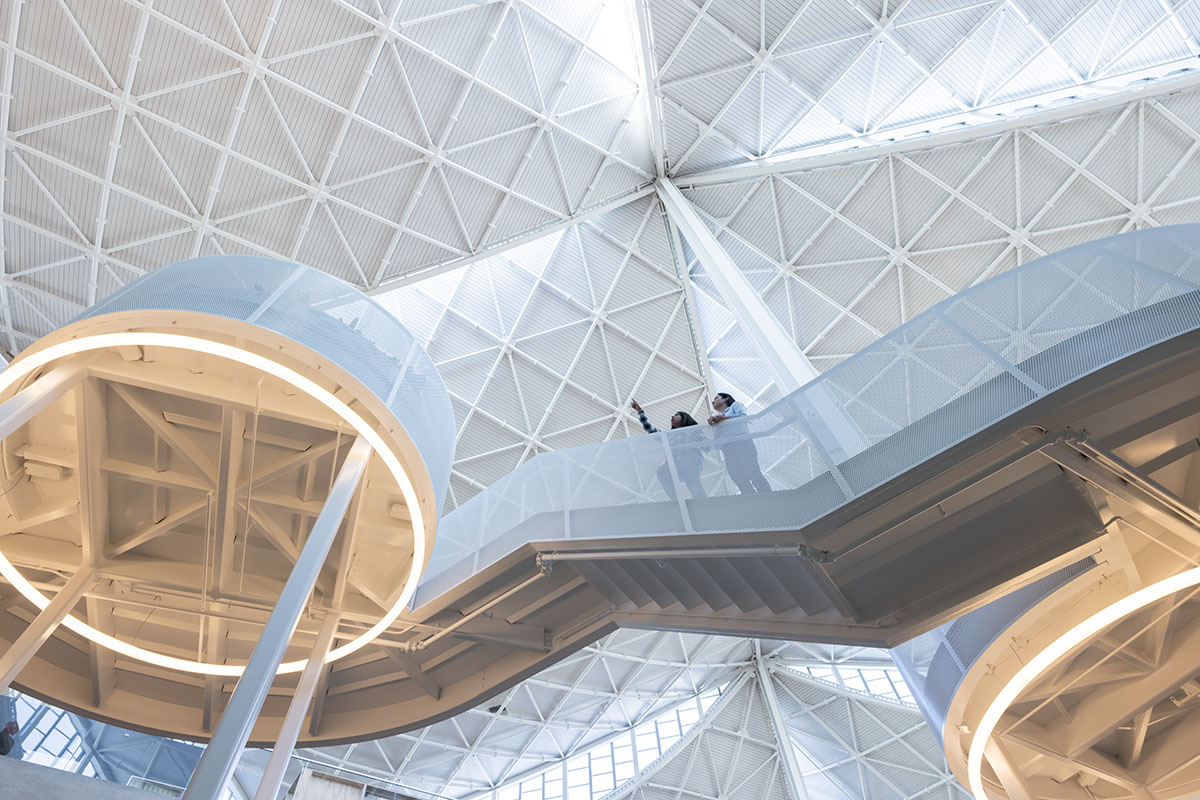 A detailed view to the canopy ceiling

The three buildings are shaped around specific themes defined by Google’s design brief at the beginning of the project: Innovation, Nature and Community.

While team spaces are designed on the upper level, common spaces are placed below, "separating focus and collaborative areas while still providing easy access to both," explained by BIG.

"The second floor design has variation in floorplates to give teams a designated “neighborhood” area that is highly flexible to change with their needs," BIG added.

"The idea of the ‘office’ has been stuck for a long time. Yes, people have done different aesthetic treatments. But there hasn’t been a fundamental questioning of the workplace at this scale," said Thomas Heatherwick, Design Director, Heatherwick Studio.

"Our approach has centred on the emotions of individuals and the imaginations of teams and how you create a whole different atmosphere of work," Heatherwick added. 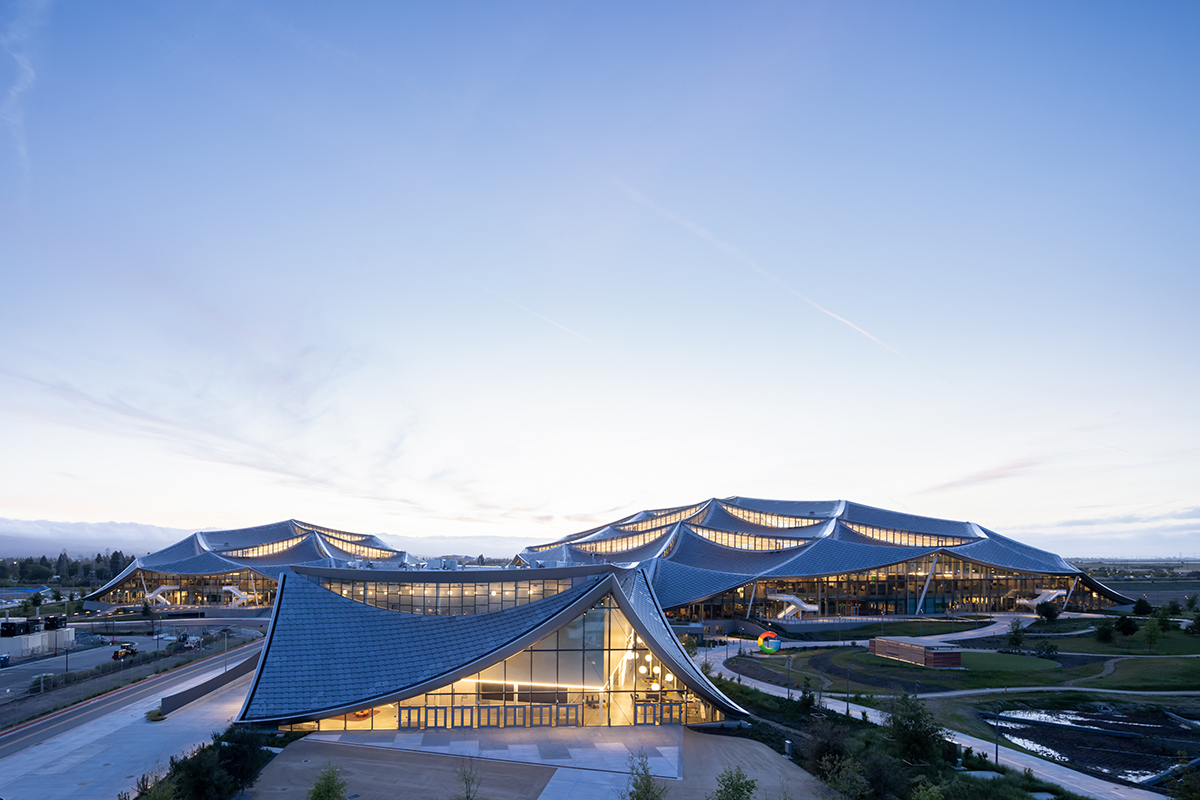 Inside, the team creates a series of indoor “courtyards” throughout the buildings to connect the two levels. These courtyards also provide teams easy access to cafes, kitchenettes, conference rooms, and all-hands spaces.

The courtyards also proposed to "encourage the physiological benefits of physical movement when circulating between levels and different modes of work, and double as wayfinding devices."

For the design of the canopies, the team devised large spans with average orthogonal column spans, which enables the entire second-level workspaces to be open and connected under one roof.

Due to large spans, the workspaces can benefit from natural light and views, offering reduced glare through carefully designed clerestory windows punctuating the canopy.

"Rather than being segmented by excessive columns and support walls, the structural innovation of the canopy roof allows for a wide-open workspace," said BIG.

"Every person has equal access to views across the floorplate, and through the perim­eter facade and clerestory windows to the outdoors."

"Google Bay View offers a workplace experience that is an antithesis to an urban high-rise; Containing as much area as the tallest office tower in San Francisco, the typically stacked floorplates are redistributed into a flat array, creating a vibrant village," said Leon Rost, Partner, BIG-Bjarke Ingels Group.

"While on-site carbon and water neutrality is challenging for skyscrapers, this bay-scraper typology enables us to harvest the power of the sun, earth, and water."

"We hope Bay View will provide a quantum leap in the evolution of the workplace, elevate the benchmark for sustainable design, and inspire the next generations of users and visitors to the building," Rost added. 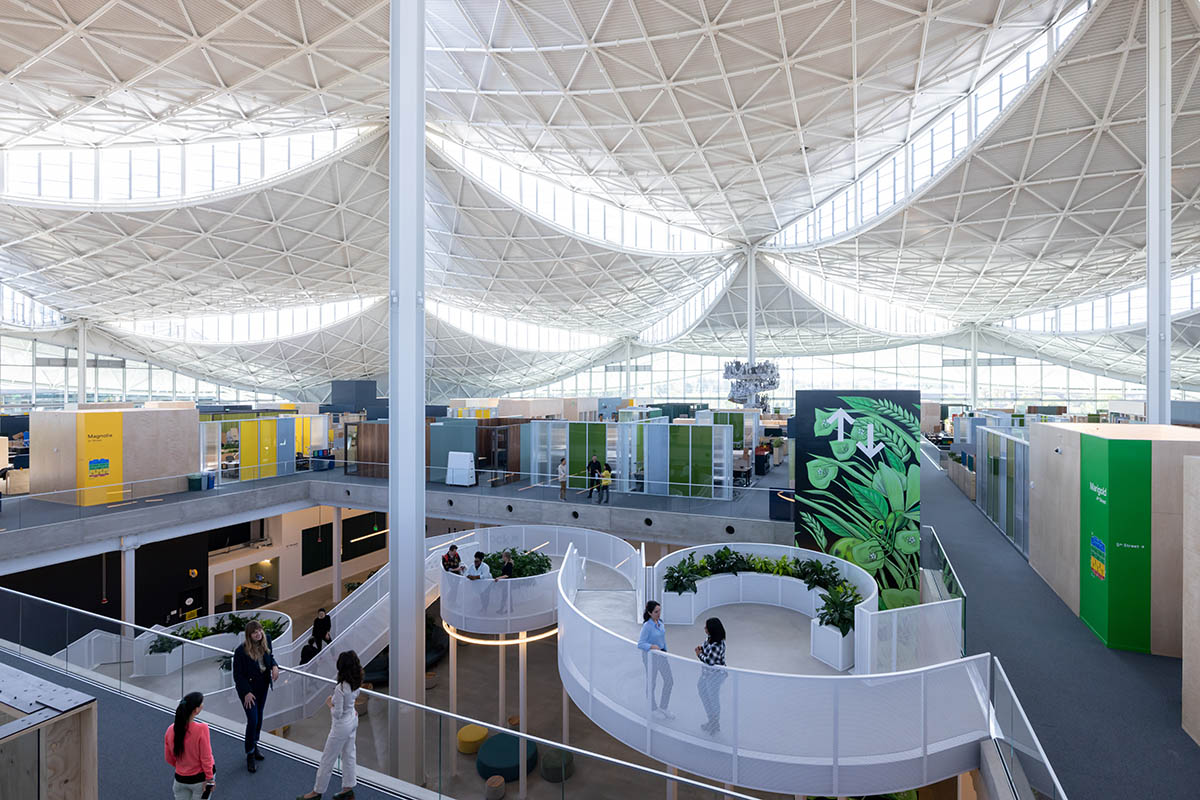 From Ban View's mothership stair and the second floor neighborhoods

Other sustainability features also include an integrated geothermal pile system, which is the largest in North America. Google estimates that this system can reduce carbon emissions by roughly 50 per cent and will help both heat and cool the campus.

In addition, the massive geoexchange field is integrated into the structural system. This will reduce the amount of water typically used for cooling by 90 per cent, equal to five million gallons of water annually, according to Google.

Bay View is 100 per cent electric where even the kitchens are electric to decrease carbon emissions. 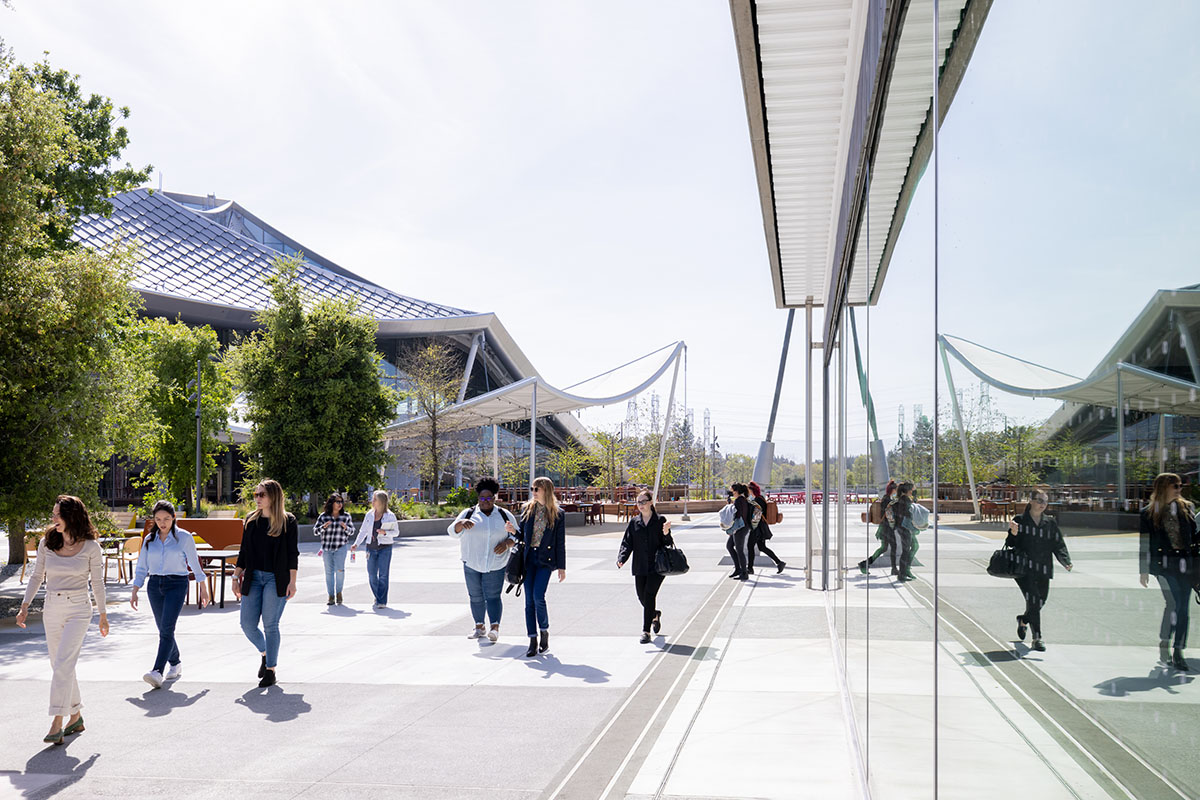 Google also added that "To help deliver on its commitment to replenish 120 per cent of the water it consumes by 2030, the site is net water-positive with all non-potable water demands being met using the recycled water it generates on site."

"A series of above-ground ponds gather rainwater, combined with a building wastewater treatment system, together serve as a water source for cooling towers, flushing toilets, and landscape irrigation," Google emphasized.

The campus includes 17.3 acres of high-value natural areas – including wet meadows, woodlands, and marsh – that contribute to Google's broader efforts to reestablish missing essential habitat in the Bay Area. 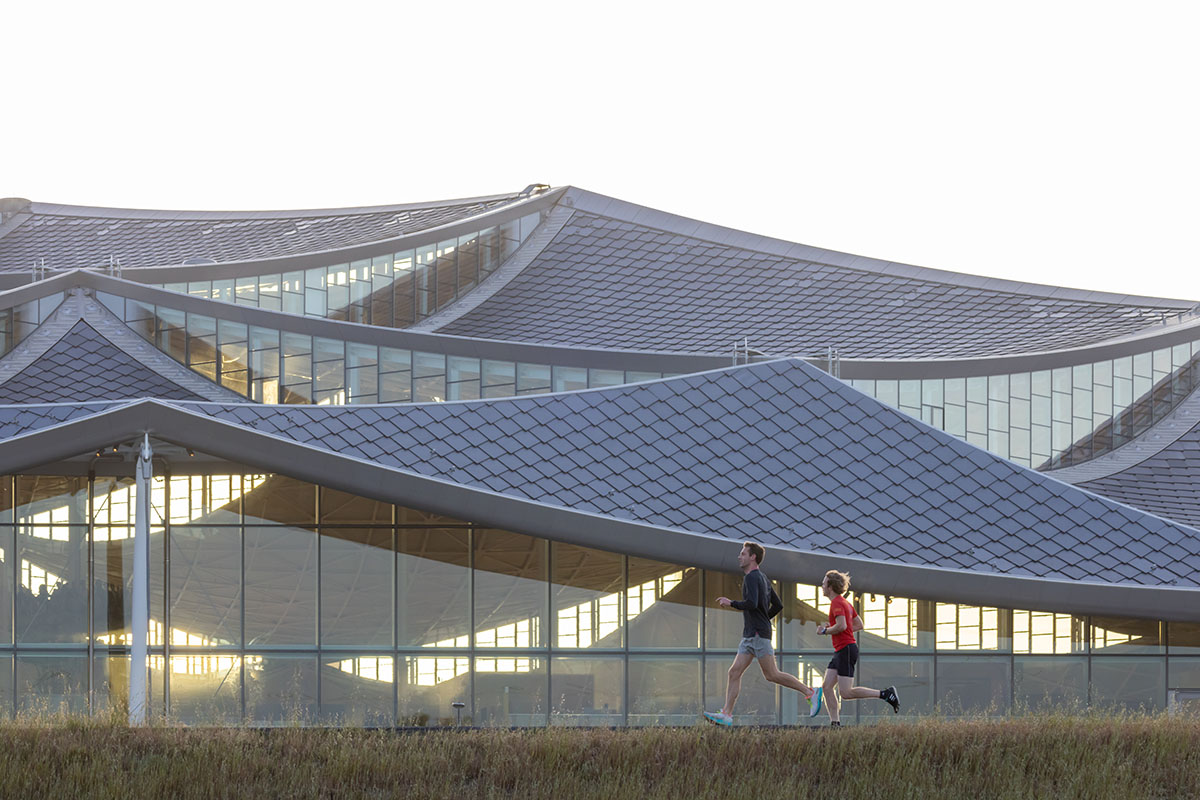 The ventilation system in the campus uses 100 per cent outside air, which means air flows one way, so there is no recycled air, which is much healthier for occupants.

Moreover, to remove toxins and create the healthiest environment possible, the project team vetted thousands of building products and materials — everything from carpet tiles, paints, piping, plywood and furniture were evaluated using the Living Building Challenge (LBC) Red List as a framework.

The buildings also feature nine pieces of artworks belonging to local Bay Area artists on and around the nine two-story elevators. These artworks do not only depict Bay Area ecology scenes, but they also help with wayfinding in the building. 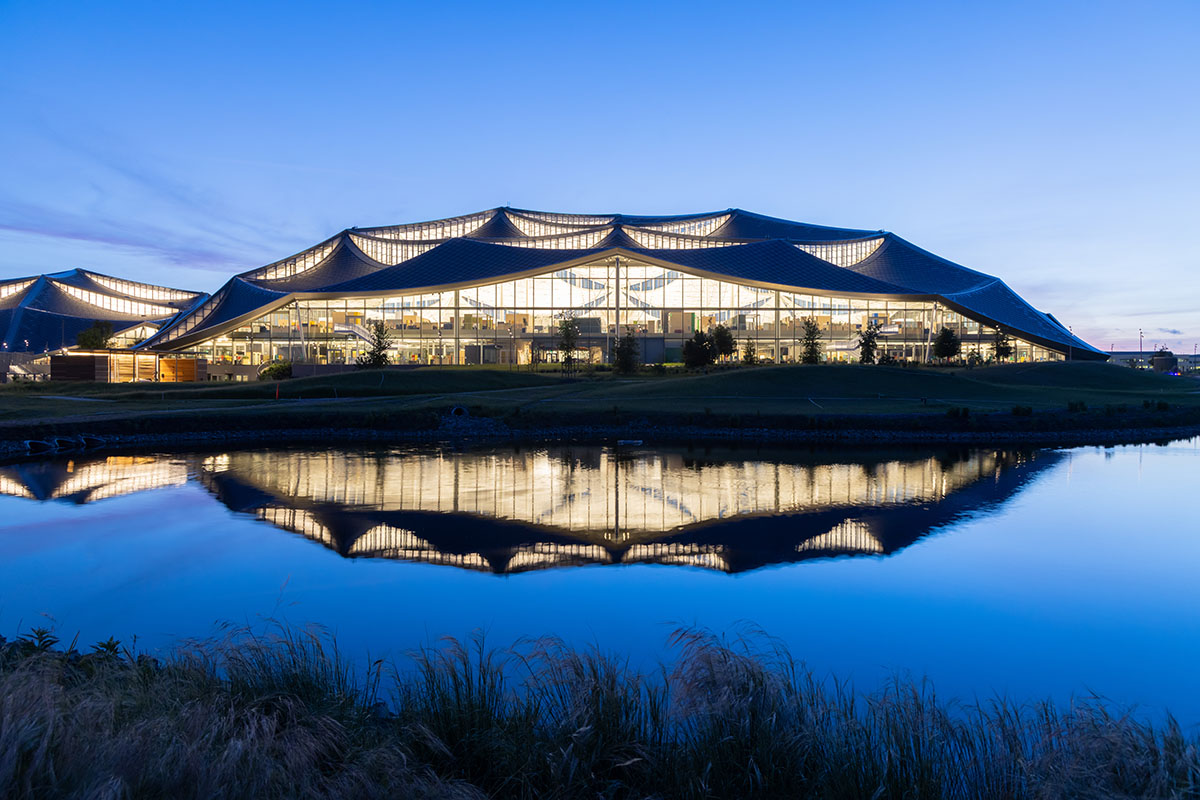 Bay View's larger building at twilight reflects in the stormwater retention pond, part of the water-positive design of the campus 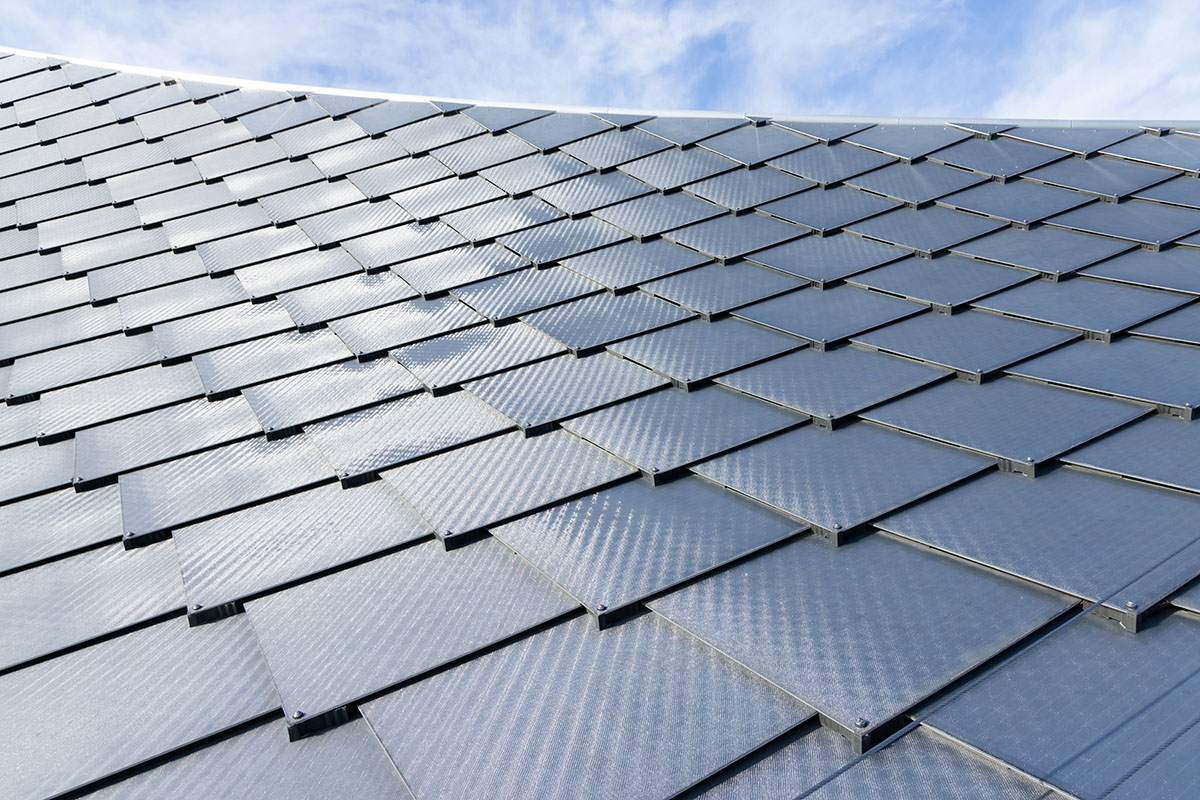 Sustainability is at the core of the Bay View campus. As Google explained, the site is expected to meet a LEED-NC v4 Platinum certification and become the largest facility ever to achieve the International Living Future Institute (ILFI) LBC Water Petal Certification.