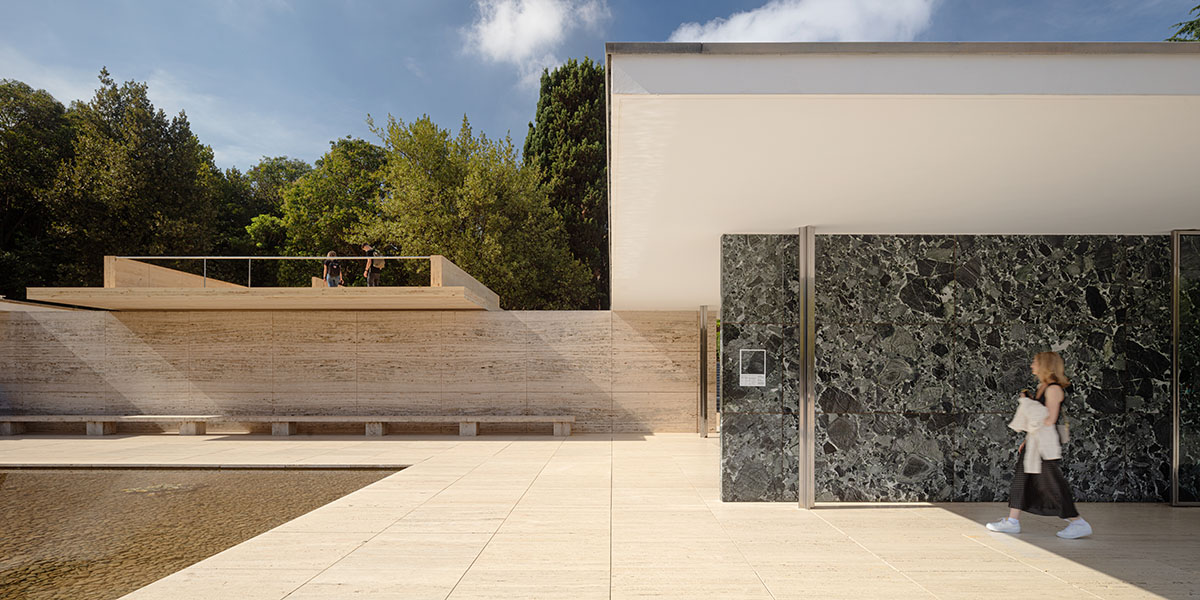 The Institute for Advanced Architecture of Catalonia (IAAC) and Berlin and Potsdam-based non-profit organization Bauhaus Earth have added a mass timber installation to the Mies van der Rohe Pavilion in Barcelona, Spain.

The project, called Mass Is More, aims to create a dialogue between the past and the future of wood and an exhibition that explores the use of biogenic materials for architecture.

Almost a century after the construction of the German Pavilion designed by Ludwig Mies van der Rohe and Lilly Reich, the project establishes a bridge between the industrial modernity of the 20th century and the new low-emission buildings of the 21st century. 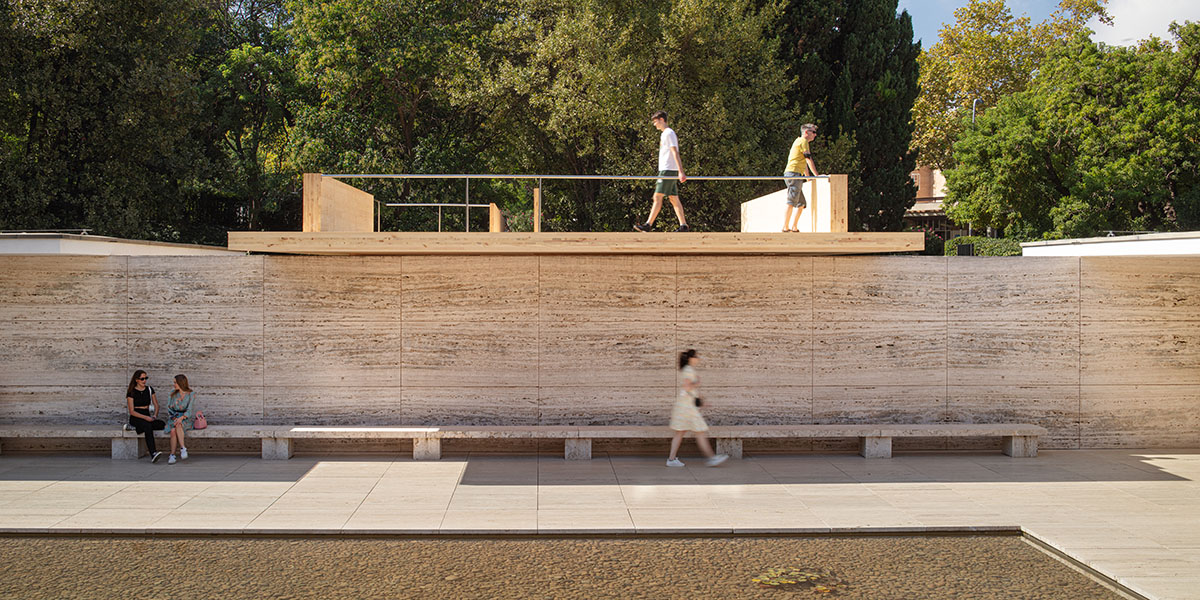 Mass Is More project, created by Daniel Ibáñez and Vicente Guallart of the Institute for Advanced Architecture of Catalonia (IAAC) and Alan Organschi of Bauhaus Earth (BE), opened to public on 1 October and was on display until October 9 at the Mies van der Rohe Pavilion in Barcelona.

The installation was made of locally sourced wood, showing the potential of building with regional timber on a mass scale.

The installation explores the use of regenerative and decarbonizing architectural materials in modern buildings. By reconsidering the materials being used in the original pavilion, this new installation reflects on how to regenerate our cities through the use of low-emission practices in order to achieve the EU’s environmental targets for 2050. “Mass is More” will also host the launch of Mass Madera, a network of Spanish pioneers in industrialized solid wood construction, including cities, governments, companies, organizations and architects from around the country.

This network is being coordinated by IAAC, whose main objective is to promote the development of mass timber construction, and the reduction of CO2 emissions associated with it.

The pavilion is also the host of the biennial European Union Prize for Contemporary Architecture / Mies van der Rohe Awards, attesting to the role and influence of the Fundació Mies van der Rohe in the current architectural discourse.

Adhering to the architectural language of the pavilion, this new installation creates a dialogue between the most advanced materials of the 20th century and the 21st century. Through a series of elements made of Cross Laminated Timber (CLT) panels from local forests, this installation demonstrates the structural capabilities of this new materiality and its suitability for constructing more sustainable buildings with a much lower environmental impact. 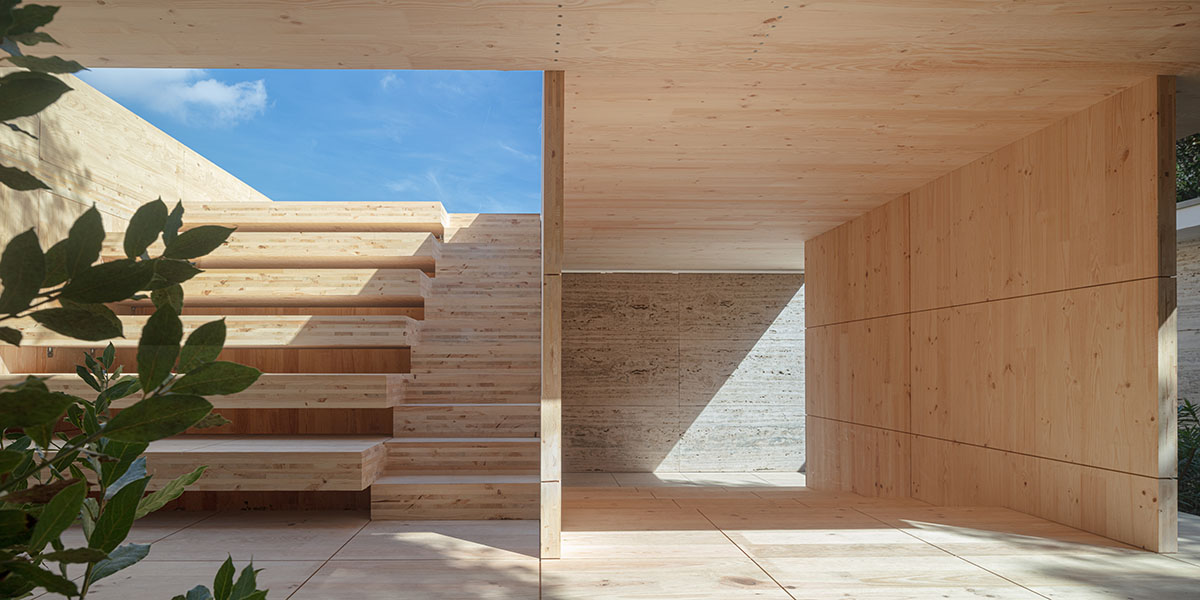 All the pieces that make up this installation have been produced by Xilonor, the most advanced Galician CLT company in Spain, part of the FINSA group.

The design of the installation reflects the formal grid of the original pavilion, creating an alternative narrative and a different way of experiencing the site with new pathways and view corridors. Throughout the tour visitors will be able to see different uses and representations of wood and modern building technology.

The entrance to the space inverts the traditional circulation, offering the opportunity to first pass through the trees in the garden behind the pavilion. An elevated walkway leads to a cantilevered platform that offers unprecedented views of the Barcelona pavilion. This platform gives access to an auditorium where small meetings and talks will be held. 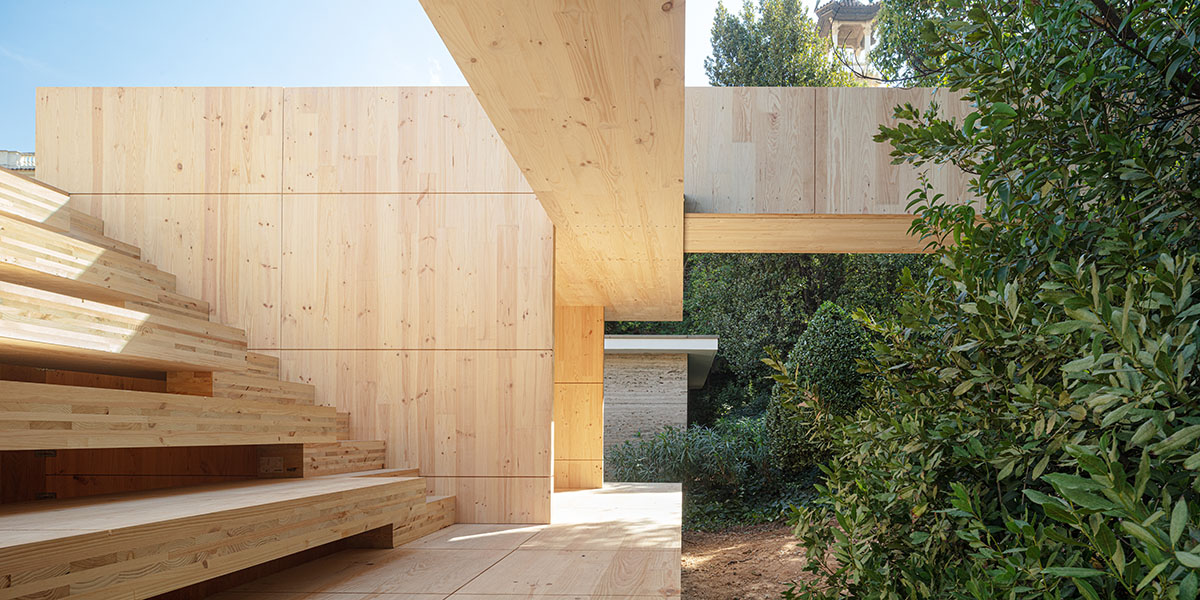 A 12 x 2.5 meter industrialized wood panel has been installed in the pavilion’s pond, illustrating the process used in the 19th century to transport the material directly from the forest to the factory via the river. On this panel the flamenco dancer José Manuel Álvarez gave a performance on the evening of October 4.

Inside, the pavilion’s luxurious onyx central wall is reinterpreted with new textures created from a CLT panel composed of multiple wood species. Illustrating the original geometry of the marble, the panel is subjected to a new digital milling process to create a warm and lush three-dimensional topography capable of revealing the various layers that compose it. 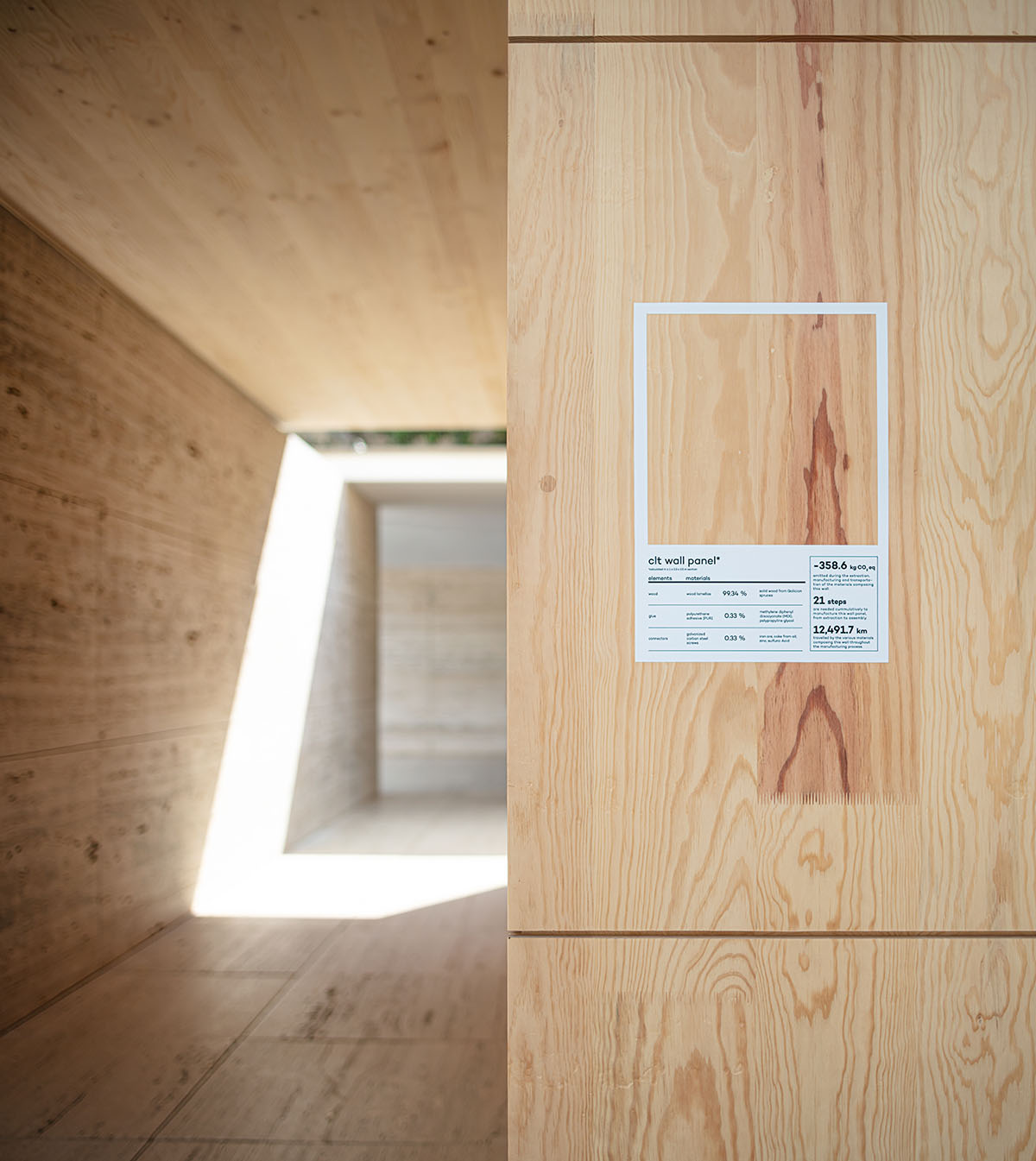 Finally, the exhibition accompanying the space will also review and analyze the different stages of the wood construction cycle through a model-diorama, from the place where the trees used to produce the pavilion are harvested, to the extraction, processing and assembly, through the replanting process that represents the regeneration and sustainable use of the material, approaching the issue from a radically transparent perspective. 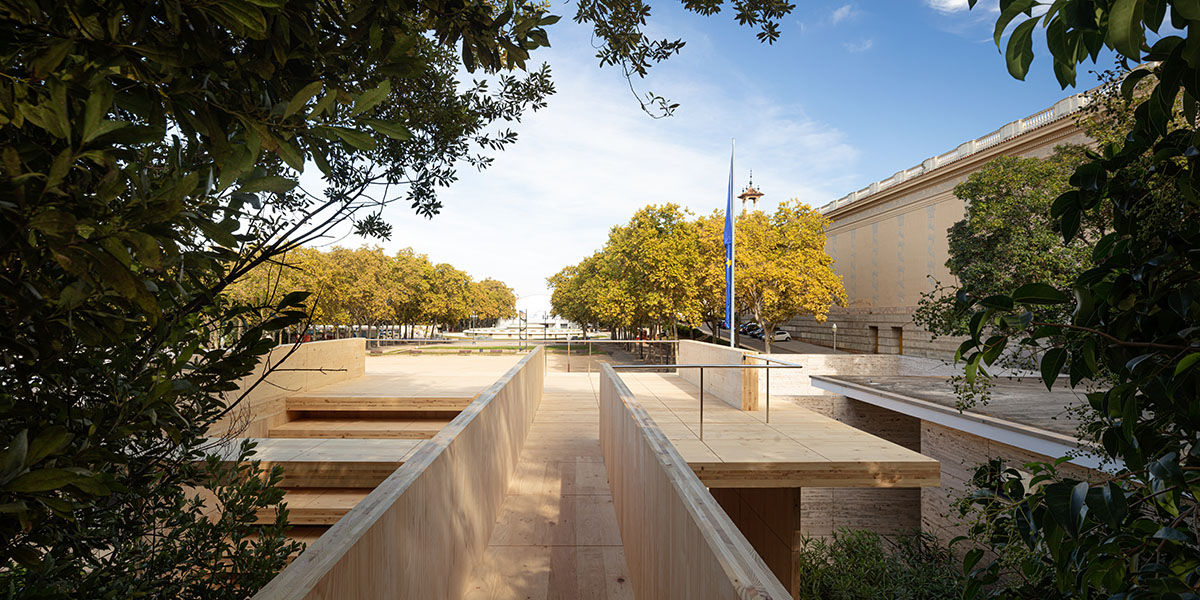 "Given that the future of the earth, its ecosystems and our own civilization will be decided in and by cities, it is necessary to ensure that the materials, means and methods with which we build and manage our cities are mainly extracted from regionally available biological resources," stated in a press release by IAAC and Bauhaus Earth. 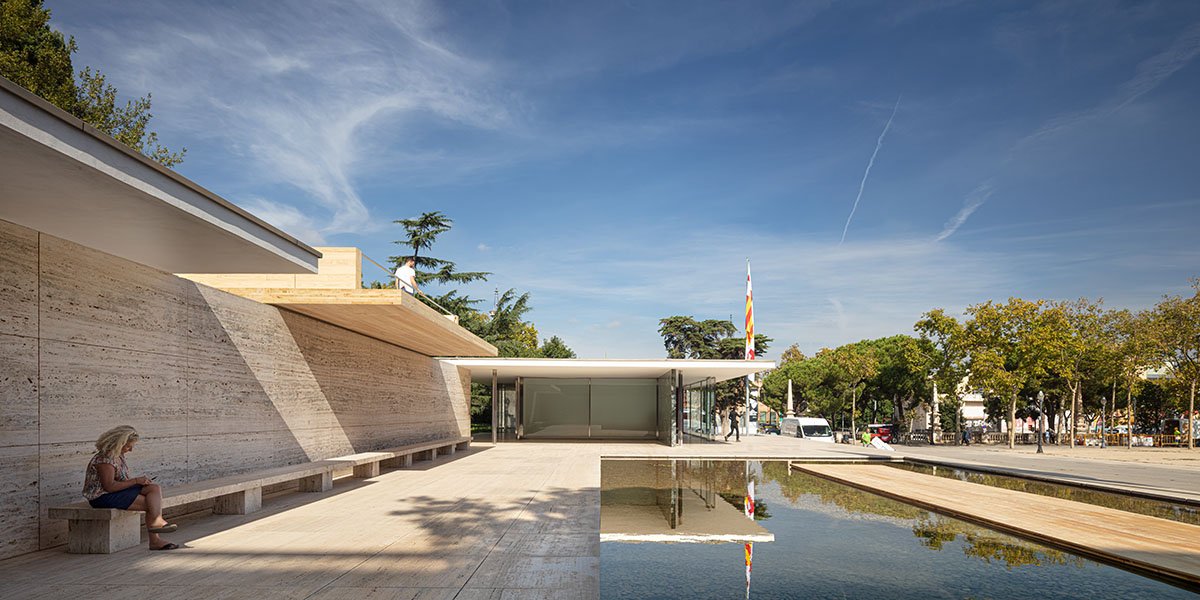 "Only in this way can we transform urban settlements, the origin of climate change, into catalysts for ecosystem healing."

"This idea of a regenerative built environment is outlined in the 2022 Charter for Cities and Earth, launched in Rome. Now is the time to translate this idea into reality," added the organizers. 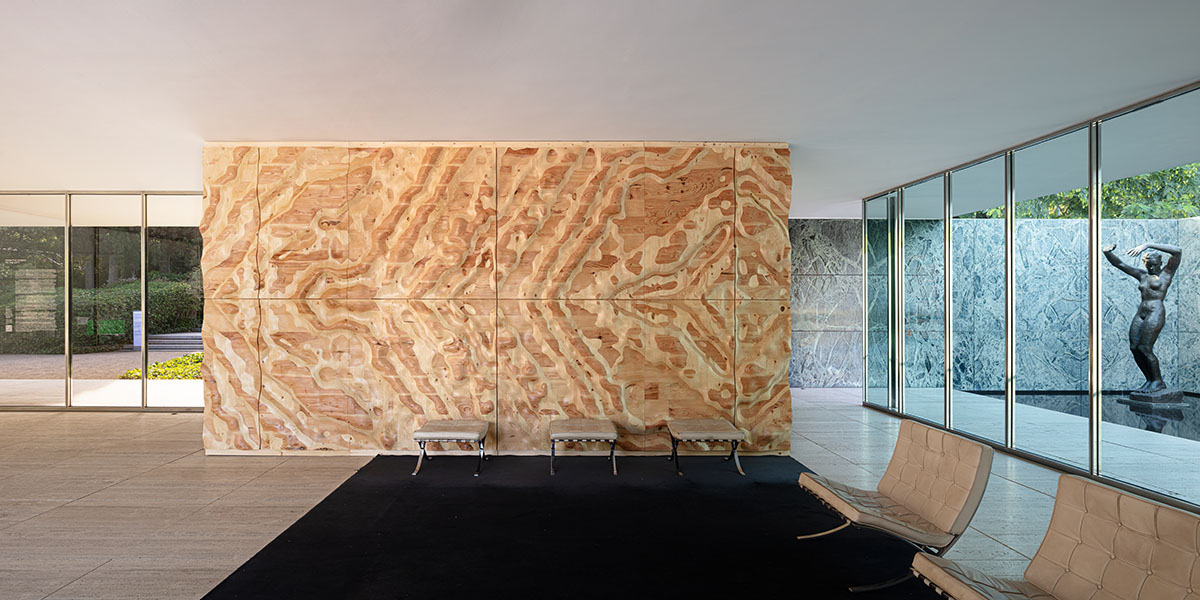 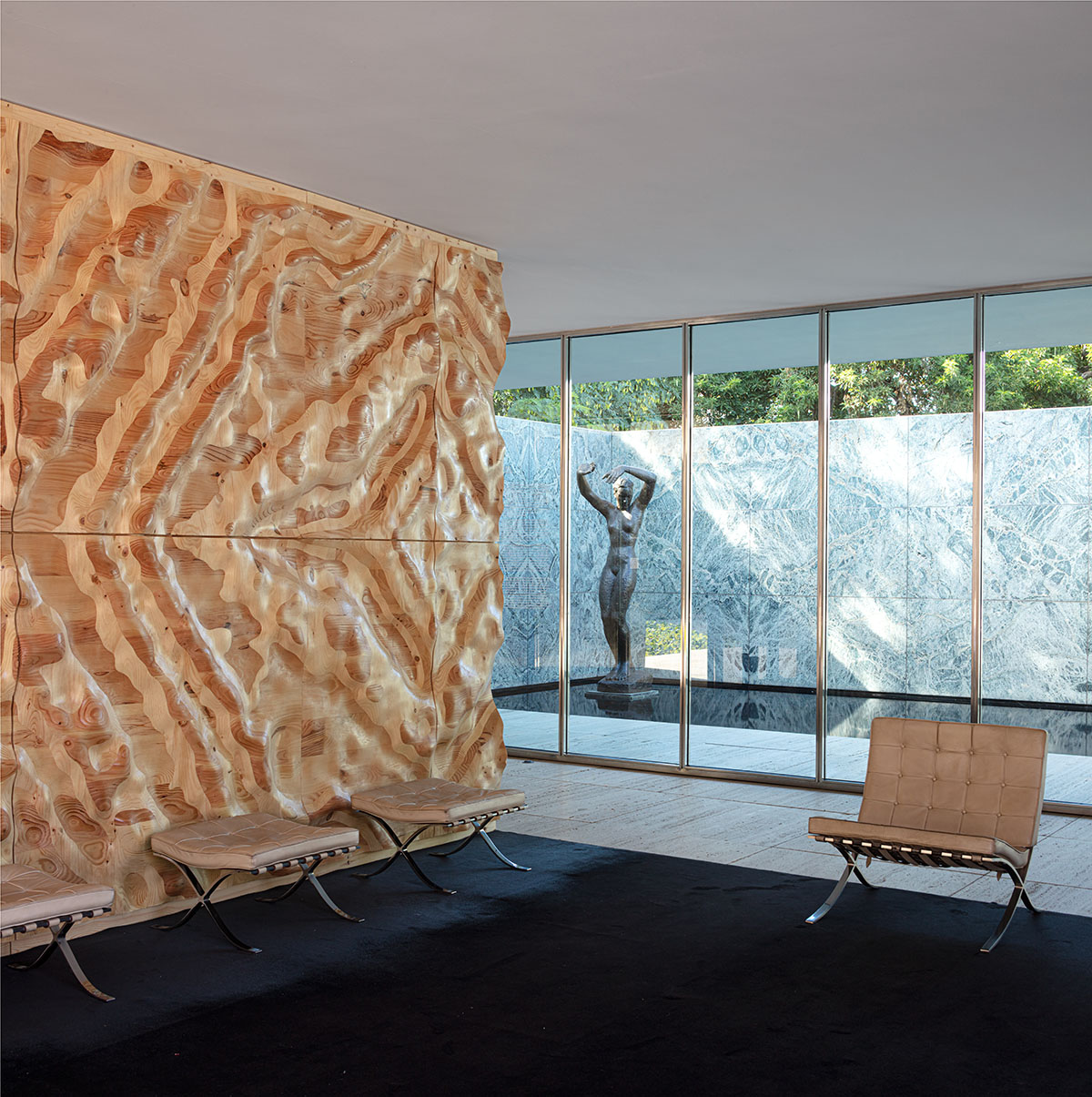 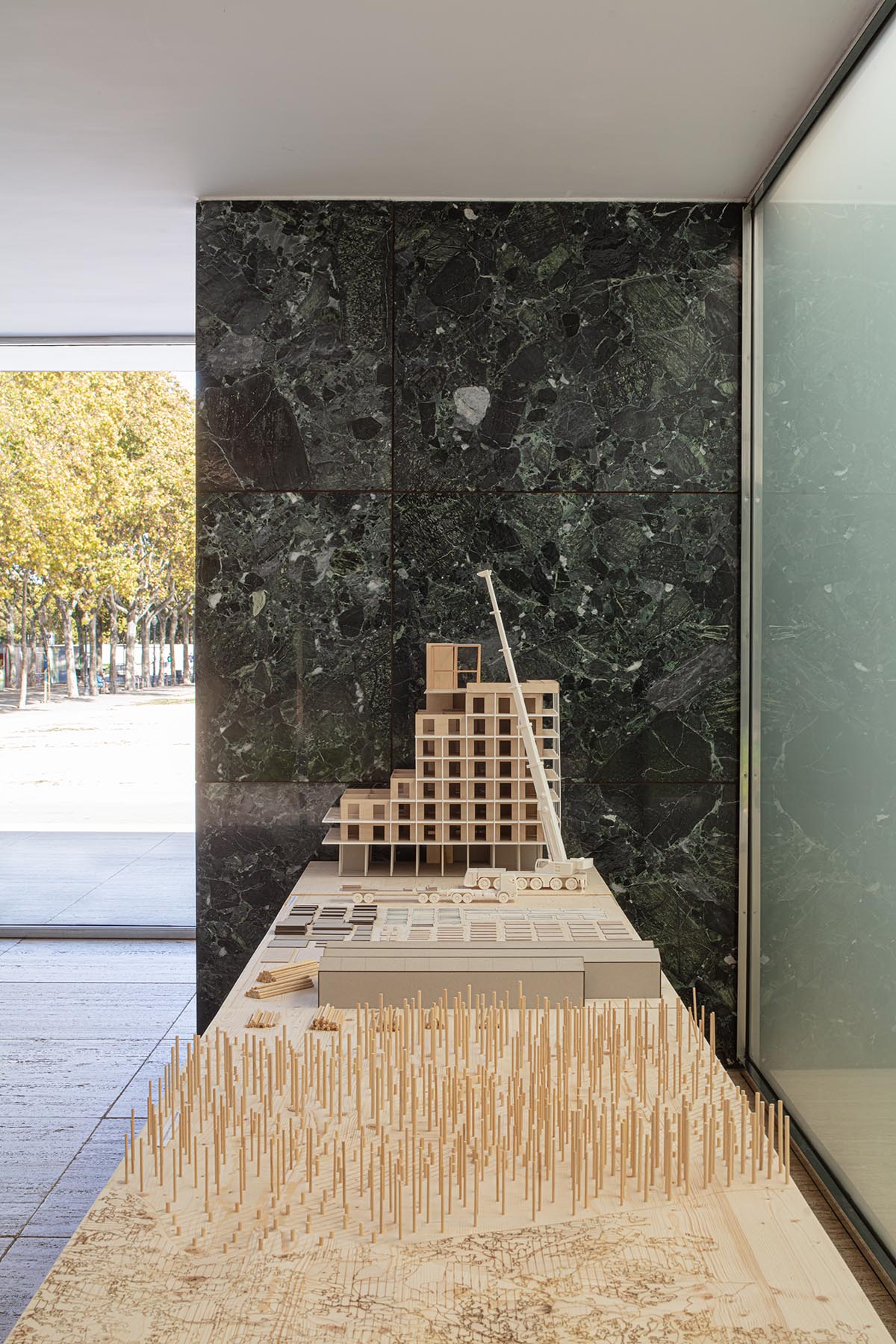 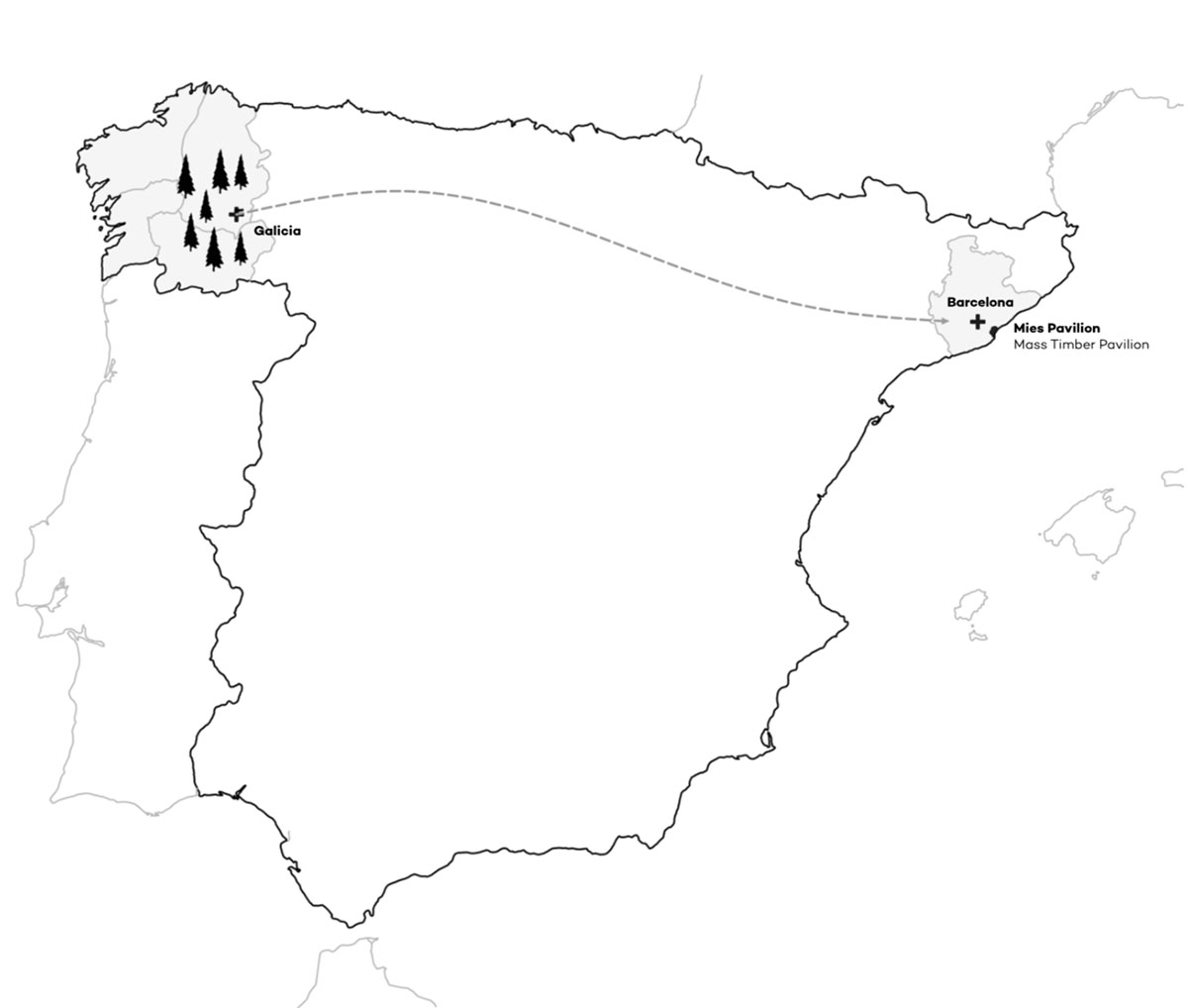 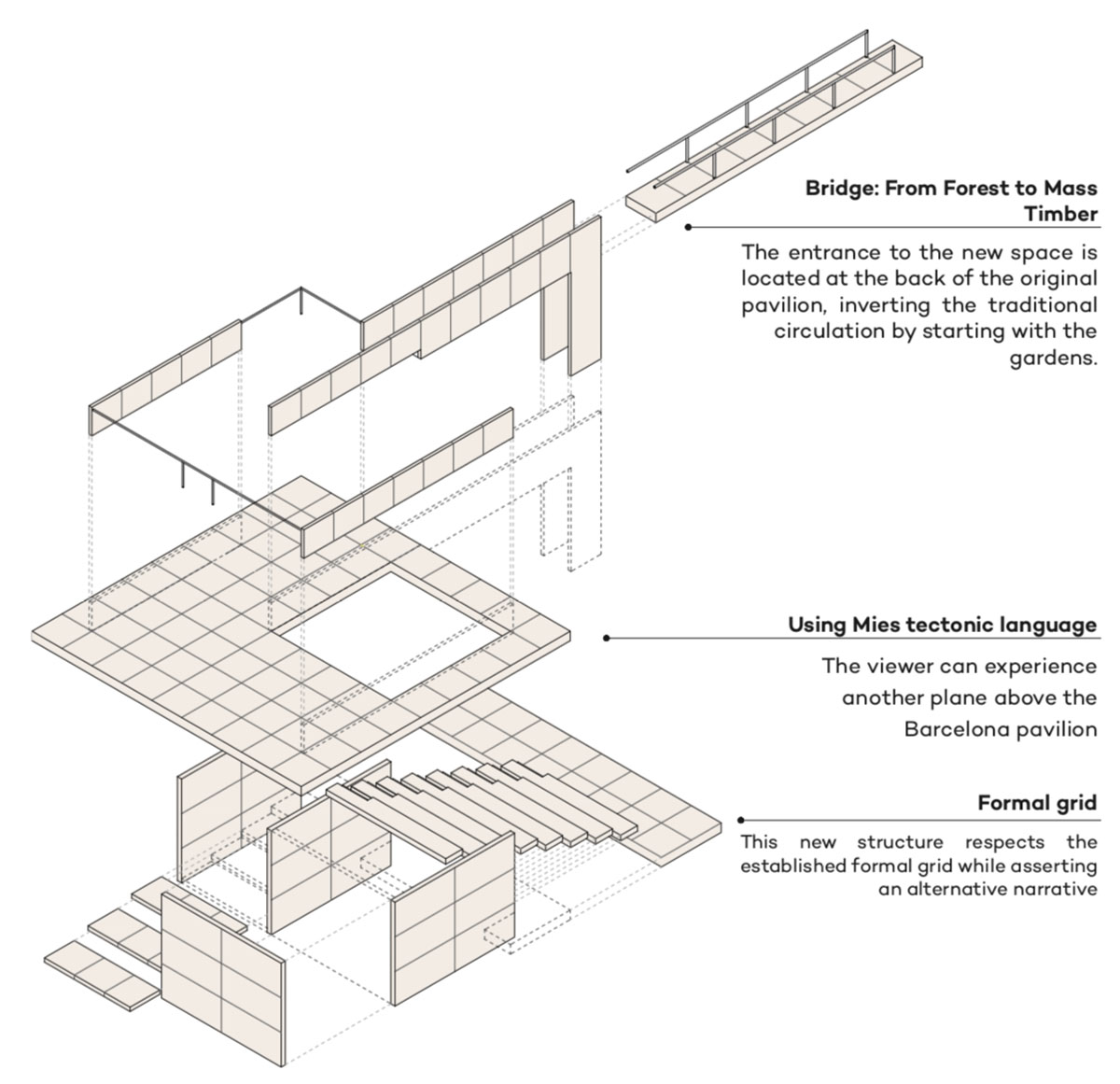 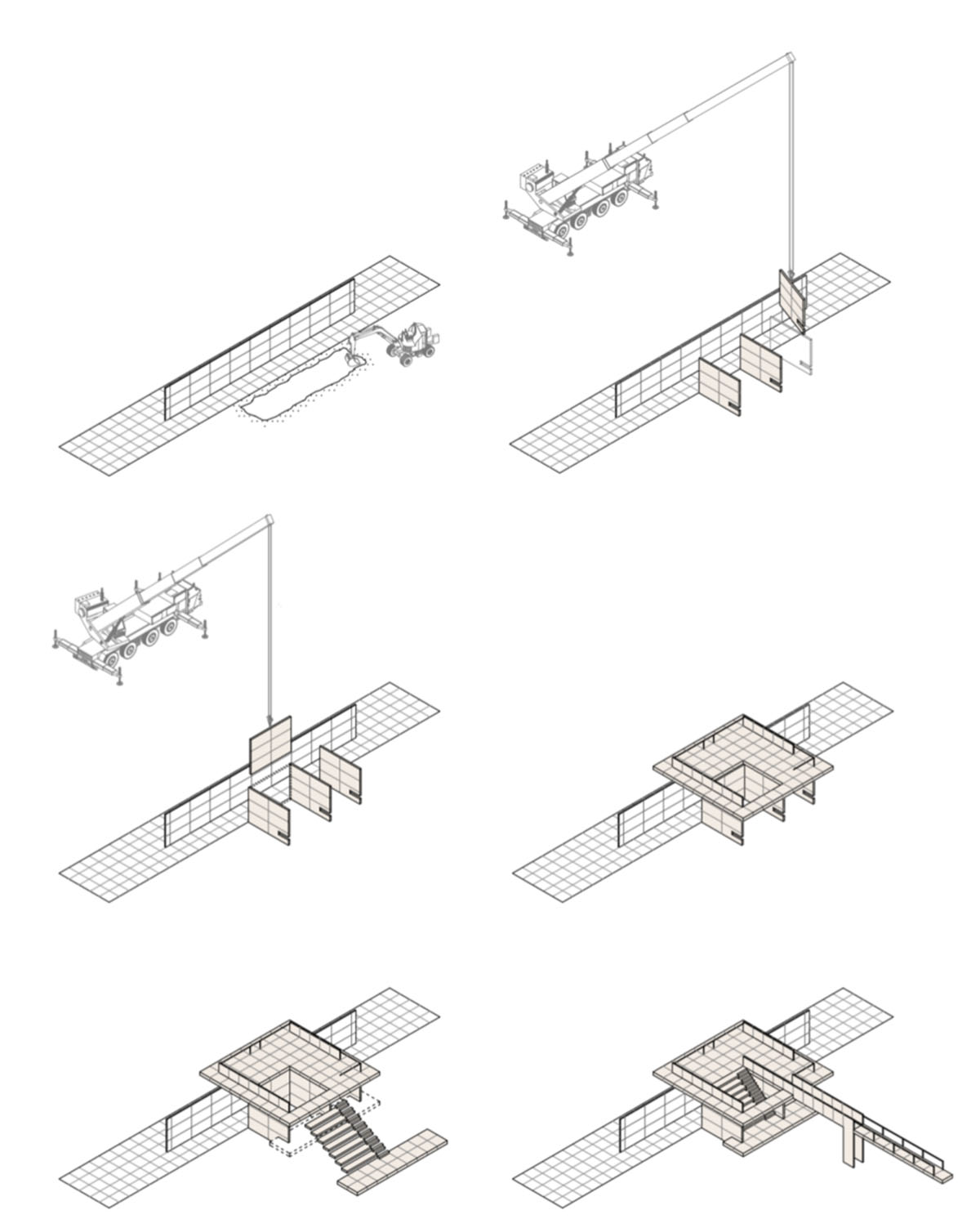 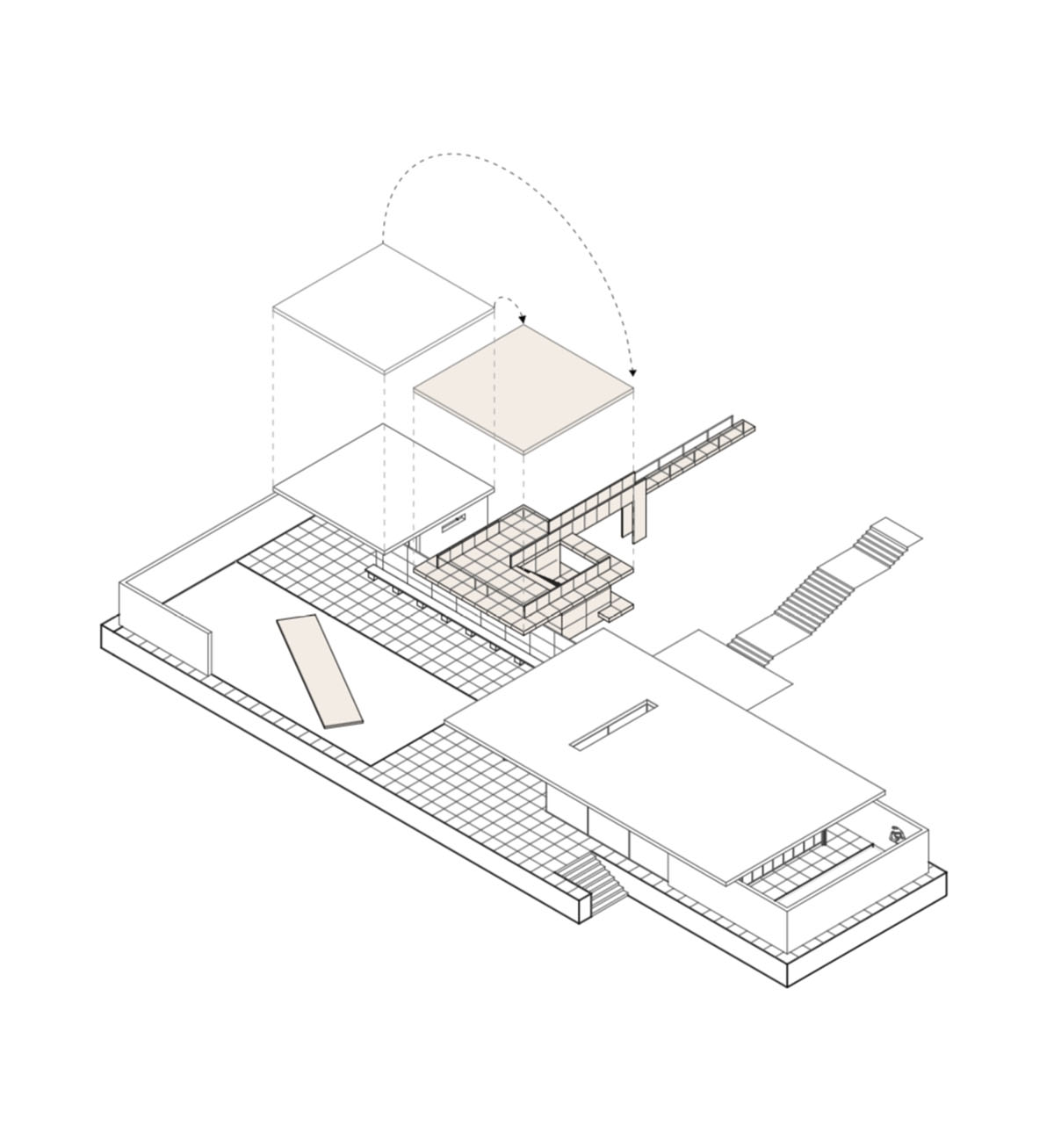 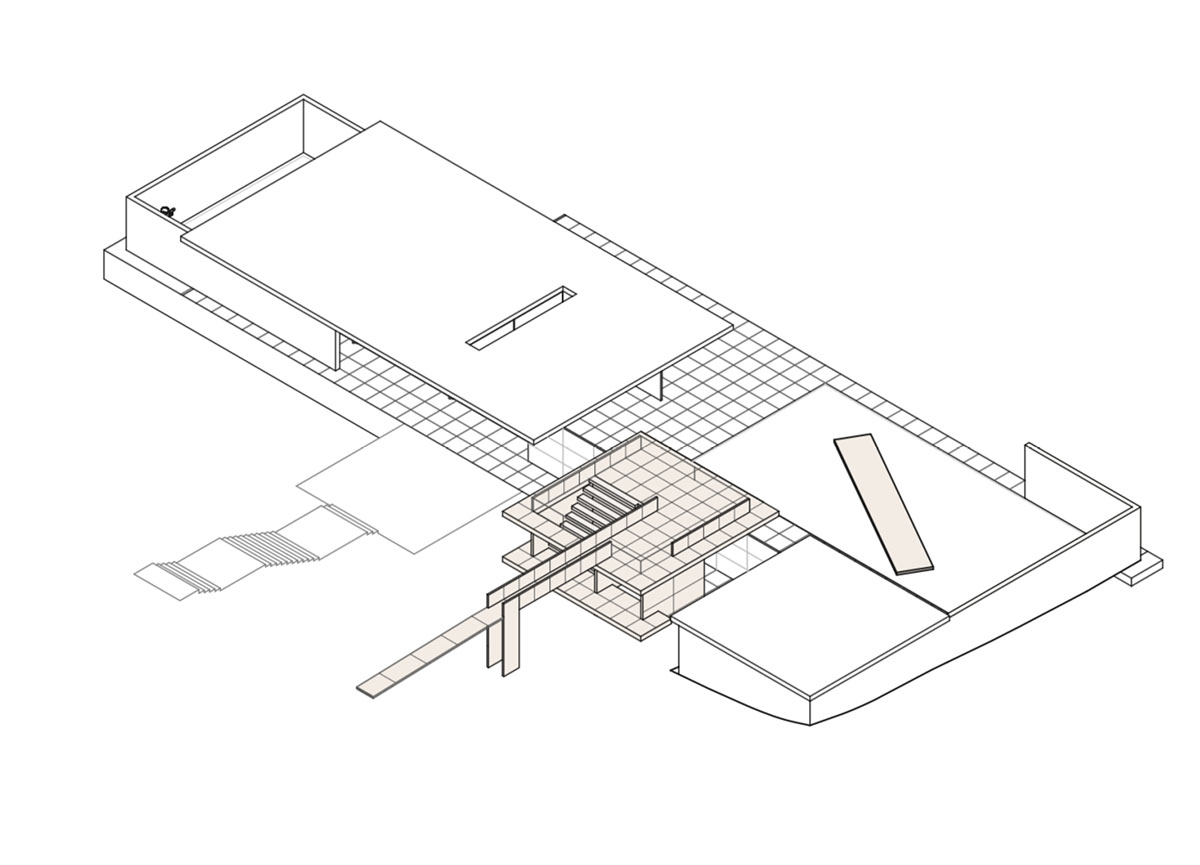 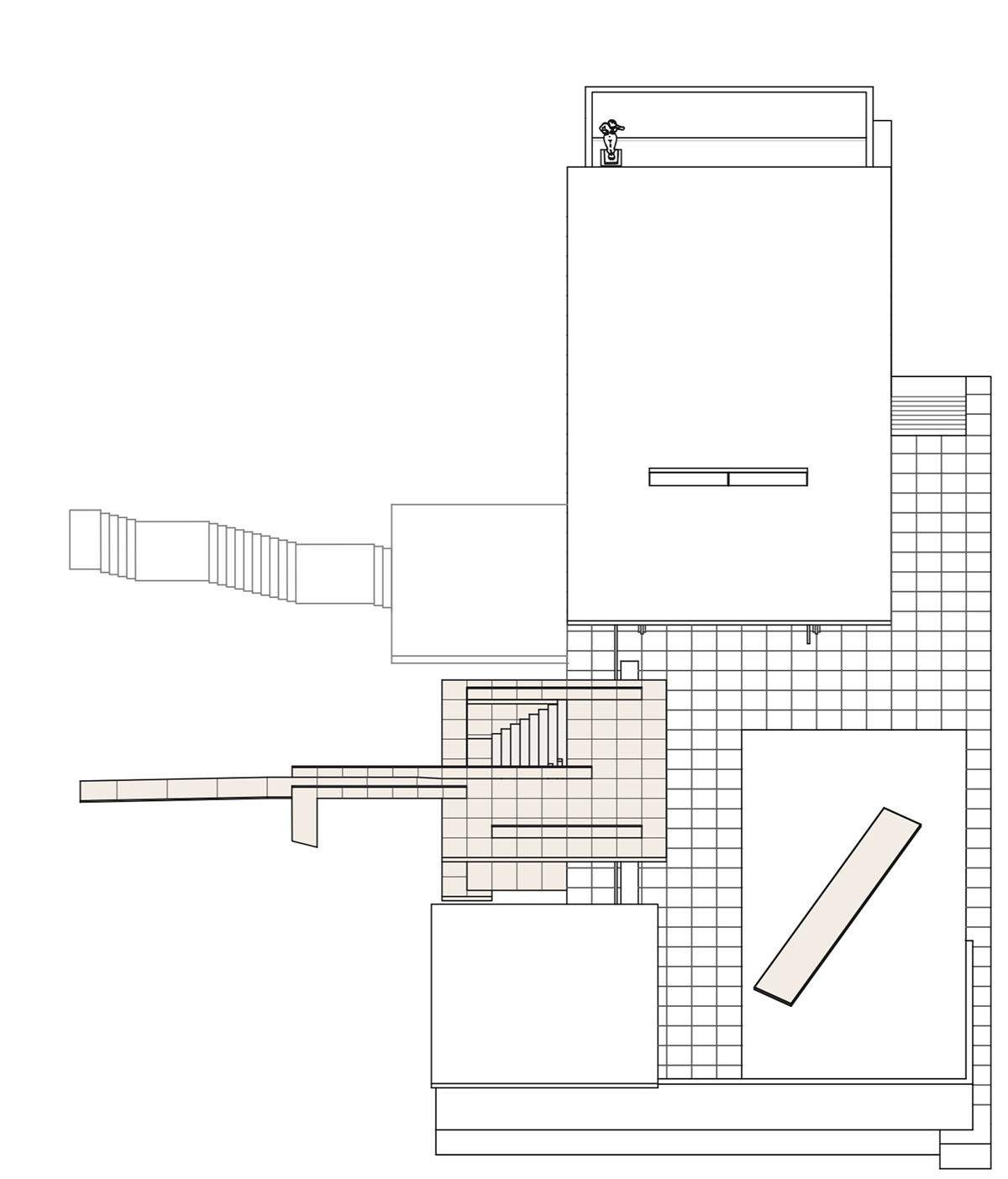