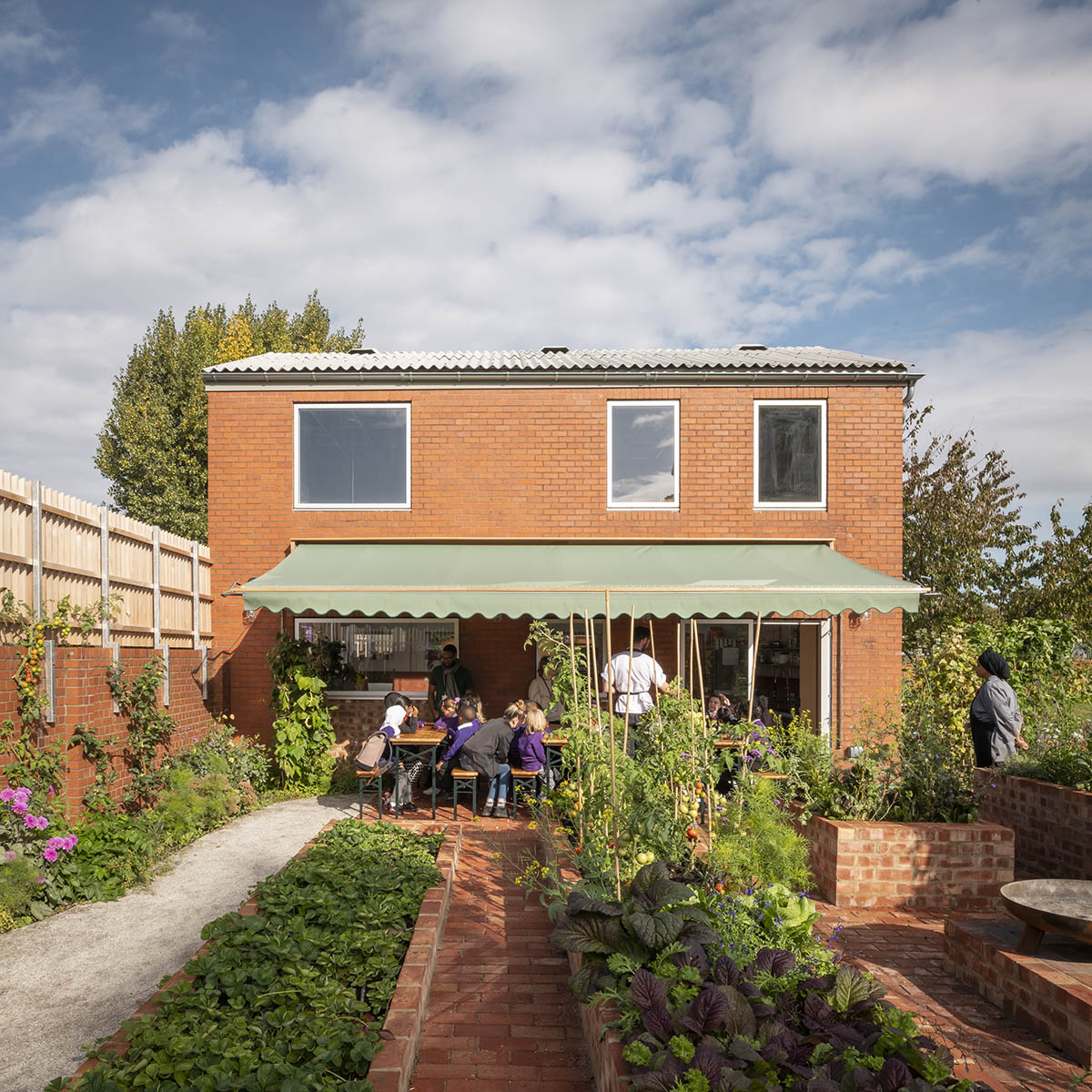 London-based architecture studio Surman Weston has won the 2022 Stephen Lawrence Prize with its project, named The Hackney School of Food, for being a good representation of "limited space and budget", representing a construction budget of less than £1 million.

Presented by the Royal Institute of British Architects (RIBA), the award is an annual prize which was established in 1998 in memory of Stephen Lawrence, a teenager who was on his way to becoming an architect when he was tragically murdered in a racist attack in 1993.

The award is supported and founded by the Marco Goldschmied Foundation, aiming "to encourage new architectural talent, celebrating and rewarding projects with a construction budget of less than £1 million."

Located in Hackney, London, the project was transformed from an old derelict school keeper’s house and garage to provide a unique, inspiring space "to teach children how to grow, cook and eat food, whilst also serving as a crucial community hub."

Maintaining within the constraints of limited space and budget, the studio looked at different ways of retrofitting the existing building to realise the client’s vision.

While keeping the exterior of the building unchanged, the architects transformed the interiors by removing the first floor to create an impressive double-height space.

To create a welcoming oasis outside, the studio overhauled the derelict gardens to provide vegetable patches, greenhouses and outdoor cooking and eating spaces, aiming to teach children all about food. 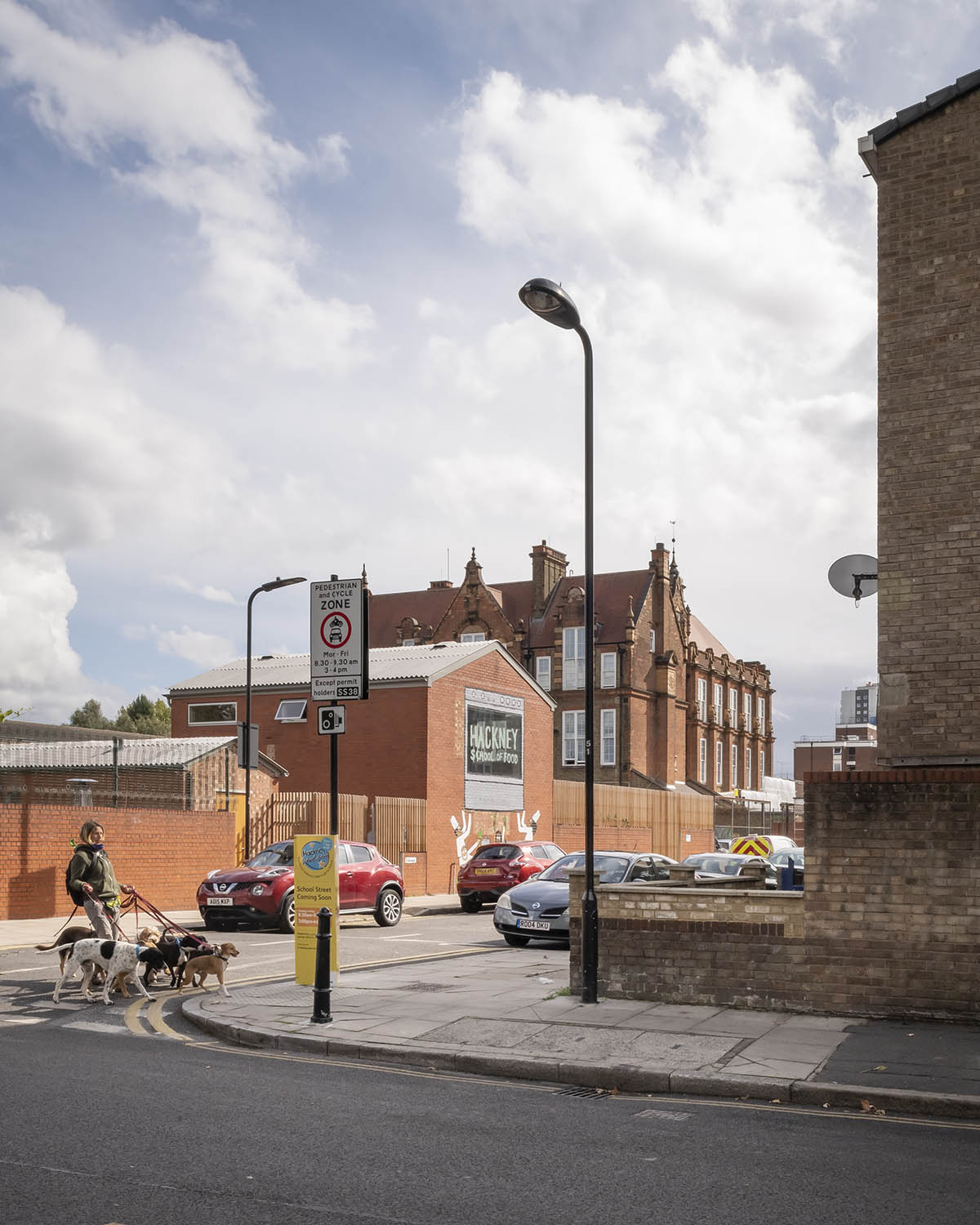 "The success of the Hackney School of Food is not limited to this one site," said Matthew Goldschmied, Chair of the Jury.

"The architect and client have developed an inspirational blueprint to teach others how to regenerate and enliven their own communities in a similar way."

"This bold and inventive investment exemplifies the power of architecture to transform not only the building it touches, but the community it serves," Goldschmied added.

In the exterior of the building, Surman Weston used brick, timber, cement board and zinc rainwater goods as the materials in the building and landscape. 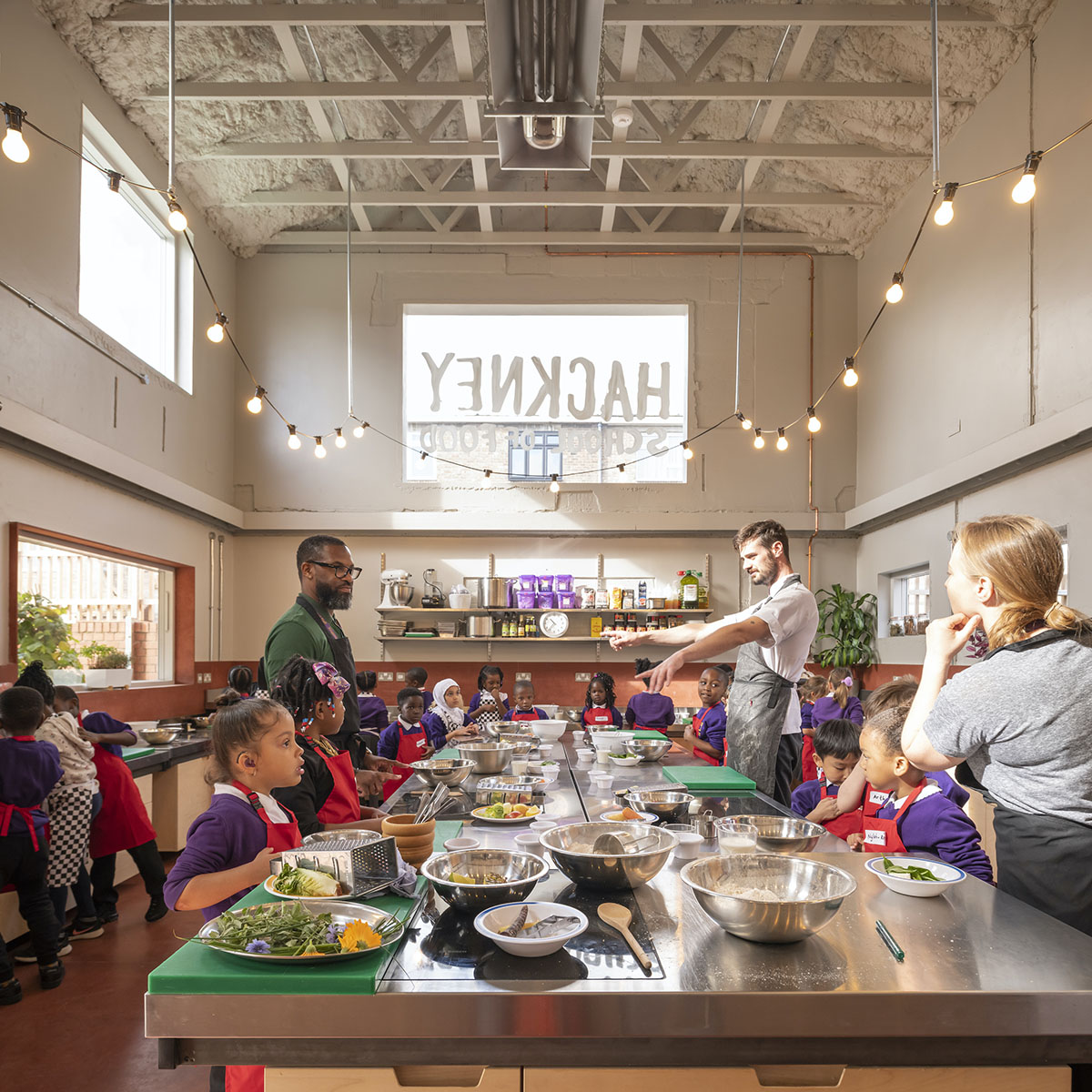 The studio also replaced the harsh weld mesh fencing previously atop the existing boundary wall with a more inviting and softer open timber fence. The building features a large high-level window overlooking the street gable, which not only allows north light in but advertises the school’s presence.

A blank-street façade of the building is animated with murals designed by illustrator Jean Jullien. All building interventions, such as the paving, planters and pizza oven, complement "the same unifying brick, distinct in every way from the small, engineering brick of the 1980s," stated in a jury report.

Inside, the studio removed all partitions from floor to ceiling, creating "a cathedral of food", called as a ‘cauliflower ceiling’, which is in fact unfettered spray foam and thankfully fire-treated.

The architects left exposed old finishes and scars on walls to evoke the building’s former use. 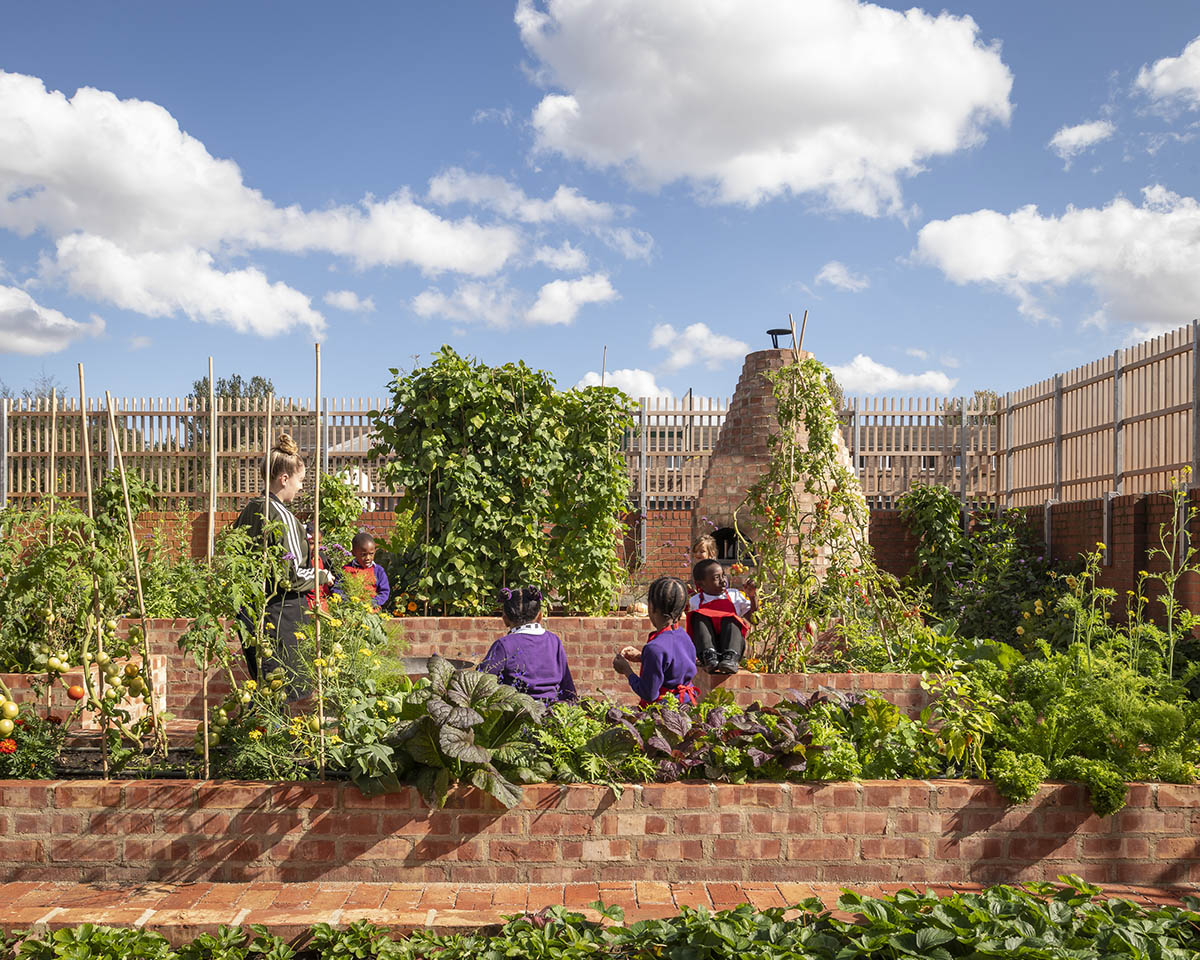 The team used timber cement board across floors, lower walls and window surrounds to form "a robust and hygienic finish" that holds the space together. Flexibility and safety are provided by adjustable worktops and flush hobs.

"Everywhere one looks, the details are considered, thoughtfully designed and set out in a natural, unselfconscious way," stated the jury report.

"This is design to support utility rather than design for design’s sake and creates many moments of delight. It has turned the ordinary into the extraordinary with the budget largely spent up to child height."

"The architecture allows for a praiseworthy amount of community outreach. The jury couldn’t fault the intention and apparent impact. The architects’ subsequent extended brief to create a toolkit for application on other unused buildings across the borough evidences this," stated in the jury report.

According to the jury, "the project is accessible, safe, biodiverse, rich in social nourishment and worthy of a visit if you are in the area - if for nothing else, some chicken-hugging wellness." 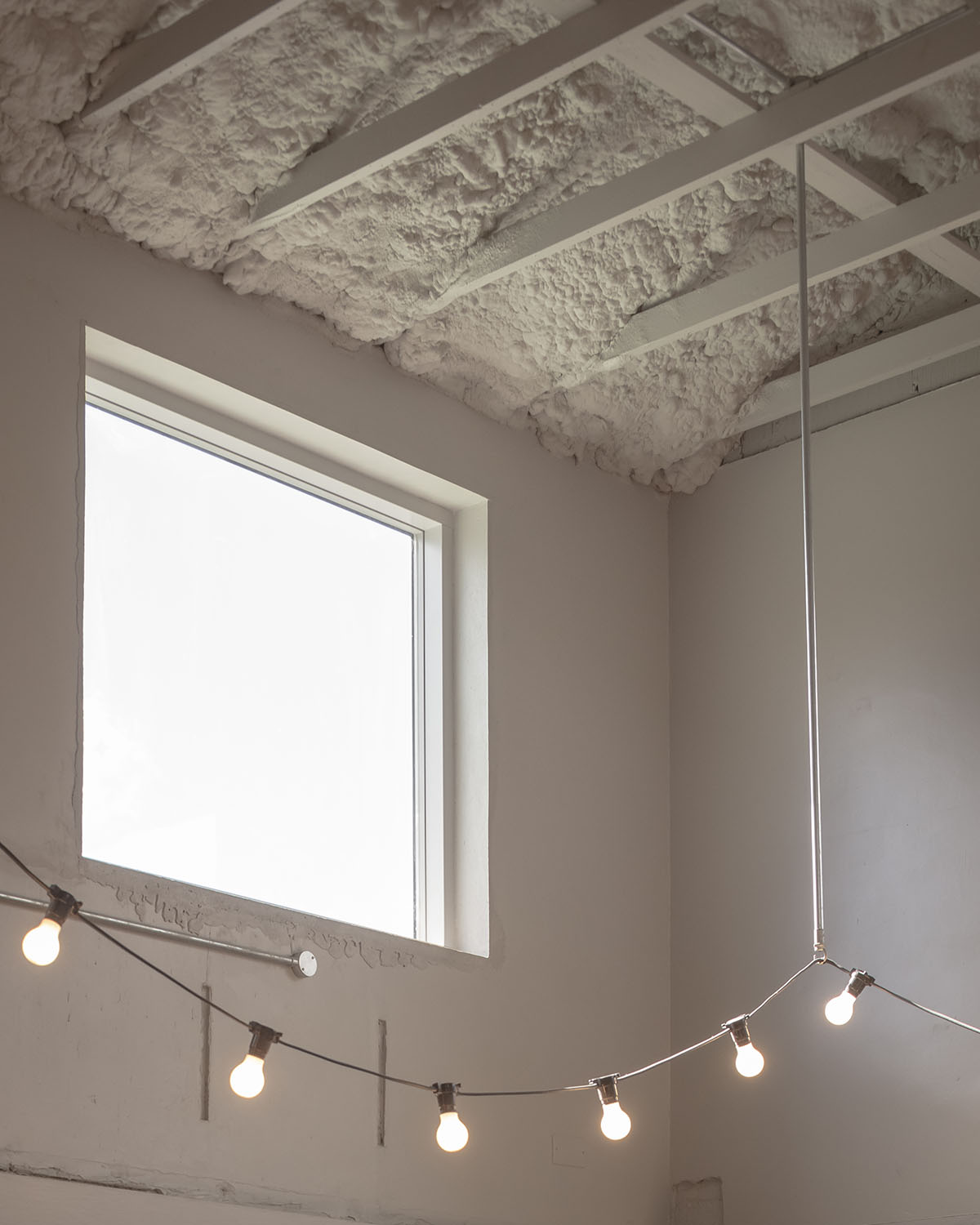