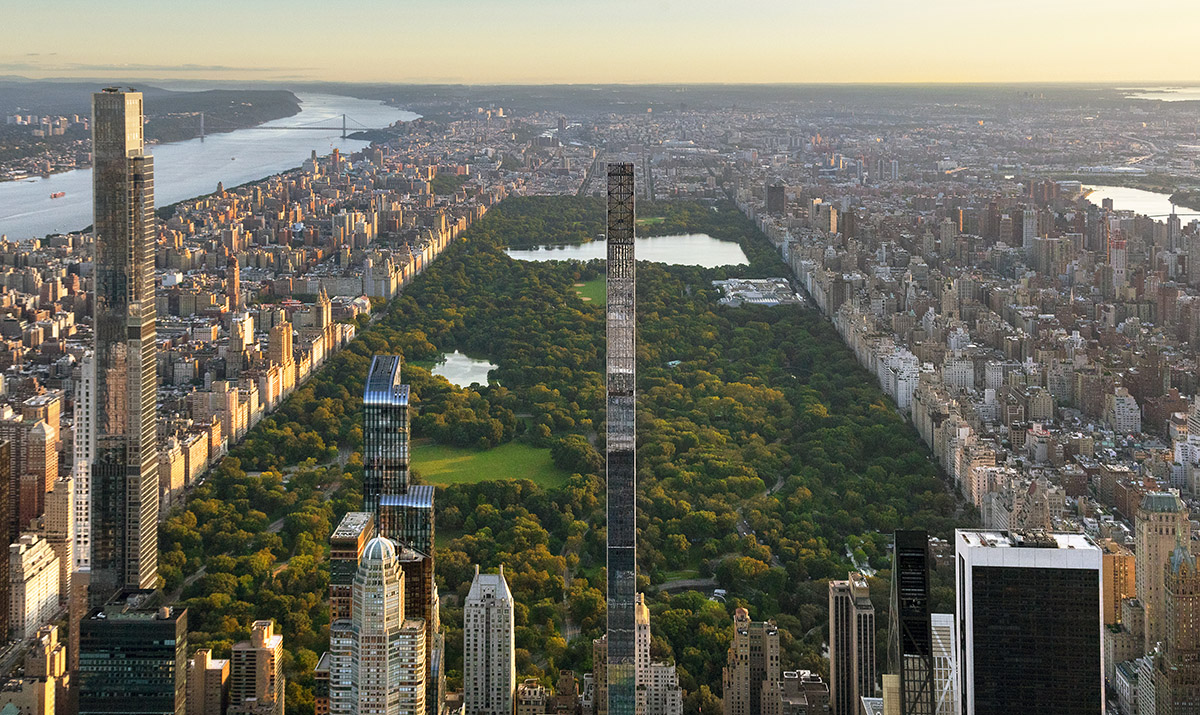 New York-based architecture practice SHoP Architects has completed its new skinny skyscraper in New York City, which is dubbed as the world's skinniest skyscraper and the second tallest residential building in the Western Hemisphere.

Named 111 West 57th Street, the 1,428-feet (435-metre) skyscraper, which was completed last week, started to accept its residents to move in.

Developed by JDS Development Group, Property Markets Group and Spruce Capital Partners, the 111 West 57th Street is comprised of two structures: the original landmarked Steinway Hall, an advent building which is home to Steinway & Sons piano company which was designed in 1925 by Warren and Wetmore who designed Grand Central.

The interior spaces of the tower were designed by New York-based design firm Studio Sofield. 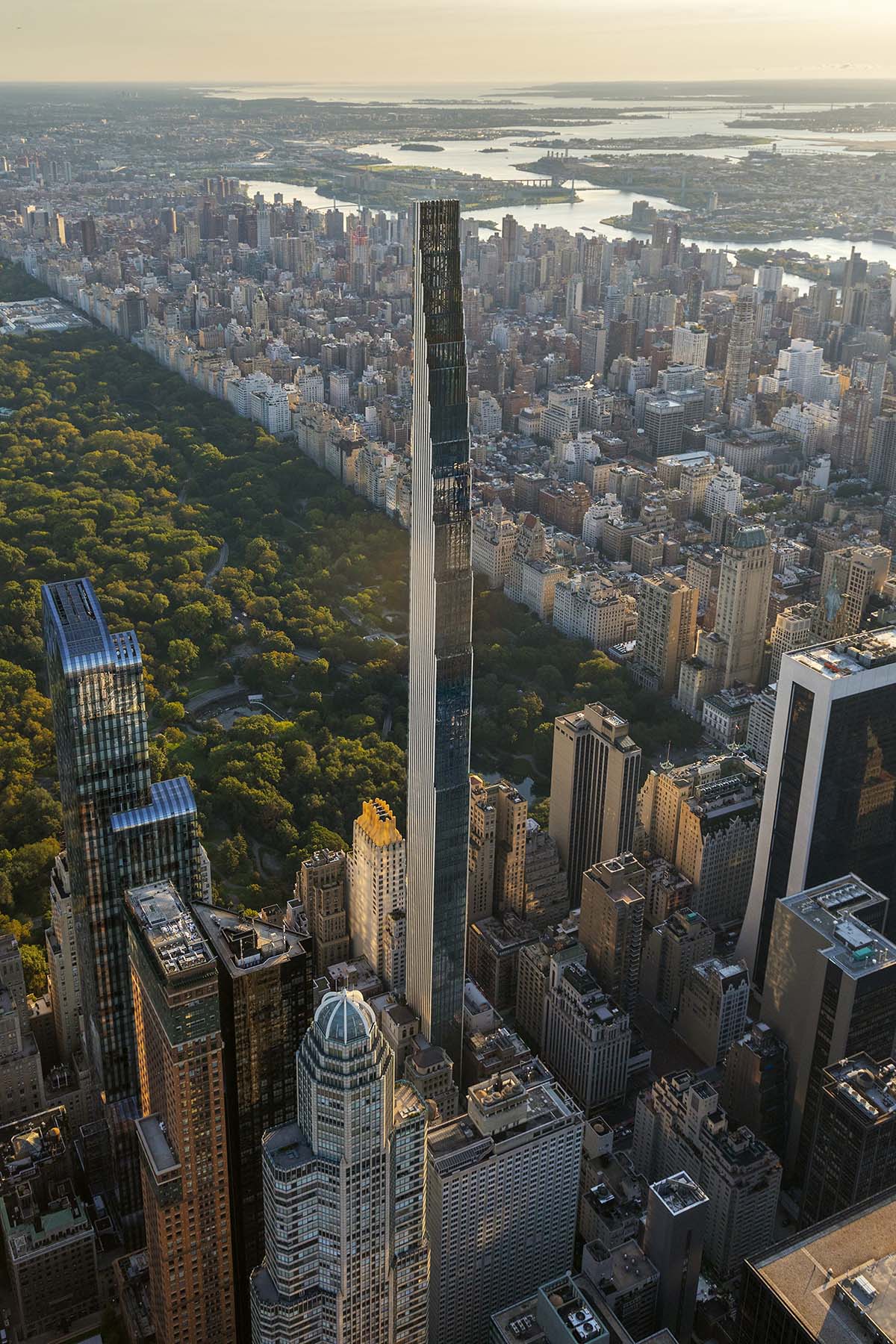 While 11 West 57th Street has a total of 60 residences, another 14 residences are designed in the adjacent landmarked Steinway Hall building and 46 full-floor and duplex residences within the Tower.

The skyscraper features 300-foot (91.44-meters) decorative steel crown, and pays homage to the most iconic and celebrated skyscrapers of Manhattan’s pre-war Golden Age.

With its skinny exterior form, which is almost seamless, SHoP Architects adds the bold yet graceful residential tower that soars perfectly centered over Central Park in Midtown Manhattan.

Construction began on SHoP Architects' 111 West 57th Street in 2019, the tower topped out in the same year. The skyscraper was completed in 2021. The 91-story tower get the crown of the skinniest skyscraper title in the world with a width-to-height ratio of about 1:24.

The tower's design accentuates its setbacks along 57th Street with a series of elegant, feathered steps that delicately taper the south façade as it reaches skyward. 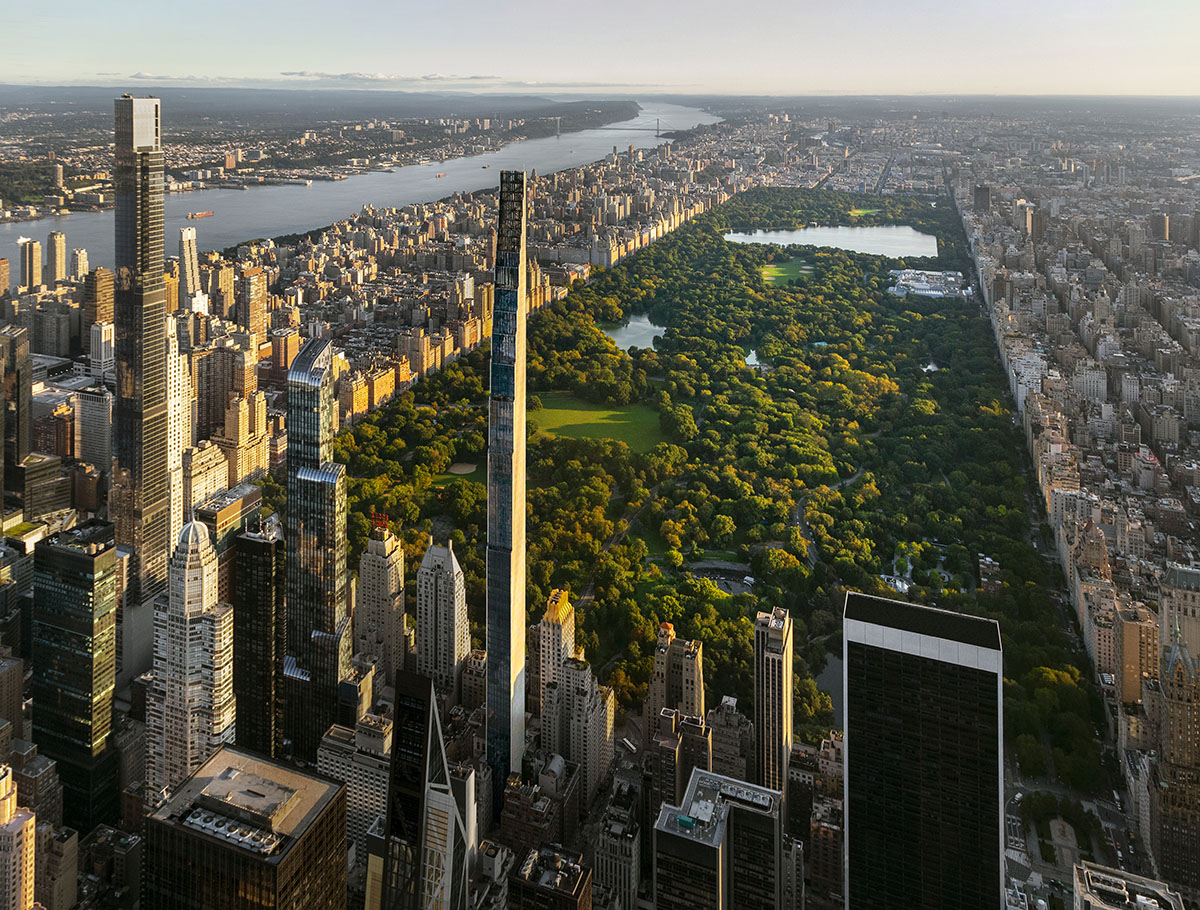 According to SHoP, each step corresponds with a layer of terra-cotta pilasters cladding the east and west facades. The studio creates an intricate façade that is designed to be viewed from multiple scales and vantage points.

The skyscraper's east and west façades are clad in terra-cotta panels with 22 different sets of contours, which create a sweeping play of shadow and light from the city scale. On the other hand, their glazed finish creates a contrast with decorative bronze filigree to provide extraordinary richness from up close. 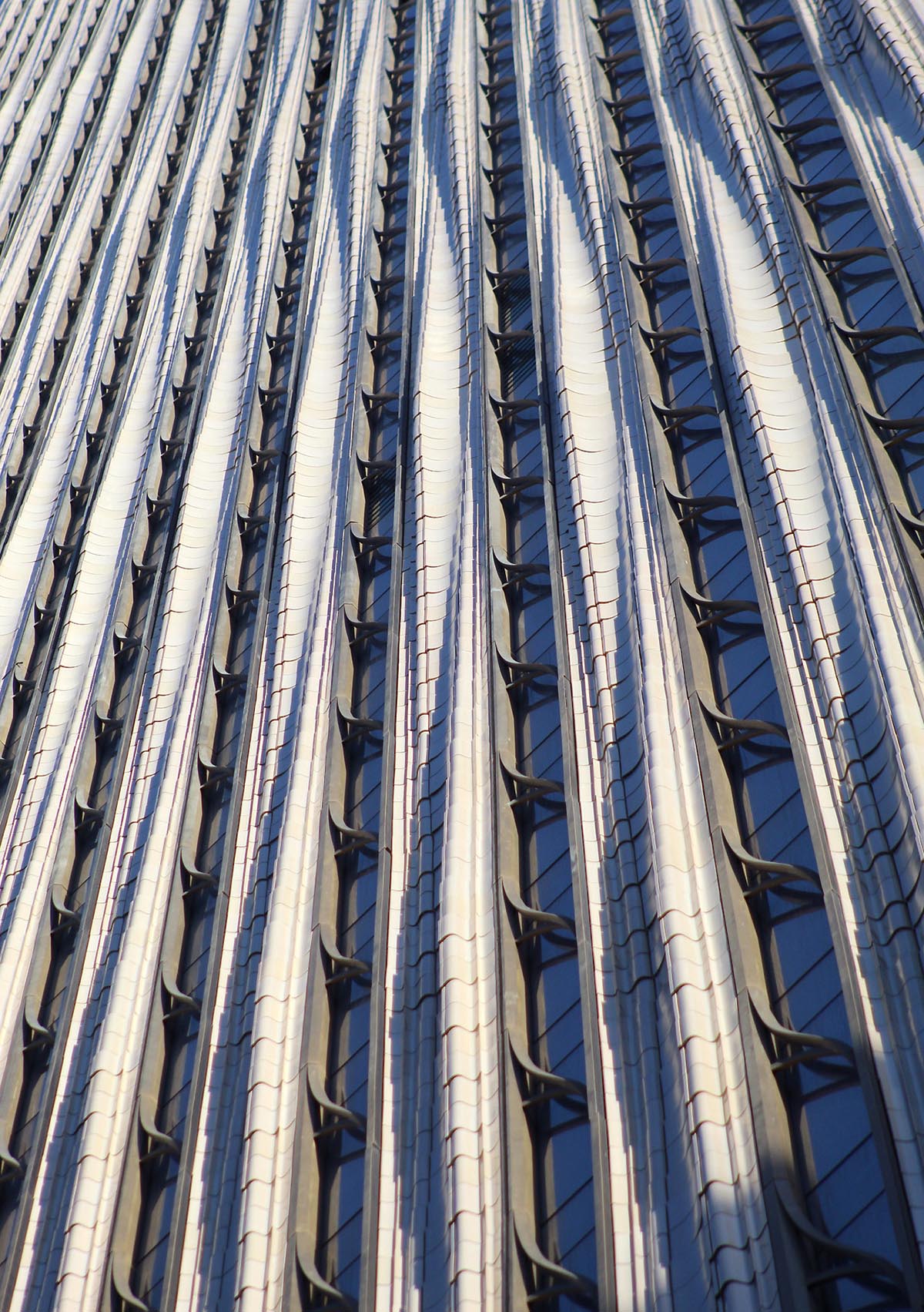 Each floor accommodates only one residence, the design of each of the tower’s 46 full-floor and duplex residences maximizes the astounding park and skyline views.

"The tower embraces the quality, history, and craftsmanship behind New York’s classic skyscrapers while taking advantage of the latest in engineering technology," said SHoP Architects.

Leading engineering company WSP served as the structural engineer on the project. The tower was built with the highest strength concrete in the world at 14,000 psi, paired with over 5.5 million feet of rebar.

"An efficient structural core provides the broadest floorplates possible, with over 14 feet in ceiling height," added the office.

"A large mechanical penthouse houses an 800-ton tuned mass damper to minimize the movement and vibrations of the tower, atop which rests a majestic and awe-inspiring crown that is clad in terra-cotta and bronze," SHoP Architects continued. 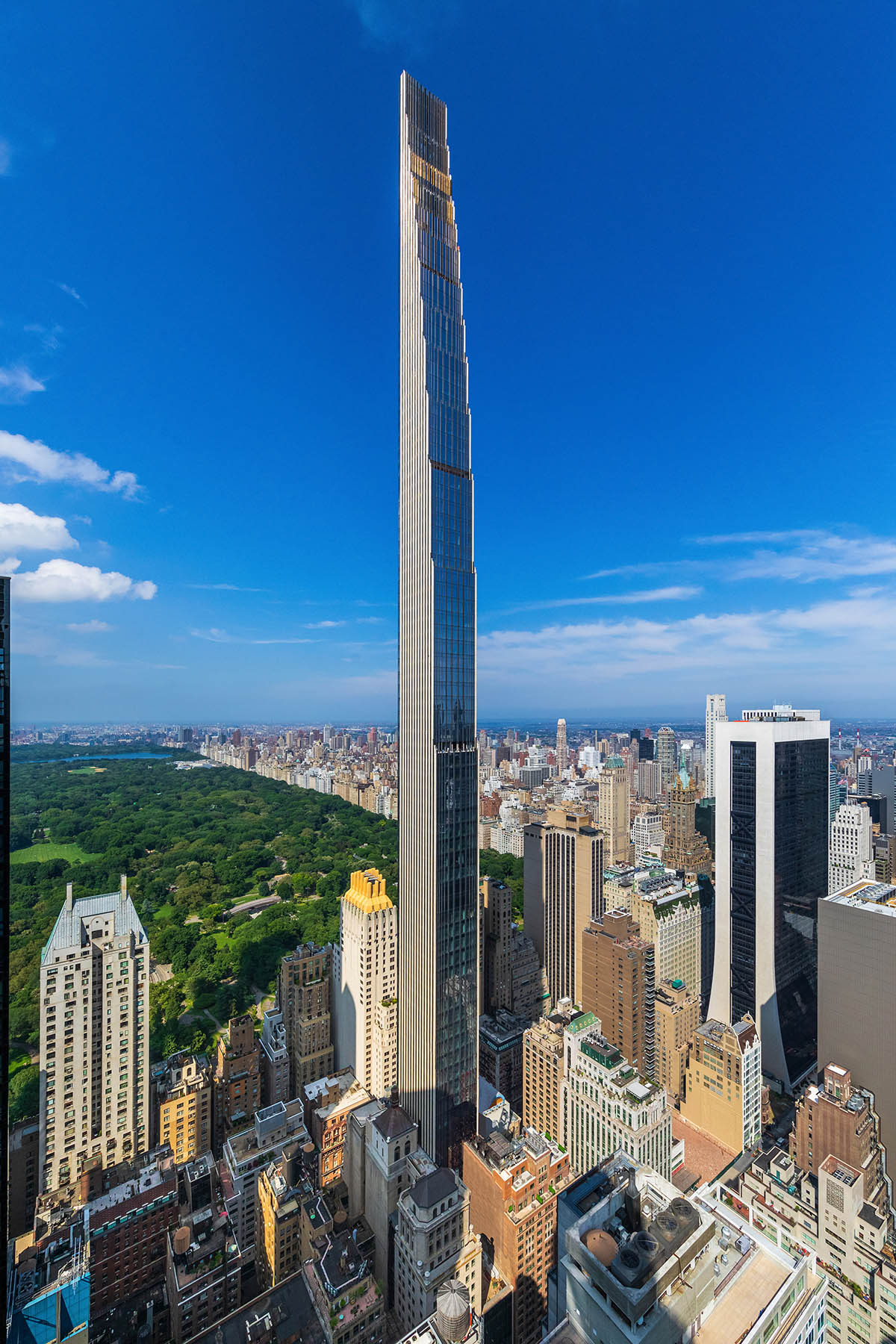 The tower rises adjacent to the historic Steinway Hall, originally designed by Warren & Wetmore, the famed architects behind New York landmarks such as Grand Central Station.

The façade and historic rotunda were restored in collaboration with the Landmarks Preservation Commission of New York. Residents at 111 West 57th Street will also have access to an array of amenities and services, including an 82-foot (25-metre) two-lane swimming pool with private cabanas, a separate sauna, steam and treatment rooms, a double-height fitness center with a mezzanine terrace, a private dining room and a chef’s catering kitchen, a residents’ lounge with an expansive terrace, meeting rooms and a study, 24-hour attended entrances and a dedicated concierge service.

SHoP Architects' another skyscraper, The Brooklyn Tower, is under construction in Brooklyn, New York. Once complete, it will be Brooklyn's first supertall skyscraper.

Rustic Canyon designed by Walker Workshop features light-filled and creamy interiors in Los Angeles
May 13, 2022 • 1253
Kengo Kuma and Associates designs commercial building covered by plants in downtown San Jose
May 09, 2022 • 1048
World Architecture Festival and World Festival Of Interiors open for entries for Its 2022 edition
May 09, 2022 • 1038
Morphosis' University of Texas, a new arts campus breaks ground at Dallas
May 12, 2022 • 1018
Field Conforming Studio installs steel sculpture with nine hollow columns in Tangshan
May 11, 2022 • 791
JKMM Architects transforms former buildings into a new building for University of the Arts Helsinki
May 11, 2022 • 768