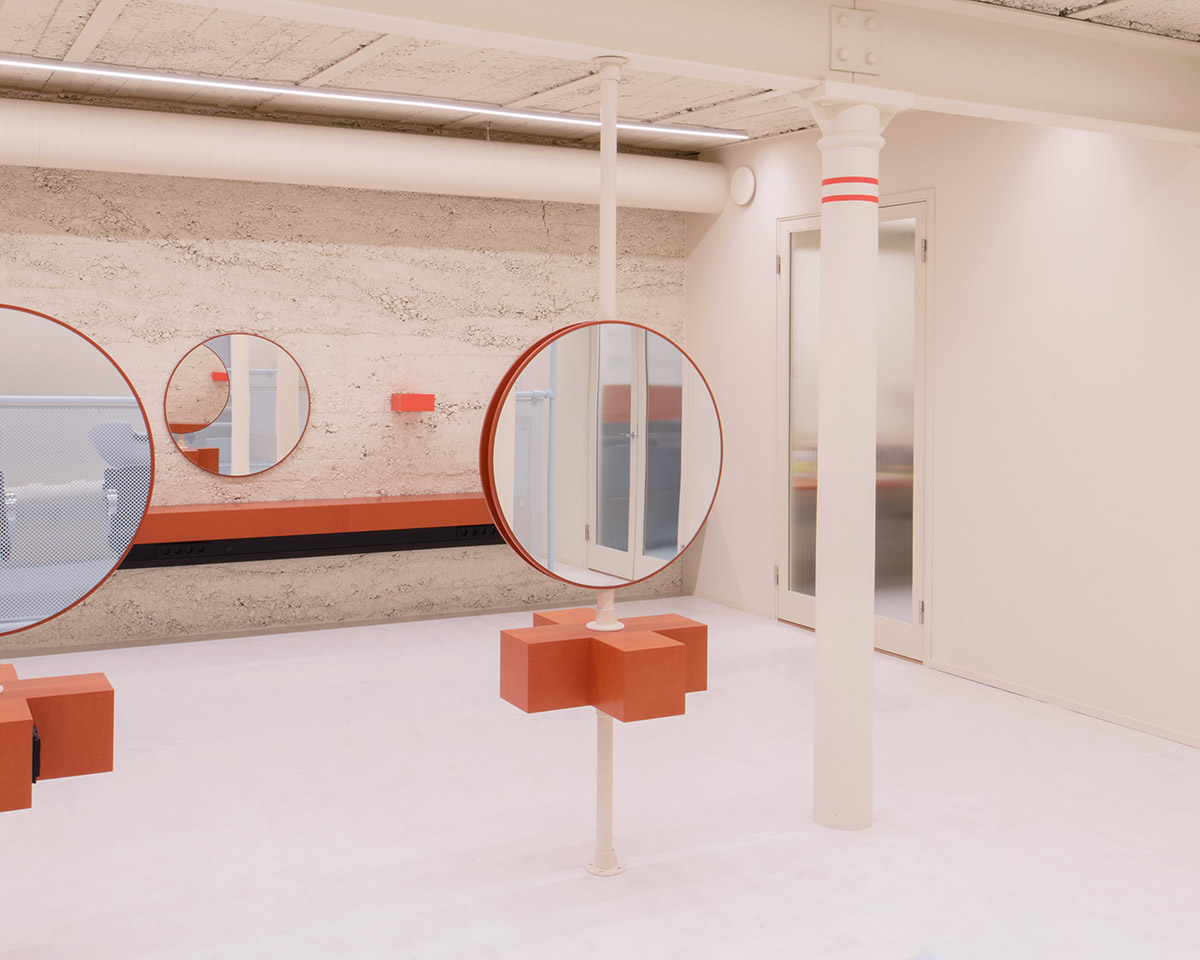 Stockholm-based architectural practice Westblom Krasse Arkitektkontor has added tiny and sculptural cutting stations, made of circular mirrors and red-colored cross-shaped side tables, to the interiors of a hair style salon in Stockholm, Sweden.

Named Little Faktory, the 220-square-metre salon, located at a basement, formerly used as an office space, was converted into a hair style salon.

To turn it into a breathing space, the architects have revealed beautiful concrete walls and an industrial steel structure of the existing building adapting to the building's over hundred- year-old original state. 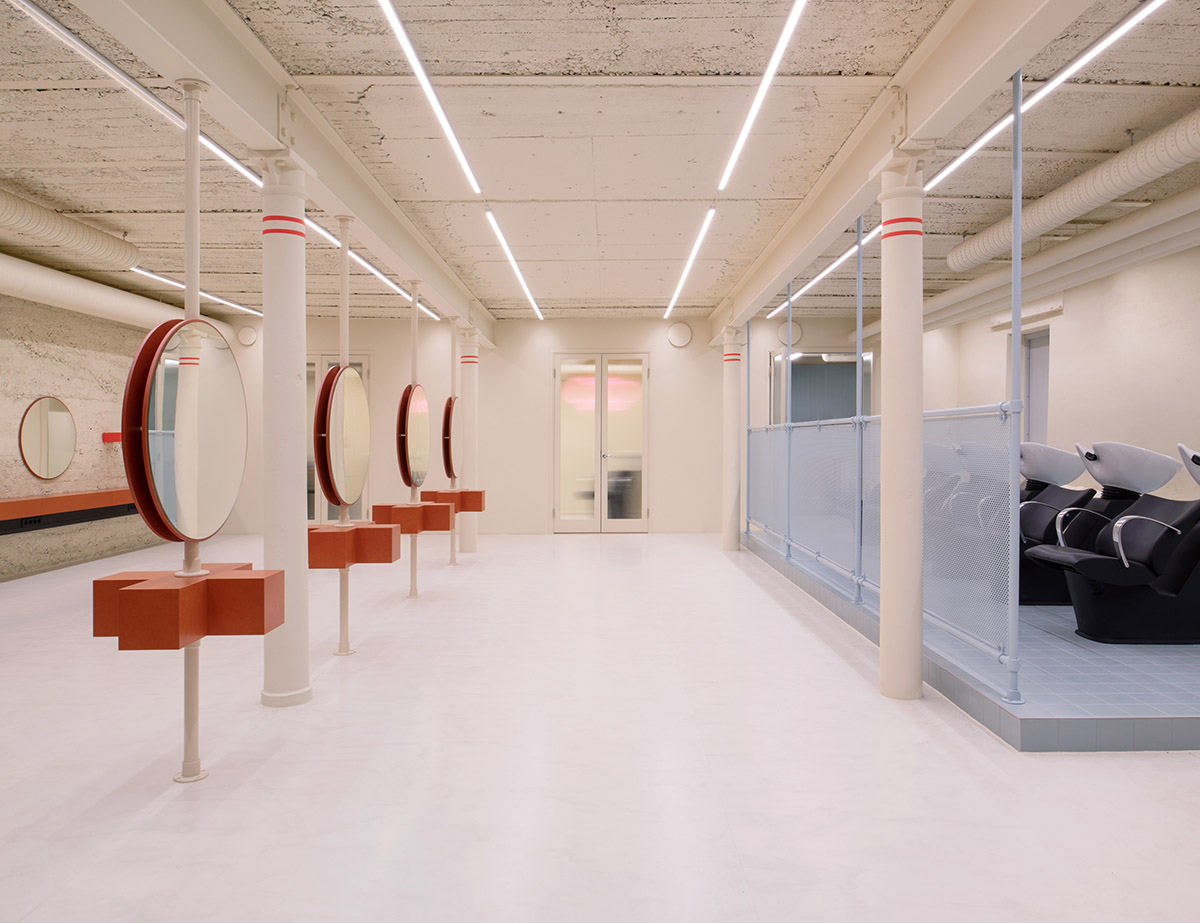 The salon was designed for award-winning colourist and stylist Sofia Geideby whose brand is Little Faktory, a new cutting edge hair, style and colour studio.

The architects wanted to intervene the space as little as possible and added only much-needed pieces that can also look minimal, aesthetic, light-filled and non-intrusive.

The team created an open space and stage for the salon's creative activities. 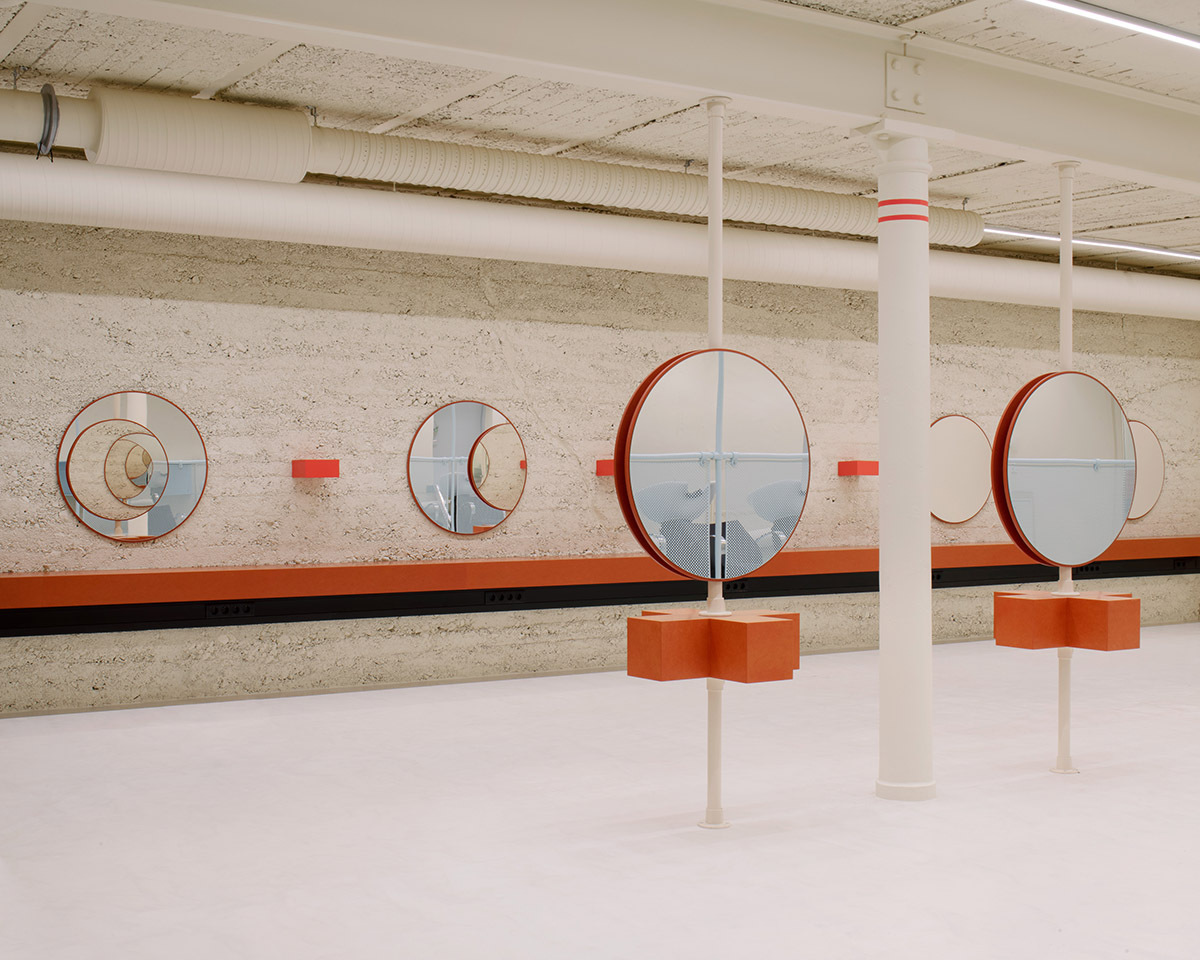 The L-shaped layout includes a large space for the main studio, a photo studio, office, VIP studio and a color lab.

They are comprised of a wall mounted, floating side table, circular wall mounted mirrors and square shaped display shelves protruding from the wall. 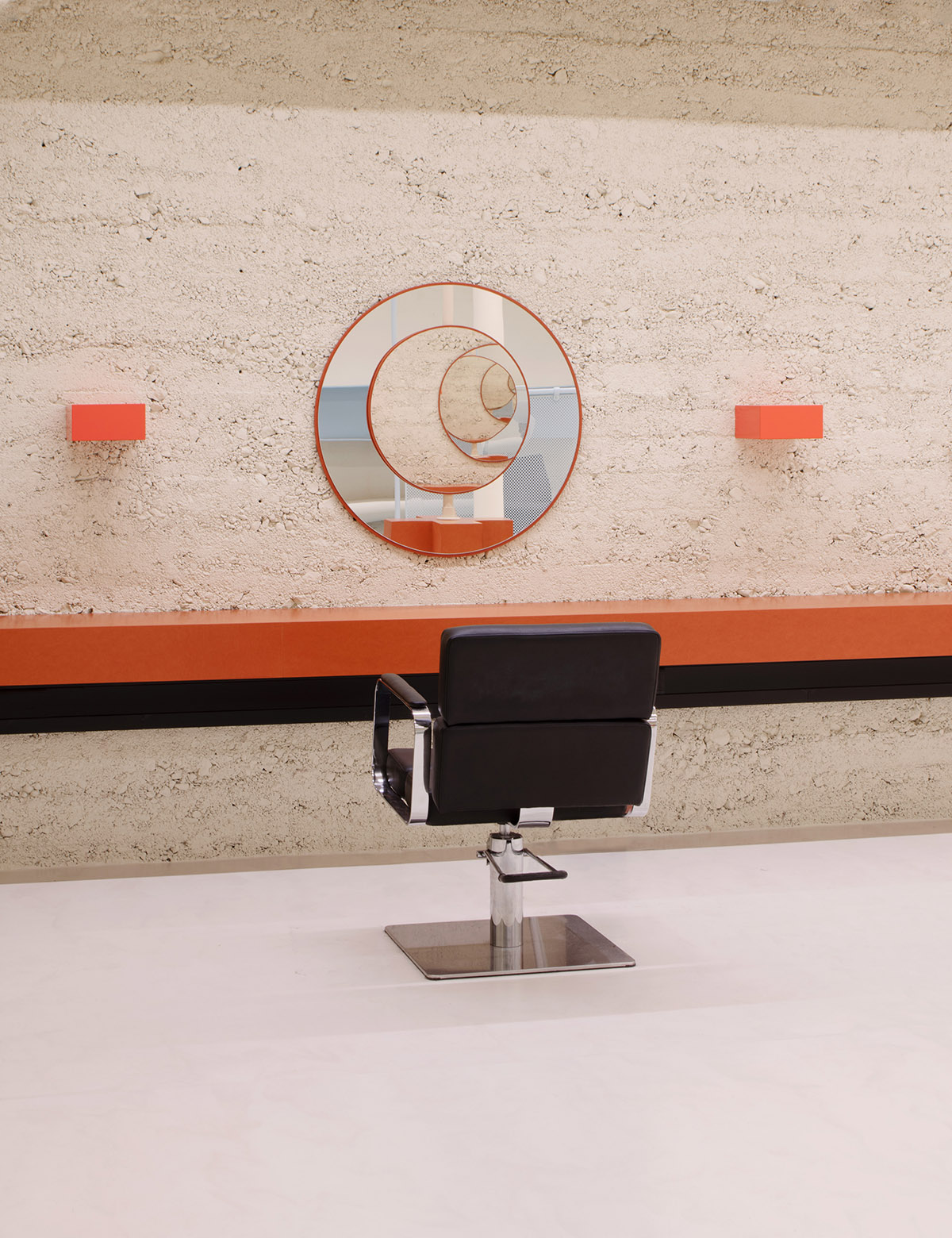 A separate space is dedicated to five washing stations and the space is divided by steel tubes and covered by a semitransparent metal surface, giving privacy to the slightly elevated washing area yet keeping the overall openness of the space.

Inside, the architects used a light-toned colour scheme, which is actually, a muted version of the three primary colours - yellow, blue and red. They painted the entire space in a creamy, powder yellow tint.

They described the space as "a muted backdrop adding to the colorful creations of Little Faktory."

"The creamy colour lends a timeless feel to the space, softening the concrete walls and ceiling and giving it travertine-like qualities."

"The red is used in were cutting and styling takes place, and the blue were water and colour is used," the architects added. 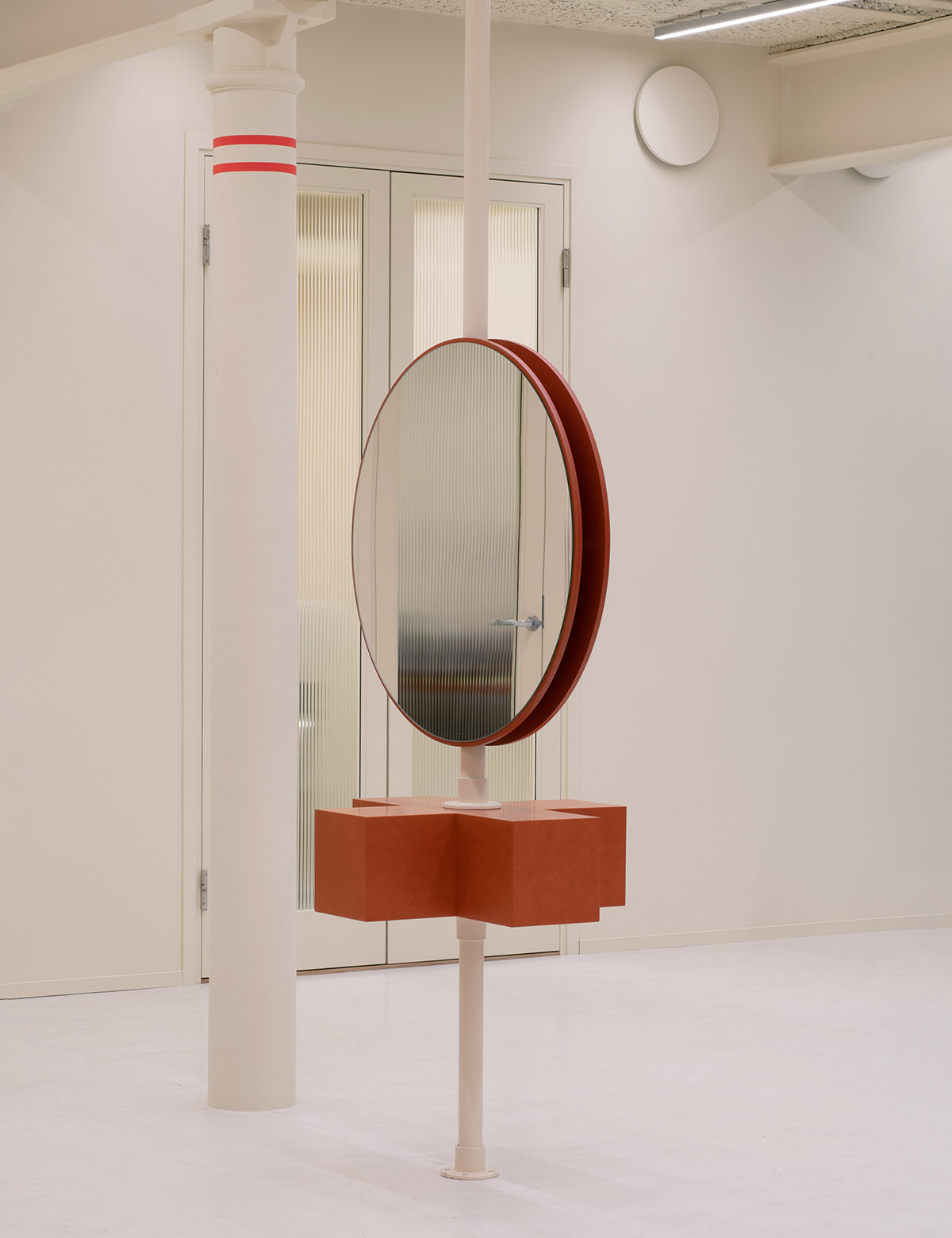 For the overall shape of the cutting stations, besides a set of light and airy additions, the architects used two basic shapes: the circle and the square.

The team conceived the stations as free-standing cutting stations, combining cross-shaped side tables set in floor-to-ceiling steel tubes with mirrors and turning them into a single design element. Steel tubes act as the main supporters for both the mirror and the tables.

"The placement of the mirrors creates infinity effects of colours and shapes, adding to the openness and playful feel of the studio," added  Westblom Krasse Arkitektkontor. 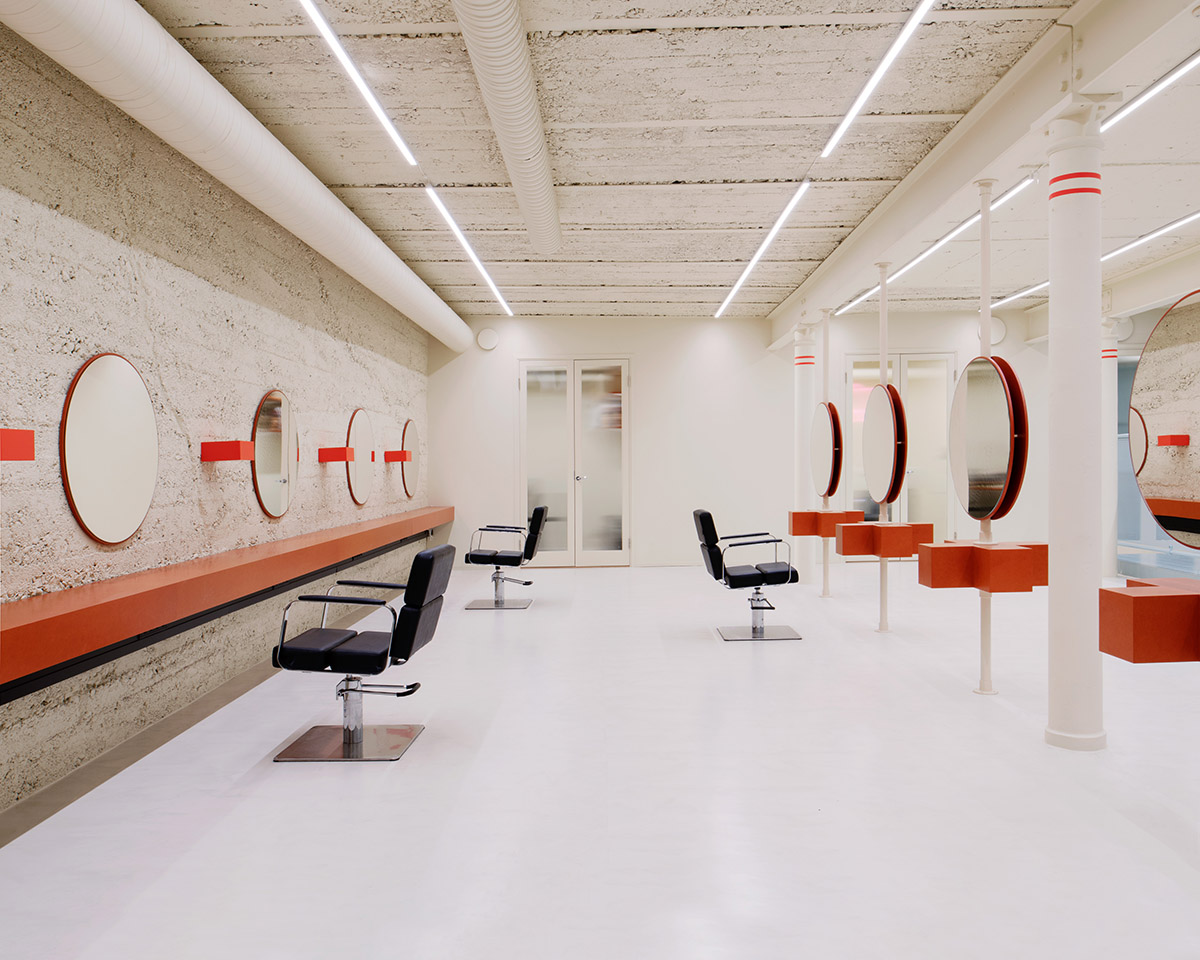 Along the back wall three sets of custom made, the team used glazed double doors. For the customer toilet, the studio designed two custom mirrors in the shape of colour splashes and placed them opposite to each other further exploring infinity effects as one of the central themes. 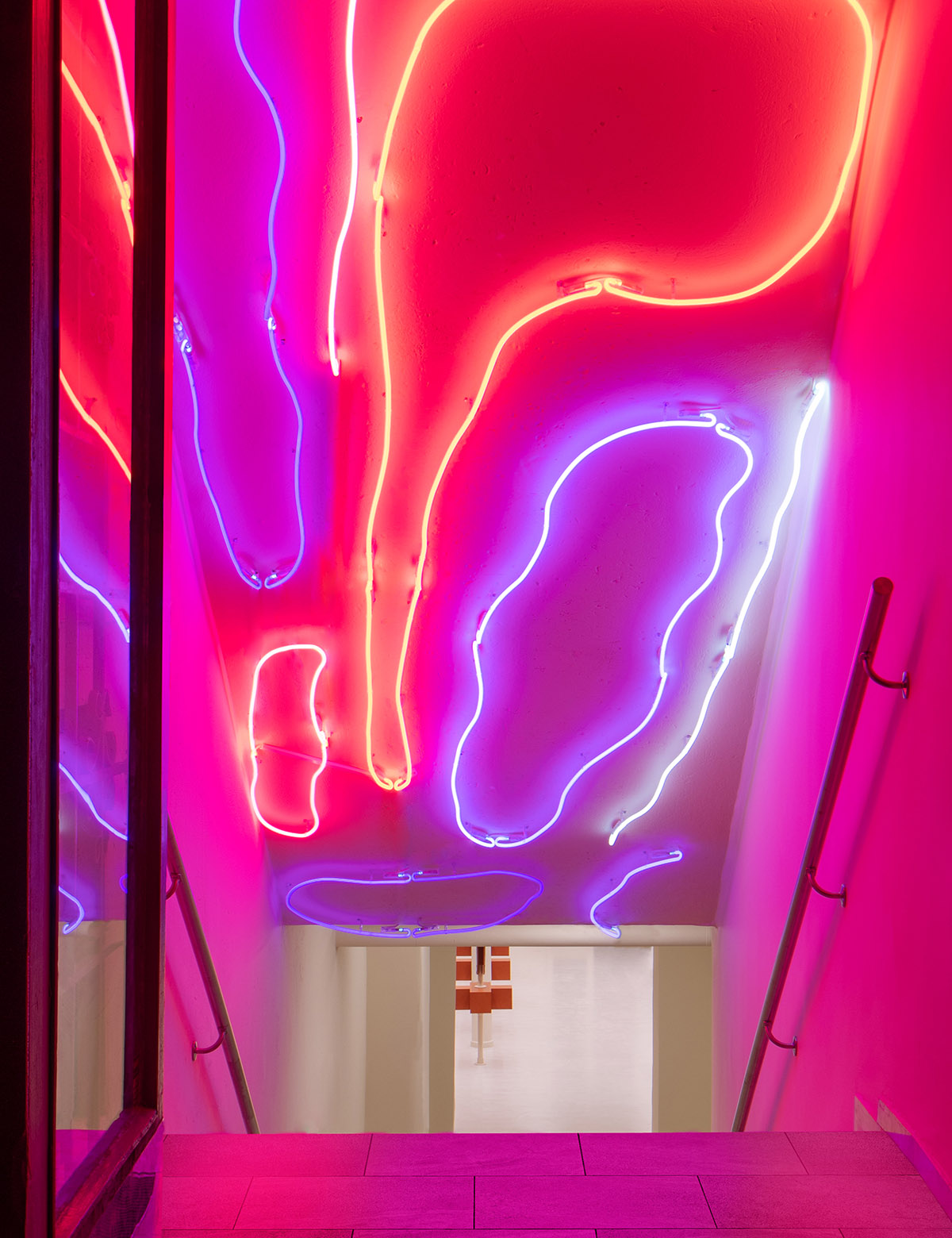 The other side of the salon includes gallery, storage, technical room, staff room and laundry room. 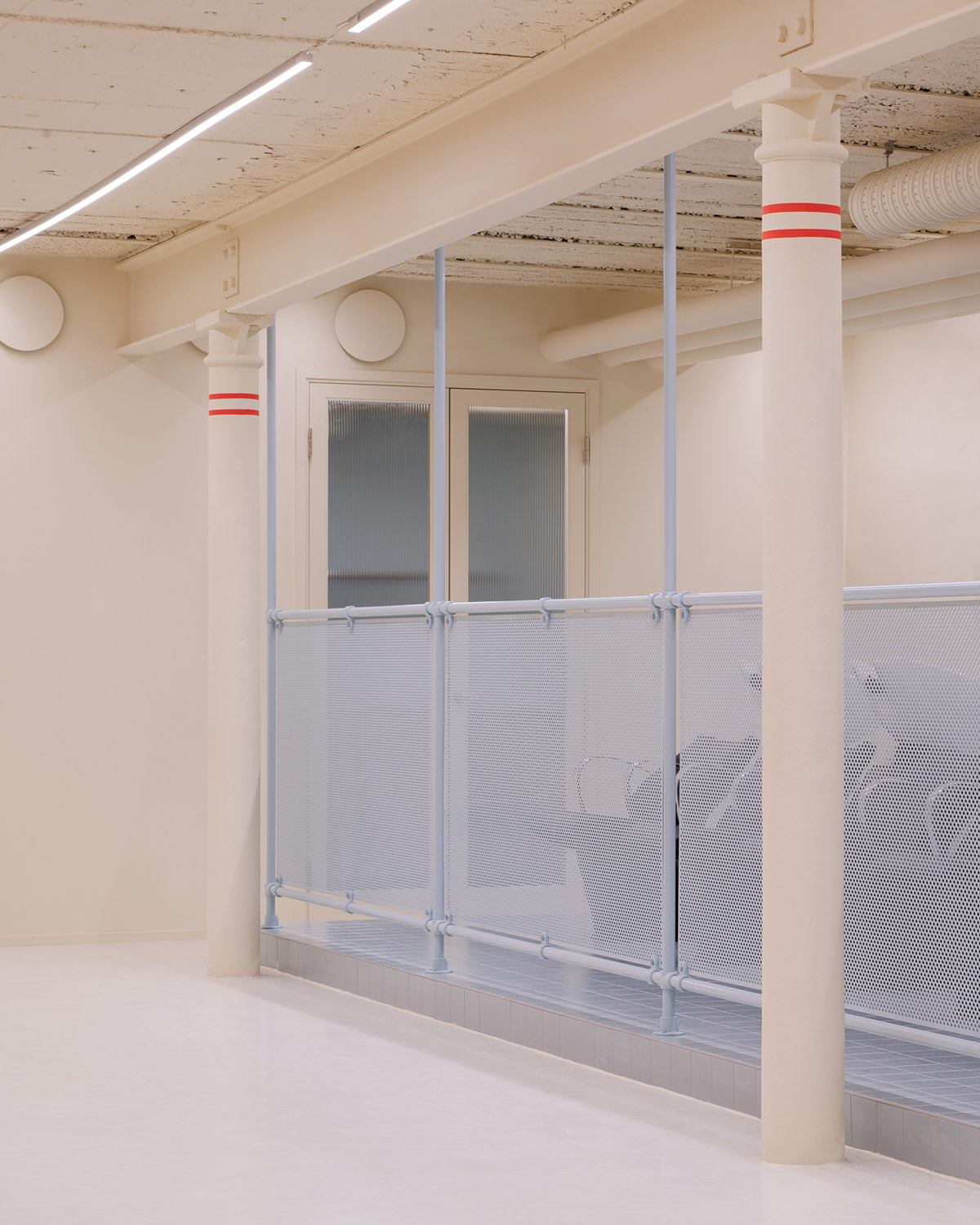 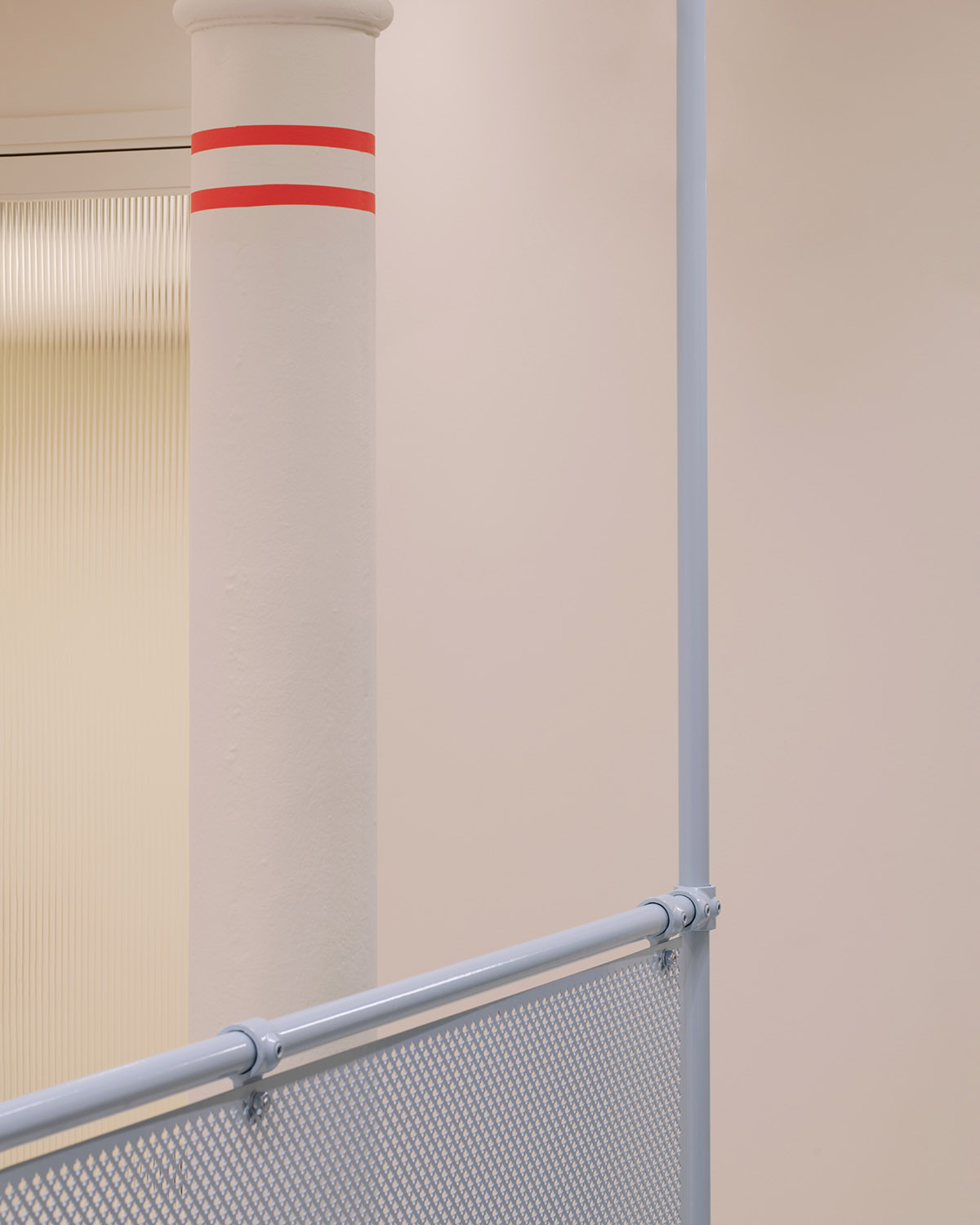 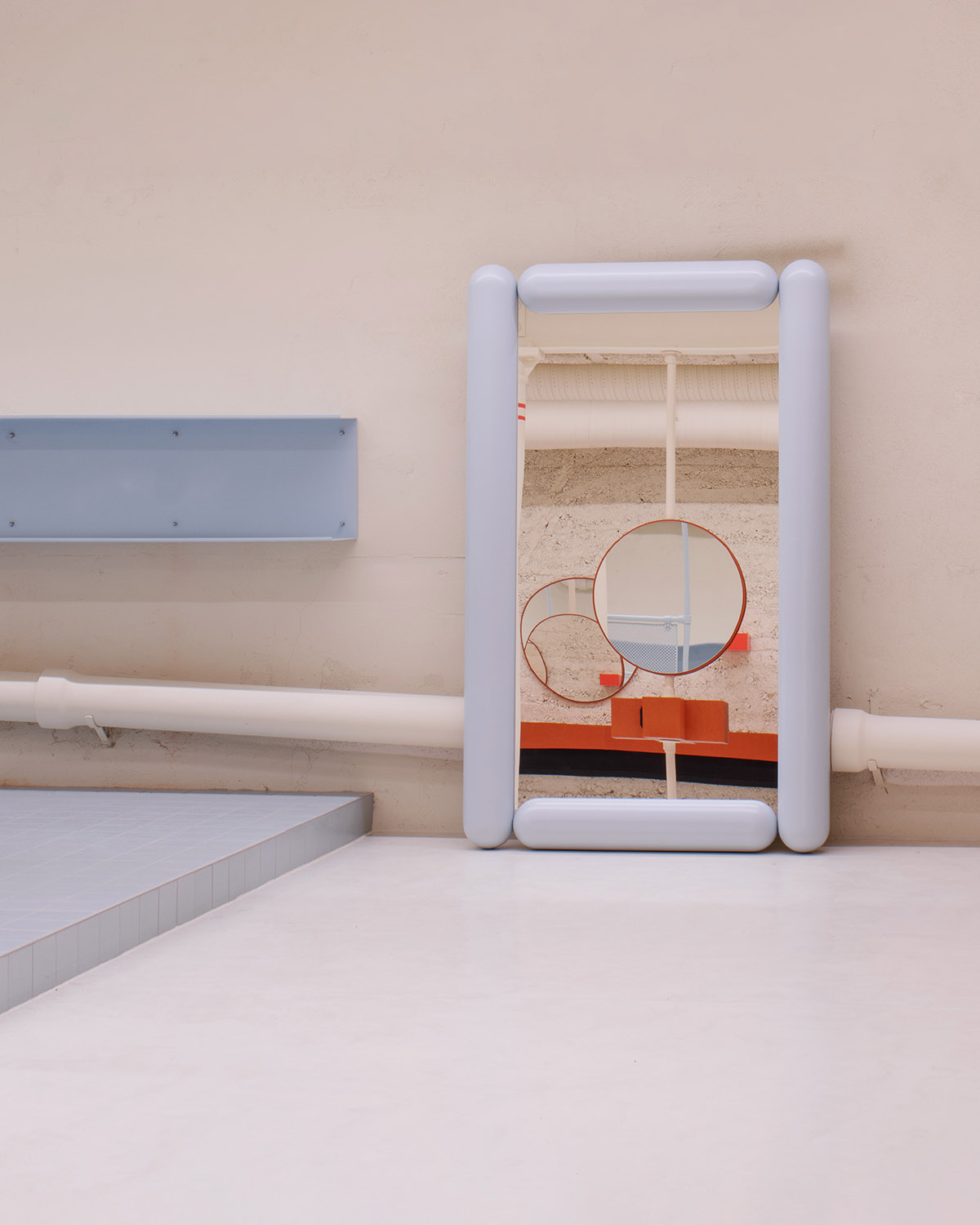 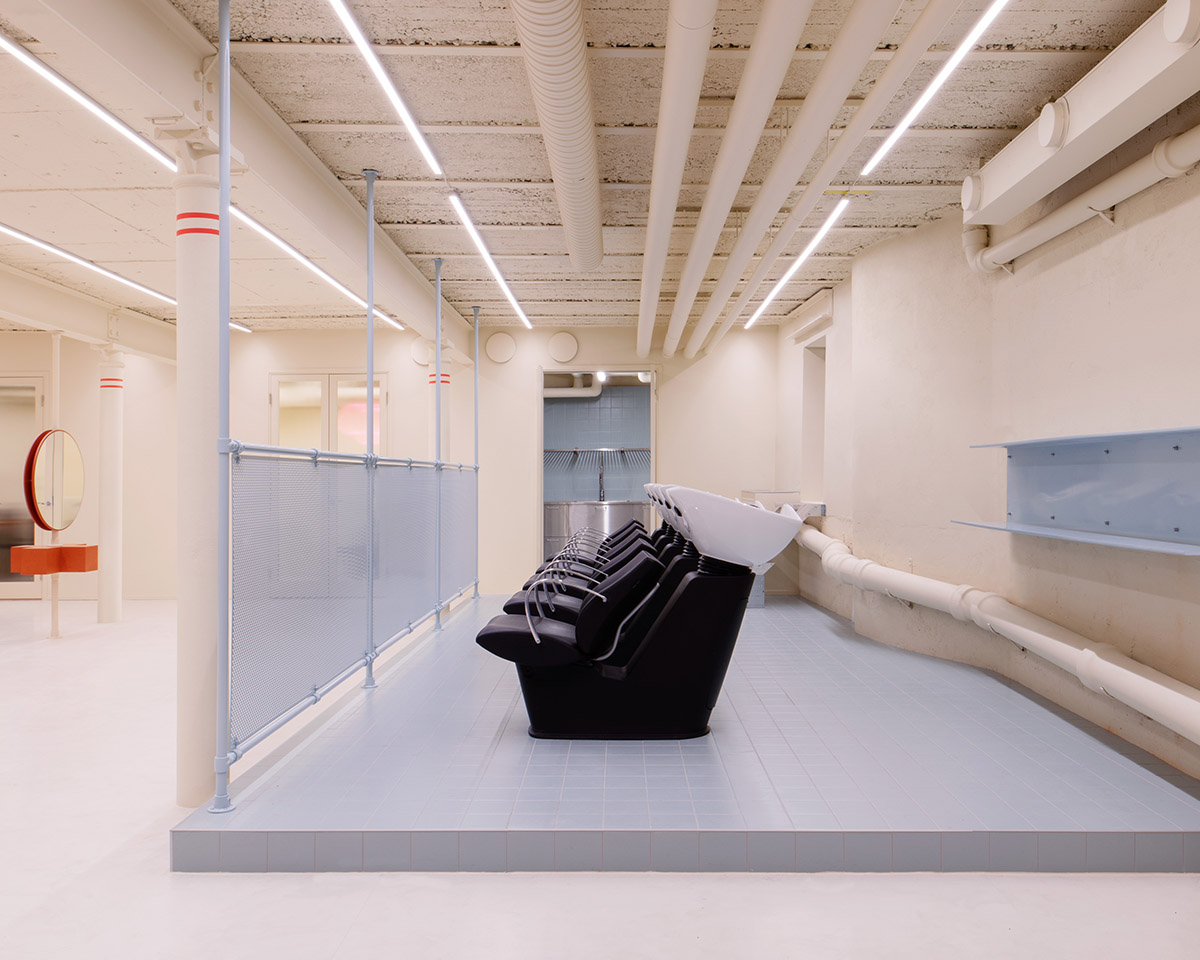 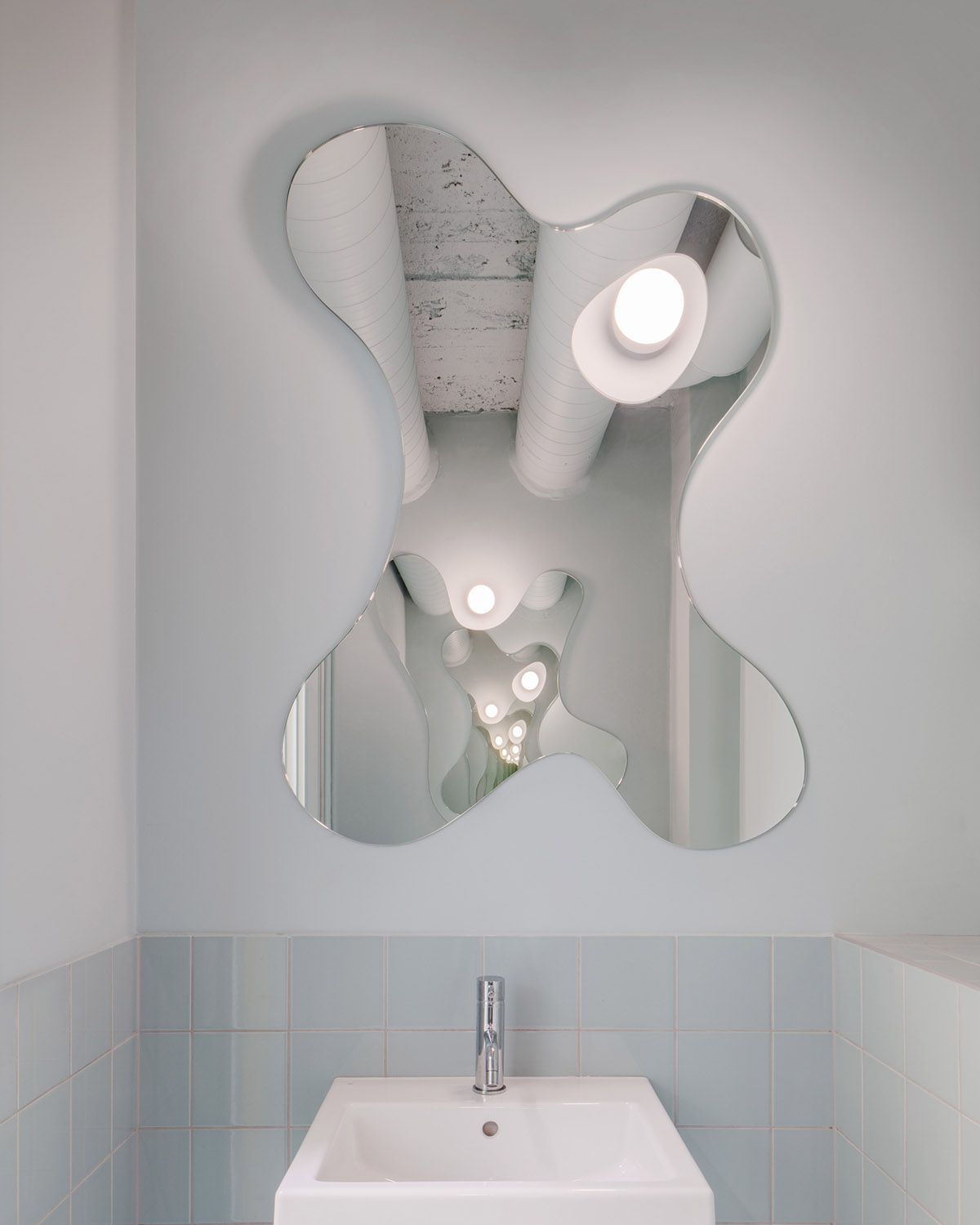 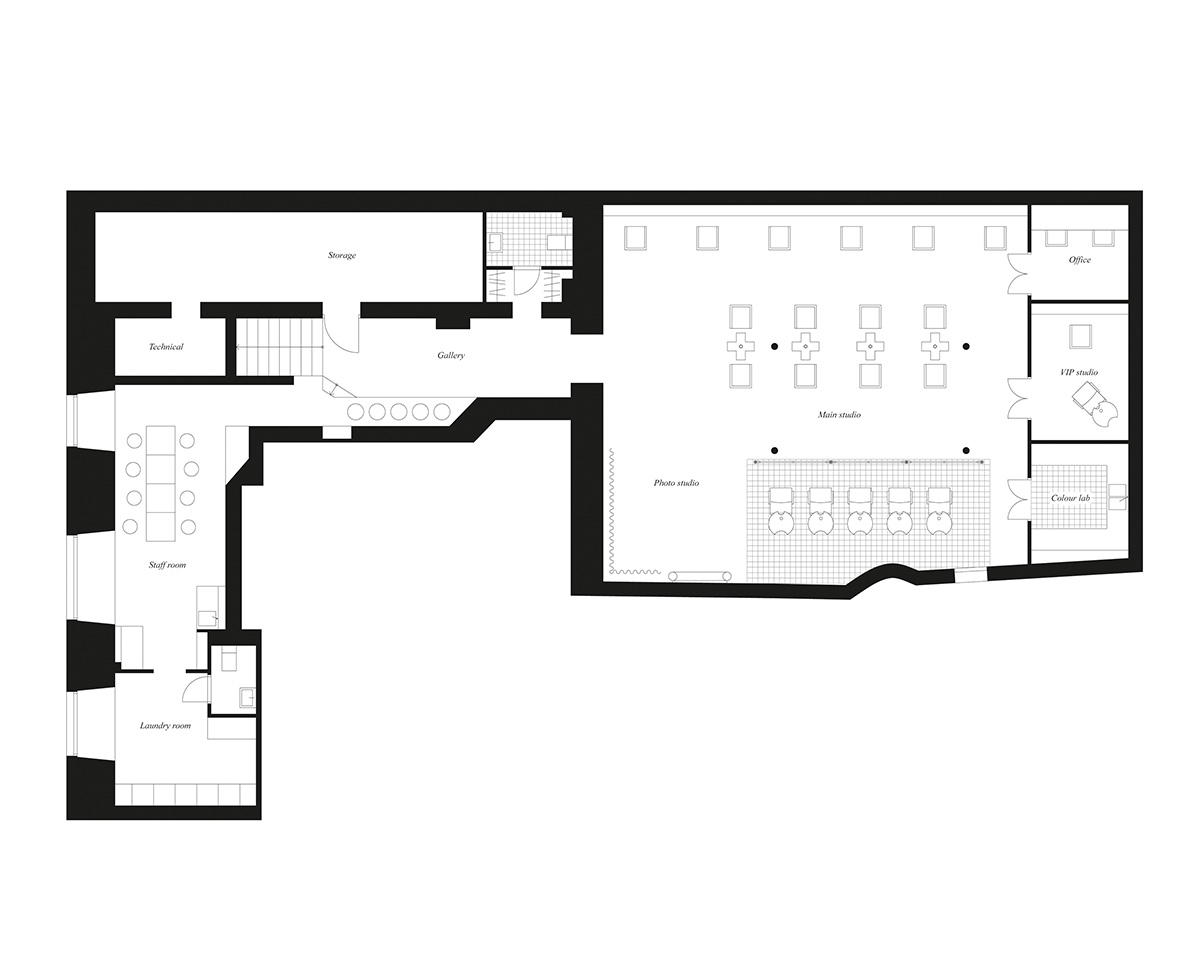 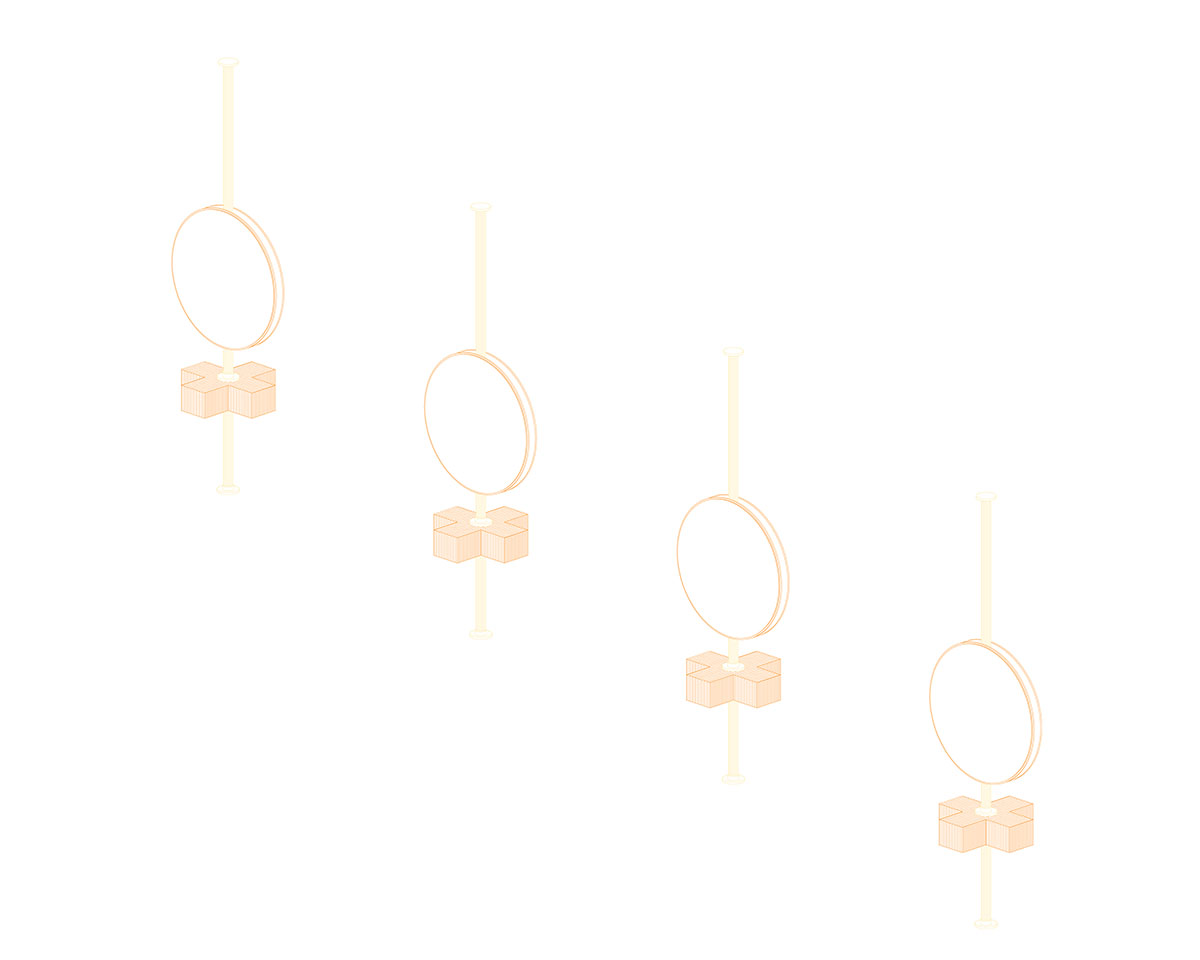 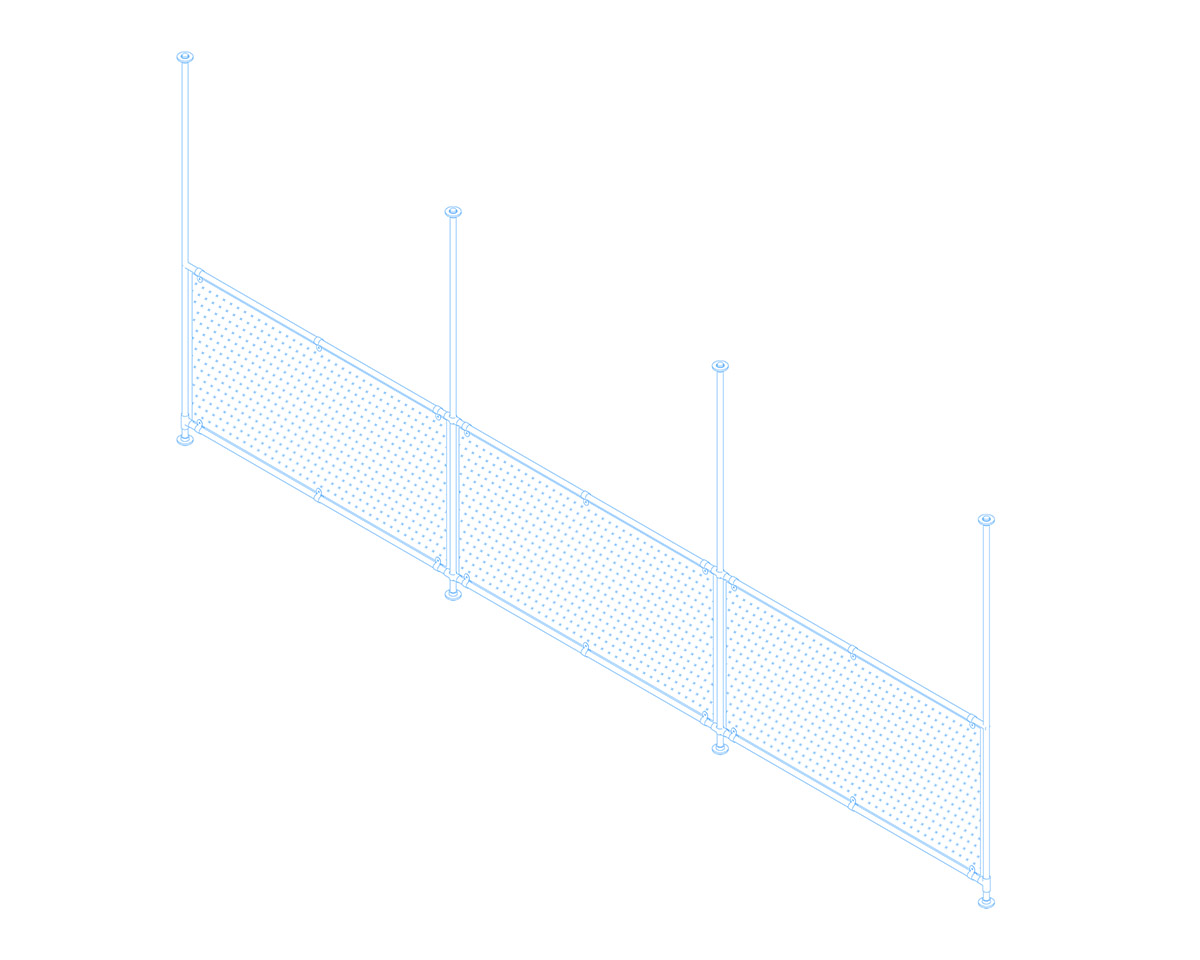 The studio designs architecture and interior spaces and objects evoking feelings of longing and belonging.