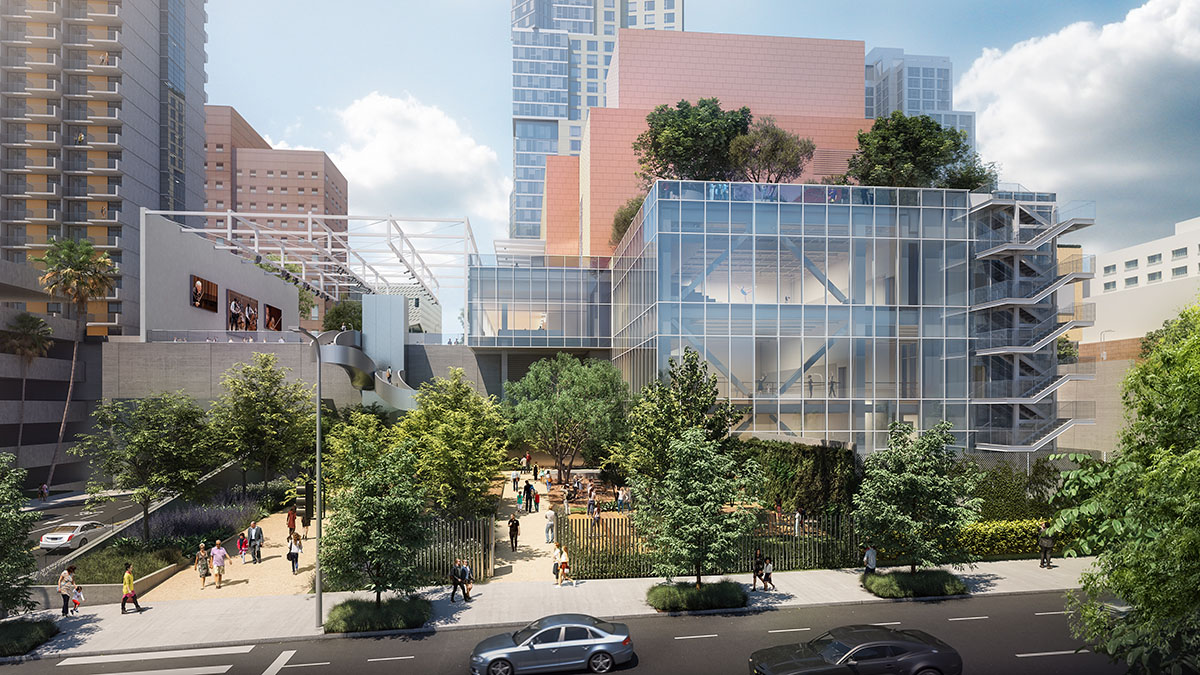 The Colburn School, one of the world’s preeminent schools for music and dance, has announced plans for its new campus expansion in downtown Los Angeles which will be designed by Frank Gehry.

The new expansion, encompassing a total of 100,000 square-foot (9,290-square-metre) area, will be located across the street from the School’s existing campus in the cultural corridor that includes Walt Disney Concert Hall, the Music Center, the Museum of Contemporary Art, and The Broad.

The transformational expansion project is aimed to inspire and serve the region’s young performing artists and performing arts organizations and ensembles. 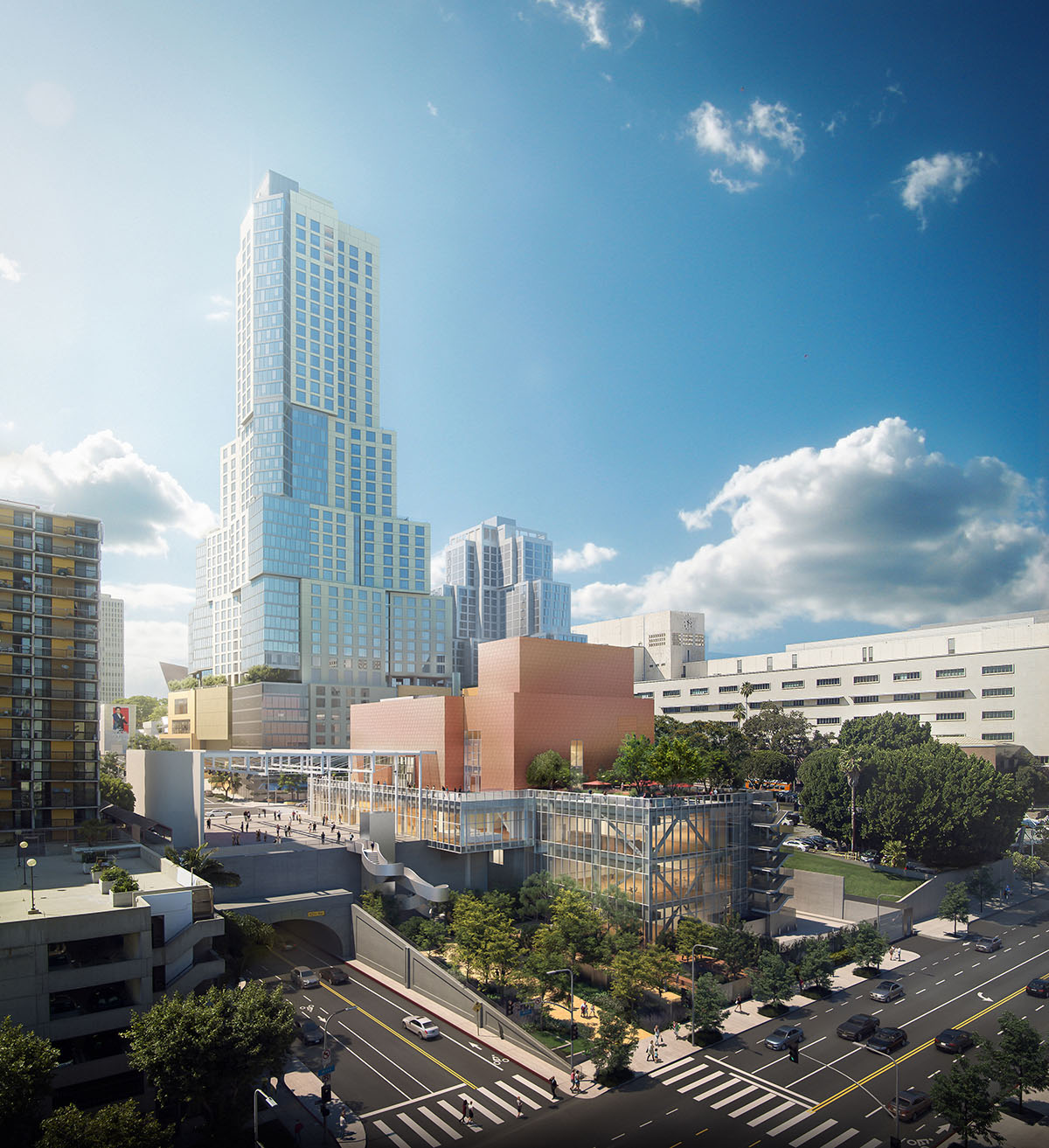 The plans, conceived as a major contribution to the cultural and civic life of Los Angeles' downtown, will enhance the capacity of the School's campus with new performance and educational programs. The project is intended to create a space for "an even livelier hub of artistic activity."

The school will present its programs to the public, while the project will also include performance and educational collaborations with acclaimed local and touring artists and ensembles. At the heart of the complex, a mid-size hall performance space will be dedicated to the region’s established and emerging performing arts organizations.

Gehry’s design comprises a dynamic composition made of transparent and opaque interlocking blocks that slopes down from Olive Street to Hill Street. 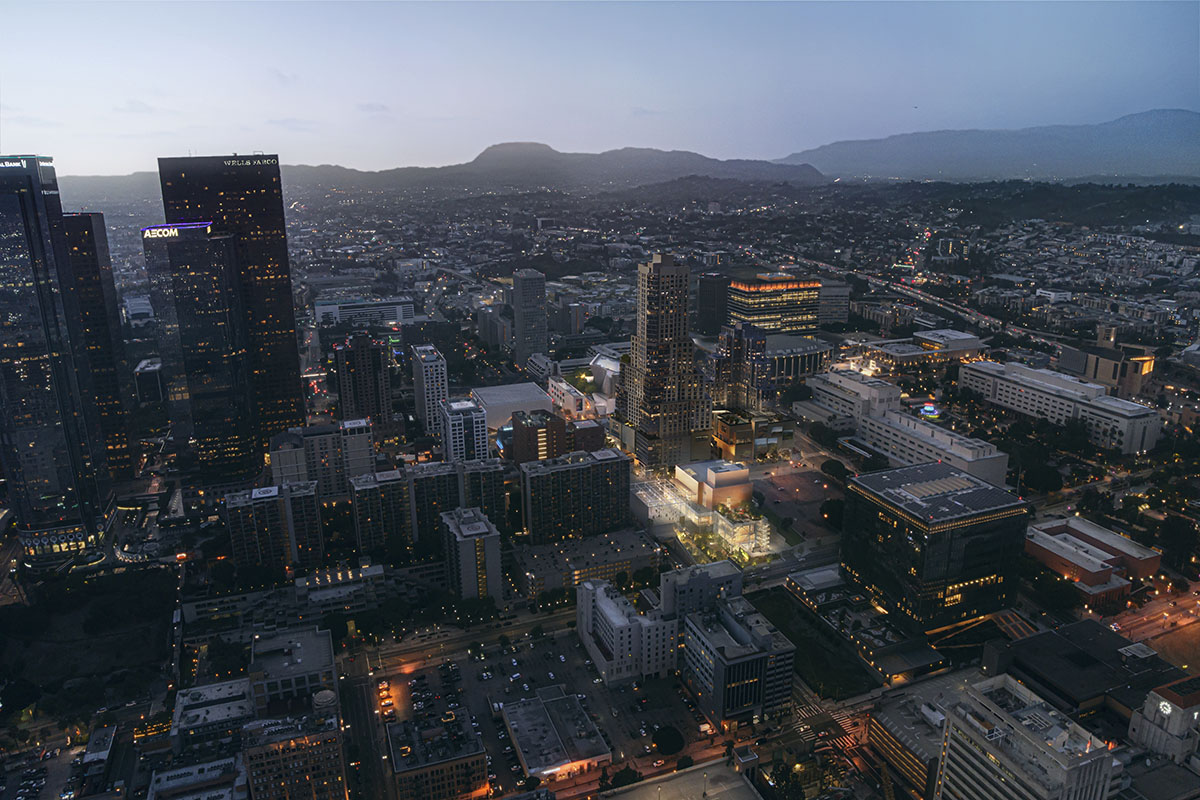 The design features a 1,000-seat concert hall that uses an in-the-round scheme to form intimacy between the performers and the audience and removes the stage lip, putting front-row seats at eye-level with the performers.

The hall will house orchestra, opera, dance, and musical theater performances. The rounded-shaped hall is equipped with an orchestra pit and a stage large enough to accommodate the grandest works and the largest orchestrations.

The project consists of a 100-seat flexible studio theater and four professional-sized dance studios. Both studios are enveloped in glass and provide a literal window into the beauty and rigor of dance training and performance. 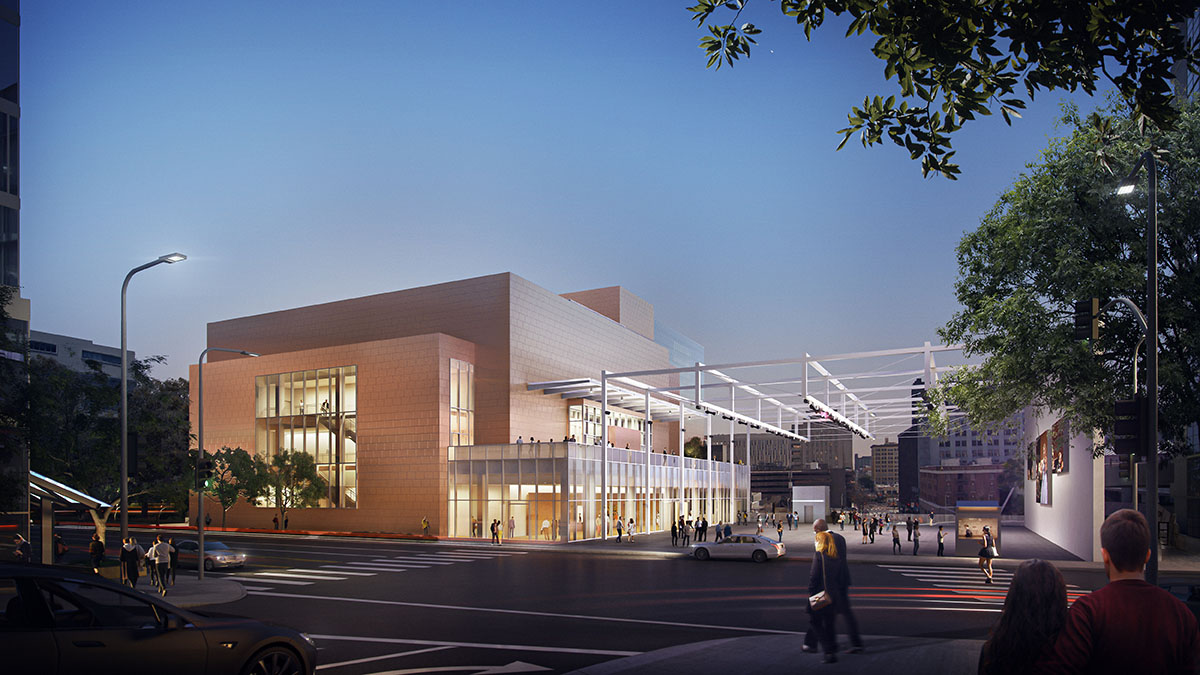 View East from Olive Street towards new urban plaza to be created at the entrance to the concert hall. Image © Gehry Partners

Dance studios, located on the east side of the complex, will have a separate entrance and have a distinct architectural character and identity. The volumes of the dance studios are wrapped by glass to be able to offer light-filled dance facilities.

"The Colburn School is an incredibly important asset to the cultural district of Downtown Los Angeles," said Frank Gehry.

"Their new hall is a major blessing for the music world of this city, and I am honored to be a part of it. I hope that we have helped create a setting to nurture and grow the next generations of talent."

On the Olive Street side, a transparent, three-story-high main entrance and lobby will lead to the building’s 1,000-seat concert hall: the Colburn School’s first venue for a full-scale orchestra and home to the Conservatory’s flagship ensemble, the Colburn Orchestra. 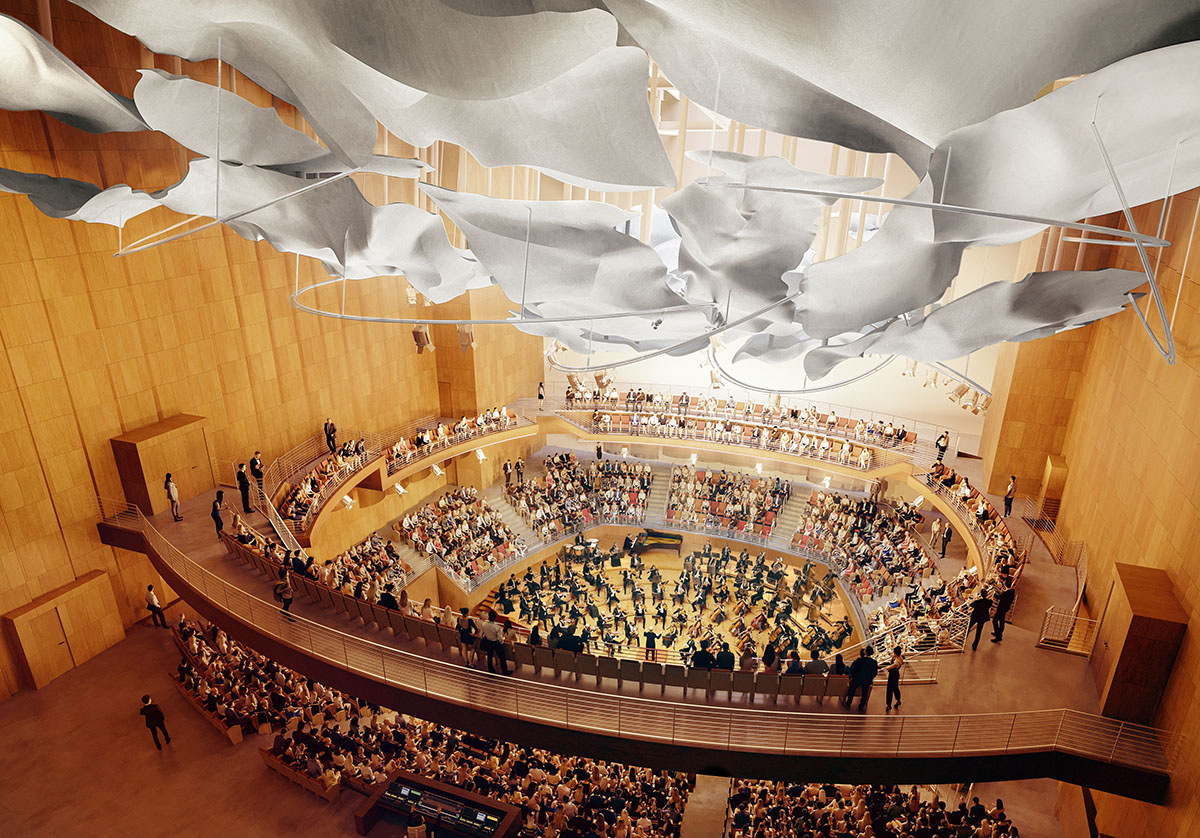 The large theatre, called Terri and Jerry Kohl Hall - named after the project's leadership donors, will feature floating balconies and tiers of seats embracing a circular stage area, as well as an orchestra pit to accommodate up to 70 musicians.

Gehry suspends the panels above the ceiling for an acoustical environment, while the panels resemble clouds floating over the hall. In keeping with this airy atmosphere, two skylights will bring daylight into the space.

Glass-enclosed studios and a studio theater with 100- seats will face Hill Street. The transparent spaces will create opportunities for the public to witness the beauty and hard work of dance training. 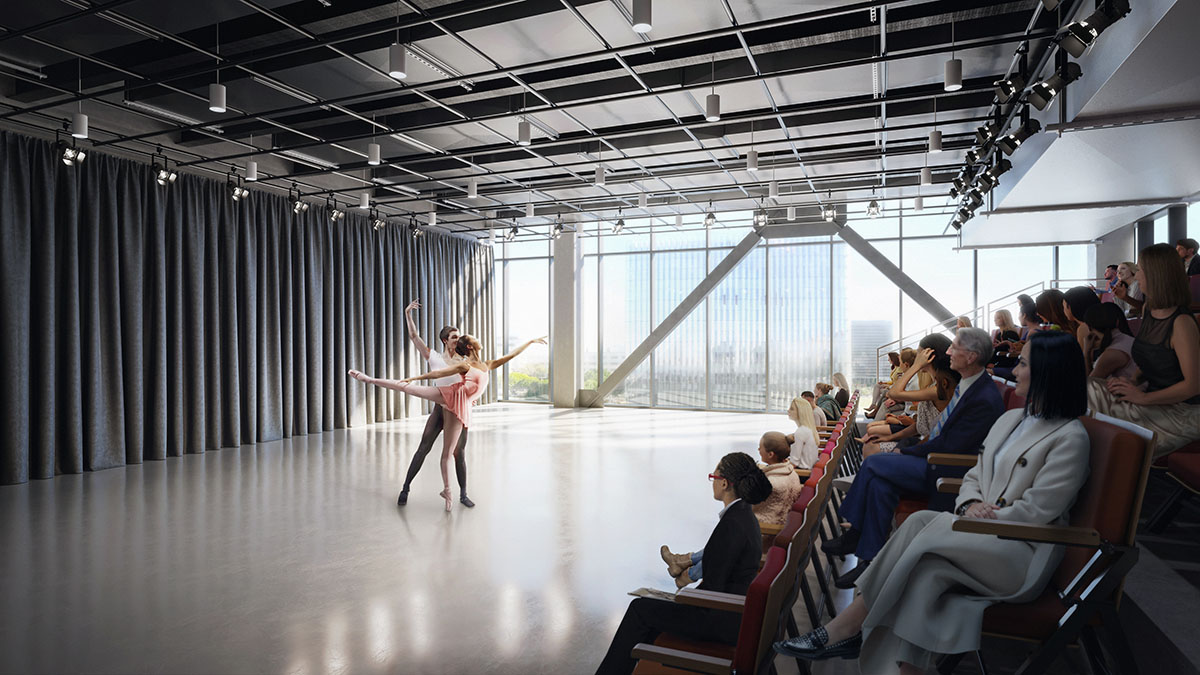 "We will be able to explore the synthesis of music and dance and be a global gathering place for the investigation of dance and music, architecture and design," Farley added. 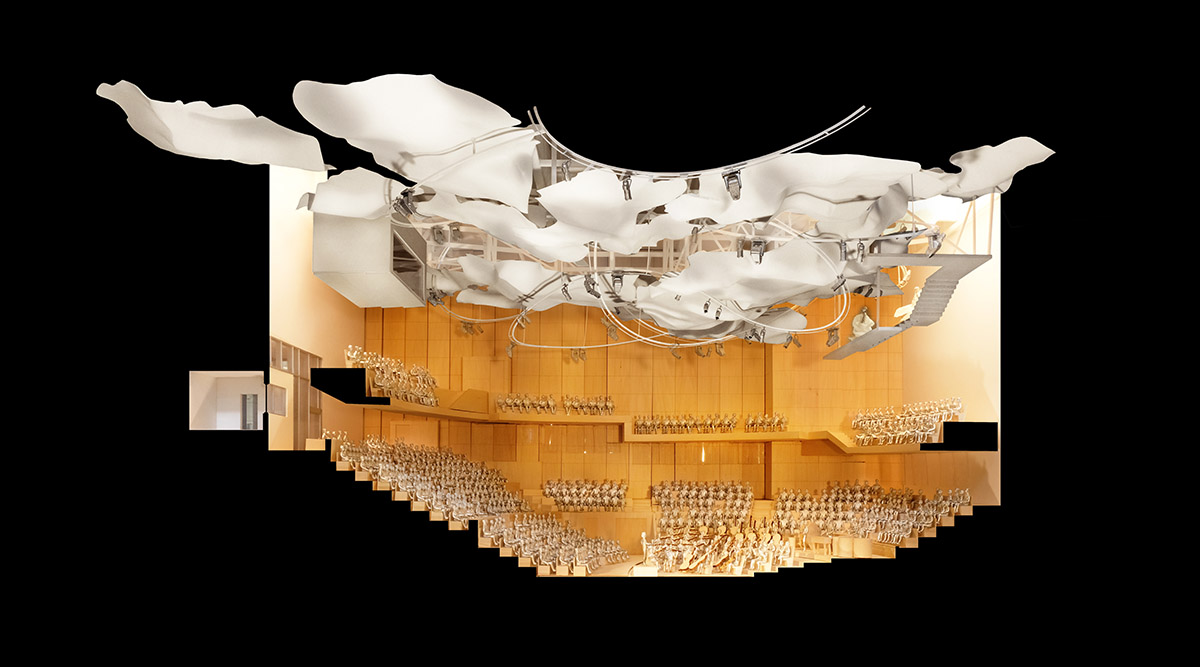 These building volumes will be complemented with two gardens and add a new green space of Downtown LA.

There will be a roof garden on top of the studio theater to offer views over 2nd Street and space for pre-performance receptions, intermission gatherings, or a place for small-scale outdoor performances.

A second garden, located at ground level, will include an area for the public as well as a gated entrance at Hill Street and 2nd Street, where students, faculty, parents, and visitors may gather, study, converse, and relax, as well as enjoy small concerts. 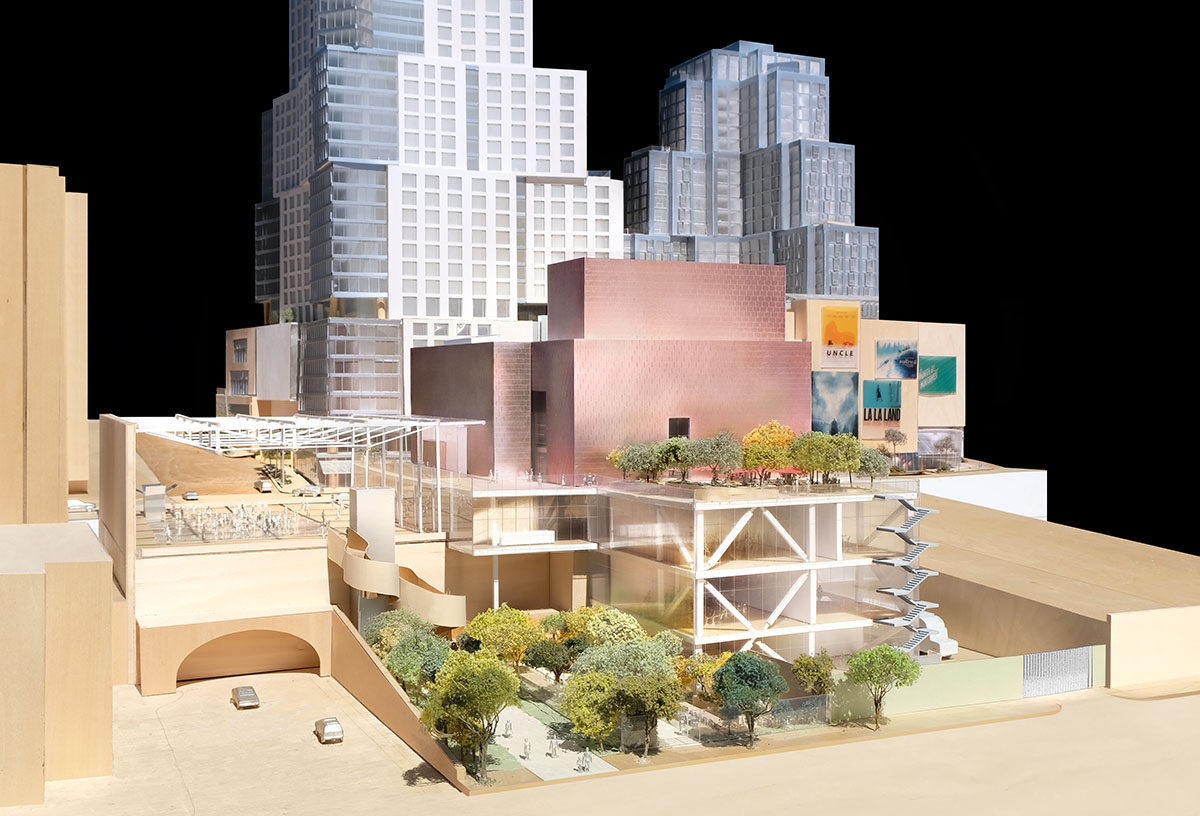 "With great joy and excitement, we share the design of Frank Gehry’s multi-dimensional project, which will welcome our students, performing artists, and audiences from across Los Angeles," said Colburn President Sel Kardan.

"The Colburn Center is a physical manifestation of the School’s founding principle of ‘access to excellence,’ allowing Colburn to continue and expand our educational and performance activities in a design which breaks down barriers between audience and performer and reveals the educational process."

"We look forward to collaborating with our artistic partners in Terri and Jerry Kohl Hall, which complements the other stellar performance spaces in Downtown Los Angeles," Kardan added. 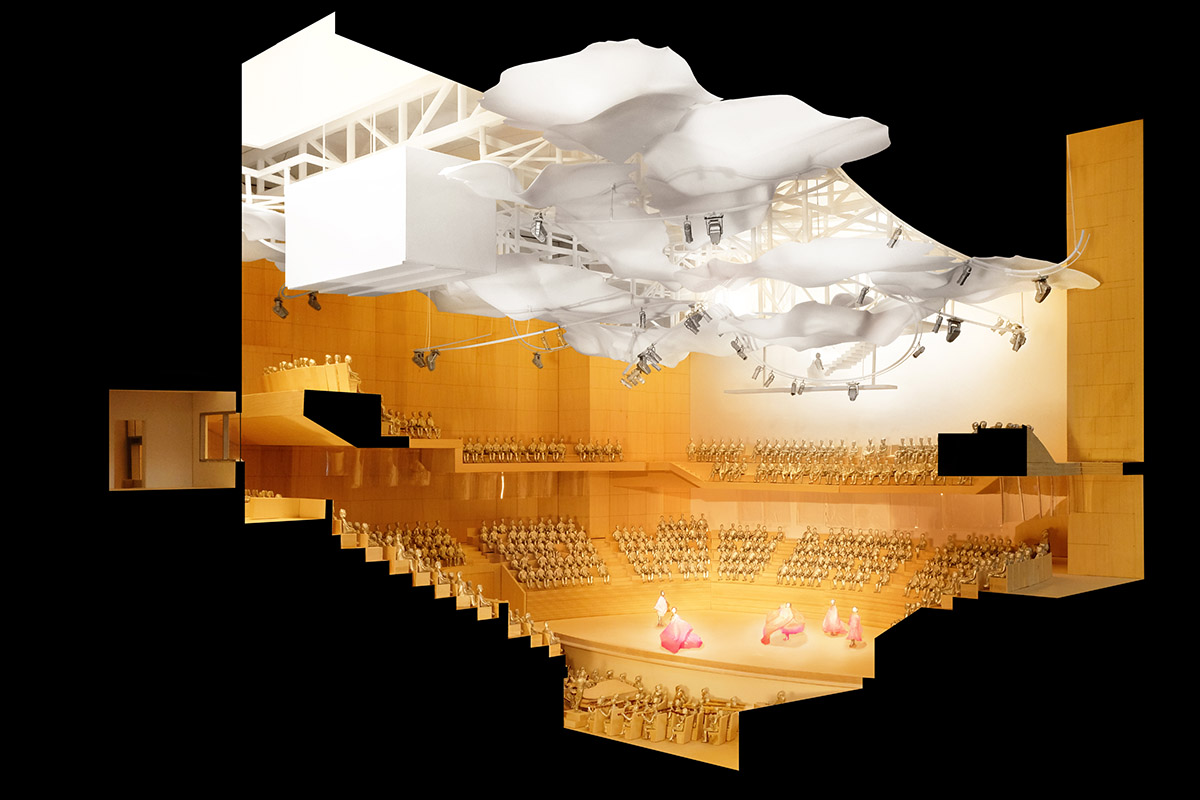 The Colburn Center is located directly across the intersection of Olive and Second Streets from the Colburn School’s existing campus, complementing and completing both its facilities and its architecture, which already support over 500 performances a year.

Gehry's new complex, which is expected to break ground in 2023 and to host its first performances in the fall of 2025, will add to the already dynamic activity at Colburn. 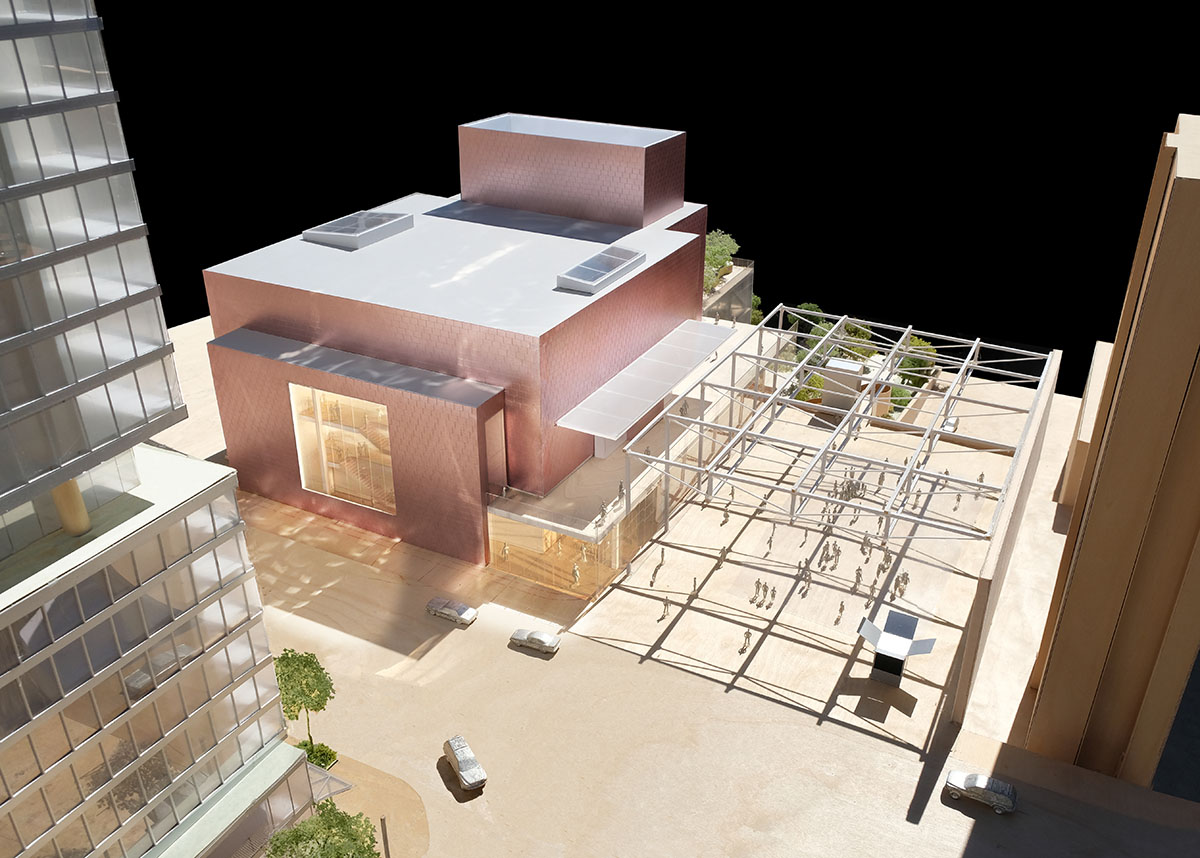 View East from Olive Street towards new urban plaza to be created at the entrance to the concert hall. Image © Gehry Partners

The Colburn Center will join Gehry's three projects in that neighborhood, including Gehry's upcoming mixed-use project The Grand and the iconic Walt Disney Concert Hall, which opened in 2003.

The estimated cost of the building is $350 million and the project has raised $270 million to date in support of Concert Hall and Dance Facilities to Benefit Colburn Students and the Community.

> via The Colburn School

Rustic Canyon designed by Walker Workshop features light-filled and creamy interiors in Los Angeles
May 13, 2022 • 1255
Kengo Kuma and Associates designs commercial building covered by plants in downtown San Jose
May 09, 2022 • 1048
World Architecture Festival and World Festival Of Interiors open for entries for Its 2022 edition
May 09, 2022 • 1040
Morphosis' University of Texas, a new arts campus breaks ground at Dallas
May 12, 2022 • 1020
Field Conforming Studio installs steel sculpture with nine hollow columns in Tangshan
May 11, 2022 • 792
JKMM Architects transforms former buildings into a new building for University of the Arts Helsinki
May 11, 2022 • 771