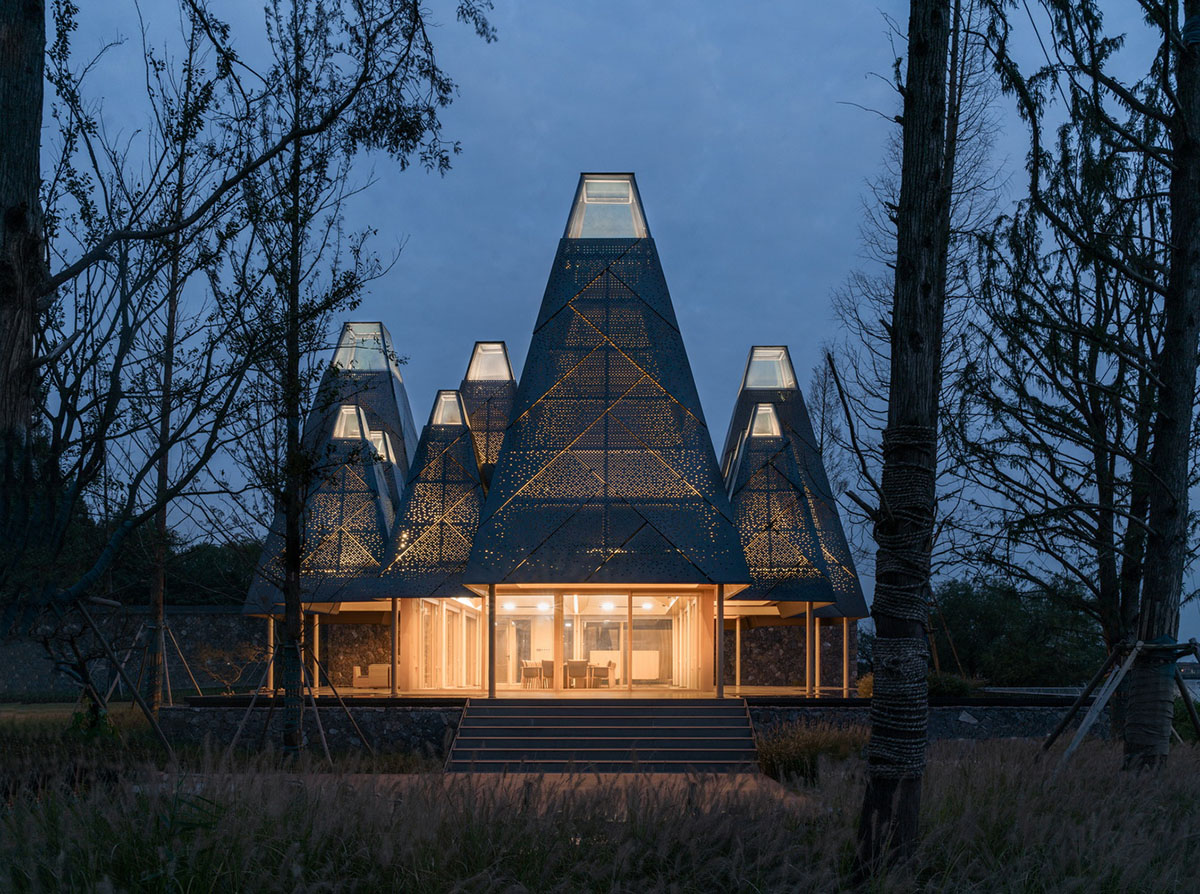 Chinese architecture practice goa has translated the forms of the metasequoia trees into wooden pyramidal canopies for a restaurant in Suzhou, China.

The studio completed the project as part of the rural revitalization plans - named the "Wujiang · Beautiful Village", launched by the Chinese government in 2020.

"Areas around Zhongjiadang, and Suzhou would be the first launching zone of the program," said goa whose has offices in HangZhou, ShangHai, BeiJing and NanJing.

"This proposal aims to promote local agriculture, culture, and tourism as significant drives. This project is within the proposed launching zone."

The restaurant was realized Goa's first low-rise leisure-led complex development situated on the west side of the San Wan village, it is not just a restaurant, it is conceived as "a welcoming public living room" for the whole community. The project was the first developed building as part of the whole masterplan.

The project not only functions as a restaurant that can provide dining space for visitors but also as a small multi-functional banquet hall to accommodate various public events in the region.

"This individual project aims to carry more employment opportunities and sustainable economic benefits to the area," the studio added.

The project takes cues from its architectural landscape and its elements, such as water, sky and he scene.

The architects said that "As a traditional village of the Jiangnan region situated on the vast swamp plain of Taihu, Shan Wan village was built by the water."

"Water, sky, and the village constitute a magnificent spectacle that spreads itself out in serenity. Instead of being an architecture, The Restaurant of Metasequoia Grove is more a landscape that immerses its natural context and eventually becomes a part of nature. It delivers a joyful moment by the water and a peaceful experience of nature where architecture enables new ways of seeing the landscape."

goa translates Nature into the Artificiality

A grove of metasequoia trees inform the overall language of the restaurant. As the studio said, the trees quietly standing by an enormous expanse of water in the south becomes the only nature skyline in this plain terrain.

The architects used the forms of the metasequoia trees to abstract them and translated into a purely geometric architectural language, then created a pyramidal frustum and applied to the building's roof as a featuring icon and a modular inspiration for the design.

A pyramidal frustum module is made of three sizes and forms small-medium-large modular order based on the mathematical relation of the square’s side length on the bottom of 2:3:4. The program, which sits on a grid layout, creates its own pyramidal roof according to the size of the grids.

In the end, the pyramidal composition forms three different scales of modules that are mixed and clustered together. Thanks to this composition, the building forms a continuous canopy structure that creates an artificial forest profile within nature to simulate the natural substances’ generative process.

The canopy’s overall height control is solved under 12 meters. Each pyramidal frustum module has a small skylight to allow natural light to enter the building moderately.

The structure of the roof system is made up of three layers: the outer layer consists of customized perforated aluminum panels, textures as the layering crowns of metasequoia trees, glass is used in the middle layer introducing greater luminosity, and grilled wood panels are used to cover the inner layer.

"The project offers visitors a new perspective to experience the landscape. Eaves of the canopy are uniformly lowered to 2.7m, framing a horizontal scroll of wetland scenery that captures the vastness and tranquility in the imagination of a traditional Chinese painting," said the office.

"Air vents are set to ground level alongside the windows to reduce visual interference."

"Standing under the eaves and looking out, the vastness and tranquility of the plain wetland seem to be captured in the picture. Air outlets are also set to ground level to reduce visual interference in the low-cornice roof interior," the office added.

Although the canopies gave the impression of a heavy appearance, lightness was important to the architects. To emphasize the lightness of the canopy, the team used load-bearing columns that are minimized to 10 and were arranged around the interior edges of the interior space.

"Each low-bearing column is grouped by a cluster of 3 slender steel columns, individually with a diameter of 10cm," the office explained.

"Only 11 steel columns with a diameter of 15cm are set along the edge of the exterior terrace under the eaves. Each cluster of columns aligns with a corresponding edge of the wooden ceiling structure and window frames, united in color."

The design also follows many strategies to maximize transparency between interior and exterior by removing the boundaries around it.

For example, the architects used a consistent paving material to the under-eave terrace that allows a sense of space extension connecting with a peripheral infinity waterscape.

This is complemented with the existing water body, to create coherence between the architecture and the natural wetland.

They also increase the large visual openness of the space by using customized single-bay floor-to-ceiling windows over 2 meter wide and narrow frames.

The architects added that "The Restaurant of Metasequoia Grove is an iconic small single-story project of the governmental rural revitalization program."

The restaurant is not yet officially open, but visitors have come in flocks.

"By softly blending in the waterside landscape carrying a delicate rustic texture and thus enhancing the experience of the magnificent natural scenery with architecture, the project truly realizes its design vision to construct a new landscape for the existing village," said the office. 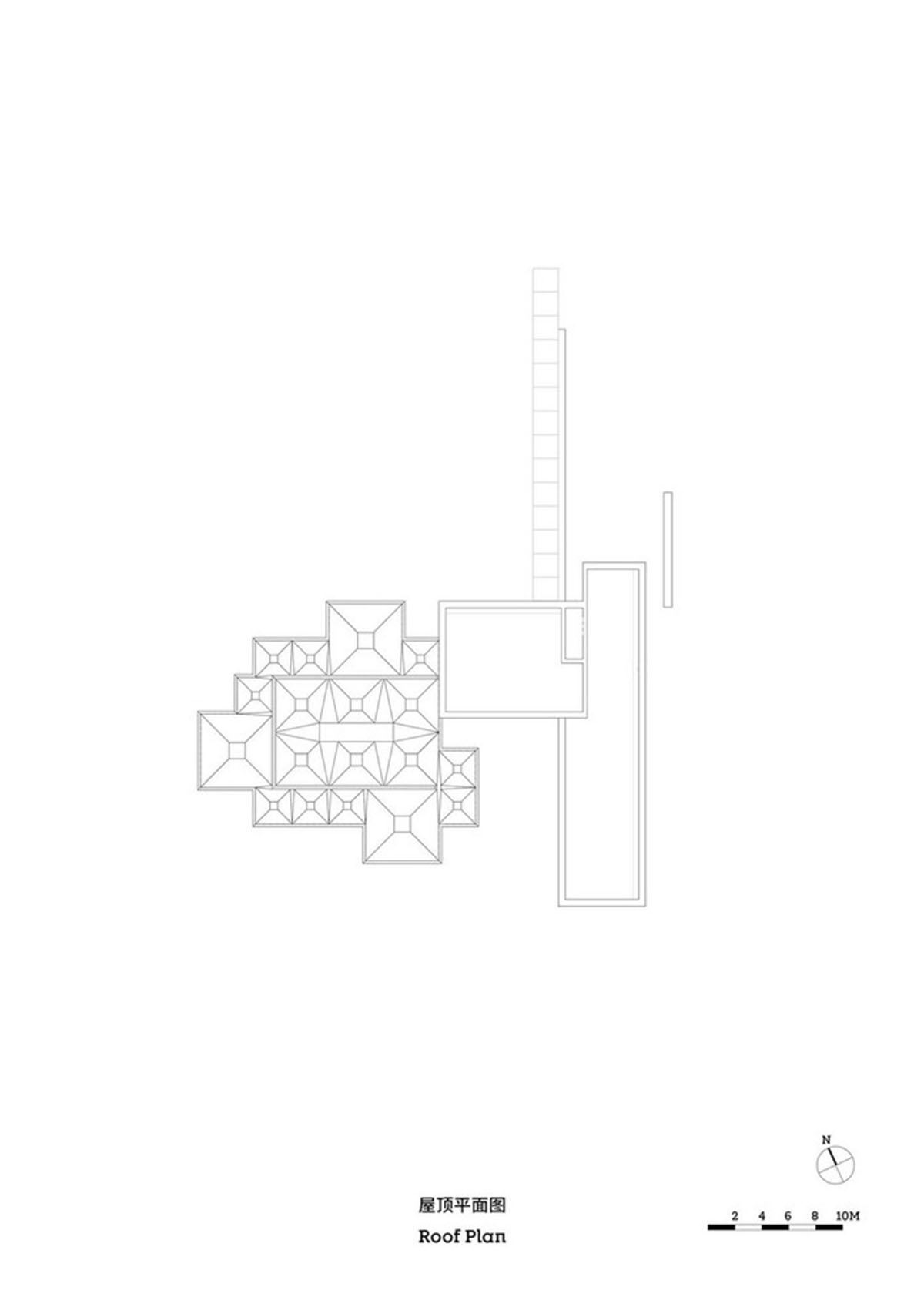 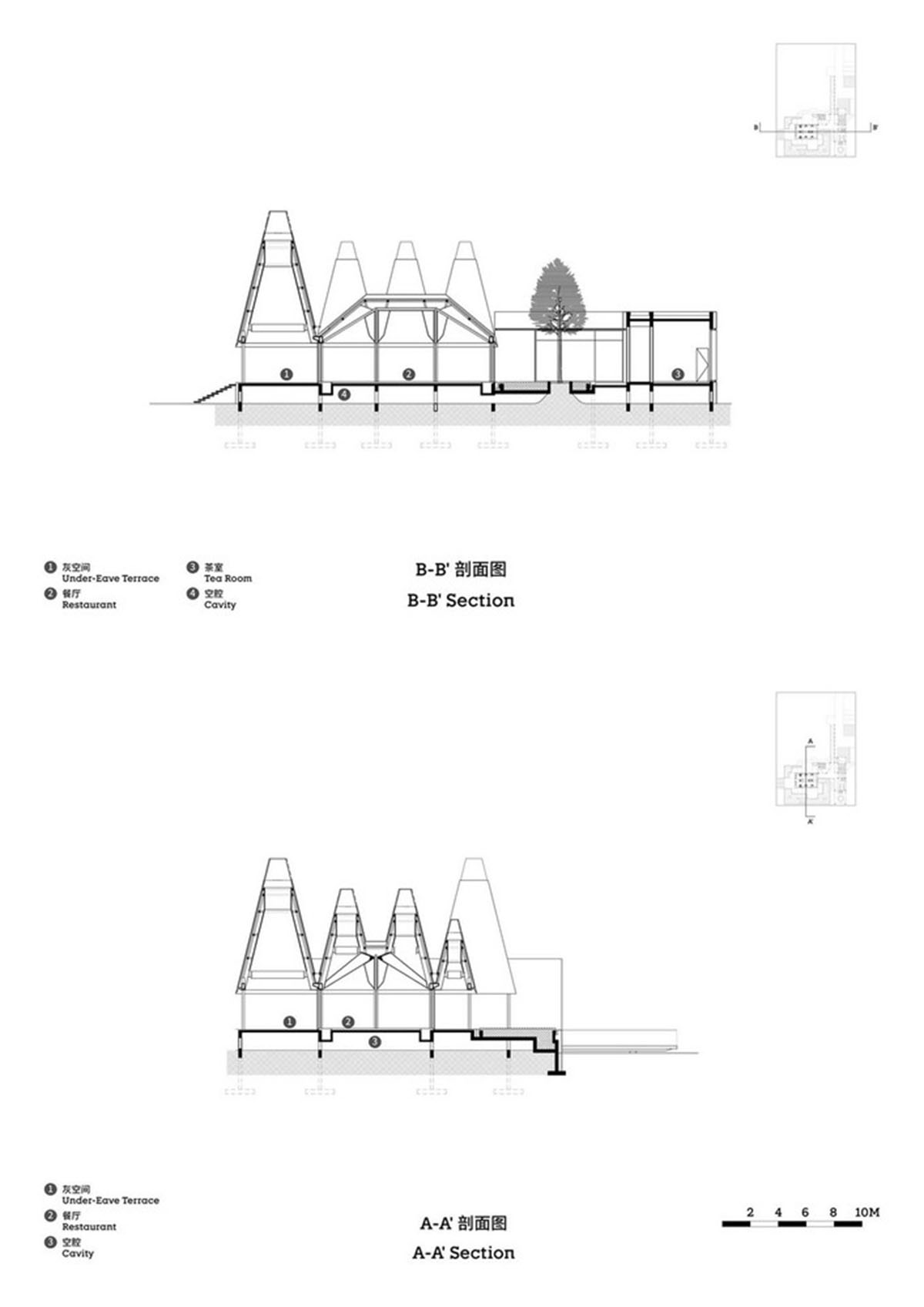 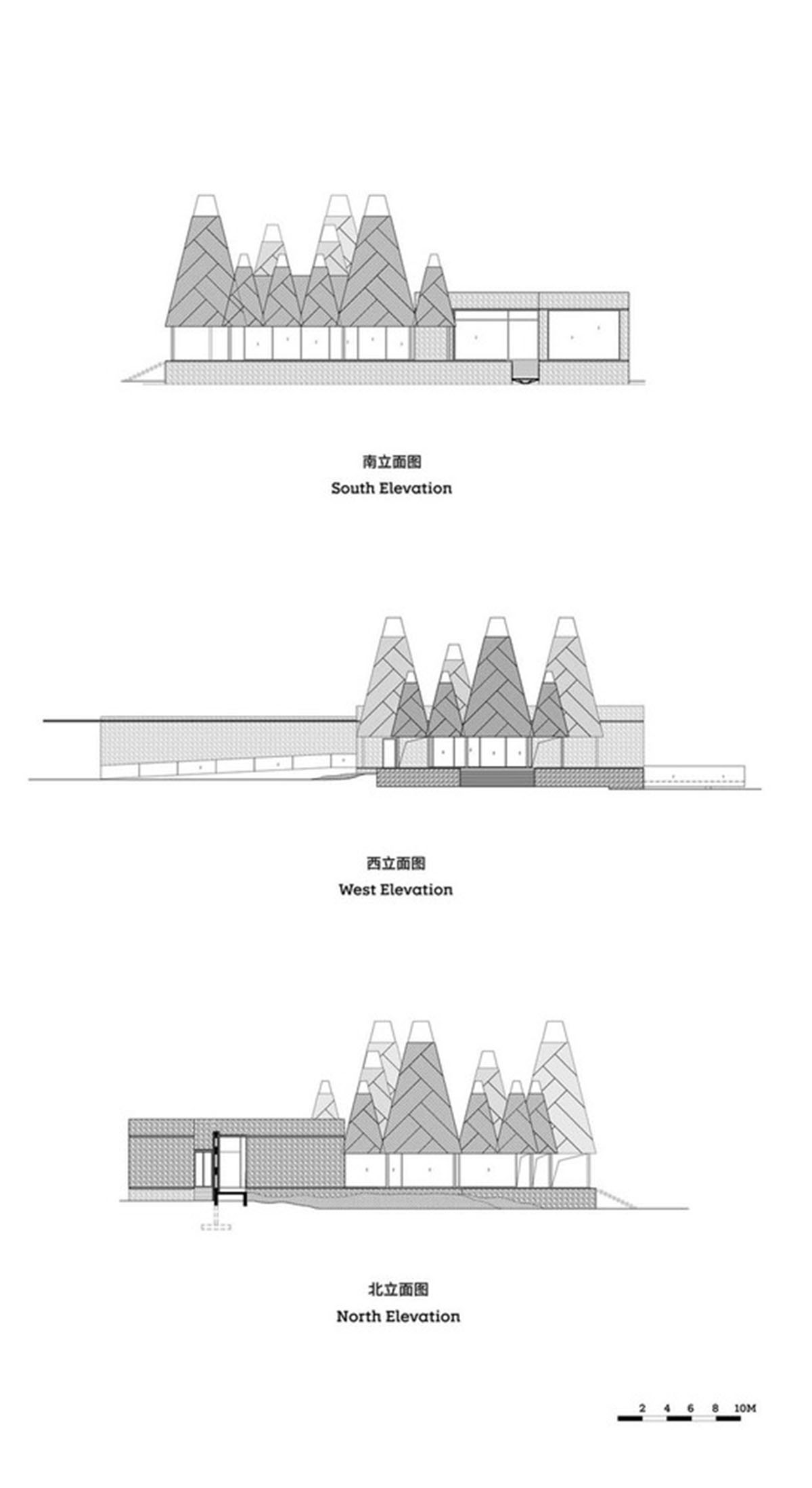 All drawings and models © goa