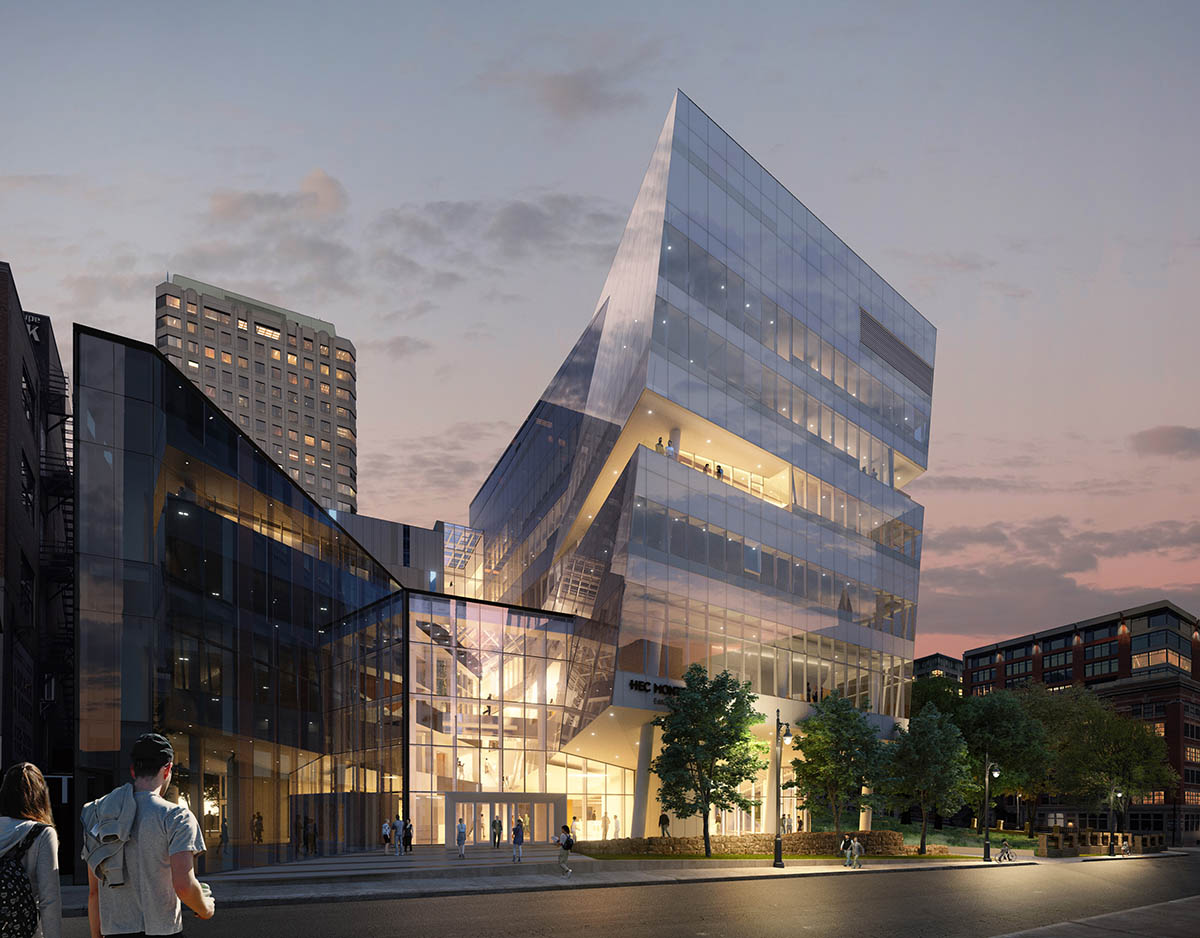 Canadian architecture firm Provencher_Roy's new university hub is nearing completion in Downtown Montreal, Canada. The project is a new downtown hub for HEC Montréal, which is a centre for entrepreneurship and research that will forge strong ties between the school and the Montréal business community.

Located at the intersection of the Quartier des Affaires, Quartier des Spectacles, and the Quartier International, the building will be a centre of exchange that spurs innovation through collaborative programs for academics and business leaders. 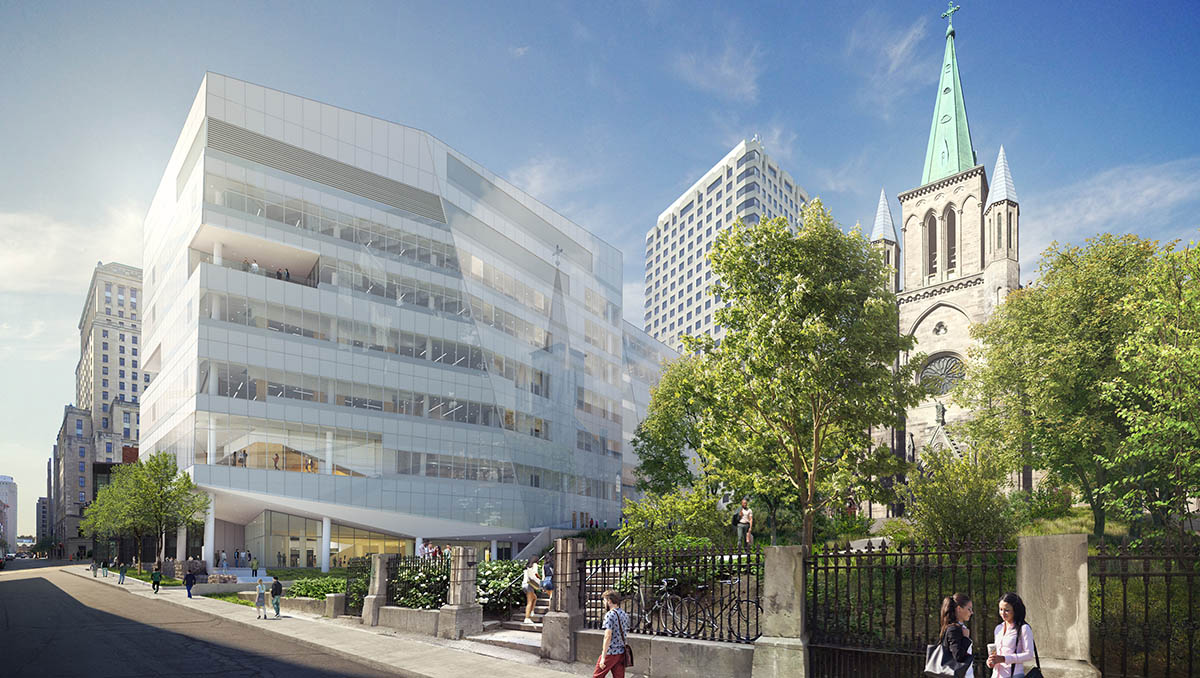 The project marks a move back to the downtown area where HEC Montréal began in 1906—and, where it can engage the city's economic players. It will also add much-needed capacity to the fast-growing school, whose student base has grown 64 per cent in recent years.

The new facility will house spaces for professional development courses, collaborative research into emerging areas like AI, and conferences, increasing capacity for the school while supporting partnerships with leading businesses in Montréal.

Conceived as a crossroads, the 24,000-square-meter facility is organized around two circulation axes that traverse the site and converge on a central skylit atrium that rises five floors. 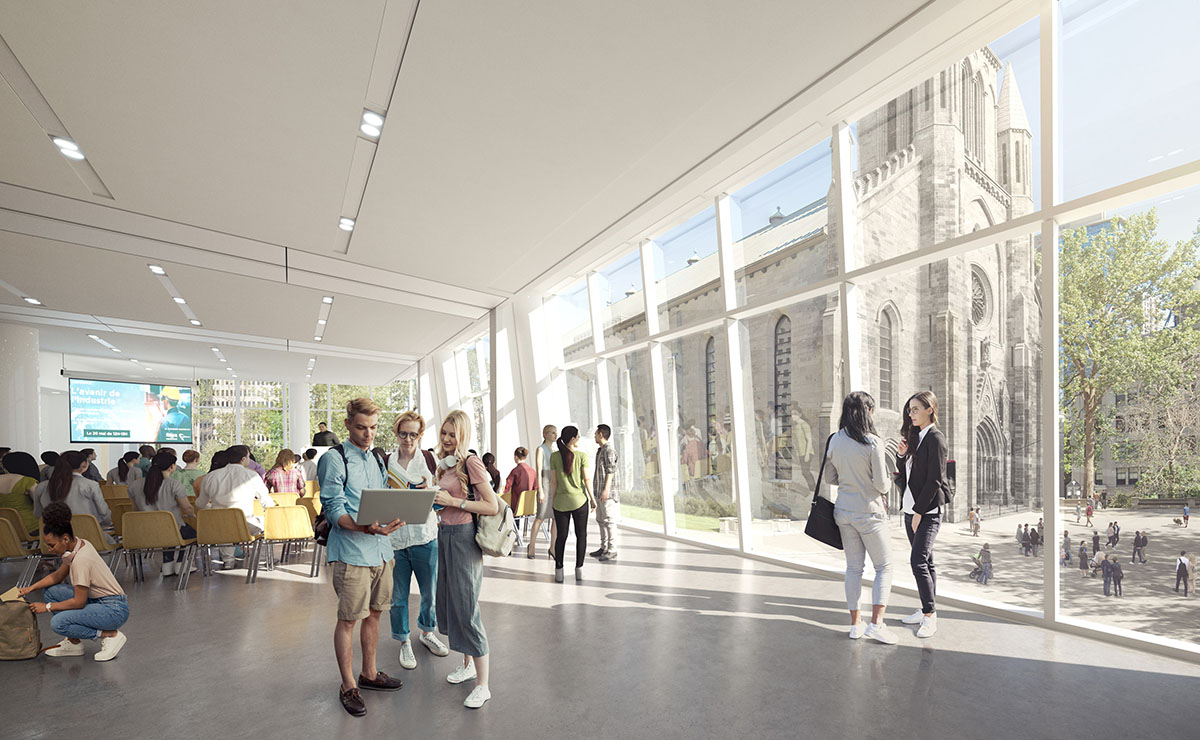 The design arises from the unique geographic and urban qualities of Montréal, embracing the characteristics of this city built on a mountain to create a building eminently of its place. Pedestrian connections through the building navigate an elevation change of 10 meters across the site, linking the streets on the east and west faces and the green spaces to the north and south.

Open and accessible from all sides, the building functions more like a neighbourhood in itself than a standalone structure. It forms a lynchpin in the historic urban fabric, interfacing with the surrounding business community to welcome students from around the world to the local business culture.

The design inserts a contemporary academic facility onto a site brimming with history, defining HEC Montréal’s presence in the city while paying homage to both the landmarked Saint Patrick's Basilica next door and the history of the grounds themselves.

Provencher_Roy's design scheme is shaped around three core principles: dynamism, lightness, and respect for the site. 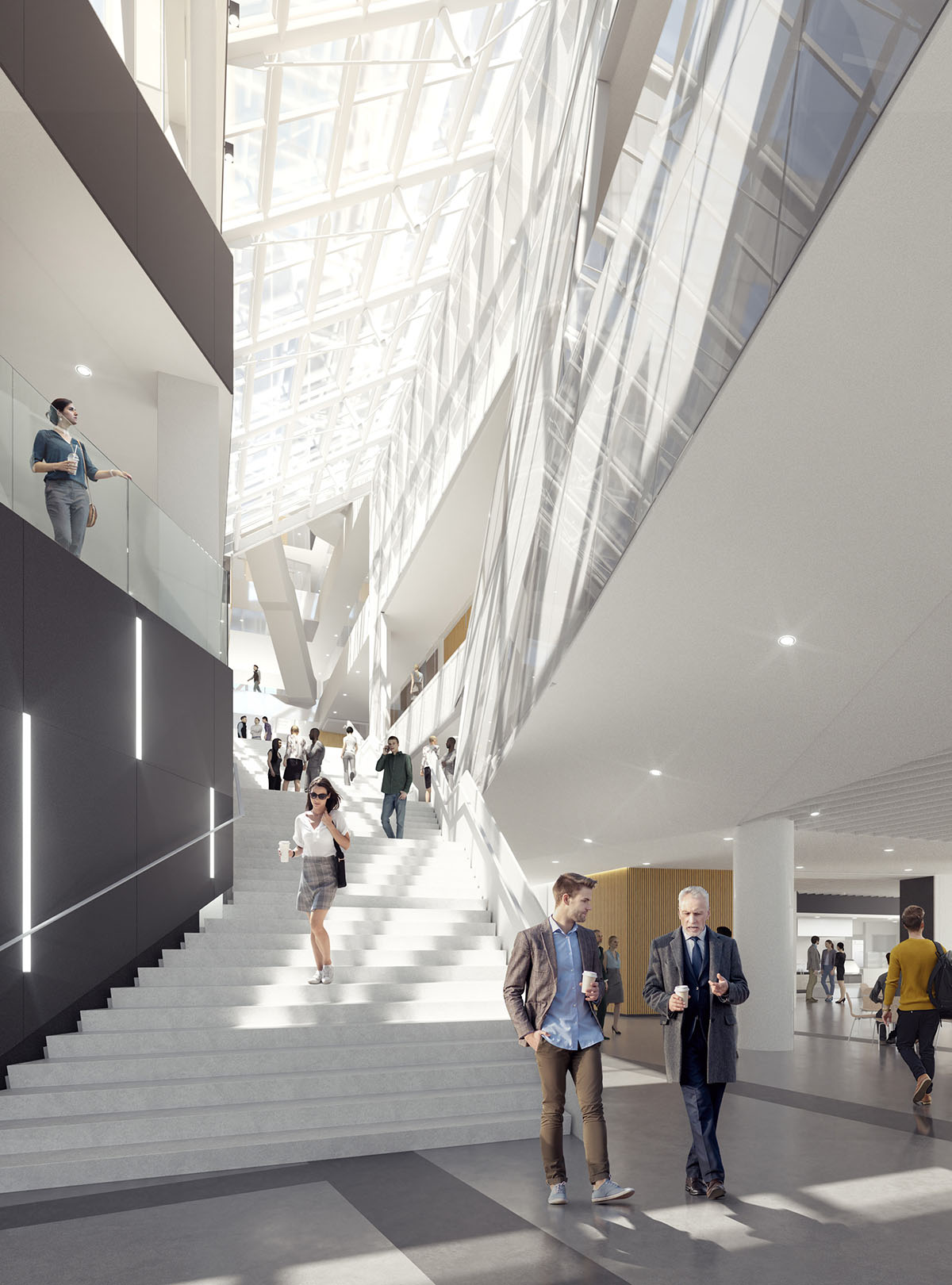 Now an undeveloped lot in the shadow of the basilica, the site was once home to St. Bridget's Refuge, a shelter for Irish women during the 1860s.

The new building preserves much of the greenspace, transforming it into a landscaped park that extends the forecourt of the basilica. The scheme also brings the history of the ruined St. Bridget's Refuge to the fore, retracing its foundation, partially rebuilding the remnants of its exterior walls, and dedicating several commemorative plaques.

The building's jewel-like façades and changing materialities respond to the different contexts surrounding the site. At the north-east wing, the facades incline away from the basilica, preserving views onto the historic structure from the surroundings.

This portion of the building is also shorter than the rest, deferring to the height of the basilica. Generous glazing on the lower floors of this facade creates sightlines from the interiors to the basilica and opens the new building to the surrounding plaza. 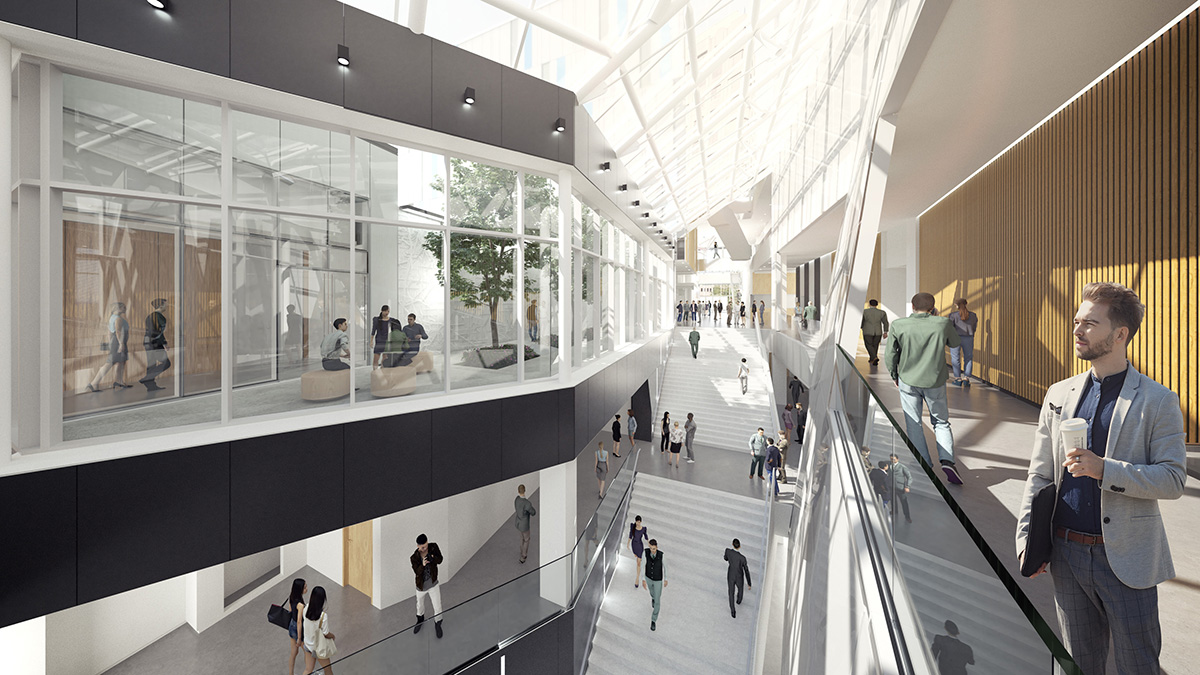 On the west side of the site, the design creates a dramatic entrance that announces the building on the bustling Rue De La Gauchetière. V-shaped walls carve out an entry court recessed from the lot line. Stacked masses extend over the entrance and protrude toward the street, creating a dynamic silhouette that matches the bustling urban context. The masses are punctuated by sheltered outdoor gathering areas that engage the city. A sky bridge links the two wings of the building above an existing brick structure.

Provencher_Roy developed the final design in collaboration with community members and stakeholders to ensure it paid due respect to the site's heritage and contributed to the surrounding urban fabric.

A series of consultations and co-design charrettes were held with public authorities, residents, heritage experts, and the business community, inviting these voices to contribute to the design. 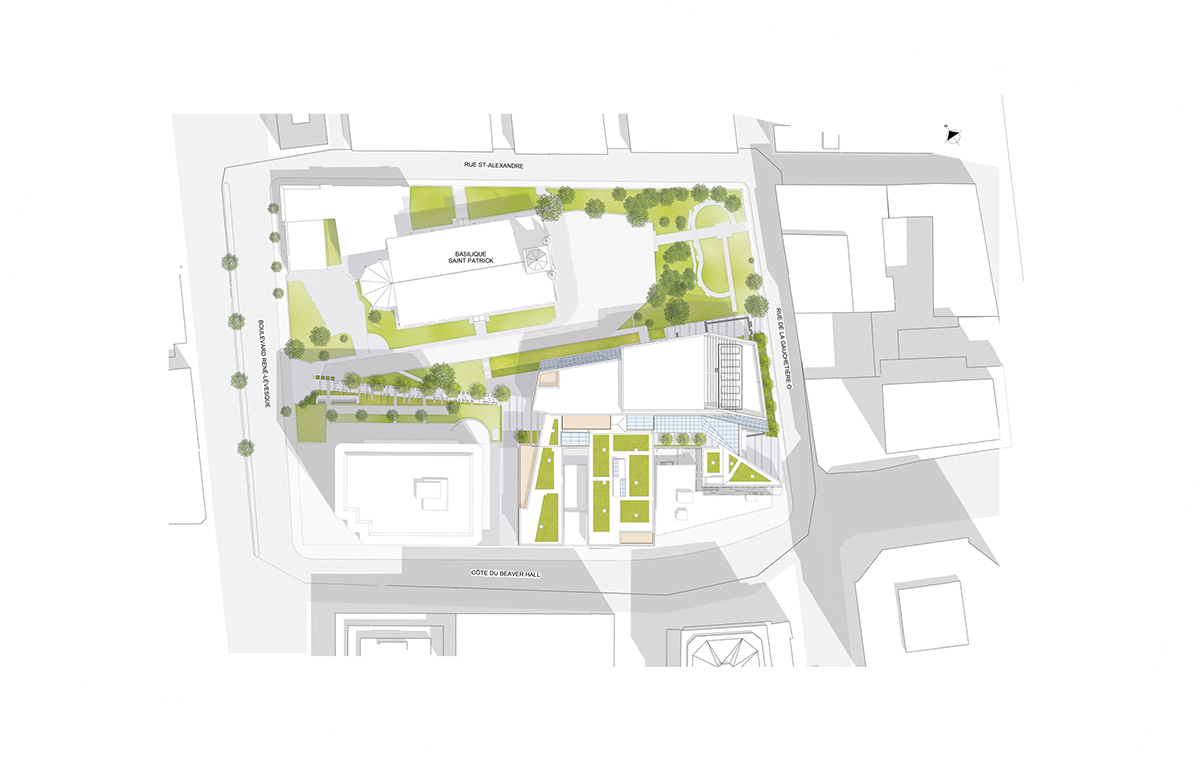 "The architects favoured a co-construction process. They organized workshops with the neighbourhood, businesspeople, and students," said Federico Pasin, Director of HEC Montréal.

"Together, they imagined what the ideal campus would look like. We wanted a living space, something spectacular. And we are extremely proud of the result."

Targeting LEED Gold, the centre will host 27 classrooms, a 300-seat auditorium, and a centre for events and lectures. Public amenities—including a library, lounge, cafe, interior garden, and courtyard—integrate the building with the city and offer new community spaces. The lower levels house the meeting and gathering functions and are easily accessible from the three main entrances. Above are the floors with the classrooms, a program stack that concentrates activity at the base to animate the site. The upper levels house meeting rooms, classrooms, and administrative offices of the Executive Education department. The northwest wing of the building houses a research centre where business leaders and top academics can collaborate on emerging technologies like artificial intelligence. 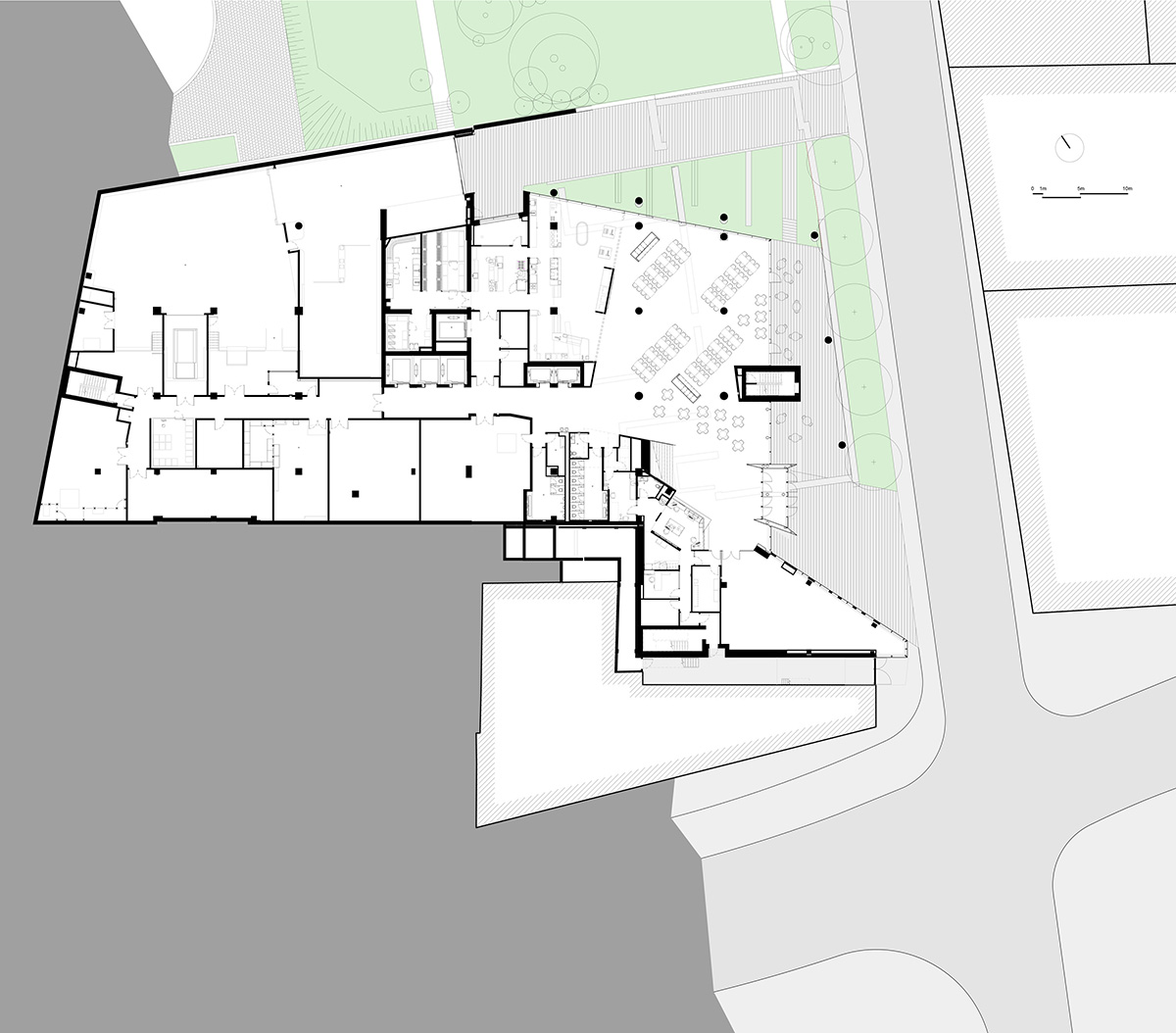 Throughout, the building integrates the latest technologies, facilitating relations between academics and researchers from around the world. The design furthers HEC Montréal's vision to be a network of establishments for learning, research and dialogue between students, professors, staff and the business community that fosters immersive and interactive experiences. 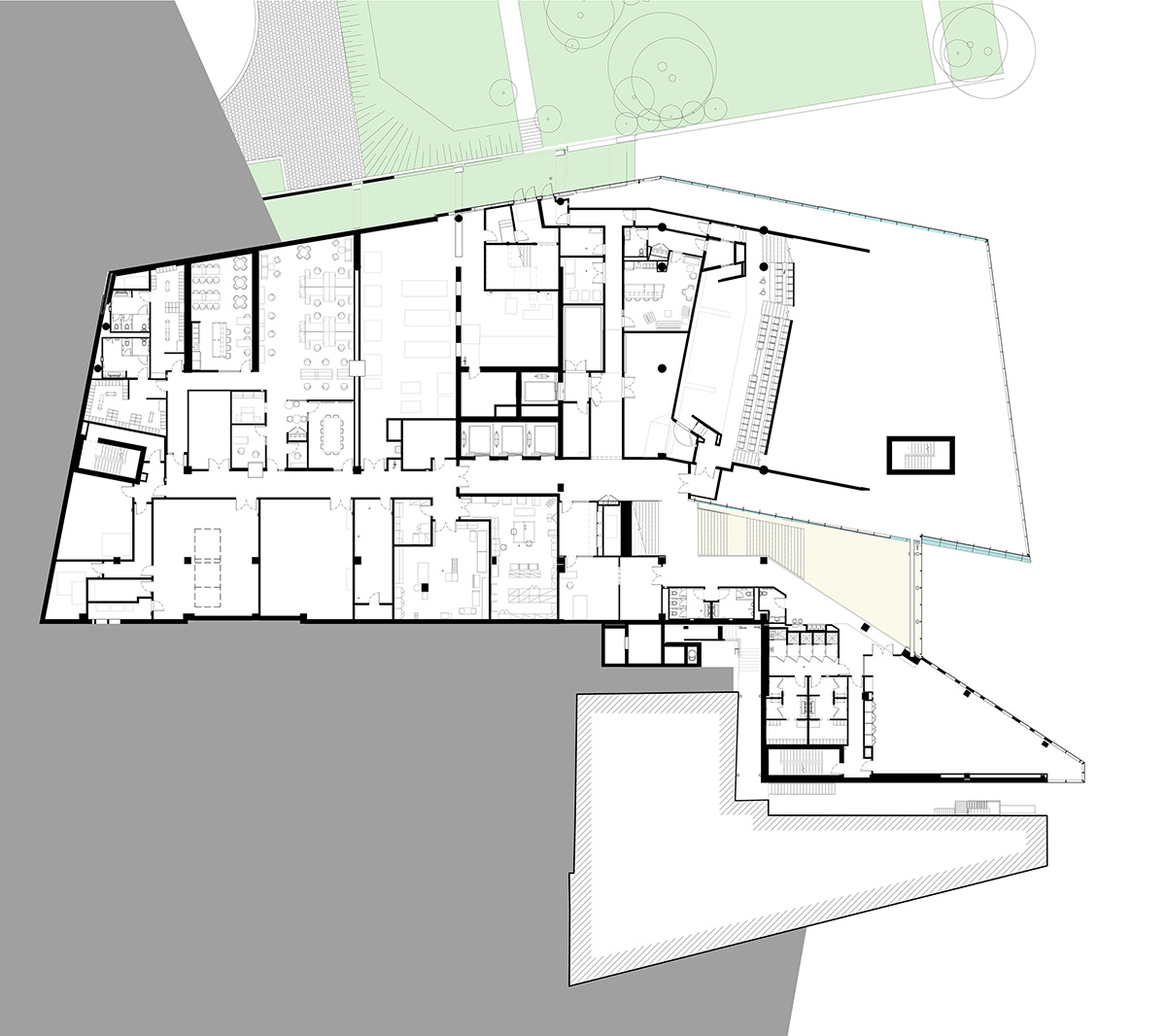 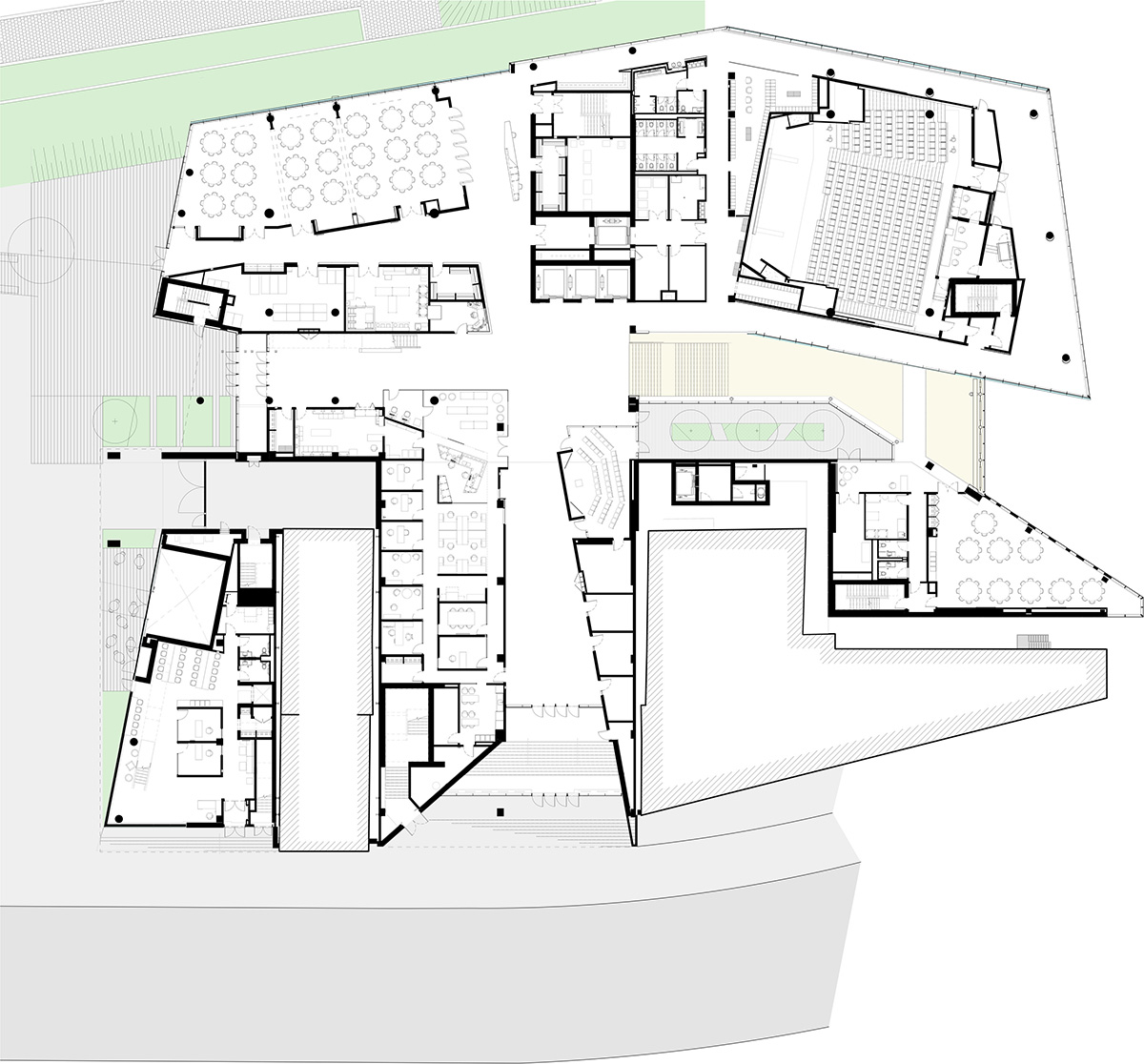 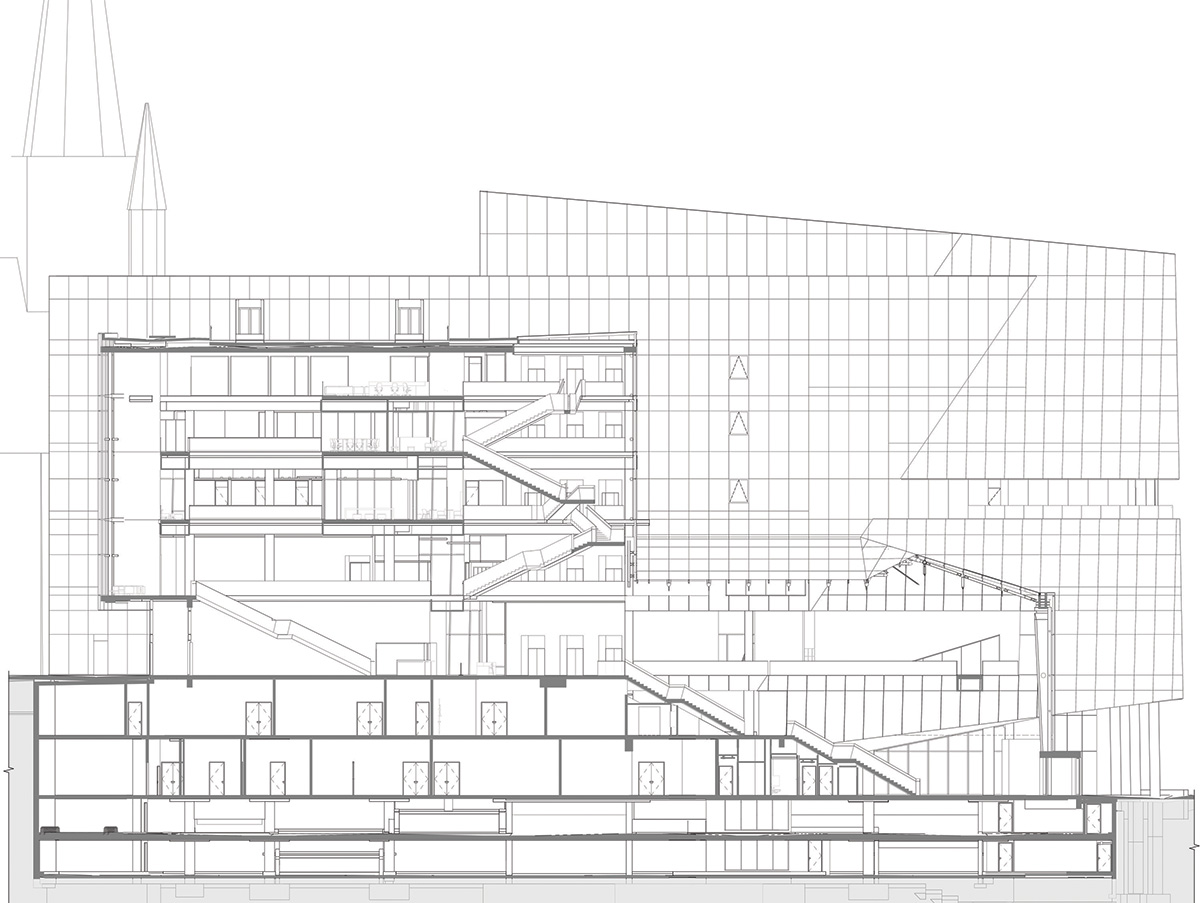 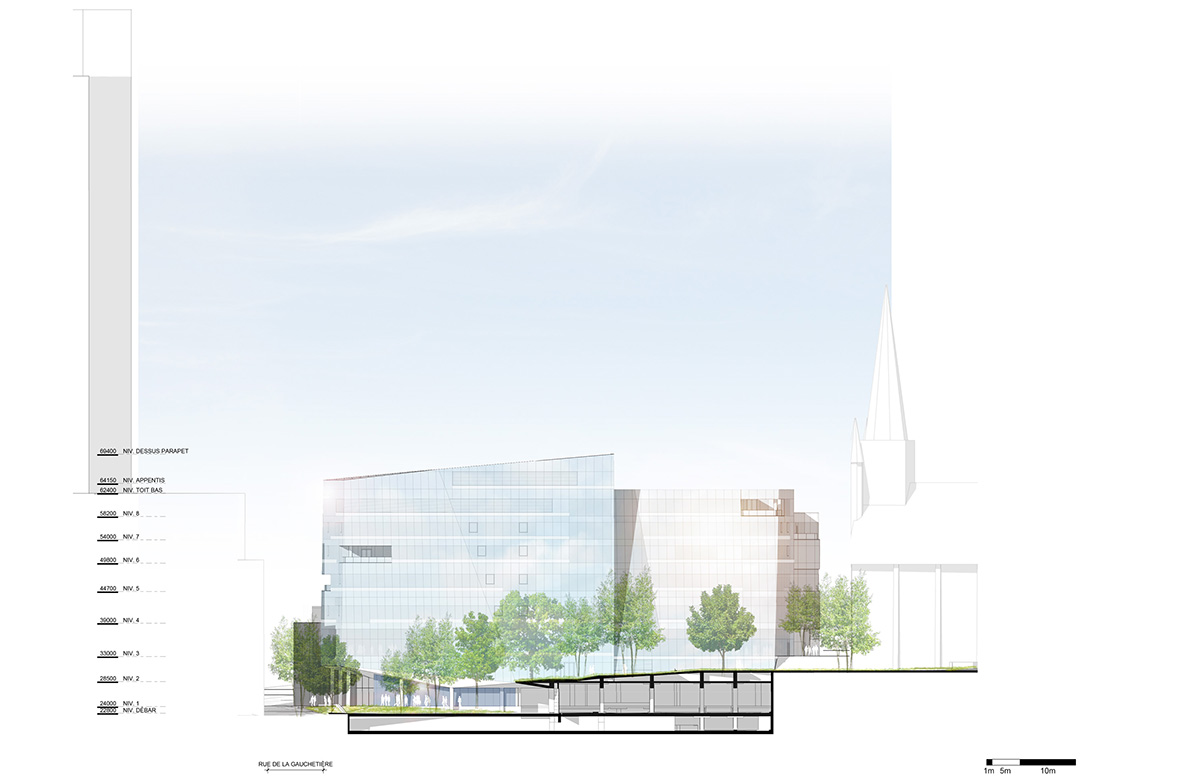 The building is scheduled to open in 2022.

All images courtesy of Provencher_Roy.