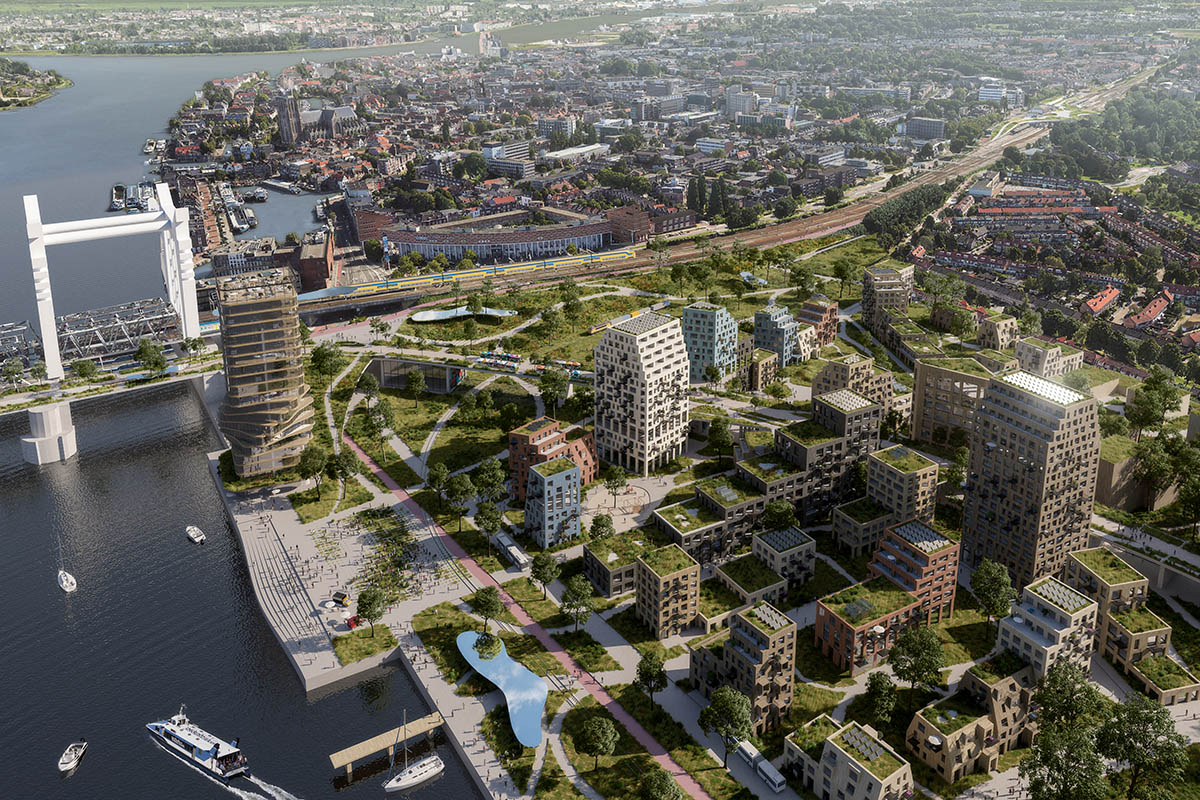 Dutch practice Mecanoo has presented a vision to transform the Spoorzone Dordrecht railway zone in the Netherlands into a 6,000-home development including commercial spaces, amenities, parks and stations.

Dubbed as Spoorzone Dordrecht, the vision comprises the development of areas Maasterras, Spuiboulevard, station area Dordrecht Central, Leerpark (Learning Park) and Health Park, which will outline a future picture of the city in 2040.

"Dordrecht is a city with an extensive history and was the first city of Holland to receive city rights in 1220," said Mecanoo.

"Beautifully situated in the heart of nature found in the Dutch Delta, Dordrecht is also a city of innovation, trade, maritime industry and culture. Both the city and the region are growing and are facing major spatial challenges." 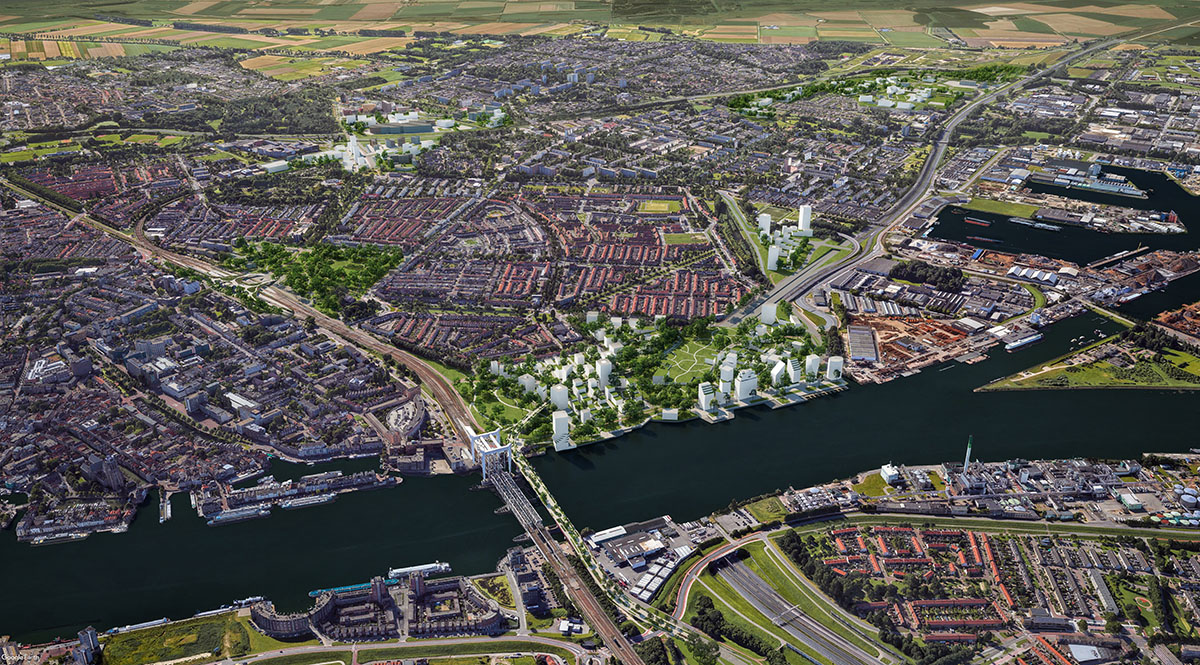 According to the practice, the area represents spatial opportunities for the city in the fields of accessibility, climate adaptation, socio-economic developments and the major challenge of housing.

Although the rail infrastructure does not seem to be the most obvious place for the development assignment of approximately 6,000 homes and facilities, the infrastructure currently constitutes a barrier in the city with noise and safety challenges arising from freight transport, as Mecanoo states.

Mecanoo's vision will transform the railway into a pleasant destination and connects existing neighbourhoods to new city districts with spectacular green areas. 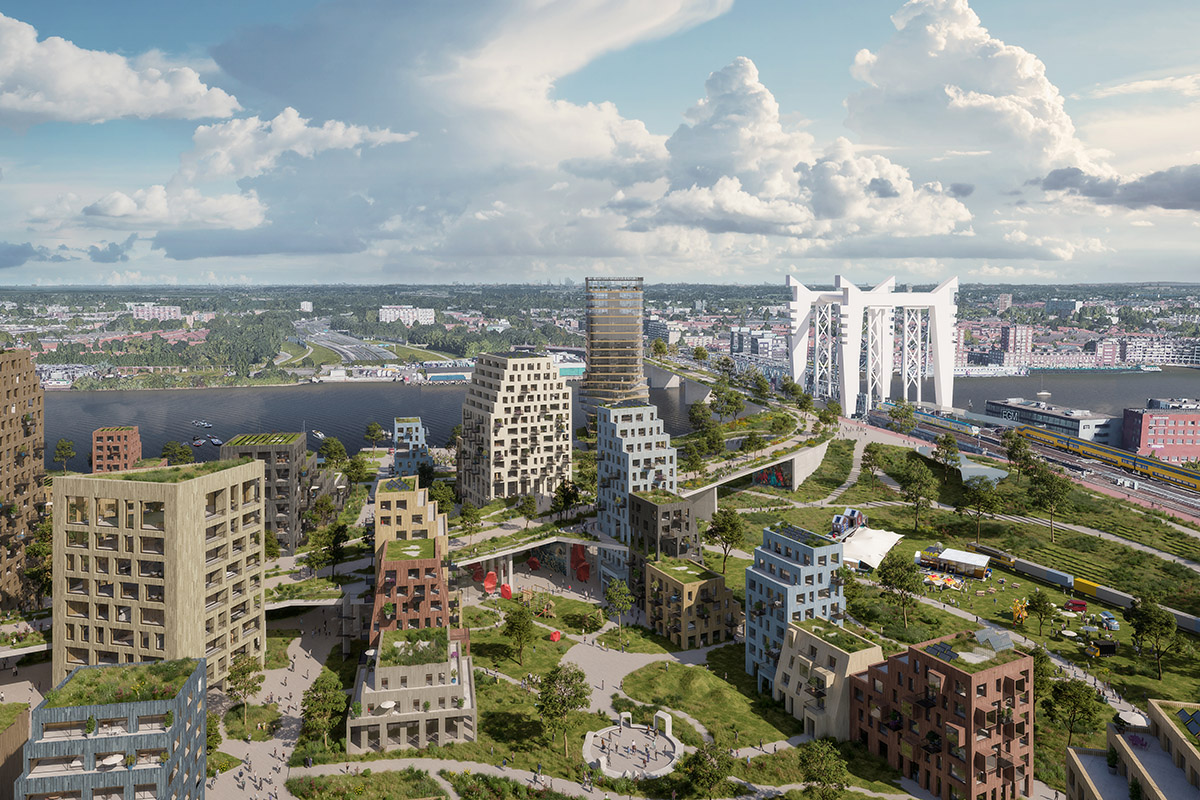 The area around the railway will easily accessible and will within close vicinity to amenities, the historic city centre, the river and the countryside.

The vision builds on the beauty of the oldest city in Holland, the nature of the Dutch Delta, but also raw elements such as infrastructure, railways and industry. Places that are loved and places that are disliked will form an attractively coherent whole in 2040.

Residential areas will entirely be built from wood

In masterplan, the Stadsbrug transforms from a motorway into a high-level green city park. Here you can walk and cycle between the new residential buildings along the river front with a view of the Oude Maas river and the city.

The green estate of Weizigtpark connects across the railway, enabling access into the city centre through the greenery. Dordrecht Central Station will be the greenest station in the Netherlands and on the Oude Maas river people will live 'with their feet on the water' in a car-free neighbourhood. 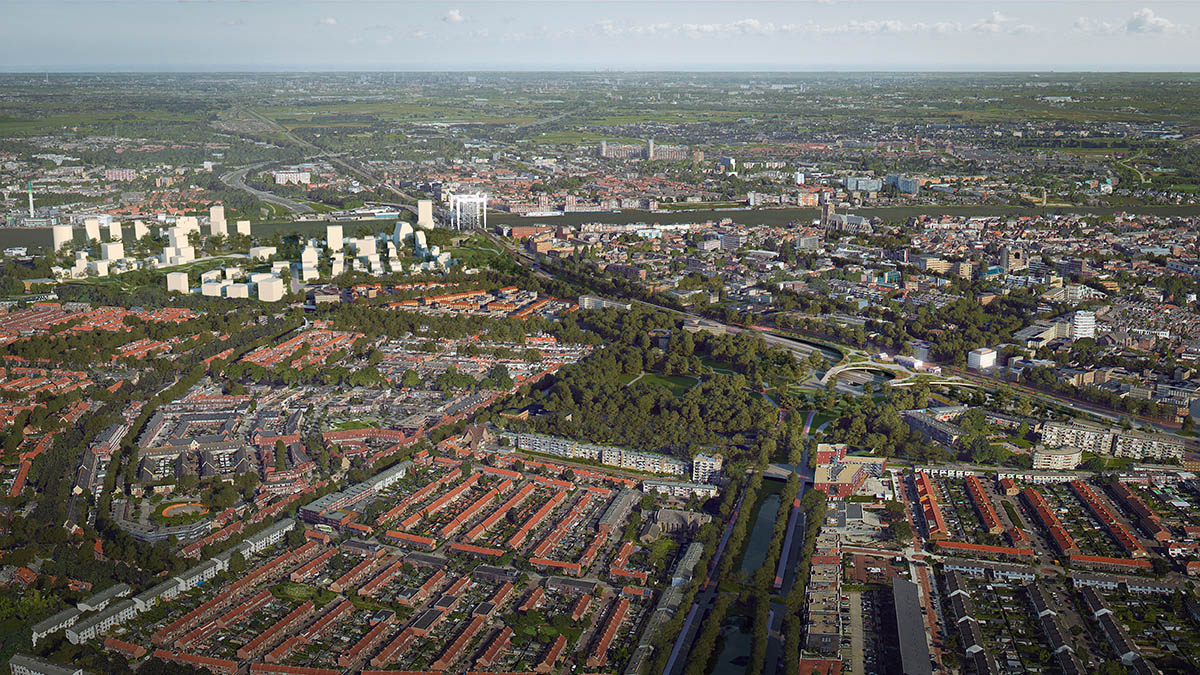 Families and residents will be first-time-buyers and they will be able to find a home close to work, amenities, culture, with good accessibility by rail and water. The new residential areas will be built entirely from wood sourced from production forests on the island.

"This is one of the examples of strengthening a local and sustainable economy," added Mecanoo.

"The Health Park and the Learning Park will become an environment where education, innovation and good care further reinforce each other." 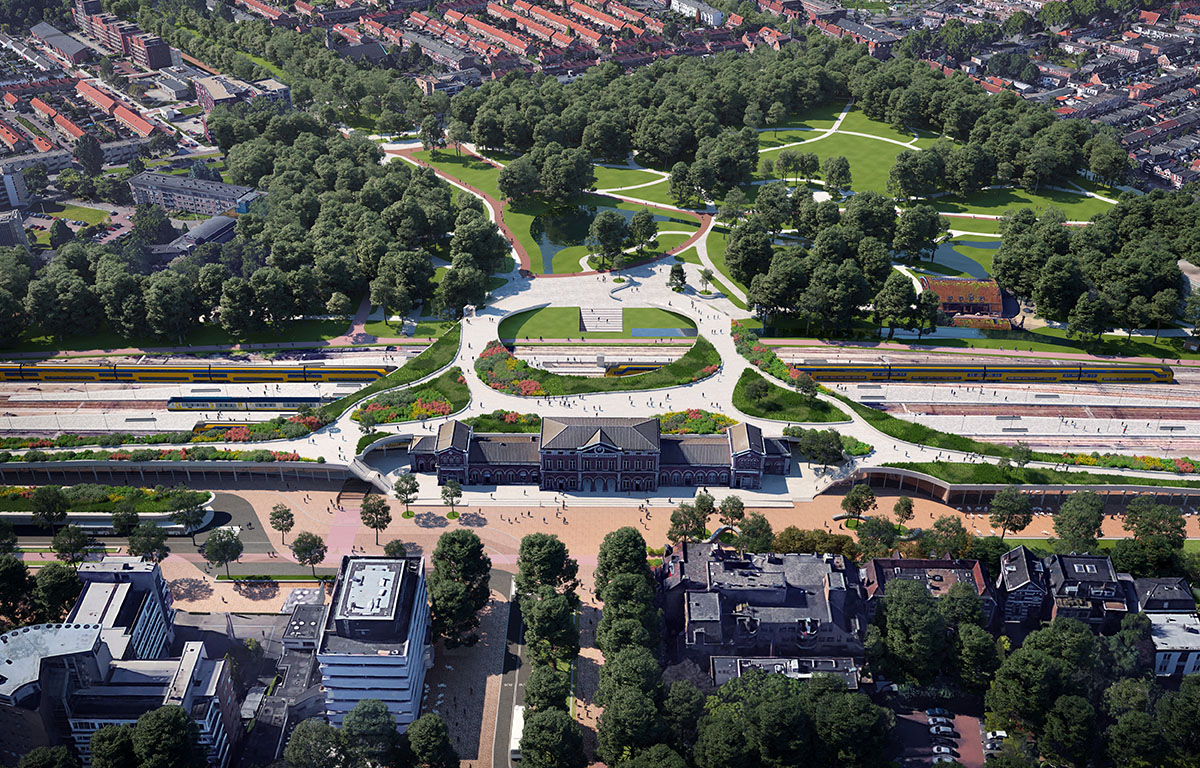 In 2040, the railway will no longer form a barrier in the city, but will become a place to stay, a place of connectivity with space for new developments. Dordrecht will be known as a city of wood, of trade and innovation, the symbiosis of nature and urban development, water, events, sports, cycling and walking.

A city that shows how we can resolve the major challenges of our time. Spoorzone Dordrecht will be the guiding principle for the development of the city in the coming years. 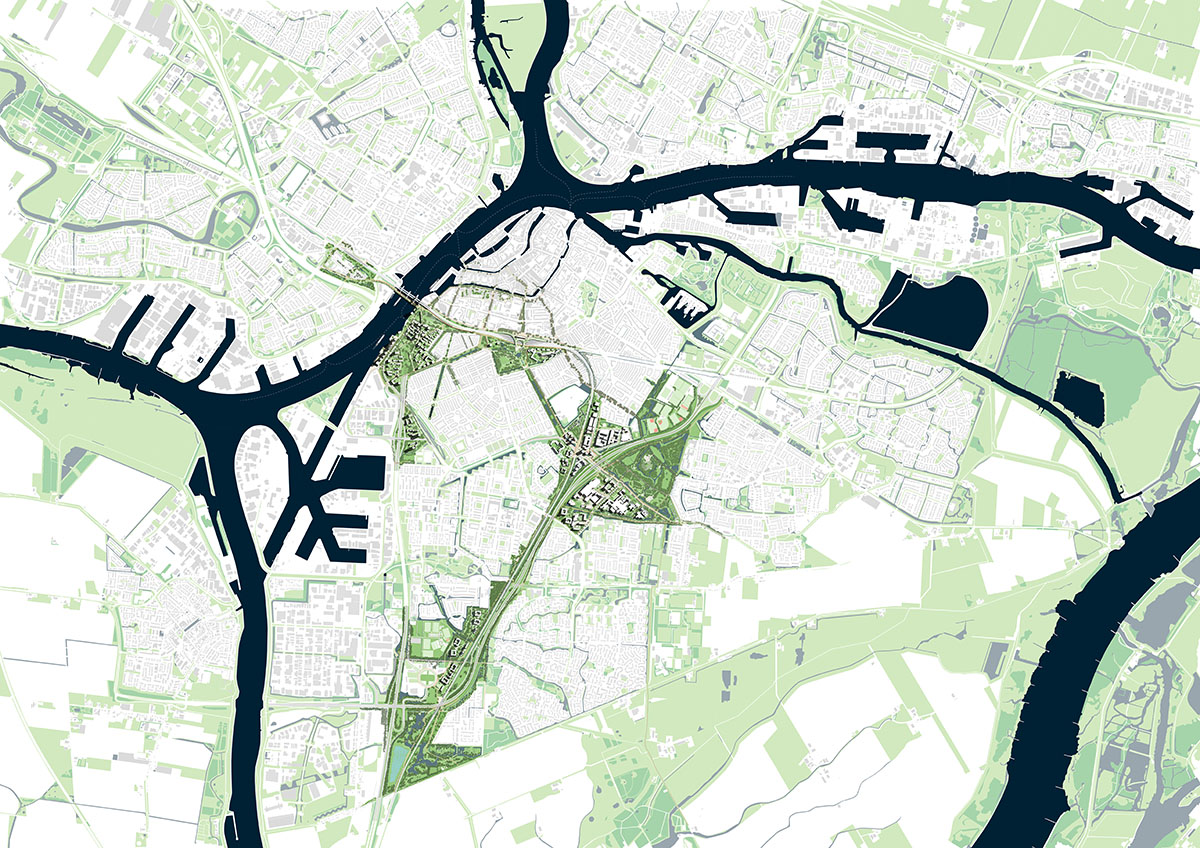 A development that consists of many stakeholders, such as the residents, the province, NS (Netherlands Railway Company), ProRail, Rijkswaterstaat (Ministry of Infrastructure and Water Management), developers and knowledge institutions.

Mecanoo was founded by Francine Houben in 1984. The studio's portfolio includes projects in various sizes, types and scales in The Netherlands and abroad.

Mecanoo recently completed the transformation of the Martin Luther King Jr. Memorial Library in Washington D.C., the National Kaohsiung Centre for the Arts in Taiwan and a villa in the Dutch countryside near Vught, the Netherlands.

Based in The Netherlands, Mecanoo has offices in New York and Asia.