ABRIGO: A Sheltering Space Fosters A Dialogue With Its Surroundings ABRIGO -"shelter" in Portuguese, by the architectural team of FAHR 021.3 comprised by Filipa Frois Almeida and Hugo Reis, is a simple structure, sculptural yet useful;  one that provides an unobtrusive sense of movement while creating a framing station to the body of water it faces and to the landscape beyond, fostering a dialogue with its surroundings and with the activities that take place around it. 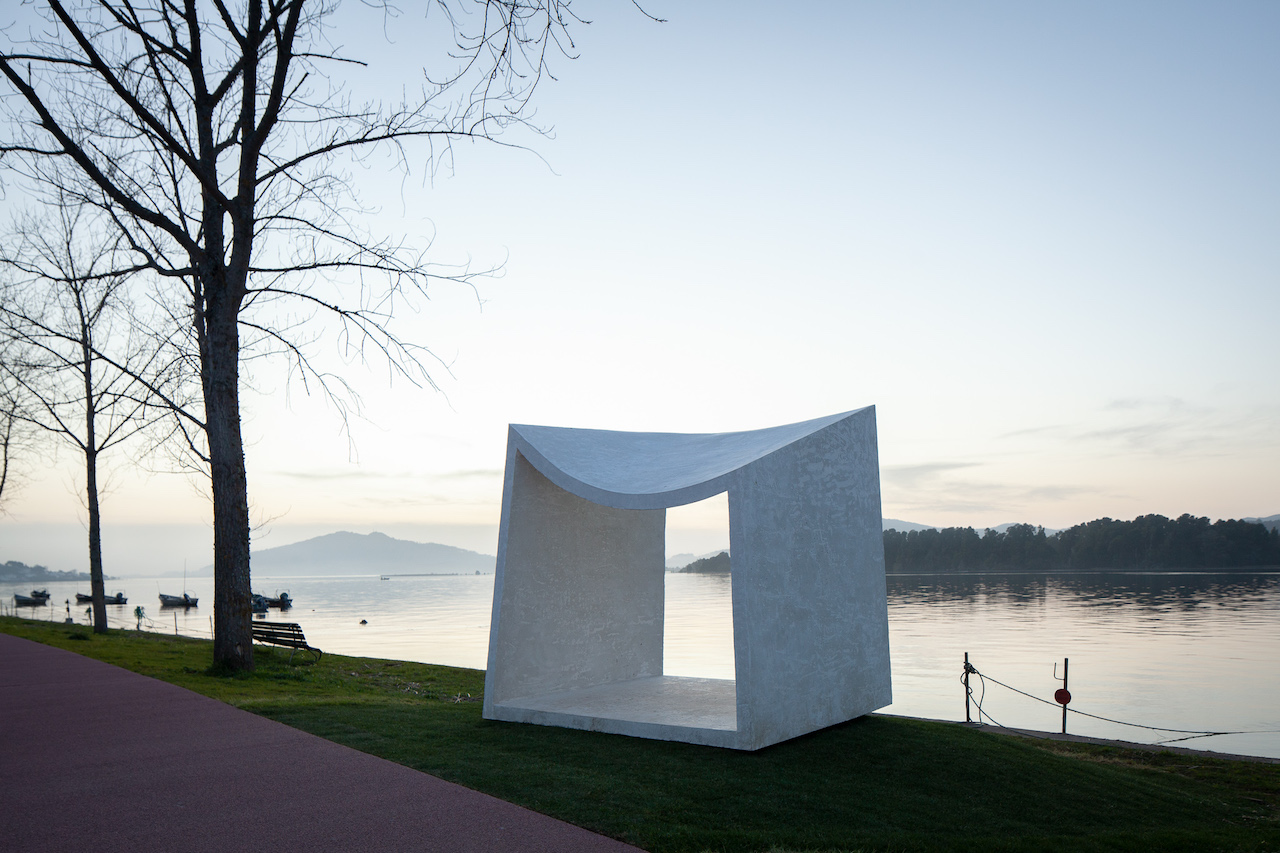 The piece was developed as part of an ensemble of 10 landscape interventions by DESENCAMINHARTE 2018, a collective initiative that aims to promote artistic creativity in the region of Alto Minho in northern Portugal and which was featured previously in WAC, but while the first feature was set on the mountains area, this one sits down on the left bank of Minho river which flows along 300 km until it reaches Caminha municipality. The natural border between Portugal and Spain lies between a neighbouring village and the mouth of the river1. The site of ABRIGO sits on the banks of the river, in the parish of Lanhelas in Caminha. An under-the-radar destination in far north-west of Portugal with strong, long-standing connection to the river; economic and otherwise. 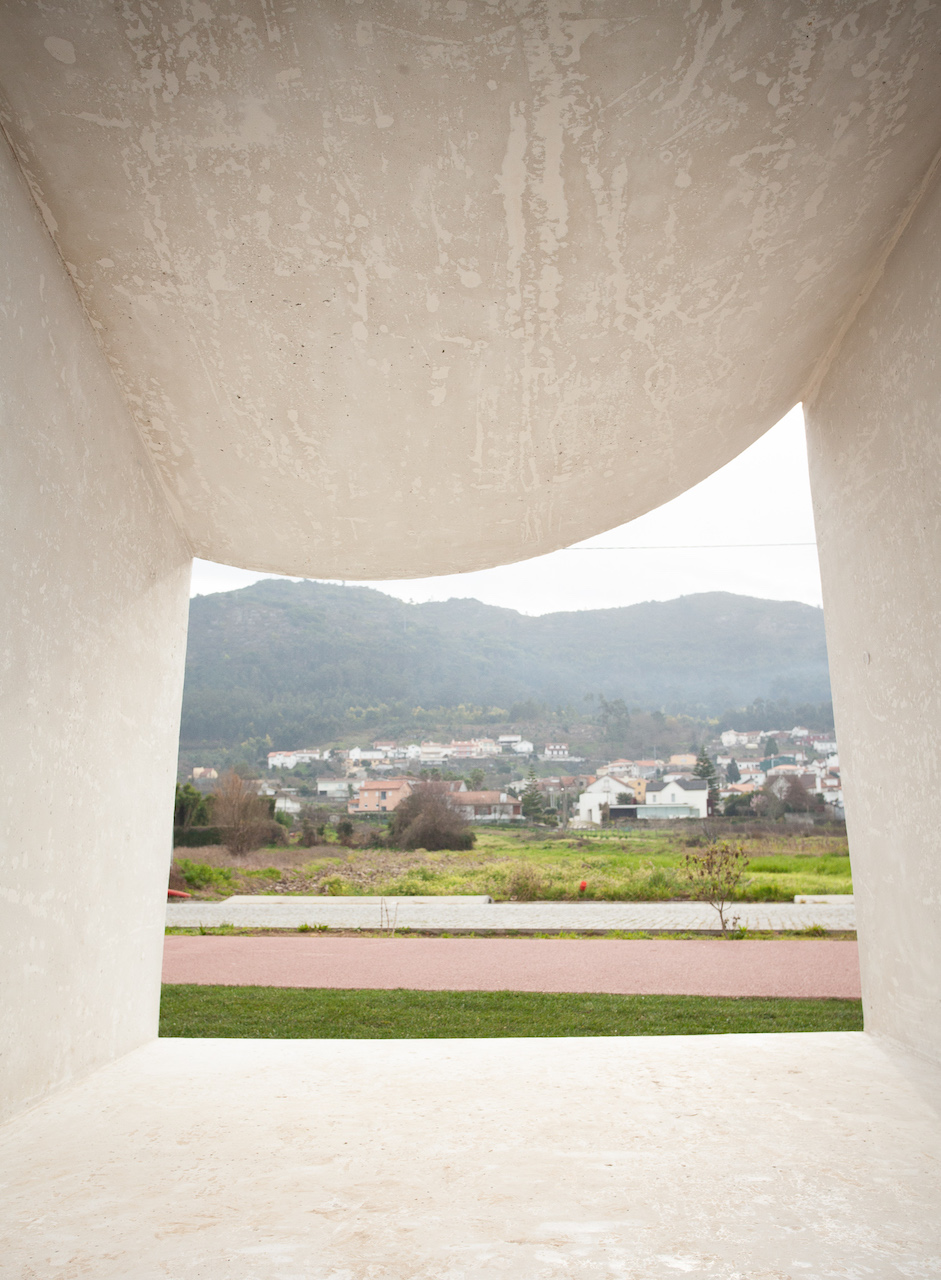 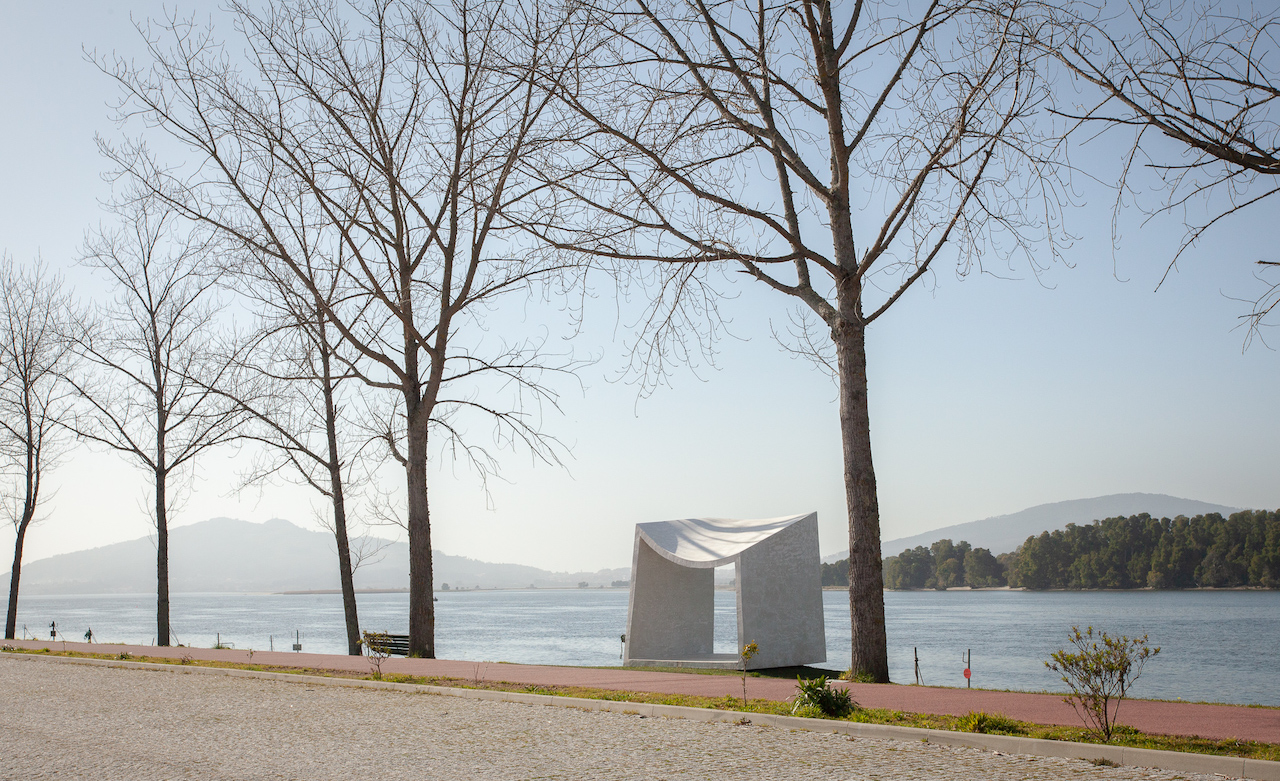 When observing the marks of time and the various strata of this pristine landscape it entices us to slow down, to stop and take this all in. Approaching the water surrounded by tall poplars and green fields is a boost to the senses; leaving us to immerse ourselves in this beautiful, soothing view of the river and beyond. A place where time seems to stop and renders itself as a perfect spot for deep thought and solitude, in harmony with the natural setting. No wonder this is a favourite place for those looking for a place to go for a stroll, a bike ride or a run through the eco-track, enjoy a picnic or engage in professional or recreational fishing. 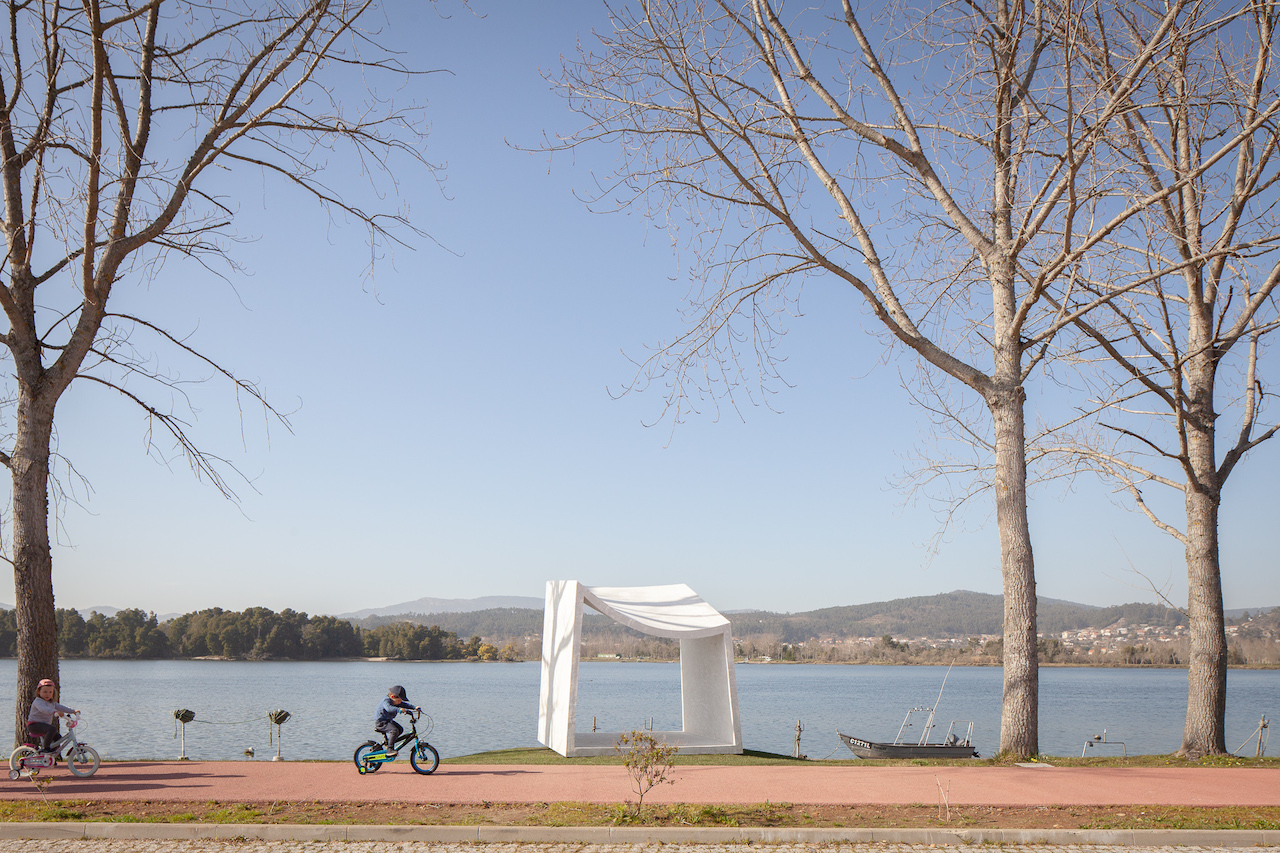 The FAHR 021.3 team decided to place their piece riverfront where they felt this white concrete structure would become part of this domain, and opening to both the river and the woods fill in the landscape, joining in the wait for those going back and to claim the waterfront referencing, while doing this, both the fishing shacks and the granite houses up inland where Lanhelas extends in a cluster of granite houses, the architects speak fondly of some beautiful buildings there, however it is the riverside area that locals feels most proud of; they have deep, cherished memories and traditions that form part of their identity -the iconic "Carocho" boats for example, as emblematic of the Minho River landscape as they are a means of transport and which ABRIGO's roof resembles. 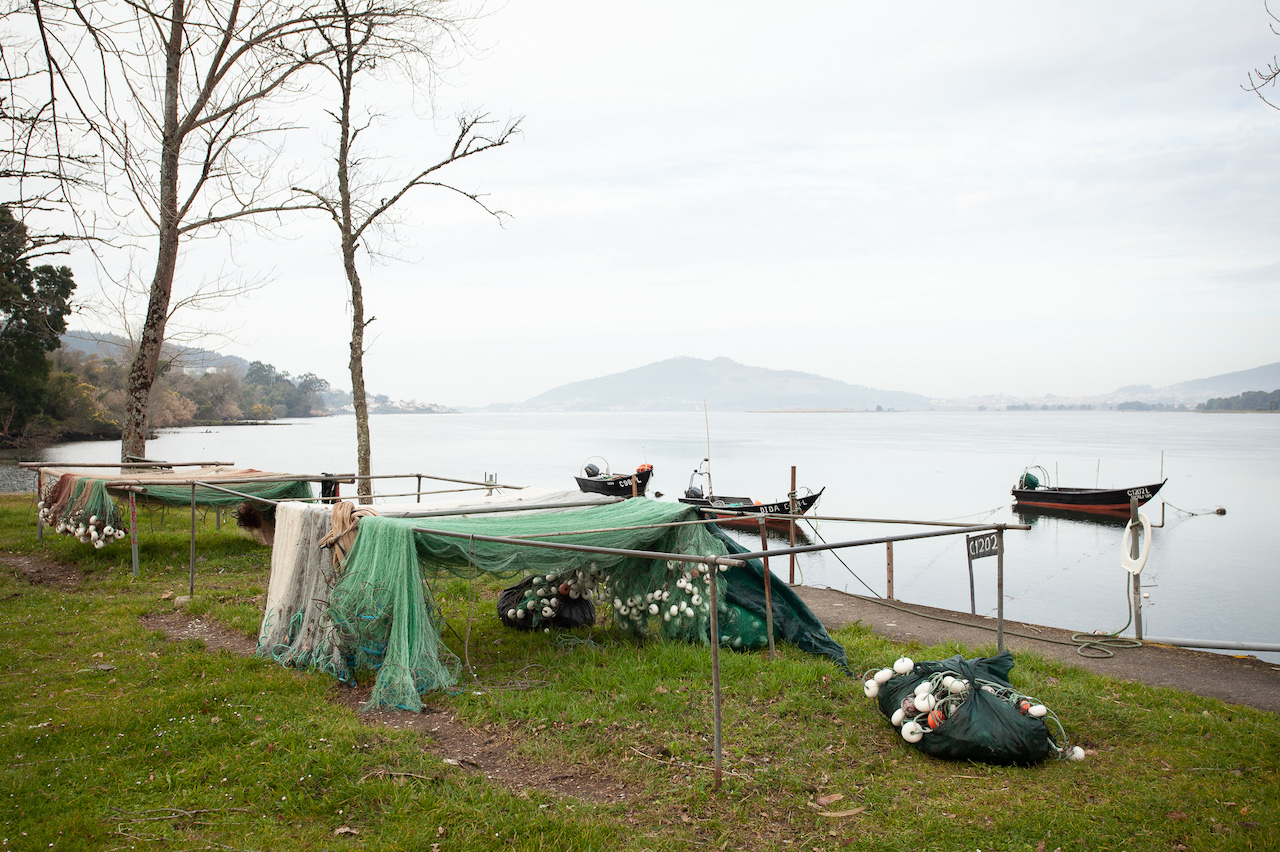 The architects wanted to create a piece that would be less of an intervention and more becoming with the riverside a  formal -a true shelter, yet contextual in its relationship to its surroundings and part of the local lore. The architects recognised a set of very particular elements that form the locals' identity that gave them the idea for ABRIGO -this shelter. As anyone walking along the river would notice, along with the boats nets and moorings there are groups of structures -fishing shacks really. These small shacks that are used to store fishing equipment, occupy among the trees a good part of the riverfront and are built in harmonious group arrangements the give one the impression that they are expecting the fishermen's return to welcome them and allow them to sit and clean the day's bounty sheltered therein. 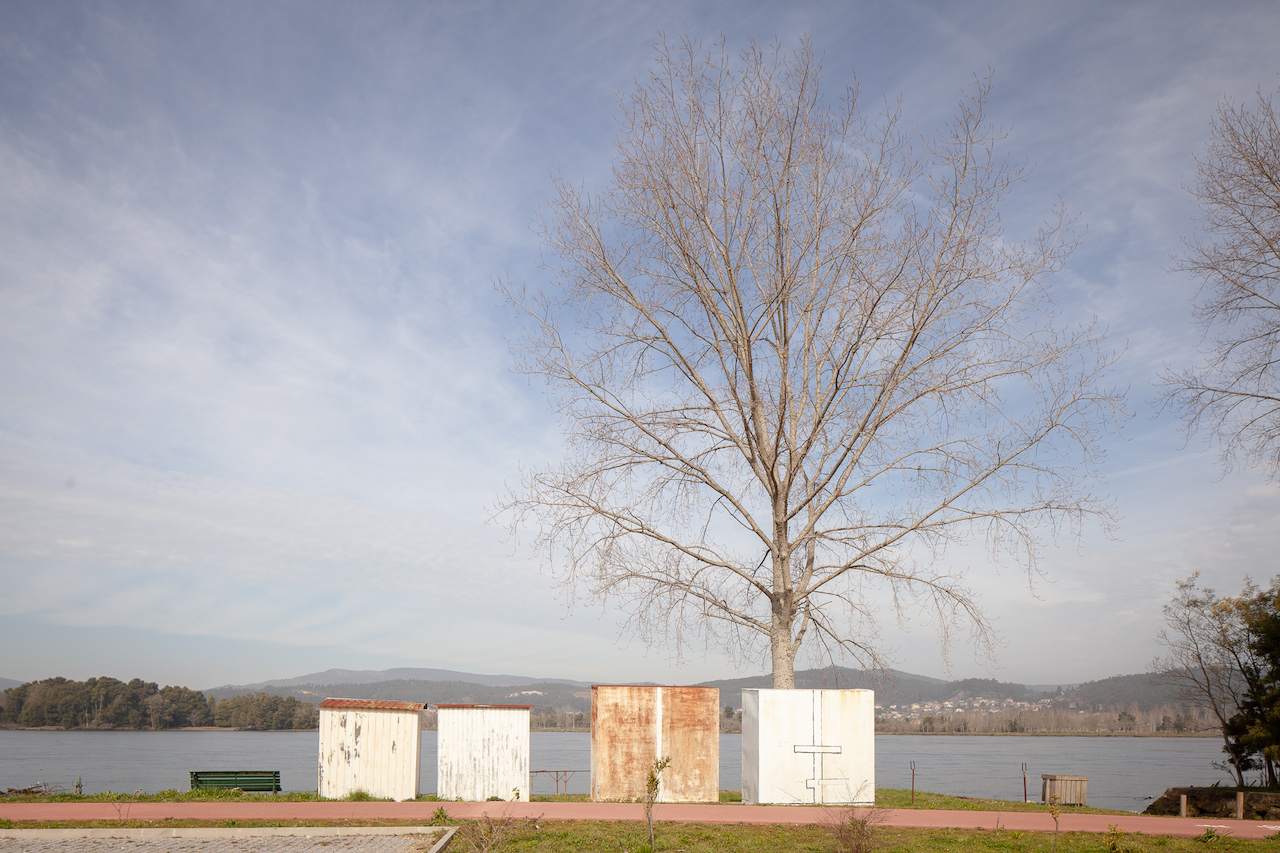 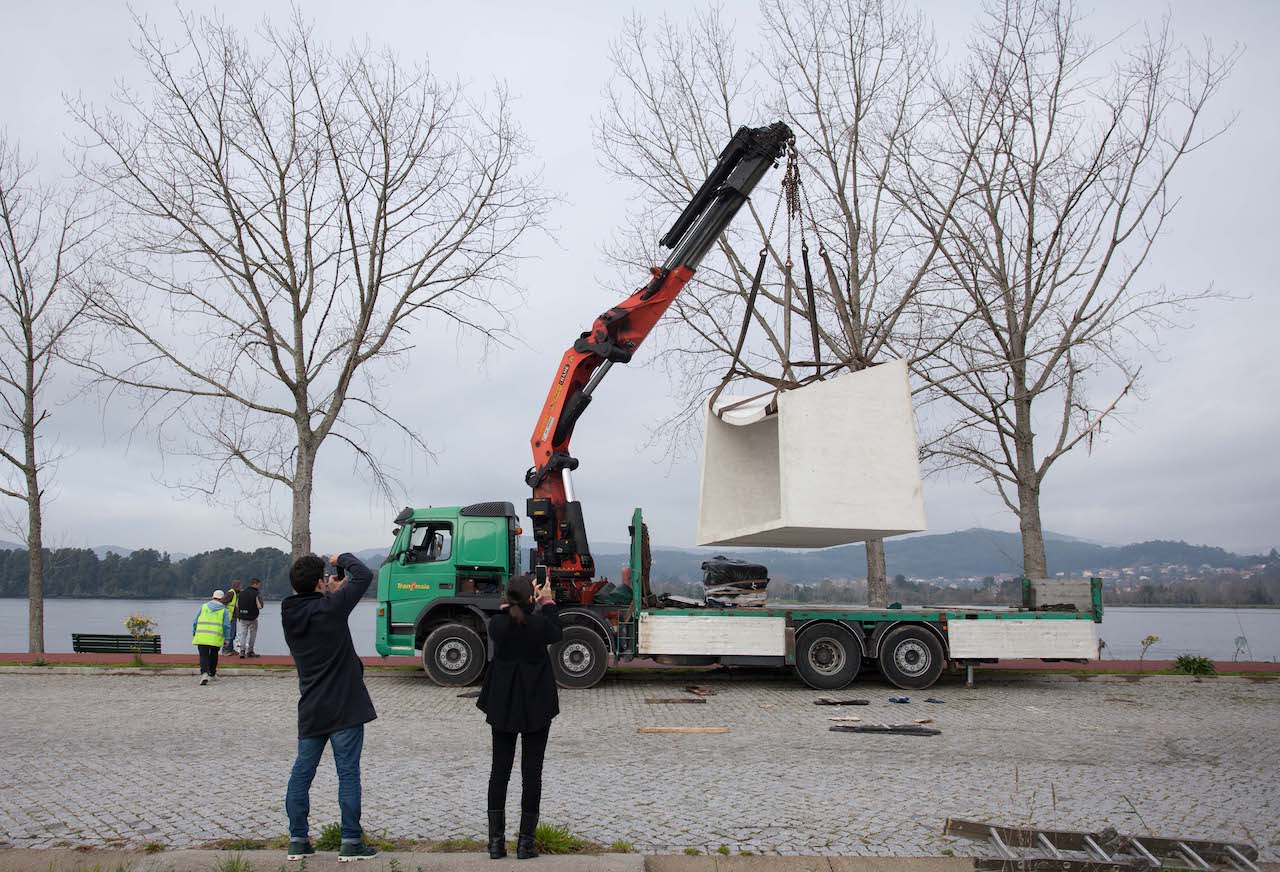 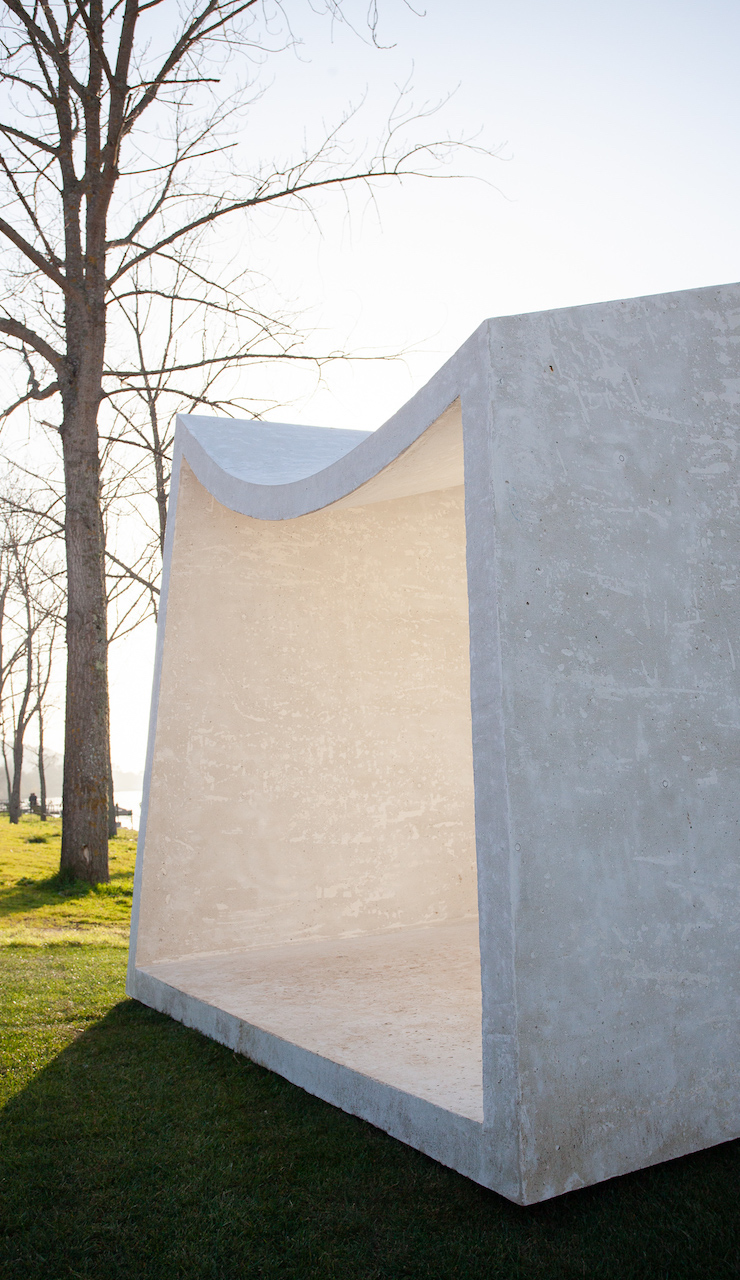 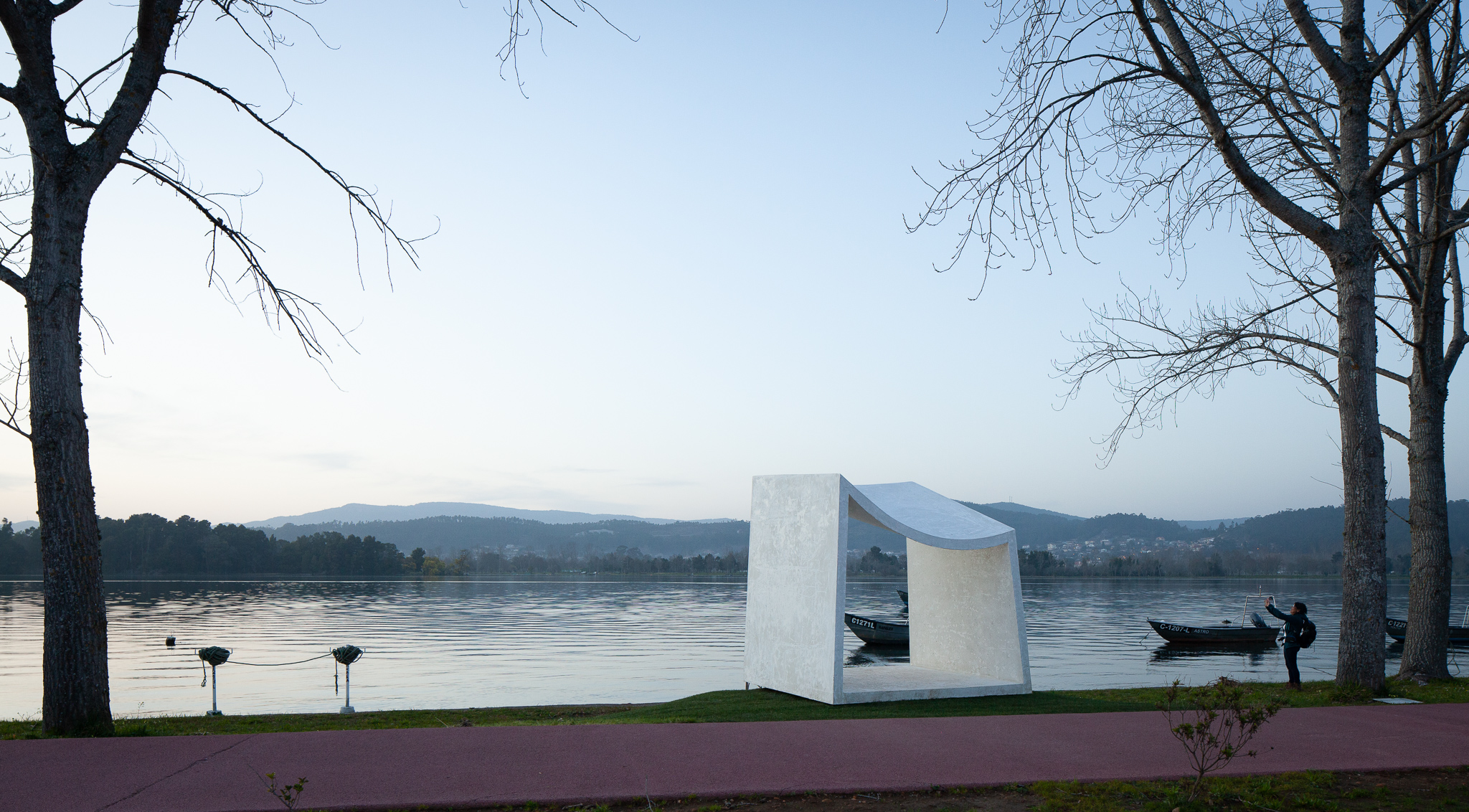 Judging by the attitude of the fishermen, so proud of their own makeshift structures and the community, that actually welcomed the idea of the architects' proposal as another part of their landscape, FAHR 021.3 seemed to have achieve their objective; the new structure has become a contemplation station, a frame that shapes as it harbours its domain on the river, becoming part of this natural environment with the same peaceful languidness we experience that.

1The Portuguese-Spanish border stretches from the lower portion of the Minho river to the north, finishing in the Atlantic Ocean. At 1214 Km. it is one of the oldest borders in Europe.