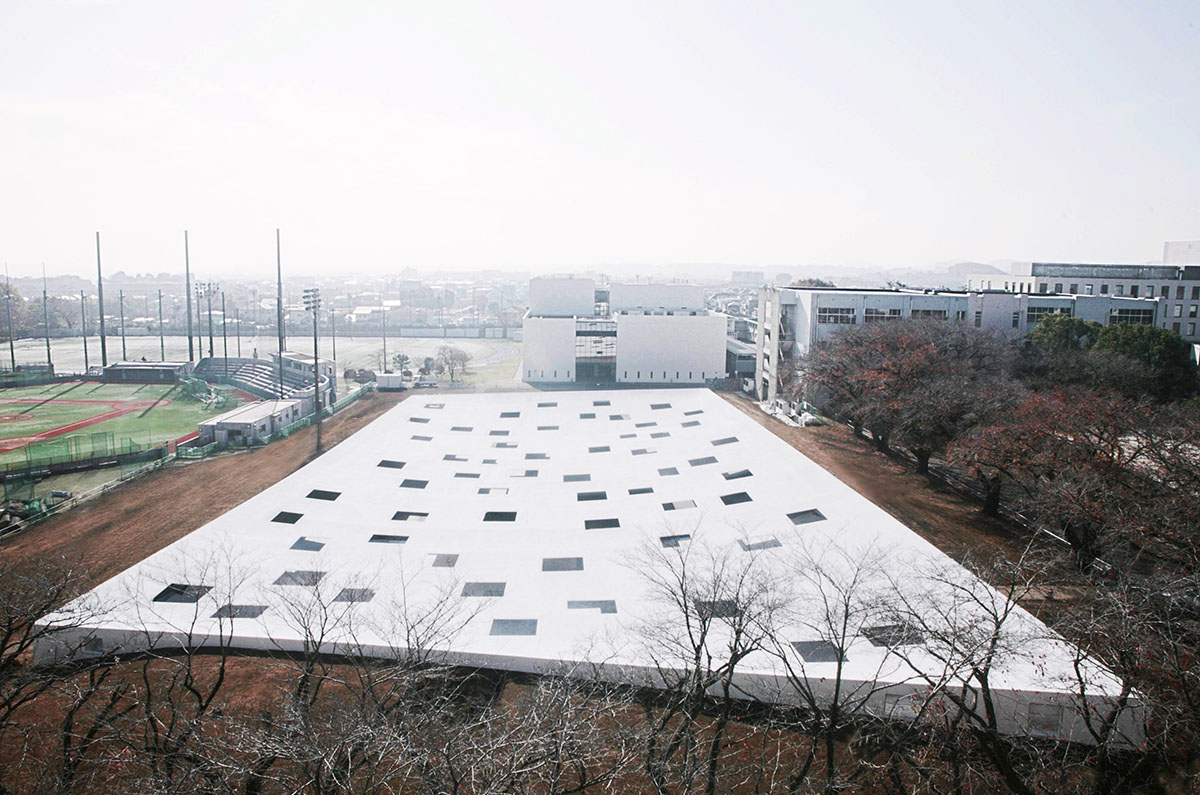 The new building, named Plaza of Kanagawa Institute of Technology, covers a total of 4,100-square-metre area and situated on the corner of the campus, east of the KAIT Workshop that Junya Ishigami completed in 2008.

For this project, the two key design principles play an important role in design process: "versatility" and "semi-outdoor". Ishigami tackles the issue of being "versatile" from an experiential point of view rather than simply creating the realization of the program. 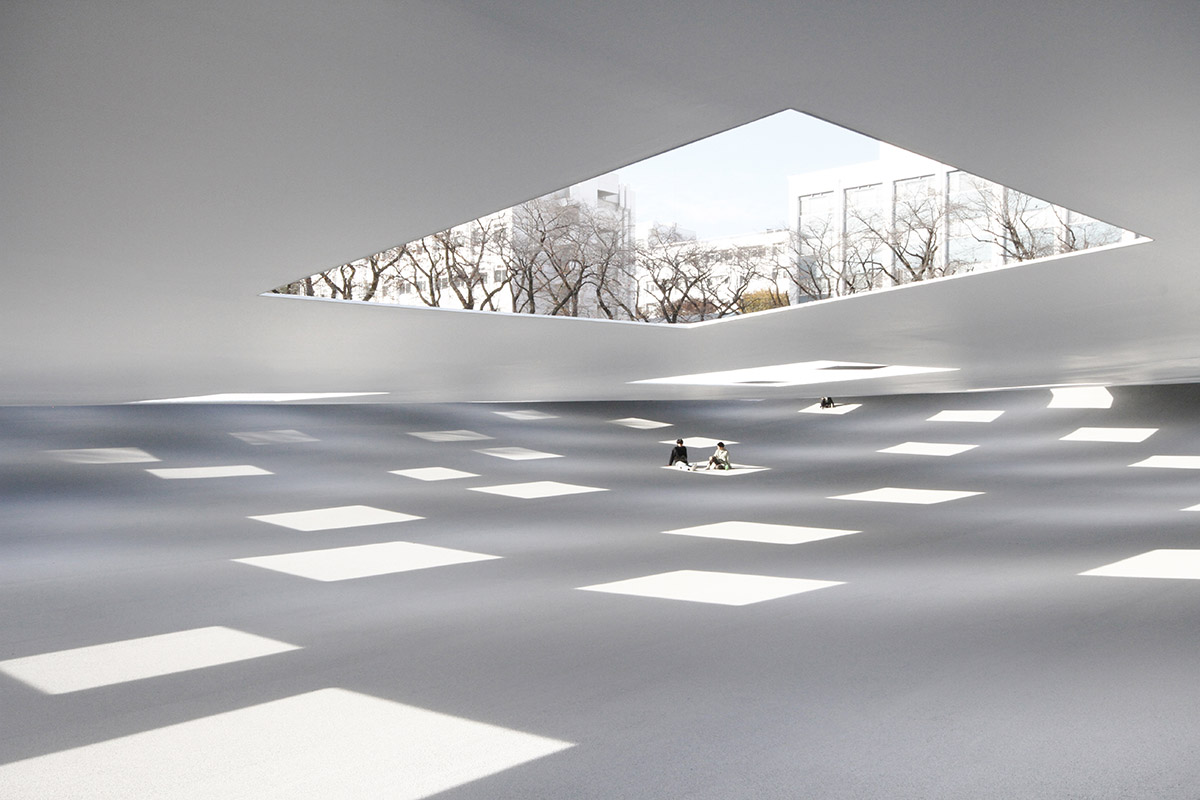 Although there many versatile spaces on the campus for the students to take a break, sit and relax, there was a need of a heterogeneous space offering new ways of experiencing the space in multiple levels.

According to the architect, it was important how you spend your time in this expansive space, and as a result, it would become a place where you forget the time.

As Ishigami emhasizes, "the process of passing time becomes the subject, meanwhile the sense of program would be relatively less prominent." 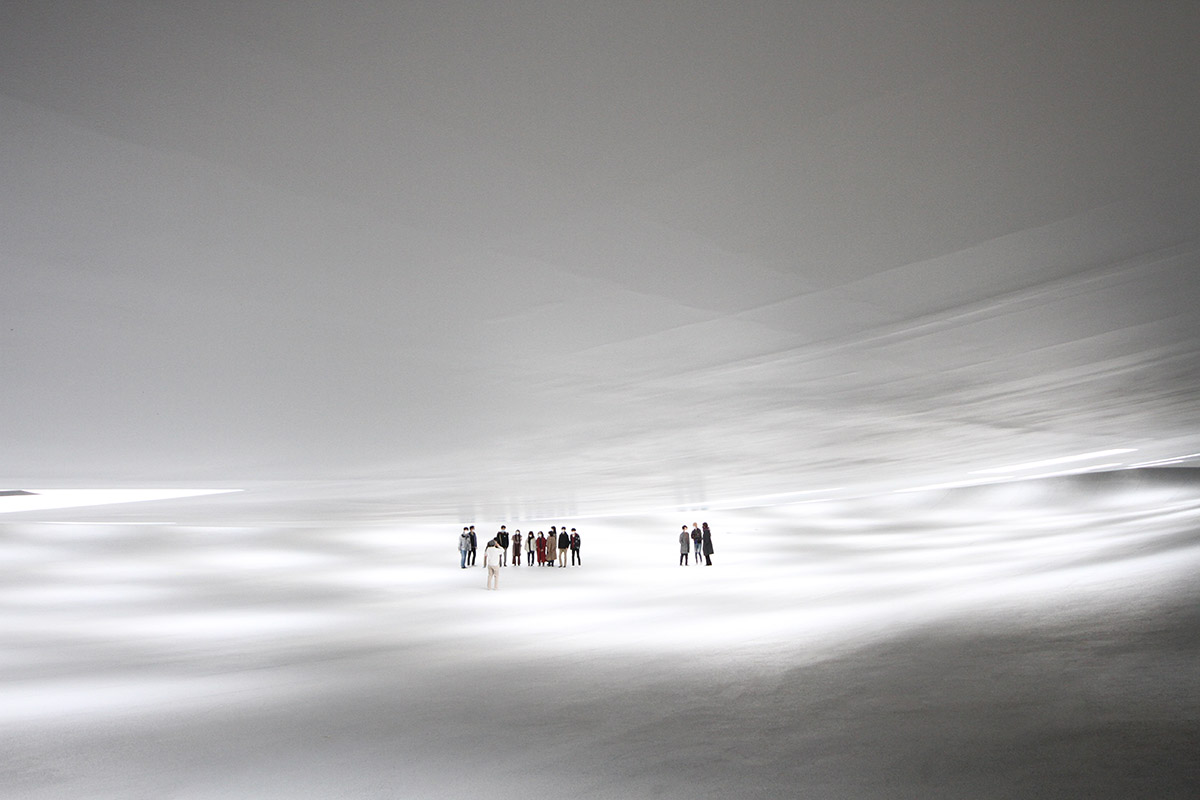 For the principle of semi-outdoor, Ishigami intends to reinterpret the notion of "semi-outdoor" in between the process of designing and planning. 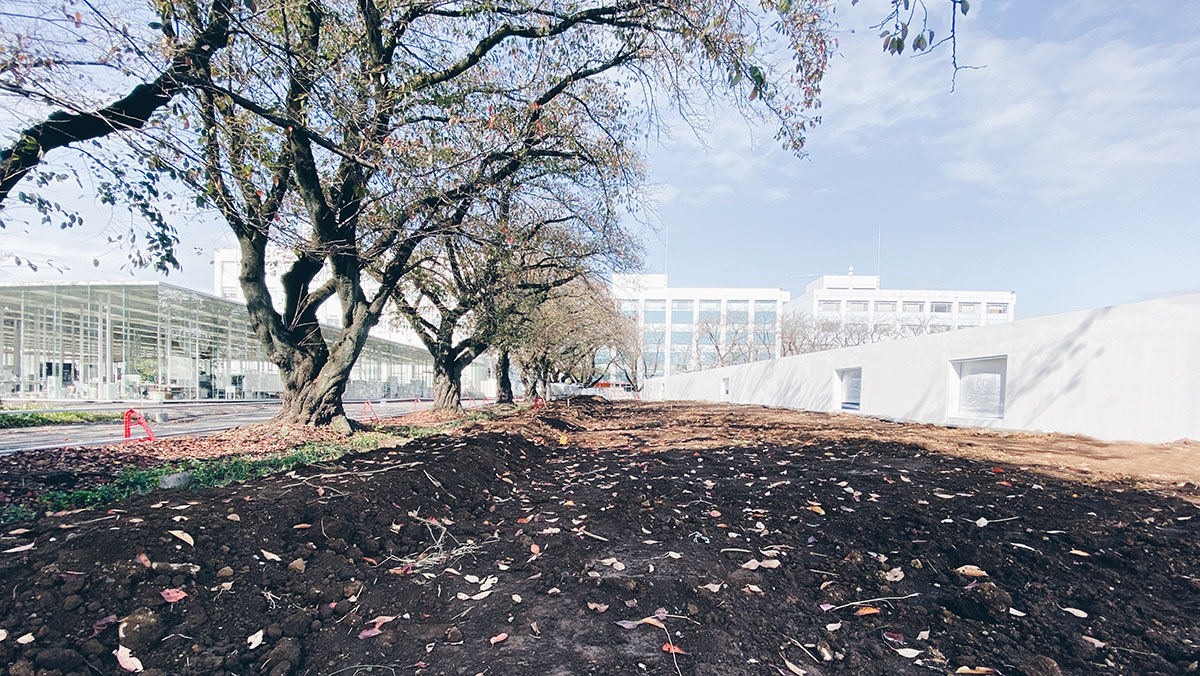 For this reason, the architects preserved half of the characteristics of existing environment, while elevating the other half by adding new elements to the design. As the main focus on "the sense of experience", the architect's main intention was to define a new “outside-ness” by using new design techniques.

Landscape can be interpreted and experienced in different ways according to the architect such as subjective physical experiences or weather conditions. But in this plaza, while the structure becomes a giant landscape itself, it provokes users to feel themselves more comfortable and trigger the feeling of willing stay for a long time within the plaza. 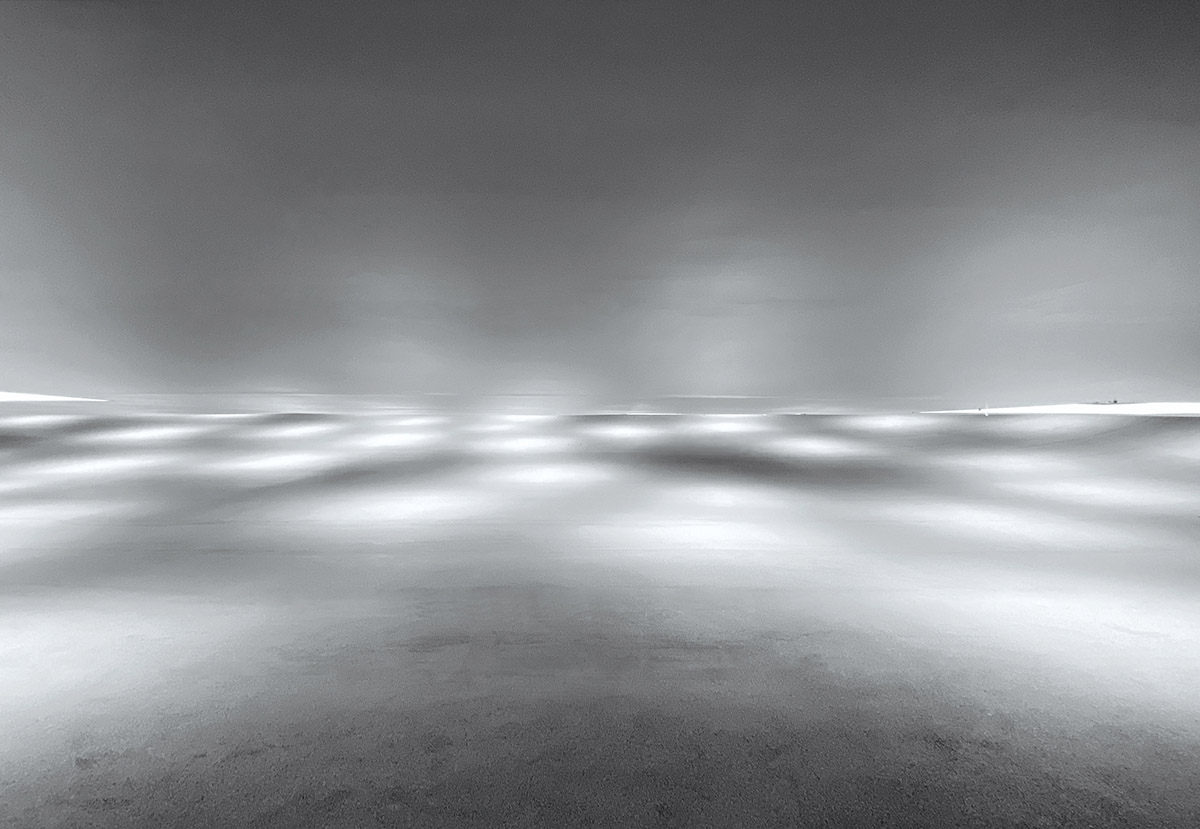 Upon entering the plaza, users are surrounded with a magnificent view and horizon and they feel disappeared in the curved surfaces and eternity.

Aiming to provide a scenery to the KAIT Workshop, the project's scale was implemented to the entire site. As the project took the advantage of the existing 2 meters of height difference between the campus ground level and project plane, so the height of the building was minimized to create a new ground space that is integrated with the natural ground. 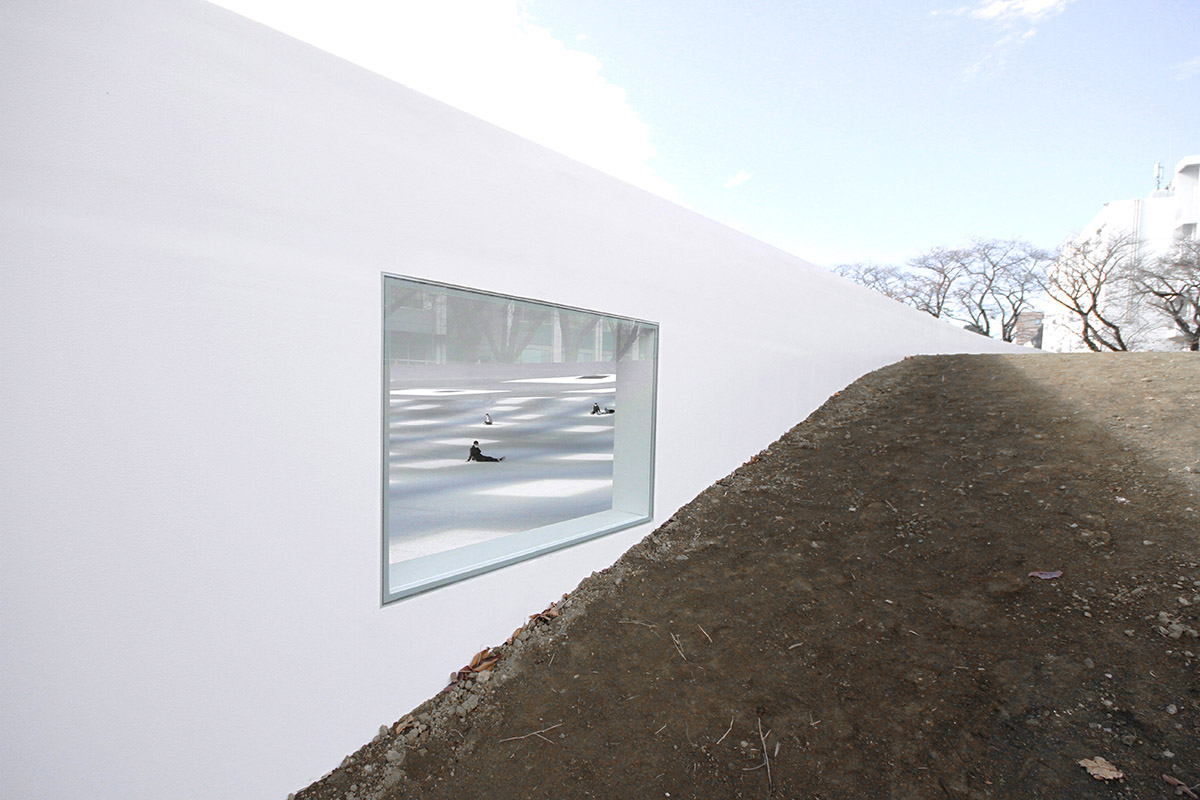 The structure of the plaza is lifted up with an expansive iron plate on four supporting walls. As the structure doesn't include any column inside, the iron plate is slightly bended to create this spectacular curved surface.

The ground was also made concave in parallel to the smoothly curved ceiling. To balance the proportion of the building in section between the sky and earth, the architects kept the height of the ceiling as low as possible in relation to the vast plane of the space. 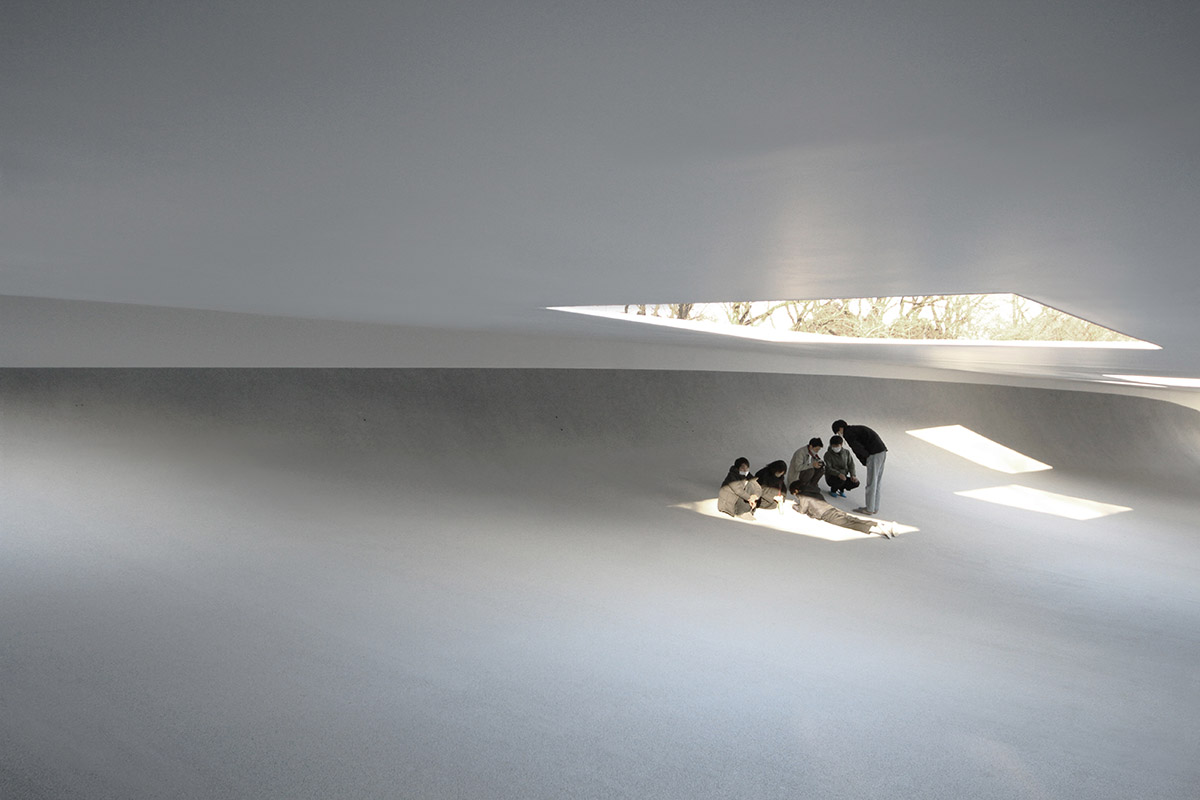 Creating a porous structure as a whole, the plaza inlcudes 59 openings on the roof. The interior is well-lit though these openings, thanks to its lowered ceiling and the numbers of opening it has, the other areas of the plaza can also benefit from the day light. 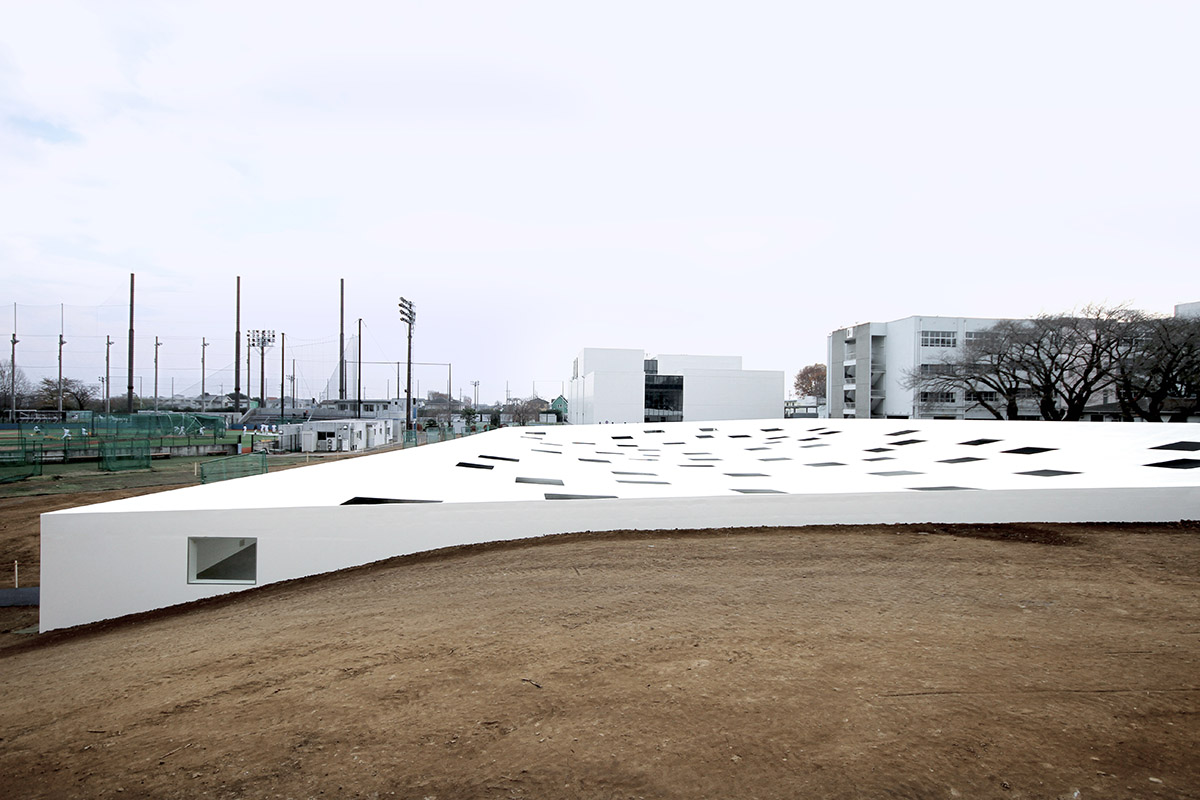 "You can feel the sound of rain in the room, and see the rain in front of you, so the natural changes perceived by the body become the architectural scenery," says Junya Ishigami.

The plaza becomes a fully experiential structure responding to all conditions.

In design process, the architects carefully considered all stages of planning and application in terms of scale, technology and material of construction to have the accurate result.

Reaching at maximum 90-metre width, as it runs a long span, the team took into consideration of the change of ceiling height that could reach 30cm due to the thermal expansion and contraction of the iron plate. 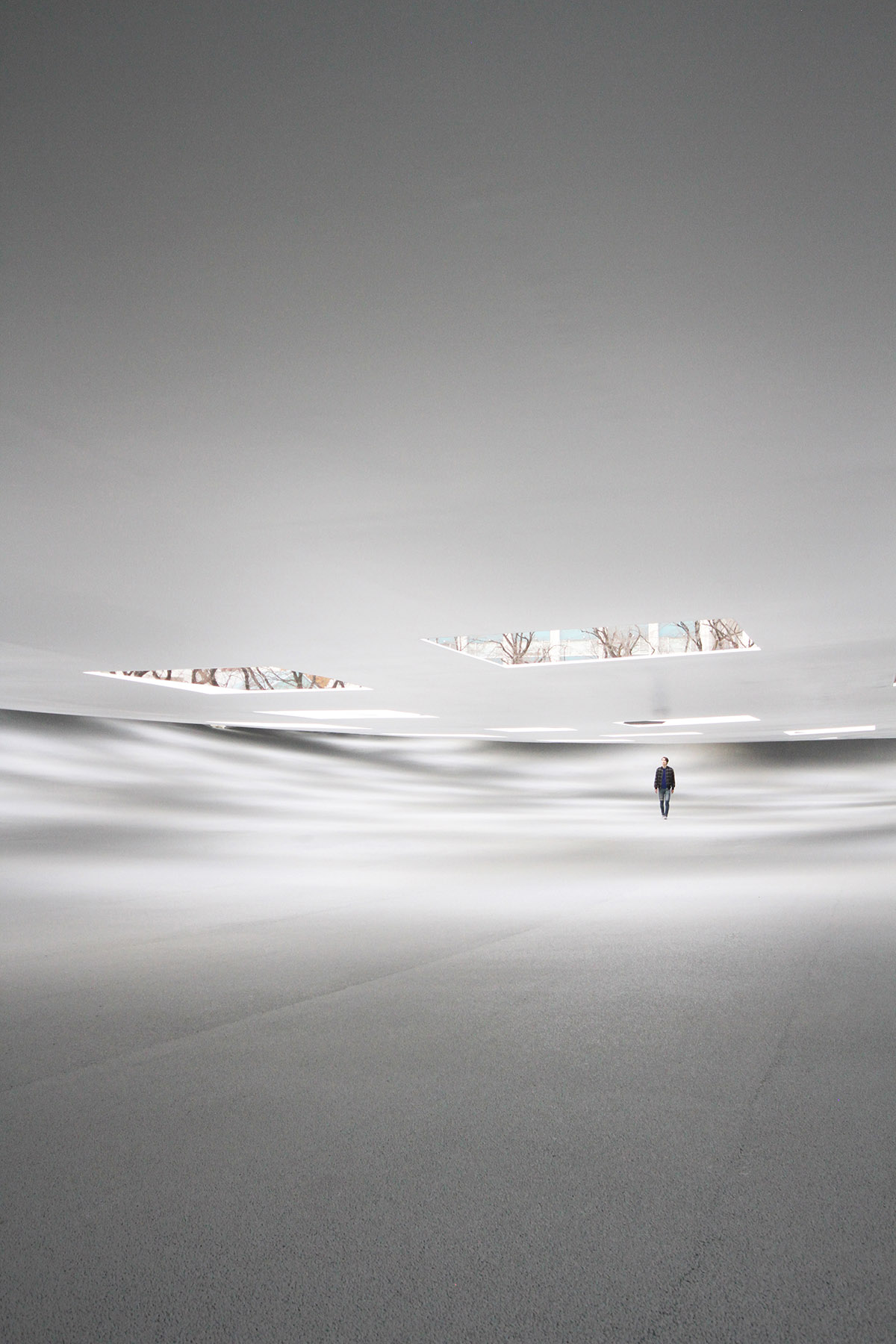 Due to the structure's grand scale on site, the team used 83 piles and 54 ground anchors for its gigantic concrete foundation beam, with the ground sloping in a height difference of 5m. The result of the overall structure looks like "a rotating a suspension bridge 360 degrees."

Considering human scale for the structure, the ceiling height of the building ranges around 2.2~2.8m and this measurement is also taken into account according to the Japanese dwelling standards, while the iron plate of the roof is 12mm in thickness conforming to the dimensions of the furniture.

Ribs were installed as compression rings within 3 meters of the roof iron plate’s outer circumference in order to reduce the burden of tension exerted on the walls. The thickness of the walls is 250mm, which is the same to the standard of regular building constructions. 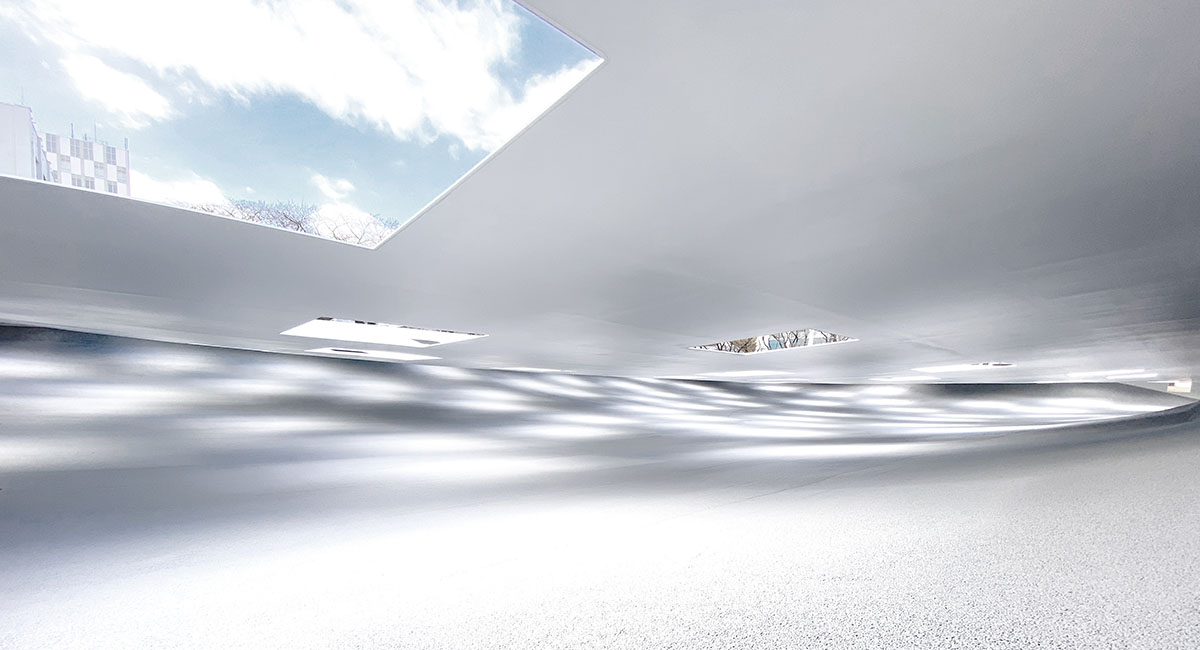 For material use for the building, the ground was covered with water permeable asphalt, which is treated with high- pressure cleaning to completely remove the oil before painting. Because of the material's property, the rainwater can be instantly absorbed when it gets into the building and flow into the ground, keeping the room dry, so visitors would not feel unpleasant when it touches to human skin.

For this plaza, the architects gave much importance to the relationship between people and environment. Ishigami wanted users to feel themselves as close to the building as possible, to experience the nature while they are in the building, and to spend more time in the plaza. 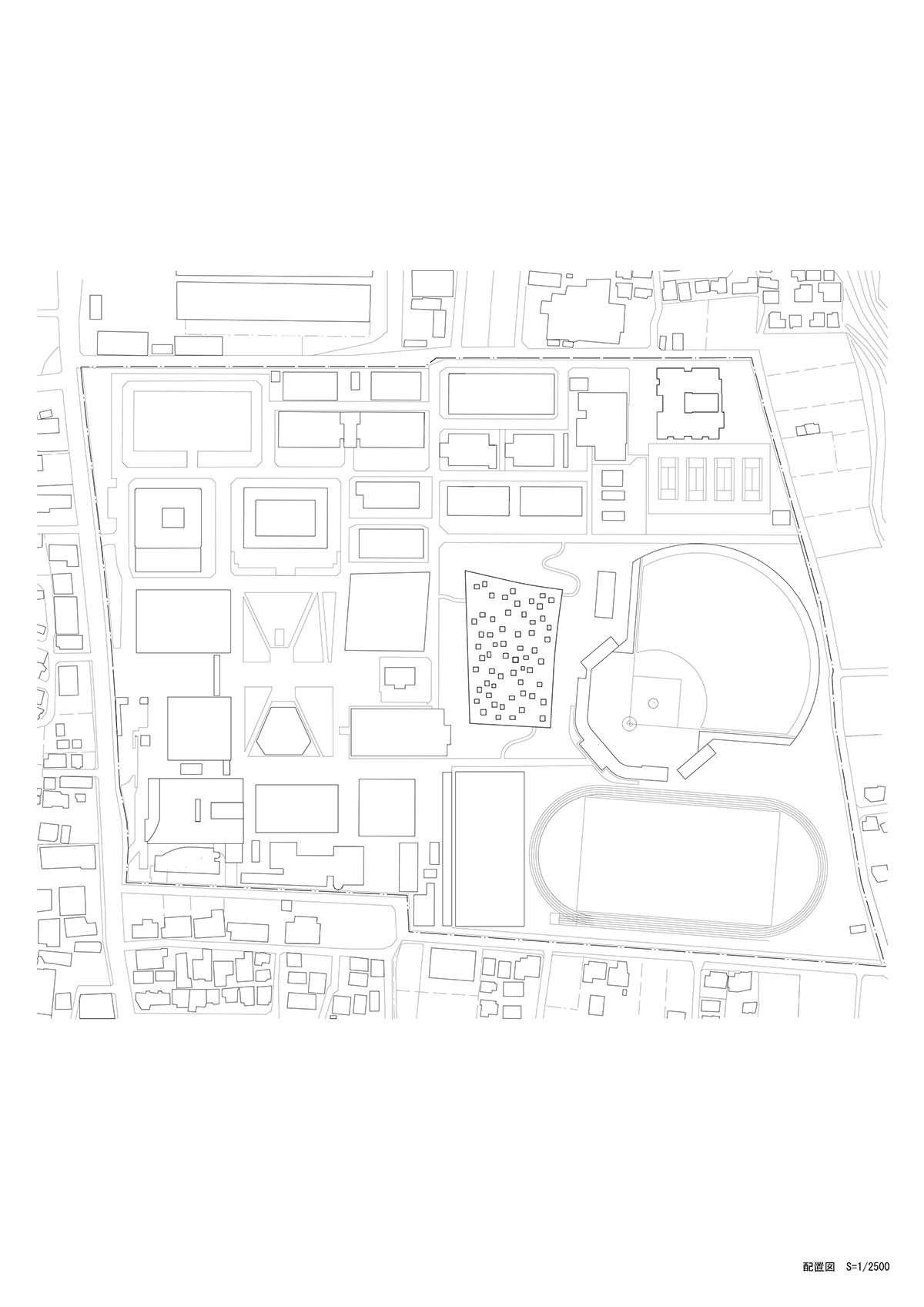 According to the architects, while buildings are elevated with human actions with sitting, lying and creating connections with chairs and other furnitures, this building has been conceived to be the “sitting” state. Pretending a comfortable hill-like slope, users can feel themselves almost like in a huge bed.

"The body and the environment are integrated as one scenery," added Junya Ishigami. "Like the urban ramp that becomes a monument in the city, this slope will also become an emblematic place on the campus."

"This new space of "outside-ness" serves as a campus plaza and becomes a gathering place for people on campus." 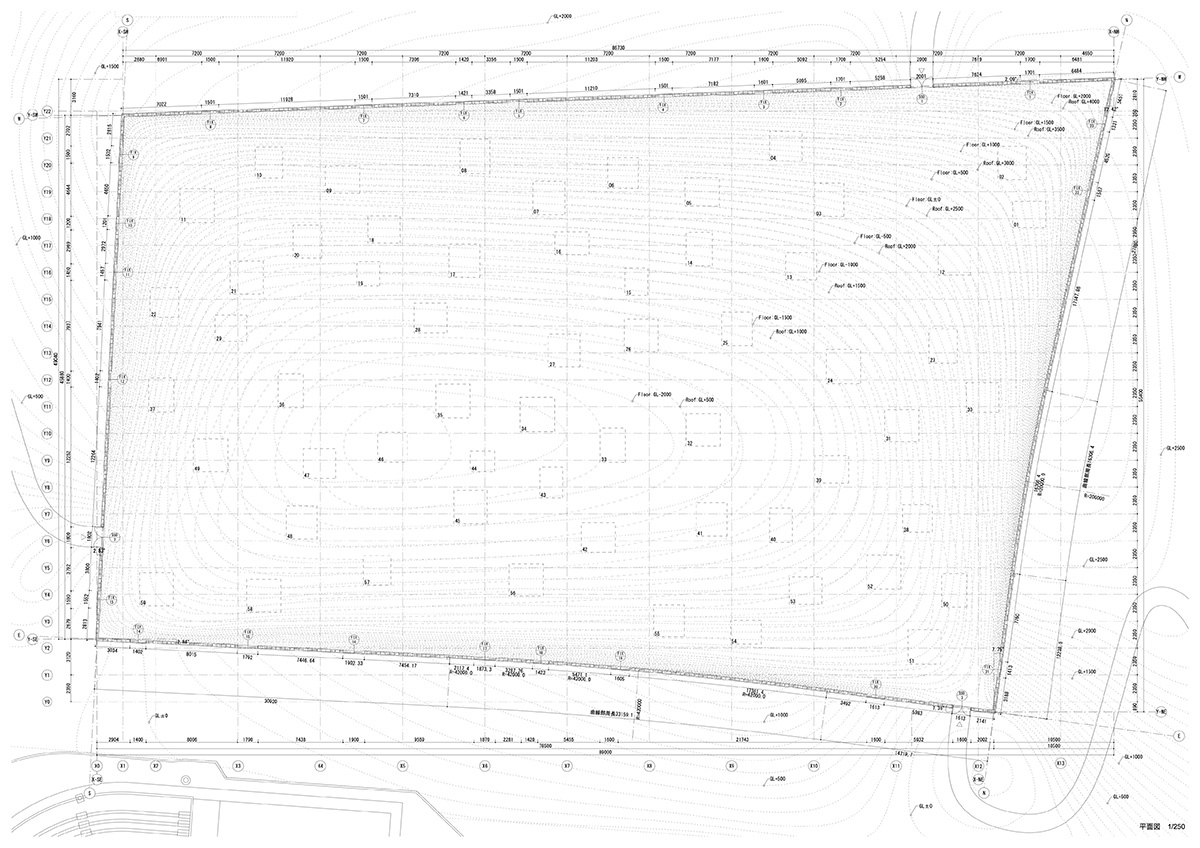 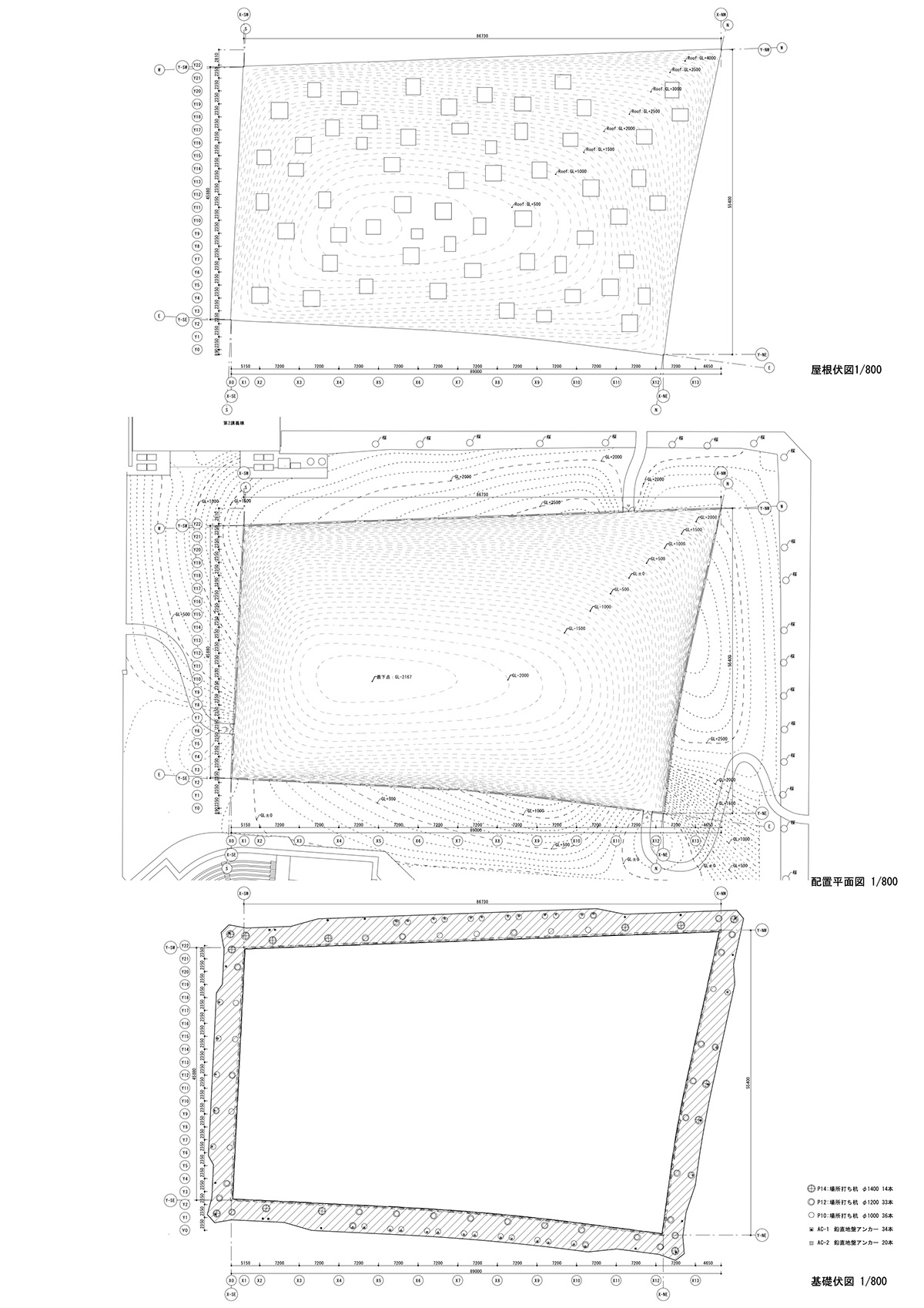 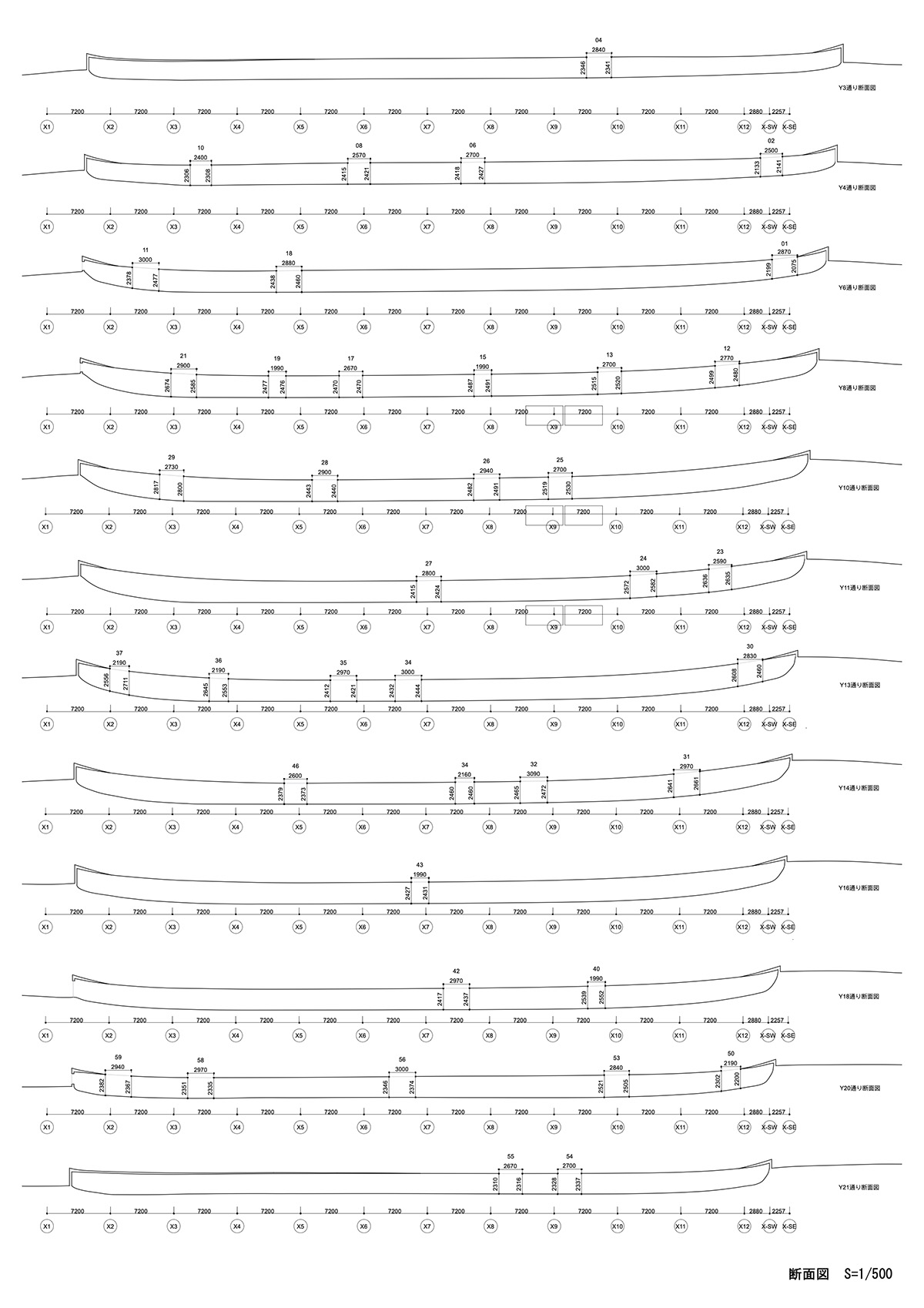 Ishigami's key projects include the KAIT Workshop, Kanagawa Institute of Technology in Japan in 2008, Japanese Pavilion at the 11th Venice Architectural Biennale in 2008, Park Groot Vijversburg Visitor Center, Tytsjerk in The Netherlands in 2012, Botanical Garden Art Biotop / Water Garden in Tochigi, Japan in 2018.