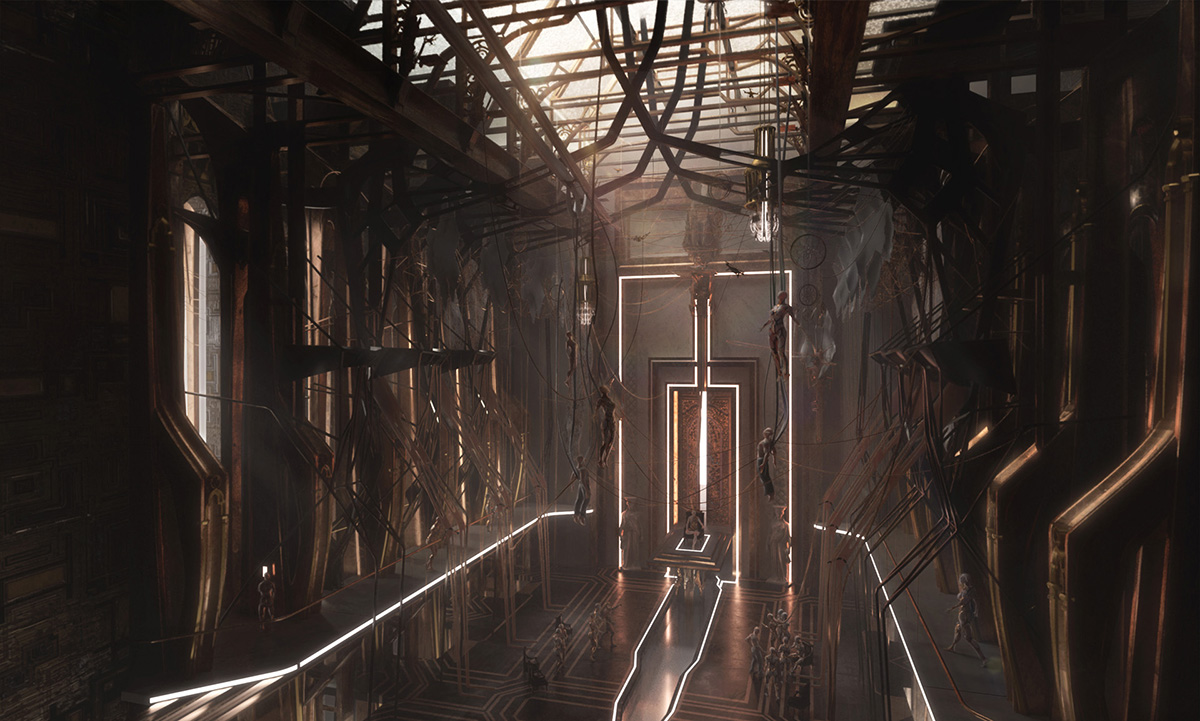 Render Battle 2020, an international architecture visualization competition, organized by theCharette, unveiled the winners of this year’s edition. The competition’s aim was to find one mind-blowing architectural graphic that conveys an architectural design in the most nuanced way possible. The contest is an annual competition and will be released again in 2021.

Renderings have been an architect’s greatest medium to convey a design. It is the art of creating images that highlight the best attributes of an architectural design. Architectural renderings can take many forms – digital collages, hand sketches, perspectives, illustrations, drawings, realistic renders etc. Our world is becoming increasingly visual every day. The digital revolution has given architects the opportunity to showcase our designs to millions of people. However, with thousands of images flowing across the web, each designer has just a brief moment to make an impact via one bold image that says it all!

The full results, including the winners, the honourable mentions, and the top 30 shortlisted entries can be viewed on this page.

Read on to discover the results of the 2020 edition of the competition and the top three winners: The Fifth Orchestration: Debate Chamber by Edwin Maliakkal from United Kingdom took home the top prize with its captivating visuals. The self-taught artist designed a graphic that the jury described as “intriguing”. The jurors felt that, "The idea is really interesting, and the image illustrates it in a great way. The composition is good, the lighting creates a mysterious atmosphere, and the colors support the concept."

We live in an age where one can experience space both through physical and virtual realities. Our cognition extends beyond our bodies. Our surroundings become an extension of our minds, the stage on which we dance to the rhythms that line the walls, trace the light that reveals the soul. We become the space we experience. Architecture, therefore, ceases to simply exist within built reality, and instead, fabricates a hyper-real landscape in our minds that we perceive as reality.

The debate chamber becomes an architectural response to the above statement and a reaction against the chaos of biological inefficiencies in democratic legitimacy. Stipulating a future in which we share a symbiotic relationship with machine and AI, the individual becomes one with their surroundings and the collective mind. Thenceforth, embodying the soul of a democratic system, they take part in the debate.

Everything in life is as much fiction as it is fact.

Anoovab Deka from United Kingdom, won second place for his graphic, "Everything in life is as much fiction as it is fact."

The judges loved the creative vertical composition with interesting framing elements that draw the observer into this strong single-point section perspective. They felt that the architectural elements and suggestion of materials are well-articulated.

This indeed is a spectacular work that straddles the line between highly detailed and abstract. The hatching / line-drawing technique is exceptional.

The inherent contradiction ignites a sparkling processus which enlightens consciousness and illuminates the view of the world. The objective is to create a similar phenomenon of space which the mind holds and creates. A space that is in choreographed or un-choreographed motion, revealing its histories and excavating embedded fictions within the landscape and through the journey of enclosures and exposures will make us question between what is fact, and what is fiction.

Fact and Fiction and the boundaries that separate it can be explained in a multitude of ways and yet still have a sense of obscurity. 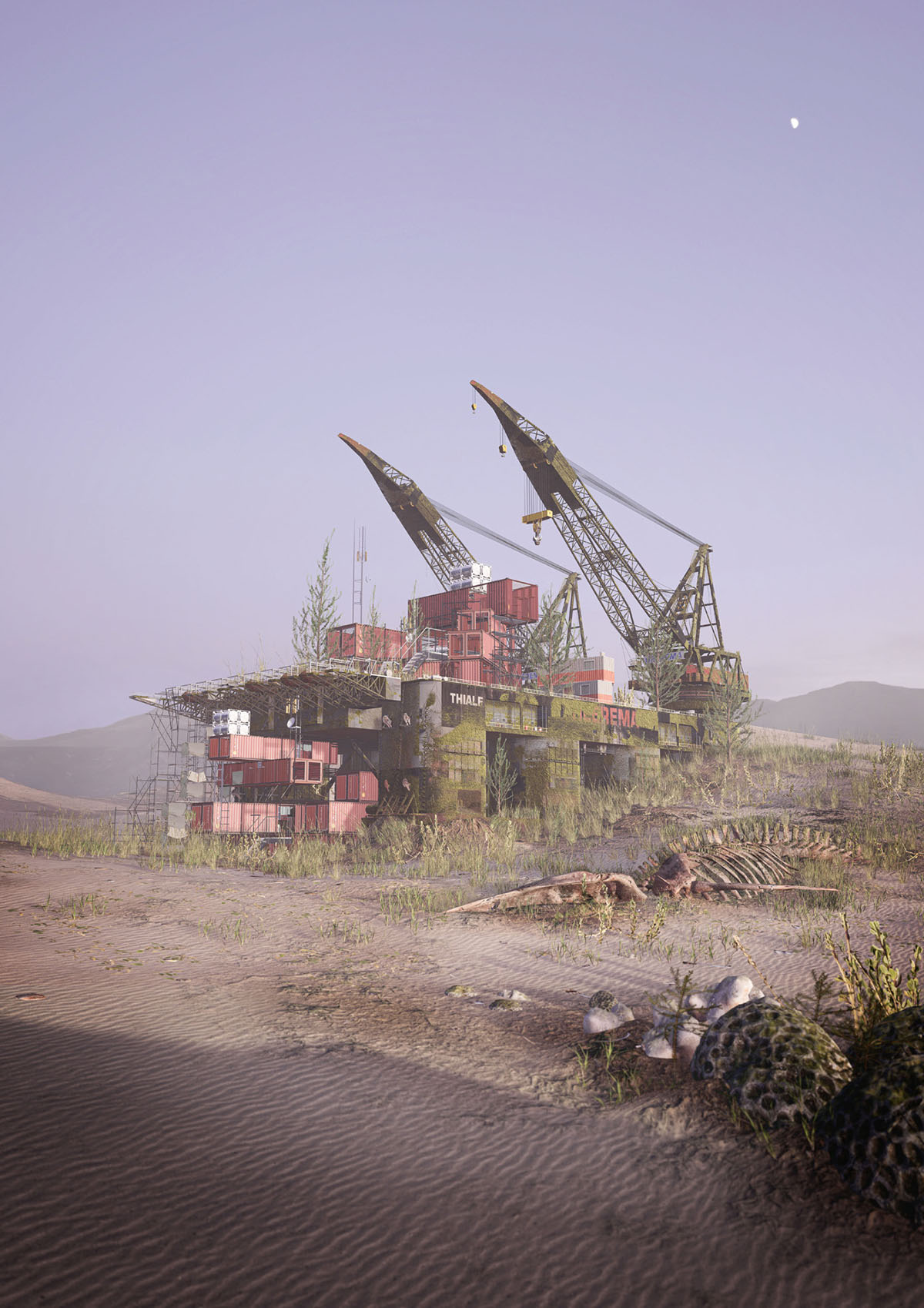 Third place in the competition went to Tai Zheng Wei & Toh Koon Theng from Malaysia. The image makes one ponder about the negative effects mankind is having on the planet, and how humans are on a path of self-destruction.

Mankind has irreversibly created a profoundly altered planet because of fossil-fuel-driven civilization. With the misdeed of mankind controlling greenhouse gases and global warming, rising sea level became more destructive for the world’s coastal cities and flooding billions of homes, forcing people to seek shelter from container ships with the remnants of plant samples and animals. Container ships were once carrying container loads and were then carrying humanity’s hope.

A century of voyage finally bought the ship to the ground after an extreme climate reversal vaporising the ocean. The ship was made redundant but fortunate for the voyager with botanical resources and living stocks, the ship remains became an oasis shelter in the middle of the dry sea.

"This is just the beginning of the end for mankind’s Noah’s Ark."