Designed by SOM, The Moynihan Train Hall expansion for NYC's Penn Station has opened its door 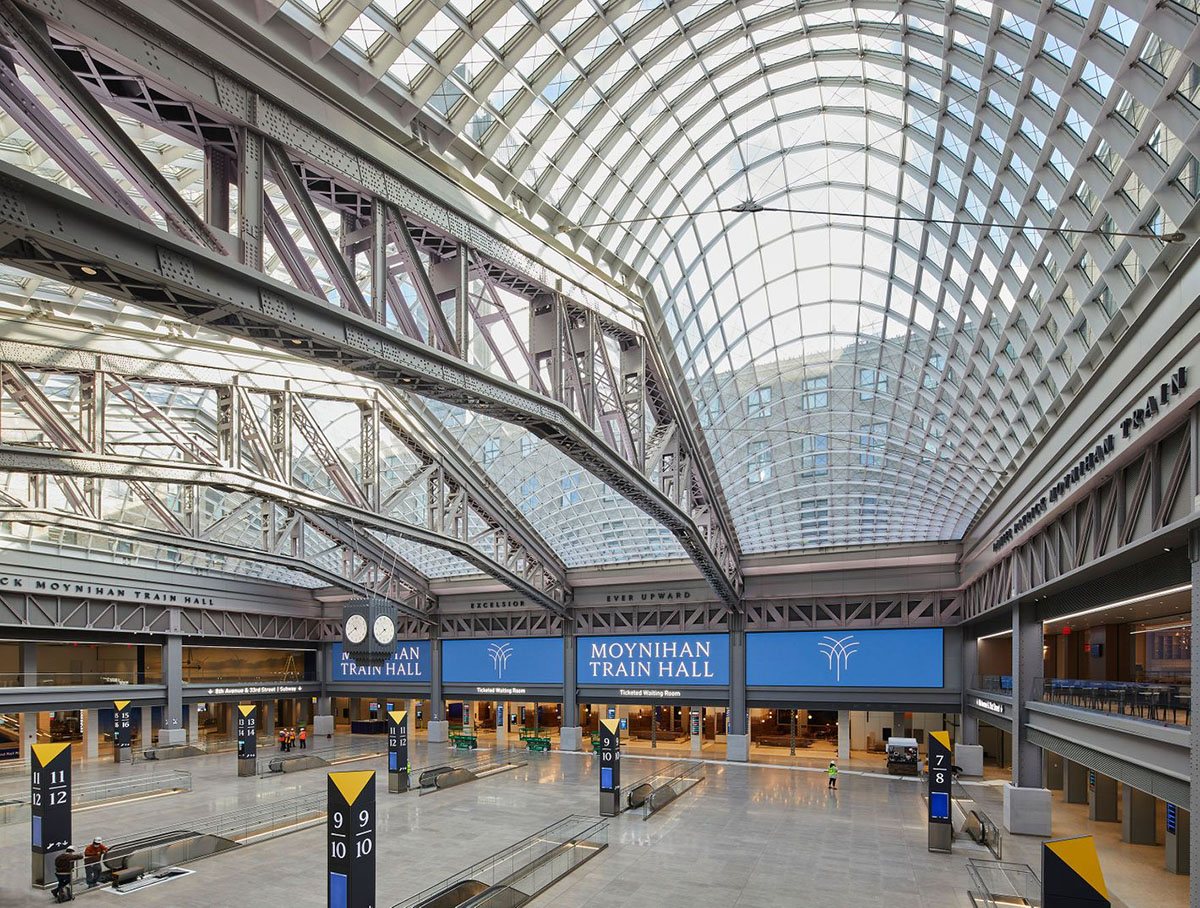 Starting January 1, the new Daniel Patrick Moynihan Train Hall, named for the visionary United States Senator who proposed the project in the 1990s, has opened its doors to New Yorkers and travelers from the entire northeast region. It is one of the most monumental civic projects undertaken in the city in a generation and transforms the way millions of people interact with one of the world’s largest cities.

The original Penn station designed in 1910 was a skylit, beaux-arts masterpiece that celebrated travelers’ arrival to the city. In 1965, after its demolition, only its concourses and platforms remained, and they were all underground in a space downgraded to accommodate only 200,000 people. Five decades later, the number of people passing through the station every day swelled to more than 600,000, while the Farley Building – also designed by McKim, Mead & White in 1913, with a grand staircase and colonnade that echoed the firm’s design for Penn Station – had become 95 percent vacant. Residing above Penn Station’s tracks, the Farley Building was the perfect place for a new train station. 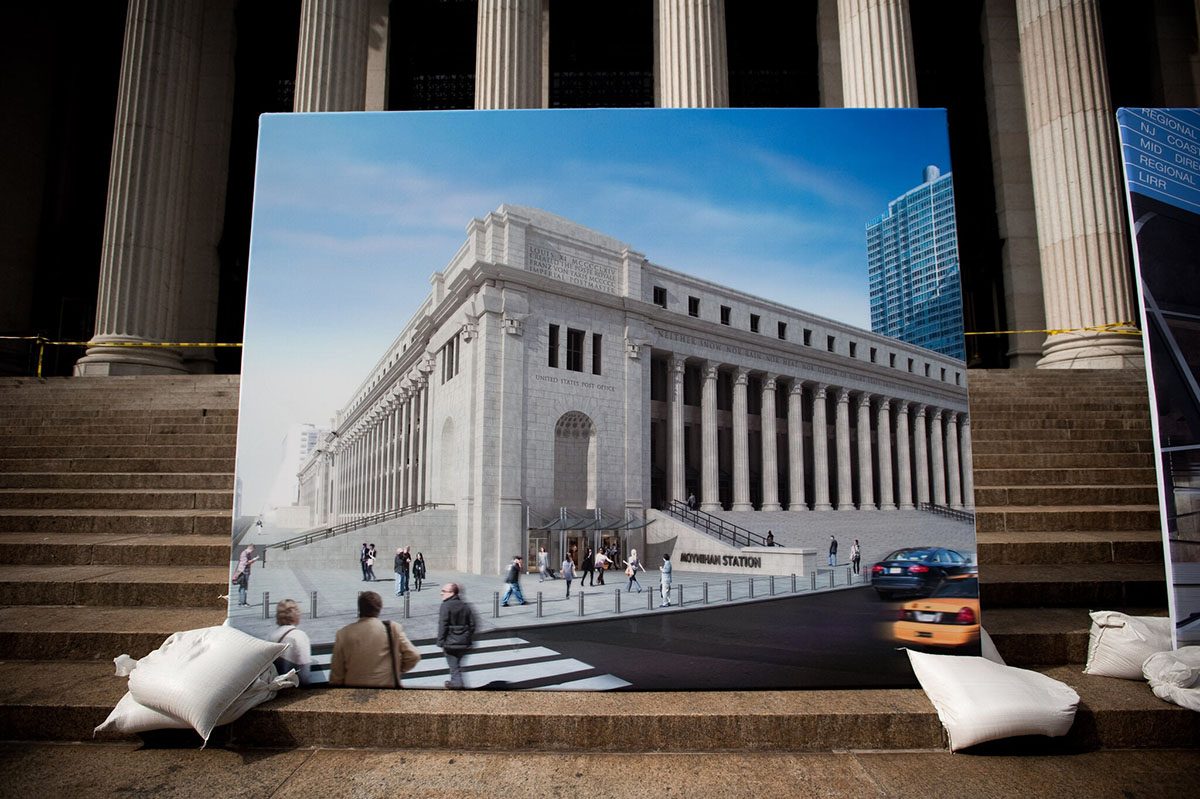 The transformation of the Farley Building into an extension of Penn Station has been debated for decades. The idea was first proposed by Senator Daniel Patrick Moynihan. Image © Eric Michael Johnson, The New York Times

Work began in 2017 on the $1.6 billion conversions of the former post office into a transit hub, with Skidmore, Owings & Merrill leading the adaptive reuse project. Situated across Penn Station between Eighth and Ninth Avenues and West 31st and 33rd Streets, it reverses the dark, overcrowded experience that so many commuters have endured for decades.

The facility’s most impressive component is its glass canopy. Connected to Penn Station by underground passageways, the train hall features a 92-foot-high glass skylight (a restoration of the original 1912 steel trusses), a business center, a food service, and other features for passengers traveling to and from New York City. The new train hall, located in the 31,000-square-foot former mail sorting room, is designed with a dramatic skylight that traverses the entire space. It brings light to the concourses and increases total concourse space by 50 percent, and restores the grandeur that was lost with the demolition of the original Penn Station half a century ago. 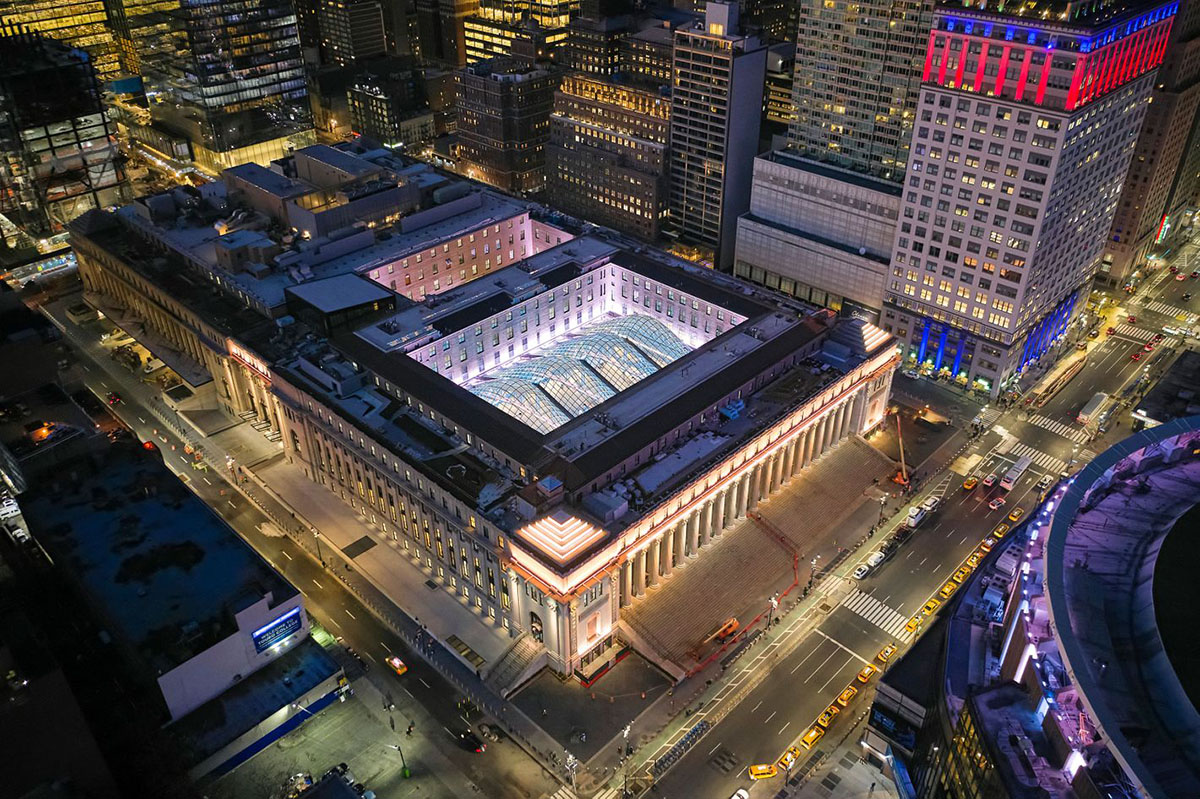 The skylight is arranged in four catenary vaults. To support the structure, SOM uncovered the building’s three massive steel trusses and chose to reveal them as a major focal point of the design. With a web-like structure, the bolted trusses add an extra sense of lightness to the train hall – establishing a modern look and feel while displaying the workmanship of neoclassical design. Each of the four vaults is composed of more than 500 glass and steel panels that come together to form a moiré effect. The trusses are each equipped with new lighting fixtures that illuminate the train hall at night. On the middle truss, a new clock – designed by Pennoyer Architects and inspired by the analog clocks that were once prevalent at the original Penn Station – marks the center of the room.

“One of the most remarkable things about this project is the way that it transforms an under-utilized and under-appreciated building into a new, inviting front door for this city,” said Roger Duffy, the retired SOM Design Partner who led the project for the firm. “The train hall is at the core of this transformation. It is designed with lightness and warmth, which combine to reestablish the essence of what it means to come to New York.” 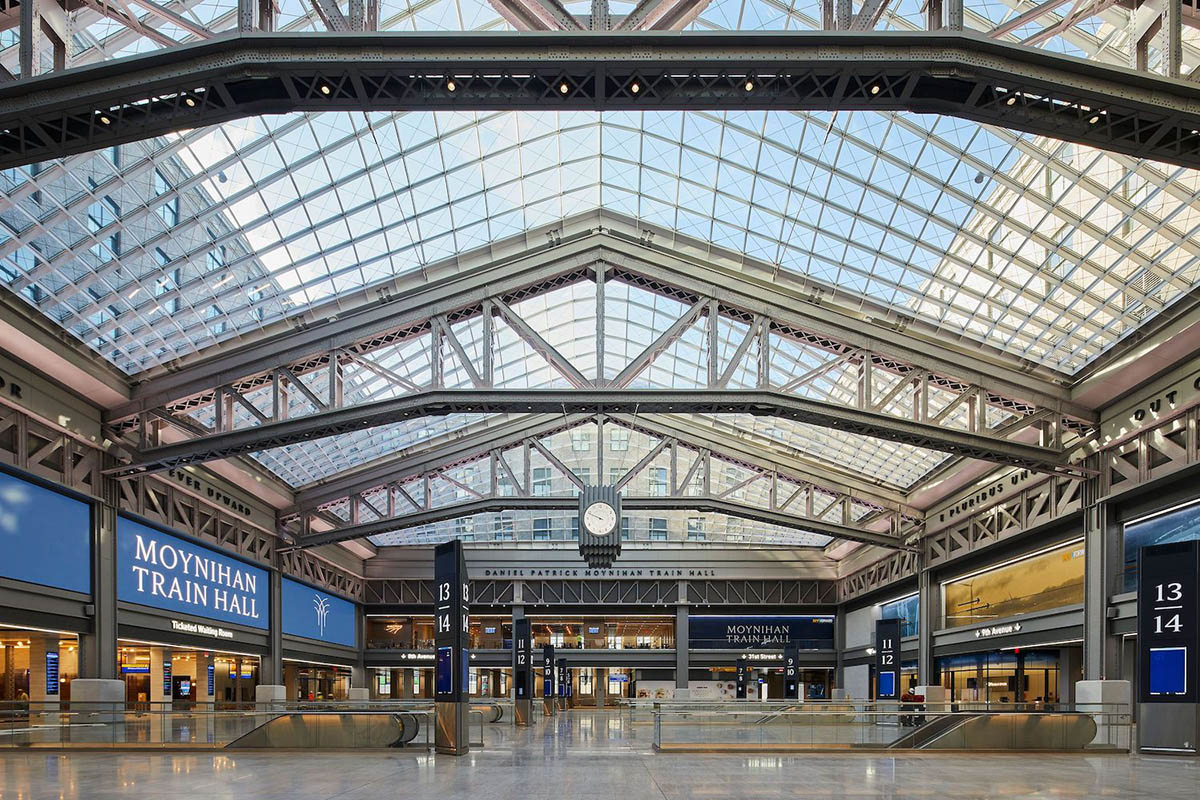 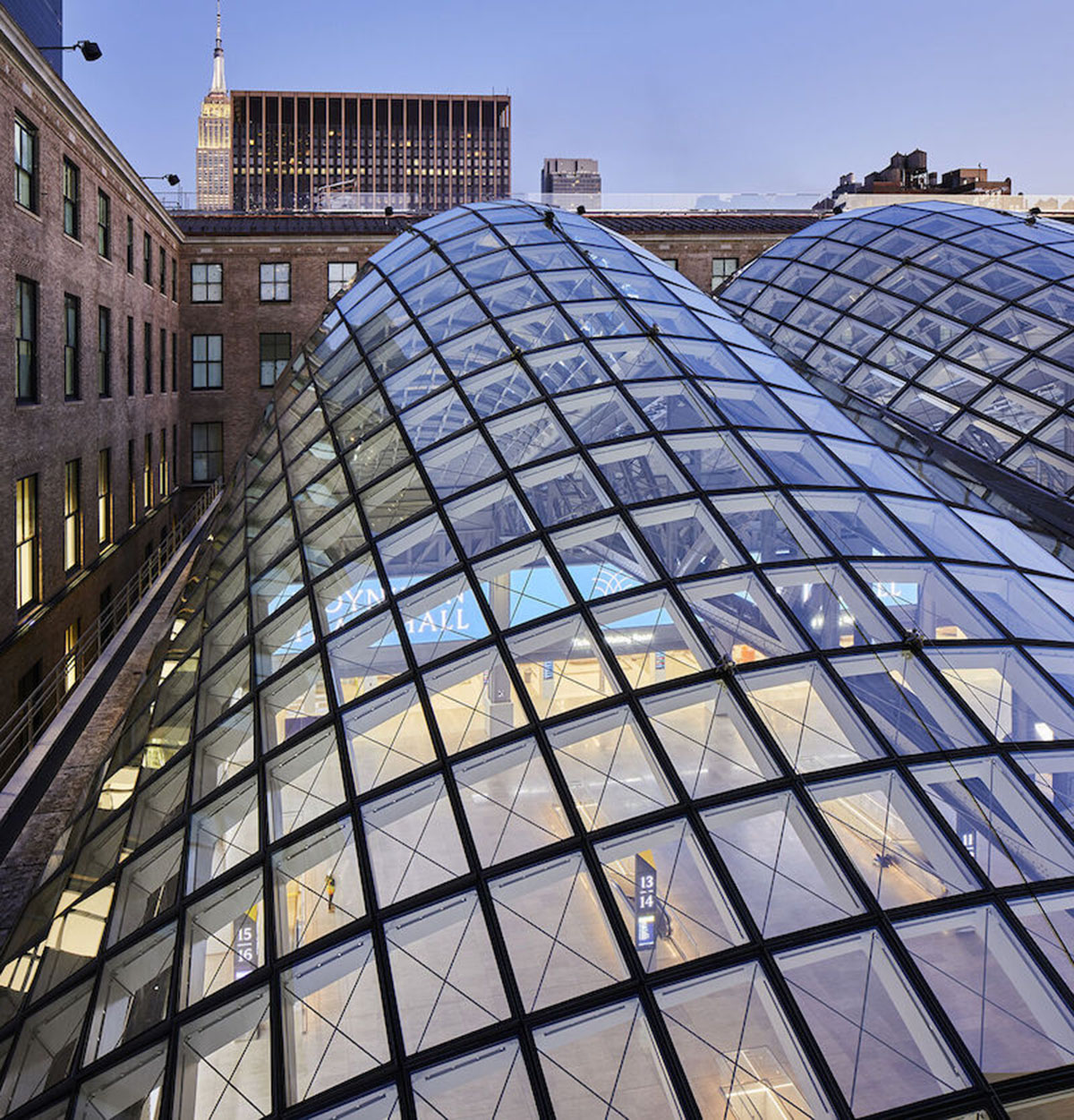 Along the eastern wall, four large LED screens feature New York State imagery designed by Moment Factory and help brighten the train hall at night. Hospitality spaces – including ticketing kiosks and information kiosks designed by SOM, Amtrak waiting rooms on the concourse level designed by Rockwell Group, an Amtrak Metropolitan Lounge by FX Collaborative, and a food hall designed by Elkus Manfredi – surround the space on two floors to establish an inviting experience that provides all the amenities a commuter will need. The signage and wayfinding identify the hospitality and platform entries by color to enable intuitive circulation through the station – an element that has largely been missing in the confusing corridors of Penn Station for the last 50 years. 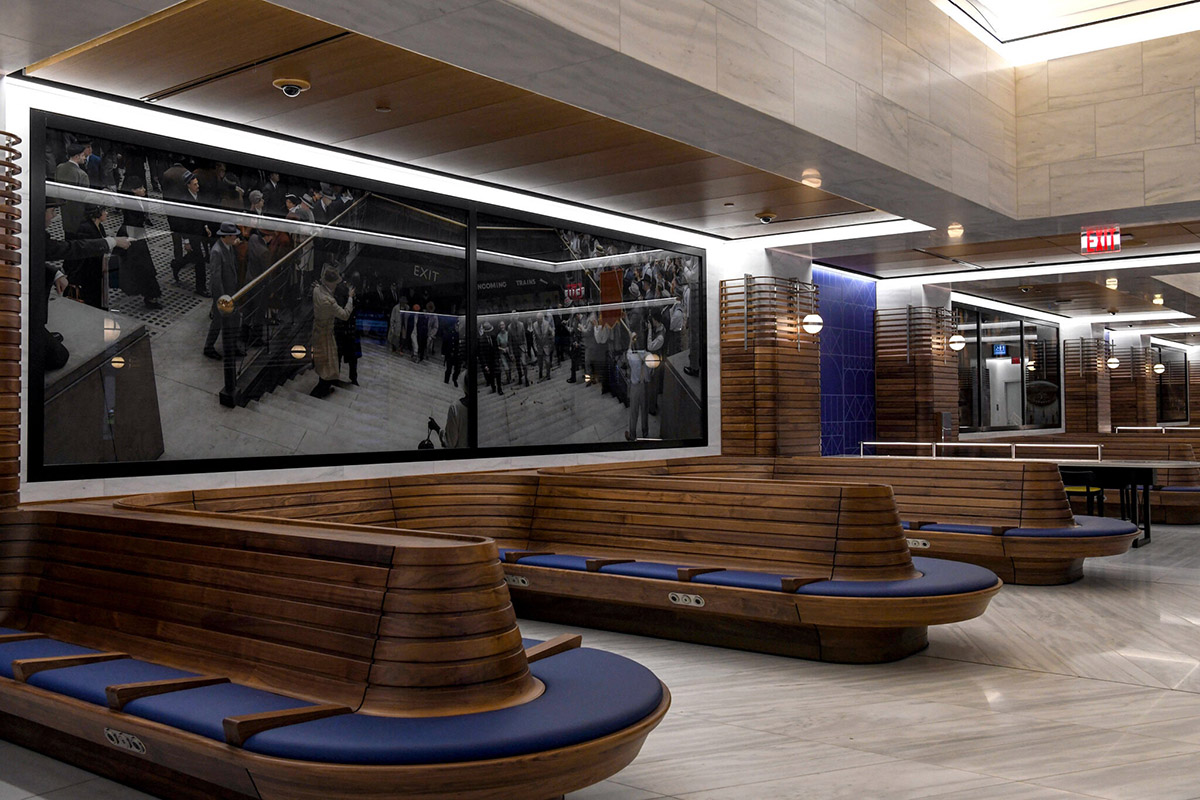 The inviting waiting area for ticketed passengers, designed by the Rockwell Group, was inspired by the wooden seating and globe fixtures in the old Penn Station. Image © Andrew Moore, The New York Times 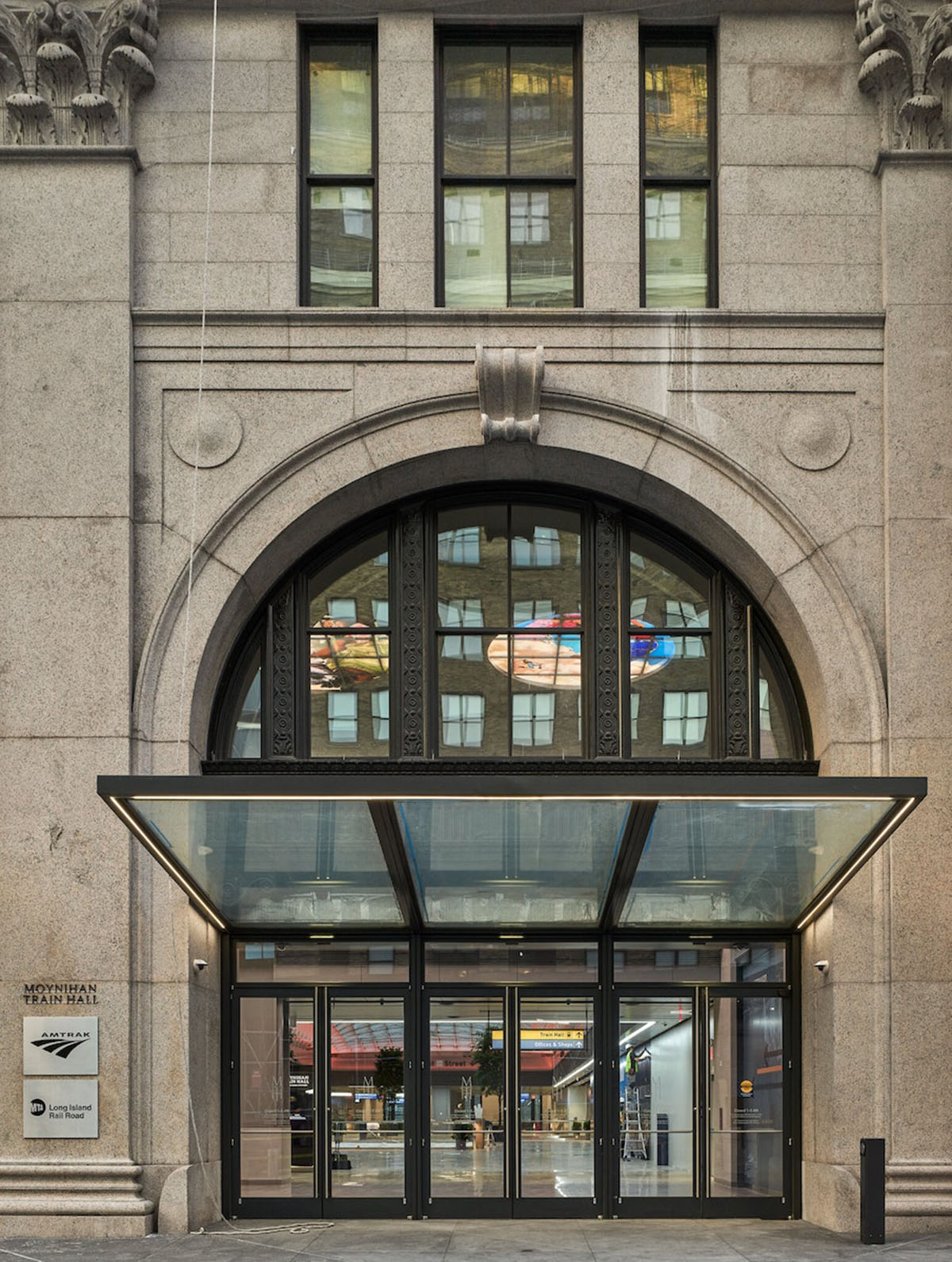 For travelers, a new front door to New York: A glimpse of Kehinde Wiley’s ceiling fresco at the entry to the Moynihan Train Station on 33rd Street.
Image © Andrew Moore, The New York Times

Moynihan Station connects to nine platforms and 17 tracks that primarily service the Long Island Railroad and Amtrak. The station connects directly with the Eighth Avenue Subway, and plans are in the works to connect the entire Penn Station complex, including Moynihan Station, to MetroNorth and AirTrain JFK. The Station is accessible through a variety of grand entrances. As part of the first phase of its construction, two new entrances on Eighth Avenue, designed by SOM, flank the Farley Building’s staircase and lead directly into the train hall and the new West End Concourse – a significant widening of an existing concourse that serves as a connection between Penn and Moynihan Stations. At entrances on 31st and 33rd Streets, SOM implemented new canopies to help identify the civic presence of the station and complement the arched windows of the Farley Building. Art installations by Elmgreen & Dragset at the 31st Street entrance and Kehinde Wiley Studio at 33rd Street, as well as a second skylight create an inviting experience, draw passengers in. “The Hive,” one of three permanent art installations, is inside the entry on West 31st Street. Image © Andrew Moore, The New York Times

In the ribbon-cutting ceremony, New York Governor Andrew Cuomo said the project is able to open on time because of public health protocols and schedules that helped keep construction workers safe and on the job during the COVID-19 pandemic. "This monumental project is a shot of hope as we come out of one of [the] darkest periods in our history and sends a clear message to the world that while we suffered greatly as a result of this once-in-a-century health crisis, the pandemic did not stop us from dreaming big and building for the future," he said. “The new Moynihan Train Hall is the embodiment of New York Tough.” 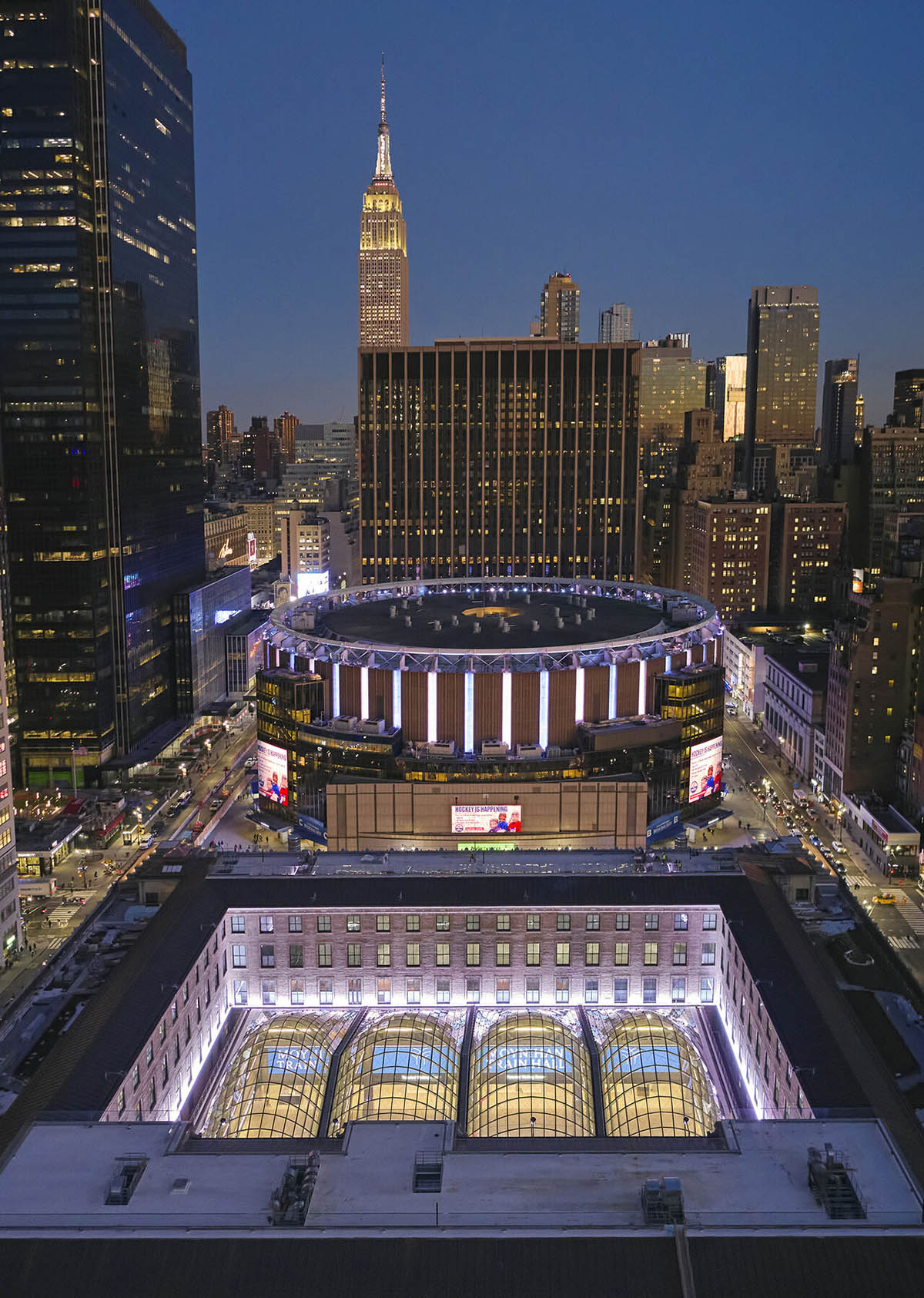