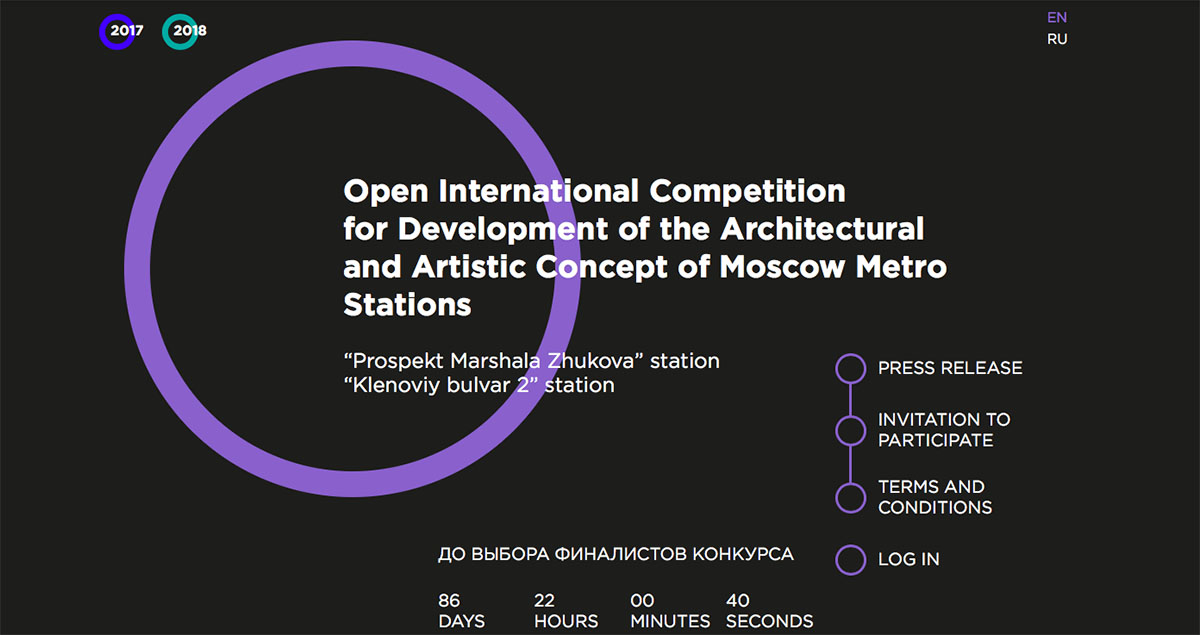 Details have been revealed for the design of two new Moscow Metro Stations, which shows the competition has been closed.

As of May 21, no more applications will be accepted to take part in the International Competition to develop architectural and artistic designs for stations on two new branches of the Moscow Metro, Prospekt Marshala Zhukova Station on the Rublevo-Arkhangelskaya Line, and the station with the working name “Klenovy Bulvar 2” on the Biryulevskaya Line.

The competition was initiated by Mosinzhproekt JSC, the single operator of the Moscow Metro development program.

330 applicants from all over the world registered to take part in the competition. Applicants had to provide a relevant portfolio of projects and an essay describing the key ideas of their architectural and artistic designs for the stations.

"To take part in the competition, 78 applications were submitted from 12 countries, which is 50% more than the number of applications filed to take part in a similar competition in 2018," said Andrei Bochkarev, Deputy Mayor of Moscow in the Moscow Government for Urban Planning Policy and Construction, President of the Jury.

"The competitors include 113 companies, of which 52 will participate individually and 61 as part of 26 multinational consortia. The competitors represent 30 cities from 12 countries. The number and geography of applications submitted suggests that the competition has aroused great interest both in Russia and abroad."

Most of the applicants are from Russia. Italy takes the lead among foreign countries by number of companies taking part in the competition, with 8 Italian companies competing. Italy is followed by Great Britain, with 6 companies submitting applications. The other international competitors are companies from Spain, Latvia, the Netherlands, Japan (2 from each country), and Hungary, Germany, China, Poland, and Uzbekistan (1 from each country).

"Based on the number of applications and participating countries, we see that competitions in Russia are of genuine interest to the international architectural community, and what is especially valuable – these connections are not lost, even despite the current situation in the world. The new competition will allow recognized experts to reach an even higher level, and novice specialists will be given a chance to reach their potential and be recognized in the professional environment. The level of competition for reaching the final is expected to be extremely high, and the struggle will be very strenuous. It is possible that such a powerful creative impulse will launch a new round of development for the entire Moscow Metro," said Sergei Kuznetsov, Chief Architect of Moscow, Deputy President of the Jury.

Rustam Cherkesov, Deputy Director General for Project Planning of Mosinzhproekt JSC, Member of the Jury: "The Metro is a strategic facility of big importance and complexity. The creation of each station includes the study of a huge number of engineering systems and connections. In order for passengers to feel comfortable at a newly built station and perceive its visual image integrally, architects need not only to come up with the “face” of such a station, but also to correctly integrate all of the engineering components inside the design project."

"When choosing the finalists on the basis of the applications, relevant portfolios, essays and visualizations proposed by the applicants, special attention will be paid to the correlation of the proposed ideas with the existing urban planning and cultural and historical aspects of the areas where the future stations will be located, as well as their ability to meet the needs of all categories of the population and meet today's high technological requirements."

"Mosinzhproekt JSC is the general contractor and general designer of new stations and lines of the Moscow Metro, and it is very important to us that the proposed projects are not only aesthetically attractive, but also meet all the requirements of the operating organization and can actually be implemented. After all, the new stations will become a part of the architectural ensemble of the Moscow Metro and will serve millions of citizens for more than a hundred years," Cherkesov added.

On June 2, during the first meeting of the competition jury, chaired by Deputy Mayor of Moscow in the Moscow Government for Urban Planning Policy and Construction Andrey Bochkarev, ten finalists will be selected (five for each nomination) who will continue the struggle in the second stage of the competition and share their vision for the image of Prospekt Marshala Zhukova station and of the station with the working name “Klenovy Bulvar 2”.