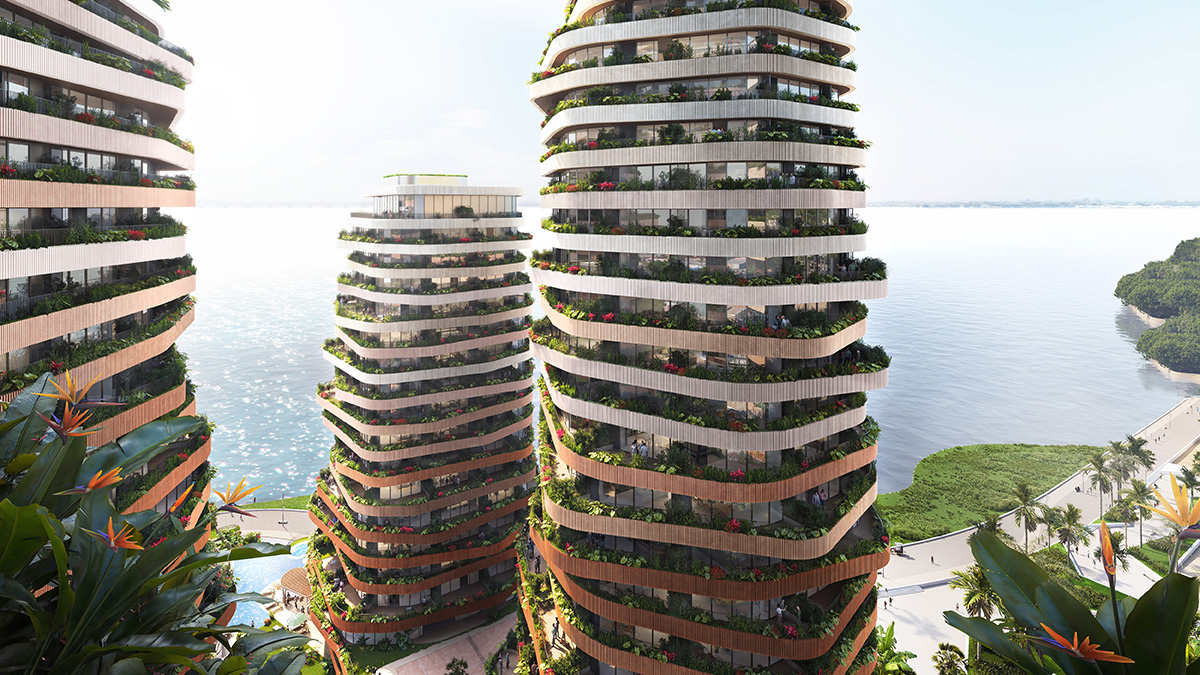 MVRDV has revealed design for a new residential project in Guayaquil, Ecuador.

Named The Hills, the project is located on the Guayas riverfront in Guayaquil and comprises six residential towers raised atop a mixed-use plinth that creates a lively, landscaped “valley” on its roof.

The 180,000-square-metre complex is a mixed-use residential complex, including retail and leisure units. The Hills MVRDV’s first project in South America. 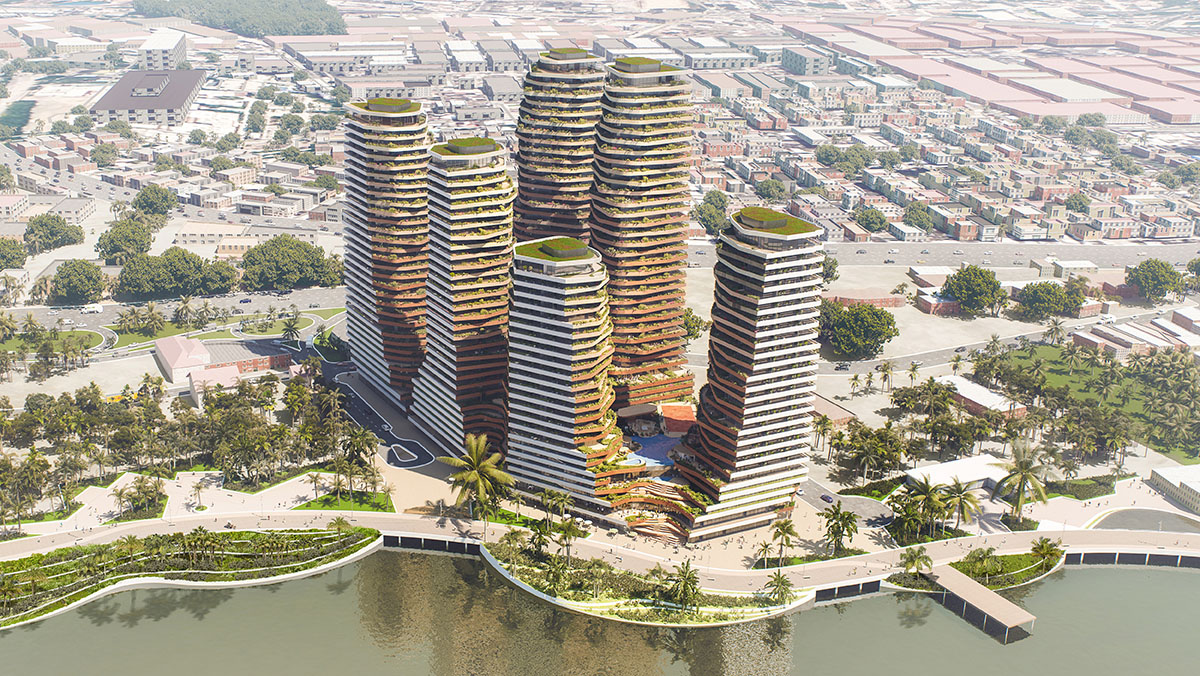 Featuring earth tones and flowing curved balconies, the design is inspired by the many juxtapositions found in Guayaquil itself – from the broad expanse of the river contrasted with nearby mountains, to the sight of modern high-rises on the shoreline set against the colourful hillside settlements of the Santa Ana hill.

Designed for Quito-based developer Uribe Schwarzkopf, the project is added as a dramatic new addition to the Guayaquil skyline. 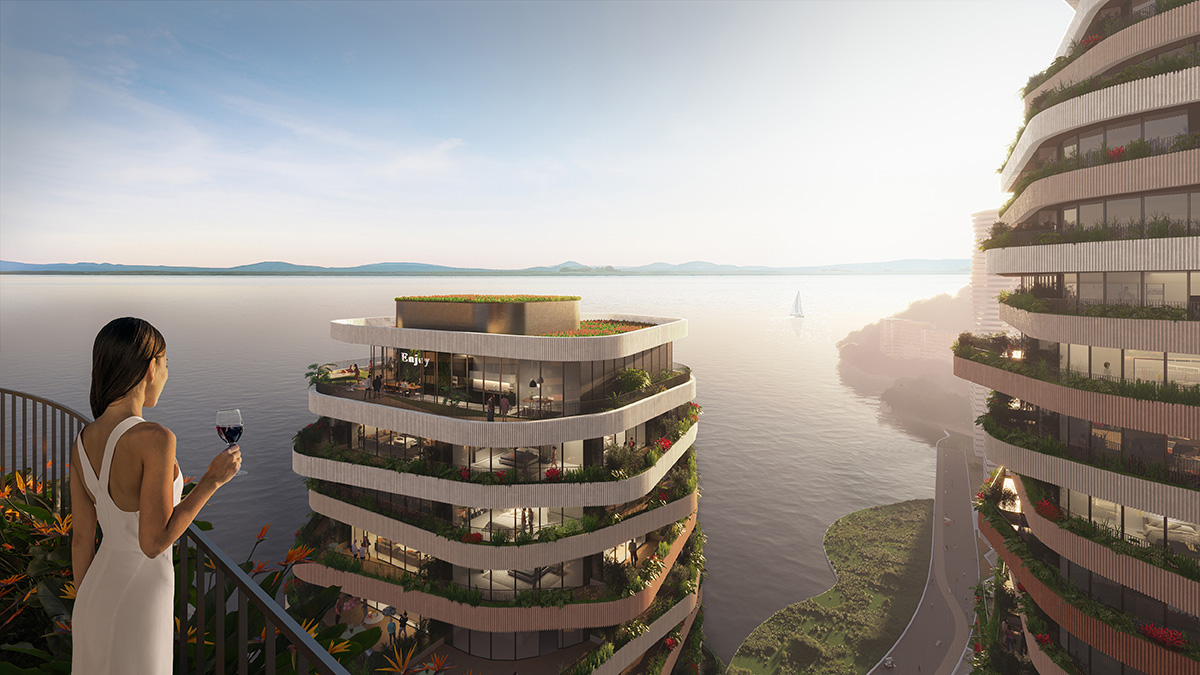 Situated in Puerto Santa Ana, the project is extending the boulevard that is gradually being consolidated along much of the city’s waterfront.

The heights of six residential towers range from 92 to 143 metres, rising taller as they step away from the riverfront, thus echoing the way the city ‘steps up’ from the waterfront to the hills behind.

The base that merges the towers together forms a terraced green valley and contains an oasis of pools, sports fields, and a large urban amphitheatre facing the riverfront, all surrounded by lush, natural vegetation.

Inside this base are shops, a large community clubhouse, and other amenities. 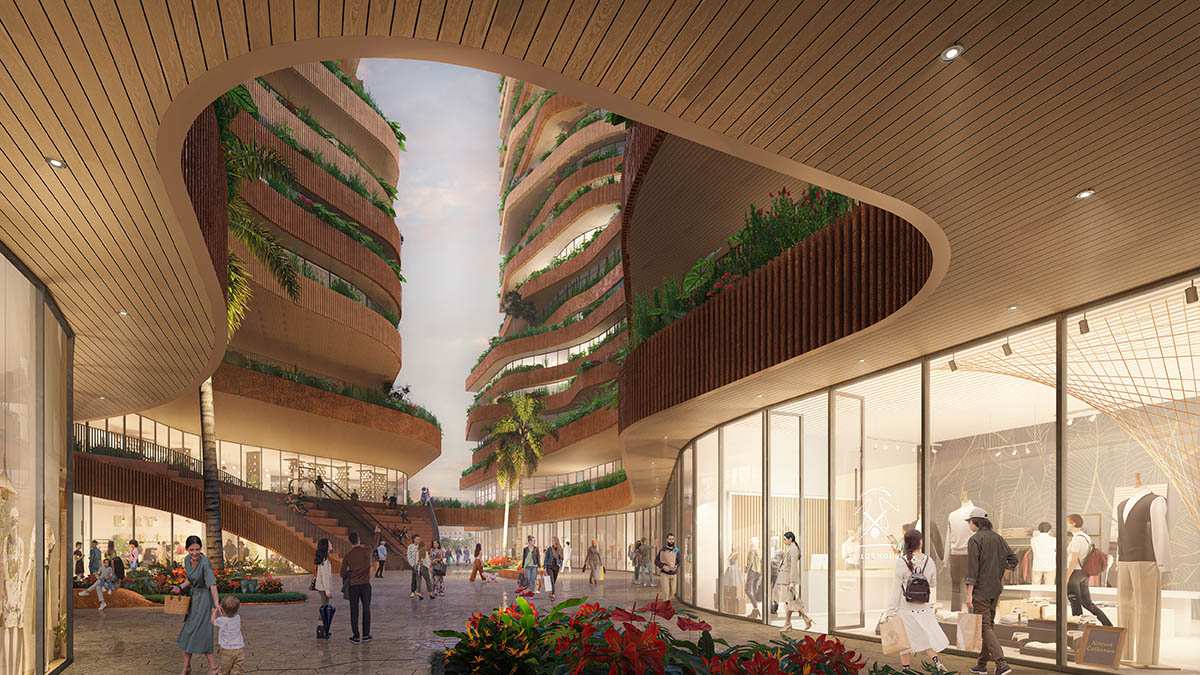 The studio creates a deeper "canyon" between the four towers located closest to the river and the two towers towards the city. This offers extra spaces for retail units, while creating a route for pedestrians to cross the site at ground level, also enabling the project to be built in two phases.

"The complex is almost a city in itself, with towers of different heights, so it’s a mini skyline – but it’s also part of a larger skyline along the promenade," said MVRDV founding partner Jacob van Rijs, co-founder of MVRDV. 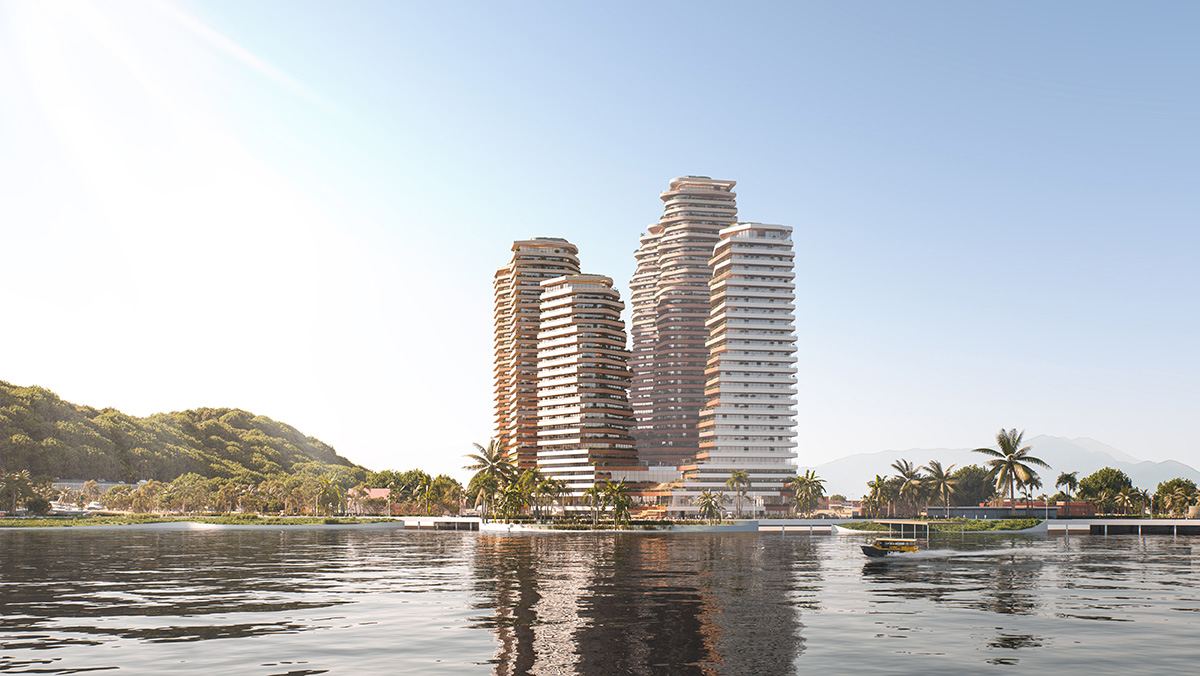 "It was important for us that the project was not just an island in the city, but that it offered access for others as well, that it would give something back in the form of a public plinth."

"So it’s a very exciting space for people to go to, somewhere that we hope people can meet with friends. At the same time, the balconies that characterise the towers offer space for greenery as well as protection from the sun and rain," Jacob van Rijs added. 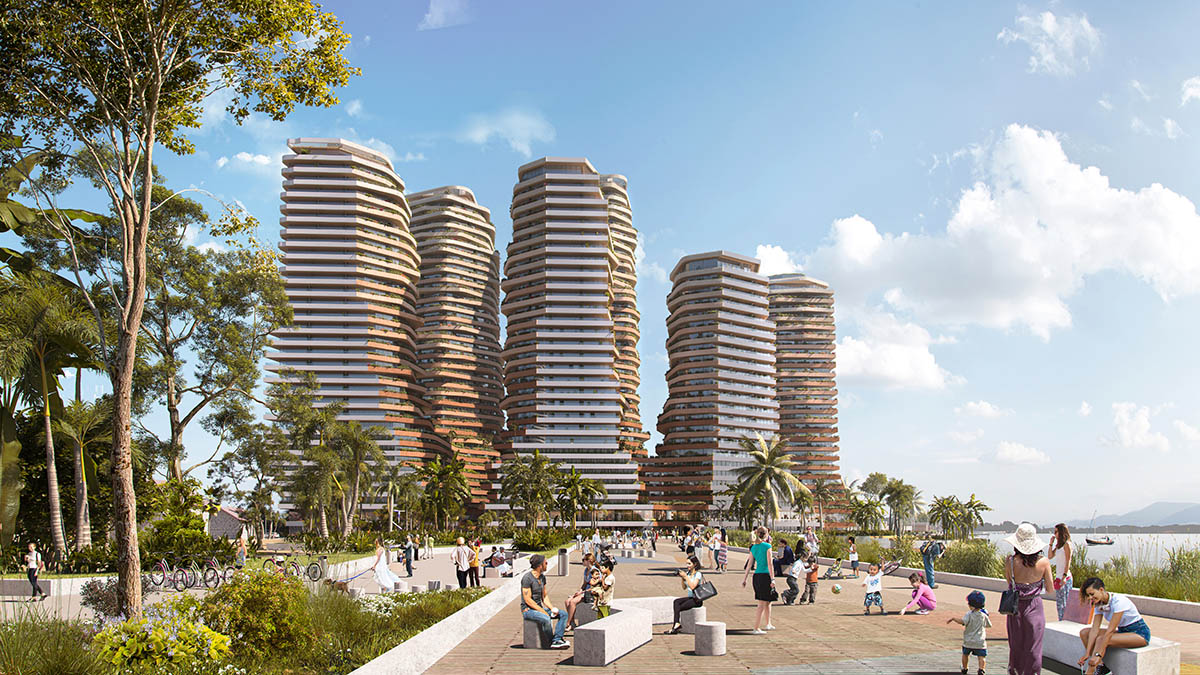 A different character of the development is provided by the façades facing the void between the towers.

The balconies are shaped by the straight lines and flowing curves that create irregular setbacks and overhangs.

The office, which uses earth tones at the lower levels as a material choice, gradually leaves it to lighter colors as it approaches the sky. On all levels, the studio adds a plenty of greenery in the balconies, extending the atmosphere of the central valley up to the top of the ‘hills’ that surround it. 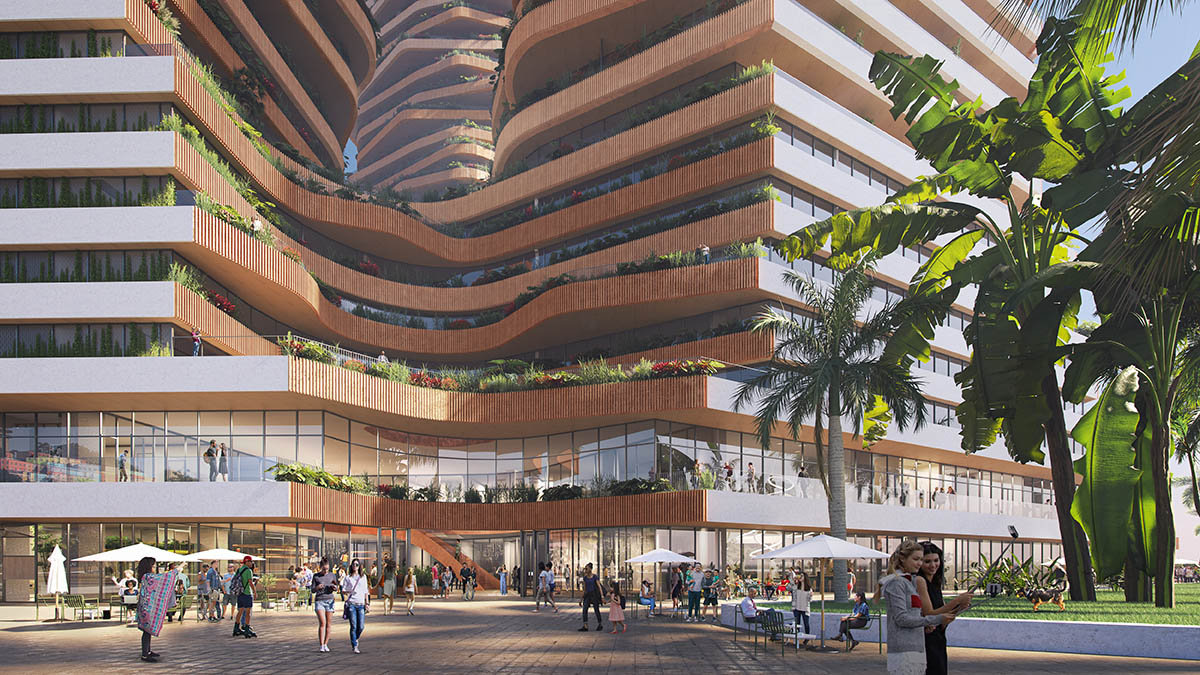 Guayaquil's warm climate allows the office to add these features to develop a sustainable response throughout the development.

For instance, the wide balconies shade the glass facade, while the positioning of the towers and the curved shapes help to improve ventilation, allowing breezes to flow across the site unimpeded.

The abundant greenery is aimed to cool the surroundings, reducing the amount of energy needed to cool the building and making the valley itself a comfortable, welcoming environment for both residents and visitors. 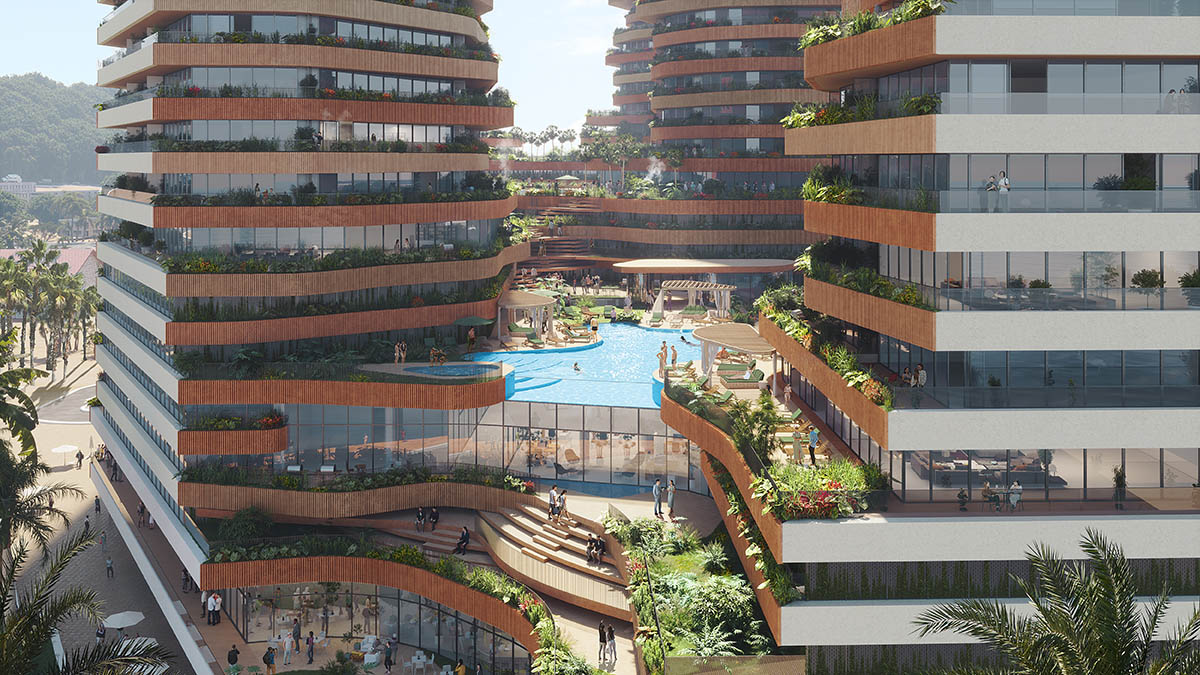 The building will provide a large part of the renewable energy to be used in common areas and residences from photovoltaics. In addition, the project will collect and store rainwater for irrigation use in the gardens, while LED lighting and heat pumps reduce the overall carbon footprint of the development.

Inside the towers, The Hills offers a wide selection of apartment sizes and types, offering everything from small apartments for individuals to apartments for families. Along with an abundance of amenities, The Hills features a vibrant public program, and plentiful retail options, ensuring that the building will be used throughout the day by a diverse group of residents and visitors – making the building a dynamic and exciting new destination in Guayaquil. 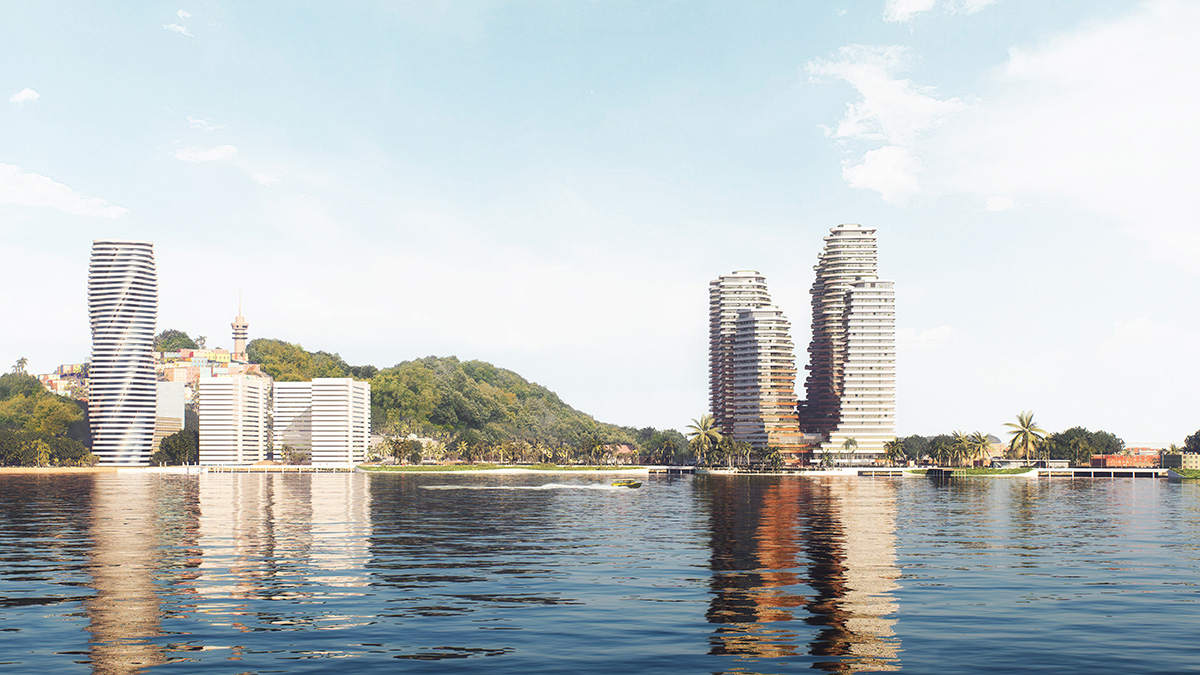 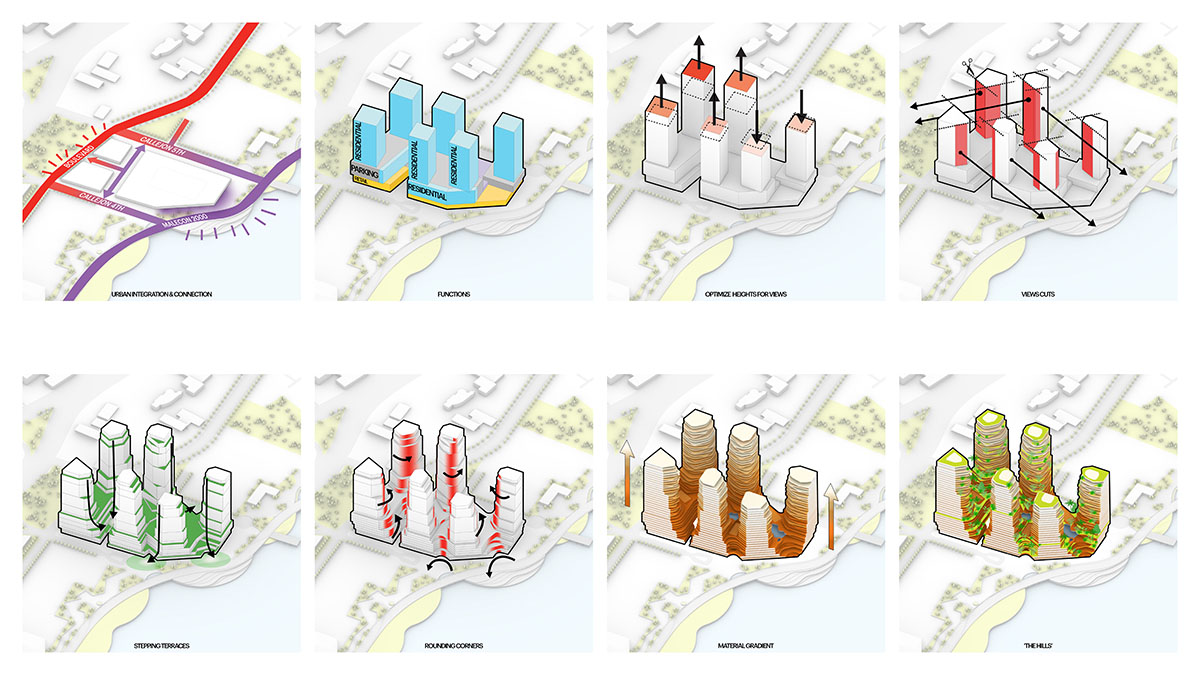 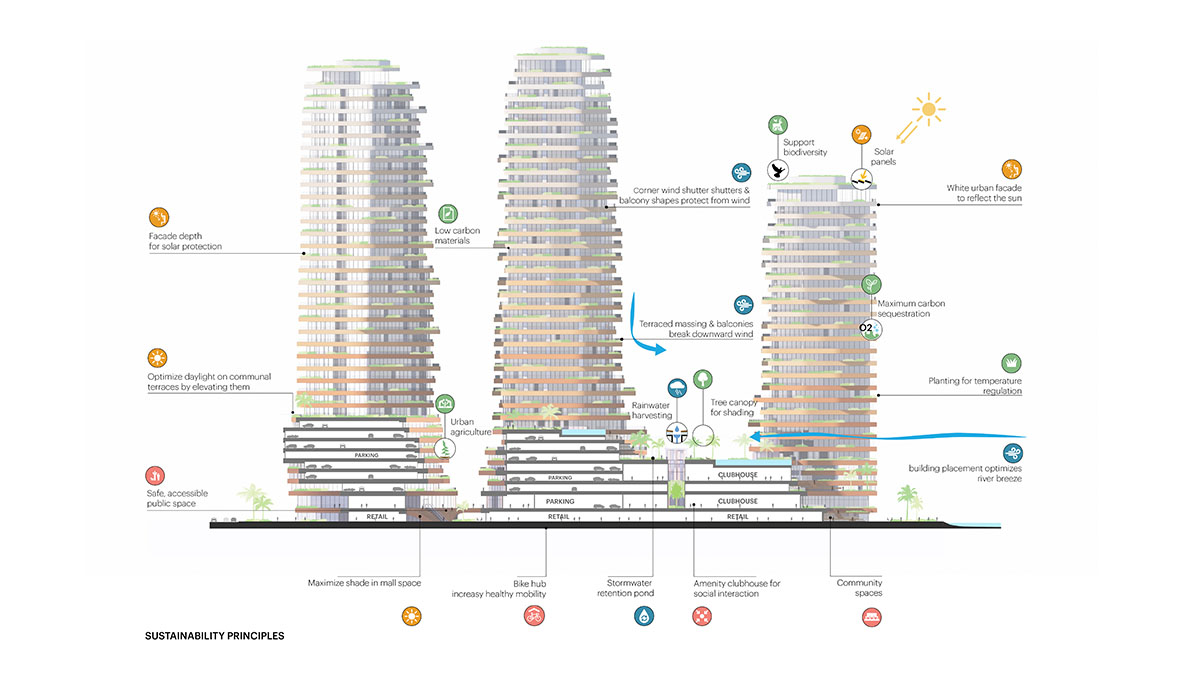 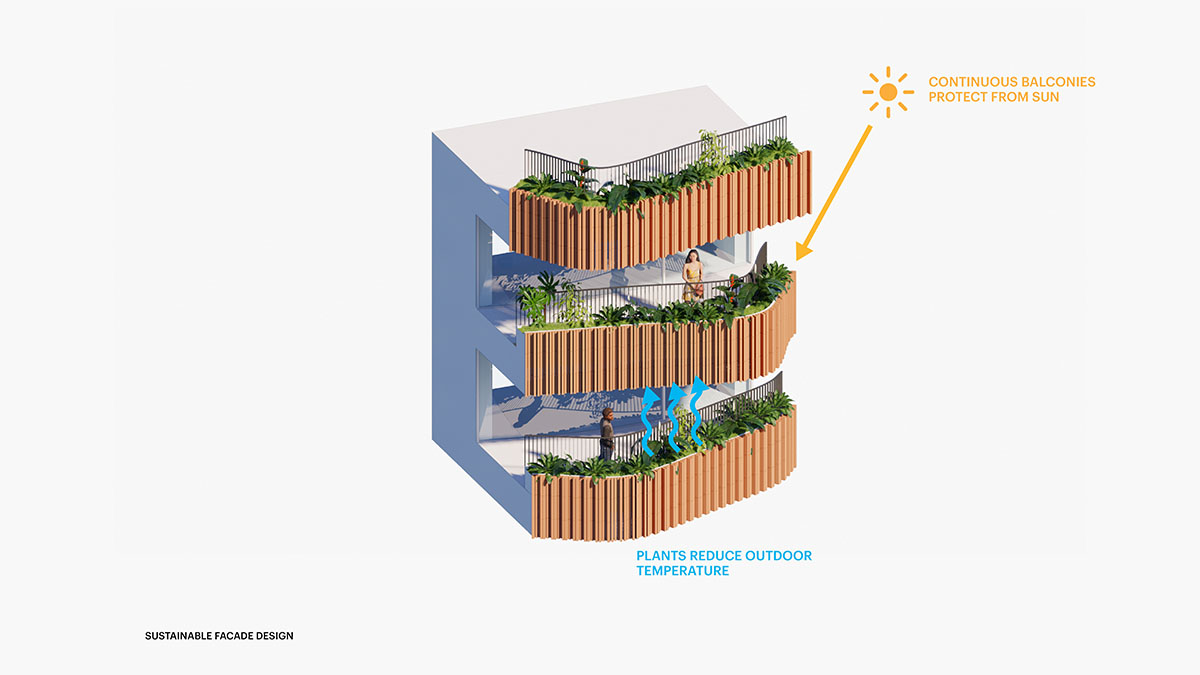 MVRDV opened The Podium, a pink-colored stage allows to experience the roof of Het Nieuwe Instituut. MVRDV and Rotterdam Rooftop Days also designed a 600-metre-long aerial bridge that lead visitors on different rooftops of the city in Rotterdam.

A research-based and highly collaborative design method engages experts from all fields, clients and stakeholders in the creative process.