MVRDV opens The Podium, a pink-colored stage allows to experience the roof of Het Nieuwe Instituut 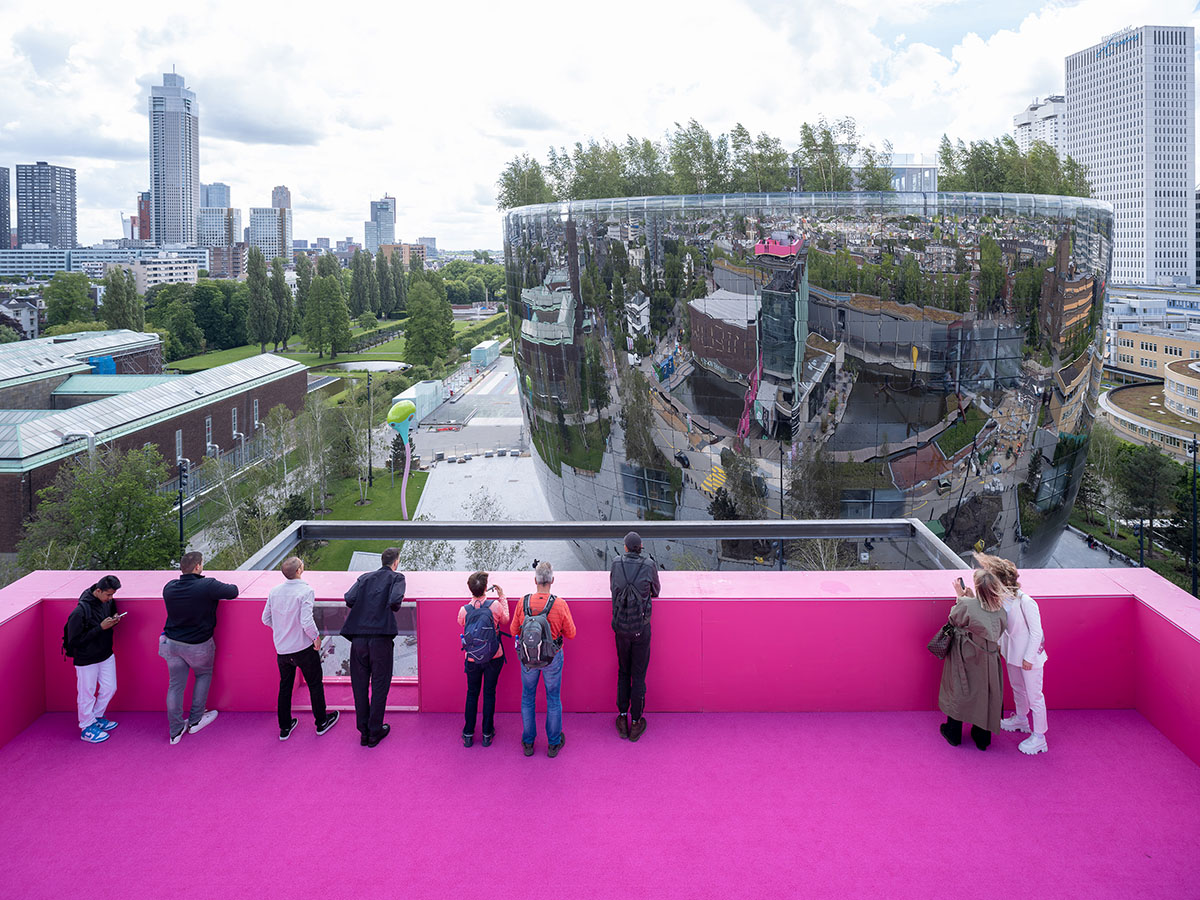 MVRDV has completed a pink-colored urban staircase and stage on the roof of Het Nieuwe Instituut in Rotterdam, the Netherlands.

Named The Podium, the 29-metre-high platform allows the public to experience the roof Het Nieuwe Instituut, a cultural centre whose General and Artistic Director is Aric Chen.

The Podium has officially been opened to the public on yesterday, with the mayor of Rotterdam Ahmed Aboutaleb in a ceremony at Het Nieuwe Instituut.

Visitors will climb to the roof of Het Nieuwe Instituut via a 143-step external staircase and look out over the city at a height of 29 metres until 17 August 2022. 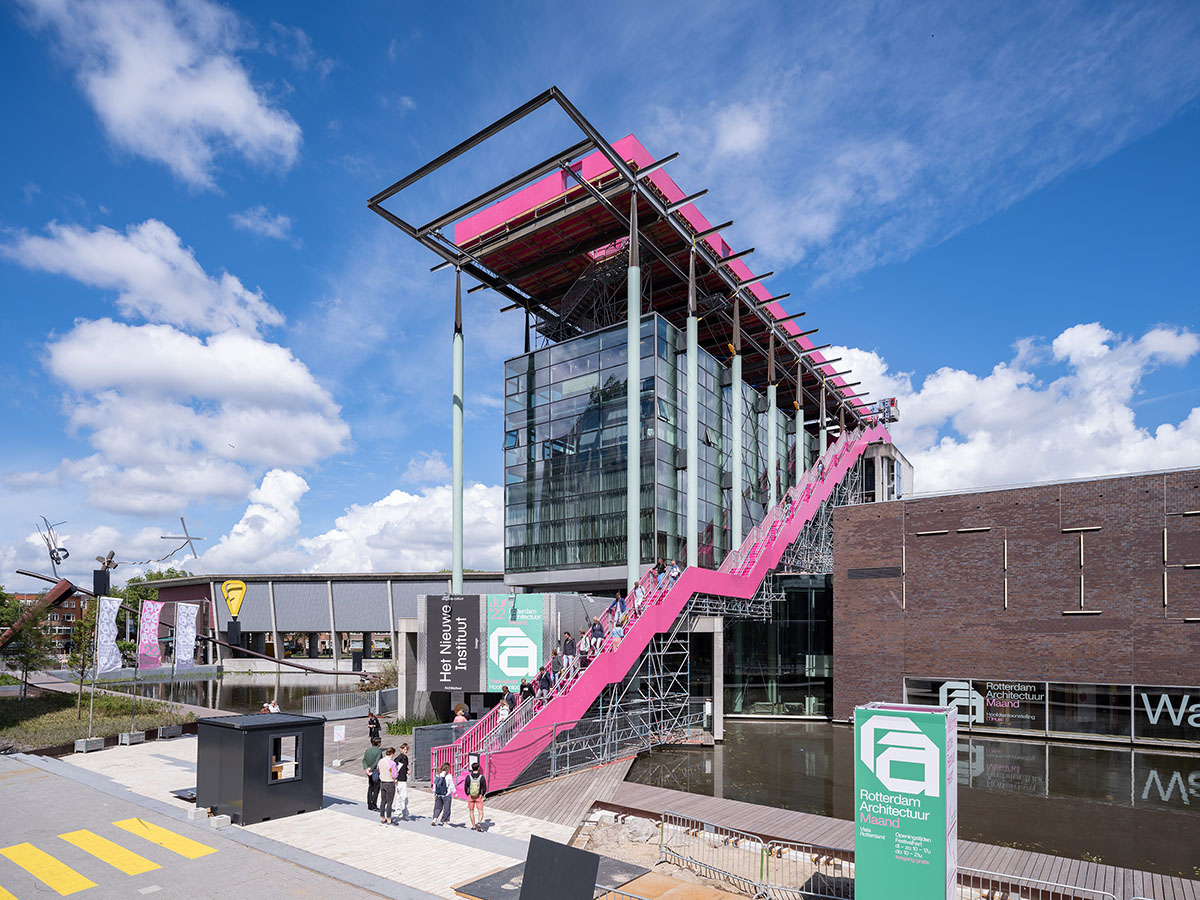 Downstairs in Het Nieuwe Instituut, there is the main exhibition (T)Huis (House/Home), designed by Namelok, can also be visited. 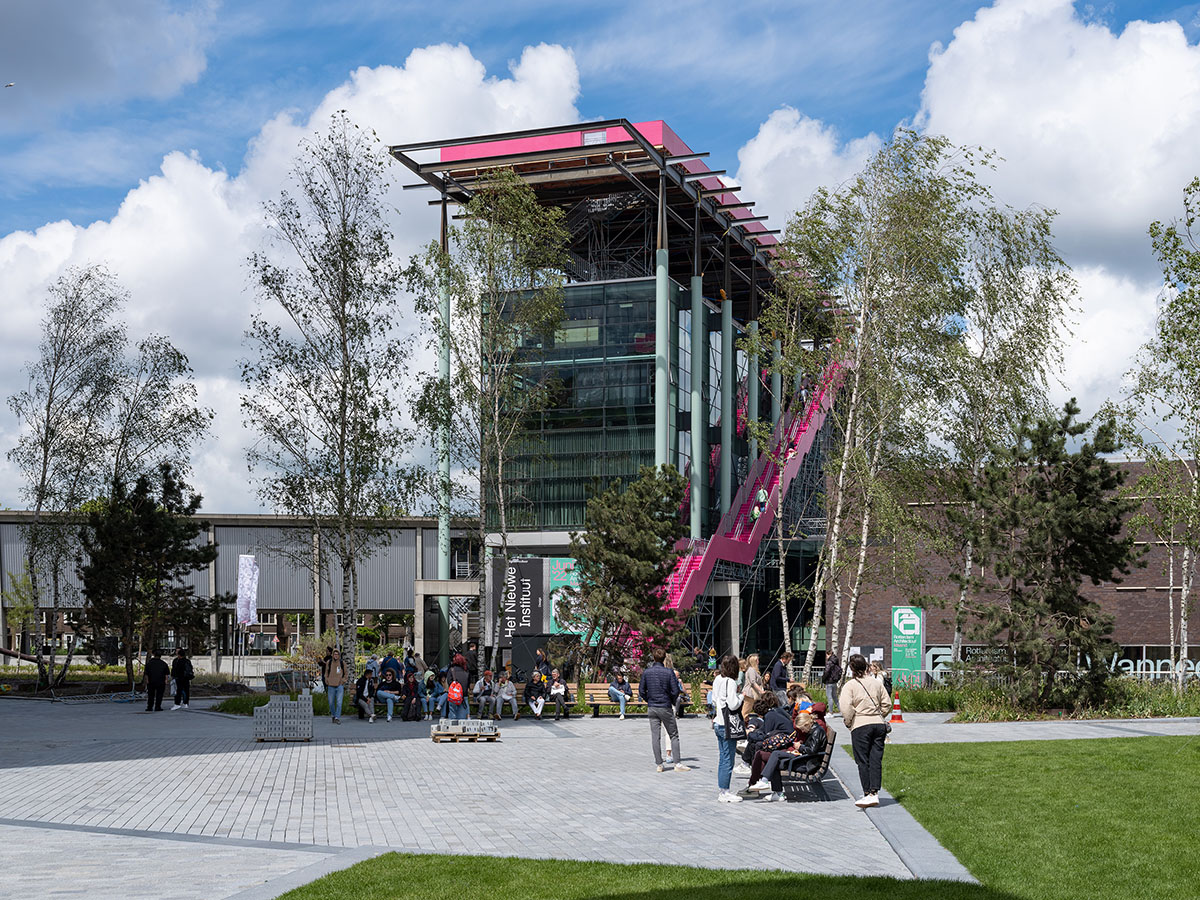 The Podium is painted with a striking pink to increase visibility, MVRDV’s design creates a 600-square-metre temporary meeting place that will form the heart of the Rotterdam Architecture Month throughout June.

In July and August, The Podium will become the place to be for a jazz concert or yoga class with a view of the city. Various activities will also take place for the children of Rotterdam, including a summer camp. 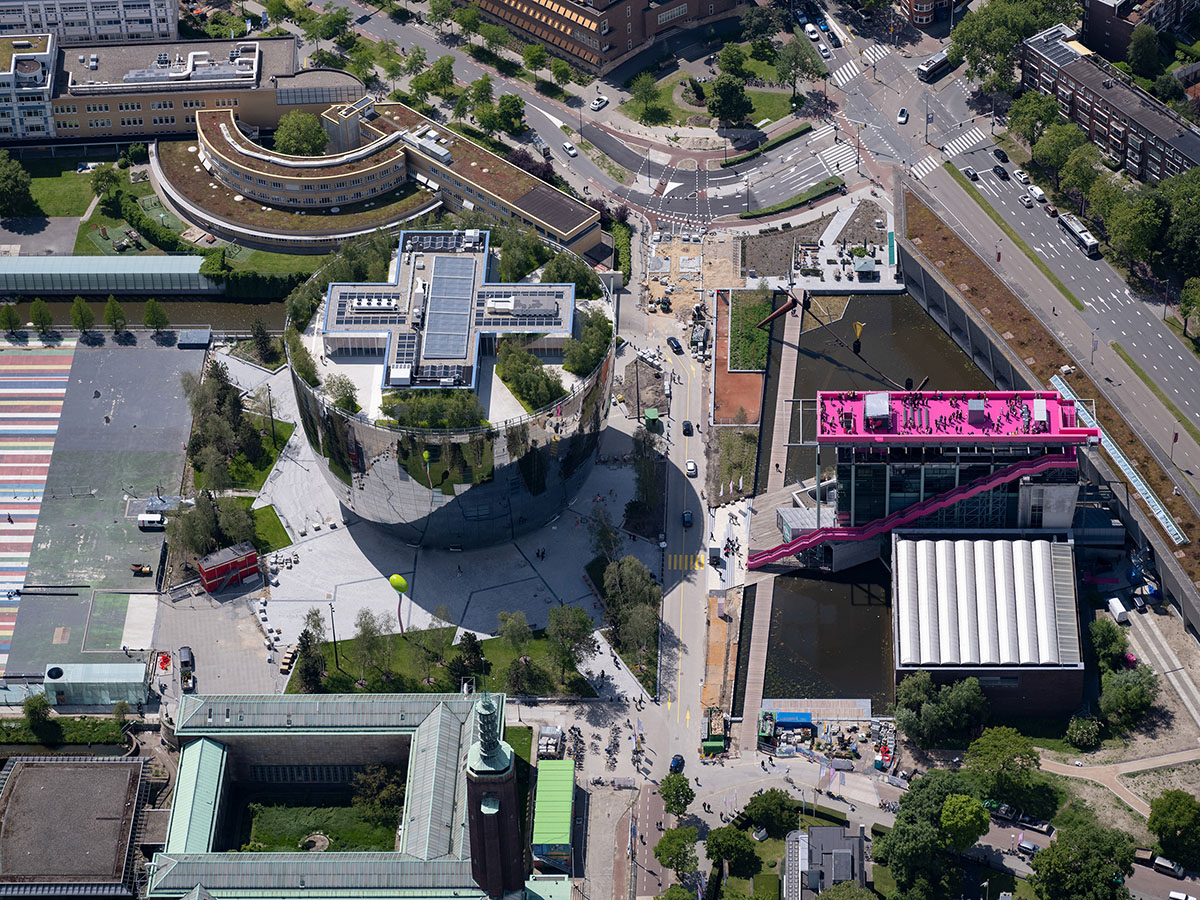 The commission to design a temporary installation arose from a desire to draw further attention to MVRDVHNI: The Living Archive of a Studio, an exhibition of MVRDV’s work currently on show in the top floor of HNI.

Due to work being conducted on the public space outside the museum, the main entrance of Het Nieuwe Instituut is currently less visible and accessible, so the MVRDV design team came up with the idea to create an alternative access route via a large outdoor staircase. 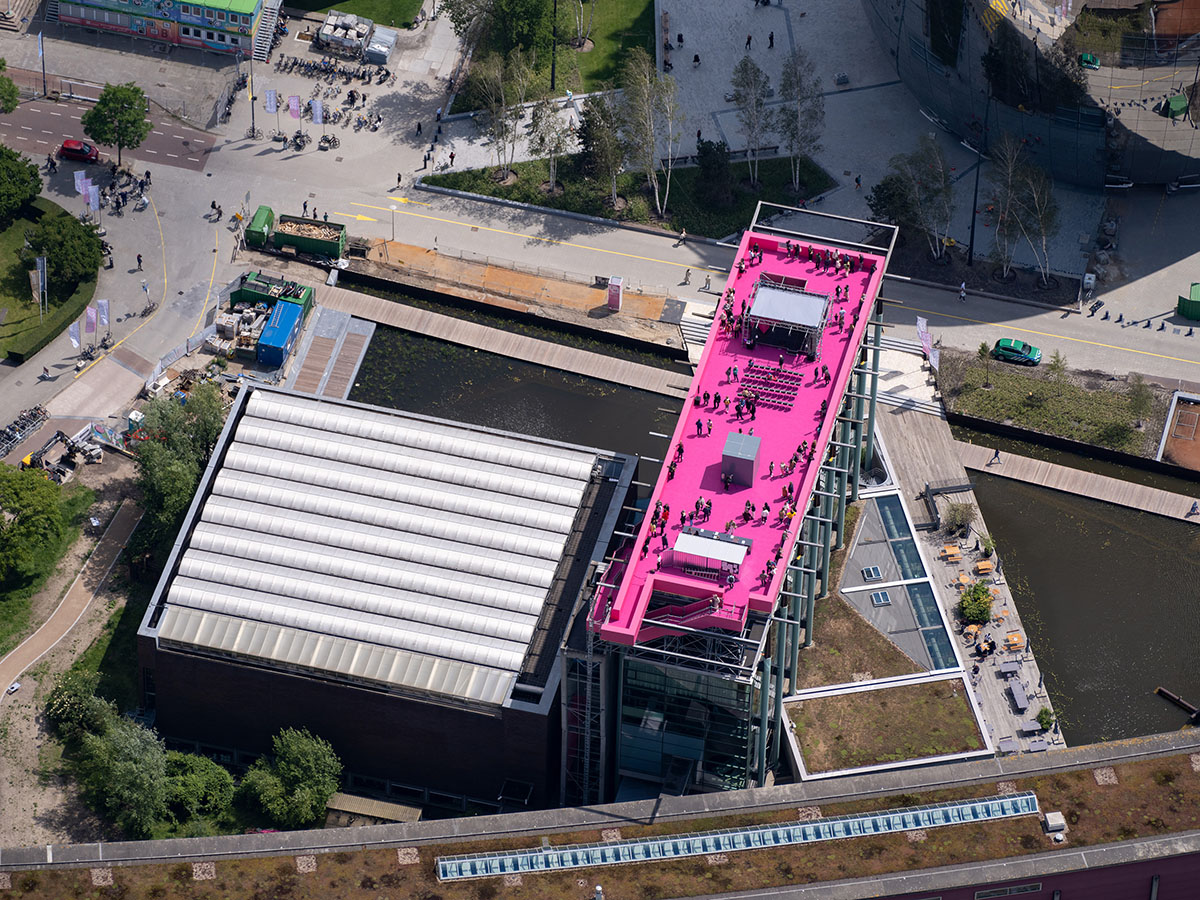 MVRDV was inspired by the panoramic view from the roof of Het Nieuwe Instituut, and by the building’s design by Jo Coenen, with its characteristic pergola.

The studio aimed to design The Podium as sustainably as possible, by using scaffolding material and recyclable floor finishes - which were the main materials. 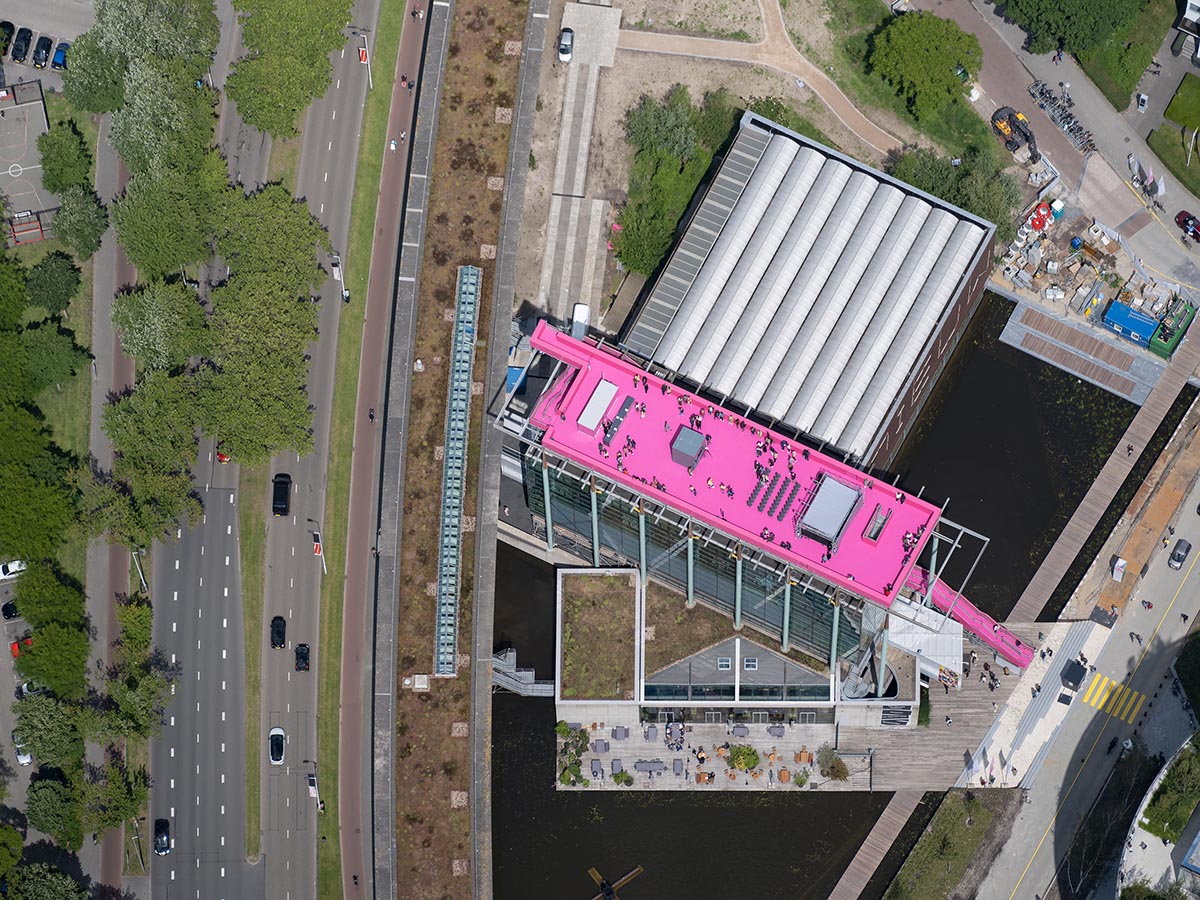 The Podium is both accessible via the outside staircase and via the exhibition in the floor below. For visitors who cannot use the stairs, The Podium is accessible by elevator or via the internal access of Het Nieuwe Instituut.

In the month of June, the Podium becomes a key part of Rotterdam Architecture Month. Thanks to the view over various iconic buildings in Rotterdam, including the Depot Boijmans Van Beuningen designed by MVRDV, The Podium displays the qualities of Rotterdam as an architectural city. 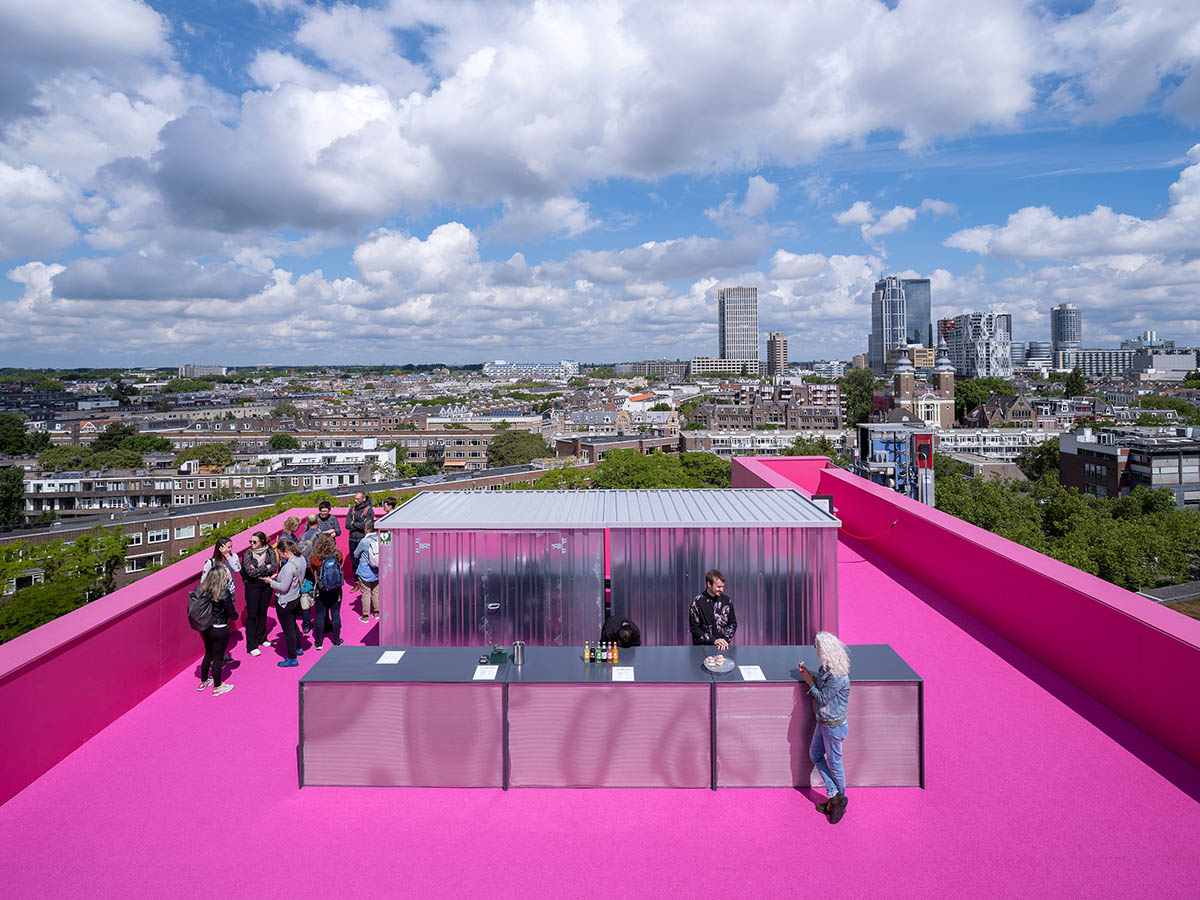 In July and August, various partners will organise activities at The Podium, including Motel Mozaïque, the NN North Sea Jazz Festival, Operator, Roffa Mon Amour, and the Rotterdam Philharmonic Orchestra. "The installation fits with a tradition that MVRDV has built up in the programming of the rooftop landscape," said architect Gijs Rikken, associate design director at MVRDV.

"In Rotterdam it started in 2006 with the blue rooftop extension Didden Village, followed by the Stairs to Kriterion in 2016. This year we will enhance the rooftops with the orange Rooftop Walk and the pink Podium."

"We want to bring more attention to this second layer of the city with colour and special installations: if we make it greener, more sustainable, and more connected, the city will become more liveable for everyone," Rikken added. Last week, on Ascension Day, MVRDV also opened another high-level installation, the Rotterdam Rooftop Walk, opened. For a small fee, visitors can stroll on an orange carpet over various roofs, with the highlight of the walk being a bridge spanning the Coolsingel.

The Rooftop Walk is an initiative of the Rotterdamse Dakendagen and was designed in collaboration with MVRDV. The installation will be on display until June 24 and was already sold out this weekend. The extensive programming on the carpet should make visitors more aware of what is possible on roofs: from a platform for drones that deliver parcels, thus reducing traffic jams, to rooftop gardens and various solutions for water storage, to a small village. 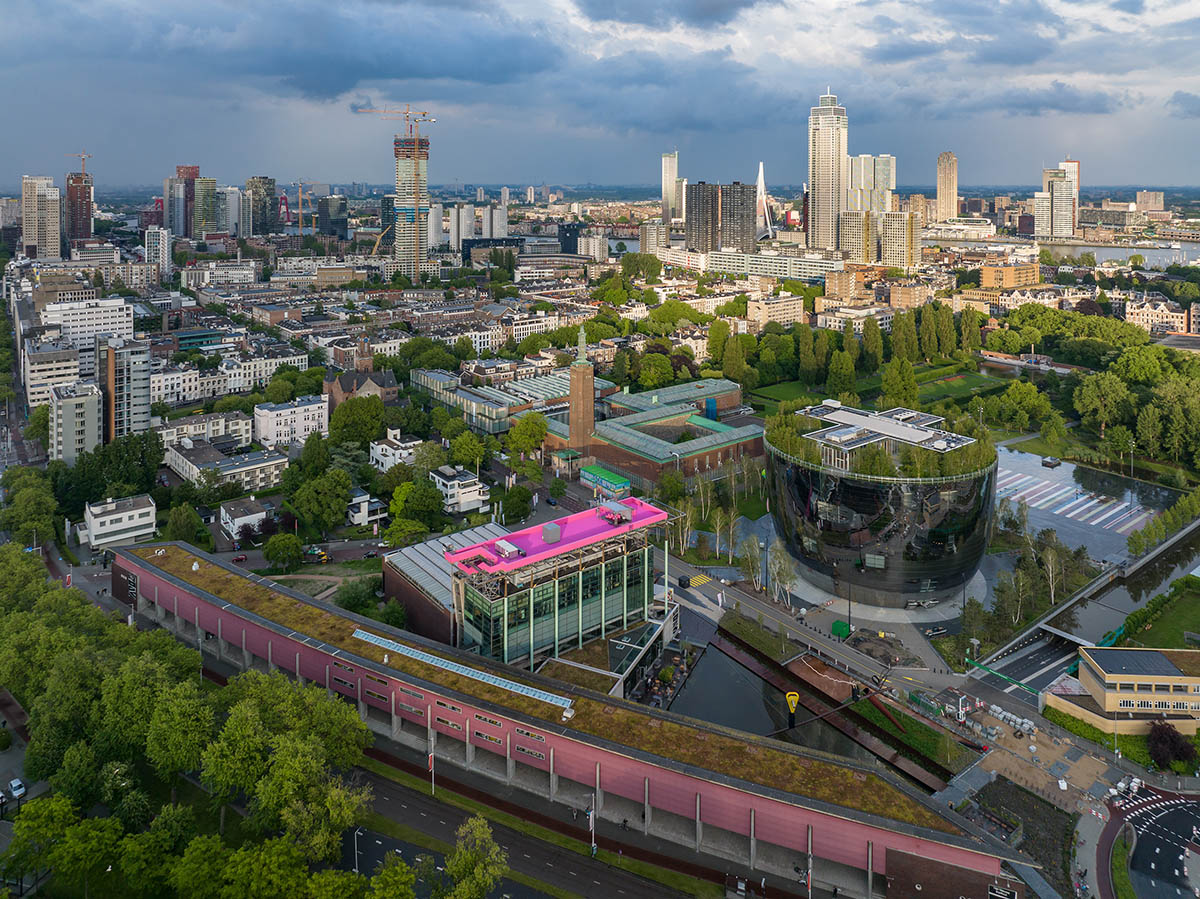 For a visit to The Podium from 1 July to 17 August, a one-time entrance is fee for €3. After June, The Podium is free to enter, according to Het Nieuwe Instituut's website. To visit The Podium, reserving a time slot is necessary via the website.

More information about the more than 100 architecture events to enjoy during RA Month can be found the website.

MVRDV first revealed images for The Podium in March 2022.