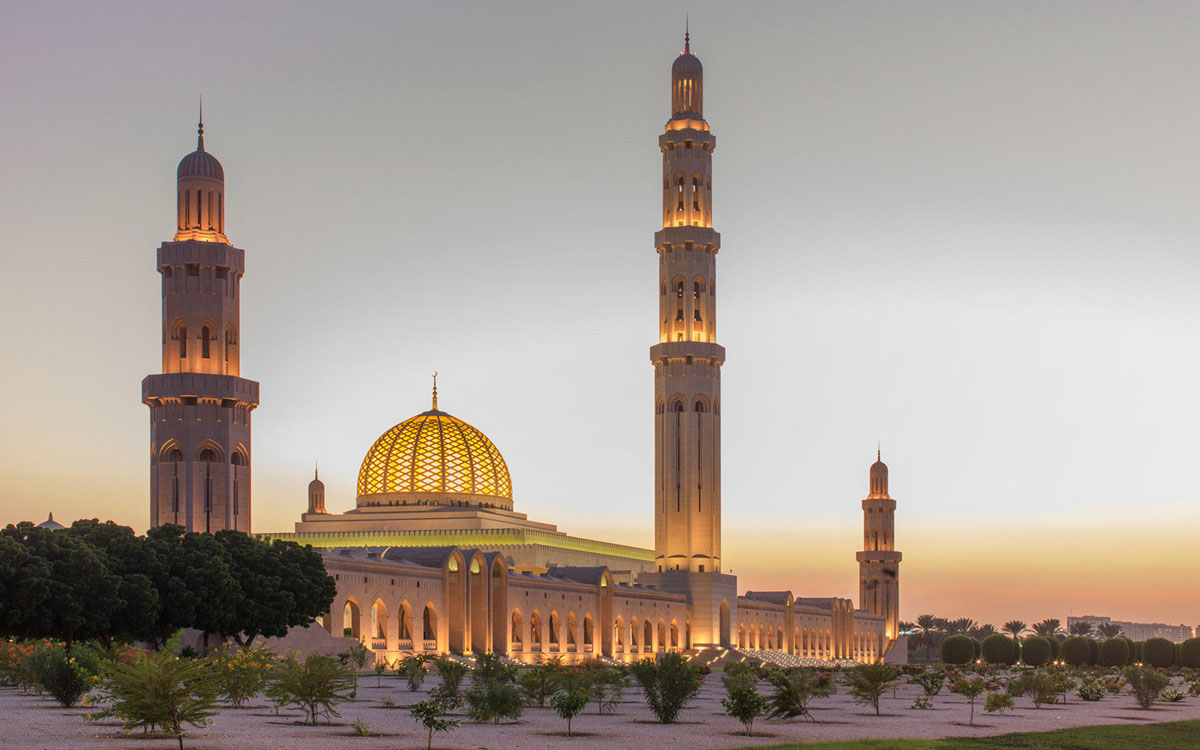 The full name of this magnificent iconic structure is the "Sultan Qaboos Grand Mosque", which dominates the skyline of Muscat. The mosque is square in shape which surrounds the central dome with a total height of 50 meters. The 5 minarets define the limits of the site representing the 5 pillars of Islam. The main minaret is 91.5 meters tall and the others reach up to 45 meters.

The total site area of the mosque is 416,000 square metres (102 acres) and the complex extends to cover an area of 40,000 square metres. This Grand Mosque was inaugurated by Sultan of Oman in the year 2001 to celebrate the 30 years of the Sultan's reign.

Astonishing facts of its Design, Interiors and Architecture which will make anyone to visit the Grand Mosque of Muscat.

Sultan Qaboos Grand Mosque in Muscat is one of the most beautiful and extravagant modern mosques in the world. This grand iconic structure in the Arab world took six years to build. The mosque features a blend of Islamic, Middle Eastern, and Omani architectural styles. Despite these things there are few astonishing facts regarding its design, interiors and Architecture that will make anyone to visit this Mosque.

When it opened for public, the mosque used to have the world’s largest chandelier. The chandelier is located in the centre of the men’s prayer hall and measures a staggering 14 meters and weighs 8,500 kilograms. It holds around six hundred thousand shining bright Swarovski crystals, with 24 carat gold plating which took more than four years to complete. 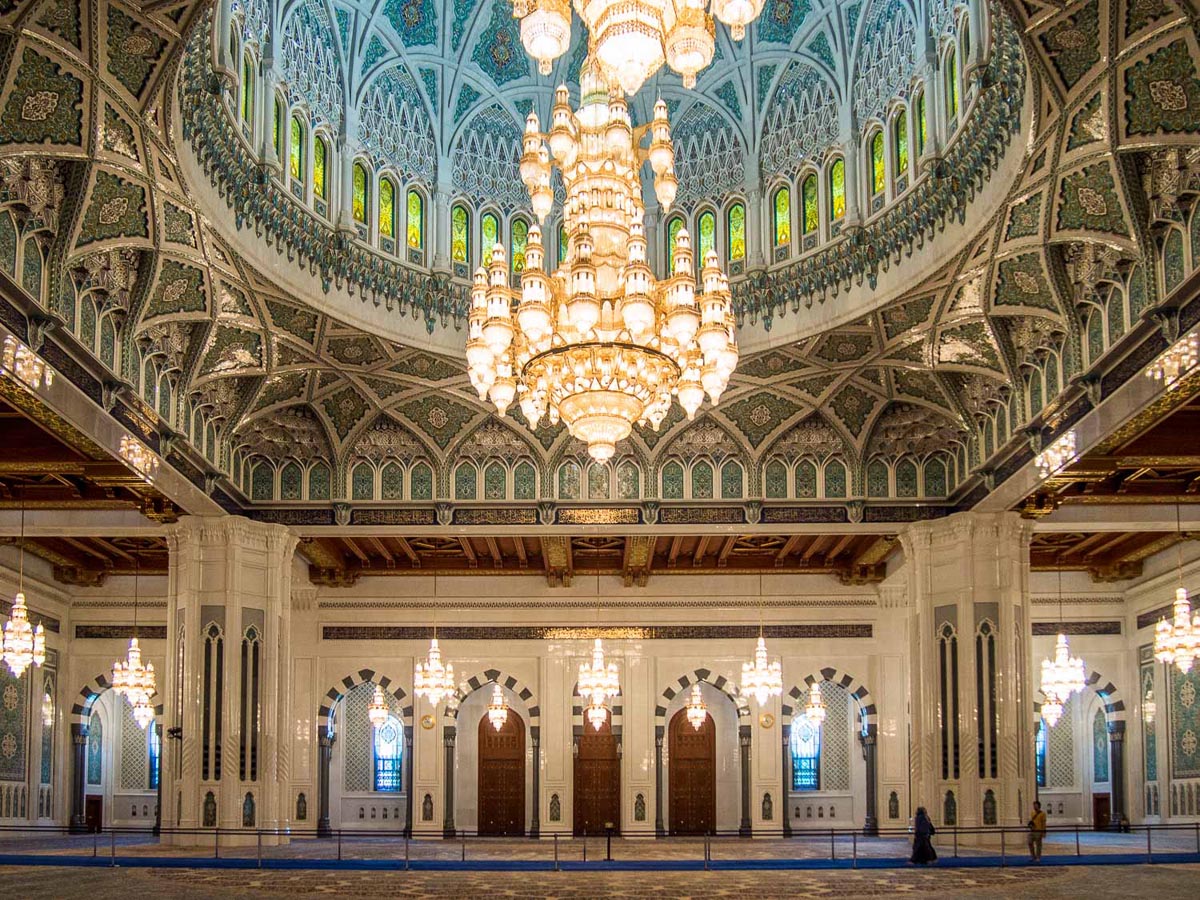 When it opened for public, the mosque used to have the world’s largest single piece carpet, which is now the second largest single piece carpet in the world. The carpet is one of the major features of the design of the interior which covers around 4,343 square meter area of the prayer hall. It contains, 1,700 million knots, measuring around 60x70 meters, weighs around 21,000 kilograms and took around four years to produce, and brings together the classical Persian, Isfahan and Kashan (cities in Iran) design traditions. This hand-woven carpet was produced by Iran Carpet Company (ICC). 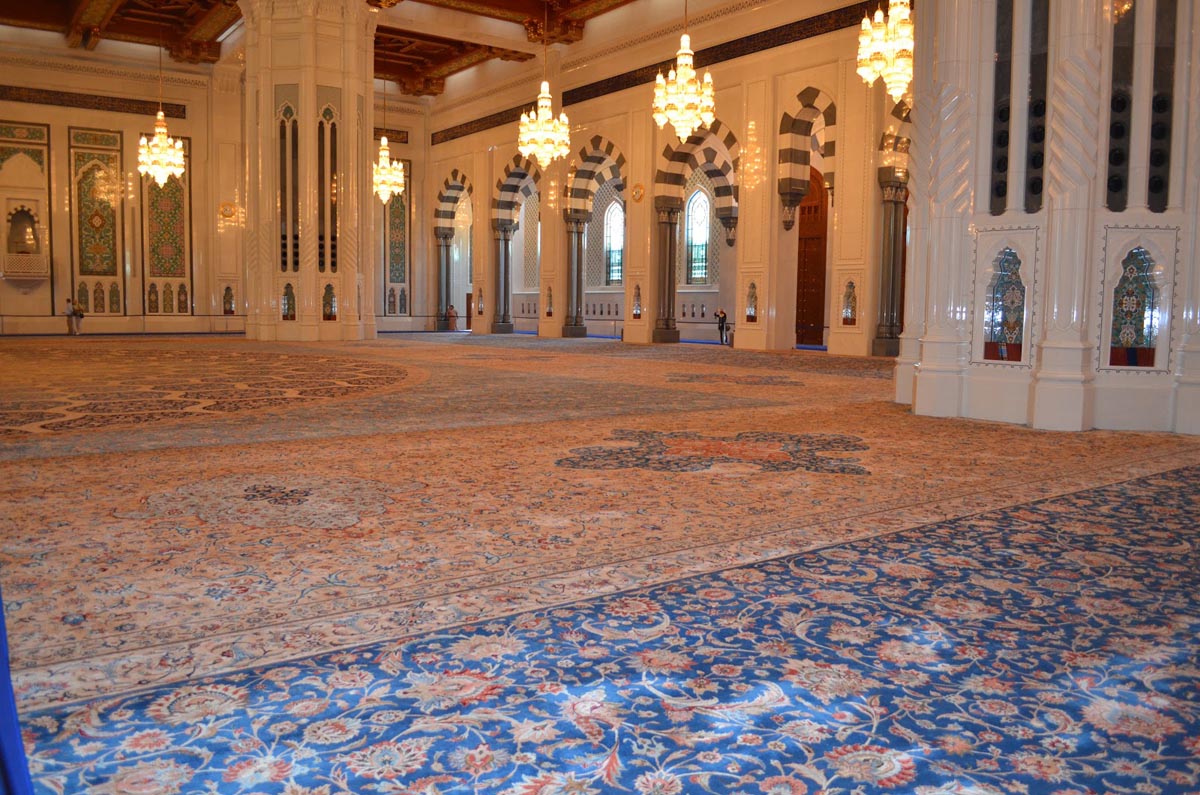 The Grand Mosque is embellished in beautiful, colourful mosaic patterns. There is no official number for how much stones have been used, but surely it is an amazing and impressive sight. Walk inside the halls is important to see the handcrafted details of the mosque. It is truly a one-of-a-kind piece of interiors art. 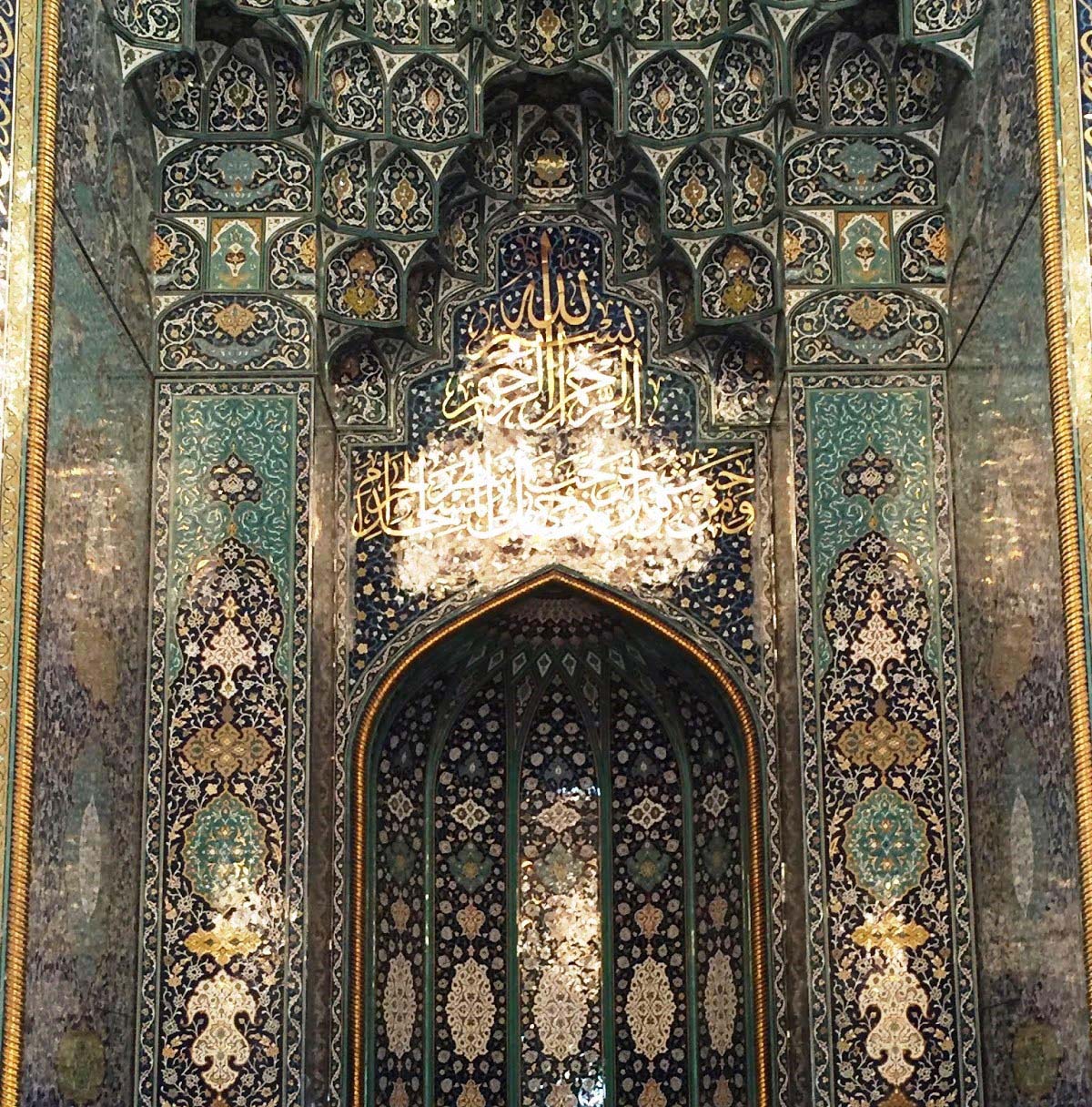 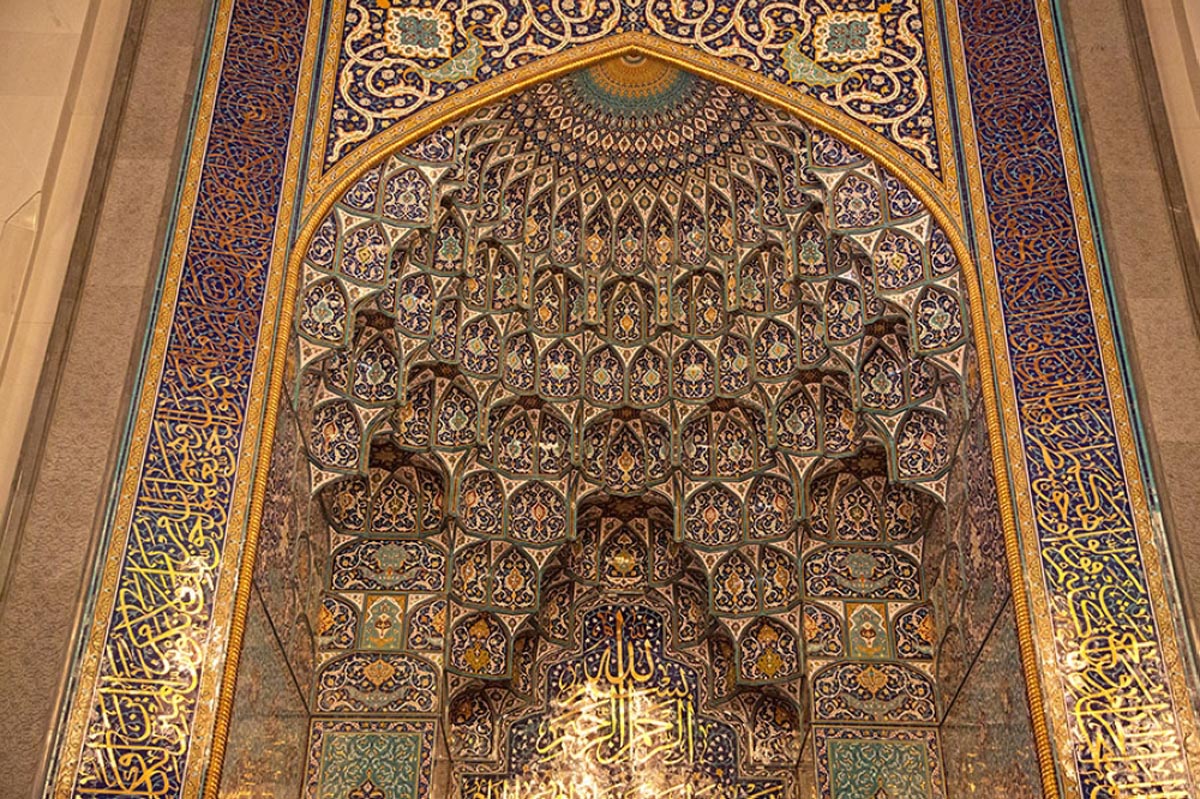 Quietly imposing from the outside and inside, this mosque is a glorious piece of modern Islamic architecture. 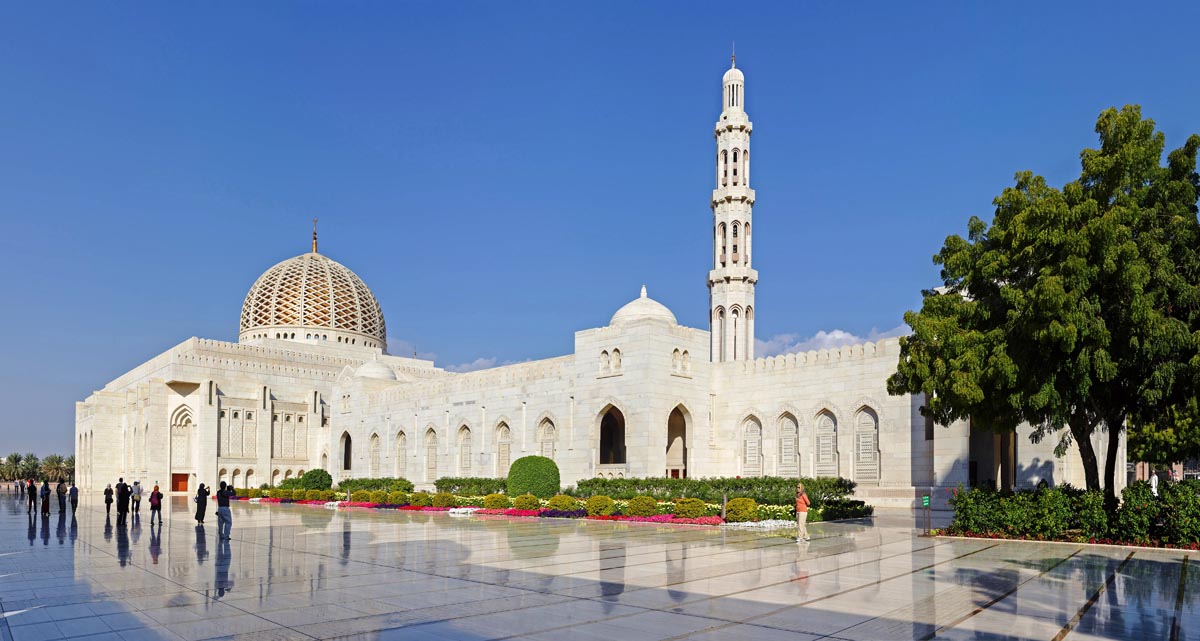 If you visit the Sultan Qaboos Grand Mosque someday, do not miss to see the library and walking around the outer corridor along the mosque which features a variety of mosaics artworks and explanations of the different design styles uses. 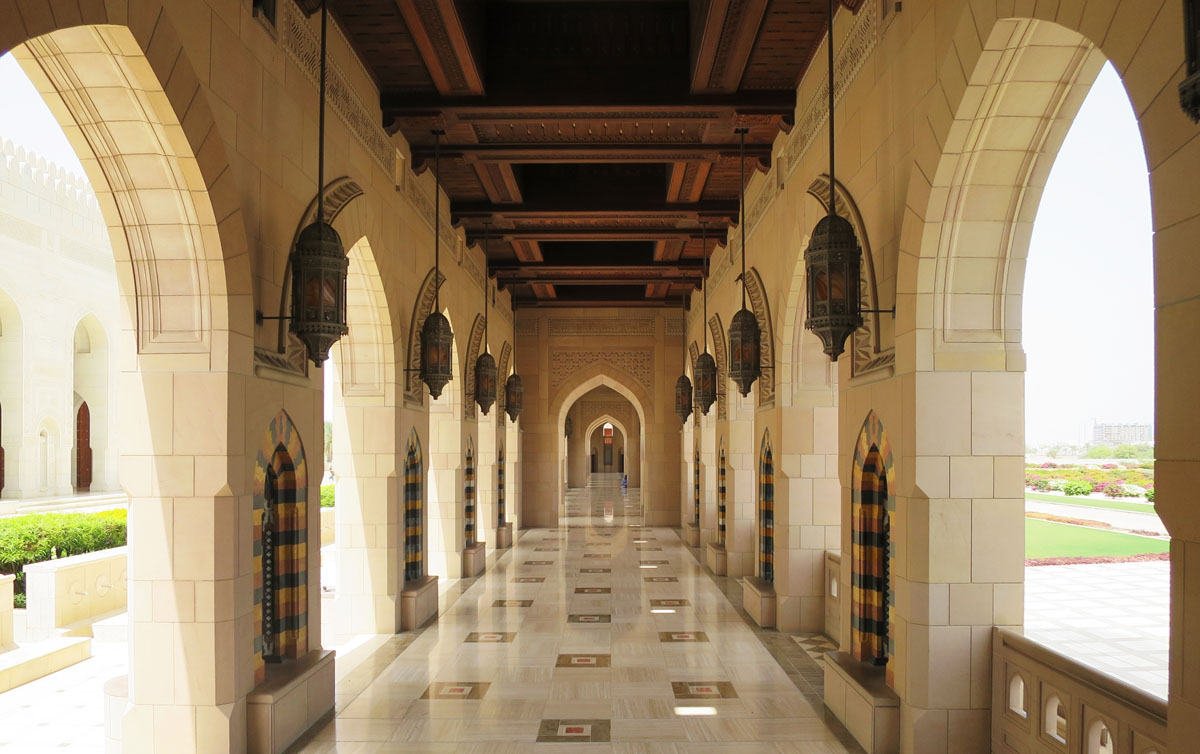 Corridor along the mosque. Image © tripadvisor

6. Beautiful mosaics and ceilings throughout the mosque

There are numbers of beautiful mosaics and art patterns throughout the mosque. Detailed carvings and its uniqueness is a must watch. Inside the mosque the timbered panels reflect the architecture of traditional Omani ceilings. The whole Mosque is decorated in colourful and beautiful mosaic patterns. 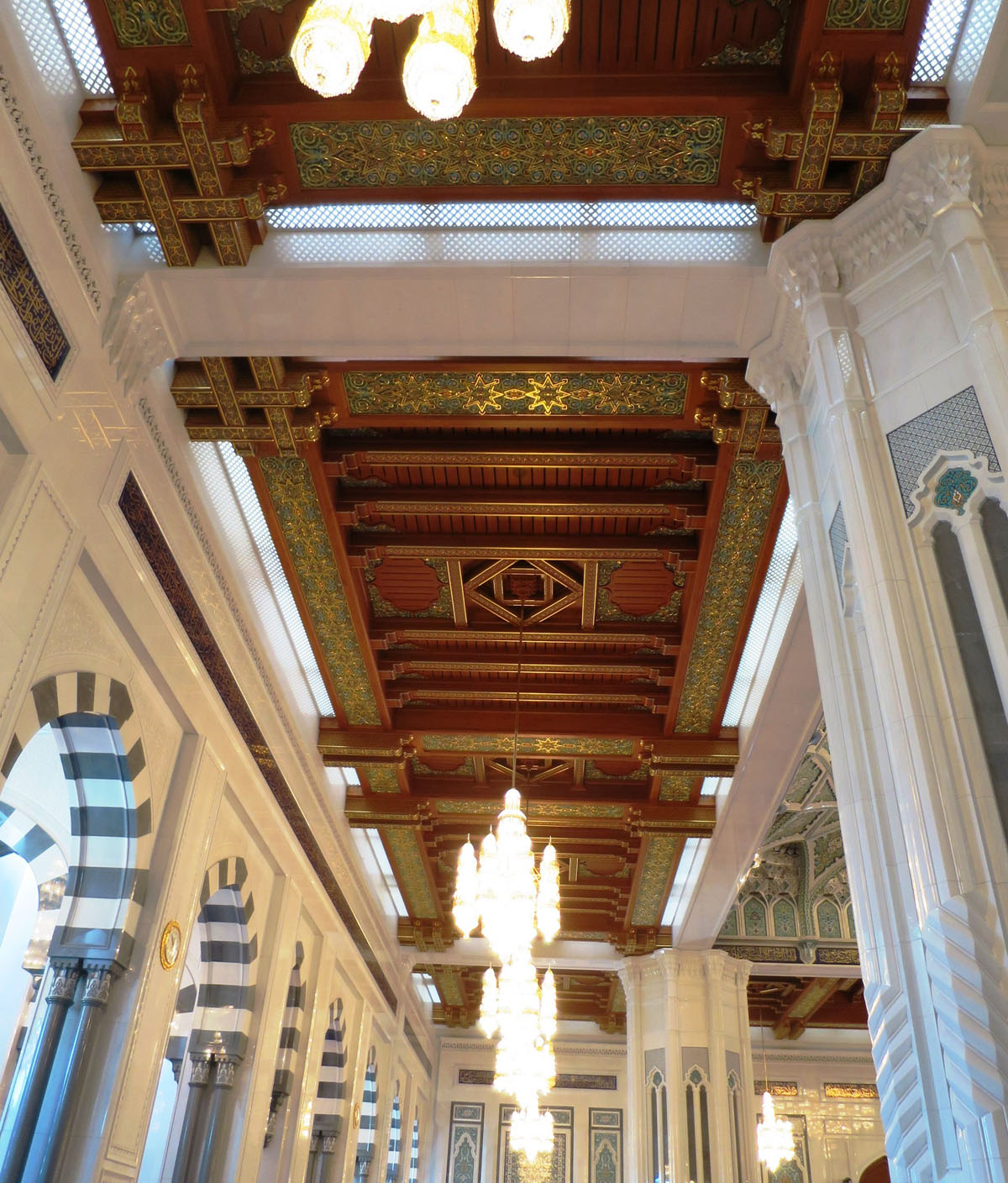 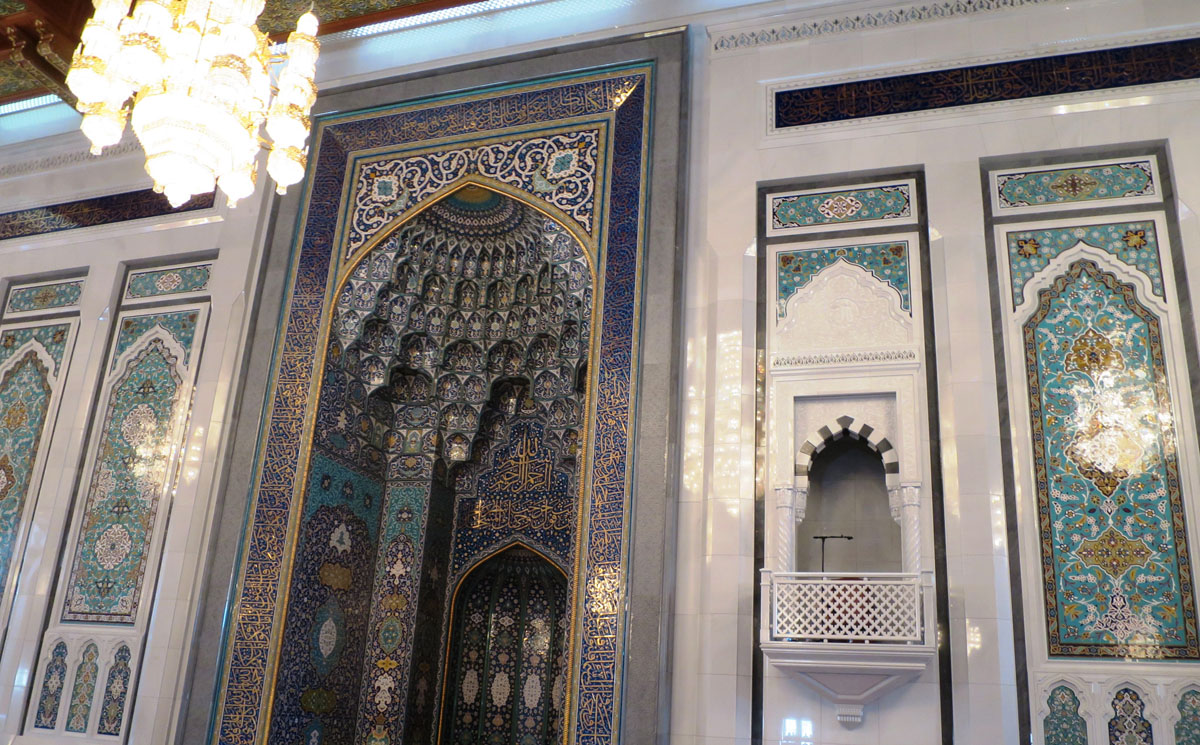 The mosque is surrounded by beautiful and well maintained gardens. Inside the surrounding walls of the mosque there are more gardens and long magnificent walkways. It feels like a perfect way of designer/architect to protect the mosque from the noise of the city. 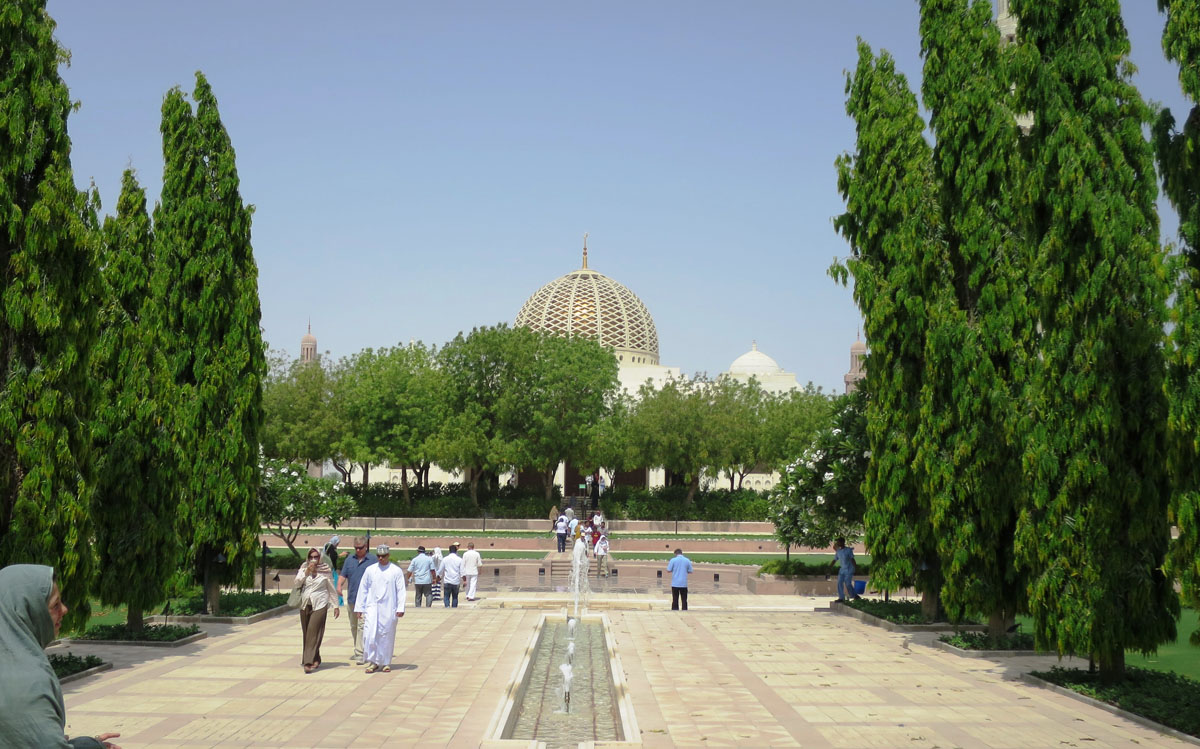 Beautiful and well maintained garden inside the mosque. Image © alamy

In 2015, the Sultan Qaboos Grand Mosque features in the list of "The Telegraph", UK’s leading newspaper, as one of the 25 most beautiful mosques in the world. Sultan Qaboos Mosque is a must visit Iconic Architectural wonder in Muscat, Oman.