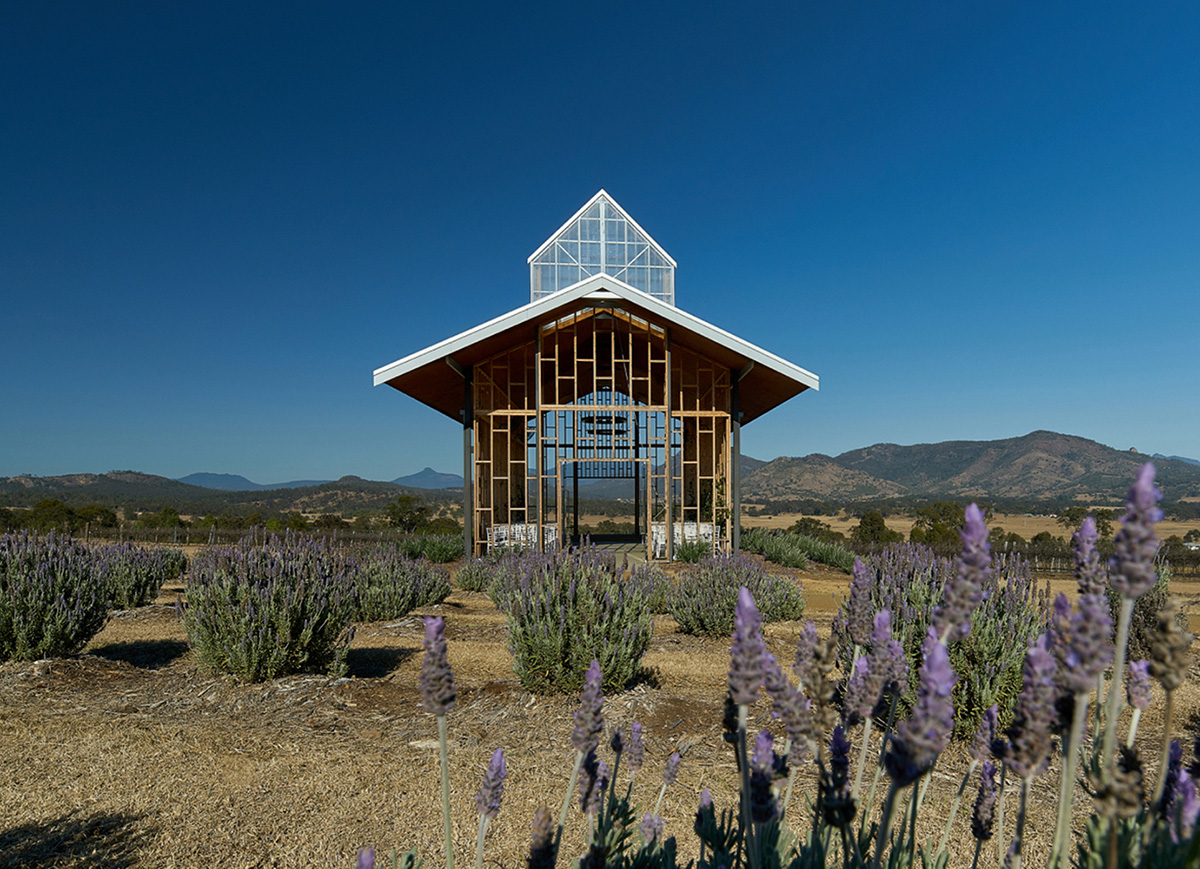 Queensland-based architecture firm Wilson Architects has completed this small wooden chapel on lavender and wine grape fields at Kooroomba in Mount Alford, Australia, with setting three aesthetic concepts: the pastoral, the picturesque, and the sublime.

Named Kooroomba Chapel, the 120-square-metre chapel functions as an emotive space for the special event of a wedding or the inquisitive exploration of the sites landscape setting. 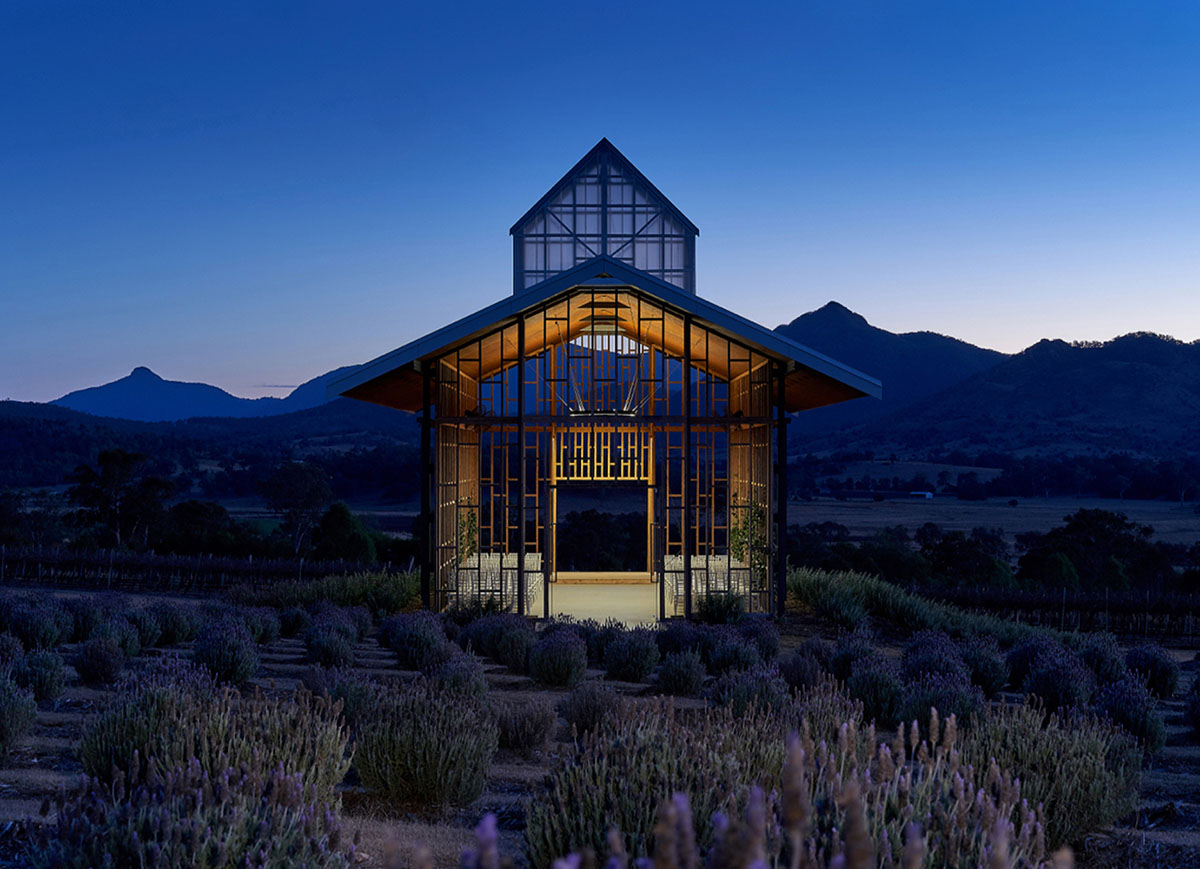 "While the Pastoral and Picturesque reference mankind’s ability to control the natural world, the Sublime is a humbling reminder that nature ultimately dominates," said the studio.

"Here at Kooroomba we have all three laid out in its dramatic setting. Lavender fields and wine grape trellises create ordered pastoral patterns in the landscape." 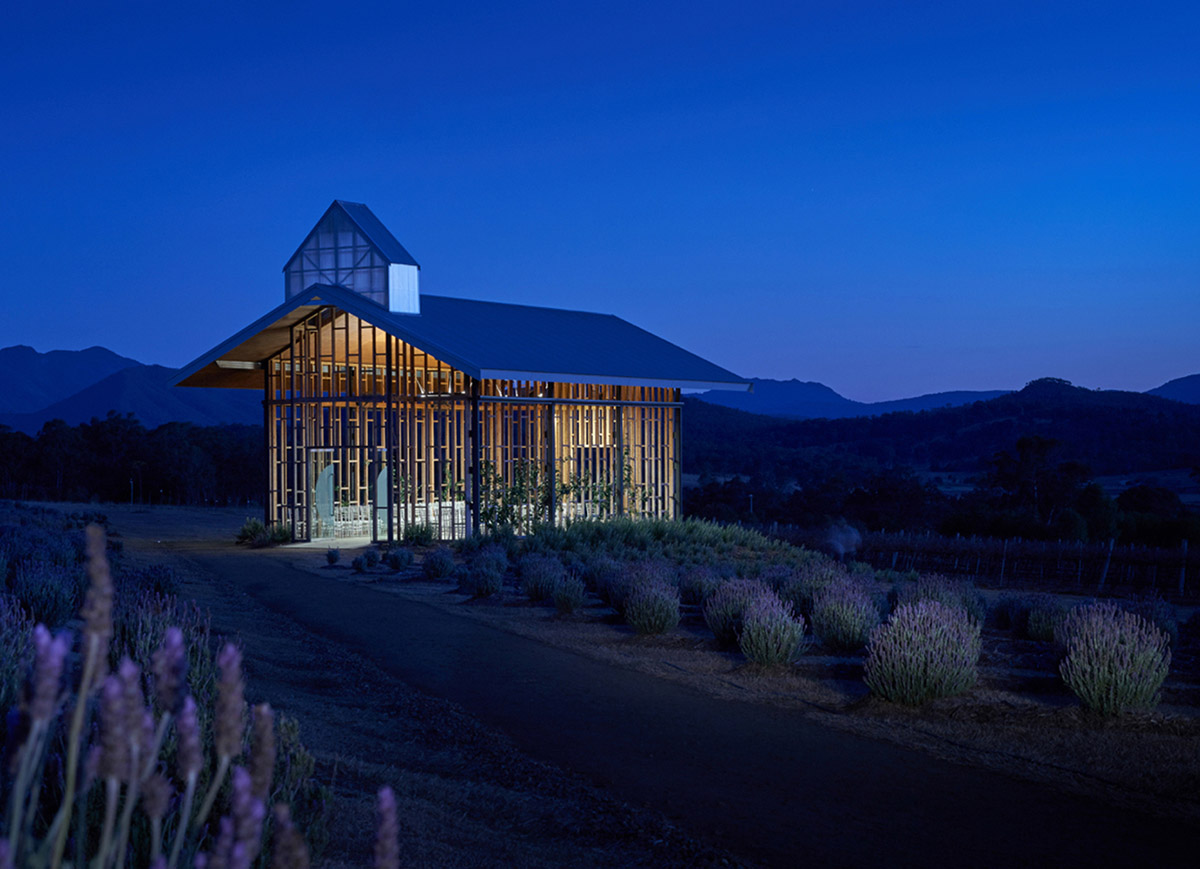 The small chapel is built of a wooden walls, including irregularly-arranged grid pattern to overlook the mesmerizing lavender and wine grape fields, with an extreme sublime effect. 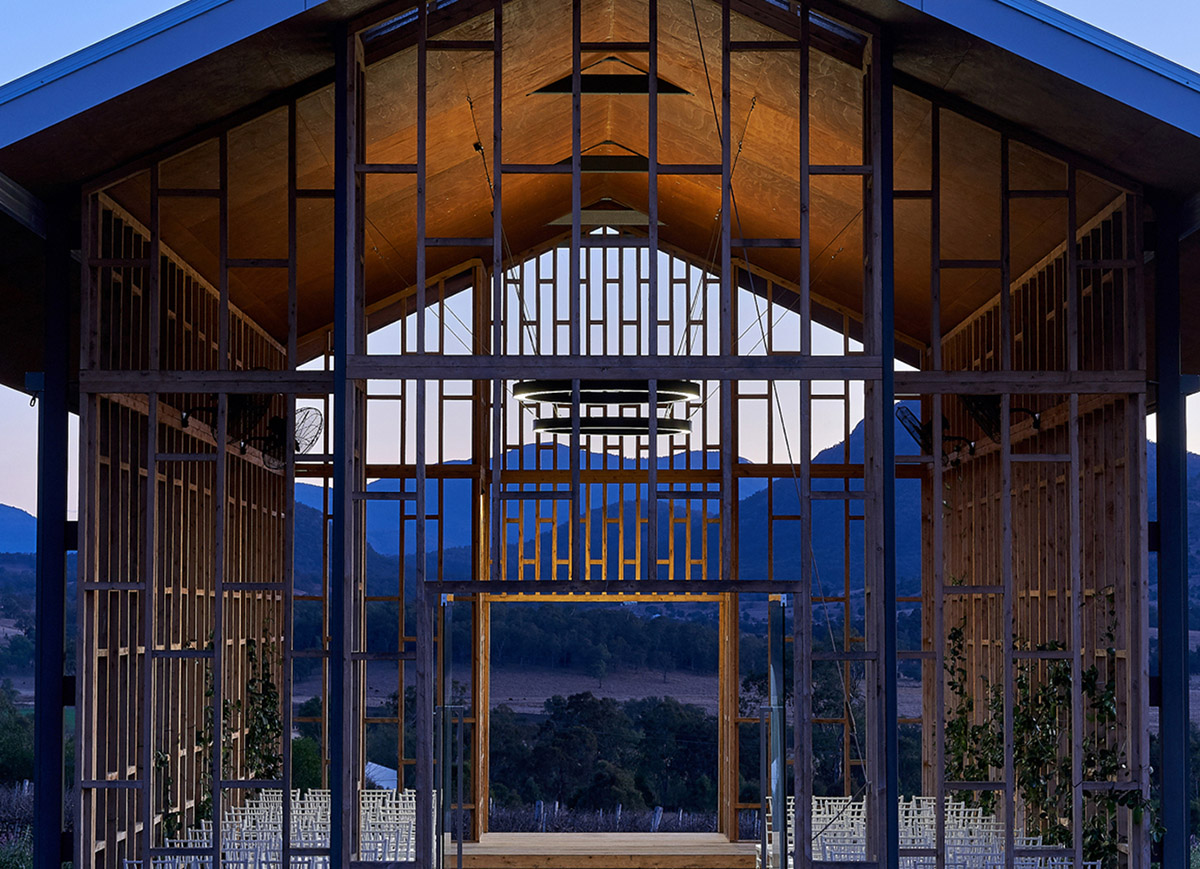 The buildings are then edited into this cultivated field where the Chapel becomes calibrated in its placement to picturesquely reveal two facades in a classically aligned repose (think Parthenon) as well as romantically draw the visitor toward the object as a "ruin" in the landscape. The ruin being quintessentially picturesque which was, in the late 18th century, often constructed as a folly. 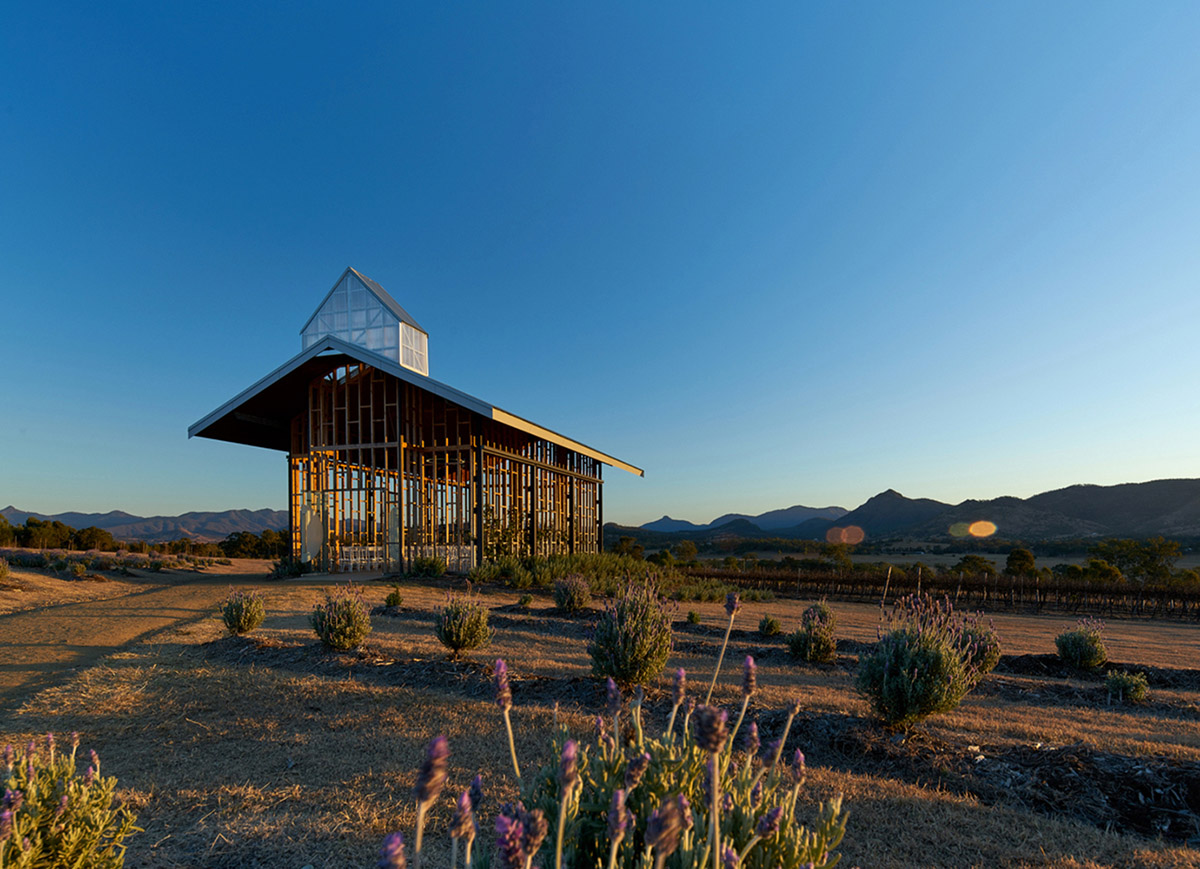 In the eighteenth century, ruins all over the world were being rediscovered and reinterpreted aesthetically as their popularity and their importance as artistic subjects increased.

An increase in travel and travel literature exposed British society to ruins both local and foreign, spurring interest in capturing their picturesque nature. 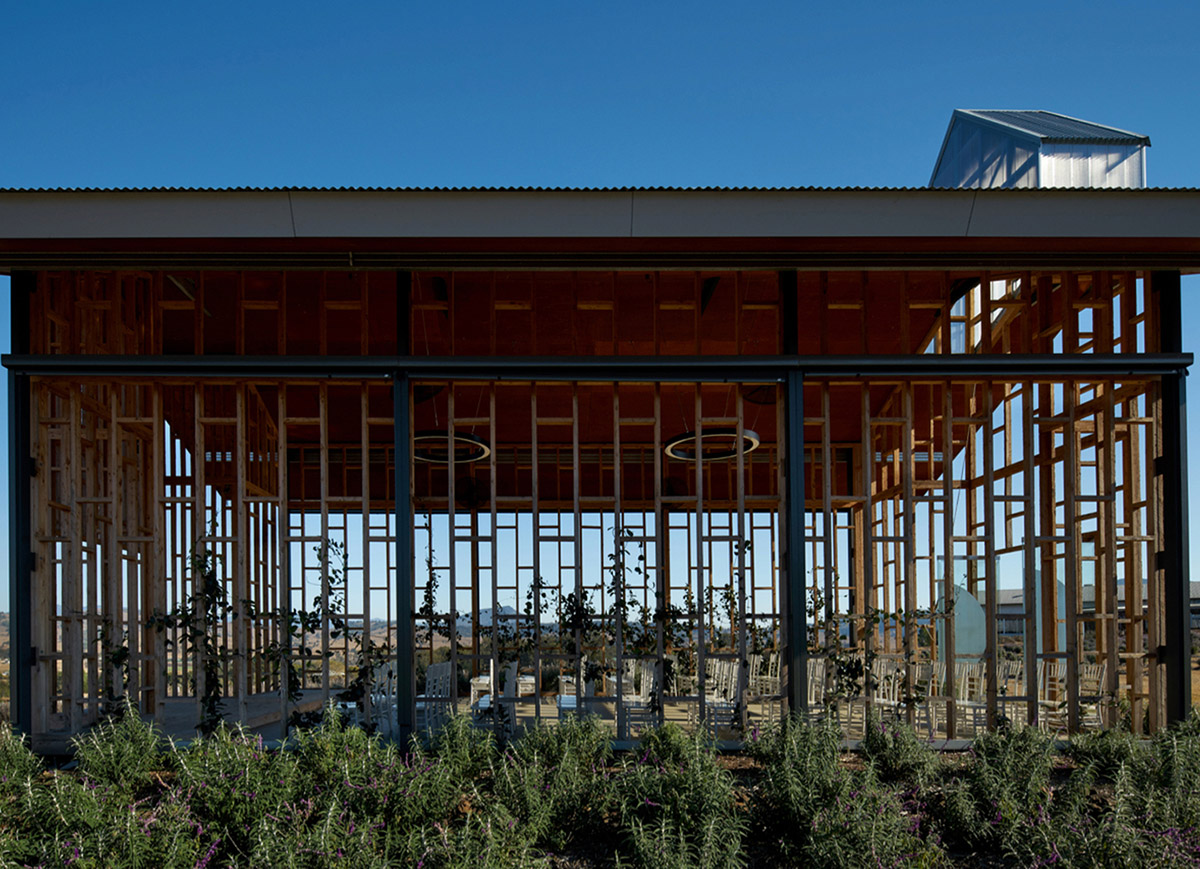 At the same time, a growing awareness of historical documentation and scientific excavations of sites like Pompeii also affected the prevalence of ruins and commanded the attention of the Romantic audience. Frequently "created" as well as found, Romantic ruins invited spectators' reflections on transience, death, and decay. As such, ruins were a staple in Romantic landscape art and garden design.

This curated setting is placed within the context of the mountainous scenic rim and evocatively reminds the visitor of their diminutive place in nature’s higher order. 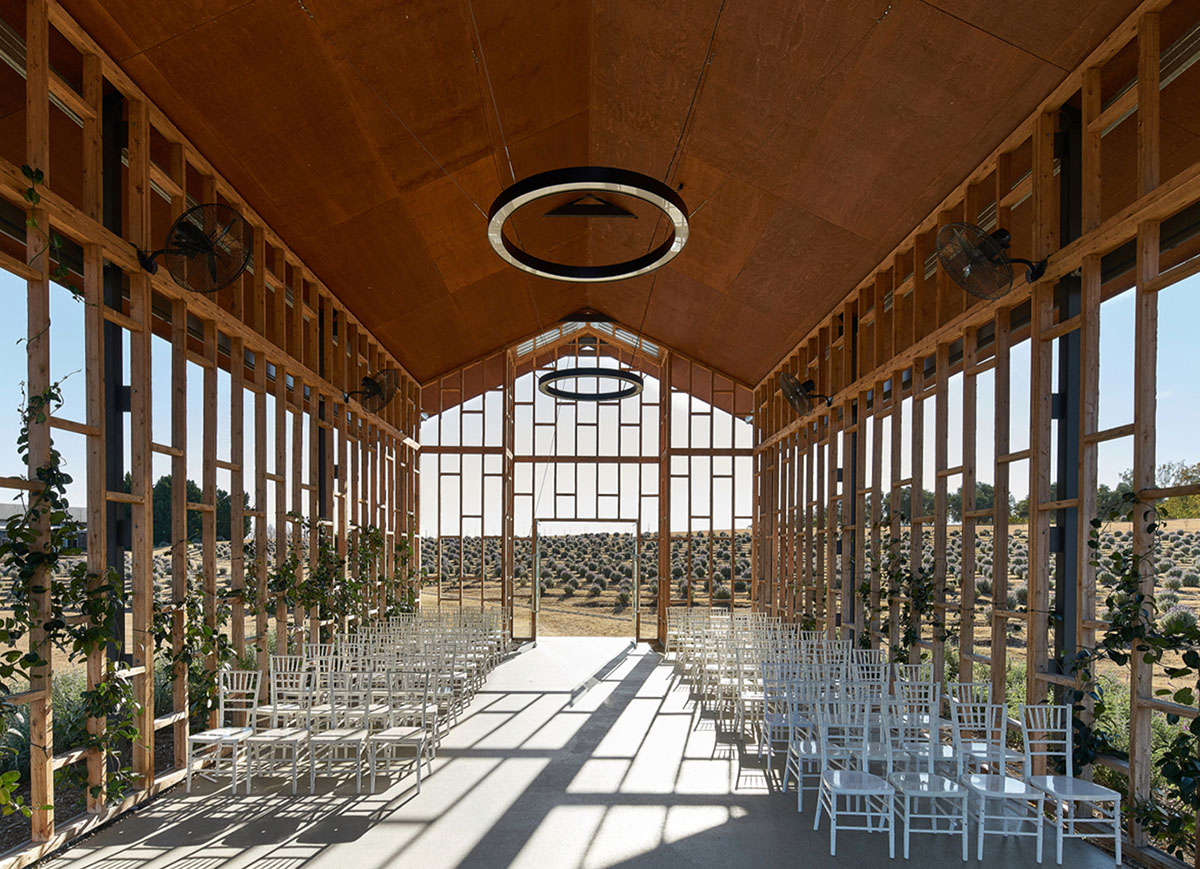 The chapel is non-denominational. References to religious architecture abound particularly citing the charming small timber chapels of Queensland townships. The bell tower, the nave, the alter, the leaded window. It is then deconstructed as a ‘ruin’ romantically placed in the landscape with vines encouraged to overtake the structure. 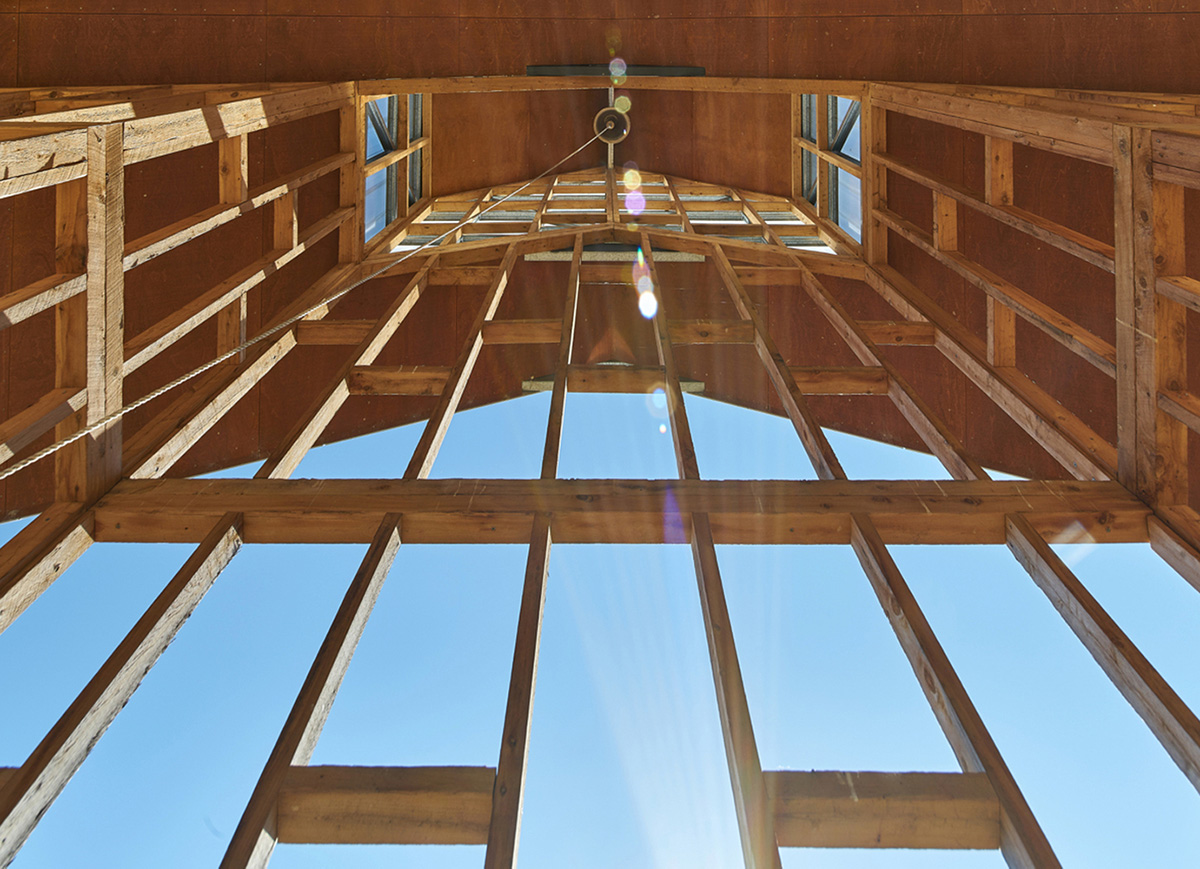 The building is left with walls described rather than made with an inserted frameless glass nave door which can only symbolically denote the threshold as the walls are so completely porous. The chapel nave aligns with one of the major scenic rim mountain peaks. 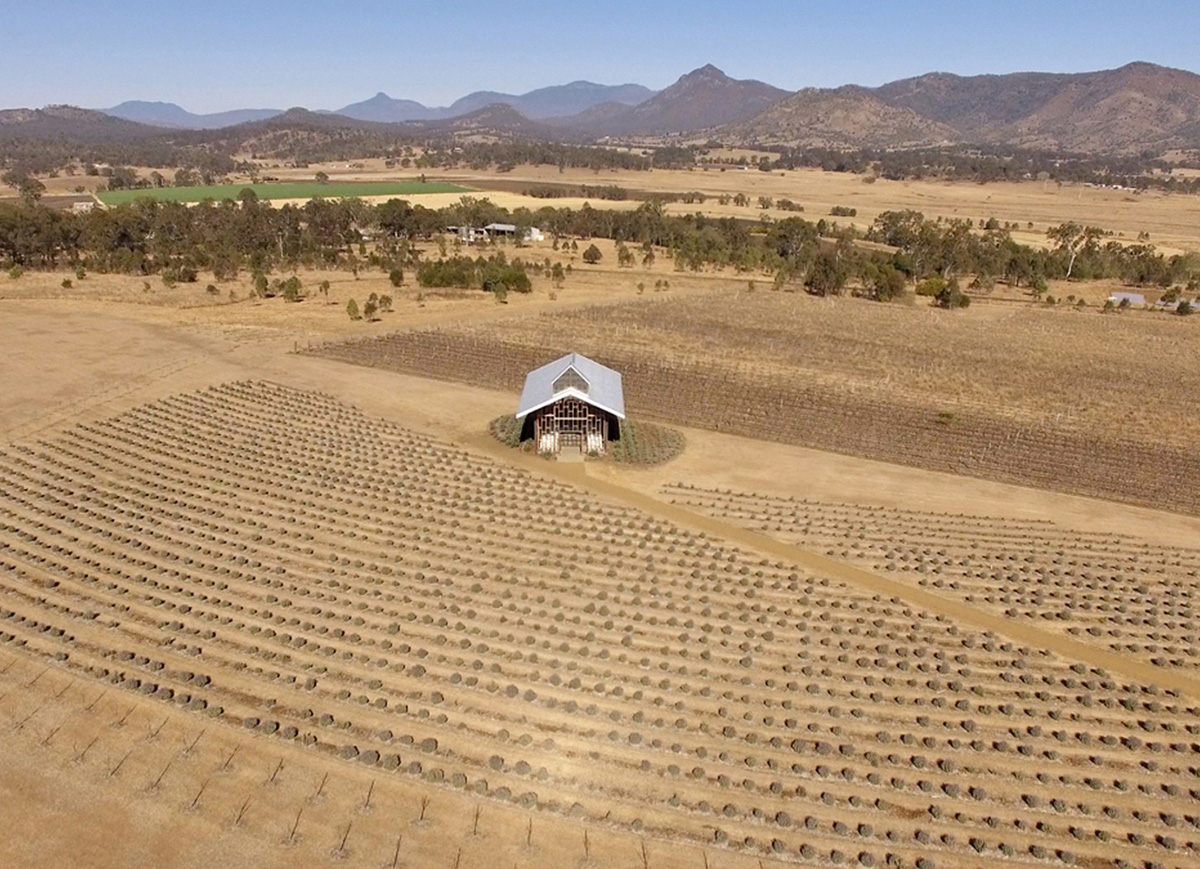 An open window frames the view and, all who are intended, make their vows on the raised timber platform to an otherwise veiled landscape. A bell, in an translucent tower, is tolled by the family after the nuptials are complete and rings out the ritual across the Fassifern Valley. 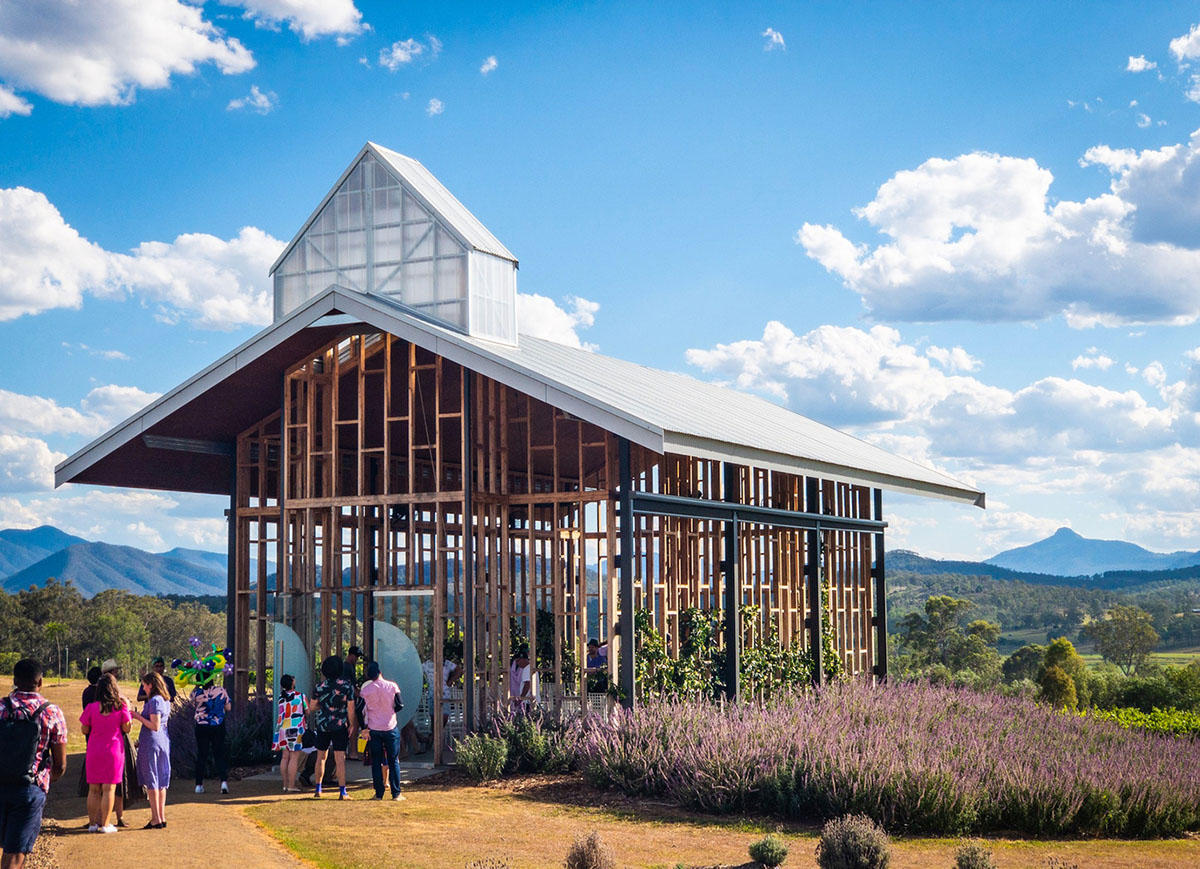 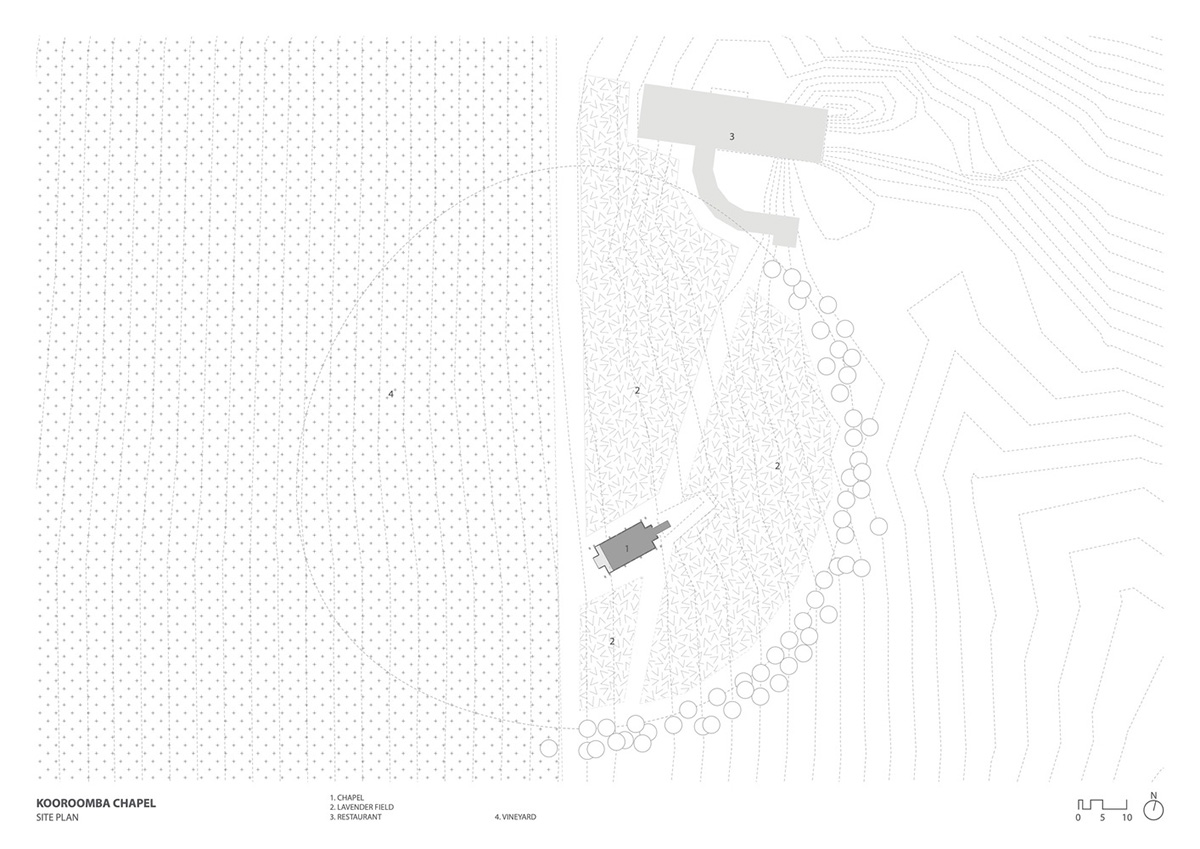 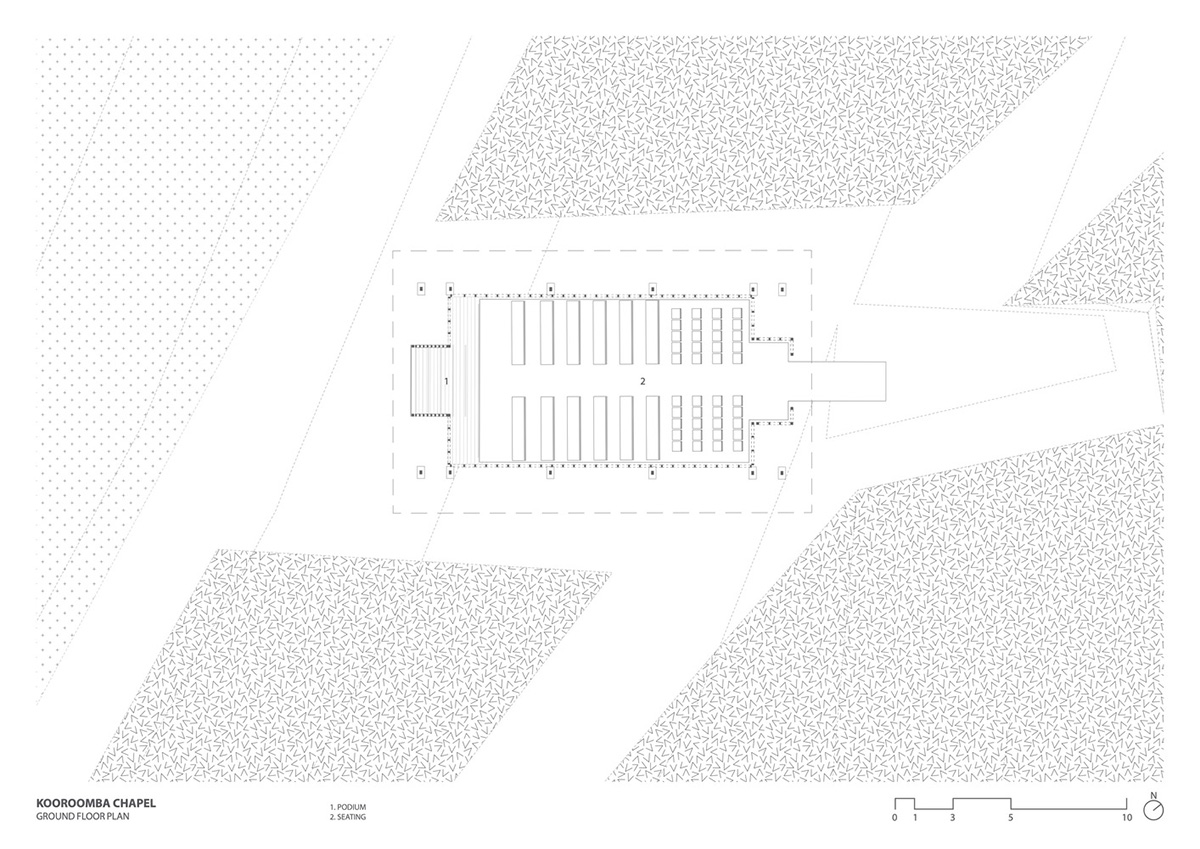 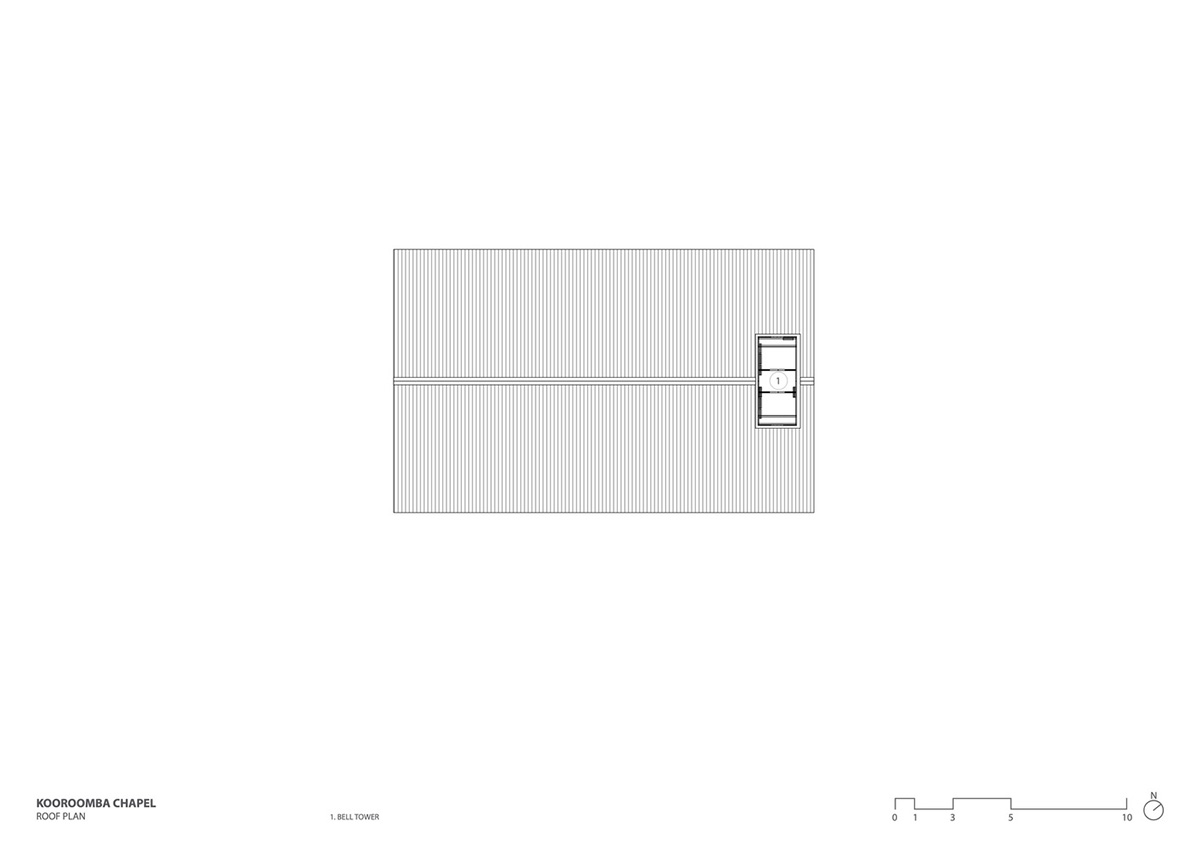