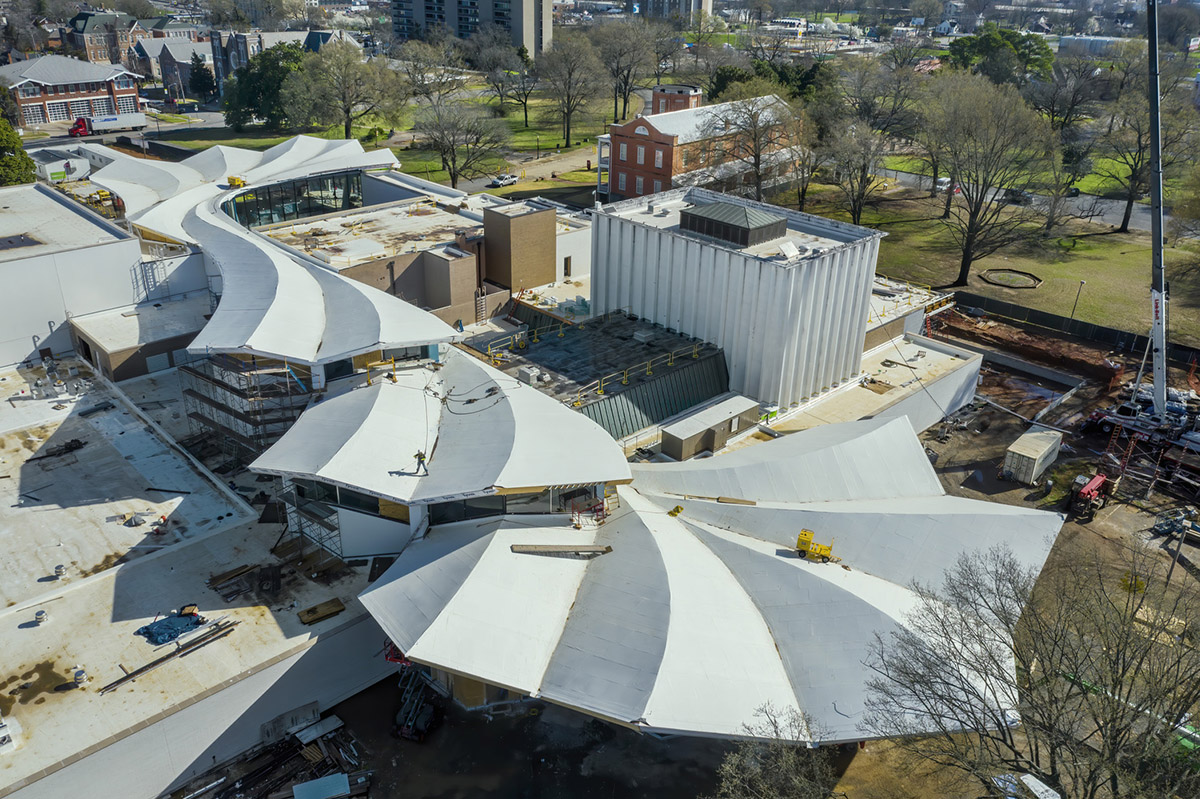 Released in new photographs, the building's roof extends out to the north and south and marks the overall structure in the project area. As the construction moves forward, the Museum plans to open its doors to the public in May 2022. 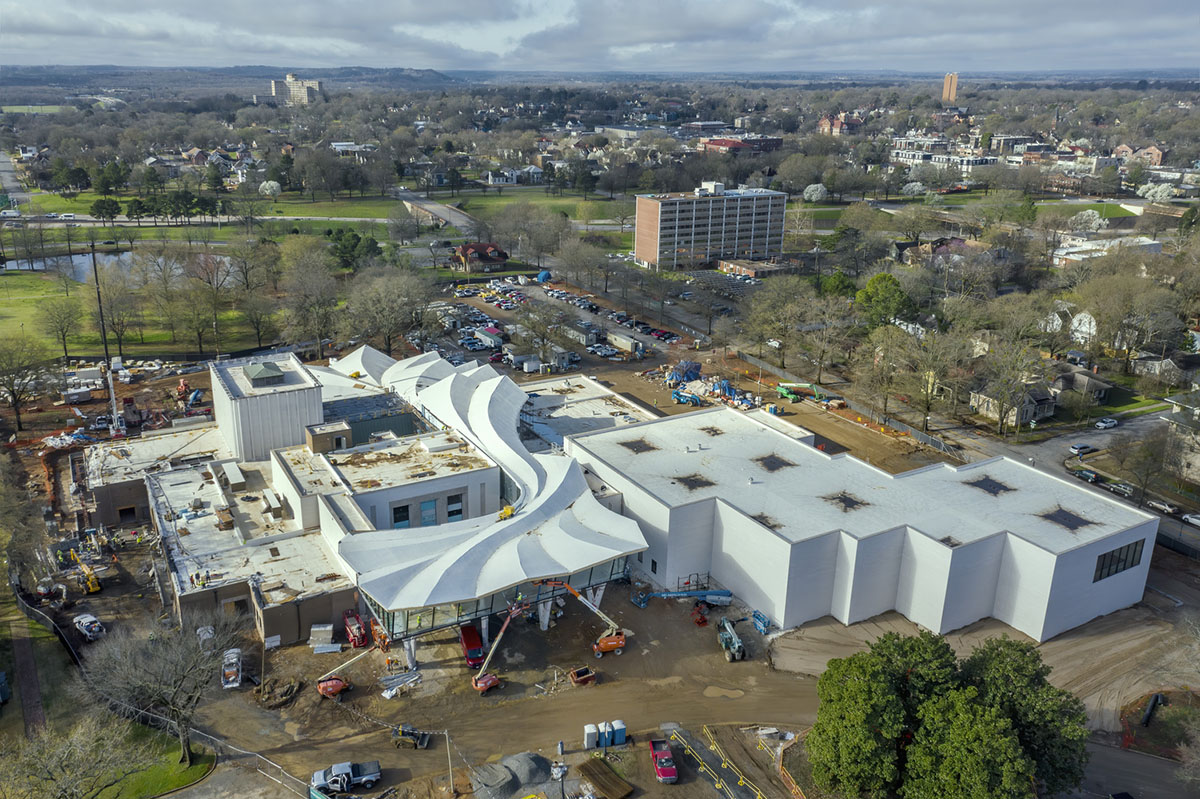 Working from inside to out, the new design clarifies the organization of the building’s interior while also extending the AAC’s presence into historic MacArthur Park, opening the Center to the city of Little Rock and beckoning the public within.

Realised as part of a $142 million special fundraising campaign, the project will offer a new experience through a combination of new construction and renewal of existing structures built between 1937 and 2000. The new project will improve and expand every aspect of AMFA’s facilities. 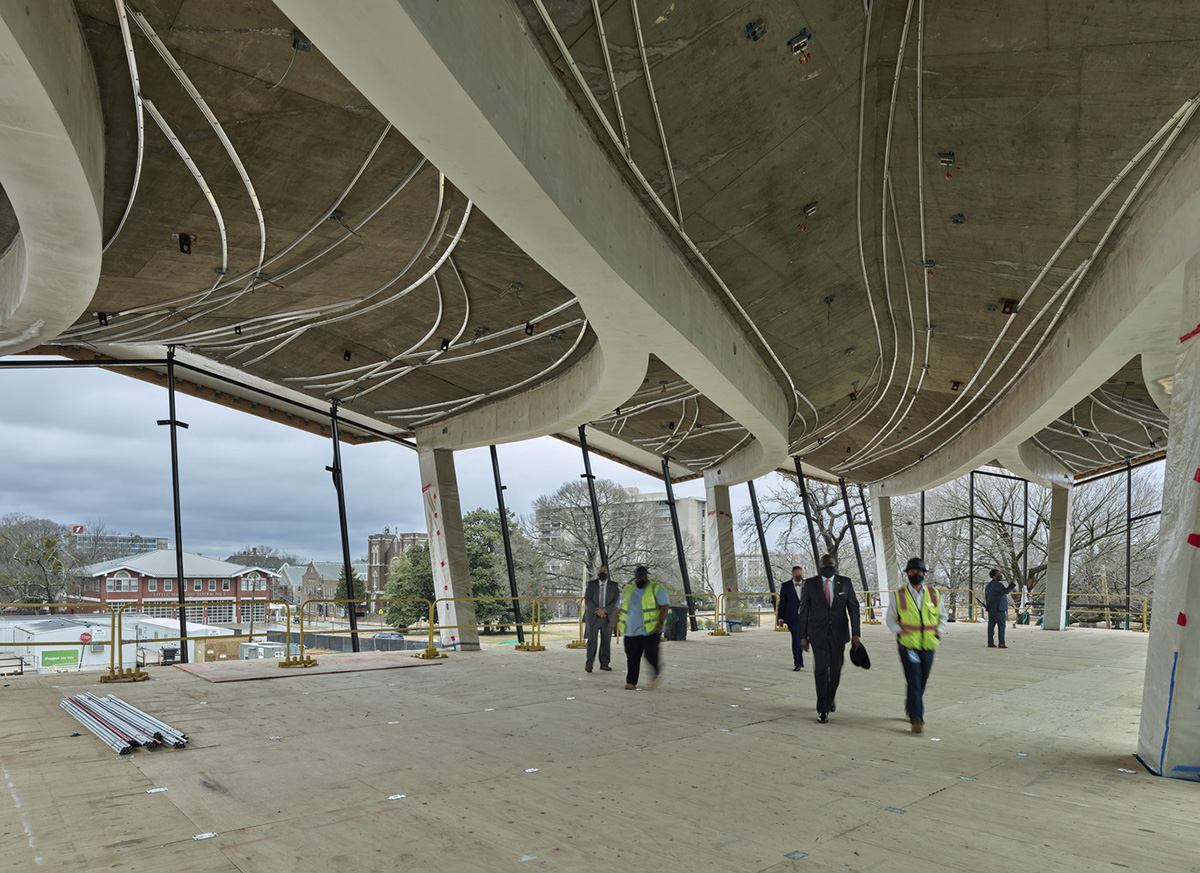 Originally built in 1937 by architect H Ray Burks, the museum has been renovated many times. The museum, formerly known as Arkansas Arts Center is the leading cultural resource for the State of Arkansas, offering installations drawn from its distinguished art collection and temporary art exhibitions, artmaking instruction at all levels, youth to professional, at its Windgate Art School, and a year-round schedule of performing arts in its flexible theater spaces. 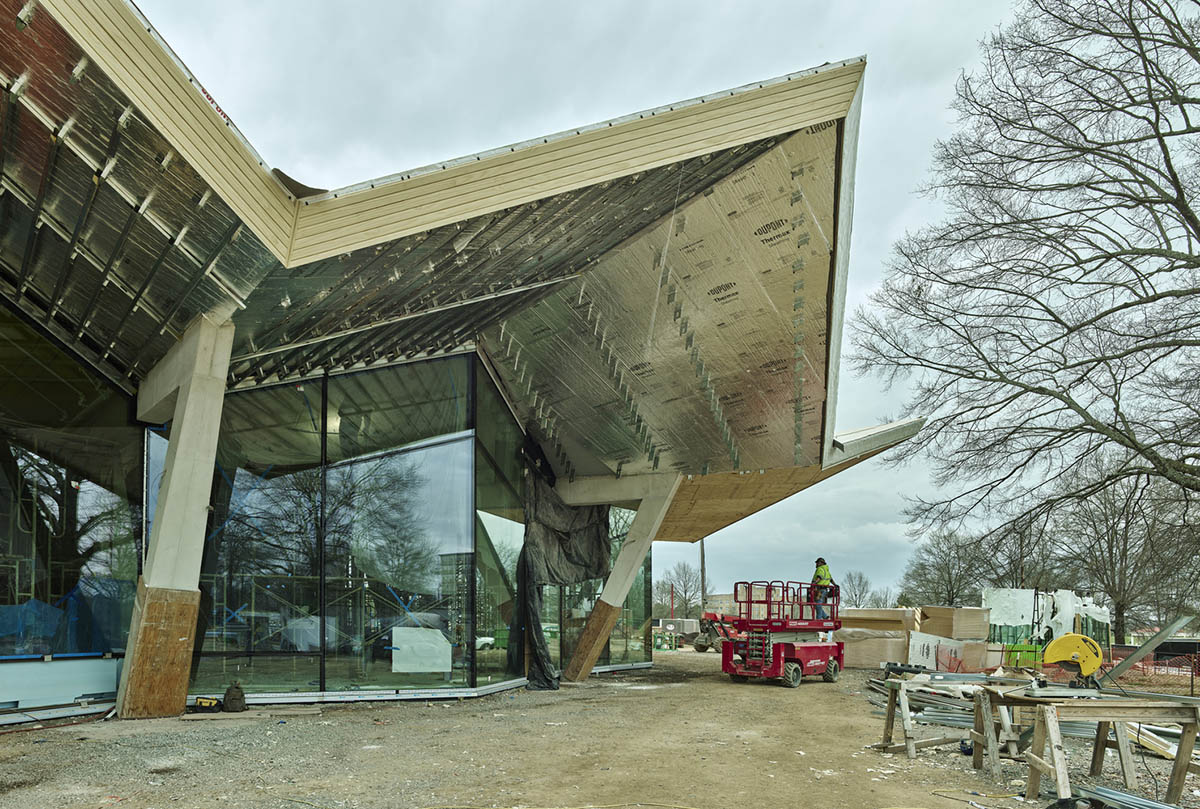 In the new plans, Studio Gang adds new eight architectural additions to form "a unique architectural identity that would knit together the various structures, building systems, and programs, open up the Museum to increase visibility and accessibility, and renew historically significant elements."

The studio designed "a new central axis," this axis is a gently curving space that winds through the building, north to south, it acts like "the stem of a plant" with major program areas branching off the main axis. 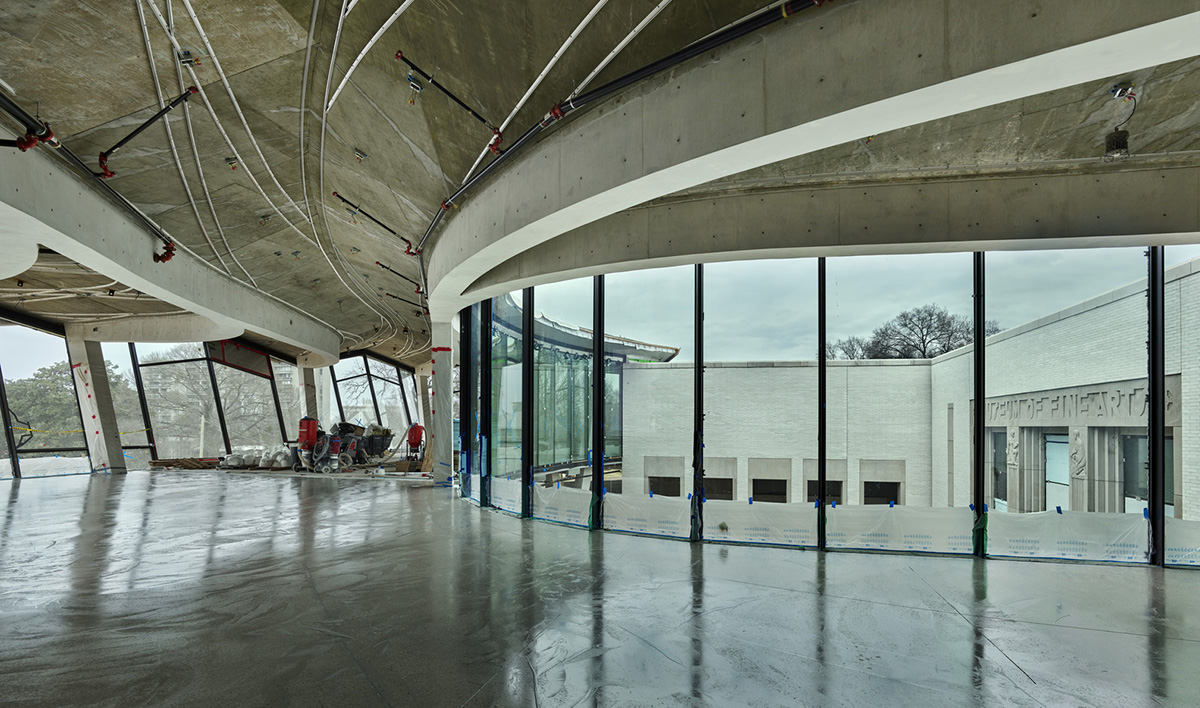 As visitors walk along the route, they will be able to see into these distinct spaces such as exhibition, education, and performance spaces, inviting them further exploration. This central space will act as a flexible atrium, as the architects explained. "The most carbon-intensive elements of the building have been kept intact, and back-of-house, staff offices, and art storage have been reconfigured to streamline the visitor experience while creating state-of-the art conditions for art storage, transportation, and display," stated the Museum.

The design of the roof, and each acts like a “petal”, will visually and experientially guide visitors into each of the major programming areas – from the galleries and event spaces to art studios, theater, and lecture hall.

To the south, the new restaurant with floor-to-ceiling windows will offer views of the surrounding terrace and park.

"From the outset, the goal of this project has been to make accessible the very best of art and architecture to Little Rock," AMFA Executive Director Victoria Ramirez said.

"In working with Studio Gang and SCAPE, we are realizing the most contemporary ideas about museums and public spaces and creating a new paradigm that is both art and people-centric," added Ramirez.

"The revitalized MacArthur Park, designed by SCAPE, will be renewed with rain gardens, native and sustainable plantings, and contemplative pathways, and planted with a diverse mix of over 50 different species of perennials, shrubs, native trees, and ornamental grasses in petal-shaped gardens that respond to the form of the Museum’s roof," added the Museum. 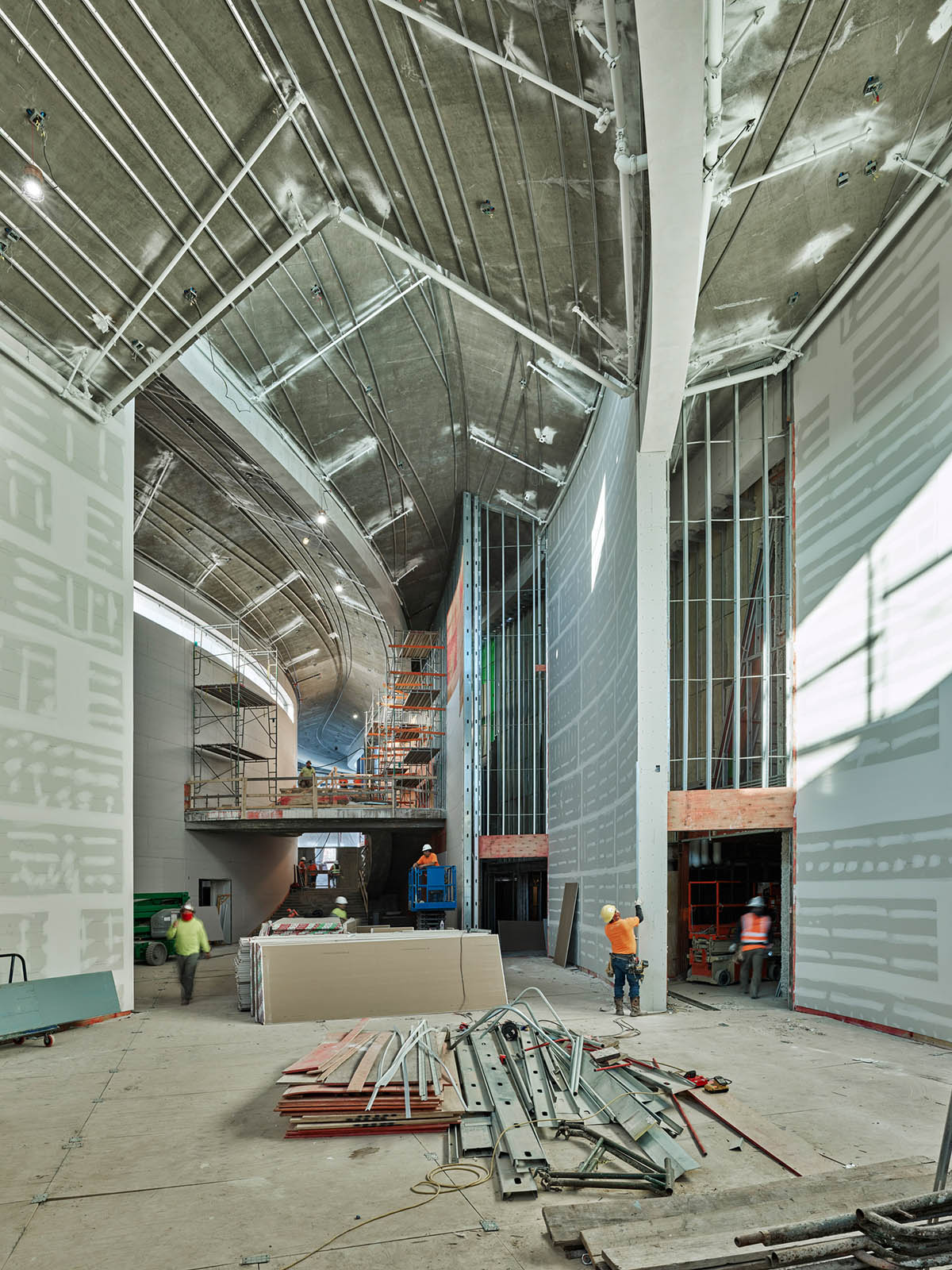 "Stacked sandstone slabs – quarried from the region – will convey stormwater runoff from the roof into a series of lush, vegetated rain gardens, which will attract pollinators and migratory birds to the site." 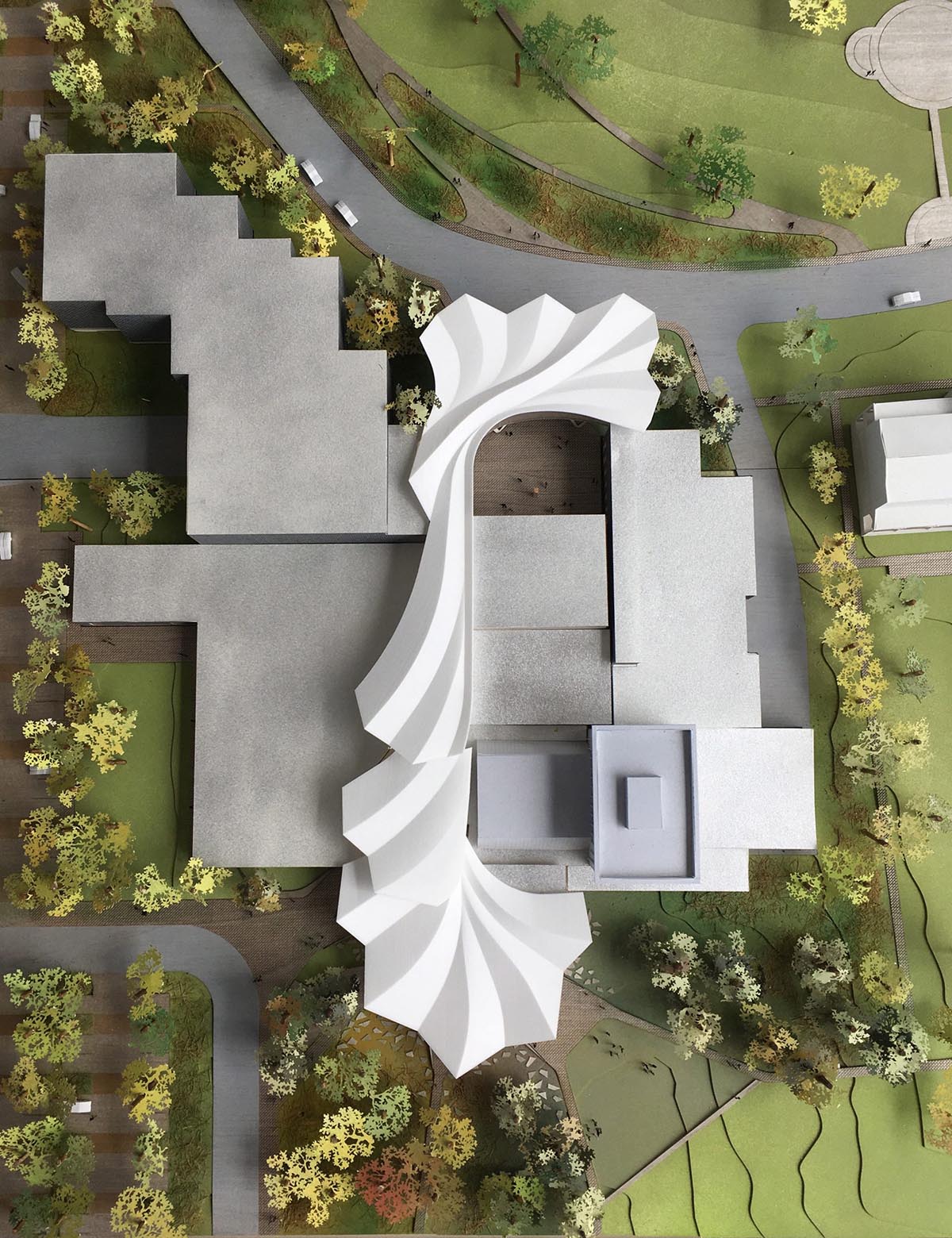 The museum also added that "the 1937 building featured a limestone façade designed by Little Rock artist Benjamin D. Brantley and features two carved relief figures – Painting and Sculpture personified – identifying the Museum as a space of art and creativity along with the inscription “Museum of Fine Arts."

"The new building reveals the façade to the outside for the first time since 1982, when an addition enclosed it as a feature of the building’s interior galleries," added the Museum. 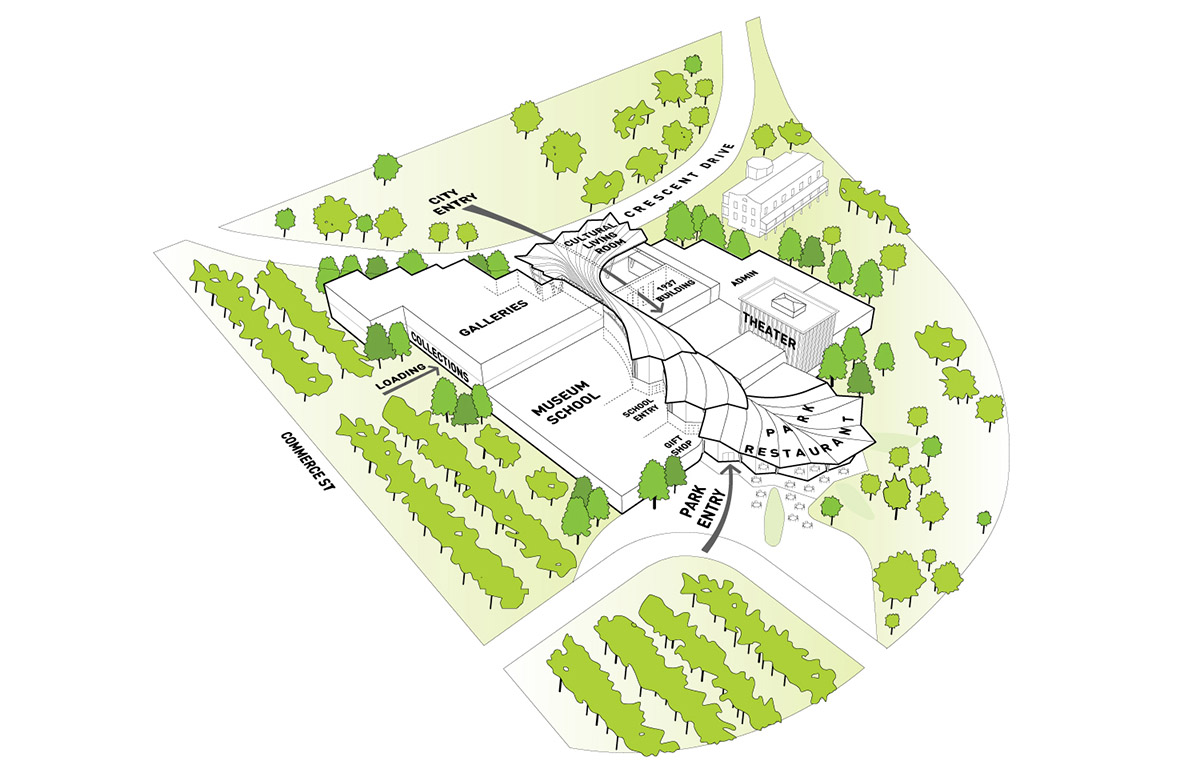 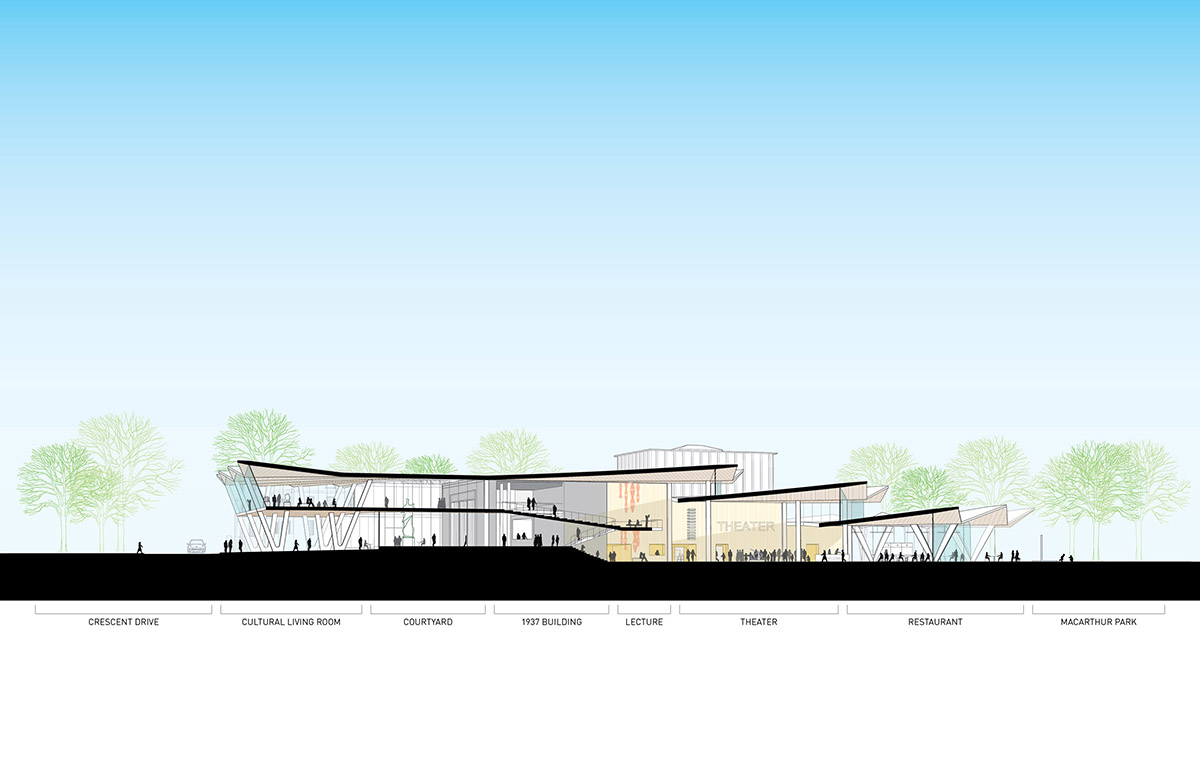 Studio Gang's Arkansas Museum of Fine Arts broke ground in 2019. If everything goes on a plan, the building will open to the public in May 2022.