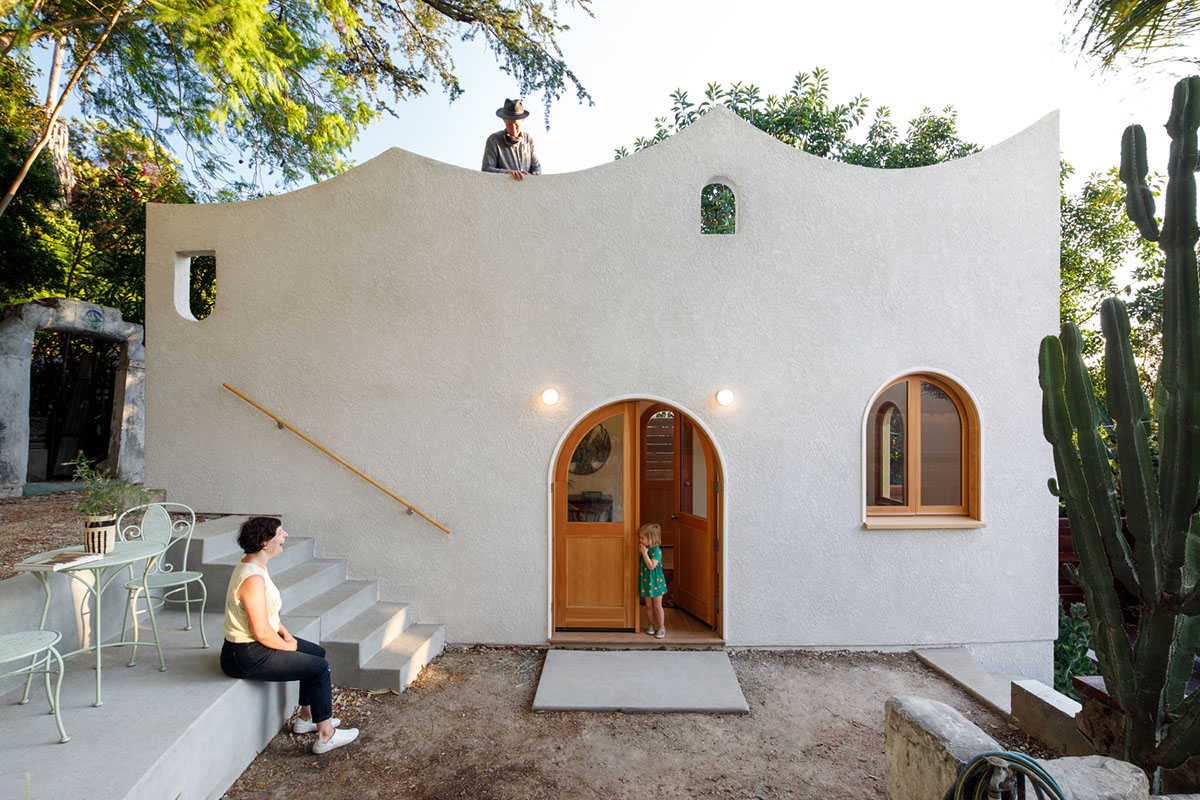 The house, named Stiff Peaks, is located within a hillside property abutting Elysian park in the Echo Park neighborhood of Los Angeles.

Defining its own character, the design evokes a classic Hollywood decor with its gently curving walls and fileted corners that create a curvaceous interior. 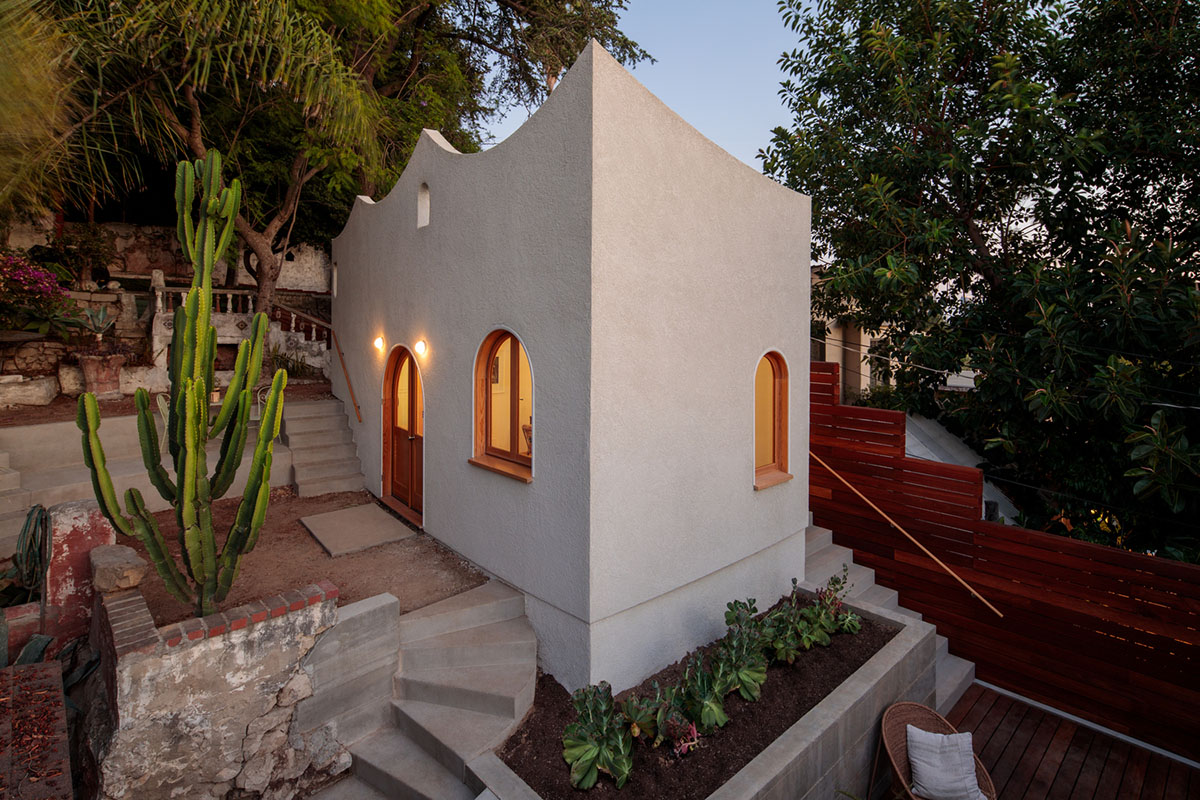 A filmmaker and a poet commissioned Byben & Skeens to design his new writing studio and guest house which will be situated within the backyard standing in a lyrical antique style with circuitous crumbling stairs winding up the hill and a hand-made shack on the brink of collapse. 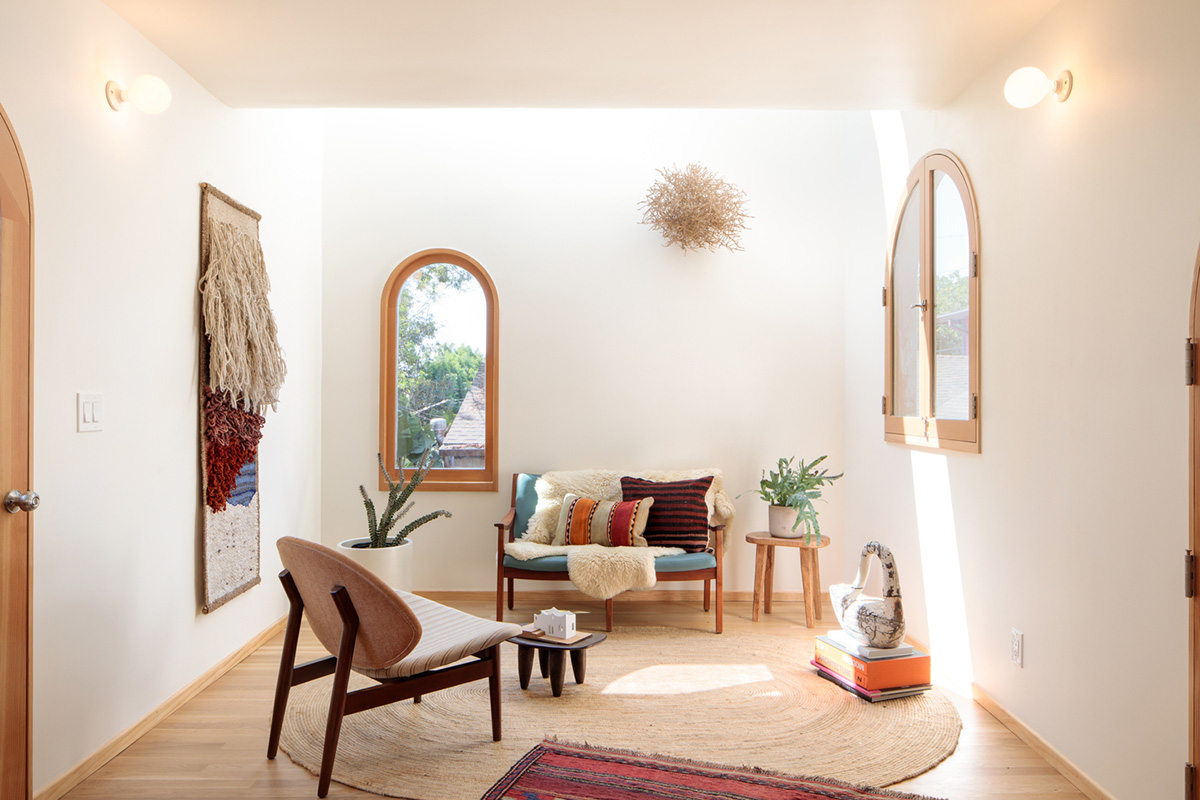 For this tiny writing studio, the firm was inspired by the existing whimsical setting, as the architects highlight, "the client wanted to replace the existing setting with a writing studio and guest house that evoked the past but was firmly contemporary."

ByBen & Skeens aimed to create a multifunctional interior and exterior space addressing to the client's need and formed a solitary space for creation that let them feel both at home, and in another world. 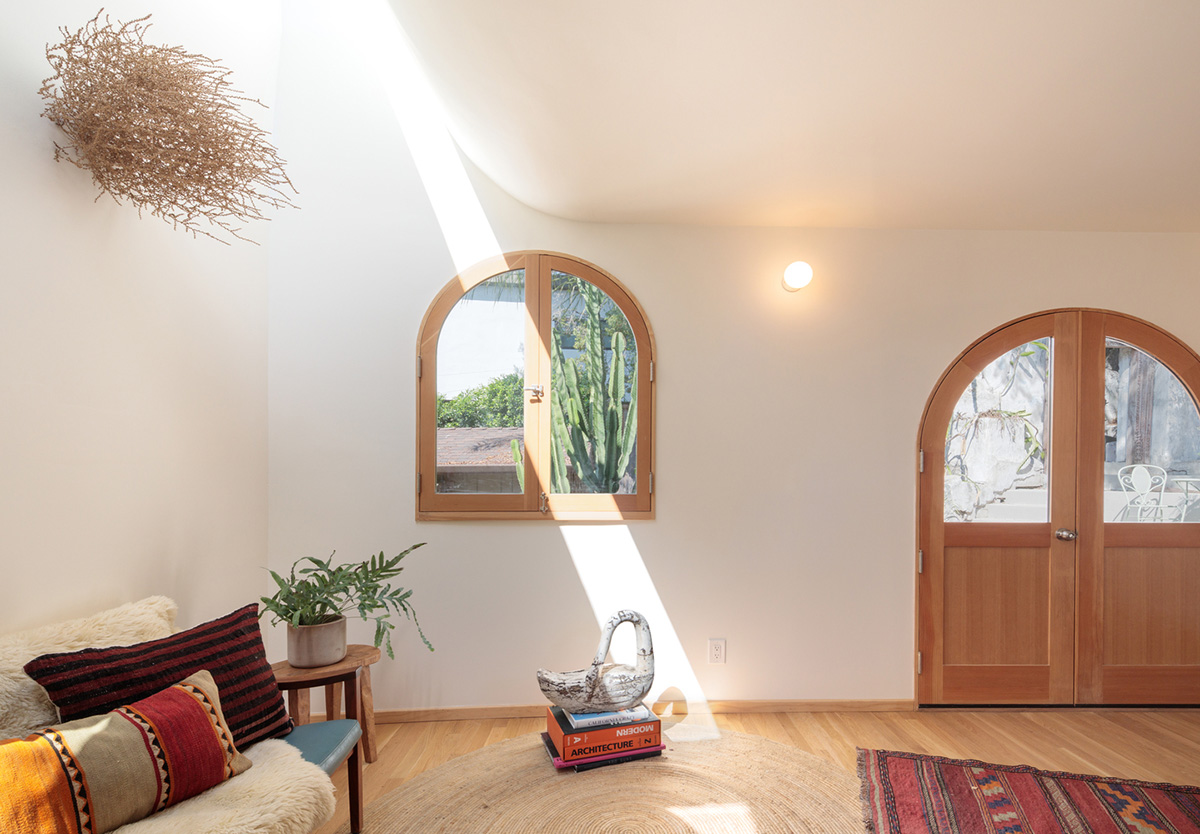 Covering a total of 250 square foot (23-square-metre) area, the hut is situated midway up a steep hill just above the main house.

The building has a single room and powder room marked by the curved wrapper of the exterior walls. On the west side, the room is lighted by a full-length skylight that fills the room, the light modulated and defused by a curved wall sweeping into the space below. 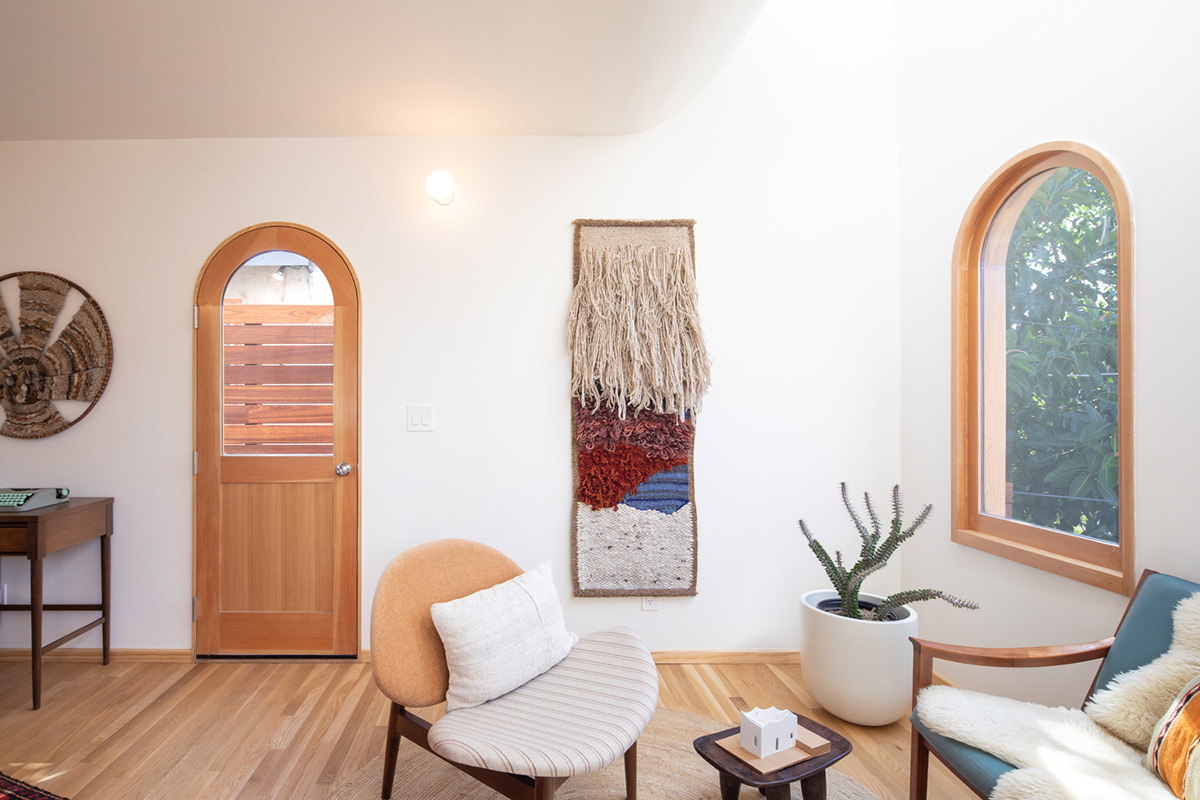 On its outer façade, the arched windows and doors avoid views into the house to focus on the surrounding trees and sky creating a sense of escape and emersion in nature. 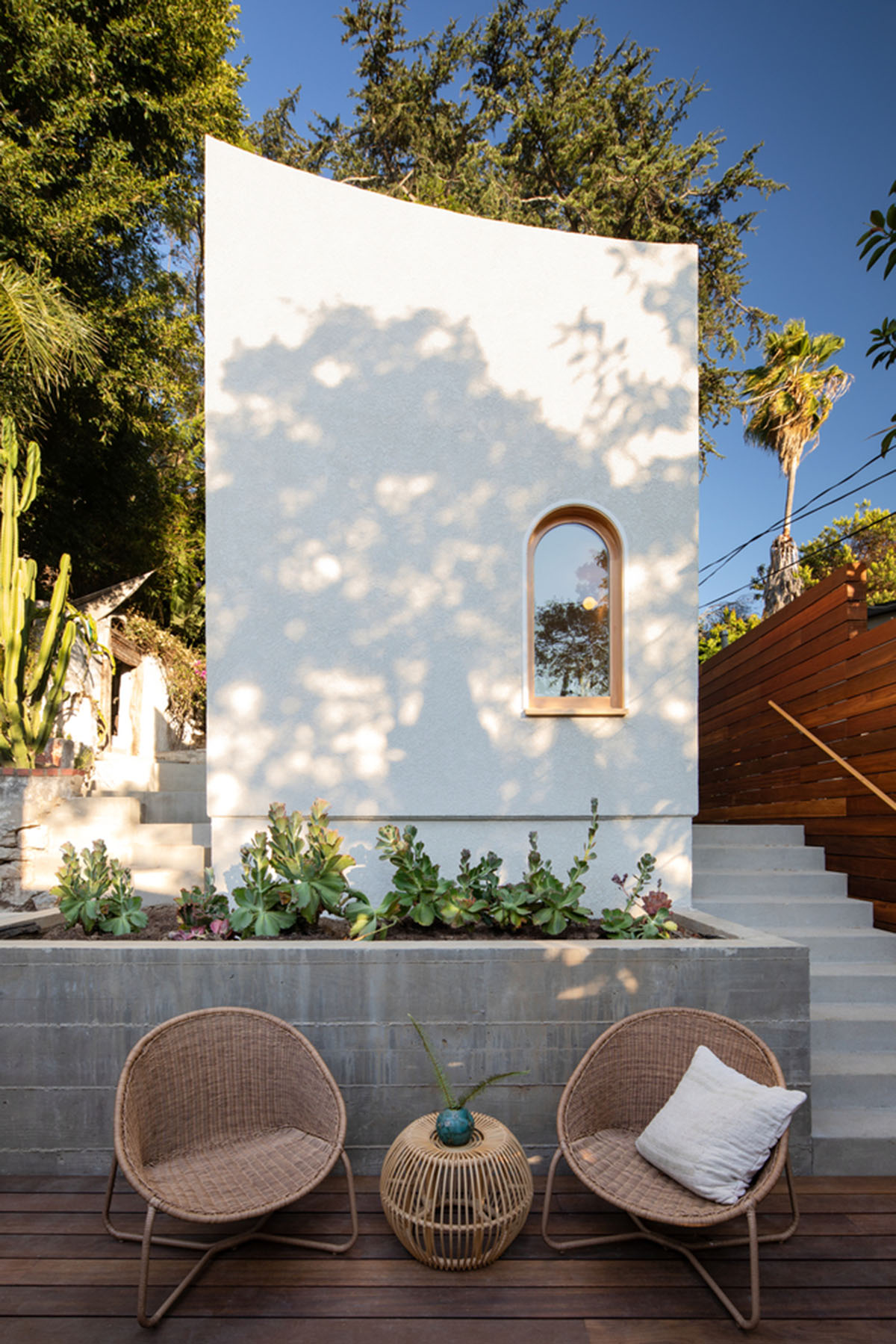 The studio designed a pair of French doors that open to the exterior rehearsal area to the north while a single door provides a more discrete entrance accessible via a side entrance from the street. 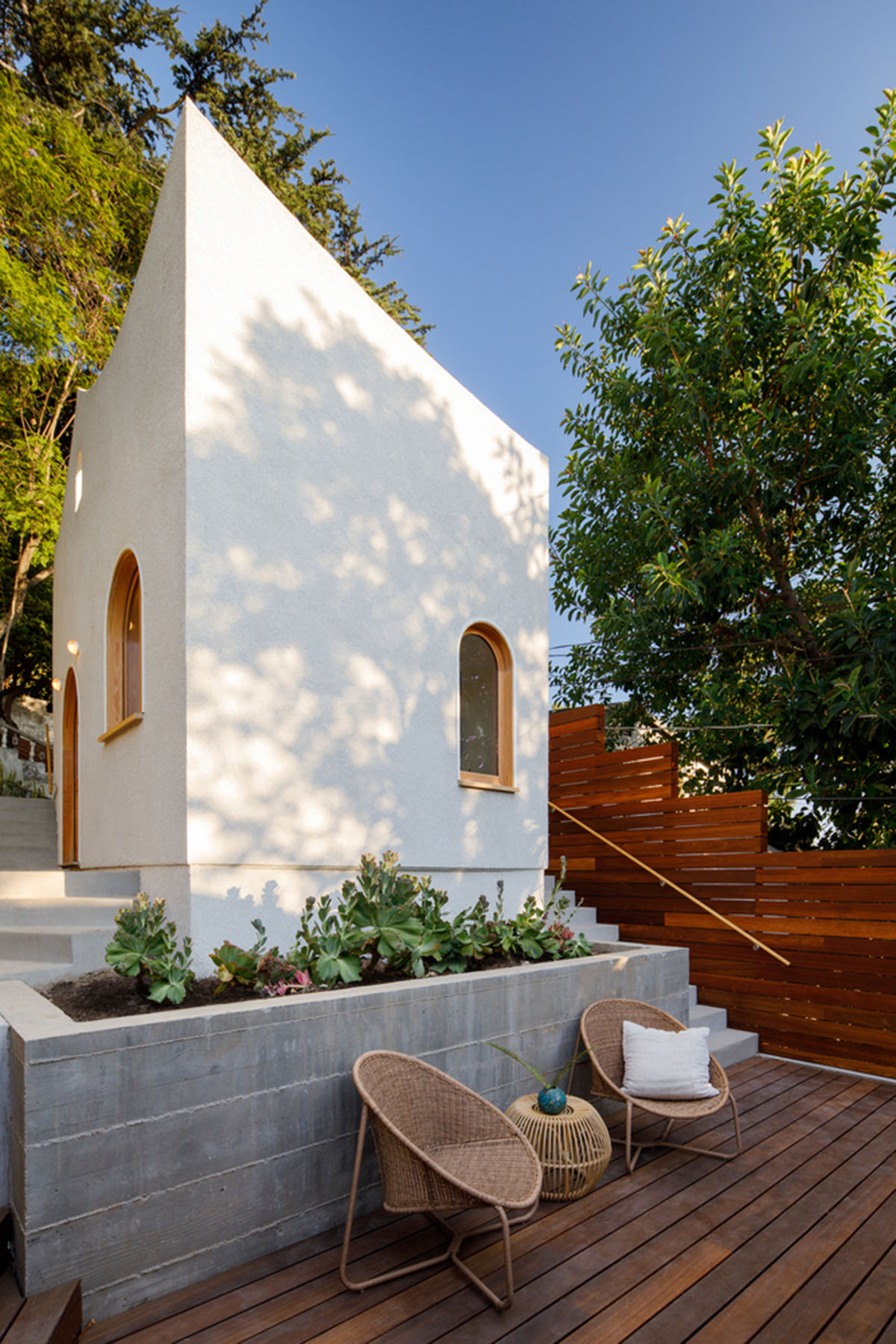 Emerging from the existing house at the lowest level of the hill, the architects placed an open wooden deck to provide a flat-shaded space to enjoy morning coffee and yoga. Ascending the winding stairs brings users to an open space leading to the building's French door entry. 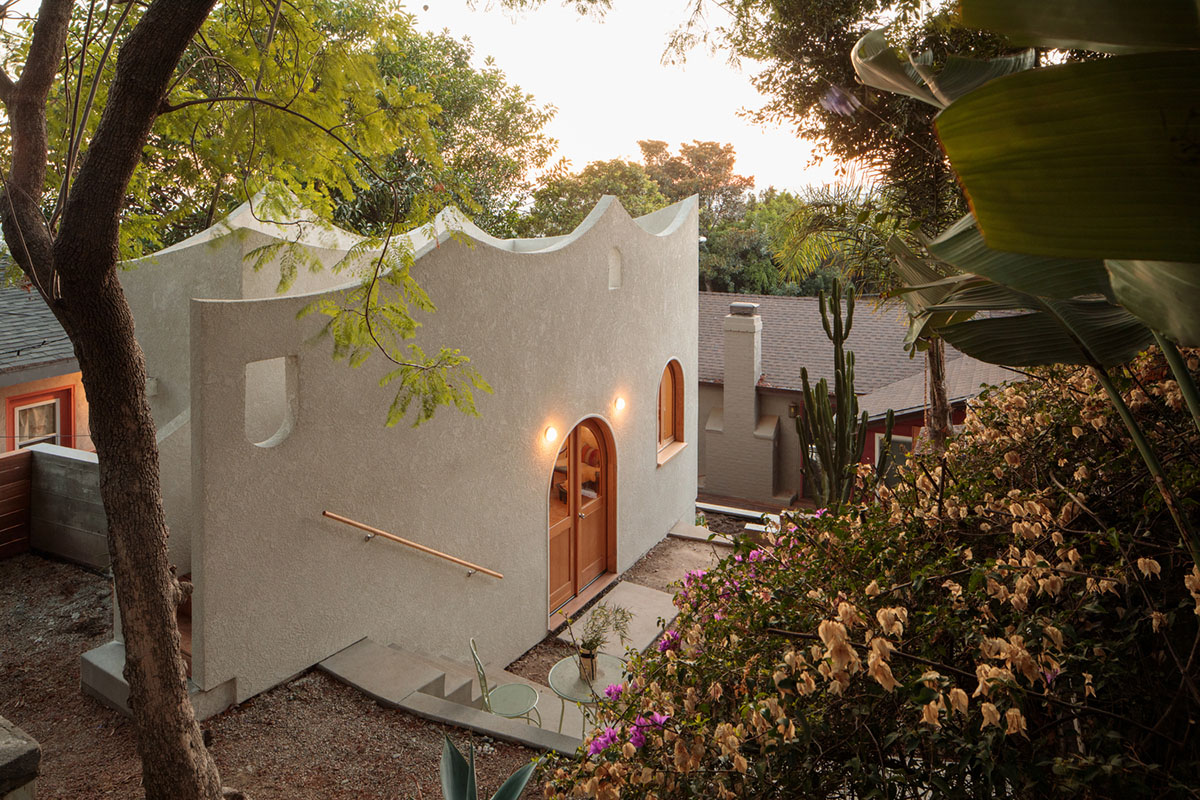 "To the east a set of tiered seating risers allows the open space to be used as a stage for rehearsing with actors. At the top level, stairs lead further into the forested hilltop or up to the top of the building," the firm added.

"There, a sun deck is bound by the peaks and arches of the crown-like parapet of the building." 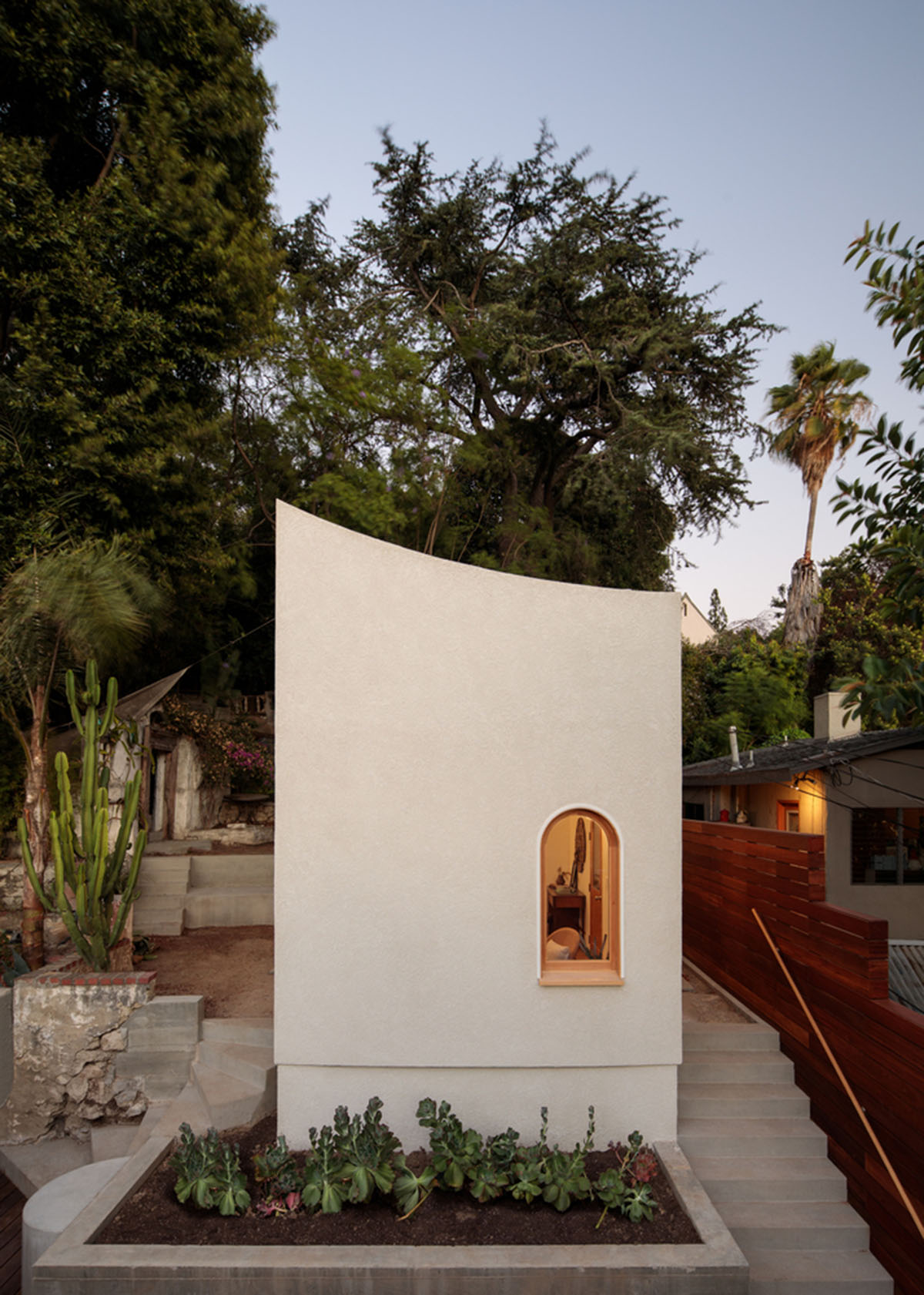 "Facing east the deck has an intimate interior feeling produced by the dappled light of a closely overhanging tree canopy while to the south and west it provides clear views of downtown LA and beyond." 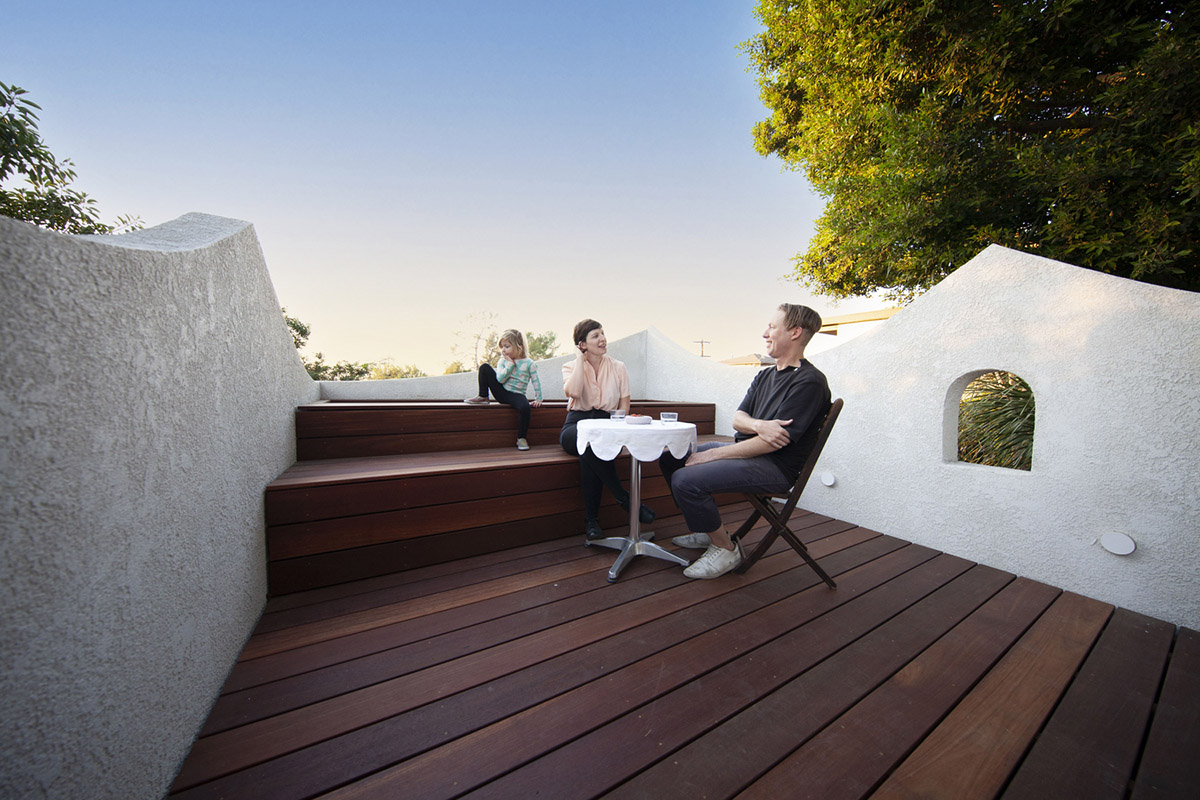 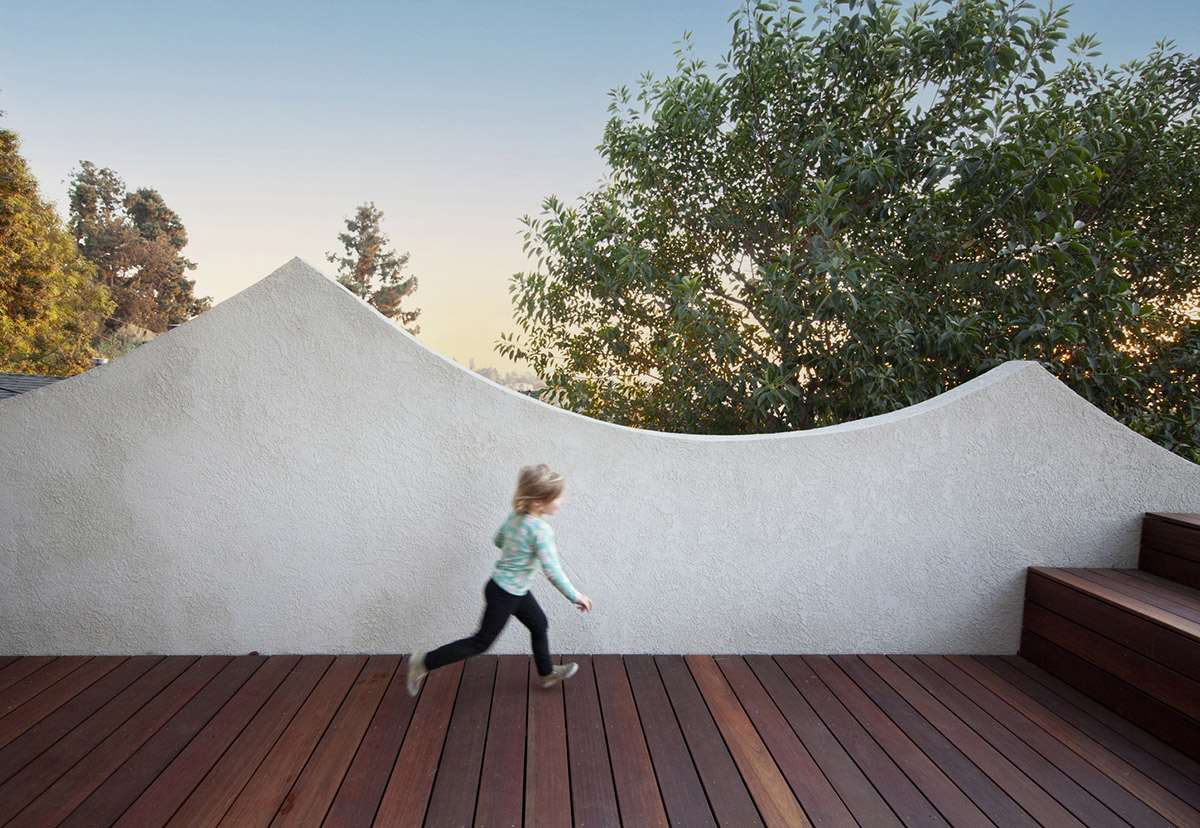 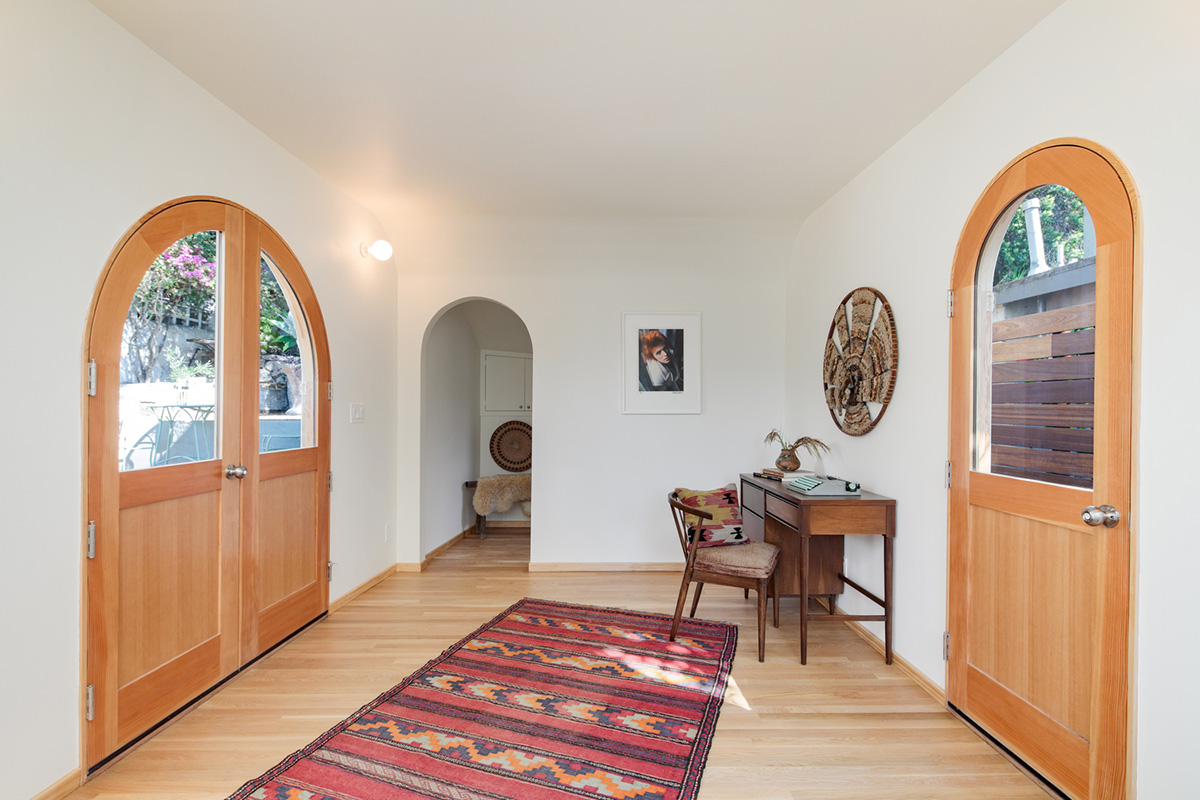 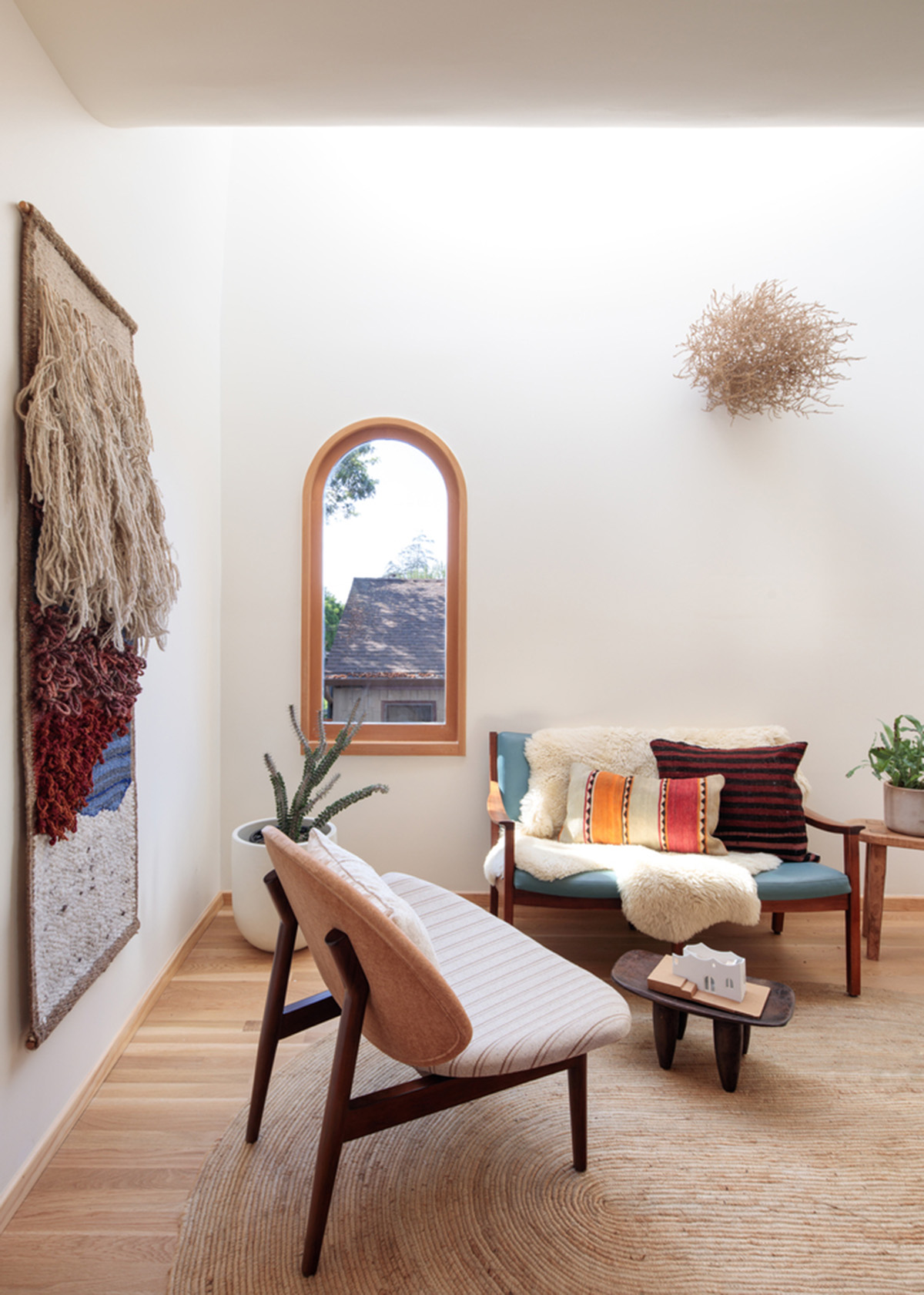 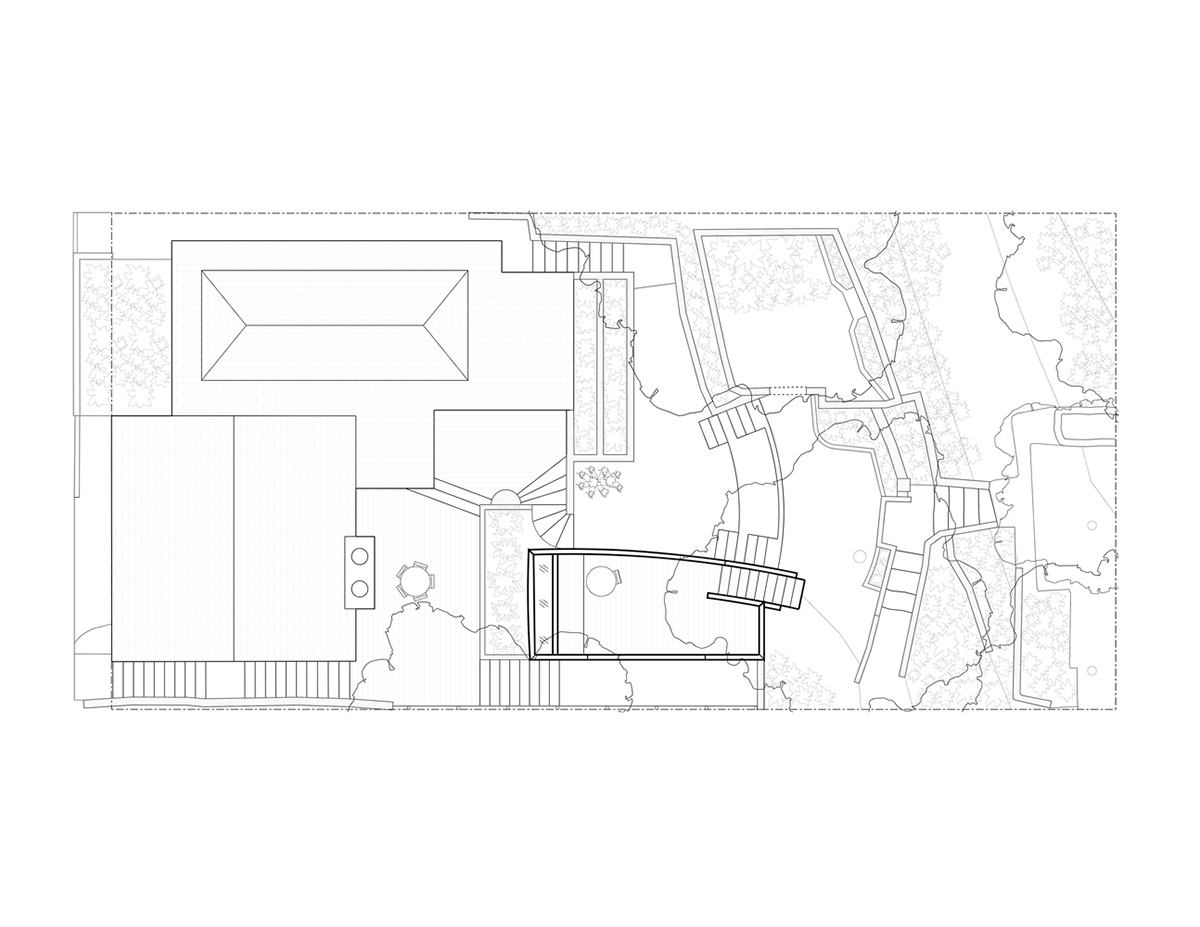 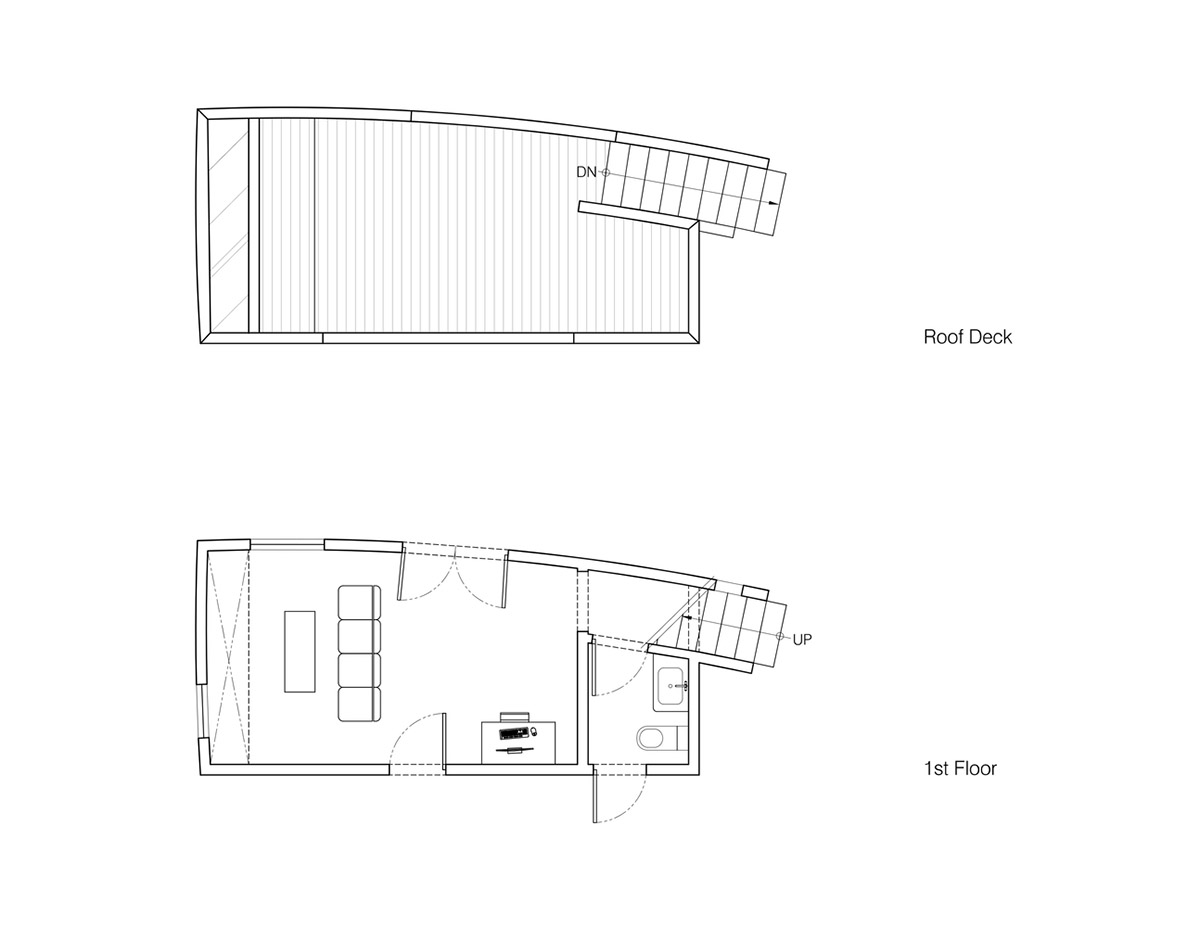 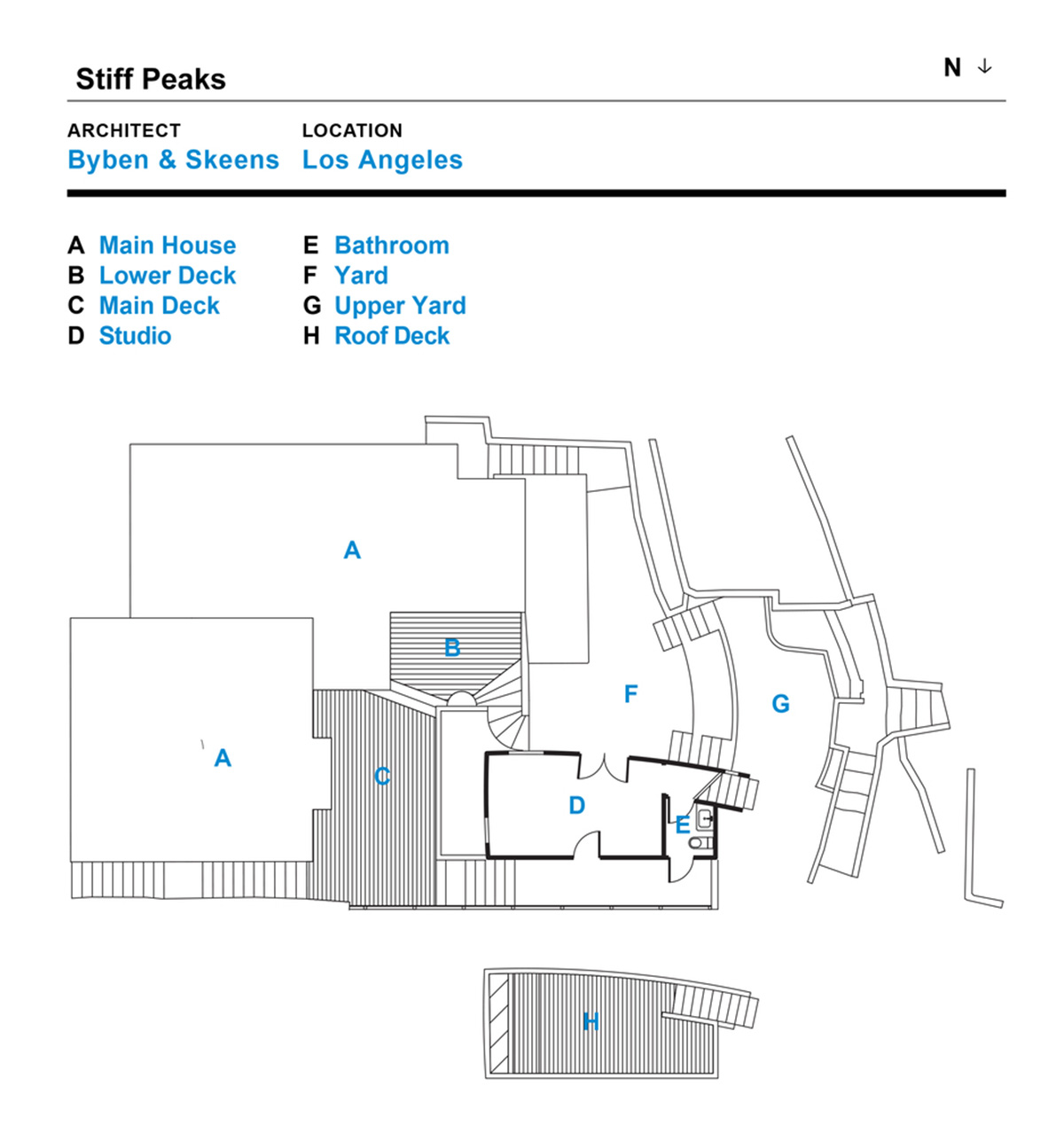 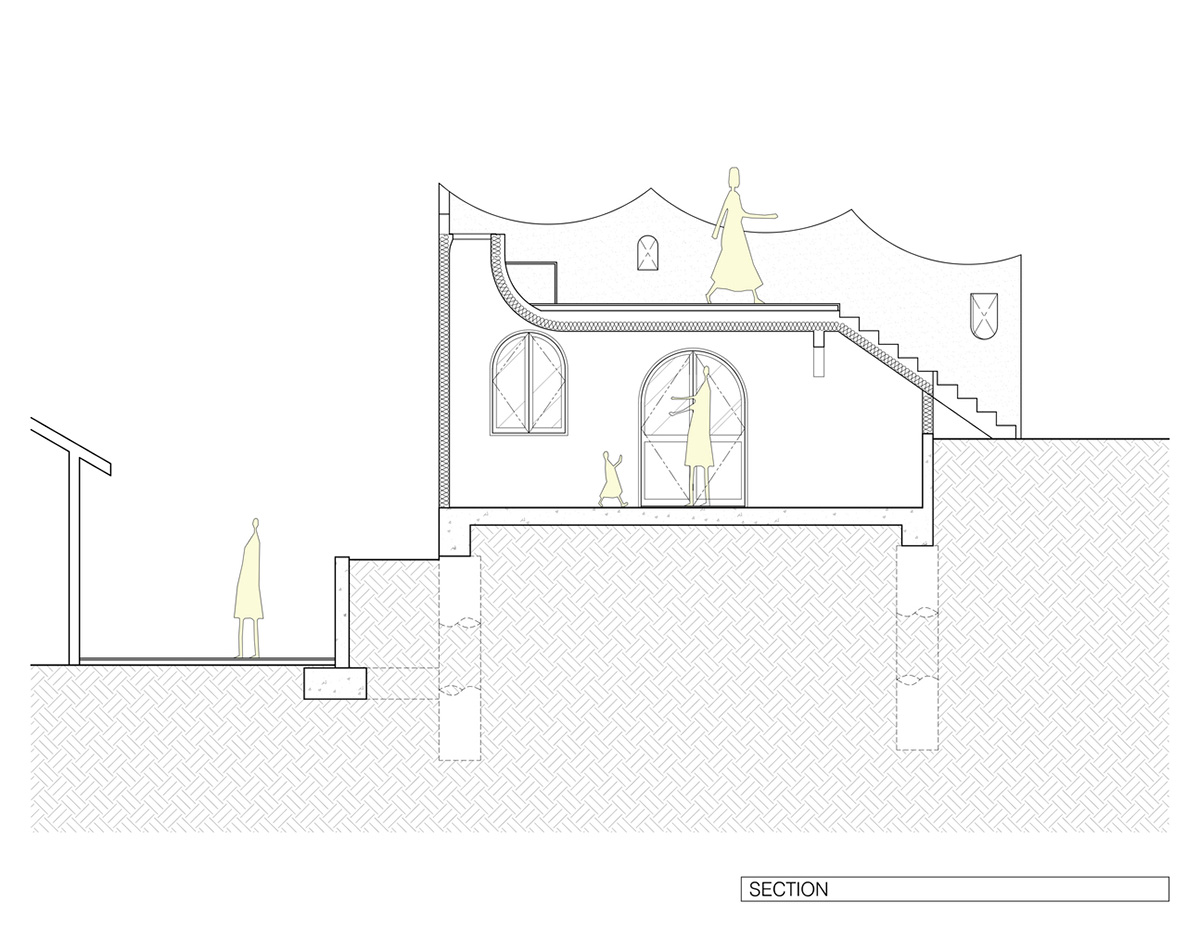 The house presents a playful and poetic feeling for the filmmaker to create writings and poets in this house. The scale of the house is also perceived from the interior as everything is designed as minimal as possible.