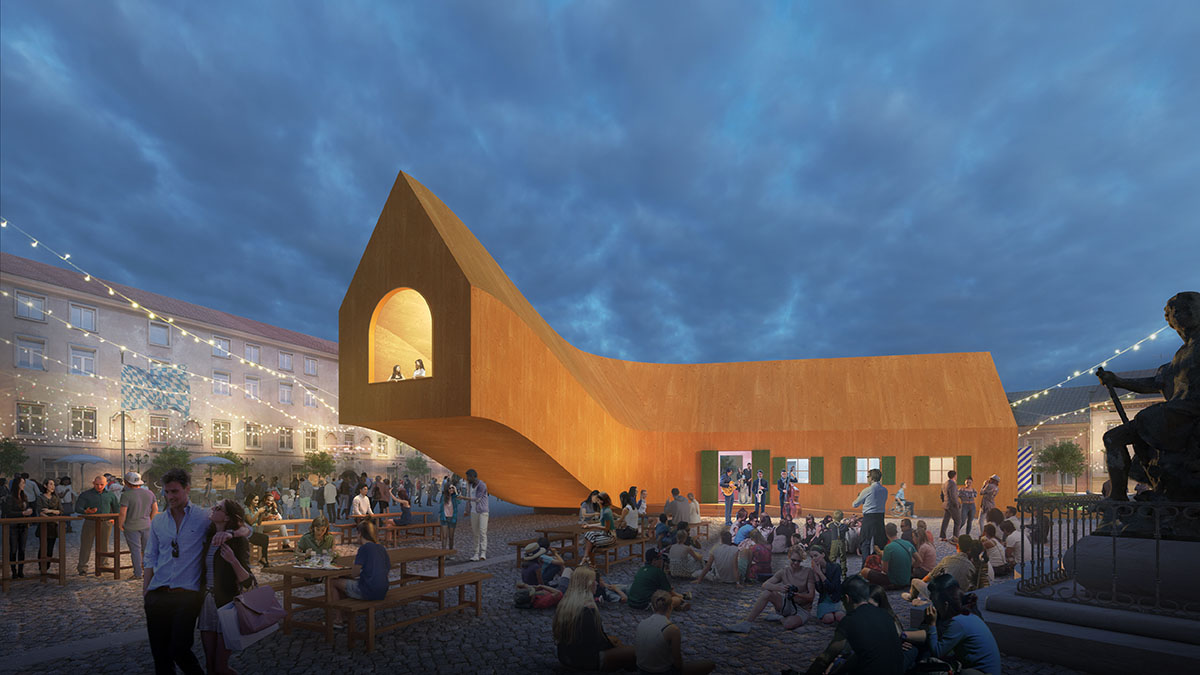 MVRDV has revealed design for an exhibition pavilion which will be built as part of the celebration of the 500th anniversary of the Fuggerei, the world’s oldest social housing complex.

The Fuggerei is the brainchild of merchant Jakob Fugger, since 1521 it has provided a place for people to live with dignity, charging a constant, unchanging rent of just one guilder a year – or 0.88 euros in modern currency.

"In our current times of housing shortage, climate crisis, social inequality, and isolation, the sustainability-oriented and people-centered concept of the Fuggerei provides a global role model, and offers a response to the great social and ecological questions of our time," said MVRDV.

In celebration of the Fuggerei’s 500th anniversary, the Fugger Foundations commissioned MVRDV to design an exhibition pavilion which will create an interdisciplinary debate that places the Fuggerei’s guiding principles at the centre of attention over the course of several months. 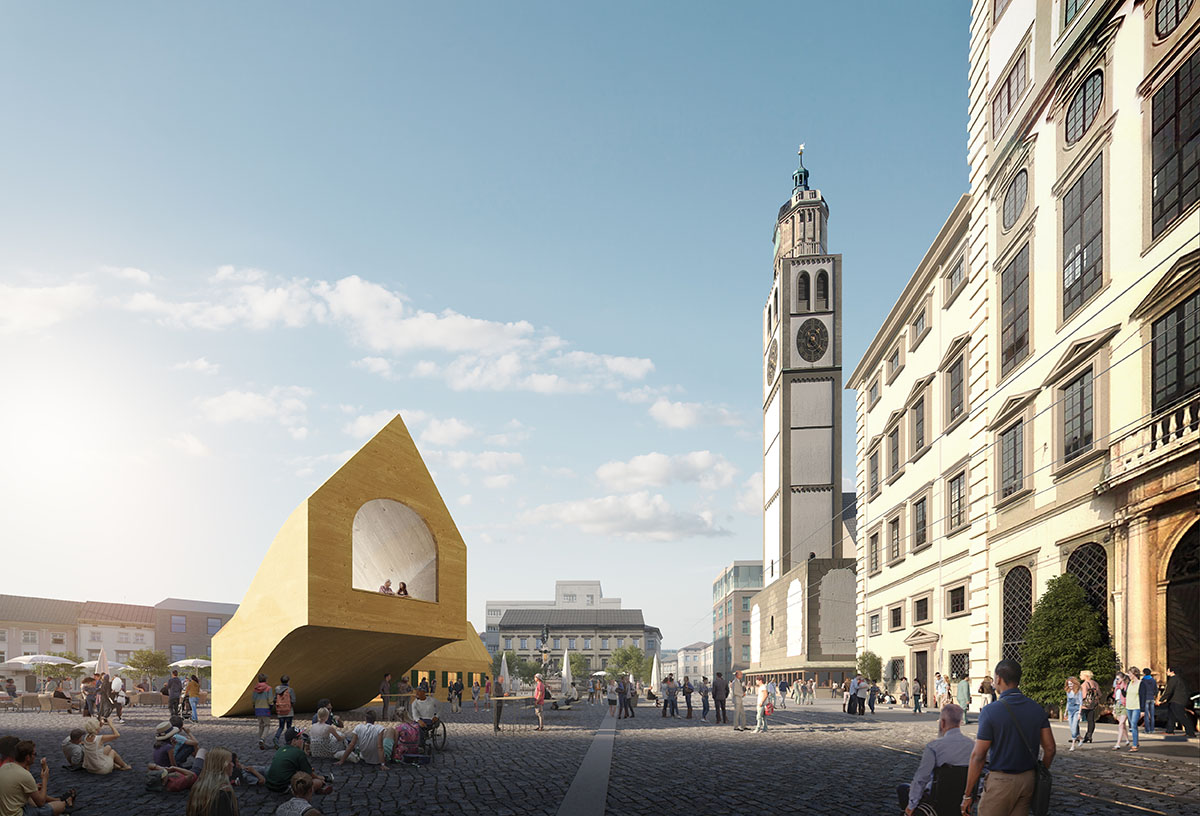 For the pavilion, MVRDV designed a curved pavilion in which half of the pavilion is raised to form an 8.5-metre cantilever that provides a lookout point to view the town hall itself.

Designed as part of the celebrations marking the 500th anniversary of the Fuggerei social housing in Augsburg, Germany, MVRDV’s vision will contribute visions for future Fuggereien, as well as the design for an exhibition pavilion to open in Augsburg in May next year.

The pavilion will open to the public as a new venue for lectures, presentations, and other events about the future of social housing from May 6th, 2022.

The anniversary year will kick off with the celebrations in Augsburg on August 23, 2021, exactly 500 years after the founding of this pioneering social innovation.

The culmination of these conversations will include prominent leaders from the field of architecture, science, politics, culture, and religion. These conversations will also be supported by a series of studies designed by MVRDV for future Fuggereien around the world, as well as a "Fuggerei Code" for the future of social housing.

All lectures will be presented in a pavilion outside the Augsburg town hall, also designed by MVRDV, beginning on May 6th 2022.

The pavilion has a long, narrow gabled structure, and MVRDV is inspired by the long terraced houses of the Fuggerei itself for the pavilion design.

Rather than a single straight shape, one end of the pavilion is curved, pointing towards the Fuggerei from its location on the town square, and raised to form an 8.5-metre cantilever that provides a lookout point to view the town hall itself.

In the end of this raised part there will be a sloped tribune, which will allow the pavilion to host lectures, presentations, and other events during the interdisciplinary debate of the 500-year Fuggerei anniversary.

The pavilion will be built from cross-laminated timber, with its large cantilever to demonstrated the structural potential of a relatively new technology based on a sustainable material. 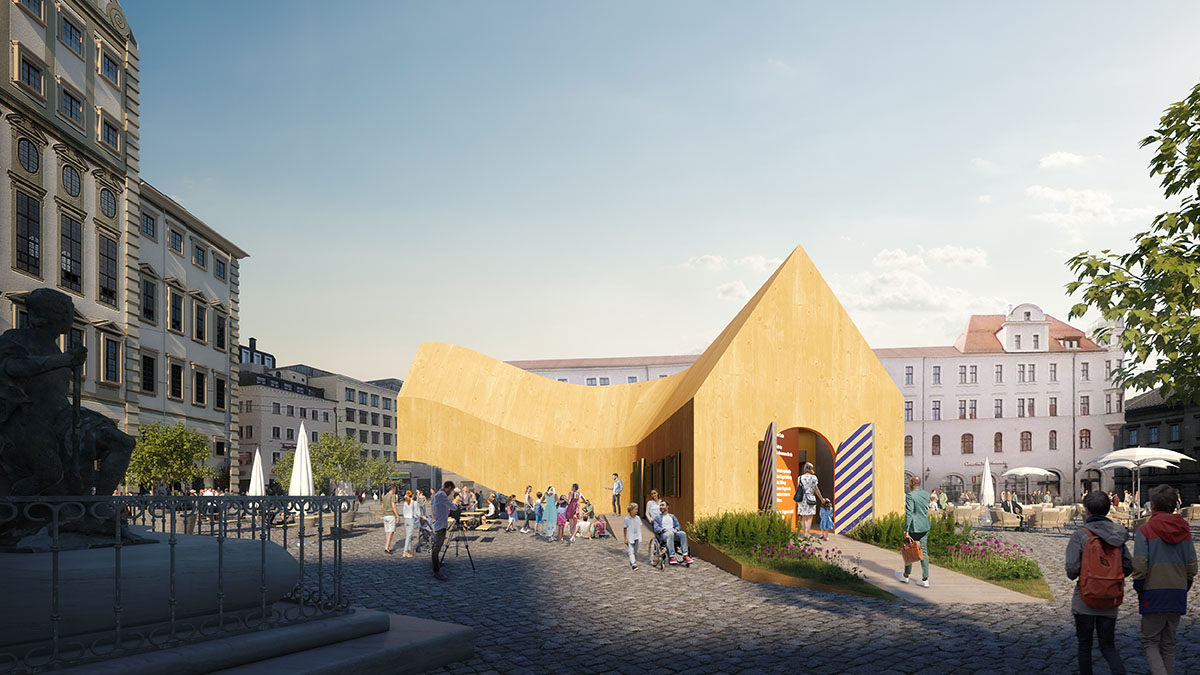 "MVRDV has a long history with housing projects – in fact one of our first realised designs was for a housing project in Amsterdam, called WoZoCo," said MVRDV founding partner Jacob van Rijs.

"Since then we have designed all kinds of housing, all over the world, from Madrid to Tianjin. But the fascinating history of the Fuggerei makes it unlike anything we’ve worked on."

"It goes to show how diverse housing can be as a topic of exploration; no matter how many approaches you imagine, there are always other ways," Van Rijs added.

"From the very beginning the Fuggerei has set standards that have the power to positively change society and provide an innovative answer to urgent social challenges," explained Alexander Graf Fugger-Babenhausen, a member of the Fugger Family Senior Council.

"The Fugger idea is for everyone, it knows no boundaries. We invite the world to be part of this anniversary."

The anniversary celebrations of the Fuggerei begin tonight, Monday August 23rd, with an official ceremony at 18.00 CEST in Augsburg.

A full programme and a livestream of the opening ceremony, which will include an appearance by MVRDV founding partner Jacob van Rijs, can be found here.

MVRDV was established in 1993 in Rotterdam, The Netherlands by Winy Maas, Jacob van Rijs and Nathalie de Vries. MVRDV is currently working on Traumhaus Funari Residential Development in Mannheim, Lankuaikei Agriculture Development's R&D Headquarters in Shanghai and on the renovation of Shenzhen Skyscraper with colorful façade.