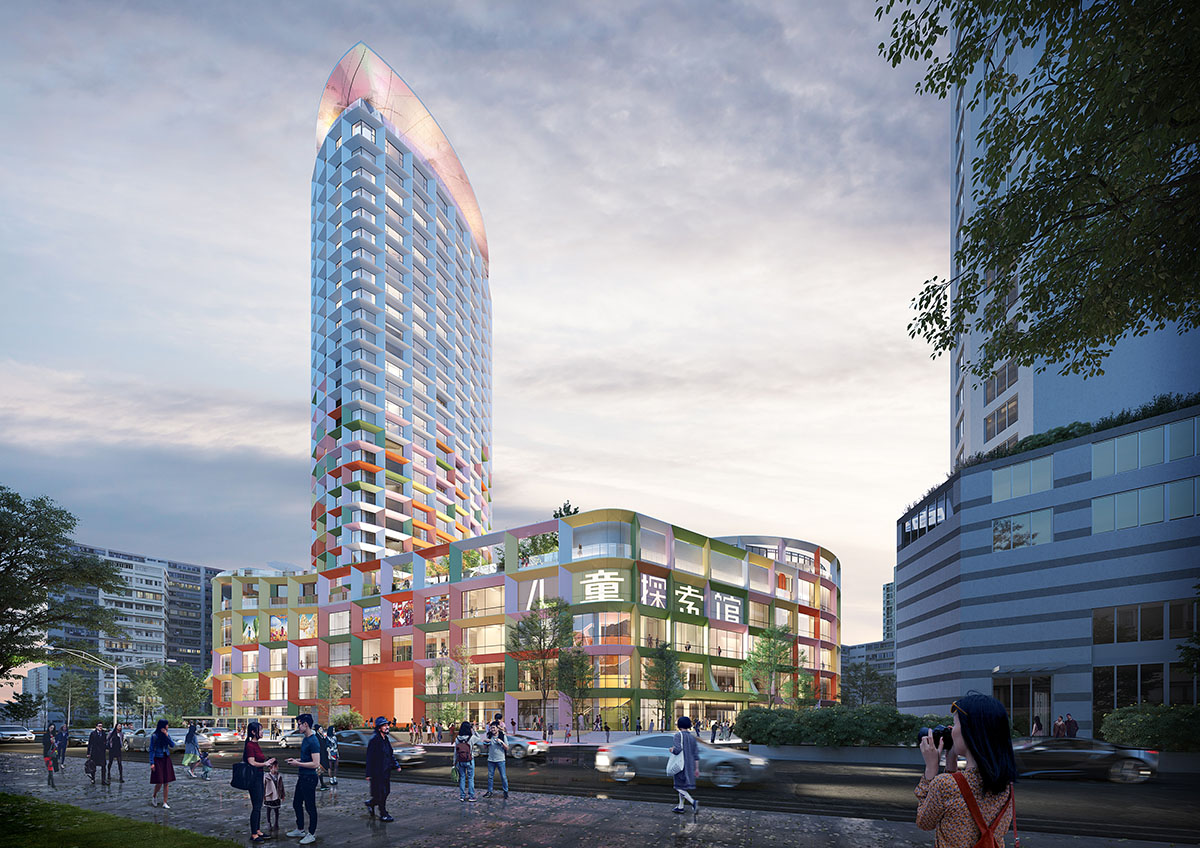 MVRDV has revealed design for the renovation of Shenzhen Women & Children’s Centre, a mixed-use building will host a wide range of facilities for the welfare of women and children - its program will include a library, a theatre and "discovery hall" for children, a women’s exhibition hall, a family service hall, and supporting facilities as well as offices and a hotel. 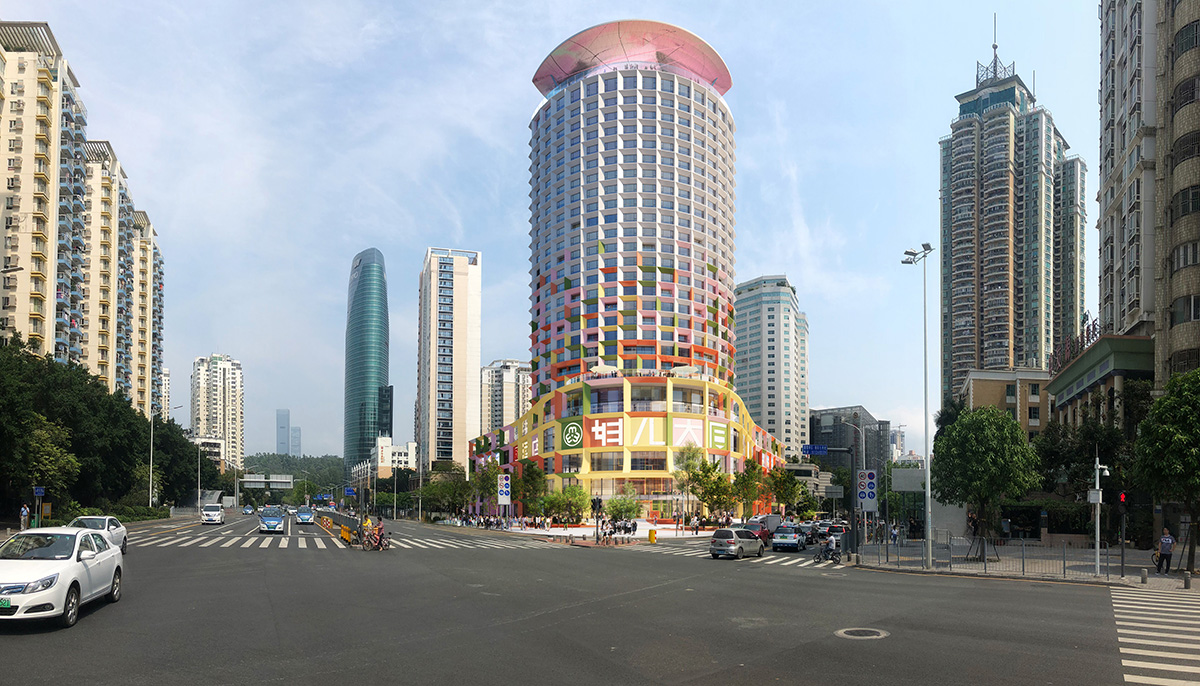 More importantly, the building is aimed to set an important precedent for repurposing buildings in a city that is soon to see a “great wave of adaptive reuse”.

"Constructed during the first period of Shenzhen’s explosive growth, the building never functioned effectively in its previous form," said MVRDV. 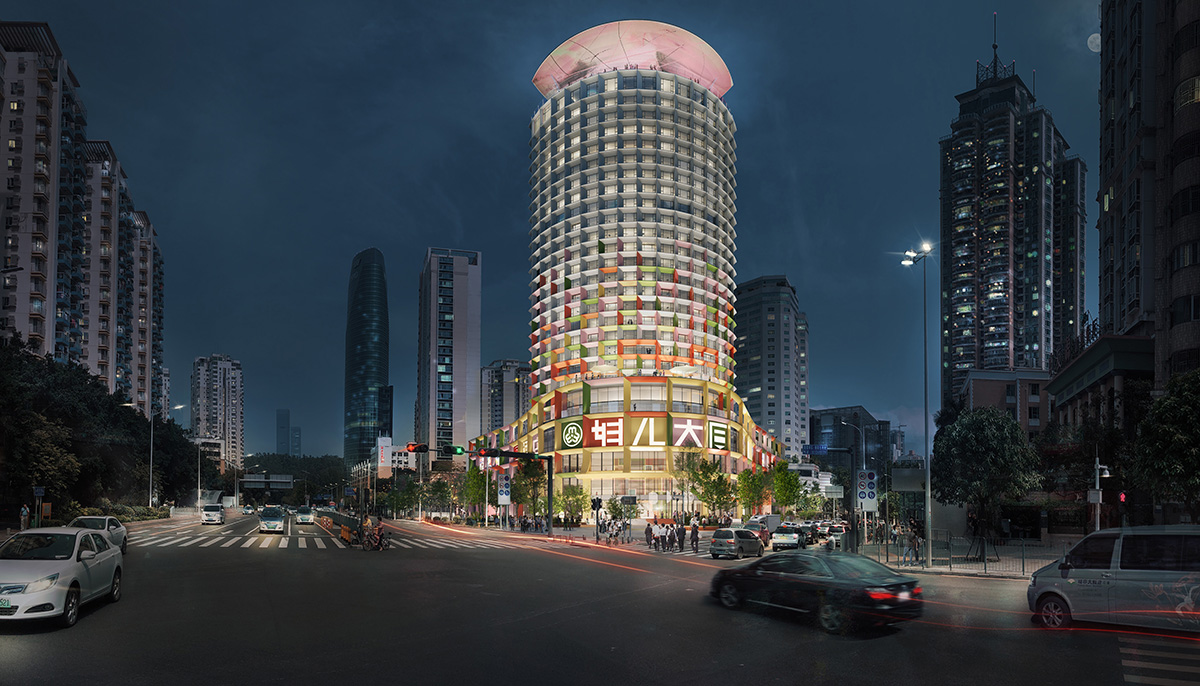 The studio added that the client initially planned only to replace the façade, but eventually appointed MVRDV to create a more comprehensive transformation including a garden on the plinth-level rooftop, new circulation elements, and a redesign of key interiors.

MVRDV’s new design scheme adds a grid of multi-coloured exterior frames to the building that will dramatically increase the façade’s depth, these frames will also provide extra shading to improve the comfort level inside and the thermal performance of the building. 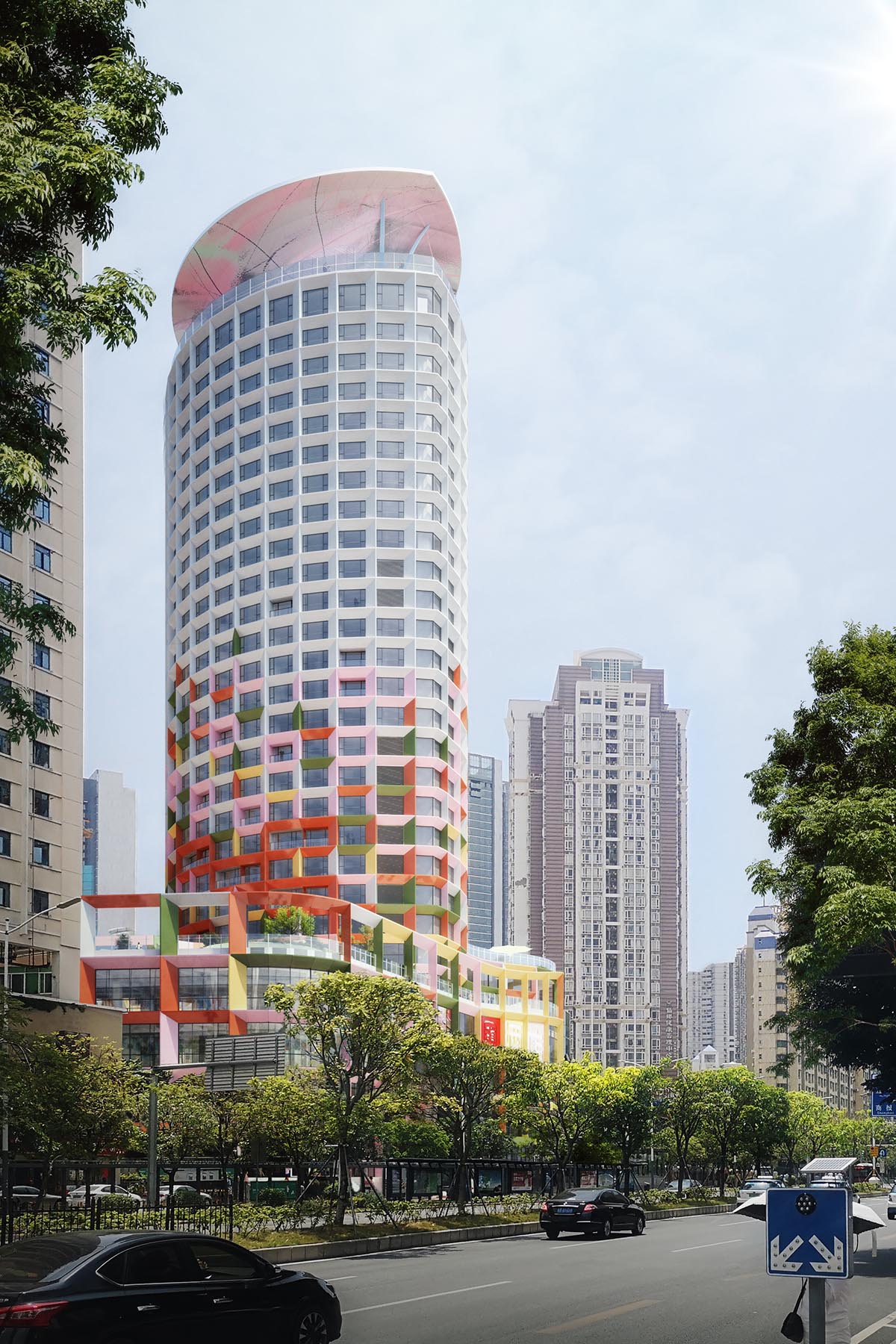 On the upper floors, the tower will host a hotel and and its lower levels, offices are designed - and mostly white. As the MVRDV team highlights, colours are also used to highlight features such as entrances, providing a welcoming atmosphere for visitors.

MVRDV transforms the central courtyard of the building, which was previously used for car parking, into a public courtyard with outdoor entertainment facilities for children. 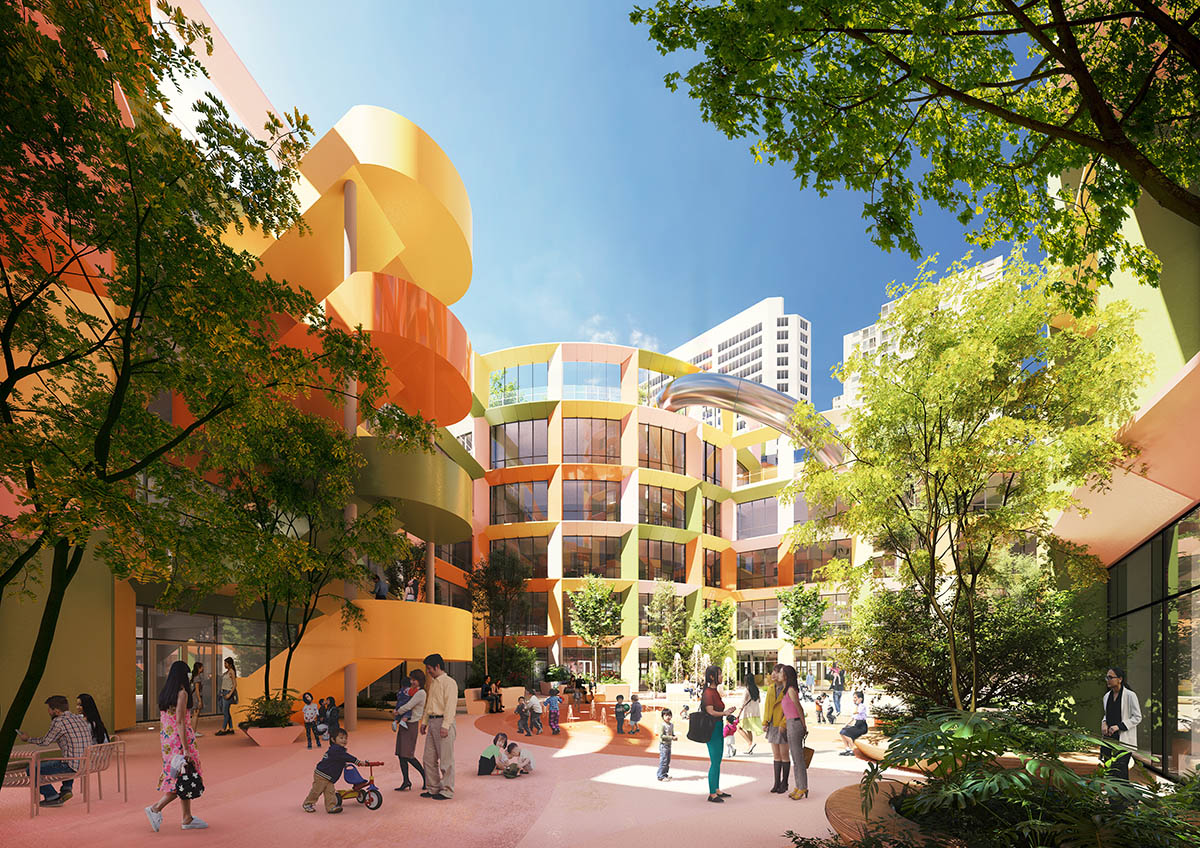 While the access to this inner courtyard is totally barrier-free, it will make the building a public venue for the city. The roofs of the plinth will feature green outdoor spaces, with one side of the building becoming an event space and the other used as an educational playground for children.

The roofs and courtyard are strongly connected, with new external staircases added to allow easy movement between the two, and even a slide to bring some joy to getting around the building. 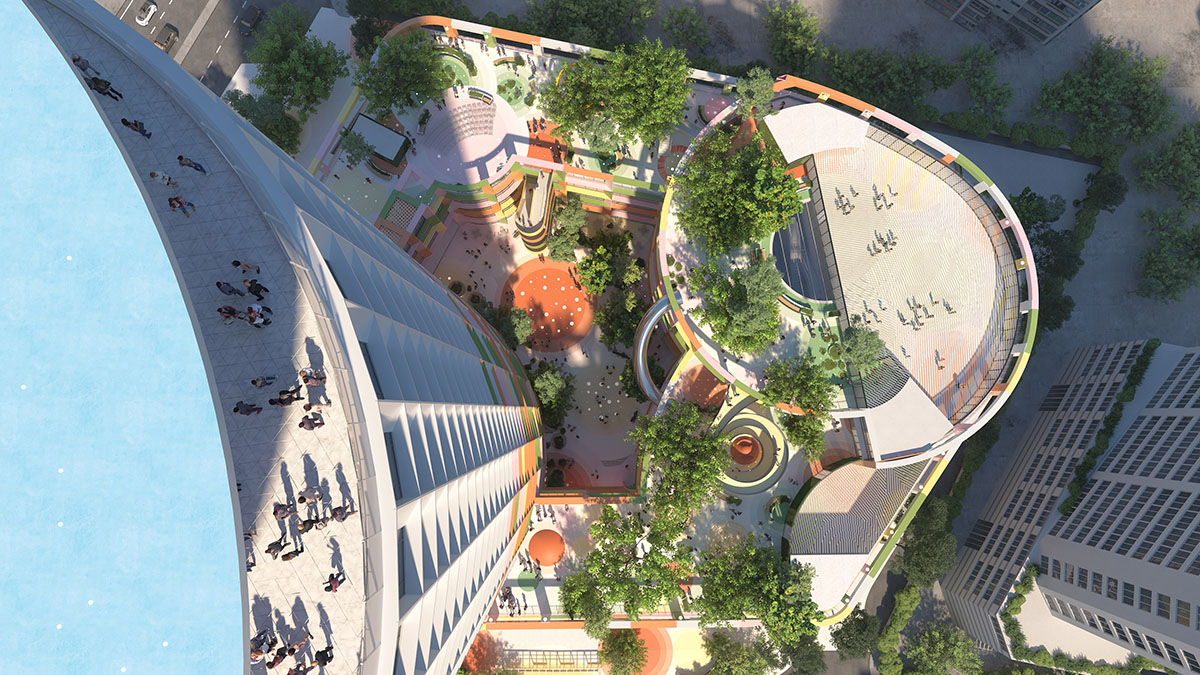 Inside, the design also transforms the two main lobbies of the building. One of these lobbies is dedicated to the tower, and the other to the women and children’s facilities in the plinth.

These interior spaces will bring the colour and liveliness of the building’s façade inside. The tower lobby includes a colourful vertical puzzle that houses educational and entertaining activities for the children. 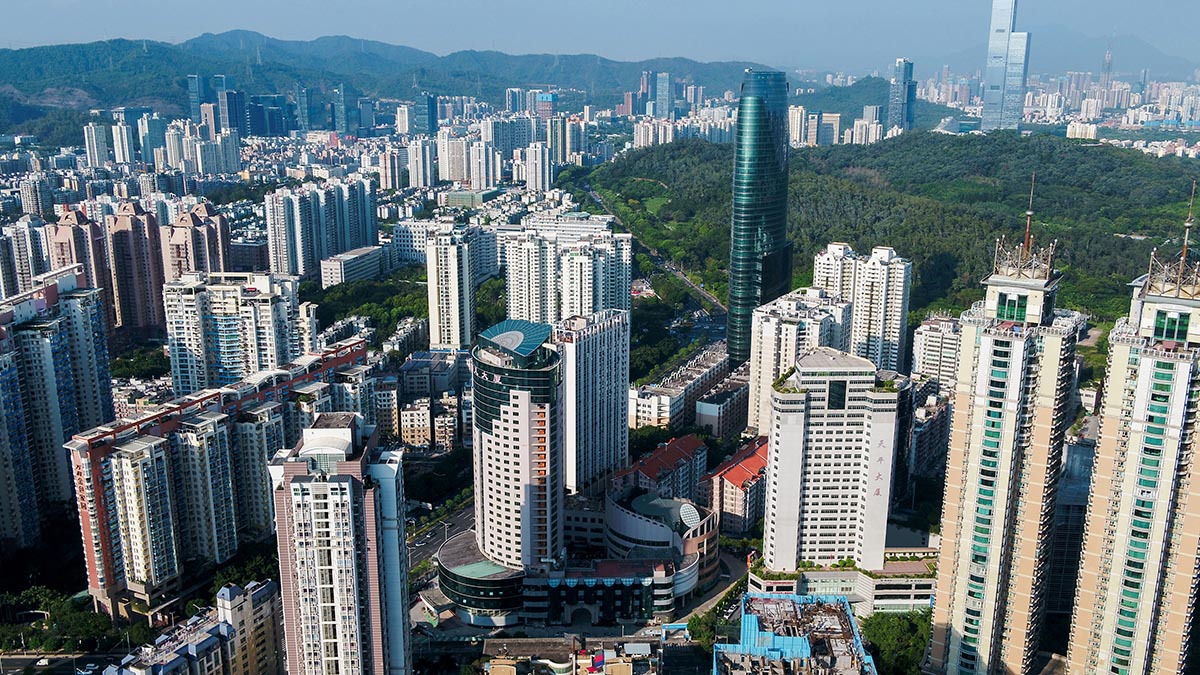 The lobby for the women and children provides a more calming atmosphere with its subdued tones, while openings punched into the shelves display fun features to capture the children’s imaginations. Alongside the rooftop event space, the design also adds a 200-seat auditorium to turn the building into a hub for sharing knowledge.

"Our design for the Shenzhen Women & Children’s Centre shows what is possible in these buildings that are reaching the end of a fairly short initial lifespan," said MVRDV founding partner Jacob van Rijs.

"Retaining and improving a building is more sustainable than demolishing and building anew, and that is especially true when the building contains as much concrete as this one, a 100-metre tower with a voluminous plinth at its base," added Van Rijs.

A large accessible terrace will offer a 360-degree panorama of the neighbourhood below and crown the tower. 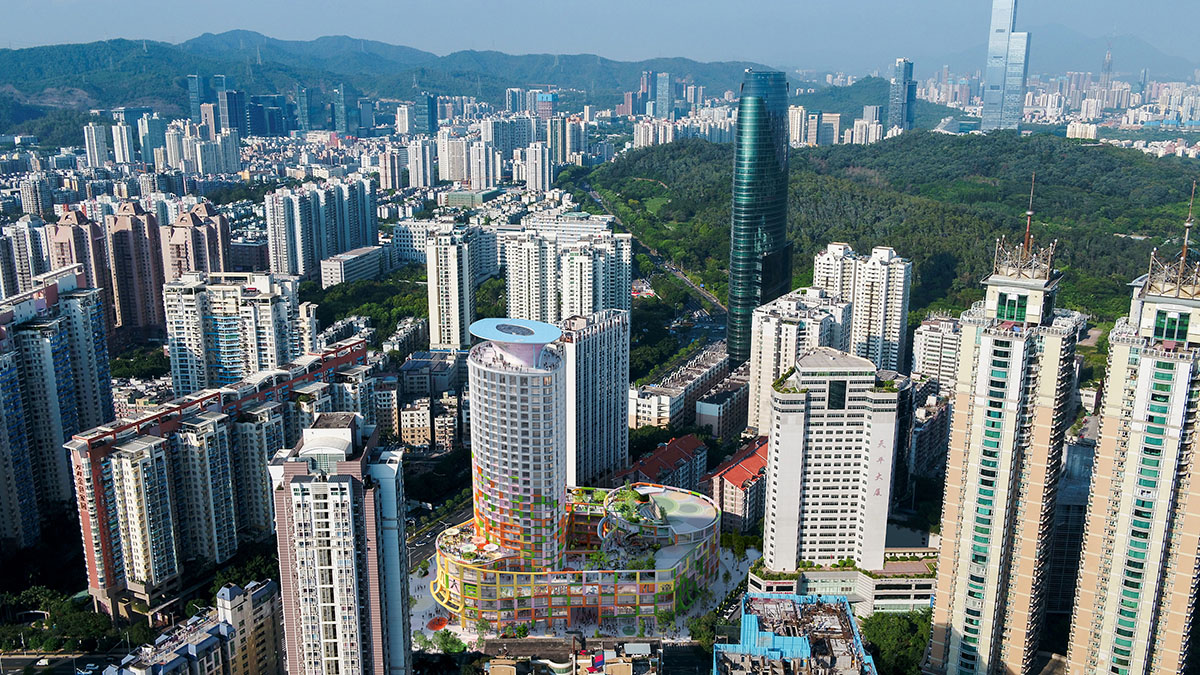 Visitors will be able to appreciate the structure, which stems from the tower core outwards: a vaulted wall featuring the work of a local female artist. Even from afar, the tower crown will become one of the most recognizable icons of Shenzhen.

Since Shenzhen’s designation as a Special Economic Zone in the 1980s, the city has experienced a faster growth rate than almost any other city in the world.

Many of the buildings constructed during this expansion prioritised the urgent needs of the time over planning for the future; just a few decades later, they are nearing the end of their initial lifespan.

The Shenzhen Women & Children’s Centre is therefore a preview of what could be an emerging trend in the city. 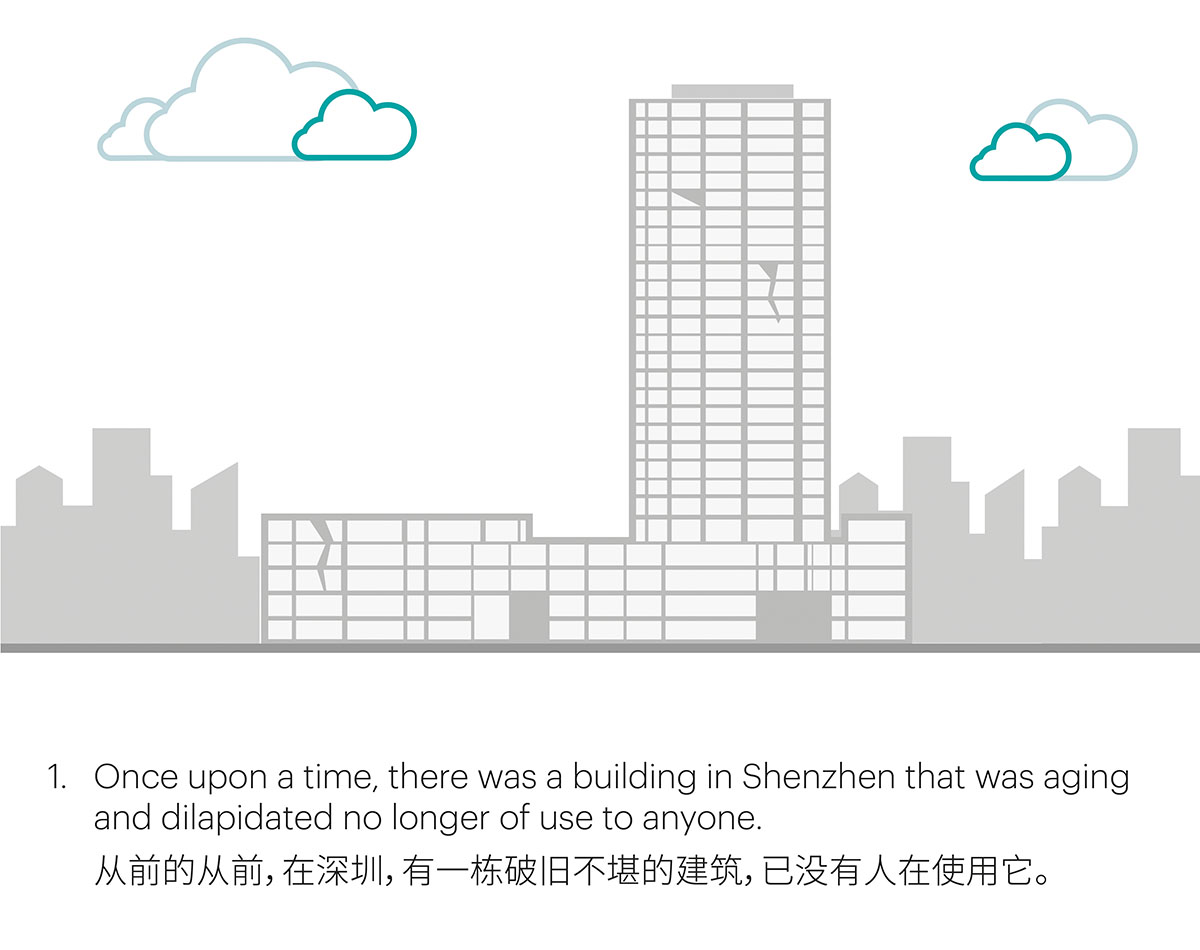 "Considering its development history, Shenzhen could soon see a devastating tsunami of unsustainable demolition – or it could ride a great wave of adaptive reuse," added Van Rijs.

"It’s an important time to show how great and joyful this approach can be." 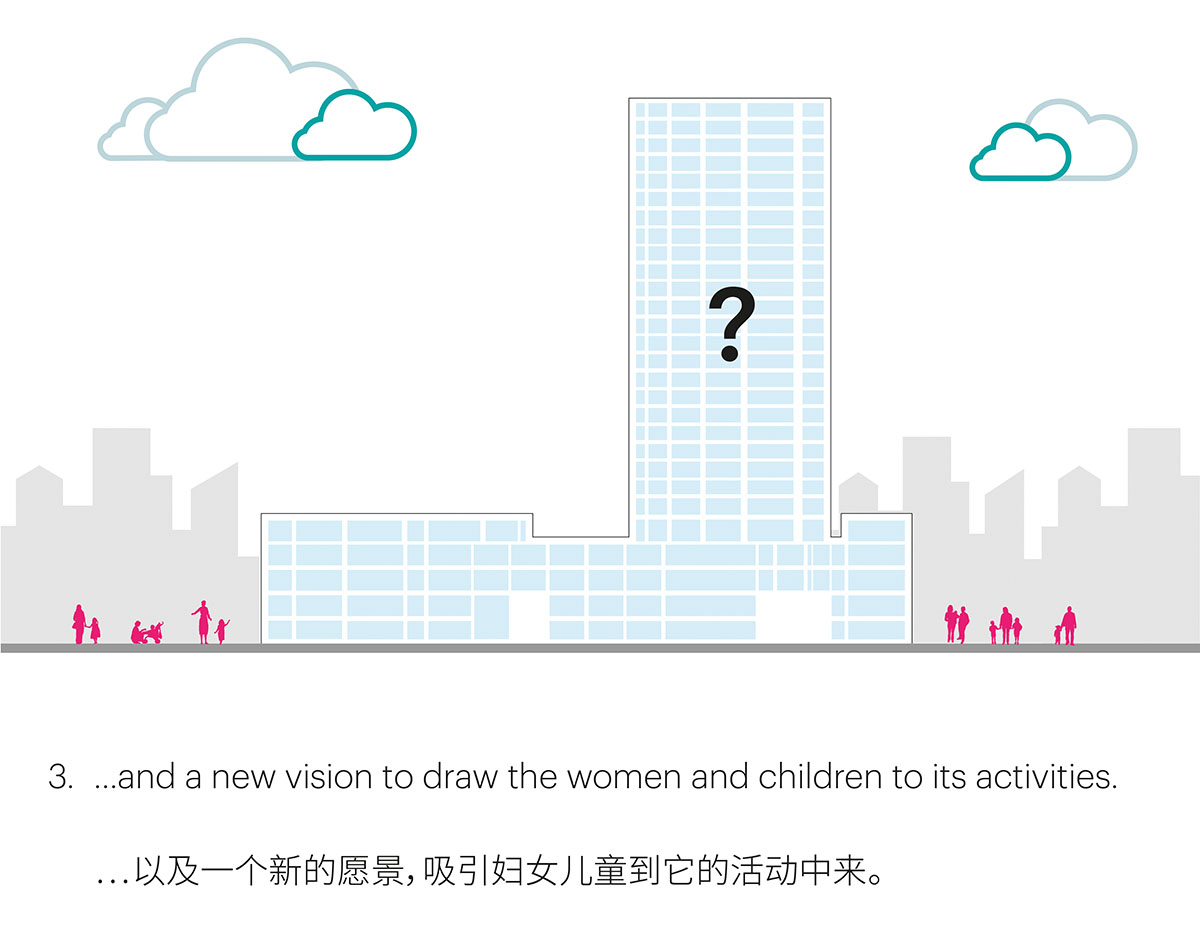 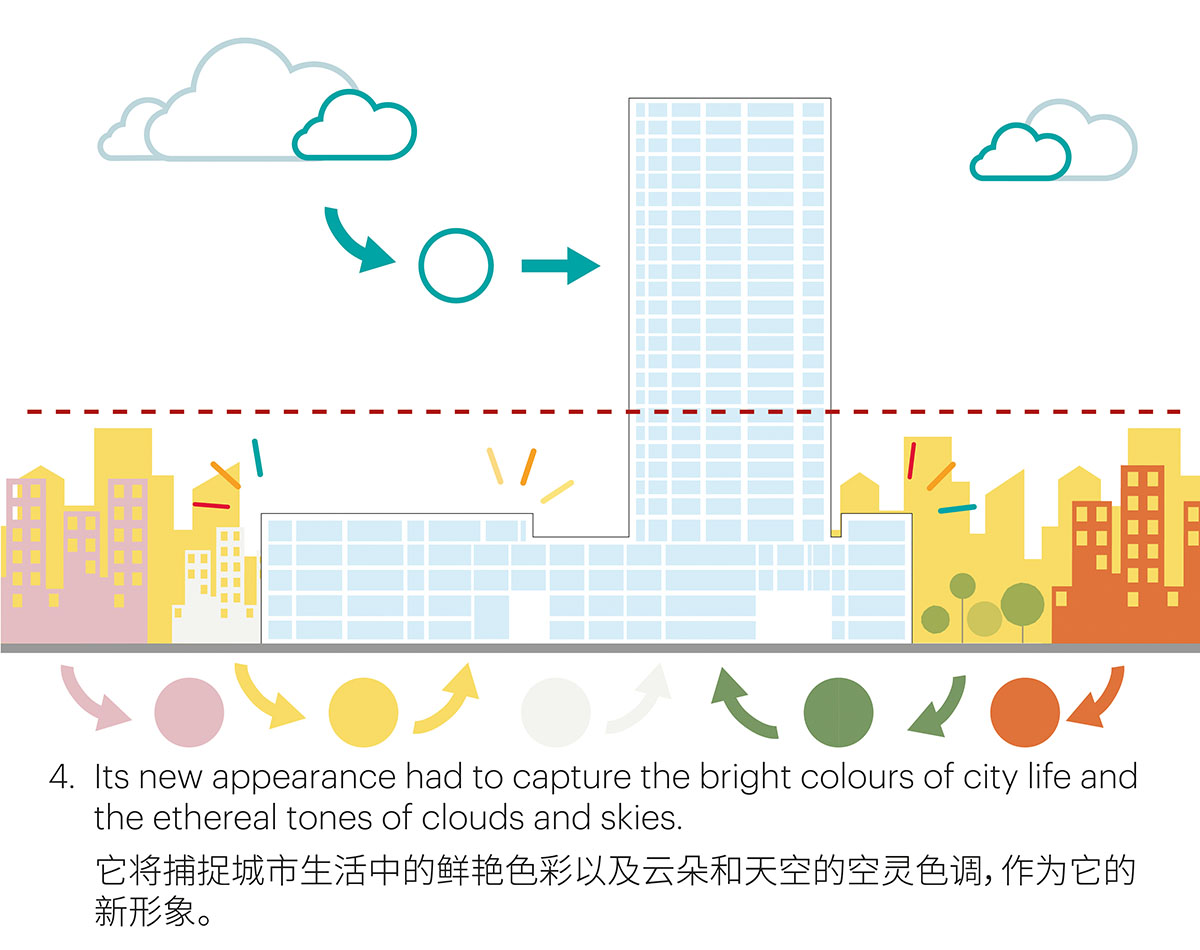 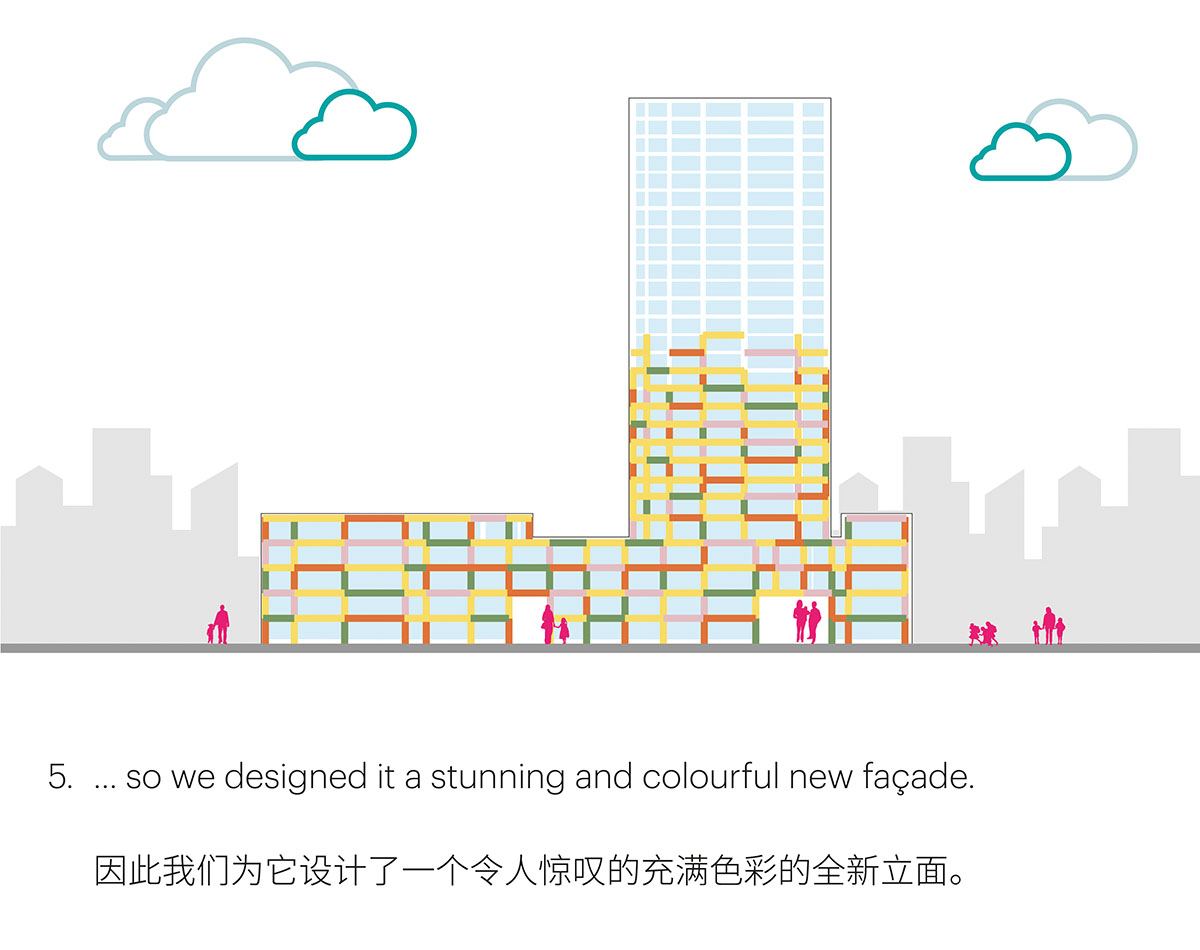 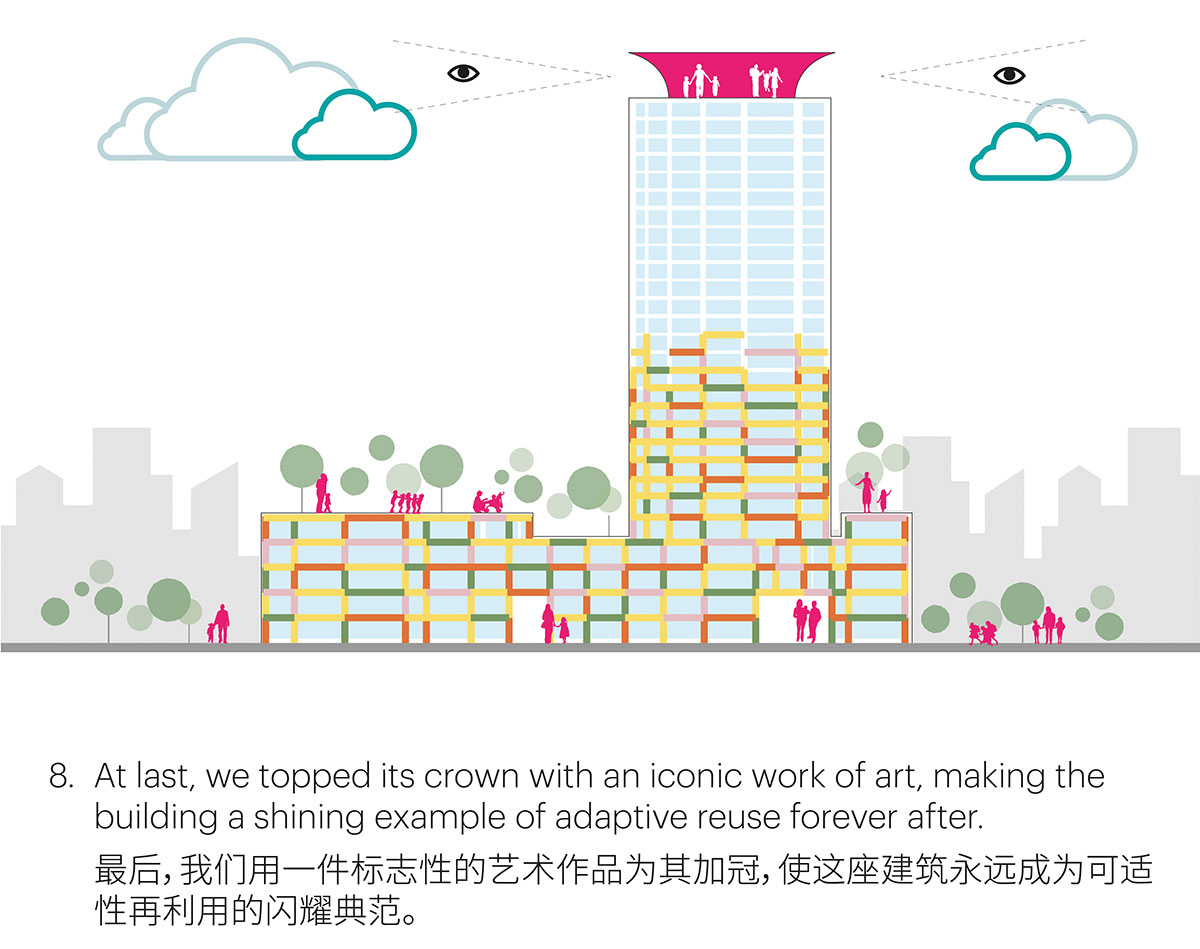