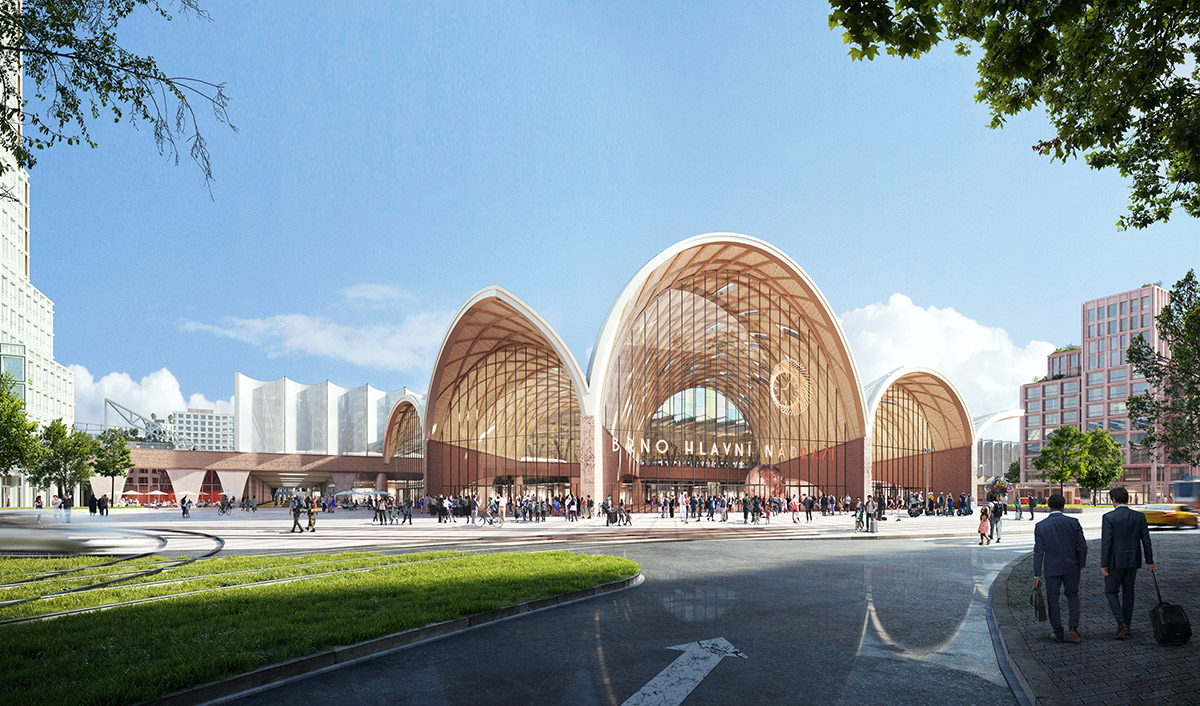 The team's proposal was selected from among 46 applications, with twelve design teams including renowned architecture offices like BIG, Diller Scofidio + Renfro, OMA, Snøhetta and Ingenhoven.

Organized by the city of Brno, it was the largest architectural competition in the history of the Czech Republic. As the jury stated, the winning design "combines a reference to historic public buildings with a modern intermodal hub and a high quality public space." 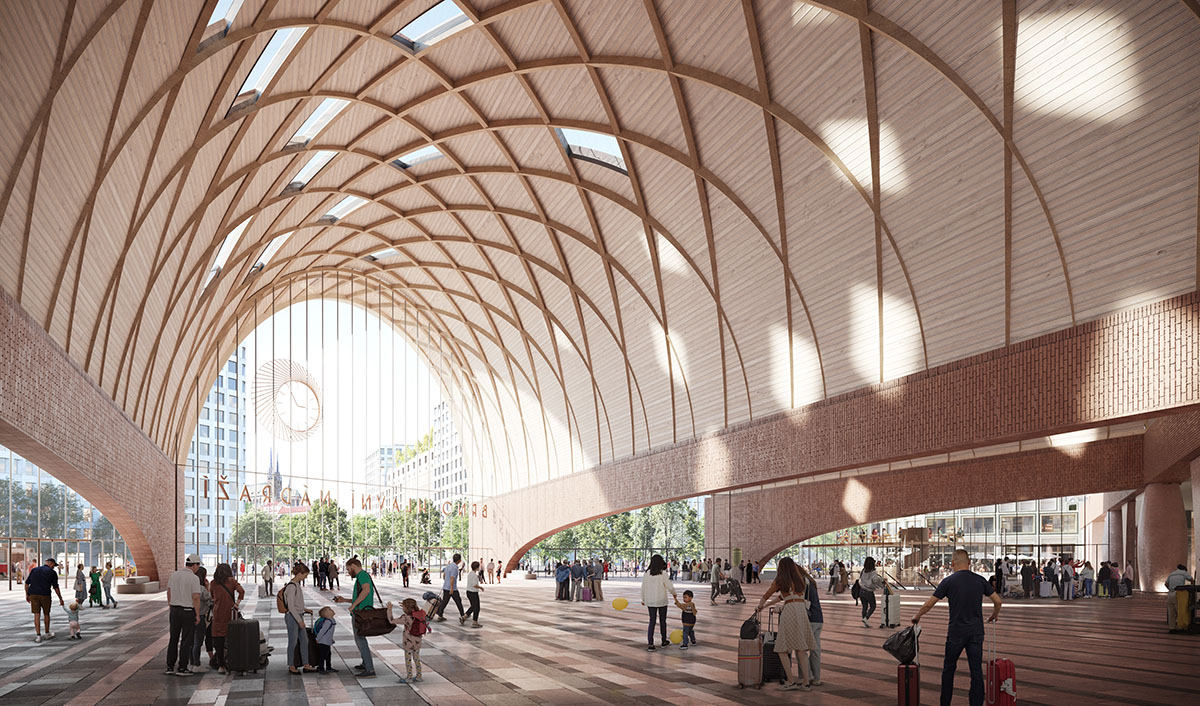 "The design emphasizes the Brno's genius loci and proves a careful assessment of the practical functioning of the new station building and its surroundings," the jury added.

The new station has been conceived as a catalyst for the city of Brno, it will develop physically and mentally the new district as an integral part of the city.

Offering a comprehensive solution for a multimodal transport hub, the scheme includes 14 platforms for highspeed and local trains, tram-and city buses, a regional bus station including 40 stops, a metro station, a bicycle and car parking. The station building offers comfortable passenger services, facilities and has ample retail and F&B areas.

The design further includes an urban development with offices, housing, hotel and high quality public space including a waterfront park and urban promenade. 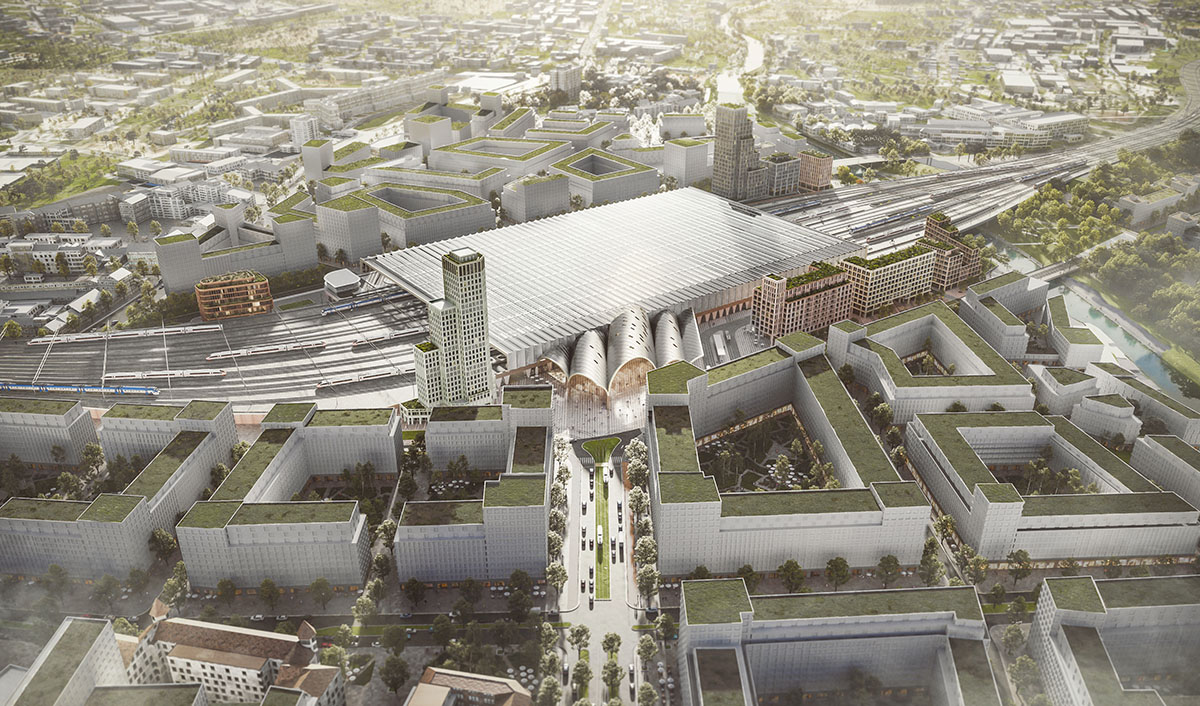 "The station represents a marvellous opportunity to create a new and vibrant district in Brno. The simple and elegant design of Brno’s new railway station will be the catalyst and new heart of the new city. Tree-lined boulevards connect the station with the City centre and the Cathedral with the Svratka River Park, said Martin Biewinga, partner of West 8.

The Brno station is designed as pedestrian-friendly

The design team has put passenger's movement and pedestrian flow to the core of design. Creating a barrier free district, the design both weaves and embeds pedestrian routes into the urban fabric and concentrates them through high quality passages in the railway body.

The urban layout of the station district allows for an optimal layout for all modes of transportation. By putting people first, all traffic modes are safely untangled.

"The new Brno main station is both grand and human, monumental and tangible. Our design combines a straightforward, yet very comfortable platform canopy with a sensual station building," said Pascal Cornips, partner of Benthem Crouwel Architects. 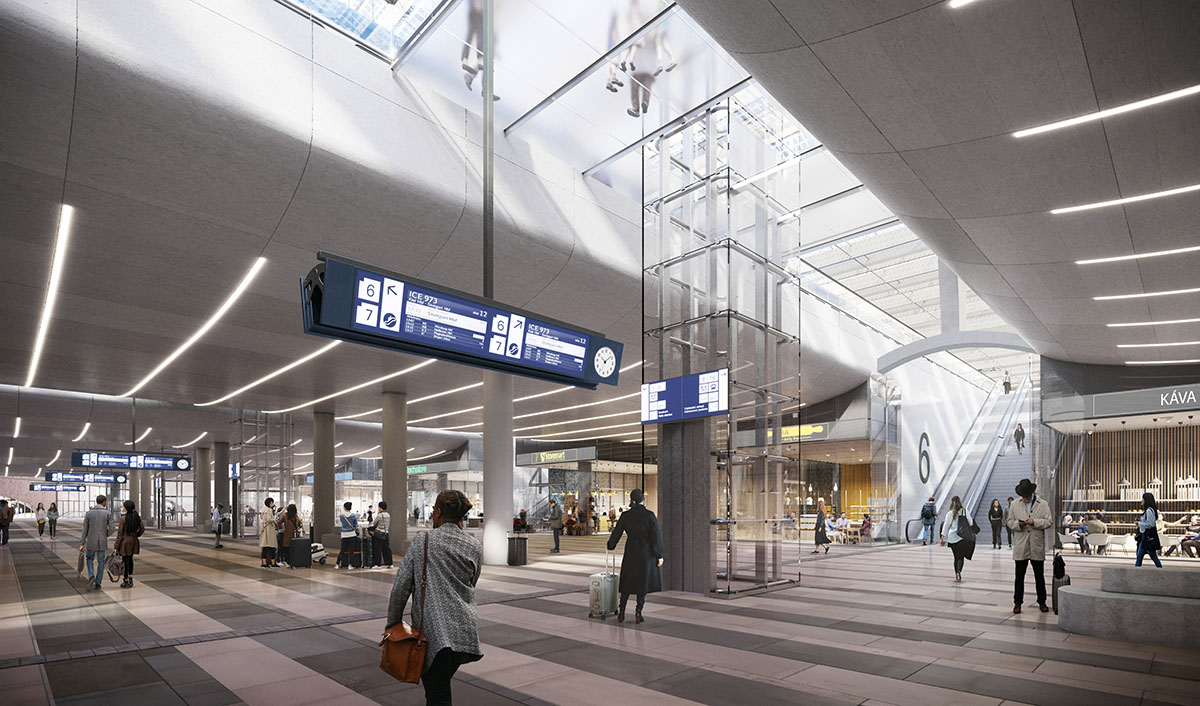 The station is connected to the city

Three monumental arches define the station, which is entrance of the building, and at a first glimpse of Brno’s cathedral, the station is perceived from afar.

"This composition provides a quiet backdrop in the direction of the tracks, but opens up towards the city to allow unobstructed views towards the skyline," said the team.

Passengers are guided through the central concourse, articulated by the rhythm of voids for access to the platforms, towards a pedestrian promenade which leisurely connects the station, waterfront park and new urban development to the city fabric.

A generous boulevard aligned with city blocks and workspaces follows the station to the river, where, under the railway bridge, the Svratka waterfront park continues.

"The arched station building is the highlight of a new urban frontage and welcomes the traveller," said Penne Hangelbroek, Architect, West 8. 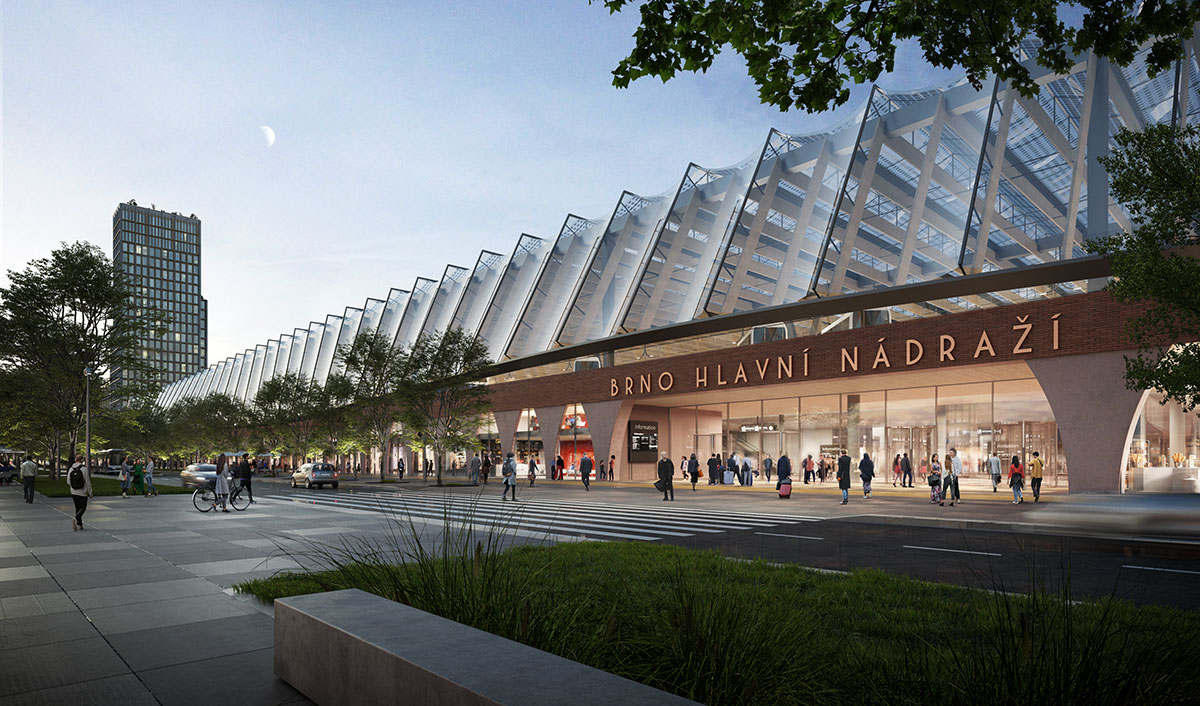 The architectural language of station reflects the rich history of Brno

The design scheme has strong connections and references to the cultural heritage of Brno with the implementation of a public welcome hall, a space between the city and train platform, as the jury stated.

The station hall offers a public interior to the inhabitants of Brno as well as organises and highlights the urban frontage of the new district. The location as a whole is marked by two diagonally positioned towers that situate the new station’s position within Brno’s silhouette.

The central concourse, with its access to the train platforms, clearly and intuitively connects to two station halls on either end of the passage. Conceived as two, covered, public squares, they house the connections to metro, bus, parking, retail and passenger services. In these halls, passengers are able to easily encounter and orientate themselves within the station via direct sightlines to the next step in their journey - be it the city or beyond! 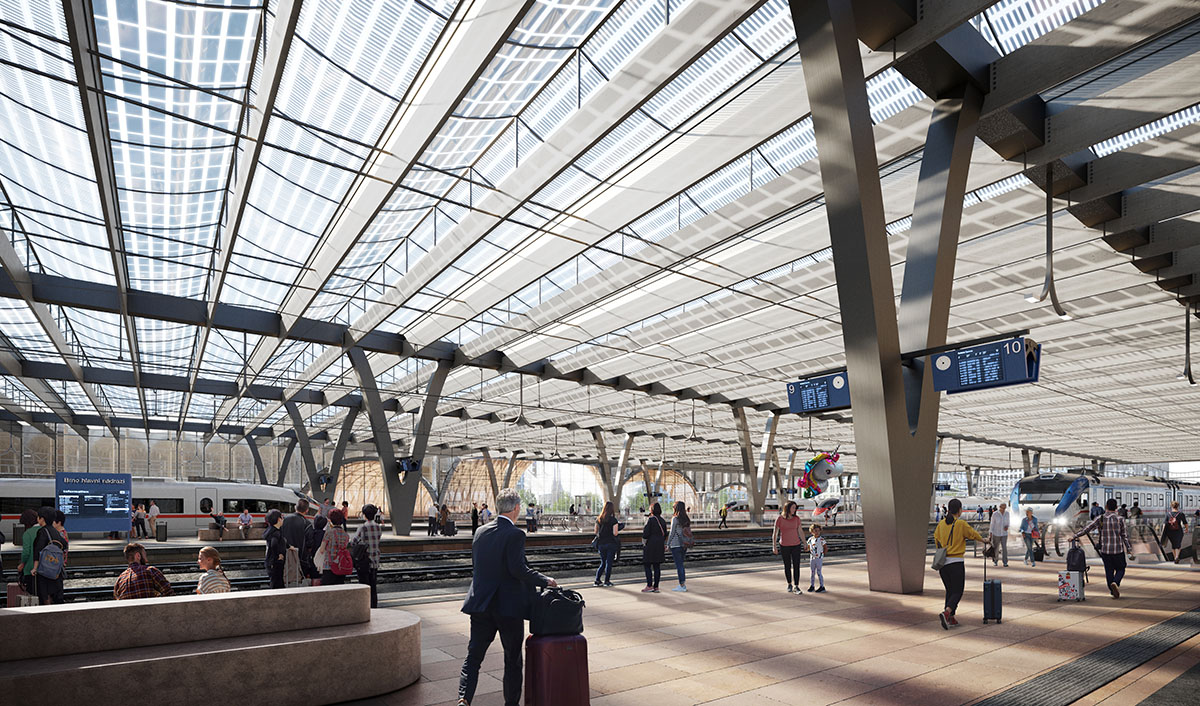 The new station will be environment-friendly

The team also applied sustainable principles to the station to create a net-positive station.

The design features an elegant, convex glass canopy over the train platforms and bus station - it not only shelters passengers from rain or harsh sunshine, but simultaneously collects enough solar energy to create a net-positive station.

The team uses bio-based materials such as Cross Laminated Timber (CLT) in roofing structures and as cladding. To reduce the carbon footprint of the station, the team significantly reduced the length of the viaducts so the use of reinforced concrete is decreased.

The environmentally aware design also integrates nature based rainwater management, the use of (filtered) daylight, natural ventilation, and low temperature floor heating and cooling based on a reversible heat pump connected to a geothermal source. 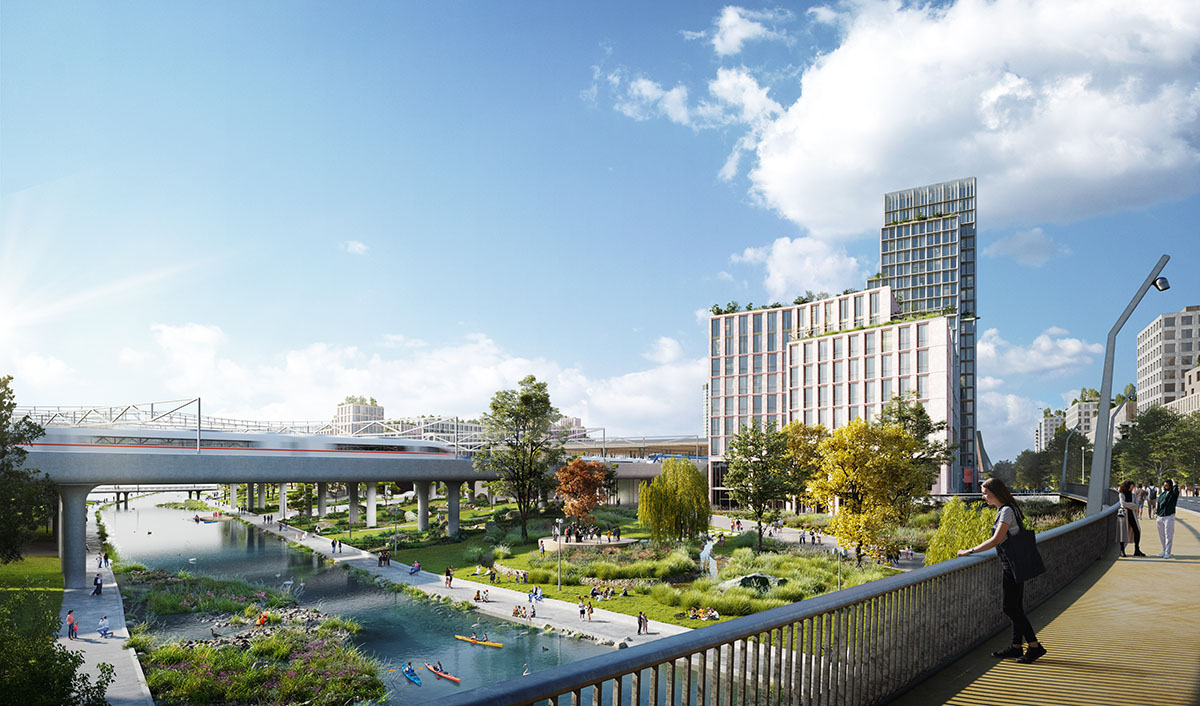 West 8 is an award-winning international office for urban design and landscape architecture, founded in 1987 with offices in Rotterdam, North America and Belgium. West 8 is currently working on the Tuchkov Buyan Park in Russia.