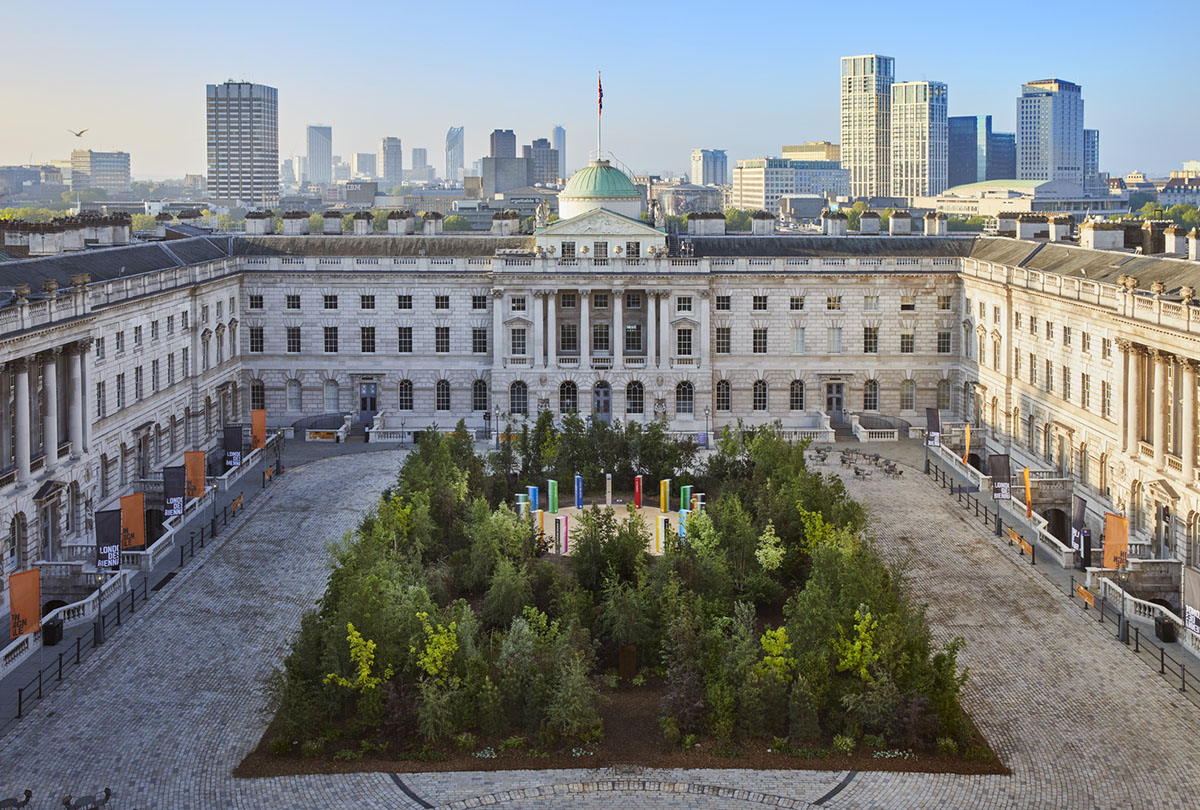 The installation, named Forest for Change, the installation has been created as part of the London Design Biennale in collaboration with landscape designer Philip Jaffa and Scotscape. 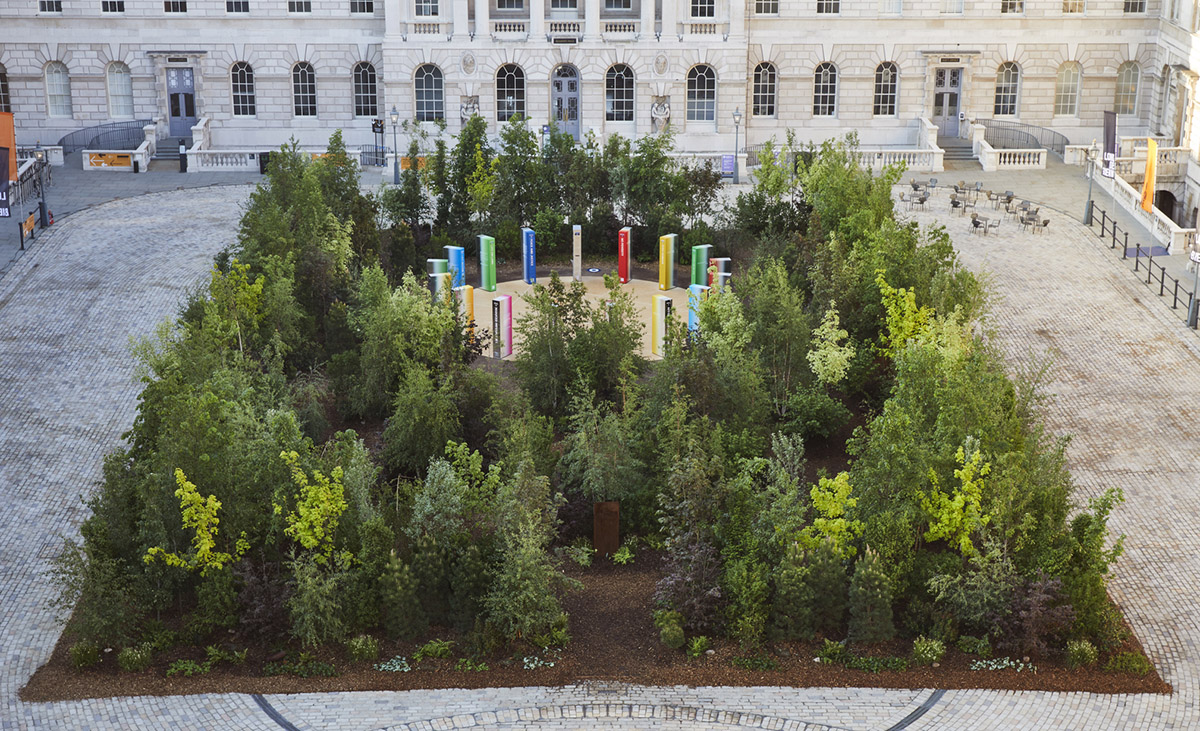 The initiative was agreed in 2015 by world leaders to achieve 17 goals to create a better world by 2030 by ending poverty, fighting inequality and addressing the urgency of climate change.

The forest comprises more than 400 juvenile trees, the majority of the trees were sourced from one of the UK’s leading tree growers.

They have been individually selected for their differing canopy shapes, heights and forms to achieve a layered aesthetic and to shroud the glade where the Development Goals lie at the heart of the experience. 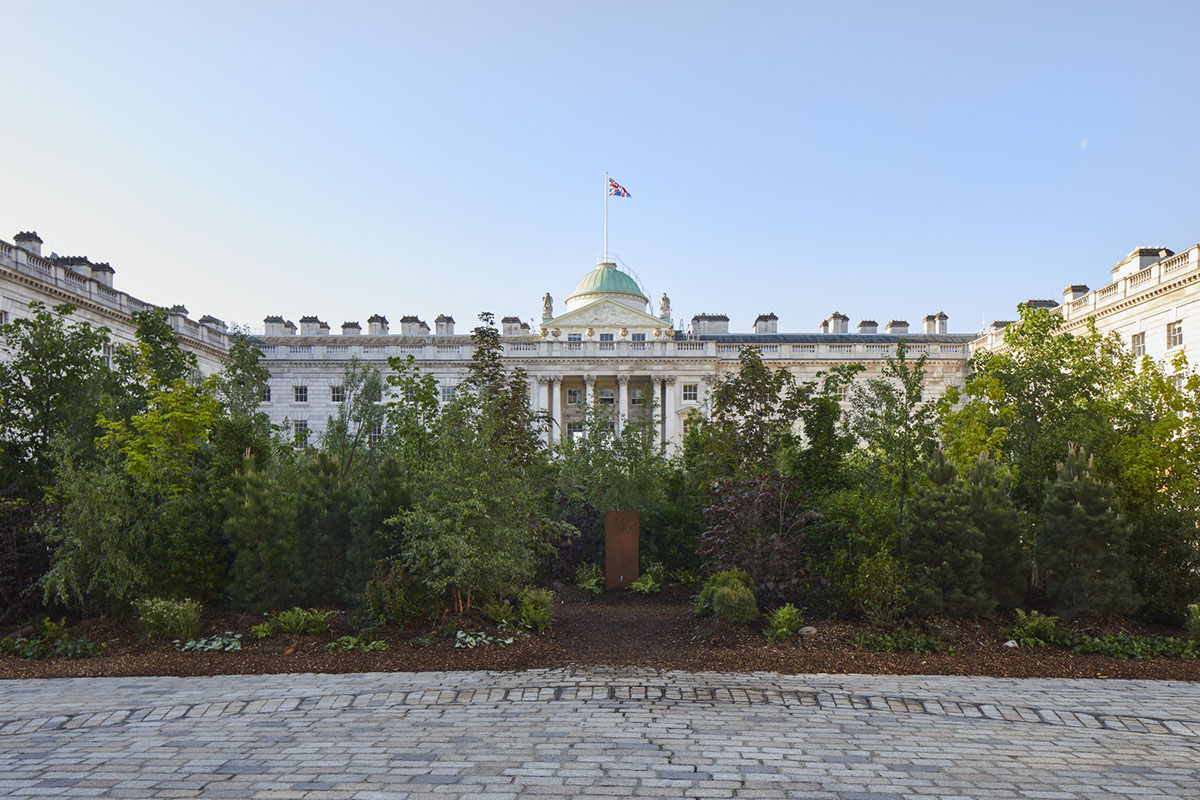 To highlight the plight of trees in urban environments due to climate change, the team chose a diverse range of 27 nursery grown species with the aim of ensuring resilience in the London environment. These include many favourite common species such as Scots Pine, Hazel and Silver Birch.

According to the team, the existing courtyard floor is an unmovable hardscape of cobbles, for this reason, the trees will remain in their containers for the duration of the event and these will be covered in bark mulch mounds underplanted with forest floor species such as periwinkle, ivy and ferns.

A sculptural array of logs and branches will also be spread across the ground to suggest the sights and smells of centuries-old woodlands. Once visitors start their journey, they start to hear a birdsong in a soundtrack curated by pioneering musician Brian Eno.

At the heart of the forest, the team cleared the space with a new pavilion consisting of seventeen mirrored pillars, each of them reaches over 2 metres, representing the UN's Global Goals. 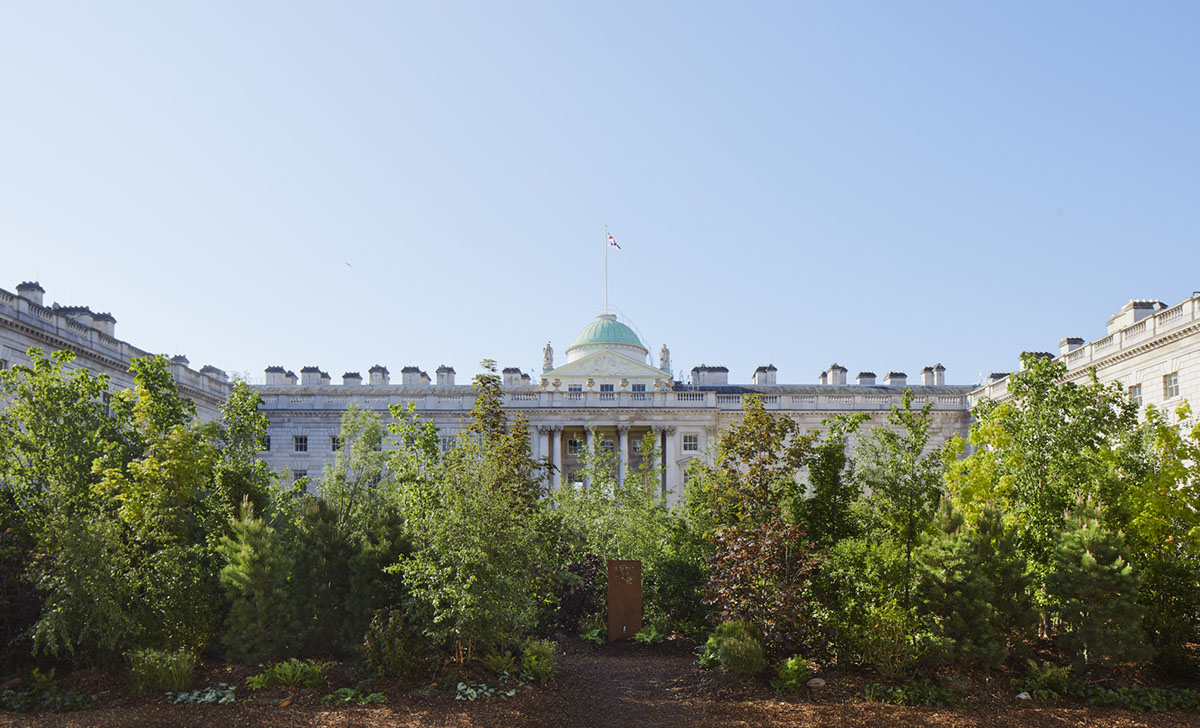 The team highlights that "the environmental impact of Forest for Change has been an important consideration throughout."

"All the trees will be donated to and replanted in London boroughs as part of The Queen’s Green Canopy initiative, creating a durable legacy for the forest after the Biennale and the cork and bark pathways will be re-used or recycled."

"The project will be carbon positive, planting sufficient trees after the Biennale to offset its carbon footprint three times over."

With Forest for Change, Es Devlin shows how the forest will be transformative for changing human's behavior. For instance, as stated in a project description, Es Devlin was told that trees had been forbidden from the courtyard at Somerset House when the building was originally conceived 250 years ago. 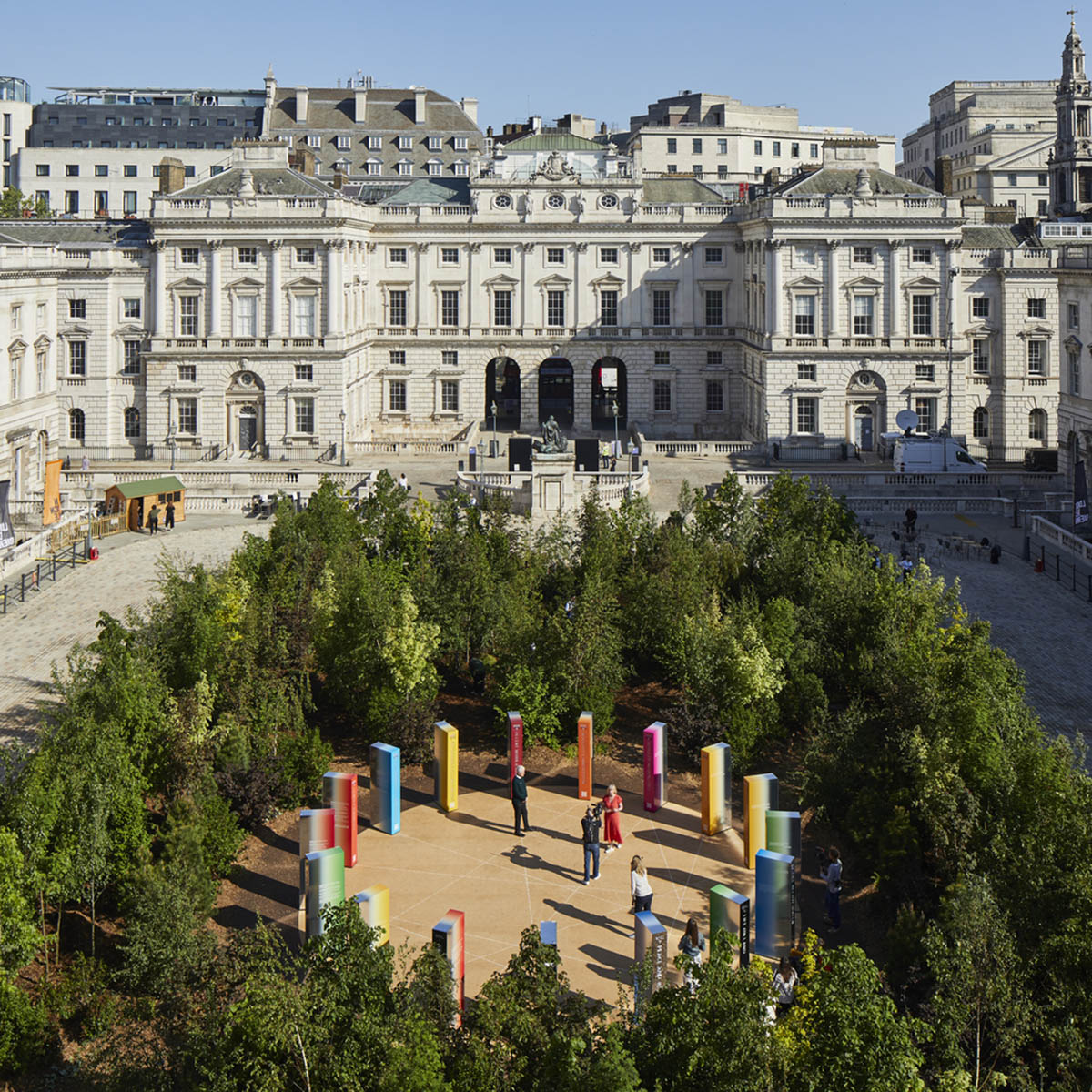 For this reason, Devlin decided to "counter this attitude of human dominance over nature, by allowing a forest to overtake the entire courtyard."

Then the curator and her team considered the "transformational nature of forests in literature to create a place of real change".

"The UN Global Goals offer us clear ways to engage and alter our behaviour and it is our hope that an interaction with the Goals in the forest will be transformative," added Es Devlin. 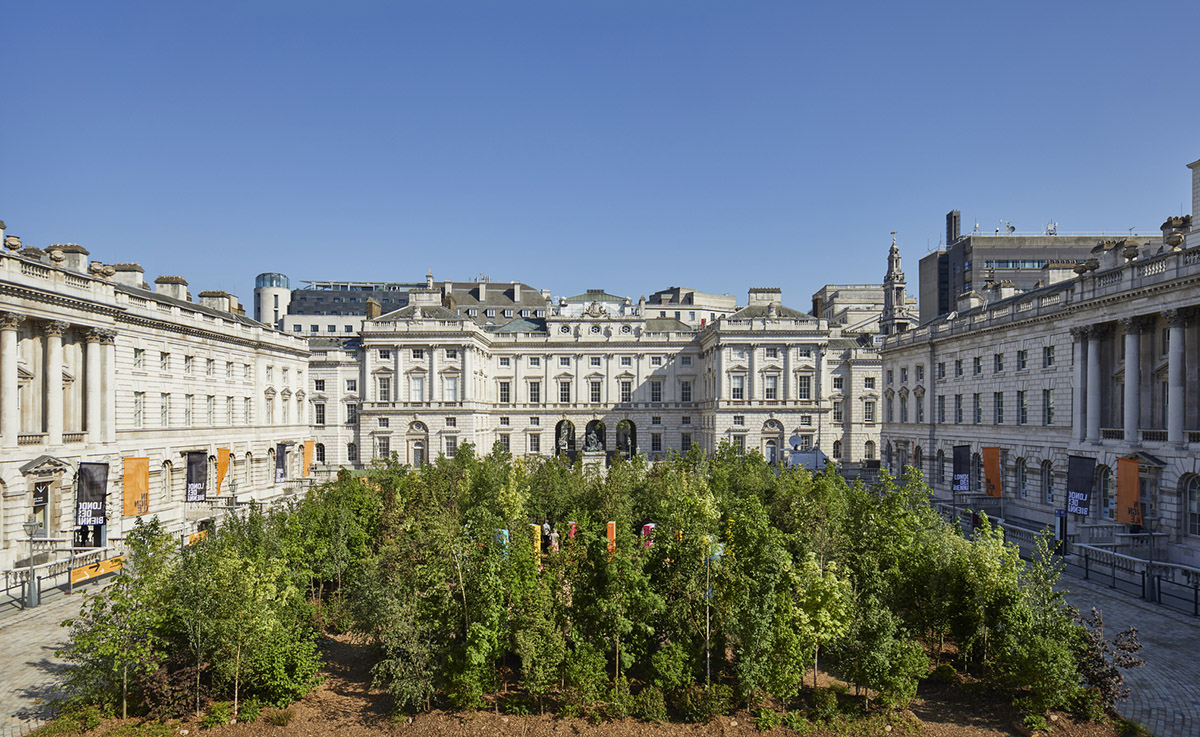 As London Design Biennale emphasizes, "bringing trees into the courtyard at Somerset House for the first time is a bold statement that mirrors the audacious nature of the Global Goals – an ambitious plan agreed to by all nations to create a better and fairer world for all by 2030."

"2021 is a pivotal year for the global community to address the most urgent issues faced in a generation, and this forest of 400 trees will show how the Goals are the answer to the challenges we are facing. It will bring to life the solutions needed to tackle climate change, growing inequality and Covid-19 recovery and show a pathway towards building a better and brighter future for everyone, everywhere."

In the pavilion, the final seventeenth pillar is an interactive piece, visitors are invited to scan a QR code, that asks them to choose the Goal they feel most passionate about and to record a short message expressing the change they wish to see in the world.

The Forest for Change project is presented in partnership with Project Everyone, a not-for profit agency founded by Richard Curtis, Kate Garvey and Gail Gallie to further awareness and engagement with Global Goals.

London Design Biennale is being held between 1 - 27 June at Somerset House in London.