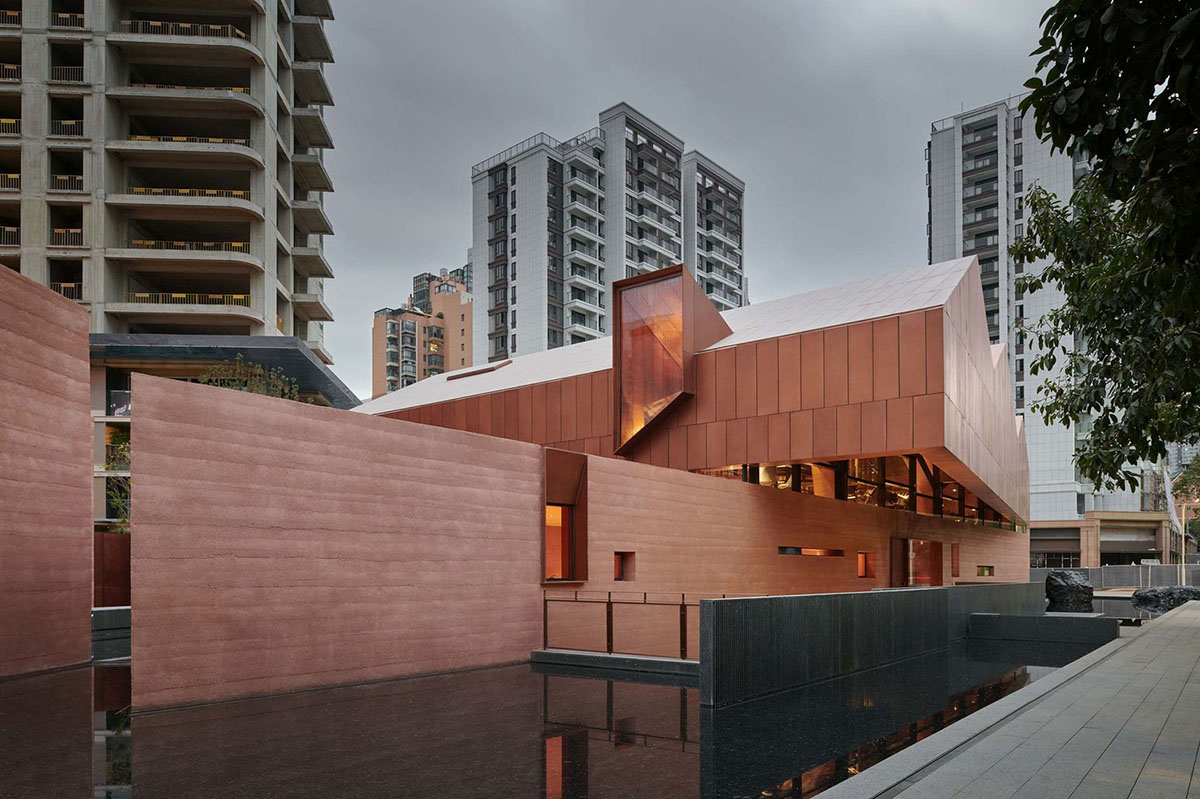 Named Fuzhou Teahouse, the 500-square-metre building is inspired by the nearby Jinshan Temple in Fuzhou, the building is a rare example of a temple structure built in the middle of a river in China and it has become a lasting image unmistakably identified with the city of Fuzhou. 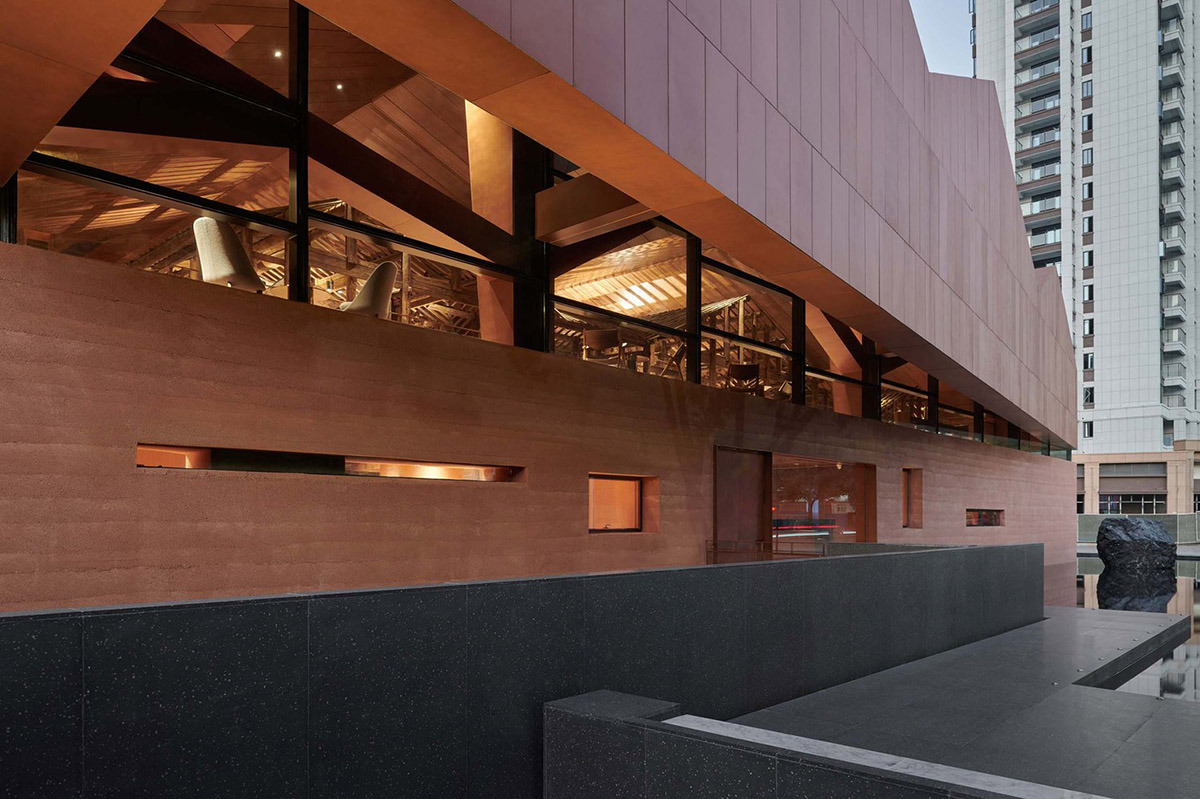 The language of the structure takes cues from the historical roots of the city of Fuzhou and introduces itself as a "relic shelter" that "internalizes a piece of distinct heritage at a time when rapid new development has eroded traditional culture and identity."

As Neri&Hu explains, the client commissioned the studio to design an enclosure for a Chinese artifact – the wooden structure of a high-ranking Qing dynasty official’s residence, replete with ornamental carvings and intricate joinery. 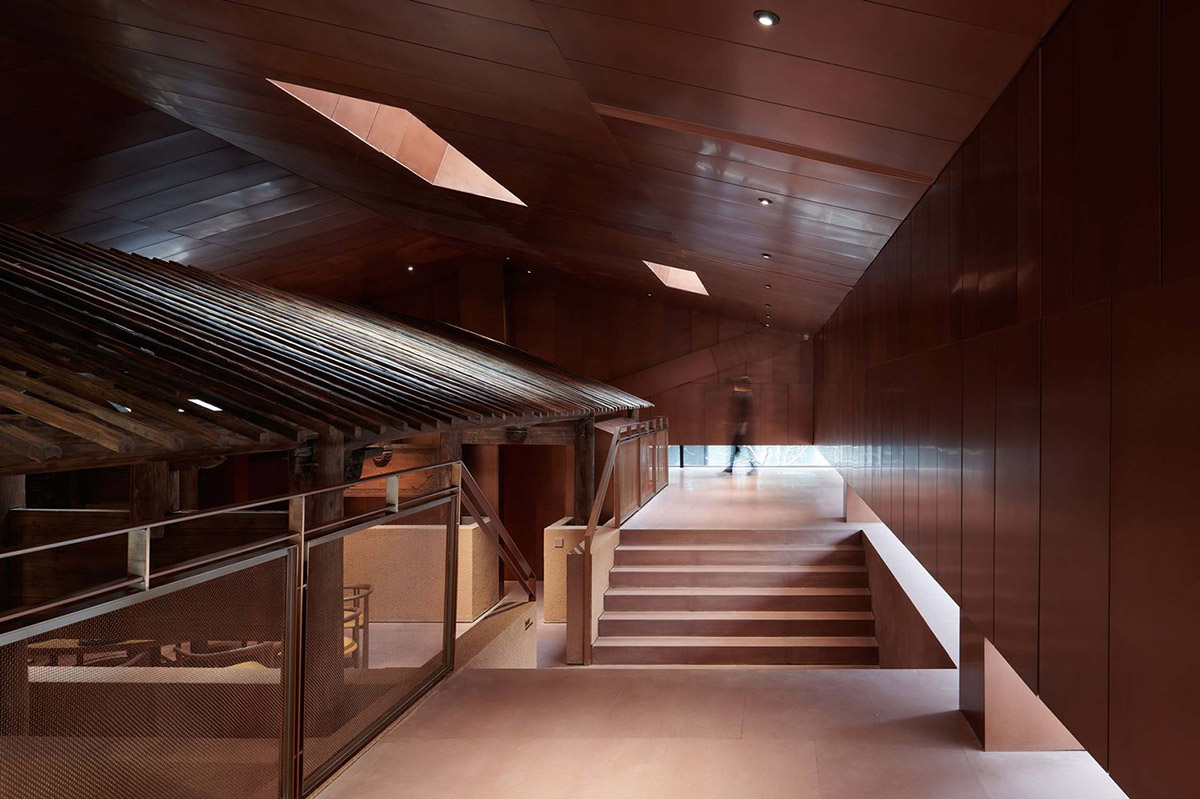 Relocated from Anhui to its new home in Fuzhou, the Hui-style structure is enshrined as the inhabitable centrepiece of a new teahouse.

Envisioned as a house atop a rock, the studio elevated the teahouse above a rammed concrete base. The building has a sweeping copper roof that echoes the roofline of the enclosed architectural relic. 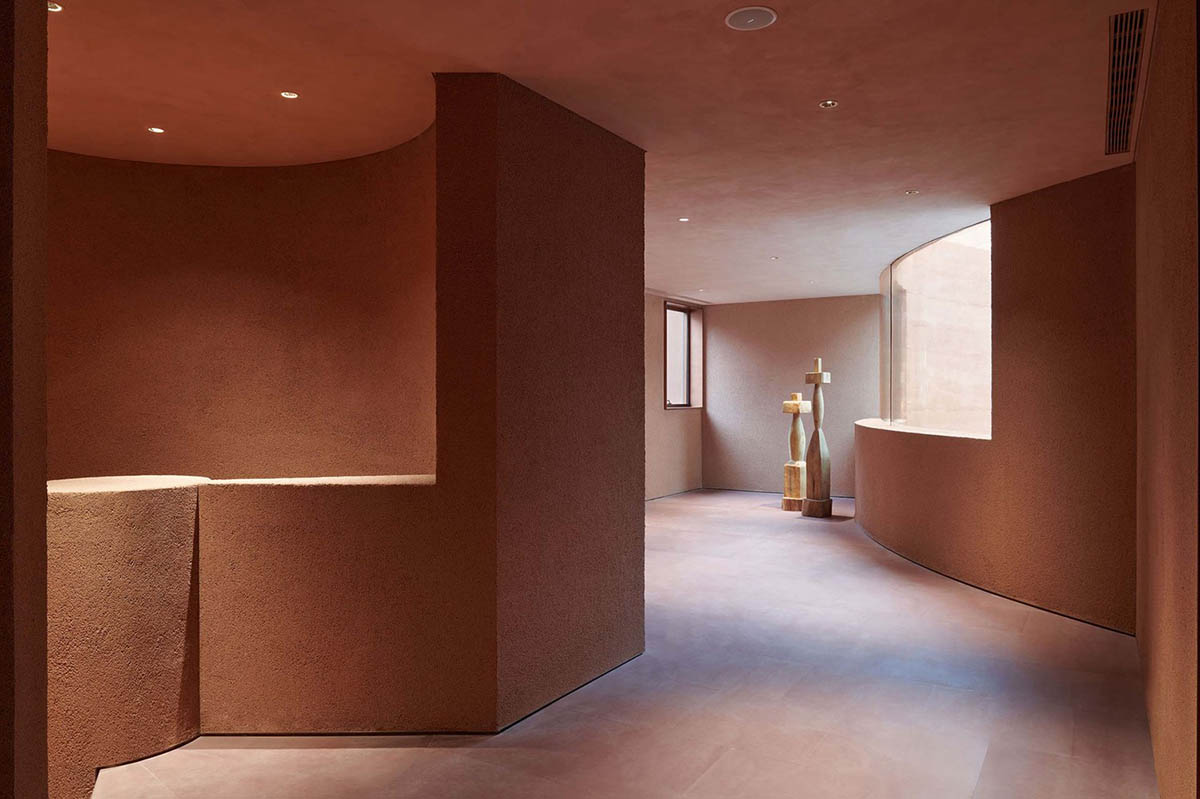 The building's core material is made of rammed concrete, as the studio highlights, this material is a modern homage to the traditional earthen dwellings of the region, emphasizing a raw monumentality. 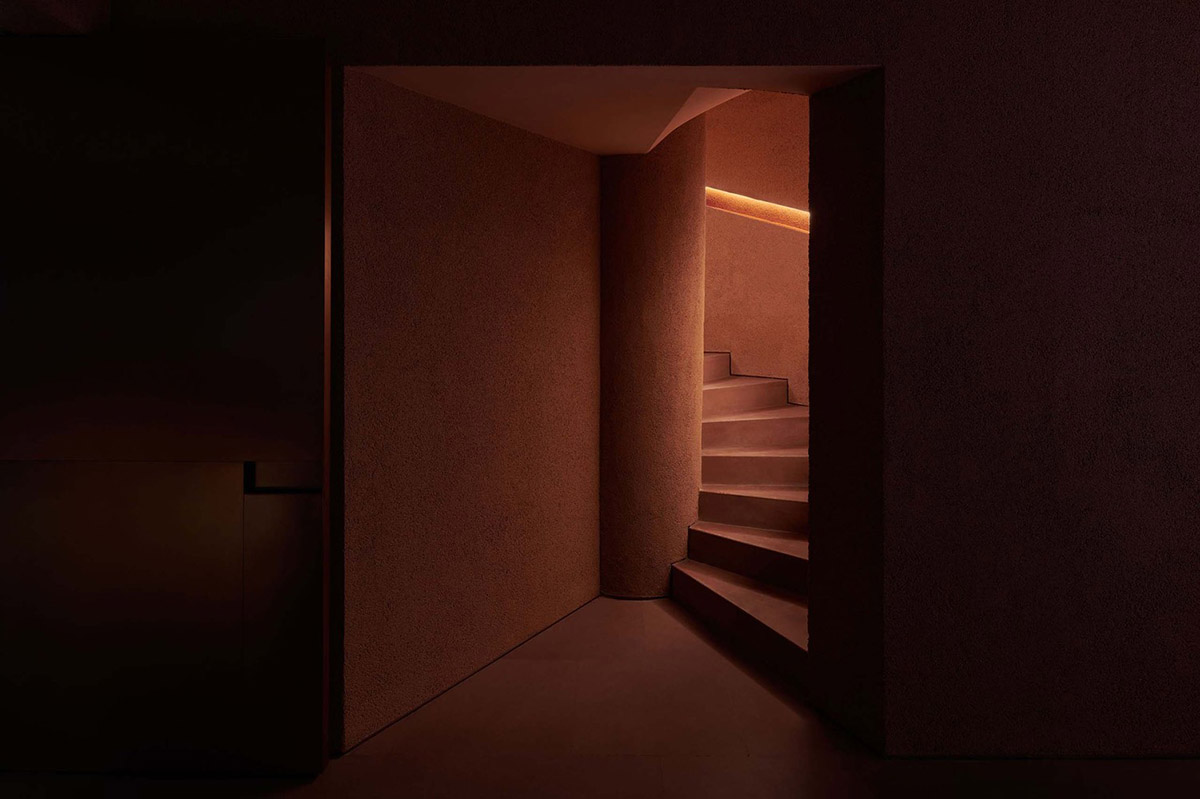 "Visitors are presented with two images of the building upon approach: the upright silhouette of the form, and its mirrored reflection duplicated in the surrounding pool of water," said Neri&Hu. 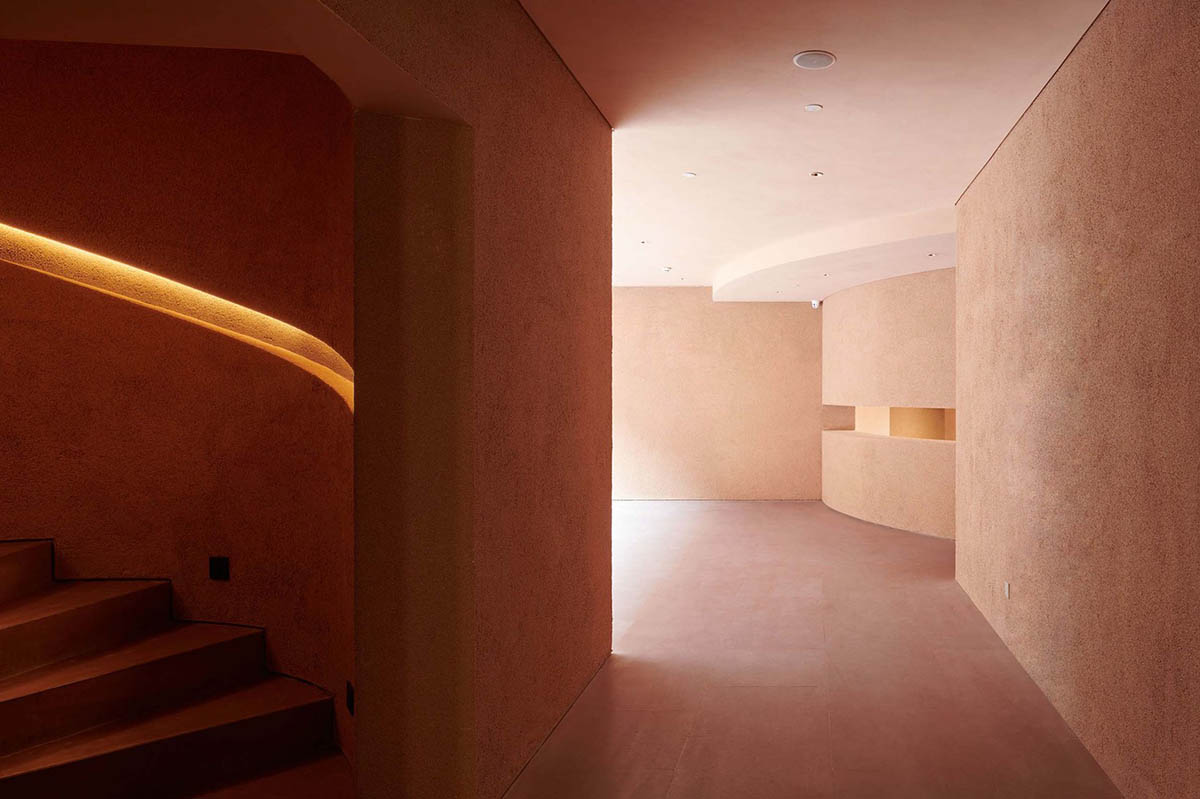 Inside, there are a series of contrasts that play out among elements which they are partly bright and dark, light and heavy, coarse and refined. Visitors enter the grand hall where the structure of the ancient residence is situated.

The architects designed sky wells that penetrate the roof, bringing natural light into the depths of the enclosure and illuminating the priceless artifact on display. 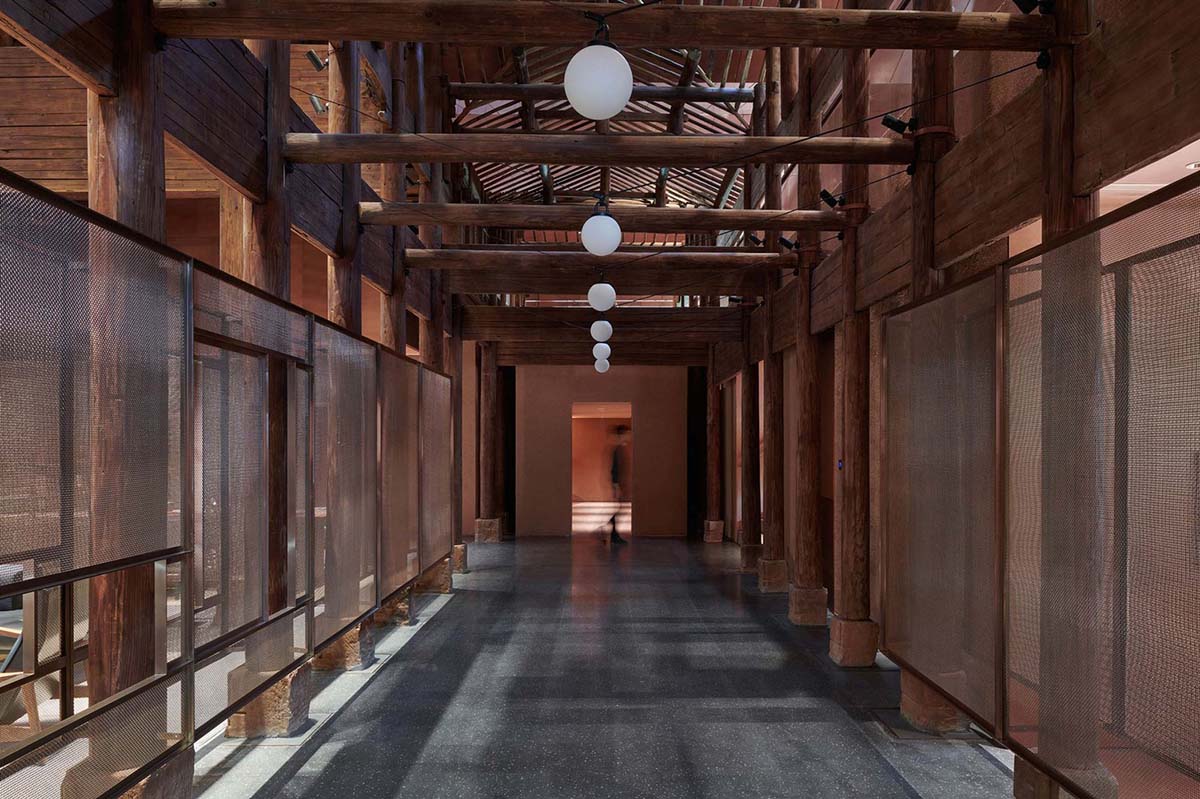 Once visitors reach the mezzanine floor, the structural configuration of the building begins to reveal itself.

The studio lifted the hovering metal roof 50 cm off the solid base by copper-clad trusses to introduce a sliver of continuous illumination around its periphery.

The architects wrapped the teahouse around the historical wooden structure, the mezzanine space allows visitors to appreciate intricate carpentry details at eye level. 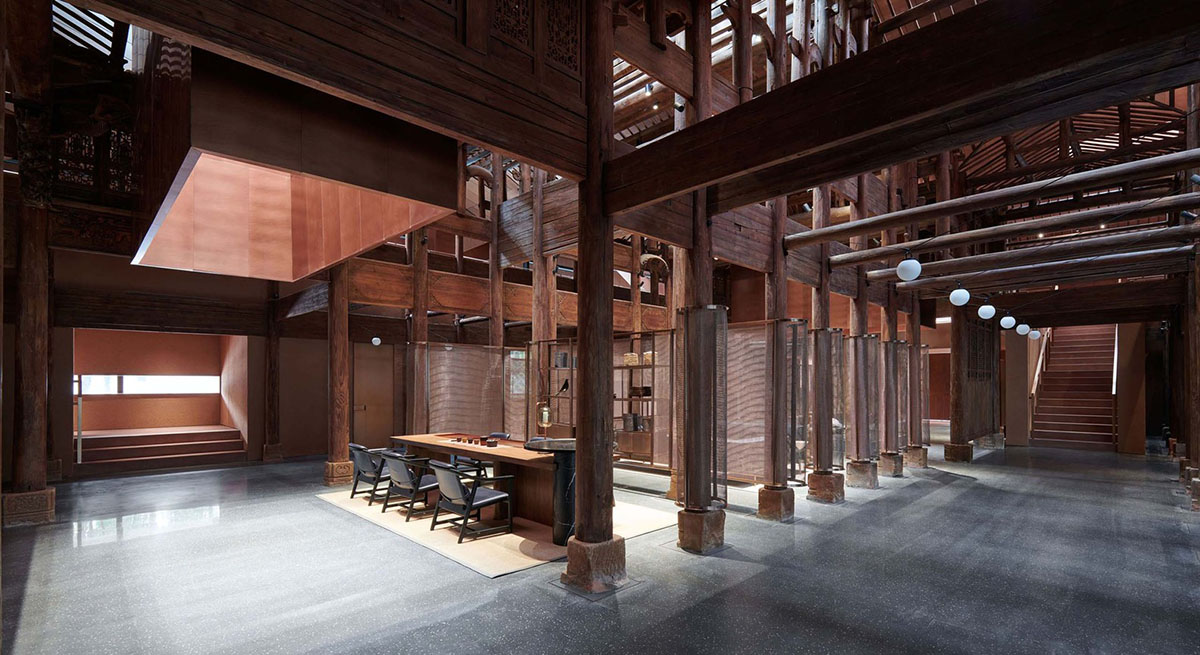 The basement level includes a secondary arrival lobby housing a rotunda, a sunken courtyard, and tasting rooms. At the top of the rotunda, a carved oculus capped by the glass is submerged beneath the pool in the courtyard above. It filters the sun through a thin film of water, creating a mesmerizing play of reflections. 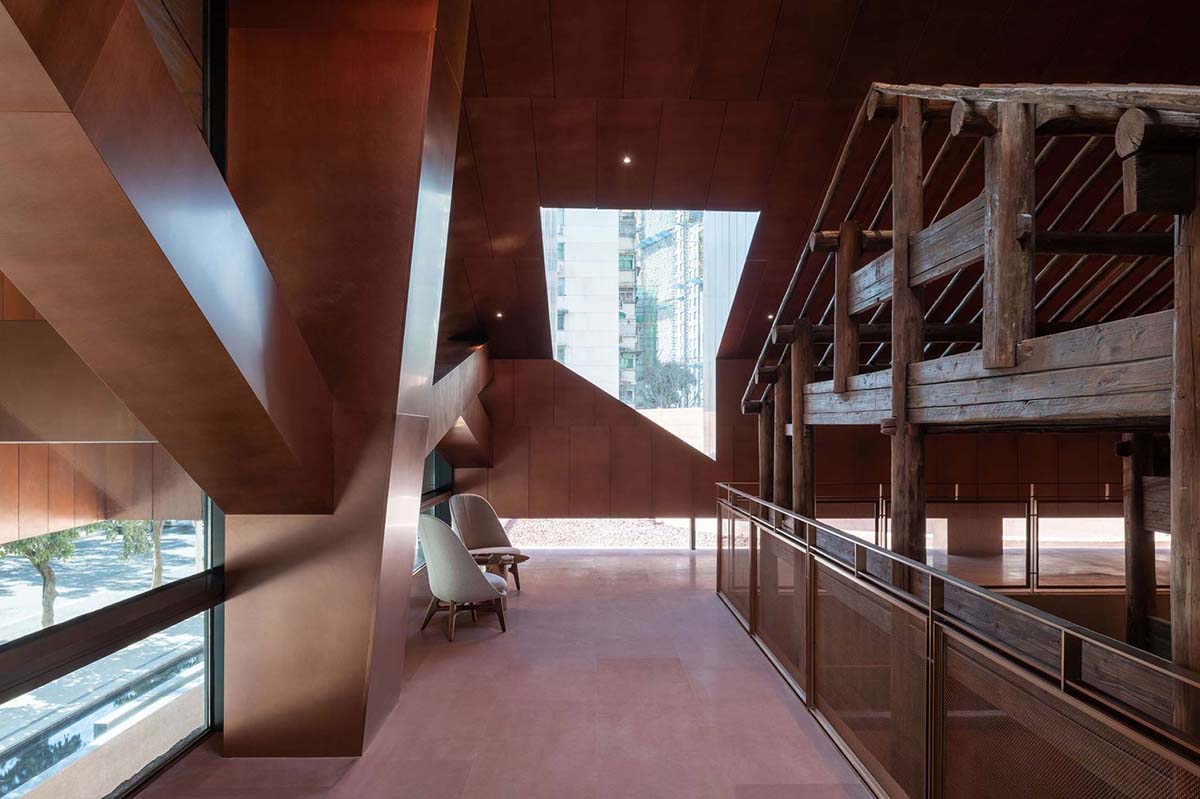 The structure offers so many surprising details and spaces as long as visitors walk inside. It acts like a pathway of a new discovery that blends between modern and history. 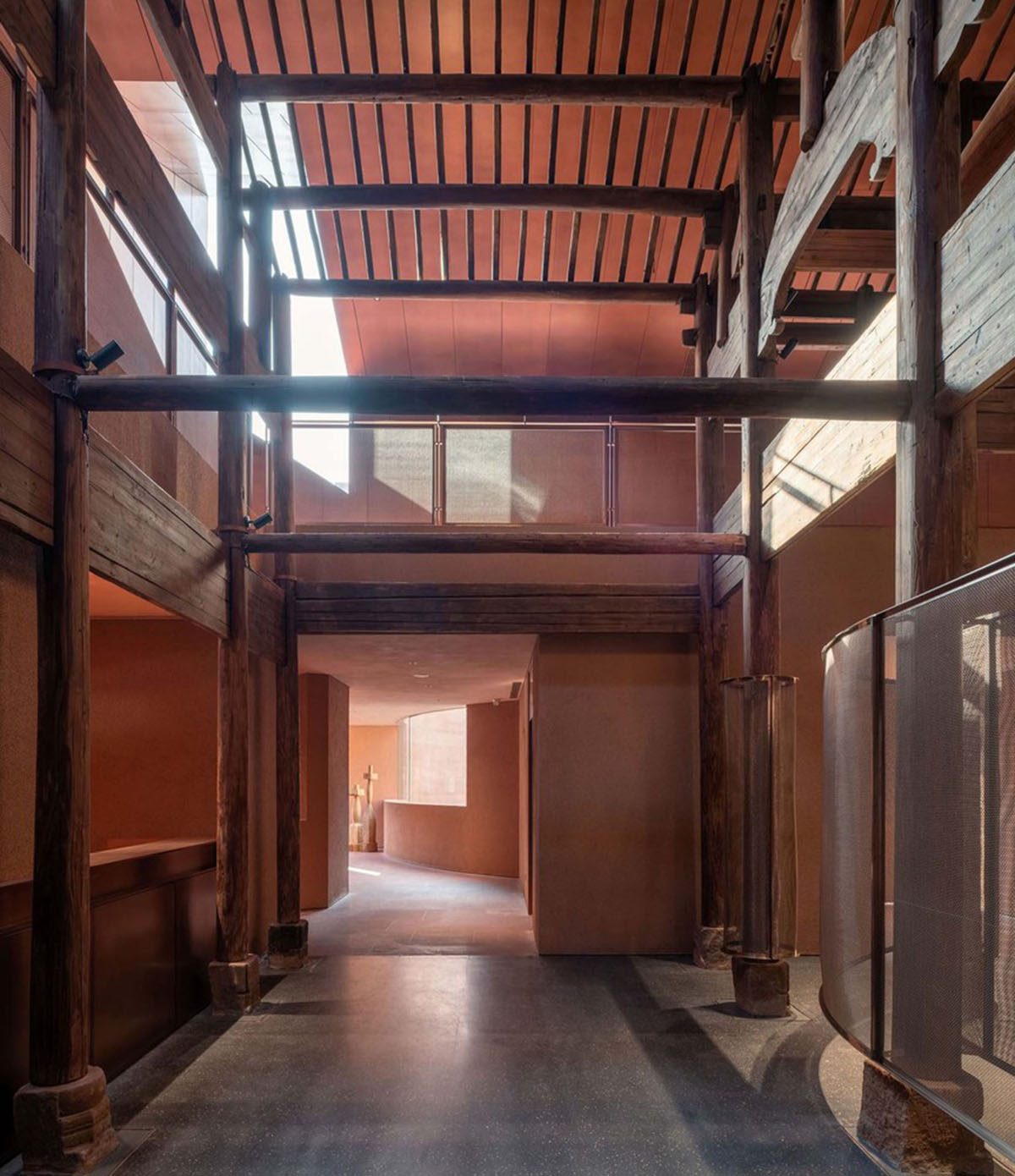 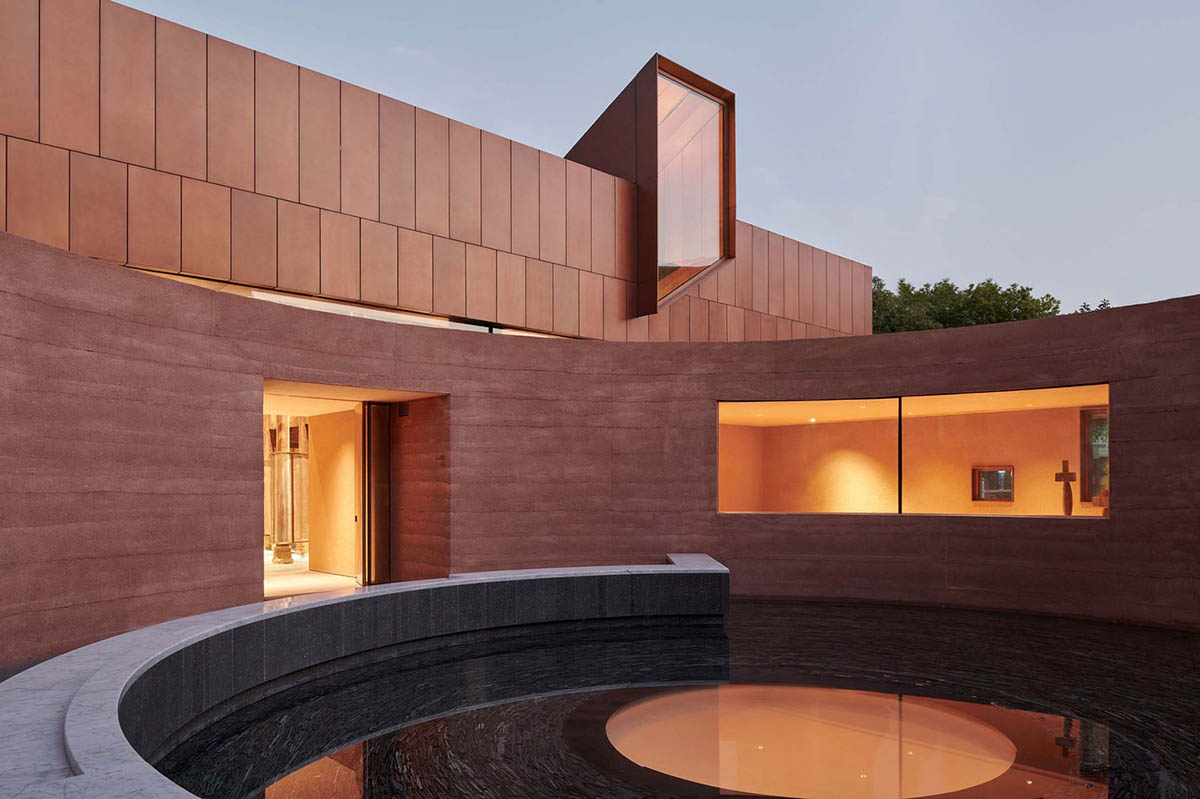 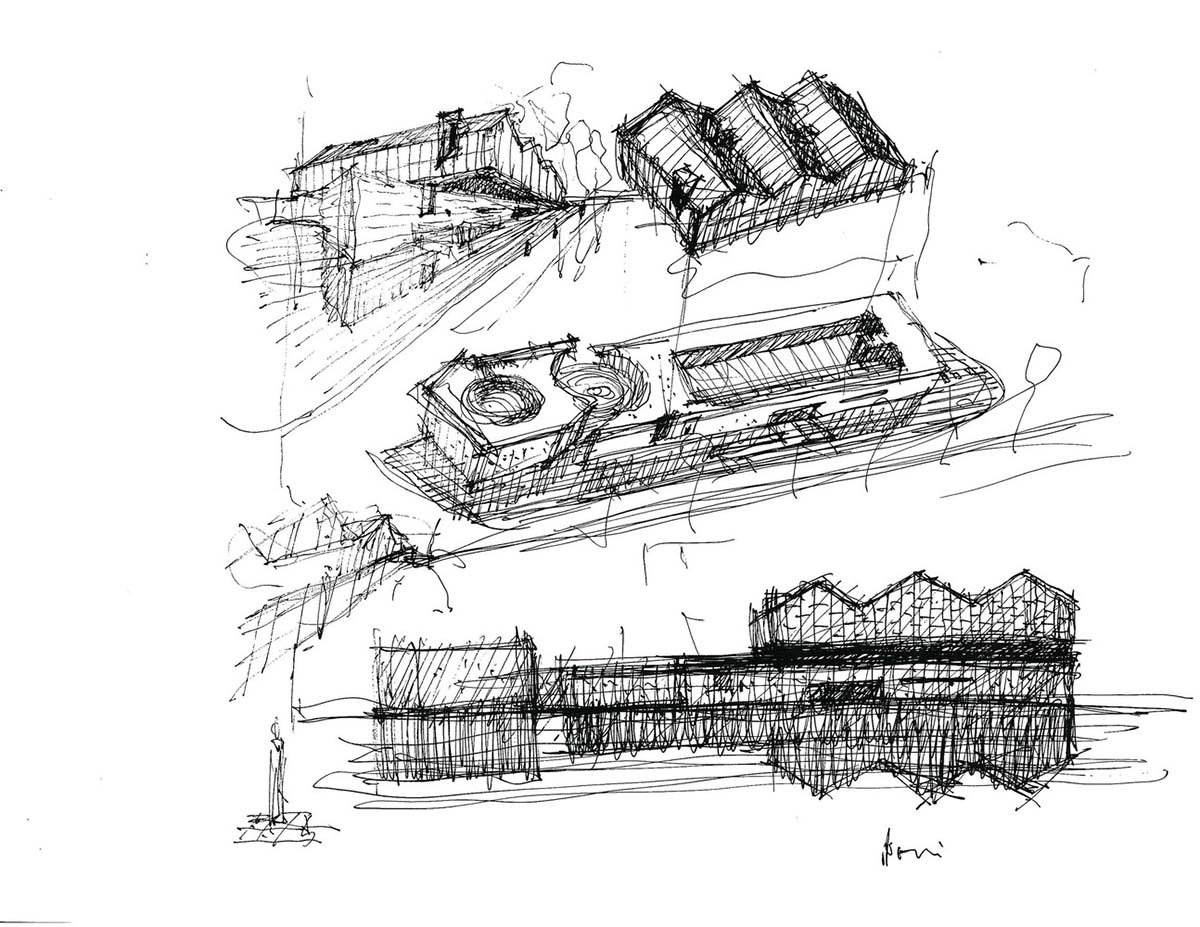 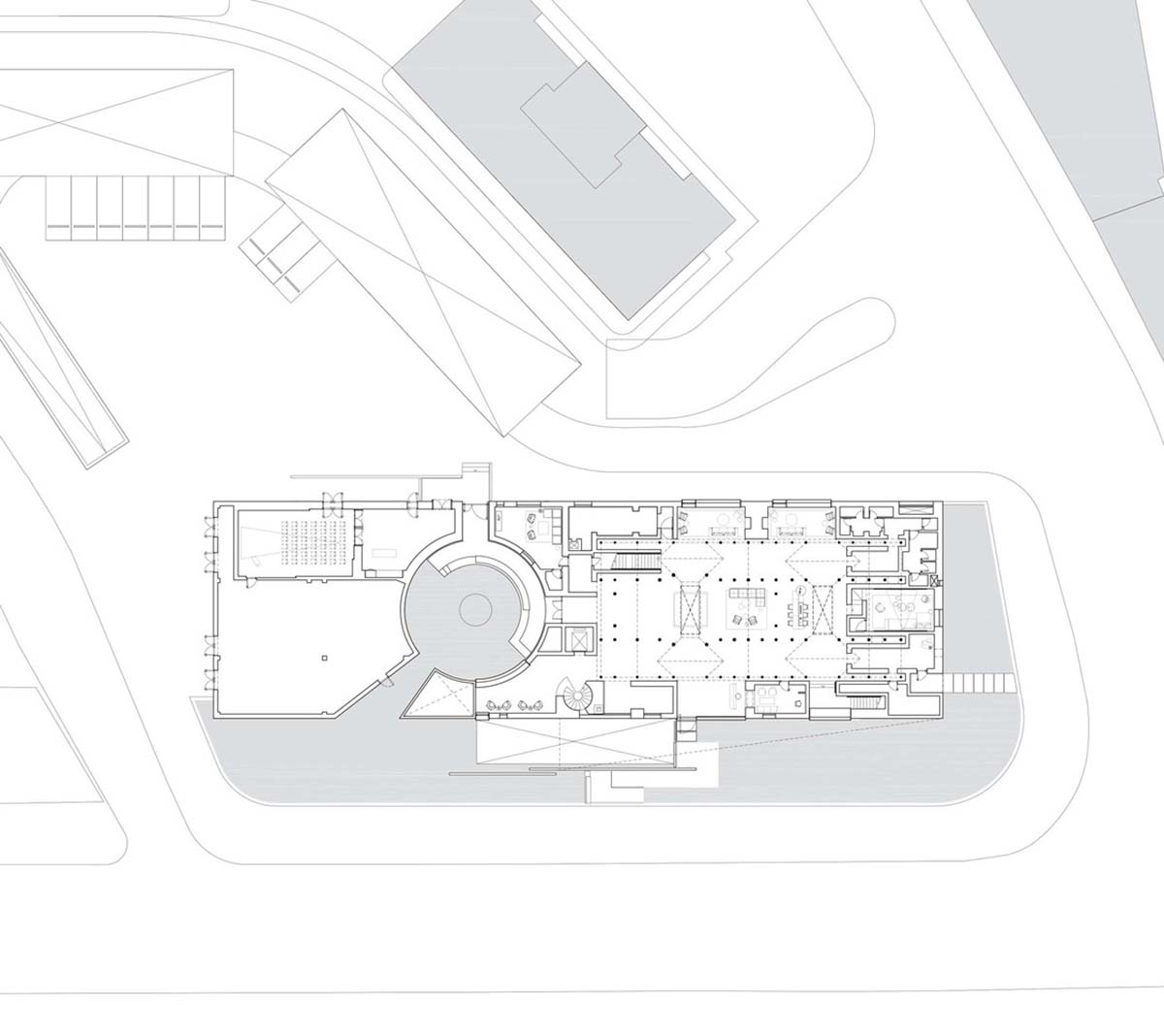 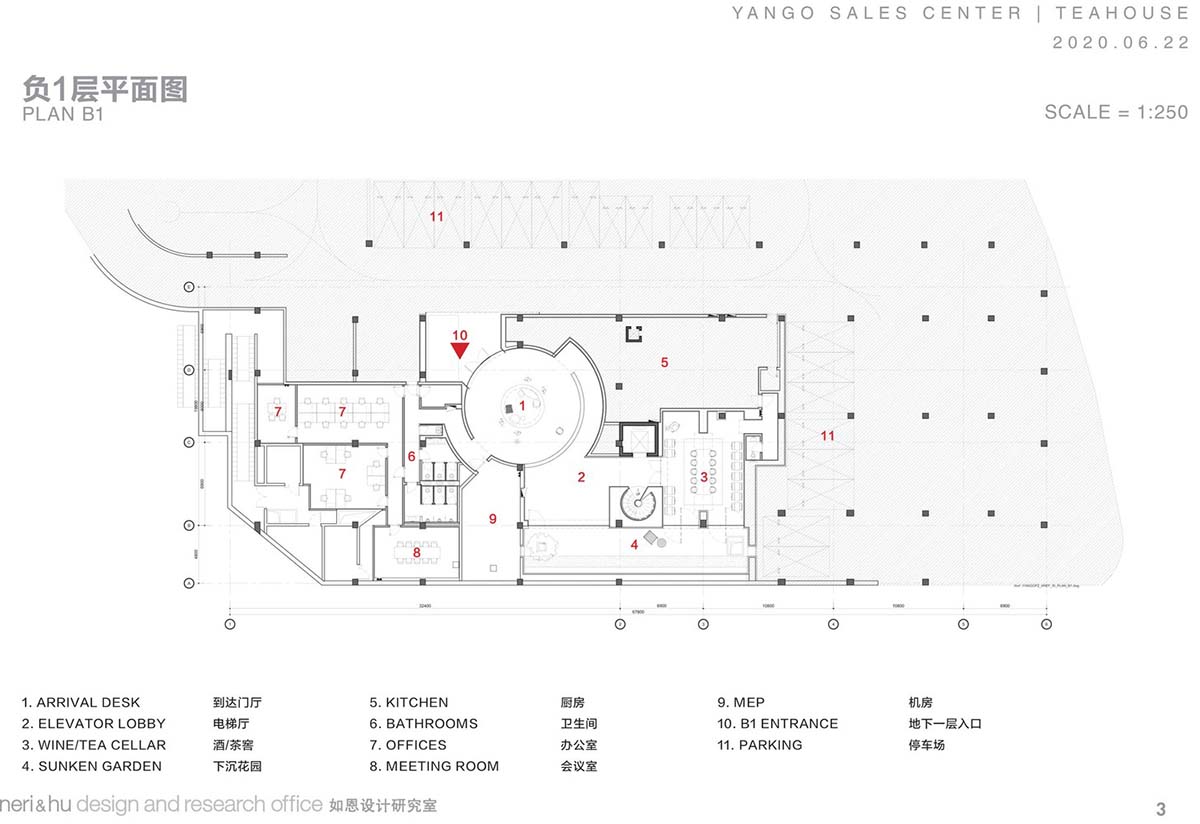 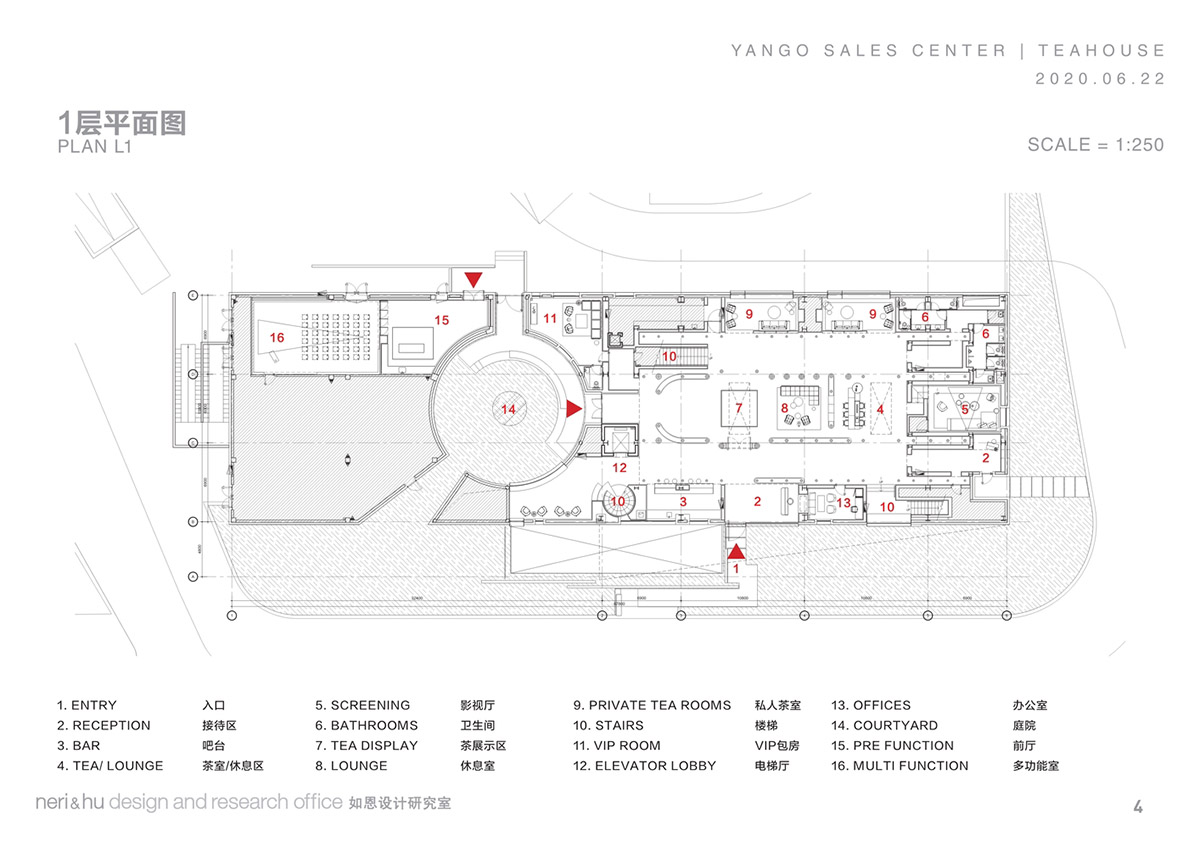 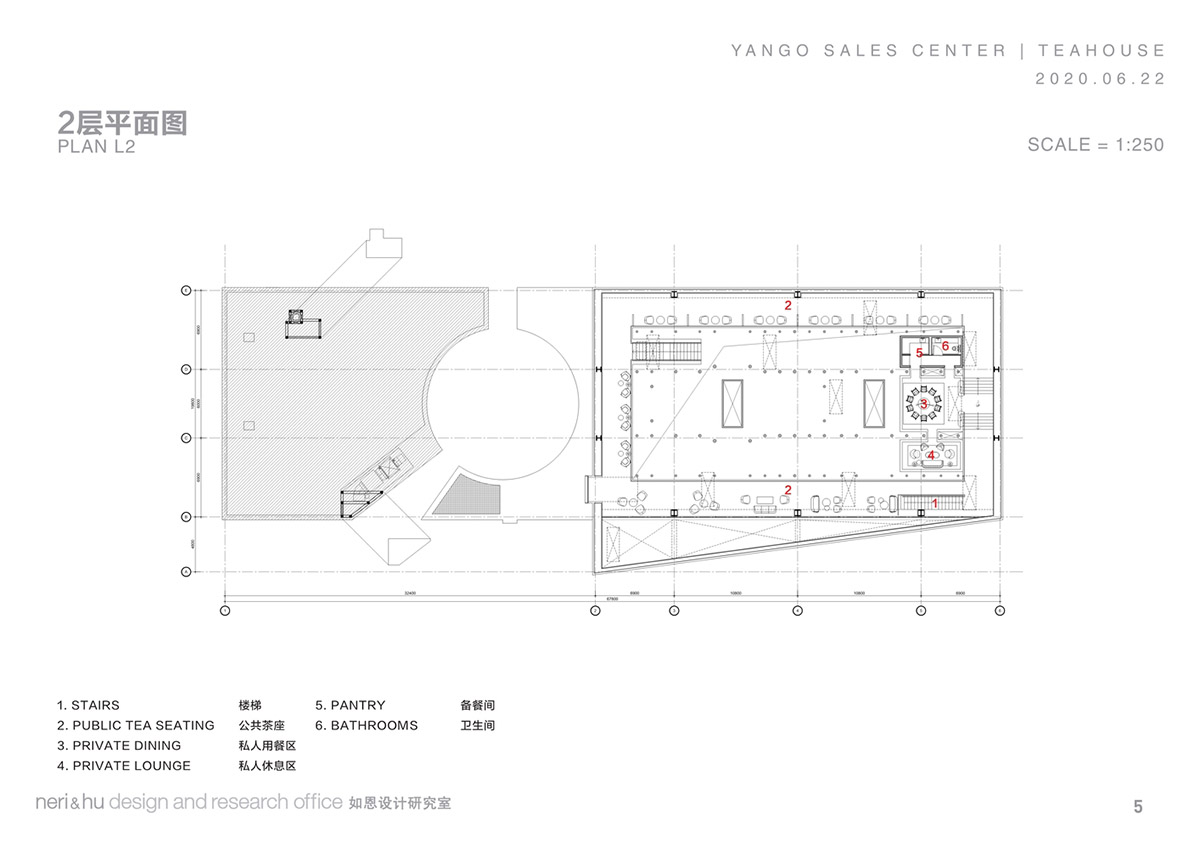 Neri&Hu was founded by partners Lyndon Neri and Rossana Hu in 2004. The firm is one of the leading Chinese architecture firms, the studio's portfolio expands from master planning and architecture, to interior design, installation, furniture, product, branding and graphic works.

Neri&Hu recently completed a restaurant in Paris and transformed ex-industrial building into it's own Shanghai office.