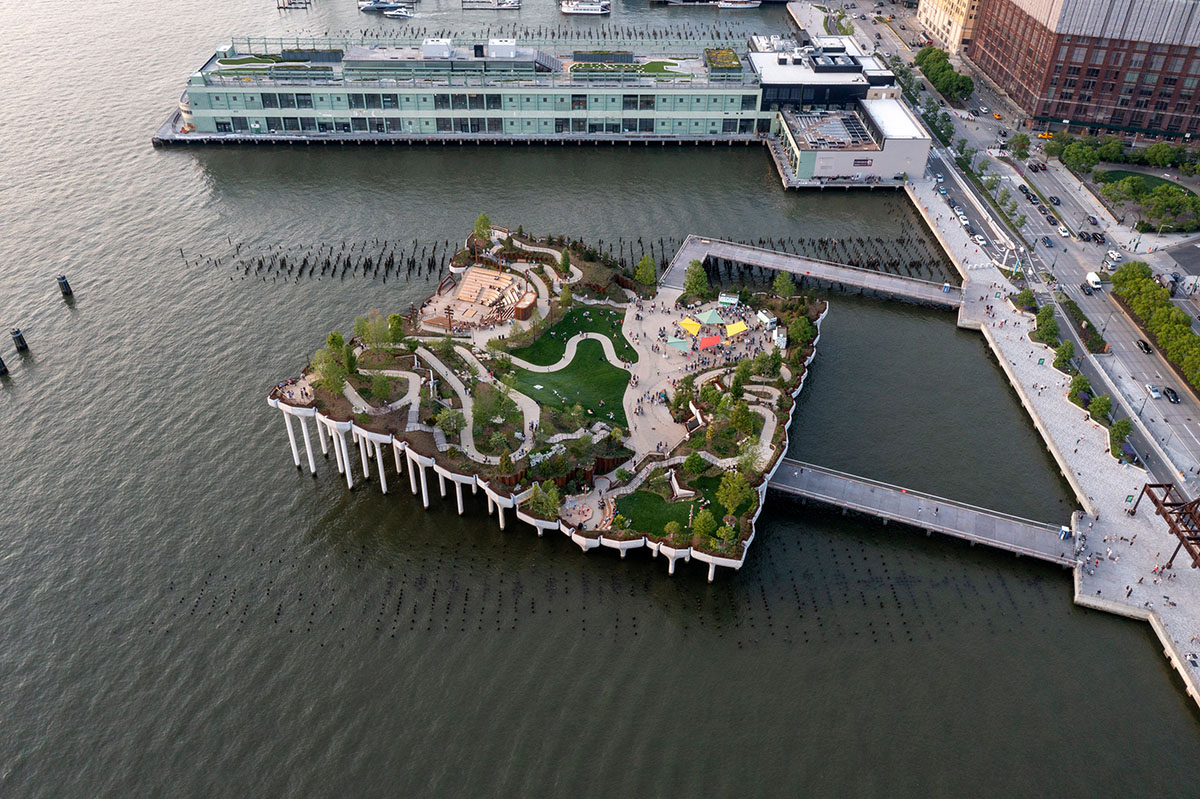 Designed by Heatherwick Studio, 'Little island,' a park and performance venue supported by 132 concrete 'tulip' columns set into the Hudson River in New York City, opened to the public on May 21, 2021, nearly seven years after plans were unveiled.

'Little Island,' as a new icon in the city, is a free public park that extends outward into the Hudson River from 13th street, introducing a sculptural and monumental green space. The Island was built on the pillars of the former Pier 54, connected to Manhattan by a walkway that will take visitors from the trendy Meatpacking District.

Little Island is its name, but the vision and the budget behind it were colossal. It took eight years for Heatherwick to realize the project. Called initially ‘Pier 55’, the designers first announced the project in 2014. Construction started in 2016, but the island dream overcame political and real estate issues involving the Hudson River Park to which it belongs that nearly scuttled it in 2017. The project restarted in 2019. Planned in partnership with the Hudson River Park Trust, Little Island was funded primarily through the Diller-Von Furstenberg Family Foundation and Barry Diller. Their $260 million donations have further transformed the West Side of Manhattan.

Heatherwick Studio built the park with global engineering firm Arup and New York-based landscape architects MNLA. The 2.4-acre Island is located in Chelsea on Manhattan's West Side, close to the southern end of the High Line, and it is connected to the mainland with two bridges. Little Island is formed of mushroom-shaped columns made from concrete at different levels to create an undulating platform. 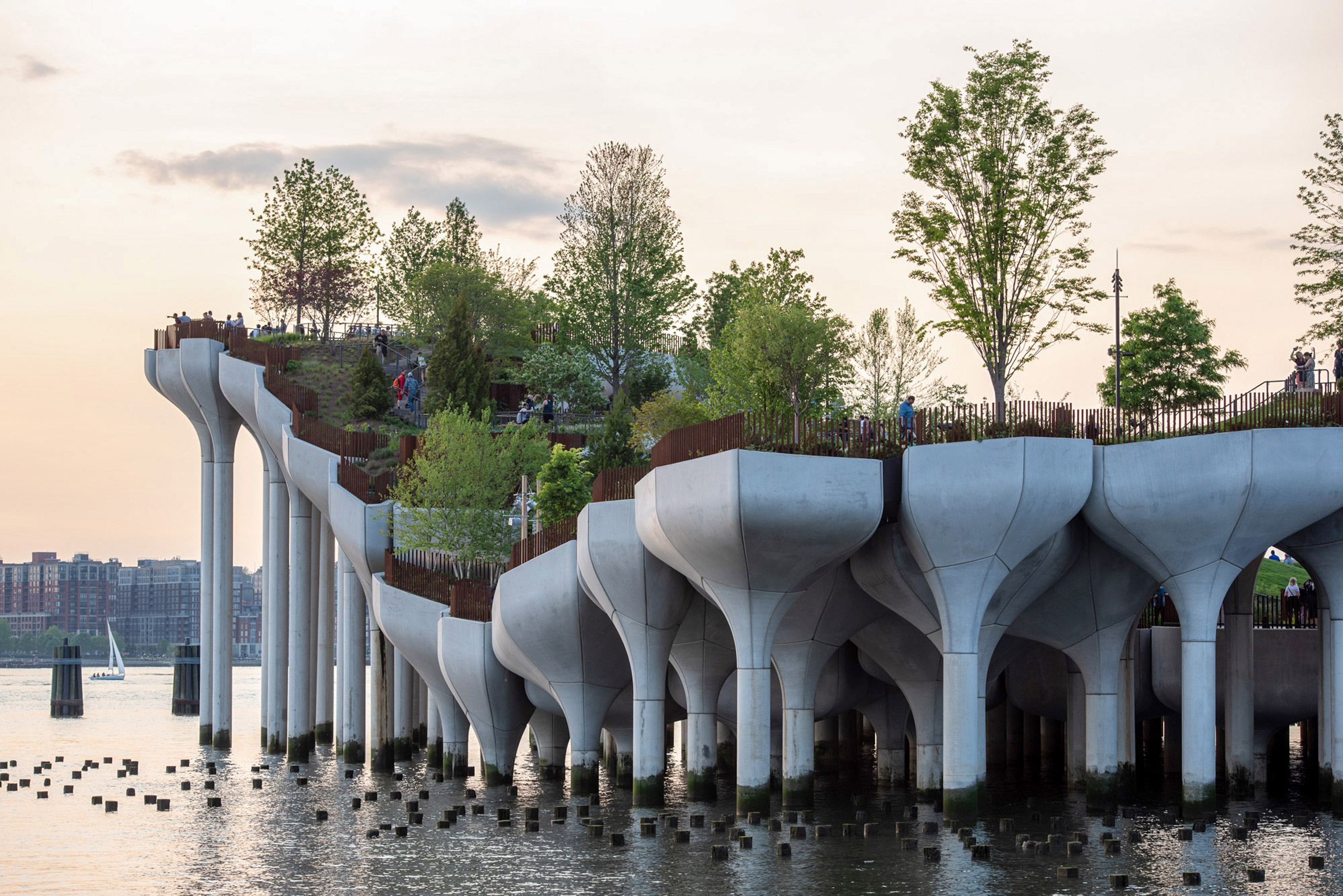 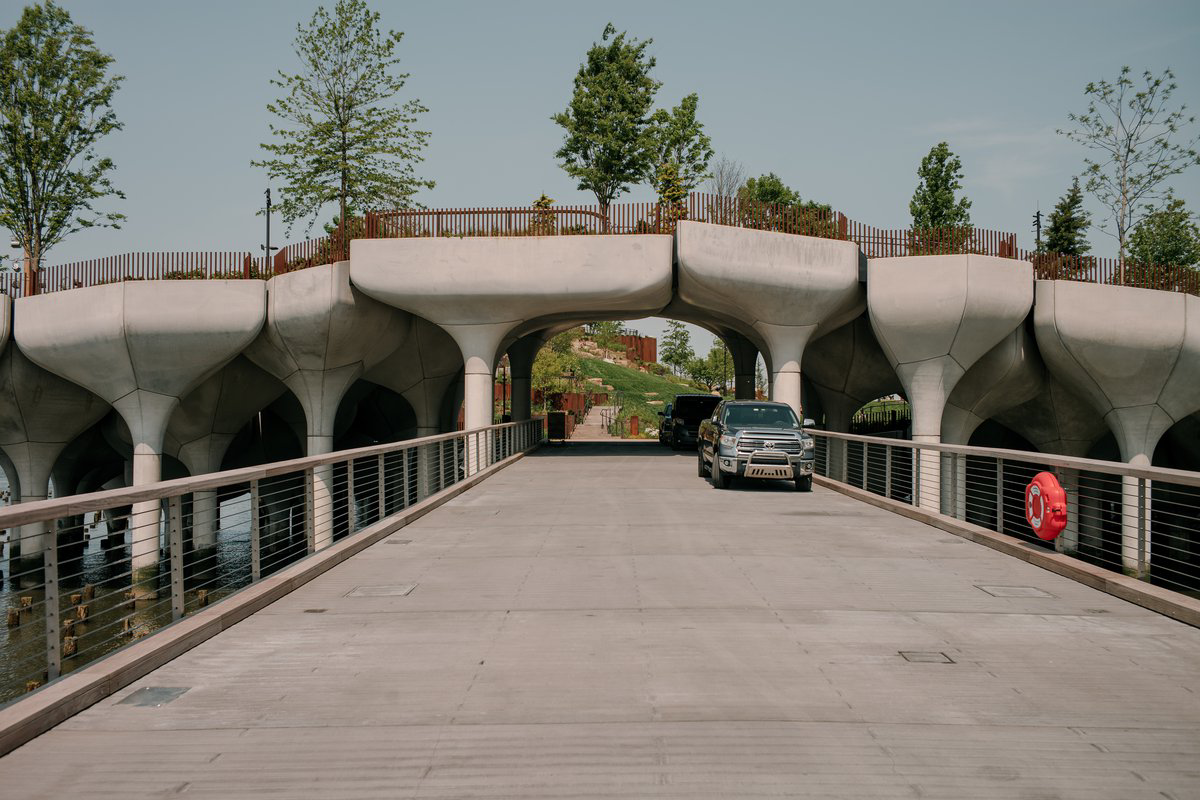 The expressive structure consists of 280 concrete piles, which emerge from in between the leftover wood piles of pier 54 that were mainly preserved to maintain habitats for aquatic life. On top of the piles, 132 concrete 'tulips' make up the structure of the park. Each tulip's shape is unique and has a different weight load capacity to hold the soil, lawns, overlooks, and trees. Little Island's precast concrete elements were fabricated upstate using 39 different formwork shapes and then transported to the site via barge.

According to Heatherwick, the idea for the design came from observing the piles of the old Pier 54 that still poke out of the water and provide a breeding ground for fish. "Typically, piers are composed of structural piles that go down into the river bed with slabs that cover them to make a surface," said Heatherwick. "However, we were inspired by these piles and the civil engineering required to build structures that are able to withstand extreme river conditions." 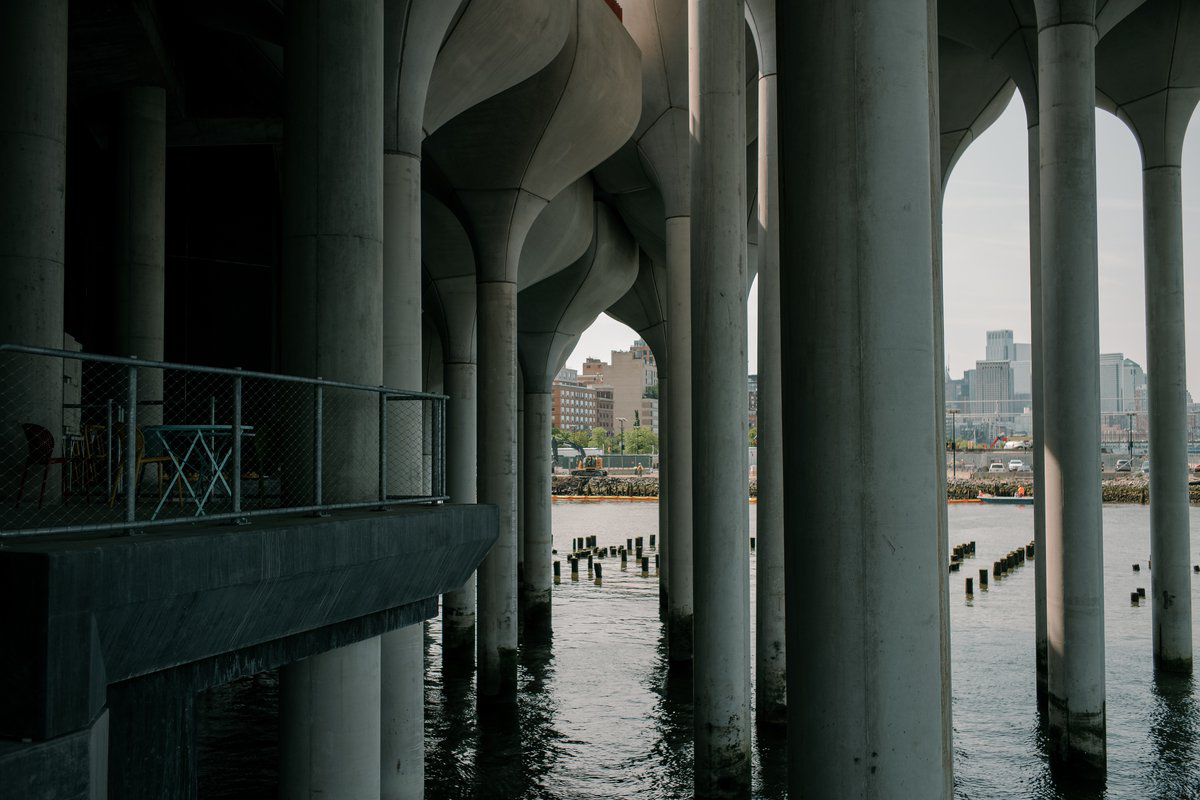 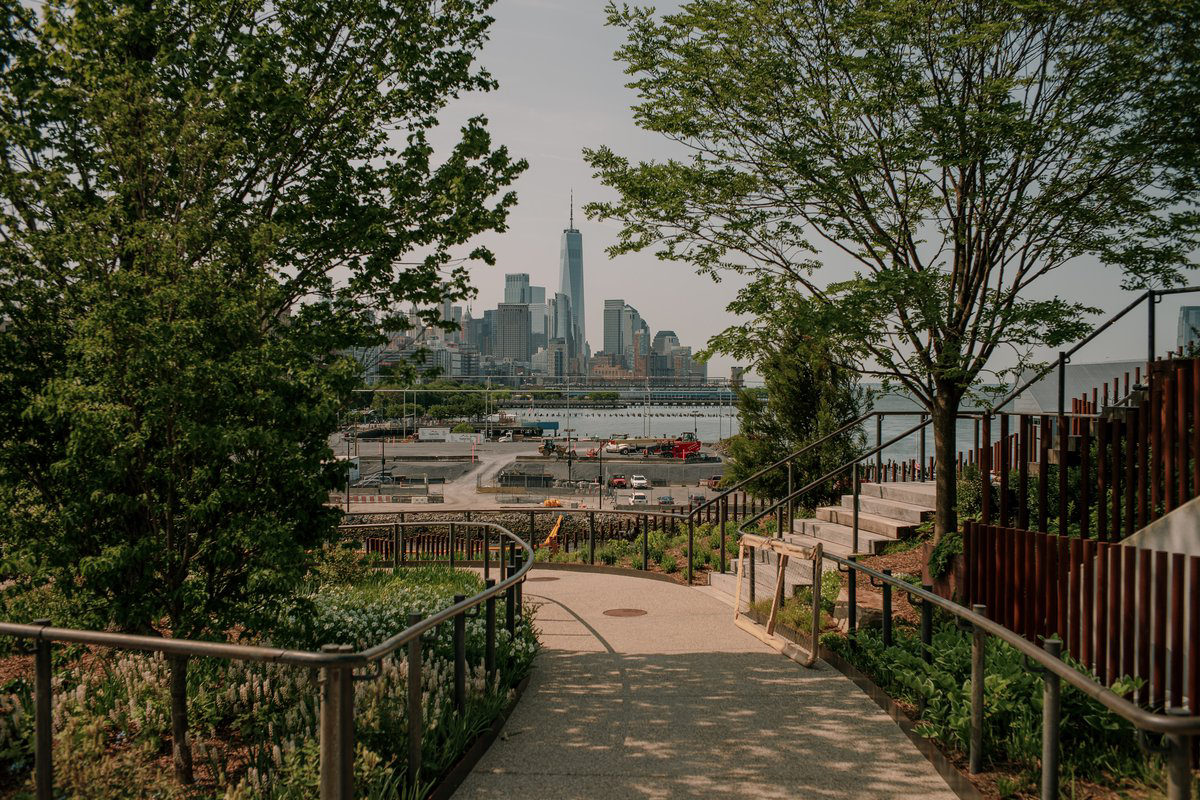 View of One World Trade Center from the Island. Image © Scott Heins

MNLA chose 400 species of plants and 100 types of trees for the project, strategically planting evergreens to stop the wind from the river buffeting people as they stroll through the park. There are lawns for visitors to sunbathe in the summer.

Heatherwick segmented the park into three main areas; a ‘PlayGround’ with snacks and beverages, a nearly 700-seat, thrust-stage theater, and a Glade area for quiet contemplation. Little Island has three performance venues, including the amphitheater, which has wooden benches and a capacity for 700 audience members. There's also a central space that can hold 3,500 people and a more intimate 200-person spoken-word stage. Instead of building additional structures in the park and disrupting the view, all of the backstage facilities for the performance venues are hidden under the pier and accessed via one of the bridges. 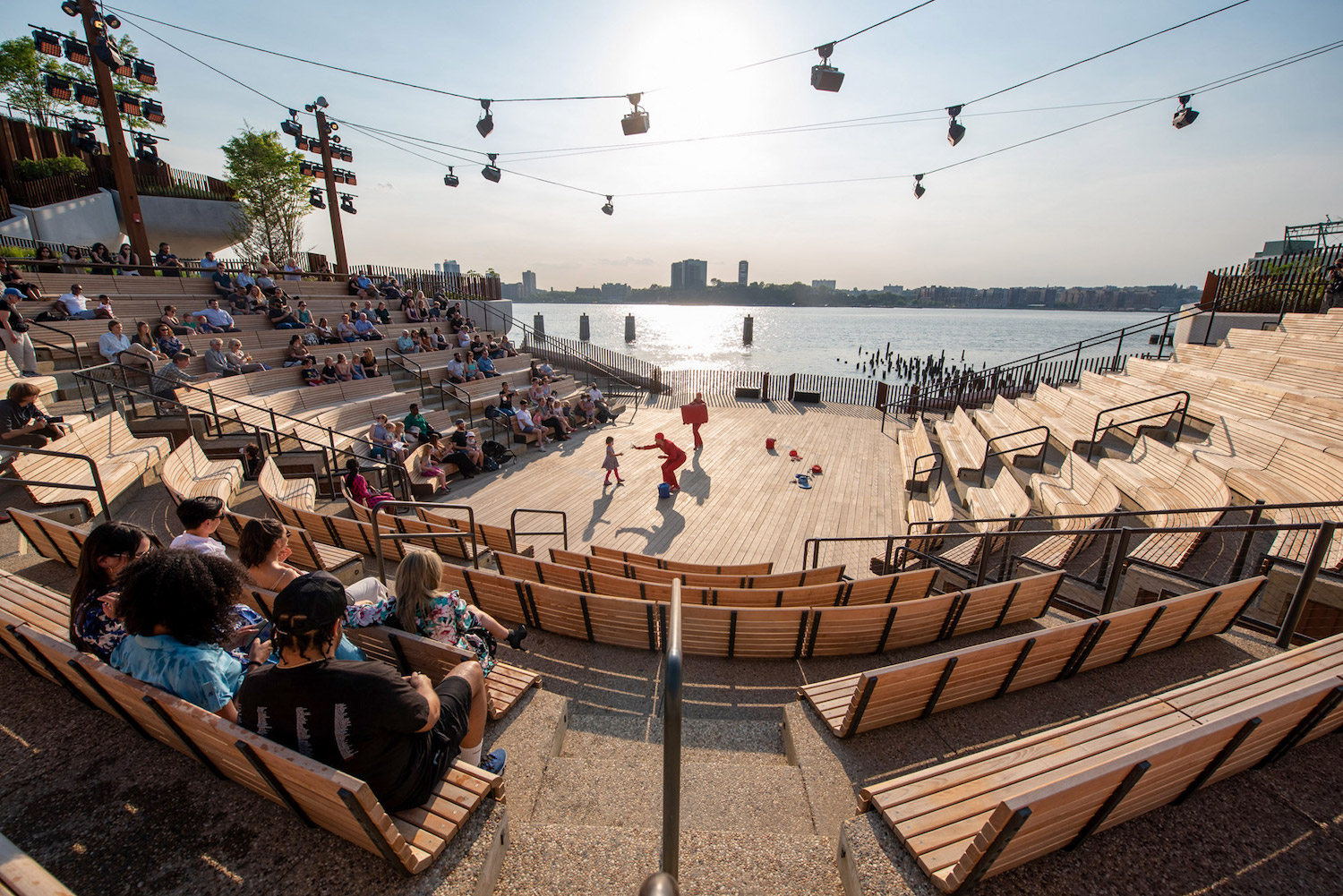 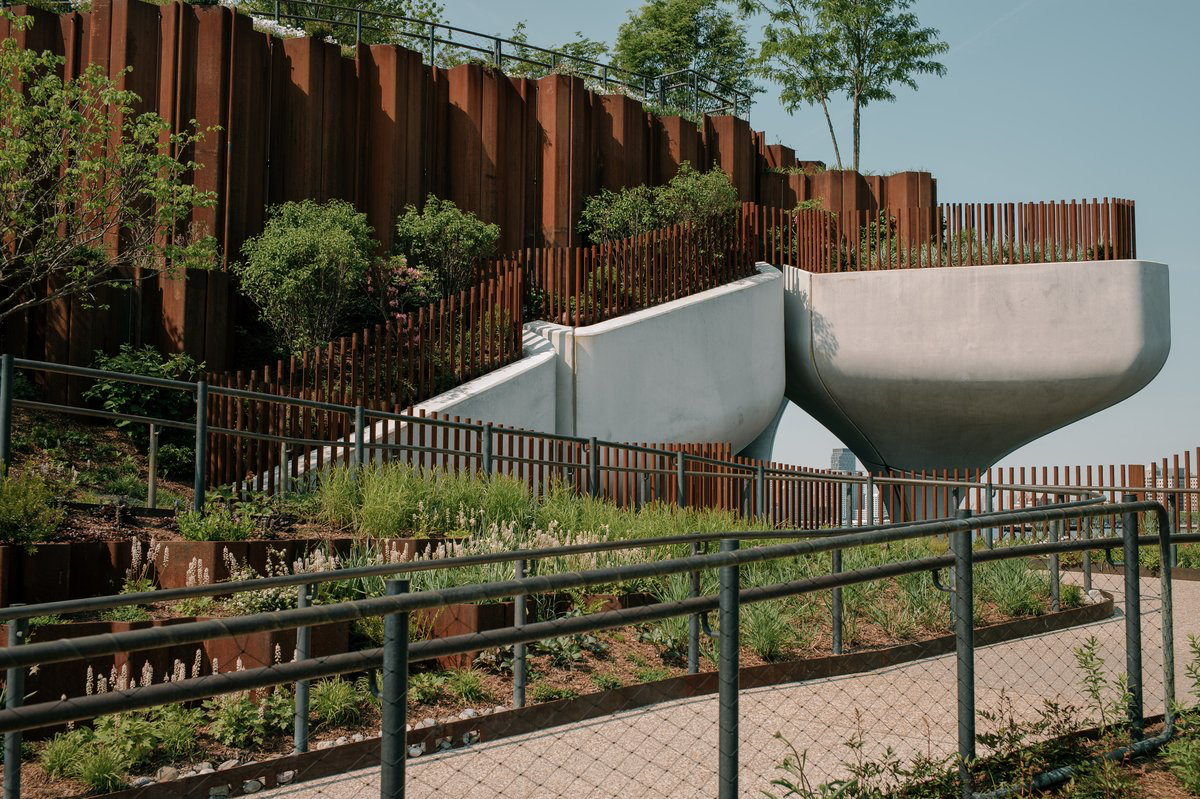 While the $260 million project had a controversial start, it now marks one of the first parks to open in the city since the COVID-19 pandemic. The pier is open daily, with the same operating hours as the rest of Hudson River Park (6:00 AM–1:00 AM). Given COVID and crowding, Little Island offers timed access tickets; new tickets will be available on a rolling basis. Beginning in June, Little Island will host a season of programming to foster and support New York City-based artists. 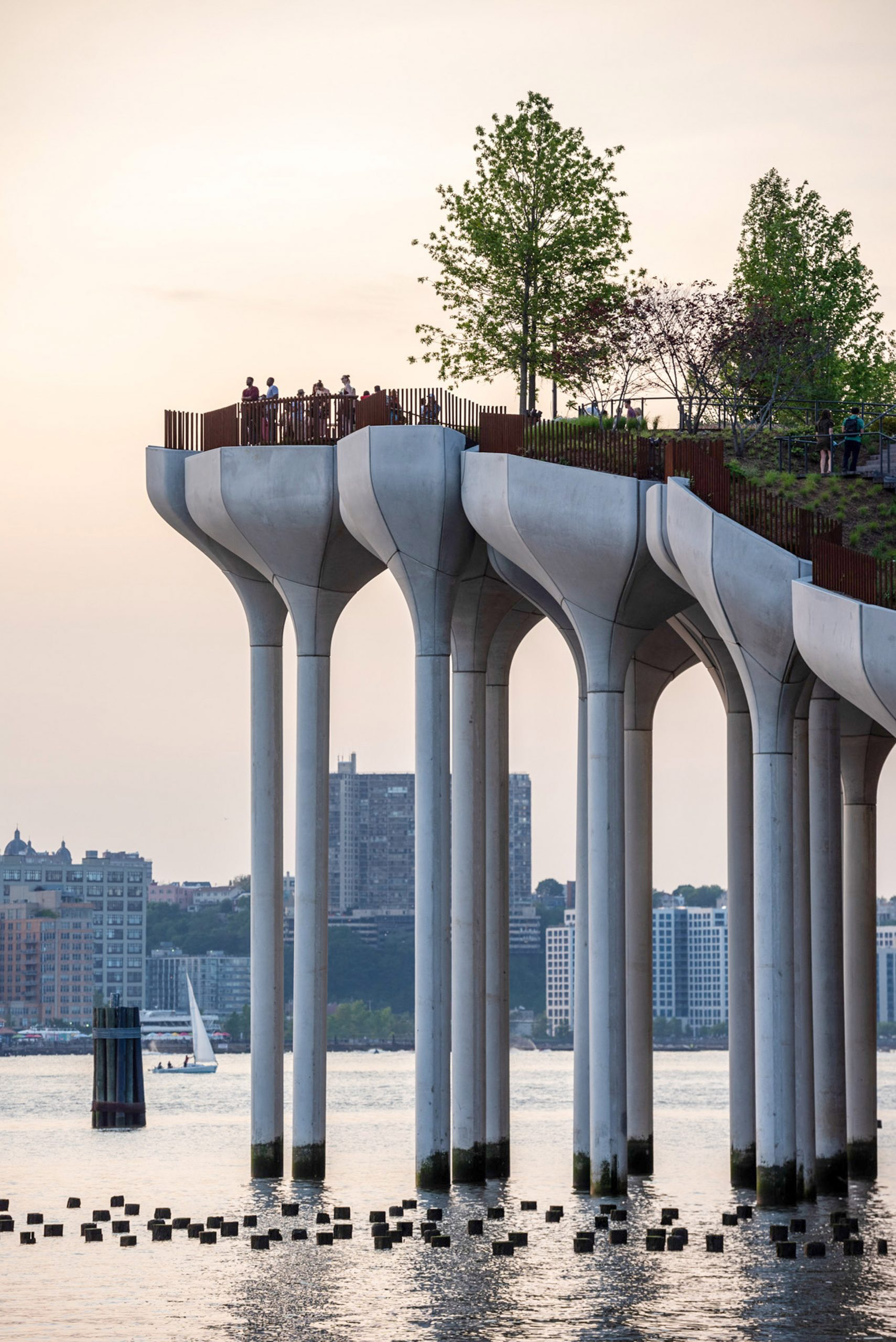