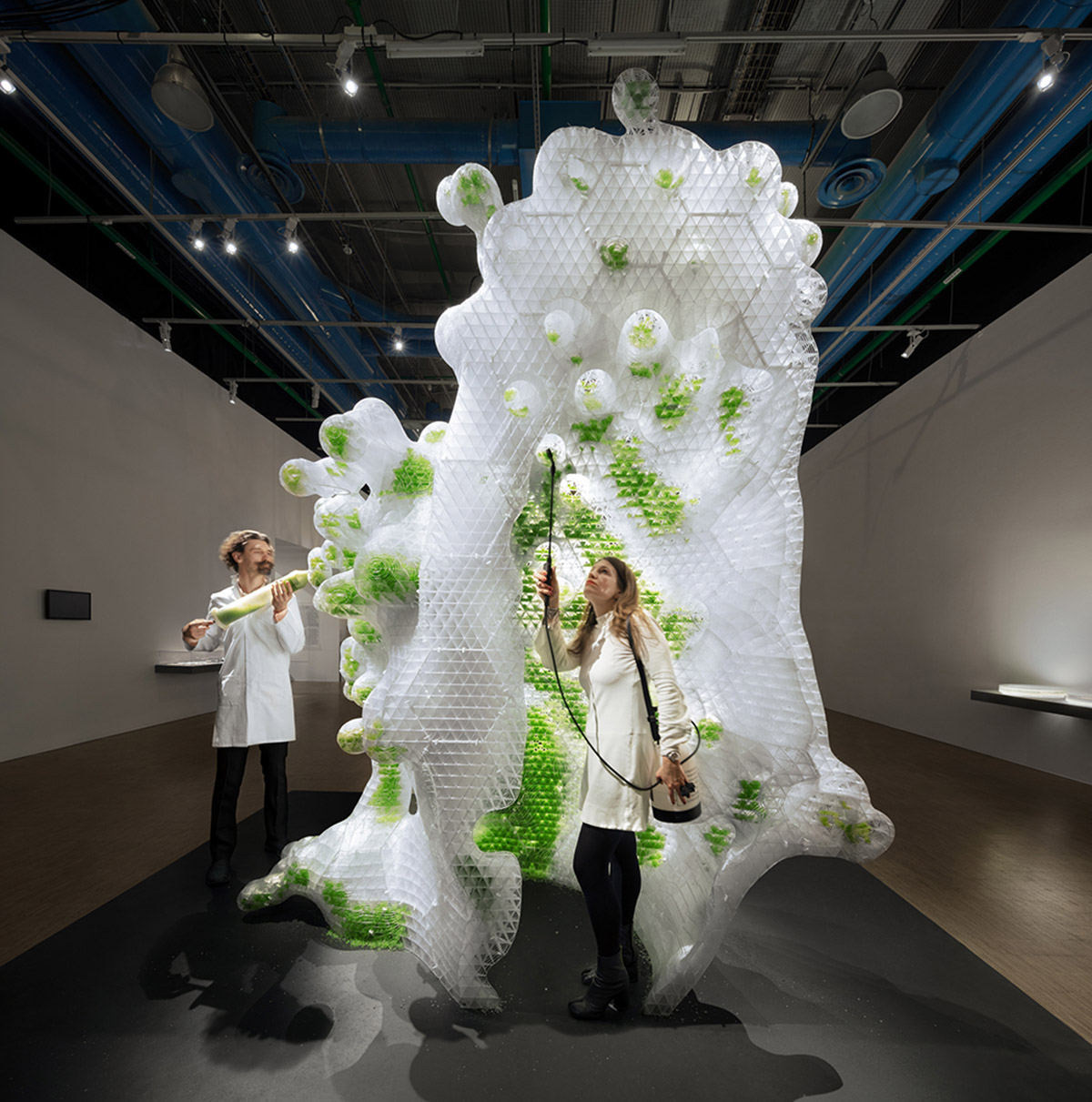 London-based architectural and urban design practice ecoLogicStudio has installed two bio-digital sculptures embody the future forms of spatial intelligence in an exhibition at the Centre Pompidou in Paris between 20 February – 15 April 2019.

The firm, led by Claudia Pasquero and Marco Poletto, collaborated with the Urban Morphogenesis Lab at The Bartlett UCL, the Synthetic Landscape Lab at Innsbruck University, and the Wasp Hub at the University of Southern Denmark, for their exhibition “La Fabrique du Vivant” (The Fabric of the living).

The show, exhibited as part of Mutations-Créations series and curated by Marie-Ange Brayer with Olivier Zeitoun, retraces the archaeology of the living and of artificial life. 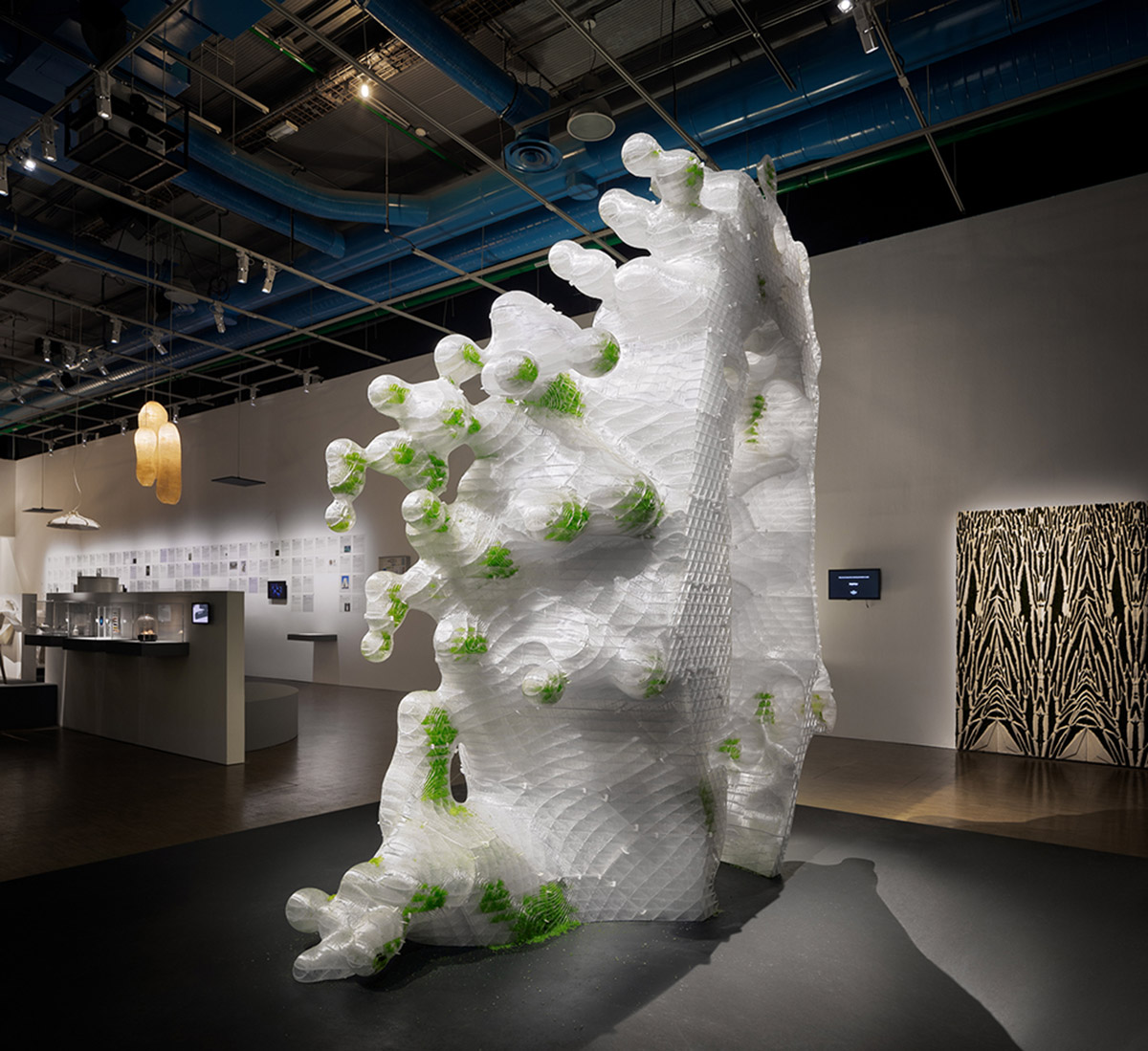 As the curators assert, in the digital era, a new interaction is emerging between creation and the fields of life science, neuroscience and synthetic biology. The notion of “living” takes on a new form of artificiality, that permeates the entire Urbansphere — the global apparatus of contemporary urbanity. 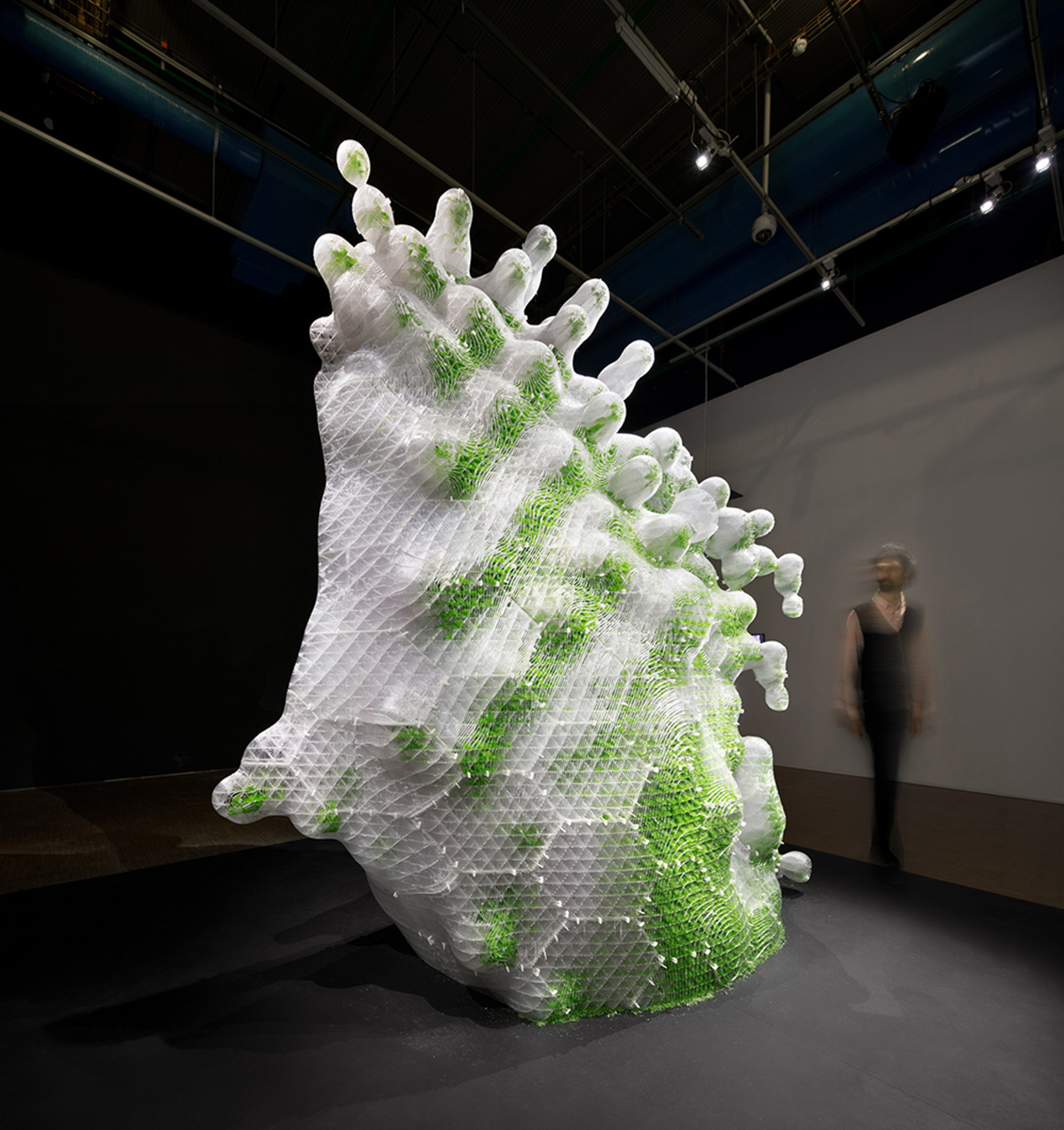 Within this context, a multidisciplinary team led by architects Claudia Pasquero and Marco Poletto, has created “in-human gardens”, two 3D printed living sculptures receptive to human and non-human life. These pieces confront the pillars of human rationality with the effects of proximity to bio-artificial intelligence.

Both sculptures have been developed in "collaboration" with living organisms, more specifically colonies of photosynthetic cyanobacteria, H.O.R.T.U.S. XL Astaxanthin.g, and a collective of Asian Fawn Tarantulas, XenoDerma. 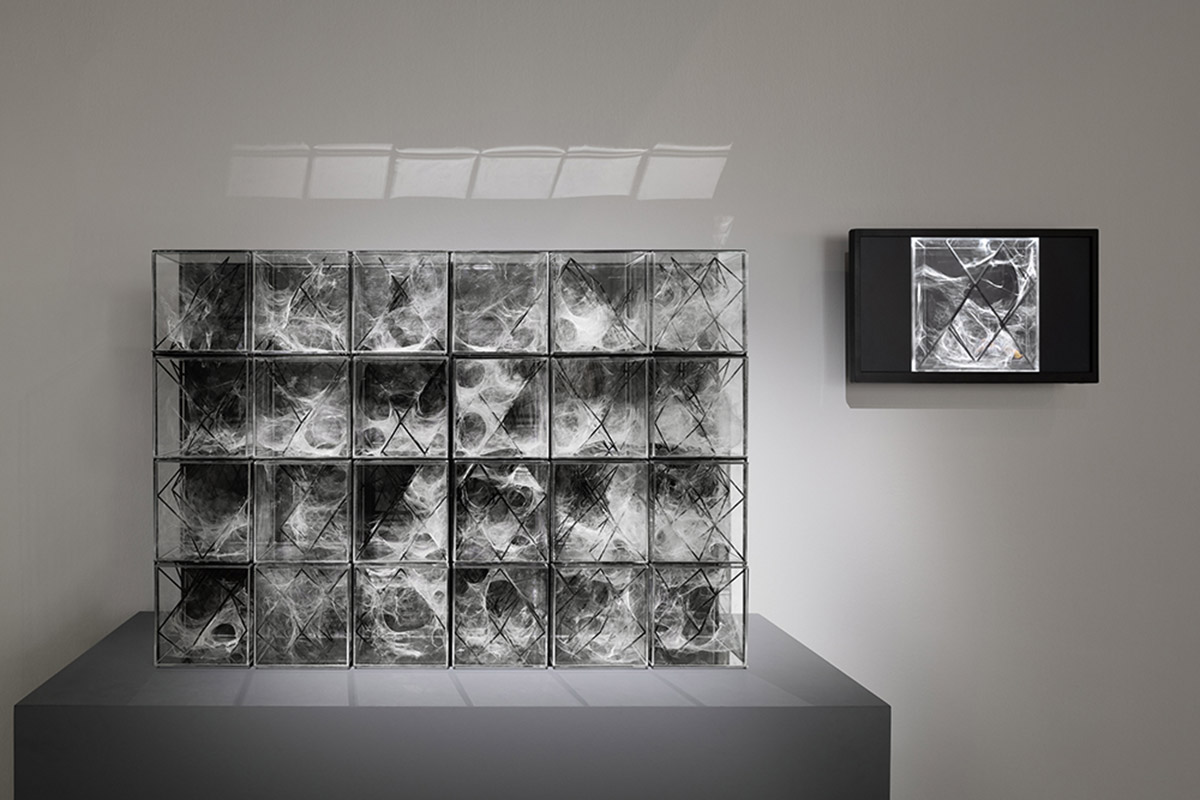 Their non-human agency is mediated by spatial substructures developed by the artists while studying biological models of endosymbiosis. These structures are algorithmically designed and produced by means of large-scale, high-resolution 3D printing technology. 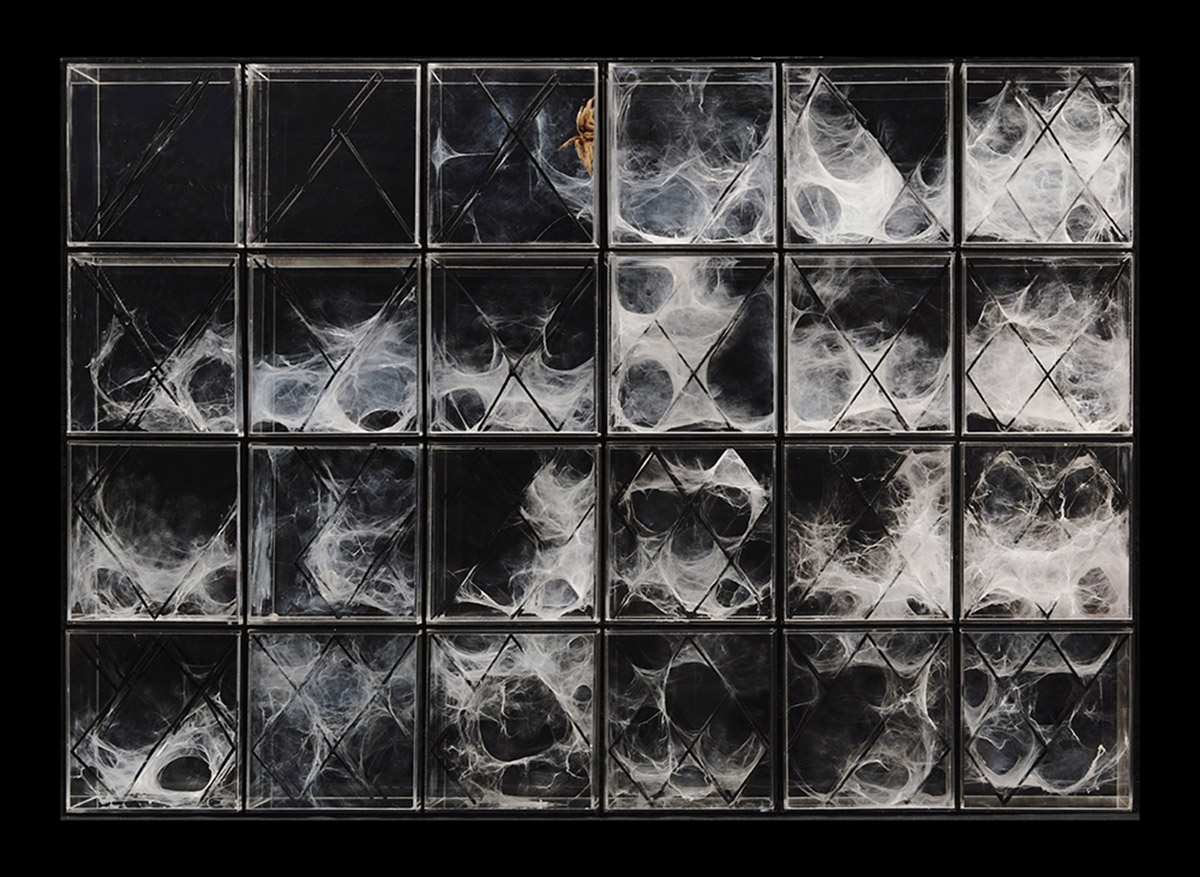 Both sculptural pieces are intended to be speculative 1:1 scale prototypes of living architectures, a new generation of thick biophilic architectural skins receptive to urban life. In H.O.R.T.U.S. XL Astaxanthin.g, a digital algorithm simulates the growth of a substratum inspired by coral morphology. This is physically deposited by 3D printing machines in layers of 400 microns, supported by triangular units of 46 mm and divided into hexagonal blocks of 18.5 cm. 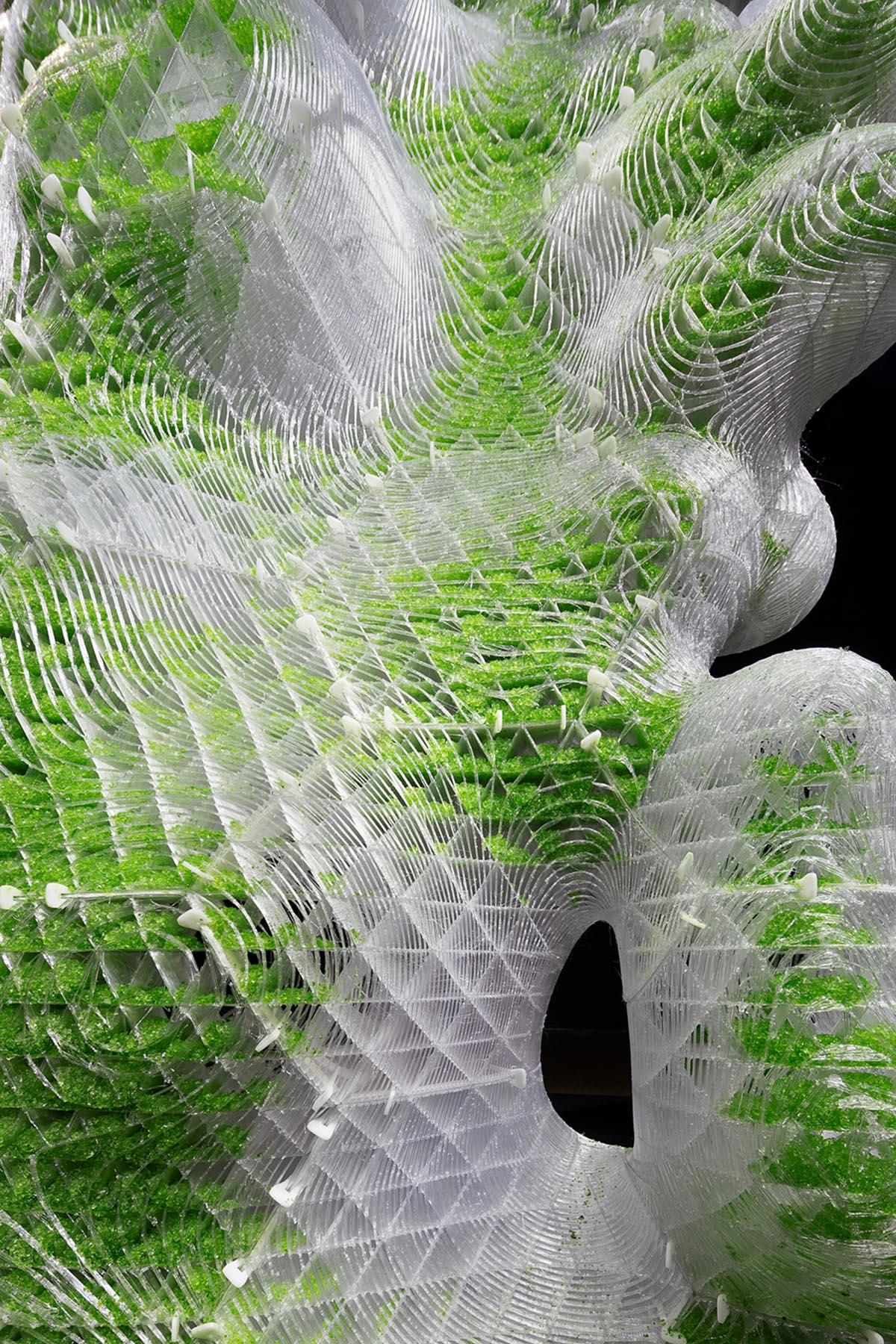 Photosynthetic cyanobacteria are inoculated on a biogel medium into the individual triangular cells, or bio-pixel, forming the units of biological intelligence of the system. Their metabolisms, powered by photosynthesis, convert radiation into actual oxygen and biomass. 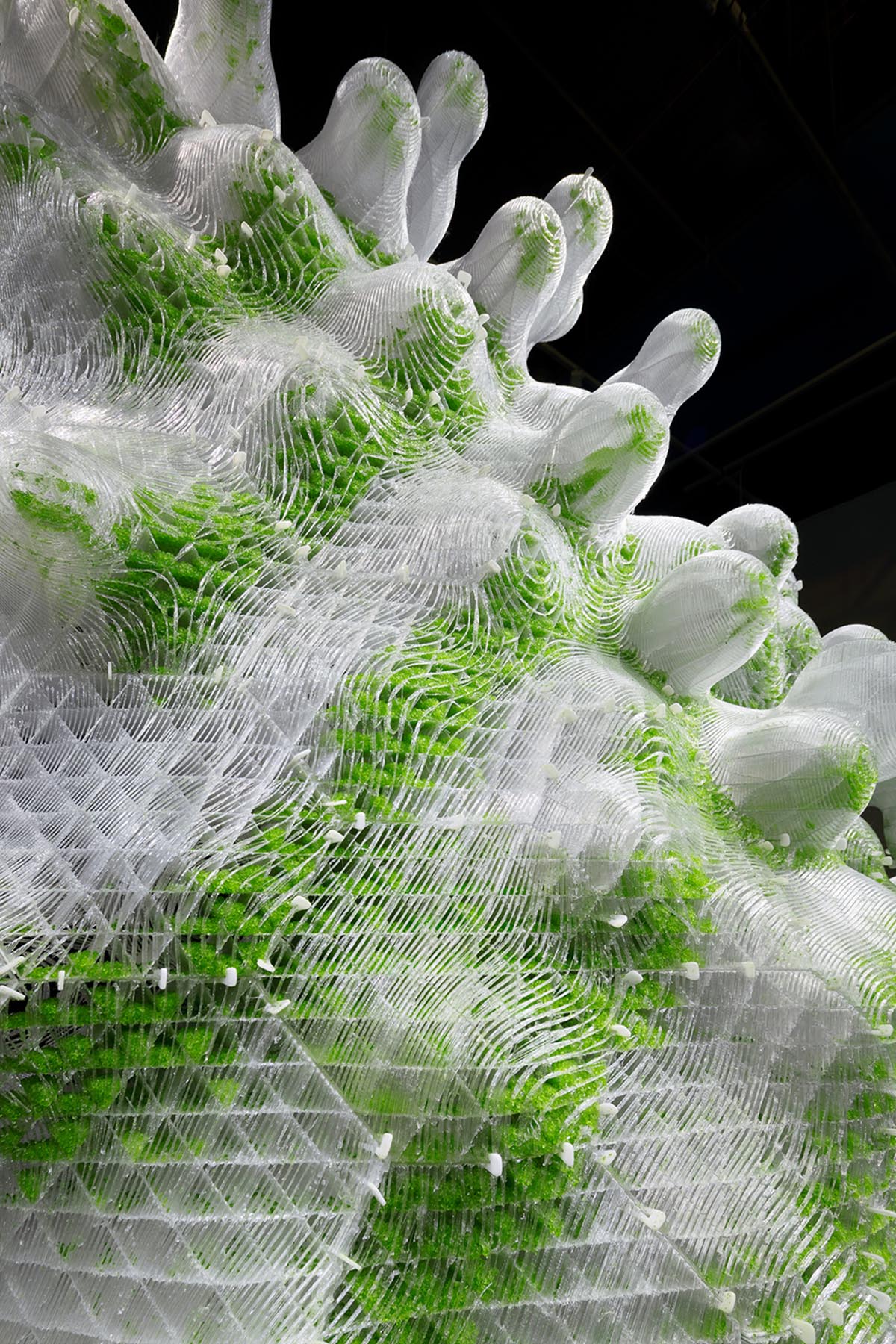 The density-value of each bio-pixel is digitally computed in order to optimally arrange the photosynthetic organisms along iso-surfaces of increased incoming radiation. Among the oldest organisms on Earth, cyanobacteria's unique biological intelligence is gathered as part of a new form of bio-digital architecture. 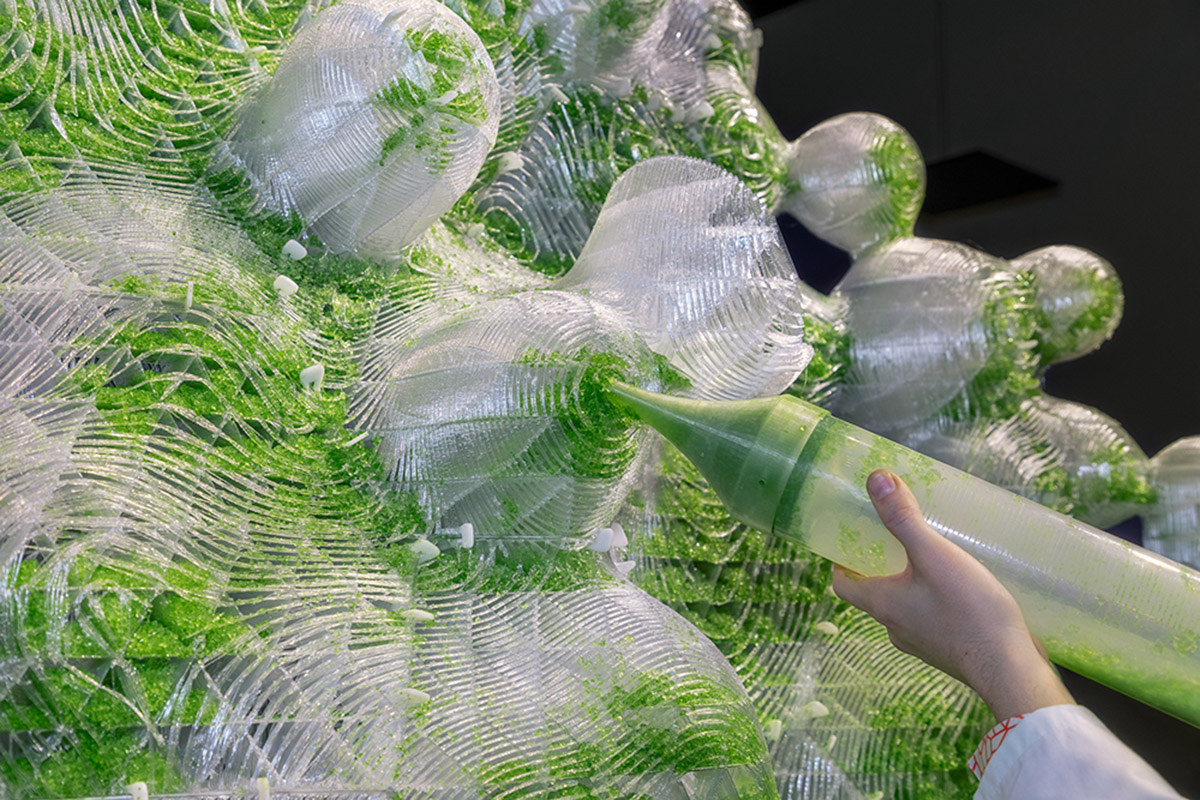 In spring 2019, H.O.R.T.U.S. XL Astaxanthin.g will be exhibited at the MAK – Museum of Applied Arts in Vienna. 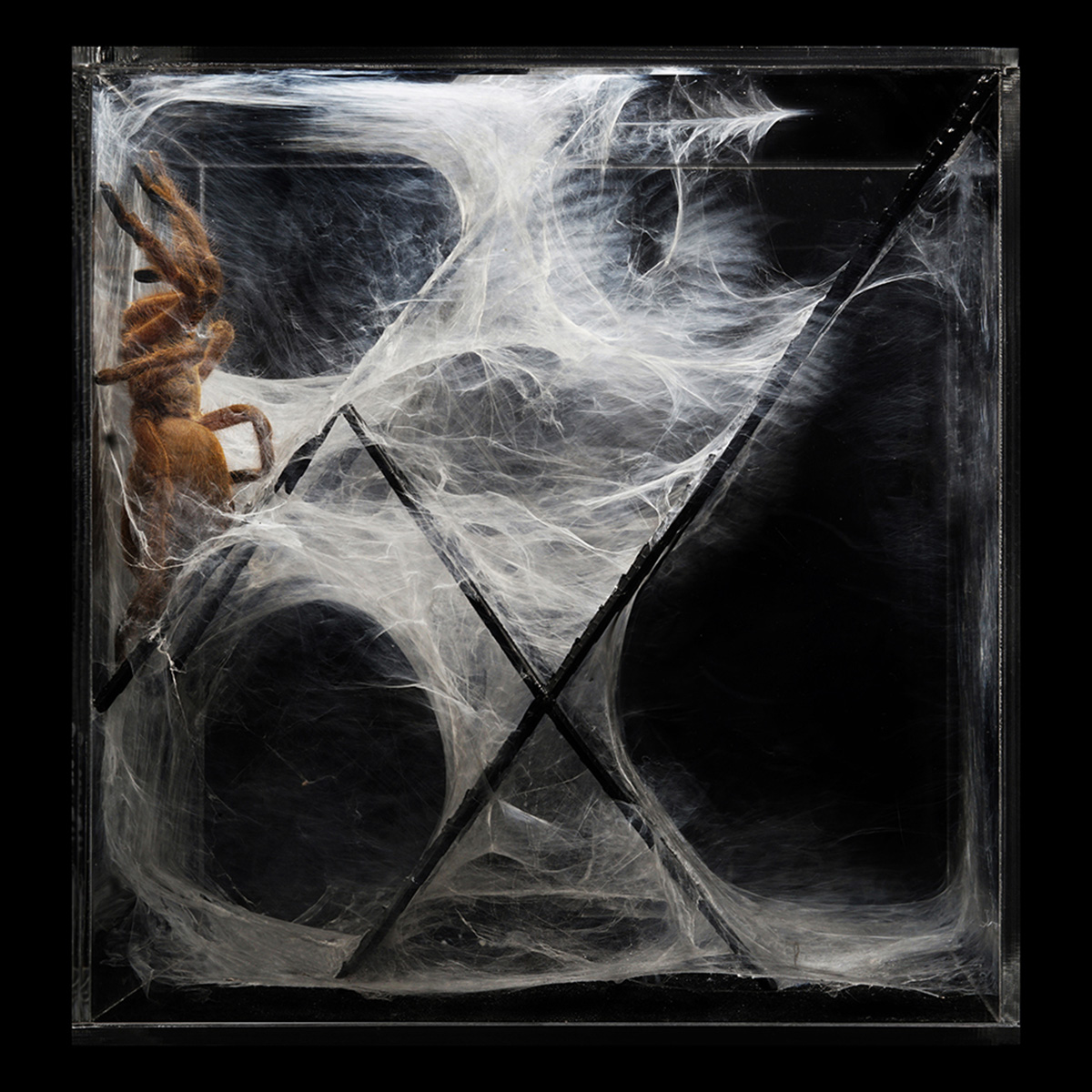 In XenoDerma, spider web morphogenesis is intercepted with a man-made spatial scaffolding, algorithmically designed and 3D printed. Spiders’ minds, in this case Asian Fawn Tarantulas, do not entirely reside in their bodies, as their webs constitute a form of spatial thinking. Information from their webs become an integral part of their cognitive systems. The behaviour of the spiders and the production of silk is re-programmed in XenoDerma through the design of the 3D printed substructure and of its geometrical features.

The result consciously seeks productive ambiguity, revealing in the alien beauty of its silky morphologies, an intelligence that resides somewhere at the intersection of the biological, technological and digital realms. La Fabrique du Vivant [The Fabric of the Living] will be on view between 20 February – 15 April 2019 at the Galerie 4 – Centre Pompidou, Paris, France.

All images © NAARO unless otherwise stated.